How do students shape the future of their cities?

Graz, a UN-preserved city in the south of Austria, has a rich historical background. Its center is still the heart of the city and many different political institutions are arranged around it. There are so many commercial stores on Herrengasse, the main pedestrian street of the city for shopping. However, the beautiful city of Graz experienced something less or more new during the last summer. A rising temperature which most of the citizens have noticed since summer in spite of the mild weather out of the city, was the most important incident that got the municipality’s attention. Jakomini, a neighborhood in the south of the city, was the first district that noticed the Urban Heat Island (abbreviated as UHI) issue and took actions. As a result, they turned to their academic partner in the city, FH Joanneum (The University of Applied Sciences). The task was simple, they wanted their academic partner to come up with new ideas for their neighborhood to cool down the area and reverse the UHI. In turn, the university gave the opportunity to its master students to come up with new ideas ranging from the most practical to the most avant-garde and futuristic ideas. The project was leaded and guided by Thomas Lettner and Anke Strittmatter from the department of architecture of FH Joanneum. They wanted the senior students of the master degree to cooperate and solve a tangible problem in the city which they are living in. 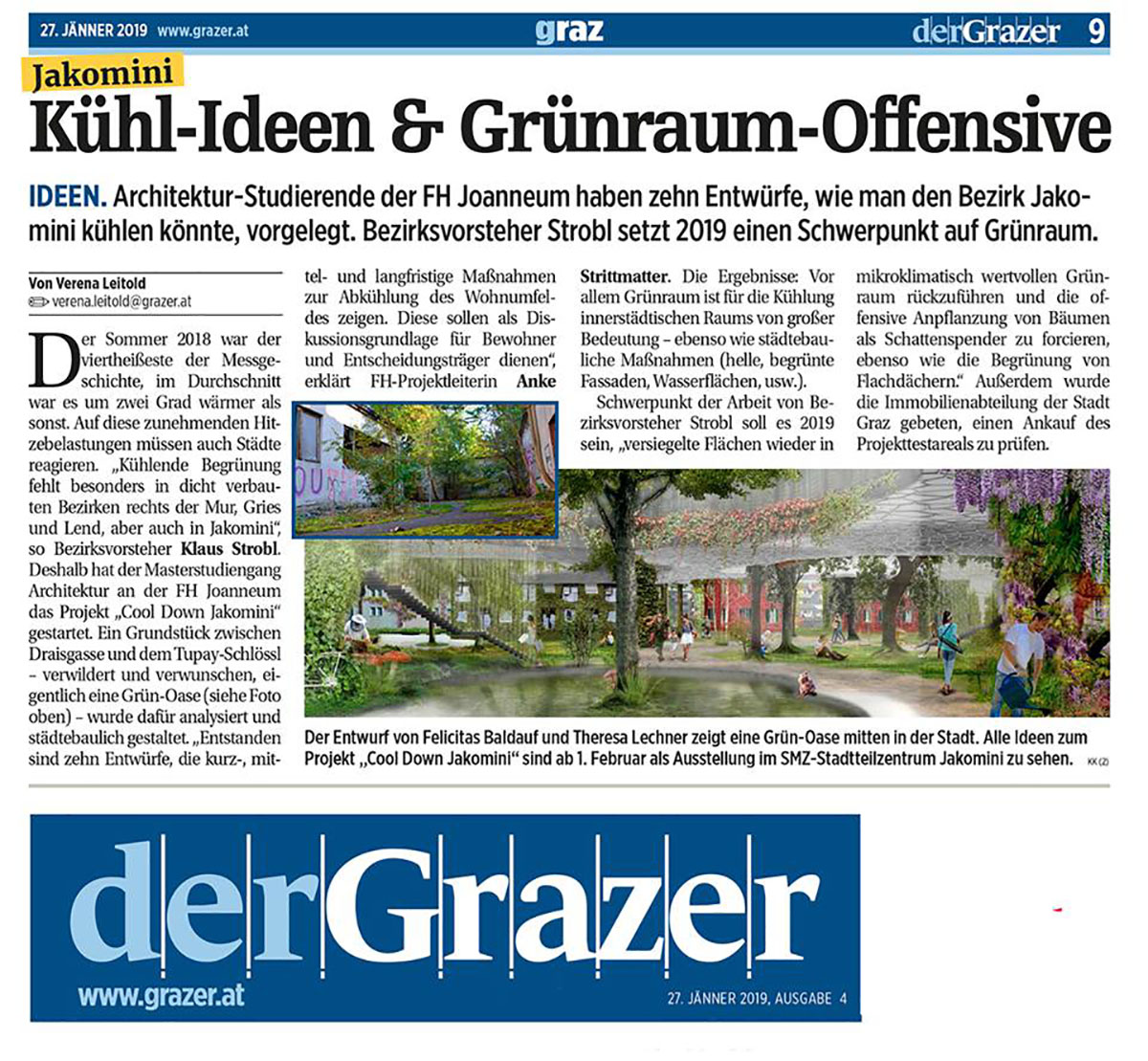 Der Grazer: A local newspaper that covers the news about the design. Image courtesy of der Grazer. 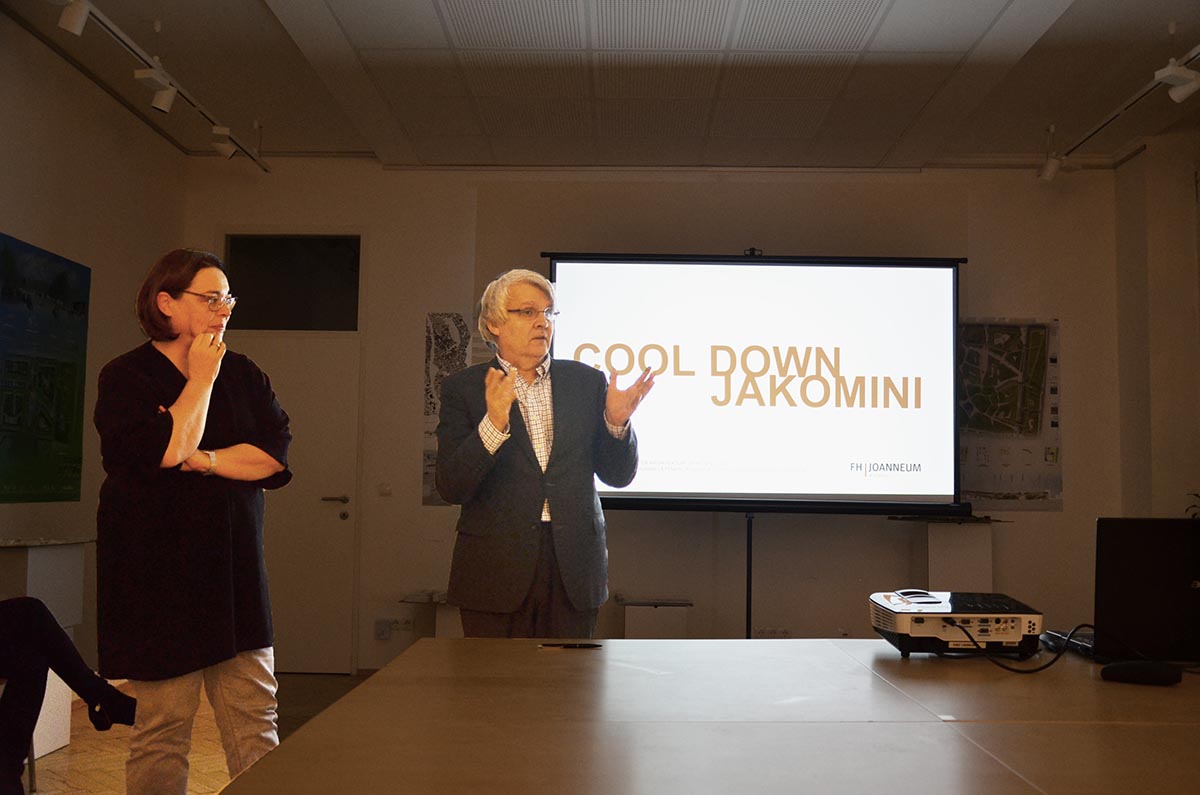 The head of the municipality and Anke Strittmatter addressing the audience about "Cool Down Jakomini". Image Courtesy of Cafe Jakomini.

The professors addressed the issue in a conversation as follow:

"This summer has shown it particularly well. The climate has changed. Cities have to react to this, so that they remain quality habitats for humans - or become so again. The increasing sealing by housing and roads reduces the green areas. This, in turn, increases the heat in the city on the one hand in midsummer, on the other hand, it also damages the groundwater balance: as we all know, there is no water in the soil that can be seeped into the soil. Therefore, the green space security and creation since 2014 is part of the Graz urban development concept." 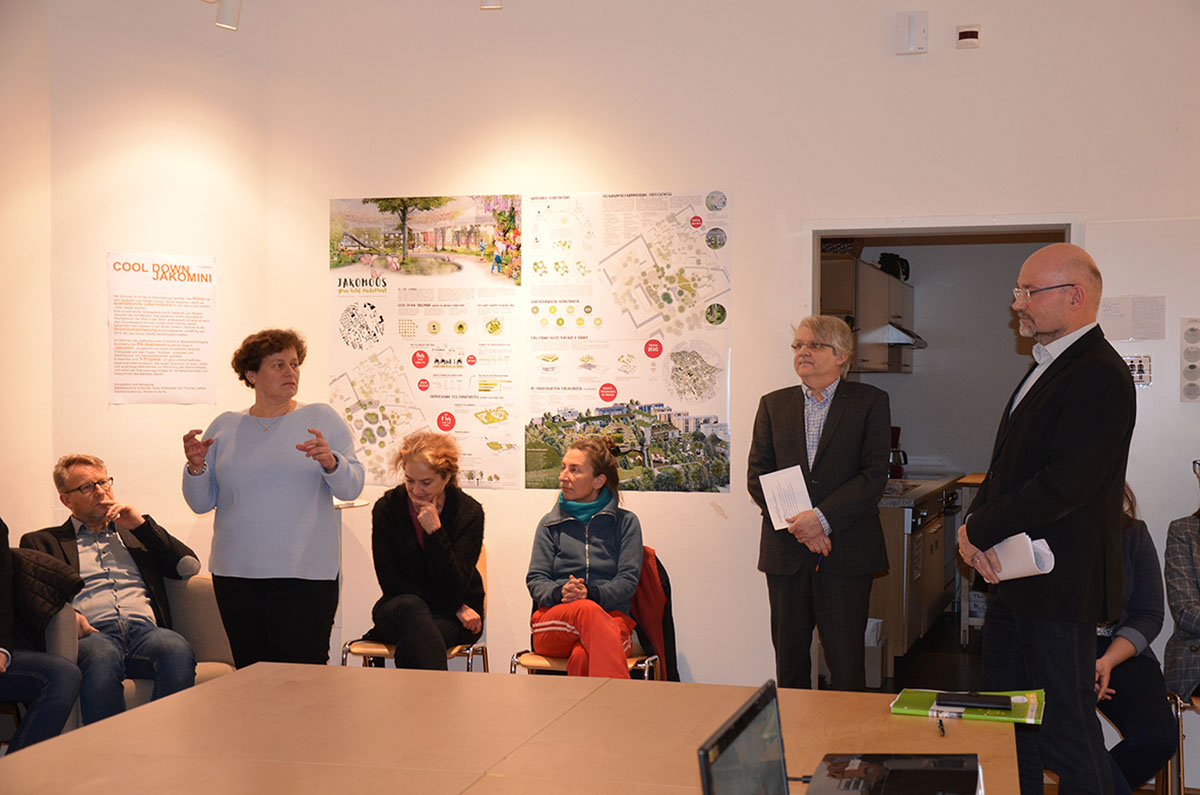 The municipality's officials talking over the two students' project and presentation. Image courtesy of Cafe Jakomini.

They continued on the UHI and the Mur, a river that passes through the city:

"Greening is missing especially in densely built-up districts right of the Mur, Gries and Lend, but also in Jakomini. The further away from the city center, the better the existing location. Especially Jakomini is considered a "heat island", although the district with the Augarten already has a green retreat area." 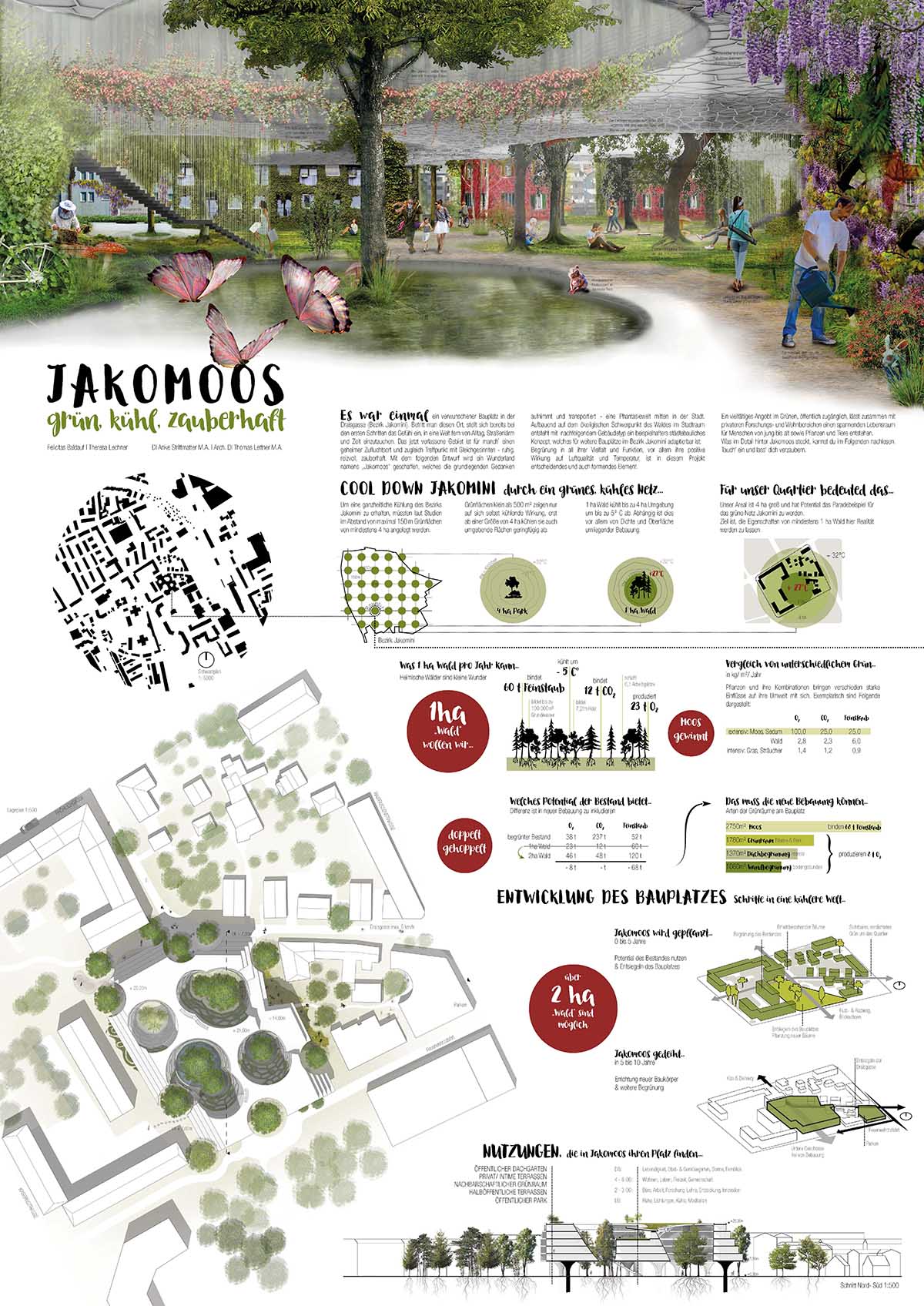 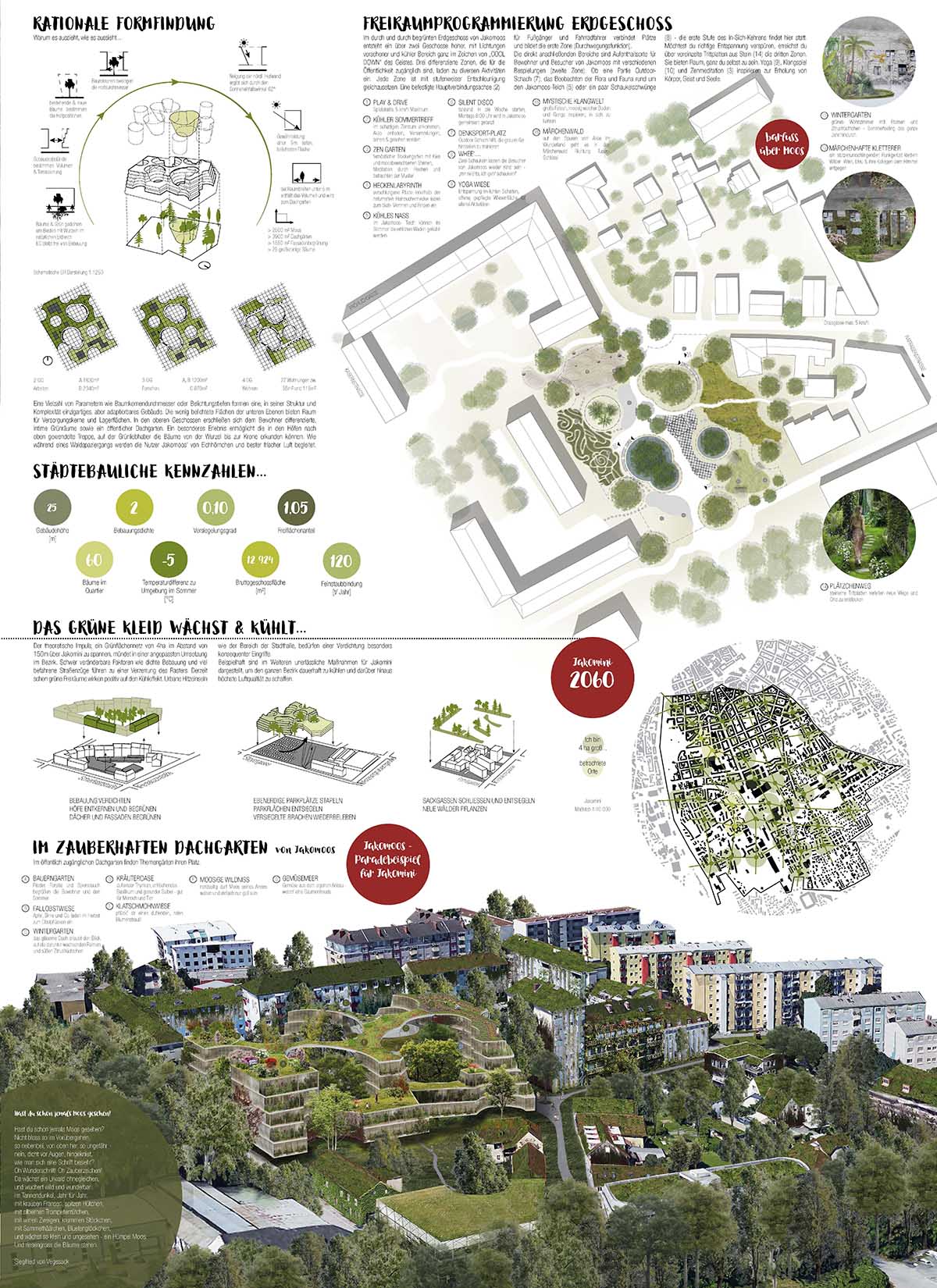 Designing in an urban area needs significant attention and care, in this case, the professors came up with the detailed analyses of the urban area and supervised the students in carrying out the tasks.

"To describe this "urban structure" the necessary special vocabulary or jargon should be used. Specific forms of construction are to be classified, uses identified and allocated or path connections and open spaces quantified and qualified -­‐ to name just a few factors.

On the basis of the stocktaking and the evaluation of the selected urban fields, the interactions, and dependencies that determine the urban overall structure and its individual parts are to be recorded and the possibilities of the changes discussed.

This kind of urban inventory is a "commercial" and demanded "product". The mapping of a city square serves as a preparation for decisions and as a basis for development planning." 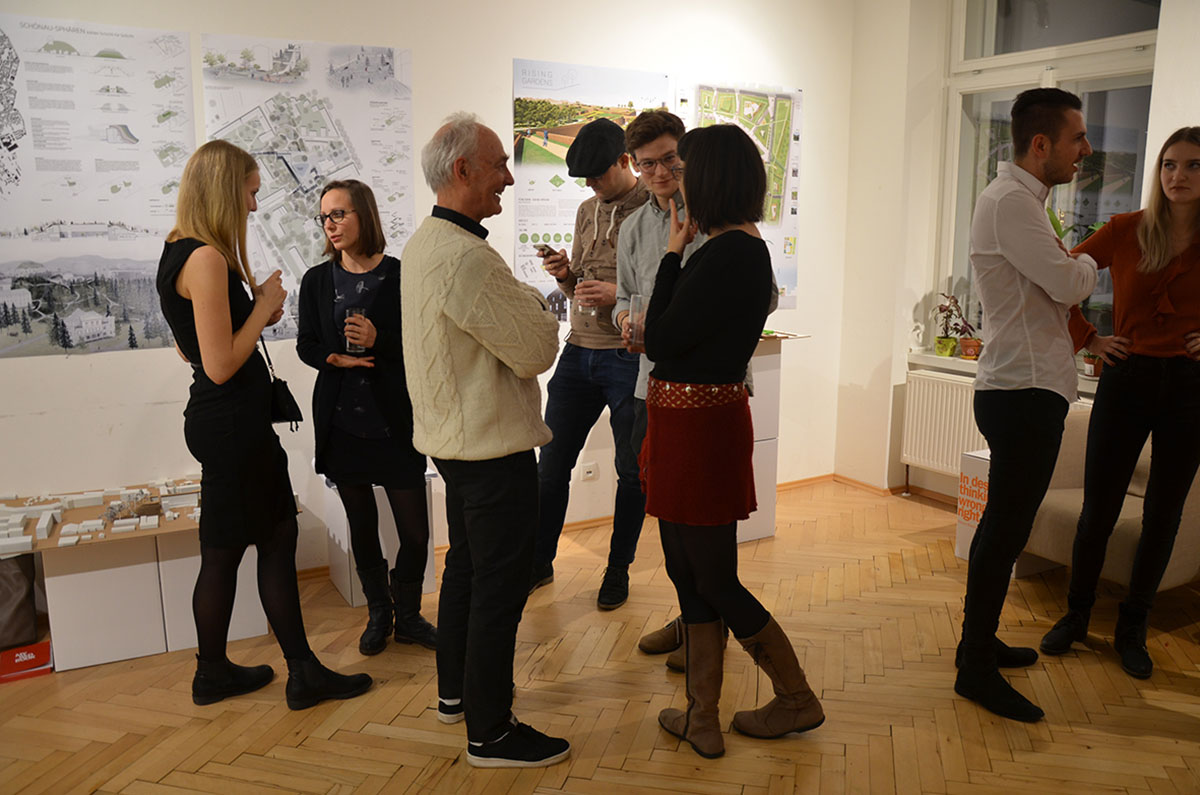 The municipality's officials negotiating over a project with its architects. Image courtesy of Cafe Jakomini.

Urban areas are usually large scale projects and studying them takes special considerations. These studies are a vital part of any urban project prior to any intervention. It is important to consider all the social, economic, and environmental aspects.

"The examination field can vary greatly. Depending on the topic, it is not limited to the existing area. For example, in the case of an investigation of the traffic, it is necessary to indicate the location of the city center or the distances to the nearest station or airport." 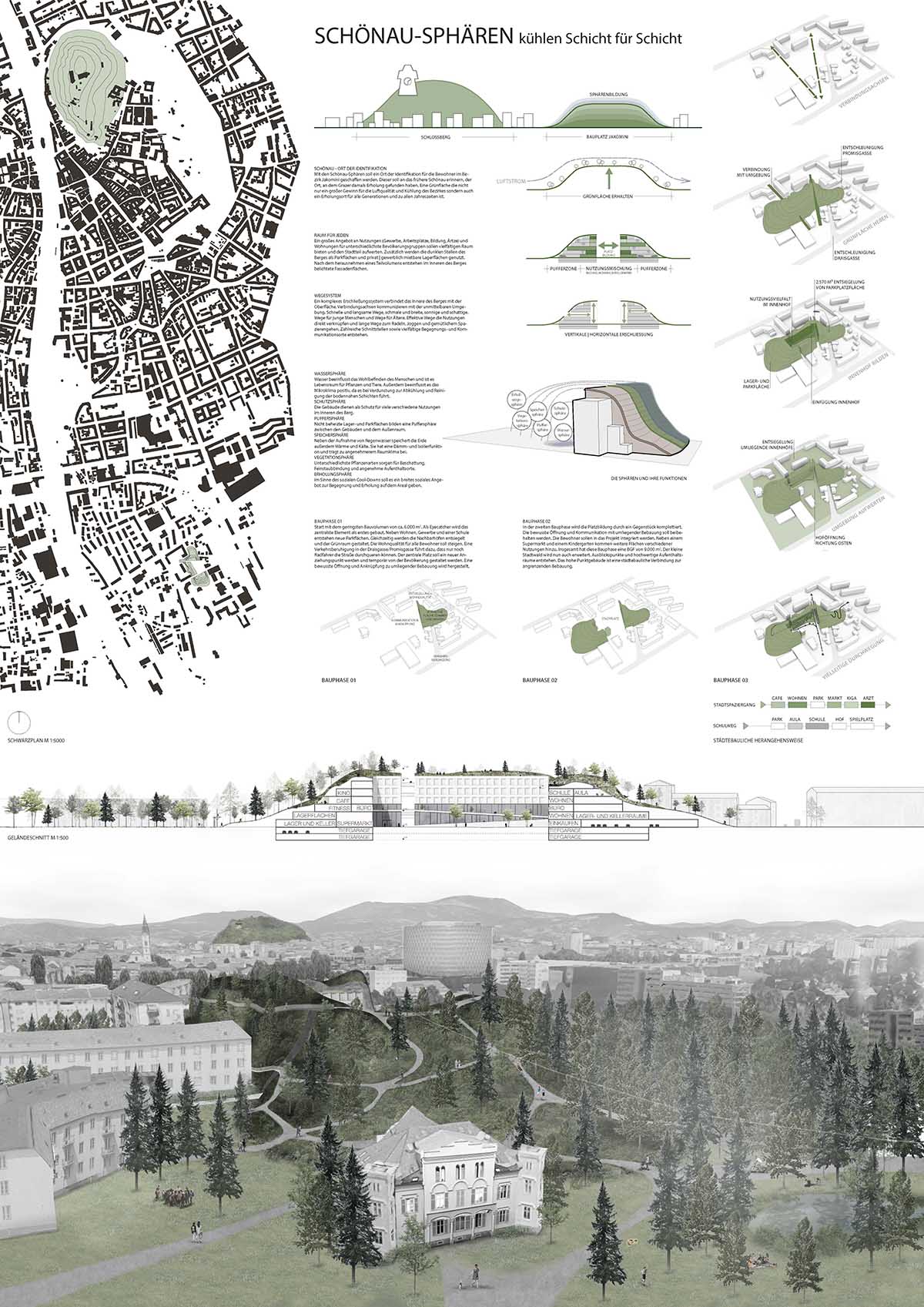 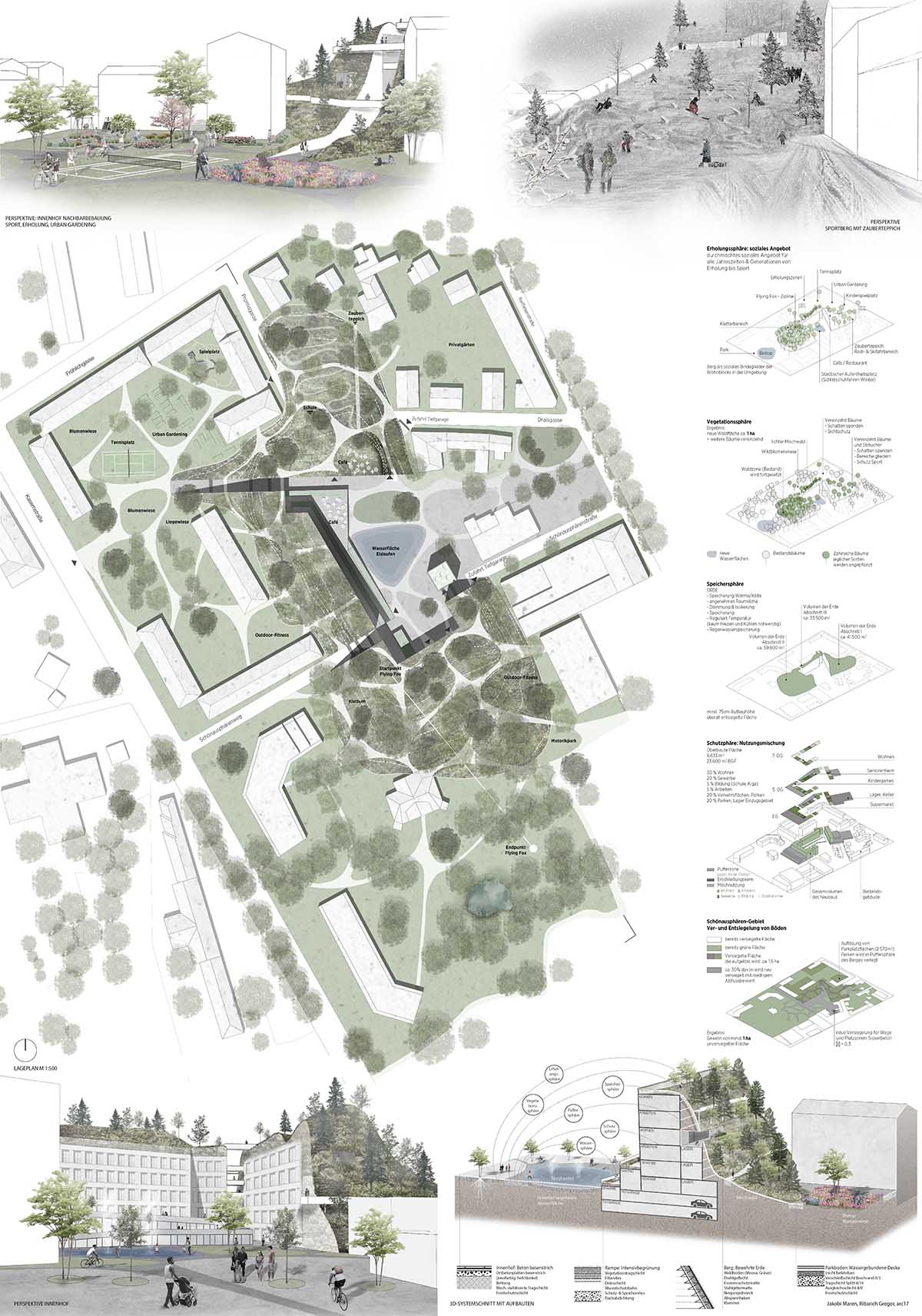 All these guidelines and studies on the urban area resulted in projects with the theme of “Cool Down Jakomini”. The students used the background study and analyses to define the guiding principles of their designs, all aiming at cooling down the area. The results varied significantly, some designed futuristic concepts that can be carried out later on in the area and some came up with practical ideas that can be constructed not that far off. They mostly provided a vision for Jakomini and tried to come up with a time table for the project according to the background studies and the help of the municipality. 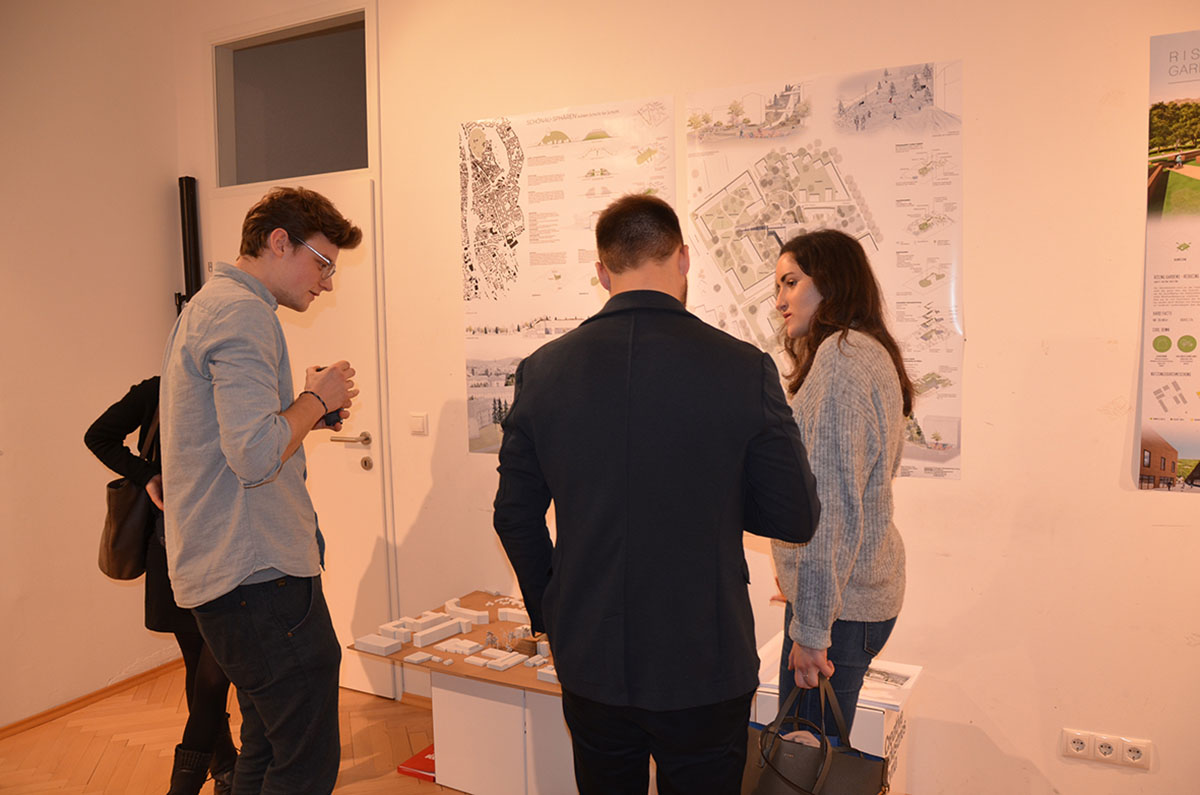 The municipality's officials negotiating over a project with its architects. Image courtesy of Cafe Jakomini

However, all these come to effect when they are taken into account for the future of the city. Fortunately, the project was ordered by the municipality itself and the whole organization was welcoming the projects at the end. There was a final presentation in front of the mayor and employees who were considering every single project for the future of the neighborhood and had in some cases long conversations with the architects of the projects over their designs. Also, many professors from different institutions as well as Tanja Psonder, FH Joanneum's Head of the Department of Architecture, were present along with some citizens of the neighborhood. But the most important thing was the fact that students were invited to shape the future of their city and they have become a part of the future.

You can see Cafe Jakomini in detail and read details about the event.