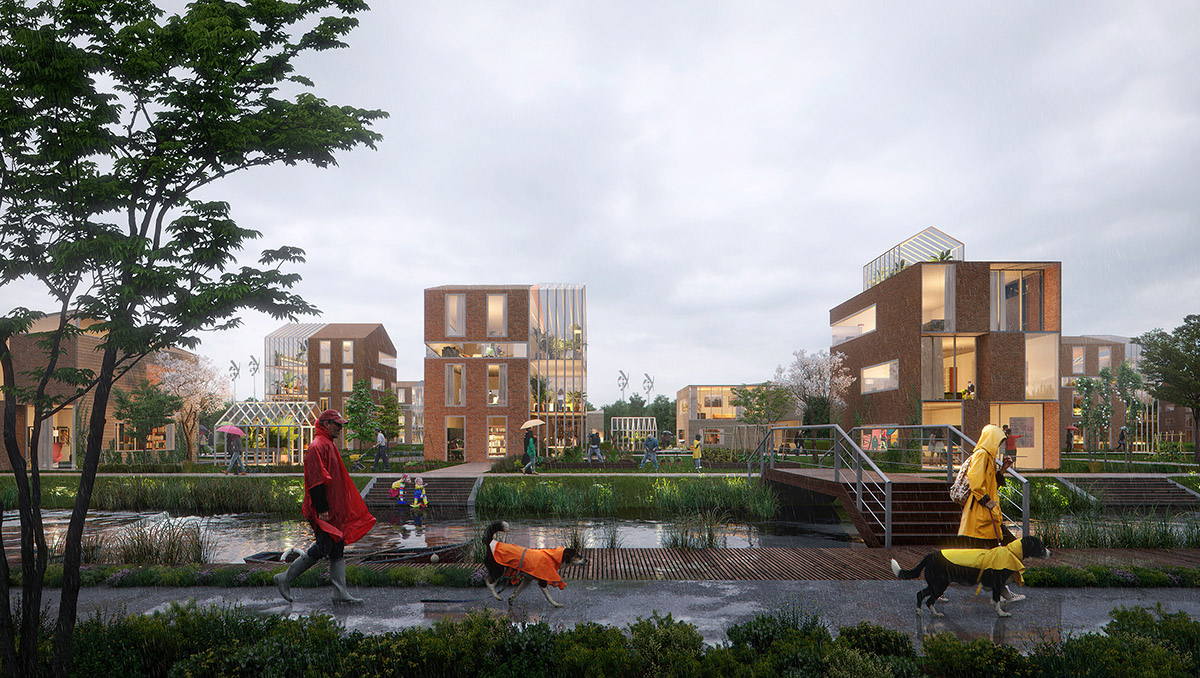 UNStudio has proposed a new urban vision for "the smartest neighbourhood in the world", which is currently being developed in Helmond’s Brandevoort District in the Netherlands.

Rather than as a pre-determined fixed plan, UNStudio’s urban vision incorporates a flexible grid that is developed per the users’ demand. The new neighbourhood is planned based on the latest insights and techniques in the areas of circularity, participation of (future) inhabitants, social cohesion and safety, health, data, new transport technologies and independent energy systems. All of these facets will contribute to the creation of a sustainable and unique living environment: Brainport Smart District (BSD). 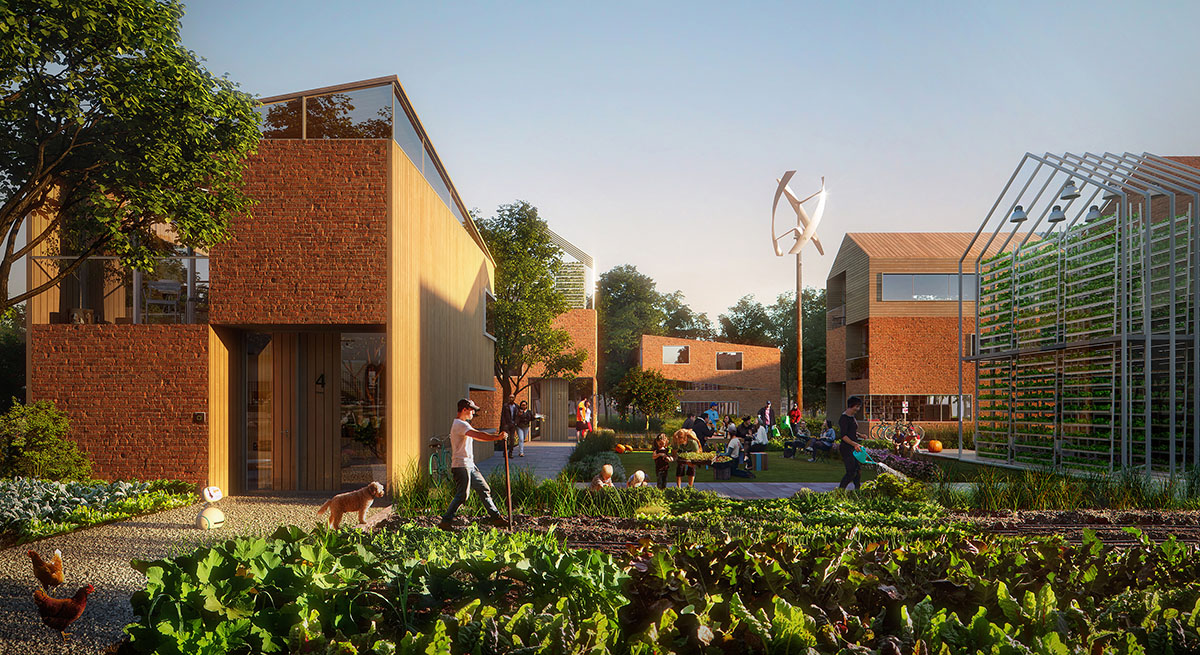 The development will be characterised by the application of the latest technologies and knowledge in order to achieve a sustainable, circular and socially cohesive neighbourhood that enjoys joint energy generation, food production, water management, joint digital data management and revolutionary transport systems. 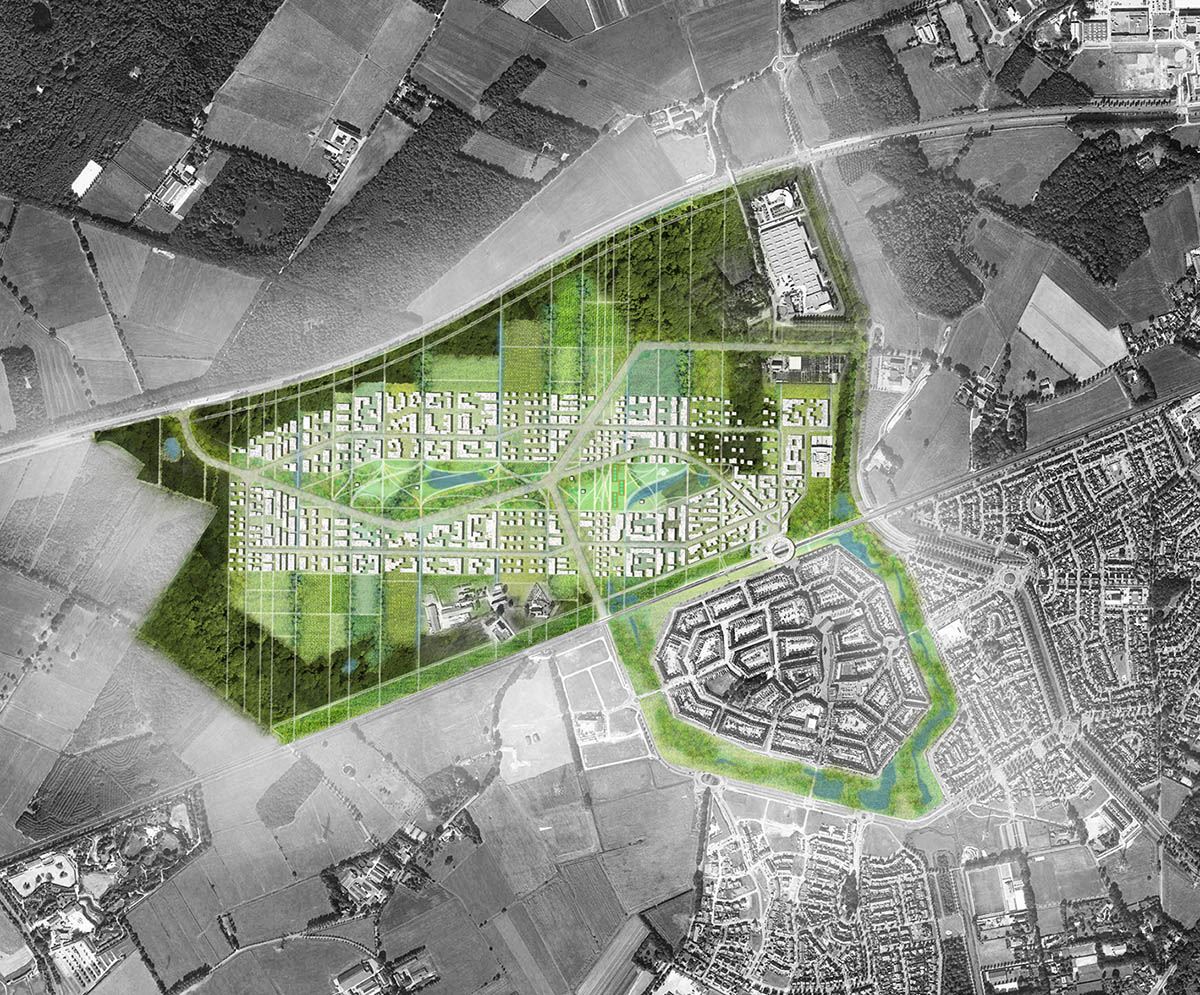 In July 2018, UNStudio was selected to put together a team in order to translate the ideas for the Brainport Smart District into a spatial plan. The resulting urban vision was created in a collaboration between UNStudio (project lead and urban planning) and Felixx Landscape Architects & Planners,  (ecology and landscape), Metabolic (Circularity and climate adaptation), Habidatum (data analysis) and UNSense (Data and technology strategy).

BSD is conceived as a ‘living lab’: a mixed residential neighborhood organised around a central park and surrounded by business spaces and natural reserves. The district aims to develop a new relationship between buildings and landscape, whereby both strengthen each other qualitatively. The landscape is used as a productive environment for food, energy, water, waste processing and biodiversity. 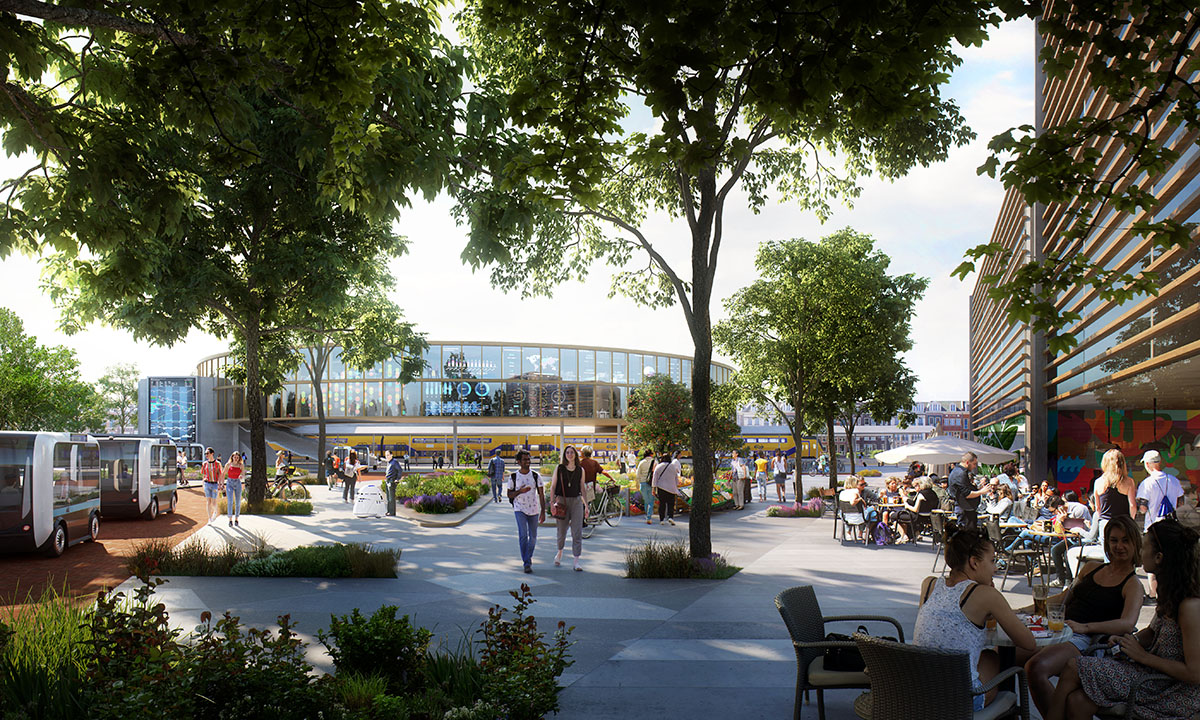 "Unlike most developments however, BSD will not be designed first and built afterwards. Instead, design and construction will go hand in hand with step-by-step development," explained UNStudio.

"This new district aims to contribute to the creation of a sustainable and unique living concept, one which embraces experimentation and ‘learning by doing." 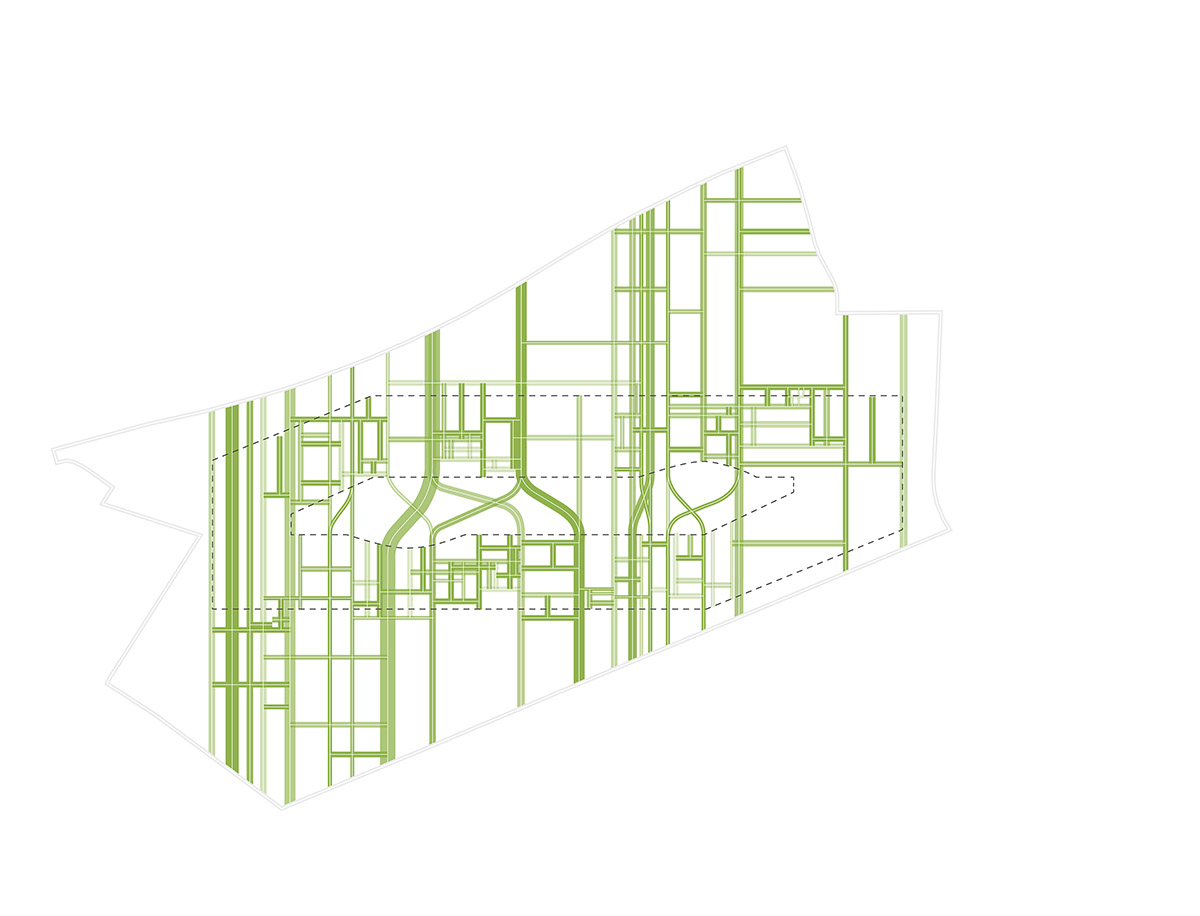 The total surface of Brainport Smart District will cover 155 hectares: bigger than 320 football fields. UNStudio’s urban plan offers maximum opportunity for growth with a flexible framework of incremental density. Factoring future economic and social flux, the site is parcelled into a series of strips (from north to south) that demarcates the district into ten parts, offering a diversity of urban and landscape densities and use. 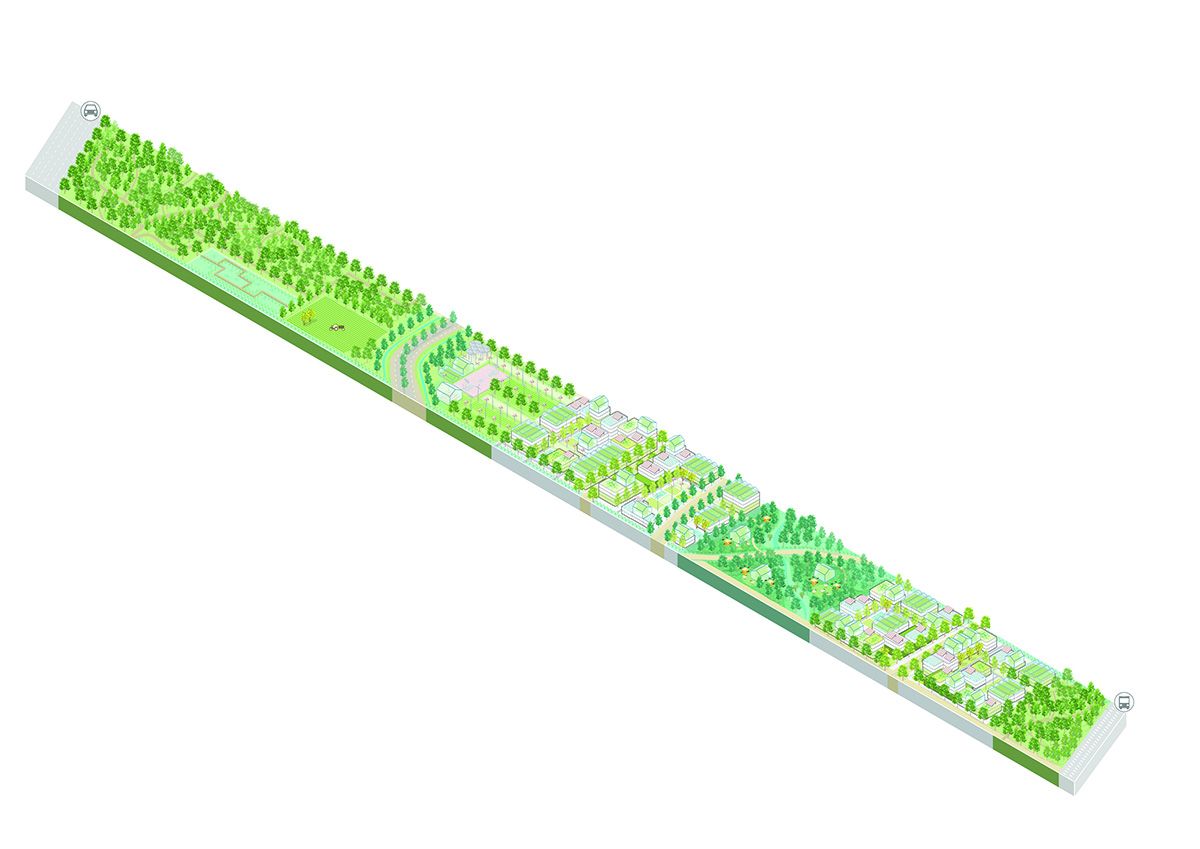 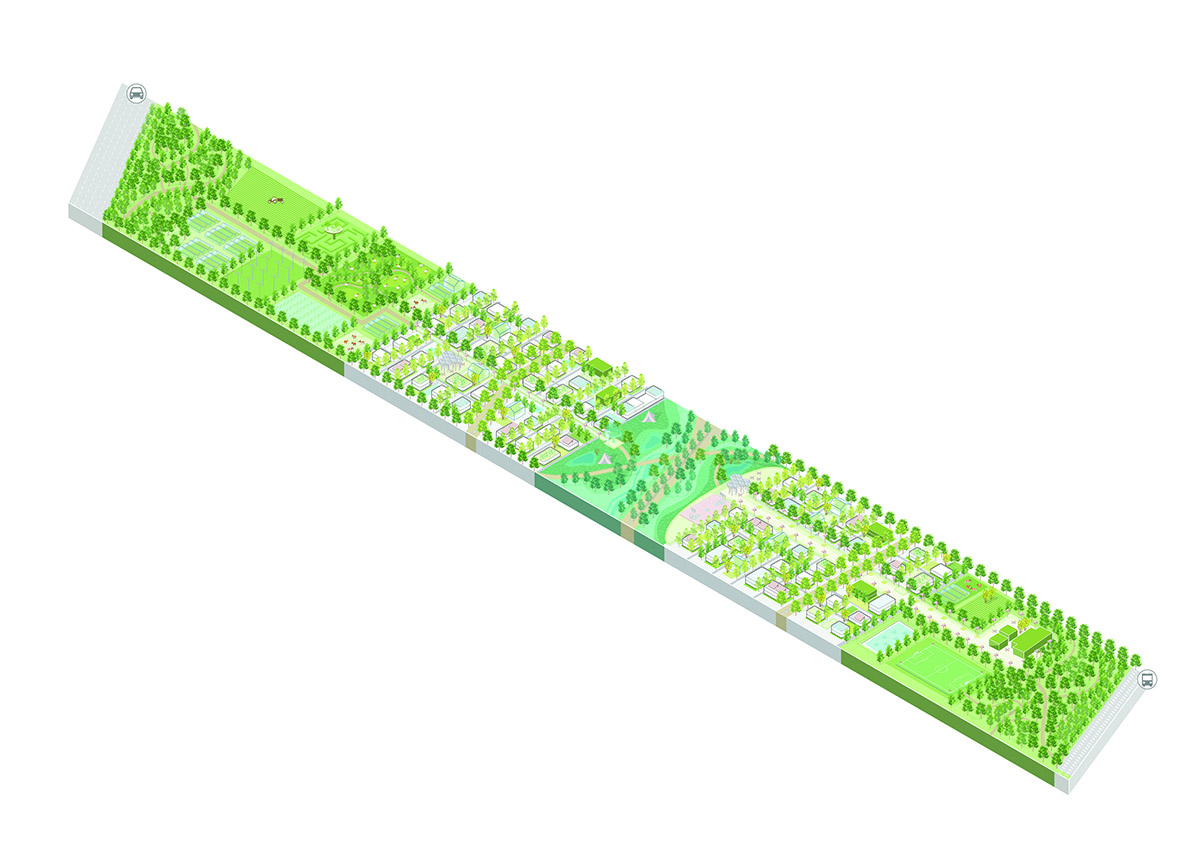 Rather than as a pre-determined fixed plan, UNStudio's urban vision describes a flexible grid that is developed per the users’ demand. Both urban development areas and nature areas are perceived as productive spaces, where a mix of living, working and leisure is facilitated. A shared-owned central park forms the active social heart of the District where all residents share healthy activities and cultural programmes. 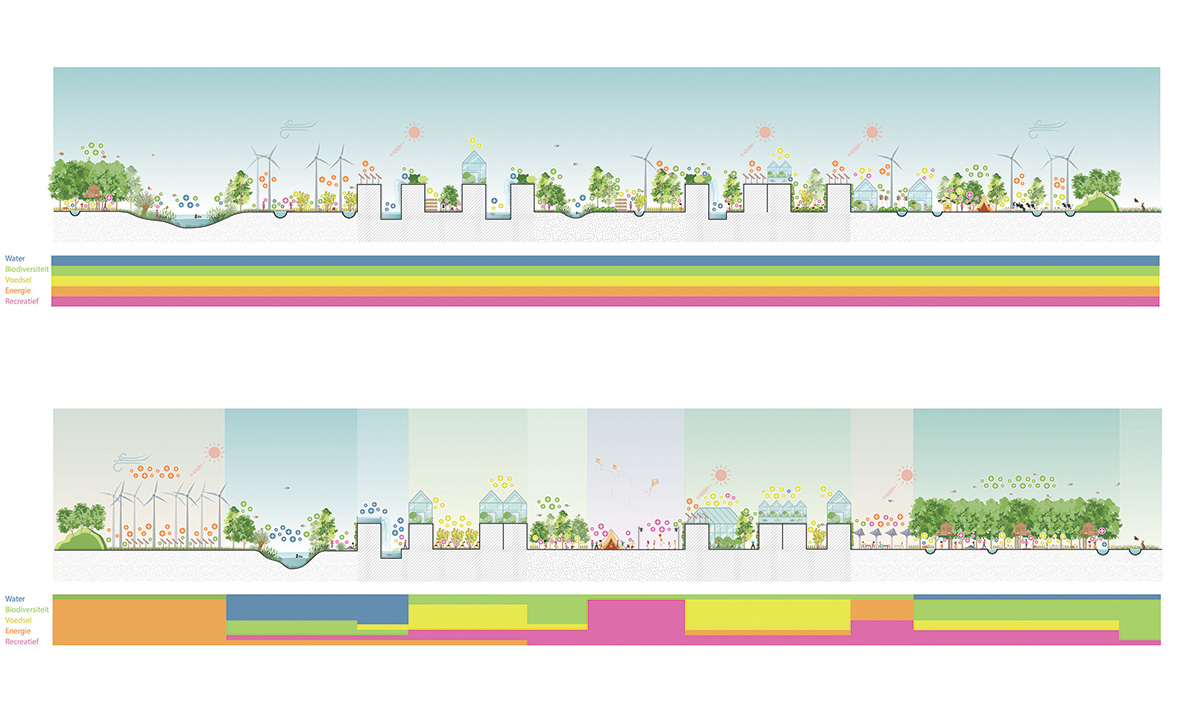 Plans will propose a Community of Innovators

Catering to new local and international users, Brainport Smart District is seeking early adopters of new ways of living and working. Residents are encouraged to adopt communal resource schemes such as shared energy generation and land cultivation, while businesses will primarily be those that focus on innovative research fields. The productive urban environment and landscape will generate a local economy that is specifically ‘Made in BSD’. 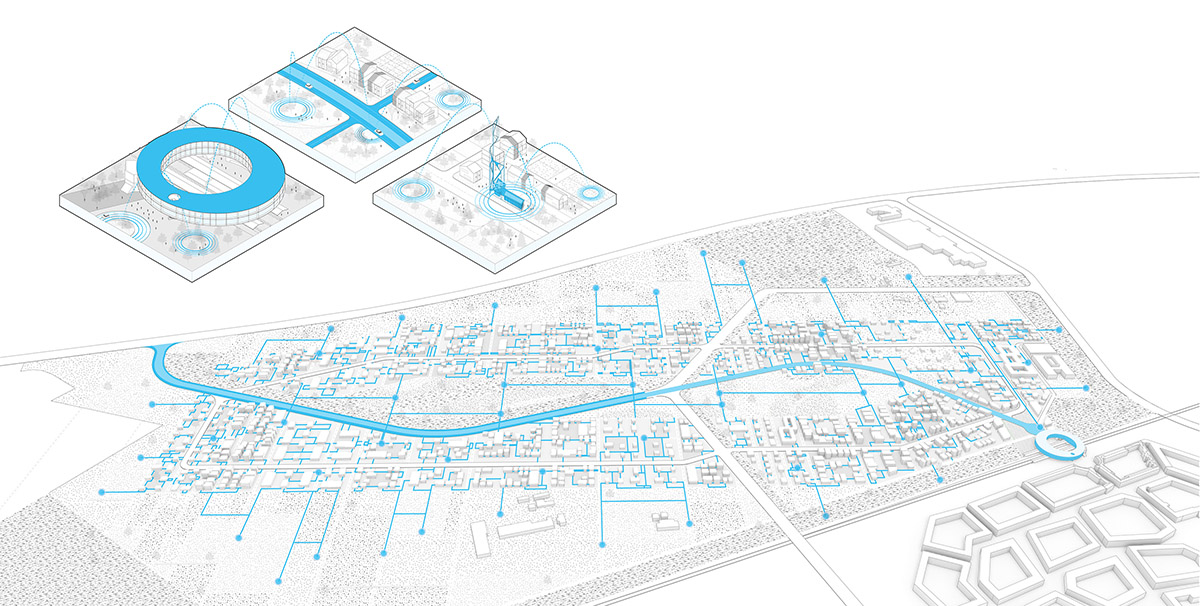 UNStudio’s vision translates BSD’s high ambitions regarding climate adaptation and circularity into a framework that ensures that ecologic, social and economic sustainability are within reach. Incorporating circularity early in the process provides the opportunity to harness synergies between innovative solutions on different scales. Brainport Smart District sets a new standard for area development by integrating circular standards for not only materials, energy and climate adaptation, but also for biodiversity, human health, and new economic opportunities.

BSD’s technology universe is introduced as a framework for sharing data and information in order enrich the efficiency of the landscapes, buildings and public spaces, while offering seamless connectivity. 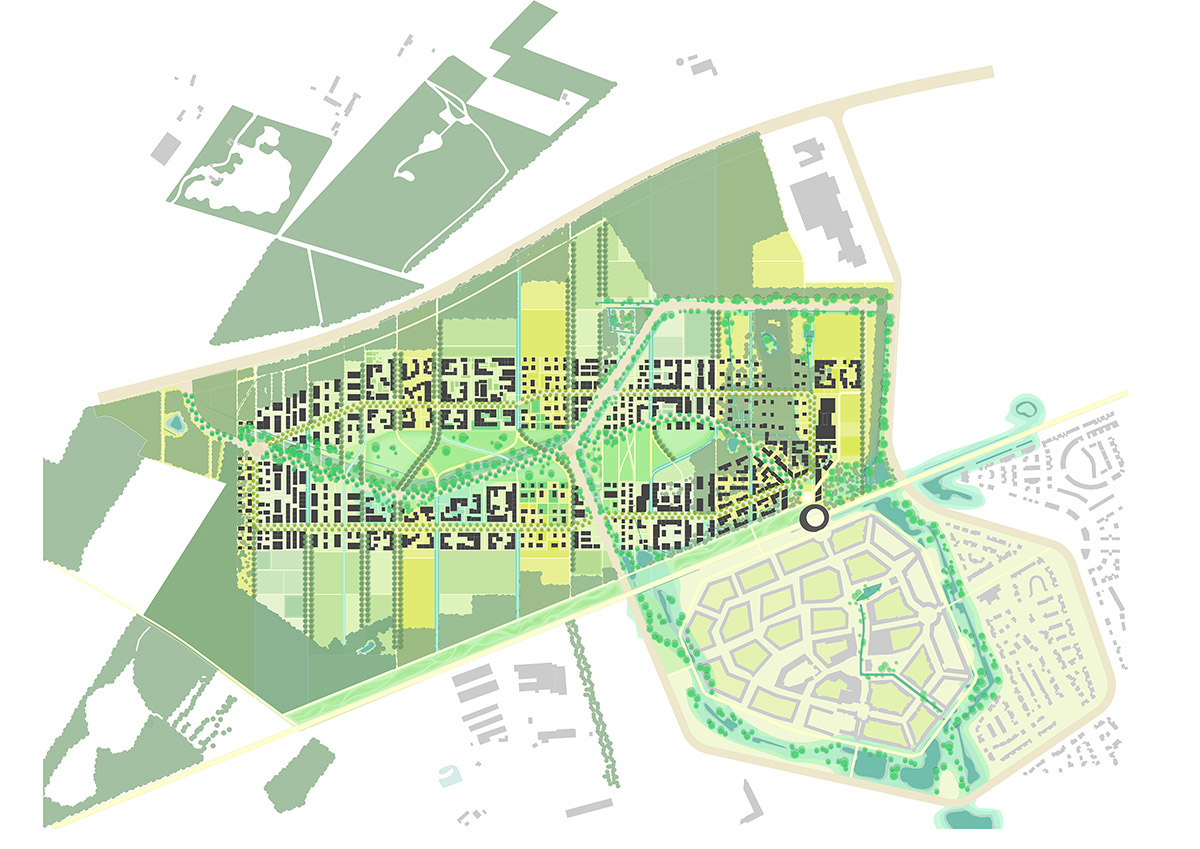 In addition to UNStudio’s urban vision for ‘The Smartest Neighbourhood in the World’, our sister company UNSense is currently in the process of forming a consortium to realise a residential area at BSD which will contain 100 houses and cater to a cross-section of society. In this living lab, UNSense will implement an urban data platform to investigate how data can be applied to improve people’s lives in cities. 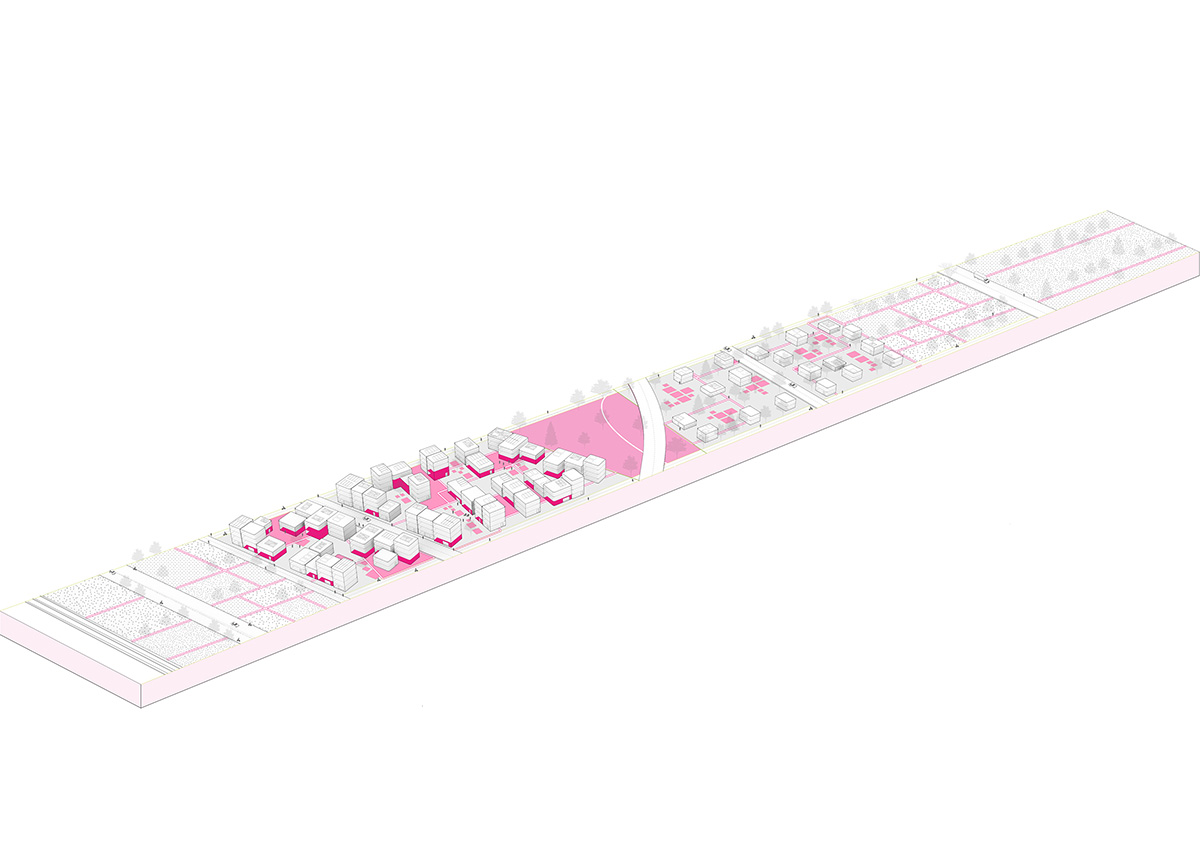 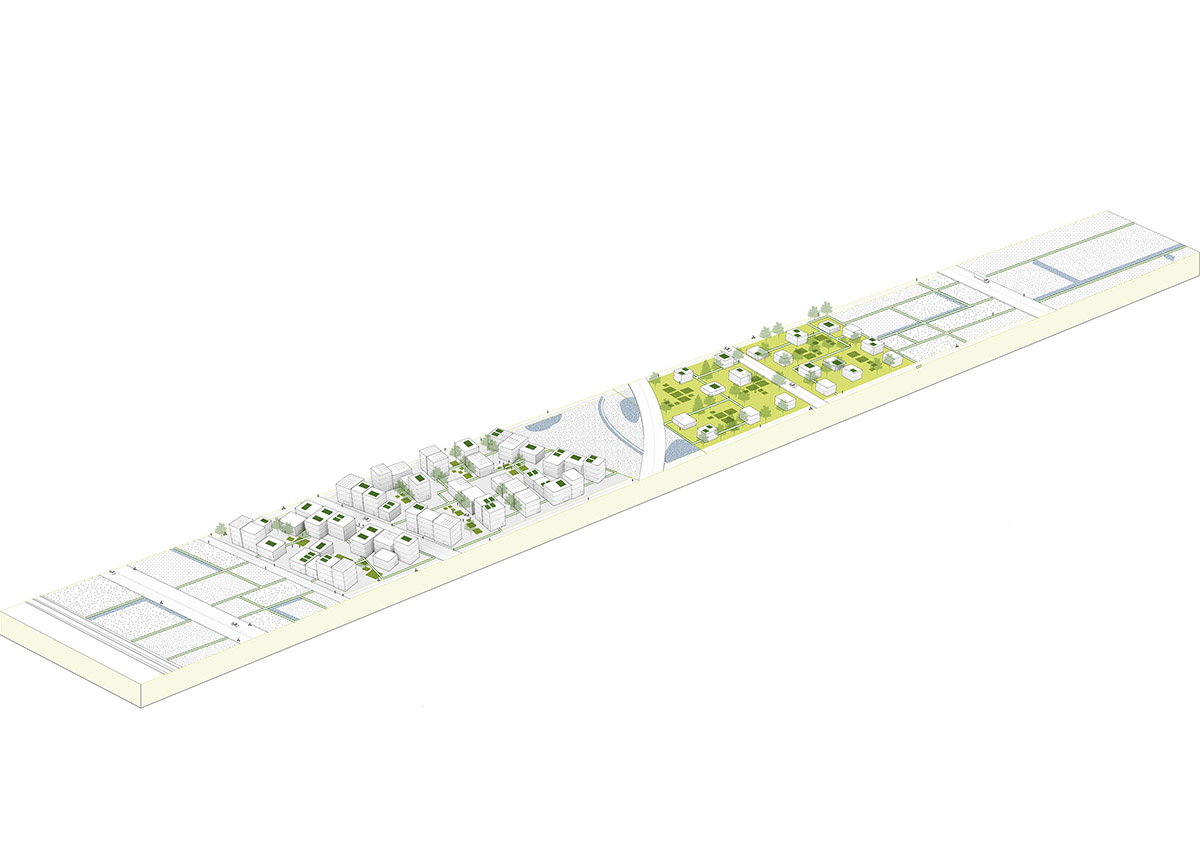 "There is a growing demand for people to have more control over their own data. By considering data as a currency and by placing ownership with the residents of the 100 Houses project, a controlled test environment will be created which explores how such an approach could lead to alternative economic models," said UNStudio.

"These include personal cost savings for digital amenities, such as mobility services, food and retail. A Board of Ethics will serve as an objective advisory body for issues pertaining to data ownership, privacy, regulation and commercial gain for the end user."

All images courtesy of UNStudio unless otherwise stated