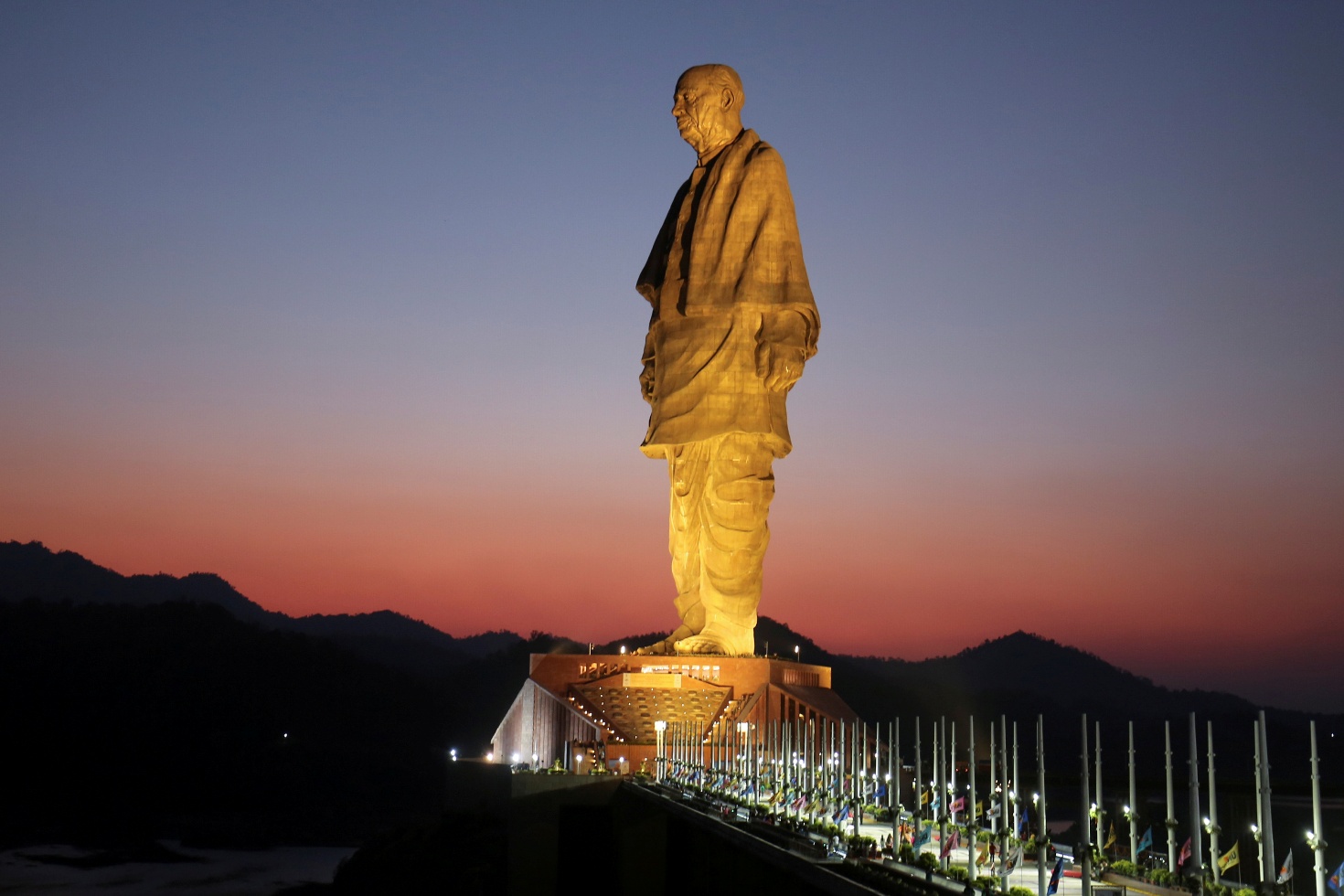 The Prime Minister of India, Narendra Modi dedicated to the nation world's tallest 'Statue of Unity' on October 31, 2018. The 182-metre high statue of Sardar Vallabhbhai Patel is situated 3.5 km downstream from the Sardar Sarovar Dam on Sadhu Hill on the bed of river Narmada in Gujarat. 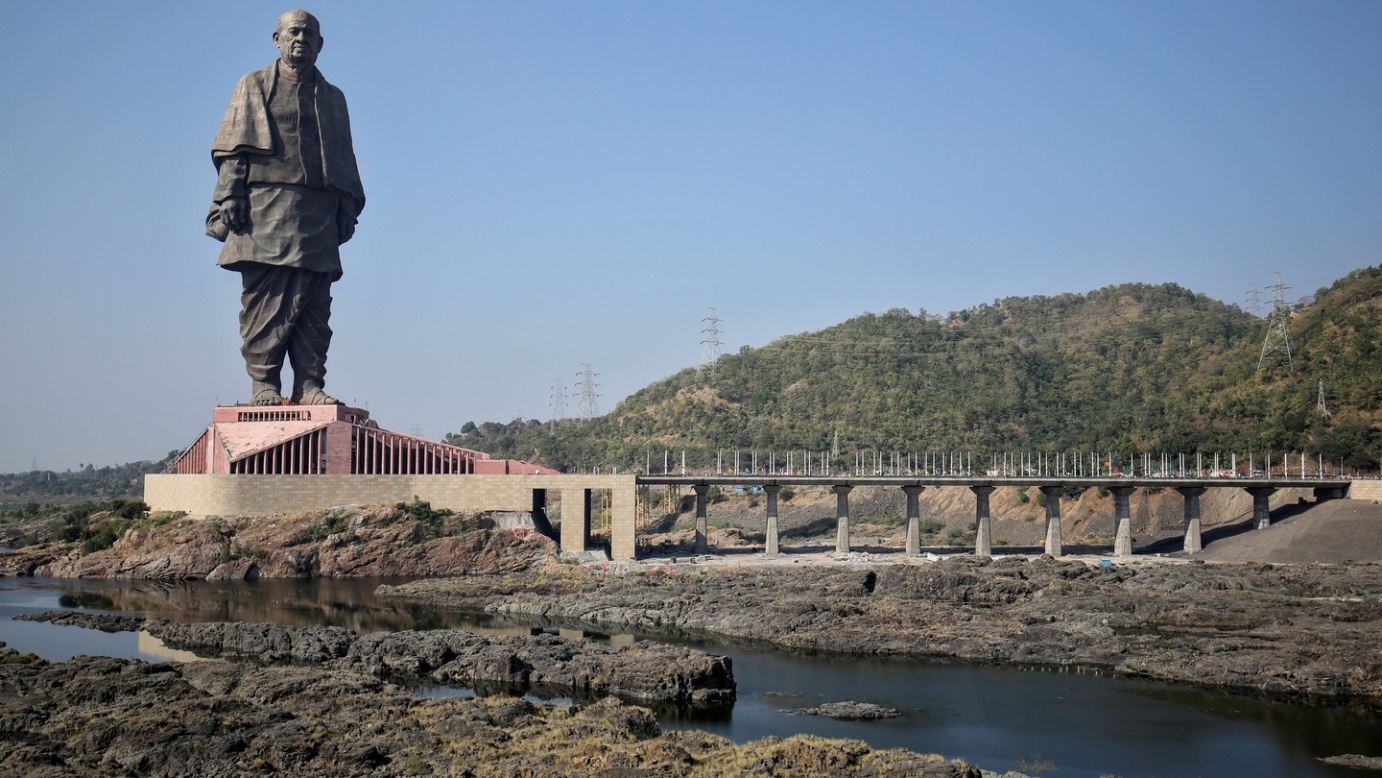 Sardar Patel (1875-1950) was a towering leader and founding father of Republic of India. After Independence in 1947 he was elected the first Deputy Prime Minister of India. Also known as the architect of Independent India, Sardar Patel integrated more than 562 princely states to build united India. Hence a statue as tall as the stature of Sardar Patel is a befitting tribute to the 'Iron Man of India' as he was popularly known. 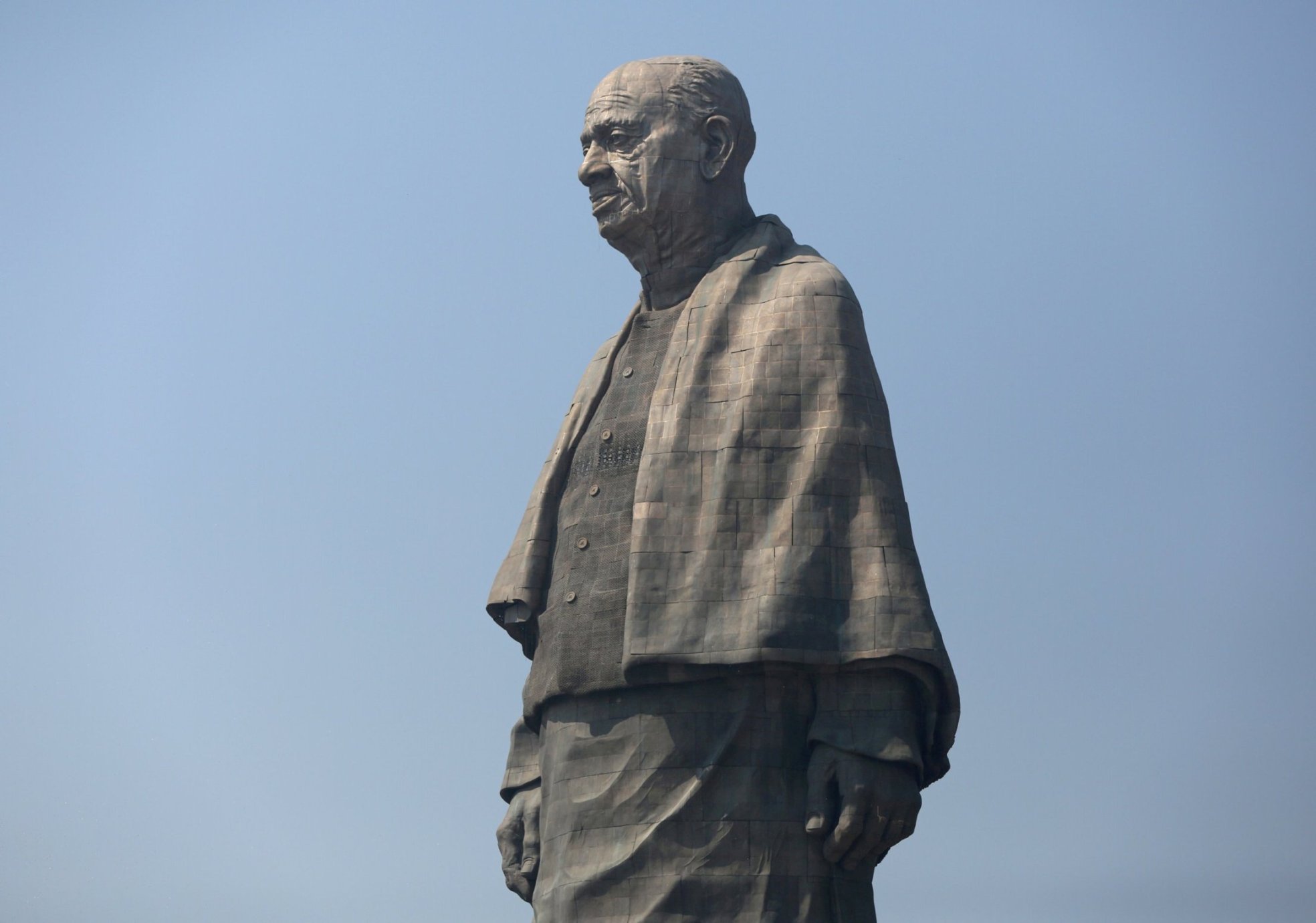 A comparison of the heights of other tall statues in the world shows how towering the 'Statue of Unity' is. For instance: Spring Temple Buddha in China is 128 m high; Guanyin of Nanshan in China is 108 m high; Statue of Liberty in America is 93 m high; The Great Buddha in Thailand is 91m high; The Motherland Calls in Russia is 91 m high; and, Christ The Redeemer in Brazil is 38 m high. 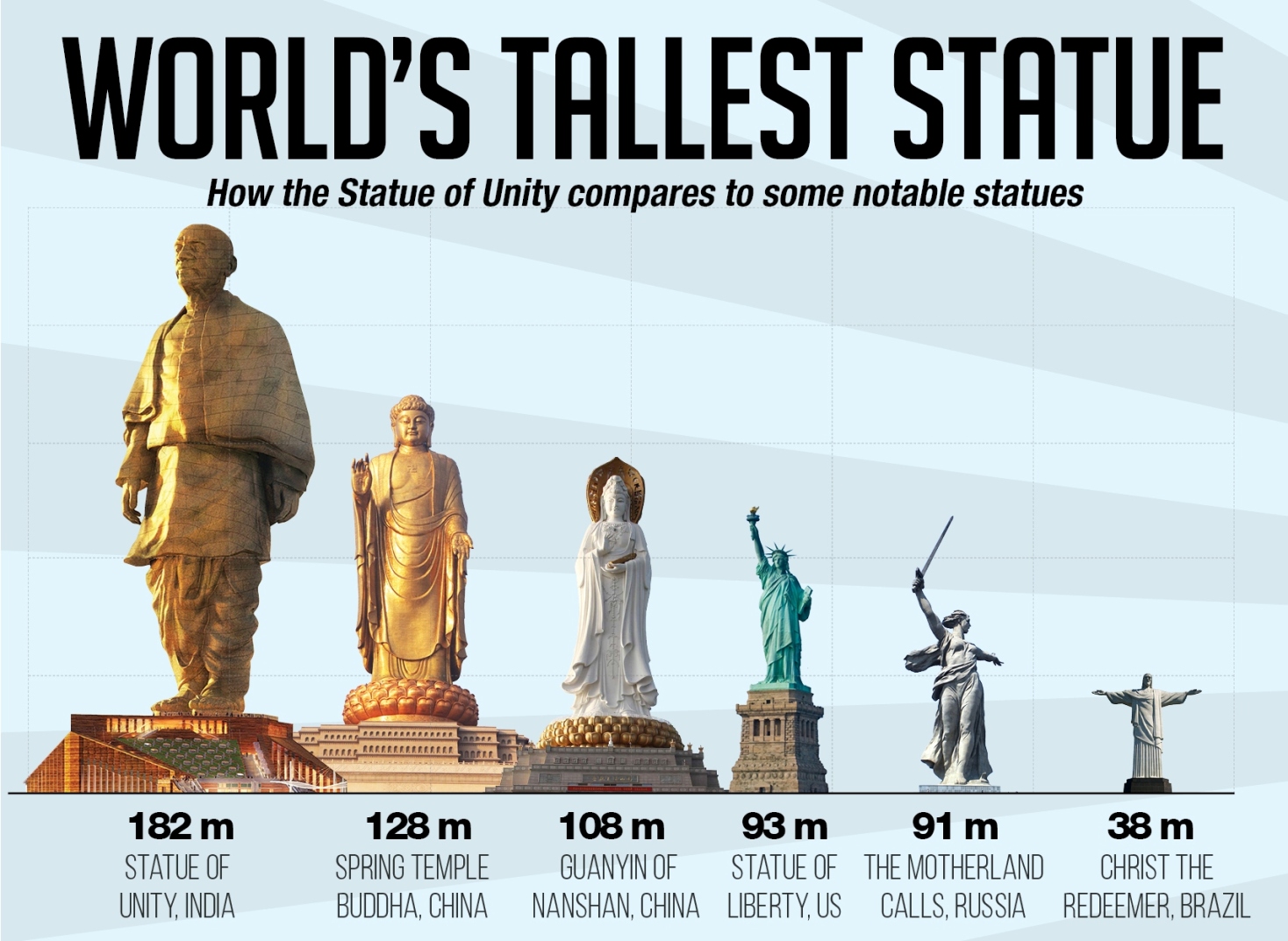 The 182 metre high 'Statue of Unity' has been sculpted by none other than Ram Sutar - a 93 years young and most celebrated sculptor of India. The gigantic civil construction of the statue and its surrounding areas has been done by the world famous construction company, Larsen and Toubro (L&T).

The L&T has the legitimate claim of constructing world's tallest (182 m) statue in a record time of 33 months. The statistics issued by the company reveals that in the construction of 'Statue of Unity', 212,000 cubic metre of concrete, 6000 tonnes of structural steel, 18000 tonnes of reinforced steel and 3550 tonnes of bronze including cladding have been used. 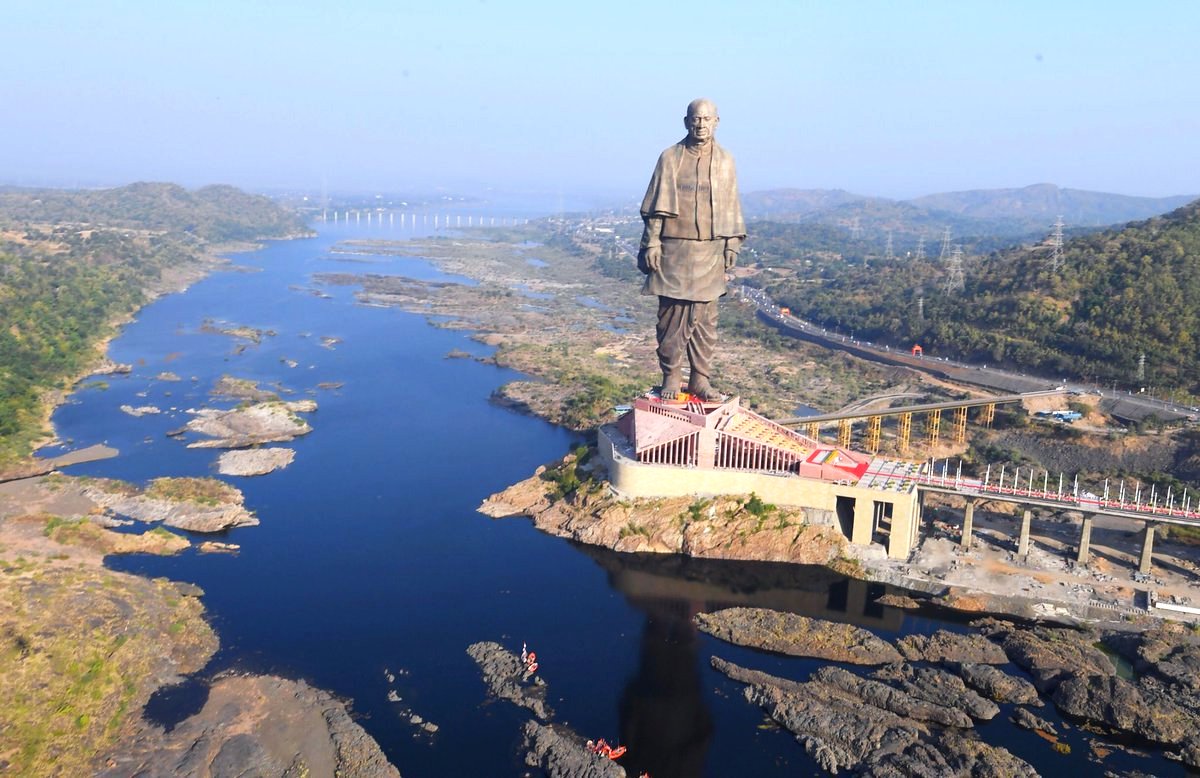 Built at a cost of Rupees 2979 Crores, the construction was carried out by 250 engineers and 3400 construction workers. The 'Statue of Unity' has been built to withstand strong winds at 180 kmph speed. It is also strong enough to withstand earthquakes measuring 6.5 on Richter scale at a depth of 10 km and within a radius of 12 km. Likewise to protect the statue from floods its base has been kept above the highest flood level recorded over a 100-year period in the area surrounding the Sardar Sarovar Dam.

Unlike most of the other tall statues in the world which have broad bases, 'Statue of Unity' is slender at the base. This is due to the walking pose of Sardar Patel. There is also a gap of 6.4 m between the two feet because of the pose. This posed a great challenge to the structural engineers who were competent enough to address this problem along with others. 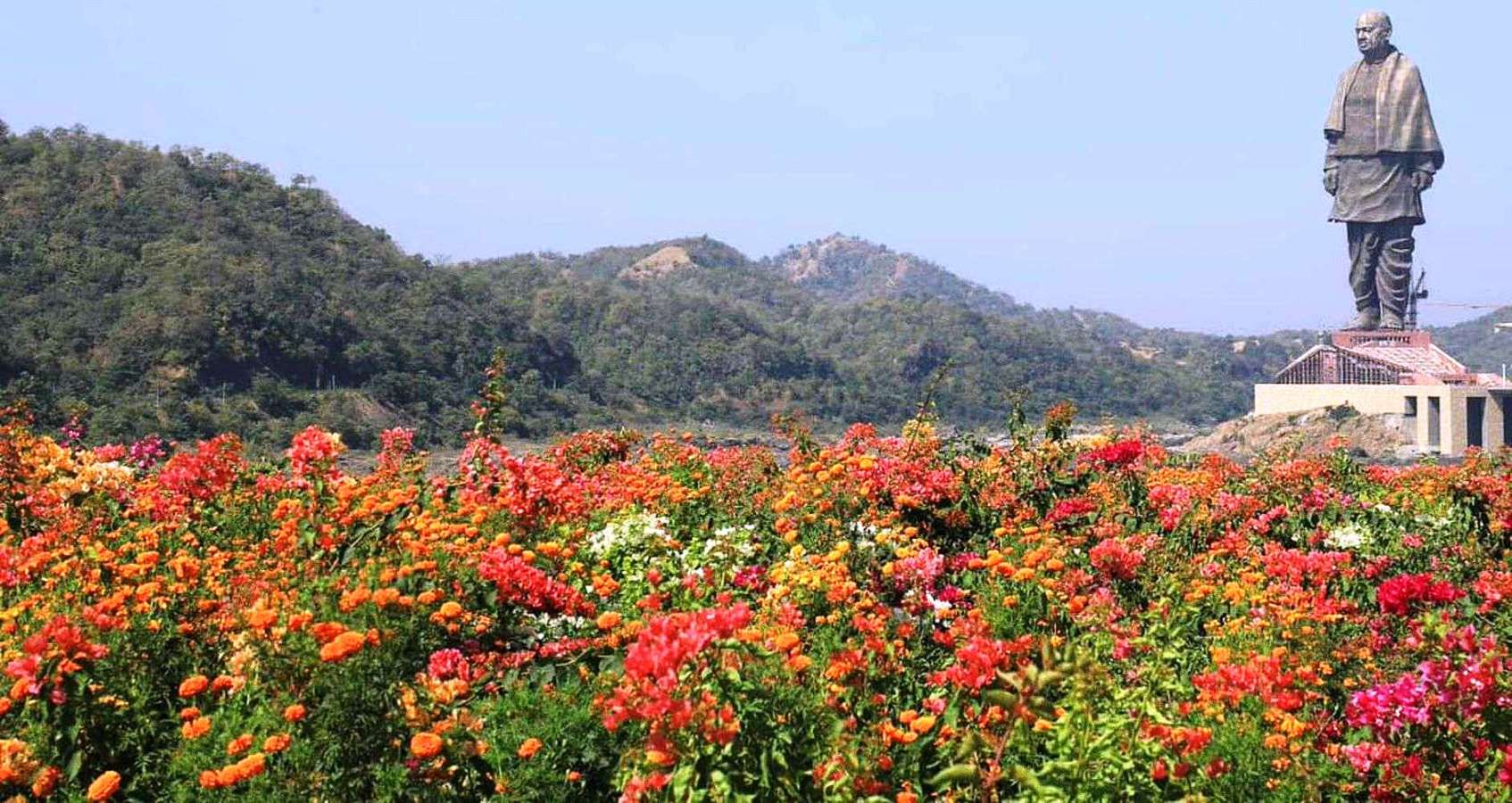 Apart from the 'Statue of Unity', the area around it have been developed as a major tourist hub. Among the main attractions are; a Museum on Sardar Patel's Life; Bharat Bhavan Exhibition Hall; Tribal Museum and Handicraft Market; Valley of Flowers; and, facility to appreciate the natural scenery from an altitude of 153 metres. 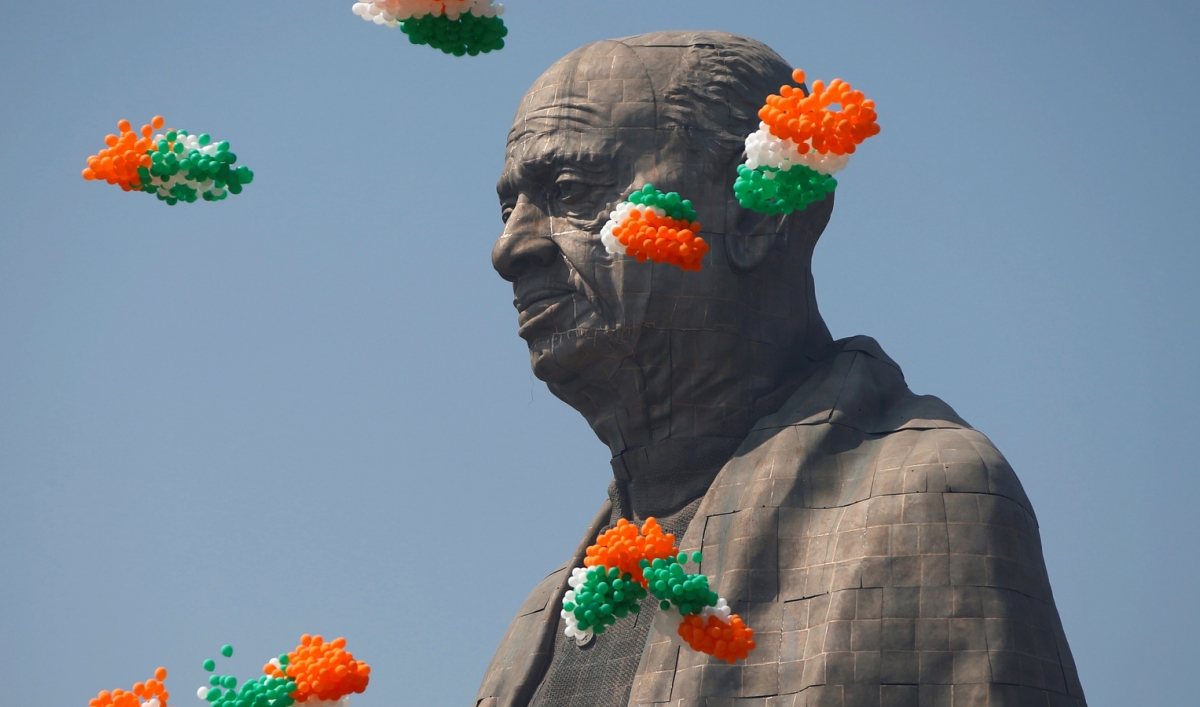 On the auspicious occasion of inauguration of the 'Statue of Unity' on 143th Birth Anniversary of Sardar Patel, Prime Minister Narendra Modi himself wrote a historical essay - published in the Tribune of 31 October 2018.

Narendra Modi states, "Statue of Unity is a symbol of both the unity of hearts and the geographical integrity of our motherland. It is a reminder that divided, we may not be even able to face ourselves. United, we can face the world and scale new heights of growth and glory." 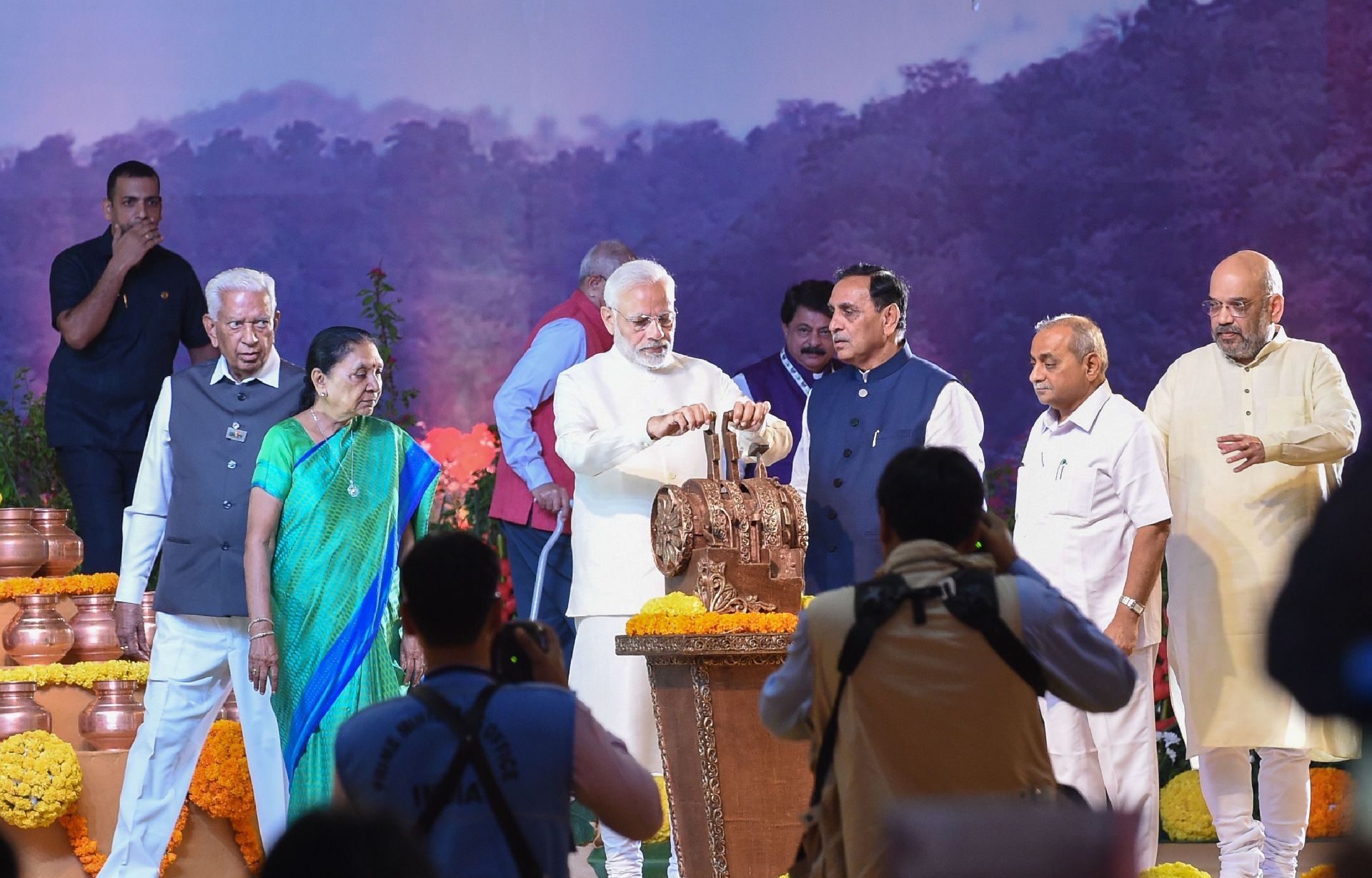 > via Statue of Unity