Grimshaw, HWKN, Farshid Moussavi and WHY to create culture and commerce hubs in metaverse 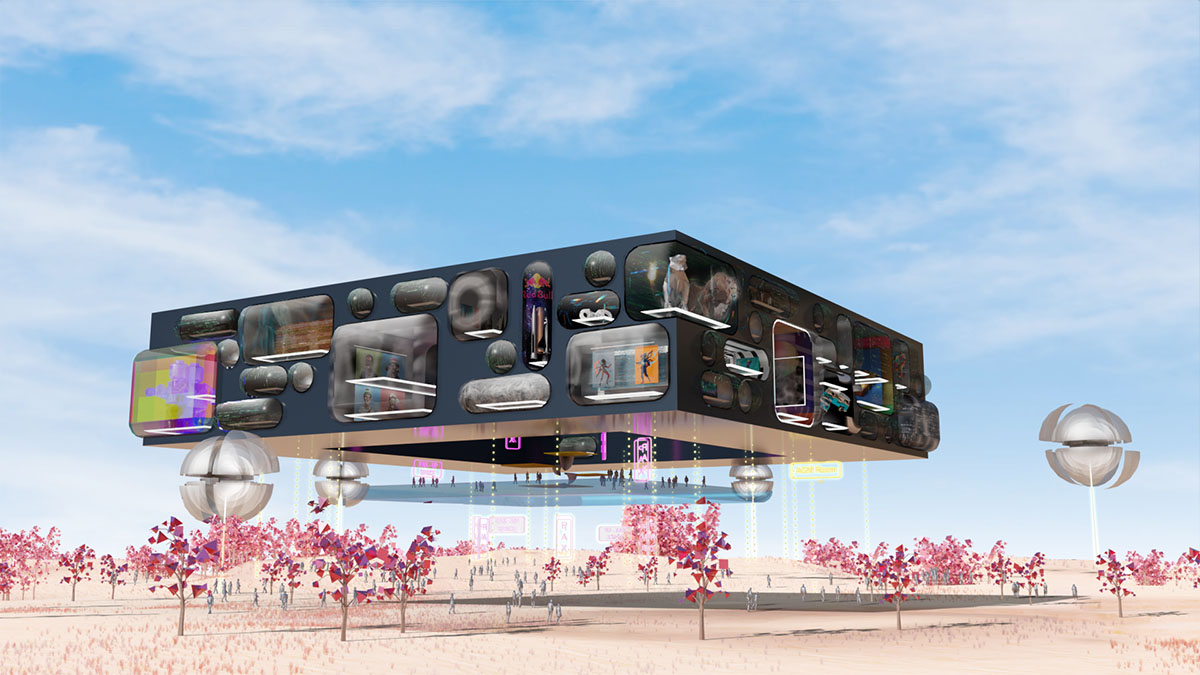 The four firms have created spaces for virtual culture and commerce hubs inspired by the caravanserai of the ancient Silk Road. Each studio has designed their own Metaserai - which will be immense trade, event and culture hubs and home to pax.world’s sociocultural building blocks.

pax.world is a land-based metaverse which will be launched in early 2023. pax.world founder Frank Fitzgerald started to build the metaverse during lockdown when he became frustrated with teleconferencing as a means of doing business, socialising and experiencing culture.

The platform was conceived as a virtual space in which people were inspired to do all of this and more, with the Island divided into thousands of plots of land, on which landowners can build, trade and host events.

The design of Metaserai will home to communal spaces through multiple building blocks. The blocks will be used to host virtual cultural events such as concerts and theatre and digital art galleries, trade shows and markets, conferences and hackathons, educational events such as lectures and panels, and social events such as parties and festivals. 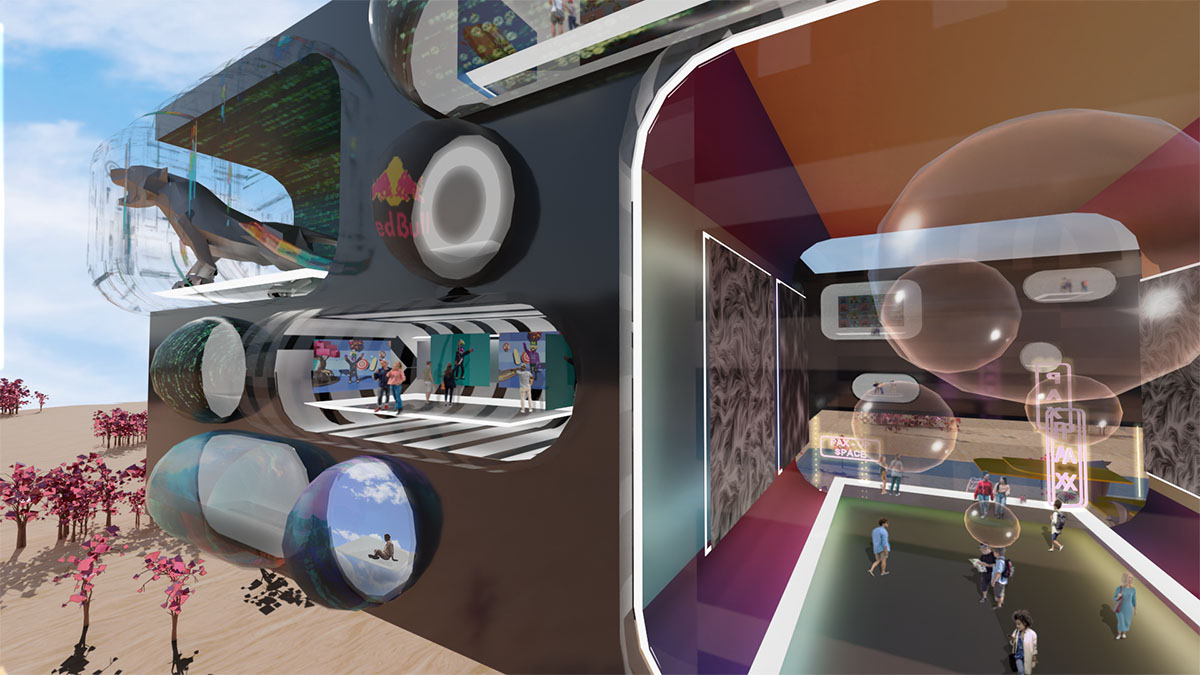 Grimshaw's Metaserai has a channeling form shaped by the interactions of human behaviour. Image courtesy of Grimshaw

The Metaserai by Grimshaw draws references from the predominant architectural features of the caravanserai. The team creates a simple structure building formed around a central courtyard and watering point. The building is shaped by the interactions of human behaviour.

Shaped in a cuboid form, the design appears to levitate in its location, not tied to any physical structures or gravitational forces. Thanks to its spherical "follies", visitors can enter the metaserai or use gates and engage with other users to trigger a flow of data up through the suspended cuboid.

This interaction seeds bespoke spaces within the Metaserai, all generated from a kit-of-parts. This fluid, constantly shape-shifting architecture, emerging from human interaction, is dynamic and has many iterations, at a speed, scale, and breadth otherwise not possible in a physical environment.

"Experimentation with design, technology and materials is an inherent part of Grimshaw’s history and legacy, enabling us to transform the experience and outcomes of our built environment," said Keith Brewis, Partner at Grimshaw.

"The metaverse is an enabler of this approach and an evolution of our current processes of design communication in the virtual world, where we take concepts from the physical to the digital and challenge ourselves, in real time, to further understand the human perception of space in architecture."

"Engaging with the metaverse as it matures, and working with pax.world, we are also experiencing the empowering nature of the digital world: Grimshaw’s Metaserai acting as a place where users can create rather than consent to their own environments," Brewis added. 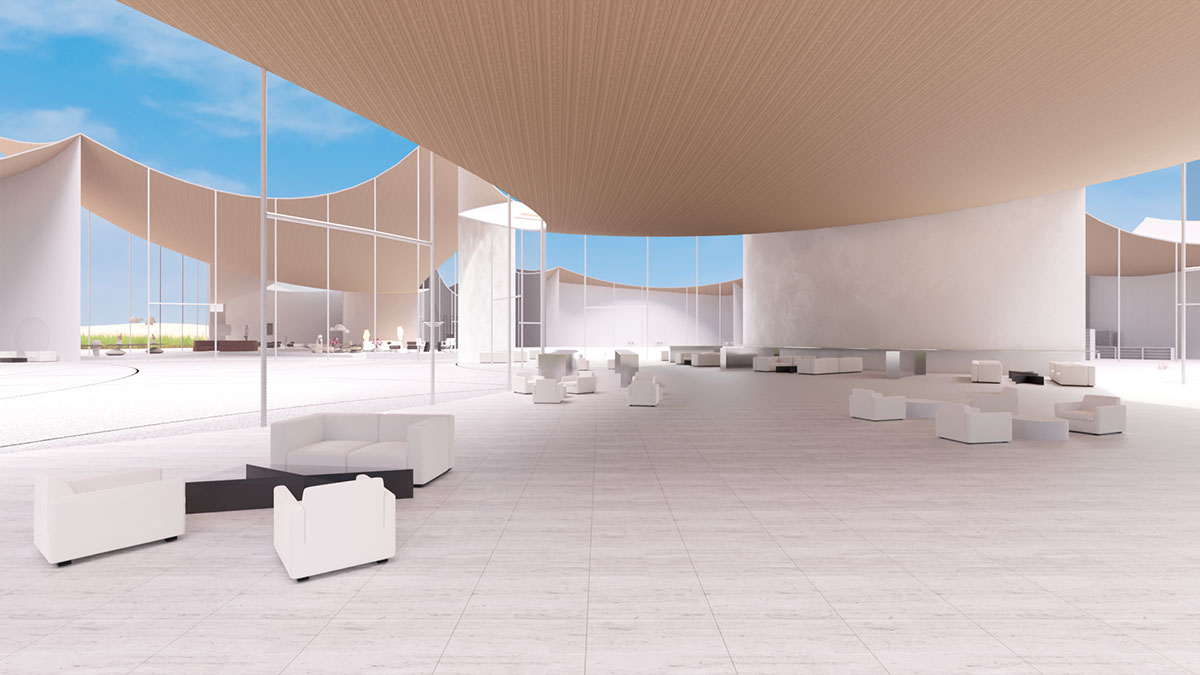 Farshid Moussavi Architecture's metaserai is designed for event spaces which are organized in a circular form. Event spaces are arranged around three large circular courtyards with open views to the communal great halls. The design fosters inclusivity, multiplicity, and diversity.

FMA's design is conceived to be at once an enclosure and focal point for gathering, but without interiority.

The event spaces are connected directly with one another through the courtyards, obviating any internal circulation, and activating the courtyards as spaces of serendipity between visitors of all ages and interests. 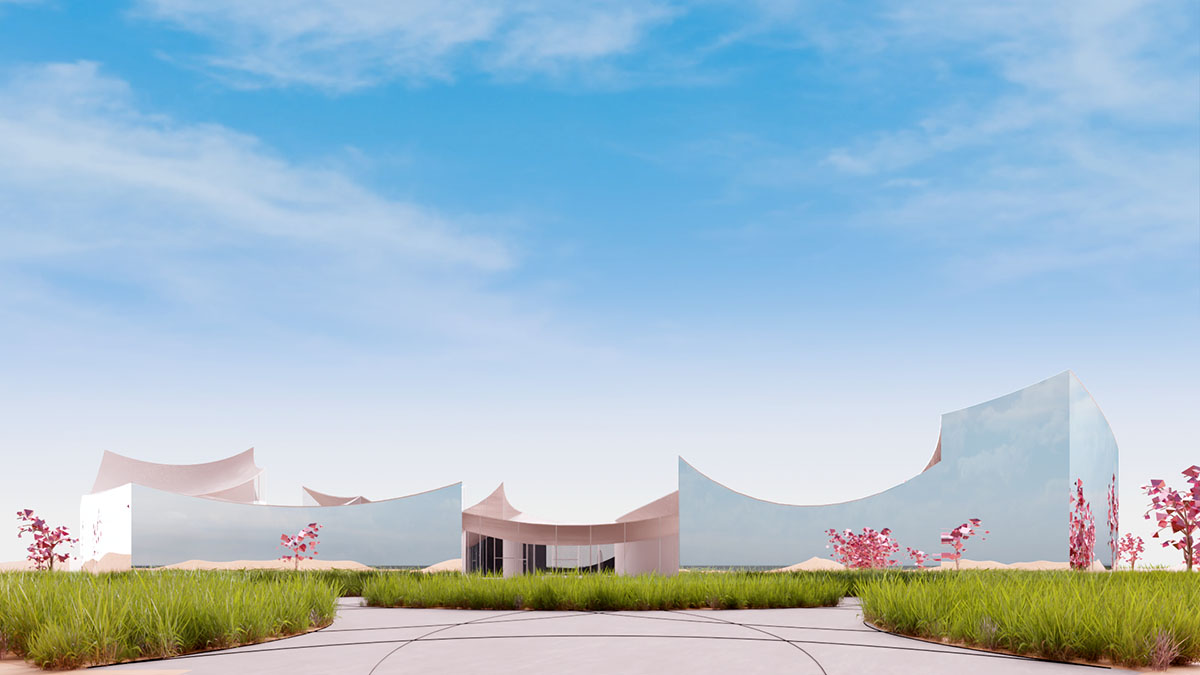 While courtyard views are felt throughout the Metaserai, visitors feel themselves in a sensation of openness wherever they are. Moussavi clads the façade of the Metaserai in mirror.

According to the architect, the mirror material "defies any notion of exclusivity, perpetually reflecting the exterior context and visitors approaching the building, changing the way the Metaserai is perceived throughout the day." 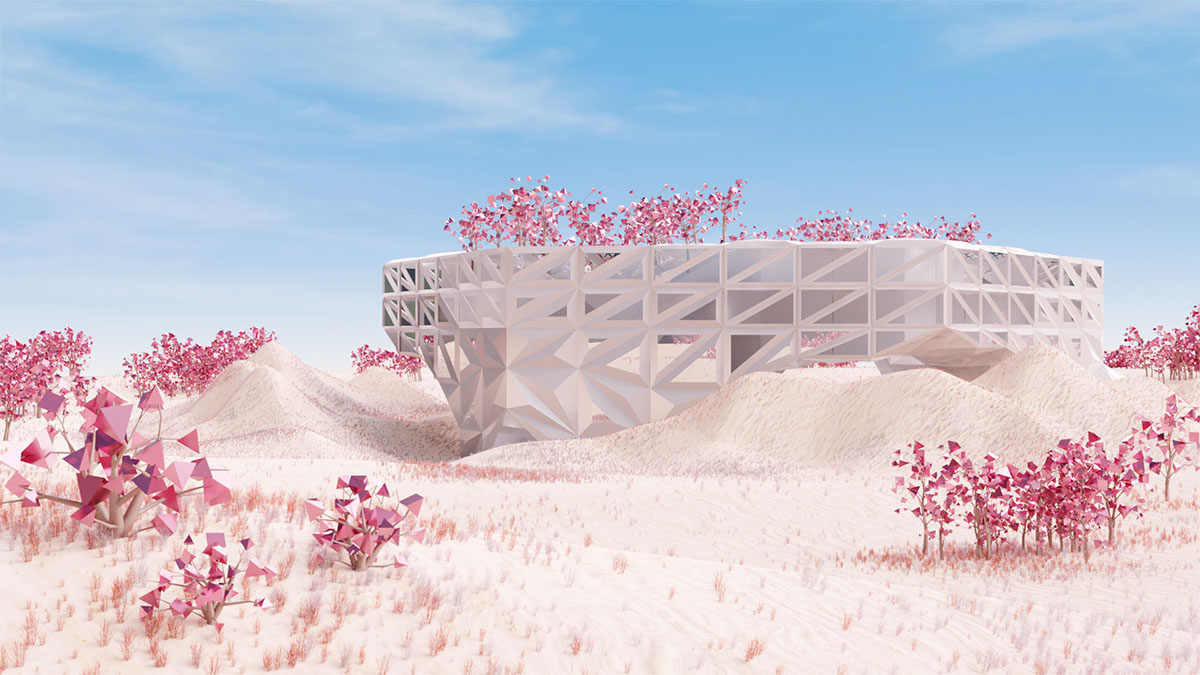 New York-based firm HWKN designed a metaserai, named Paxton, as "a wildly beautiful, multi-level, and open hexagonal form". The studio wanted to create a building that can be "unforgettable" by visitors.

The language of the pink-colored building block is derived from the real world yet transformed by the potential of the digital freedom of the Metaverse.

Nestled in the rolling desert, Paxton has much to offer, according to the studio. The building block includes concerts in a giant amphitheatre, art in its wall-less galleries, meetings in rooms open to the sky, and exercise facilities in its sculptured rooftop garden. "HWKN has not designed Paxton as a simple resting point," said Matthias Hollwich, principal and founder of HWKN.

"Rather what HWKN’s Metaserai offers is the opportunity to see this novel world with fresh eyes and to garner new experiences. Paxton is a world you choose to enter in order to explore, change, and grow," Hollwich added. 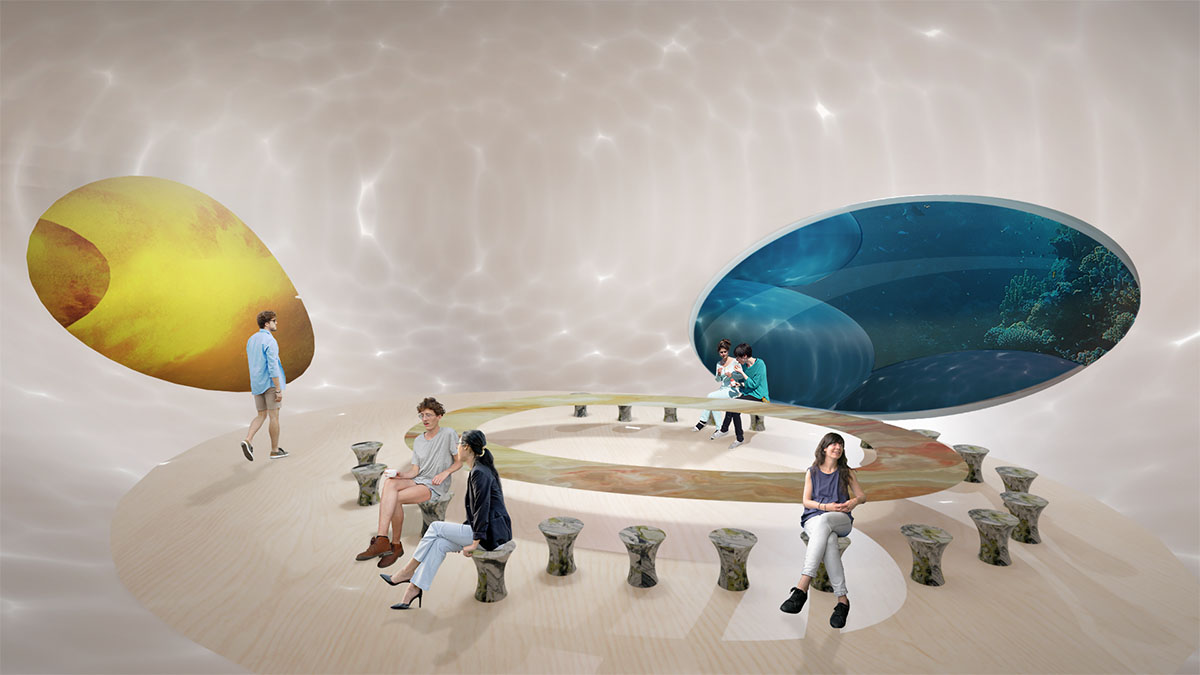 WHY designed a metaserai as a garden that can be "a symphony of spirited touchpoints". Image courtesy of WHY

US firm WHY designed a metaserai as a garden that can be "a symphony of spirited touchpoints". The design evokes a chorus of commerce and conversation reminiscent of the caravanserai.

WHY stated that "the design fuses a grounding and thereby stimulating connection from the vibrant virtual experience of this "built" world to the positive emotional and even physiological responses of the visitors." 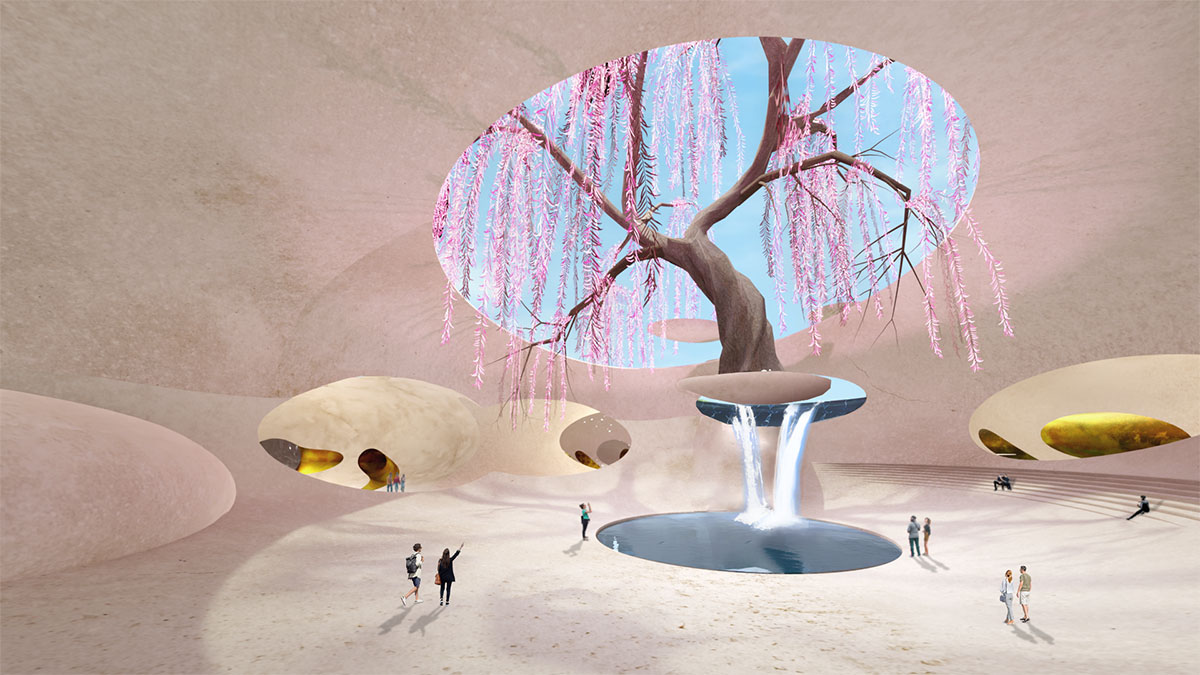 WHY places its metaserai into the land and designs a life-giving tree in the center of an open, public plaza.

The space is conceived as a harmonious celebration of natural materiality with a healthy ecosystem of grass and plants reaching across the landscape.

The space consists of serene water featuring in pools, waterfalls, and skylights; and "painted" timber and stone running the corridors.

"Non-visible elements, such as those that influence auditory processing and illicit a perhaps unanticipated appreciation for depth of space, permeate throughout," said WHY in a project description. 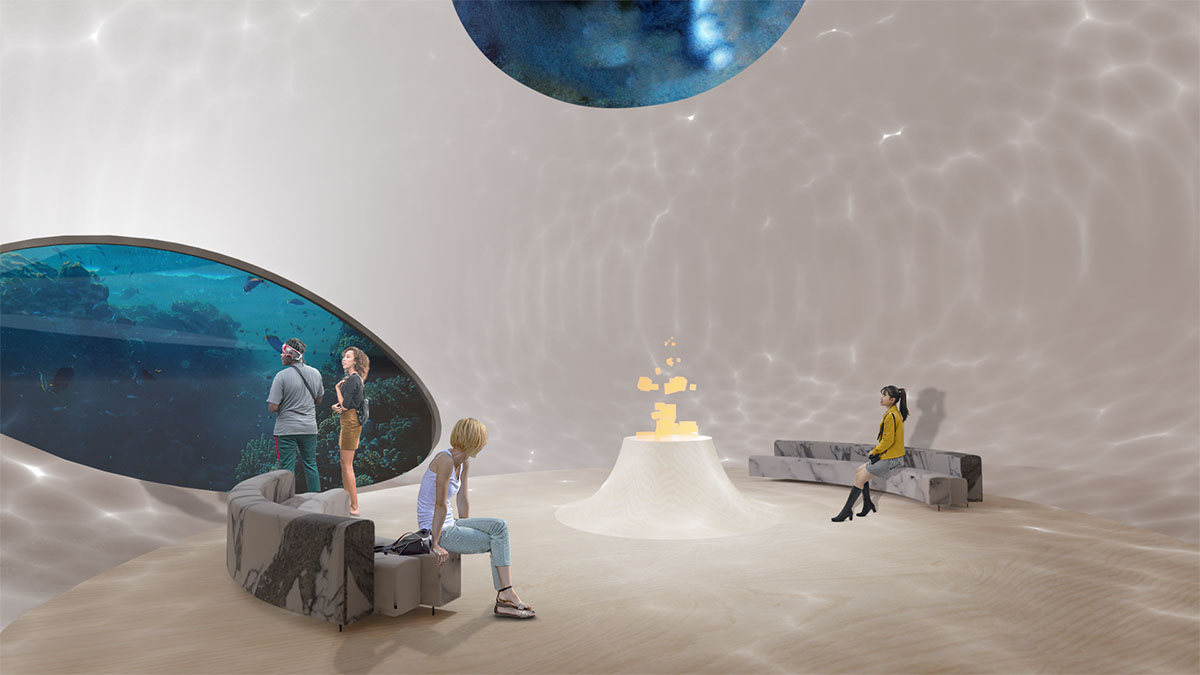 The highly modular spatial configurations from the bustling central courtyard to private chambers; the subterranean rooms to the levitating islands; the welcoming grand halls to meditative relaxation rooms; and the curated art galleries to the enterprising pop-up spaces allow for expansive programming—convenings and retreats, launches and openings—and everchanging experiences that are both tailored as well as customizable and bespoke. 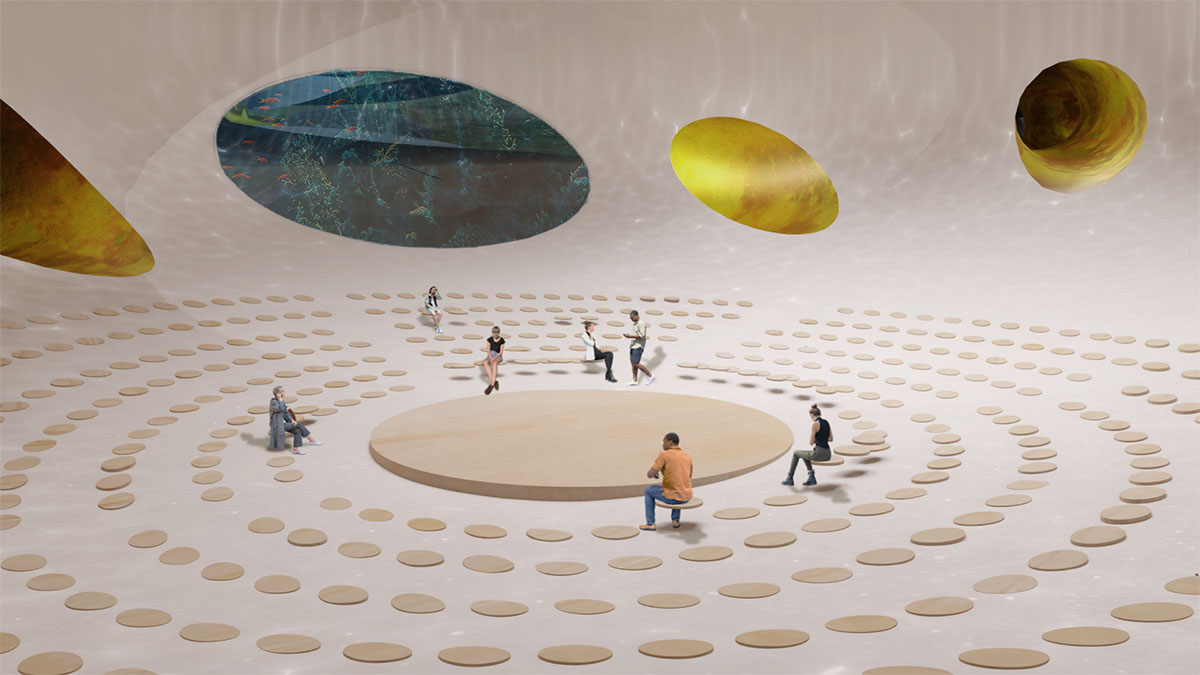 WHY's metaserai will maintain this everchanging experience through regular dance parties and listening sessions generated by DJ set and radio stations; townhalls and forums led by a panels and podcasts; a calendar of art shows and cultural performances; and eventually a living, interactive blooming garden with exotic, carnivorous, bio-luminescent, surreal, and extinct plants.

"Our spaces are intended to be a place where people can be and become the most illuminating and imaginative version of themselves," said WHY Buildings Director Andrija Stojic.

"They visit not only to encounter new worlds, but to immerse themselves in community and collaborate with like-inspired peers. Therefore, our content and product are layered in such a way that facilitates seamless onboarding and interaction—with tiered and iterative education—to ensure an increasingly robust experience," Stojic added.

"pax.world is the metaverse for grown-ups and- as well as creating functionality and governance that will allow people to trade, network and experience culture as never before on a virtual platform- we want this ethos to live and breathe through the beautiful, sophisticated aesthetic created for us by some of the best architects in the world," said pax.world founder and CEO Frank Fitzgerald.

"Architecture has extraordinary power to inspire human progress and I am confident that the masterpieces designed by our four partners will drive the formation of real communities in pax.world and be the building blocks of the world’s first true virtual society," Fitzgerald added.

Fitzgerald emphasized that "whereas other iterations of the Metaverse have taken the form of expanded video games or 3-D social networks with primitive visuals and limited functions, pax.world is being developed into a fully functioning virtual society governed by DAO (Decentralised Autonomous Organisation) and with an economy built on its $PAXW token."

Fitzgerald also added that pax.world is also partnering with a series of non-profit organisations and NGOs to pioneer solutions to such issues as sustainability, democracy, diversity and privacy in the Metaverse.

Top image in the article courtesy of Grimshaw.