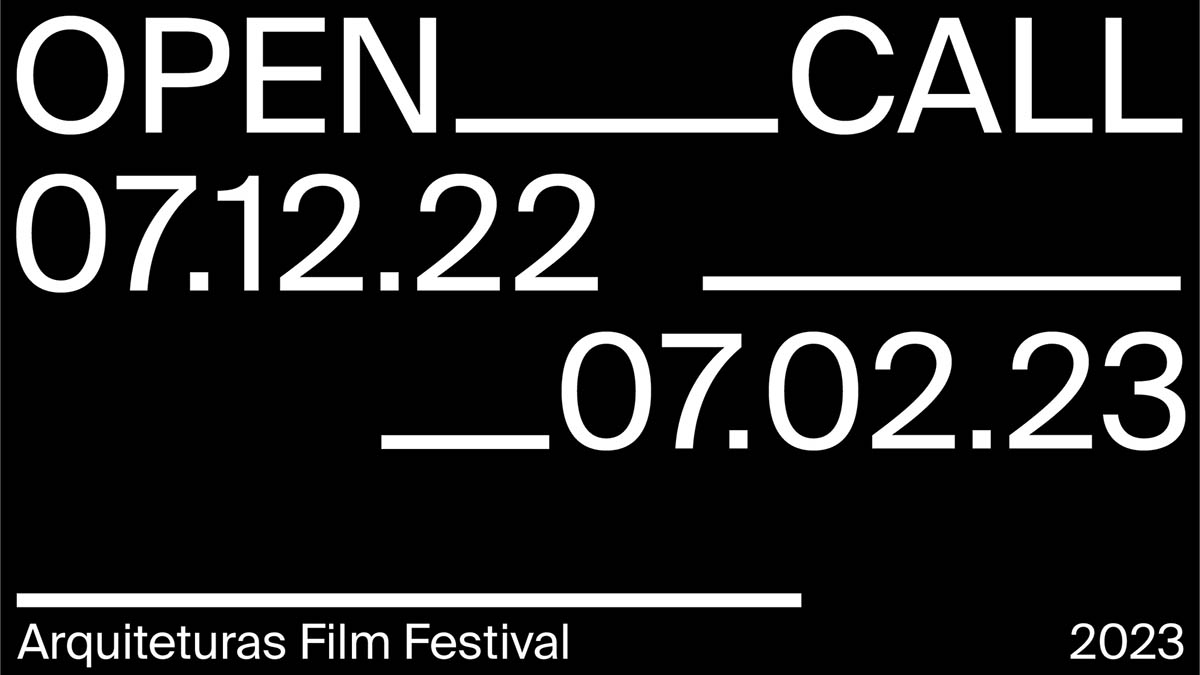 In its 10th edition, Arquiteturas Film Festival harnesses the power of moving images as a tool for promoting architecture. Now in Porto, the festival is cementing its reputation as an international platform for discussing and disseminating architectural production through films, exhibitions, and debates.

The festival will take place over five days, from 27 June to 1 July 2023, and will be divided into three main sections: Official Programme, Guest Institution Programme, and Competition Programme. Each section is associated with one or two venues, creating a network between different spaces in the city: Batalha Centro de Cinema, Casa Comum, and INSTITUTO.

This year's edition ‘Where Life Happens’, explores the way in which social structures are absorbed by the built environment and reflected in architectural practice. The built form embodies architects’ efforts and ideals. It is capable of changing the course of history for a family, a neighborhood, or an entire city. Among the different influences weighing on us, architecture and spatial practices show that we are also made of the spaces we occupy.

We would like to invite architects, filmmakers, and distributors to submit their film projects which are related to the festival’s theme – “Where Life Happens”. It can be a short or long film, fiction or a documentary as well as an animated film - all formats are welcome.

The Call for Entries is open until 7th February 2023.

Arquiteturas Film Festival awards are attributed to films in the following categories and separated into two stages - open call and festival-selected films:

Audience Award
• Award for the best film according to the audience vote.

Architecture is where life happens. The spaces we occupy materialise and manifest our experiences. Buildings and landscapes are transformed as we build our communities. In modern society, our pace of life, rituals, forms of governance, and ways of interacting with one another in friendships, at work, in educational and healthcare settings, and in love are becoming more diverse. How does architecture adapt to suit our day-to-day lives?

The Call for Entries is open until 7 February 2023. The submissions should include a secure online screener, a synopsis, high-resolution stills, and short information on the production and team.

Selected films will be contacted by 1March 2023. The programme and the jury will be announced in early June 2023.

2. Arquiteturas is the only international film festival in Portugal to screen documentary, experimental, animation, and fiction films where architecture plays the main role. We are particularly interested in the growing global interest in interdisciplinary approaches to contemporary architecture. We are looking for proposals that use the power of moving images as a tool for broadening public understanding and appreciation of architecture, as well as the permanent dialogue between city, space, and narrative.

3. The Selection Committee is looking for films with cinematographic qualities bringing forth, as a whole, the point of view of their authors.

5. Only entries that include the sending of the film and a duly filled application form will be accepted.

Arquiteturas shall receive up to the 7th of February 2023:
• A version of the film with English subtitles, exception to be made to English-spoken films.
• Films shall be sent through FilmFreeway and the download permission must be activated.
As an alternative, after submitting the film at FilmFreeway a Vimeo link can be sent to:
[email protected]
• There is a 4€ submission fee

7. The version of the films to be used for the selection process will not be deleted. They will become part of the archive of Arquiteturas Film Festival, where the associates may consult them. For any kind of public projection, permission from the rights owners will be required.

8. The selection committee will decide the category in which the film will be programmed. The festival is responsible for the selection of the films that compose the entire programme.

d) Social Awareness Award - the jury will choose from all submissions, the film that best engages with architectural, urban, and social causes.

e) Audience award - to be voted by the public, during the festival

12. Only films concluded after the 1st of January 2022 are eligible for the competitive categories.

13. If the film is selected, Arquiteturas Film Festival will inform the participant: up to one month after the open call has ended. After the participant has been informed about the selection of the film, it must not be shown in Portugal until it is screened at Arquiteturas. The festival will also inform the entries that were not selected up to one month prior to the initial date of the festival.

14. Participants declare that the film submitted is their own and that its public screening rights have not been transferred to third parties.

15. Immediately after being confirmed the selection, you should send by email (only if the following wasn’t yet uploaded on FFW):

• Two photo stills from the film (minimum resolution: 300 dpi – 10x10cm) in a digital format
• Link to the film trailer (Vimeo or Youtube is preferred)
• Bio filmography of the director
• Final Synopsis for the online program and catalog (max.450 characters) in English. For Portuguese-submitted films the synopsis must be sent in English and Portuguese.
• Previous Festivals and Awards.

16. Until 30th April 2023, a copy of the selected film (in the right screening format), as well as posters, postcards, and promotional materials, should be sent to INSTITUTO headquarters, in Porto (organizer of Arquiteturas Film Festival)

17. In the case of films from non-EU countries sent by a courier (FedEx, DHL, UPS) the film must be accompanied by a Pro-forma invoice with the sender’s name, the film title, weight, measurements, and/or a number of reels. If sent by normal postal service the envelope or box must state – Produto cultural. Sem valor commercial. (Cultural Product. Without Commercial Value).

18. All the texts, data, and photos sent by participants to Arquiteturas Film Festival will be used for reference in various online and offline bilingual publications (including the Festival catalog, Website, and video library screens). This material may be translated, corrected or edited prior to publication. By submitting a film, all participants give Arquiteturas Film Festival free permission to publish this material for the above purposes.

20. After receiving the copies of the films, the festival is responsible for them until they are sent back.

21. All films screened during the festival must remain there until its ending and will be returned only after the closing ceremony of the festival.

22. The competition juries will comprise nationally and internationally renowned Portuguese and foreign personalities from the architectural and cultural world.

23. Arquiteturas Film Festival awards are attributed to the directors.

Social Awareness
• Award to the films engaged with architectural, urban, and social causes.

Audience Award
• Award to the best film according to the audience.

25. The decisions of the jury are final.

26. After the film has been selected, the festival may use a fragment of three minutes length of the film for the promotion of the festival on TV, radio, internet, as well as the publicity material of the film (press kit, posters, postcards, etc.) for promotion purposes also.

27. Arquiteturas Film Festival guests are not covered by the insurance of the festival.

28. The producer of a film that is awarded a prize at Arquiteturas Film Festival will undertake to mention the AFF prize in all promotional materials for the film and in the film credits of all copies that are produced after the festival dates.

29. All films' entries to Arquiteturas Film Festival presuppose knowledge of and acceptance of these regulations. Participation in the Festival implies acceptance without reservation of all the terms outlined in the present regulations and the reception of a filled and signed submission form. AFF reserves the right to cancel any submission or take any suitable measure in the event of a breach of regulations.

30. The festival board will decide upon all matters that are not covered by these regulations in accordance with the international rules of film festivals.