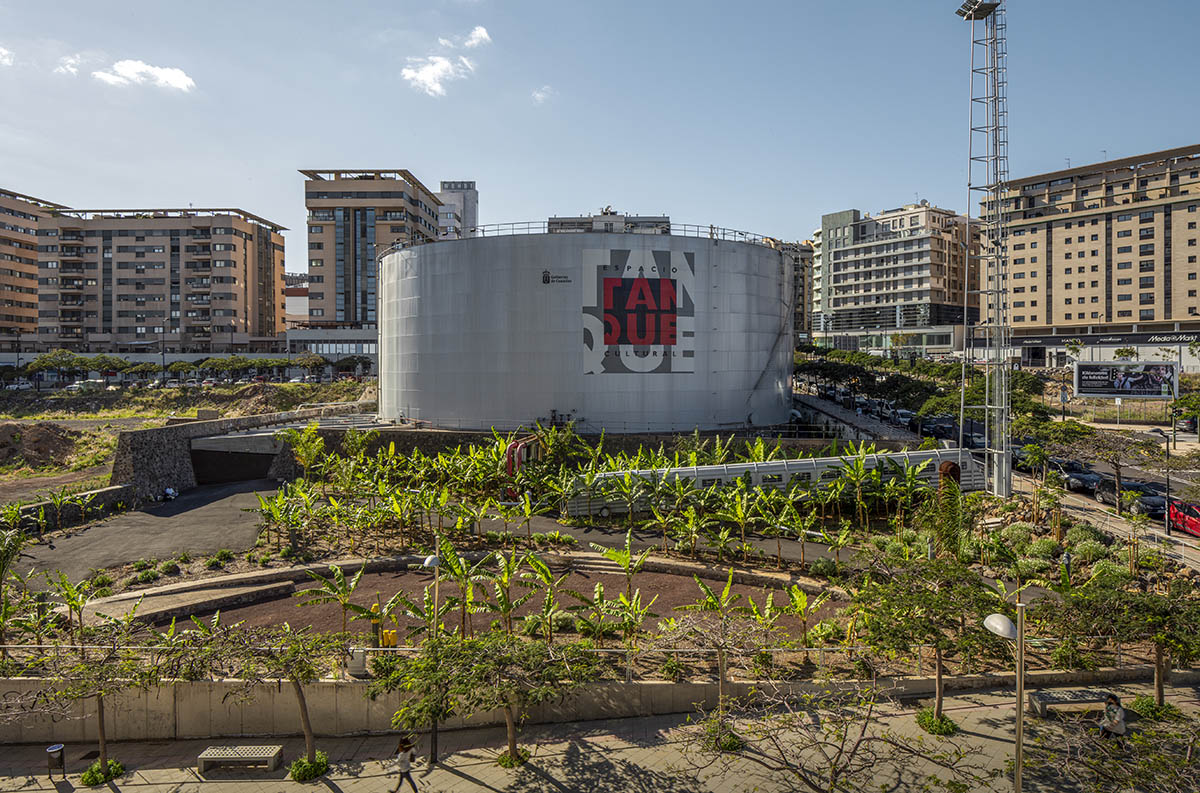 Named El Tanque Cultural Space, the 2,564-square-metre project, led by Menis Arquitectos founder Fernando Menis, includes the transformation of a former oil tank into a cultural space, which celebrates its 25 years of existence by opening the first green public space in the neighborhood where it is located.

Emerging as an adaptive reuse of the 1990s former oil deposit, the space was entriley conceived as a cultural space.

The new project is now culminating in an ecological restoration project featuring banana trees and other Canary species. 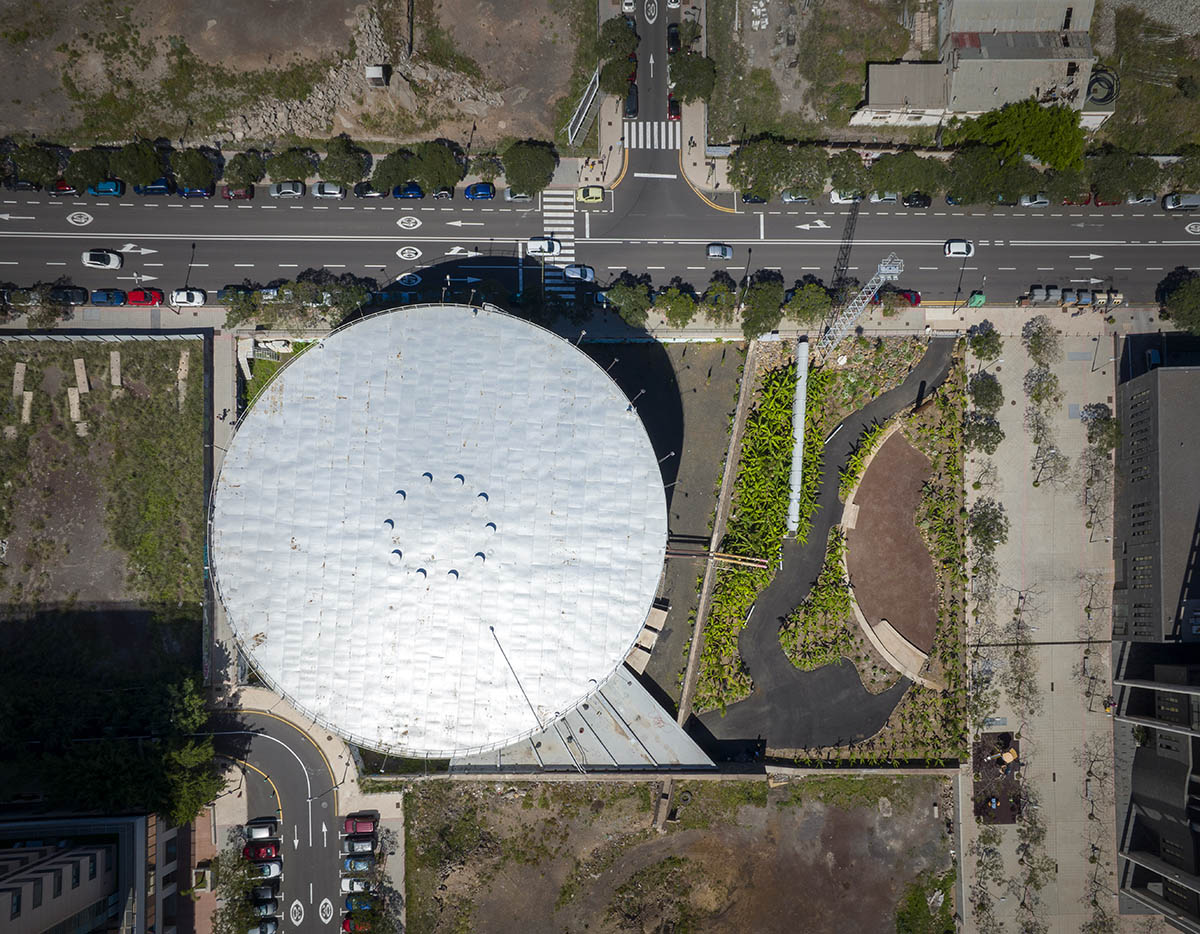 The studio has created all lighting and furniture pieces from waste elements, such as recycled-old diving bottles were adapted to their new use.

The El Tanque Cultural Space is a former oil tank, representative for the industrial history of the Canary Islands, which has been a part of the urban geography of Santa Cruz de Tenerife since 1929 when the first Spain's refinery was built here.

Faced with its imminent dismantling, in 1995, the then Councillor for Culture and Historical Heritage of Tenerife island's government, Mrs. Dulce Xerach Pérez, promoted the idea of keeping one of its large containers and gathered support around this non-profit initiative, which ended up being the current Association Amigos del Tanque. 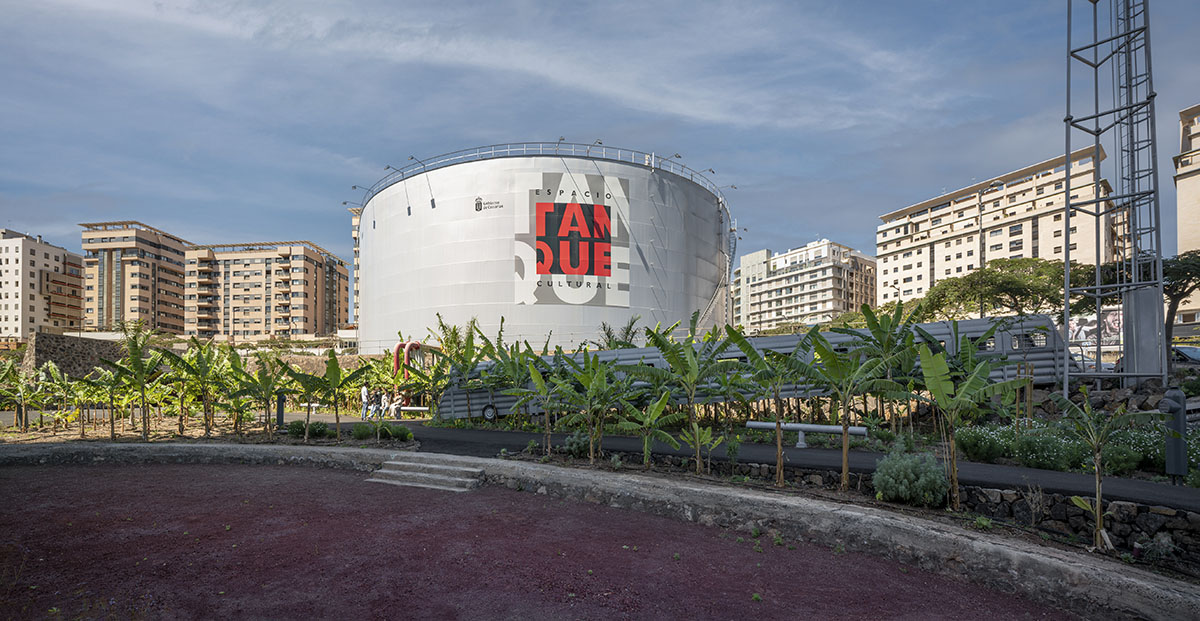 As a member of this activists group, the architect Fernando Menis carried out the rehabilitation and adaptation of El Tanque to cultural uses and gave support to the Association until it was listed as protected cultural heritage in 2014.

In 2022, the Association celebrates the 25 years of existence of El Tanque with an ecological restoration project of its surroundings, designed by the same architect, and which provides the Cabo Llanos neighborhood with its first green public space. 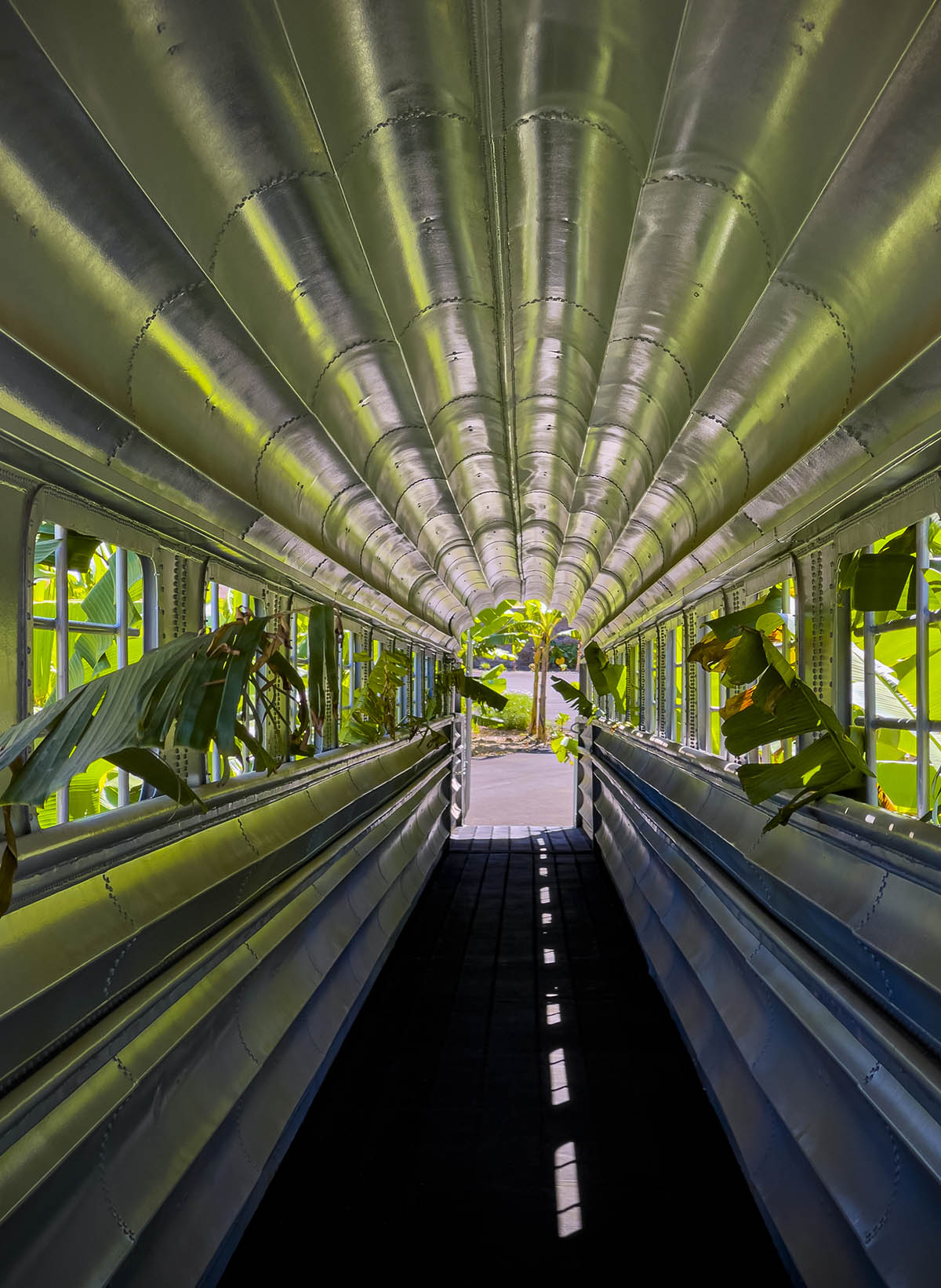 According to Menis's vision, the new banana trees garden that surrounds the industrial heritage vestige recalls the agricultural landscape prior to industrialization, staging the city as a place of coexistence for the different eras, cultures and sensibilities that have shaped Santa Cruz de Tenerife's identity. 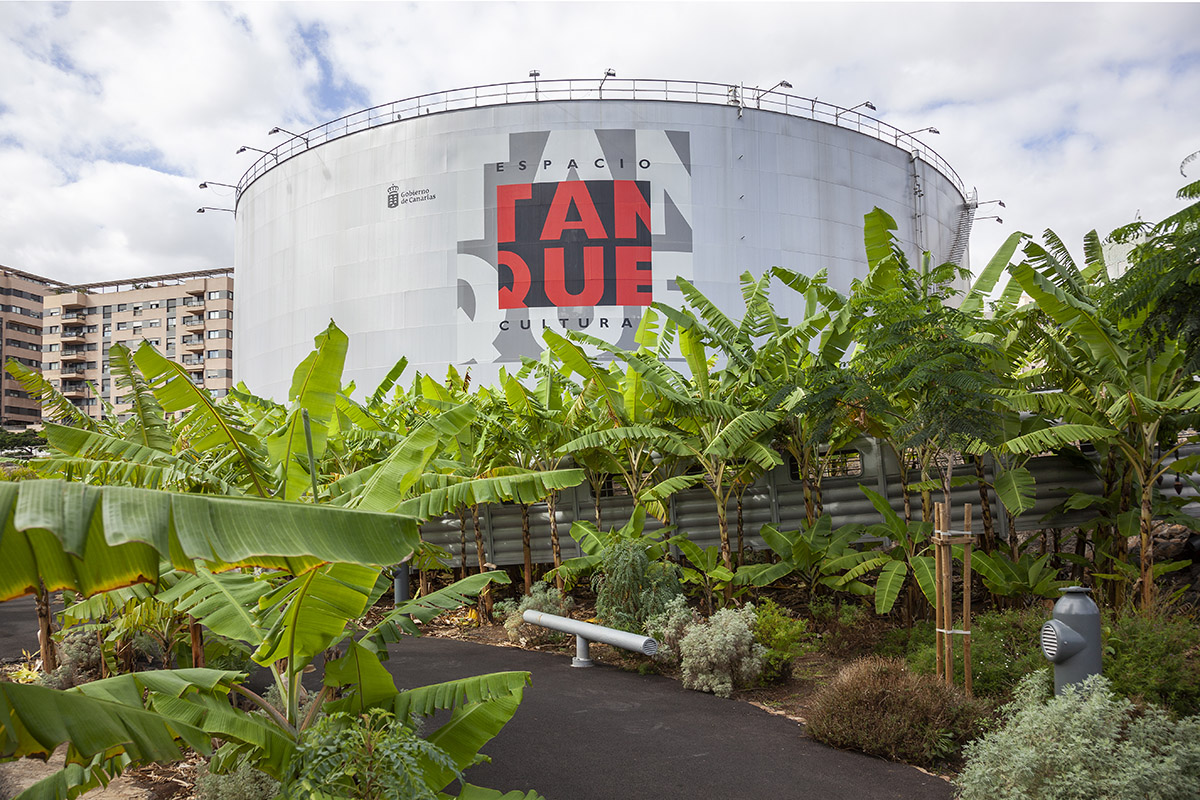 The El Tanque Cultural Space is the former tank 69, a huge container that served for many years for the refining and storage of crude oil, integrated into the CEPSA refinery, the first in Spain, which was built in Tenerife around 1930.

It is a cylindrical piece 50 meters in diameter and almost 20 meters high that represents one of the last vestiges of an industry that, in the last half century, has formed part of the urban geography of Santa Cruz de Tenerife.

It retains its original exterior and interior appearance, having been adapted to its new cultural use with minimal architectural intervention by recycling and incorporating scrap materials. 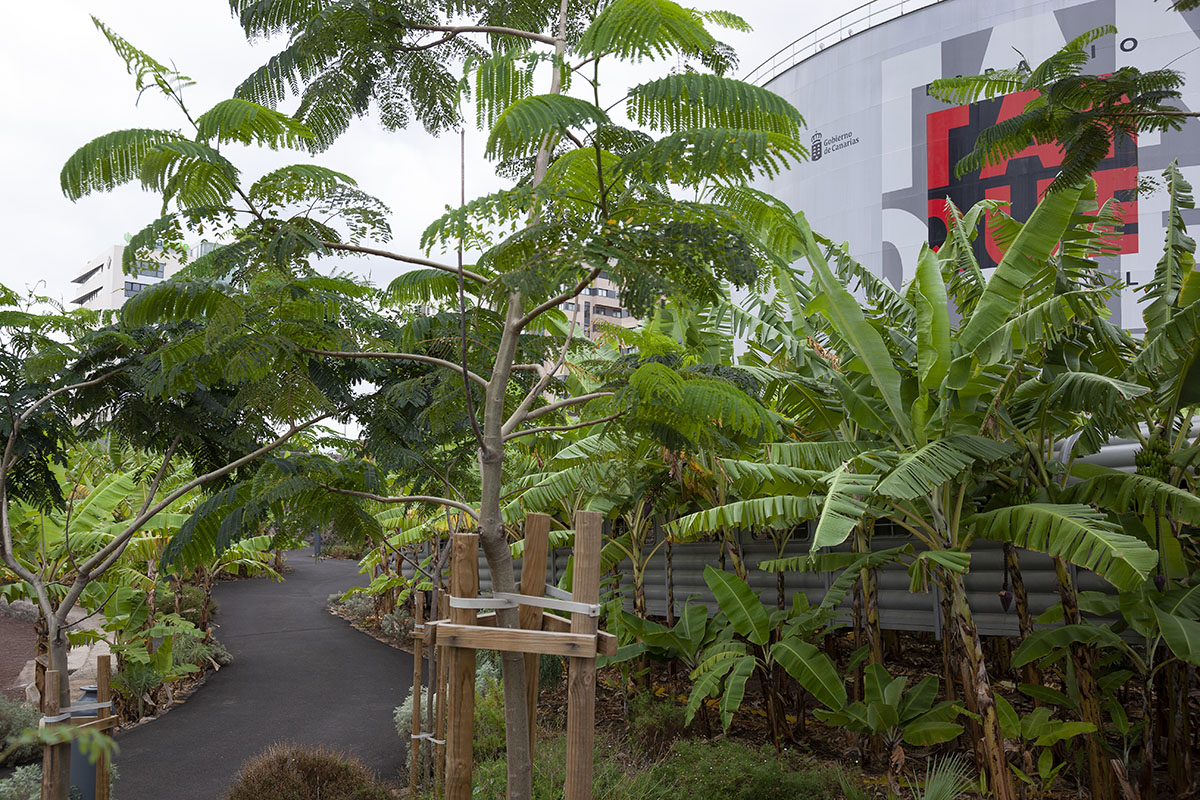 Thus, an old ferry bridge abandoned in the city's port has been recycled for access; the entrance door to the space and the interior ramp has been built with large metal sheets retrieved from other dismantled containers; and the skylights have been made with empty CEPSA barrels adapted to their new use. 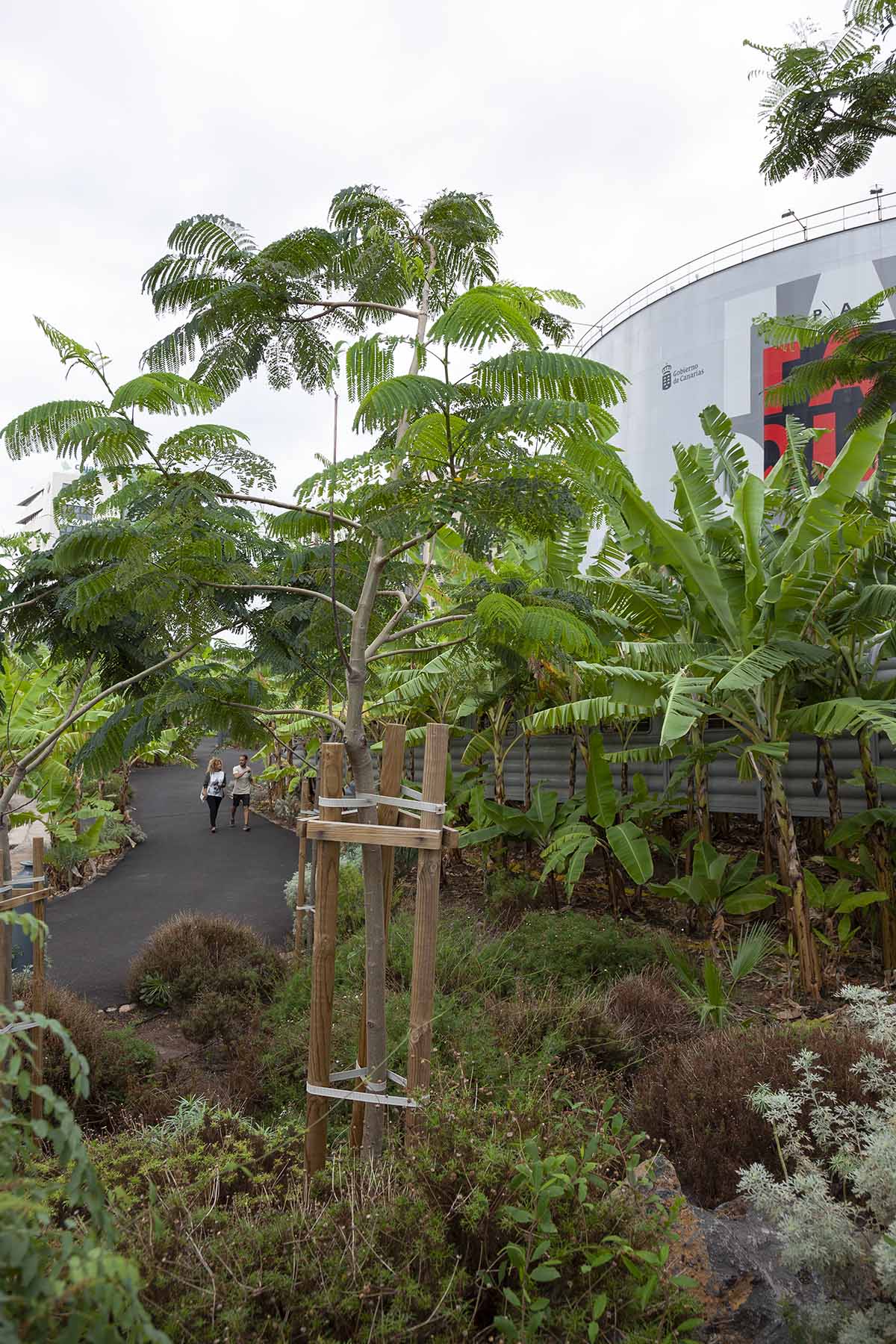 At a time when the urban growth of the city had already turned the industrial zone occupied by the CEPSA refinery into a residential neighborhood, the conservation of the tank in its original location that is the Cabo Llanos neighborhood of Santa Cruz de Tenerife, was a story of activism spanning from 1997 to 2006 when, for the first time, it was recognized in the city's urban planning documents.

The El Tanque Cultural Space received several awards that recognized the quality of its remodeling and, during its 25 years of existence until now, it has hosted from exhibitions, performances and on-site installations to cinema, theater, classical music and pop rock concerts.

It is also the venue of the prestigious KEROXEN Electronic Music Festival that is held annually. However, the surroundings of the Tank have not received the necessary attention and have been left almost abandoned for two decades, as it has happened with many other public spaces in the same neighborhood, which were born after the liquidation of the refinery. 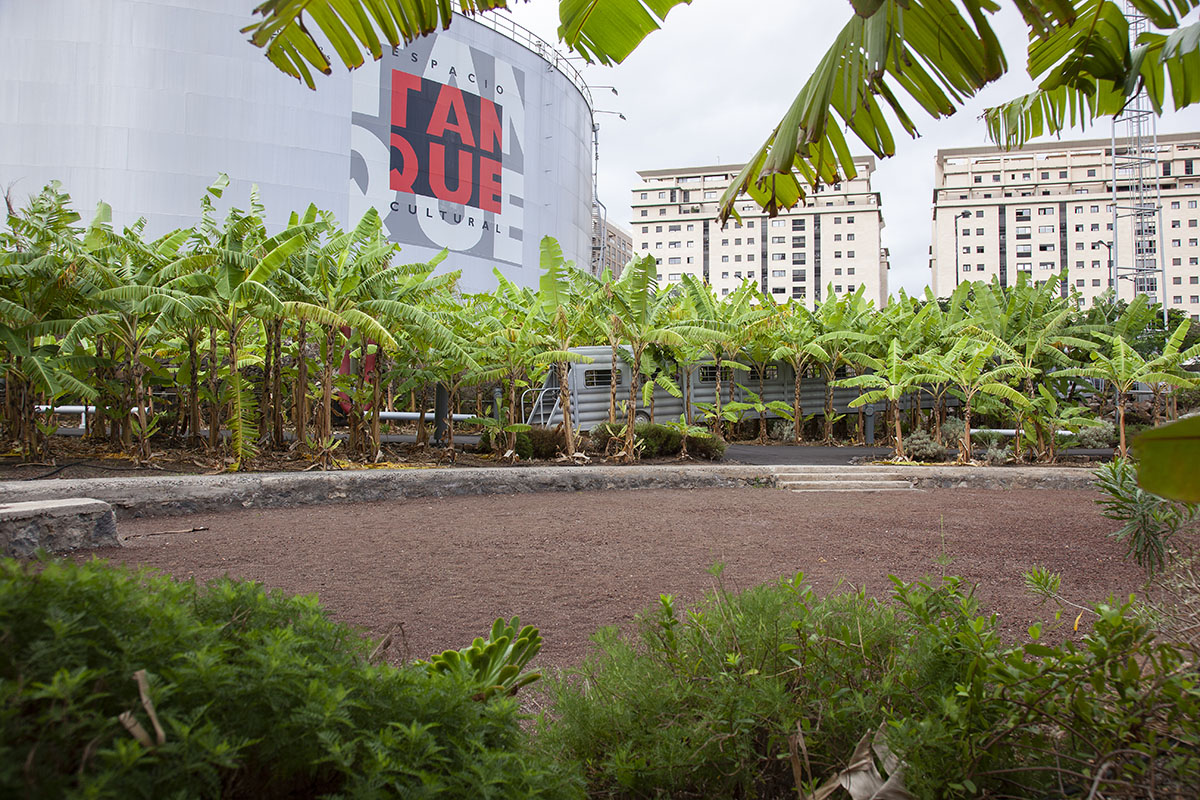 Coinciding with the preparation, a few years ago, of the 25th anniversary of this singular cultural space, the Association Amigos del Tanque went one step further and promoted the creation of a garden that would occupy its surroundings: not only had they managed to leave a trace of the industrial history of Santa Cruz - the Tank itself - but now they were recovering another layer, the agricultural history, which disappeared from the city at the beginning of the 20th century.

Subsequently, it obtained the support of the Government of the Canary Islands, which assumed the cost of rehabilitating the environment, to give rise to the first green public space in the Cabo Llanos neighborhood. 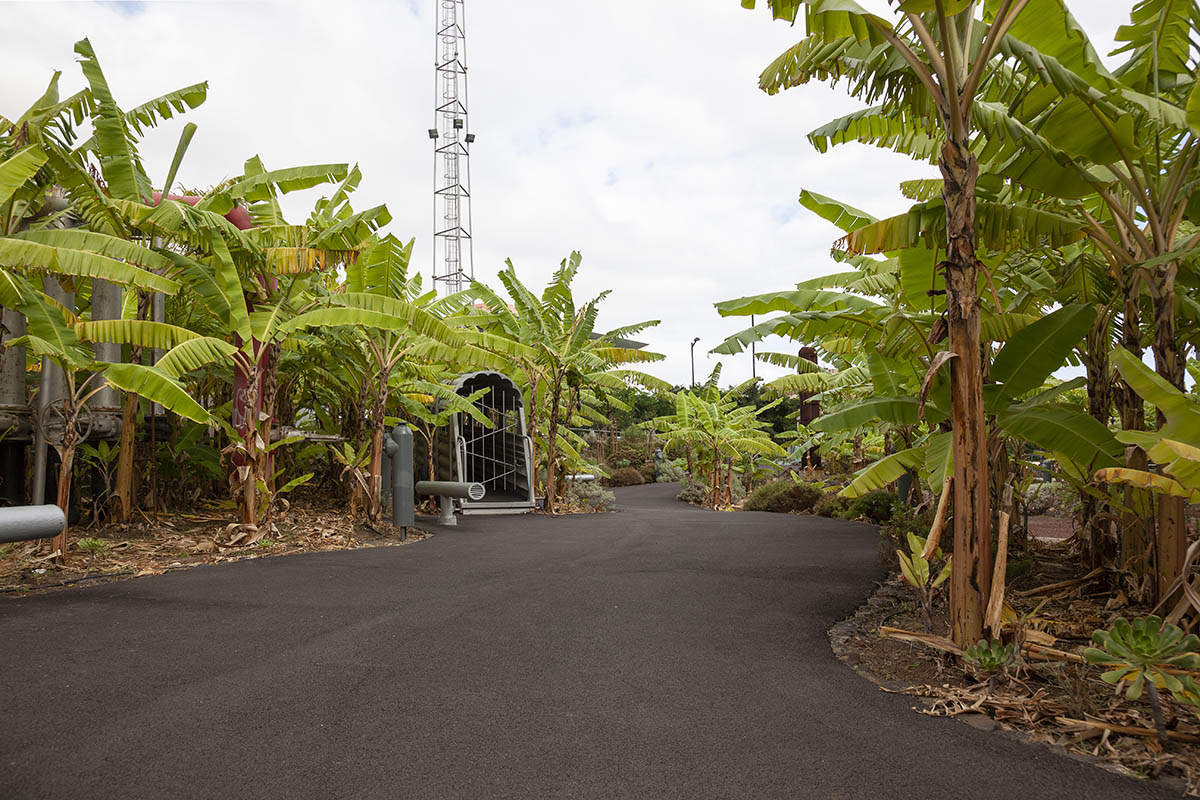 It should be noted that the public garden of the Tank would not exist today if it were not for the resistance movement that the Association maintained against those who wanted to demolish the former oil depot to replace it with a simple private housing building, 10 stories high and bland architecture.

The process demonstrates that a city is not made only by politicians, urban planners and architects, but also by committed citizens.

The perimeter of El Tanque has been covered with banana trees as a way of remembering the agricultural activity that existed in this area before the CEPSA refinery was located here in the 1930s. 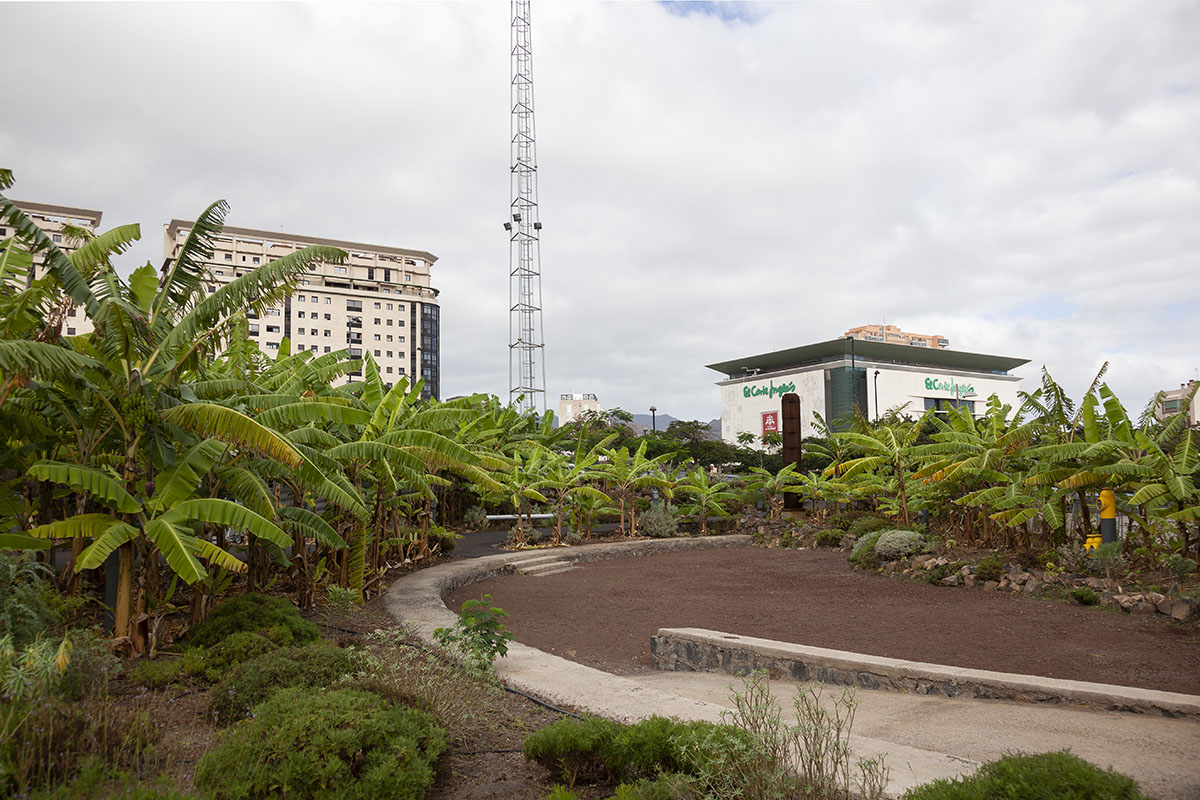 In the vision of the architect, residents and visitors will be able to sense the evolution of the place through a surprise effect: as time has passed, from May 2022 until now, the exuberant subtropical vegetation has been colonizing the industrial relic, framing its fascinating presence while restoring the memory of the agricultural past to build a sense of cultural continuity and belonging.

Fernando Menis's landscape design is based on a botanical approach that seeks to create a garden with high biodiversity in a neighborhood that completely lacks public green areas. Thus, more than 700 trees have been planted, including cypresses, flamboyants, Roystonea Regia palms, Monstera Deliciosa, Ficus Repen and shrubs, as well as areas with aromatic plants.

However, most of the trees are Musa Paradisiaca, a tribute to the old banana plantations that occupied the site before they were converted to industrial use. This type of banana tree grows fast, reaches 7 m high , usually flowers in summer and needs to be oriented towards the sun, so the chosen place is ideal. 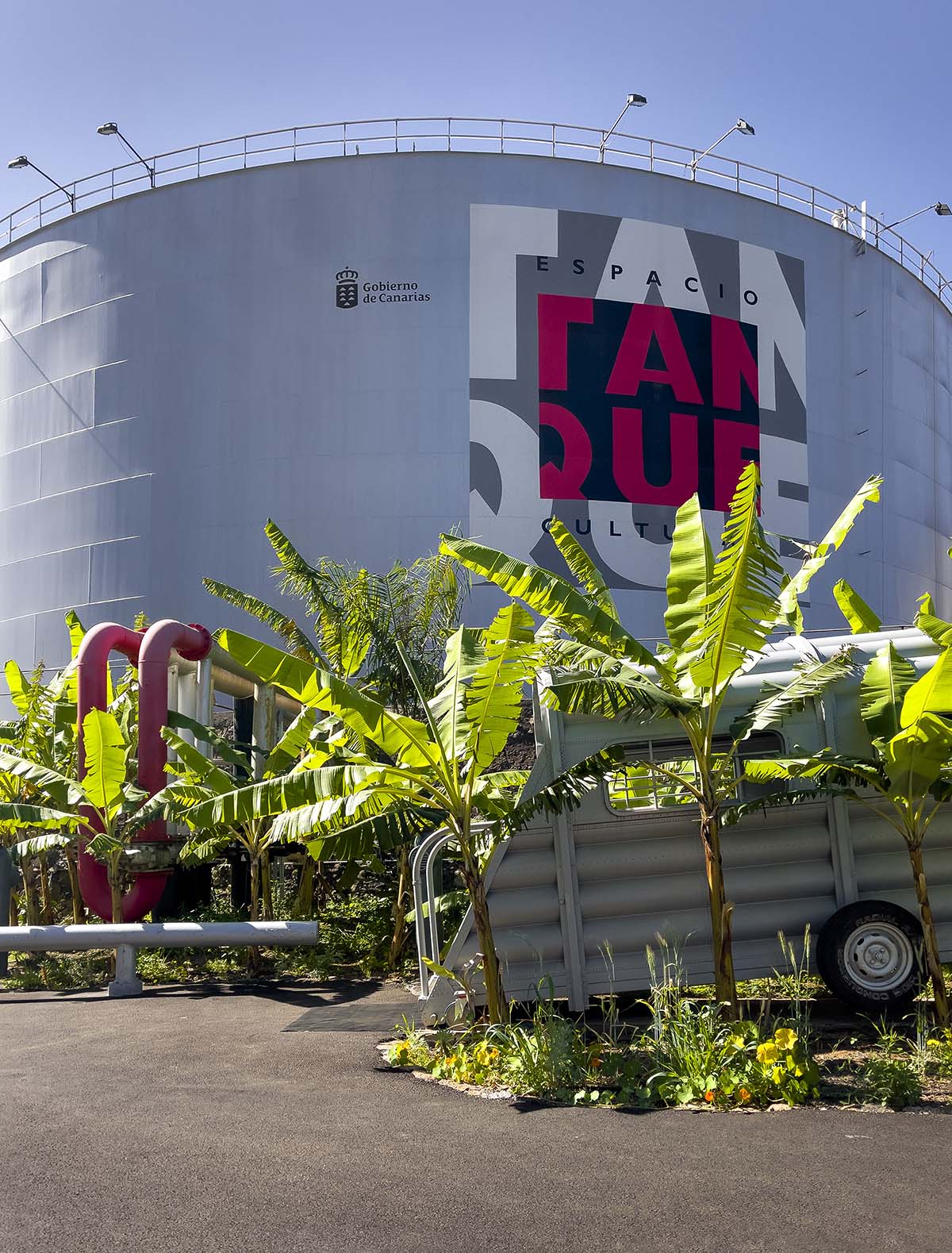 "Our research work has confirmed that this area was agricultural and was full of banana and tomato farms, as well as coast plants such as tabaibas, cardones, verodes, etc., all of them native plants of the Canary Islands, which require little watering, are resilient and durable," explained the architect Fernando Menis.

"By looking back into the agricultural history of Santa Cruz, which had disappeared in all its coastal areas, the area around El Tanque has been planted with banana trees of the Musa paradisiaca species, while the tomatoes have simply come out, since there must have been vines over 90 years old, incredible survivors of an entire industrial era, which, after having prepared the land and with some watering, have grown again because the earth, the soil, has got memory, although sometimes we forget it," Menis added. 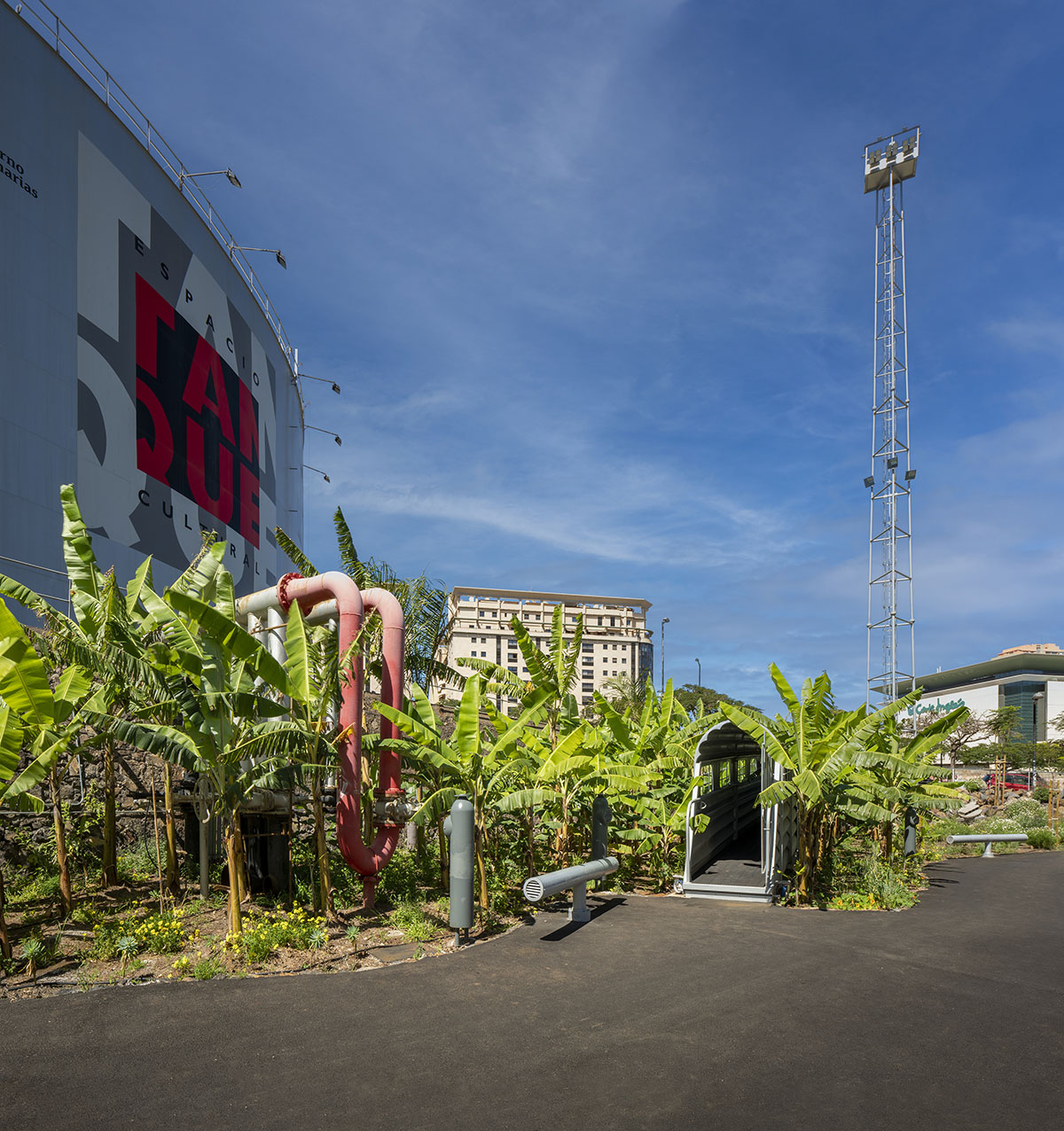 These are the species that predominate in the Jardín del Tanque, making up what has been called an ecological restoration, although not on a large scale but rather creating a small public square-garden around a cultural space. In the vegetation, a single concession to the nostalgia that oozes the industrial ruin was included, incorporating some cypresses that will wrap a corner of the iron structure of the Tank in green.

It is a natural species, adapted to the Canary Islands and harmless to the rest of the species that accompany it. Strategically planted to mark the perimeter of the historic wall of the reservoir, the cypresses will reach 20 m high and about 60 cm in diameter, so that they will look like the guardians of the place and will bring a certain monumentality to the entire compound.

Pyramid shaped and fast growing, from its earliest years, these evergreen trees allow residents to enjoy a green environment while waiting for the rest of the vegetation to grow. 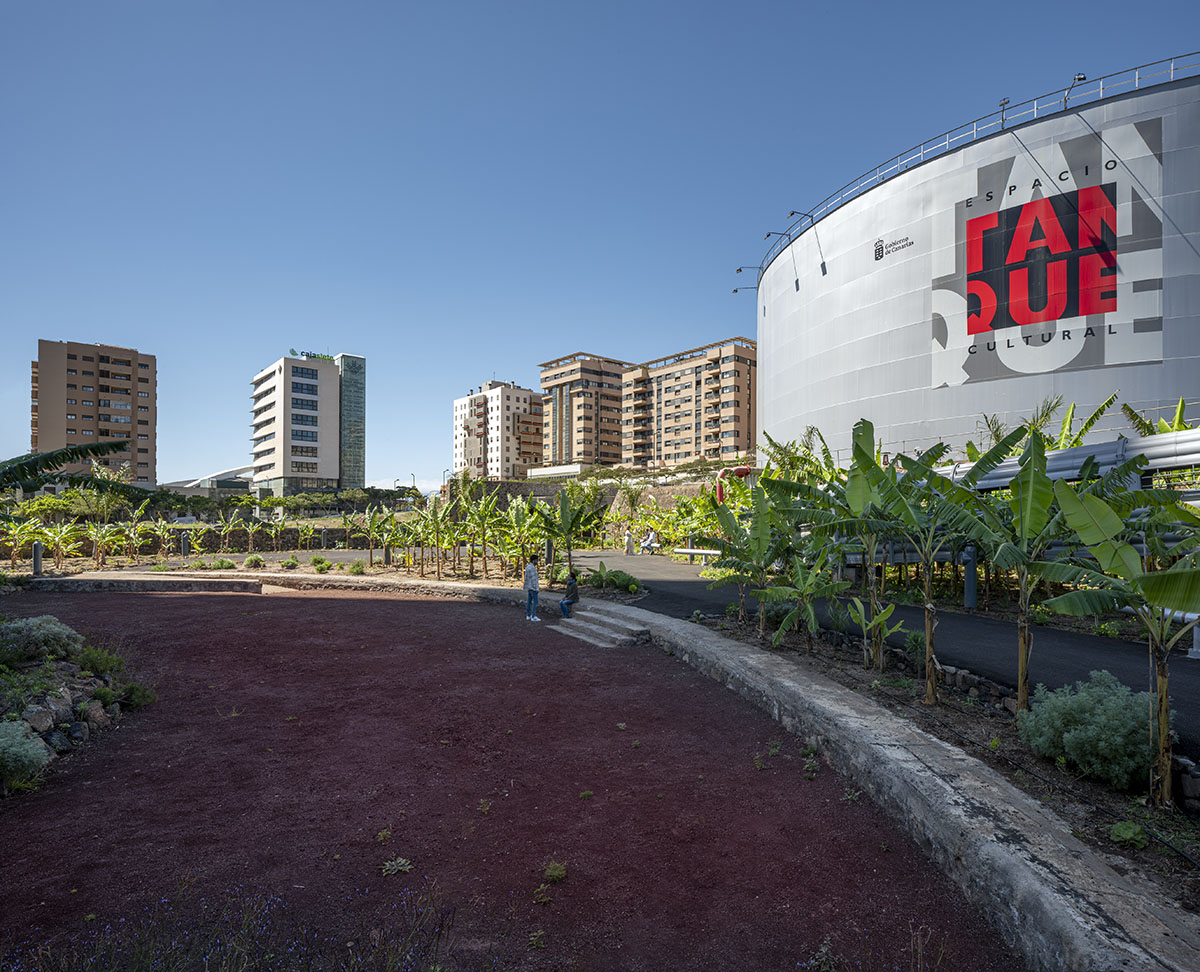 Following the same line of re-use and recycling that he already applied in the rehabilitation of the El Tanque Cultural Space, for the garden, the architect designs the lighting and furniture elements with waste.

Thus, divers' oxygen bottles are recovered from the garbage and adapted to be used as lamps. And, since one of the main users of the garden are children, the lamps' appearance may reming the Minions, the cartoon characters so much loved by children. 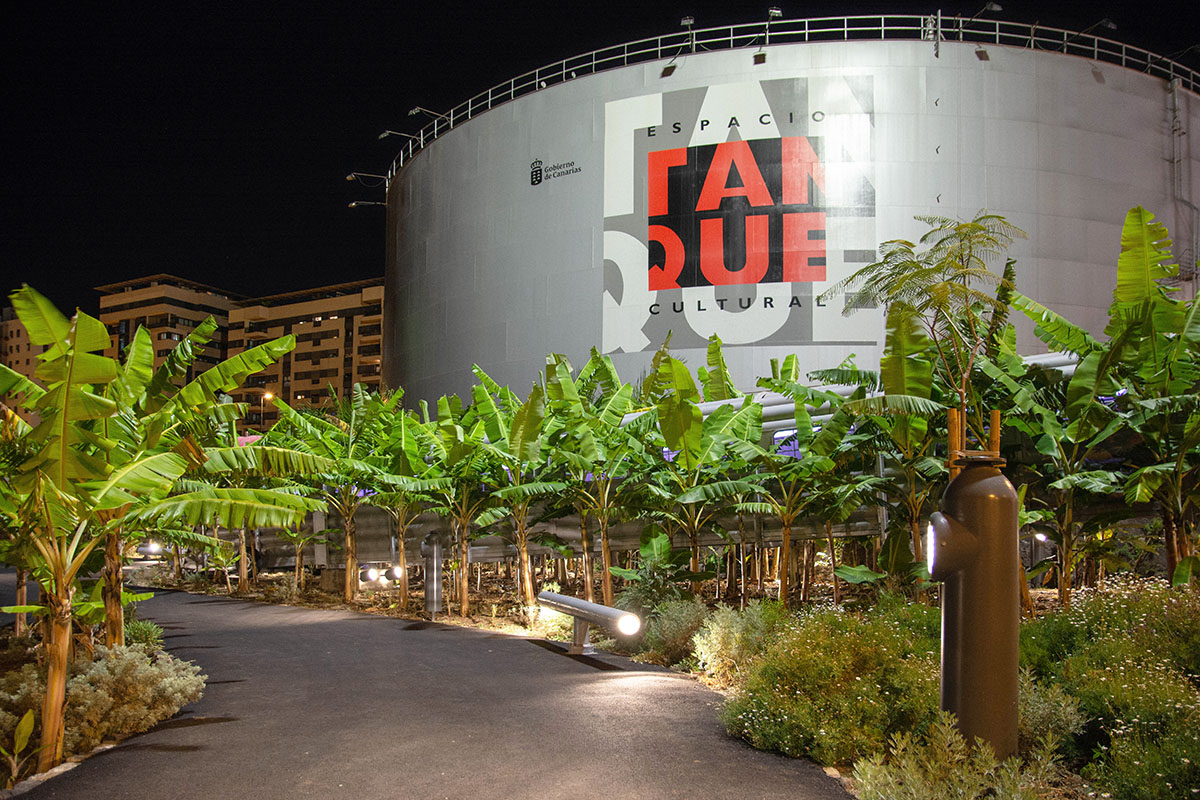 Care for the environmental impact is also perceived in the orientation of the lamp so that it avoids light pollution, as well as in the watering of the greenery, which is supplied with recycled water. 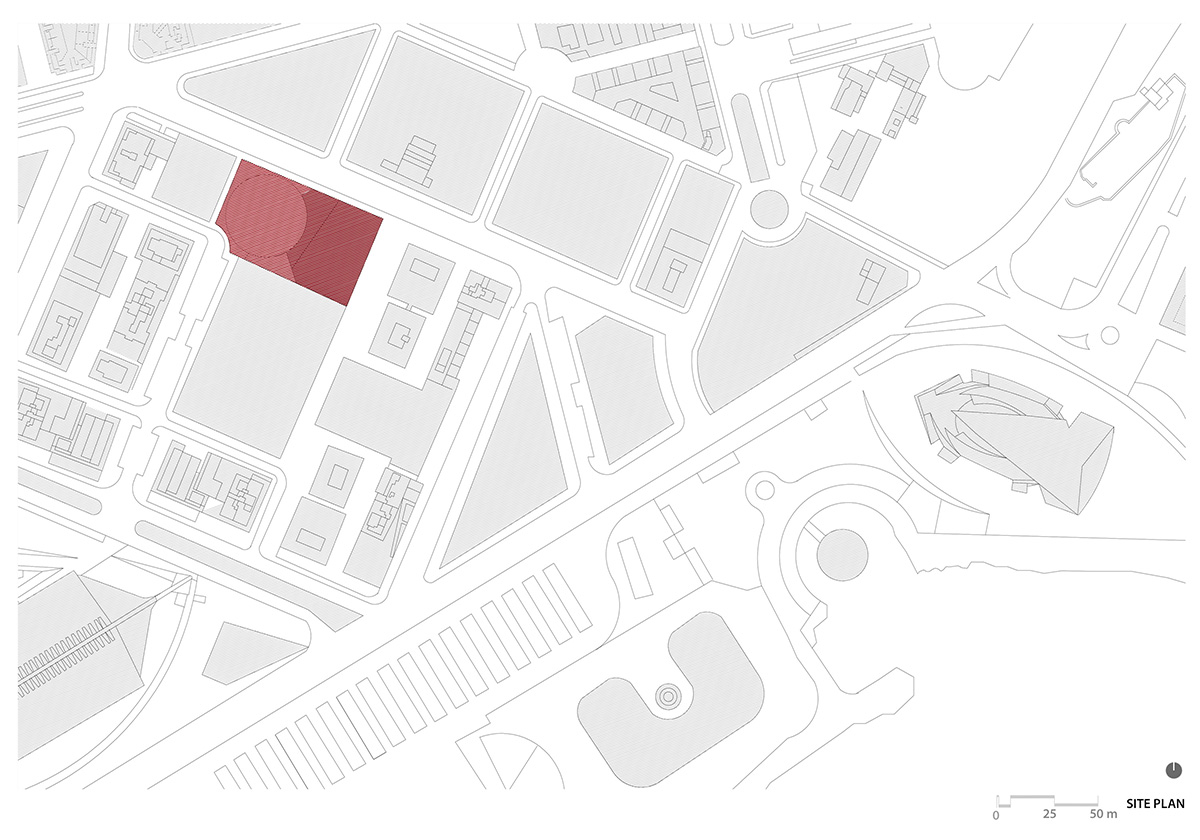 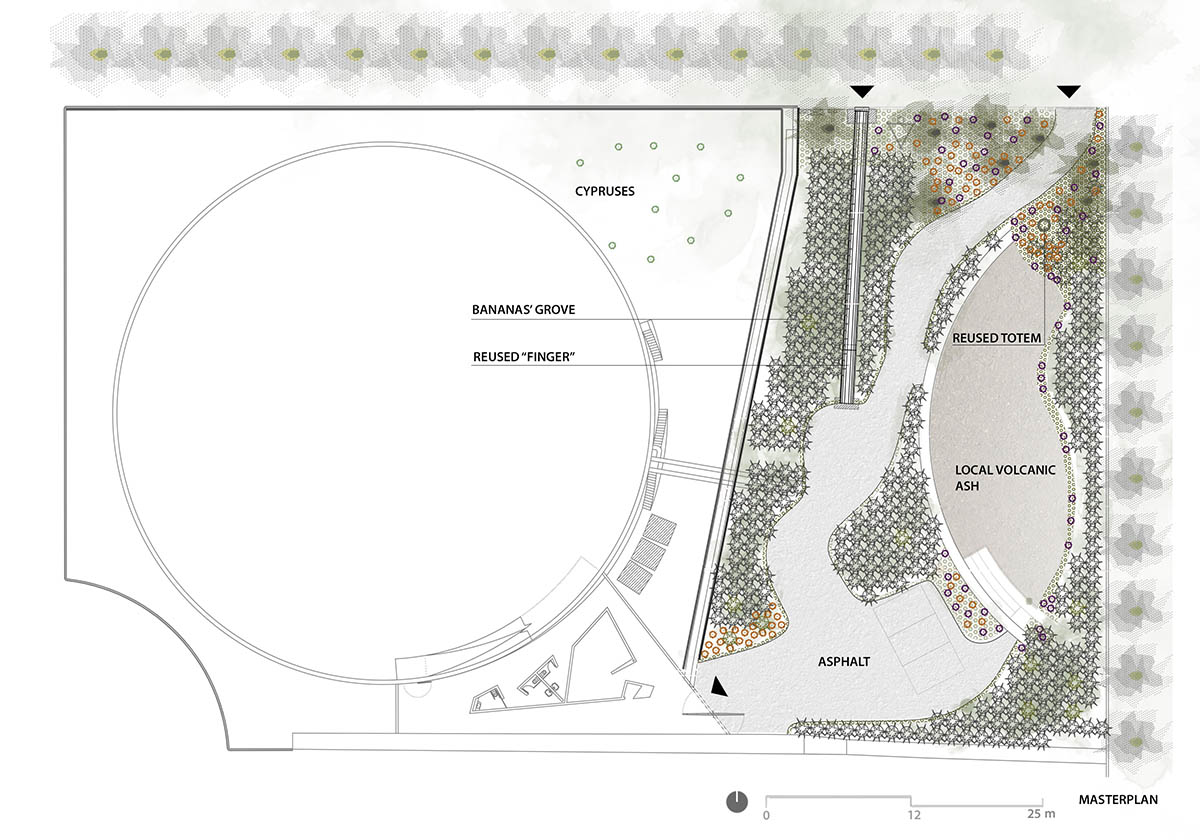 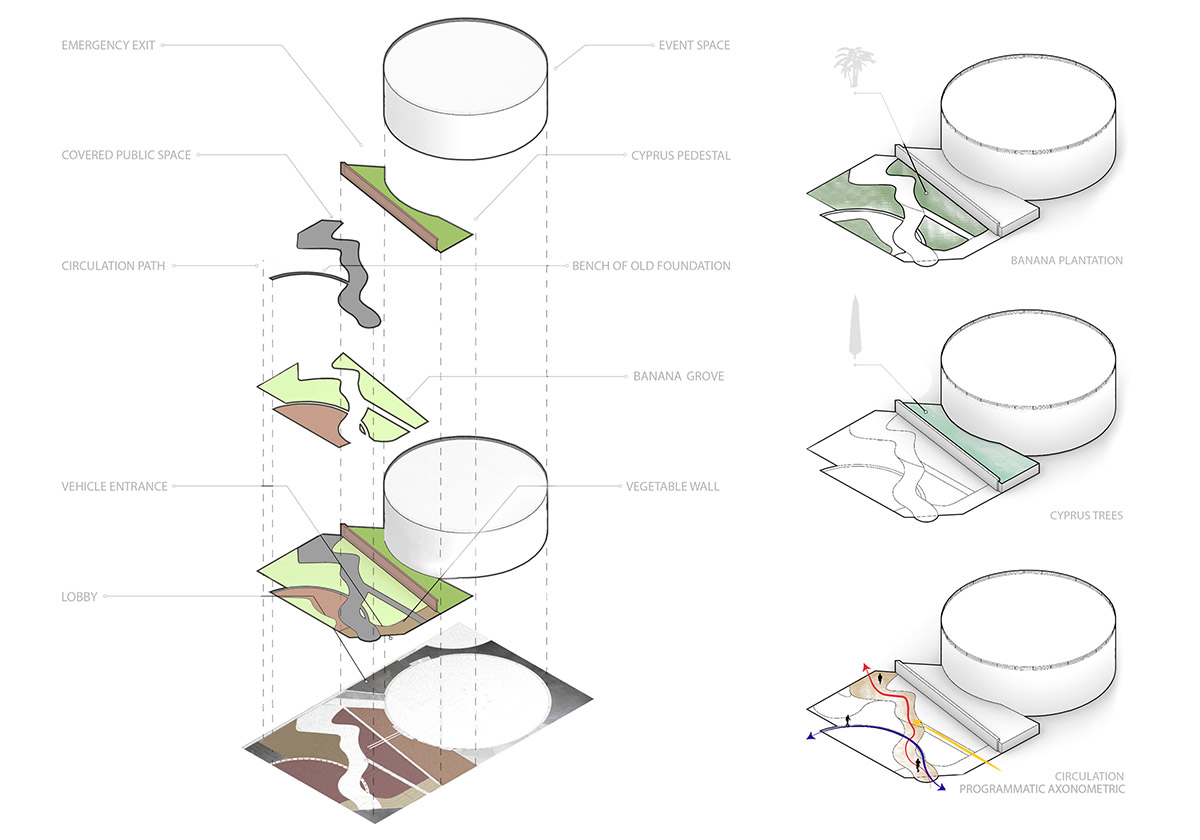 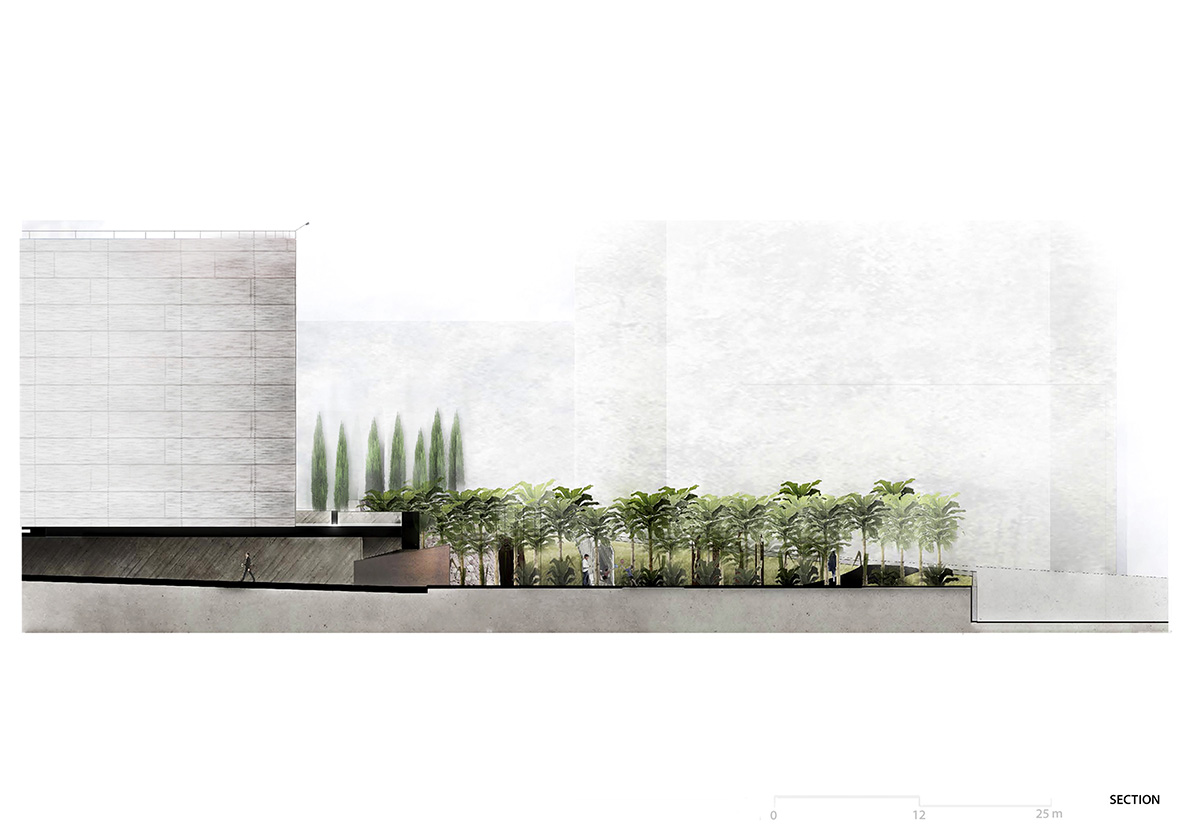 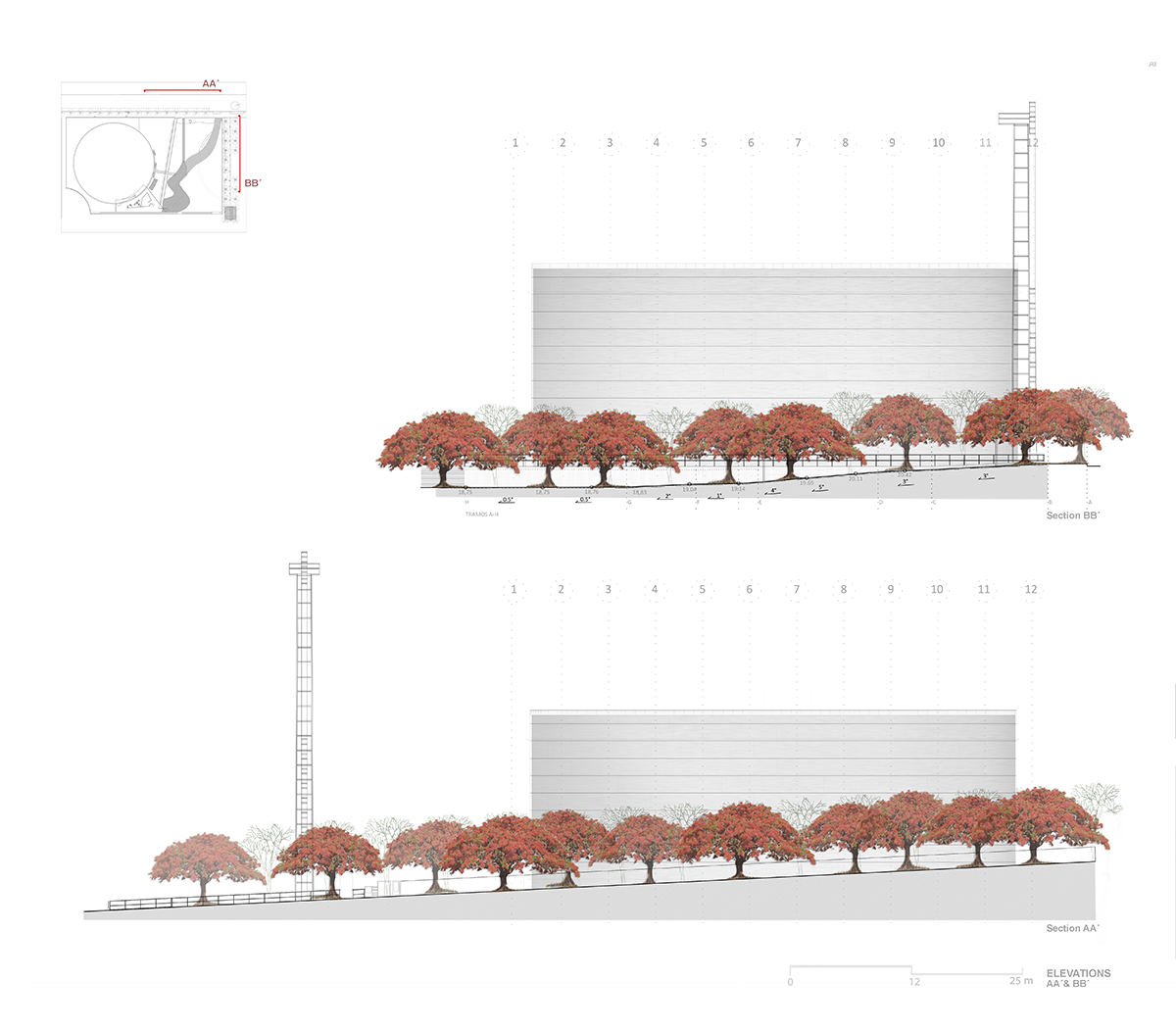 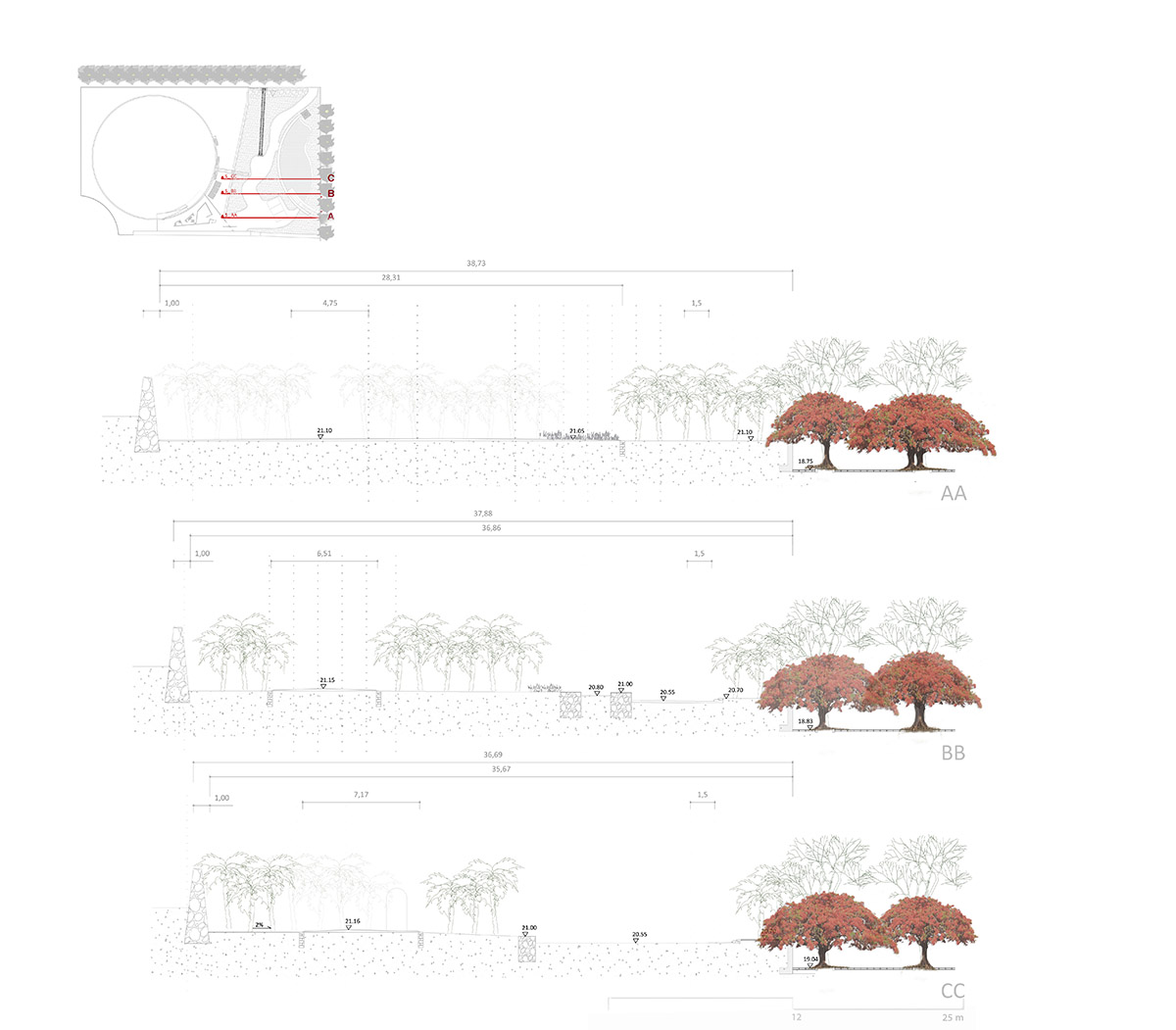 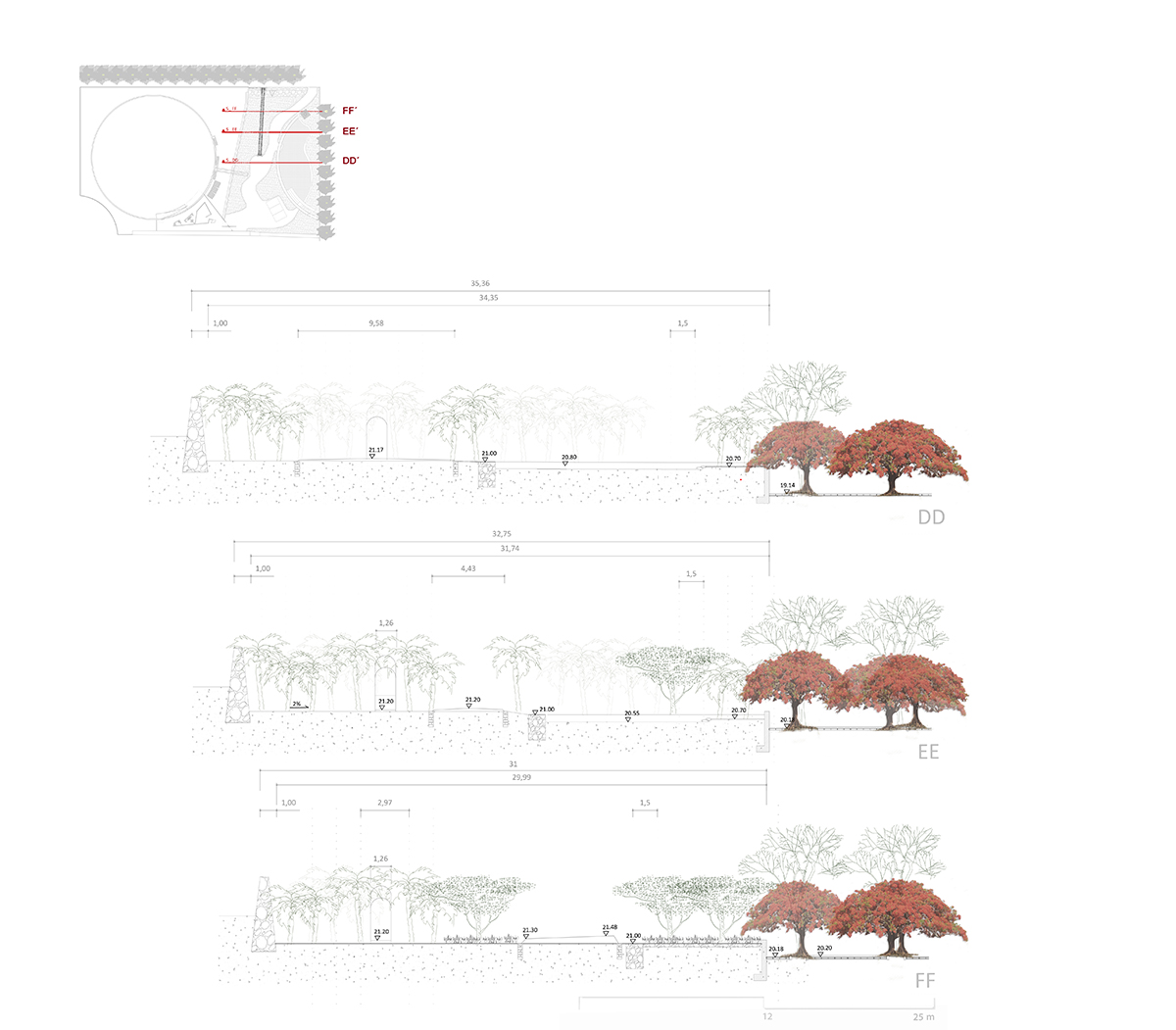 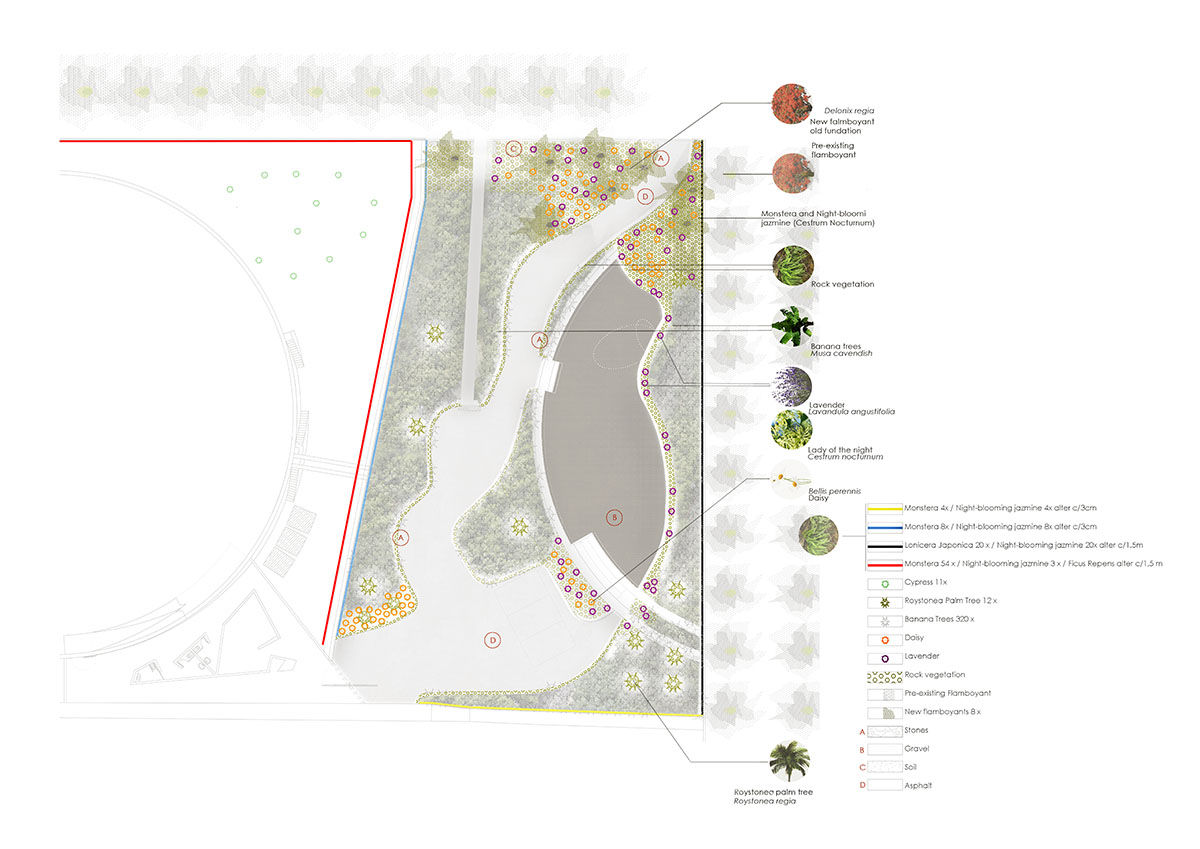 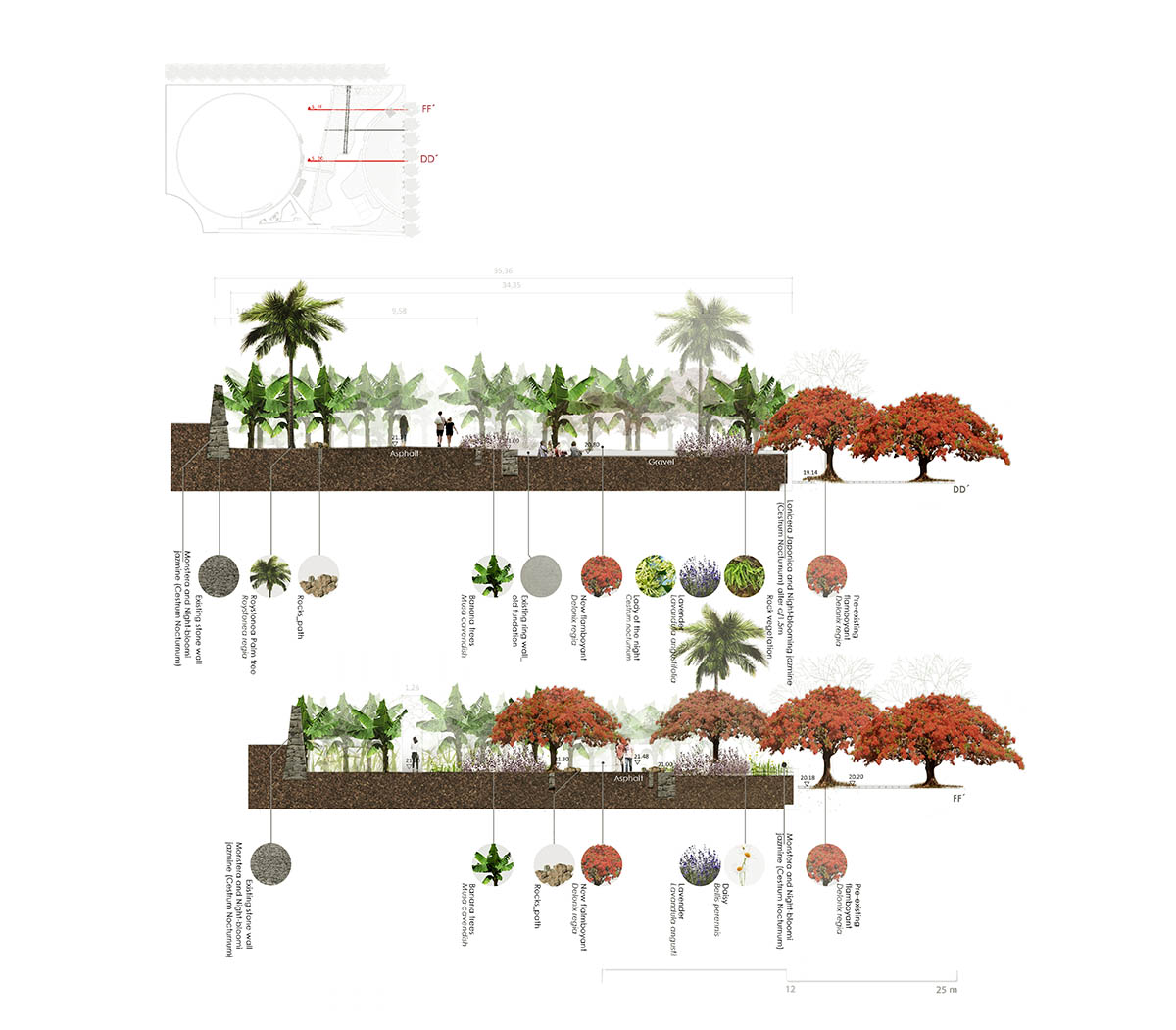 Menis Arquitectos completed a church and a community centre with four massive volumes resembling large restless rocks on Canary Islands of Spain. The firm was selected to redesign a second headquarters of the Rodin Museum in Tenerife, Spain.