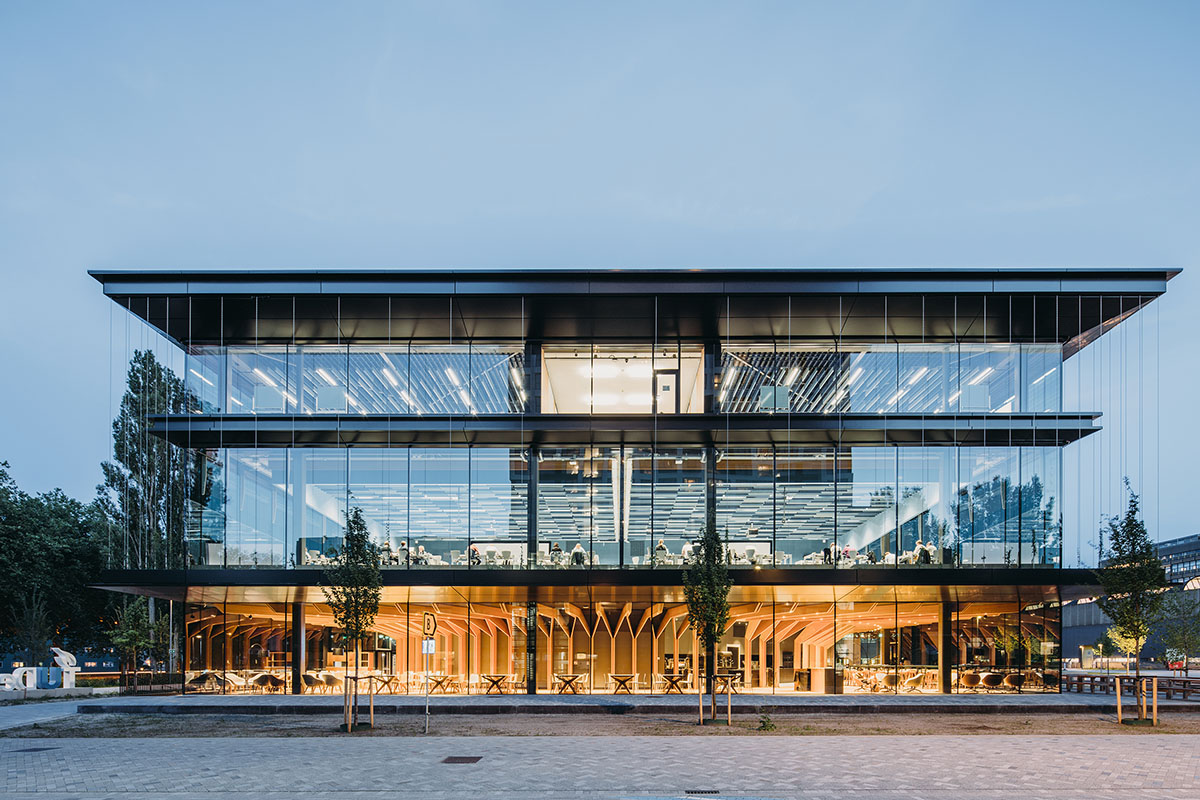 UNStudio has completed a new interfaculty teaching building at the TU Delft in Delft in the Netherlands.

Named Echo, the 8,844-square-metre building is described as "the most sustainable building" at the TU Delft campus with its circular design approach by offering a high-degree of flexibility.

Conceived as an energy-generating interfaculty building, the fully-glazed building offers a wide variety of teaching rooms to cater for the diversity of teaching methods and study styles at the university.

Echo is aimed to contribute to the university’s ambitions to operate a fully sustainable campus by 2030. 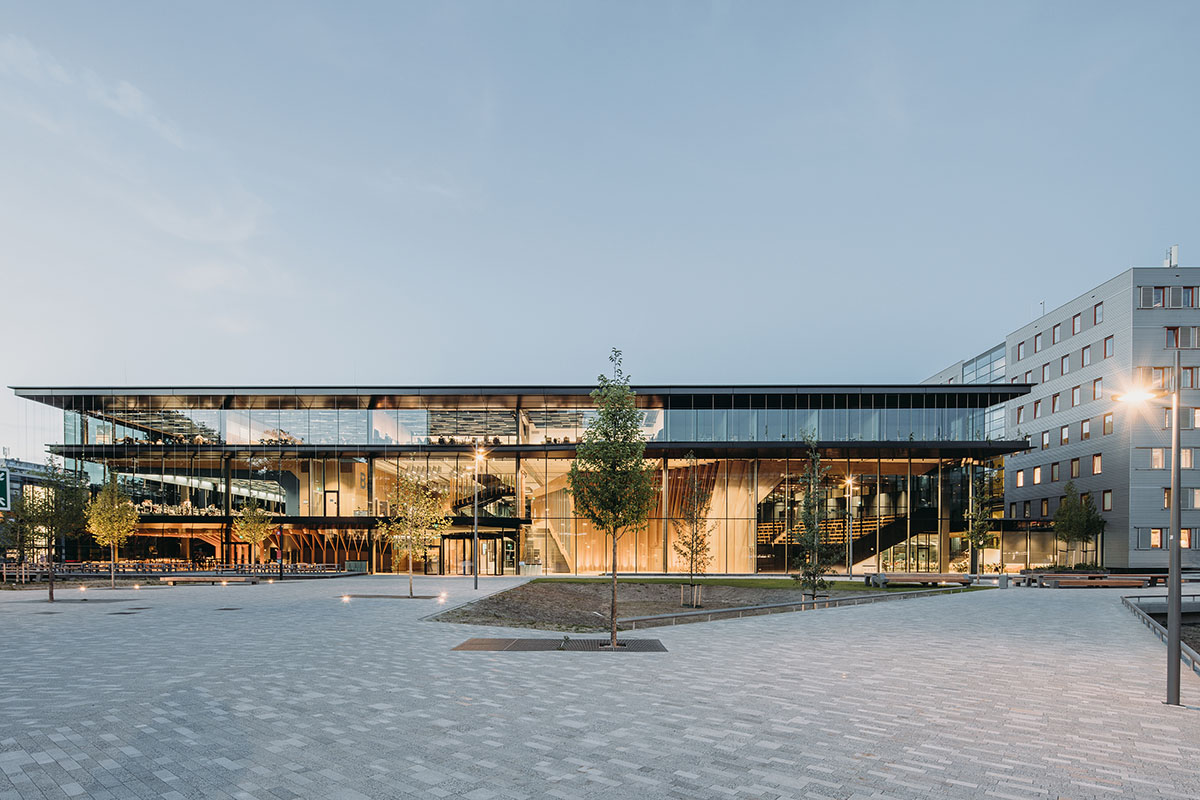 "The Echo building teaches by example. In this highly compact building, the use of space is maximised, while bringing students from different disciplines in closer contact," said Ben van Berkel, founder of UNStudio.

"Not only can they condense their learning experience and learn from each other, but they can also learn from the building itself," Berkel added.

Completed in collaboration with structural engineering firm Arup and building cost consultant firm BBN, and the design is adapted to different educational typologies and teaching methods with an energy-generating building in which adaptability and the wellbeing of the user are central. 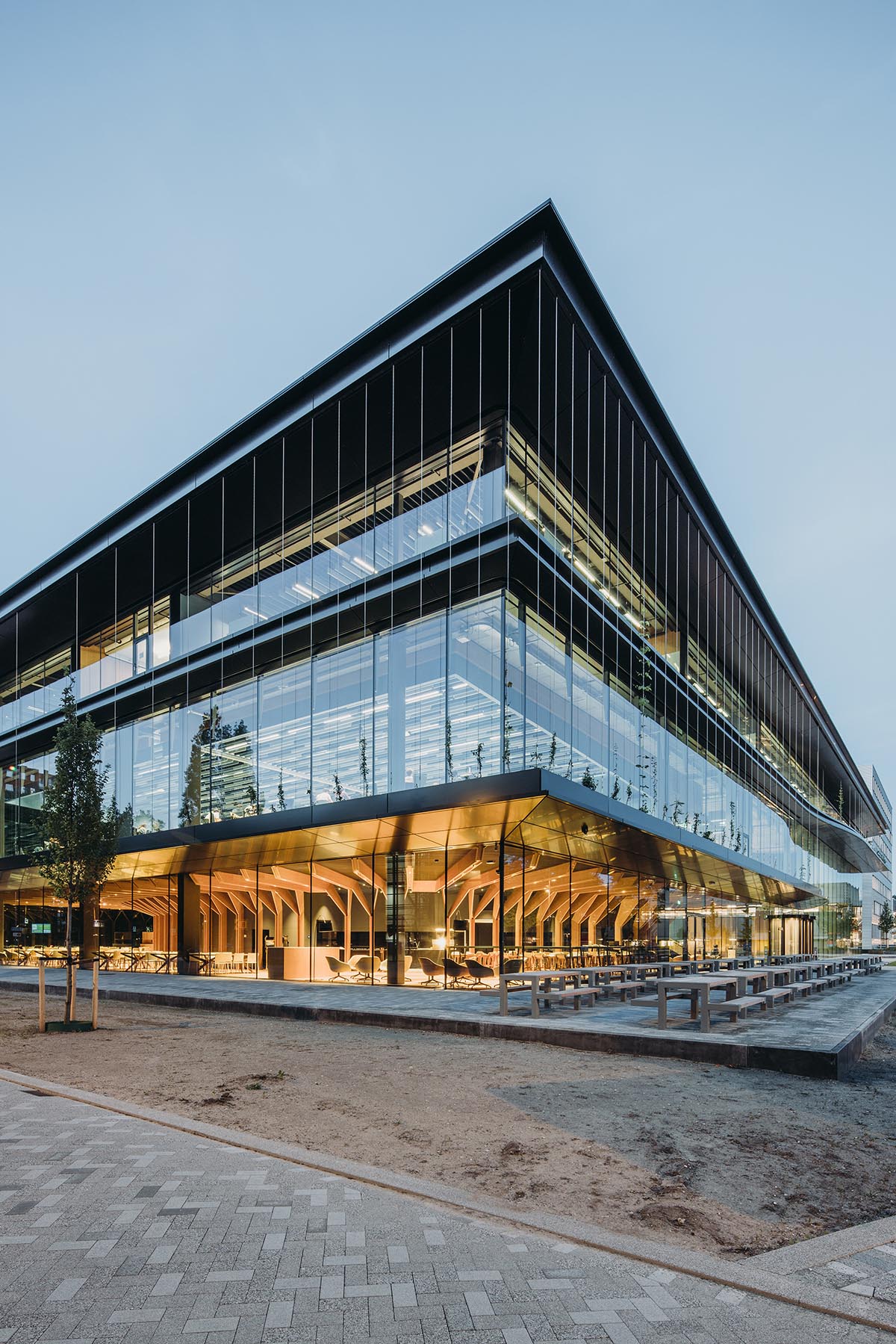 Ben van Berkel said that "Unlike traditional campuses that operate in silos, the future campus needs to be programmed with agile spaces that invite students and faculty to learn, collaborate and co-create."

"As student numbers continue to grow, educational buildings need to be extremely flexible, to operate through a model based on shared interfaculty use that can promote a more generalist education," he continued.

Since the building features 1200 solar panels, smart installations, good insulation and a heat and cold storage system, the building will be able to provide more energy than it requires for its daily operations, according to UNStudio. 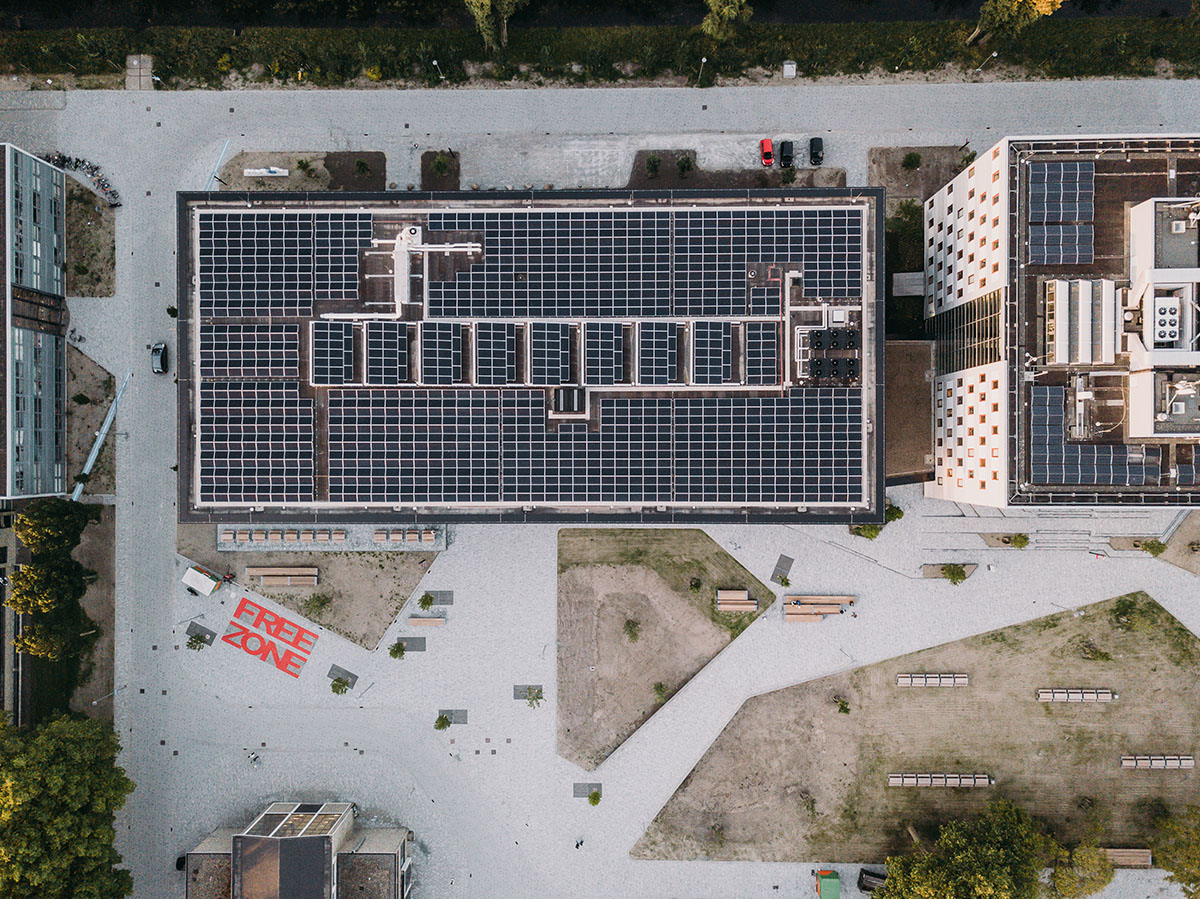 "This includes user-related energy, such as electricity consumption for laptops, lighting and catering. 90 per cent of the furniture used in the building has also been reused," said UNStudio.

UNStudio took the concept of transparency into the core of design of Echo. Through transparency, it not only ensures maximum daylight inside the building (known to have health benefits for the users, but also reducing the need for artificial lighting), the building also creates a visual connection to the wider campus and to surrounding nature. 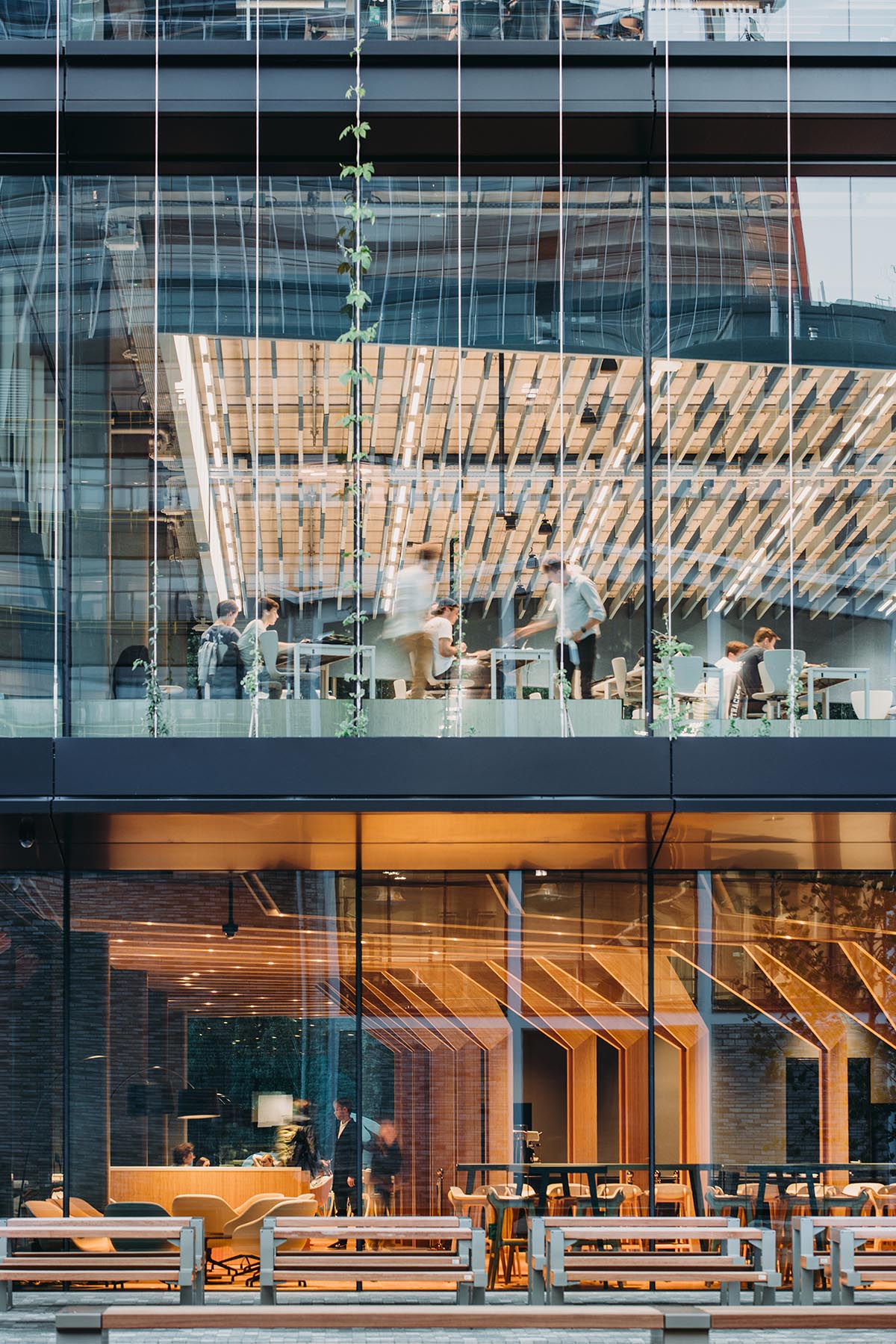 The office avoided the design of "a closed-in, institutional experience" for the users, while the open and public character of the building connects the two sides of the campus and provides a bright, uplifting and welcoming environment for faculty and students alike.

To avoid heat gain, sunlight penetration is prevented by a combination of sun protection and the low solar penetration factor of the glass in the façade.

In the façade, the studio added deep horizontal aluminum awnings that keep out excess solar heat. These canopies are interconnected by cables along which climbing plants form a subtle green facade that filters daylight. 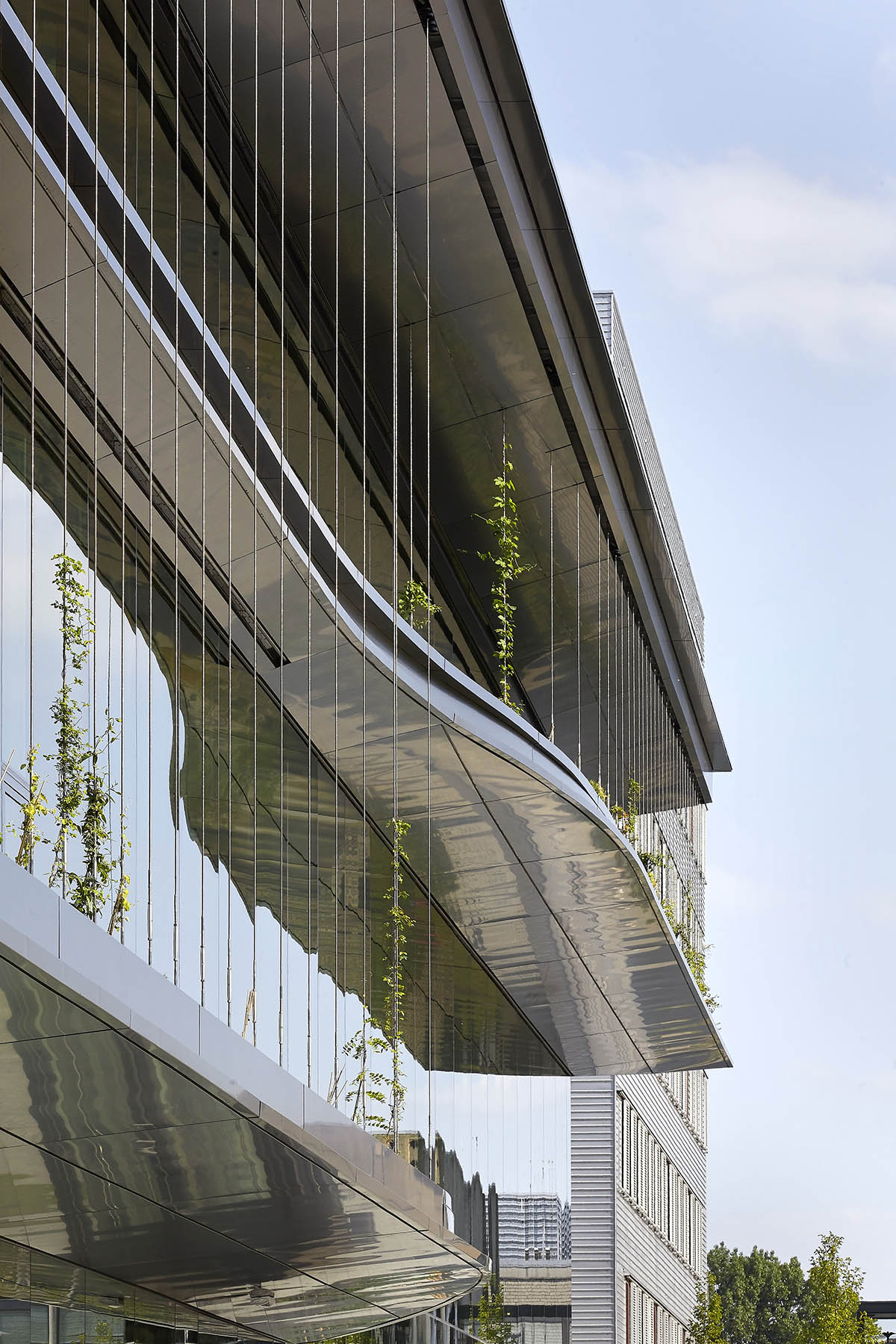 "To ensure clean air in the building, a plenum floor is installed above hollow-core slabs. Here fresh air is pumped up from the floor, rather than down from above, thus avoiding circulation around the room," added UNStudio.

"The vents for this system, along with the computer floor installation, can easily be relocated, should the layouts of the rooms change in the future."

"Not only has a great deal of attention been paid to the environmental impact of the materials used in the construction, but the building has been designed as much as possible according to principles of circularity," the studio added. 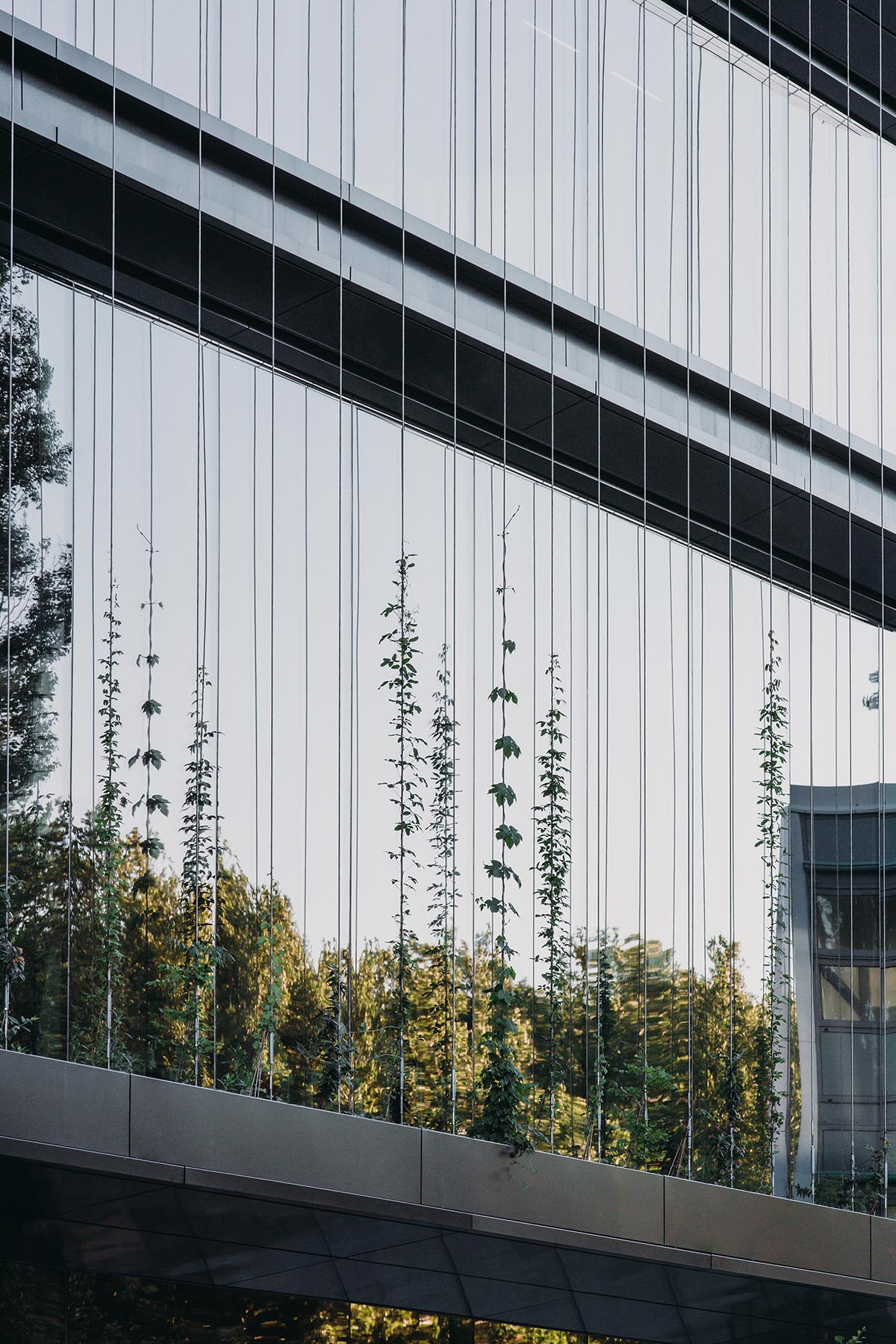 For example, the studio used large portal constructions with large grid sizes so that the columns can run along the edge of the building. This also creates column-free spaces with large spans.

The steel trusses have standard sizes and can be dismantled so that they can be reused elsewhere after the lifespan of the building. The hollow-core slabs can also be reused in the future. 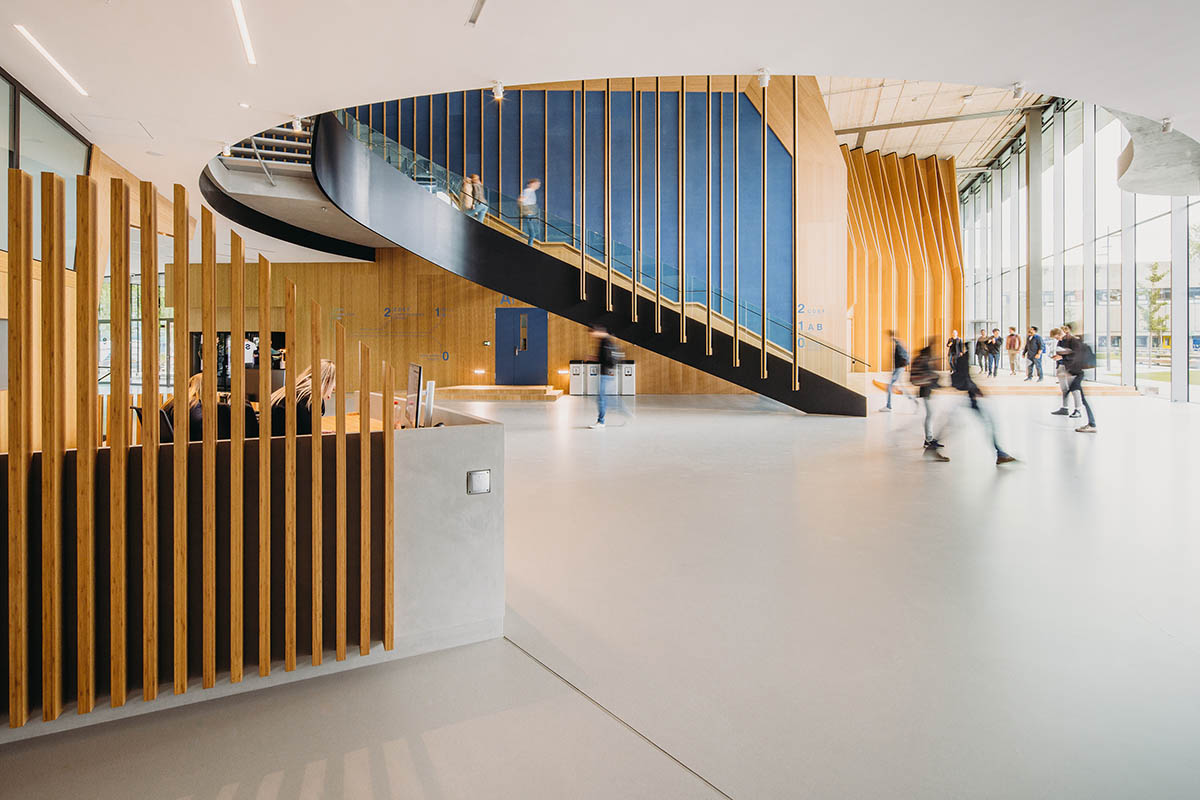 Echo supports the contemporary culture of "Everything Anywhere"

"The design supports the contemporary culture of 'Everything Anywhere', where the in-between spaces are also of great importance and physical movement is stimulated," said UNStudio. The interiors offer a warm colored palette that welcomes to visitors. At specific positions, bamboo ribs extend along the ceiling, forming an integral part of the design.

The crafted look and feel of the bamboo is extended around the central staircase, that in one gesture joins the study and cooperation spaces into one connected world of learning, collaboration and connection. This centrally positioned 'grand stair' facilitates and promotes physical movement through the building and thus contributes to the health of students, researchers and teachers alike. 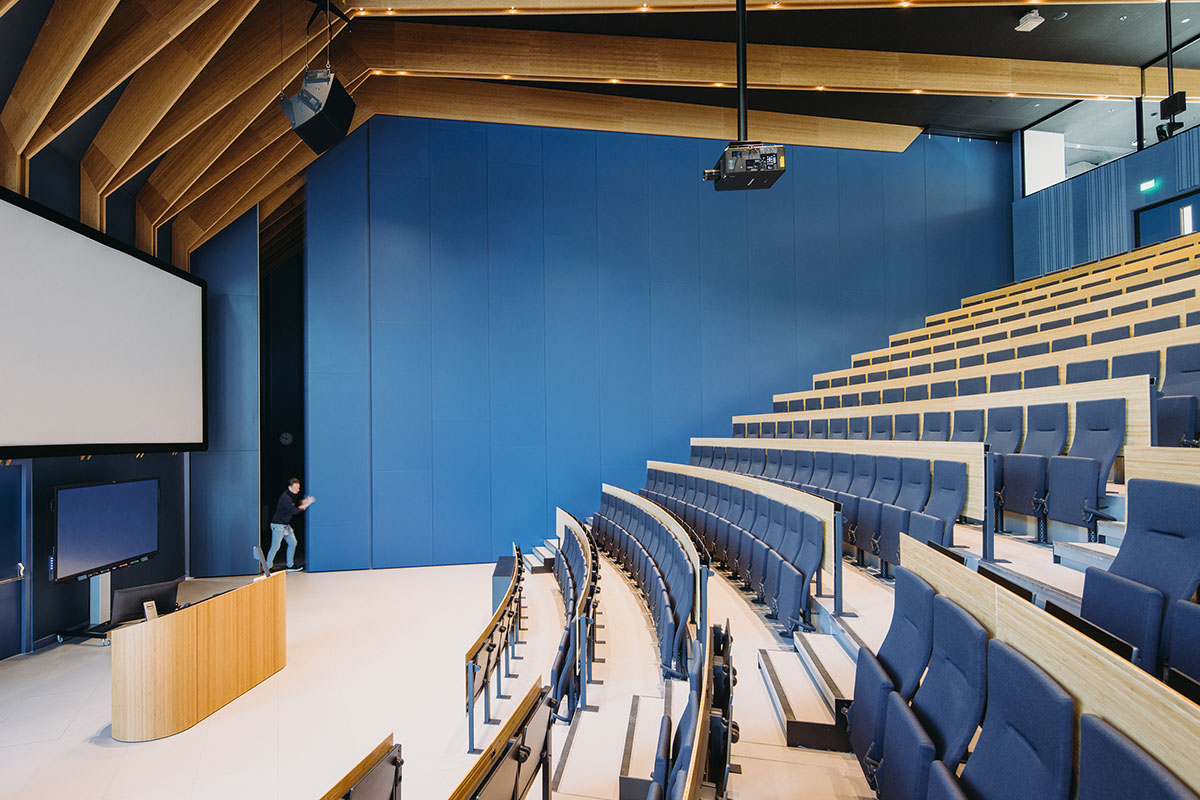 Described as "a future-proof campus" that is an active campus. Echo not only connects with the surrounding public space, it also defines it.

The adjacent square continues through the transparent ground floor of the building and connects with the street on the other side, turning the ground floor of Echo into a covered public square and a public connector that makes the invisible world of learning a visible and engaging experience. The building consists of two sculptural volumes - one is the large 700-person Lecture Hall and the other is the Debate Space - which are visible from the ground floor and accessible to people across this covered square.

The diagonal orientation of these volumes simultaneously defines two large transparent corners, one housing a restaurant with terrace opposite the D:Dreamhall, and the other a large study landscape. 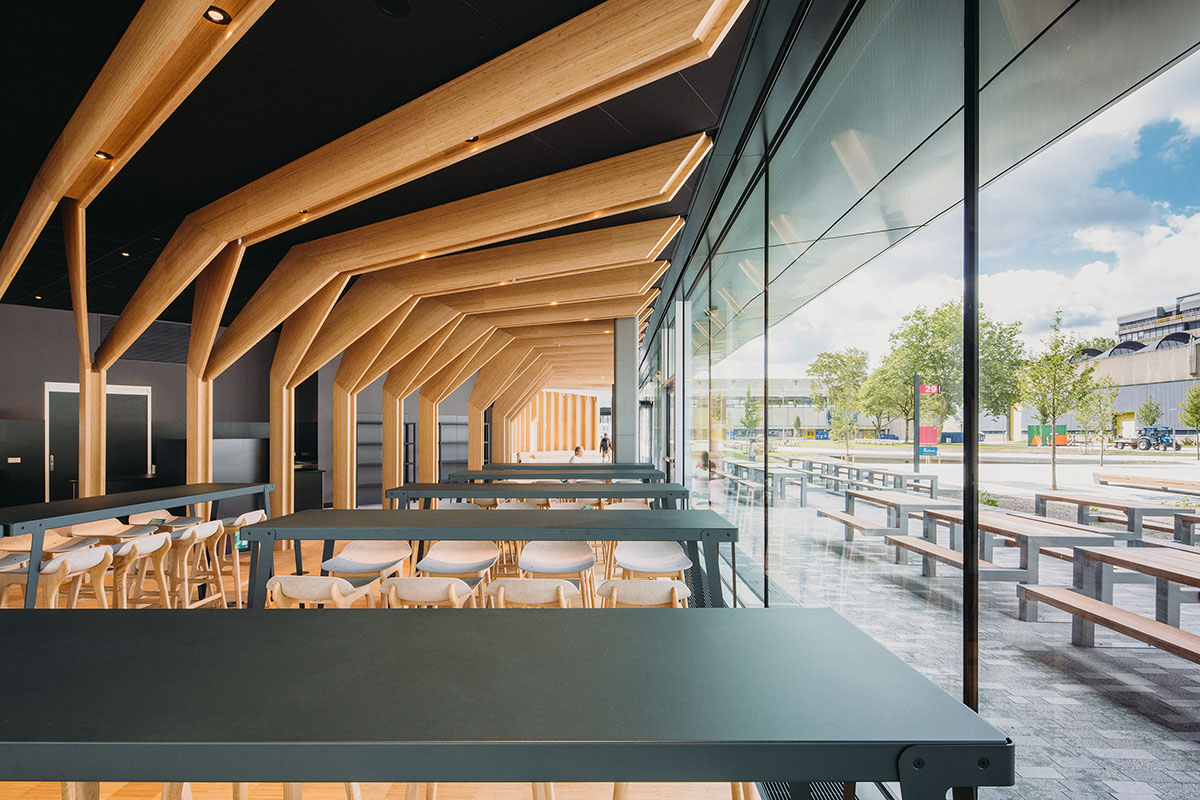 In addition, additional spaces are dedicated to lectures and tutorials, group work, project-based teaching, debates and self-study for around 1,700 students by way of the lecture rooms, classrooms and a variety of study spaces.

Echo houses a total of seven teaching rooms, most with a flexible layout. The largest lecture room on the ground floor, which can accommodate 700 people, can be divided into three separate rooms in 15 minutes. This enables multiple lectures or events to take place simultaneously and enables maximum programming of the space. 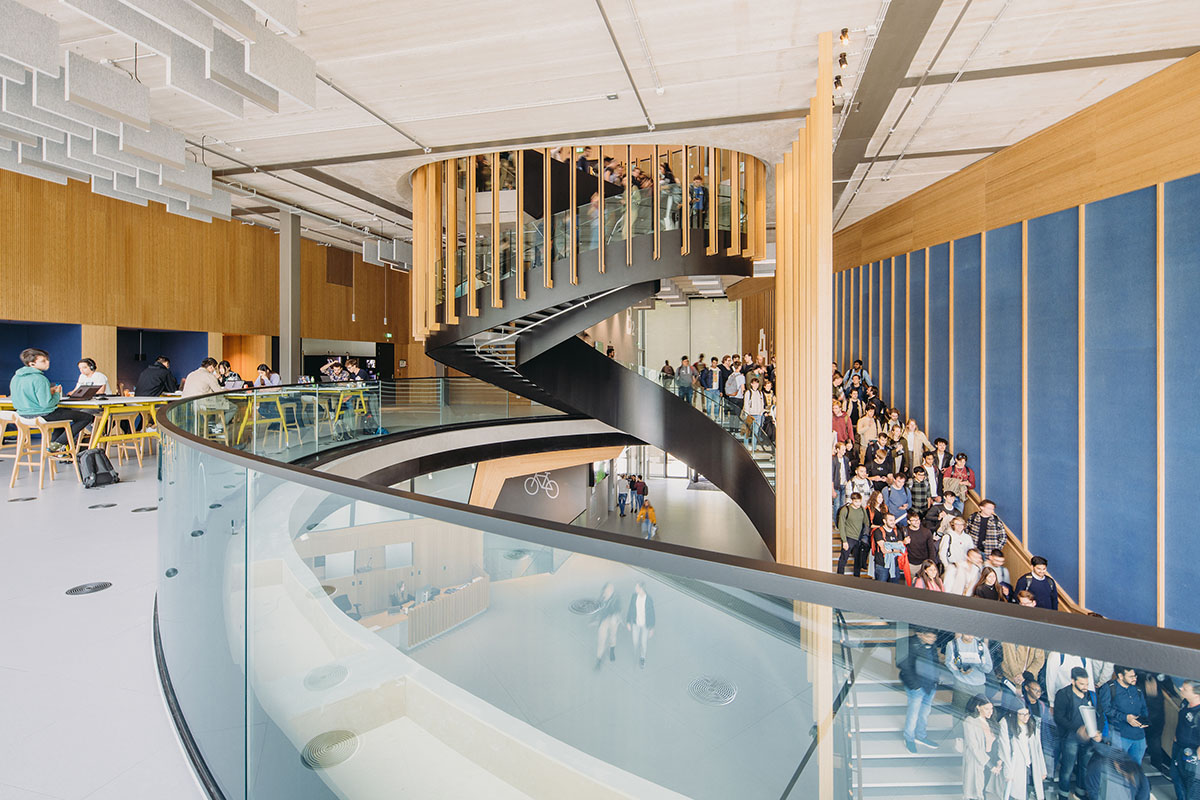 A similar movable wall system is used in the mixed didactic space on the first level, so that this can be divided into two classrooms of 144 places each when required. The more than 300 study spaces throughout the building can be used for group work and self-study.

The various teaching rooms have been designed based on the current and future needs of the lecturers and students. In Echo, the focus is on medium-sized and large teaching rooms, accommodating between 150 and 700 people. 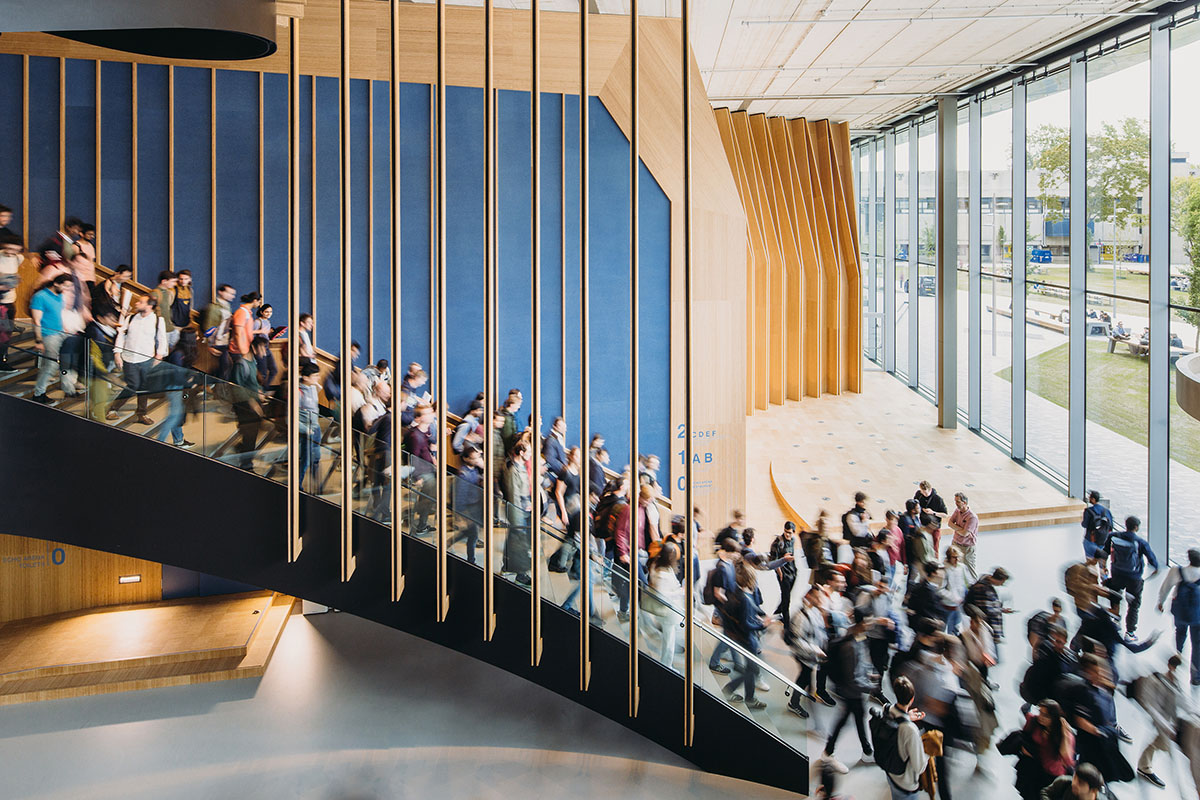 In addition to these larger rooms, there is also a case-study room that is particularly suitable for motivational teaching/interaction between lecturers and students. In addition there are four level rooms for project-based teaching, each accommodating almost 70 people.

A modular wall system has been used in the office spaces on the second floor, allowing for future changes to the layout. Should there be demand for functional change in the future, these office spaces can be turned into didactic spaces with minimum interruption. 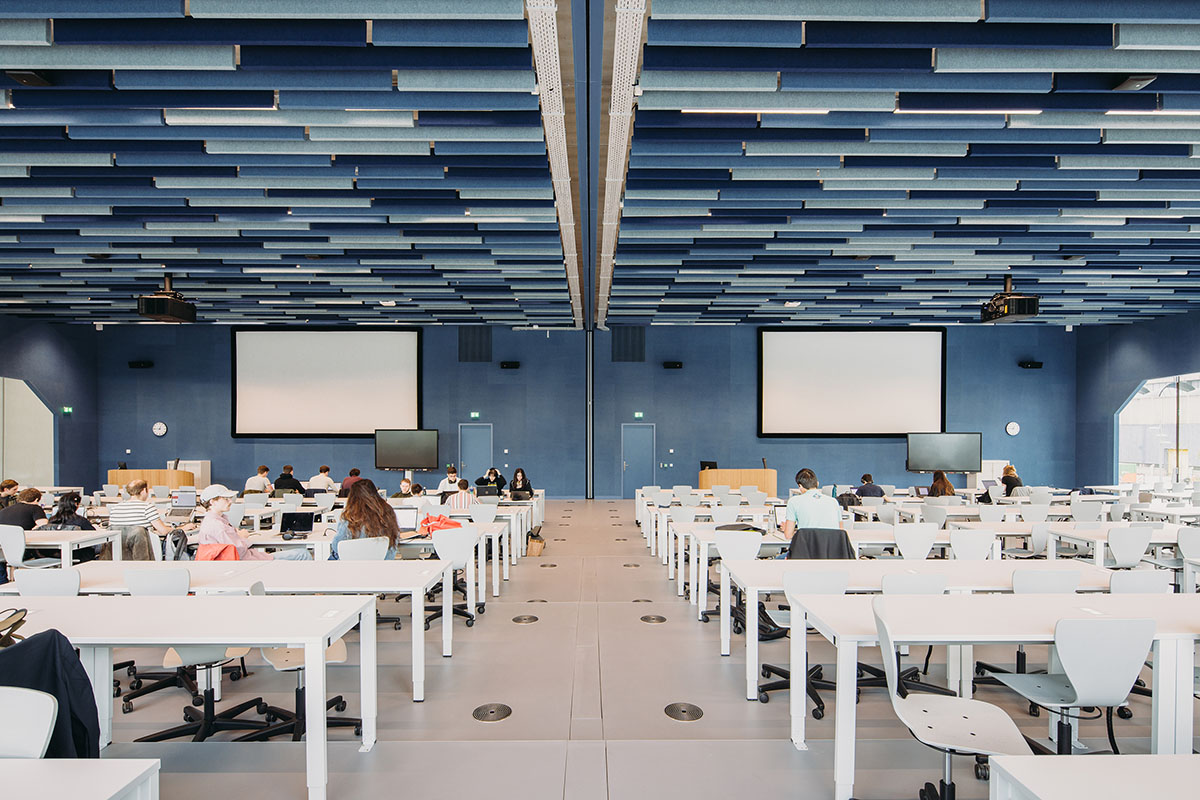 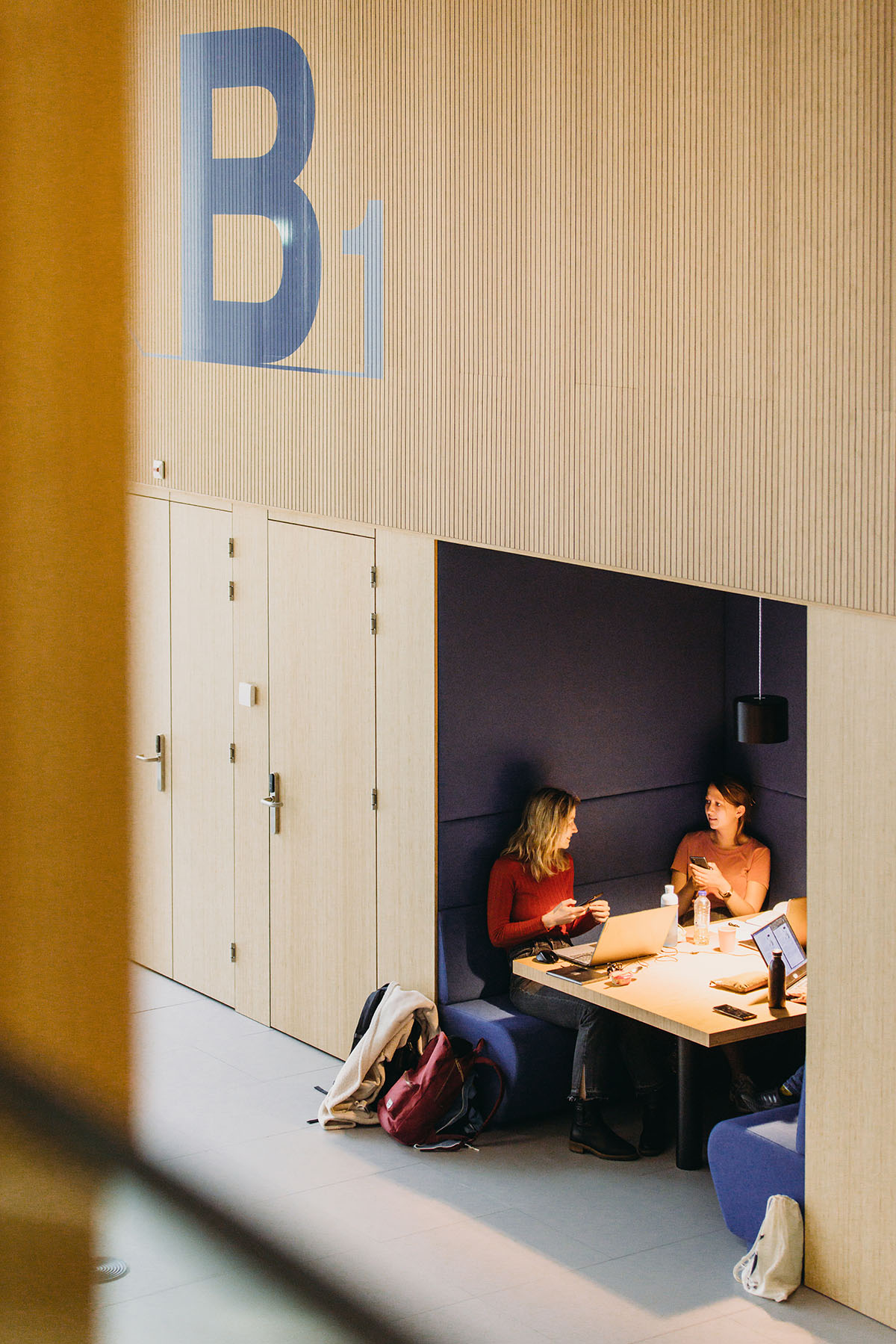 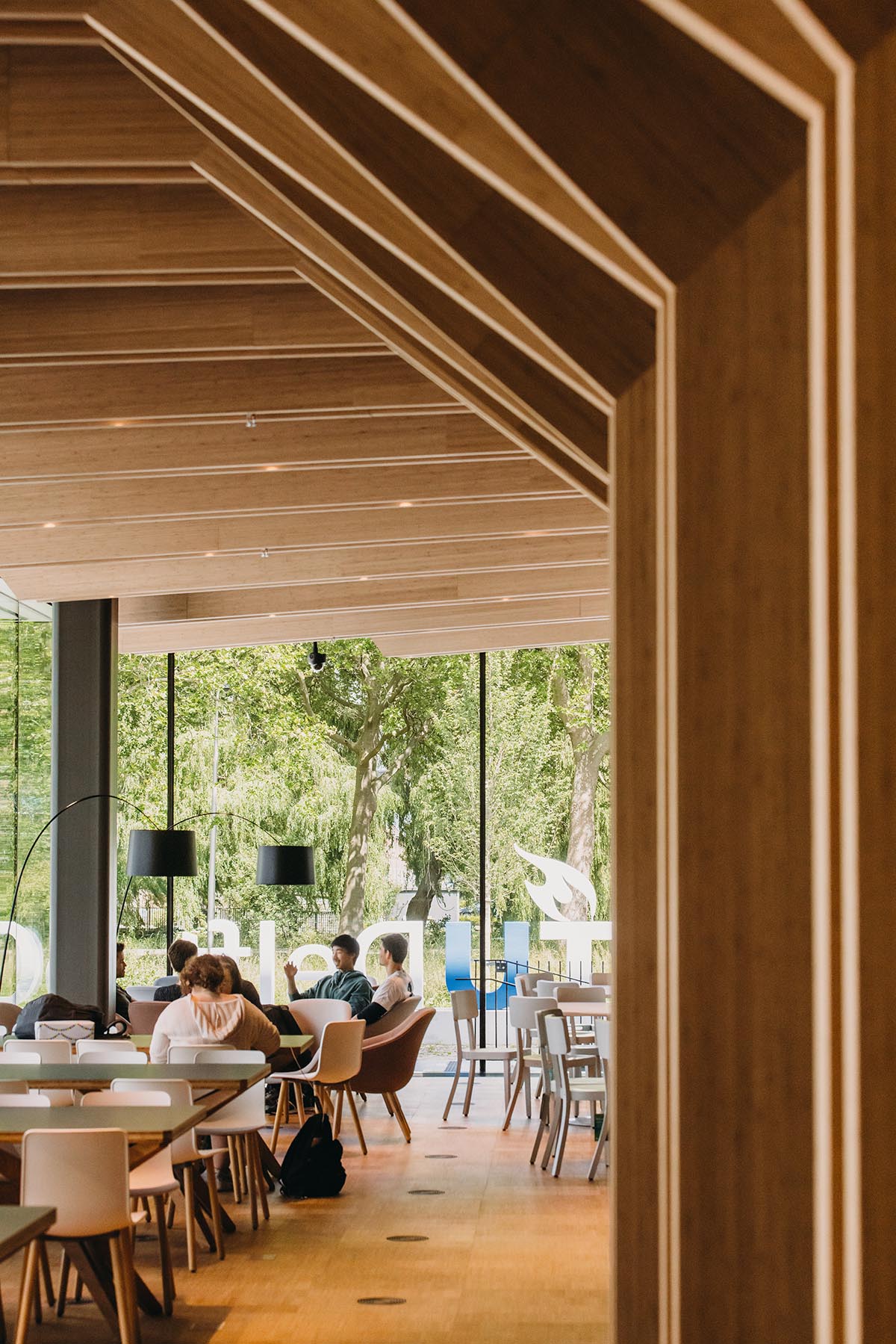 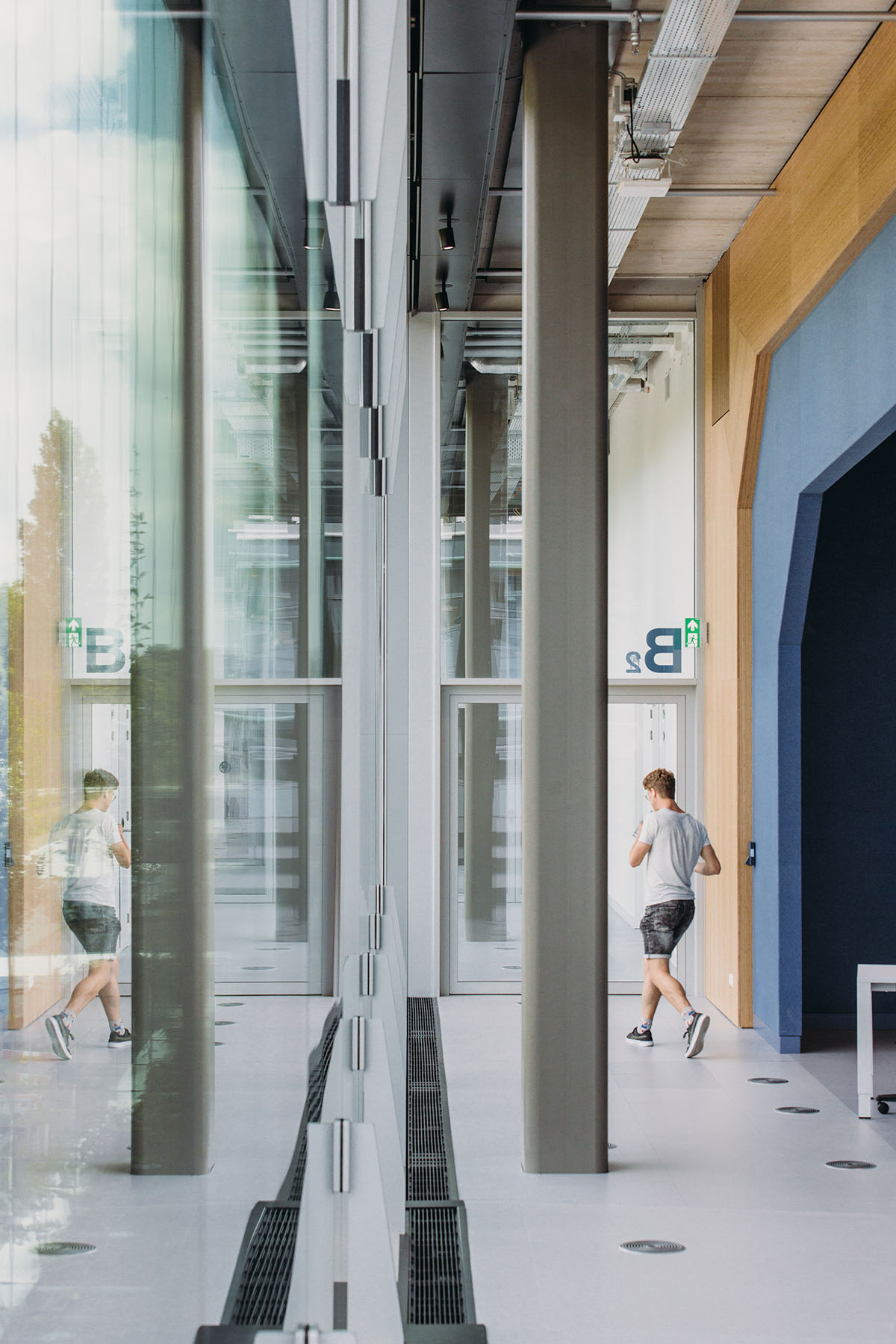 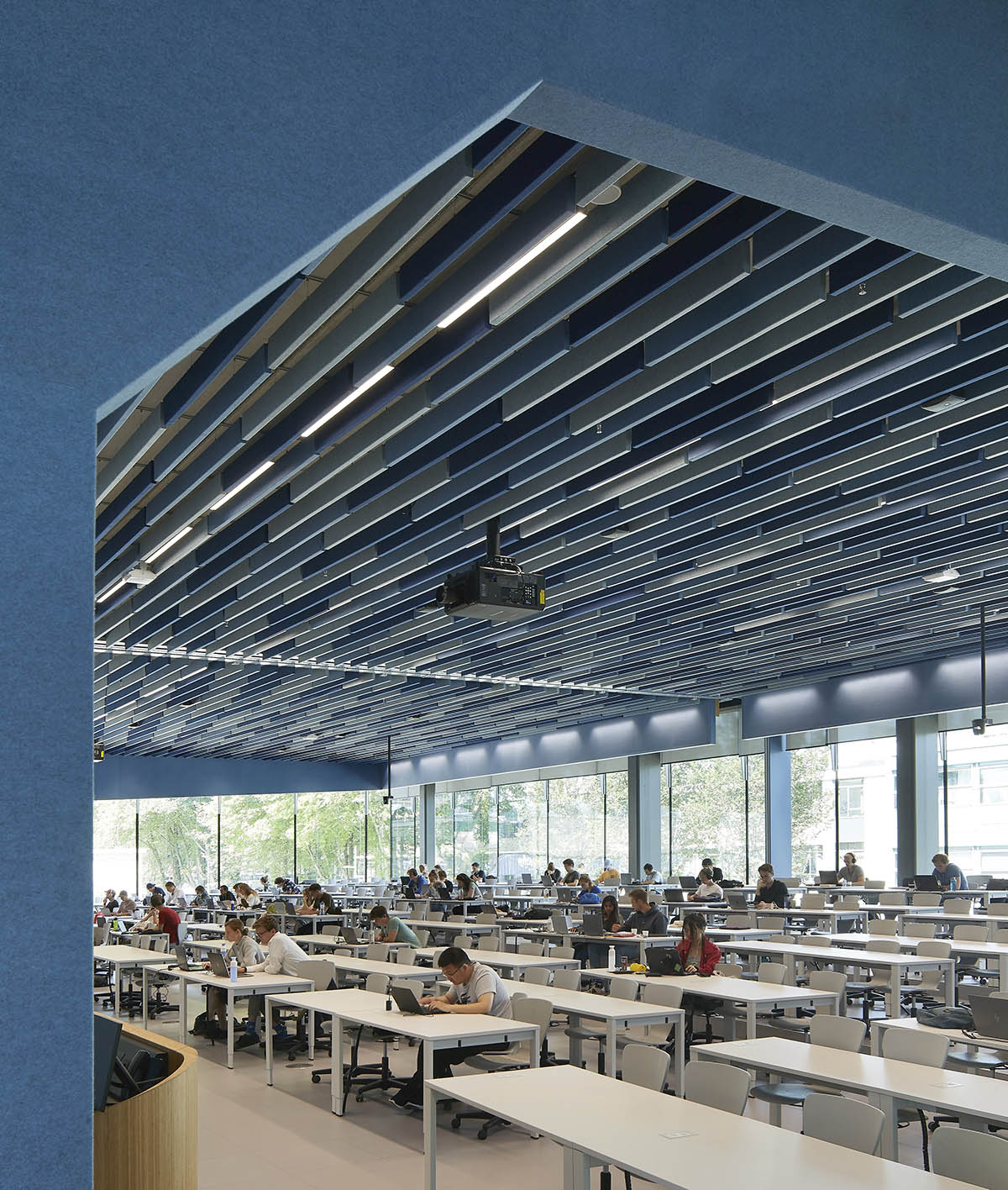 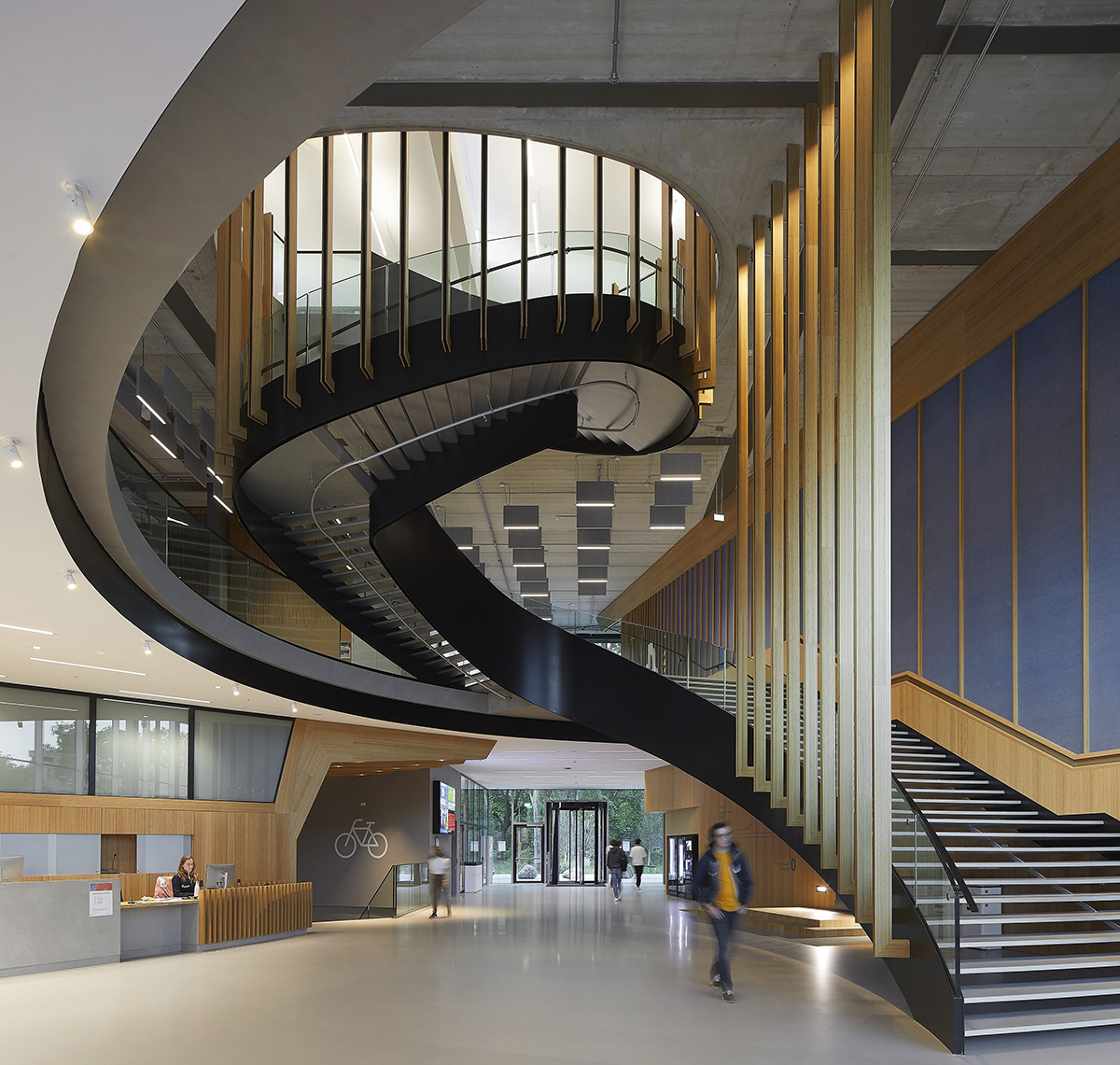 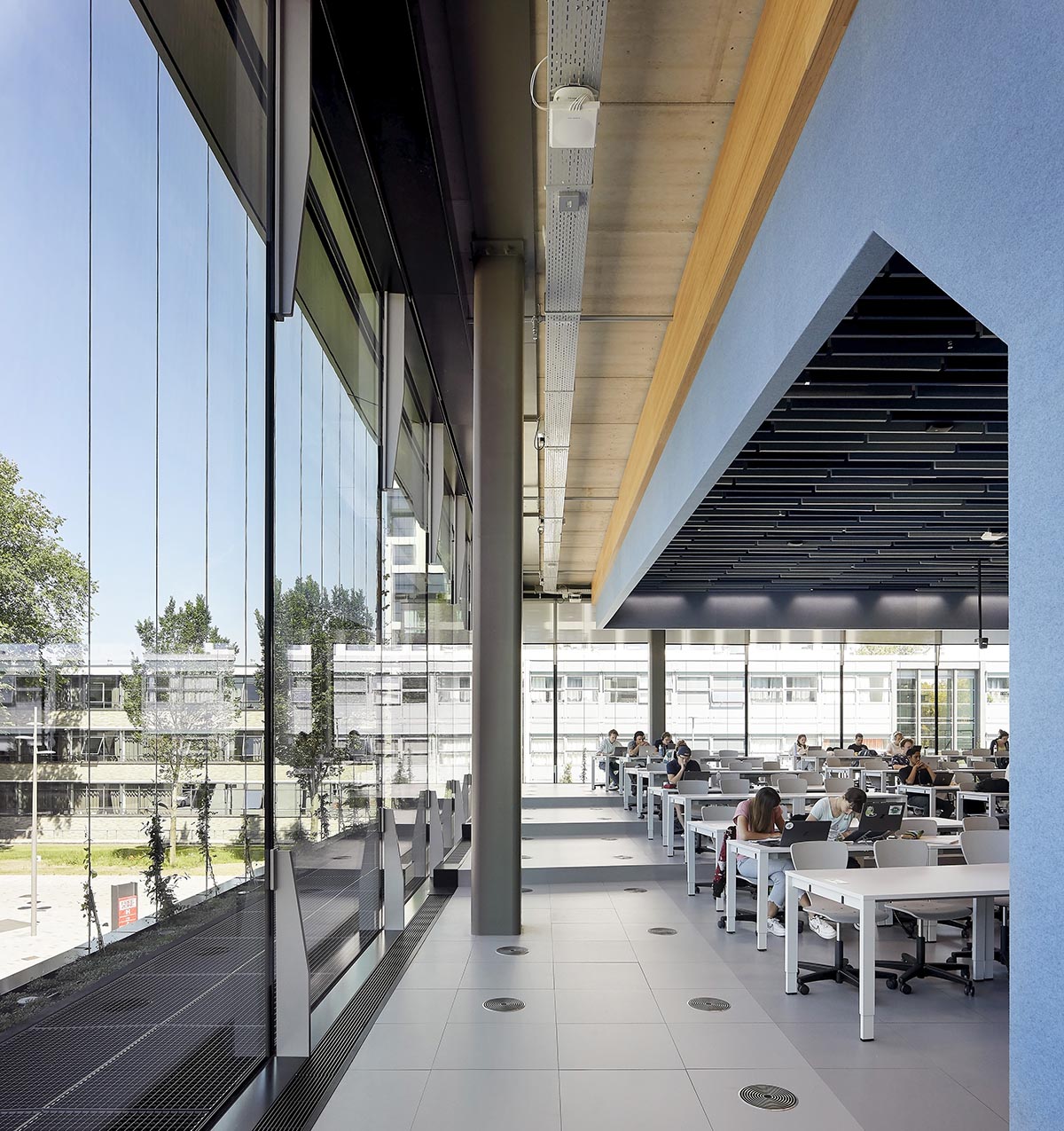 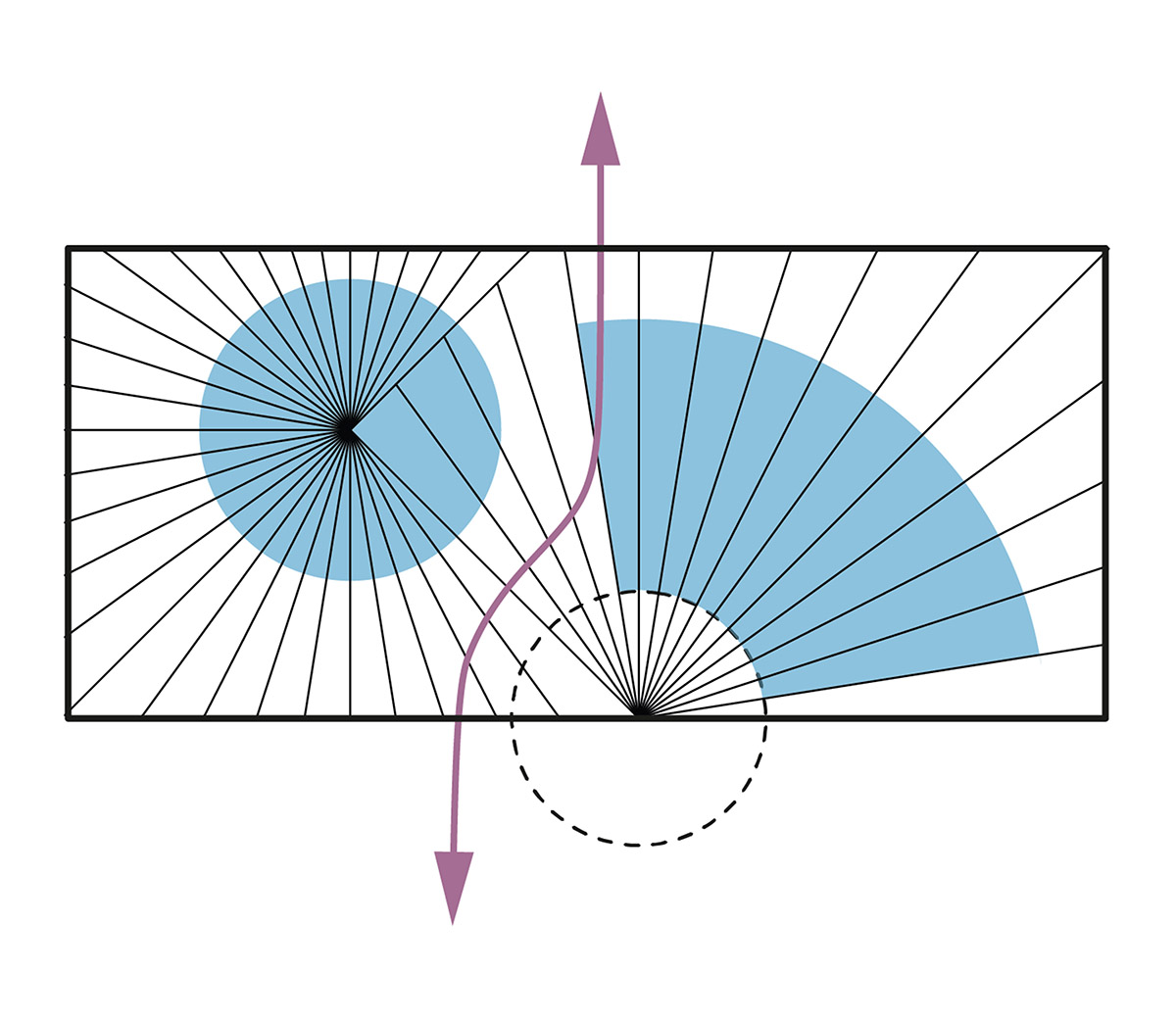 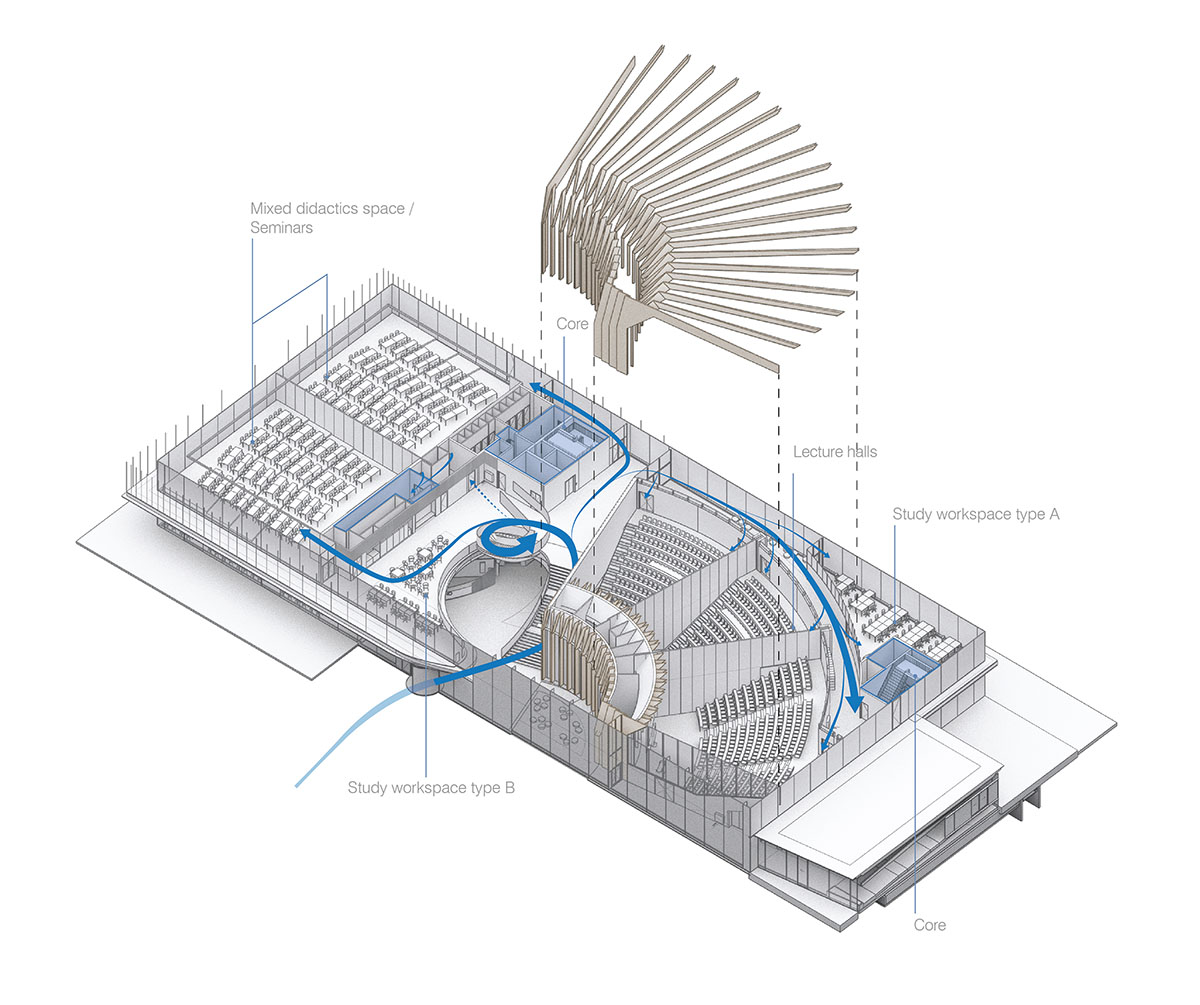 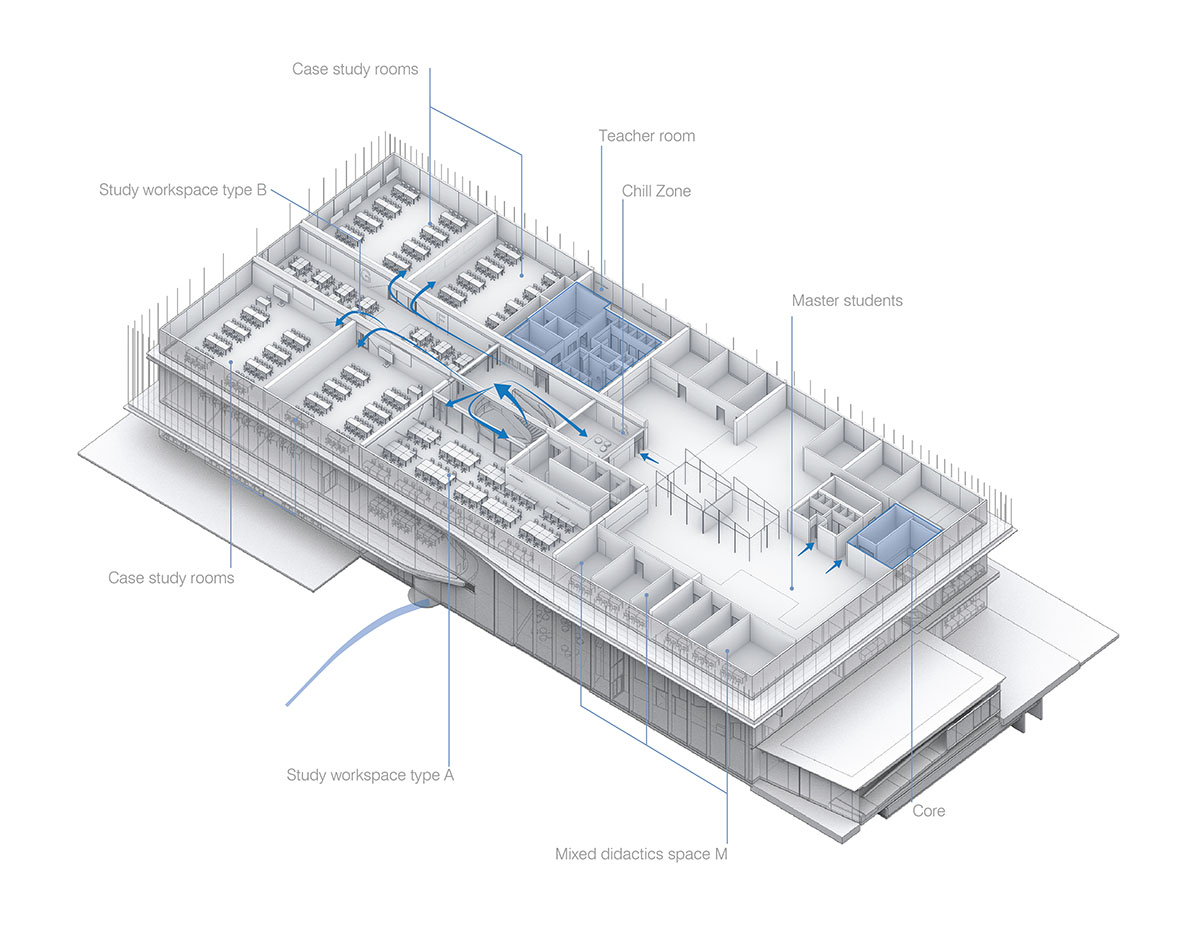 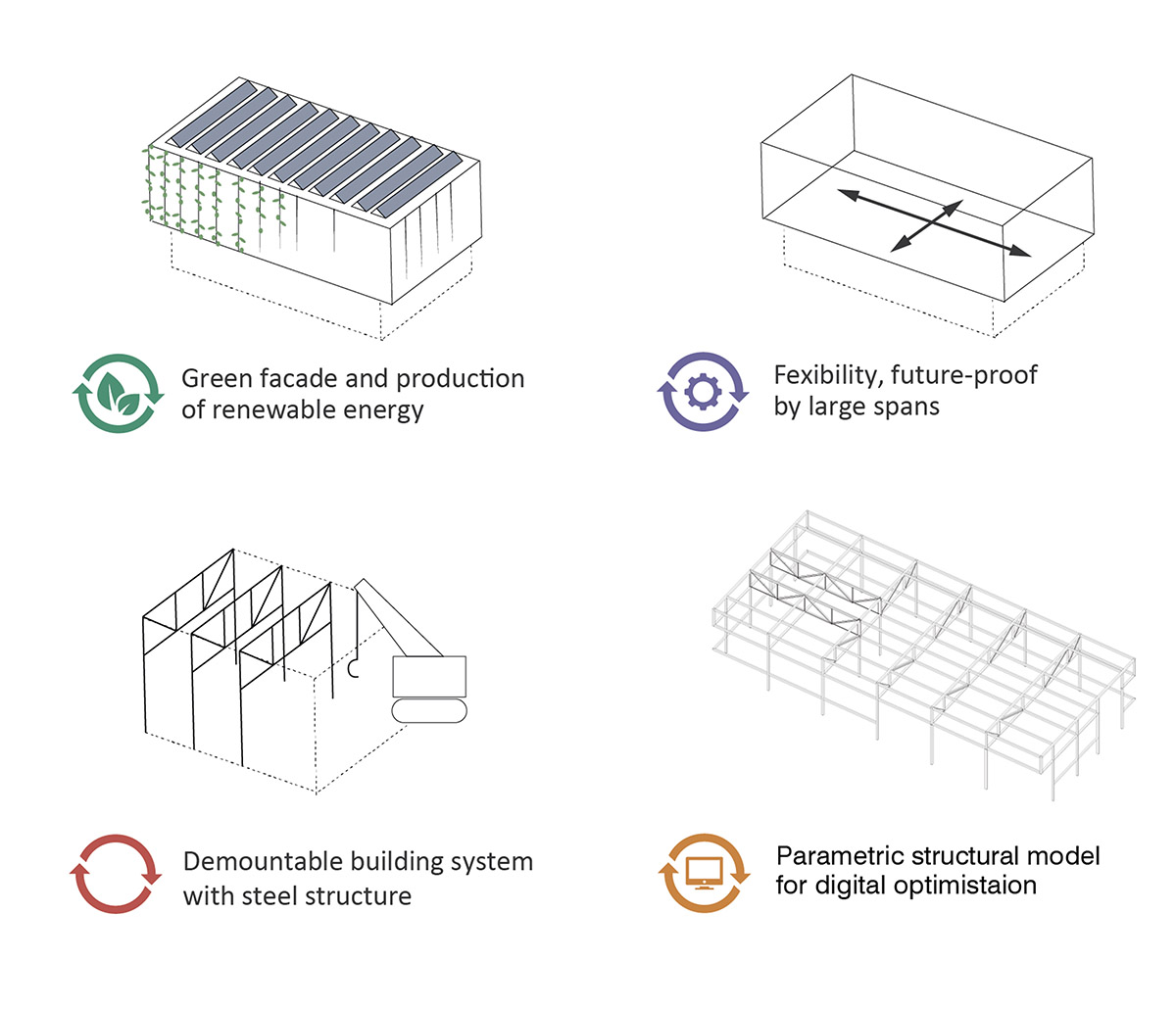 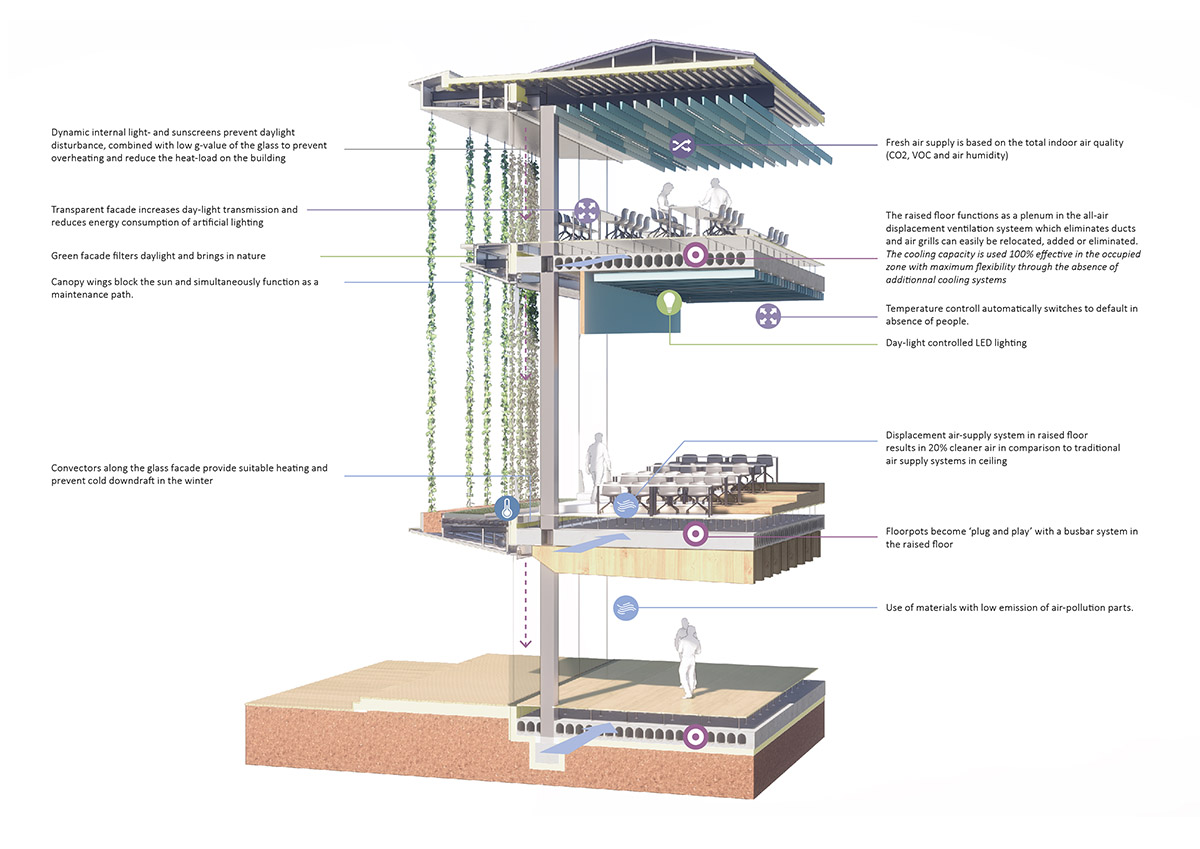