The abandoned castleville of Turkey 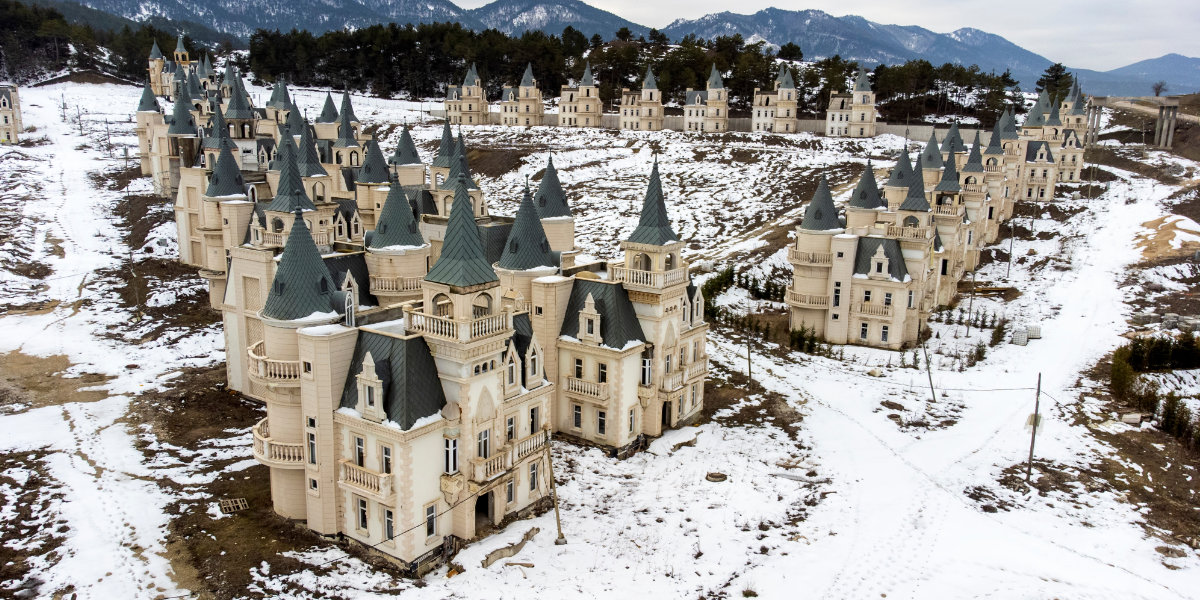 Large residentiantial projects have always been the center of urban development, be in a city or a small town. It changes the fabric of the area, sometimes improving the economy with job opportunities, and the quality of the neighborhood, and sometimes it causes a negative impact. It can lose its historical significance, damage the environment and even create an uneven socio-economic class in the area. Nonetheless, urban gentrification is an unavoidable part of architectural evolution;  and has been an ongoing excessive process in Turkey in the last couple of decades.

In the late 2000’s Turkey was seeing a boost in the real estate market, specifically from the Arab Gulf Region. At the time attaining Turkish citizenship through a real estate purchase was valued at 1 Million Dollars. By 2012 the government decided to lower the price to 250 Thousand Dollars which increased the market movement even more. Construction firms, investors, and businessmen started designing and constructing gated communities and mix-used projects intended for Arab clients and tourists. The projects always had all the facilities that would be attractive to their designated targets and they tried to use appealing names for the projects as a marketing tactic. Some chose major cities for their project location and others chose small towns, surrounded by nature and quiet.

But the world of architecture and design does not always have a smooth sailing process; battling for investors, not all projects get to come to full life. One of these examples is the ‘Burj Al Babas Thermal Park and Burj Al-Hammam Resorts'  project located in Turkey. Burj means ‘Tower’ in Arabic and Mudurnu District hosts the famous ‘Babas Thermal Baths’ from where the name of the project was taken. 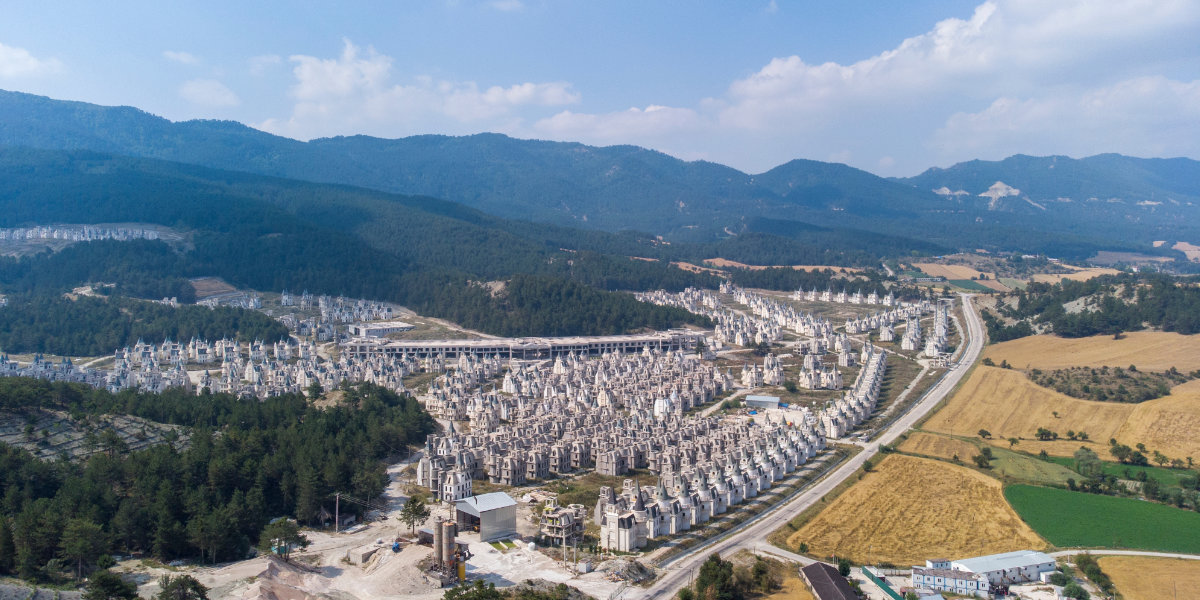 3 kilometers away from the center of Mudurnu District in the Province of Bolu with a population of 5.000, the project is spread over an area of 250 acres. The area before the construction was a pine forest and it damaged 6.5 decares of forestland and uprooted 82 black pine and oak trees during the construction. The locals of Mudurnu have filed a lawsuit for “occupancy of forestland, forest utilization, and settlement in forest and wood-chopping of usable forest assets.” The indictment said excavated soil was dumped in the forest, as a result of which 46 trees were tumbled down.

Another reason for the local’s disapprovement of the project was in its design which was not disrupting the language of the District creating dysfunction in the fabric of the town which has been part of the UNESCO World Heritage Tentative since 2015. 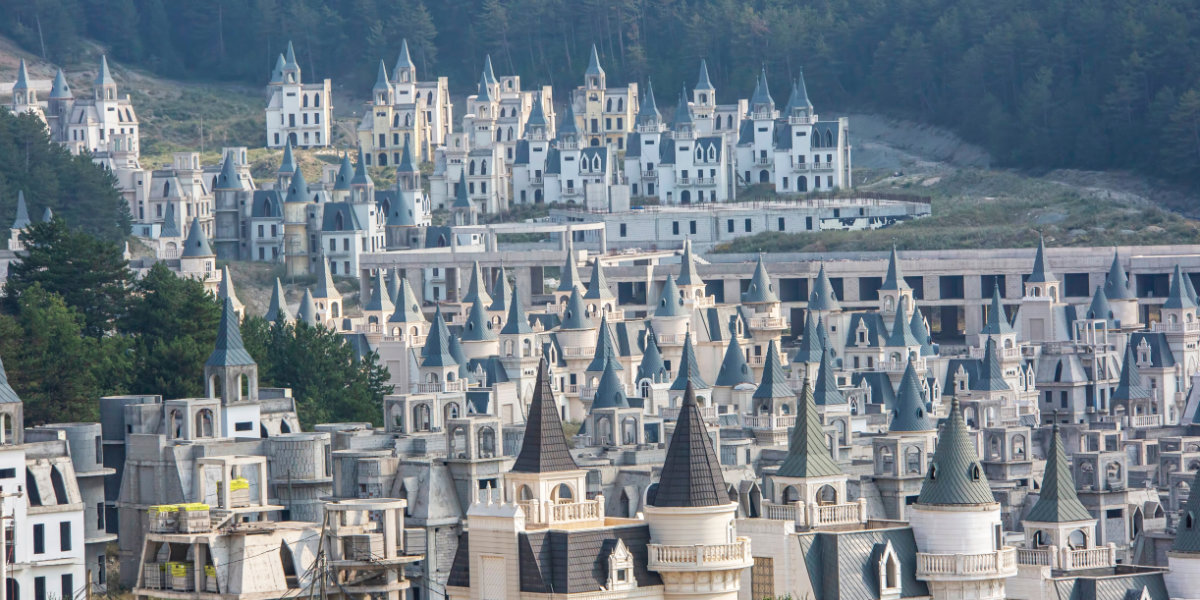 The construction started in 2011, and in November 2018, the project completed more than 50% of the construction hosting the residential units when it fell into bankruptcy leaving the site as a ghost town. The Resort section which is hosting a resort, a mall, and a mosque did not begin construction.

The project consists of 732 identical 3-storied castle-like villas which are tightly clustered. On a land of 324 square meters, the footprint of the building is 160 square meters, having three floors and a basement. 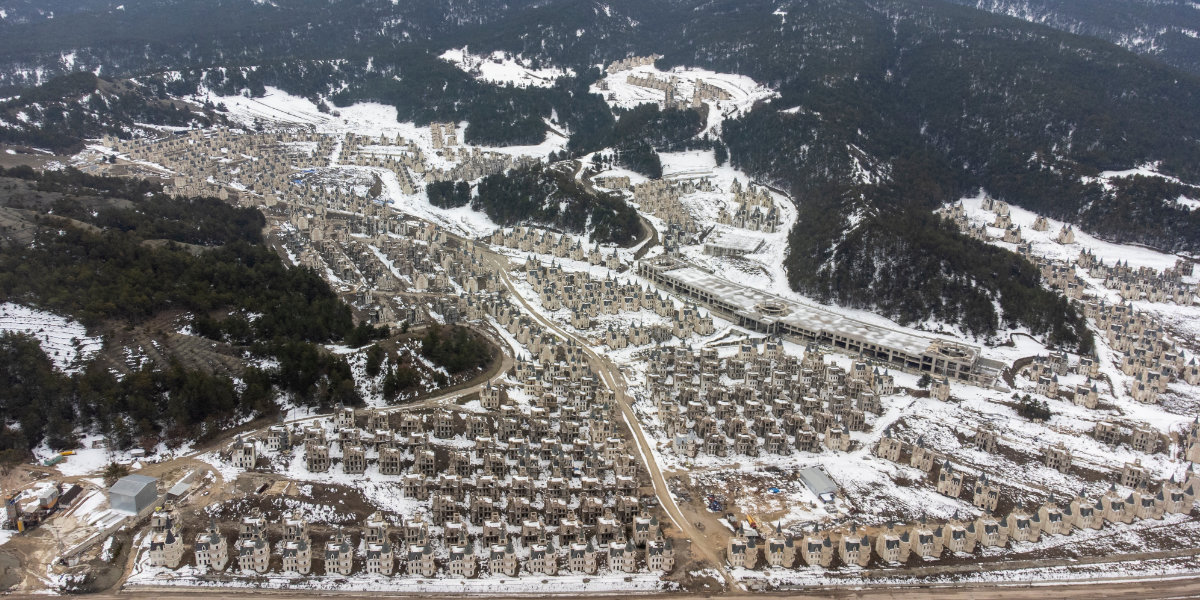 On the website of the project, it is mentioned that the project's inspiration comes from the Château de Chenonceau in France's Loire Valley style meanwhile during an interview, the founding partner of Sarot Group mentioned that the inspiration for the villas was taken from the Galata Tower and Maiden’s Tower. Even though the reference point has been taken from real historical buildings located in Istanbul, the villas are known today as Disney Castles. 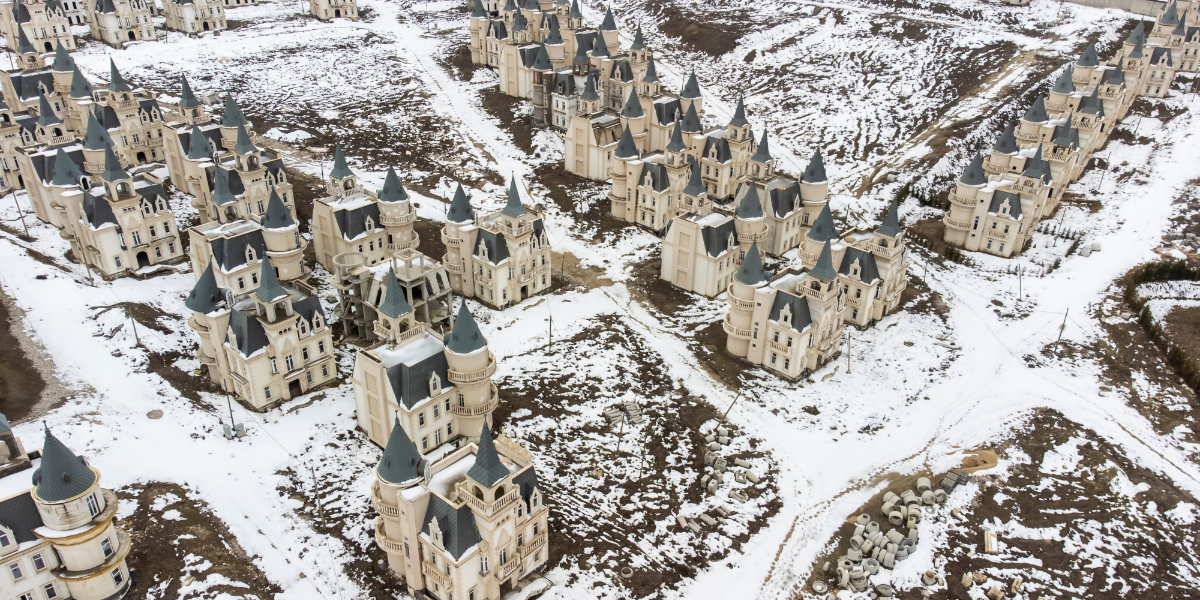 Today the site has become a popular social media attraction and a sensation as well as a destination for those who enjoy traveling to bizarre places. It can be found on many Youtube channels local and international alike.

For instance, Uras Benlioğlu, a Turkish Youtuber with over 3 Million subscribers has visited the site and made some detailed observations.

Even famous musicians and singers; "Meduza, Becky Hill, and Goodboys" have shot a video clip for their song "Lose Control" on this site.

Another conceptual artist, Alexandre Humbert, made a proposal through a short movie, offering to let this abandoned place turn into a theme park where tourists get to walk around the site and experience a ghost town. Interestingly the artist used the famous Disney font in his work in the headline name of the Project- Sleeping Beauties.

What will this project be in the future? Will the construction resume or will the town turn into a graveyard in the hopes of becoming a residential attraction? Many projects alike have been abandoned due to ill management and some even fraud but none resemble the Castille Ville Town...