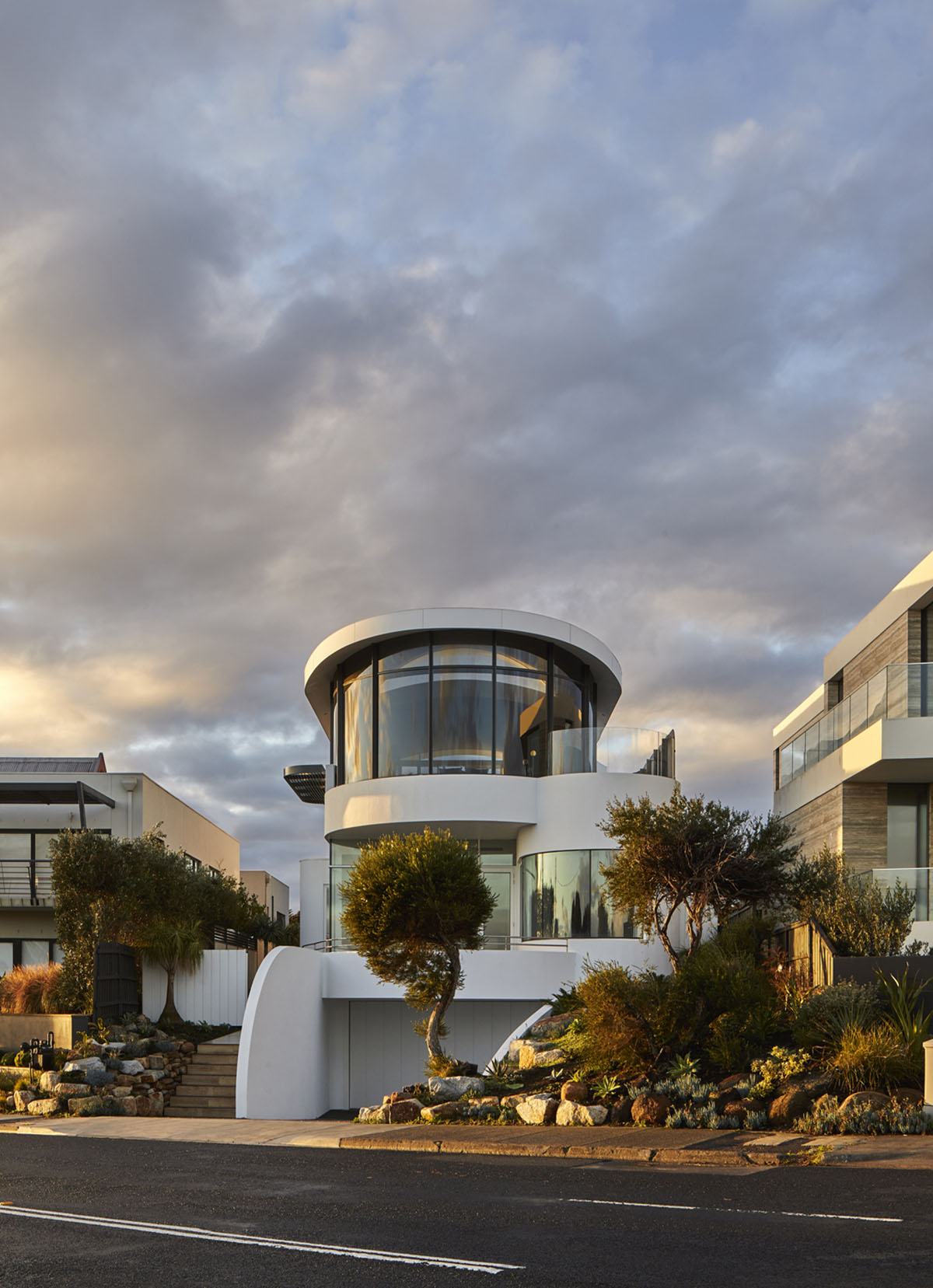 Black Rock House is designed by SAAJ Design based in Melbourne. The name ‘SAAJ’ is based on the first and middle names of the brother-sister partnership Sally Ann, and Andrew James. Brother and sister with different knowledge and background possess quite a broad-minded approach to their projects.

"Andrew is a registered Architect whilst Sally is an Industrial Designer, which allows for cross-fertilisation of disciplines and unique skills. The skillset at SAAJ Design’s studio provides their clients with architectural services and a package complete with interior design and potential selection of furniture, soft furnishings and general interior decoration - a complete lifestyle is considered," reported by SAAJ Design. 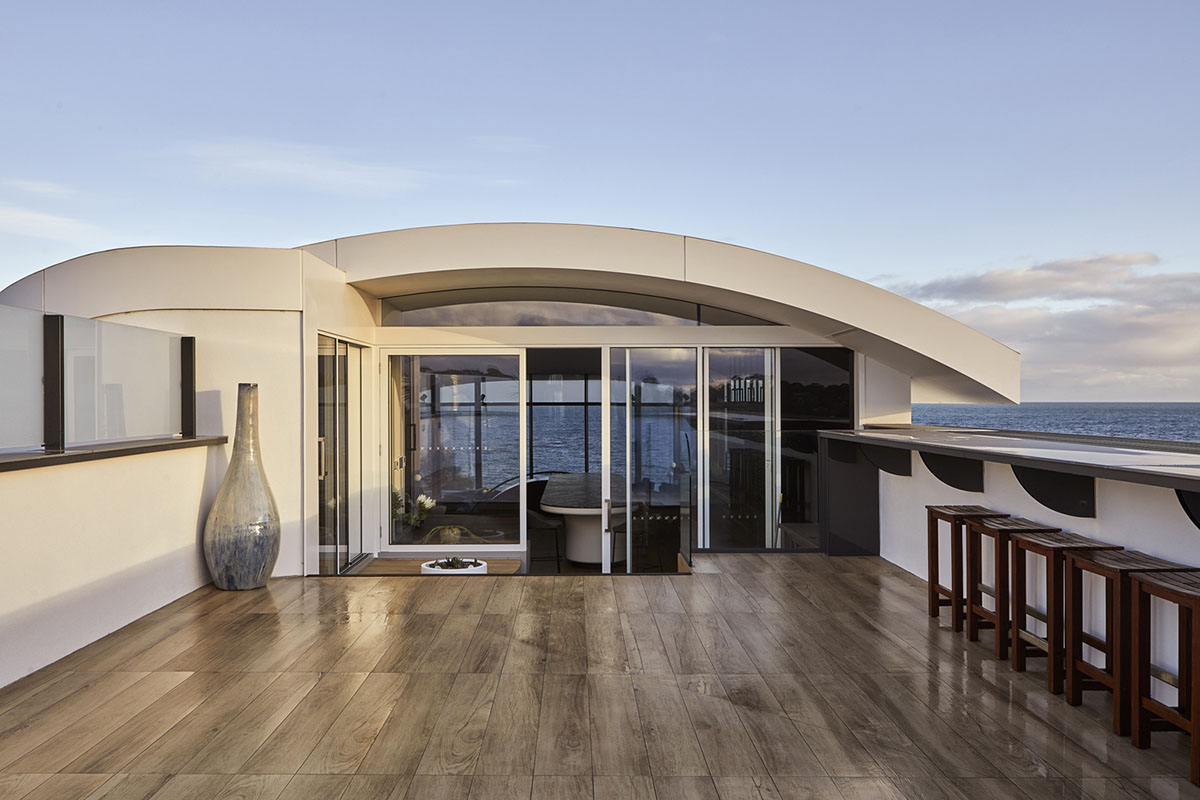 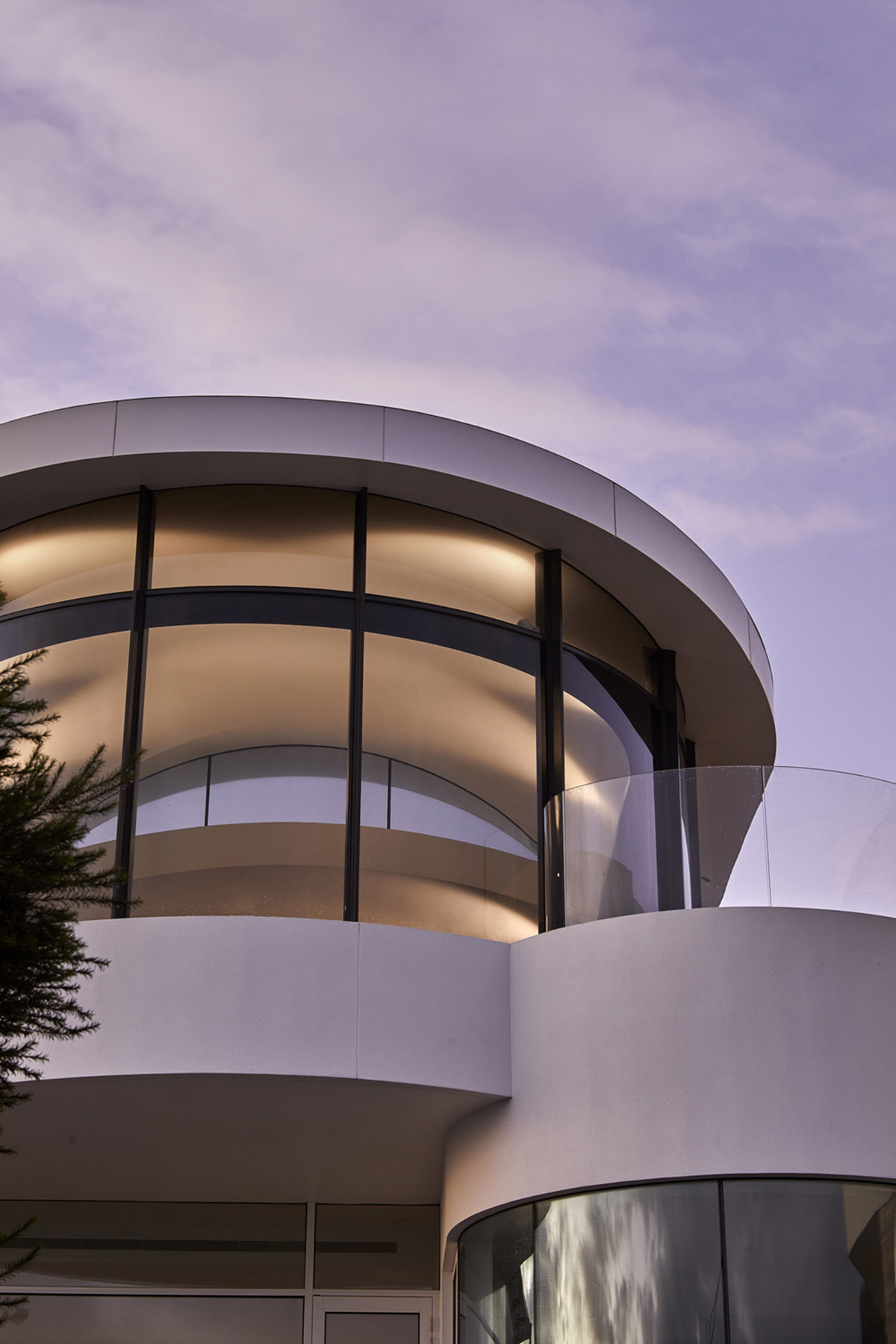 The Black Rock House’s site sits on one of the highest topographical locations of Black-Rock, Beach Road, on a North-South axis. The solar orientation of the site provides views opposite to bay views. These features provide opportunities for the building to be singular, and centrally positioned, with a large proportion of glass facing the bay regardless of the orientation.

Andrew and Sally believe that "these features are generally architectural, visually interesting, sculptural in form and highly visible on this edge of the coast."

"This house explores commentary on this street character, undulating landscape and the fluidity of the bay." 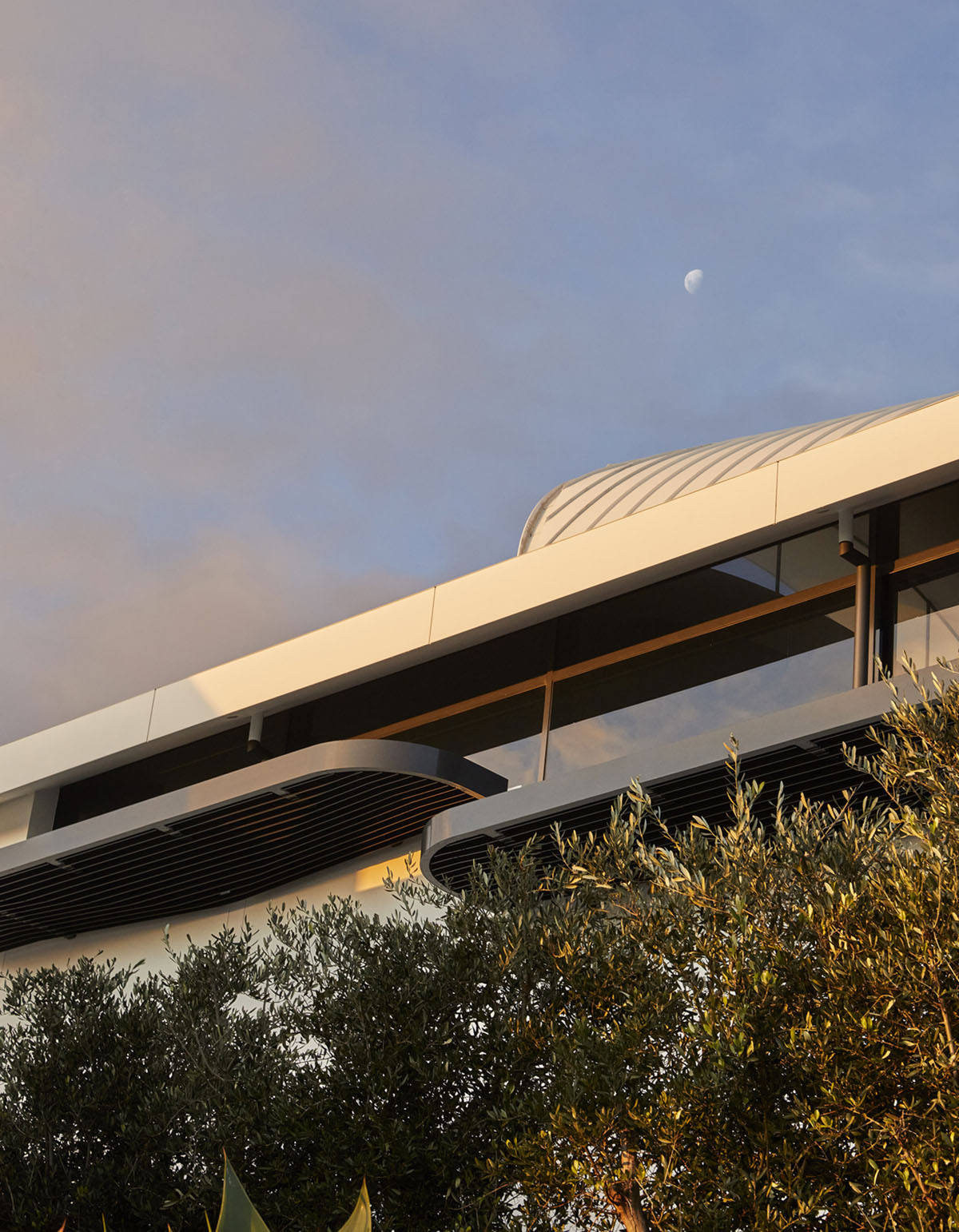 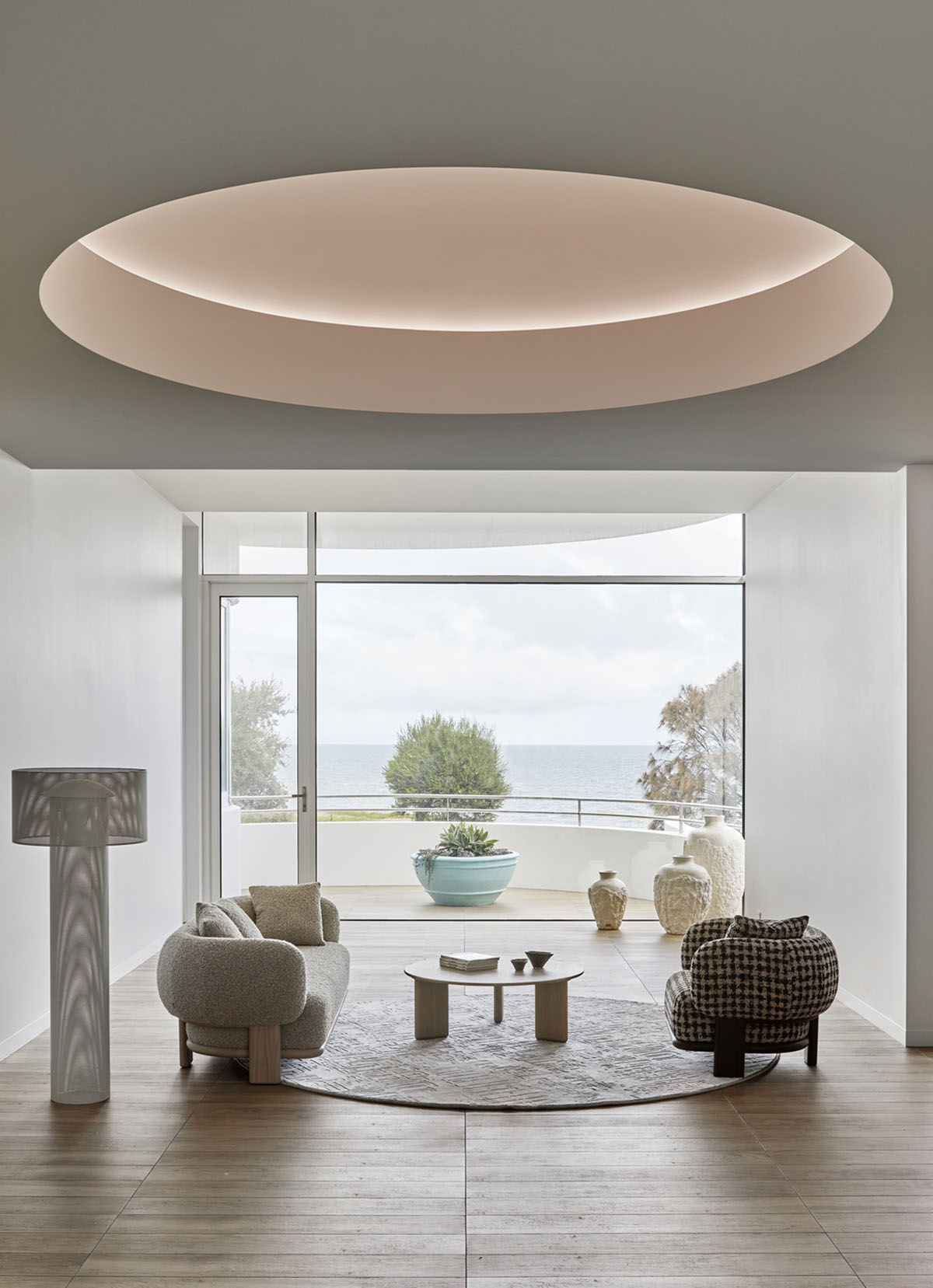 The requirement of the clients was to feel like they were living on the water, like looking out to the horizon from a ship’s deck. 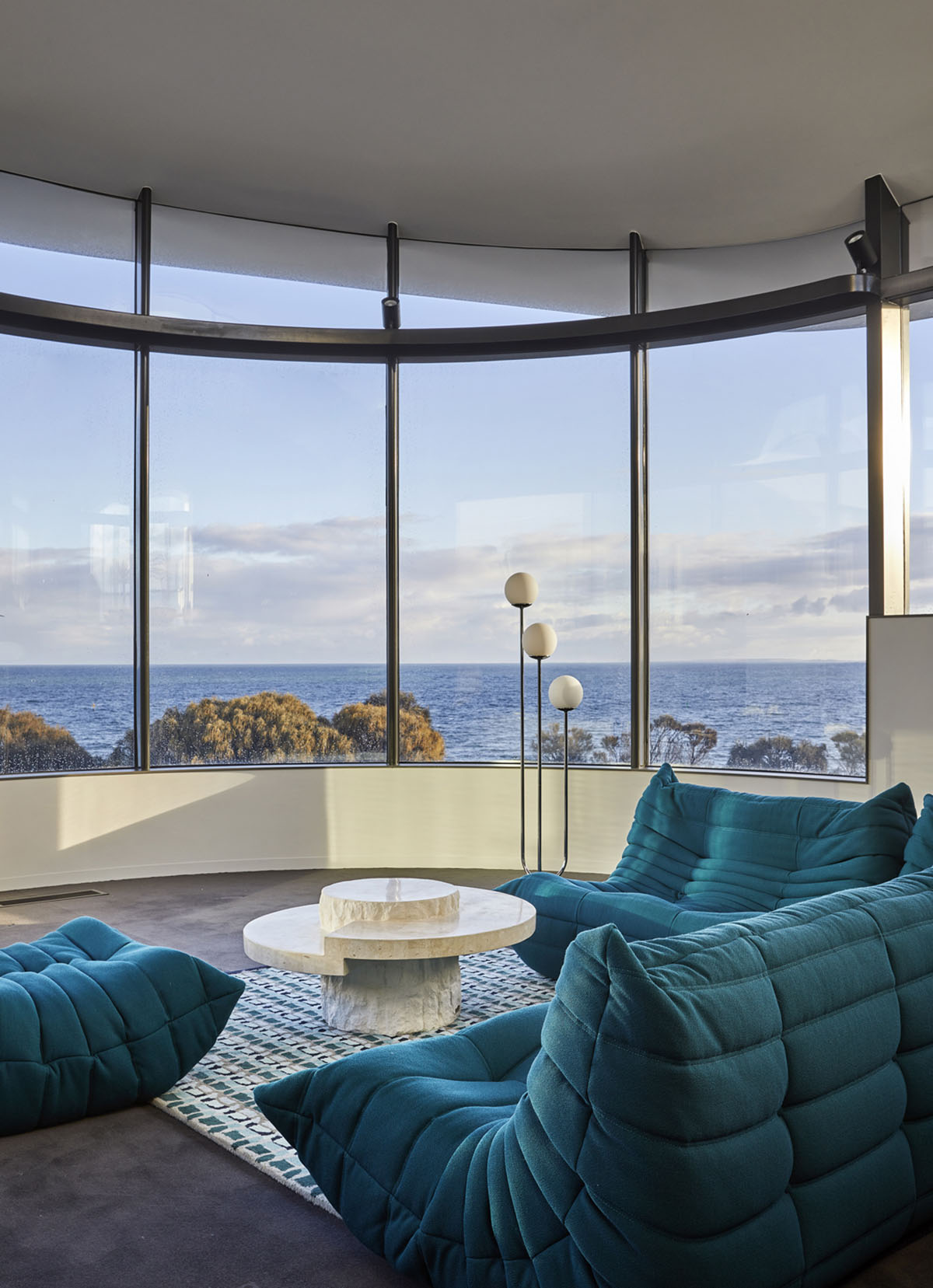 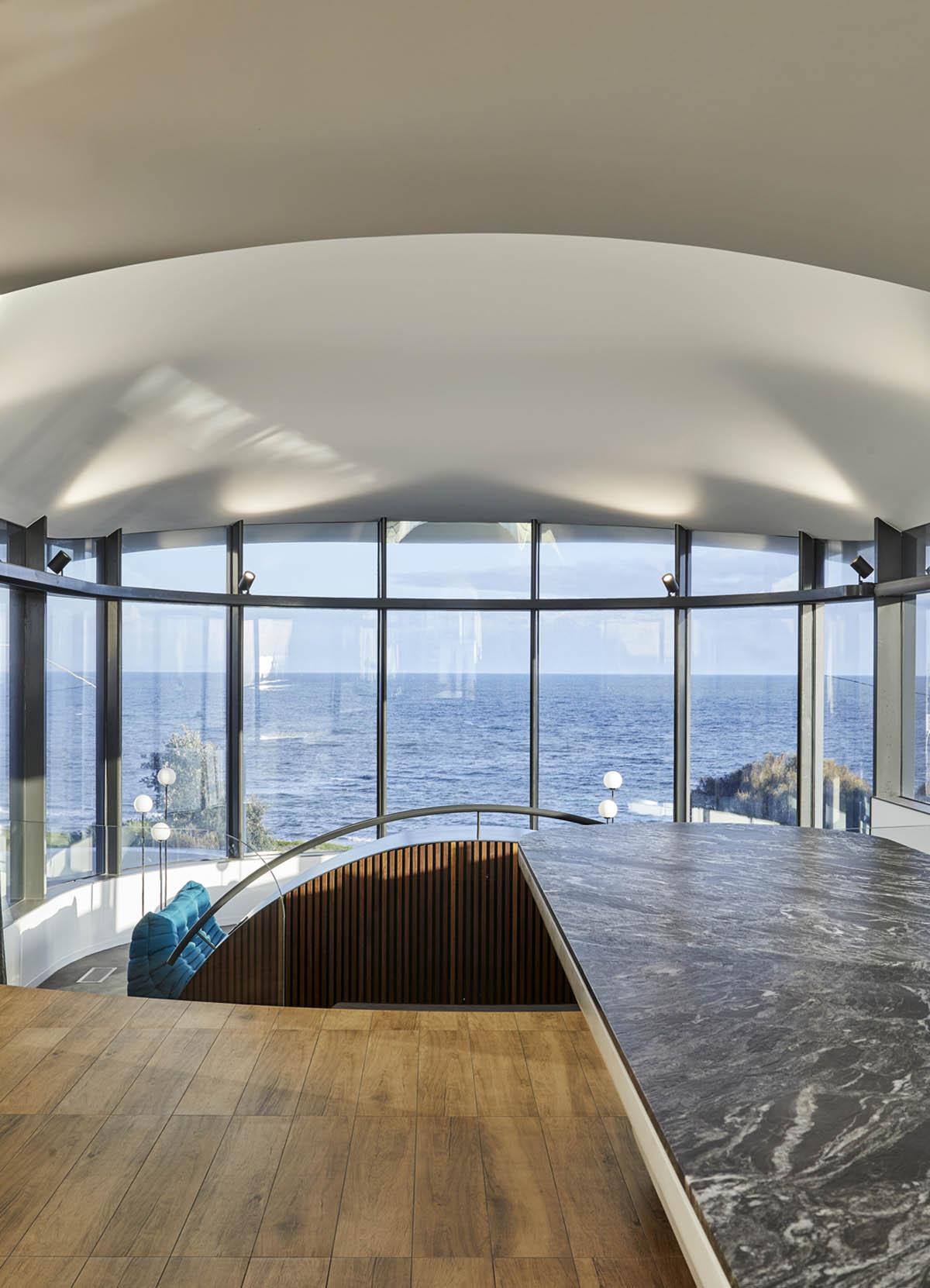 "Meticulous design analysis was given to achieving multi-tiered views through the different levels of the house, making one feel like they are hovering over the water’s edge. A biophilic response to the experience of space and place," said Andrew and Sally. 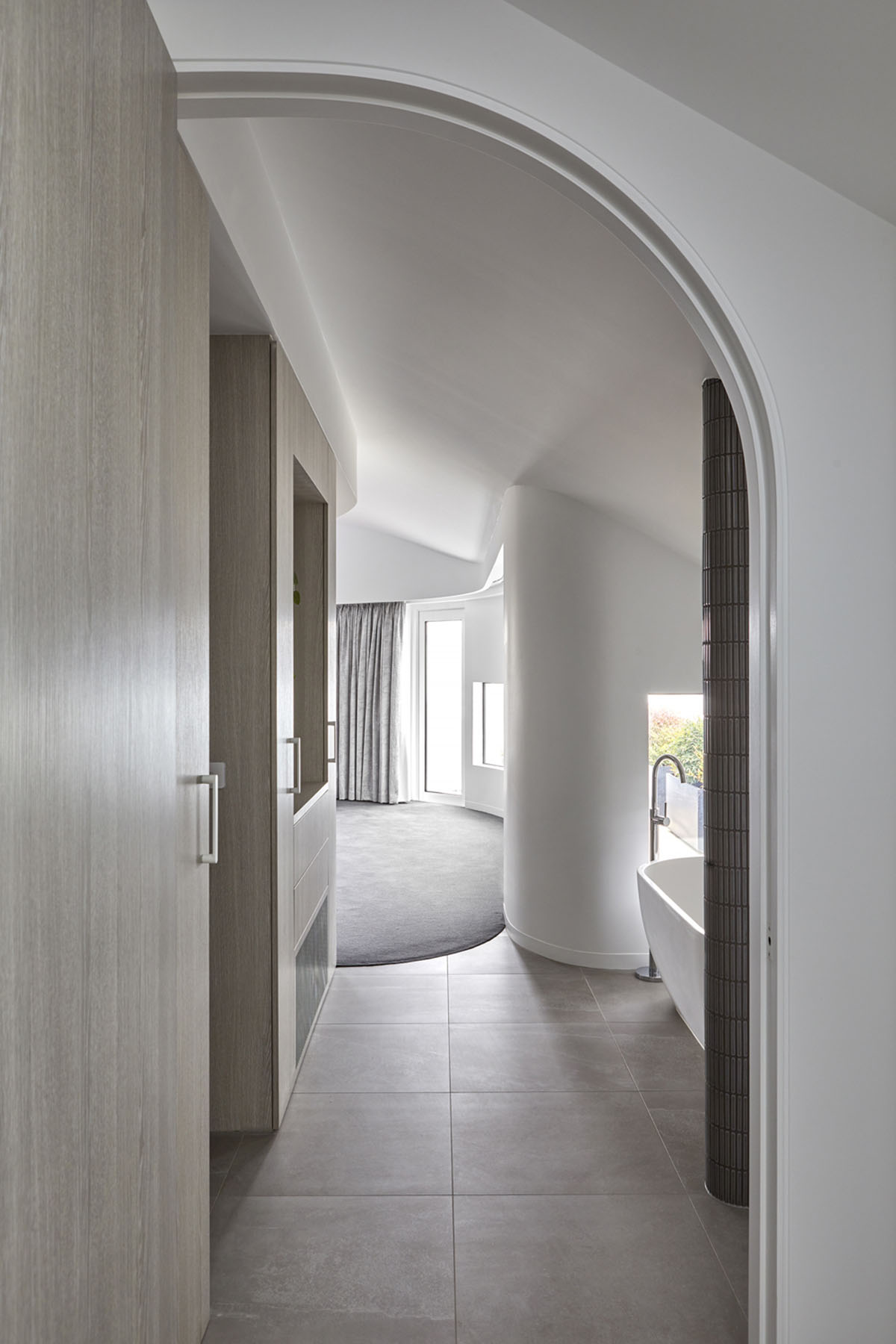 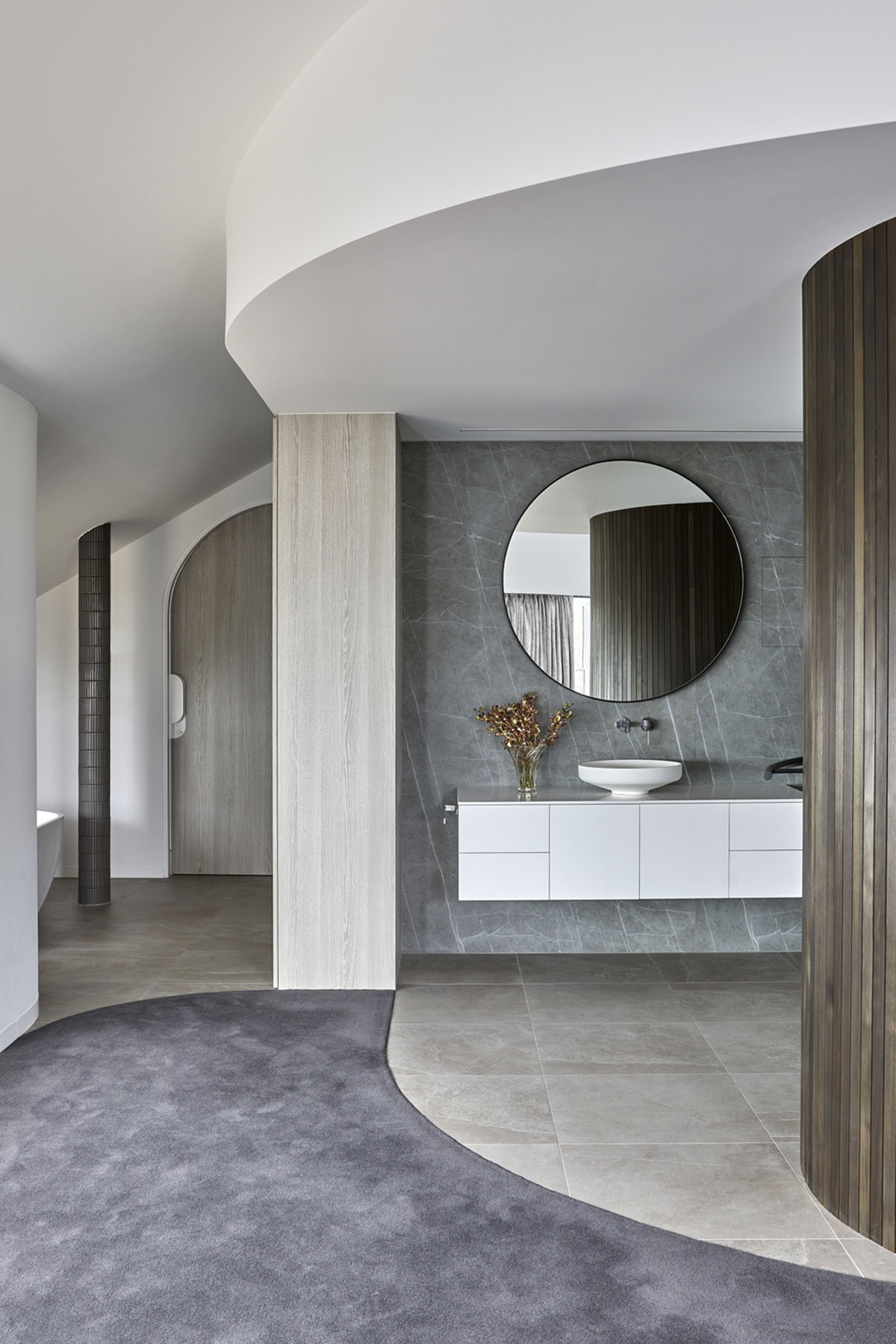 Andrew and Sally explained more below (the text is published with their own words and permission). The building form is essentially an island surrounded by open 'green' space. It reads as a singular architectural form directed towards the expansive views in front of it. The 'nose' of the building is sculpted, curved and soft in appearance. The roof form is highly articulated, appearing to float and reflect the topography. The highest part of the roof is in the medium width, raking from the front to the back, opening to the North, and incorporating a highlight window. This sustainable passive-design device funnelled northern light into the south-facing living. Coupled with high-performance glazing, thermal mass insulation and seasonal shade control, the client’s connectivity to the natural environment increased. 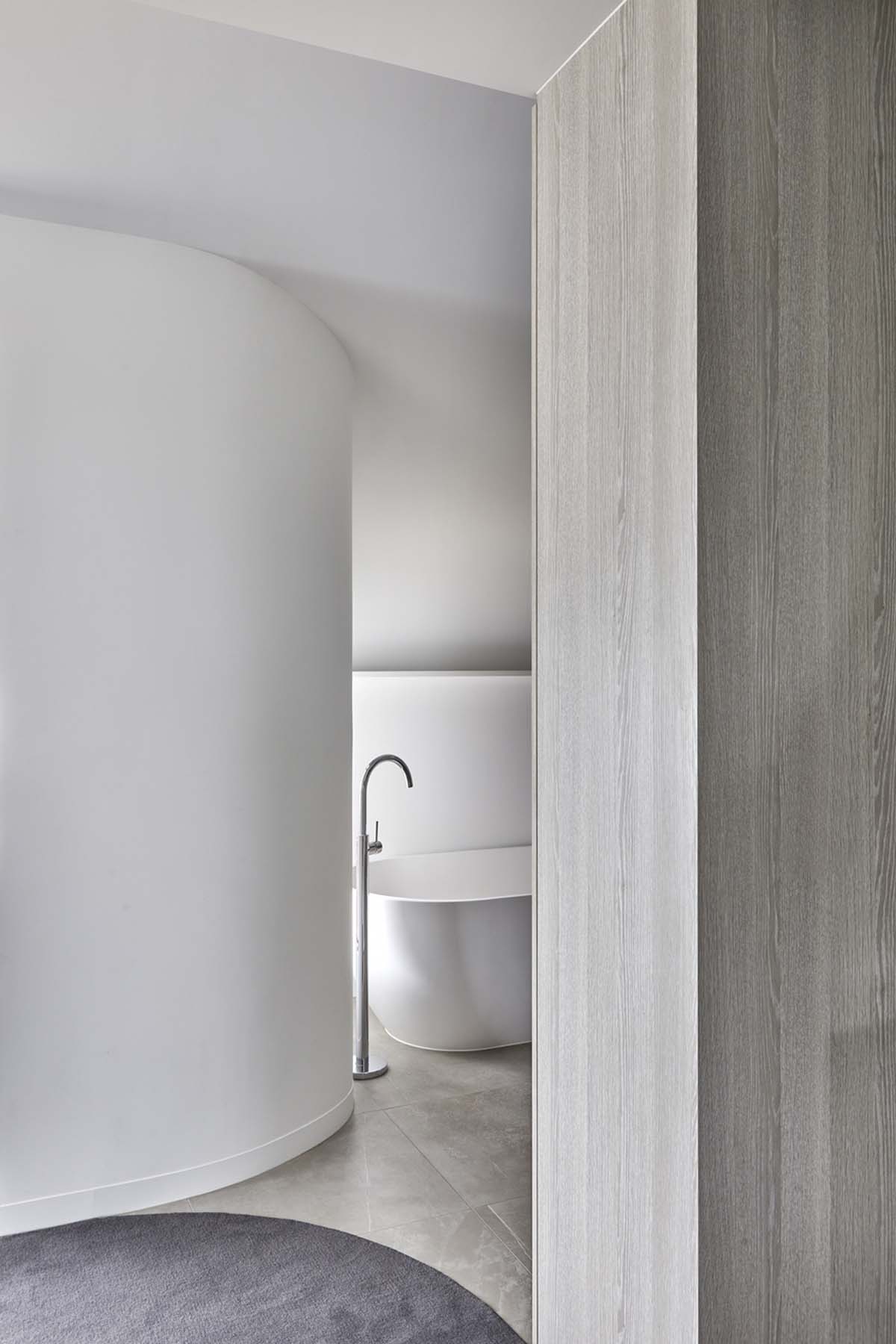 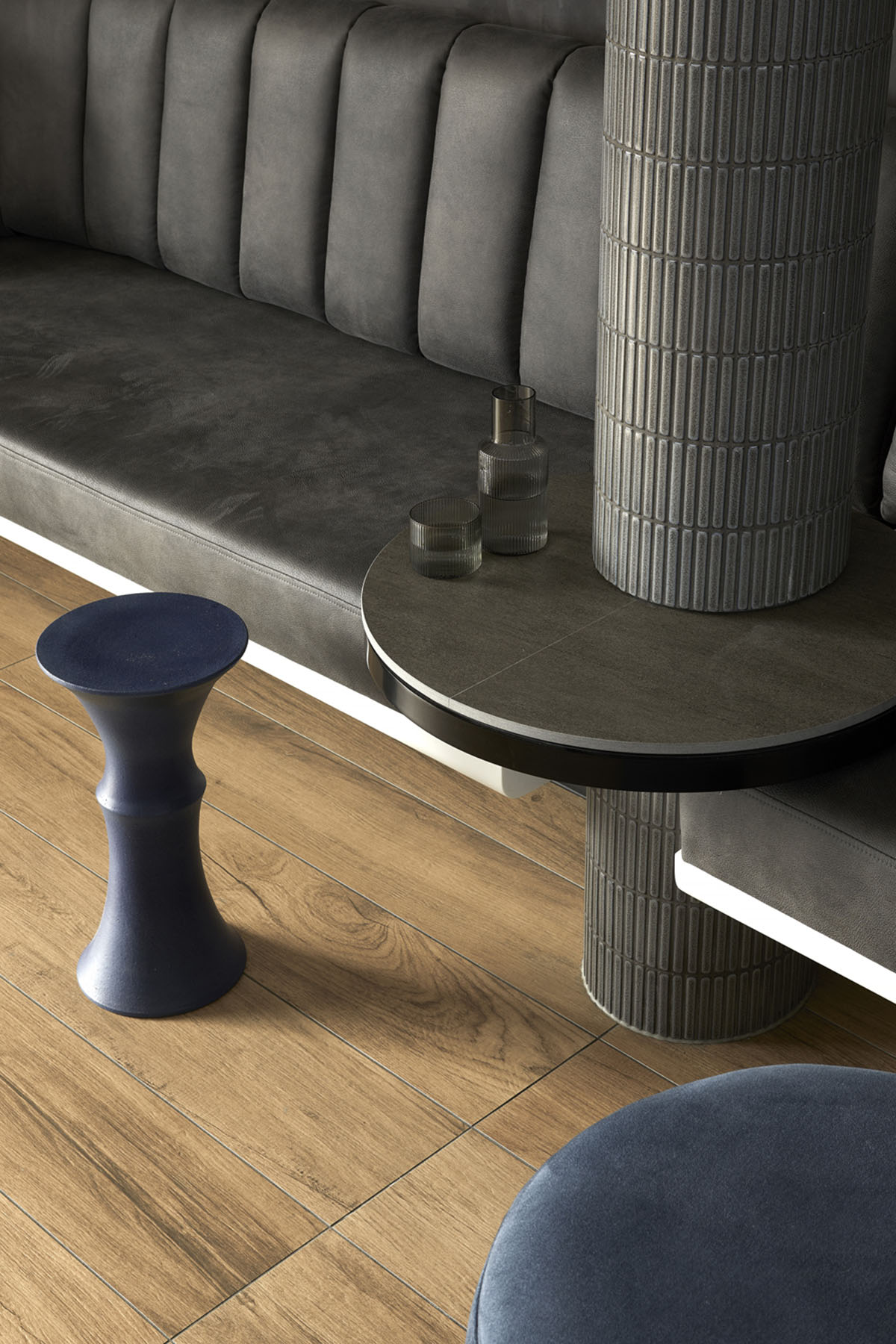 The building materiality is of a simple sheer white render offset by a generous percentage of glazing and black, fine detailing. The contribution to the streetscape is that of a highly resolved architectural building with a distinct nautical language. The sea surrounding and beach location are motivating. The spherical shapes of both the interior and exterior were inspired by a boat, something our clients love being on. Transitioning from the upper to mid-level feels like descending from a boat deck to a cabin below. A private main bedroom suite was positioned to the rear of the property in order to facilitate the clients’ request to sleep in a quiet space. Careful placement of windows allows bay views and winter sunsets from the bedroom, shower & sauna. Like a super yacht, we created a roof deck which used the building form to shield it from prevailing winds; an important client requirement.

Despite four surrounding neighbours, rigorous digital studies enabled the upper-first floor, living, dining, kitchen and alfresco to frame the 270-degree bay/city skyline view. Stepped over three plates and a vaulted ceiling large enough to view through internal spaces, uninterrupted, bay views were achieved. Frequent entertainment created a client's desire for a theatrical experience when ascending through the house. From driving into the basement, a lift capable of stopping at all levels and arriving at the pinnacle upper first-floor level our clients is able to make a dramatic entrance into their home. 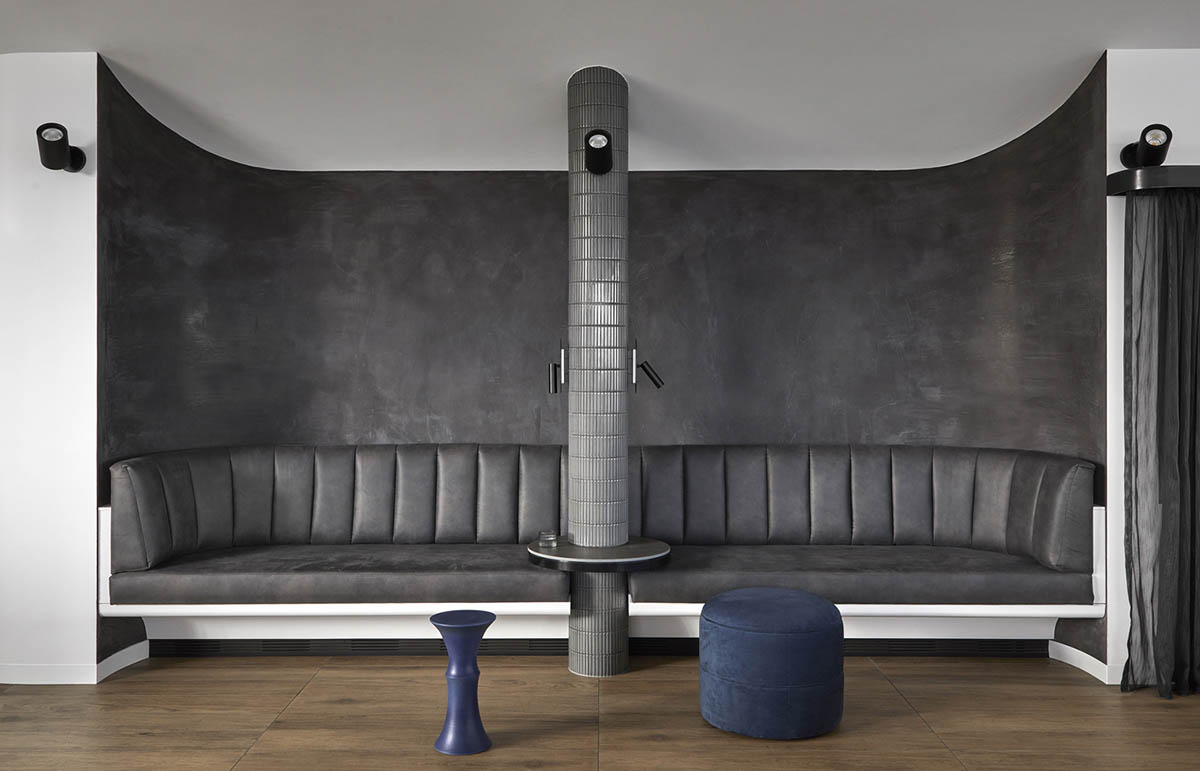 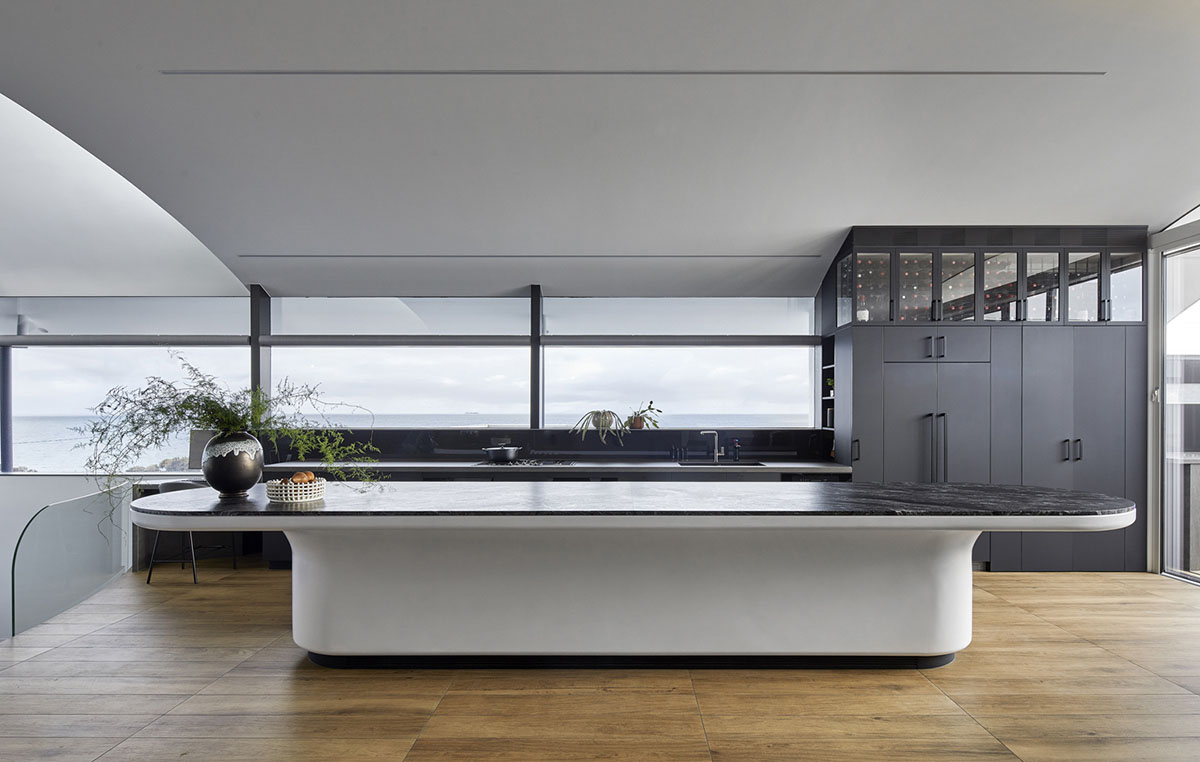 The Black Rock House won the 2022 TIDA Australia Architect Suite of the Year.