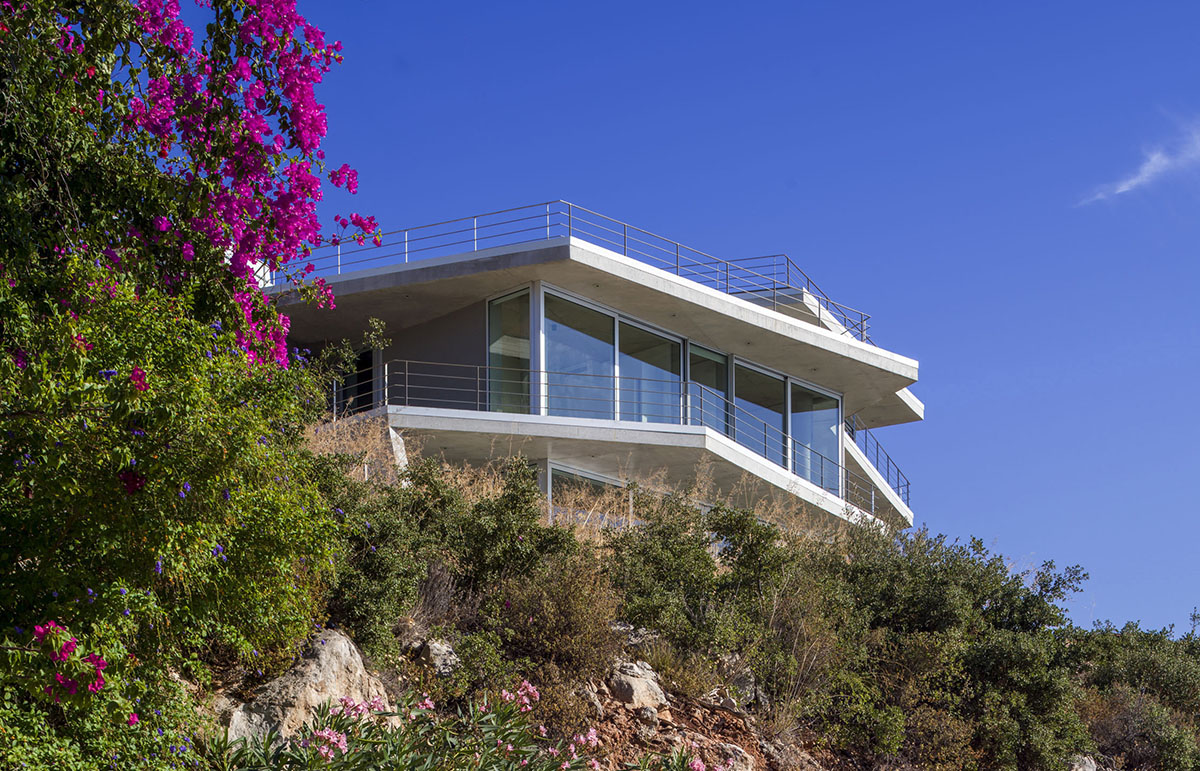 Istanbul and Berlin-based architecture practice Salon Alper Derinbogaz has completed a summer villa that mimics topography lines of the terrain on a limestone hill in Izmir, Turkey.

Named Villa Topos, the house is characterized by angular reinforced concrete slabs in which the mass's geometry acts as a continuation of the existing sharp topography. 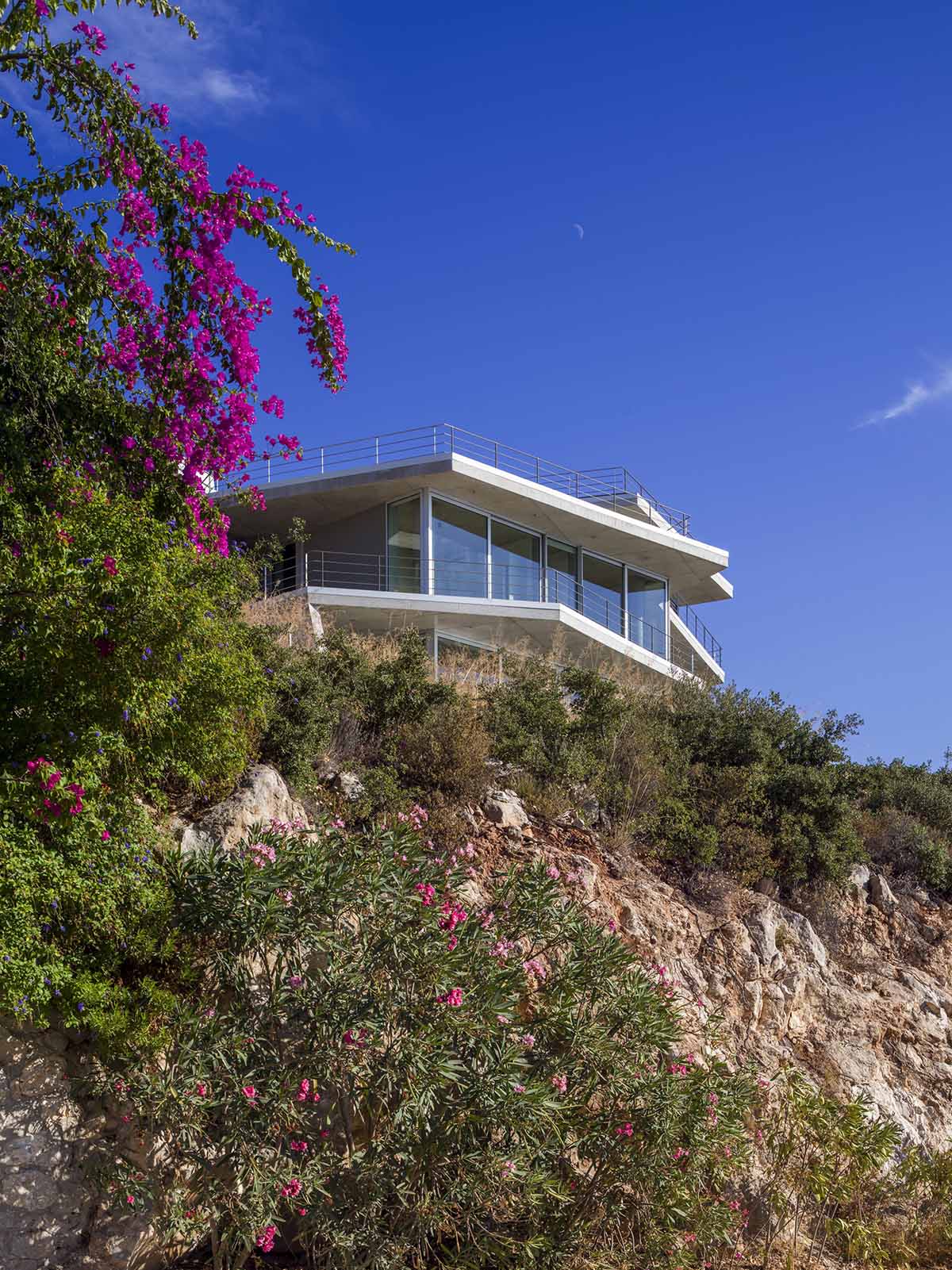 Salon Alper Derinbogaz, led by Alper Derinbogaz, takes inspiration from the sharp topography of the surroundings, which transforms itself into "a simple geometric structure that settles in the Aegean landscape."

Reminiscent of geological formations from afar, the structure offers a layered appearance and focuses entirely on the surrounding landscape.

The villa is buried into the topography, aiming to extend the relationship with the earth in order to reach zero operational carbon emission. This approach enable to benefit from the use of internal thermal mass to stabilize climatic conditions inside. 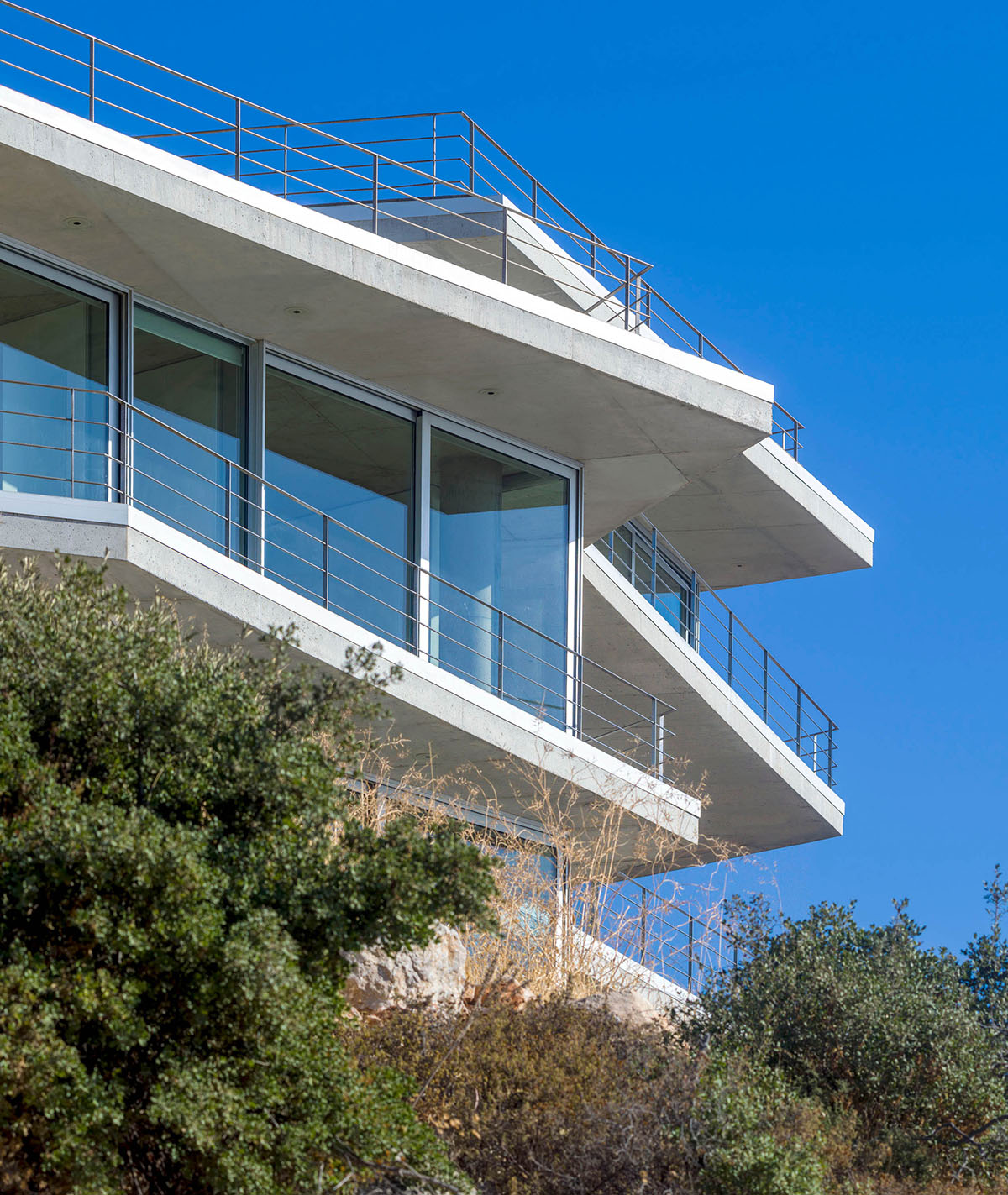 The building mass is enriched with terraces and reinterpreted as "the continuation of abstract topography lines" in order to multiply the structure-ground encounterings, increasing open areas, and breaking the western sun to optimise the access. 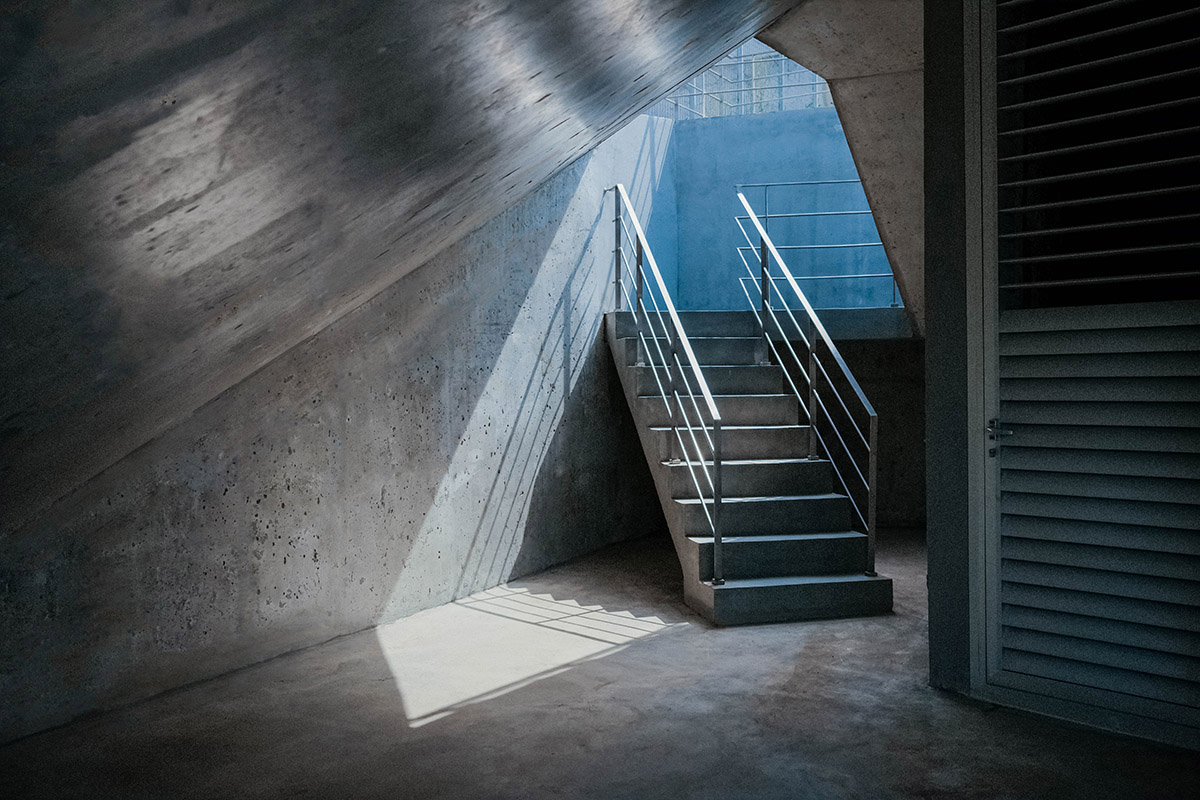 The building opens up panorama

While the building opens up panorama towards the natural Aegean landscape of,  the staircase at the back side of the structure turns into "a cinematic apparatus" that moves vertically, creating uninterrupted views of the bay.

"The aim was to leave the stage open to nature and to propose a dynamic frame for the view," the studio explained.

"As you climb up to the site; the horizon, skyline and landscape of the bay recreates itself in different ways," the office added. 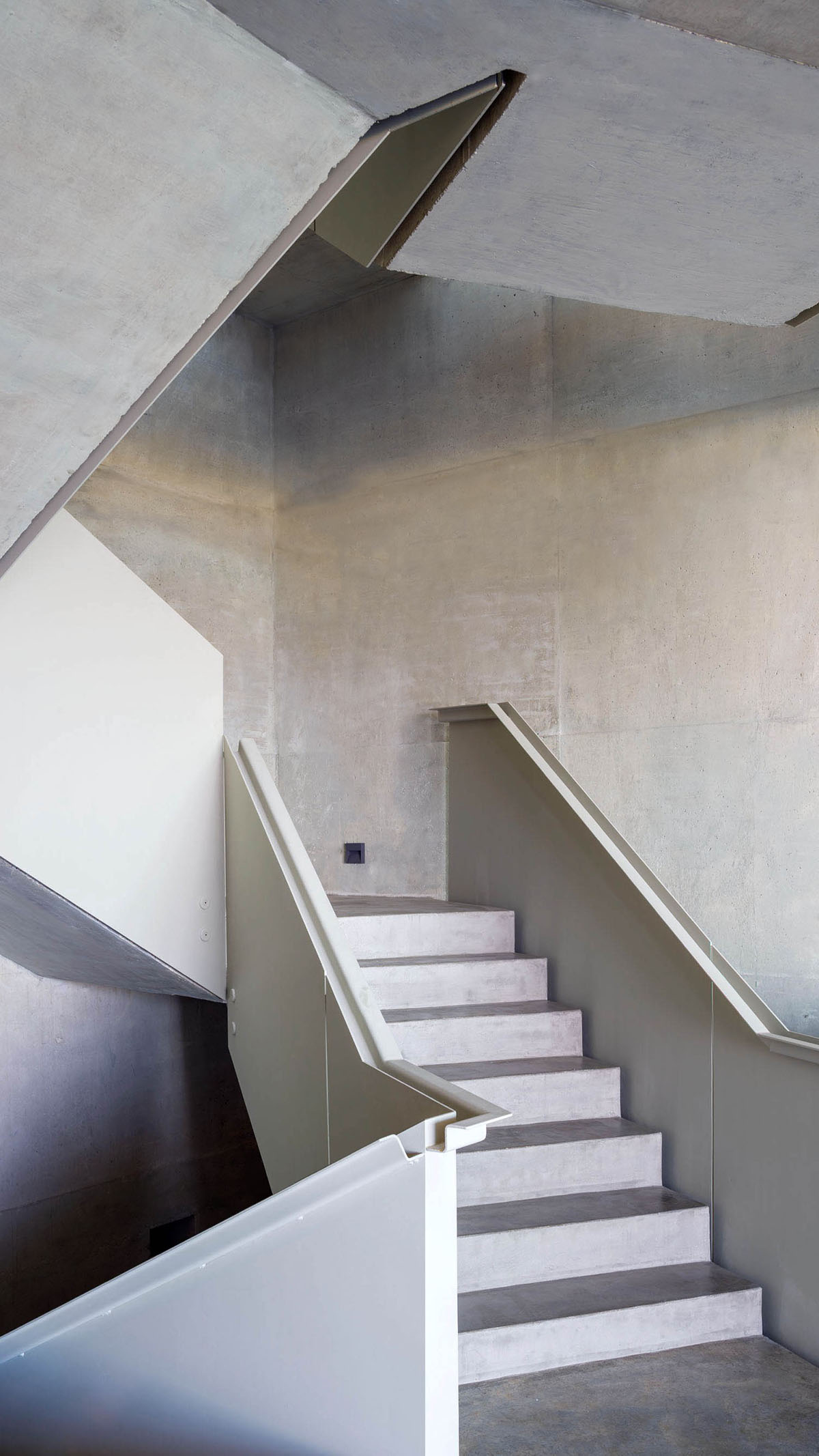 To help to reduce operational carbon emissions to zero, the studio implemented a series of strategies.

The office devised a cross study in between structural design and energy simulation of the building in which the active heat map of the building is leading to exceptional solutions for passive climatisation. 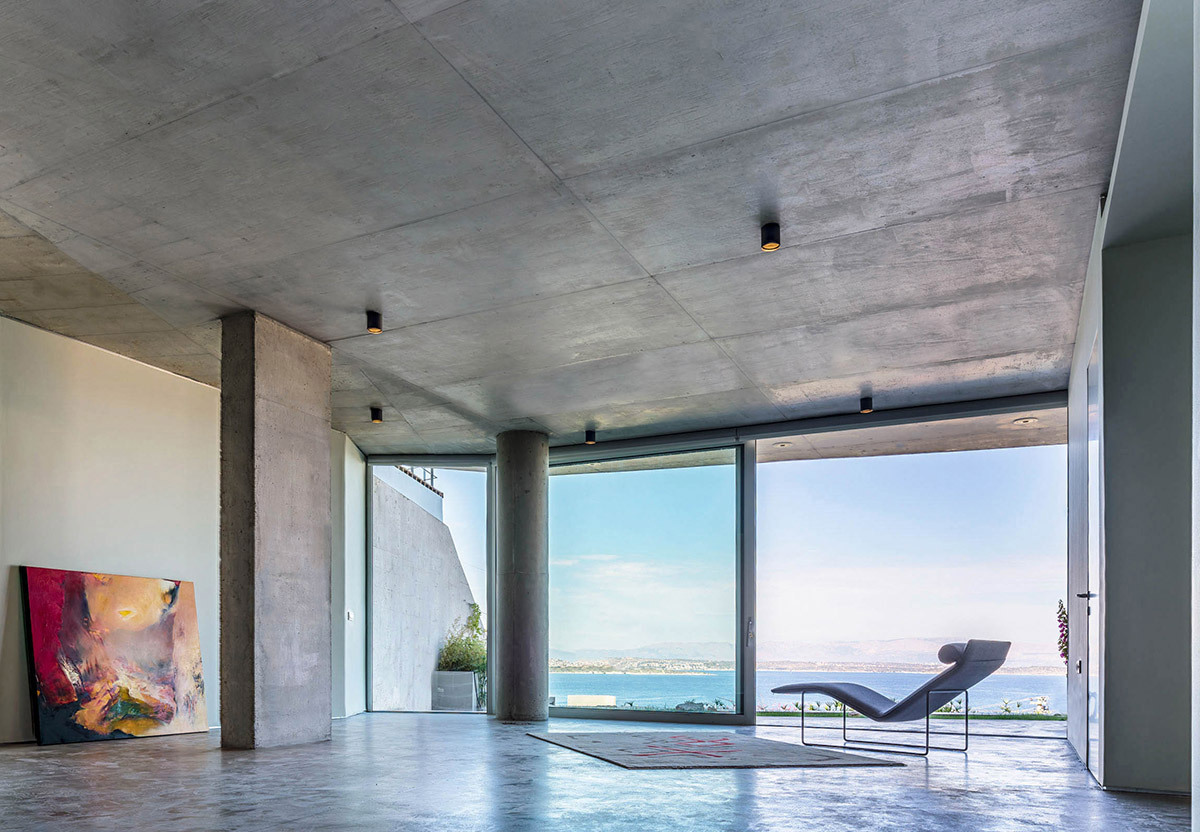 "The aim was not only to observe nature, but also to find foundational ways to better engage with it," the office added.

"The thermal mass settled under the ground provides heat stabilisation benefiting from the constant temperature of the earth."

"Wind-catching chimneys with vents in the roof are built to avoid using any energy to climatise the complete structure," the office continued.

Based on passive environmental strategies, the villa is ventilated naturally throughout the year. Further, the wind works as a natural machine to circulate clean air, and the earth works as another one to make the air cooler or warmer depending on the time of the year.

"The solid mass of the concrete structure, that has a high value of specific heat capacity, increases the heat mass on the buried façade where the light cannot reach," the studio continued. 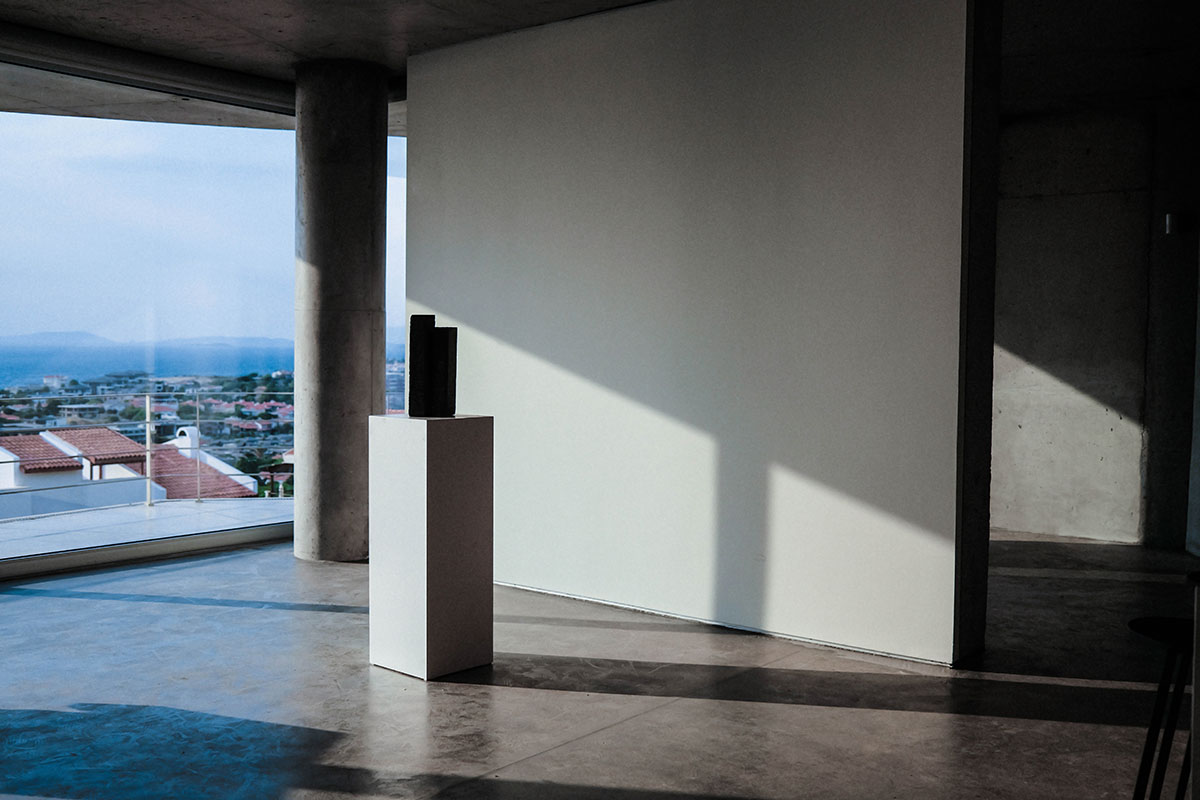 "The house takes about eight hours to catch the surrounding temperature, but this buried facade that had been cooled down over the night, cools the complete structure during the daytime."

"Thus, the thermal difference between day and night is balanced, and the reinforced concrete structure gives enough time to tolerate the changes," the office added.

The studio explained that "the in-between spaces in the building are non-uniform as in nature, away from producing spaces which are constant in conduct, character, or effect."

The villa offers a flexible use thanks to its large spaces, the furniture pieces or objects can be arranged as flexible as possible that can help redefine the rooms. 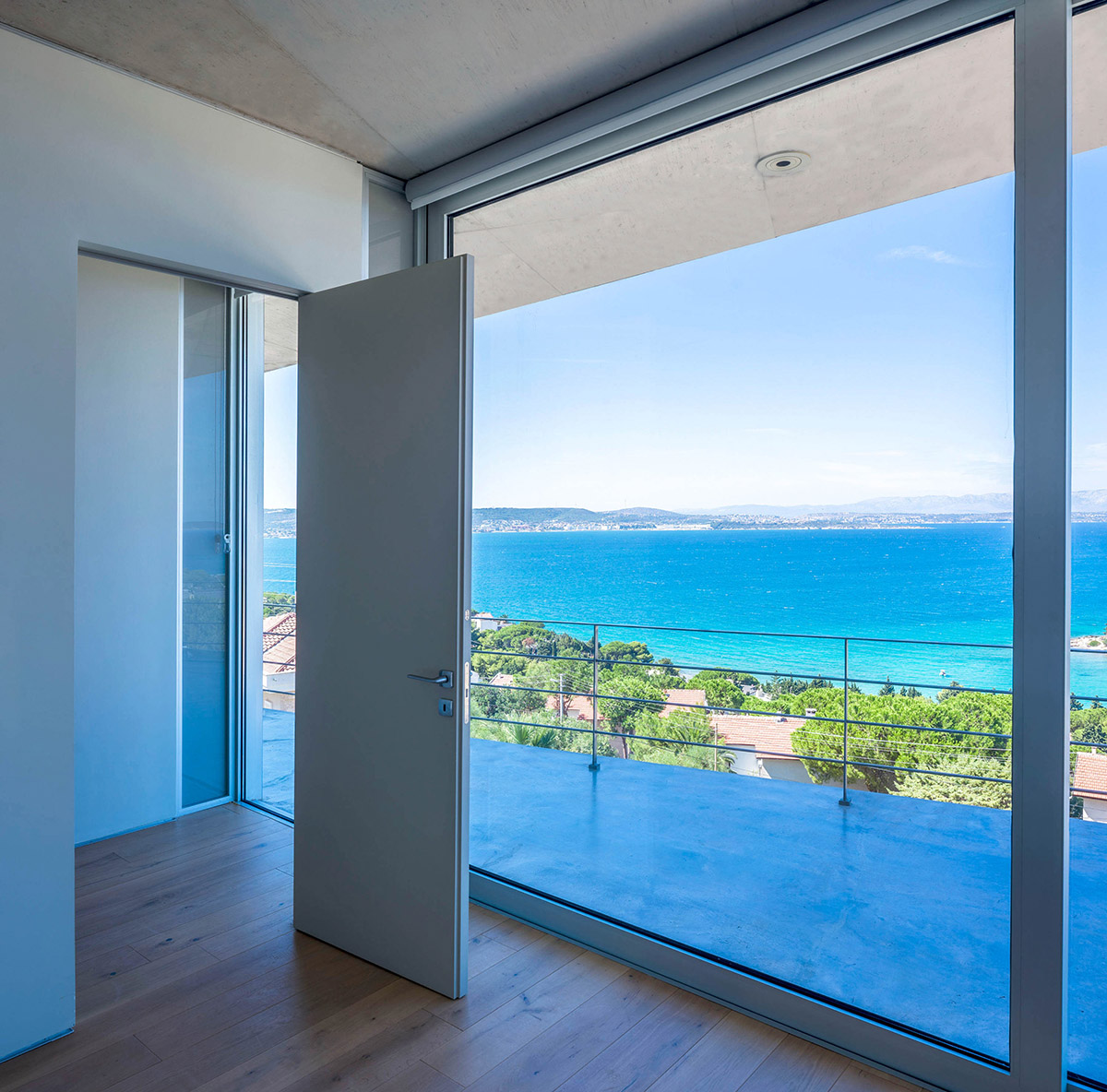 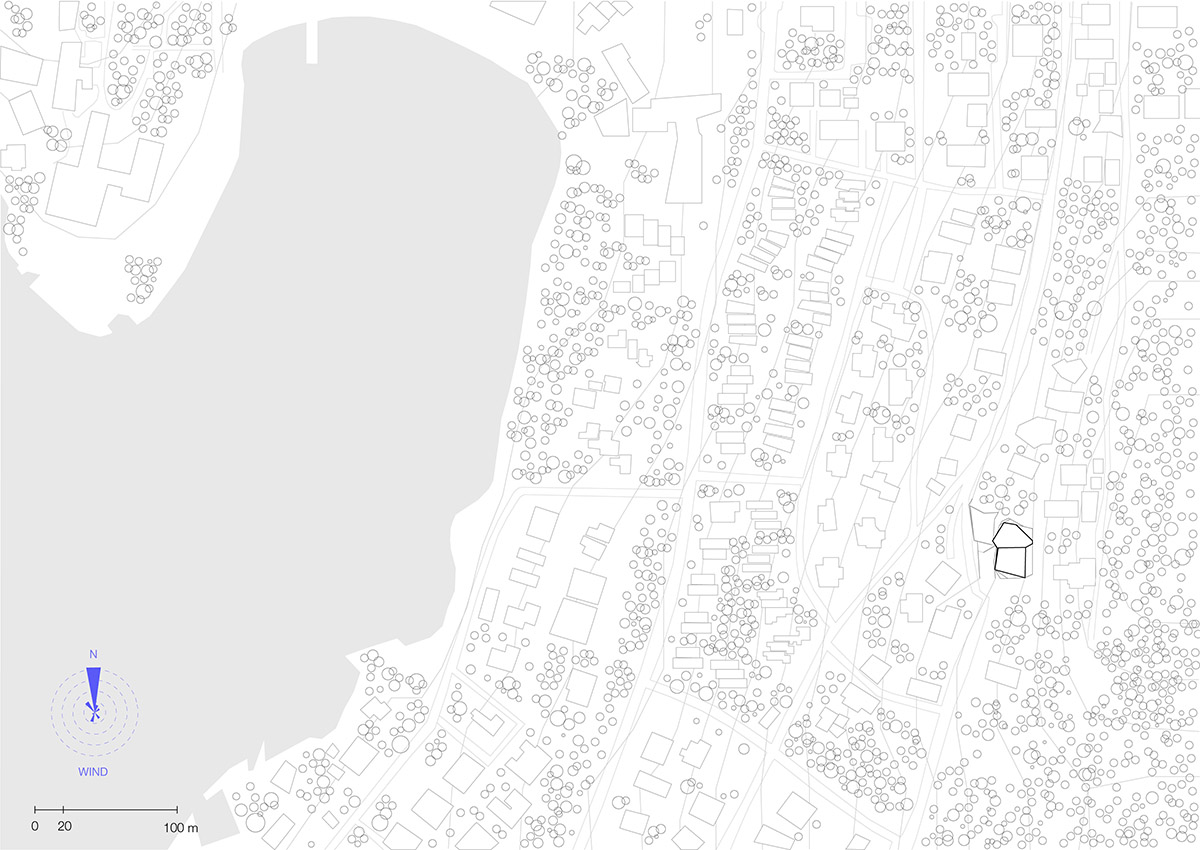 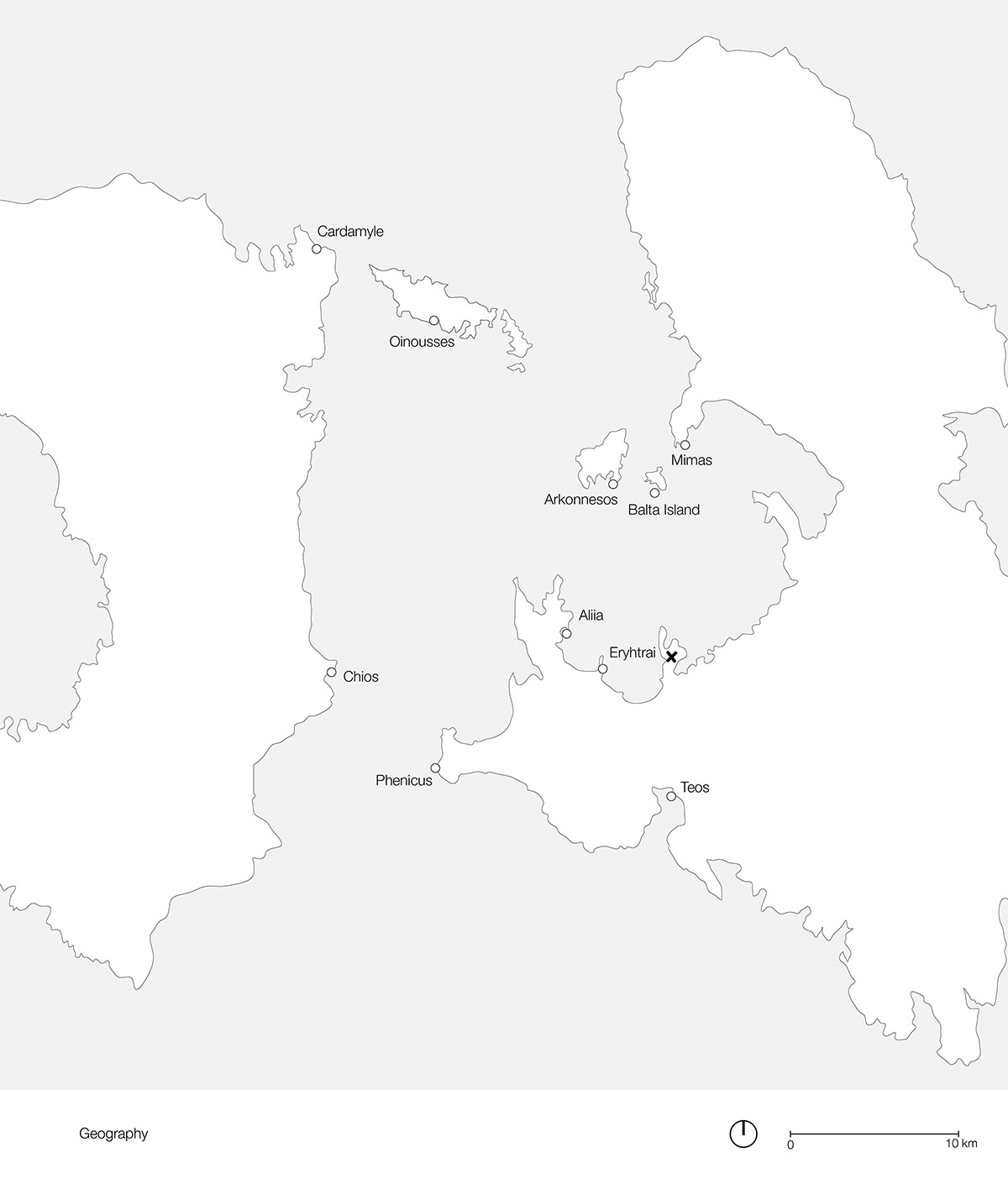 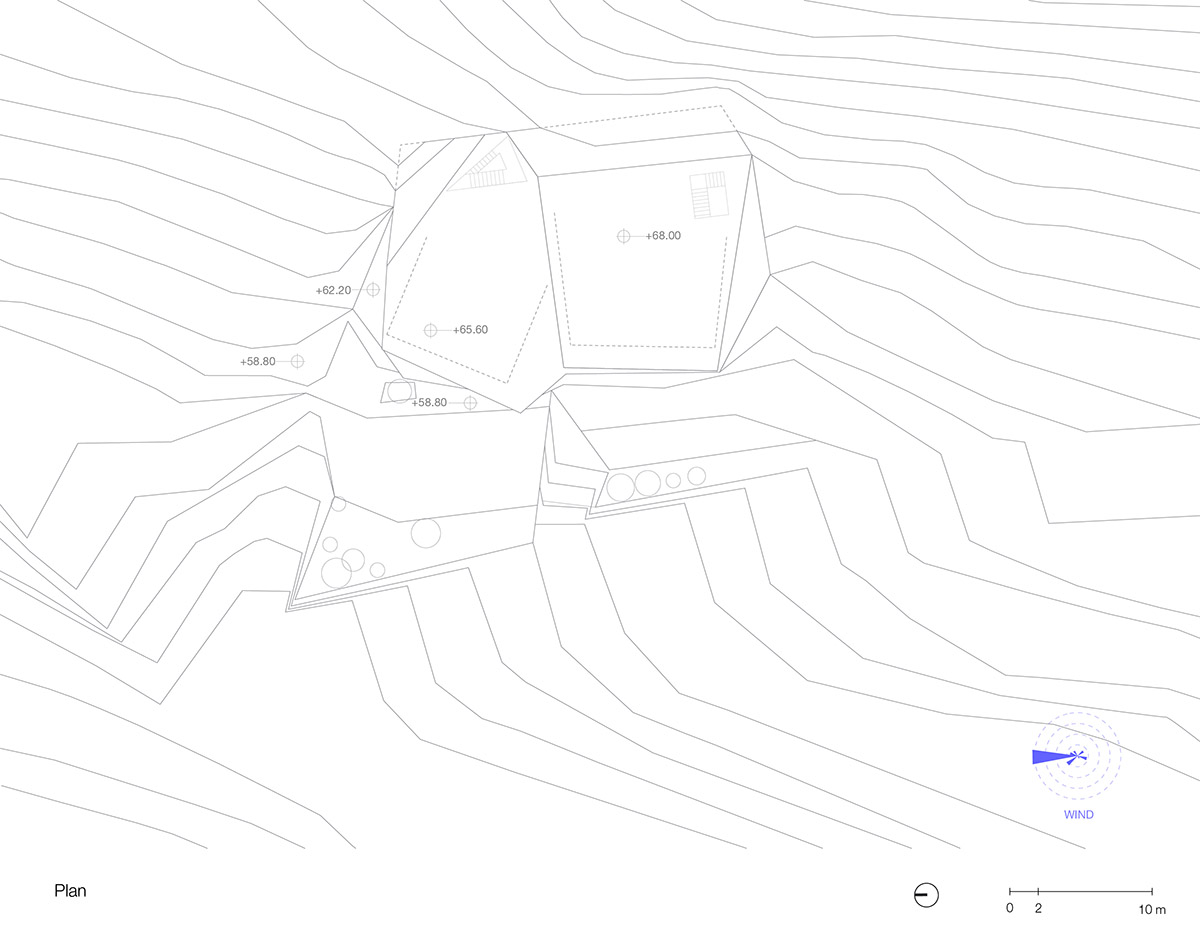 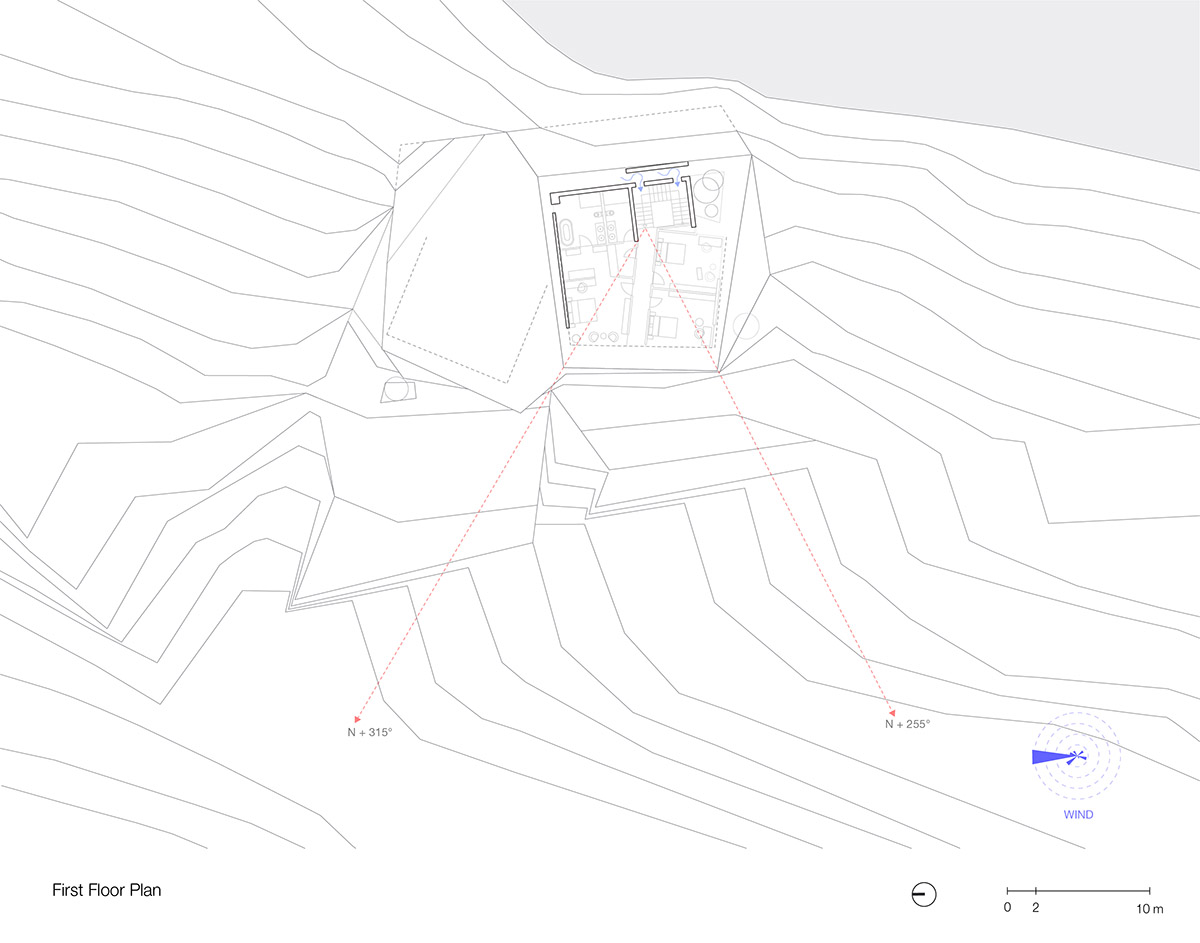 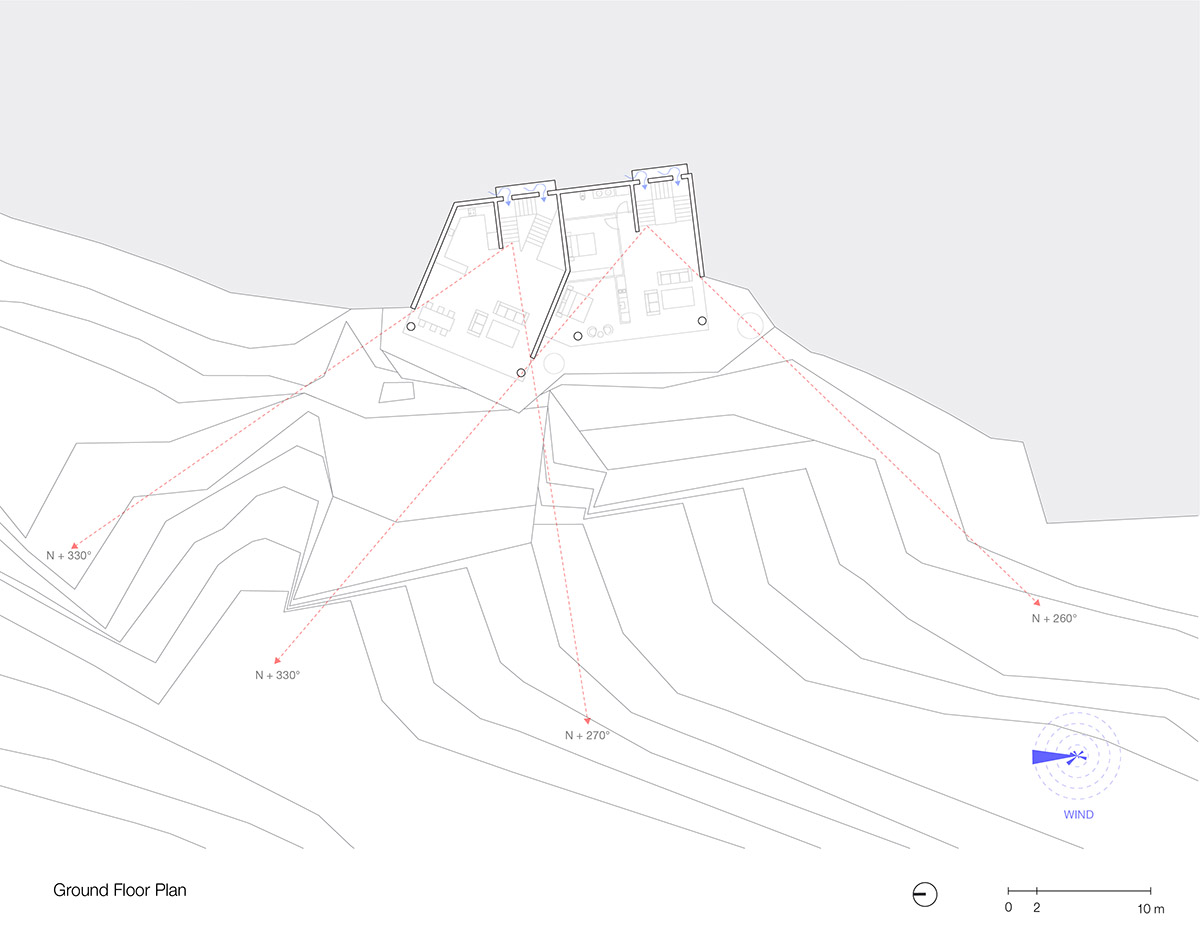 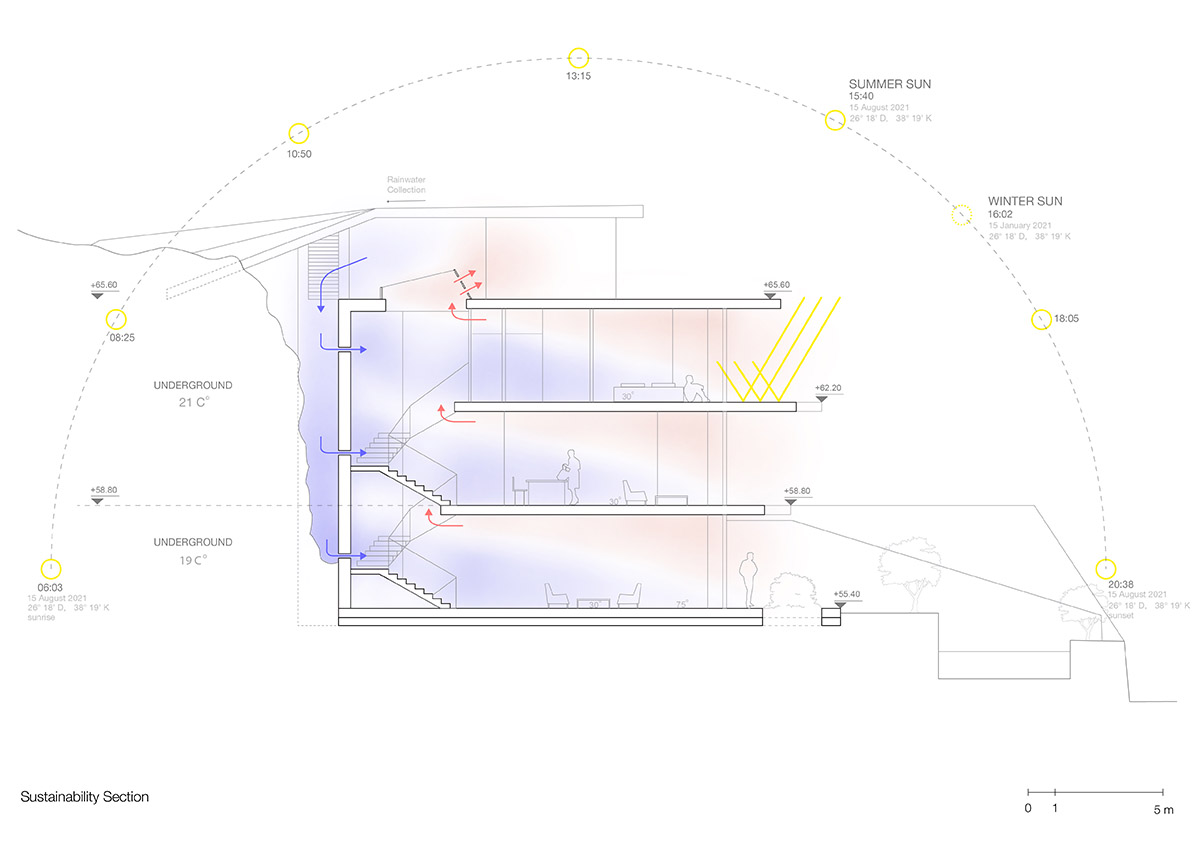 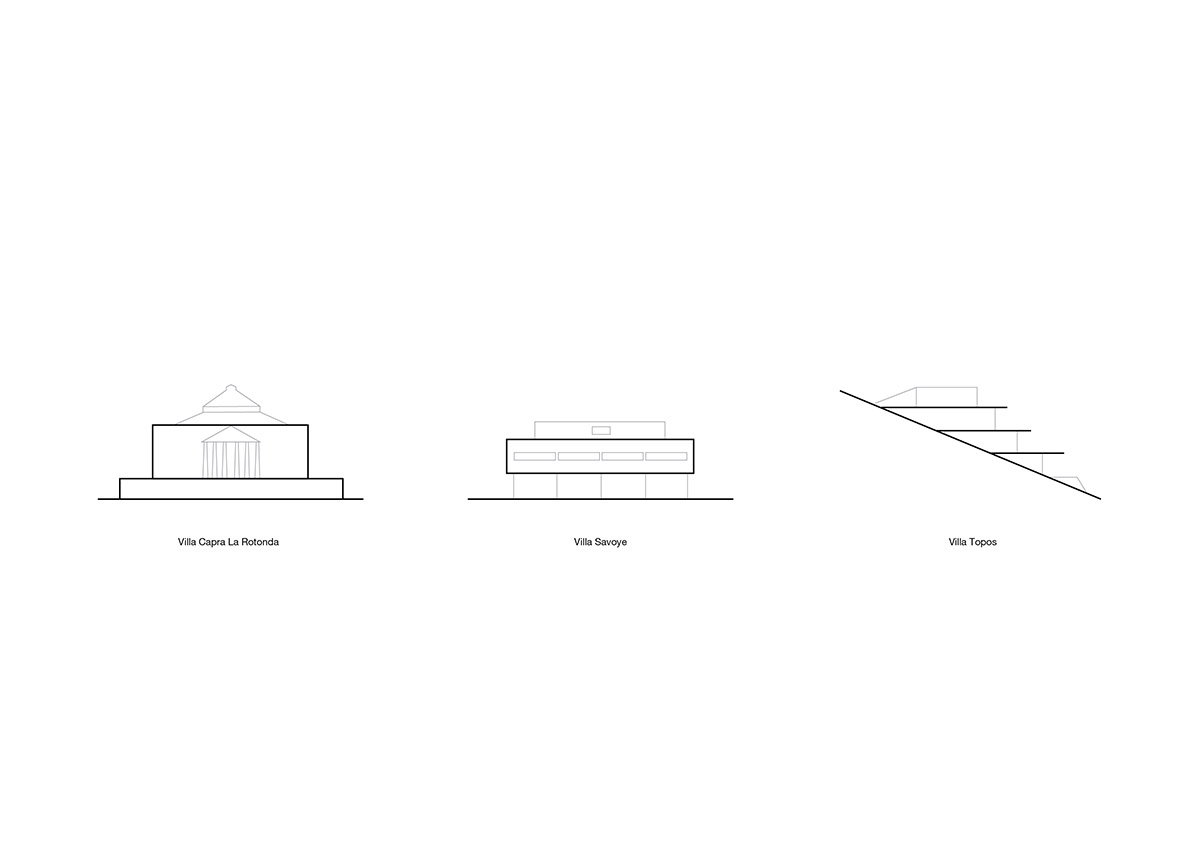 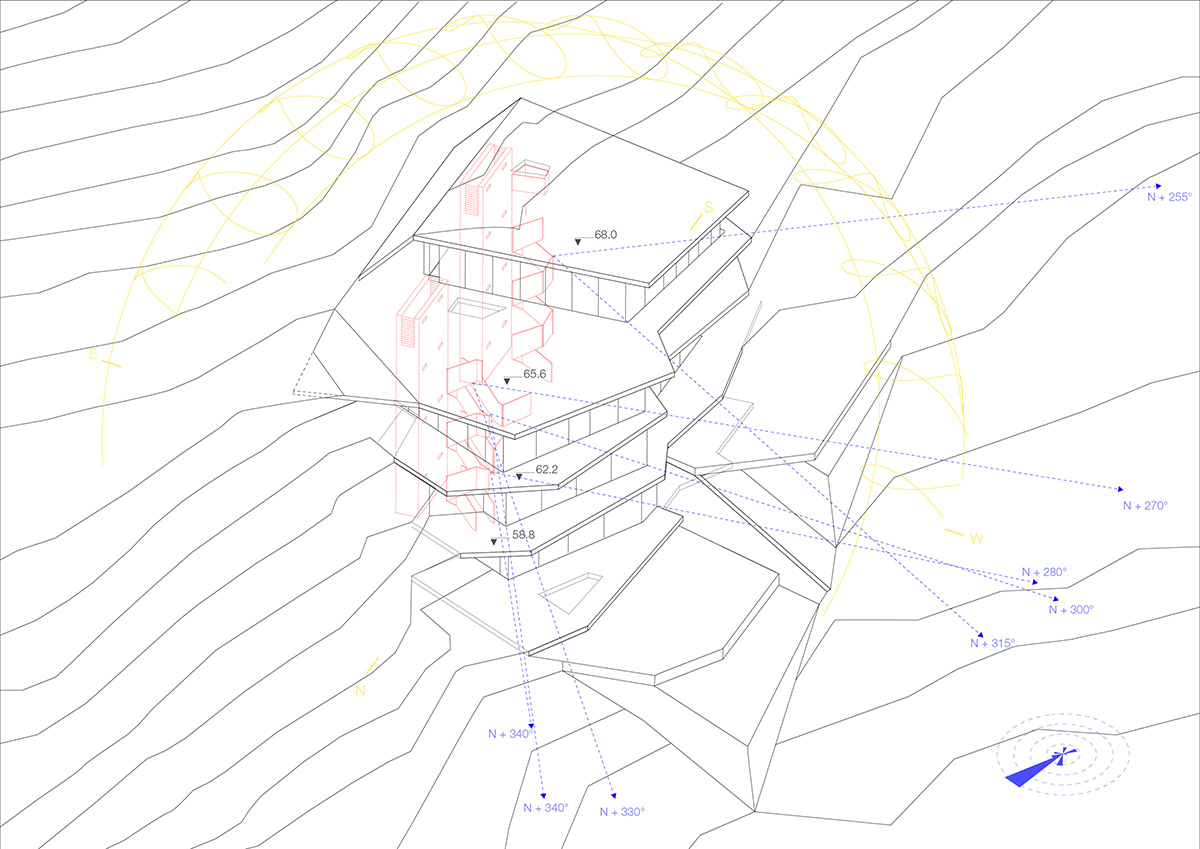 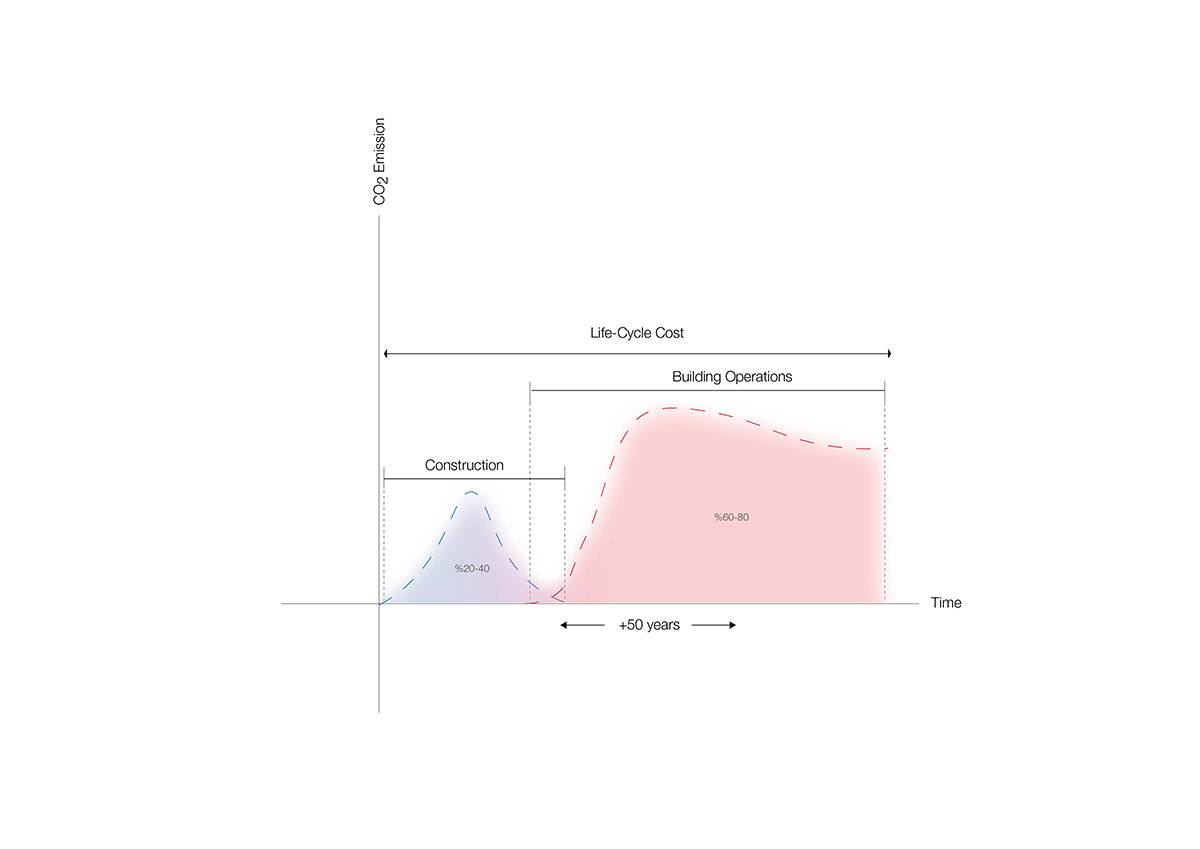 Salon Alper Derinbogaz was founded in 2010 by Alper Derinbogaz in Istanbul, Turkey. The studio produces projects regardless of type, geography and scale, including public buildings, cultural, commercial, masterplans, residential and exhibition design.

The office completed the renovation of a historic arcade passage in Istanbul. The firm's Istanbul City Museum is under construction in Istanbul, Turkey.

Video of the project can be found on this link.