Italian architecture practice Carlana Mezzalira Pentimalli has built a music school made of deep cutouts and red-pigmented volumes in Bolzano, oldest city in Tyrol, the economic centre of the Isarco Valley and the third largest city in South Tyrol, Italy.

Named Music School of Bressanone, the 5,312-square-metre building has been designed to welcome over 1000 students.

Featuring textured red-pigmented walls, the Treviso-based studio first-handedly curated all the design phases of the new Wunderkammer: the Music School of Bressanone, an institution founded in 1961, and a landmark for the entire region. 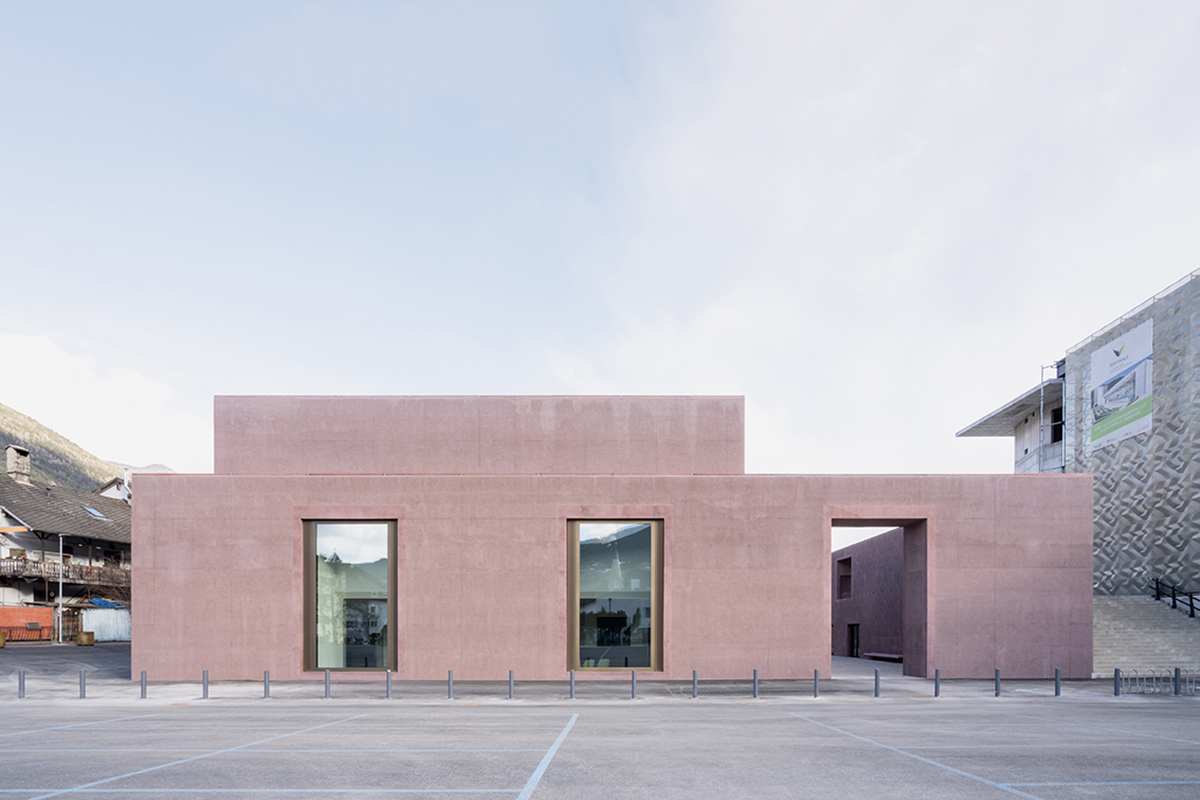 The school is located in the northern area of the city, close to its ancient core, the project represents the new gateway to the city, a focal point of the Priel area, hosting public facilities such as the Acquarena municipal swimming pool, and the Vertikale climbing wall.

Developed as part of a larger plan, the new schools includes the construction of a new underground public car park on two levels to the north, with an urban crossing park on the roof.

Its southern counterpart will feature a square with an additional underground level of public parking, which connects the Brenner state road – an ancient artery connecting Austria and Italy – with the municipal swimming pool and the historic city. 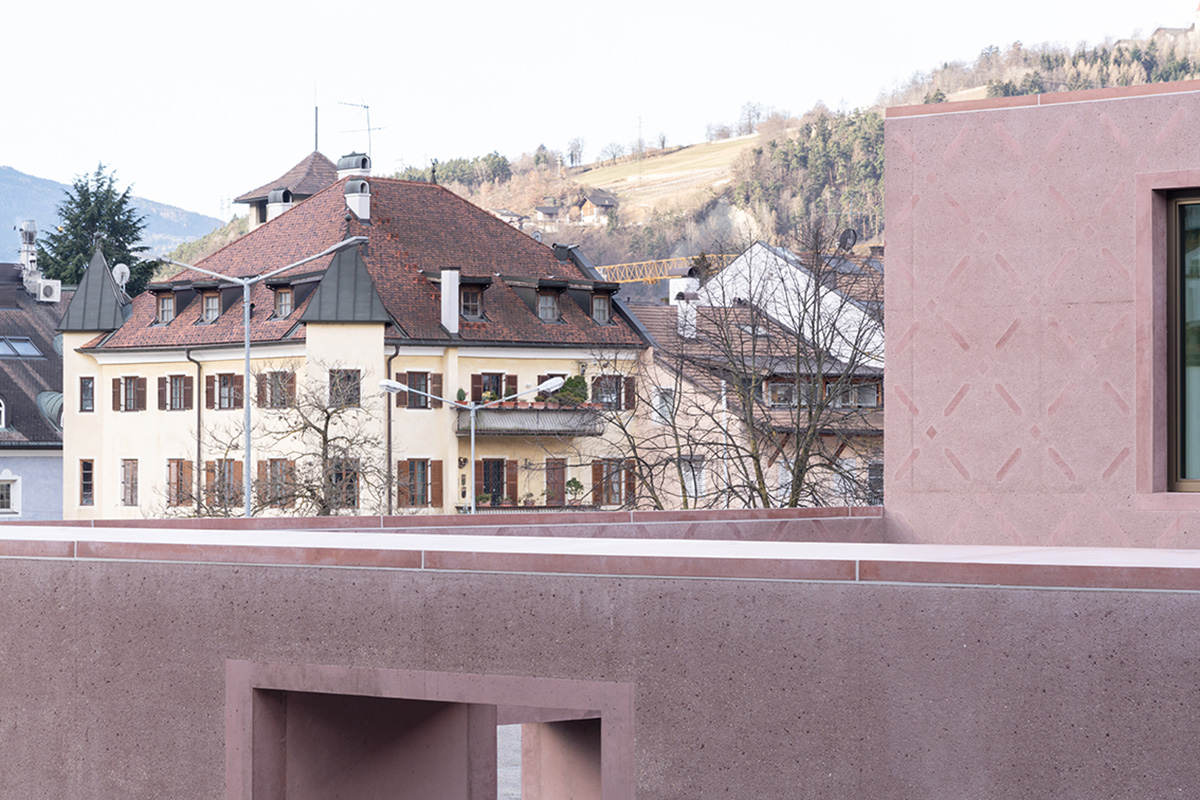 The new school is conceived as a hub for underground vehicular flows and pedestrian paths at all levels.

The building is also the north face of the future square, surrounded to the east by the climbing wall and the municipal swimming pool. "The School of Music guarantees the appropriate spatial alignment to complete the new urban plan and resolves the orographic dilemma and the differences in altitude," said Carlana Mezzalira Pentimalli. 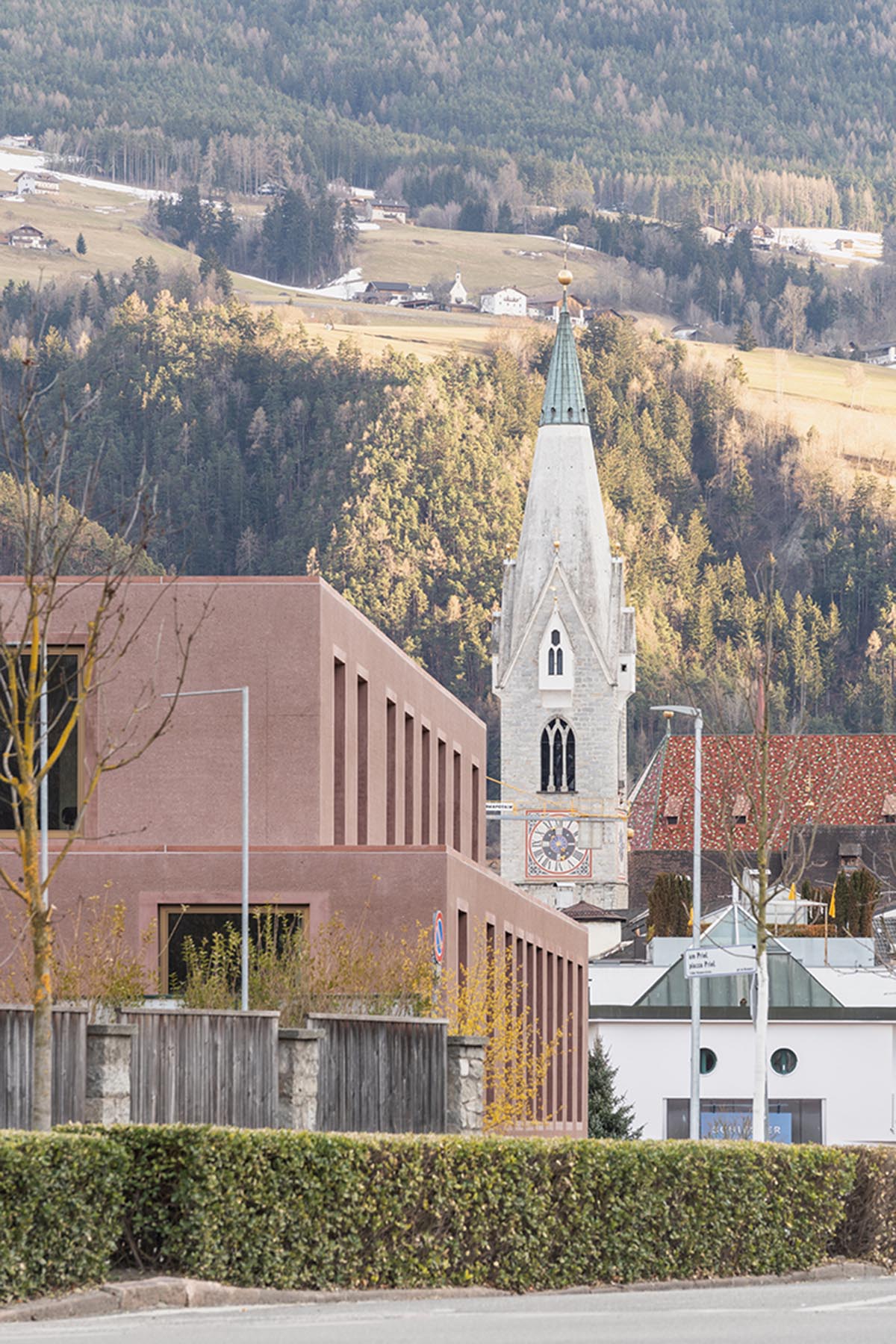 Designed as a compact volume, the architects connected all areas and made easily accessible, tessellating the square with the parking lot, the buildings of the Music School and the spaces of the Banda Musicale and Alpenverein associations, arranged within a compact volume north of the climbing wall.

"The result is a continuous parterre distributed on several levels," added the studio.

The architects stressed that "from a morphological perspective, the project approaches the historic city with its settlement principles, to respectfully reinterpret the archetype of the enclosure." 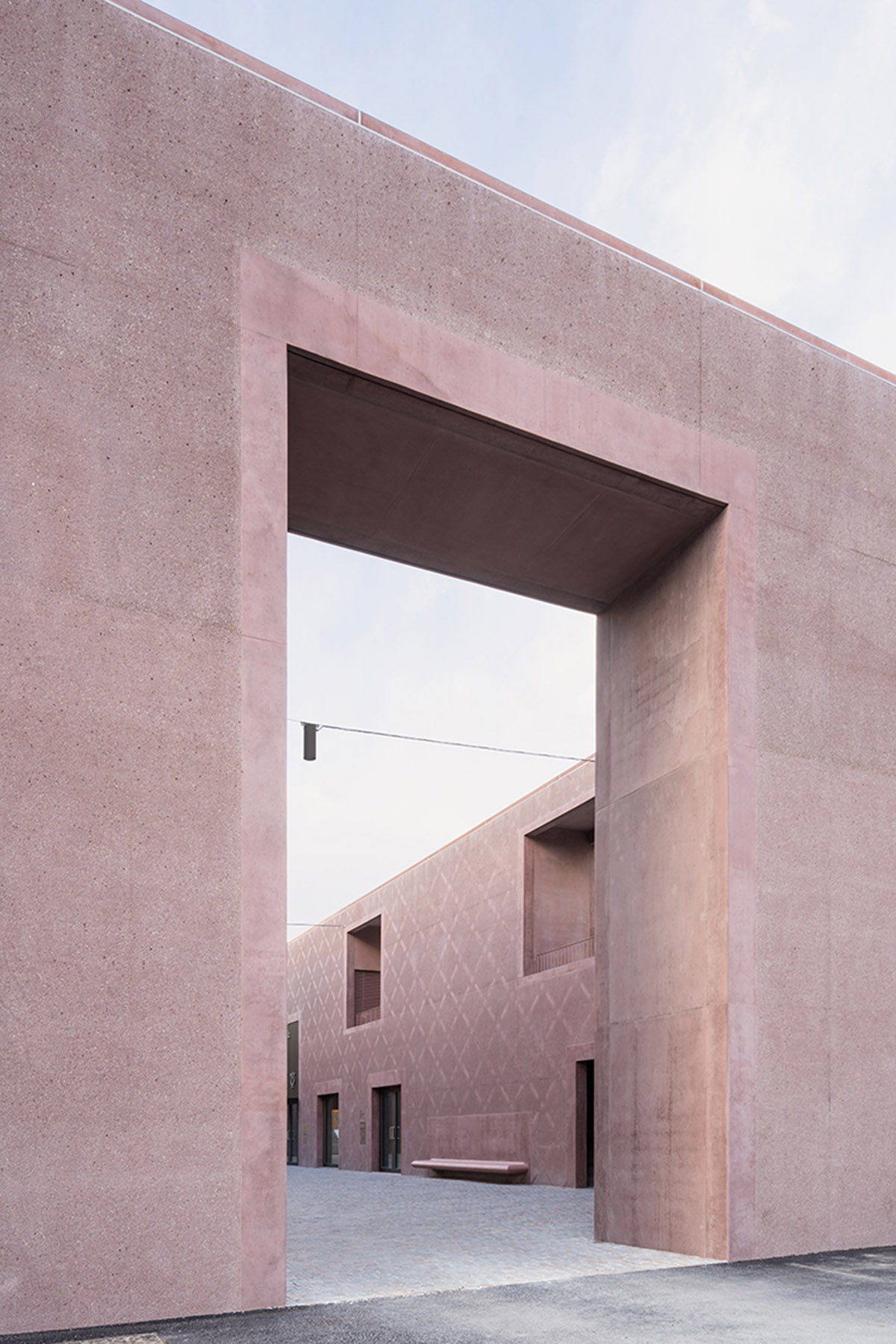 According to the studio, the new school was aimed to integrate into the urban fabric, the architectural language of the school is characterized by its compact and recognizable volume, within which an urban void enclosed by a fence is excavated.

While the main volume is located in the western part of the site, the school has three floors above ground and a portion of the basement. 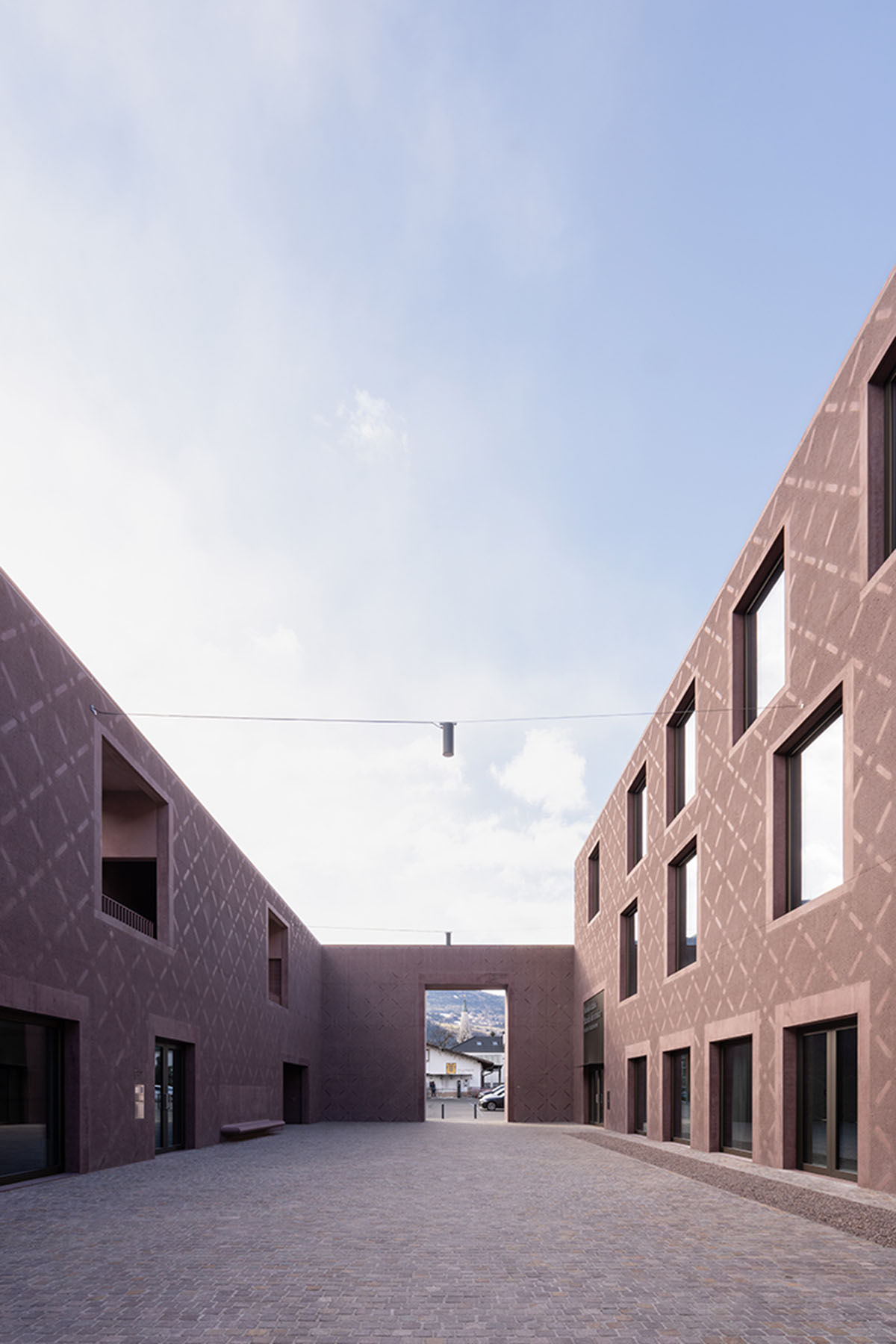 To mitigate the impact on the city skyline, the top floor is set back from the line of the external facades, obtaining an optical effect that dissolves the perception of the building.

The elevations are also conceived as wall faces, whose treatments change in relation to the context, in order to resonate harmoniously with the surrounding buildings. 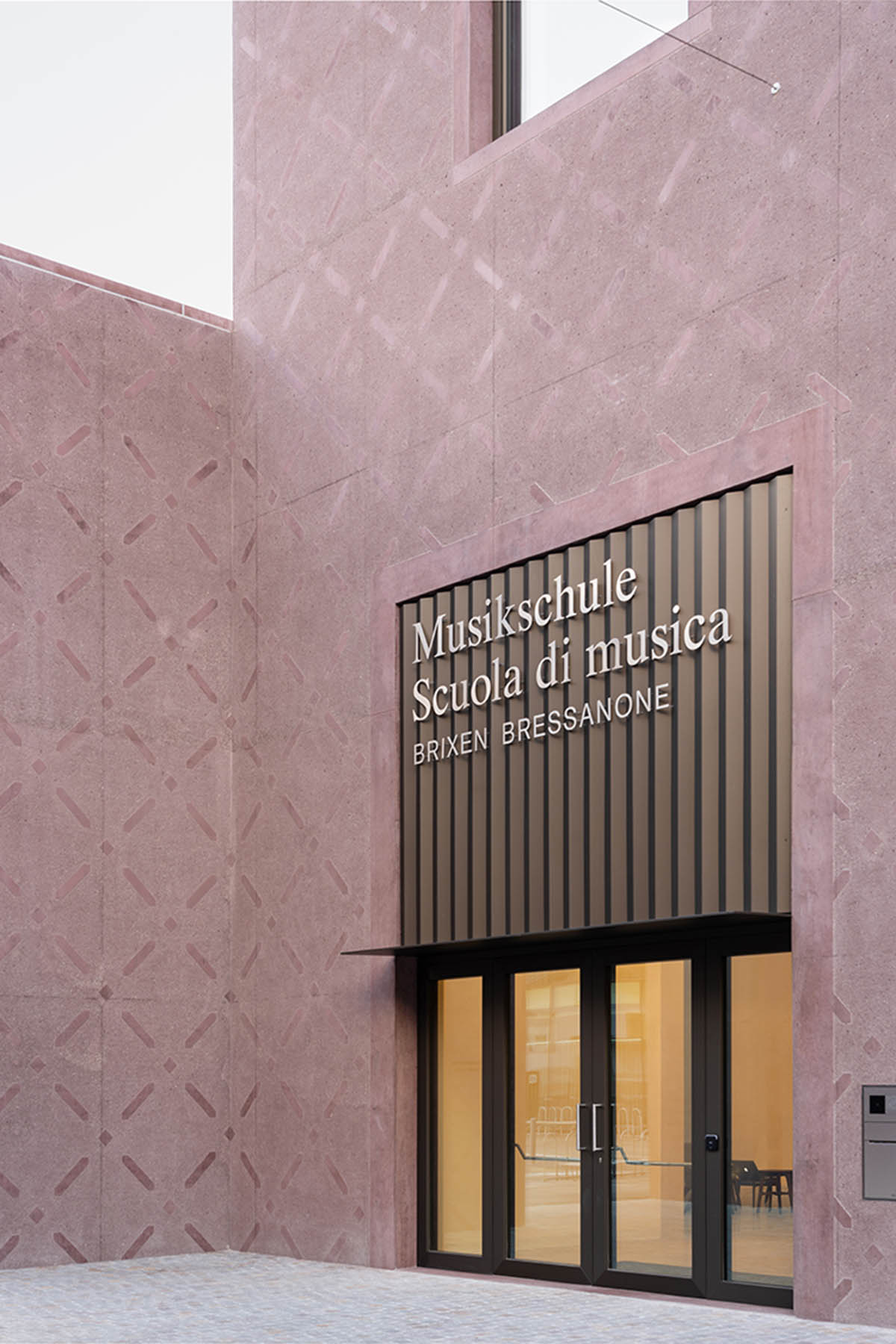 "The enclosure, which together with the volume of the School surrounds the large collective space of the courtyard located to the east, is configured as a two-storey volume, within which the vertical distribution elements and city services are located," continued the studio.

"In this way, the differences in elevation are resolved, ensuring visual continuity between the square and the future Priel Park, while the depth of field towards the mountains to the north and south of the area remains uninterrupted." 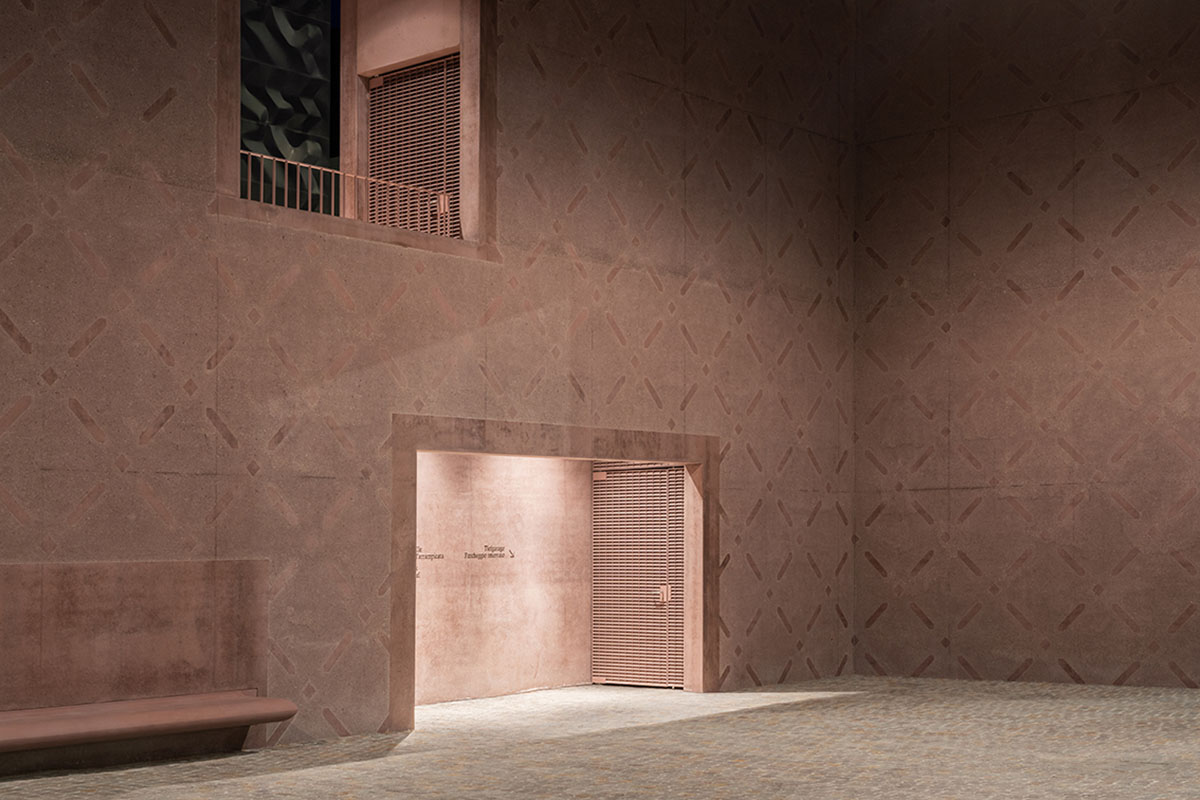 "One of the peculiarities of the project is the 'garden of music', a finely decorated open-air room, inside the enclosure and yet outside the volume of the School, which dissolves the boundary between inside and outside," said the architects Michel Carlana, Luca Mezzalira and Curzio Pentimalli.

"The ambitious attempt to tame an urban space. Hence, the name of 'Wunderkammer' (Chamber of Wonders), in reference to the historical period in which the private collections opened to the general public, making 'Mirabilia' accessible where it was formerly within the reach of a few. In the same way, we understood architecture as a community environment available to all." 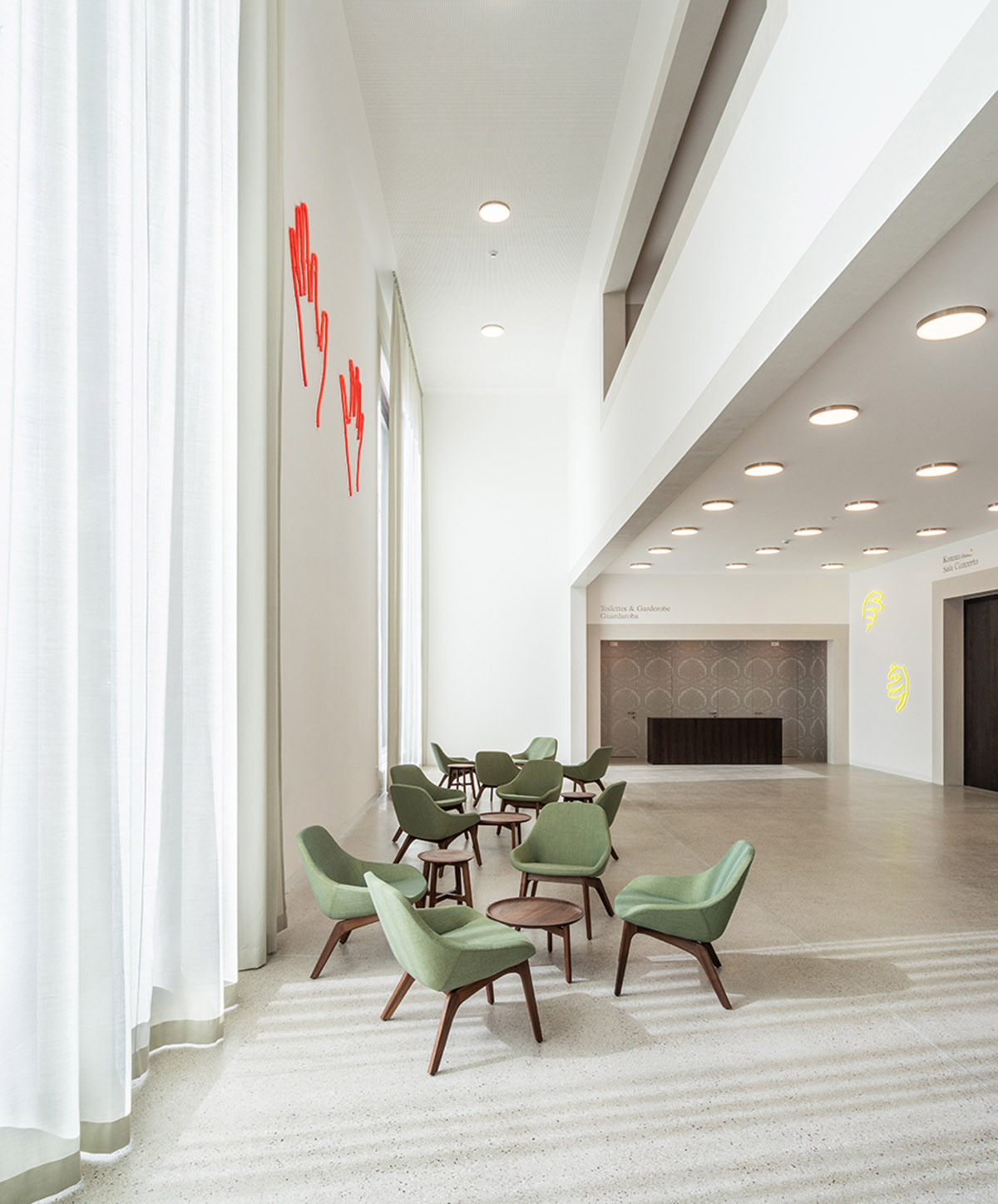 The key design components in the project are deep voids. The project of the voids dynamically distributes the flows of users accessing the city, thanks to a strong, cross-cutting horizontal and vertical permeability with accesses arranged at +0.00 and + 3.75m.

Overlooking the new Music School, the Banda Musicale and Alpenverein associations, the climbing wall and the square, the court will also serve the future parking lot, allowing a direct route to the Priel square and to the city. 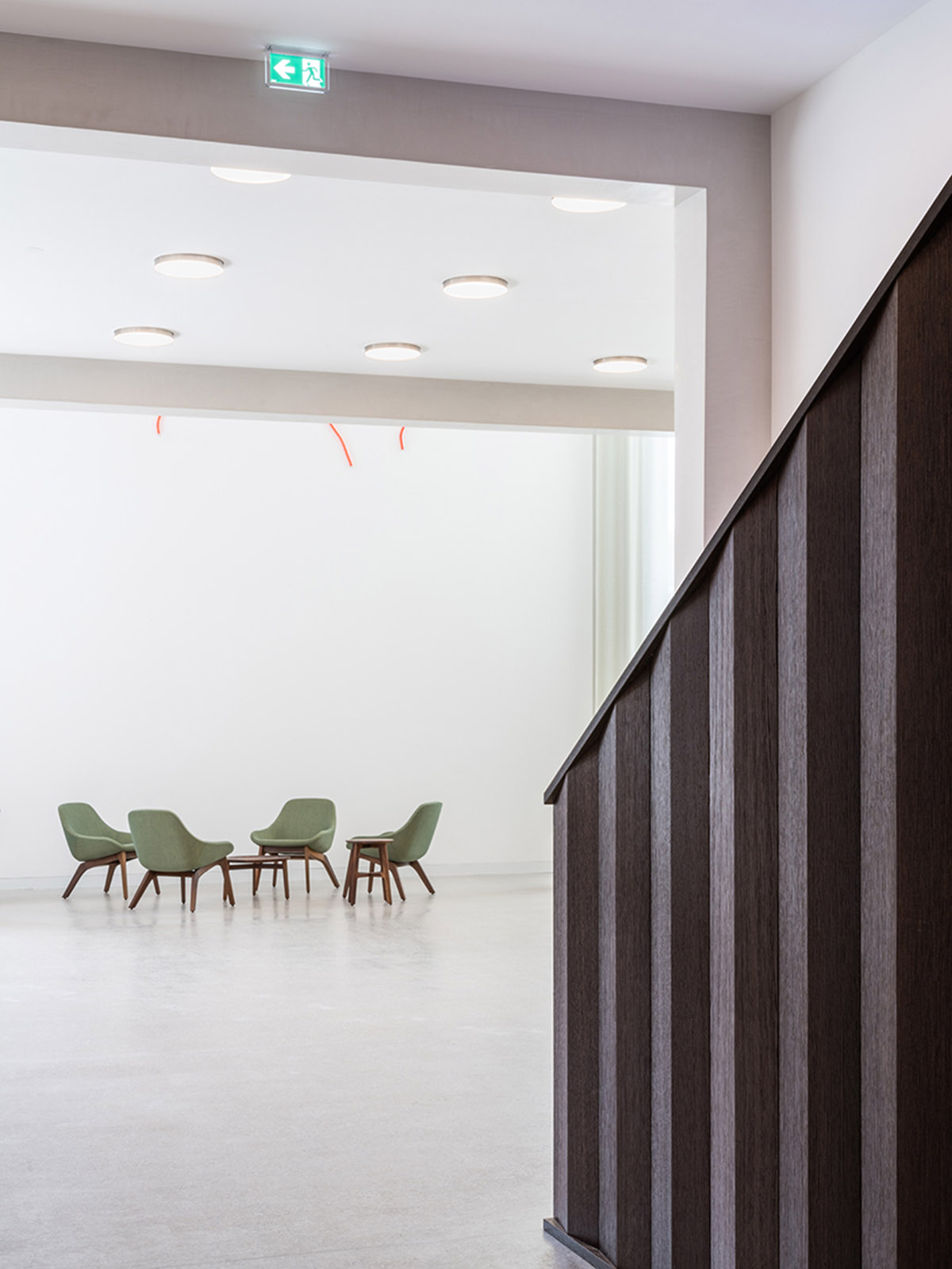 Accessible to the public at all times, the courtyard houses a series of connecting devices and collective services, such as kiosks, warehouses and vertical distribution elements.

To provide a direct relation to the garden and the future Piazza Priel, the entrance to the School and the large foyer with its regular shape for immediate orientation are located to the south of the building. 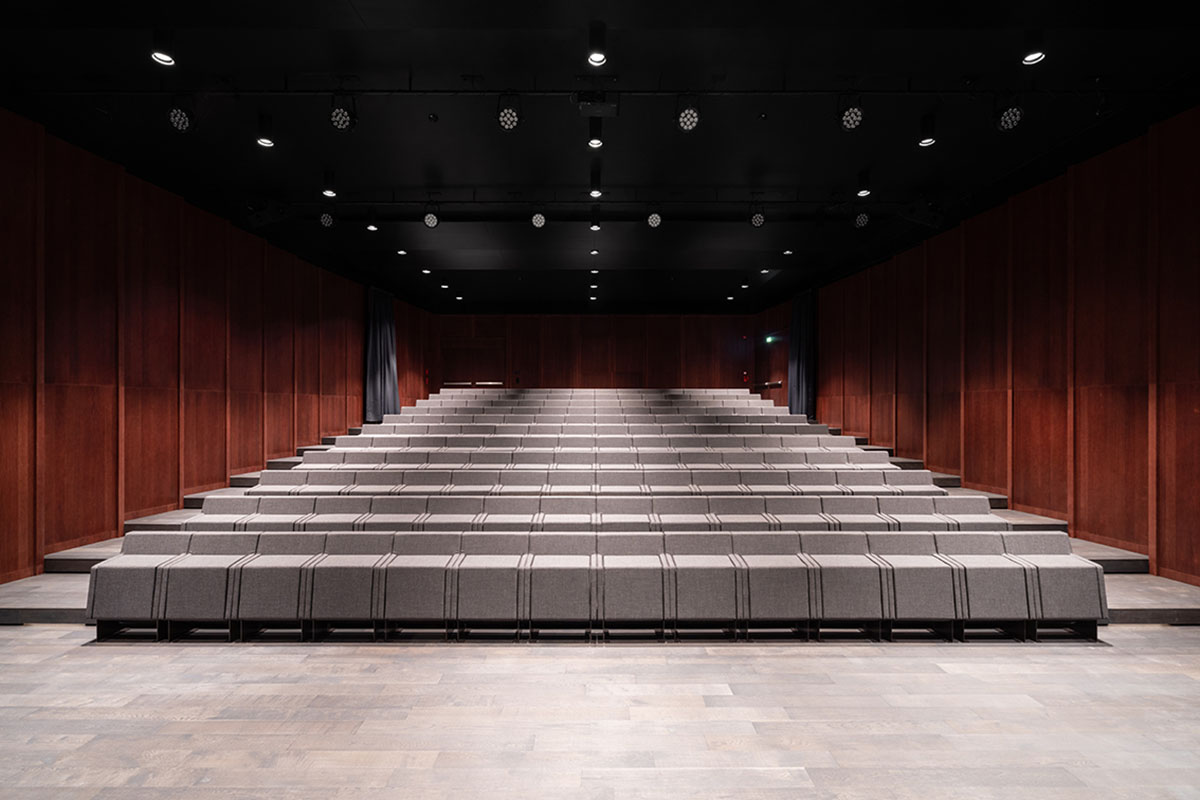 On the ground floor, the team placed the administration that also faces the same direction. The architects paid attention to a degree of independence in overall spatial organization, especially between the School and the Hall with a stage, housed on the ground floor and partially embedded in the ground, designed to host public concerts.

On the ground, first and second floors, the school houses 29 music rooms in total. The stairs and connecting elements, designed as a continuous and choreographic system starting from the entrance foyer, lead through all levels of the school. 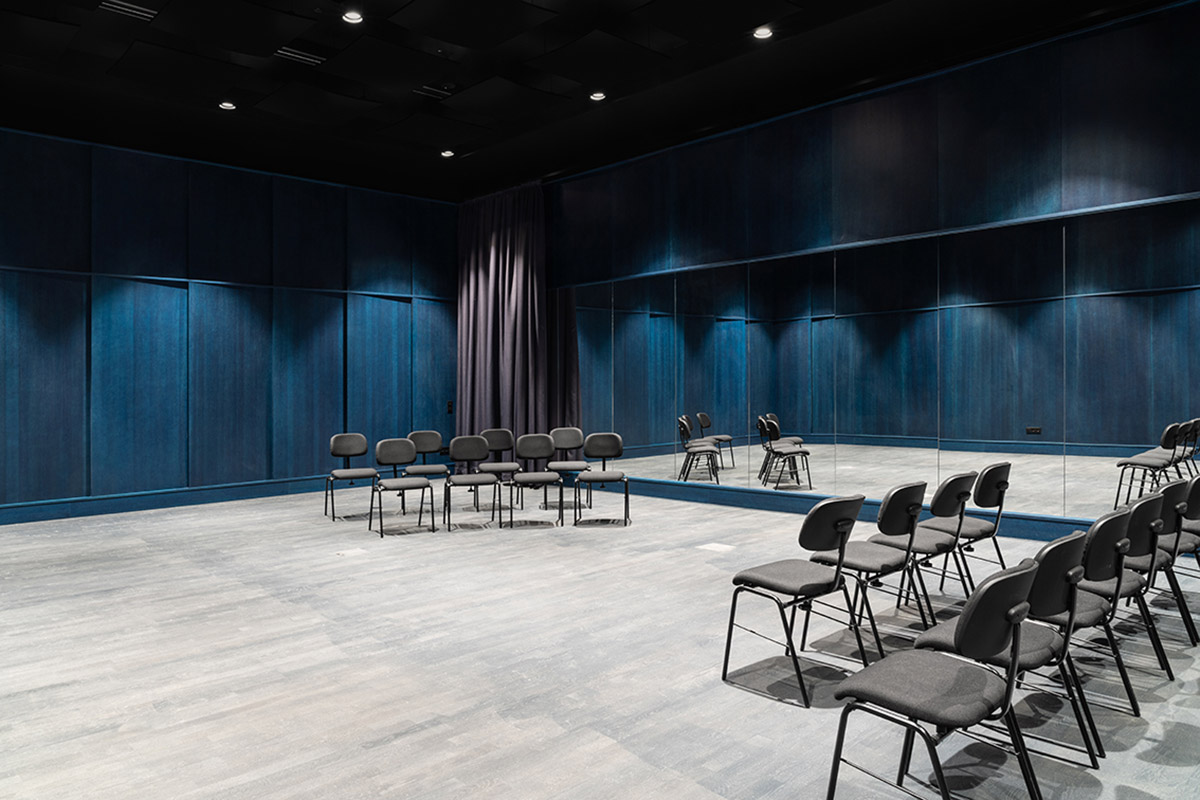 A large central corridor distributes the rooms and other elements, as well as the classrooms, are illuminated by a large skylight that allows natural light to pass through the entire volume thanks to a system of double heights. They were designed as spaces of aggregation, and as waiting, study and meeting areas for students.

A basement, accessible from the school's freight elevator, a public lift and a staircase to the north-east of the enclosure, house  technical and storage rooms for the School and the Municipality of Bressanone. A tunnel below the courtyard represents the future connection with the roads provided by the Priel carpark. 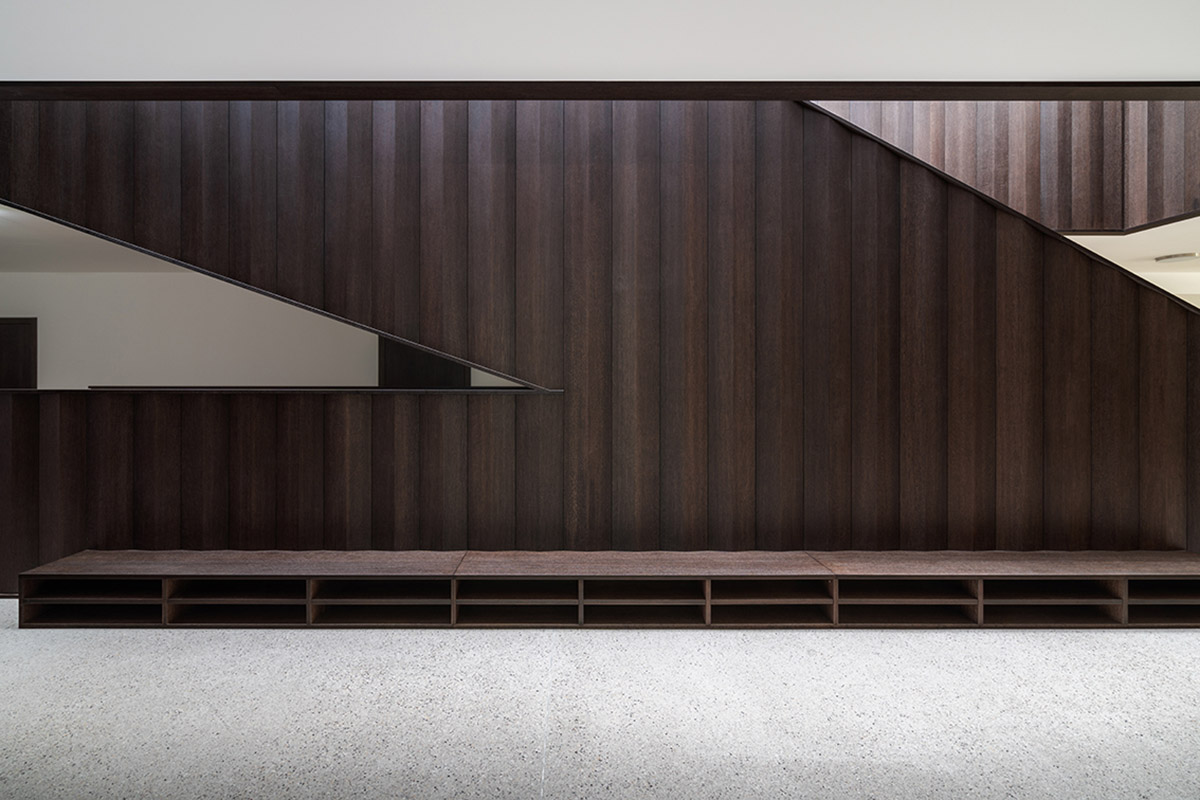 The monumentality of the external facades is contrasted by a strong search for familiarity in the interior, which draws on the collective memory for the historical sites of the city.

The large entrance foyer and distribution spaces appear as generous and welcoming living rooms for the city, within which one finds one's bearings thanks to openings and views characterized by upholstery of precious light grey marble. Inviting armchairs in padded fabric are strategically placed near the service areas and the filter spaces, which are entirely covered with neutral-coloured wallpaper that evoke the tapestries that adorn the rooms of the Bishop's Palace in Bressanone. 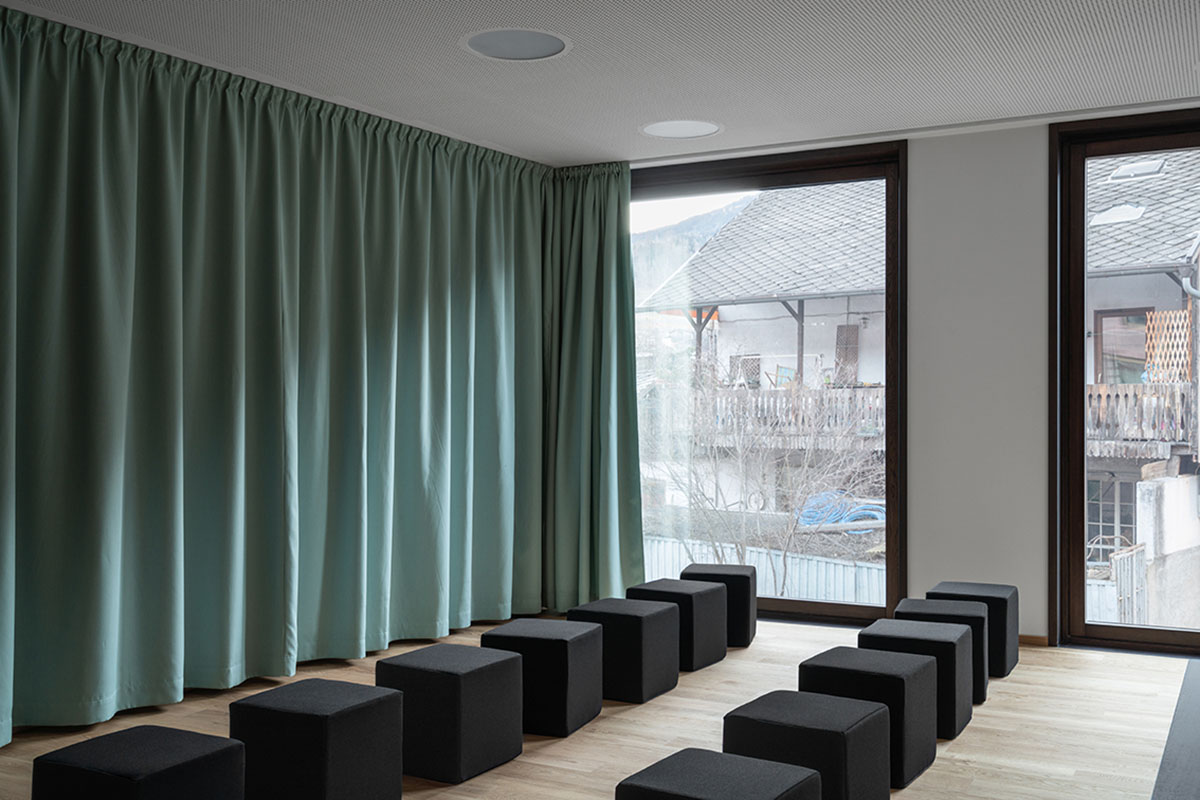 The vertical distribution elements and the furnishings integrated into the building, made of dark-stained oak wood, recall the carpentry works of the buildings in the historic centre of the city.

The abundant natural light, vertical or zenith depending on the situation, filters through curled curtains, with sound-absorbing characteristics, in soft pastel colours.

As the studio explains, the project was built with a very limited budget, the project does not sacrifice formal experimentation. 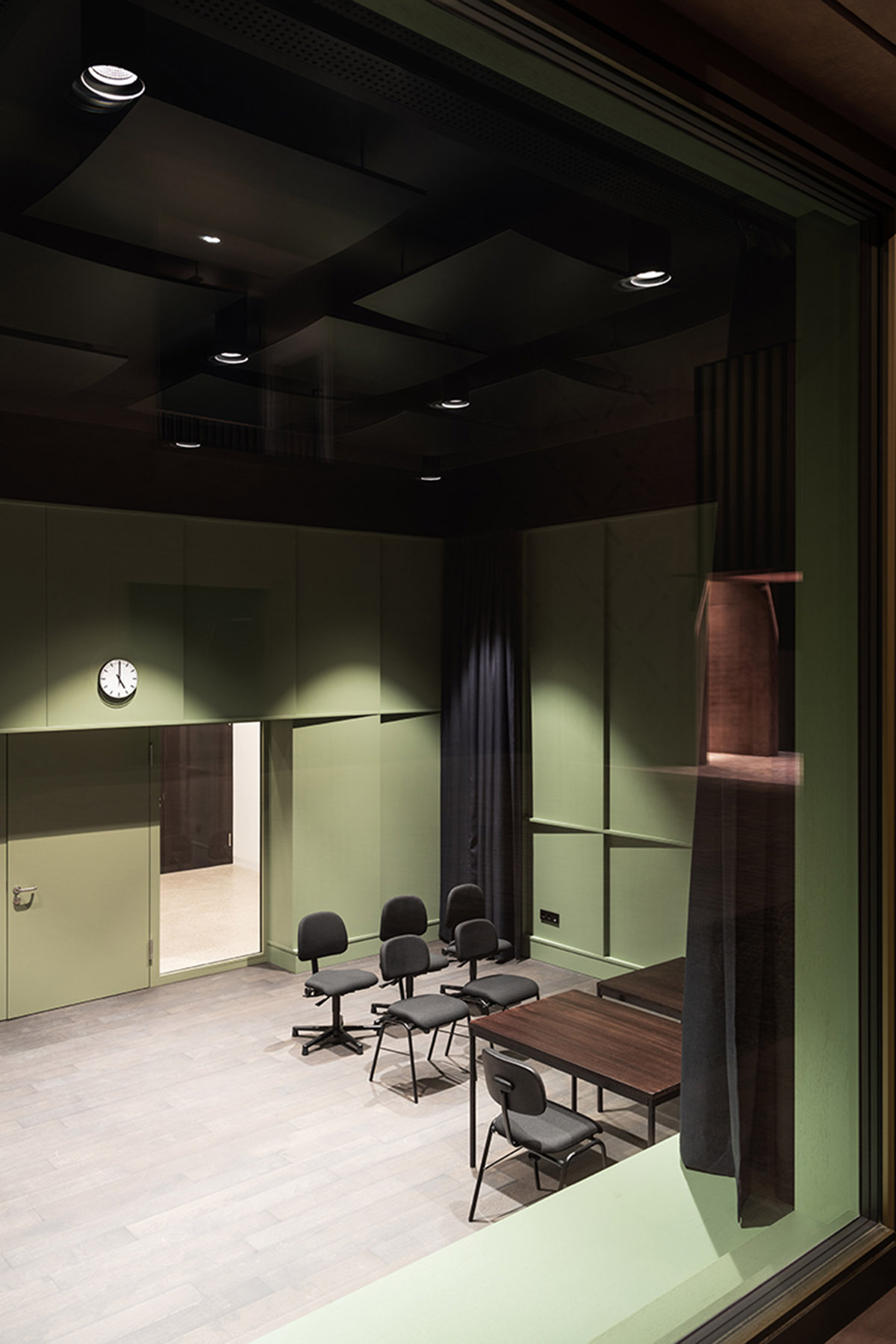 "With carefully selected elements, authentic materials and a simple construction system, the studio has created a product of great technical and aesthetic quality, which respects the tradition and materials of the area," the firm continued.

The school was entirely made of exposed reinforced concrete, the building, devoid of coatings, presents a surprising correspondence between structure and architecture. 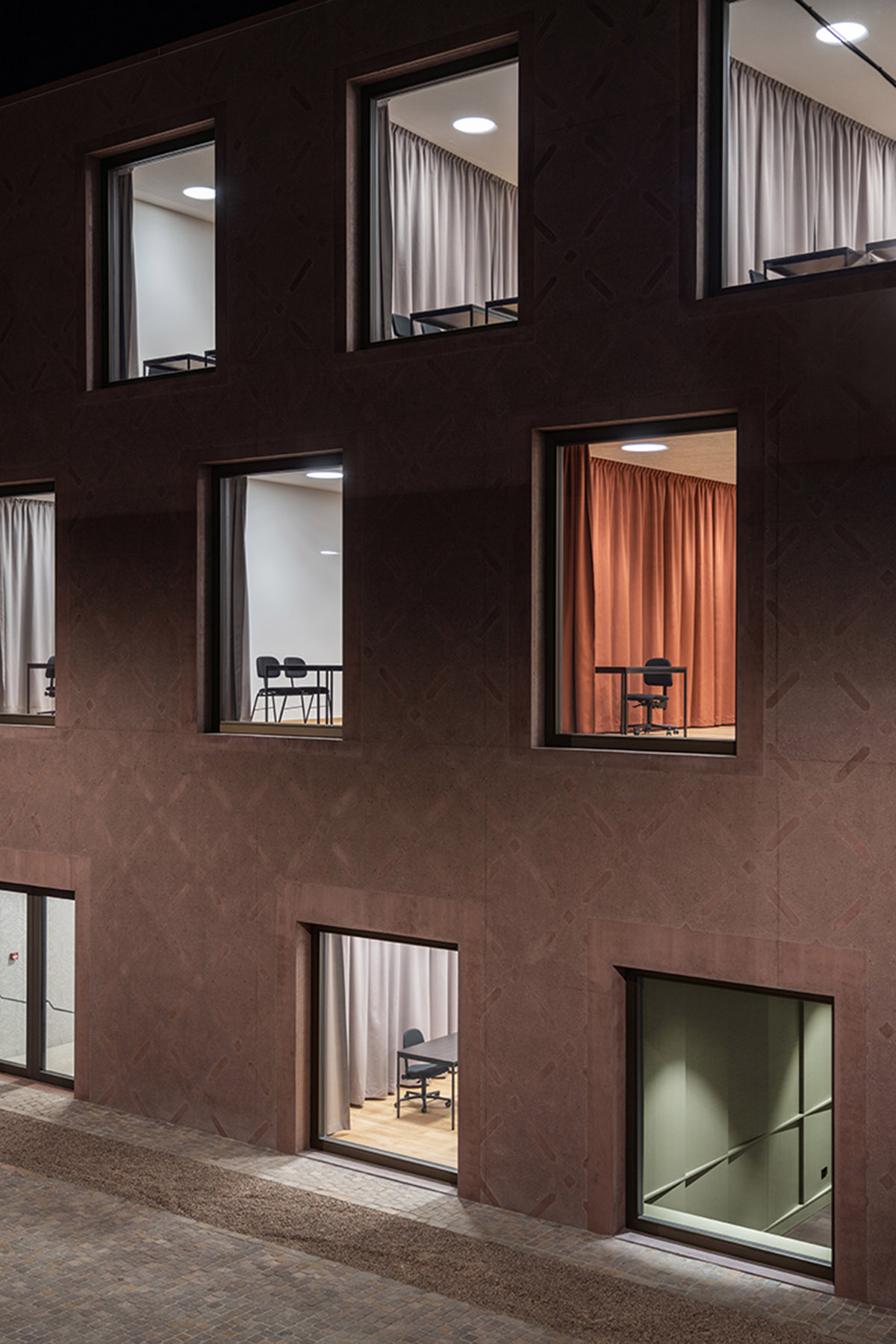 By adding red porphyry aggregates and pigments (red at 3% and black at 2.5%) to the concrete, the complex achieves a colour and texture that blends superbly with the customs and traditional materials. 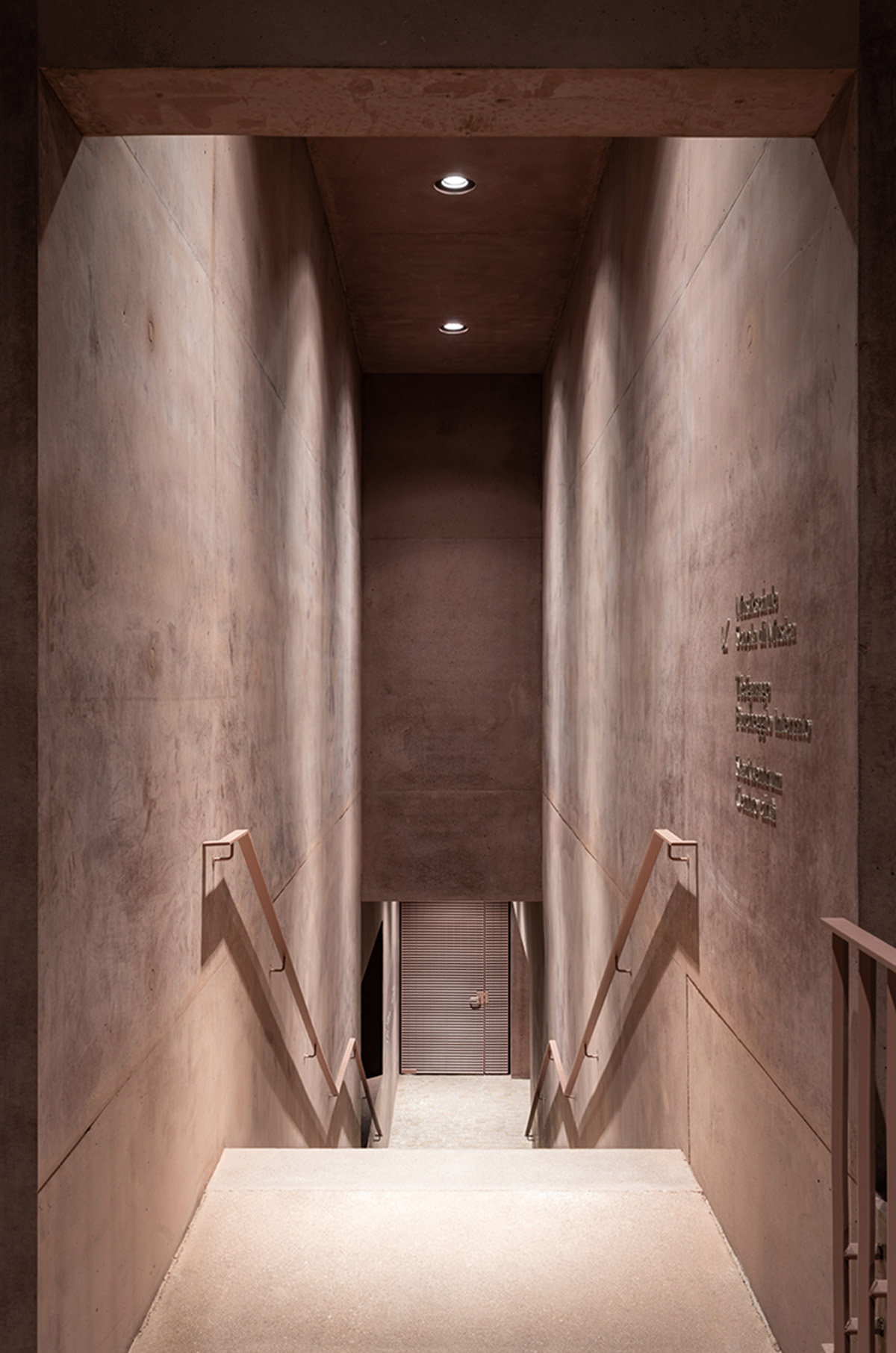 The only treatment given to the surfaces to make them vibrate in natural light is the manual bush-hammering of the whole building, except for the frames coinciding with the openings and for the courtyard, entirely hammered by hand with a motif taken from the typical local textures.

A finish of great simplicity, it reinterprets the precious decorations that dot the heart of the city in a contemporary key. 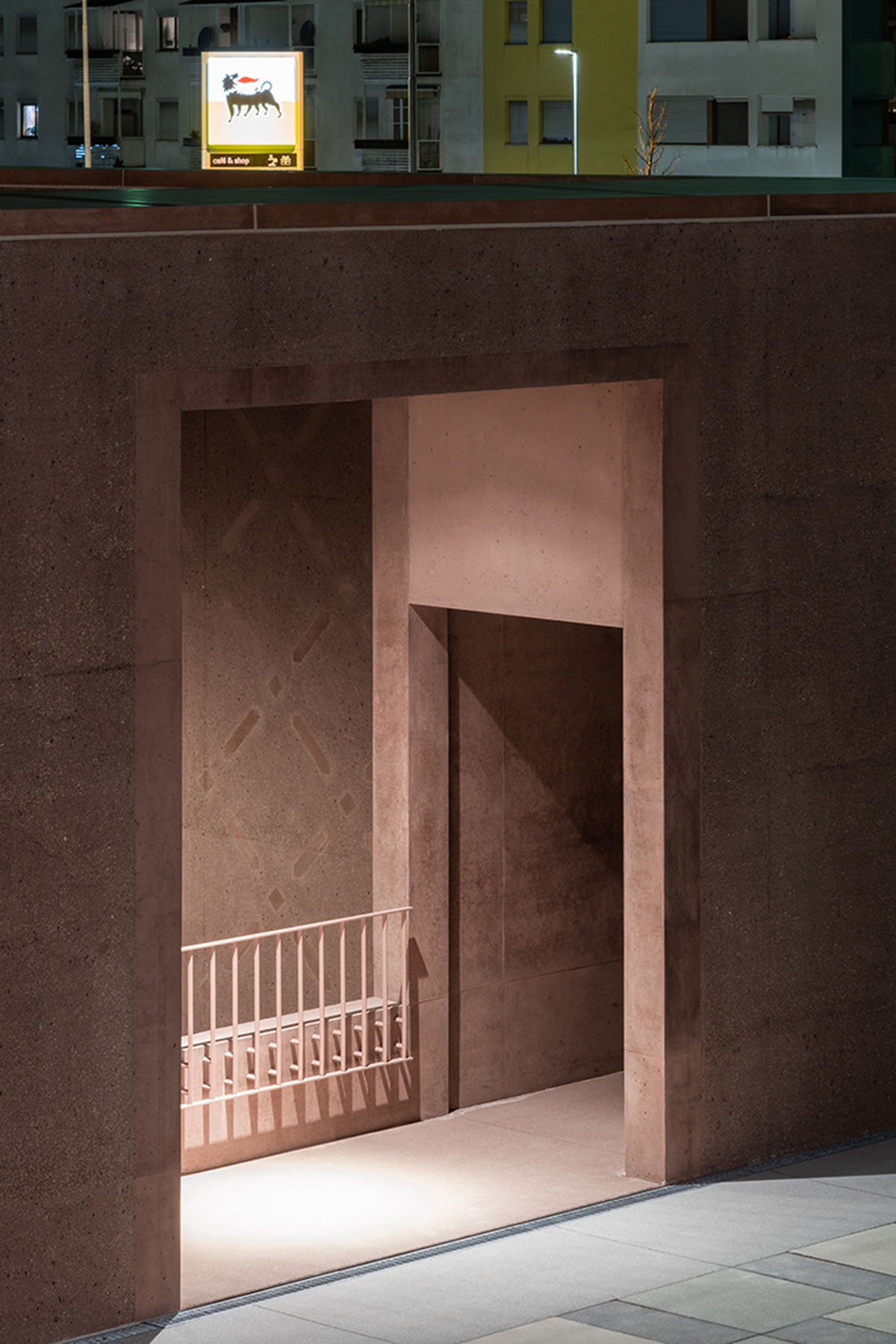 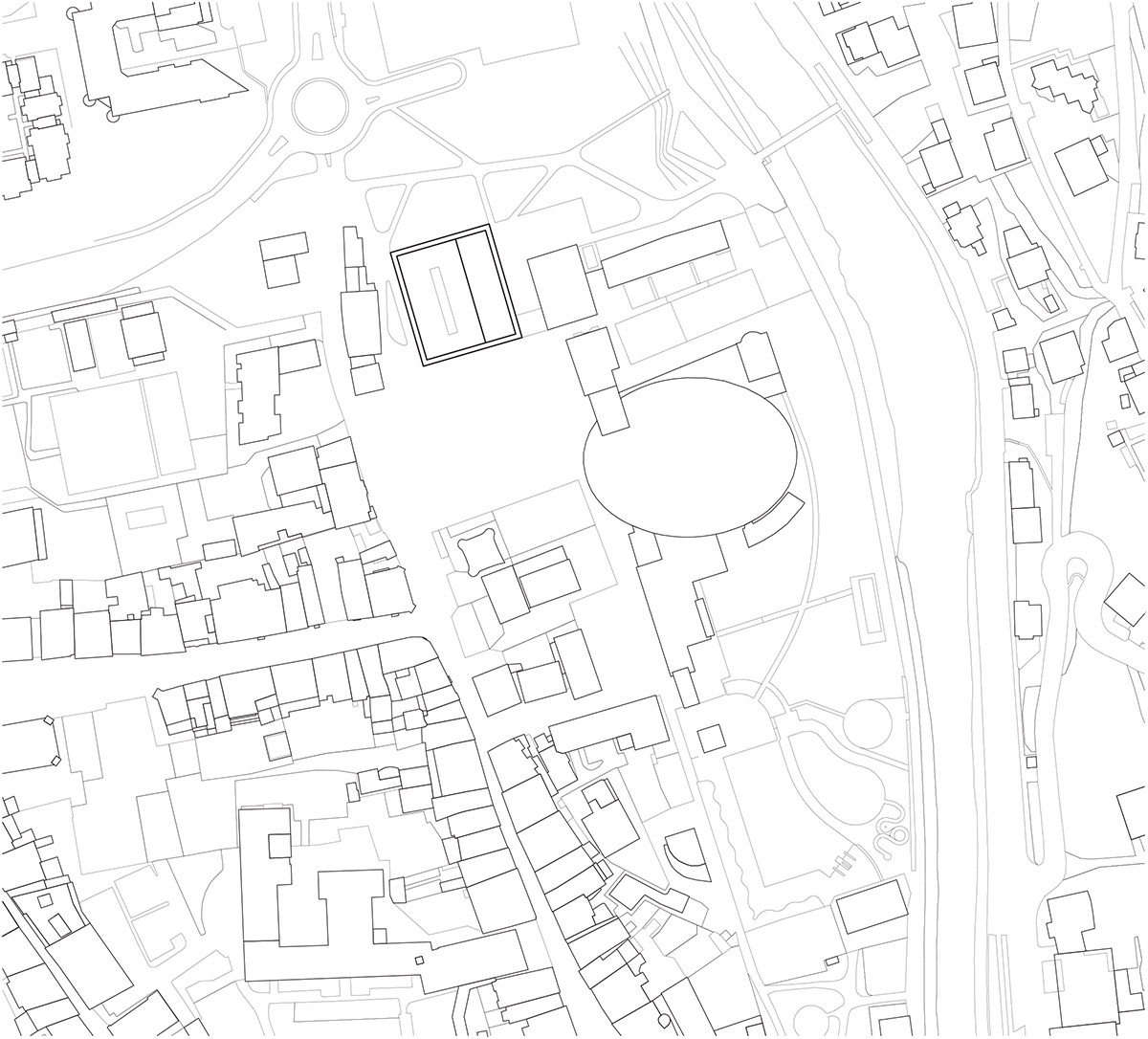 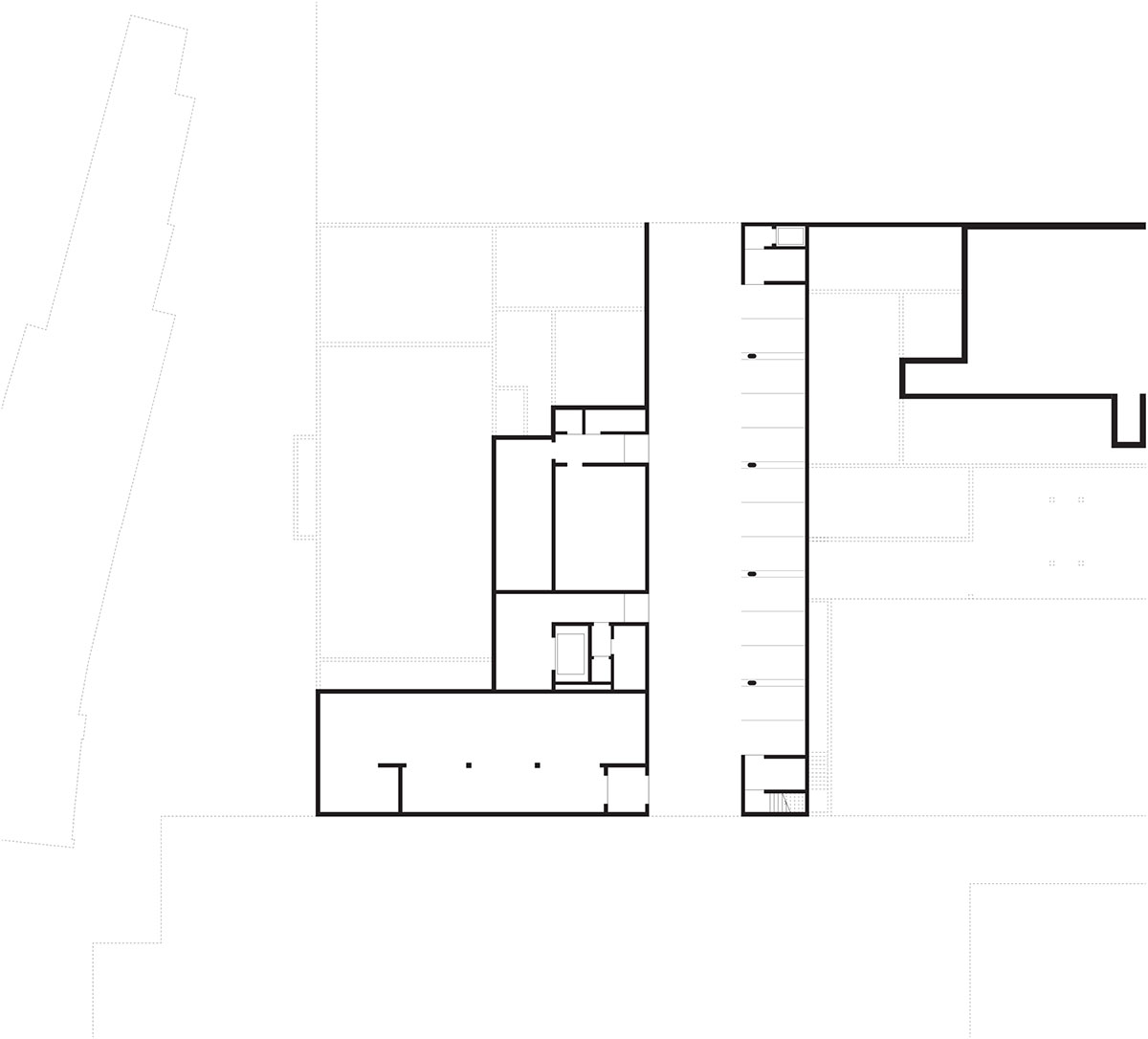 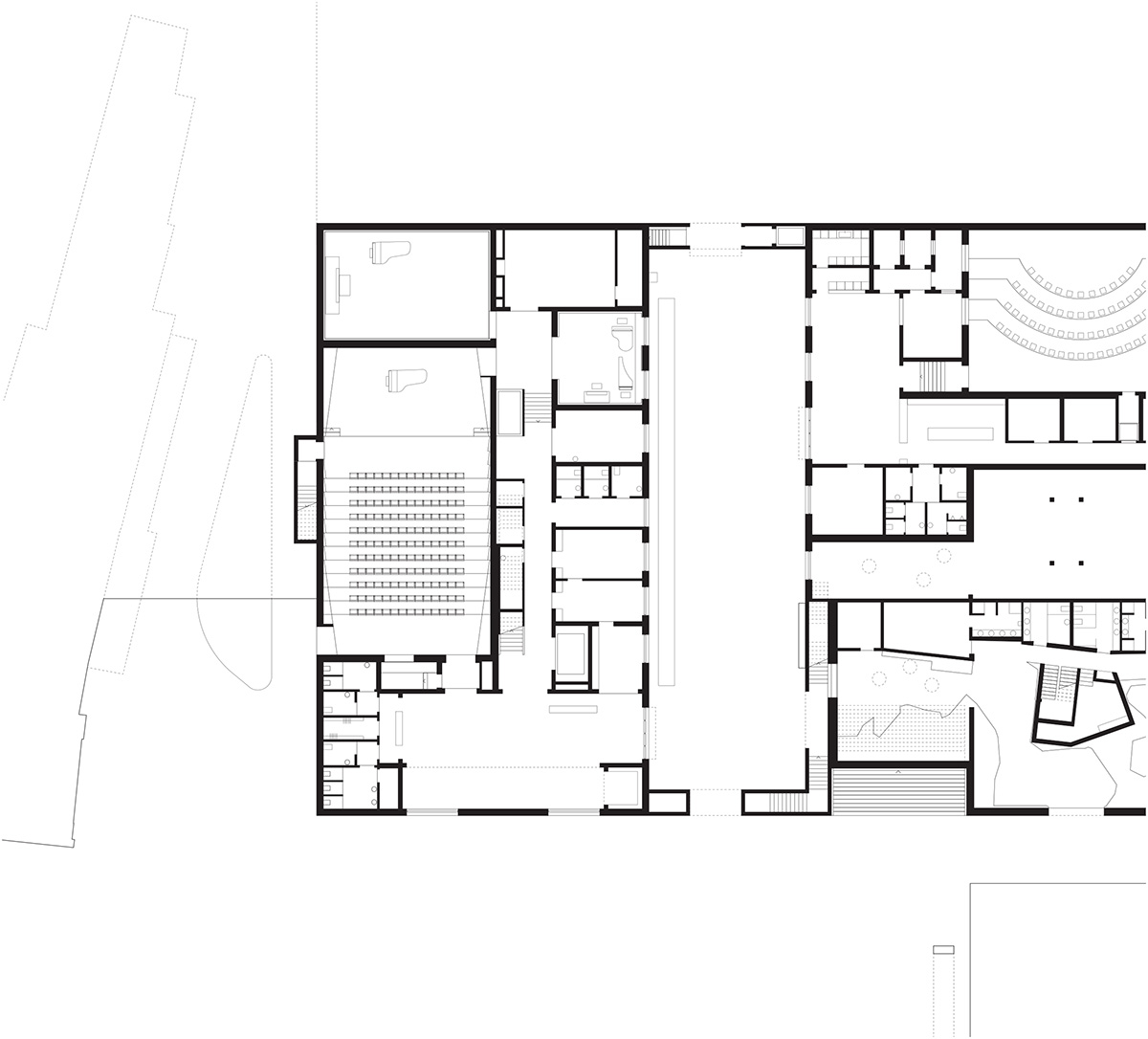 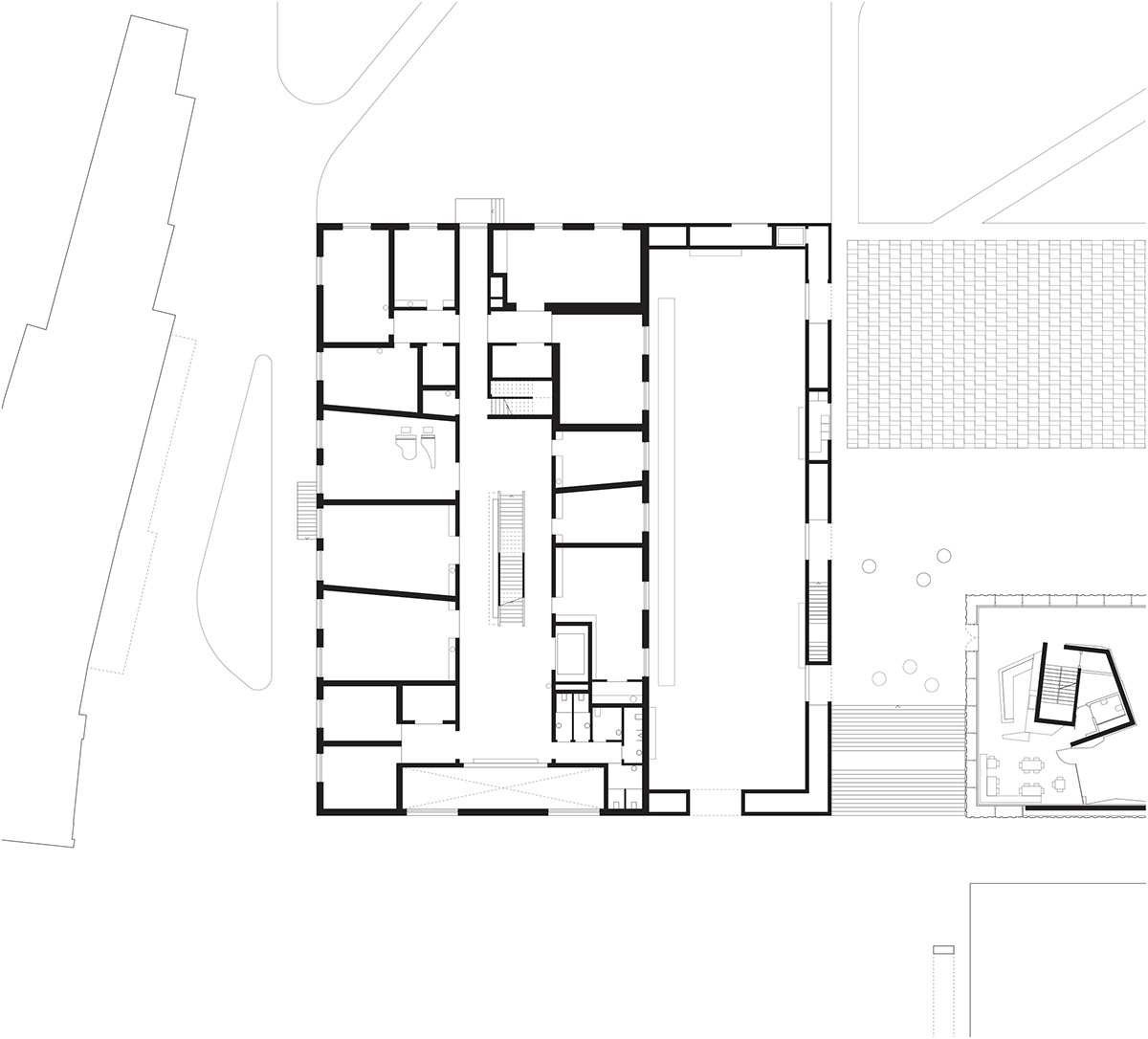 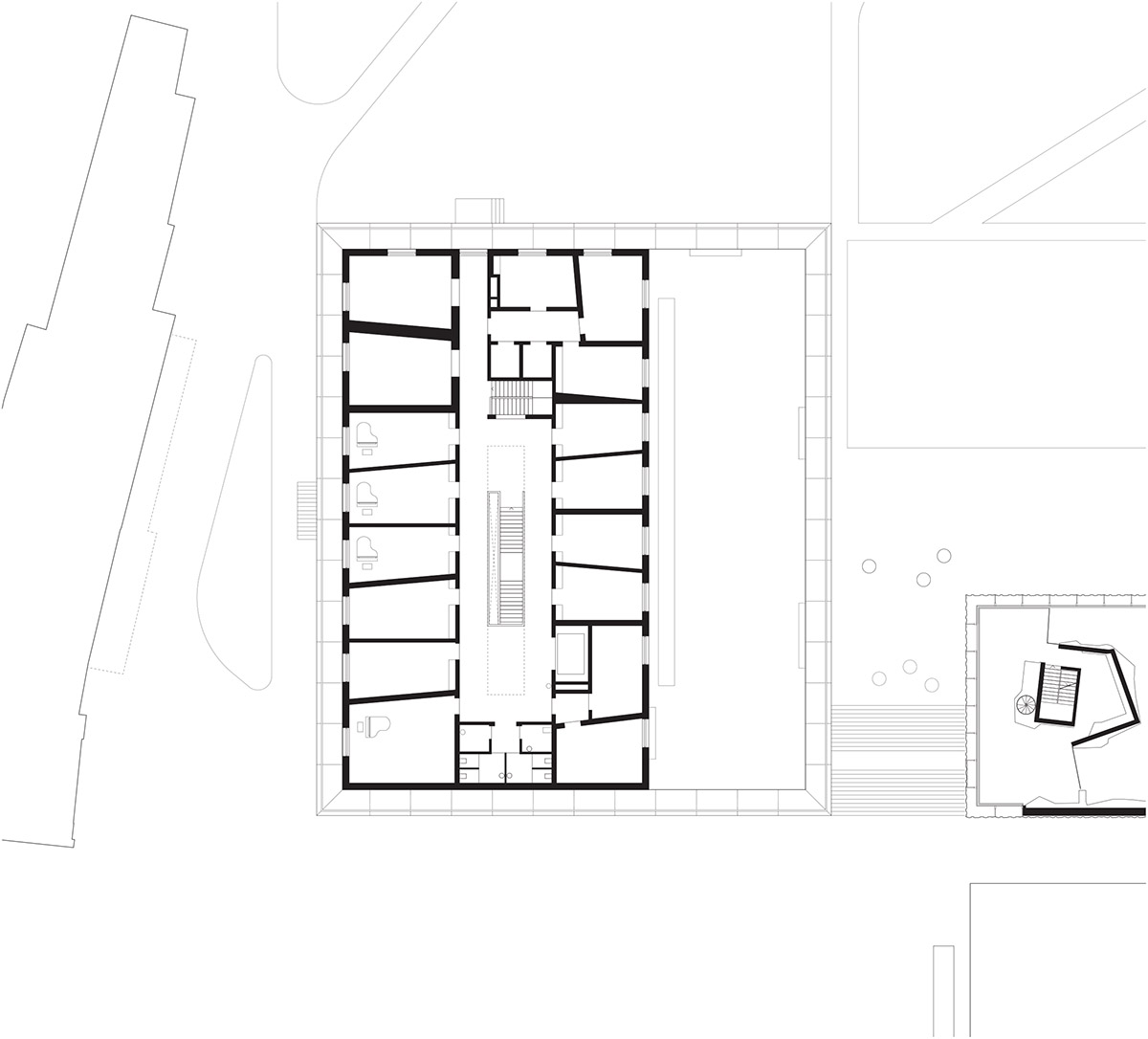 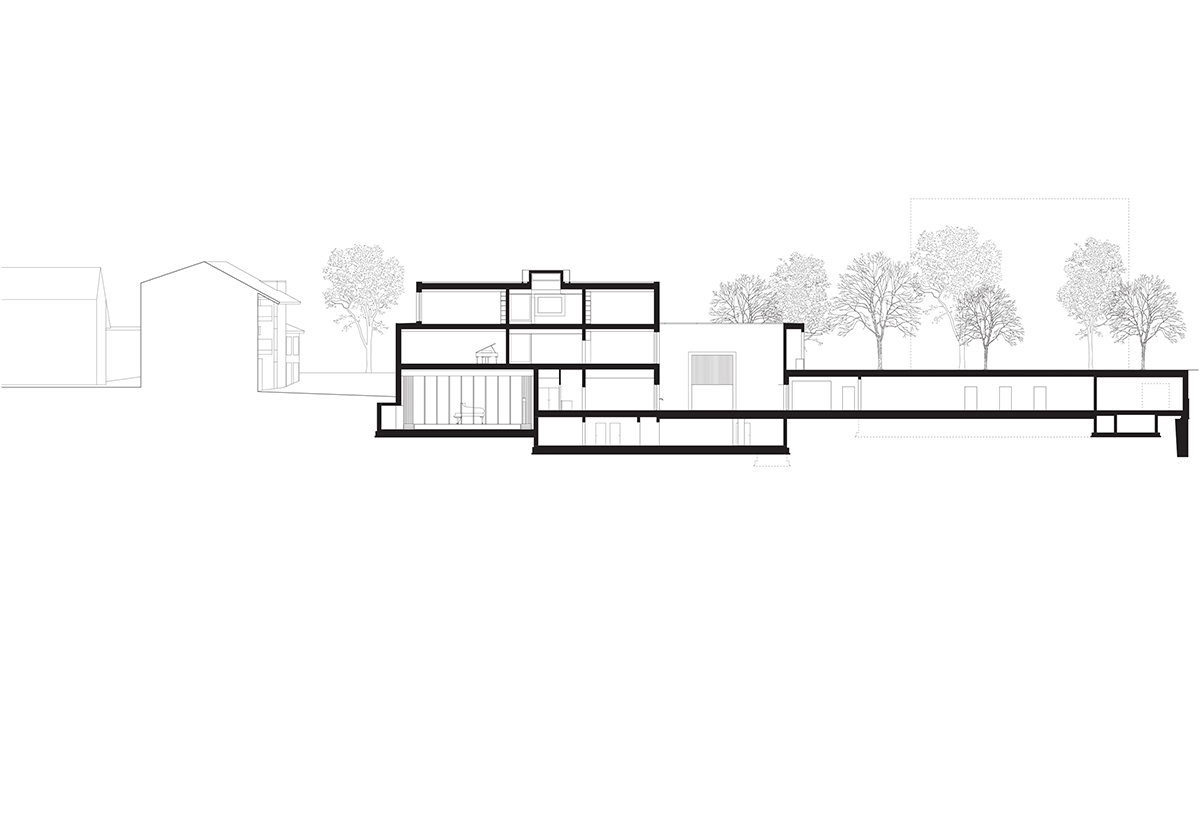 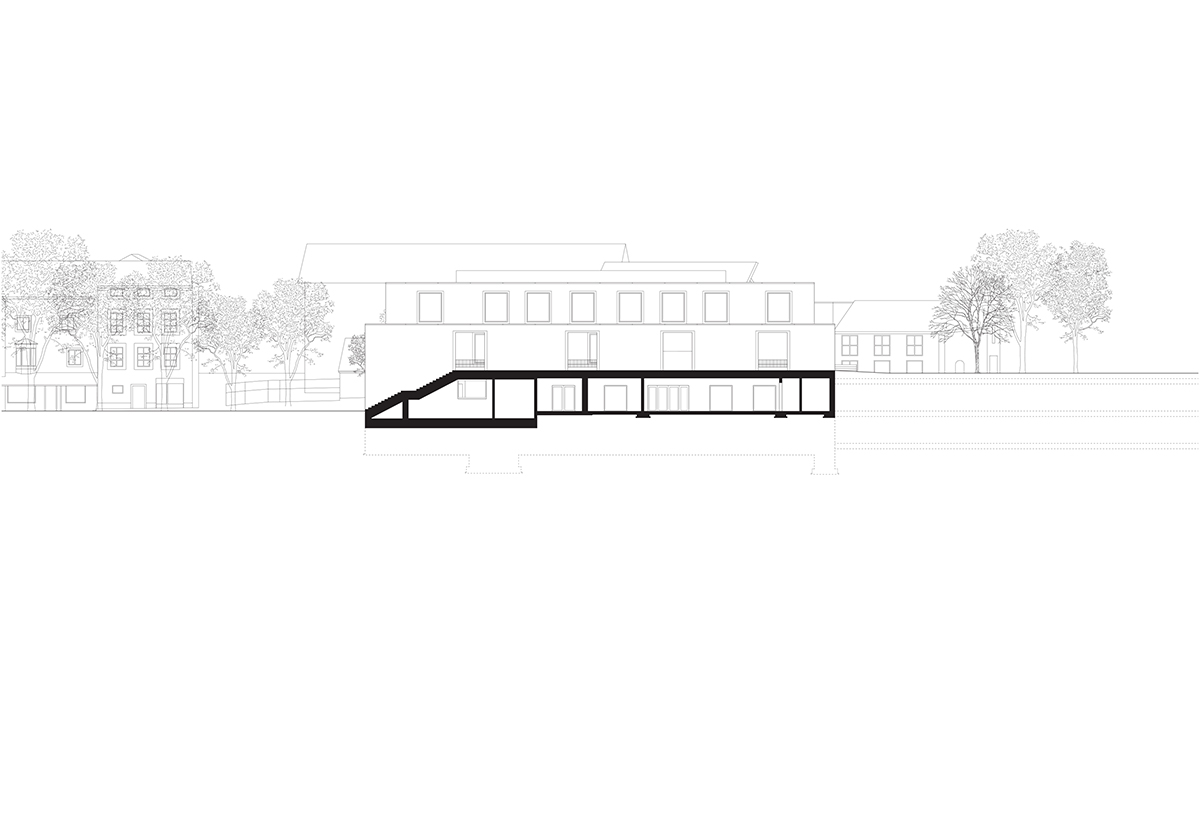 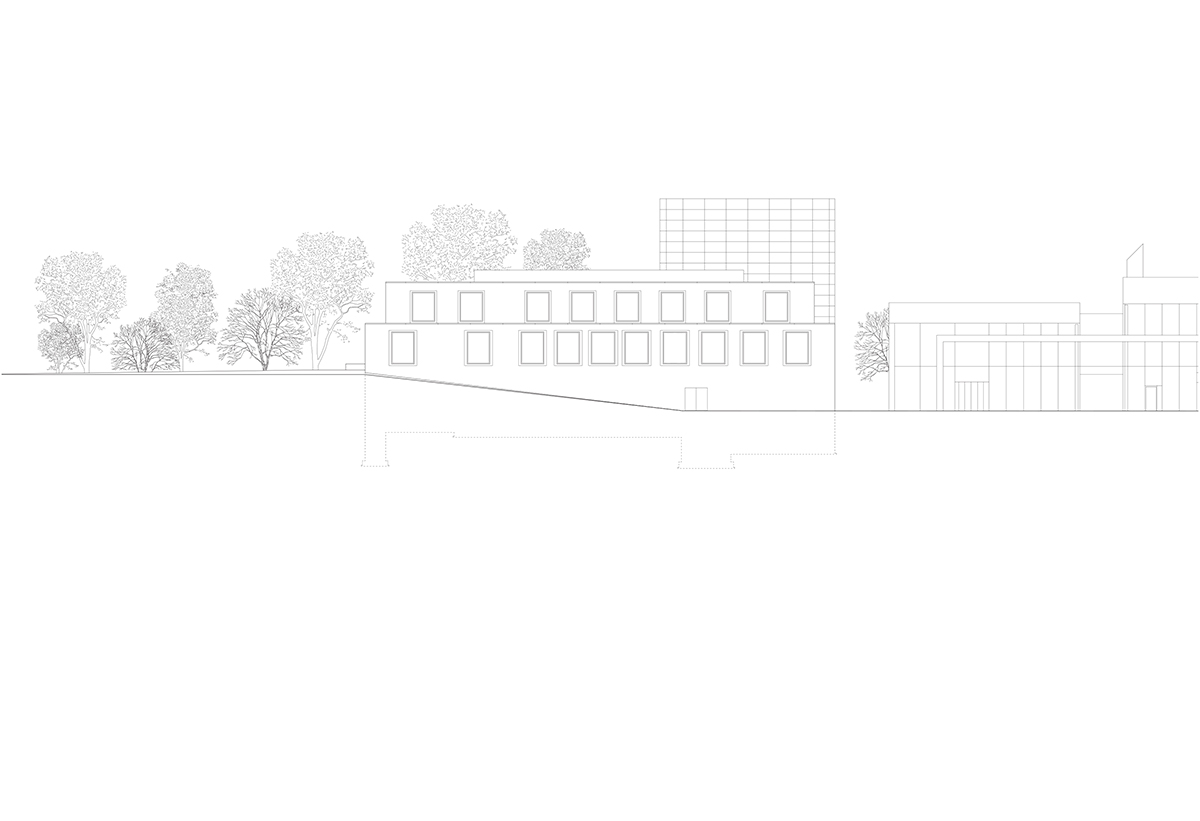 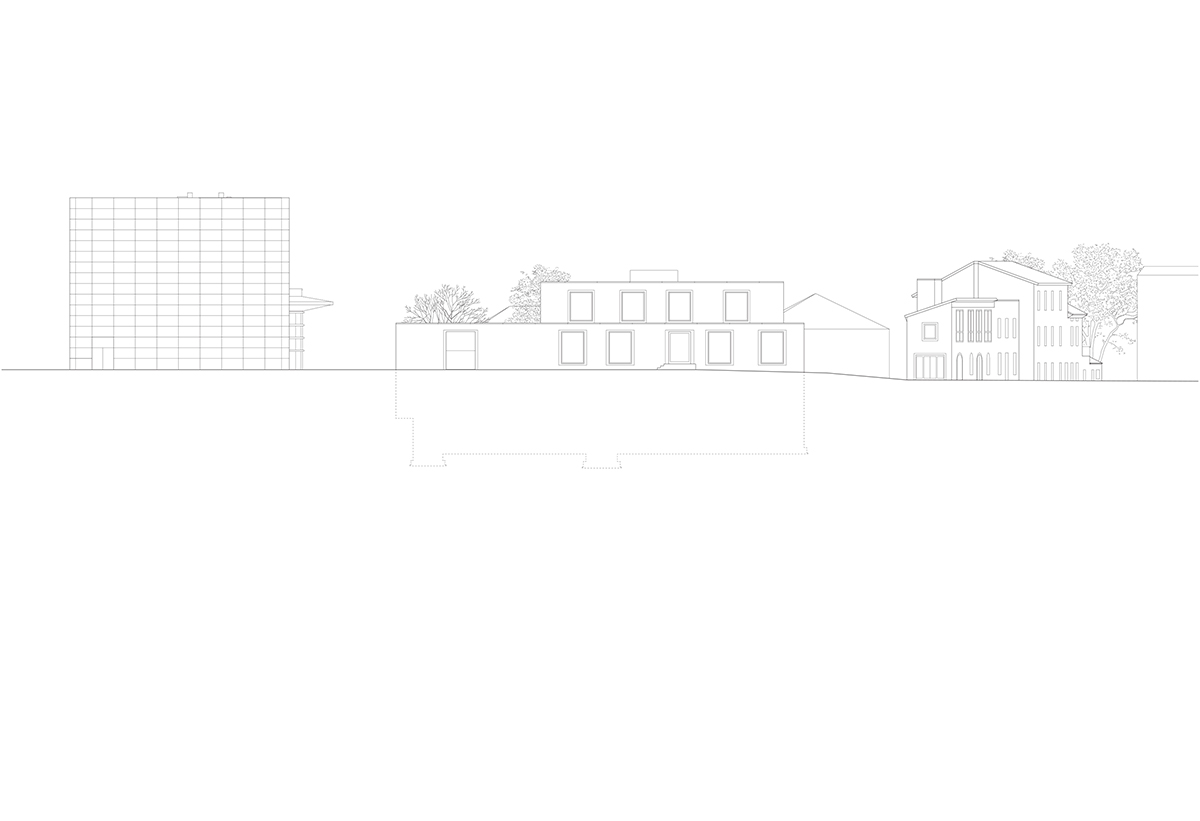 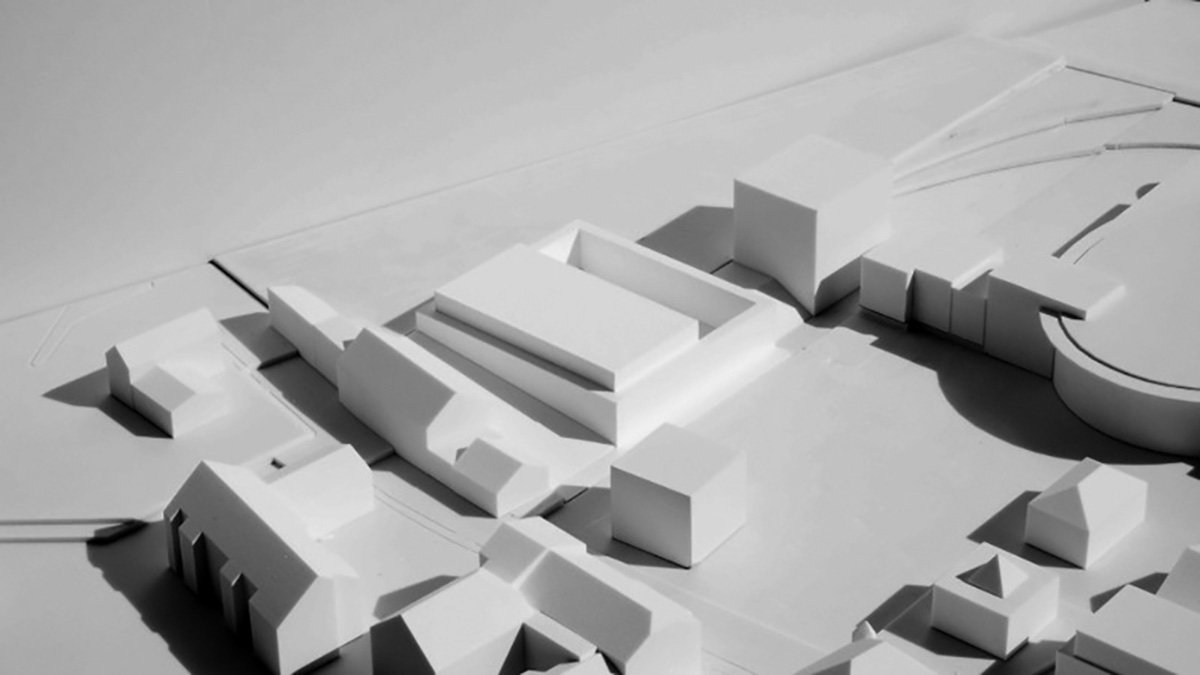