A new exhibition, titled Jinyun Quarries – The Quarry as Stage, will explore the transformation of nine Chinese abandoned quarries into new uses in the northern part of Jinyun County in Zhejiang Province, China.

Set to be opened at Berlin's Aedes Architecture Forum on 19 March, 2022, Jinyun Quarries – The Quarry as Stage exhibition will tell the narrative of the projects designed by Beijing-based architecture studio DnA_Design and Architecture, led by Xu Tiantian.

Jinyun Quarries – The Quarry as Stage will be on view from 19 March to 5 May 2022 at Aedes Architecture Forum in Berlin, Germany.

As a whole, the exhibition will focus "on reconciliation with nature," according to a description by Aedes. For this reason, the organizers adopted a respectful approach was also taken when creating the exhibition. 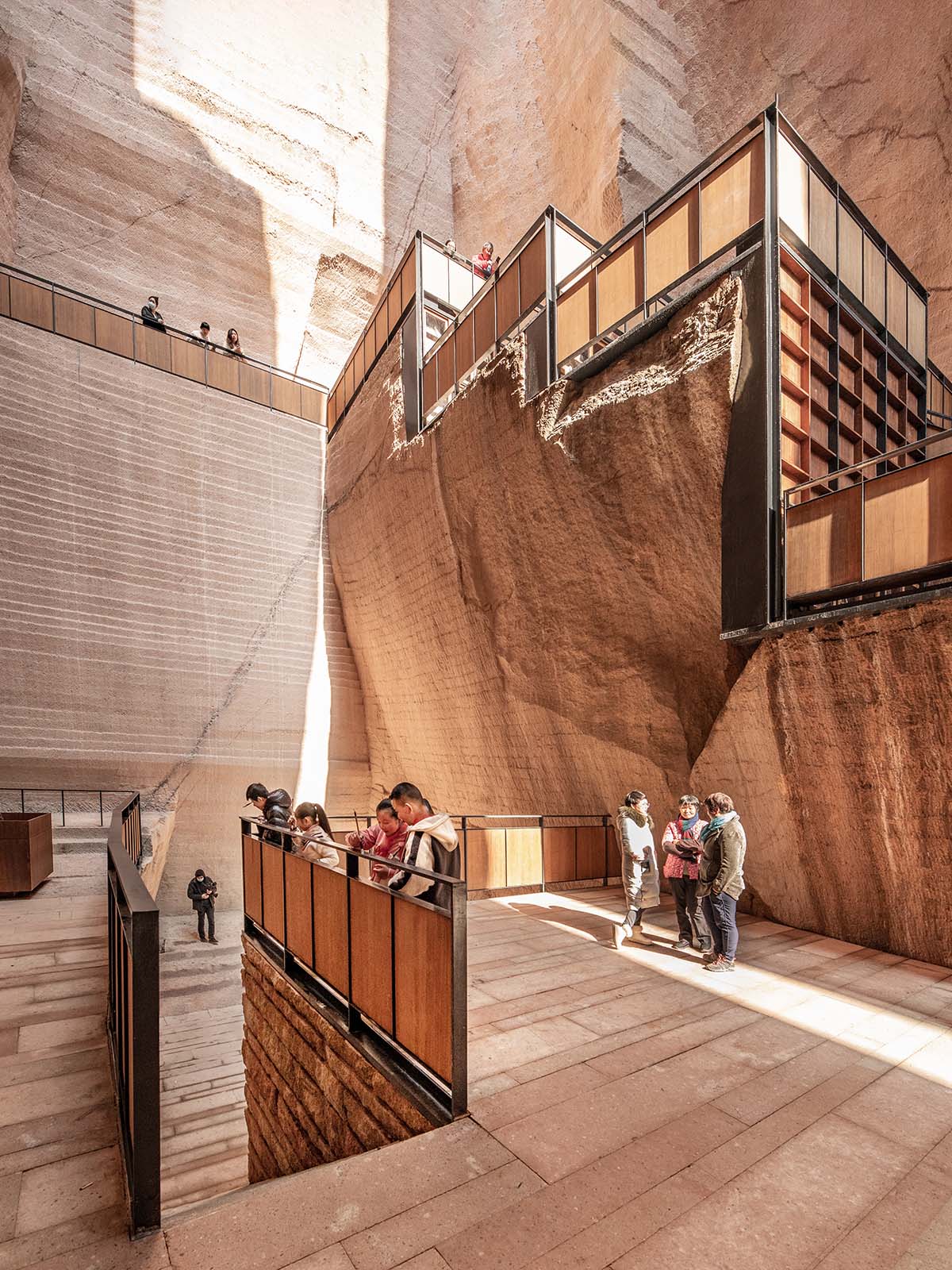 The mountainous landscape of Jinyun County in Zhejiang Province, China, has been shaped by the manual mining of natural stone. For the rugged and hard-to-access region, the Beijing architect Xu Tiantian and her team were asked to develop strategies for new uses for nine of the over 3000 small, abandoned quarries. 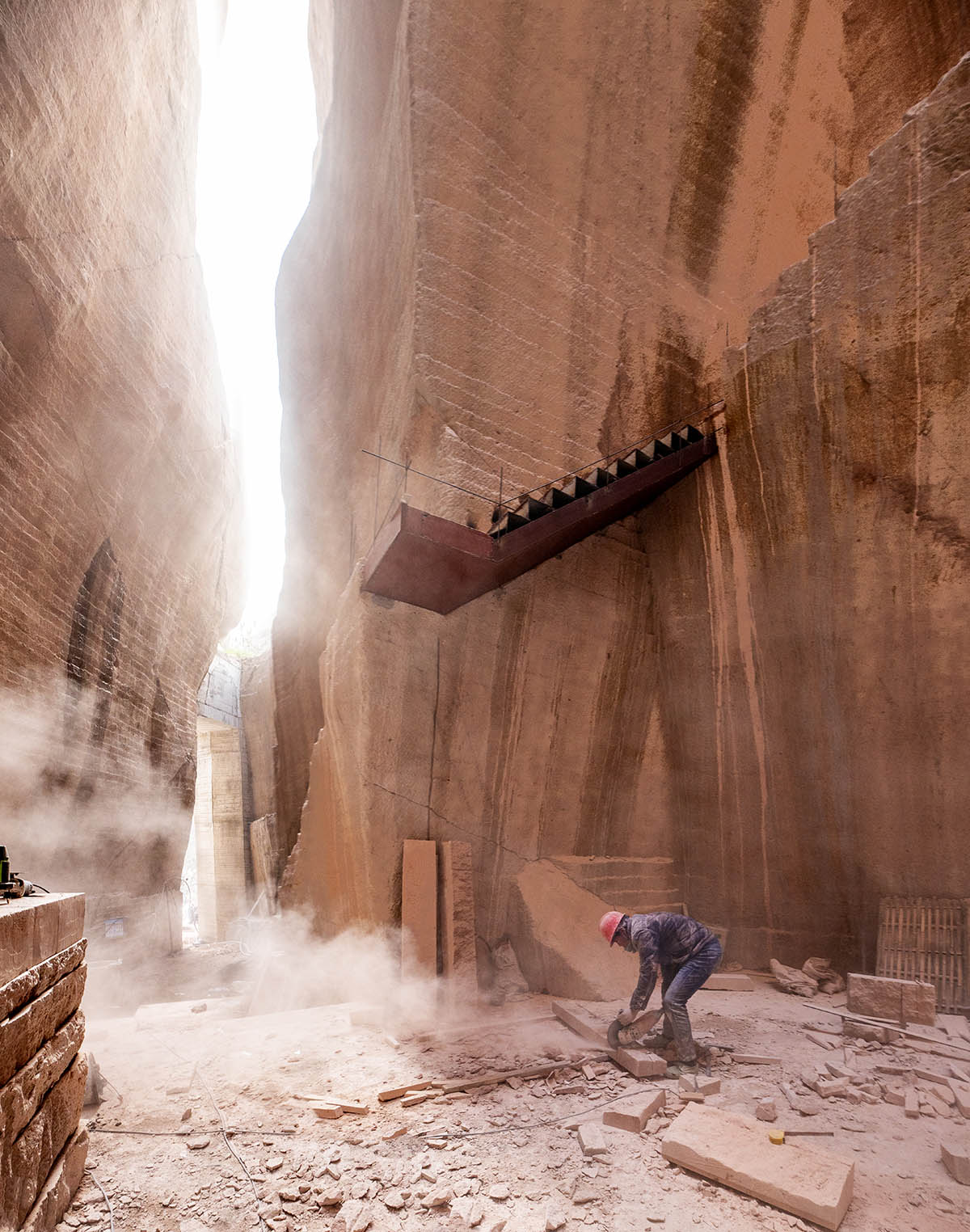 The transformed quarries now provide a stage for cultural and social activities, and simultaneously strive for ecological improvements and create new economic perspectives for the rural population.

DnA_Design and Architecture repurposed the pits and provided new functions, which have become part of a public infrastructure that puts historical aspects extending back over a thousand years as well as the everyday culture heritage in a new context. 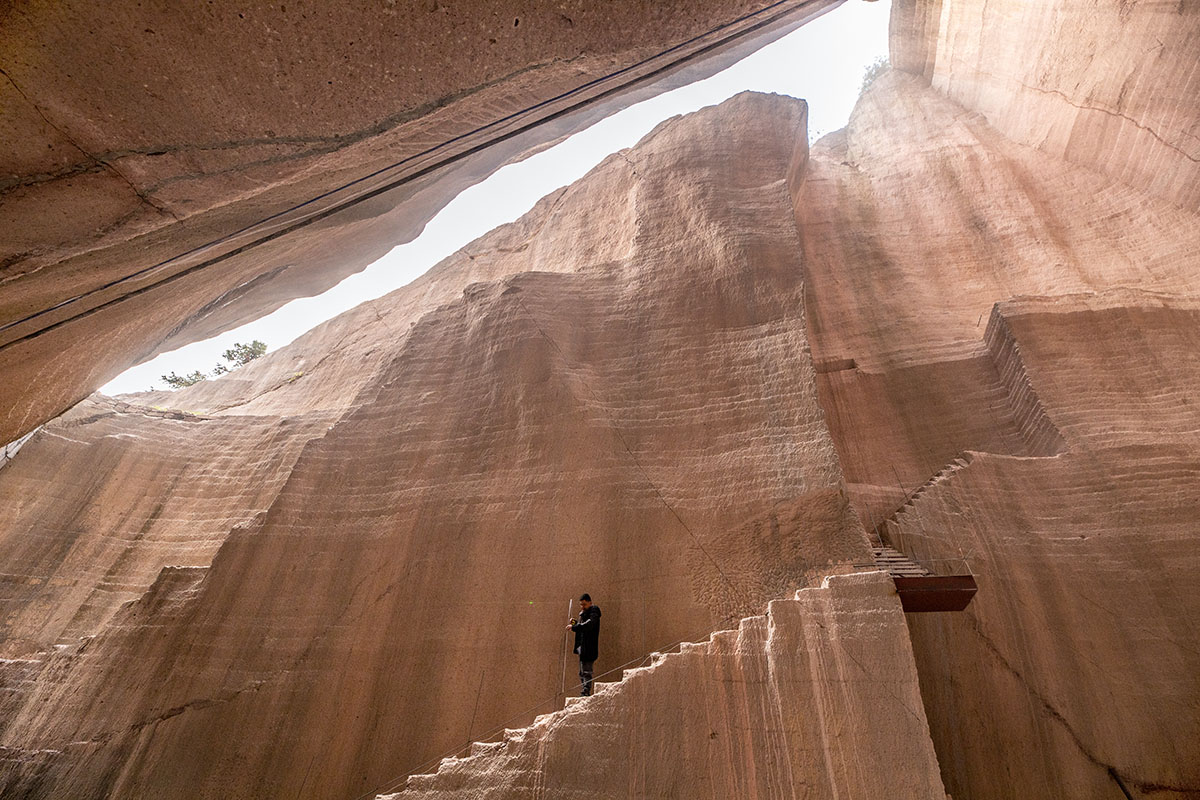 Reaching the Aedes Architecture Forum from Beijing by the most sustainable means of transport possible, namely by train, the exhibition will communicate the breath-taking sense of space in the stone quarries of Jinyun in a large-scale installation.

The exhibition will present spacious, translucent models, photos, plans, and films visualizing the complex structure of the spaces carved into the rock. 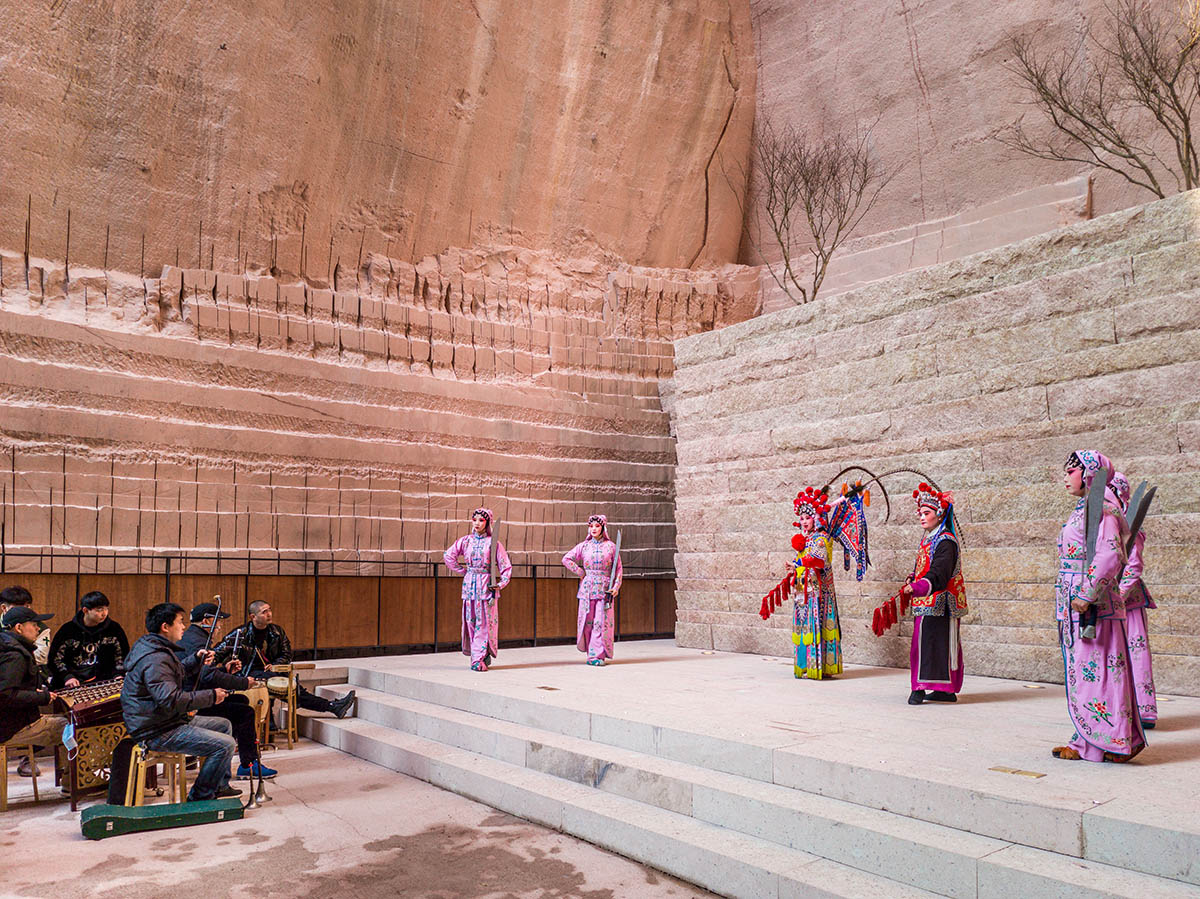 In 2021, the Beijing architect Xu Tiantian and her firm DnA_Design and Architecture were awarded a commission to develop new utilization concepts for the old and today abandoned stone quarries in the northern part of Jinyun County in Zhejiang Province.

Located in direct proximity to Songyang, where Xu Tiantian has already very successfully realized revitalization projects for the rural area, which have received close international attention, are over 3000 disused small stone quarries that, until recently, were still mined manually.

The nine stone quarries that have been worked on by Xu Tiantian and her team since then are located in a valley named Xiandu with an impressive natural landscape and bizarre volcanic rock formations that is already a tourist attraction today. 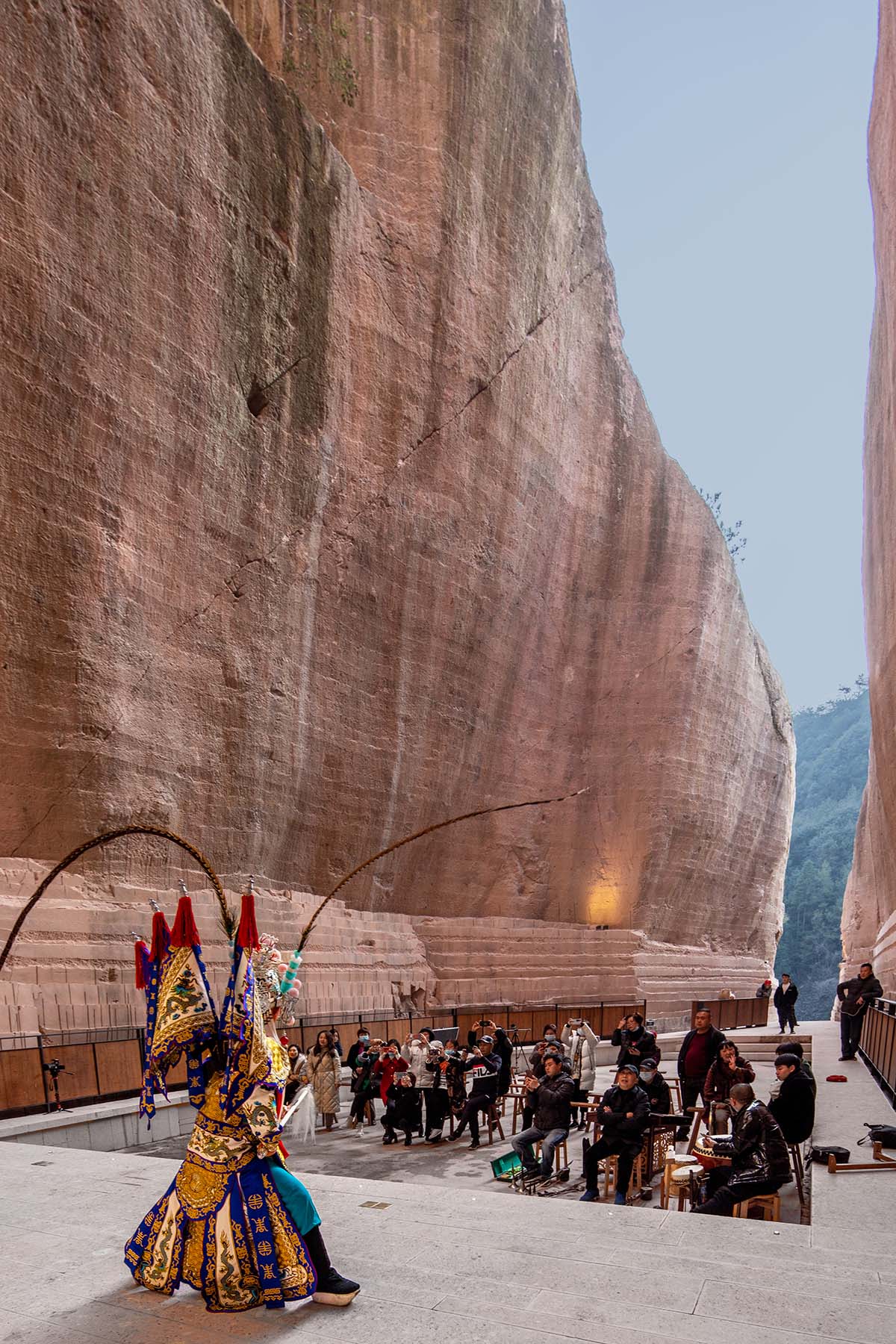 "The project strives for ecological improvements"

To support the development of the region with the measures, the project strives for ecological improvements, while simultaneously creating social and cultural locations to be used by both the local population and visitors.

The converted stone quarries have been given a new use which now became part of a public infrastructure, that puts historical aspects going back over a thousand years as well as the everyday cultural heritage in a new context. 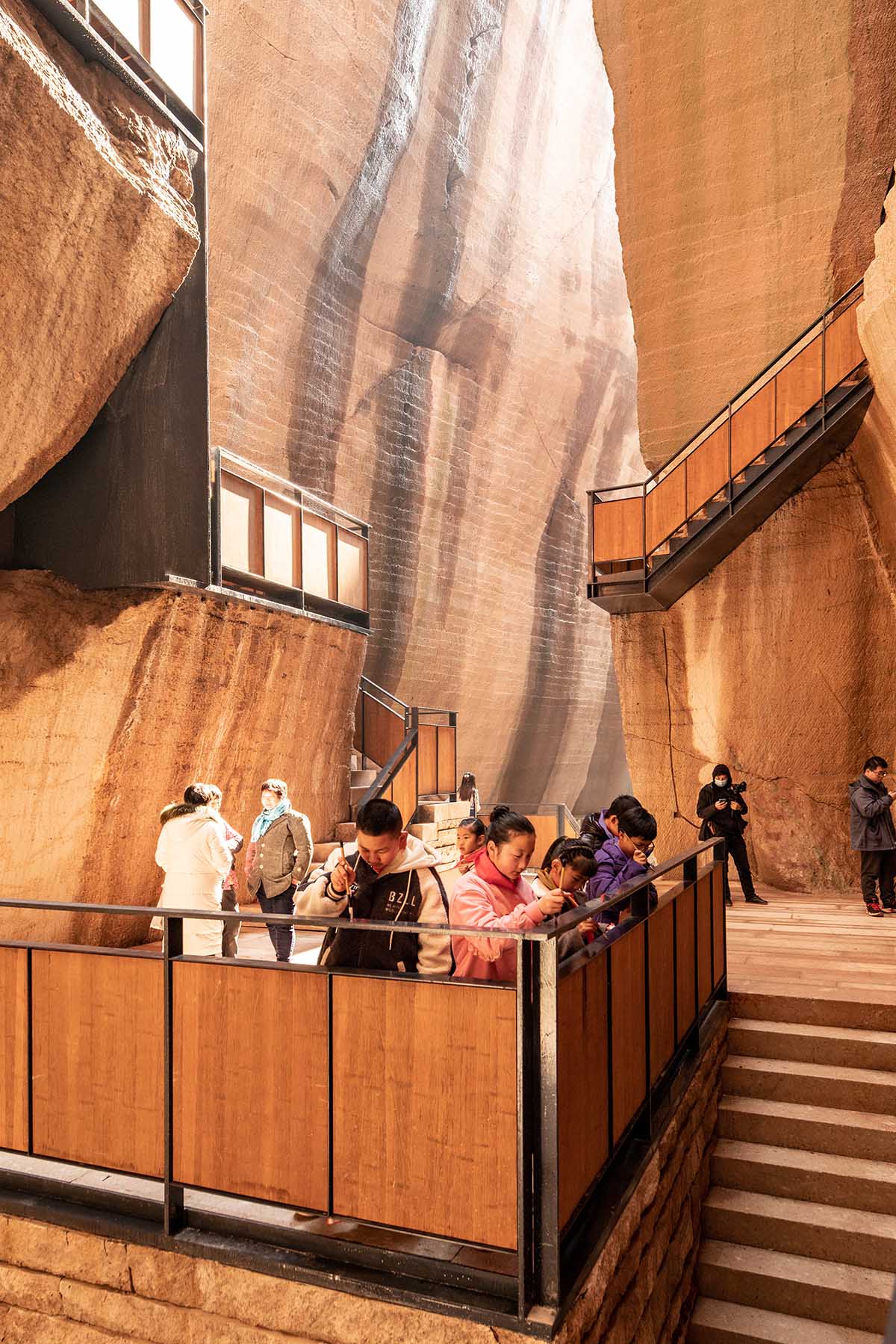 The Transformation of the Quarry Landscape of Jinyun

The landscape of steep mountains and narrow valleys in Jinyun County today was shaped by the small-scale exploitation of local stone quarries that were in operation for decades and thus led to considerable interventions in the natural landscape. With the Xiandu Scenic Area, the region already attracts many tourists today.

The temple for the legendary Yellow Emperor (Huangdi), who has already been honoured for over 3000 years as the founder of the Chinese nation, has an impact far beyond the region. According to the legend, he ascended the local Dinghu Mountain into the heavens on a dragon after achieving immortality. The temple, which was destroyed in the Ming dynasty (1368–1644), was reconstructed in 1994 and has regularly been used since then for commemoration ceremonies, and was admitted to the National List of Immaterial Cultural Heritage in 2011.

Moreover, in natural and artificially created caves, there are 125 important stone calligraphies, the oldest of which comes from the Tang dynasty (617–907), which have been listed as national cultural heritage since 2001. 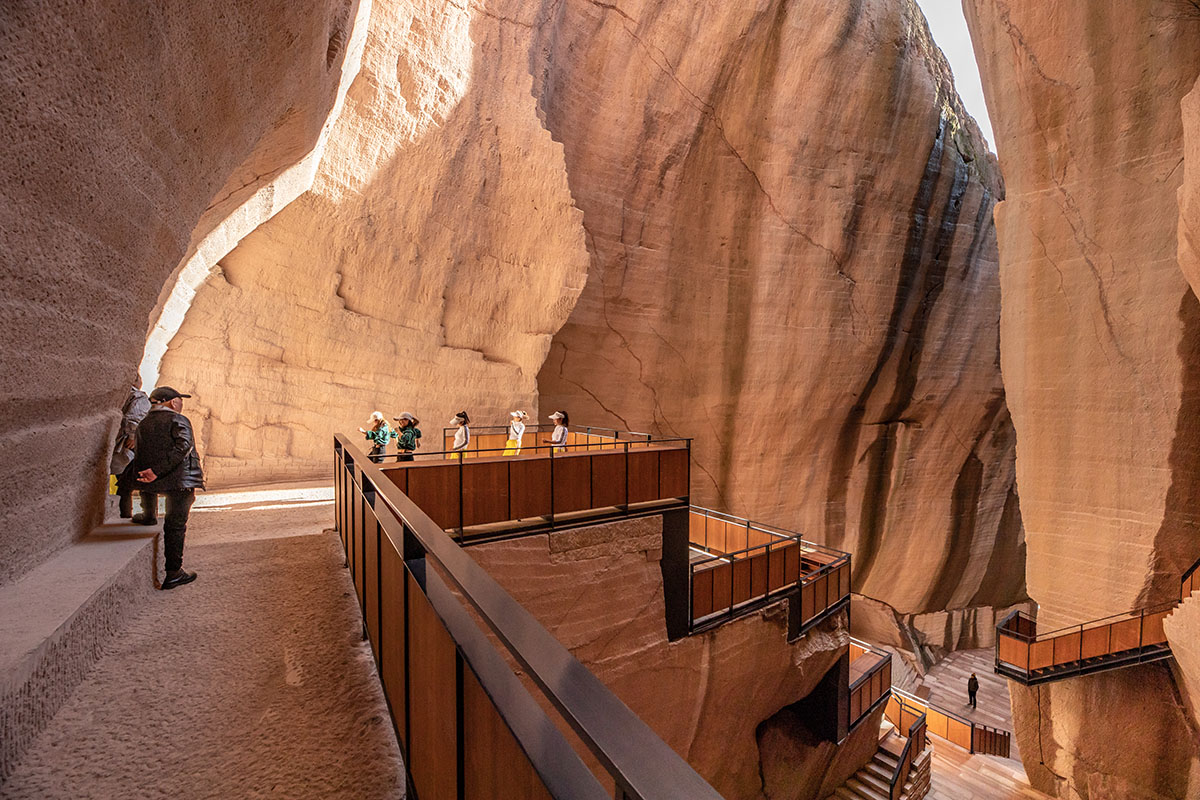 Jinyun County is located in the southern centre of Zhejiang Province. Nearly 80 per cent of the region is covered by forest, thus making agricultural production on the rocky substrate difficult due to the scarcity of fertile soil.

The inhabitants therefore relied on the hard profession of the stonemason, and until recently carved the material from the rock face manually. In the region, the massive stone blocks were used for the construction of houses, whose height was, however, limited by the heavy weight of the material.

The stone quarries have now been abandoned for some years, are used in part for chicken farming and in part as fish ponds, or have fallen into disrepair. 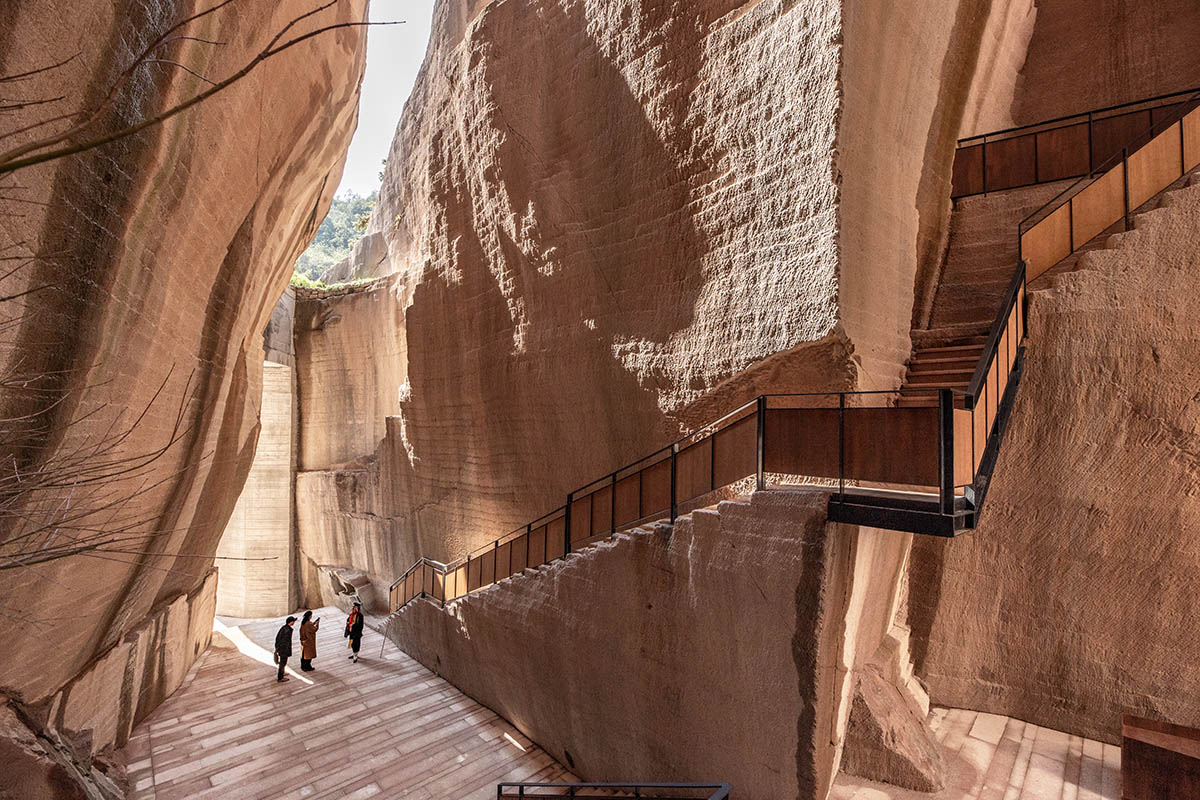 Due to the on-going transformation of society and the socioeconomic challenges, as well as the need for new perspectives to counter the exodus from rural regions, the administration is seeking new possibilities for dealing with the remainders of the archaic mining industry on the one hand, and new sources of income for the population on the other.

In addition, the stone quarries today gape like wounds in the natural landscape and urgently require ecological improvements. 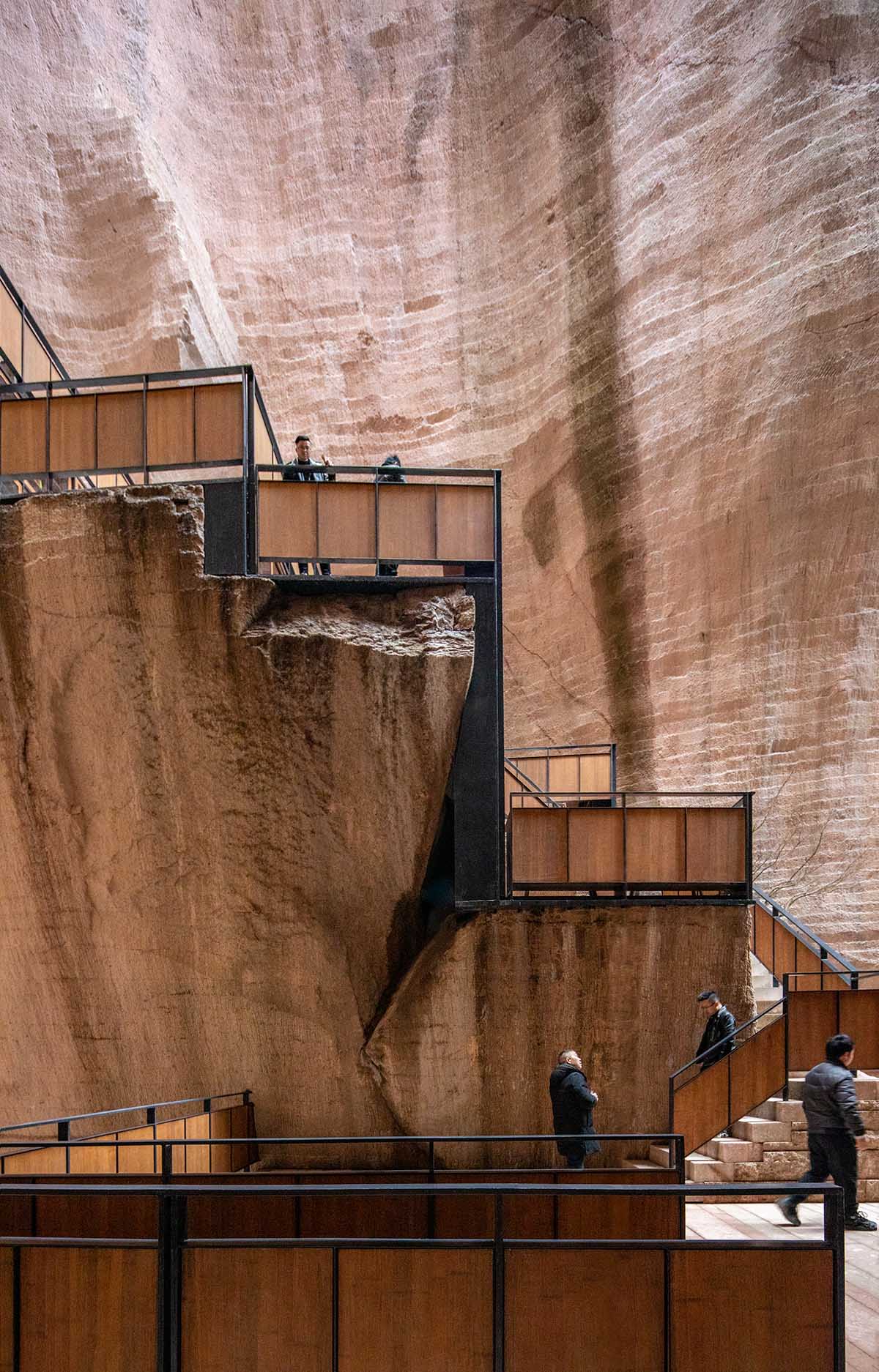 The Projects at the exhibition

The exhibition will present all of the nine former stone quarries that have already been completed for new utilizations as well as those in planning.

The individual locations are each characterized by very individual and random forms cut into the rock, and are connected by a footpath that is routed over stairways due to the differences in elevation.

The stone quarries are situated within a radius of one kilometre and contribute as a pilot project to revitalizing the landscape and the region by means of the smallest-scale interventions possible.

The simple, very careful interventions by the architect contrast with the ‘over-designing’ of rural areas, in the sense of kitschy romanticizing or ‘Disneyfication’, which has become common in many places in China. 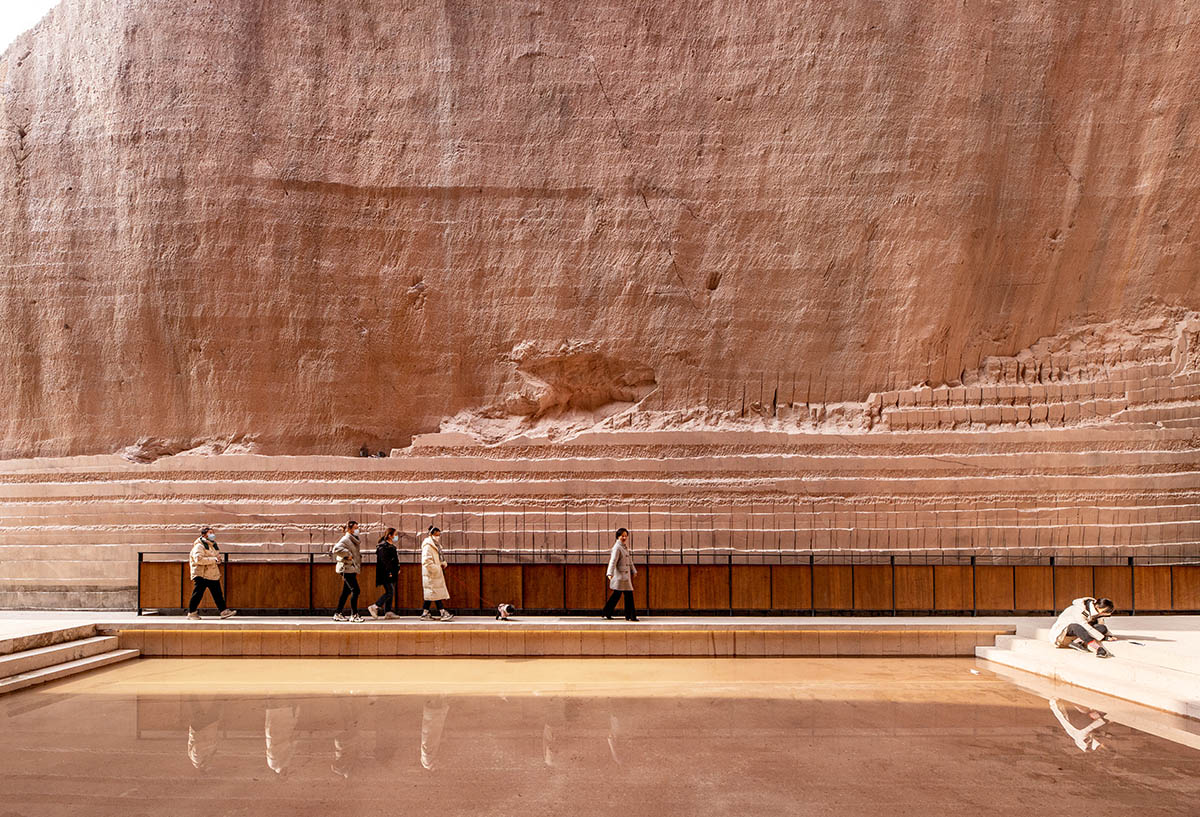 New Uses for the Quarries

Some of the immense—often cathedral-like—spaces in the rock face, which were created by chance when the stone was quarried and are up to 38 metres high, have good acoustics and are thus suitable for performances of traditional Wu opera or as spaces for presentations.

At another station, former stonemasons demonstrate the quarrying of stone in live presentations. There are also huge stone chambers that are used as a teahouse, or platforms from which visitors can observe the sunset through a spectacular hole in the rock face. 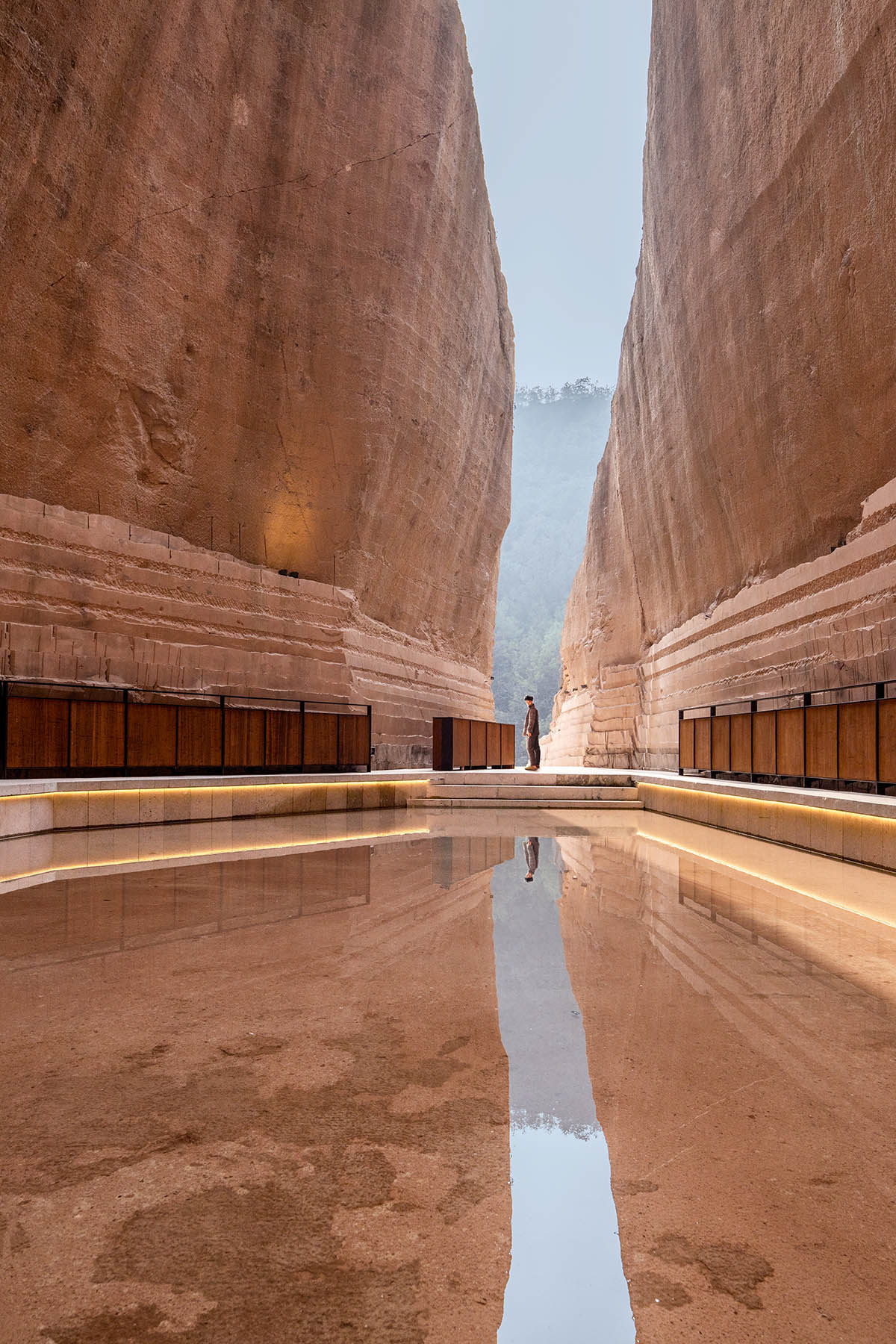 The nine stone quarries are connected with one another via a valley with a small village. An information centre with a stone quarry park with water surfaces, in which visitors will be given insights into history, flora, and fauna, is being planned there.

Besides new locations for social and cultural infrastructure, possibilities for economic development, for instance, a restaurant for catering to guests and an education centre for processing natural stone are also being created.

With their interventions, the architects are transforming the relicts of a landscape shaped by a work culture of hard physical labour into a symbol of the economic and cultural transformation in the rural area, which also contributes to socioeconomic and ecological improvements.

The spatial experience in the amorphous caverns, dramatic natural illumination, and acoustics offer an experience that is not possible in such a way in the normal day-to-day life of rural and urban populations. Embedded in the natural and cultural landscape of past centuries, a necessary measure is combined with a contemporary world of experience that brings together the different expectations and possibilities. Exploring "the reconciliation with nature", for instance, the exhibition will feature architectural models produced in China came to Germany by train on the route of the Trans-Siberian Railway, while all the other components of the exhibition were produced in Berlin.

The show will also consists of a large, extensive installation presenting the unusual spatial feeling in the stone quarries of Jinyun scenographically and enable visitors to experience it.

"Spectacular, translucent models give an impression of the complex spatial structure of the spaces carved into the rock, accompanied by large-format photos, plans, and descriptions," stated Aedes in a description.

Meanwhile, the show will present films aiming to communicate with the historical situation when the stone quarries were still in operation on the one hand, and also how the population, the craftsmen, and the administration have accepted and assess the newly created infrastructures today on the other. 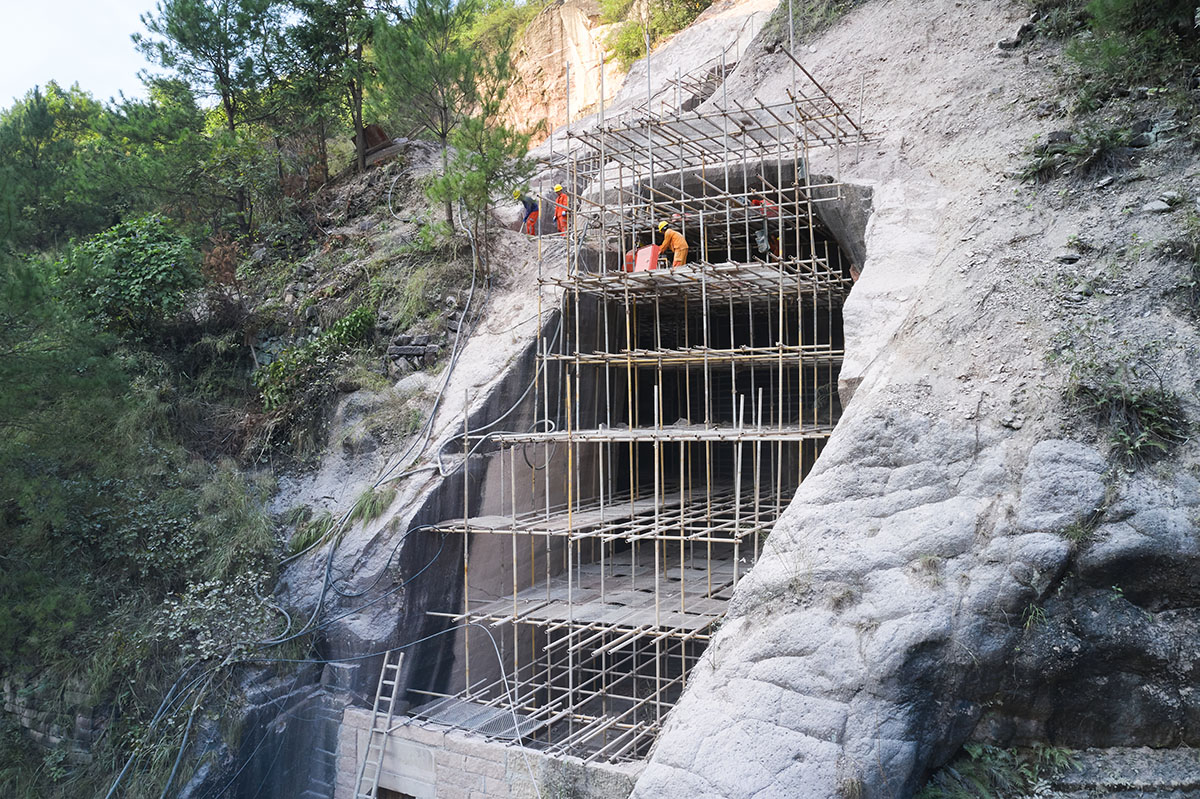 Xu Tiantian is the founder of the firm DnA_Design and Architecture in Beijing. She completed her Bachelor’s Degree at Tsinghua University in Beijing and Master’s Degree at the Harvard Graduate School of Design in Boston.

The firm works in an interdisciplinary way and has been creating innovative strategies for developing rural areas for a number of years.

The firm recently completed Huiming Tea Space in Lishui, China, which was designed to serve the local community and the surrounding villagers as a new facility for their tea plantation, production processes and workshop facilities. 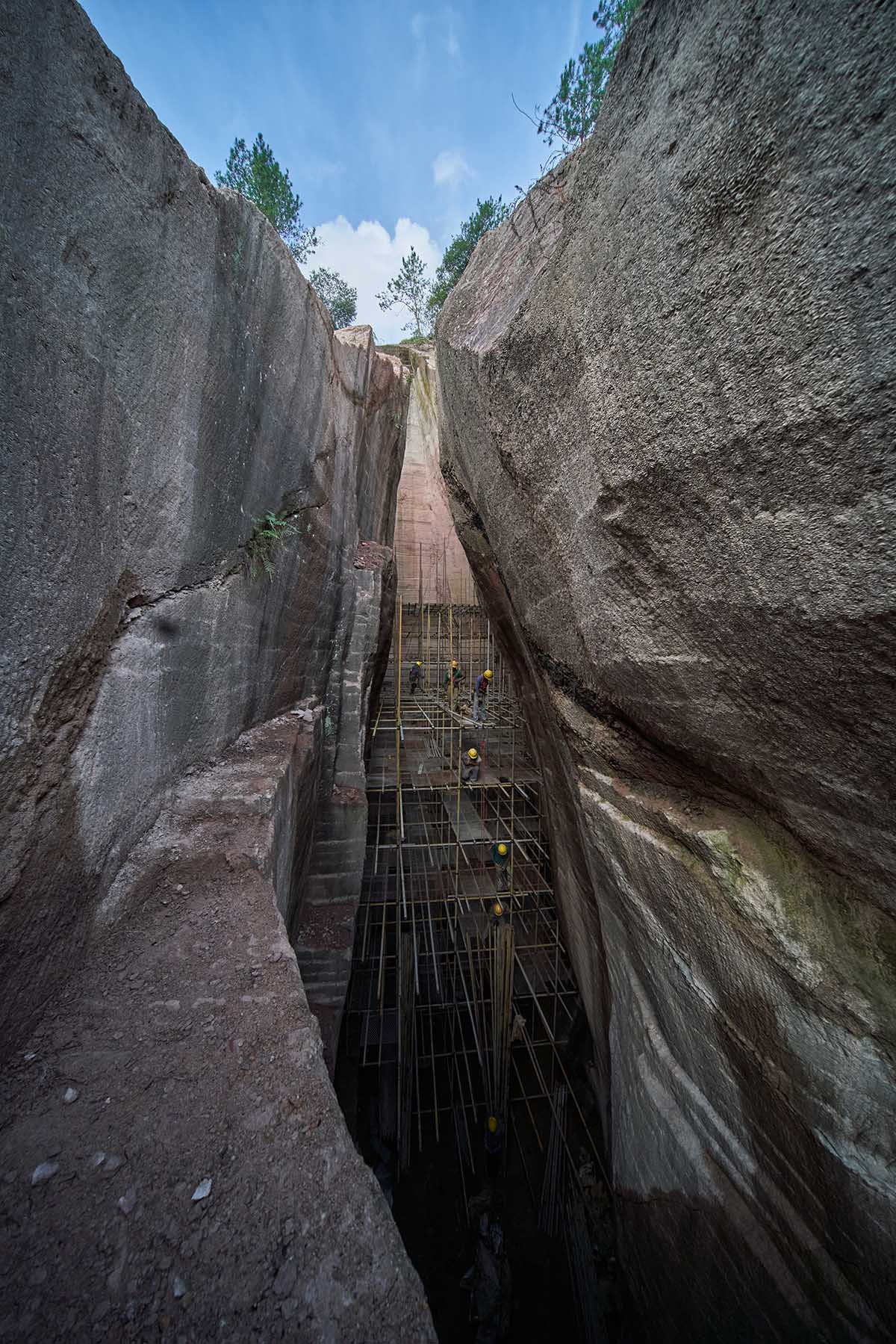 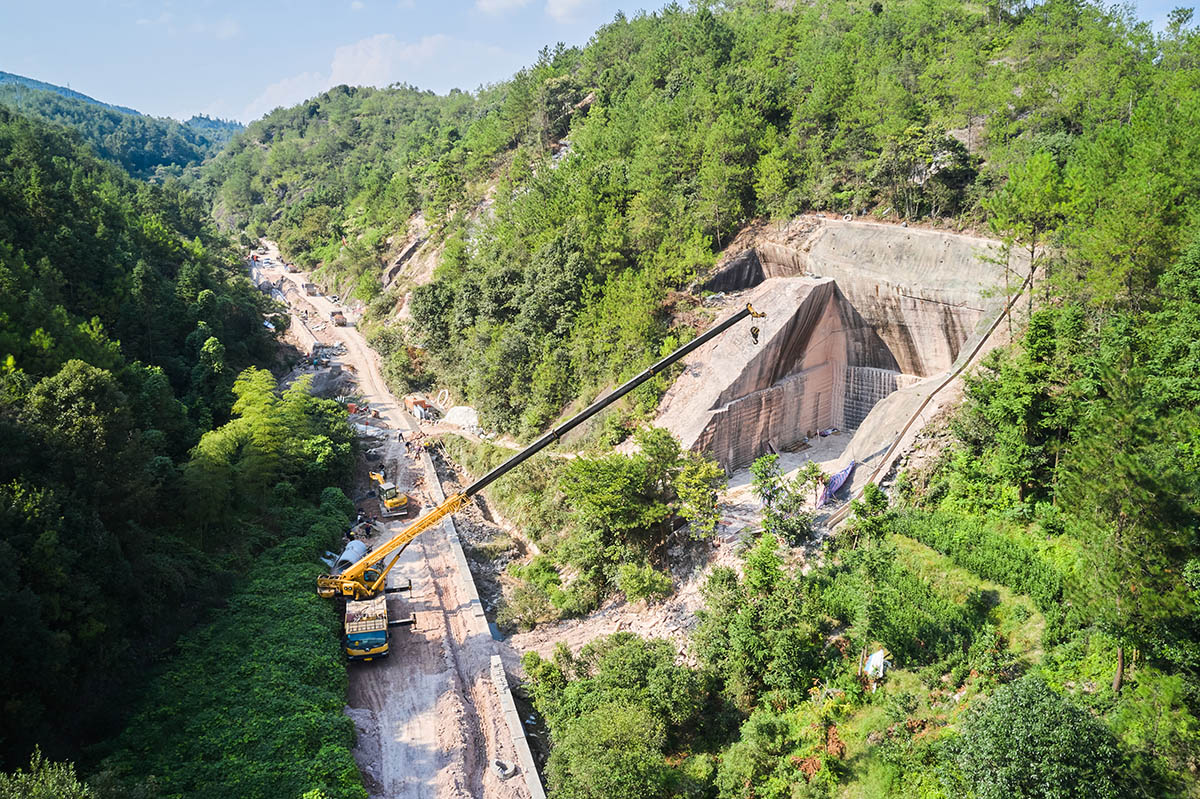 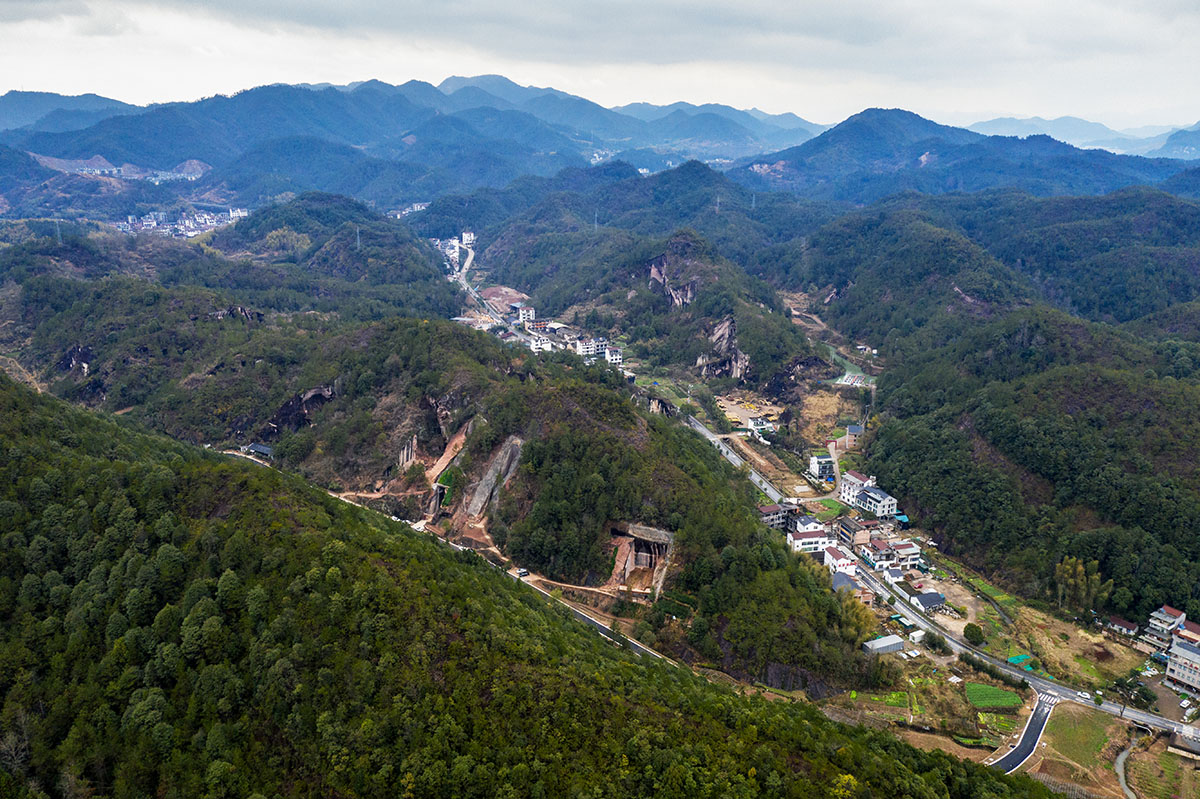 Adopting the strategy of "architectural acupuncture", she was recently a focus of debates about the revitalization of rural villages and landscapes in Songyang, which was presented in an exhibition conceived by the Aedes Architecture Forum in Berlin in 2018.

She was then presented at the 16th Venice Architecture Biennale in Venice as well as subsequently at the AzW in Vienna. She delivered a lecture as part of Charles Correa International Lecture programme at the University of Michigan Taubman College in 2021.

The book THE SONGYANG STORY Architectural Acupuncture as Driver for Rural Revitalisation in China: Projects by Xu Tiantian, DnA_Beijing, edited by Hans-Jürgen Commerell and Kristin Feireiss, was published by Park Books in Zurich in 2020.

In addition to many other awards, Xu Tiantian received the Moira Gemill Prize for Emerging Architecture in 2019.

In the opening of the exhibition on 18 March 2022, Hans-Jürgen Commerell Aedes, Berlin, Friederike Meyer, Editor-in-Chief, Baunetz, Berlin and Dr. Eduard Kögel Urban Planner, Berlin will be speaking at the opening.

Xu Tiantian will be participating with a video message at the opening.