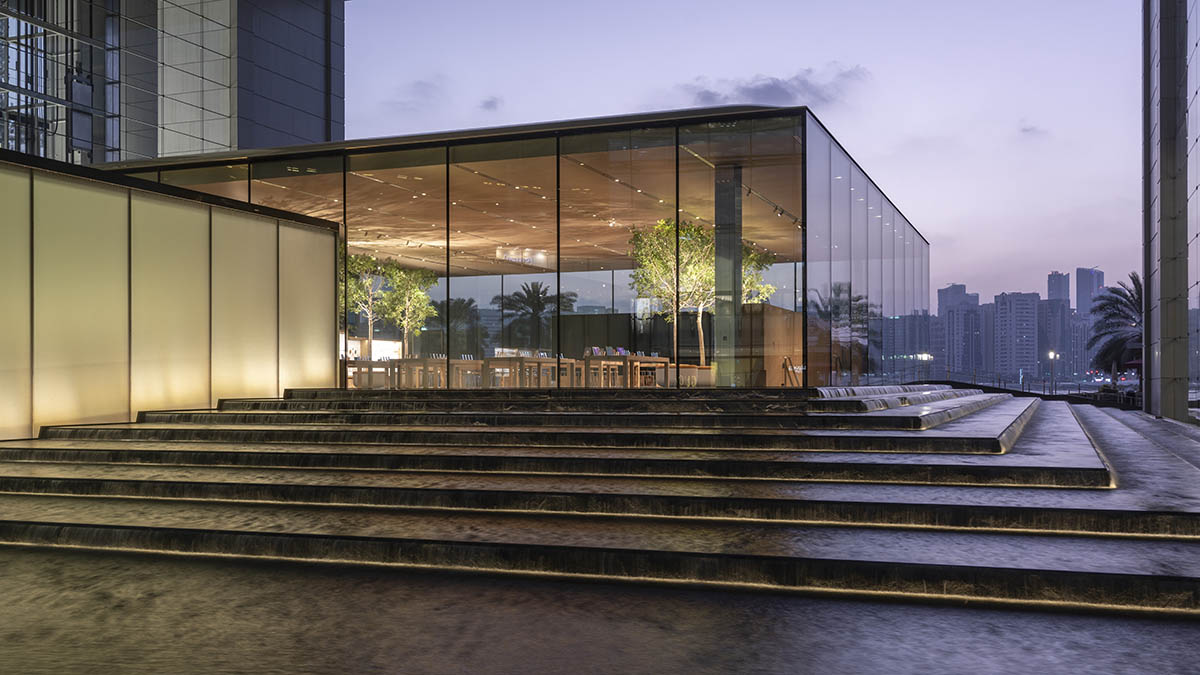 Built beneath the Abu Dhabi Securities Exchange building and adjacent to the Galleria Al Maryah Island Mall, the fully-glazed store, called Apple Al Maryah Island, sits atop a cascading black water base that lead visitors seamlessly into the store.

The new store is located in Abu Dhabi’s prestigious financial district, Apple Al Maryah Island clebrates the soul of place on the island’s waterfront. Elevated above the promenade, the building marks its presence with a distinctive language. 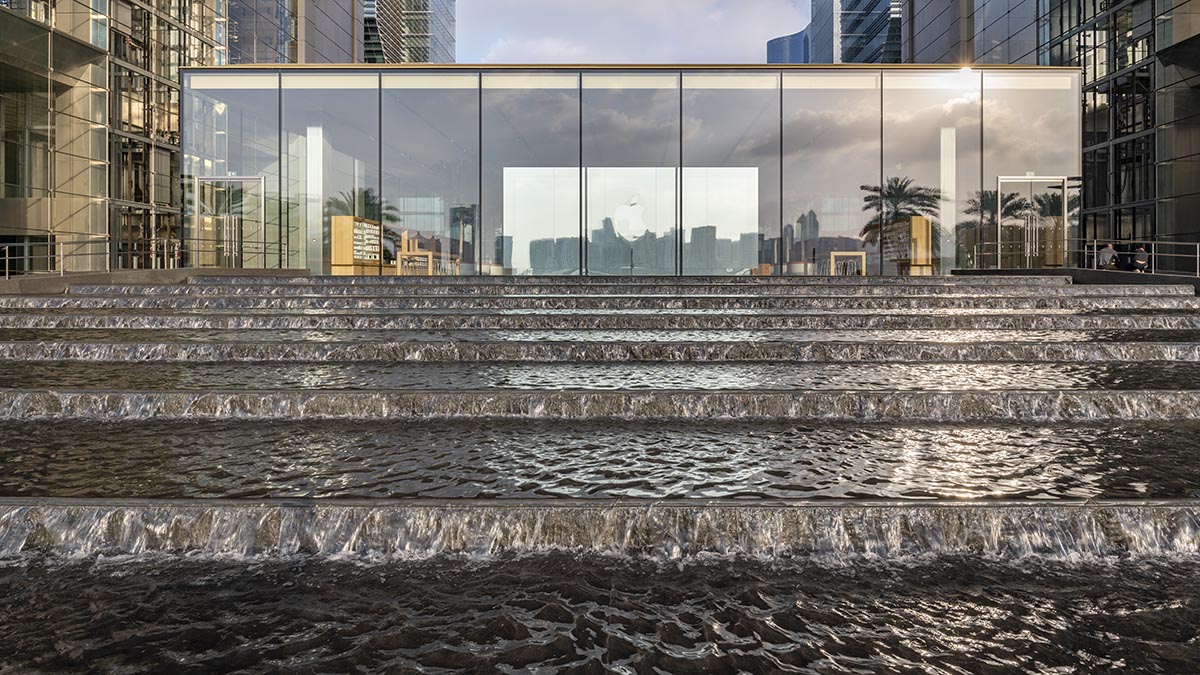 Apple Al Maryah Island was opened to the public on 25 February, 2022.

While the store creates a direct connection between the mall and the water’s edge, it is also activating the promenade and the public plaza for visitors.

"The design of Apple Al Maryah Island is all about the view of the extraordinary skyline of Abu Dhabi and creating an experiential route for visitors, as they walk through surrounded by the calming water and mirrors," said Stefan Behling, Head of Studio, Foster + Partners.

"It seeks to draw the vitality of the waterfront promenade through the site and into the store, blurring the boundaries between inside and outside, and generating an exhilarating and inspirational Apple store," Behling added. 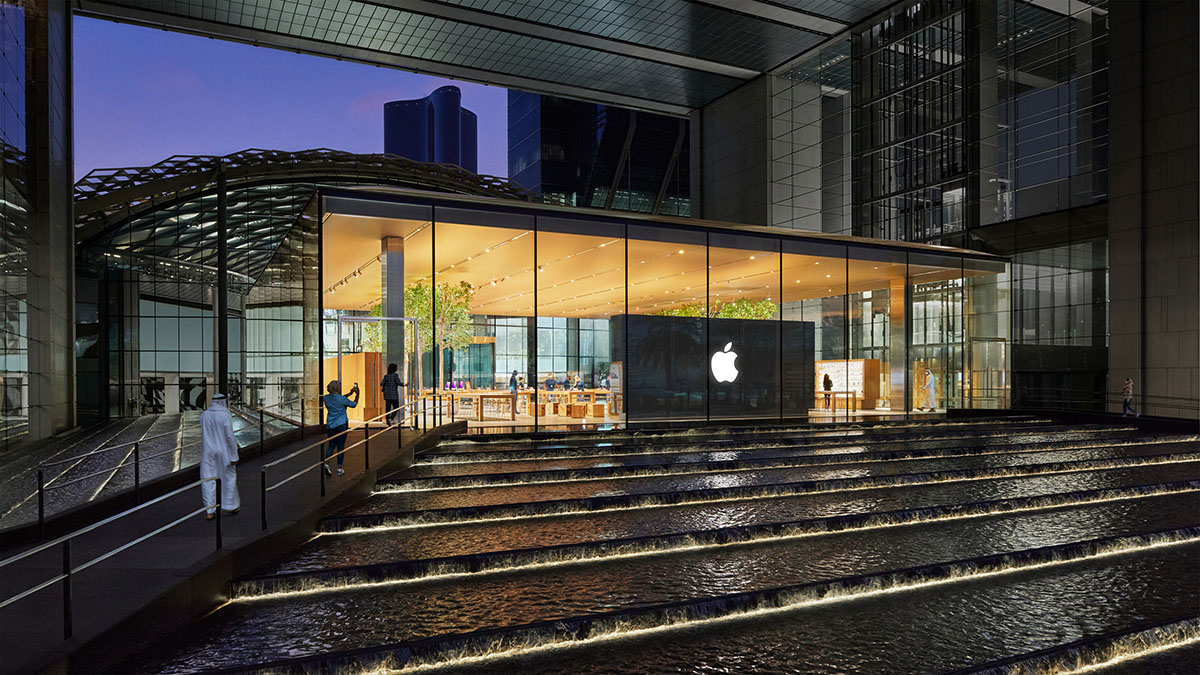 The studio used a pure rectilinear glazed structure that is situated on top of a new stepped pyramid cascading water feature, made of Absolute Black granite stone.

On the front façade of the store, visitors are also able to access the store via two external entrance ramps cutting through the water and rising to the store. These ramps create a new link between the promenade, store and mall.

The same granite continues seamlessly inside the store, drawing life from the promenade into the store.

A giant mirrored stainless-steel portal welcomes visitors from the mall, enveloped by the sights and sounds of the water jets that cascade down over the exterior glass walls.

"The water droplets catch the light and shimmer as they run over the milled glass surface," said Foster + Partners. 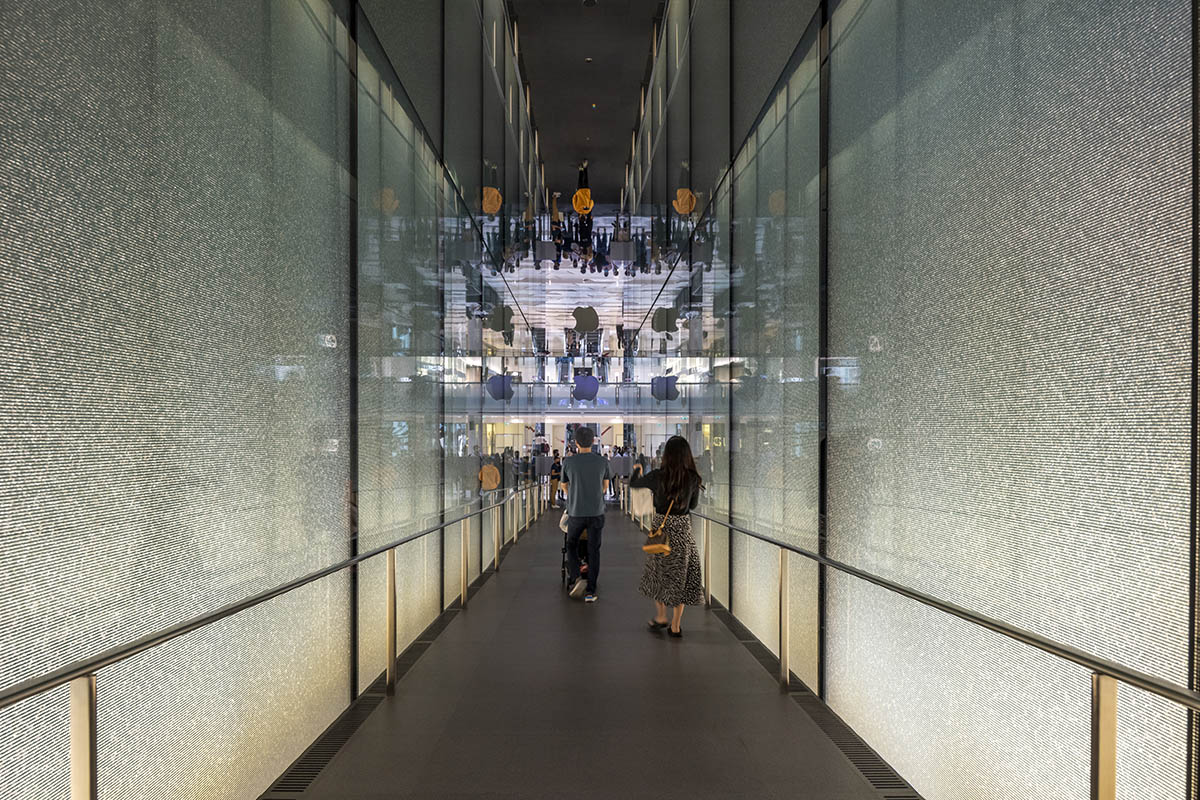 Inside, the studio creates a 72-foot-long (22-metre) jointless stretched mirror foil ceiling that adds drama to the space – a single uninterrupted plane that creates a kaleidoscopic effect. Visitors enjoy the layers of the water falling down the walls, and reflections travelling infinitely up towards the sky.

The interiors of the store are designed as light-filled spaces that boast panoramic views of the coastline and the city of Abu Dhabi beyond. Internally, the store is laid out on a single level. 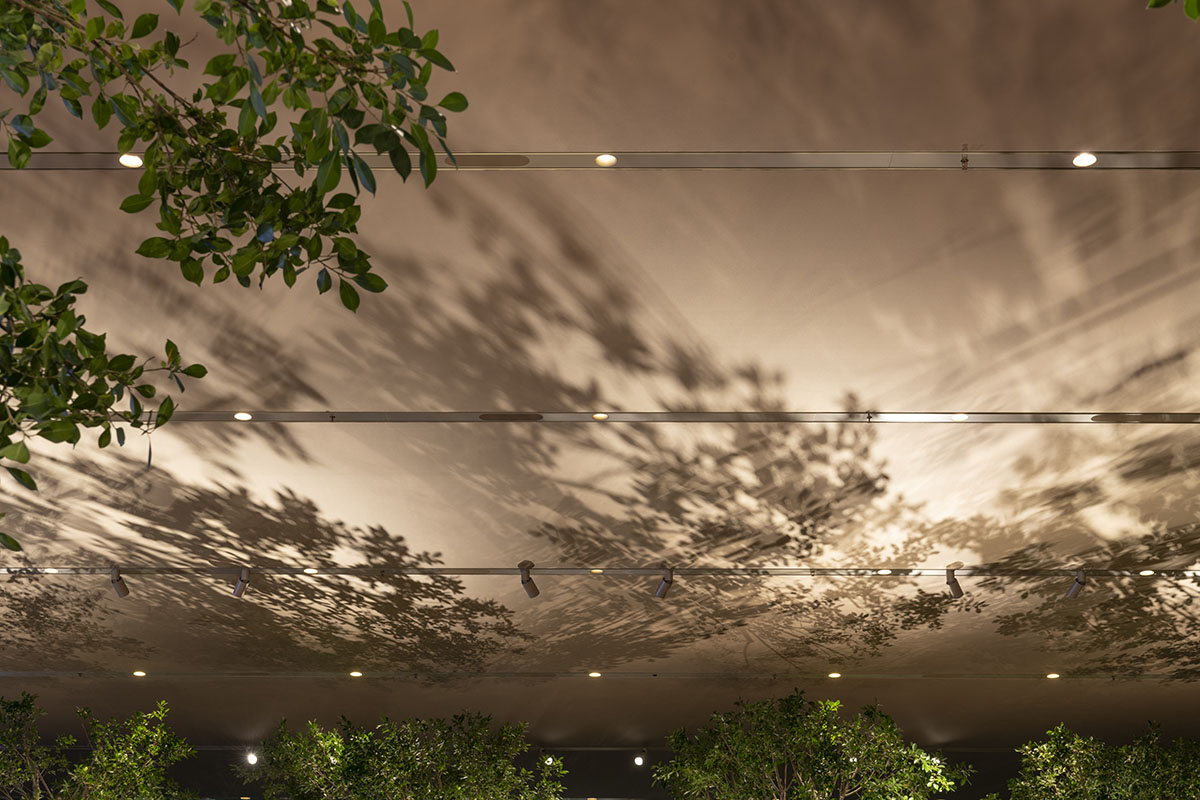 The Forum is located towards the east, with Apple Avenues flanking the northern and southern ends of the store. Display tables are nestled amongst the Ficus trees, adding greenery to the interior.

The height of the interior reaches at 5.75-metre that lends a sense of spaciousness, clad in stretched gold fabric ceiling enhancing the acoustics of the space. "Lighting is subtly incorporated into the avenues to illuminate the metallic ceiling at night, filtering through the leaves of the Ficus trees and casting theatrical, dappled shadows on the surface above," added Foster + Partners.

"Both avenues act as freestanding pieces of furniture, while simultaneously functioning as the vertical walls of the two staircases behind them."

"Their timber panelling travels down the staircases to the Boardroom below, creating a unified language across both levels," the studio added. As the team emphasized, the project is one of the first in the region to have radiant floor system combined with displacement ventilation to help cool the building.

Apple Al Maryah is aimed to become a new creative hub and a coveted destination for the region. 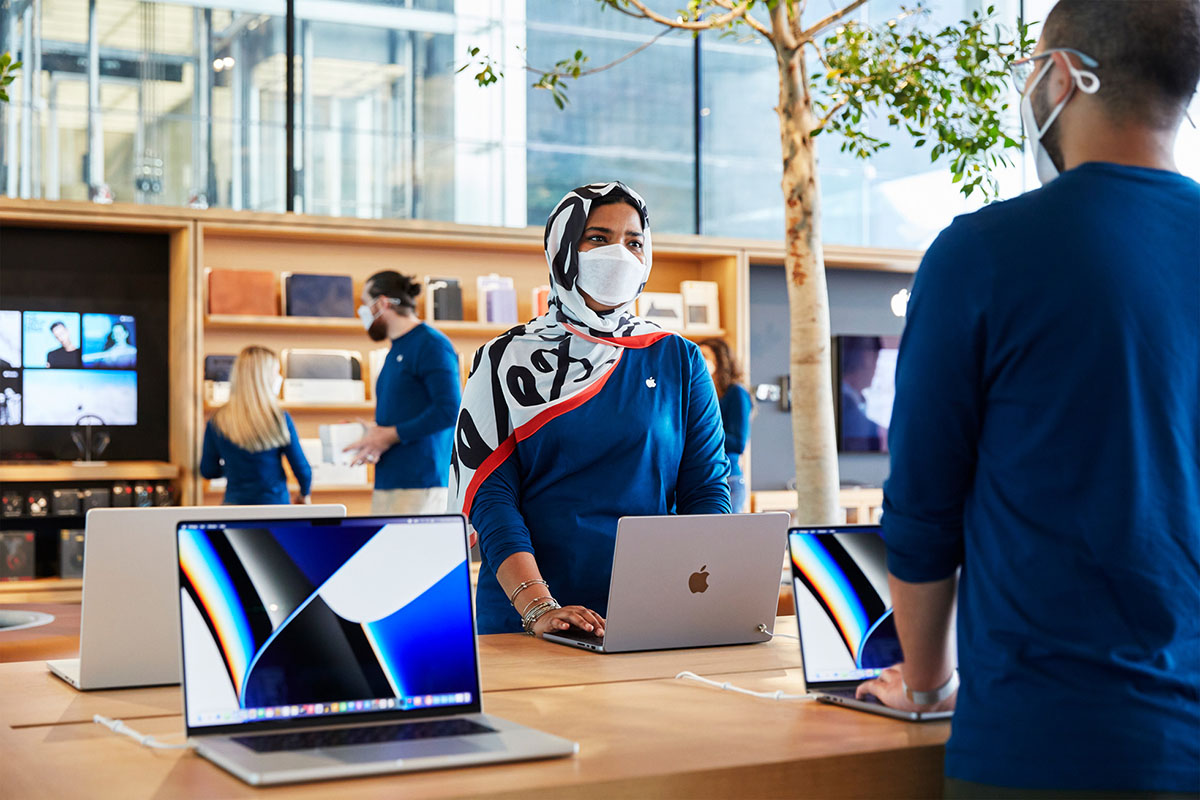 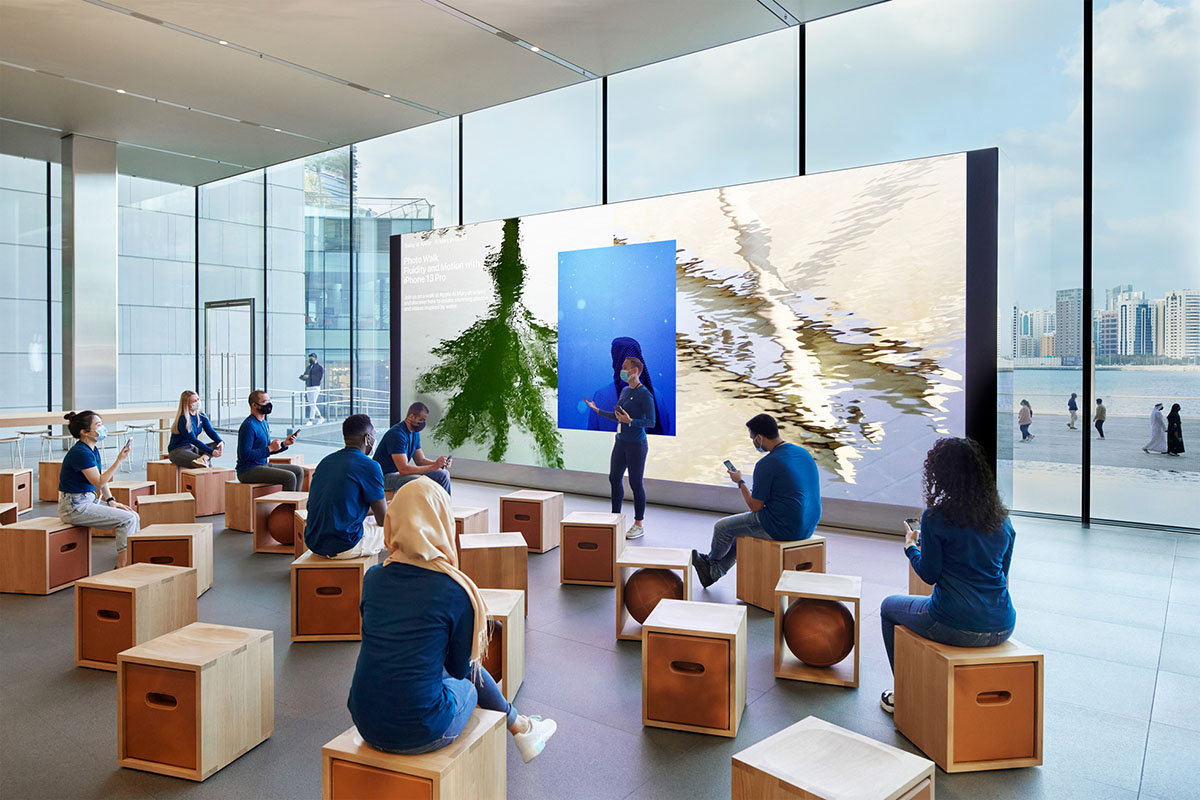 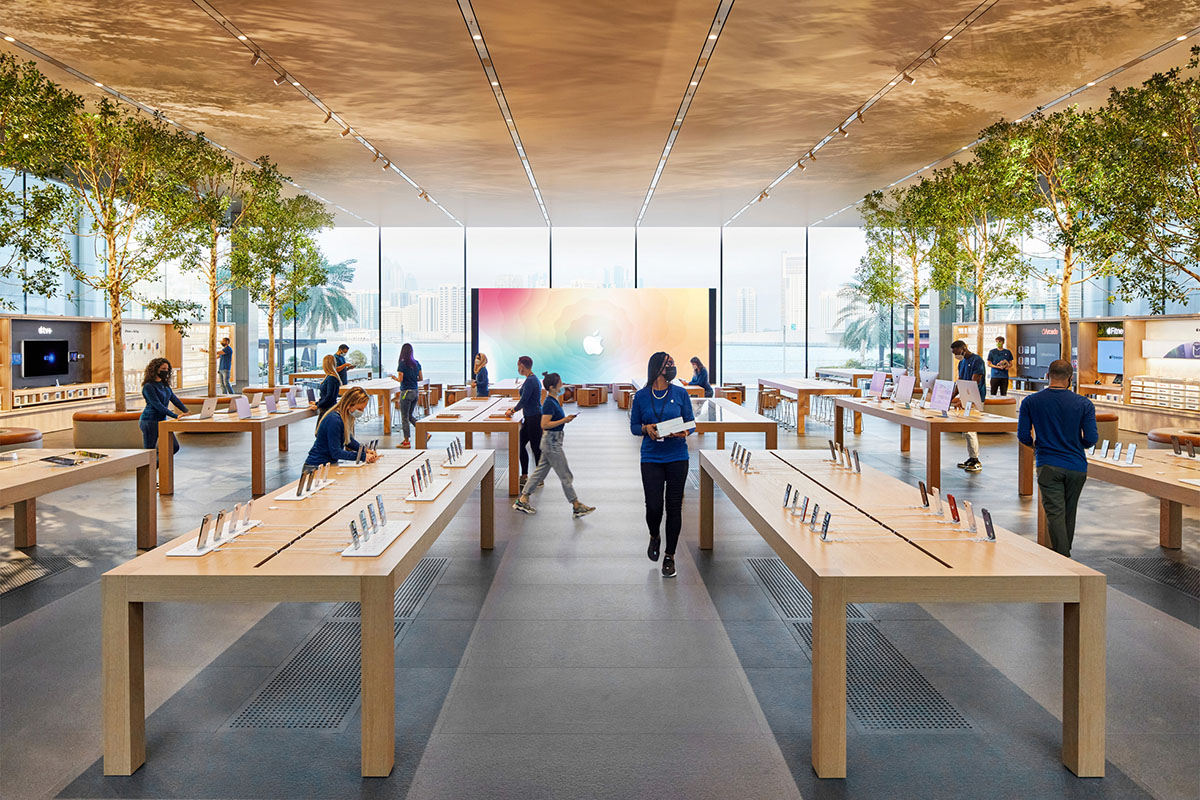 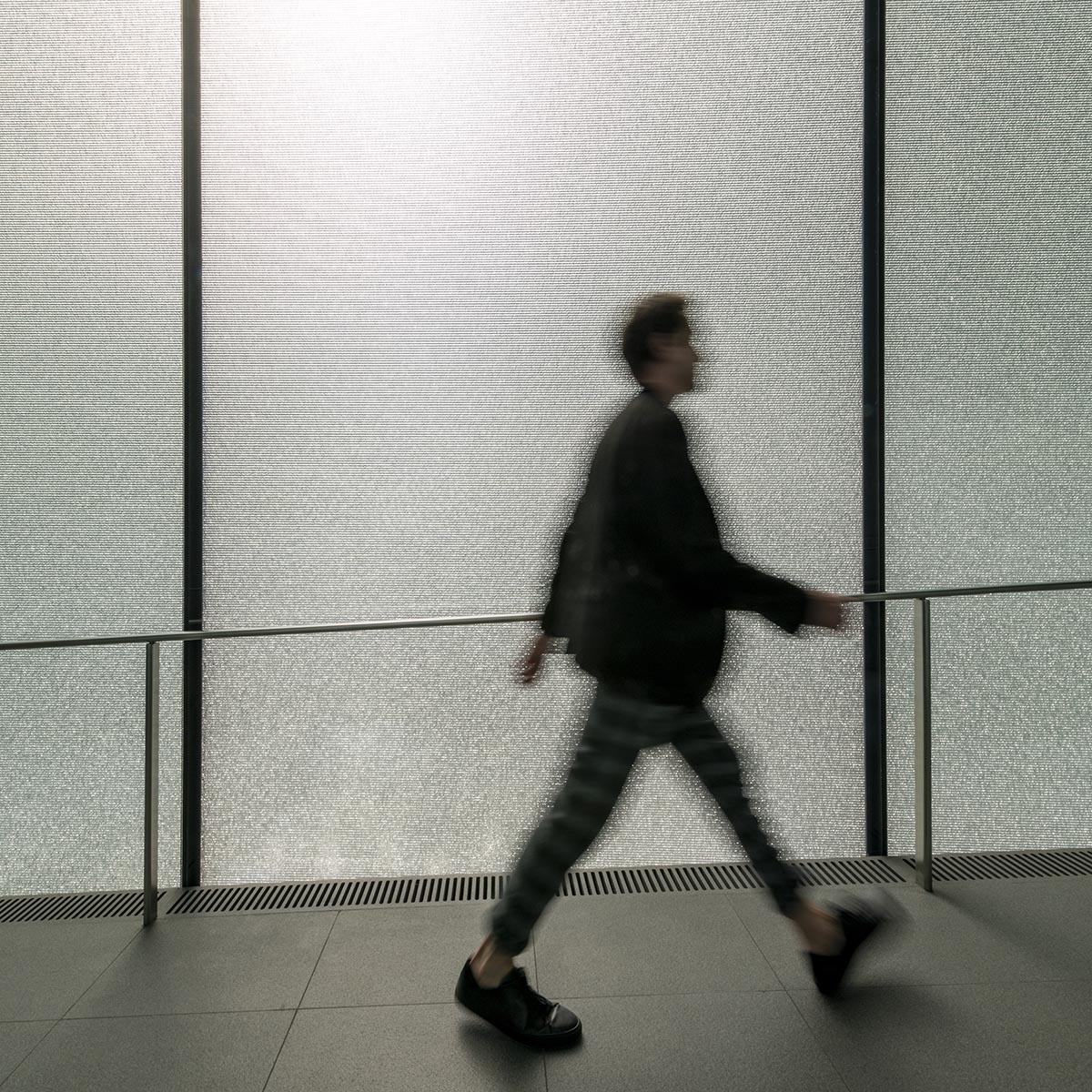 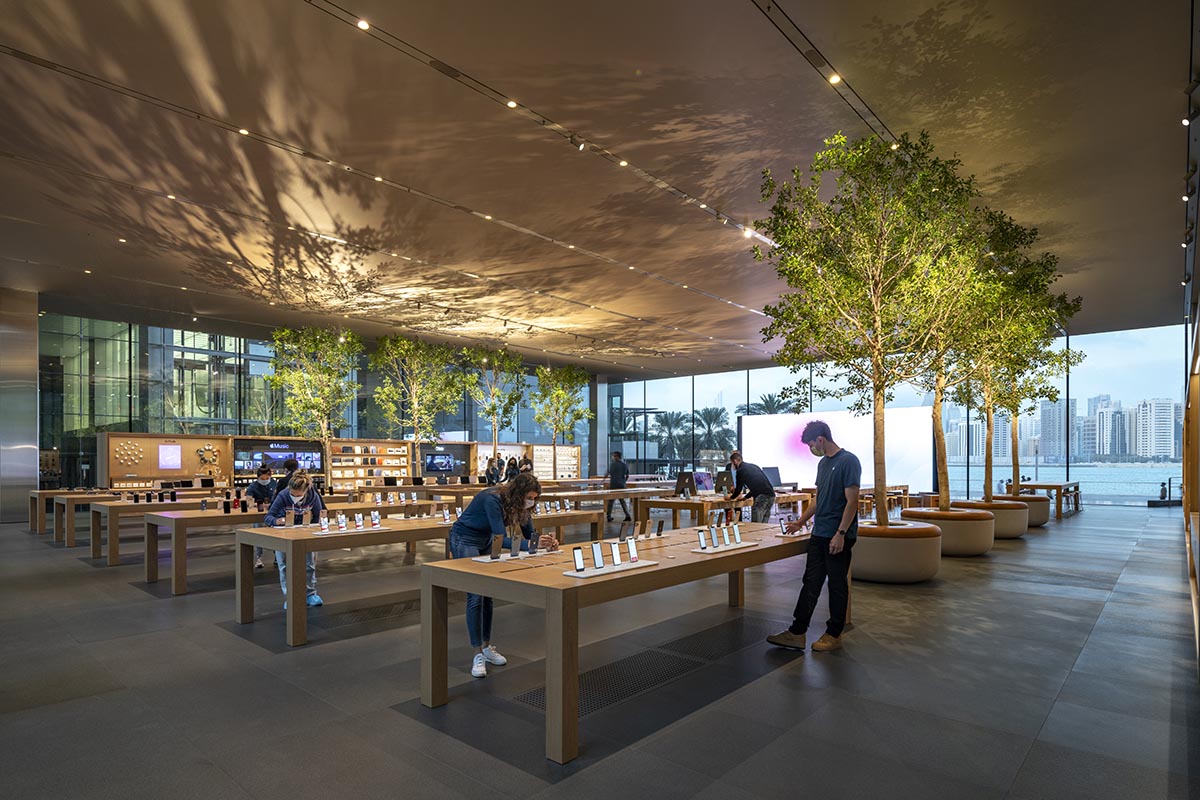 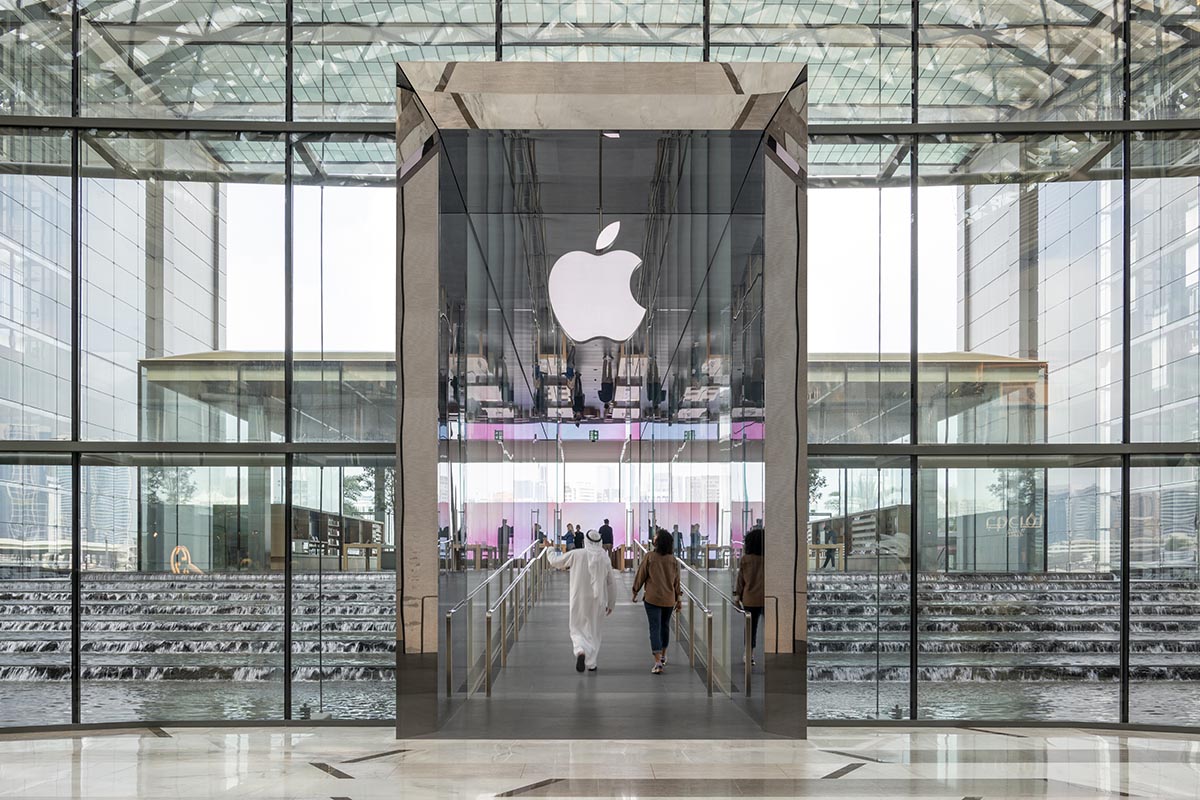 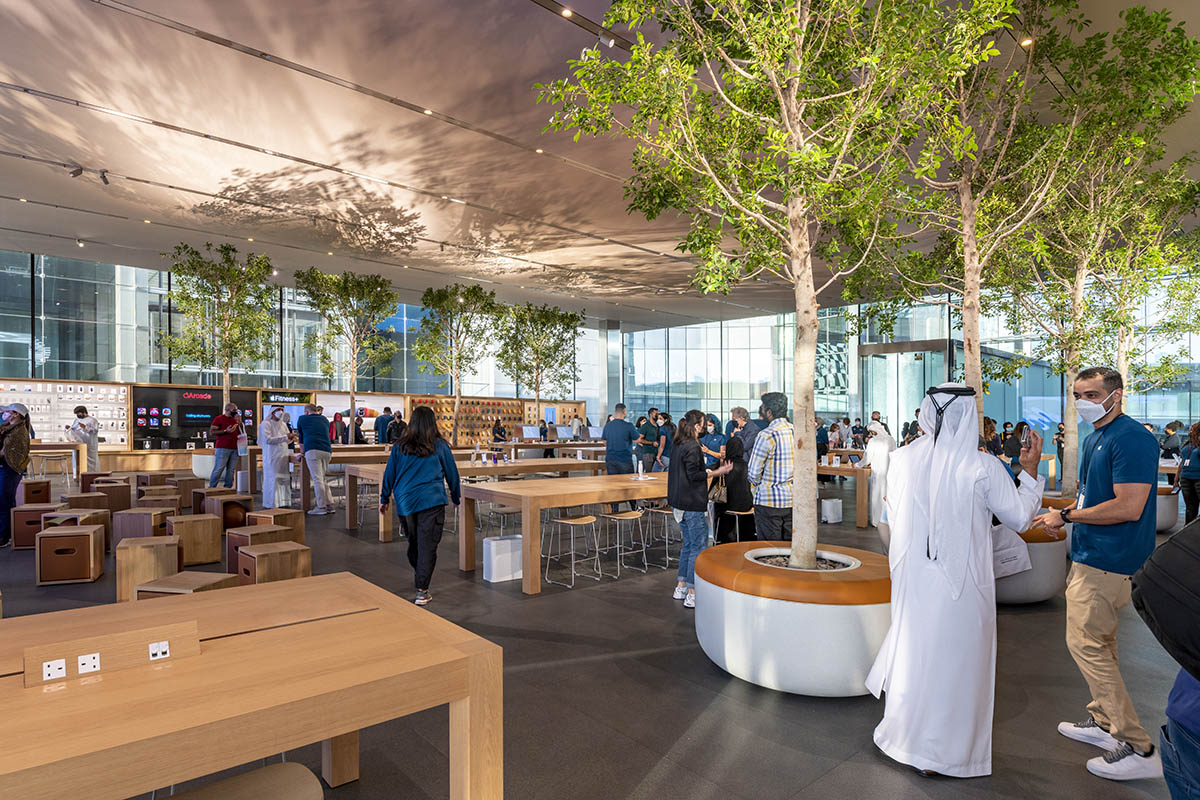 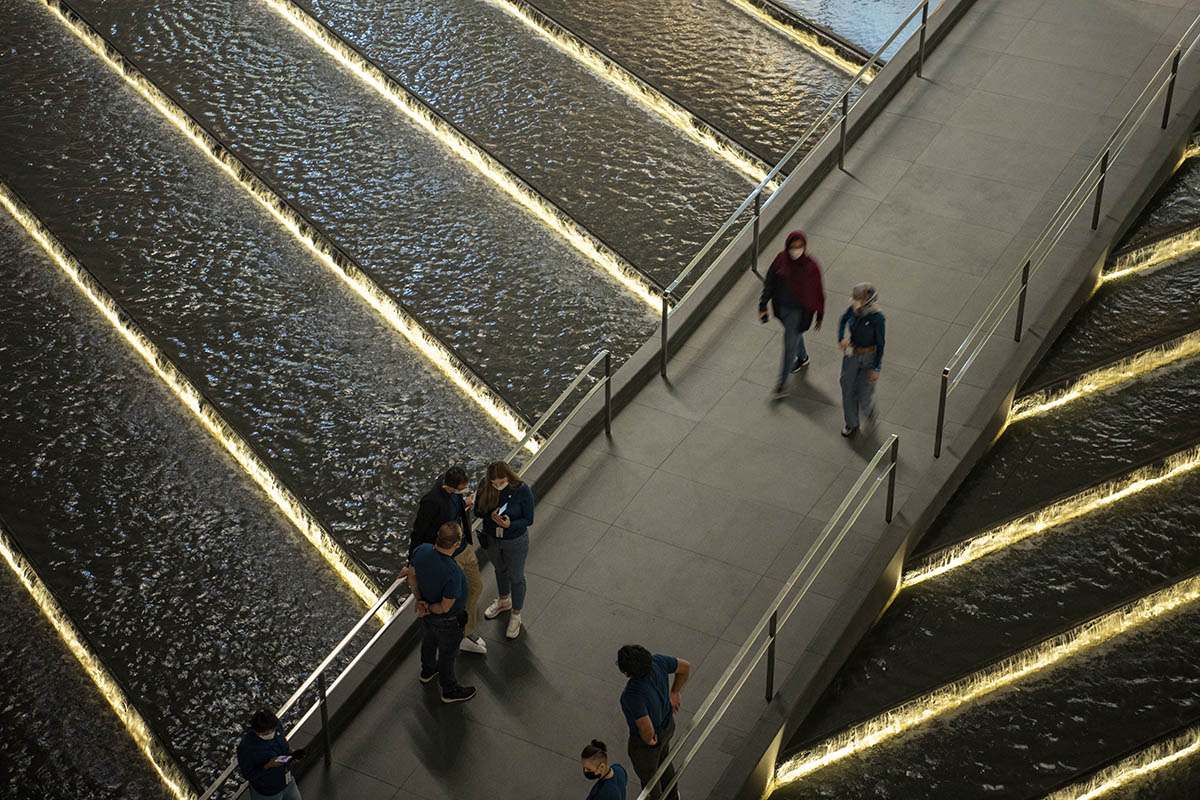