Named Can Monges, the 250-square-metre house is located in Ses Salines, a small municipality in the south of Majorca, one of the Balearic Islands, Spain.

Built with by using hemp, lime and marés, the house feature earthy tones and pastel-colored palette combined with wooden doors and windows on the façades.

The architects followed the premise of "think global, act local" and aimed to achieve a comprehensive overhaul that focuses on reuse and recycling.

"How have we achieved it?. Letting ourselves be carried away in the architectural design by what the material in its essence can bring us," said Ideo arquitectura.

"In this way, the rubble generated by the work itself, the reuse and recycling of finishes such as flooring, tiling and existing doors, the use of new materials from companies on the island, all of this, together with local construction techniques such as plastering lime, make Can Monges a place for experimentation and testing," the office added.

The house was a 200-year-old structure and suffered from a huge problem of rising damp, according to the architects. Due to the "hygrothermal regulation caused by hemp material" - which increases comfort and saves energy, the architects used hemp on the ground floor and roof of the building.

The studio used hemp on the roof of the building due to the material's very high thermal capacity, and as they noted, it is three times higher than conventional treatments, and as well as in the walls separating rooms as it has extraordinary acoustic capacities (high density).

"After evaluating options, we took a risk and decided to use it. We are pioneers in the islands in the use of hemp, and we hope to be an example for other architects," said the studio. 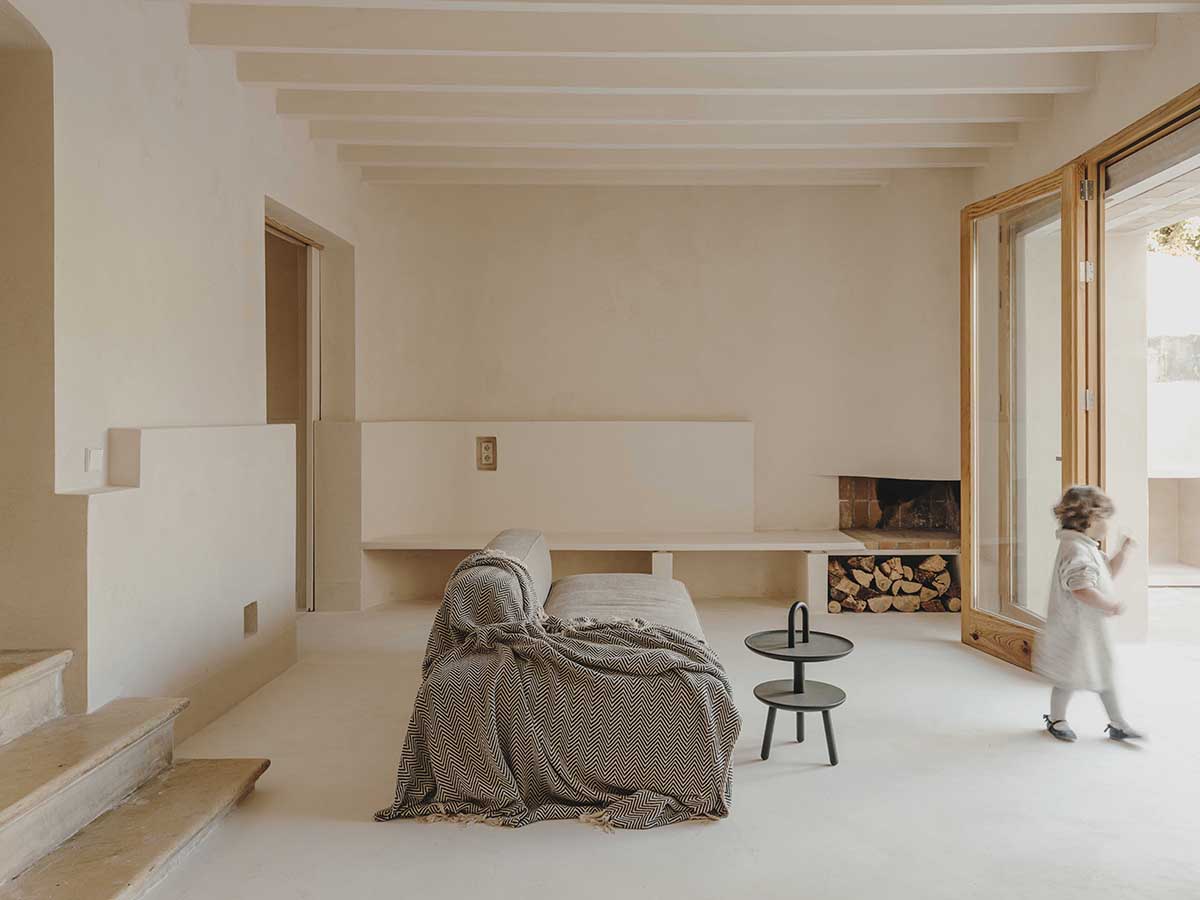 "As we know, in Mallorca, and in almost all of Spain, this material has not yet been worked on due to ignorance and lack of companies that manufacture it (in 1961 the United Nations prohibited its cultivation, now lifted)."

"However, we knew that it is suitable for areas with high ambient humidity such as the island," studio added.

Hemp collects moisture from the ground and transmits it to the interior environment - it does not stay on the wall," according to the studio.

The architects implemented a one-meter-high perimeter plinth that runs through the entire ground floor. When the house is closed, the humidity by capillarity that has passed into the environment through this hemp plinth disappears thanks to the strategic location of several ceramic vents on opposite facades that renew the air.

As the team explained, they learned that the raw energy consumed in its manufacture is very low, fast growing and easy to cultivate. It is healthy and highly durable.

"We have to know that the use of hemp in construction contributes to sequestering, and even reducing, greenhouse gases during the useful life of the building," the studio added. Without a doubt, it is one of the materials of the future since it is also beginning to be used as a structural system, penalizing our esteemed concrete.

The ropes of the railings of the stairs are also made of hemp. It has been the only material that the architects have prescribed from outside Mallorca.

According to the studio, Can Monges can become an example of ecological architecture that encourages promoters on the islands to cultivate this plant for use in bio-construction.

"We know that traditional companies on the island have already shown in their R&D departments that it works in humid environments, and they have been looking for "farmers" who want to grow it for our purpose for a year," the firm added.

Can Monges can provide an opportunity for local architects, builders, and entrepreneurs willing to ultimately improve the quality of people and cities.

To make this rehabilitation an environmentally effective place, first of all, the architects had to consider what to do with the rubble generated by the work. Their approach were based on two principles: reuse and recycling.

For example, they used the rubble remaining from the demolition to consolidate façade walls. The team also used the “marés” blocks from the old dryer for the new furniture in the kitchen and bathrooms.

The architects renovated the existing deteriorated pavement, reusing it in the lintels of the new openings in the façade. "All of this contributes to reducing the use of the planet's resources," as the team explained.

The architects used clay and ceramics supplied by local companies which were used in downspouts, gutters, and other elements. The fireplace in the living room is built with the inverted gesture of two curved vaults, the same ones that the architects have used for the new floor in the kitchen and for the lighting fixtures in the rooms.

For doors and windows, the architects have kept the Northern pine (also from Mallorca) in mind.

They have endowed the carpentry with an enormous personality with a new system of pre-frame-frame in a single piece in the shape of a "T" that Virginia del Barco has invented.

"The design responds to the lack of flatness of the interior facings of the 70 cm thick walls. Why not leave the gaps free and place all the carpentry on the inside face of the wall? We did that. The "T" is embedded in a wound in the wall made for this purpose to consolidate the frame, and all the carpentry is directly visible. Again, the material in its essence is our goal always," added the studio.

Lime revoke. "Lime construction is an ancient technique in Mallorca," as the architects added. Until now, lime was only used on facades and vertical walls as well as on floors and ceilings.

The result of aesthetic and plastic continuity throughout the interior reveals an atmosphere of peace and calm, one of the few customer requirements. 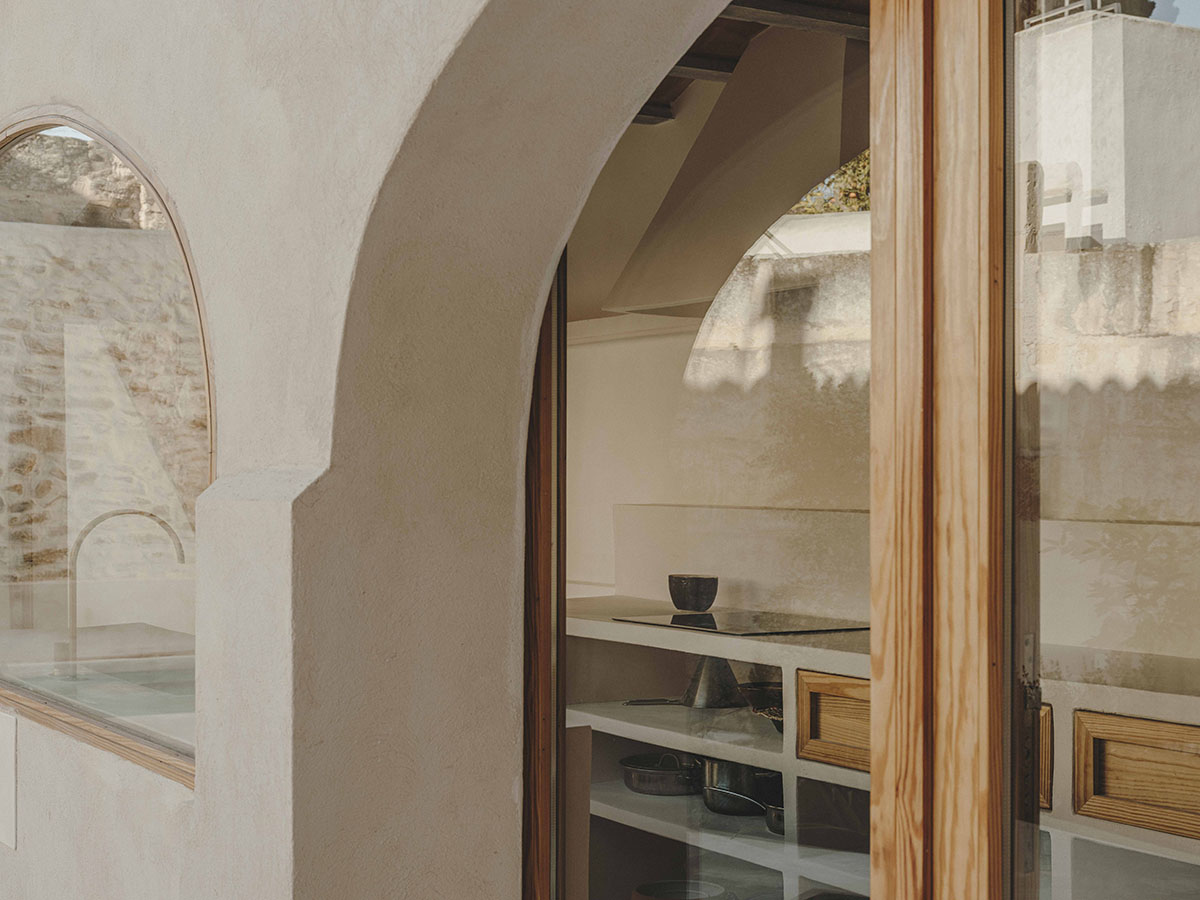 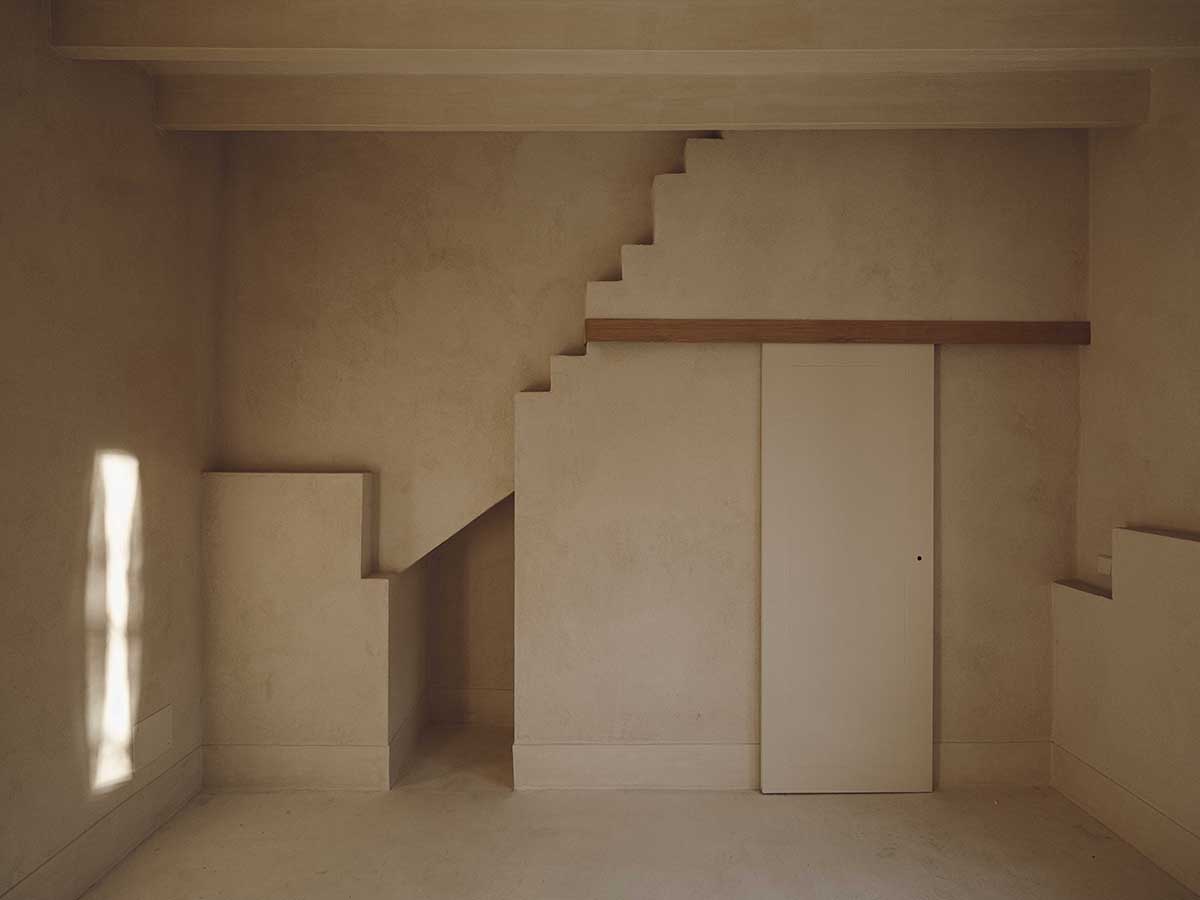 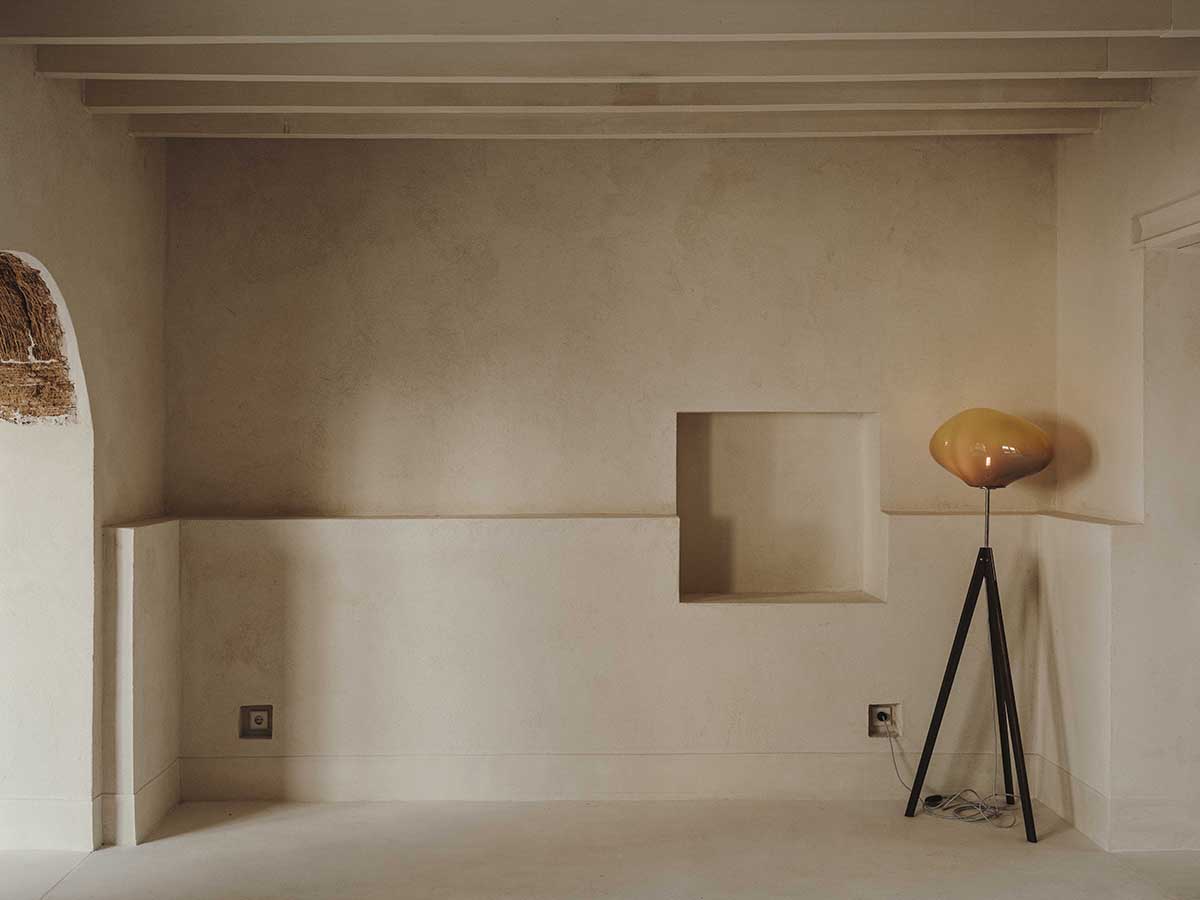 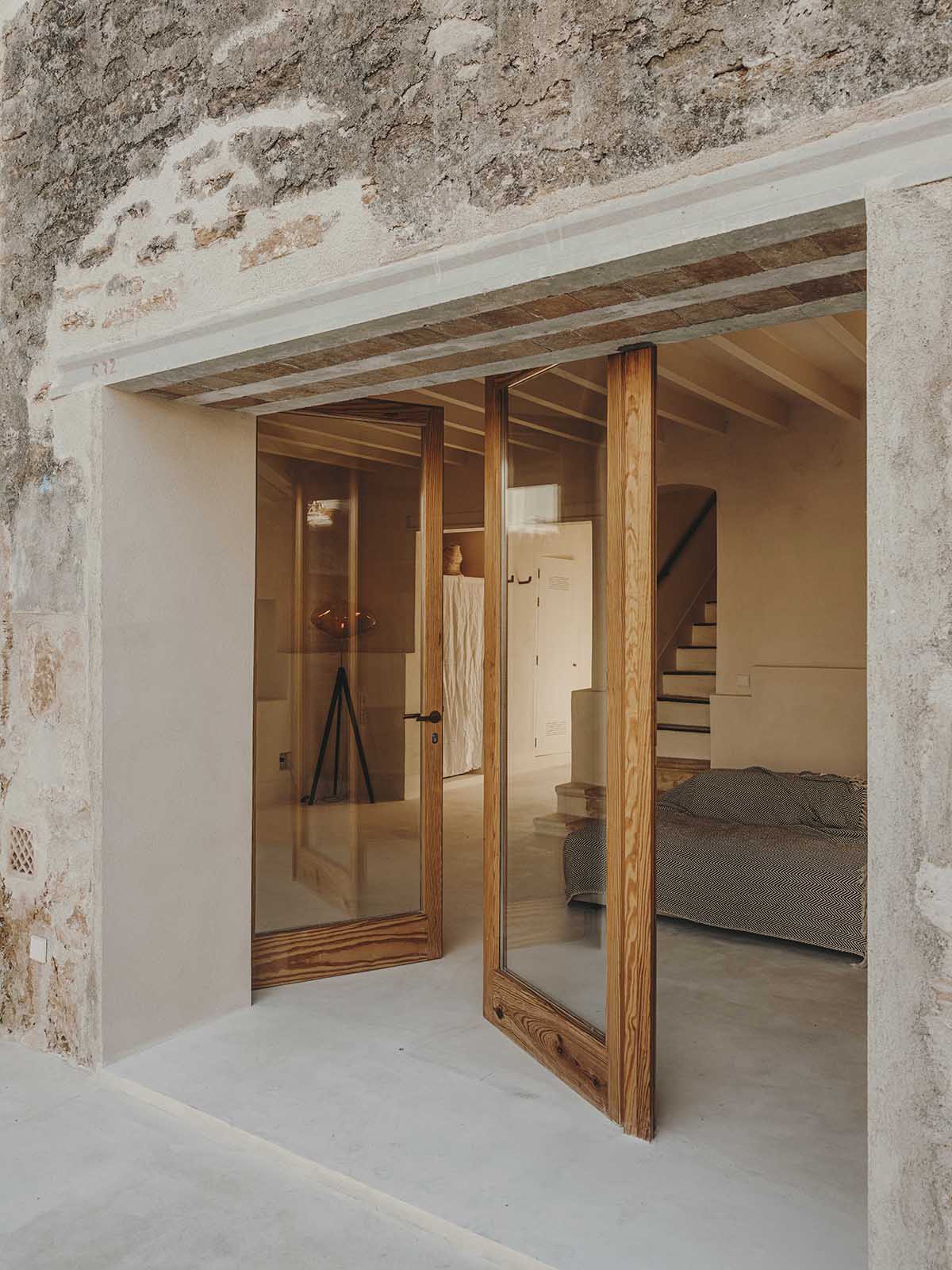 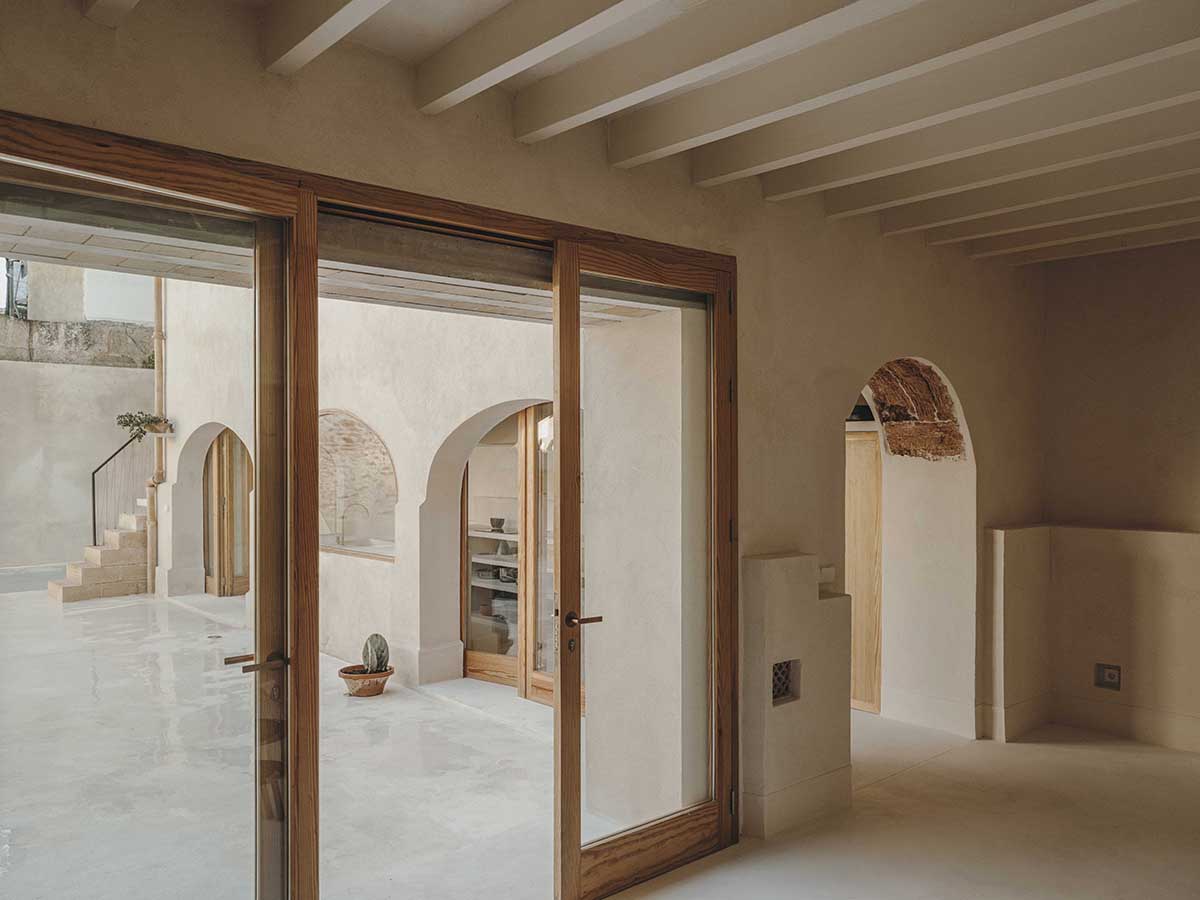 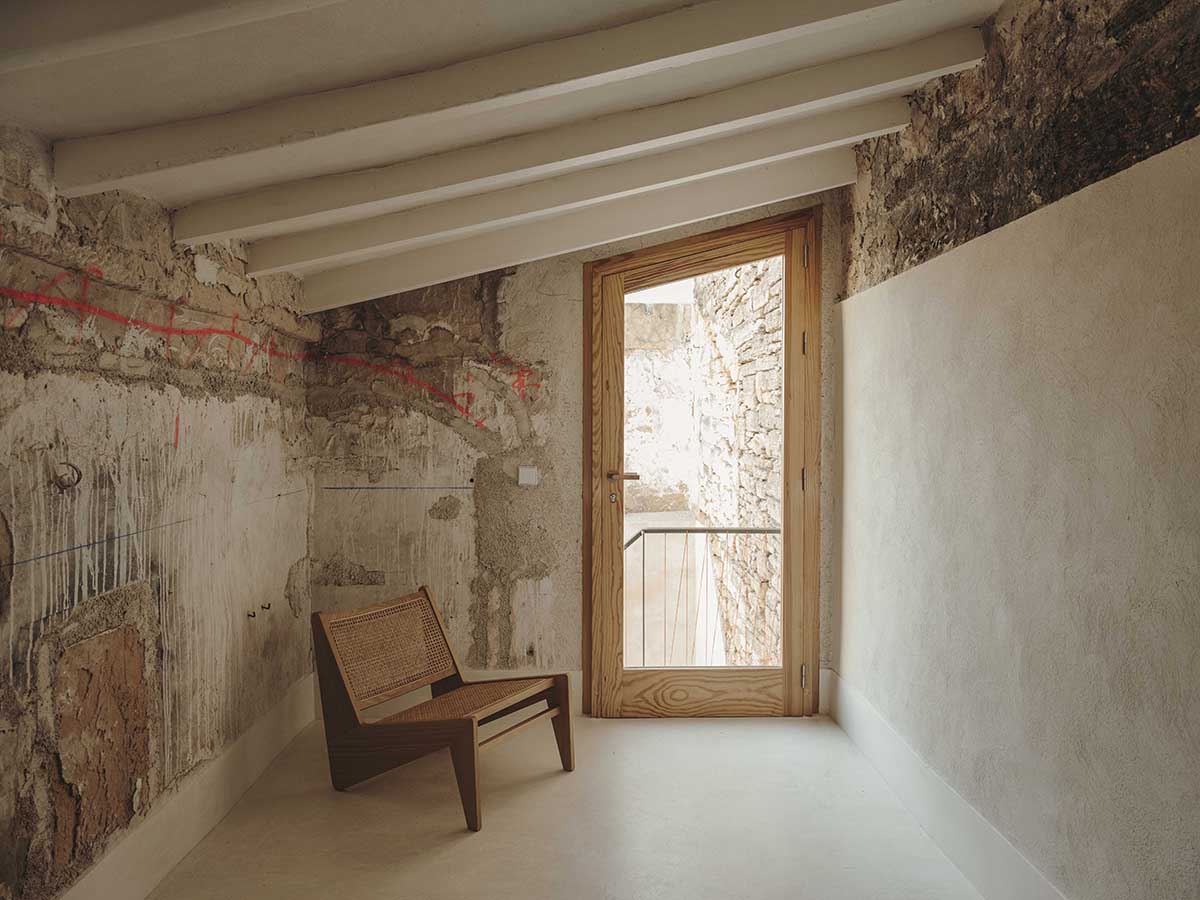 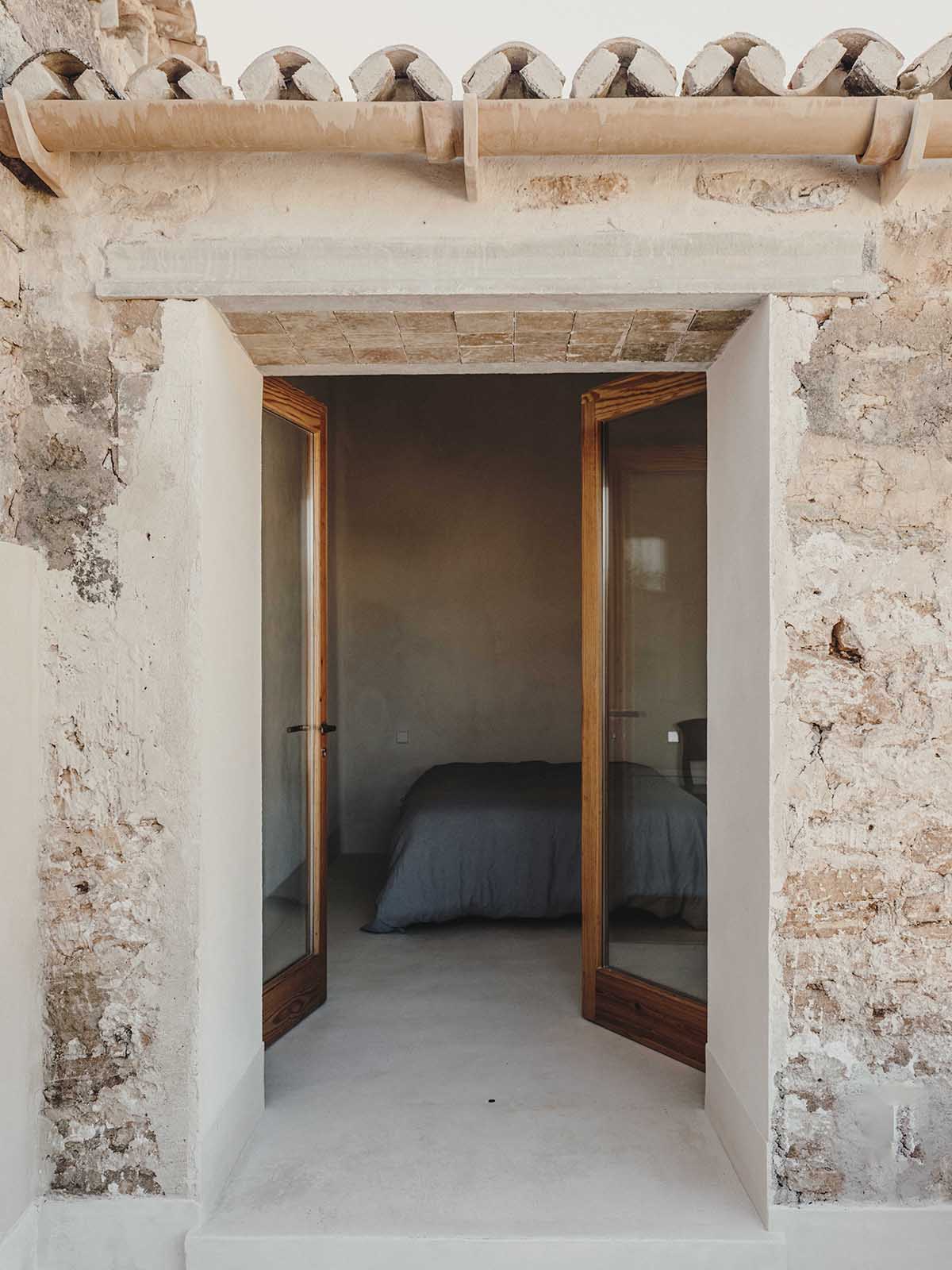 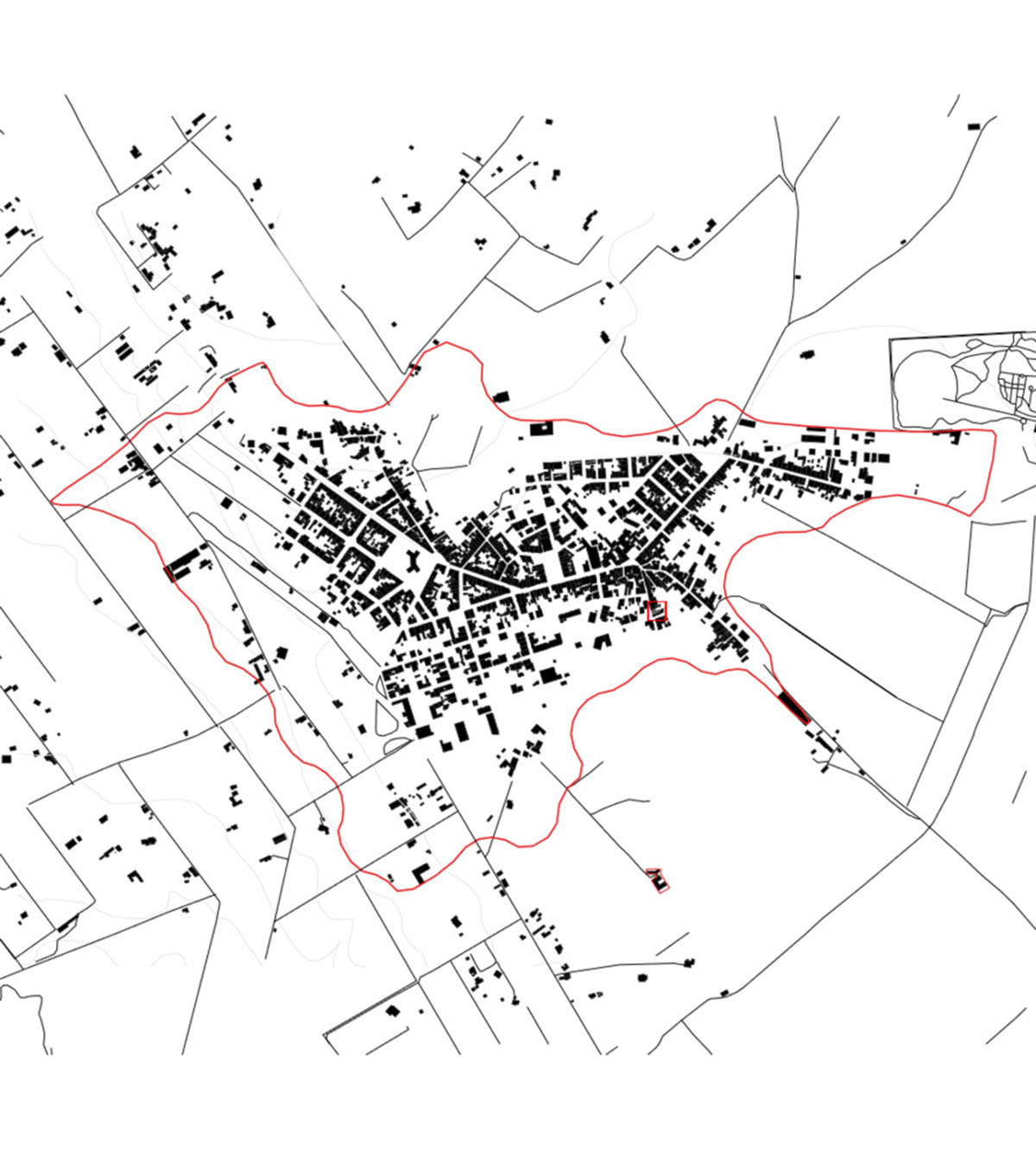 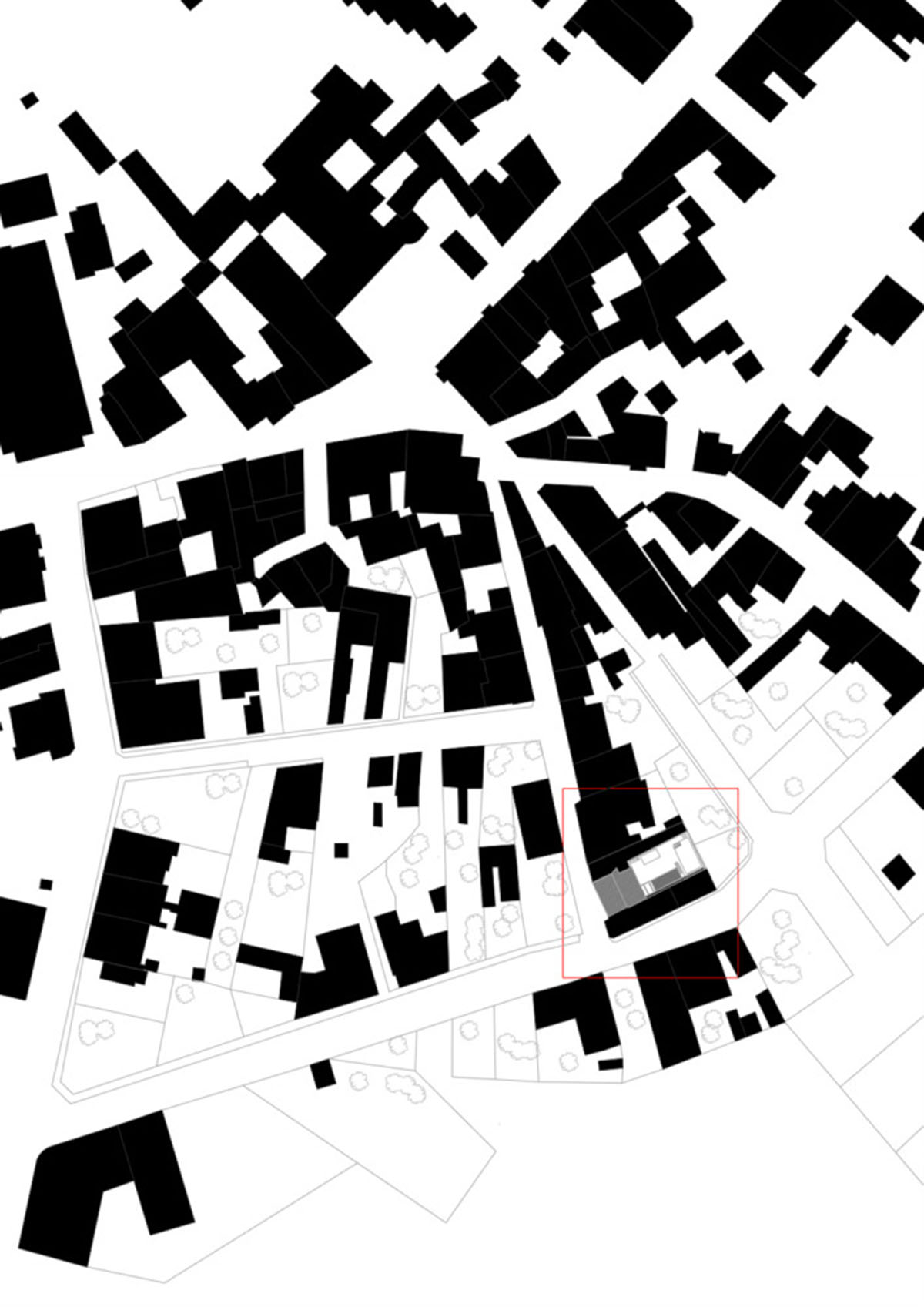 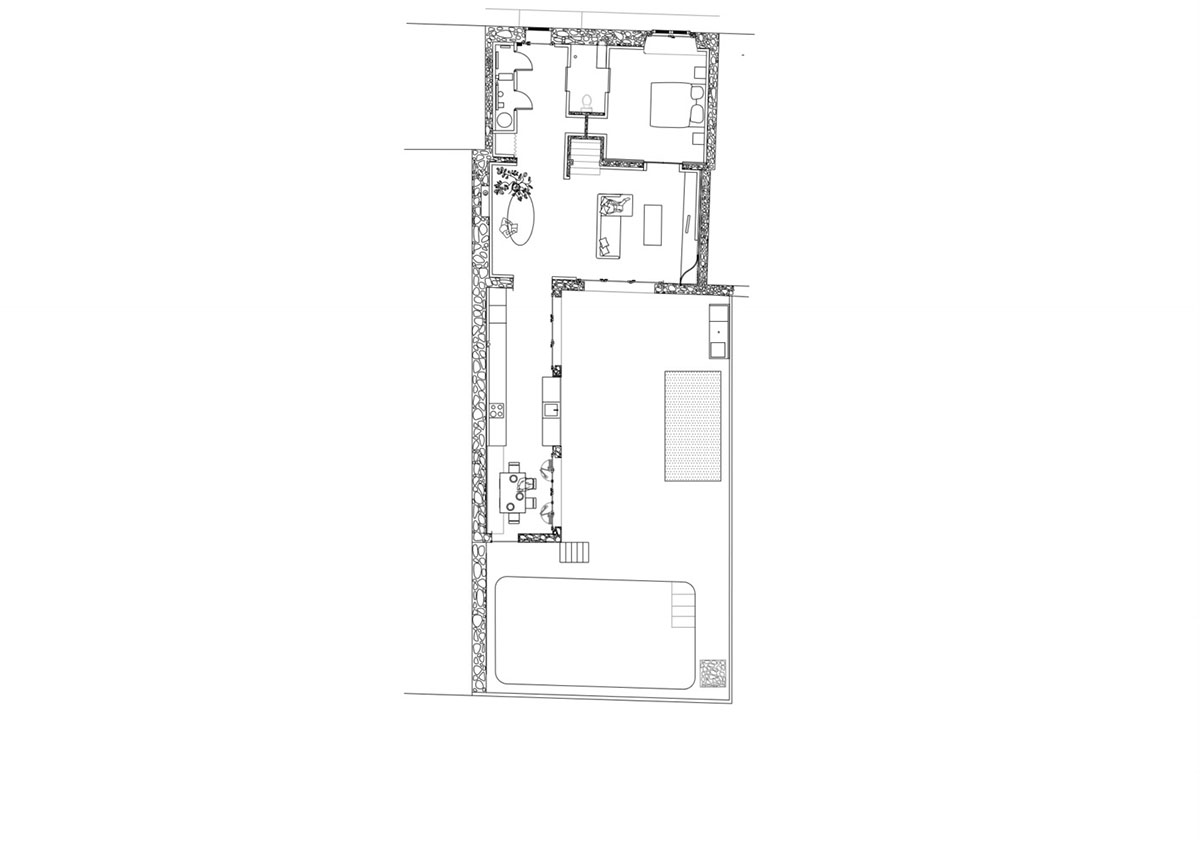 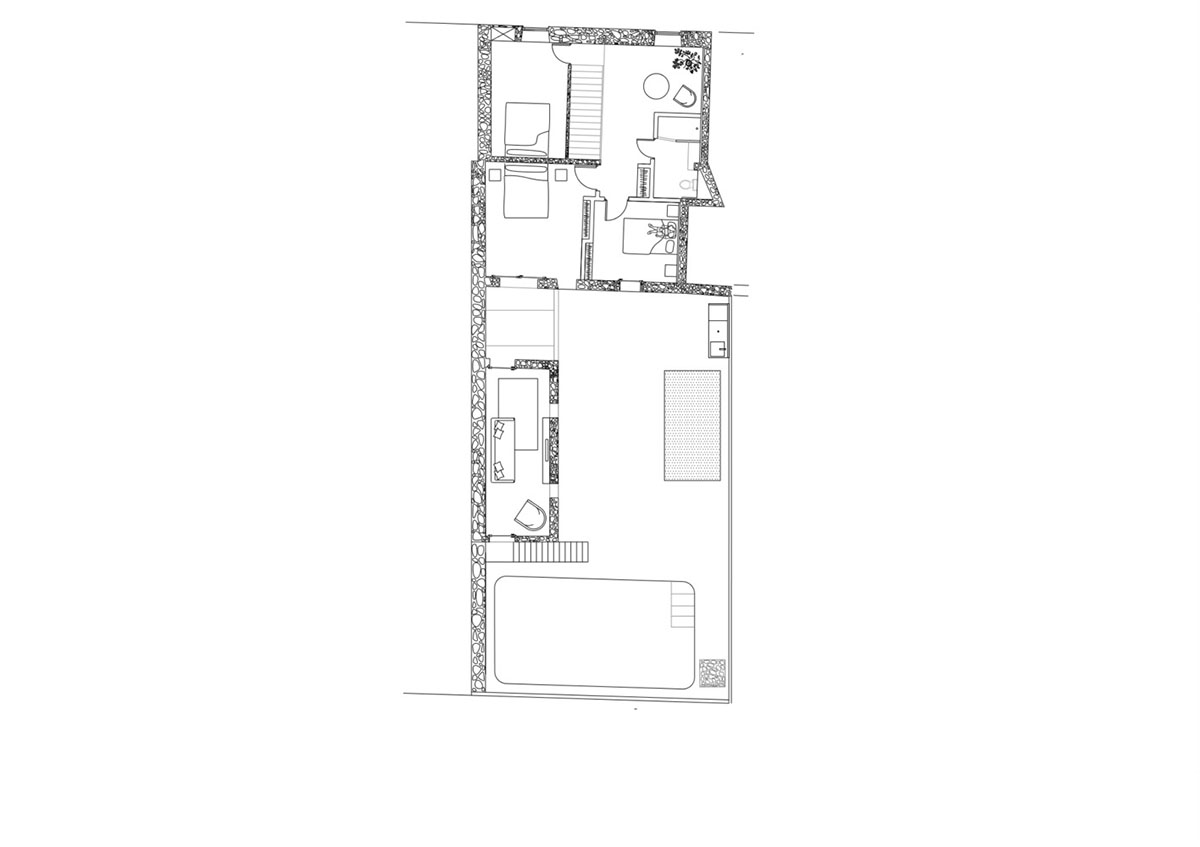 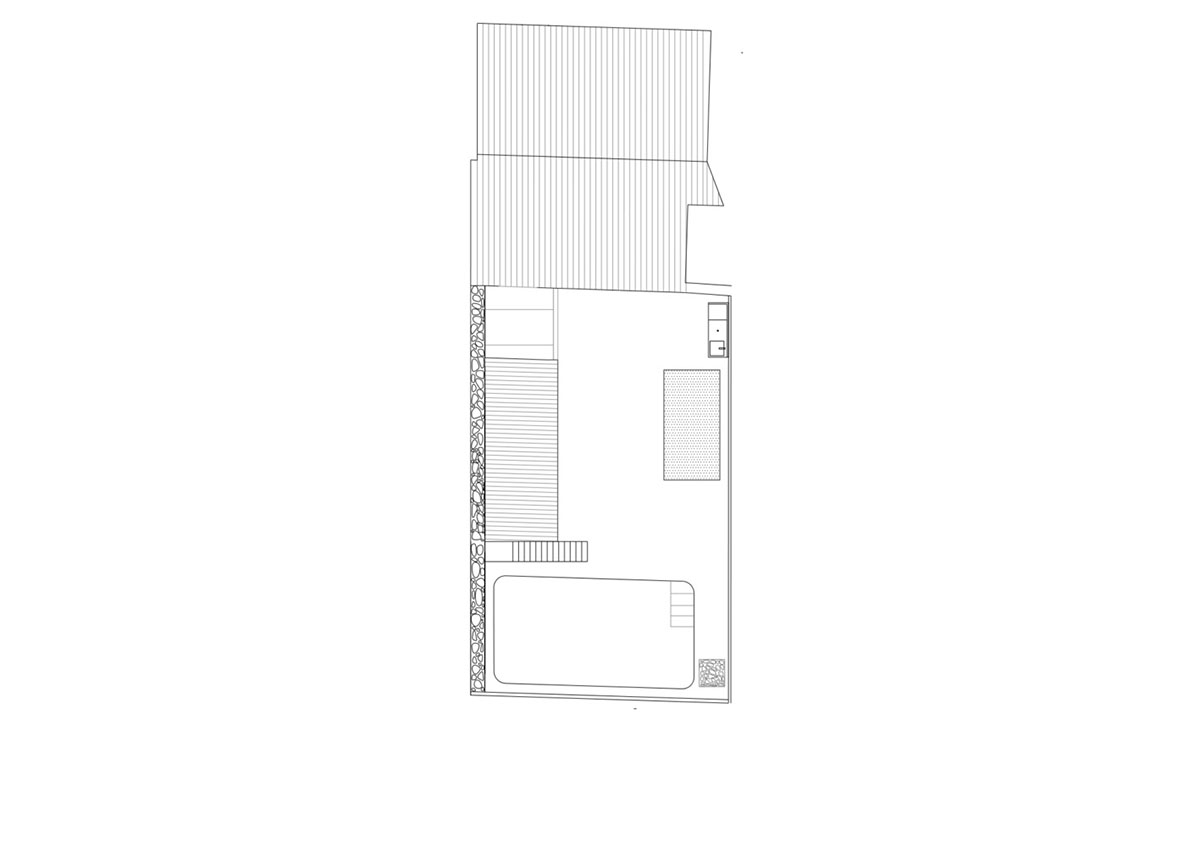 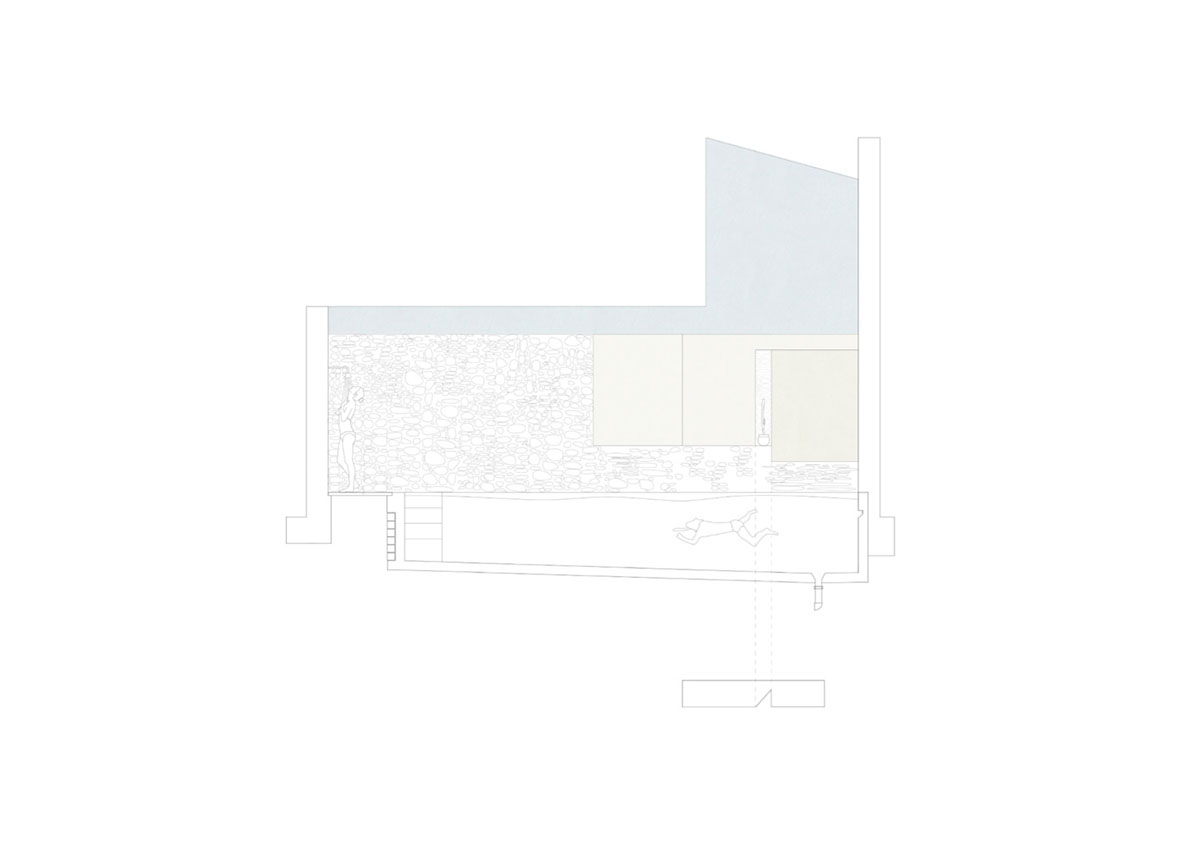 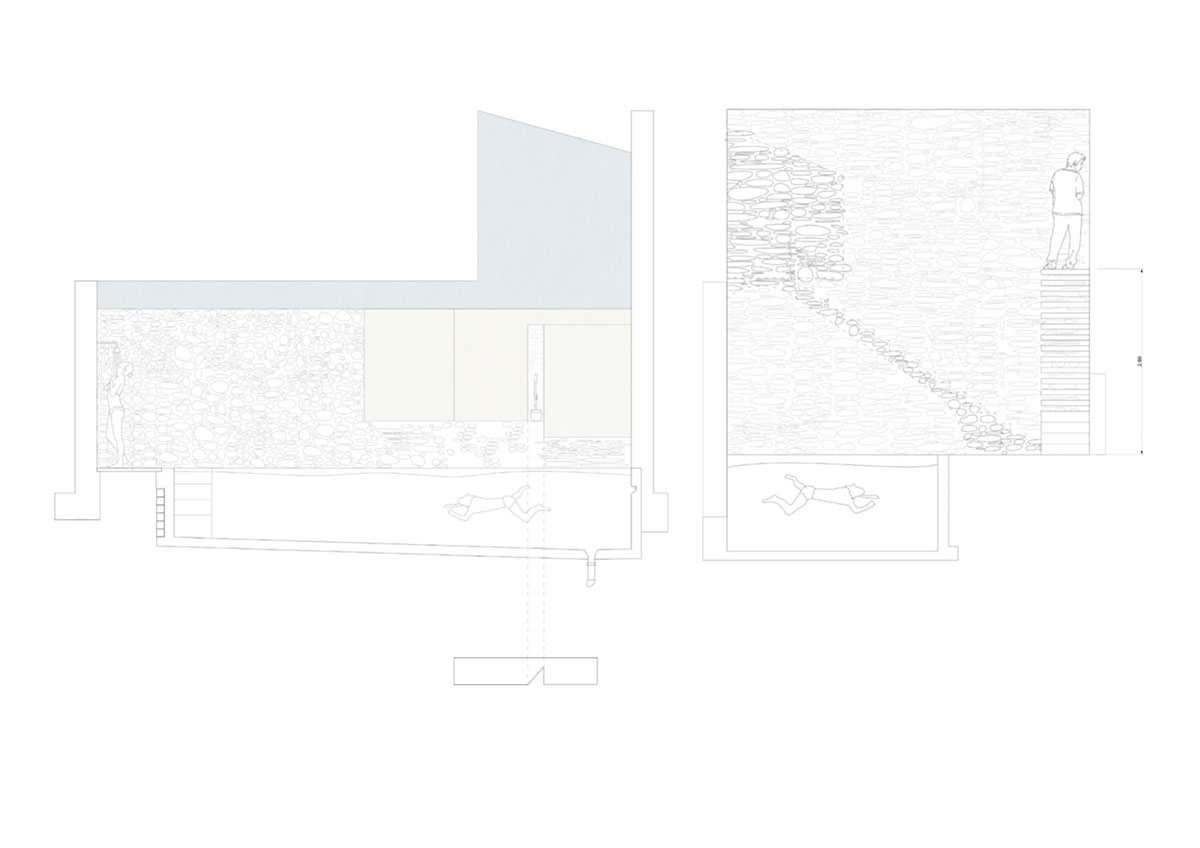 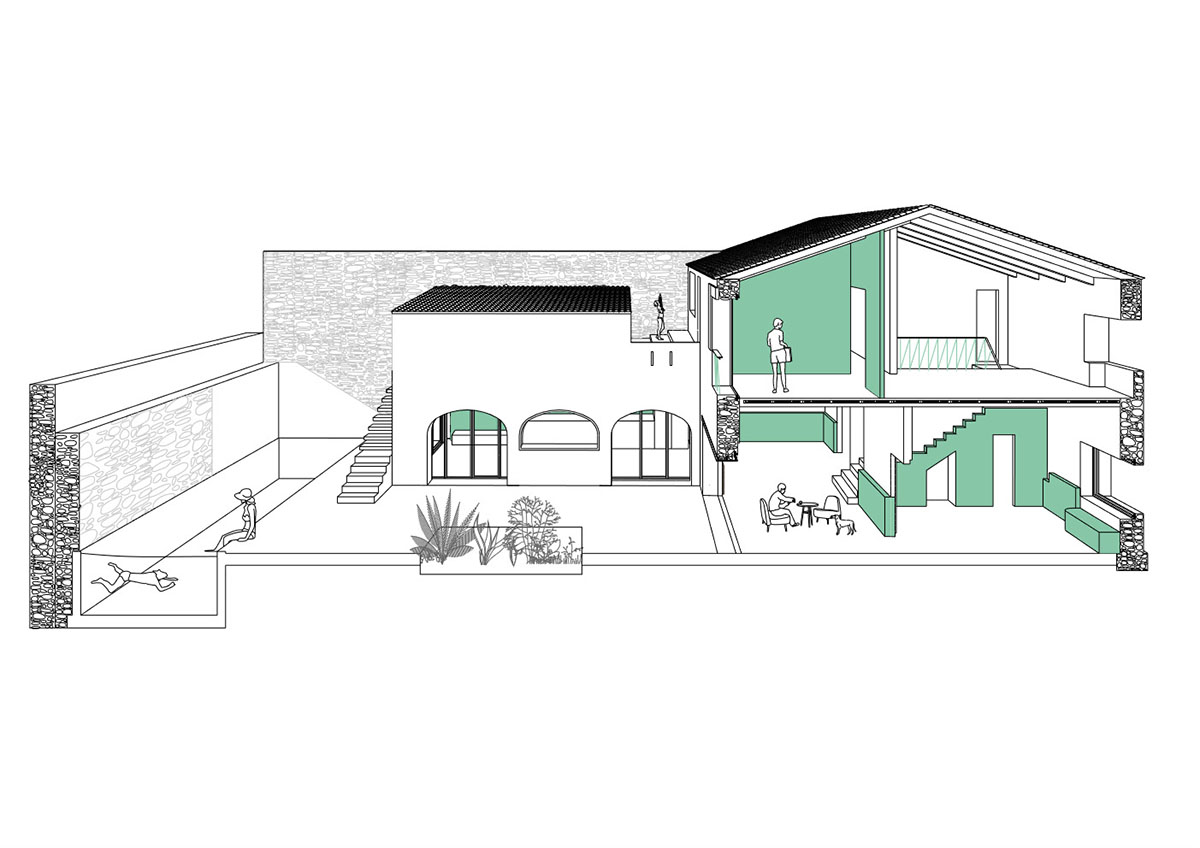 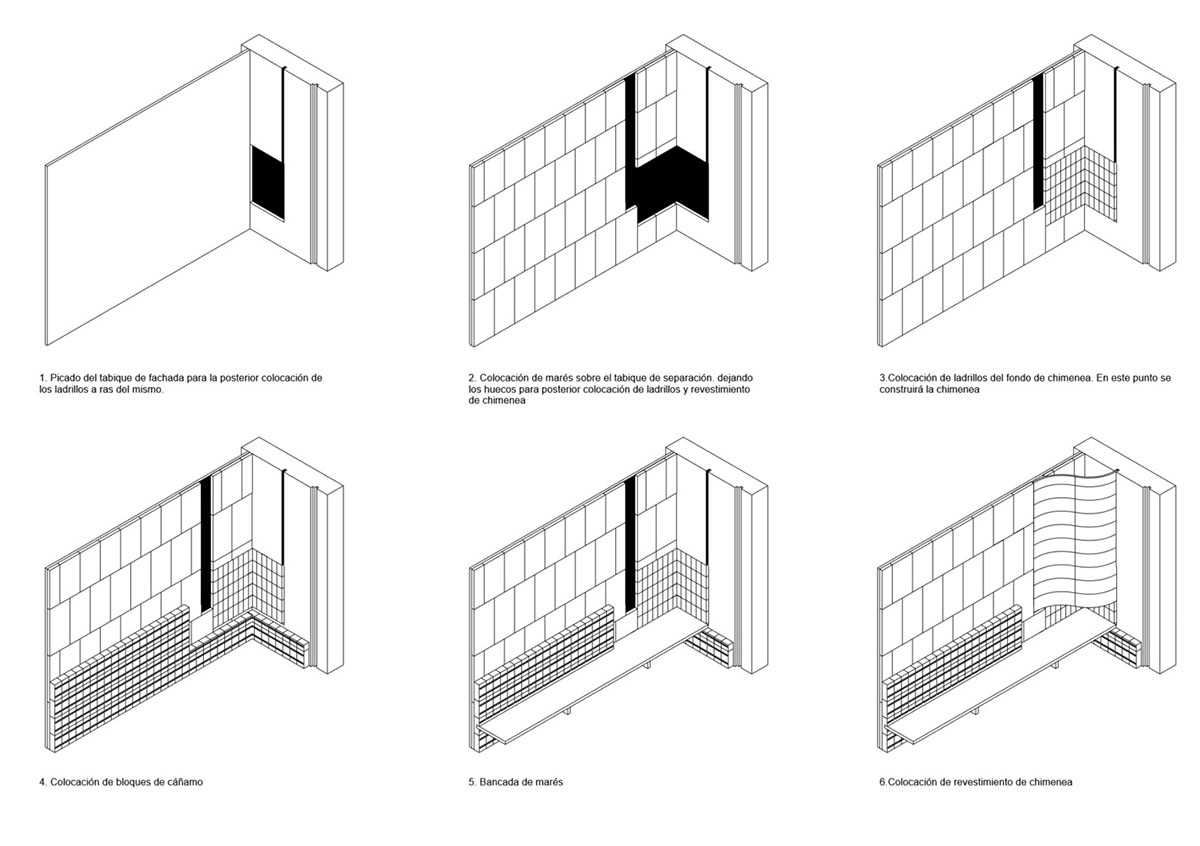