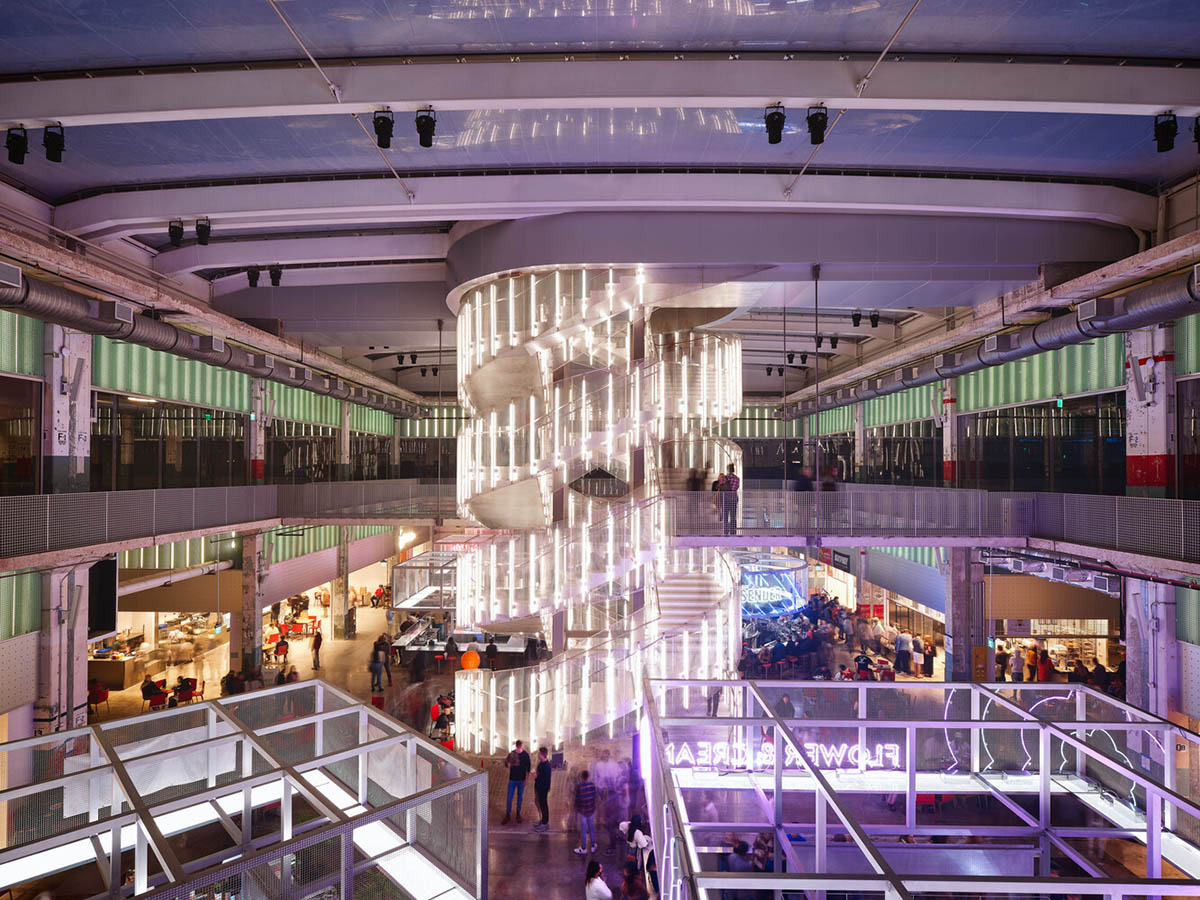 "When the USPS closed the facility in 2015, it was purchased by a local Taiwanese-American developer, Frank Liu. Other bidders had all immediately and unquestionably considered the site a potential tabula rasa, but Liu and his sons planned to keep and reimagine the warehouse. The building's scale and solidity offered potential but also posed questions and contradictions. How can we preserve it but avoid fetishizing its "industrial" character? How can we break its fortress-like relationship with its context without dismantling the building? How can we preserve its scale and aura when those qualities are precisely the elements that disaffect the building from downtown Houston? How do we tame the undifferentiated field of columns within it without creating a maze of dead-ends?," says the architecture studio OMA about their design concept.

In 2019, OMA unveiled a design to transform the historic Barbara Jordan US Postal Service building, built in 1962, into a new mixed-use cultural venue in downtown Houston, Texas, United States, previously covered by WAC. Named as POST Houston and covering over 500,000 square feet (46,500 square meters), OMA/Jason Long saw the opportunity to preserve the massive building and integrate it into downtown Houston's fabric. The design team has transformed the historic warehouse into a cultural and commercial hub while bringing a new vibrant public life through adaptive reuse and precise interventions.

The project has reached substantial completion of its first phase. The finished areas opened their doors on 13 November 2021 to approximately 40,000 visitors and invited them to explore the newly unveiled facilities. 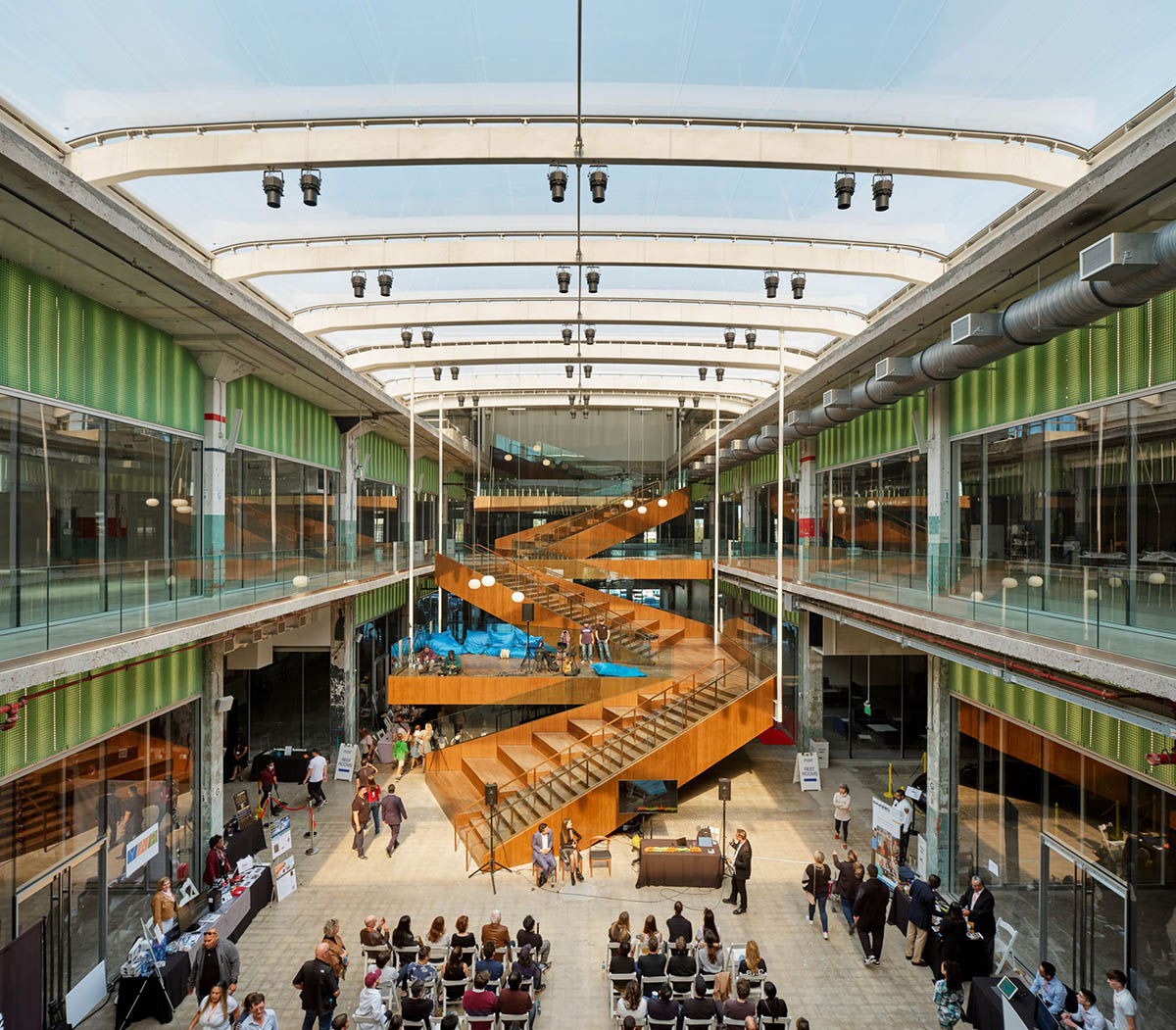 "POST Houston will be a microcosm of the diversity that makes the city itself so exciting: an agglomeration of culture, food, and tropical urbanism housed within a solid concrete shell. By cutting into the building and drawing people in and through it, we are aiming to fold different programs into every corner—weddings next to food halls next to concerts next to new ways of working—and to turn Houston into a view that reveals the city's radical ambition," said Jason Long, Partner, OMA. 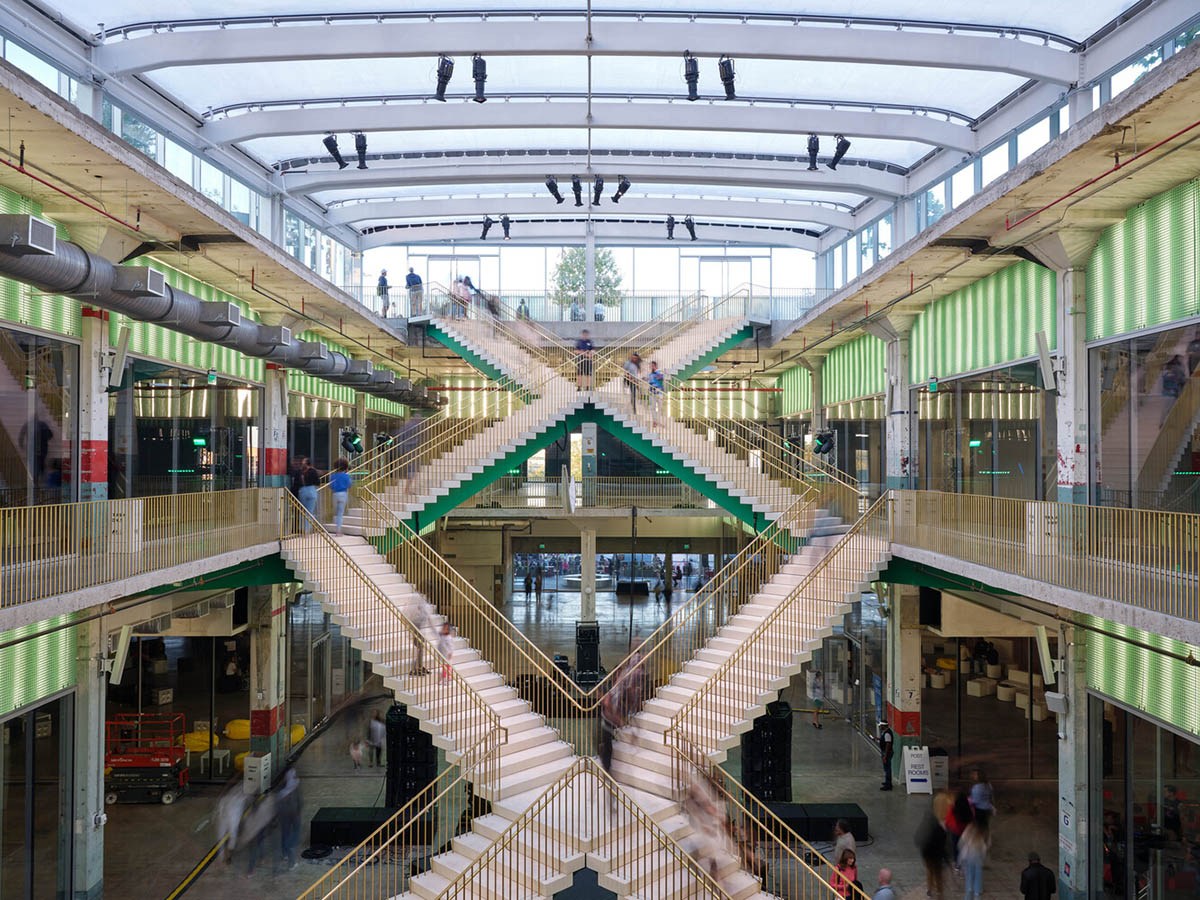 The studio designed a series of spatial and structural interventions within the former warehouse. The project houses site-specific art installations, one of the world's largest rooftop parks, farms, a concert venue, retail, and office concepts, including restaurants, bars, and flexible co-working space. To connect the 16-acre site with the downtown business and theatre districts, the team created a series of routes to the building that continue inside as voids. 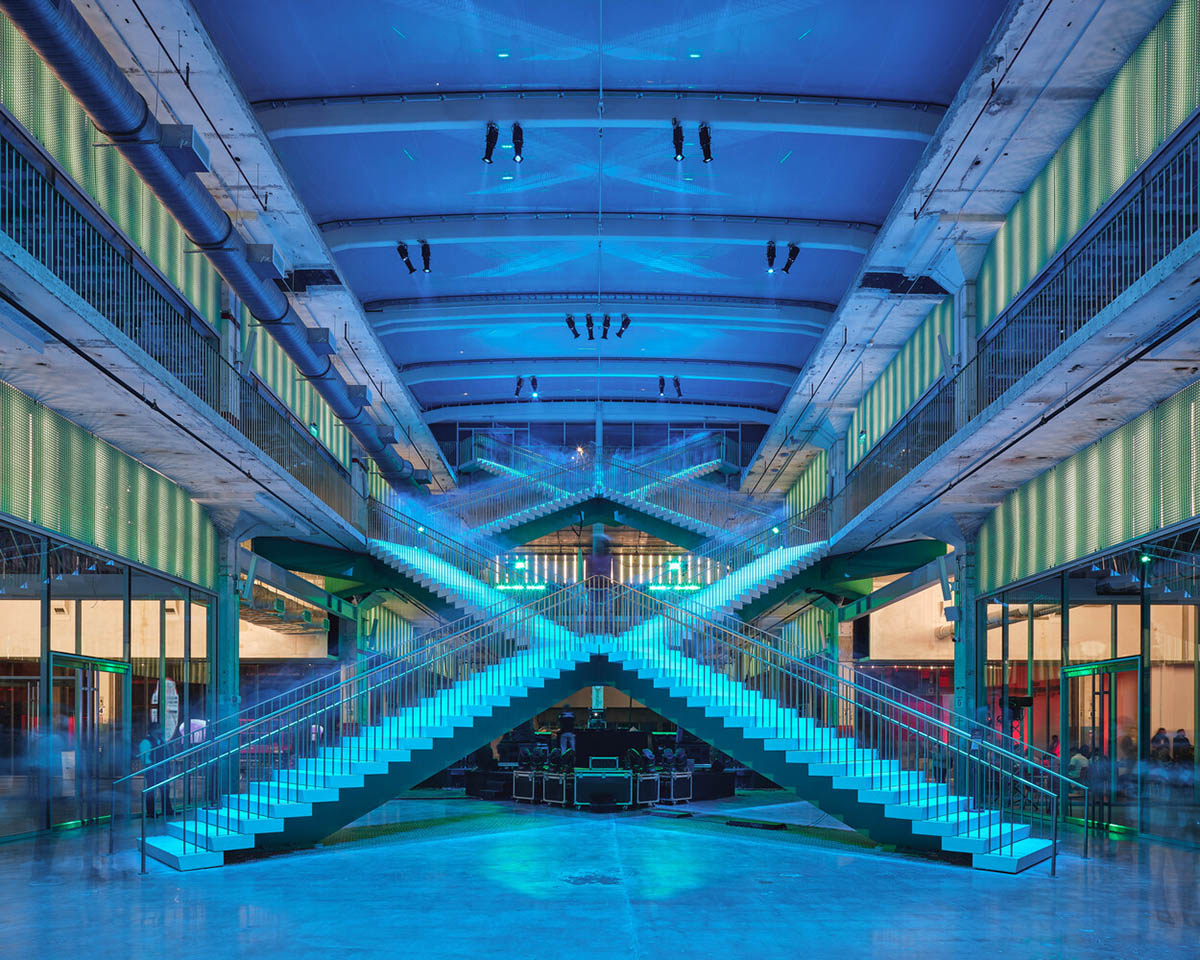 "Like farmers working on concrete soil, we raked a series of horizontal thoroughfares into and through it," said OMA.

In this first phase, three atriums—named X, O, and Z— contain a 'monumental staircase' leading visitors up to the roof-scape and vistas back to downtown, was revealed. These cut-through sections serve as large atriums that bring light into the building's deep floorplates.

"By cutting into the building and drawing people in and through it, we are aiming to fold different programs into every corner – weddings next to food halls next to concerts next to new ways of working – and to turn Houston to a view that reveals the city's radical ambition," said Long. 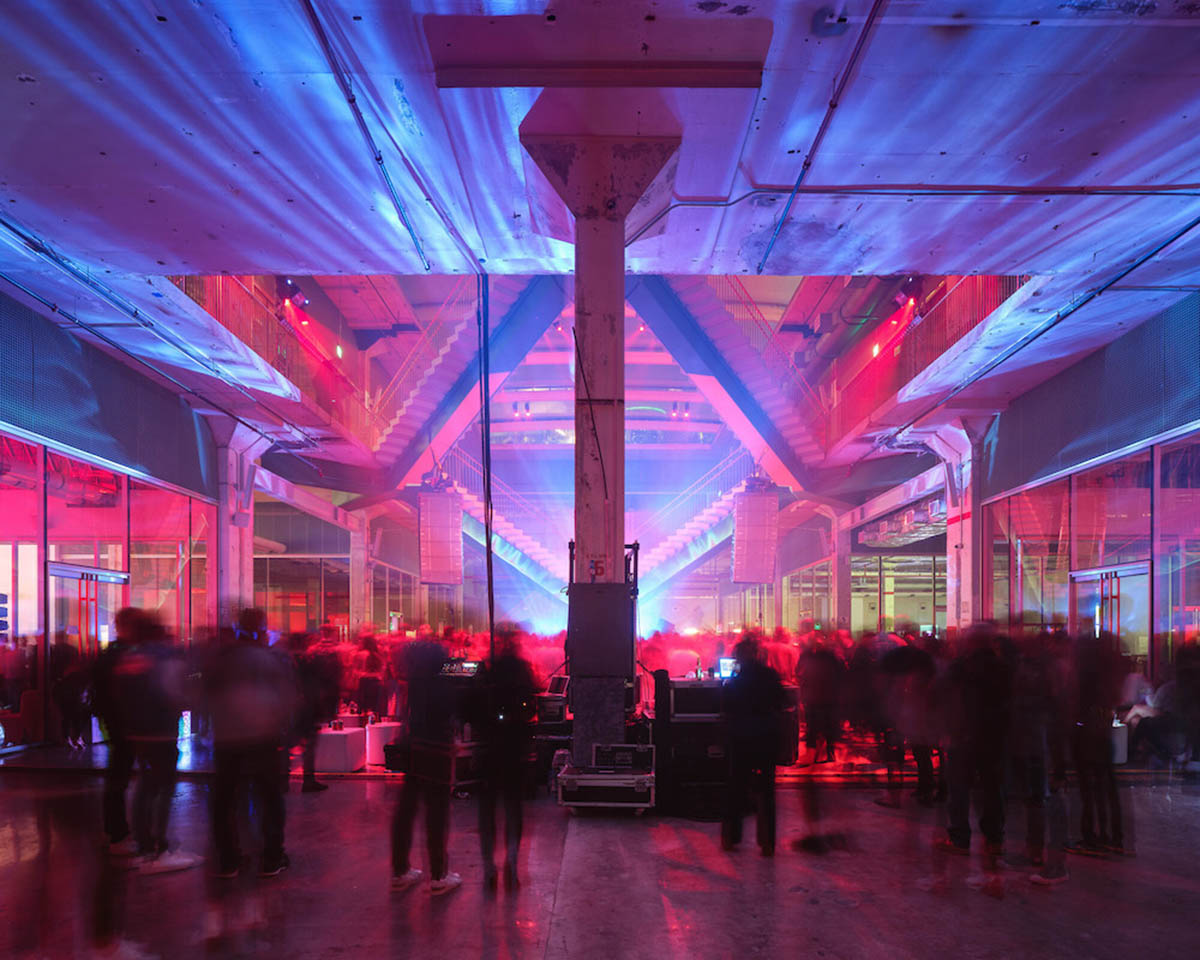 The first, wrapped in weathering steel, incorporates bleacher-style seating into its angled flights that connect a series of mezzanine platforms. Vertical light bars surround the white form of the second staircase, which spirals in a double helix around an elevator shaft. The third comprises concrete steps with green underside supports, arranged as pairs of flights that symmetrically dogleg to create two X shapes when viewed from the front. A fourth void inserted into the eastern wing forms a 5,500-capacity music venue named the 713 Music Hall. The structural intervention allows for a column-free span across the flat general assembly area while tiered seating is suspended above. 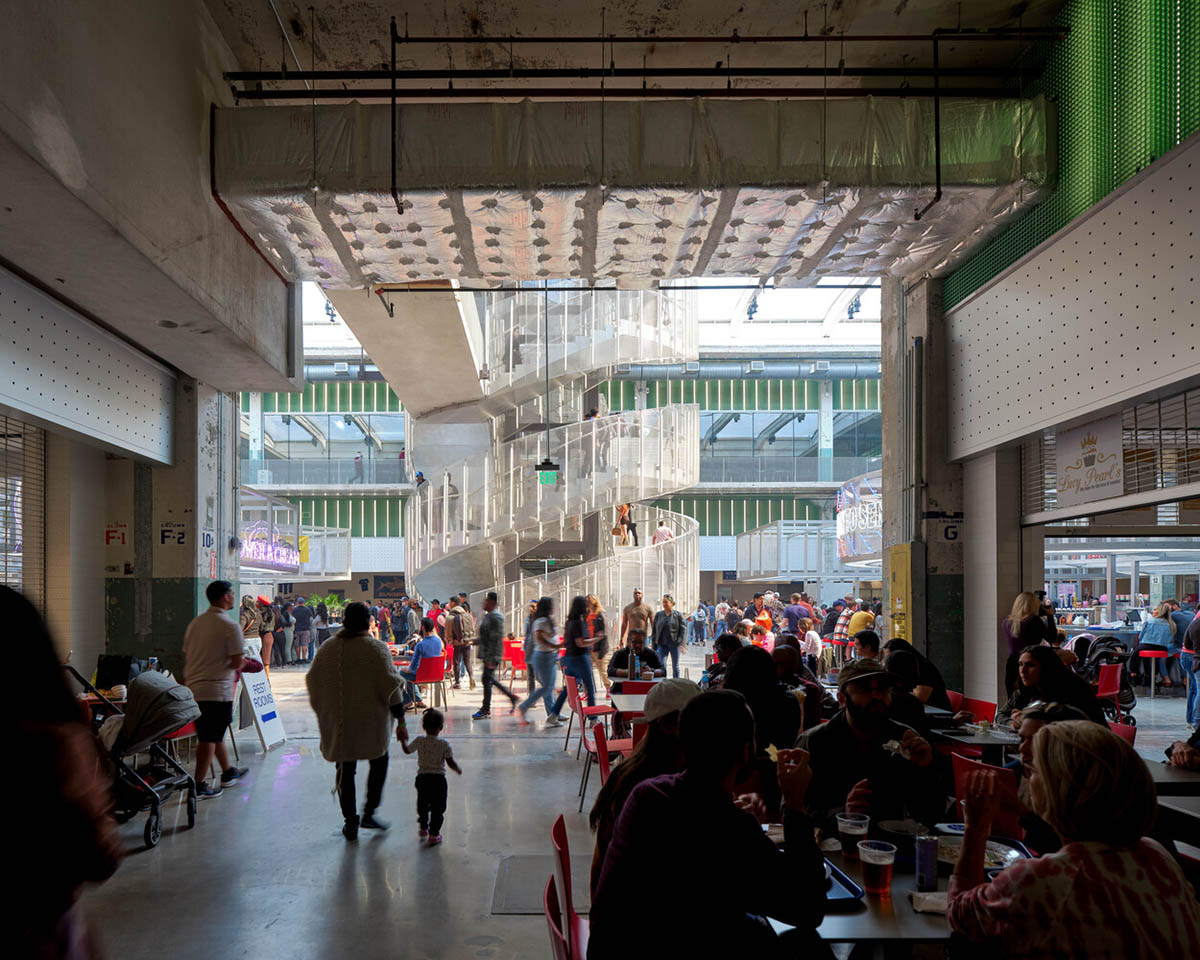 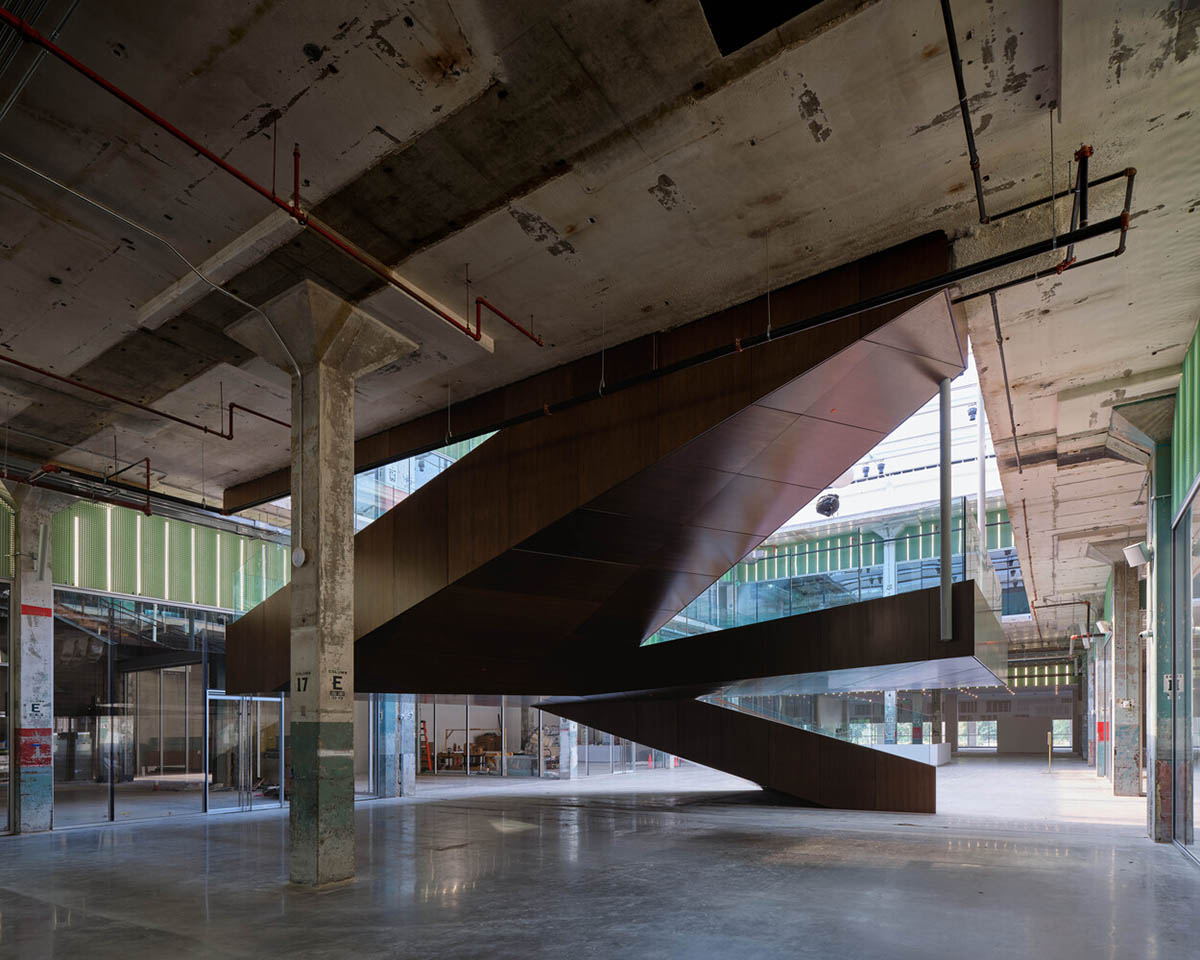 The POST Market in the O-atrium features a series of stainless steel elements like seating, counters, kitchens that create a system of kiosks of varying shapes and orientations, organized in clusters. The rooftop Skylawn features two additional restaurants and an urban farm, that together with the landscaped grove shaded gardens and recreational areas, add to the public realm of downtown Houston.

The 500,000-square-foot building now serves as a multi-purpose destination close to downtown Houston. On the roof, which boasts an impressive view of the downtown skyline, there are two additional restaurants and an urban farm, along with additional performance zones, shaded gardens, and recreation areas. 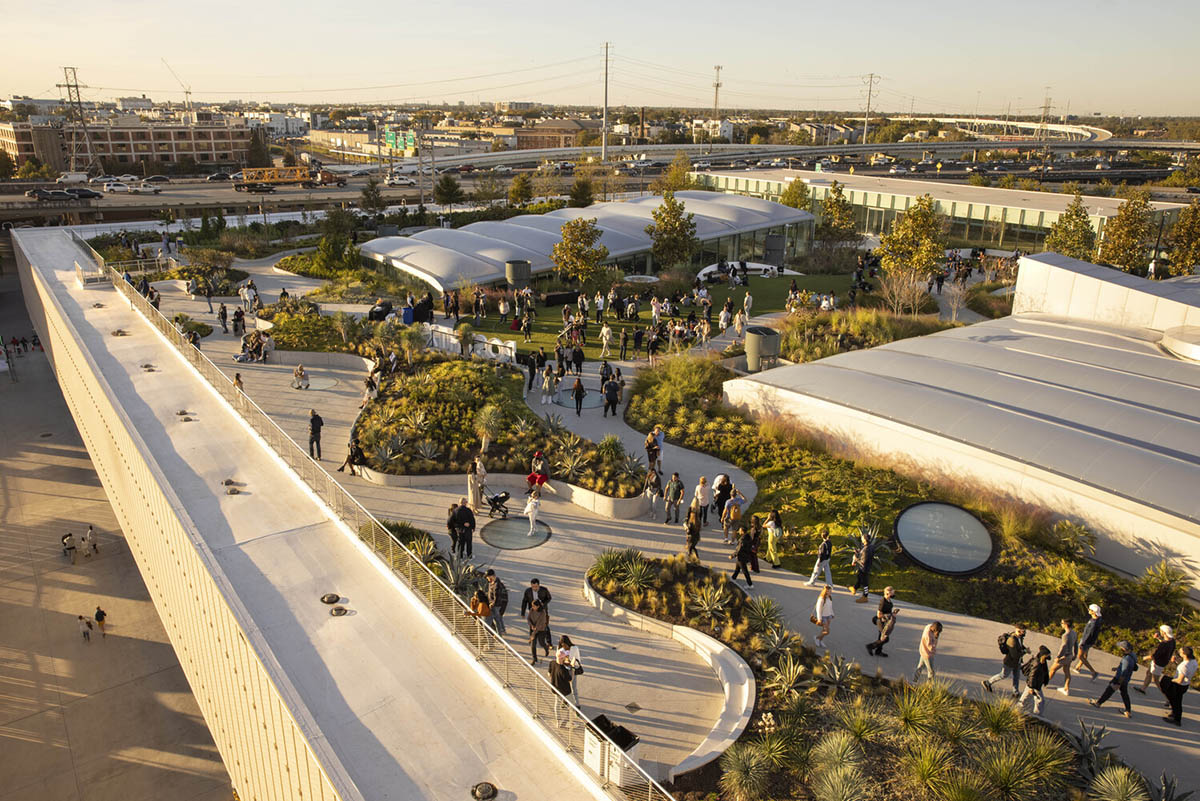 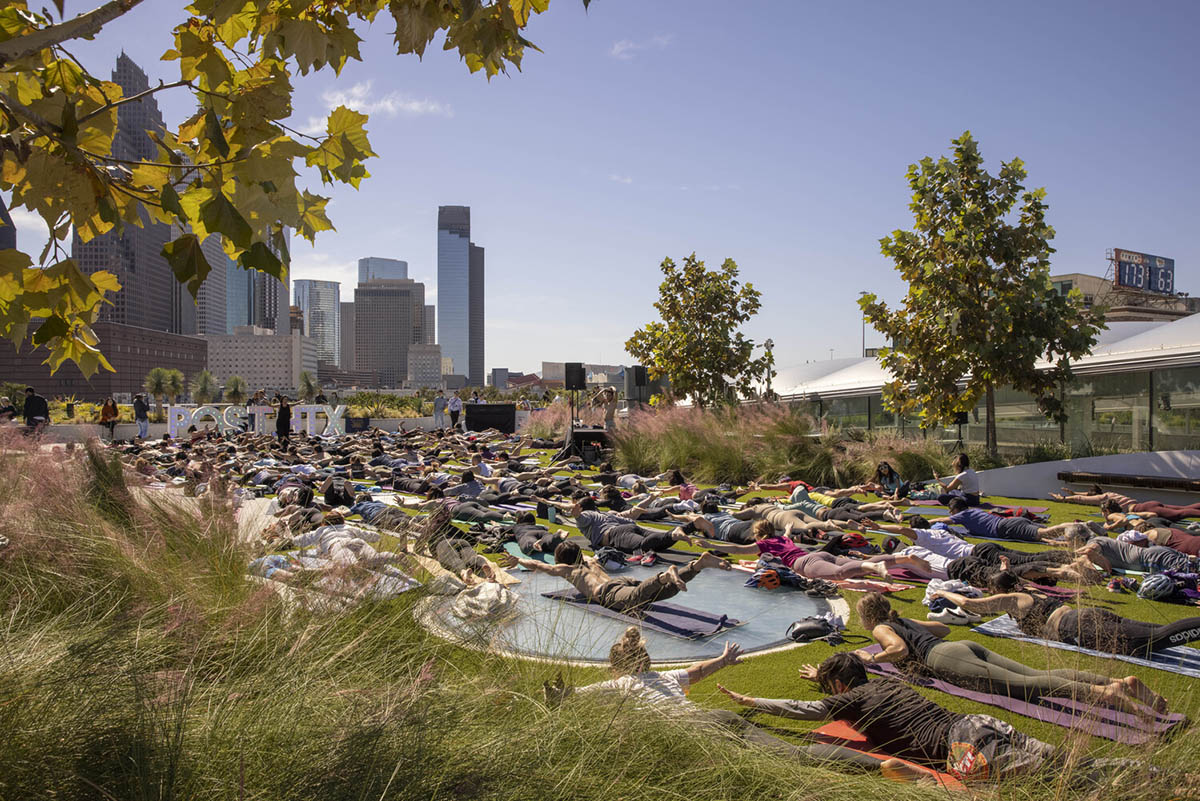