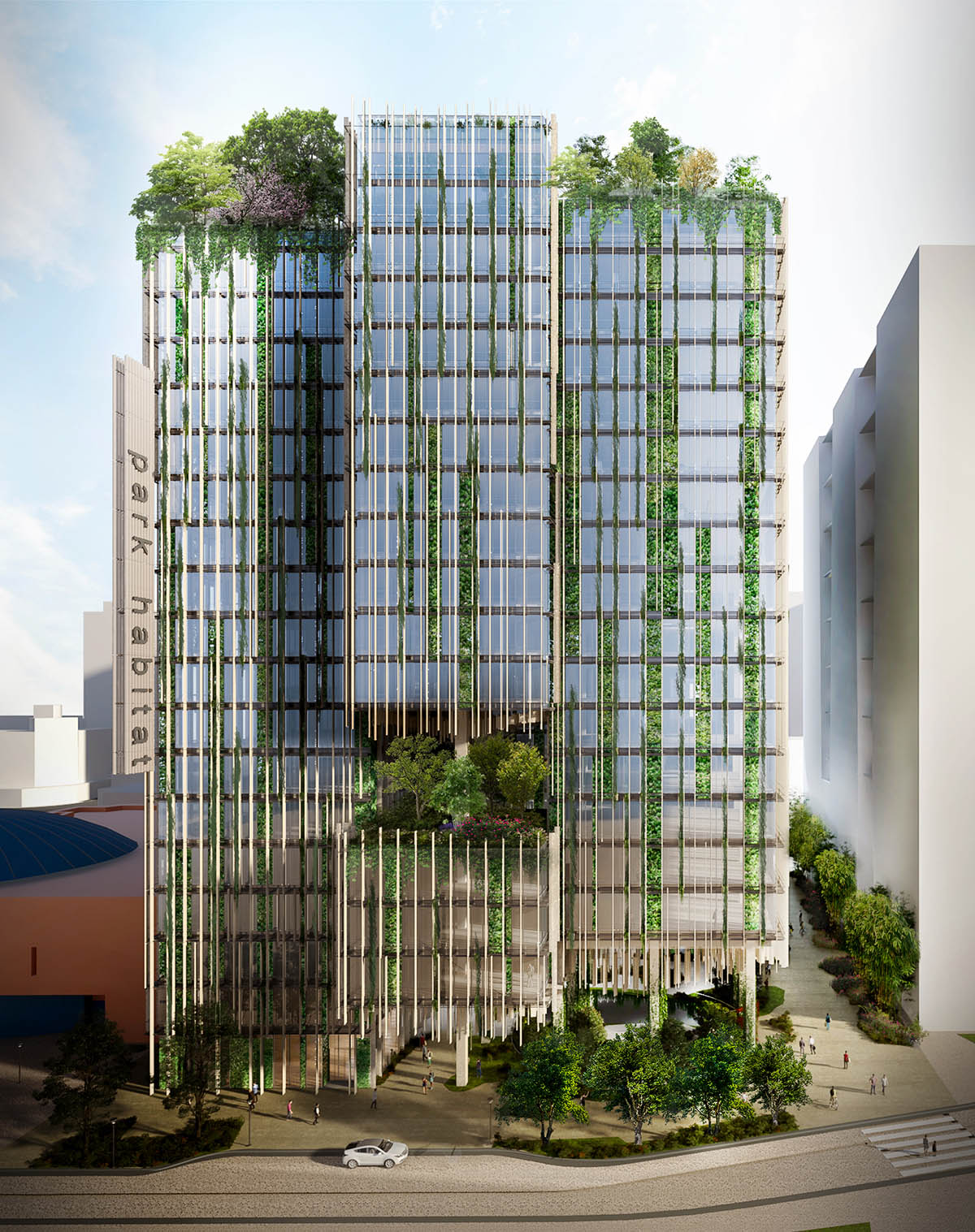 Kengo Kuma and Associates is designing a commercial building covered by vegetative elements on its façade, which will be built in downtown San Jose in the middle of Silicon Valley, California, United States.

Named Park Habitat, the 1.3 million-square-feet is developed as part of The Silicon Valley initiative which will be an overall campus masterplan developed in partnership by Westbank, Urban Community, Peterson and OPTrust.

Within the campus, other buildings include designs Bjarke Ingels Group, Studio Gang, James K.M. Cheng Architects and WRNS Studio. The Westbank Campus will comprise seven buildings that will be led by high-profile international architects.

With a collection of seven buildings, the Westbank Campus aims to achieve net zero carbon lifecycle for both operational and embodied carbon. 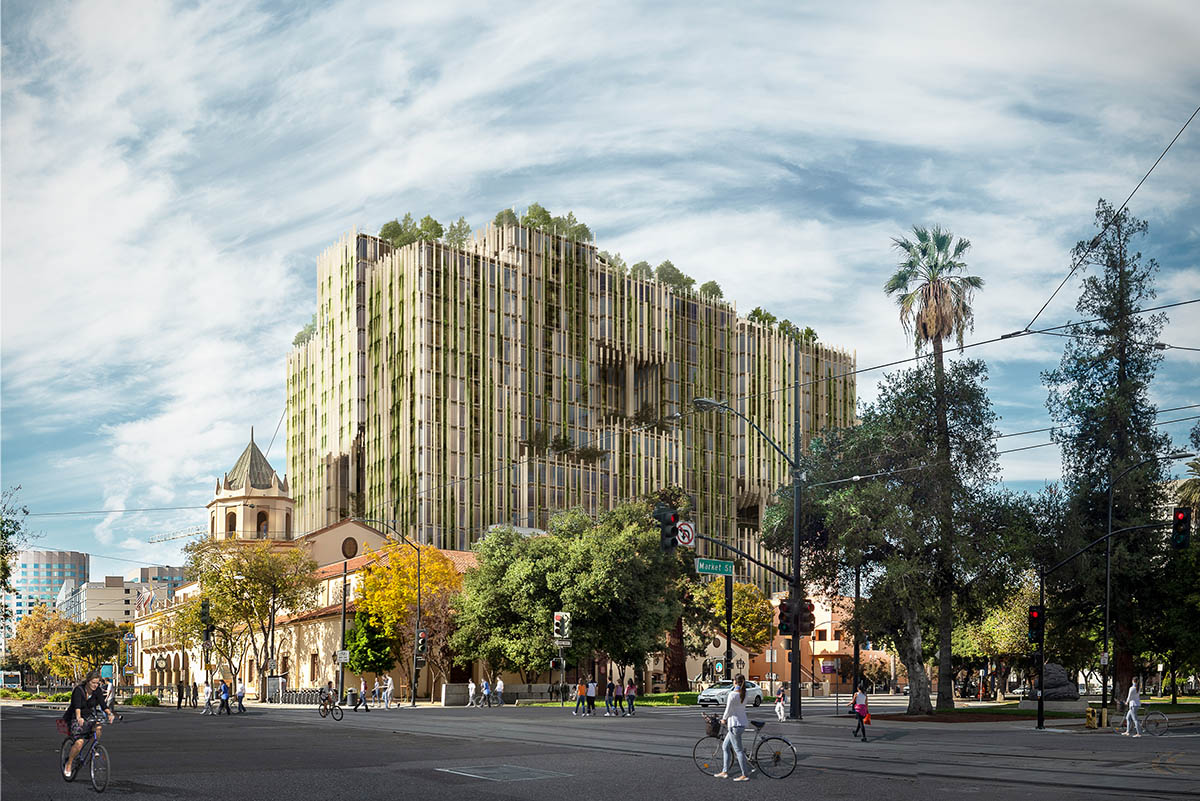 Kengo Kuma's building will be located at 180 Park Avenue in downtown San Jose and will be a commercial building with retail spaces at grade and an expansion space for the adjacent Tech Interactive as well as office above grade with an amenity rooftop.

The 20-storey Park Habitat has begun construction On Earth Day and broken ground as the first project of the campus masterplan to be constructed in a largescale net zero initiative in downtown San Jose. 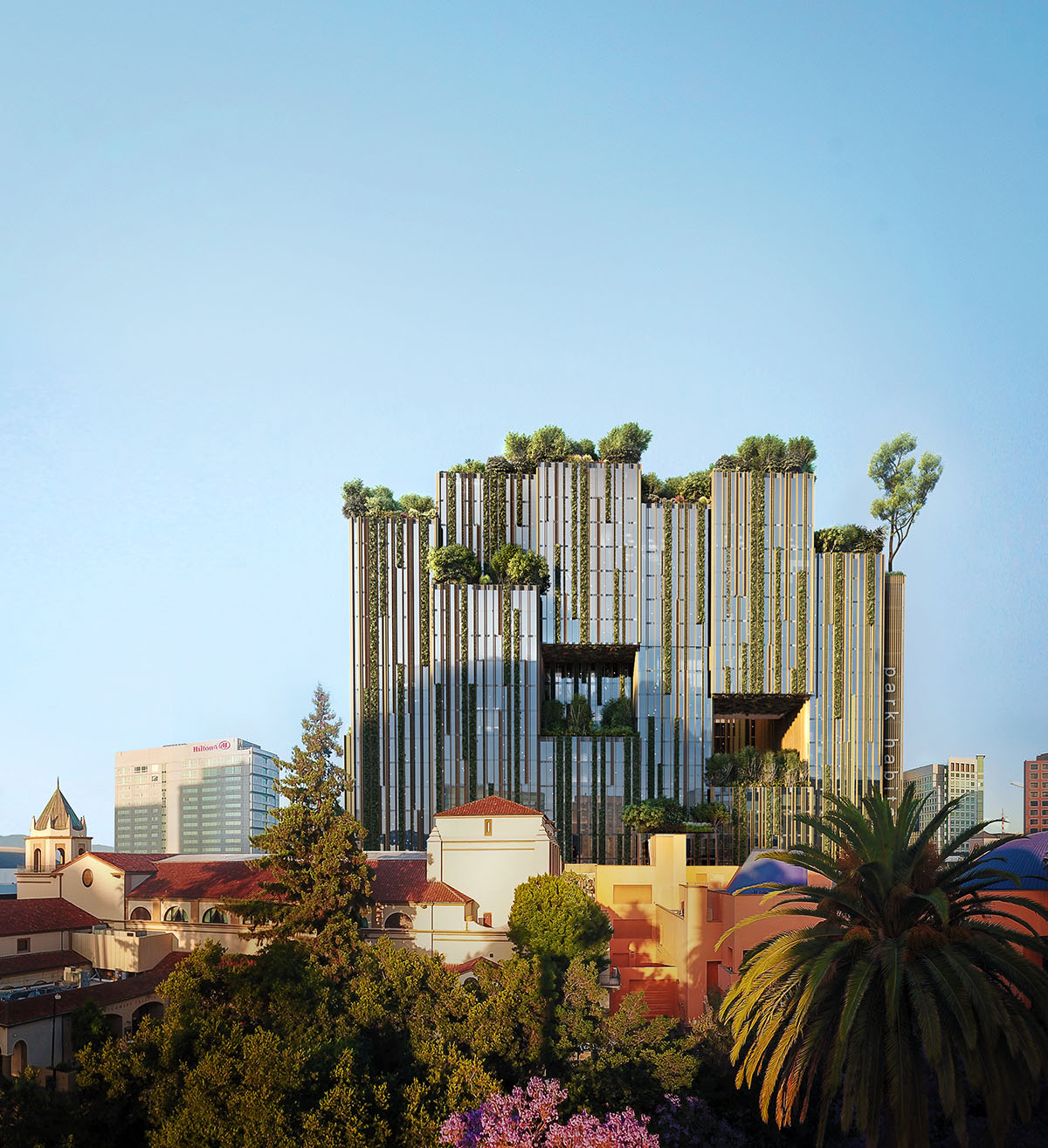 Park Habitat project will create a low-carbon workspace and retail, as well as an expansion space for the adjacent Tech Interactive. Kuma's design, which is described as "the most sustainable buildings of its kind", aims to achieve net zero carbon across its lifecycle. 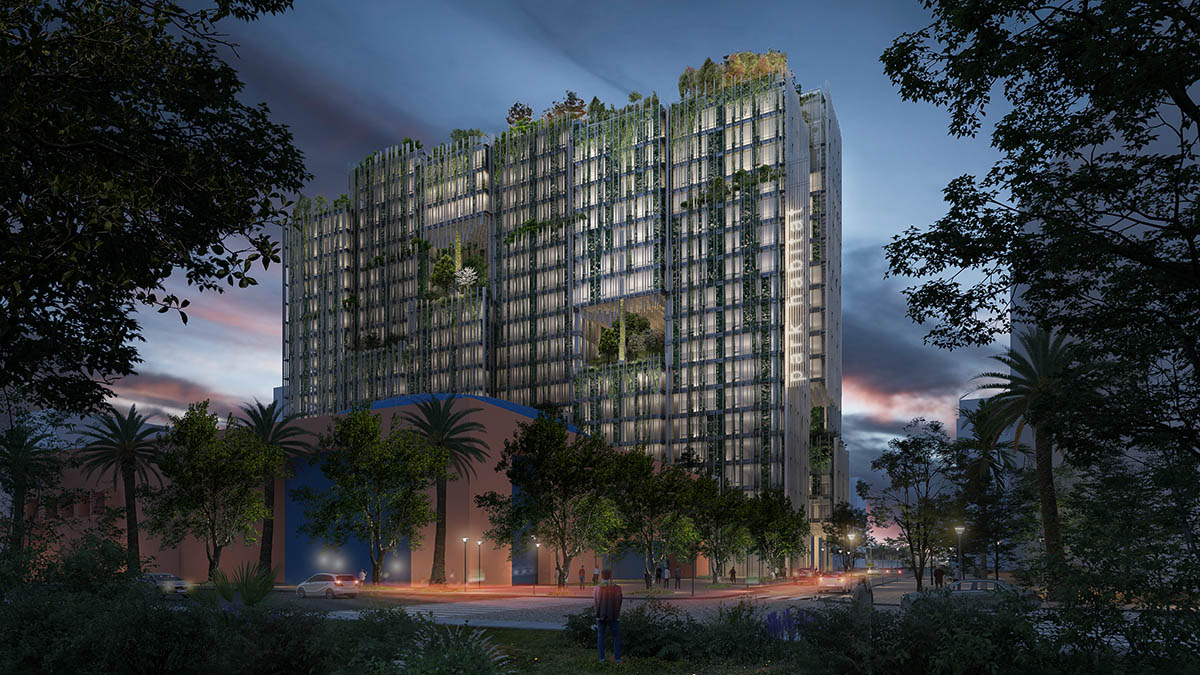 The design is distinguished with its high-performance façade, water reuse, landscape and wetland integration and features a "green-lung" atrium for natural ventilation and light throughout.

The architect creates a responsive and a living facade integrating extensive vertical vegetation as well as sun-shading louvers.

The team uses plantings including vegetated walls mounted directly to the glass curtain wall as well as window box-style planters with vines on vertical wire trellises.

"The vegetation in these planters acts as sun shading for the glass behind and is visible to the building occupants as a biophilic amenity for enhanced air quality inside the building," stated a project description on the Westbank Campus' website.

"To reduce embodied and operational carbon to the greatest extent possible, the project will leverage low-carbon building materials, and connect to an all-electric district energy system developed by Creative Energy," described in a project description.

"Any remaining carbon emissions will be mitigated through on-site renewable energy generation and local, high-quality offsets. From an emissions perspective, it will be as if Park Habitat was never constructed," added the press release. 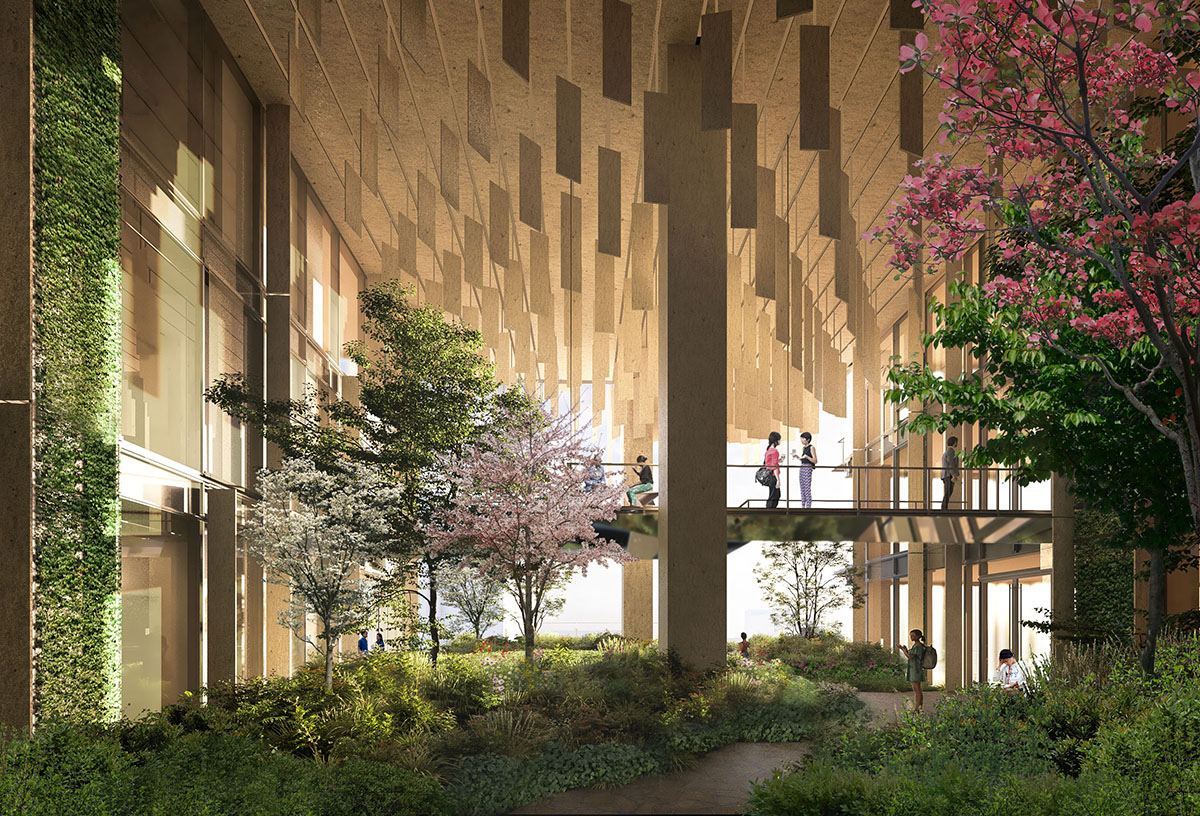 The window-to-wall ratio is approximately 60 per cent on the project and spacing of the louvers, extents of the planters and extents of the media wall are changing across the facade according to the solar exposure of each aspect of the building.

“San Jose has emerged as the natural future hub for Silicon Valley and the ingredients needed for intelligent city-building have converged there, creating the opportunity for a new typology," said Westbank founder, Ian Gillespie.

"At this moment in history, it’s time we question the basic building blocks of our communities."

"We are destroying the environment we depend on, we are spending hours a day commuting, our work environments are uninspiring and unhealthy and so is much of our housing."

"Our initiative in San Jose is part of our commitment to cities and to creating healthier, more sustainable communities within them. We believe this has never been more important and that all of us have a role to play in this endeavor," Ian Gillespie added. 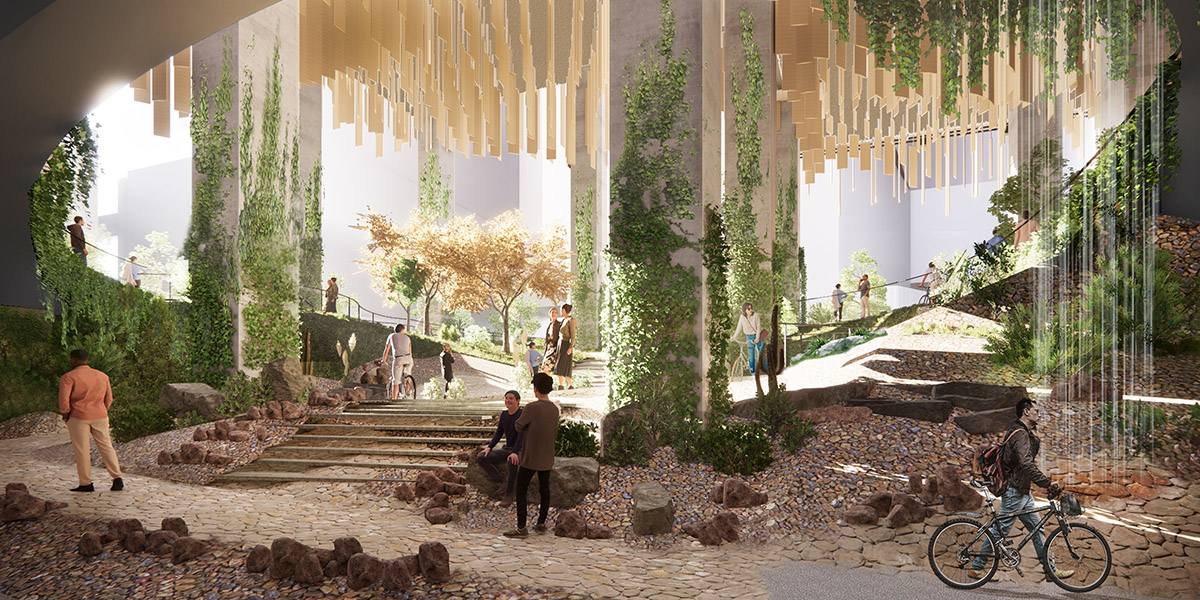 "San Jose presents the opportunity to demonstrate to the world that the solutions to our greatest challenges can be achieved by helping our cities live up to their full potential. Our Park Habitat project marks a starting point in what we hope will become a broader contribution to Silicon Valley as a whole," Ian Gillespie continued.

"At Park Habitat, the intent was clear from the onset. For our first significant project in Silicon Valley I chose Kengo Kuma for a very deliberate reason: Kuma-San has risen to the pinnacle of his profession by blurring the lines between nature and the built environment."

"His practice is dedicated to making buildings less definitive or solid and more ephemeral. In essence, creating a particular condition more than a particular architecture," Gillespie explained. The project is described as a living structure, incorporating deep sustainability and natural elements with workspace, public realm space and cultural programming.

The project is aimed to "breathe" with an outsized vertical courtyard, called the Green Lung, which will provide natural ventilation and cooling. 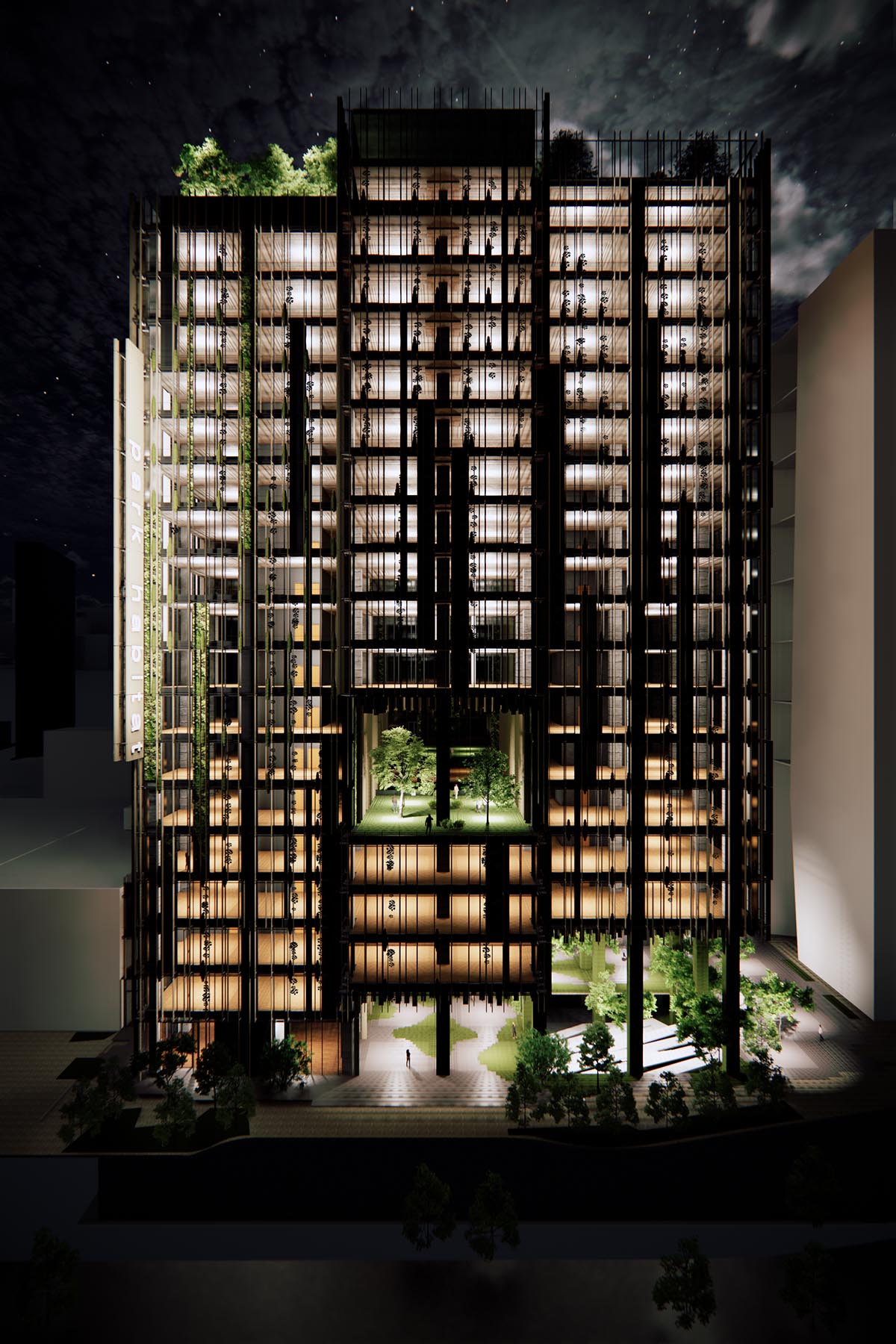 Other natural design elements include pockets gardens, a rooftop forest and a unique vegetative façade giving life to the building, while providing access to nature and the outdoors to occupants.

Construction on Park Habitat has commenced, and the project is set to be completed in 2025. Adamson Associates Architects will serve as the executive architect on the project.

All renderings by Kengo Kuma and Associates, courtesy of Westbank unless otherwise stated.

Rustic Canyon designed by Walker Workshop features light-filled and creamy interiors in Los Angeles
May 13, 2022 • 1253
World Architecture Festival and World Festival Of Interiors open for entries for Its 2022 edition
May 09, 2022 • 1037
Morphosis' University of Texas, a new arts campus breaks ground at Dallas
May 12, 2022 • 1018
Büro Ole Scheeren designs octagonal super-tall skyscraper in China
May 06, 2022 • 867
Field Conforming Studio installs steel sculpture with nine hollow columns in Tangshan
May 11, 2022 • 790
JKMM Architects transforms former buildings into a new building for University of the Arts Helsinki
May 11, 2022 • 768