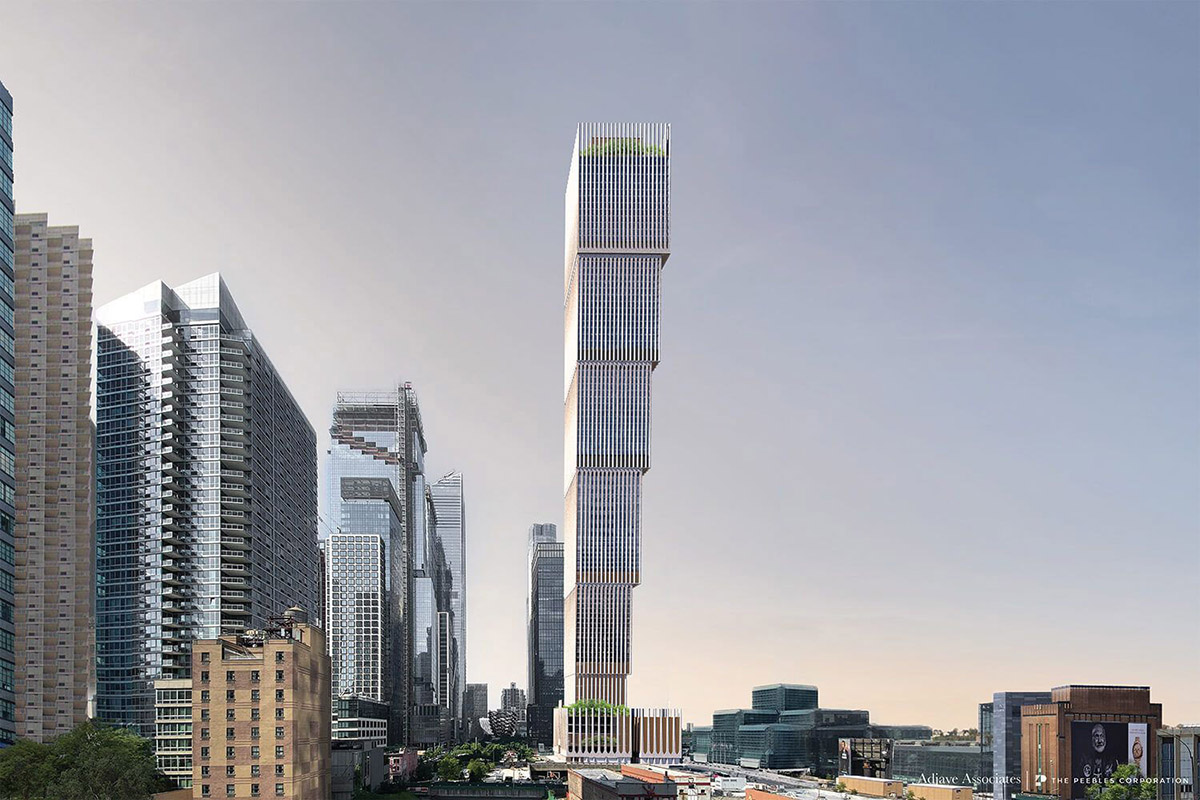 Called Affirmation Tower, the 498-metre-tall (1,663-feet) skyscraper is proposed for a vacant plot at 418 11th Avenue where the site is directly across from the Jacob K. Javits Center in Manhattan between West 35th and West 36th Streets.

Called Site K, the local developer The Peebles Corporation has submitted a Request for Proposals (RFP) in order to build the skyscraper at a 1.2-acre site.

If built, the project would be the studio's tallest skyscraper to date and would be the tallest building in New York City, and the entire Western Hemisphere. 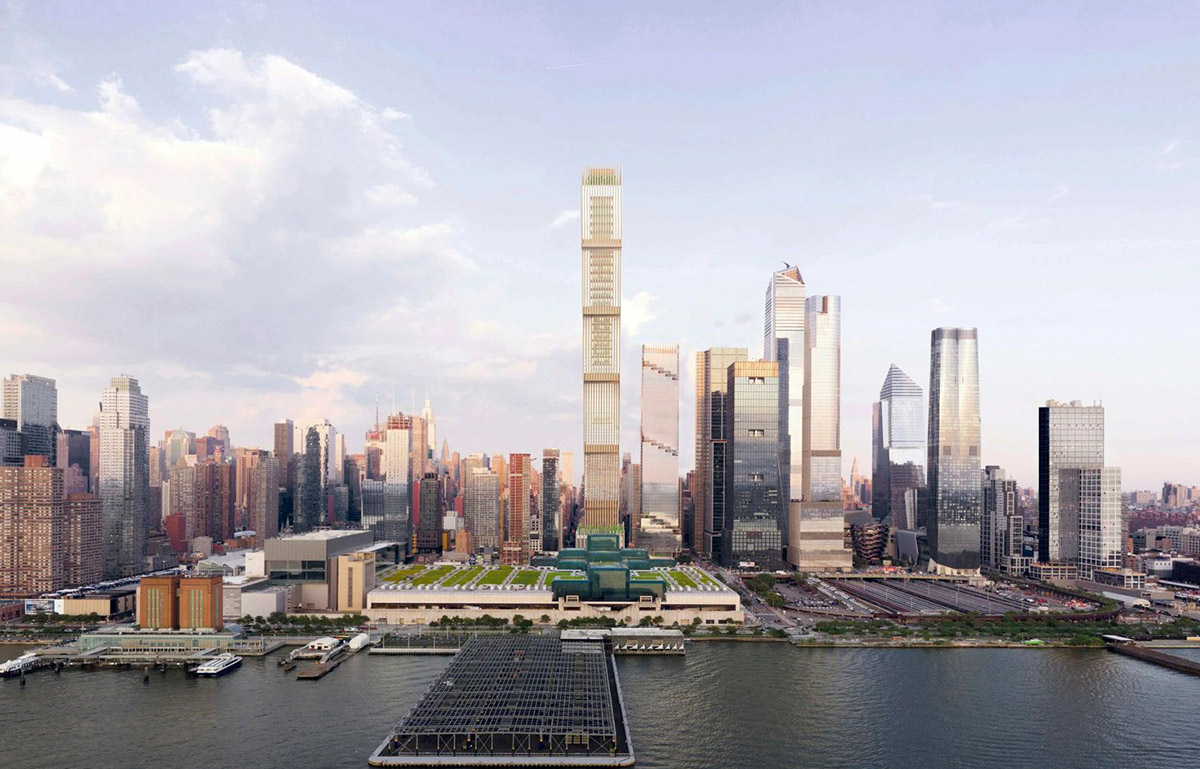 As first reported by Real Estate Weekly on October 13, the tower doesn't have any residential units - instead there are plans to include two hotels, an observation deck and skating rink and commercial office spaces to house the headquarters of NAACP, a civil rights organization in the United States.

If everything goes on a plan and the tower is built, it will be the major skyscraper project designed entirely by a team of Black architects, developers, builders and lenders in New York's history. 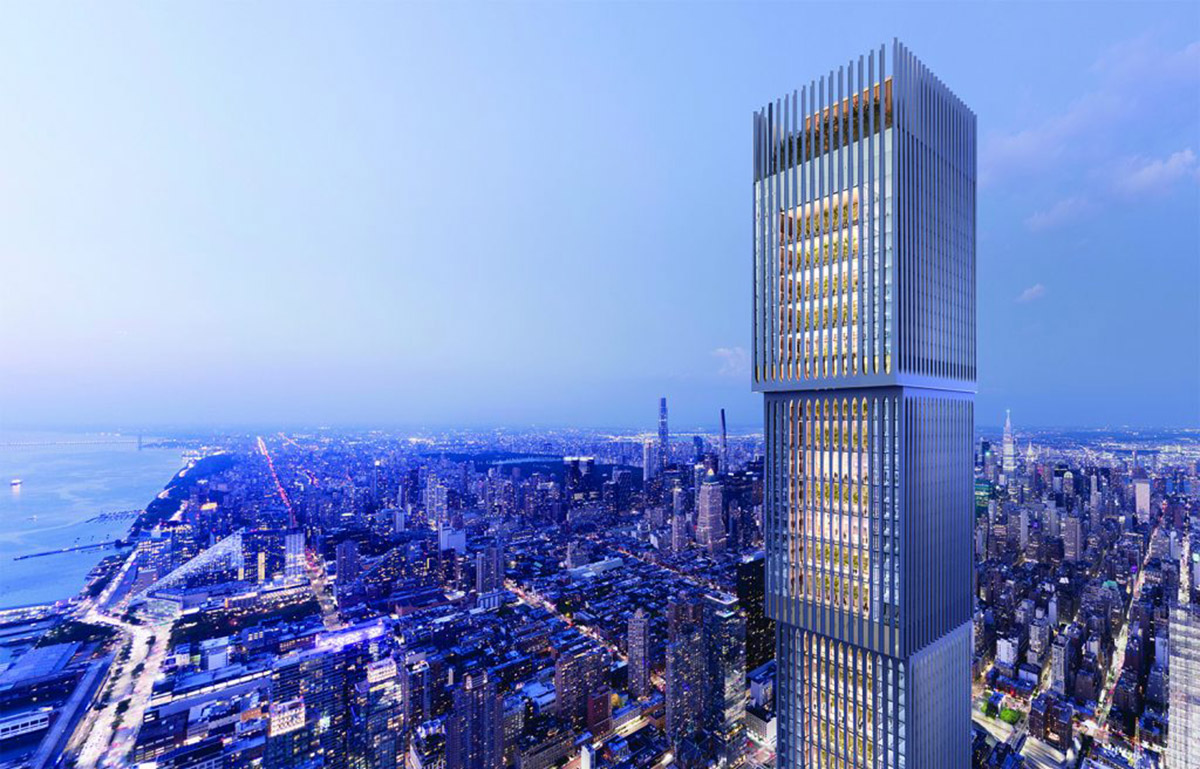 Adjaye's design has a dramatic appearance that reverses the traditional high-rise typology to offer larger spaces in upper levels. Composed of five stepped cantilevered volumes outwards, the volumes are wrapped a series of vertical stone fins that act a latticework from afar.

On the ground level, the studio uses inverted arches and irregular colonnades that wrap the glazed windows. As it is understood from the renderings, the studio designs an open and green terrace on the sixth level that separates the plinth from the tower itself. 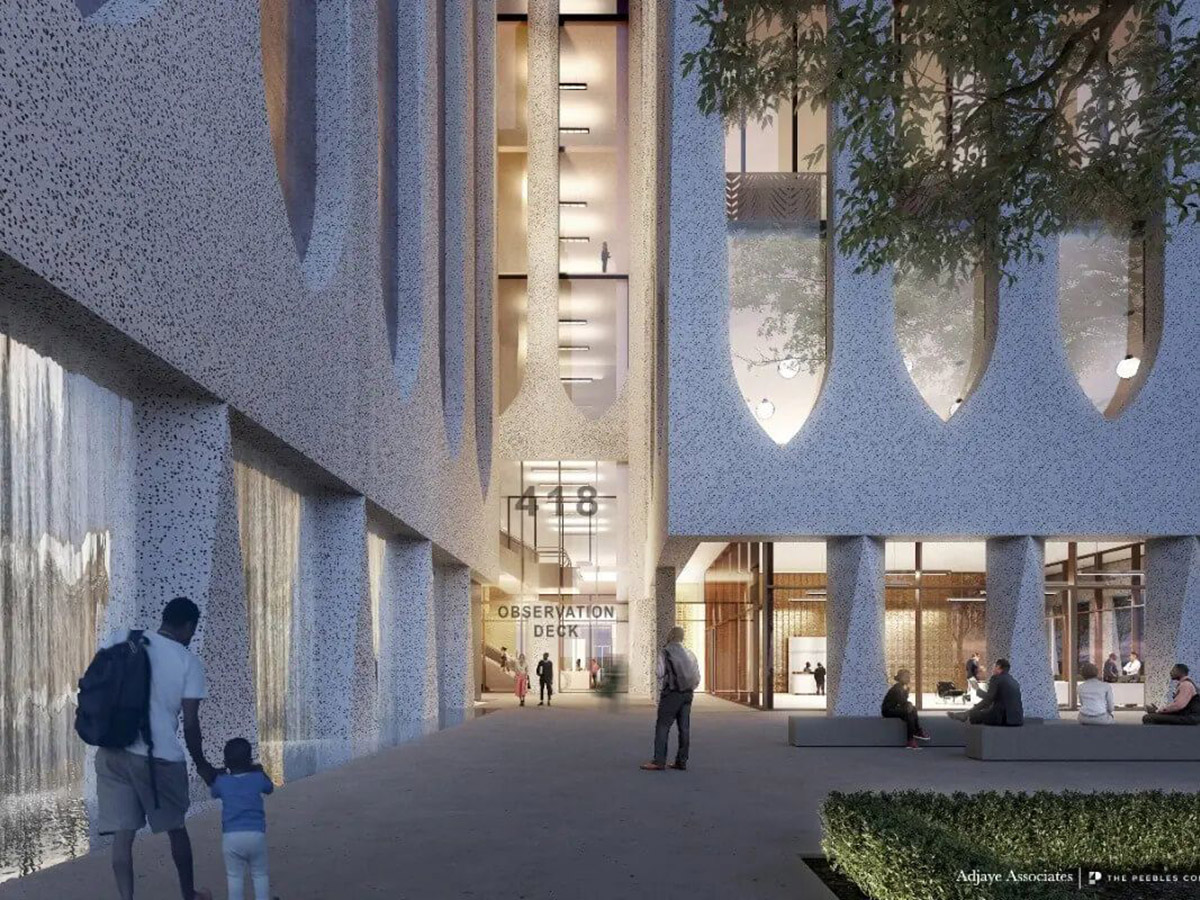 "This project is emblematic of true equity in development," said The Peebles Corporation.

"A symbol for all who visit New York, cementing in brick and mortar that New York is serious about economic inclusion." 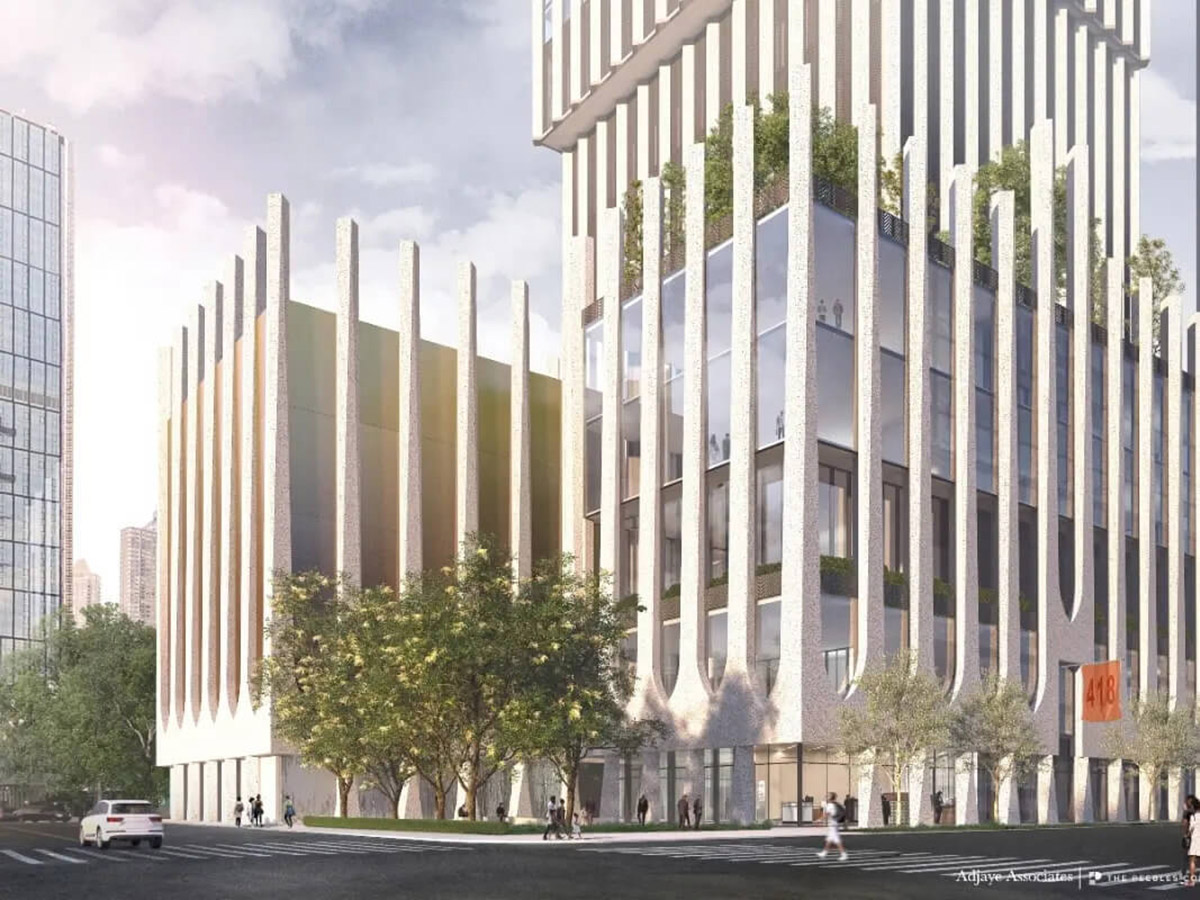 "Unfortunately, for most of New York’s history, African-Americans and people of color have been rendered as mere economic tourists who gaze upward at one of the greatest skylines in the world with the intrinsic knowledge they will never be able to participate in what really makes New York unique," said Rev Dr Charles Curtis, Head of NY Interfaith Commission For Housing Equality.

"The awarding of this project to this team will send a statement across the globe that architects, developers, engineers and financial professionals of color are now full participants in this great miracle of global capitalism called New York City." 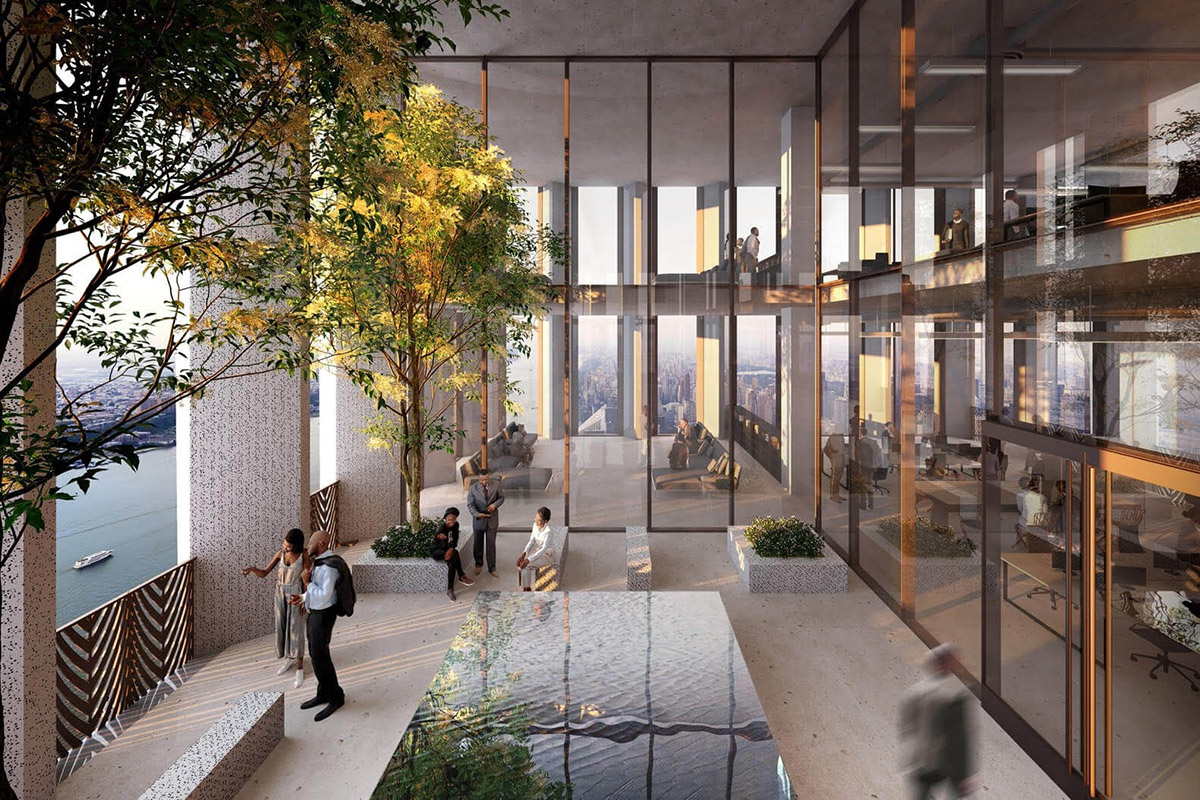 The firm recently won a competition together with Asif Khan, Mariam Kamara and Theaster Gates to redesign Liverpool's Canning Dock.

All images courtesy of the Peebles Corporation.