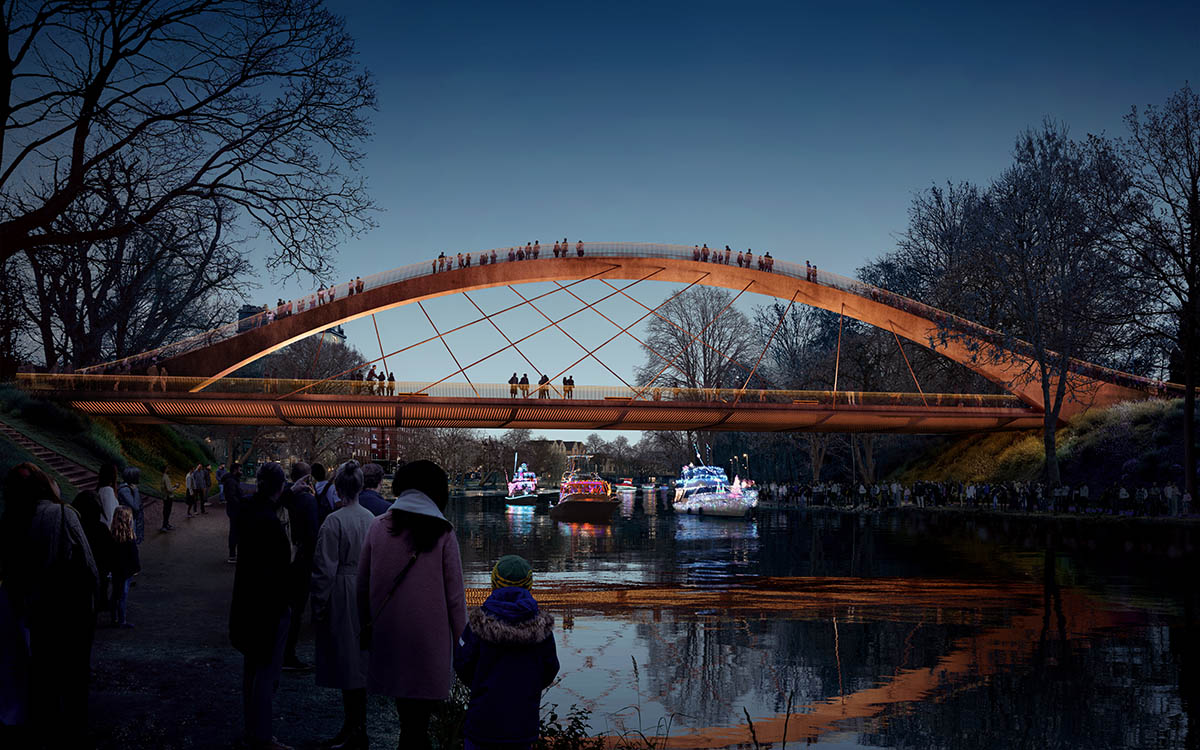 Spanish architecture practice Atelier Entropic has won a competition to design a new road bridge for pedestrians and cyclists in Ängelholm, Sweden.

The name of project, called Himlavalvet, is translating to the Swedish phrase ”heavens Vault”, the 80-metre-long bridge will allow people to climb a structural staircase and connect with the sky above to be one with the surrounding natural environment.

The bridge is developed as part of a wider development strategy by within the municipality of Ängelholm. The bridge is made of a unique single diagonal spanning arch, made from corten steel, and features an innovative deck which will be built from a hybrid steel and stress-laminated-timber (SLT) decking, aiming to radically reduce the carbon footprint.

"Today, cities and towns are shifting towards providing greater diversity in how we can interact with the city, to encourage people to be active and outdoors," said Atelier Entropic.

"Himlavalvet will combine a recreational viewing point with Ängelholms infrastructural needs. People will be able to climb the new bridge and enjoy views over the landscape, a space to play, meet and relax!."

"The bridge will become not only a vital new connection for Ängelholm, but also an exciting new destination attracting locals and tourists alike. In August spectators will cheer standing on the bridge’s arch as the boat parade passes through the river," the studio added. 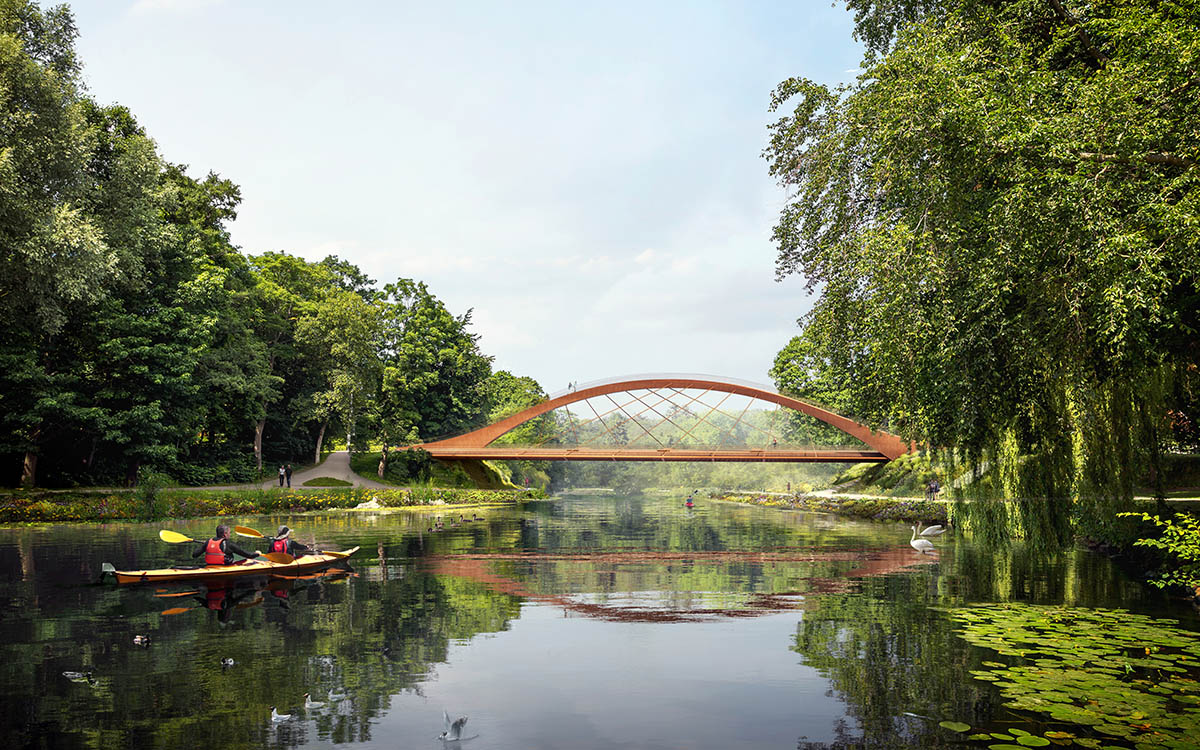 Himlavalvet Bridge provides a visual complexity, while functioning as a clear iconic gesture and nostalgic reference to the old railway bridge Pyttebron.

For the bridge's corten structure and wooden pedestrian flooring, the architects take cues from today’s much-loved bridge, celebrating the old whilst proposing a new and exciting future for Ängelholm.

The structural expression is expressed and celebrated and combined with the walkable structure gives the project a unique human scale, vital for such a critical urban node. The bridge creates the maximum opening available underneath the bridge to give greater views and minimize its presence in the natural surroundings.

At night, the bridge's lighting will illuminate only the structure, avoiding the water so as not to disturb the local wildlife. As the studio explained, light will be used strategically, lighting the main arch, from beneath creating a soft gradient with height whilst shaper and smaller lights will express the tension cables. Featuring a thin strip lighting, it will softly illuminate the pedestrian handrails for safety and comfort at night. Each lighting system is carefully chosen to complement one another, celebrating the bridge’s unique identity.

The bridge is described as "a bow-string type bridge", consisting of an arch whose horizontal forces at the ends counteract each other thanks to the connection to the deck, which acts as a tensioned tie.

According to the studio, "This bridge system has the great advantage that it does not produce horizontal reactions for gravitational loads, which makes it self-standing and allows to use a smaller foundation."

The arch is designed with a stiff trapezoidal box section that supports the cables, which are arranged so that each side of the deck is connected to one of the halves of the arch. "This creates a beautiful changing cable pattern, but also adds transversal forces to the arch," the studio added. 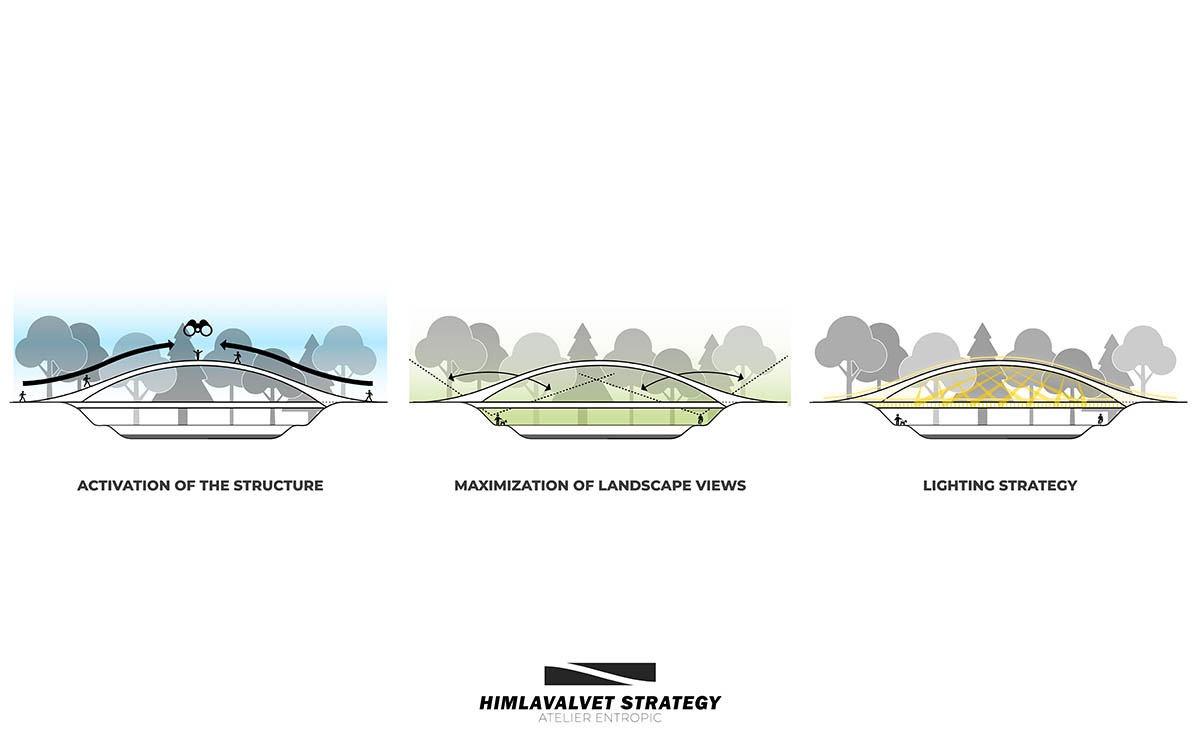 The suspended deck consists of the main transversal girders, hanging from the cables and supporting the stress laminated timber deck. Two longitudinal beams add stability to avoid differential movements of the main girders.

All the connection points of the cables to the beams at the edge of the deck are linked through an edge pipe to the bracing system of the deck, which consists of an additional system of prestressed bars that stiffens the horizontal plane of the deck to provide strength against transversal forces and distortion.

The foundation of the bridge is built from concrete piles, mostly concentrated on the side of the abutment where the arch is bearing. Due to the bow-string system, the loads are mainly vertical, but additional inclined piles are also placed to resist horizontal loads due to wind, seism or braking. 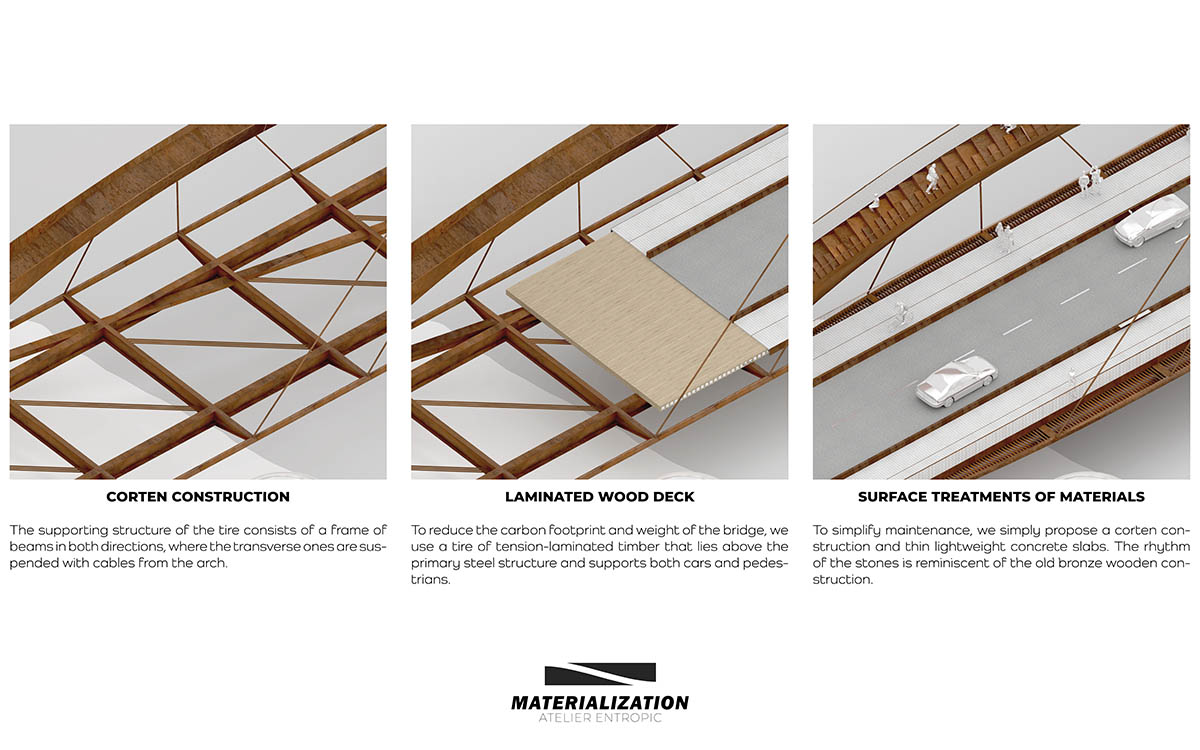 The bridge is supported on two pot bearings at each abutment, one under the arch, and one in the opposite corner. They are separated as far as possible to maximize the lever arm and avoid uplift forces in the bearings. Therefore, a light foundation can be achieved, in order to maximize the distance to the neighboring building, not affecting its foundation, and allowing an easy construction process around the abutments.

The existing foundations of the actual bridge will be removed, recovering the original topography and landscaping of the riverbed, thus reducing the impact of the building in the environment thanks to the increased bridge span that stands on the top of the embankments.

The main skeleton of the bridge is made in weathering steel (corten steel), which is a steel alloy developed to form a stable rust-like appearance that eliminates the need for painting thanks to the increased resistance to atmospheric corrosion provided by the self-regenerating protection layer in the surface. 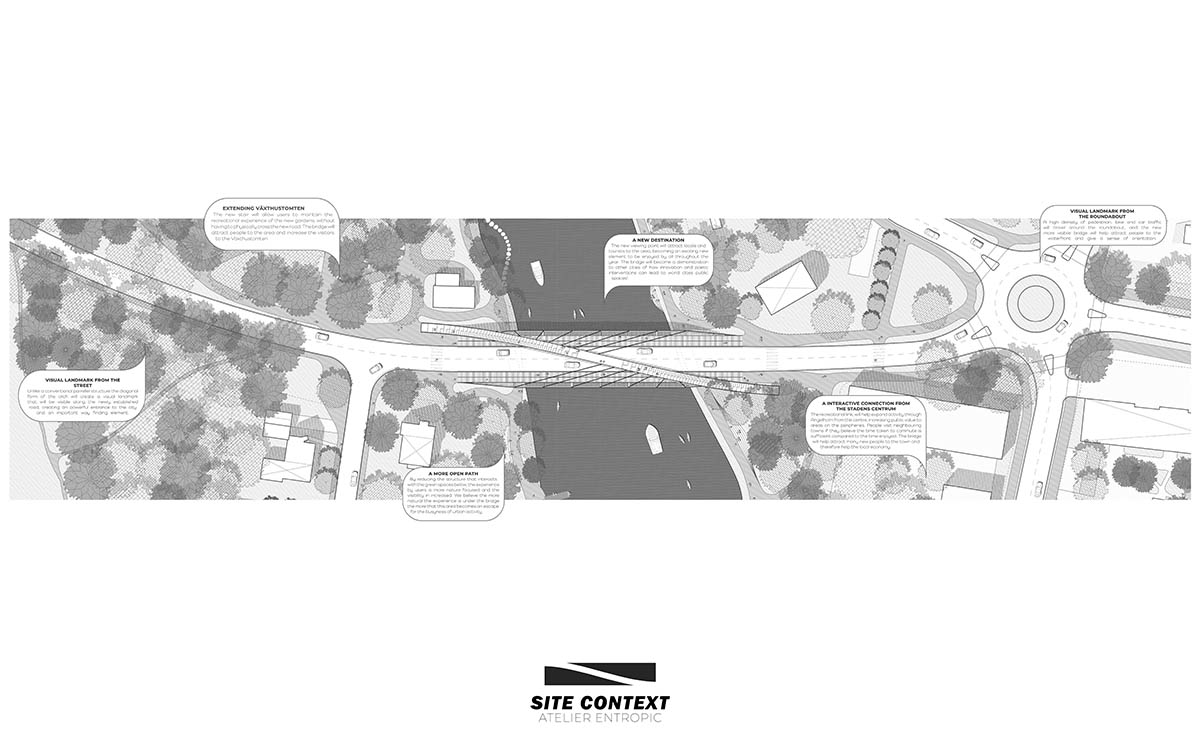 The steel is used for the main structure of the bridge that makes up the arch, and the tie, formed by a box girder that runs diagonally below the deck. The tie connects both ends of the arch so that the horizontal forces balance each other, and the system is closed, as an object that can be transported.

The supporting structure of the deck is formed by a framing of beams in both directions, where the transversal ones are suspended with cables from the arch. This steel framework is designed to have the minimum depth, but at the same time being able to host the main tie, the prestressed rod bracing and the services below the deck.

The deck is formed by a stress-laminated-timber deck which is a light and sustainable structural plate consisting of attached glulam beams that form a continuous surface able to withstand traffic loads.

It is prestressed with the aid of prestressing bars running through all the deck from side to side that make the different beams work as a single structural system. 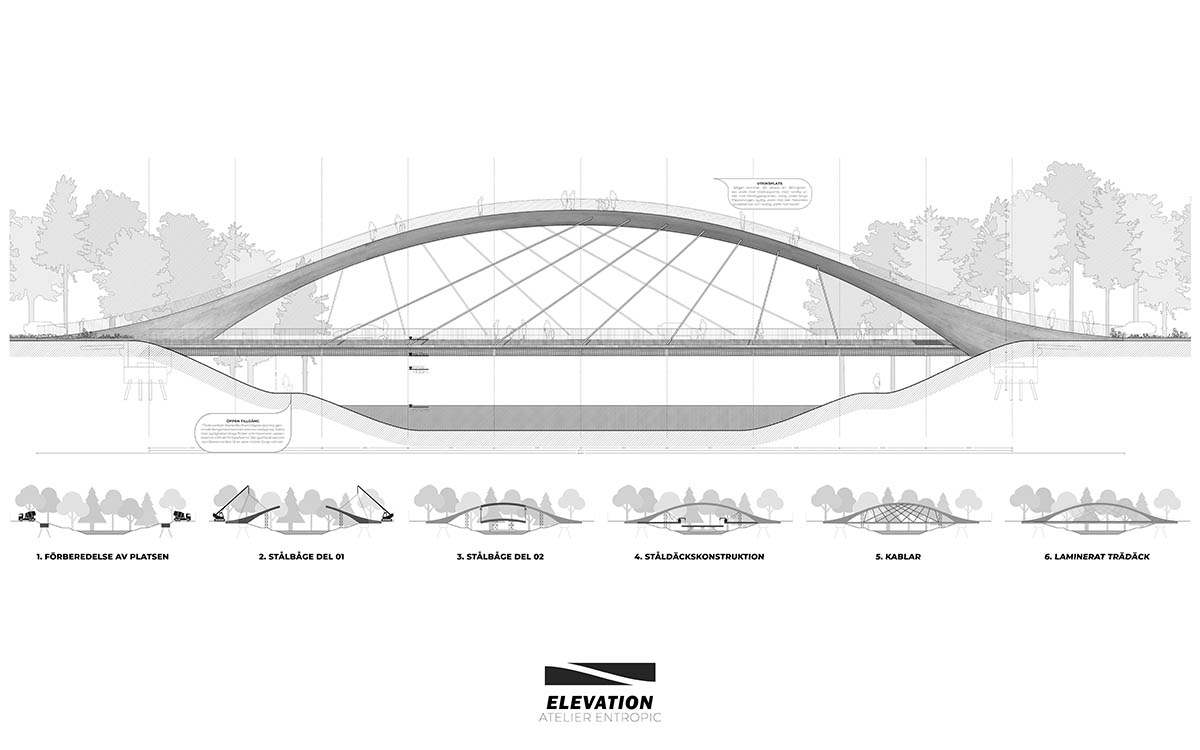 The team takes reference for the deck from a 56-metre-long SLT deck bridge in Halmstad built by Moelven, a Scandinavian industrial group that produces building products and systems.

Abutments and foundations will form the only concrete parts of the bridge, as these parts are in contact to the ground, so "this material is the most appropriated one for this issue," as the studio emphasized.

"Concrete has high endurance and low maintenance requirements, so it will last all the service life of the bridge without maintenance operations," the architects added.

Atelier Entropic is designing a new e-commerce hub in Lithuania.