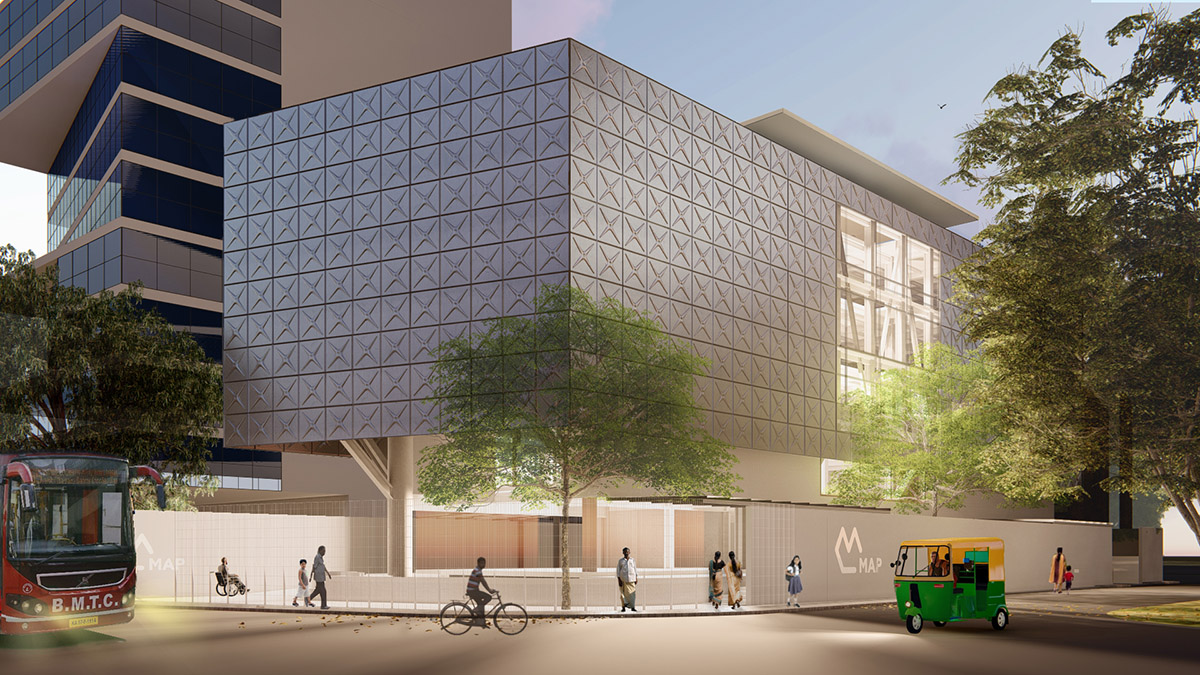 Indian architecture studio Mathew & Ghosh Architects has shared details about its new museum Museum of Art and Photography (MAP) in Bangalore, India, which is set to be opened in mid-2022, as confirmed by the studio.

The studio has shared the final images and construction photographs of the project that shows the project progressing rapidly in Bangalore.

The museum, currently listed in WAC's 10 hotly-anticipated buildings of 2022, is located at a strategic site in the cultural precinct of the city, facing the Government Museum (for Archaeology), Visvesvaraya Industrial & Technological Museum and the Venkatappa Art Gallery, the new MAP creates a larger zone of cognition and a destination for cultural exploration in the city. 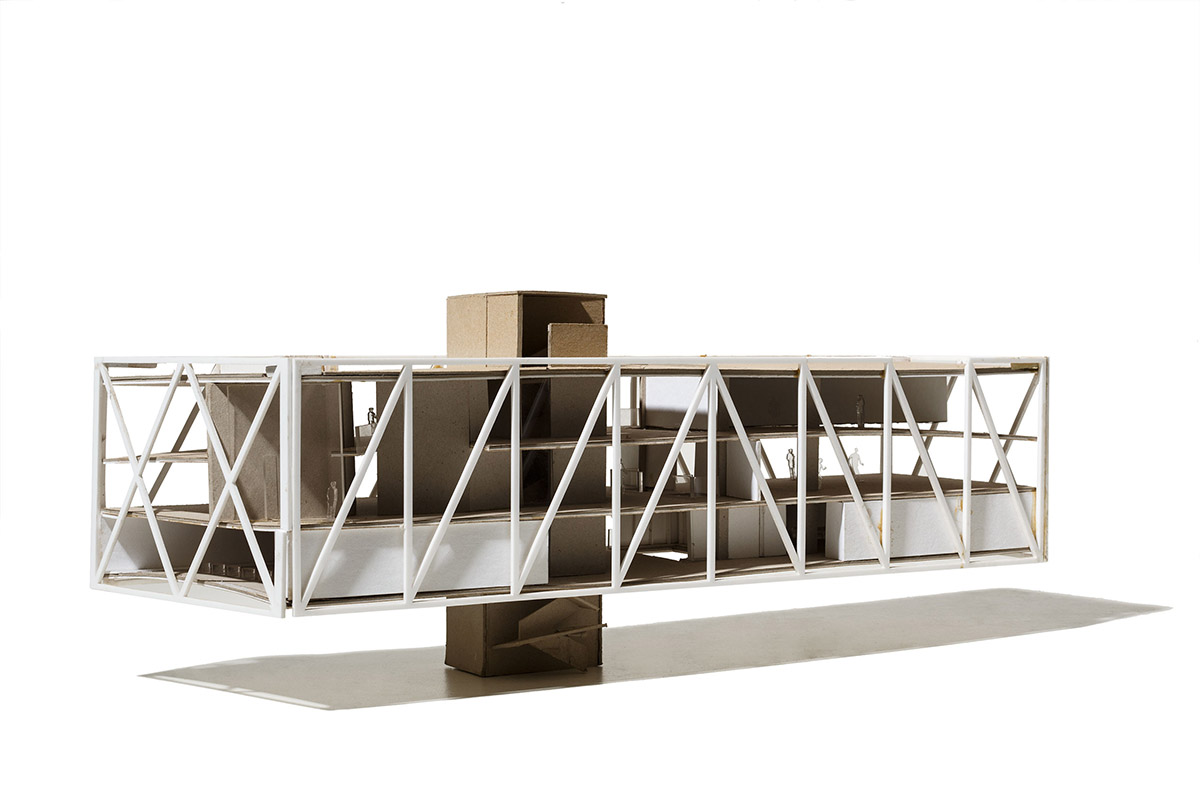 The museum is close to the 296-acre Cubbon Park and the UB City Mall, both visible from the upper levels. According to the studio, this created an opportunity to bridge the presence of the city and the forest / park from the museum.

The five-storey building will house more than 18,000 works donated by philanthropist and collector Abhishek Poddar, who is also the founder of the Museum of Art and Photography. 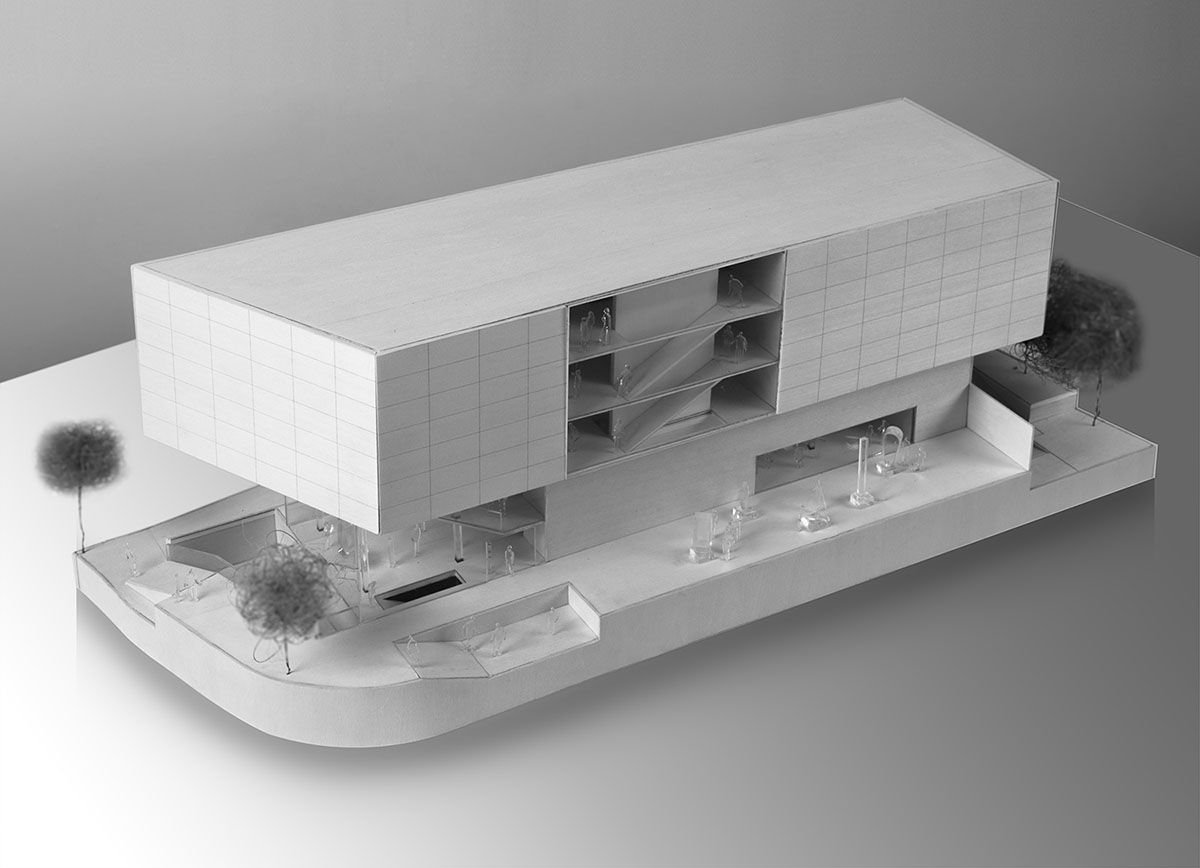 The physical recognition and the human factor were the key design elements that define the overall language of the museum. For this reason, the architects elevated the building from the ground and embedded all function below the ground and upper levels.

"Architecture for such a purpose in its imagination has taken this as a primary goal, in its thought, physical structure, representative language and narrative," said Soumitro Ghosh, Partner at Mathew & Ghosh Architects.

"An idea deeply embedded into the immediate context, the city, people and place and aware of its responsibility to enable art that is by nature unpredictable." 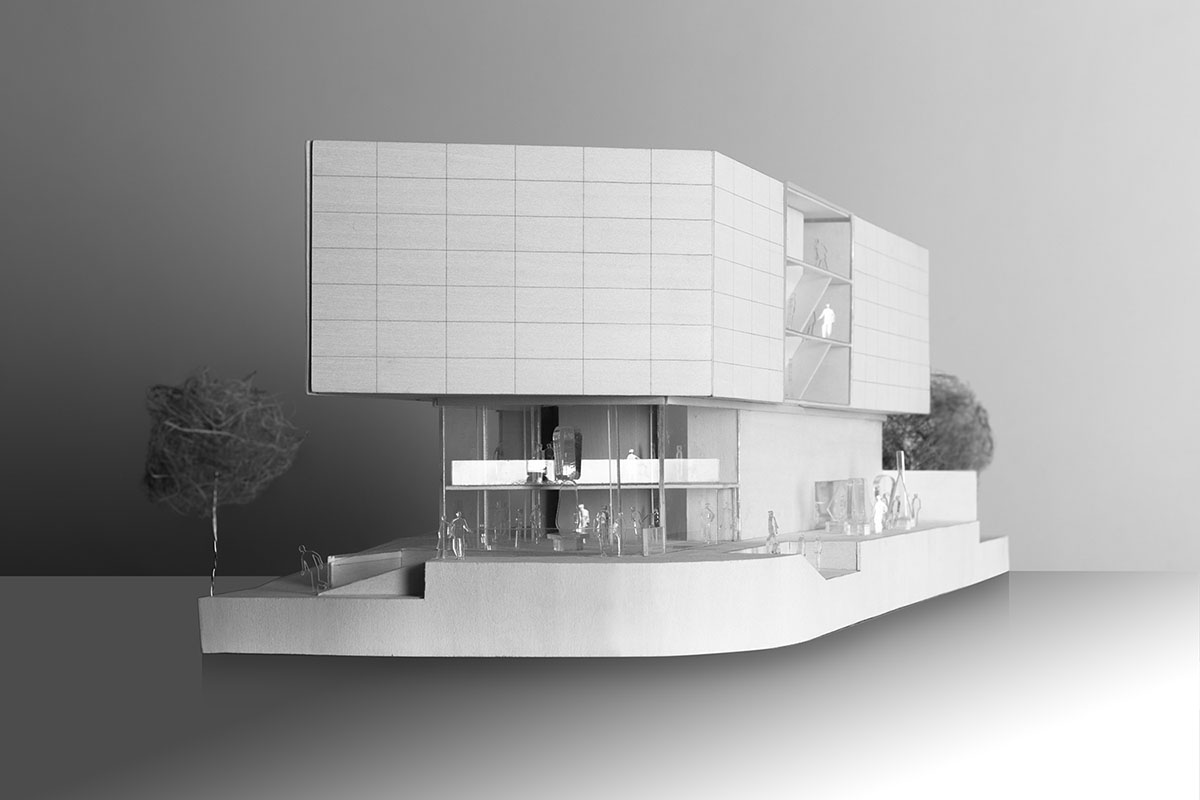 Ghosh explained that "during the design development of the project there were numerous and frequent conversations with the MAP Architectural Committee led by Rahul Mehrotra of RMA Architects, Mahrukh Tarapore and the late Martand Singh as its core members and MAP visionary Abhishek Poddar."

"The architectural necessity for MAP to be an unmissable part of the city for the visitor and the dweller alike was a critical factor. It had to be iconic with an ease of its physical recognition." 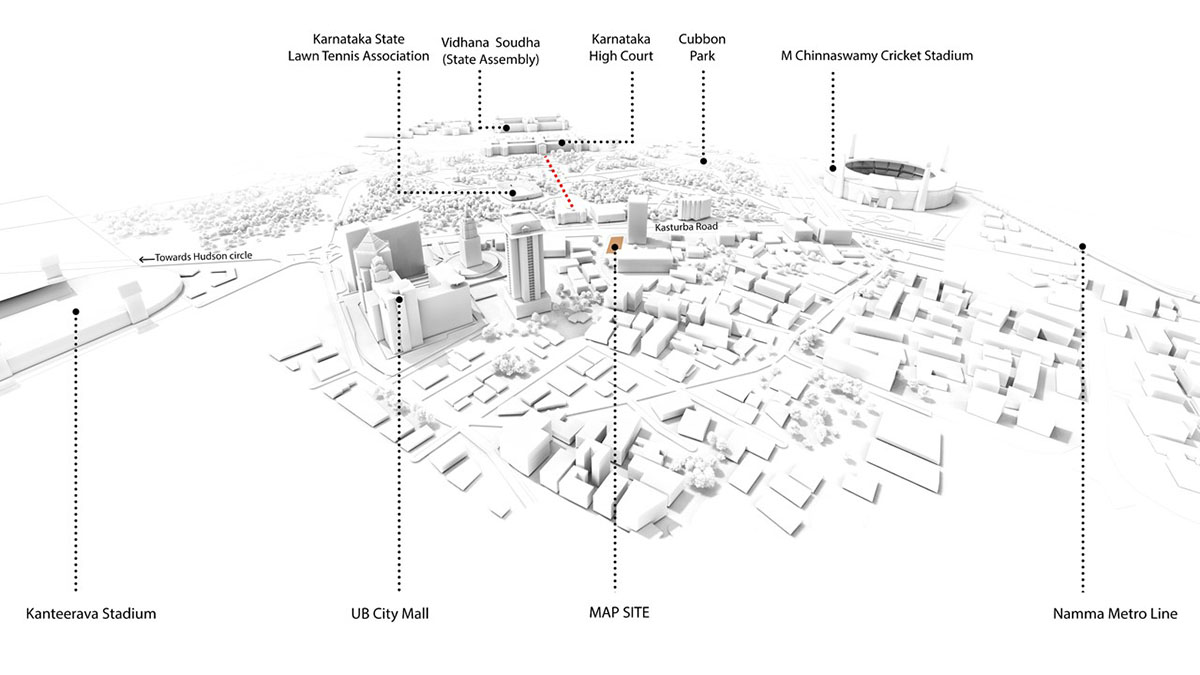 The architects aimed to isolate precious art works and artefacts from the exposure to ultraviolet light which necessitated an opaque enclosure for the main galleries, along with required temperature and humidity control.

The creation of visual transparency, which was also another key design component of the museum, has determined that when looking out of the museum, all public areas were important.

The transparency of the public areas is provided at the ground level and its attached outdoor sculpture courtyard and the lobby, opens these public spaces up. 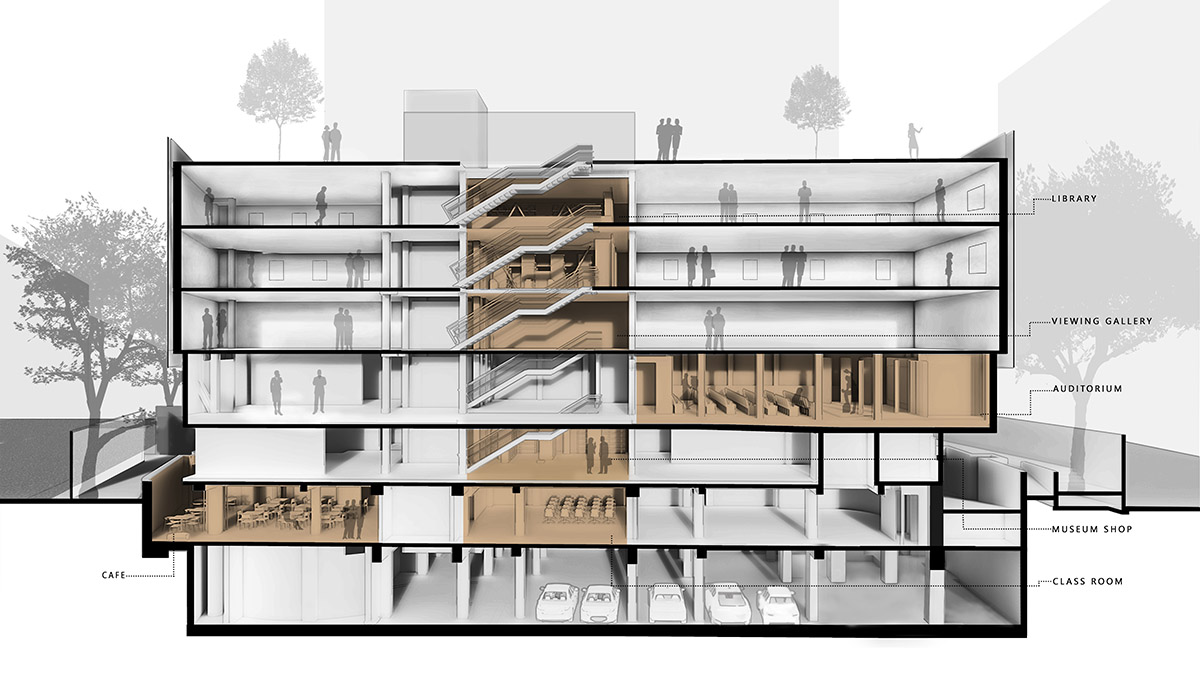 At upper levels, the lobbies create the break between the galleries / auditorium, conservation laboratory, the library. This is one of the essential features for places for art to dilute museum fatigue intermittently.

The studio designs public areas at the lower levels of the building with the entrance, interactive screens, experience centres, public outreach classroom, short term/ frequently changing display art gallery, museum shop and a cafe with an open to sky courtyard. The first floor is partially dedicated to a curated screens gallery, a visual gallery /storage, and an auditorium. 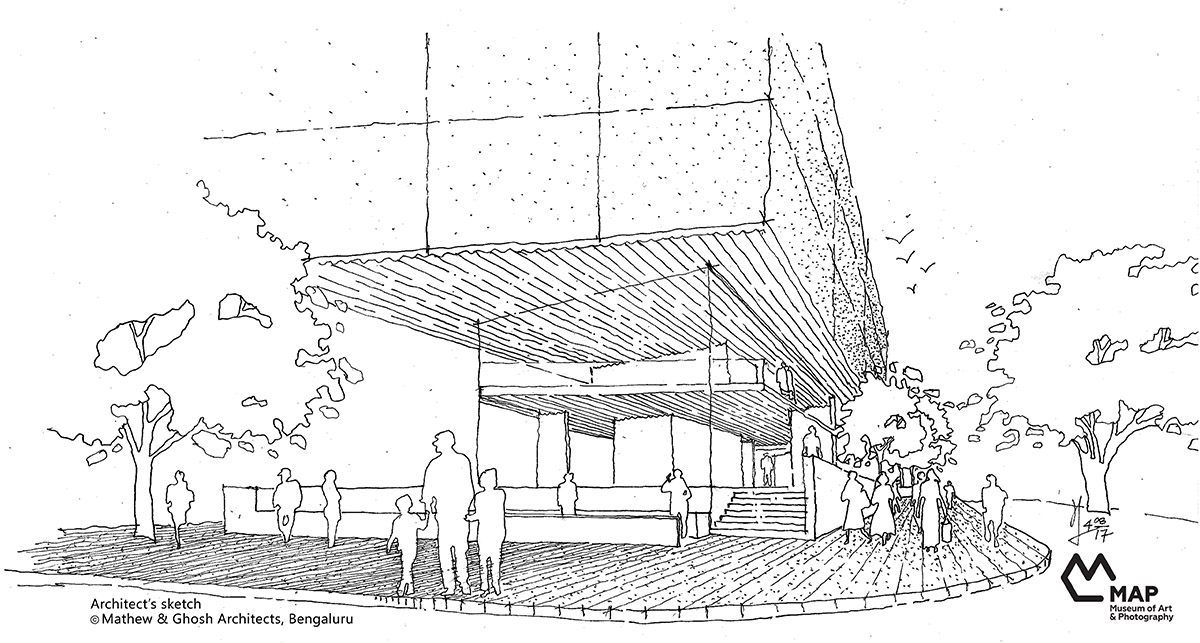 While the second floor is populated by the conservation laboratory that is open to the public, the double height rare books library and the MAP team workspace, the third and fourth floors are used as galleries - including a connected passage gallery at the fourth floor which makes it a large singular gallery when desired.

The terrace has a few public facilities such as the quiet room and an alfresco dining area with a wonderful view of the surrounding of Cubbon Park and the UB City.

The opacity that creates the enclosure of the galleries is clad with stainless steel panels, embossed with a cross pattern (structural pattern for stiffening the surface of the cladding, thereby reducing the thickness of the stainless-steel panel sheet and its weight onto the structure) which is traditionally associated with post-industrial metal panel water tanks. 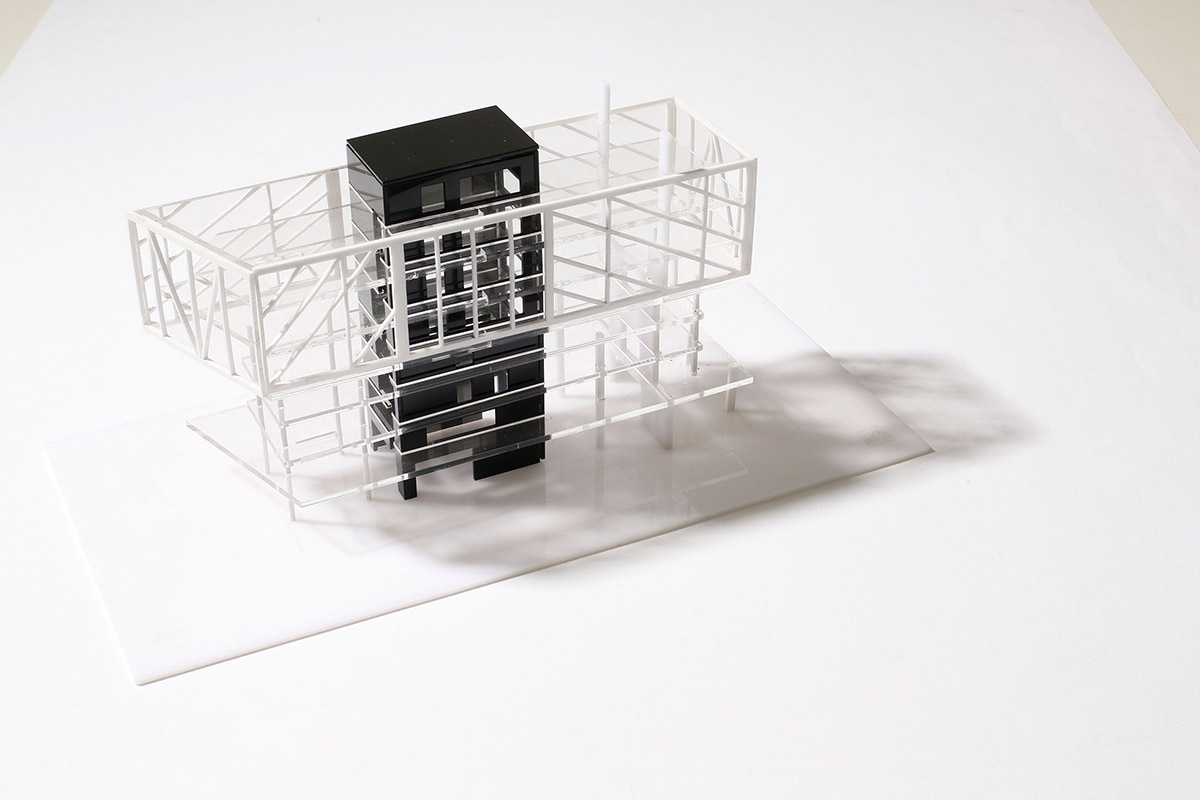 According to Ghosh, this emerges from a metaphorical reference to the capacity of art to create a thrust on society and culture for reflection, change and evolution. And, it references art and its increasing preciousness, like water, within this stainless steel clad container.

The structure's overall form is described as "unique", since it has a small footprint and an enlarged area for the upper levels. The structure is envisioned as a box resembling a "water tank structure".

Built in mild steel framing (above the basements in reinforced concrete) its structural elements/ columns shift to the outer surface of the box. 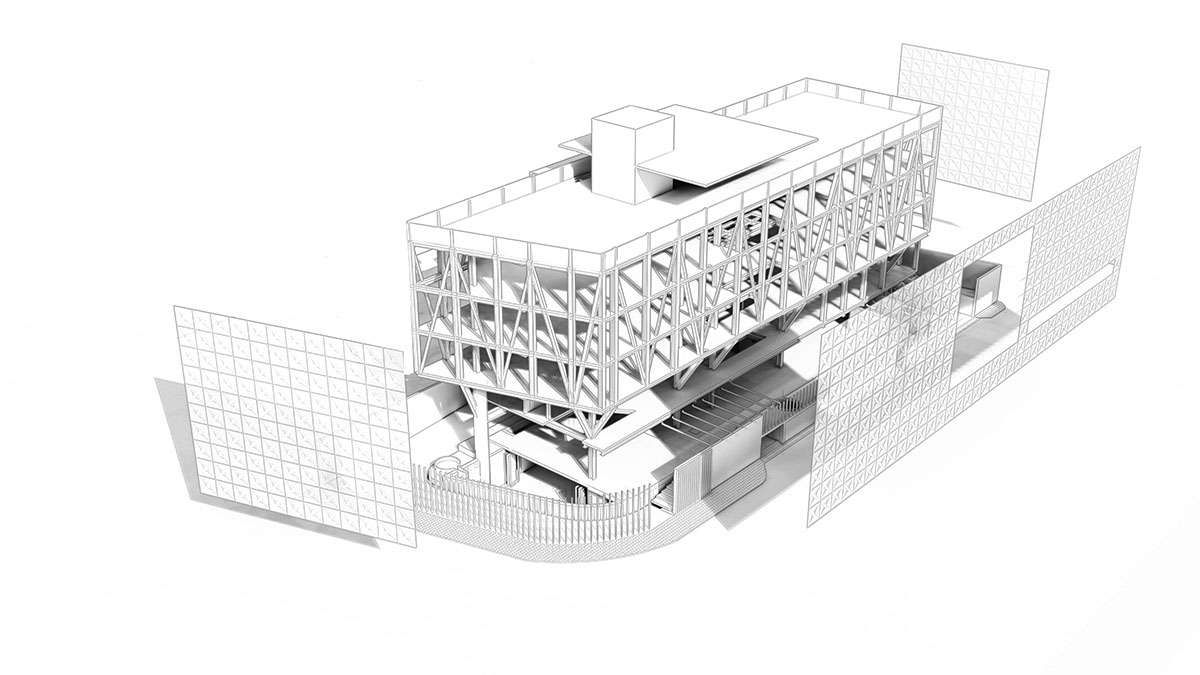 To optimise the structure, the studio creates column free spaces for the galleries the structure is worked out as a box (that gains its strength from its surface as planes) compared to traditional columns and cantilever slabs at each level.

"This surface of the structural exterior therefore reiterates the idea of the shell / the skin of the box with a water tank like appearance," Ghosh added. 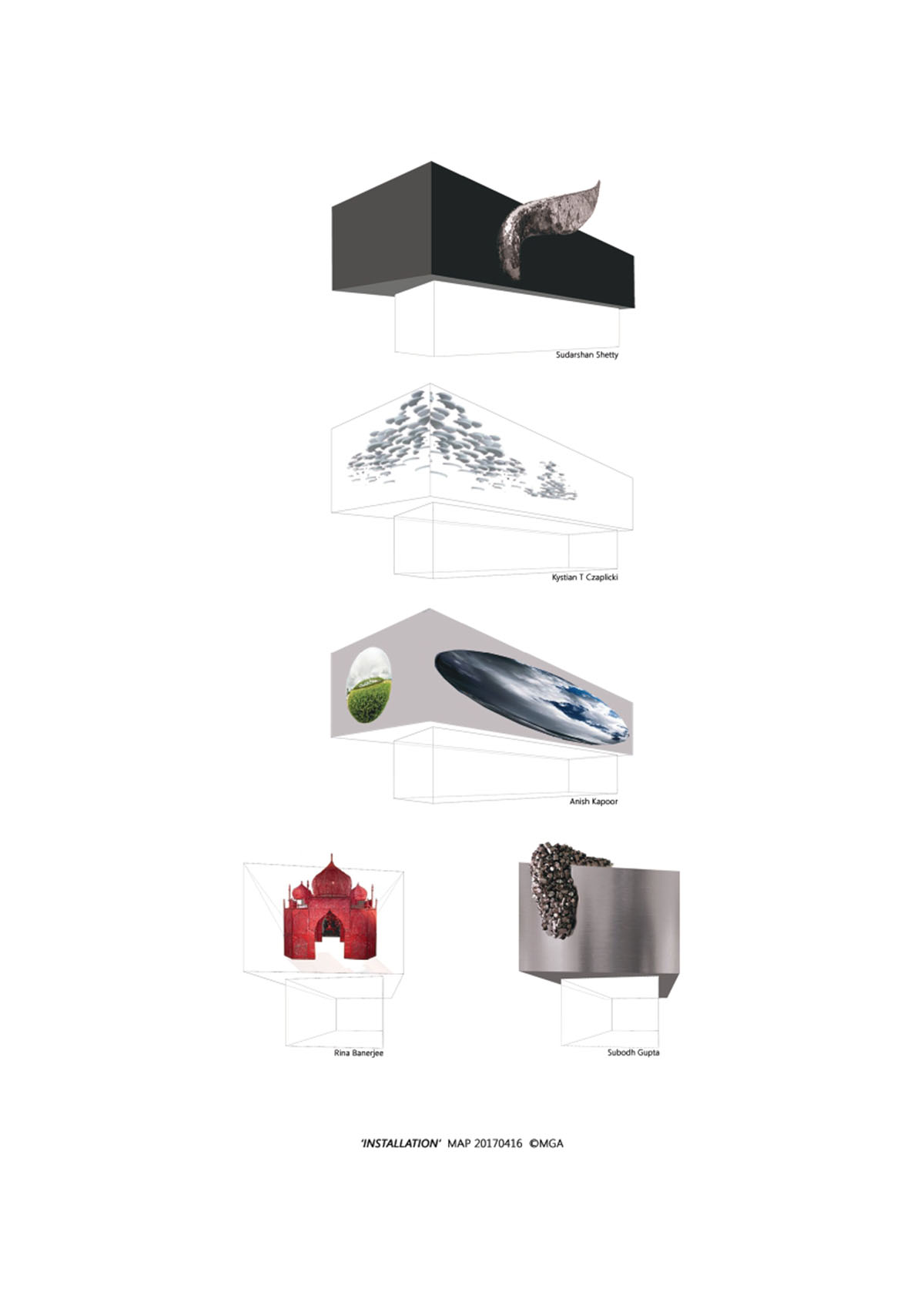 "The simplicity of this thought for the MAP building, the materiality, the transparency, and opacity are part of the journey and the story behind the creation of the most significant new destination and architectural icon of the city of Bengaluru dedicated to the culture of the city, the south, the south asian region," Ghosh explained.

"The winds that will pass through, from, across and shall bring cultures across the world closer."

"Beyond the physical entity of the museum / gallery it is the engagement, curiosity, and partnership it can create with people and cultures. That is something MAP has already initiated over the last few years very successfully and new ideas are evolving in this continued pandemic era," the architect emphasized. 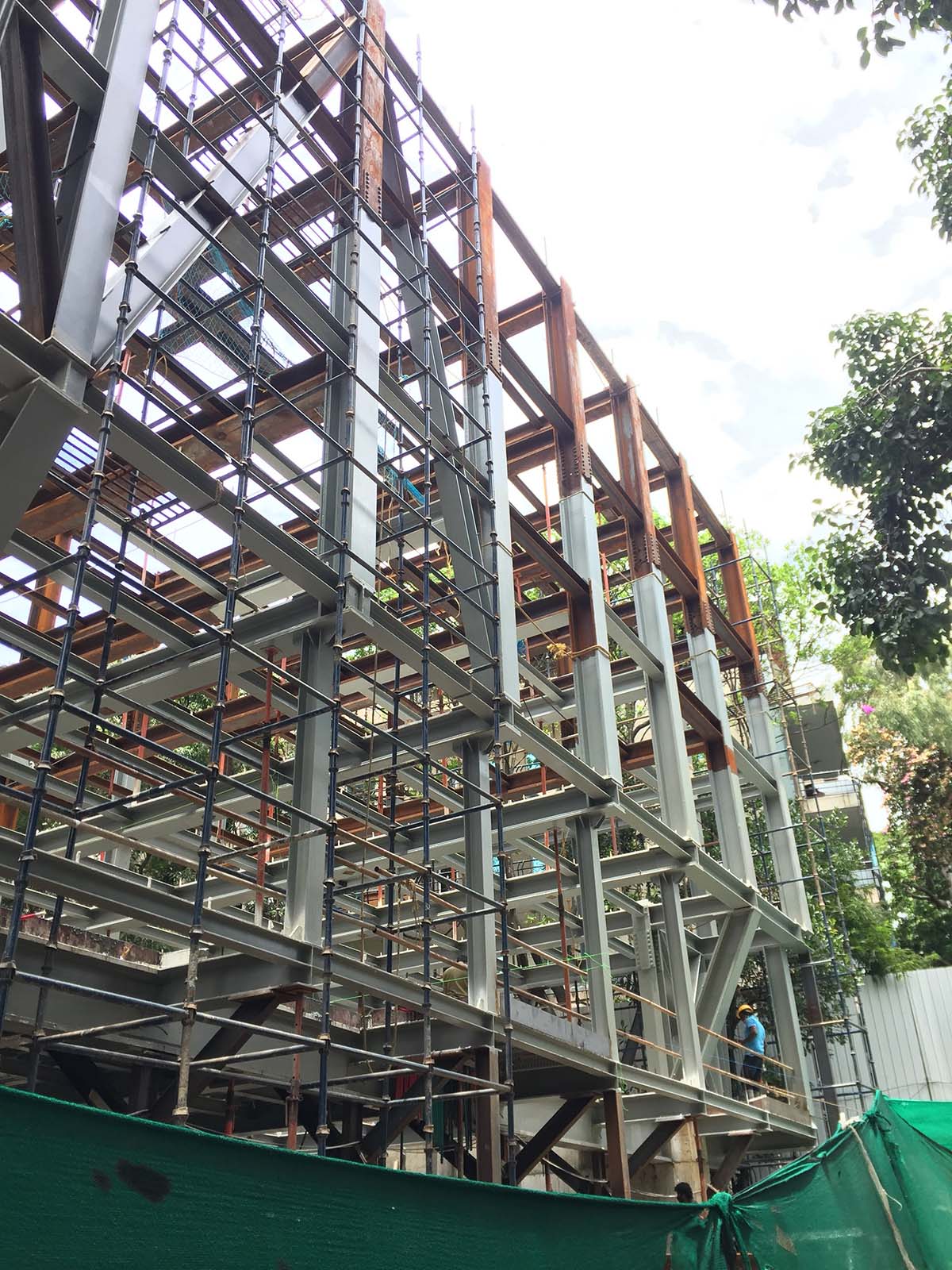 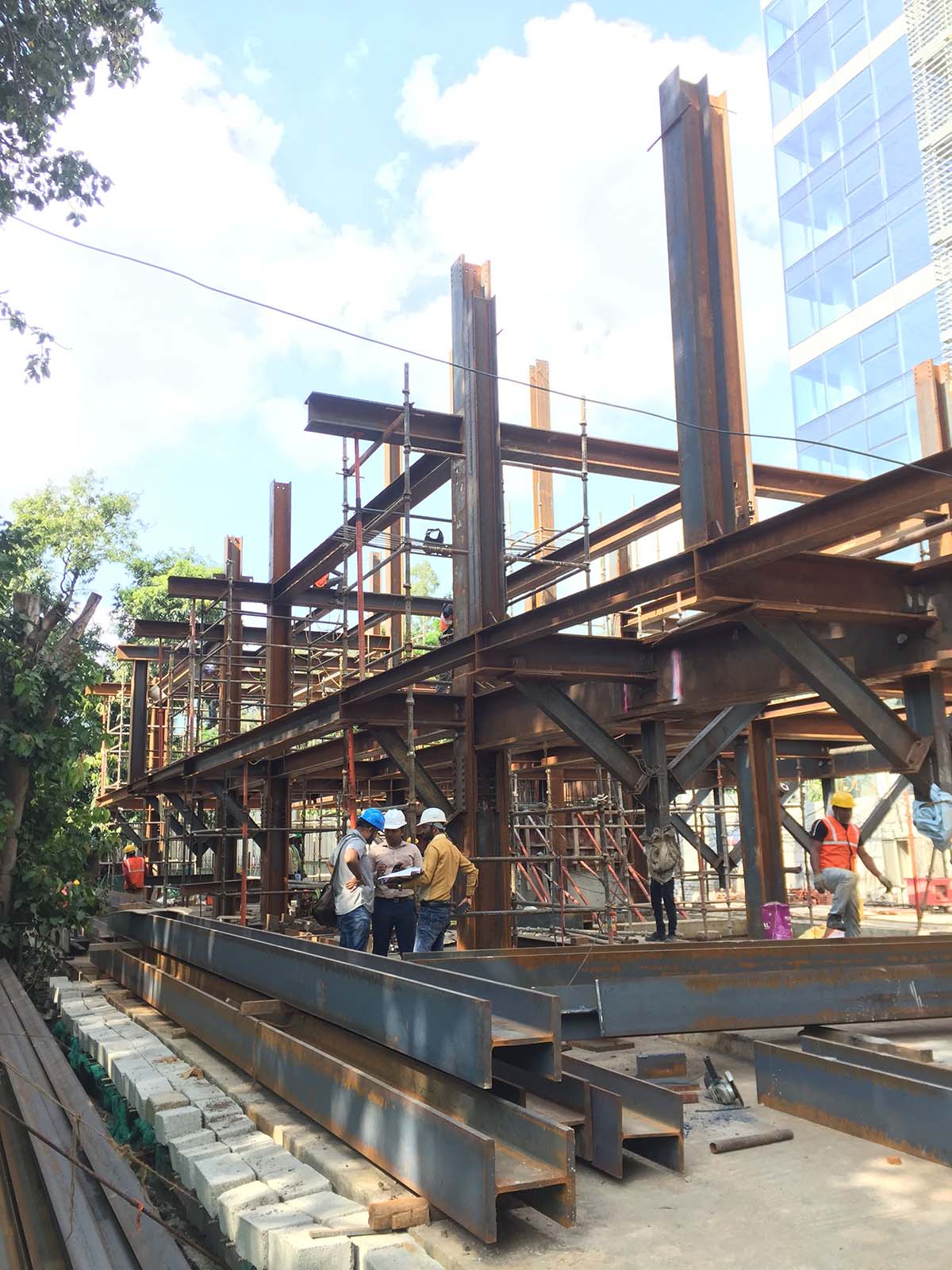 Once complete, the Museum of Art & Photography (MAP) will house a large and varied collection of art, photography, textiles, and design, predominantly from the Indian subcontinent.

At the heart of MAP’s identity is the idea of tracing and mapping relationships between artistic disciplines – breaking away from older schools of categorisation and striving instead towards a newer idea of narrative building.

Motivated by a need to move beyond the state of the current museum system in India today, MAP intends to become a living institution for the visual arts, and forms part of a new wave of museums in India attempting to draw attention to the cultural value of the arts.