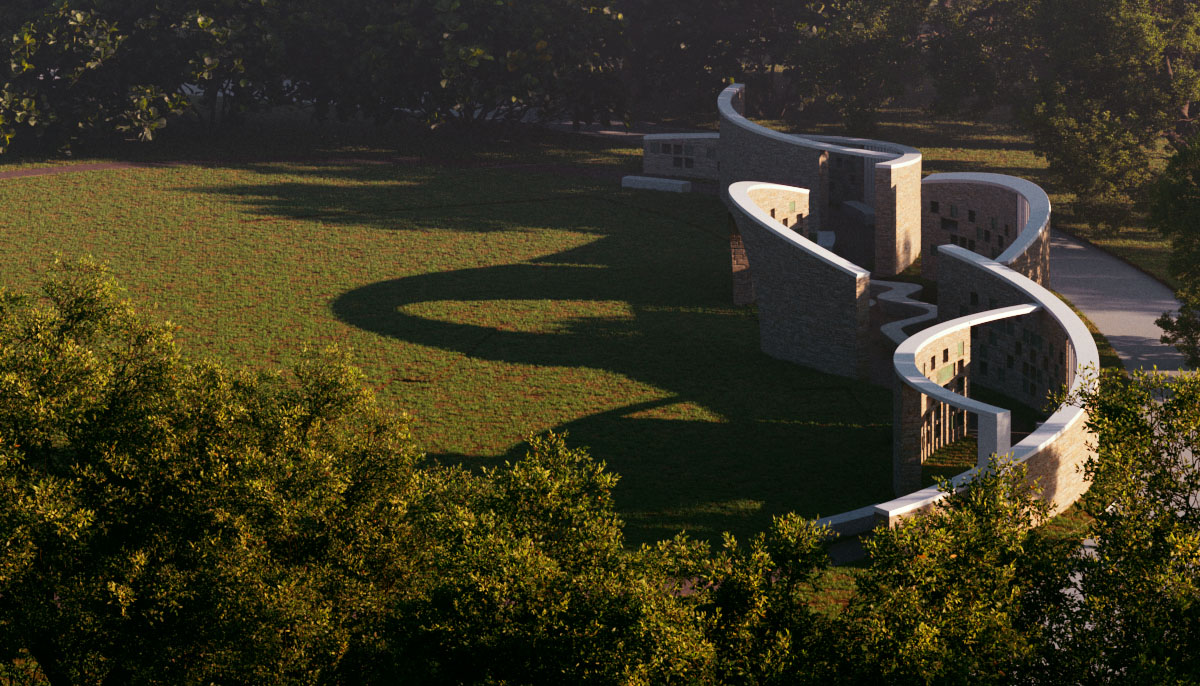 California-based architecture studio Form4 Architecture has revealed design for a columbarium in the Seacliff neighbourhood of Aptos, California, a seaside community on the Pacific coast.

Called Intertwined Eternities, the structure occupies the drought-tolerant gardens of the Episcopal Church of St John the Baptist whose board approved the columbarium design that responds to the distinct timber architecture of the church by Californian architect Warren Callister and completed in 2009. 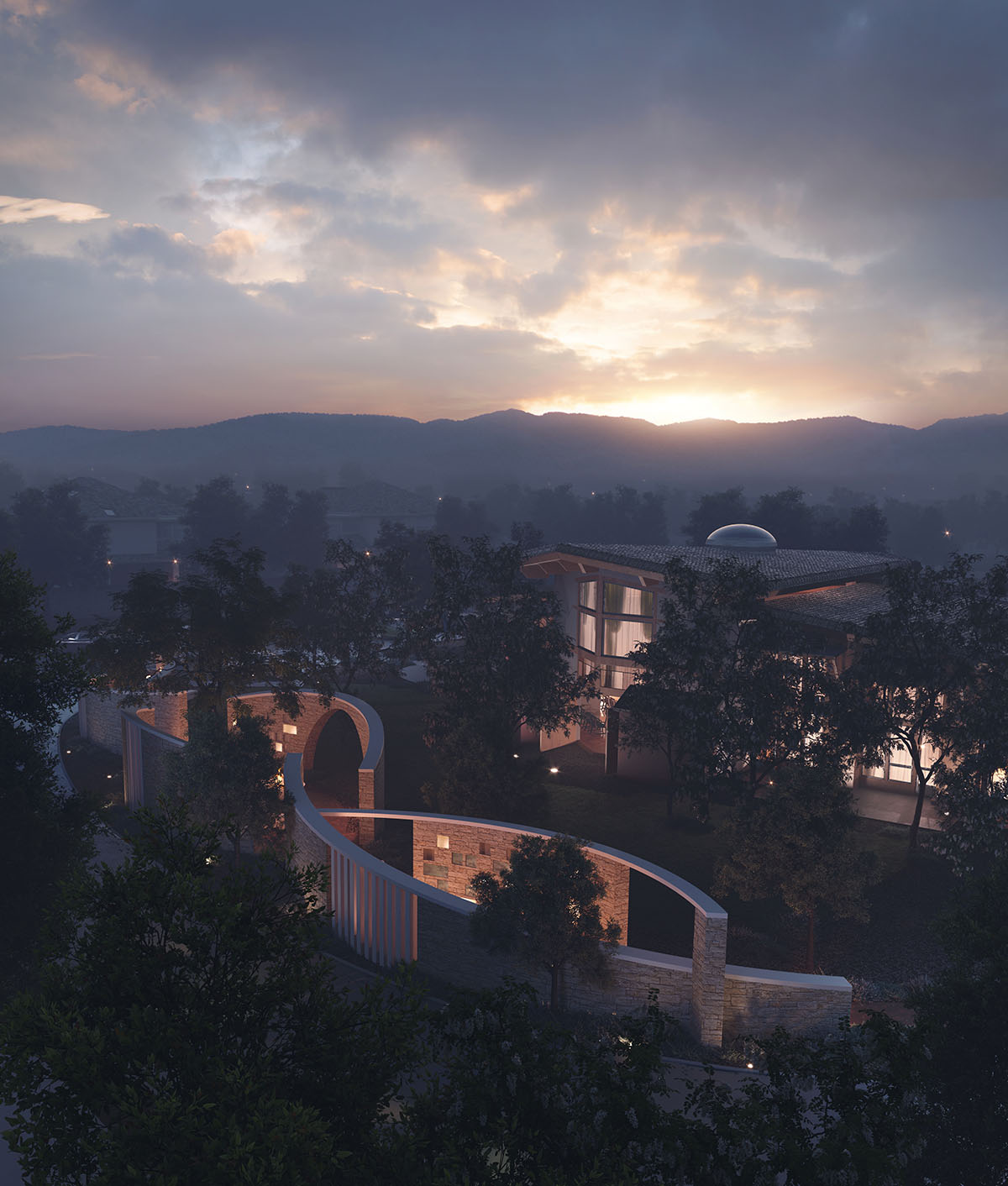 The columbarium presents a choreographed sequence of open-air stone pavilions, and it reads like a meeting of intertwining outdoor rooms. The weight and sense of permanence offered by its 4-15 ft high stone walls contrast with the lightness and ever-changing seasonality of the surrounding landscape - designed by Form4 - framed by picturesque apertures punctuating the walls. Here, architecture and nature exist in a state of equipoise. 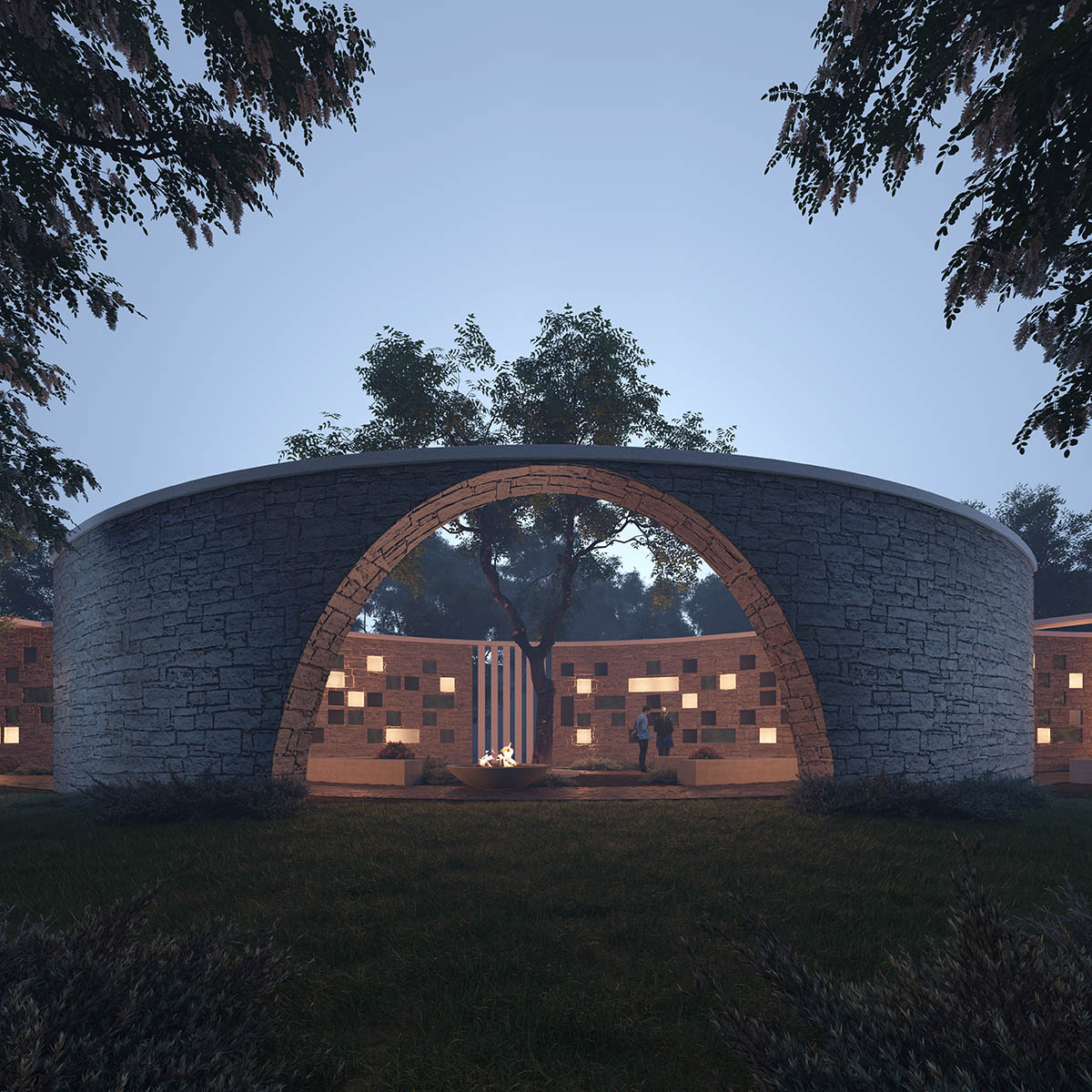 Creating an interlaced form, its architecture evokes the notion of Intertwined Eternities, alluding to the endless number of different journeys taken through life and beyond by individuals who nevertheless belong to a connected humankind.

The design of the columbarium also symbolises the transition between birth and death and how this is inevitably a return to nature.  Each wall points to the next emphasising the sense of transition through movement.

This notion of passage, or flux, is has been counterbalanced by a strong desire to create a building that while suggesting movement is also, in spirit, eternal and fixed. In this way, Form4’s interpretation of the monumental plays equally with both a sense of gravitas and the idea of the fleeting or ephemeral. The architecture describes both stillness and movement. 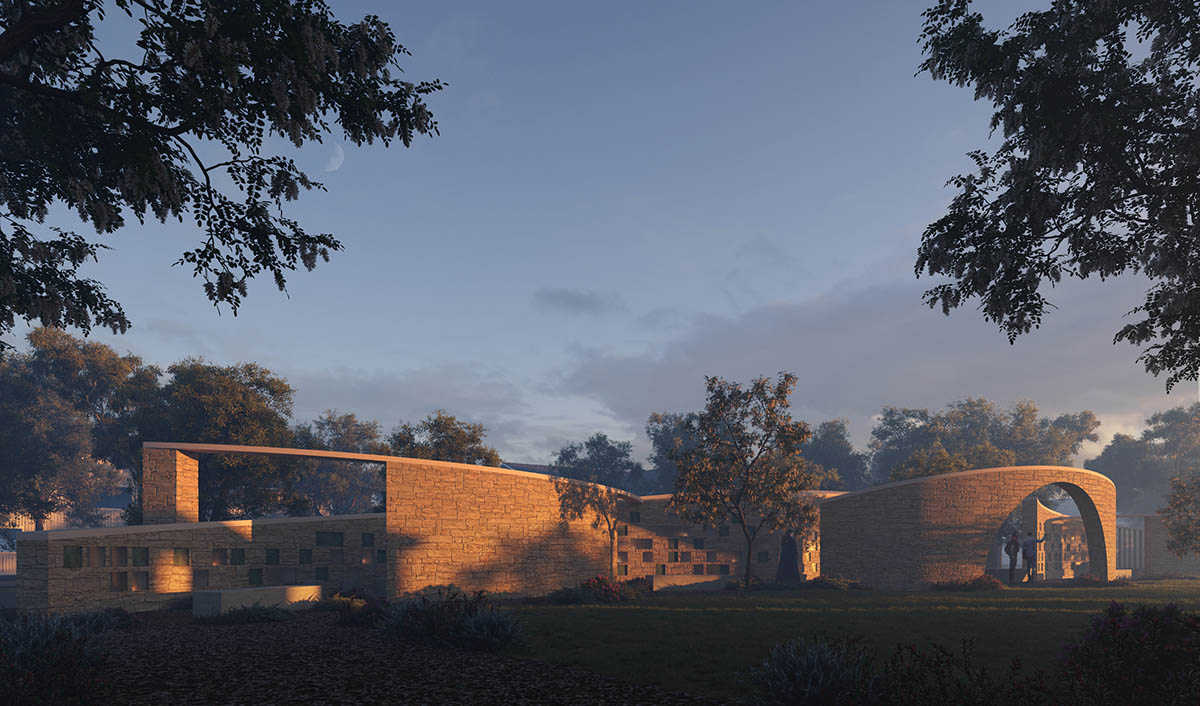 "The design for a columbarium at St John’s Episcopal Church starts with the concept that life is a journey, a pathway, a collection of moments, that in this journey life reveals itself slowly and at its own pace. You move forward when you are ready," said John Marx, Form4 Architecture’s Chief Artistic Officer and co-founding Principal.

"This is journey is rarely linear, your approach to the columbarium starts with a low wall that gently arcs, rising gracefully to invite you in, enticing you to explore further. Warm stone walls project a sense of history, of gravitas, a rootedness in the earth."

"As the first wall rises, another wall arcs overhead forming a gateway, a threshold towards sacred ground," Marx added. 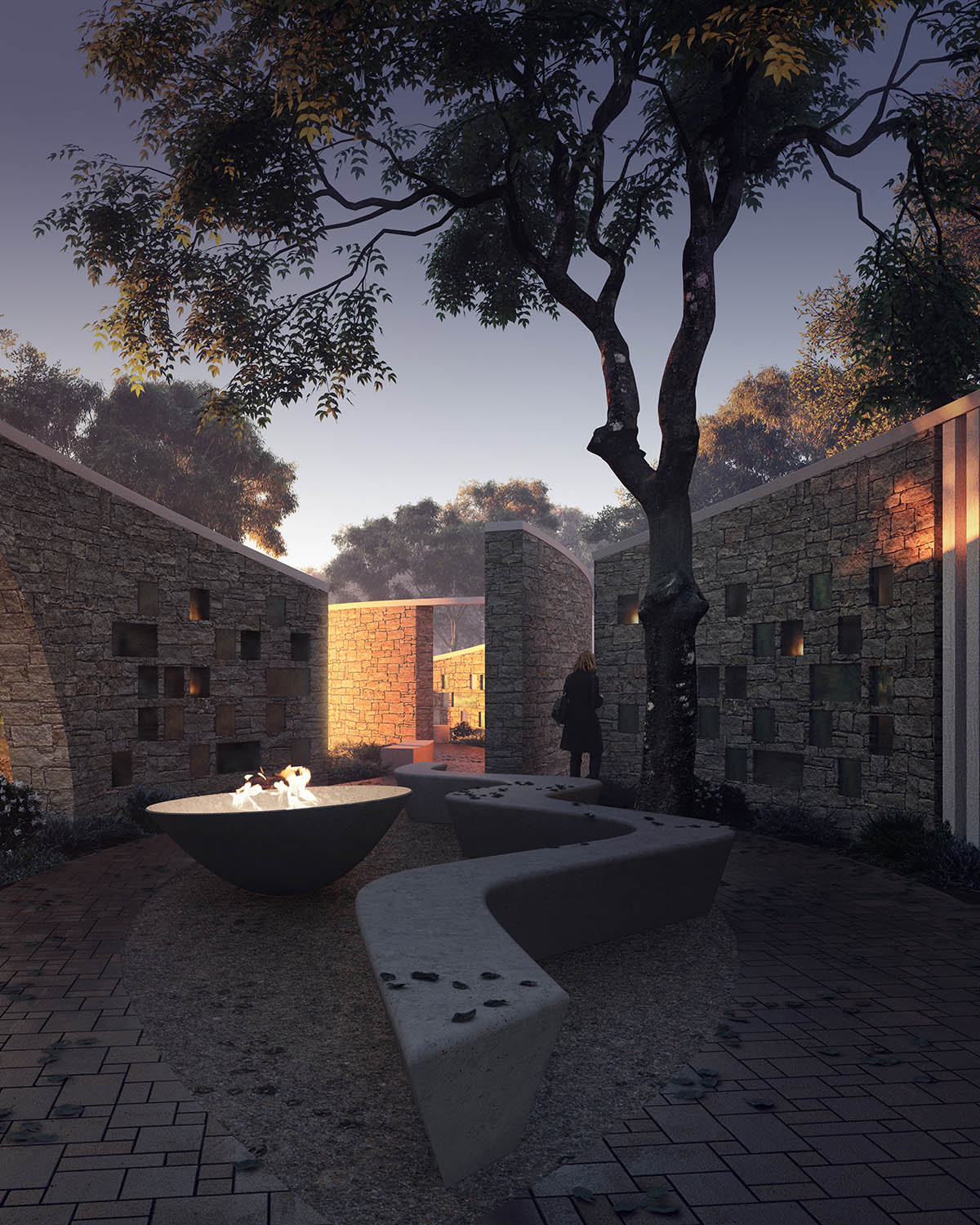 Flirting with eternity has long been the great romance of the committed architect. Connecting to something bigger and beyond itself is one of the lasting appeals of this art form.

Structures dealing with religious themes - burial and rebirth - embody in unique ways this existential intent. It has been, is, and will always be the chance for the collective to leave a durable trace of its presence on our planet. 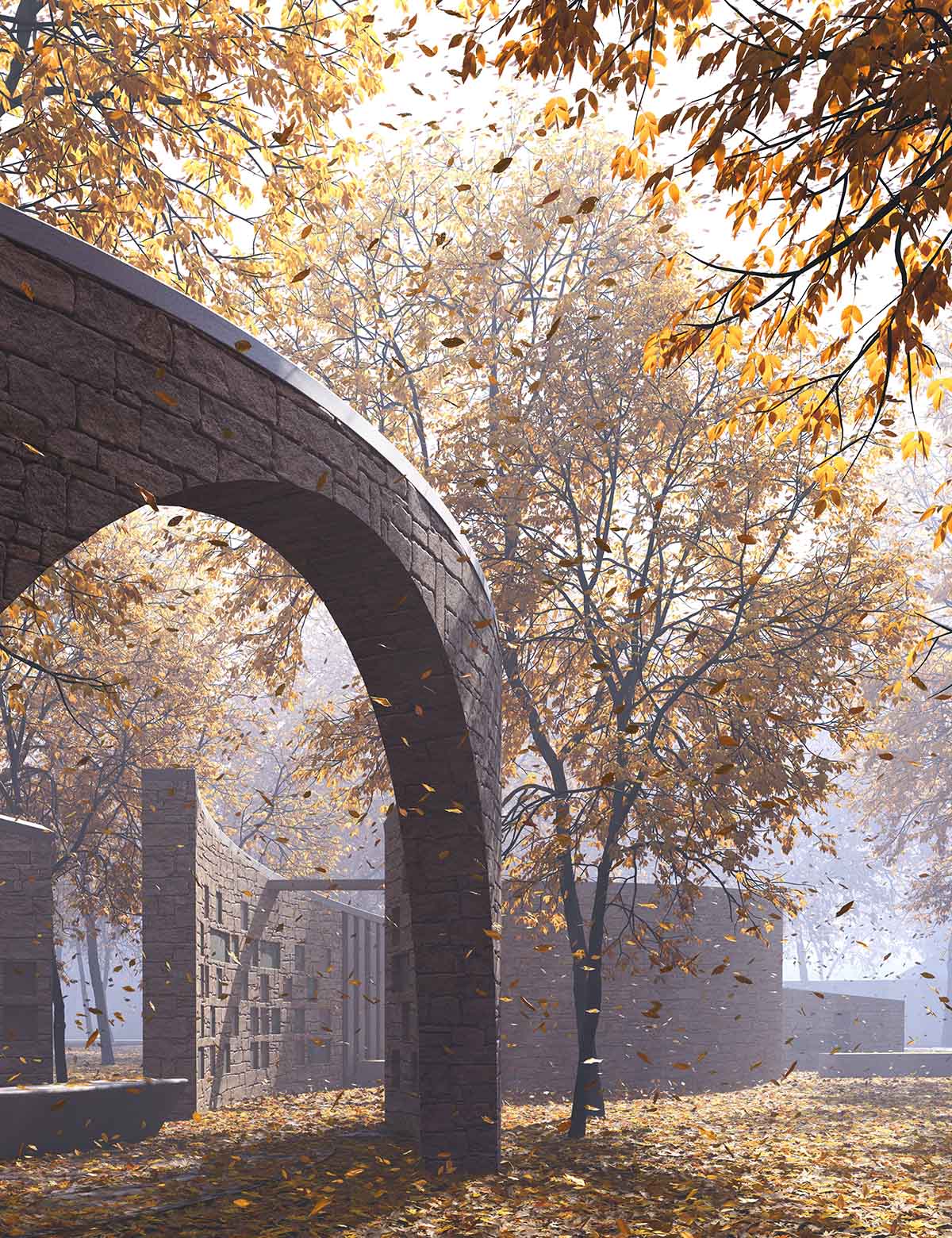 Form4’s Intertwined Eternities is a homage to this legacy. It is conceived as a place to meditate, to meander, to mourn, to record, to remember, to recommit. Natural light and the surrounding landscape are the silent companions of an environment where silence plays a big role in feeling this sense of lineage. The fluid geometry accommodates the slow steps of those engaging the memories of their loved ones.

These are gentle design gestures meant to hold the living in a metaphorical embrace to soothe their sense of loss, while offering solace through an architectural link between them and those lost.

The intelligibility of these curvaceous walls is part of their appeal. Part hardscape, part landscape, their spatial outcome is both exciting and calming.

Six arched segments exist independently while each is interrelated to the others. They can be read as two sinusoidal curves intersecting to create eye-shaped outdoor areas, as well as a labyrinth of stone walls creating a path of discoveries. In marking the ground with their thickness, they convey stability, authority, and timelessness. 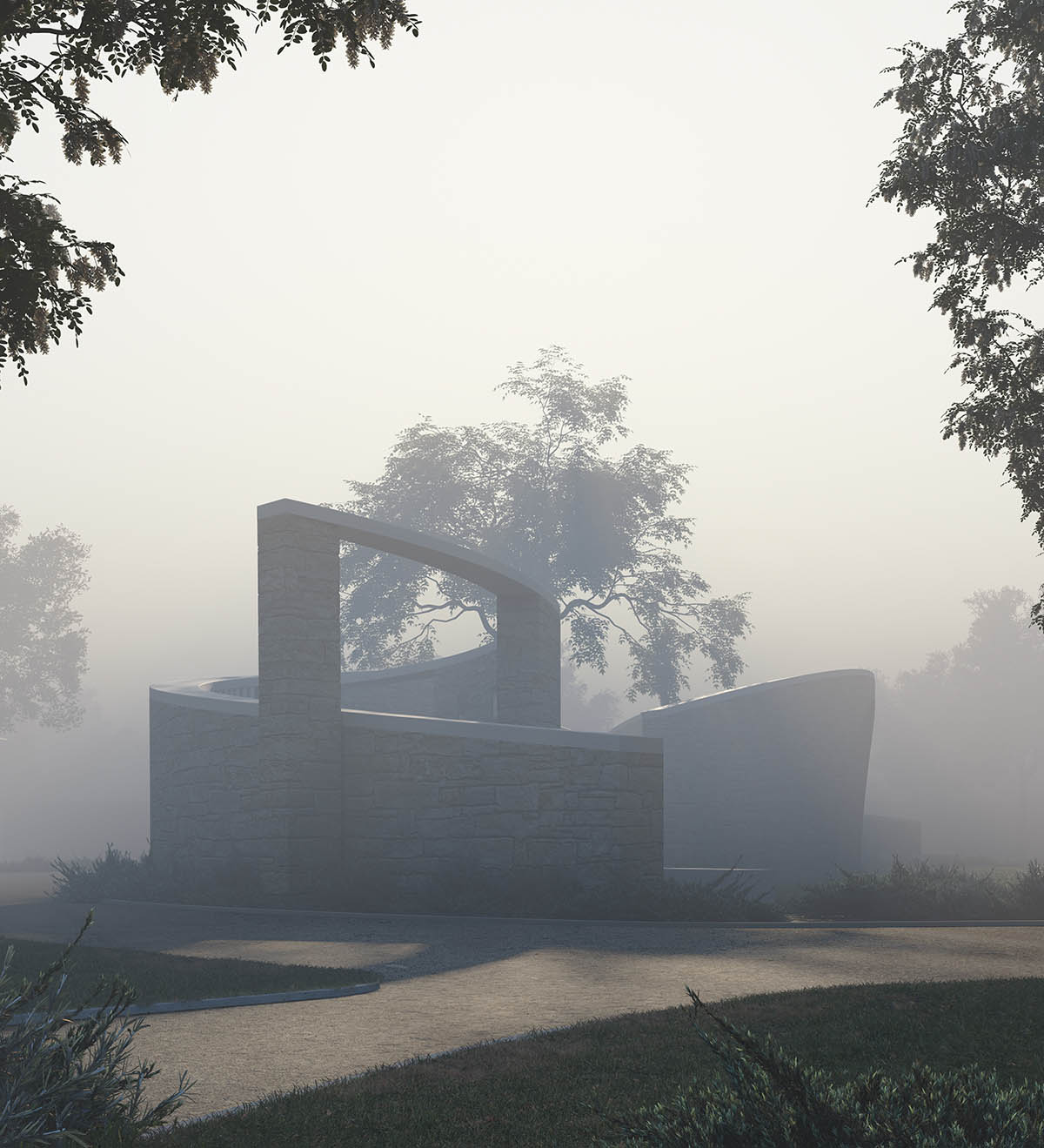 That width becomes a space of otherworldly inhabitation: hundreds of urns are located here according to a random pattern conferring additional vibrations to the texture emerging from the sunlight gracing its ragged stone surfaces. 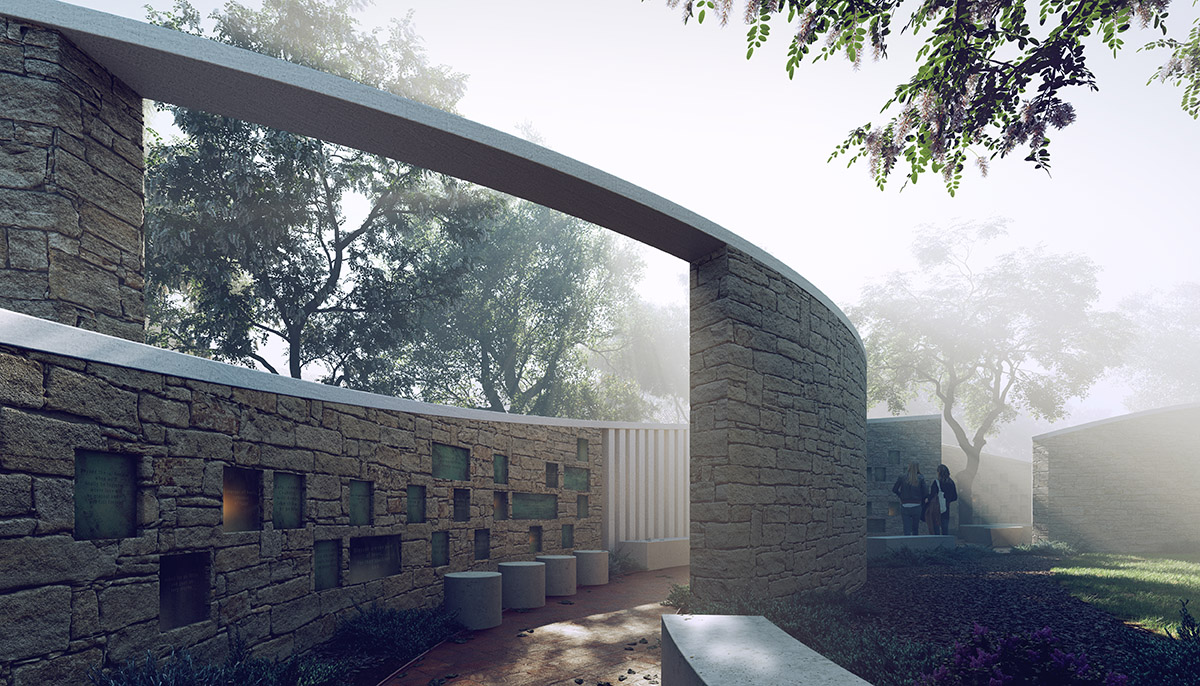 "The dynamic between heaven and earth, between life and death, is an eternal question, unanswerable solely with logic. It requires a combination of an open mind and a gentle heart. For architecture to approach these questions in a meaningful way we might turn to symbolism to engage the intellect and emotional experience to spark the imagination," Marx summarized.

"The role of architecture here is to invite the participation of the user, but to do so in a way that asks profound questions, that encourages the user to explore, rather than attempting to provide simple answers to complex issues." 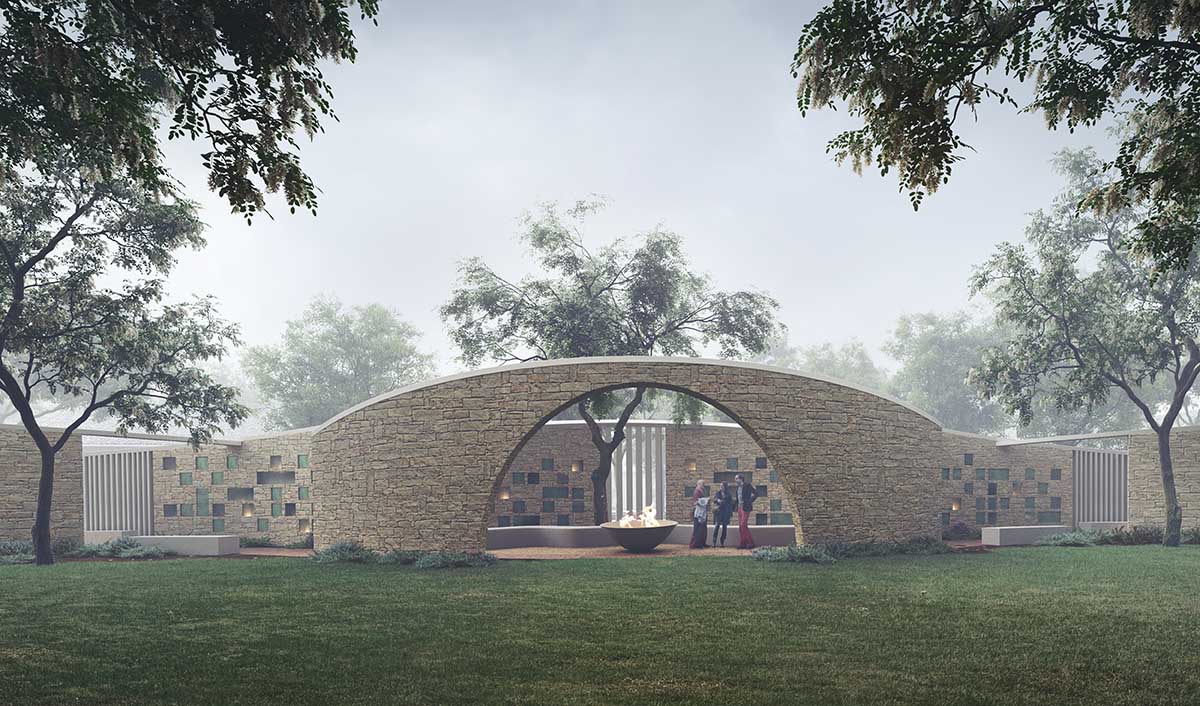 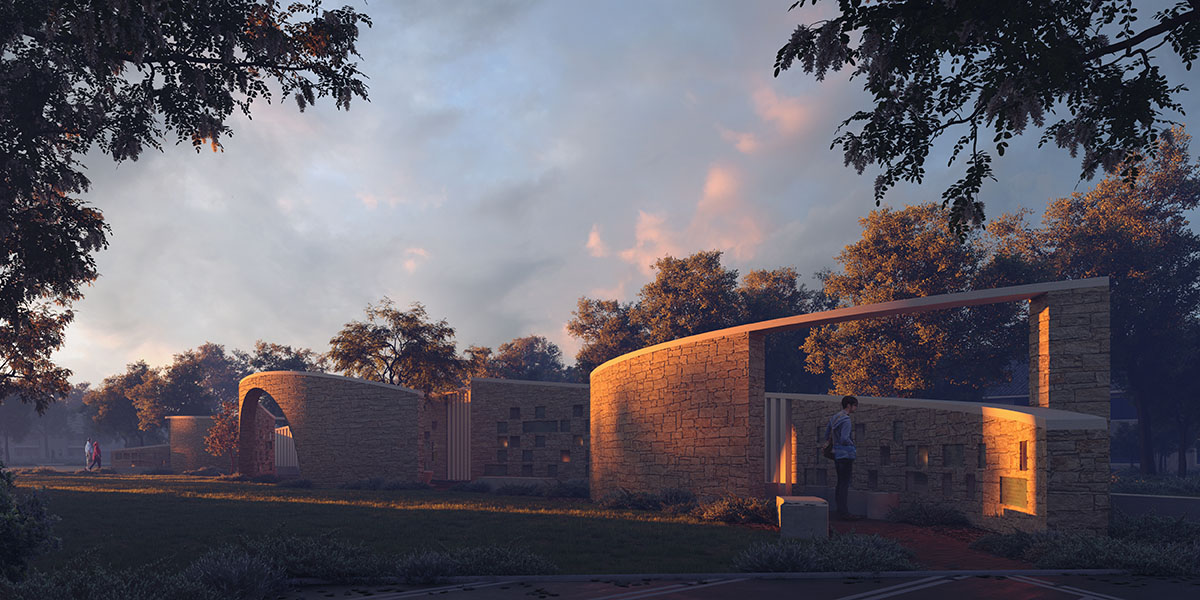 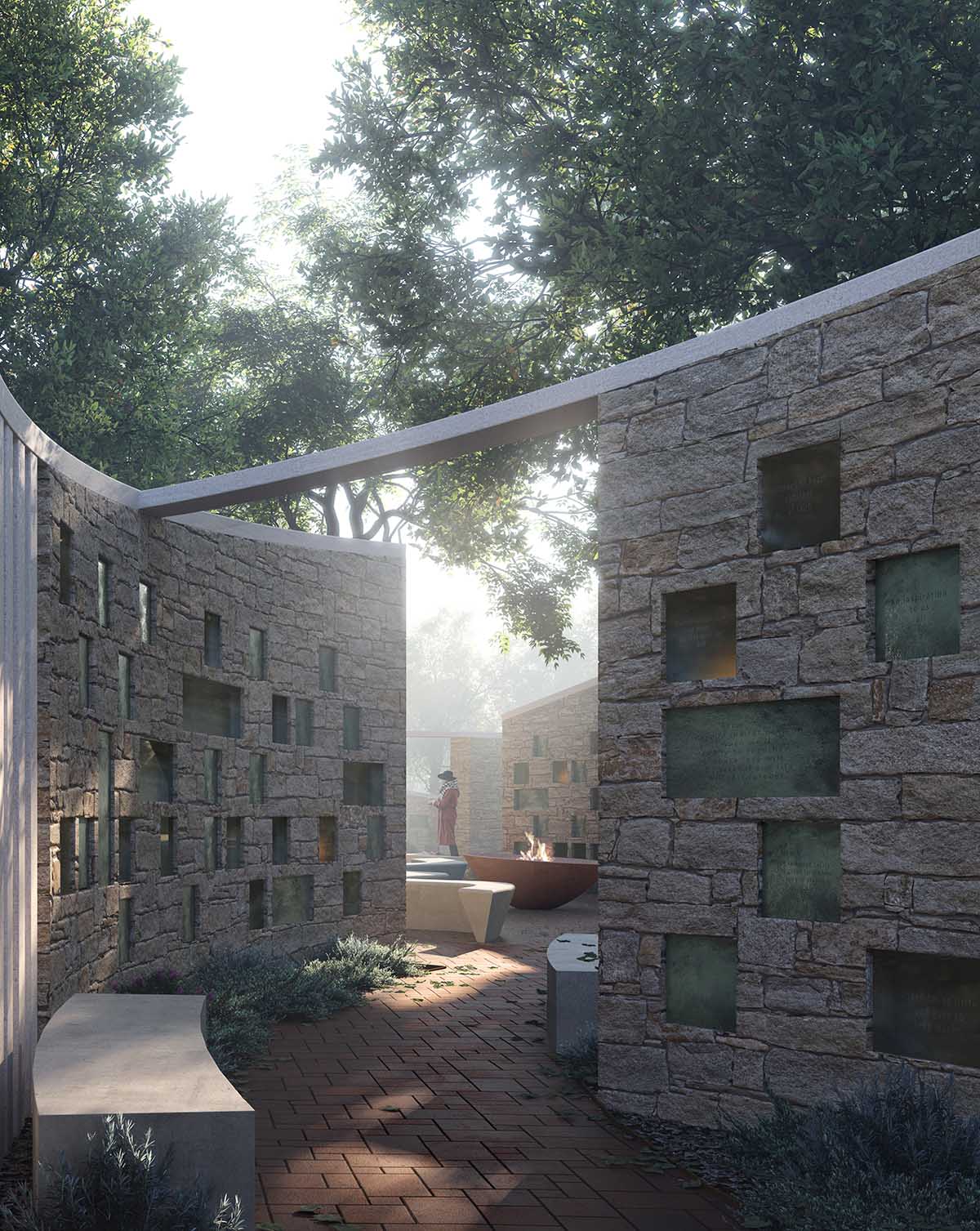 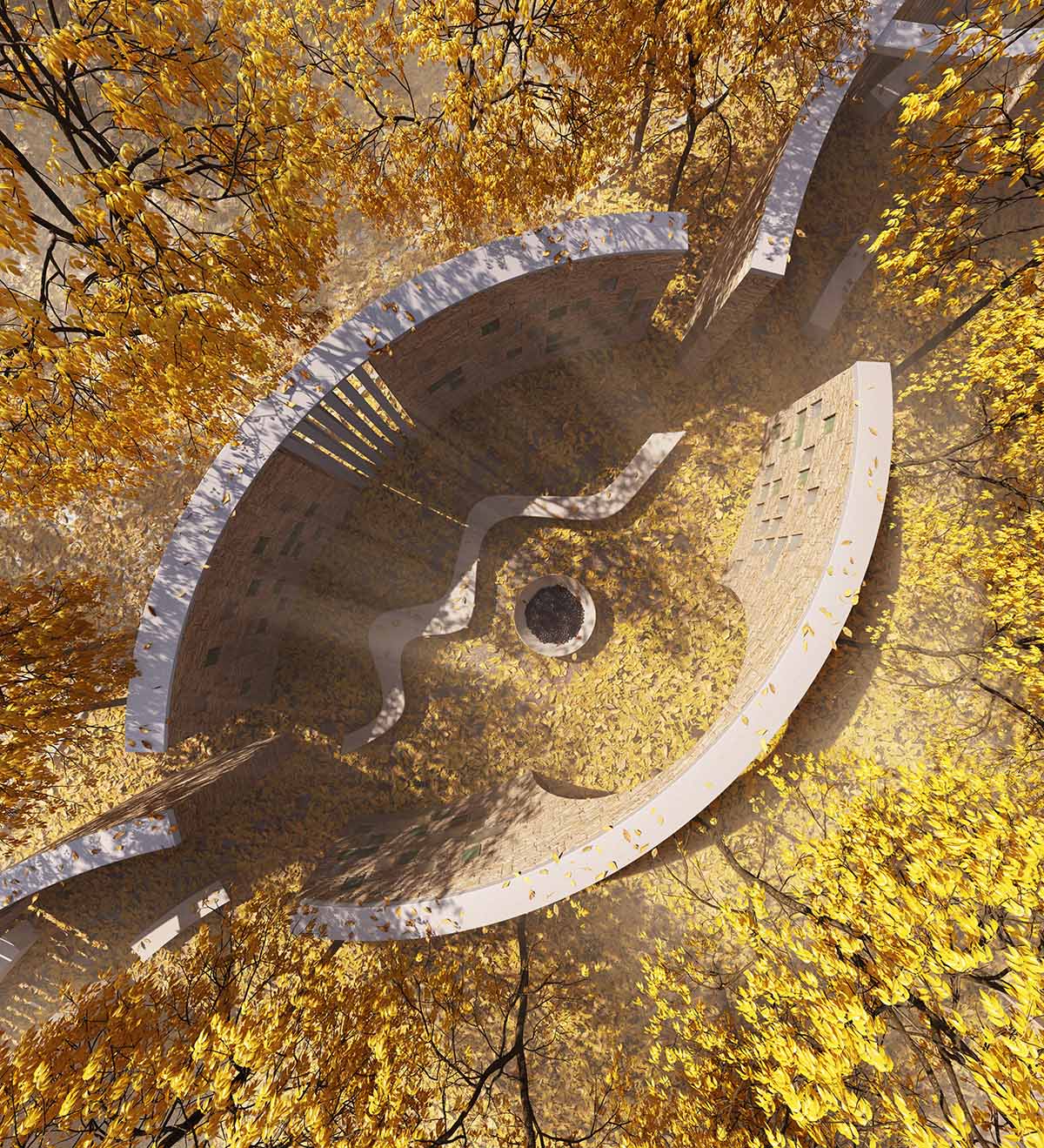 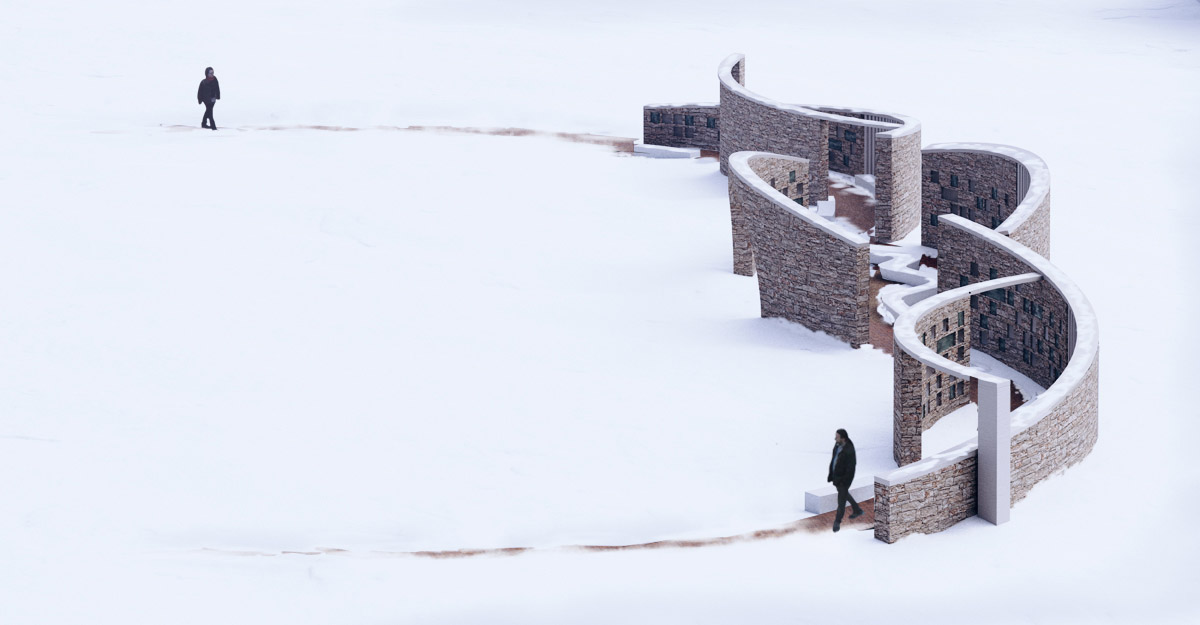 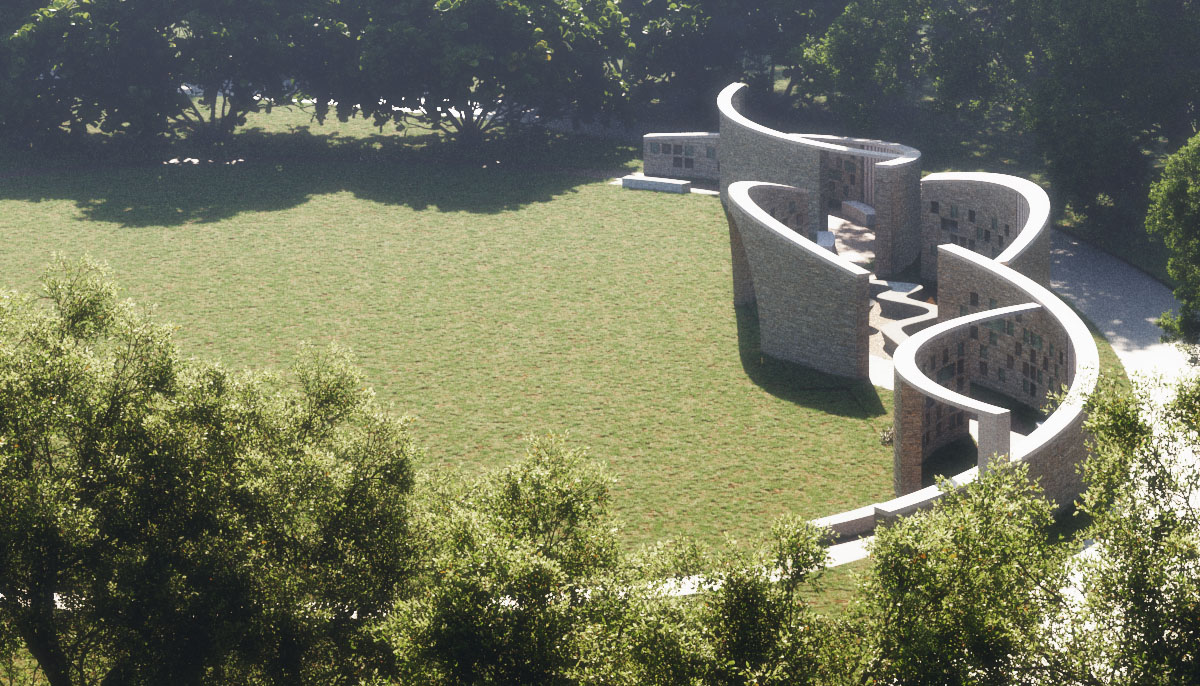