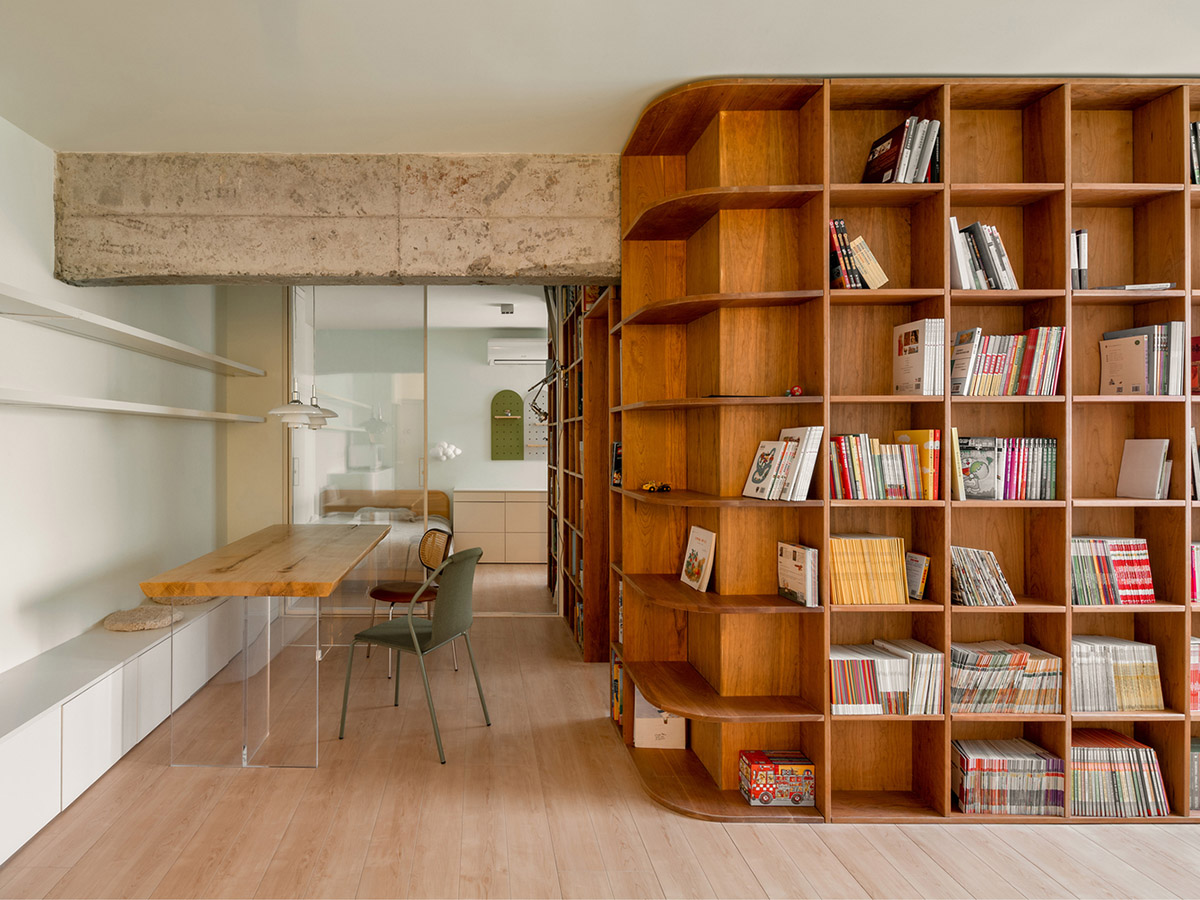 A cherry wood bookcase has shaped this house to create a flexible interior for a family in Shanghai, China.

Designed by Chinese studio Atelier D+Y, the house, located in an irregular school district of Shanghai, was renovated to meet the necessities of the family who always focuses on children’s learning and growth.

Considering the existing situation of the old house, the studio moved away from the traditional concept of halls and rooms, and reconstructed the spatial sequence within the house by adding a bold, textured bookcase.

While the bedroom is placed within the bookcase, children's room is designed in a separate room that the desk is placed in front of it, just  across the bookcase.

"With bookcases set as the house center, cooking zone, dining and reading areas, sleeping areas and other areas were well arranged according to their dynamics, which formed a gradual sequence that interact with the center," said Atelier D+Y.

The studio demolished almost all non-load-bearing walls in the house. To construct the wall for parents’ sleeping room, the team placed  three bookcases together with the thinnest bricks to ensure basic sound insulation. 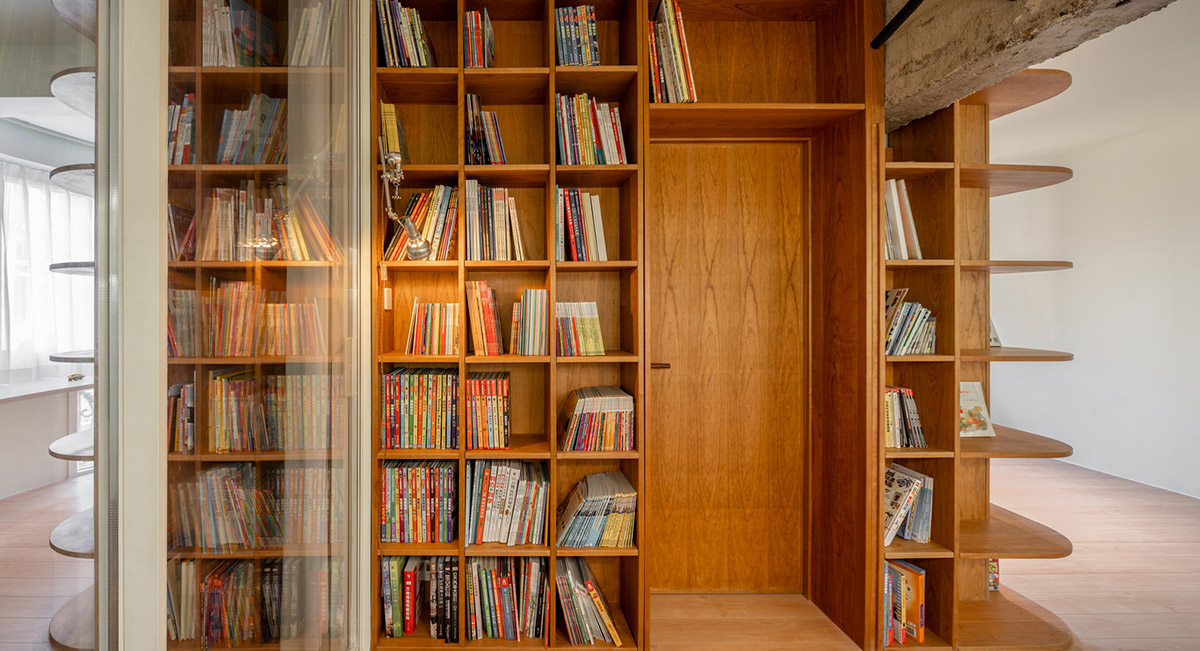 By doing so, more books would be placed and accessible from every functional division - such as living room, reading zone in the dining area, children’s room of the house.

The main goal of such organization is to cultivate children's habit of reading in the very first years of their life, according to the studio.

"We do believe layouts will influence the behavior of people living in the space," said the firm.

The studio added that "the house is designed in a gradual sequence. Here, cabinets serve more function beyond storage." 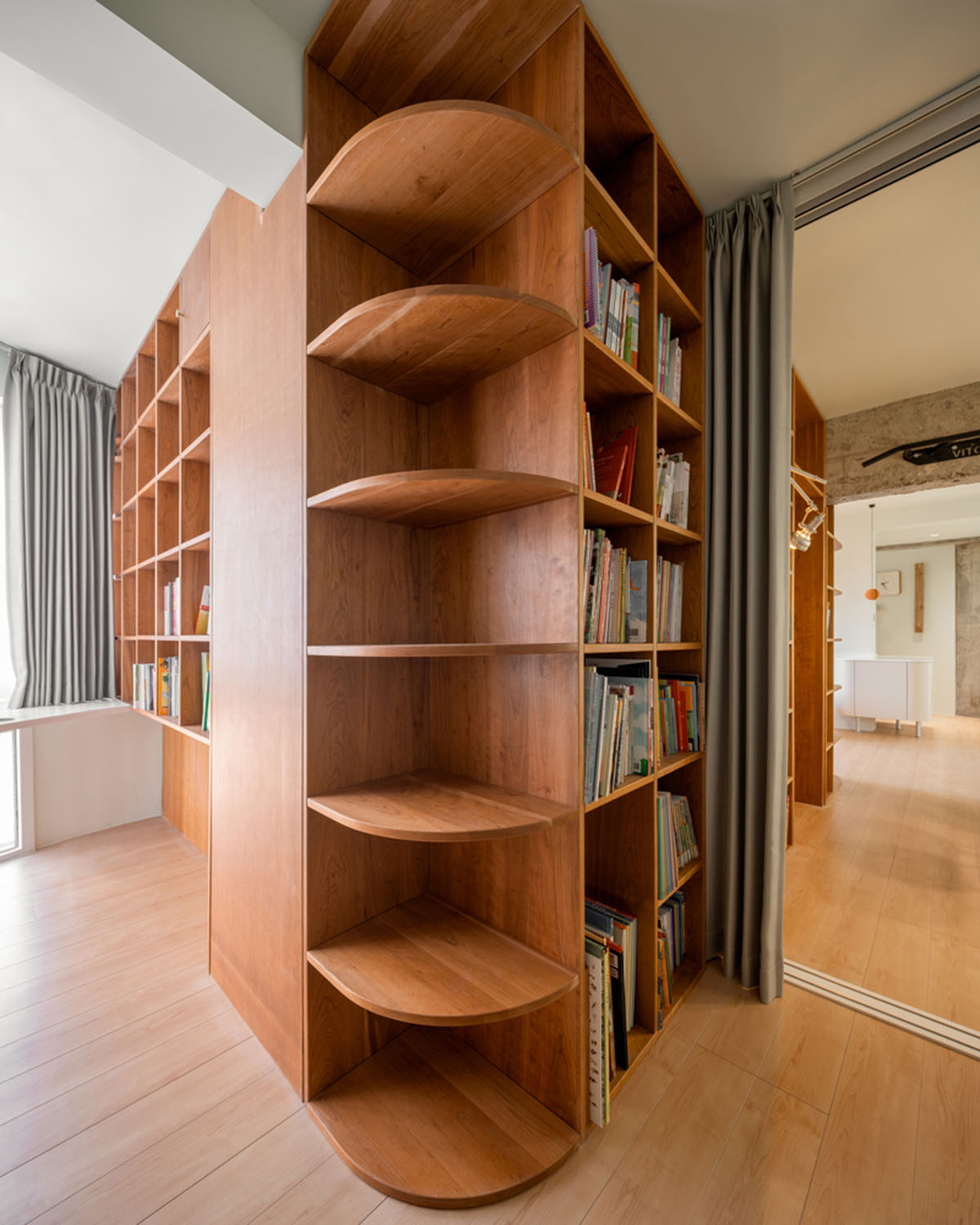 From the glass showcase at the door, the operation table where refrigerator and oven seat, the large long table where the family eat, study and make handicrafts, to the children’s room where private activities are carried out, the space in this house is open and in order.

In this way, the sightlines of family members will not be blocked, and the utilization of public space is maximized.

The large long table and bookcases become the center of activities, which is visible from both the bedrooms. 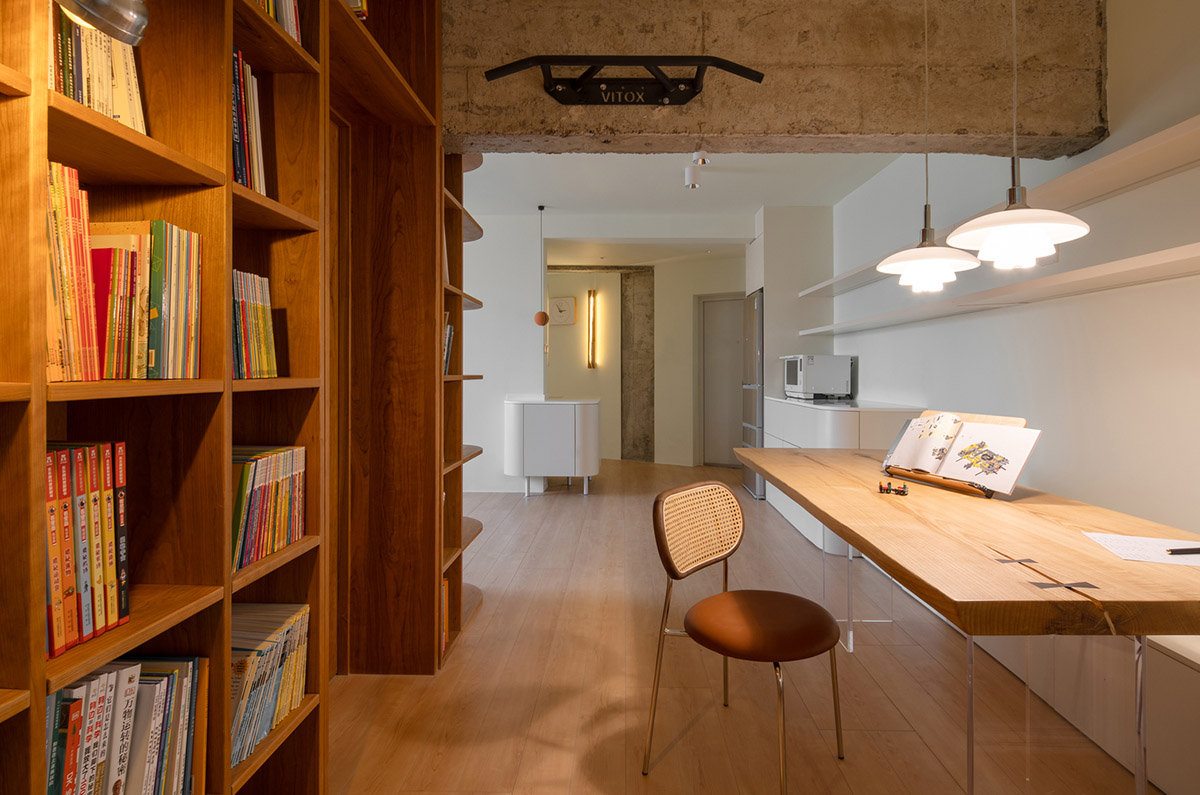 "Imagine how relaxing and reassuring the scene is when children are reading or doing homework, and parents are keeping an eye on kids while enjoying their own space. Again, the spatial layout reshapes residents’ behavior," added the studio.

The long shelf above the large table provides sufficient space for more books and toys. The width of the shelf reaches 4 meters, while it also increases the feeling of depth as it extends the space sequence horizontally. 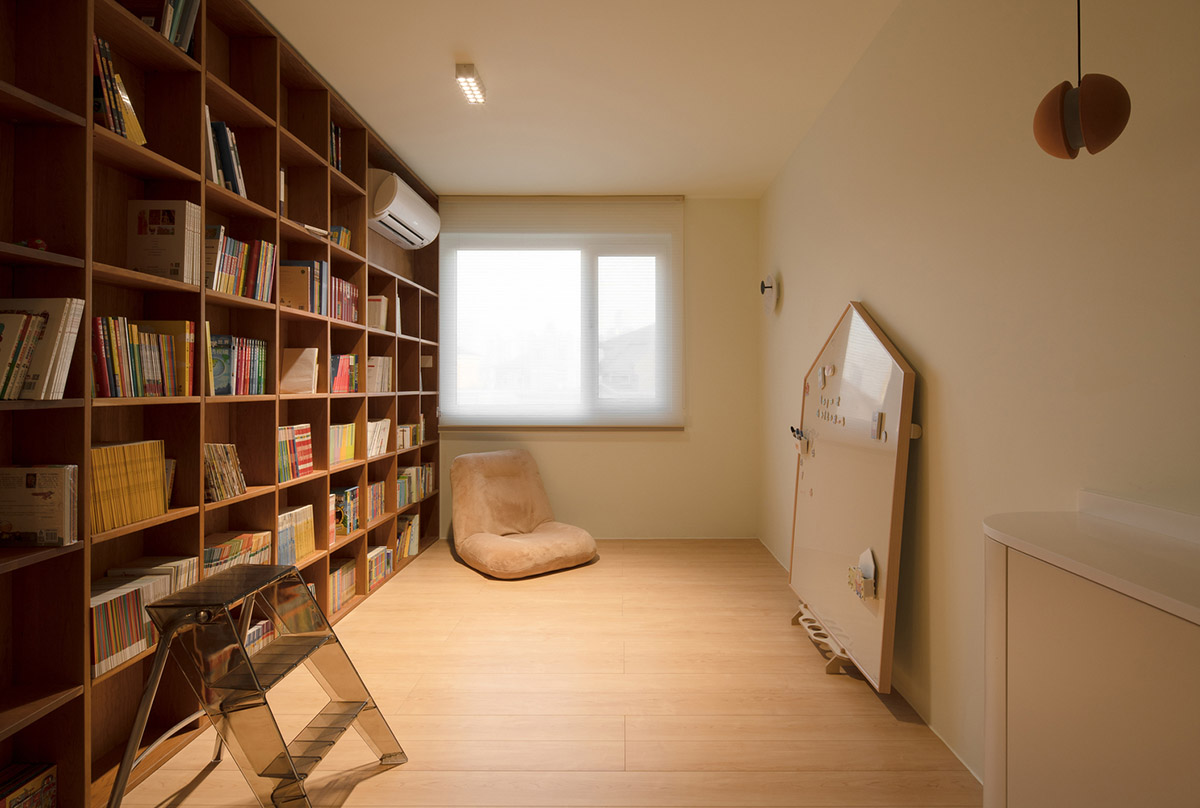 "We emphasized spatial dialogue to promote people’s dialogue in the space," the studio continued.

"Sticking to the belief that human behaviors are not supposed to be isolated, we reconstructed two sides of the irremovable load-bearing wall respectively into reading and chores area, so as to pose influence on people through space and encourage adults and children to spend more time in interactions or just enjoy each other’s company on equal terms." 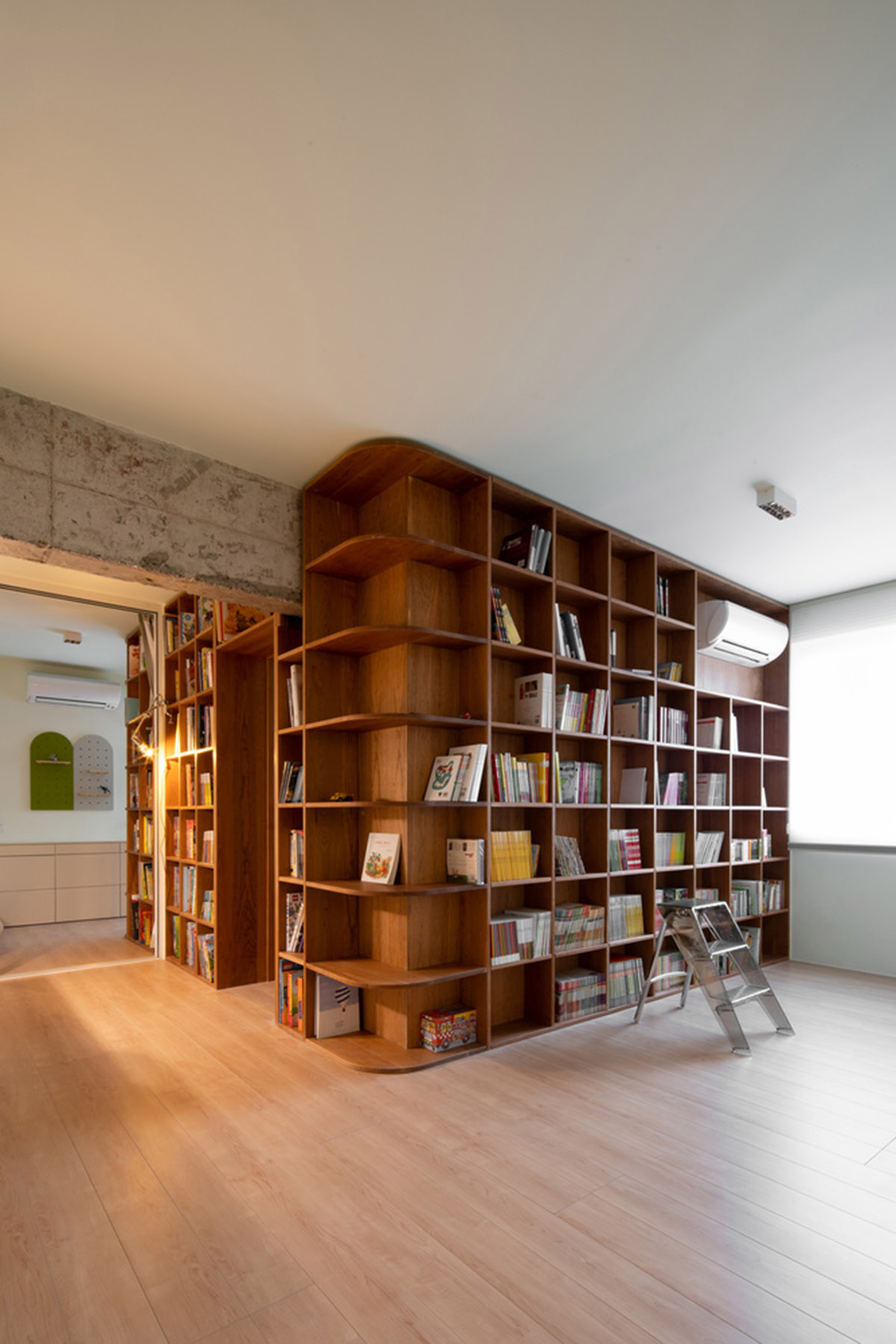 The space is designed with simple texture and structure, including the light chartreuse retro wall paint, cherry wood bookcases and furniture, as well as several concrete low beams, which were left exposed without decoration after demolition. With these quaint elements in the space, possibilities are opened for residents to recall the past. 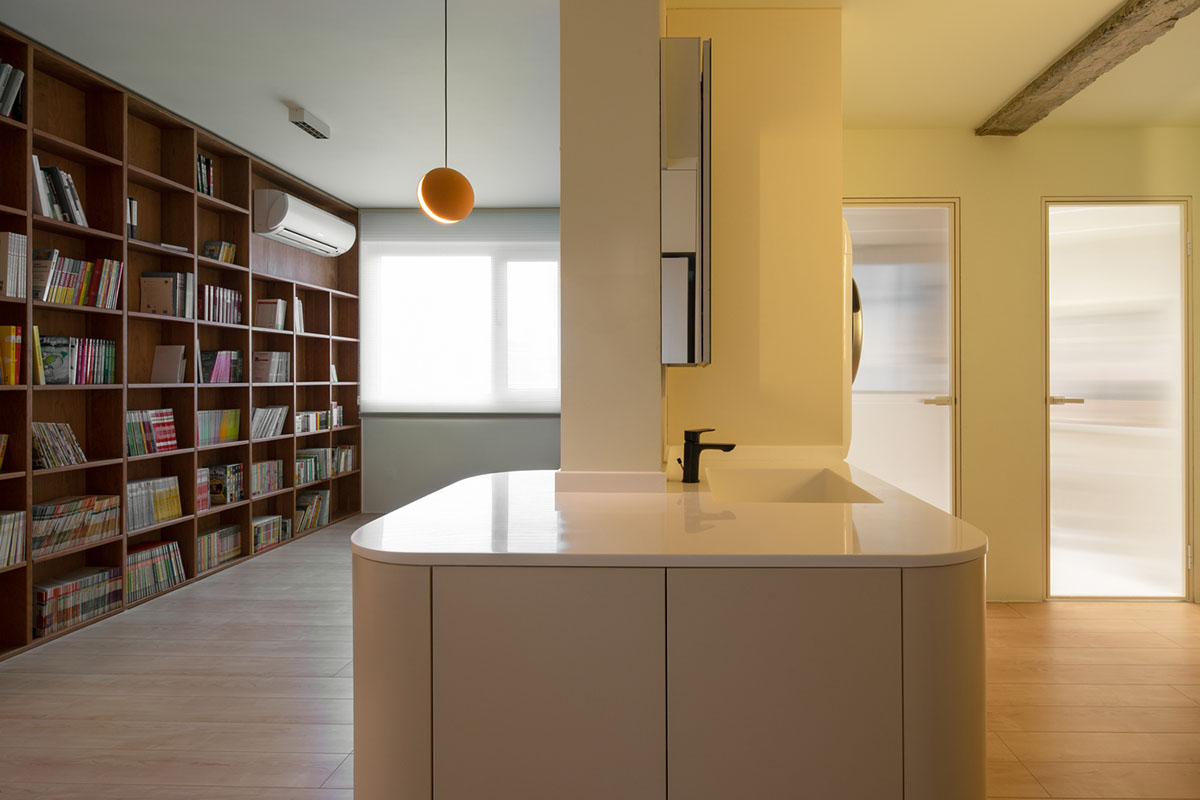 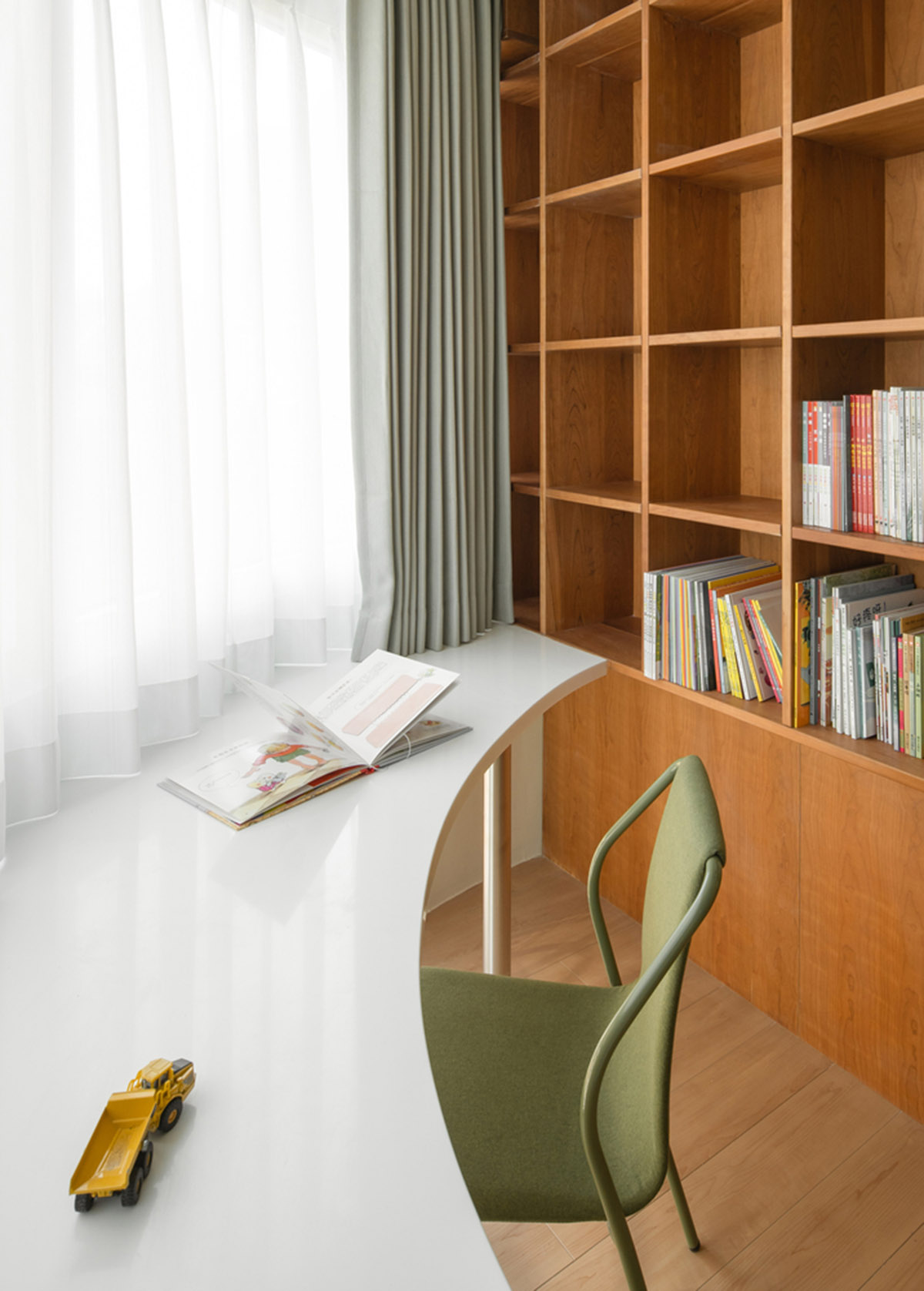 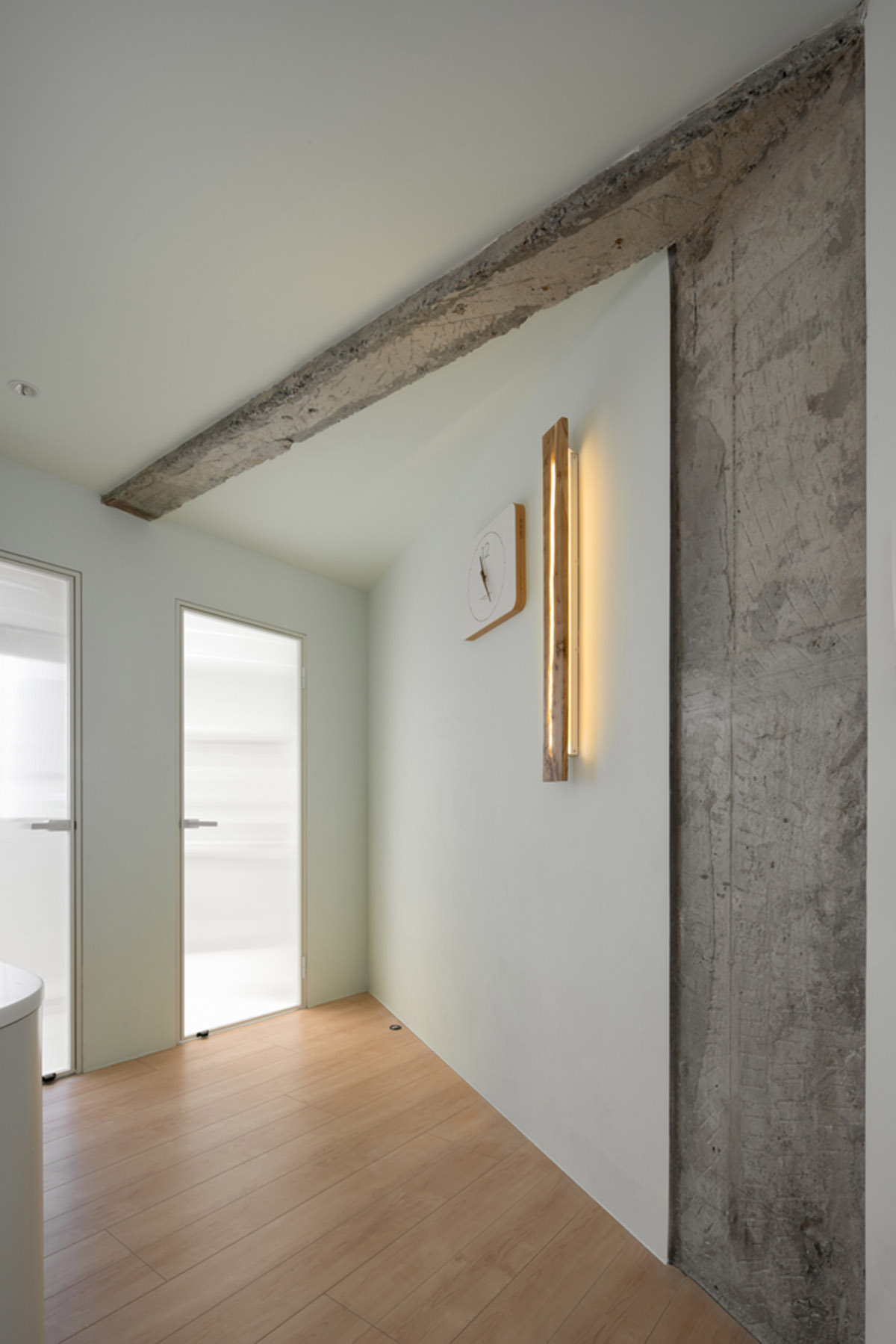 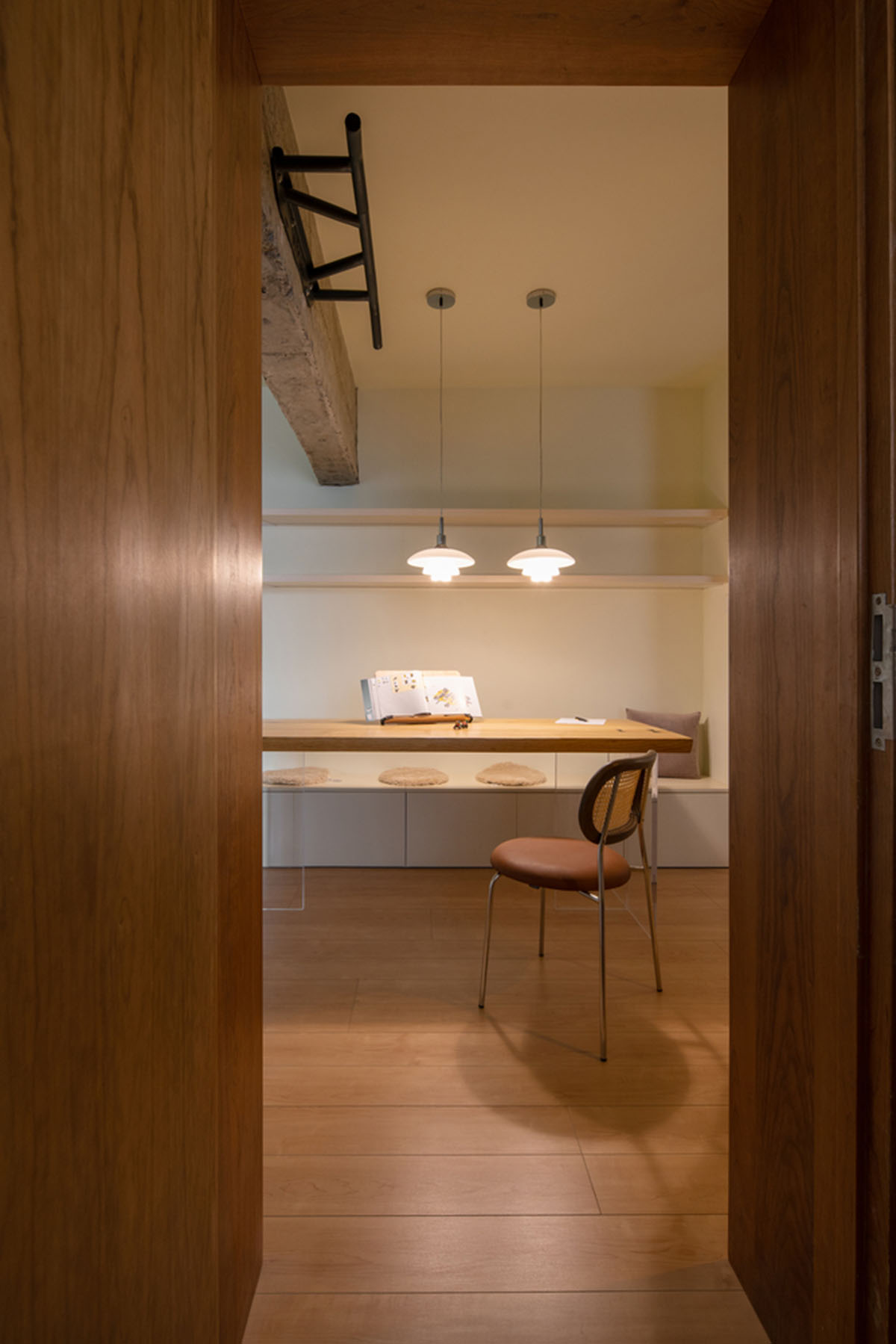 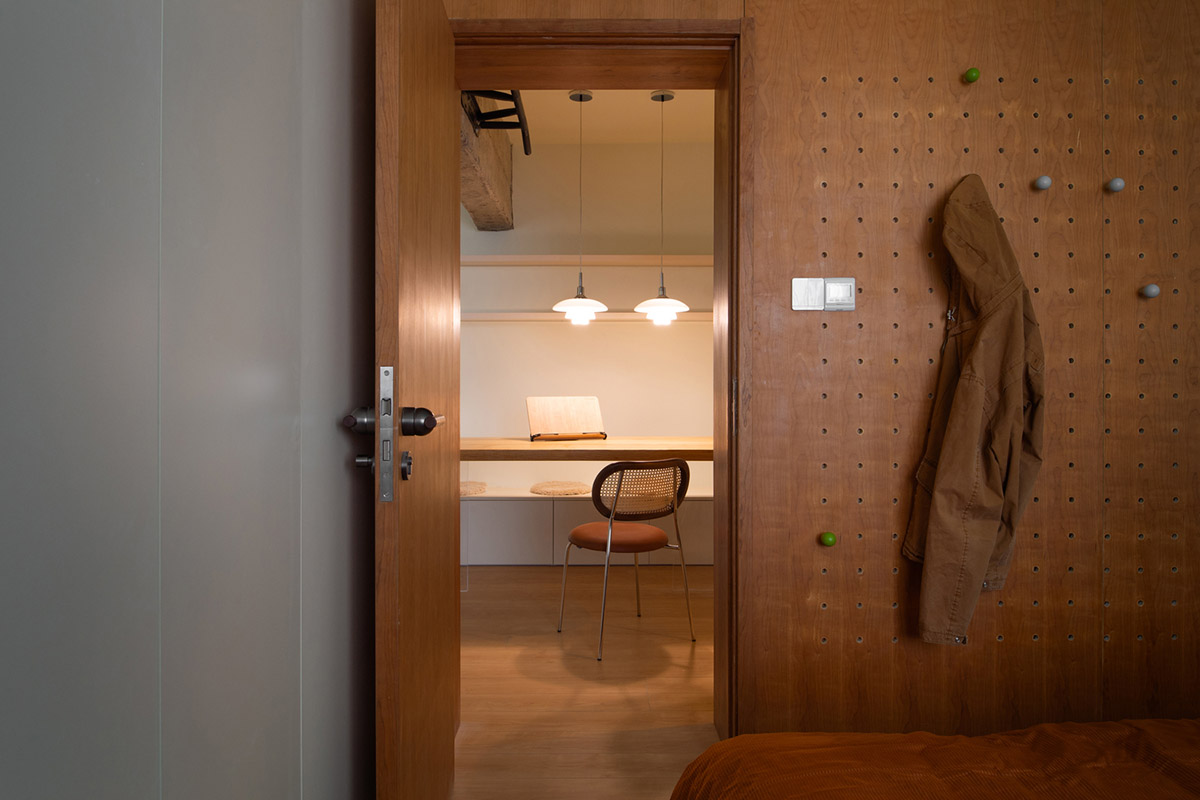 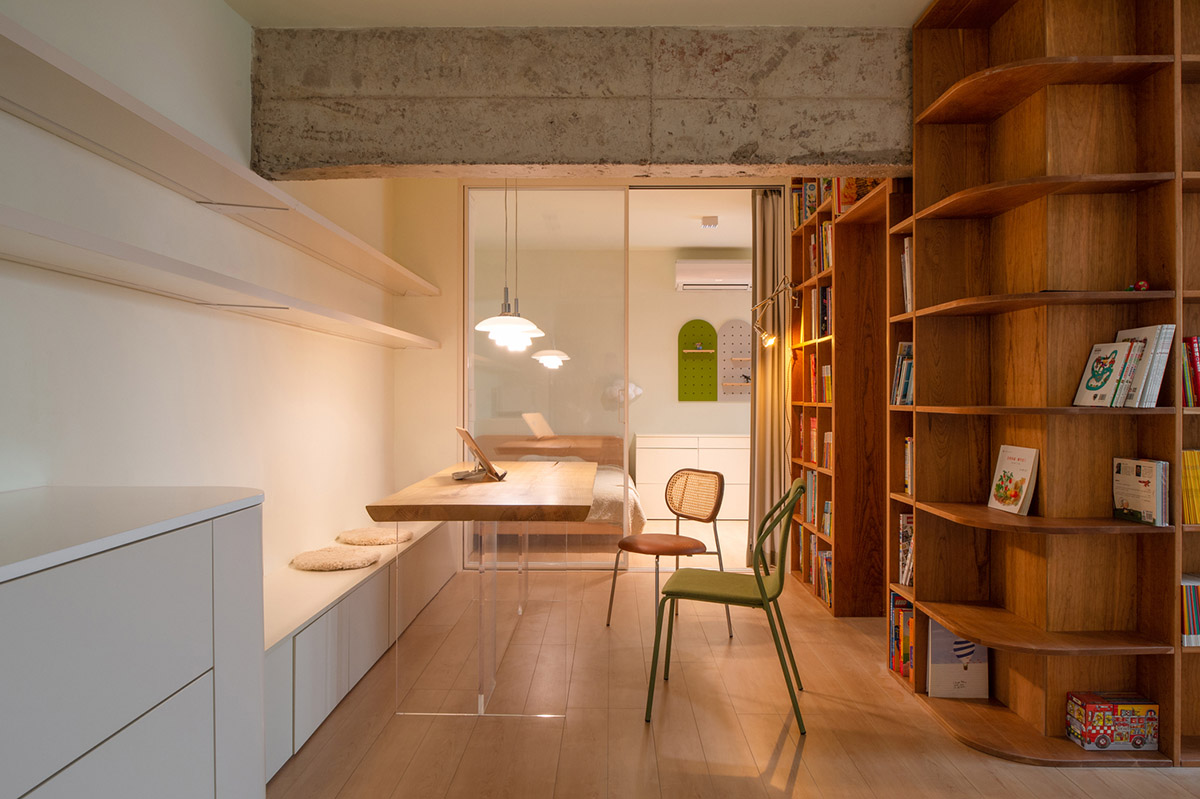 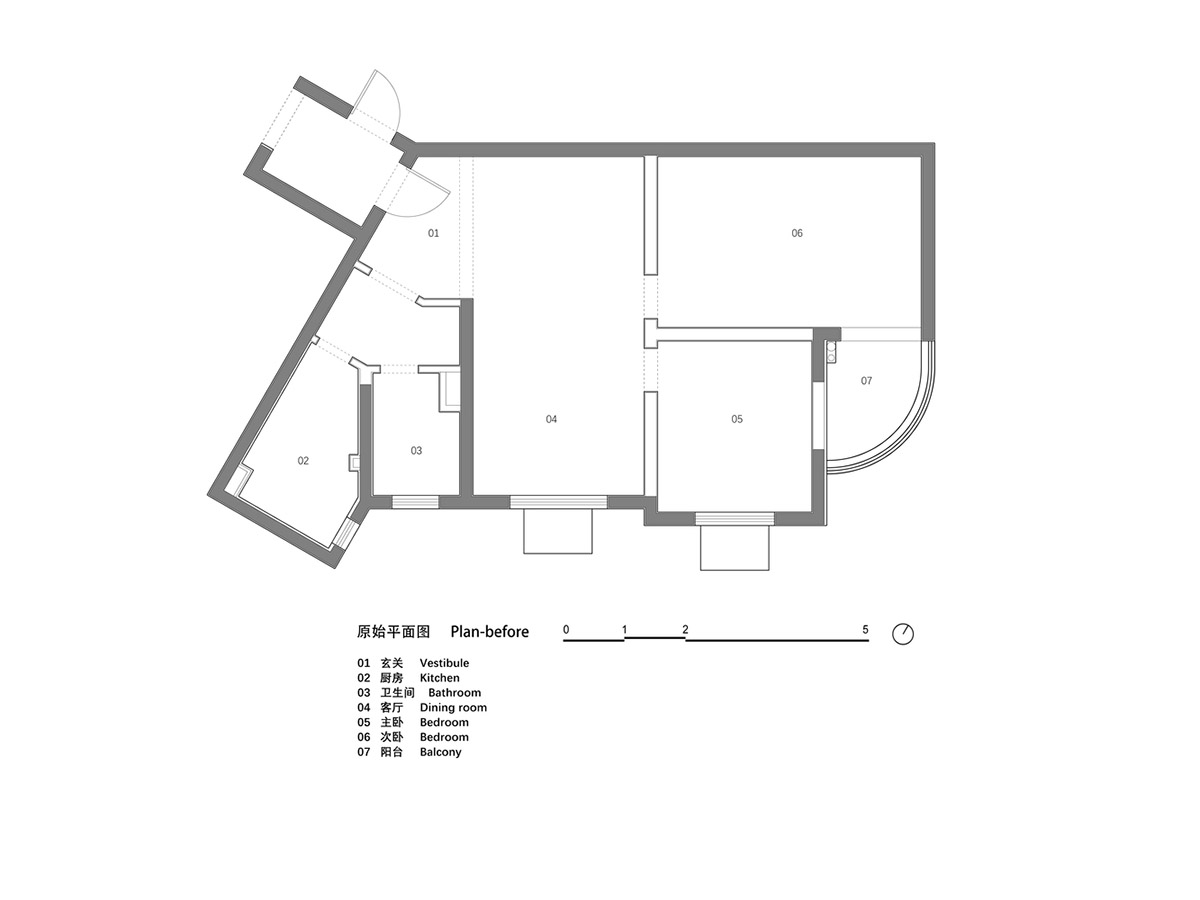 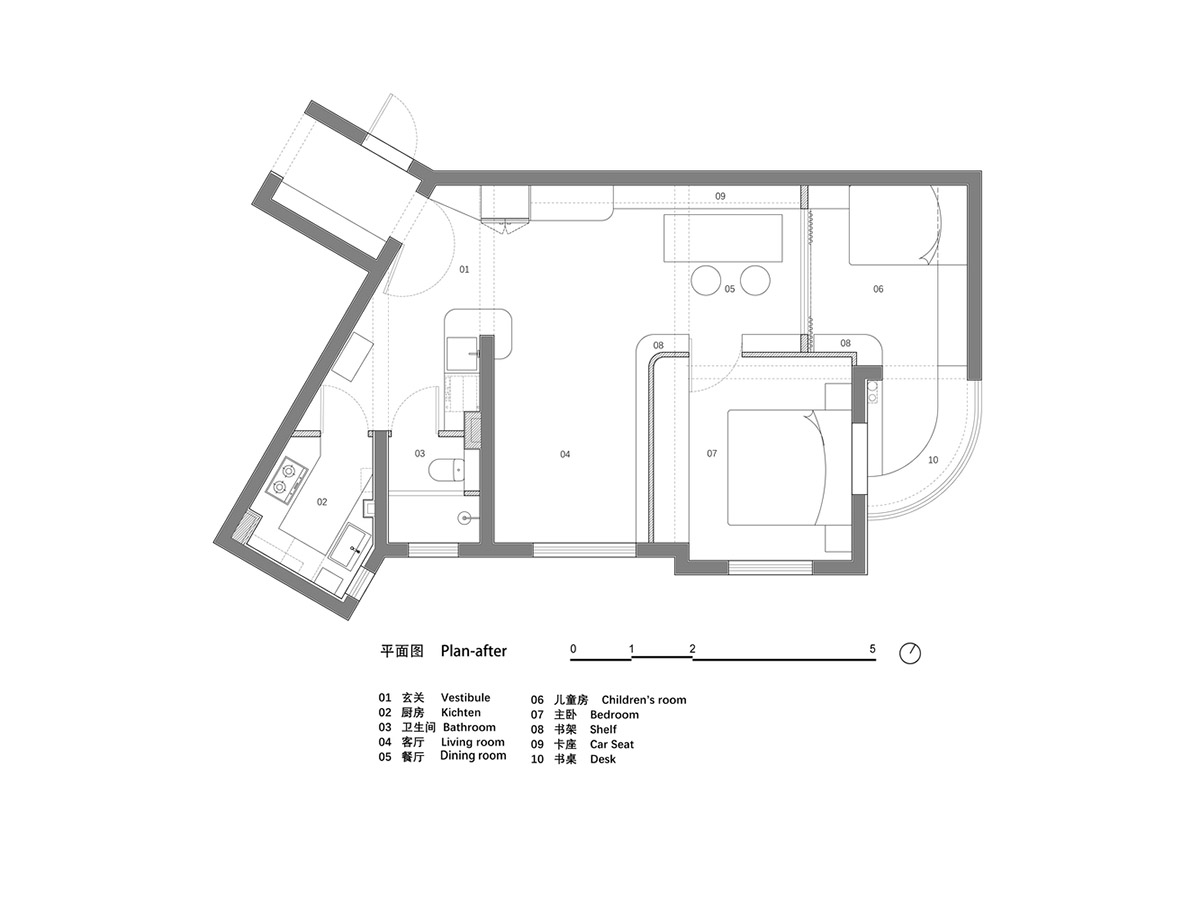 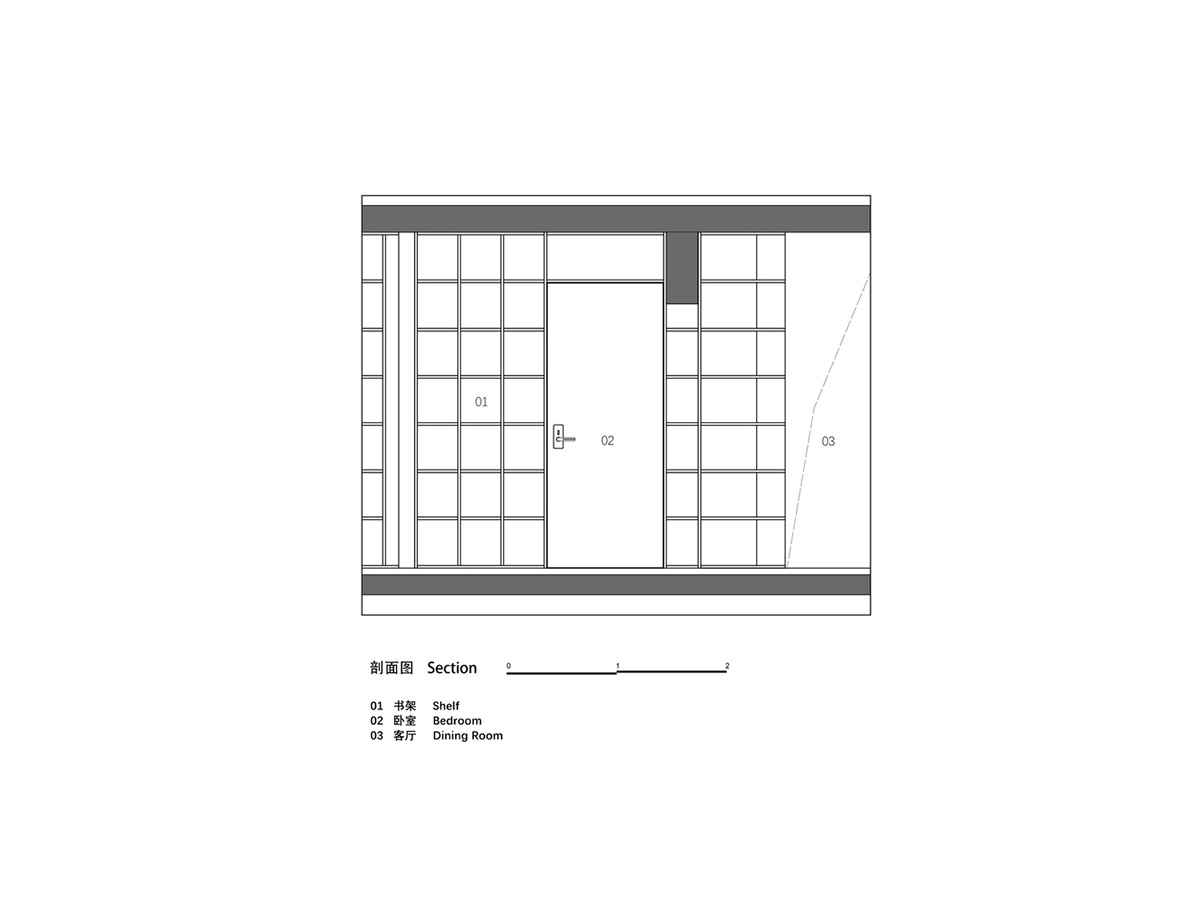 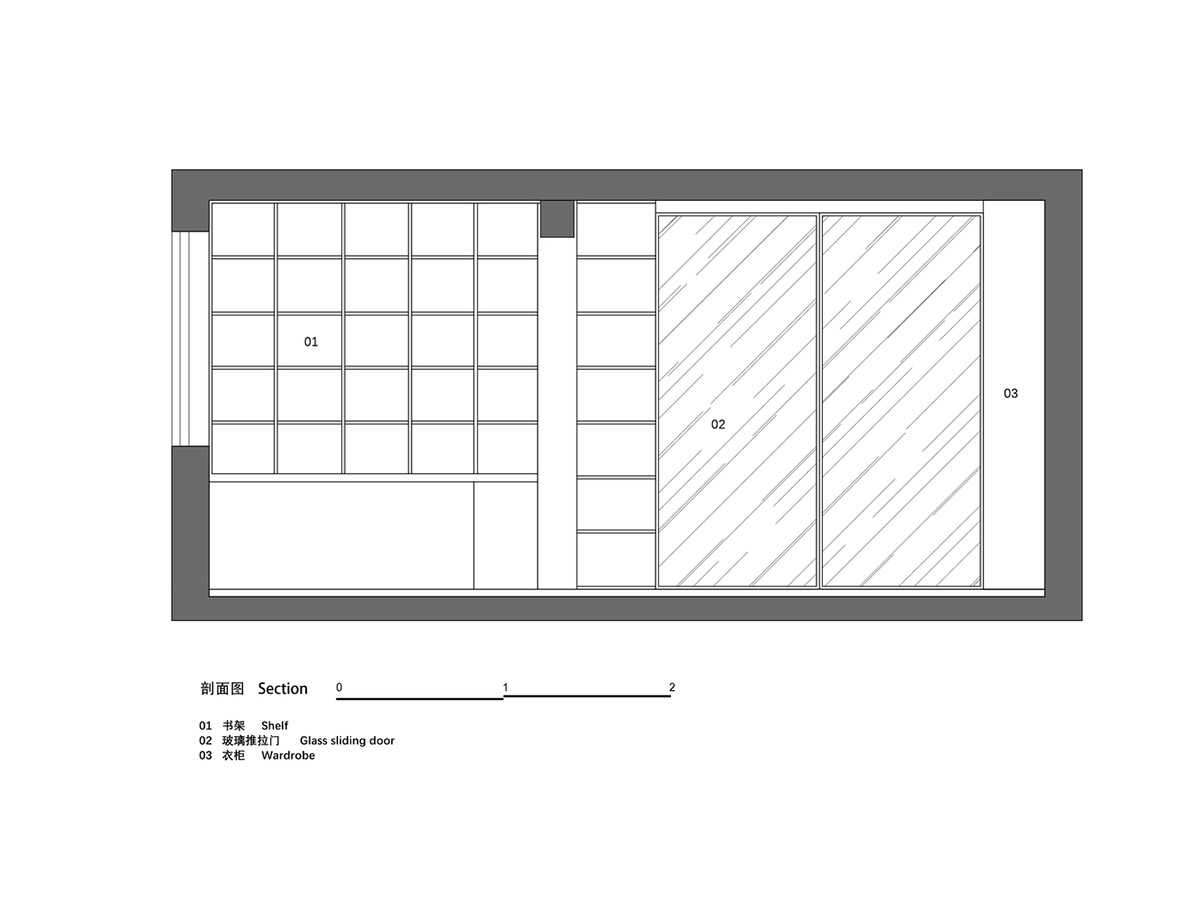