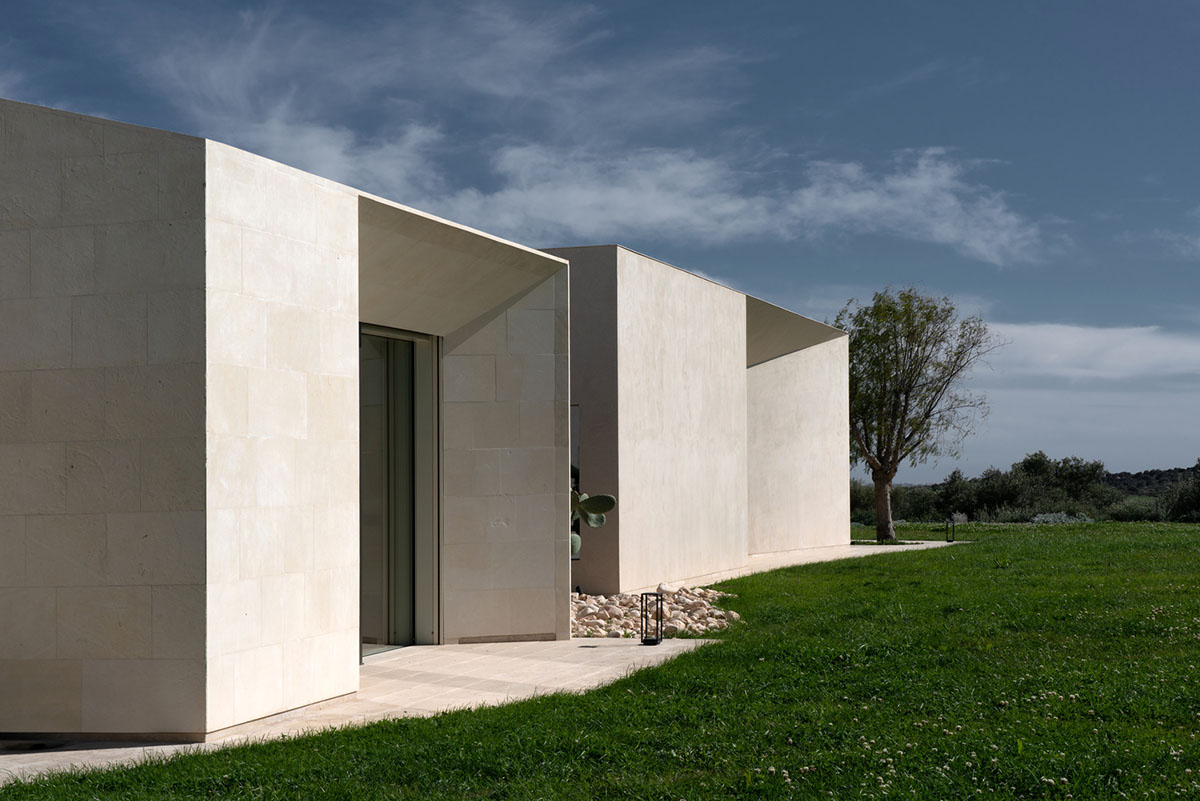 Named Villa In Noto, the residence was designed on a hillside overlooking the Vendicari Natural Reserve a few kilometers away from Noto.

Made of three distinct volumes that are connected a central corridor, the house was designed for a Milan family and is arranged in three large distinct geometrical bodies that capture the mesmerizing views from its surrounding.

Embedded in an olive garden, the residence aims at become one with the landscape and the horizon. 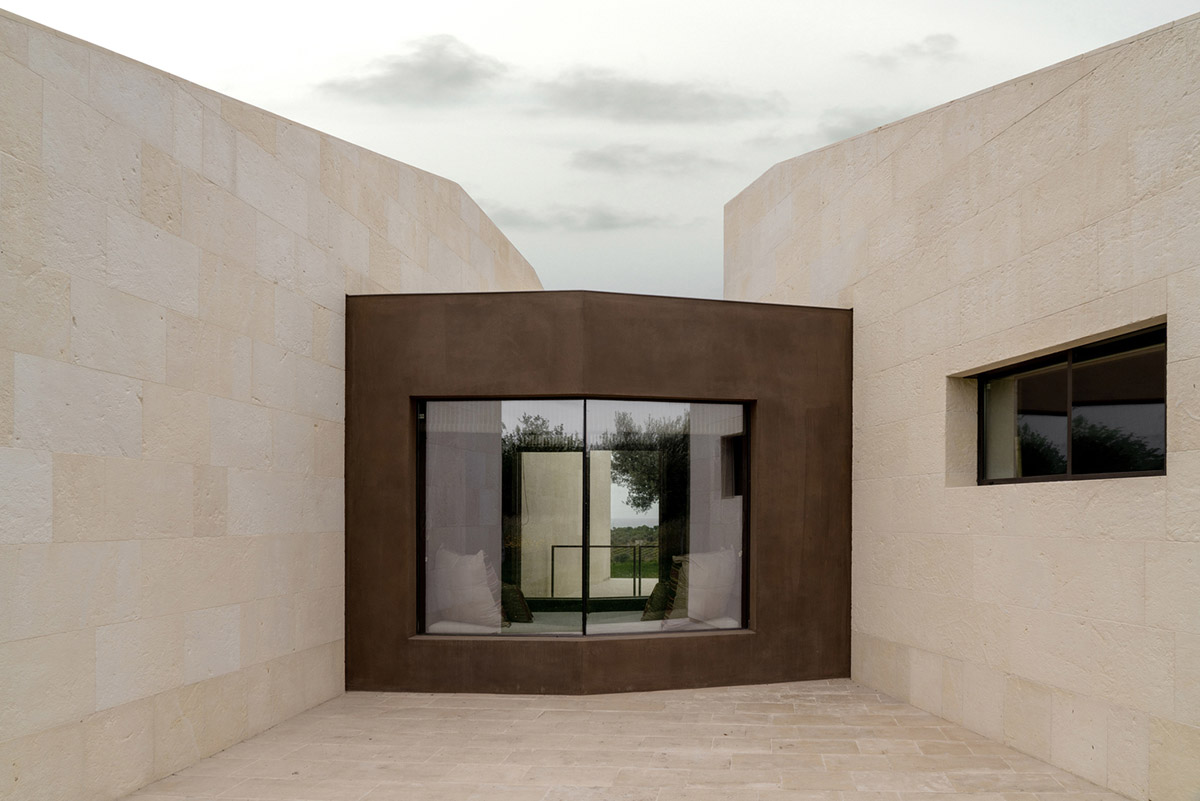 The architects are inspired the contextual references of the site, as the team wanted to create an "ode to the landscape" starting from the material volumes that make up the house.

"We also incorporated a large fruit tree, to stress the connection between domestic life and the natural element," said Laura Franceschini, partner at Westway Architects. 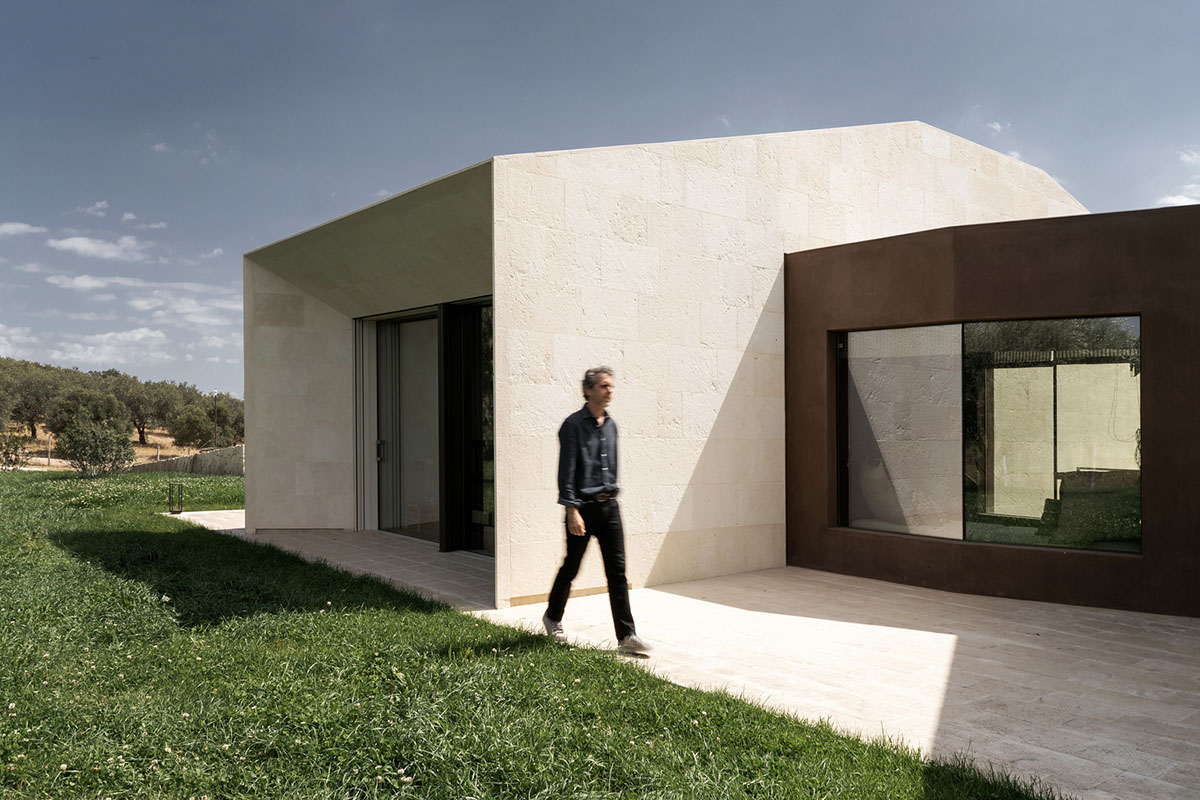 Functional program of house is distributed into the three volumes; while the largest block defines the day living area, the two smaller volumes are dedicated to private areas, like bedrooms.

"One of the blocks stems from the rupture and rotation that amplifies the relation-opposition between the two and underlines their geometries," Westway Architects partner Luca Aureggi added. 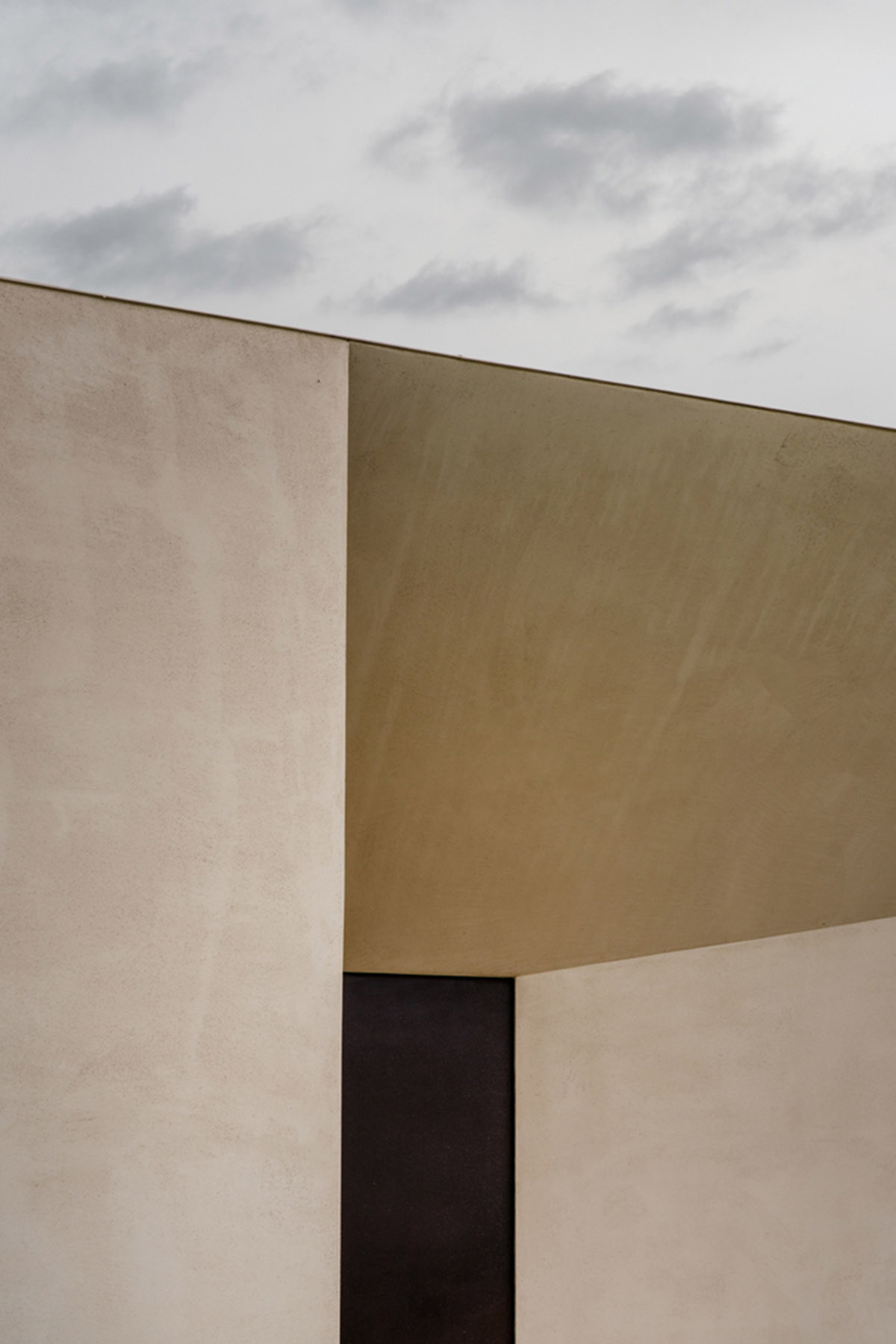 The studio aimed to give strong references with materials, textures and colors in which the area is represented with these traditional components.

The architects preferred to use a Noto stone to clad the architectural volumes, while the darker Modica stone is used for the exterior flooring. 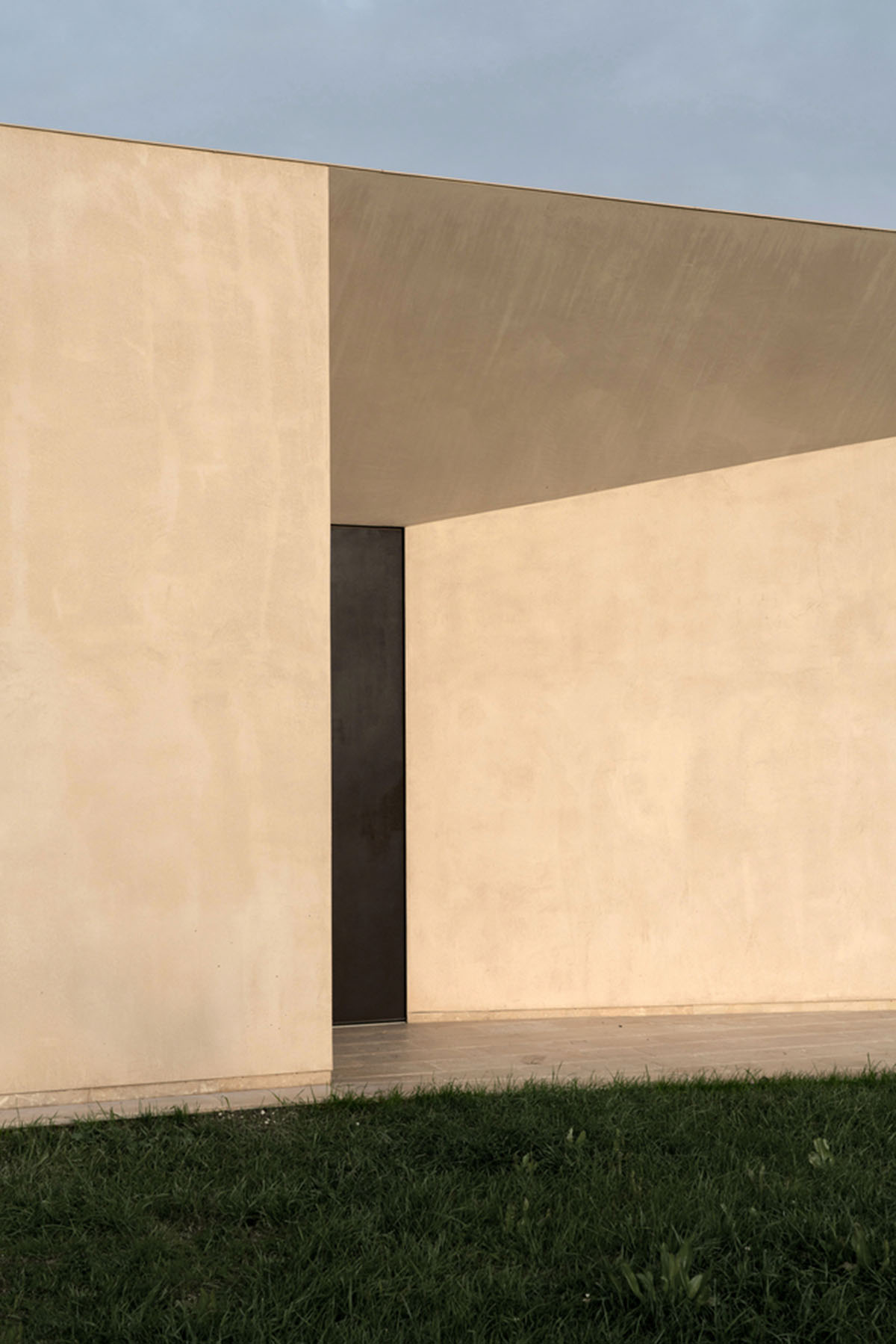 Brown plaster outlines the corridor that crosses and connects all the house’s spaces. "The colour choice derives from the intention of juxtaposing the dark, almost compressed, longitudinal space with the more ample spaces of the rooms, which are inundated by natural lighting," added the studio. 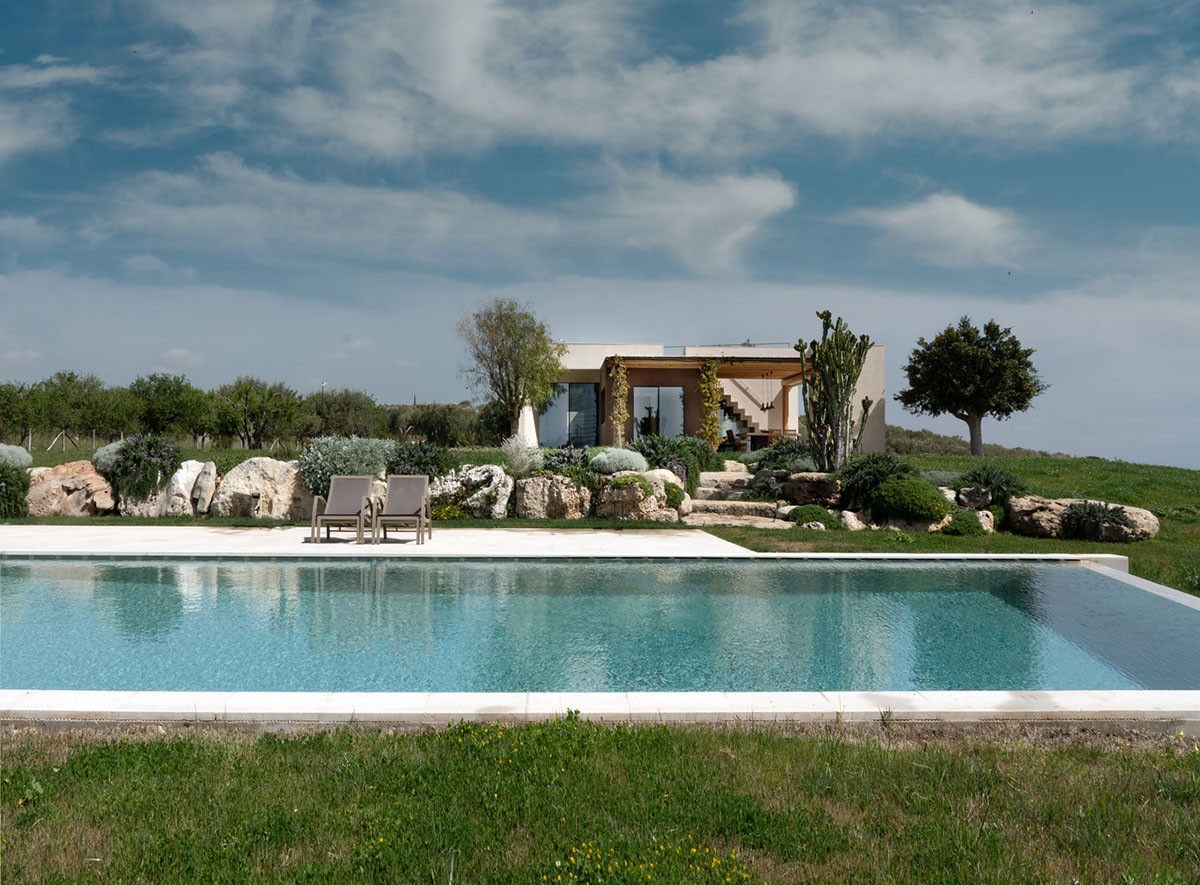 Even glass is among the main materials chosen, so as to guarantee and osmotic relationship between the interior and the exterior of the house. 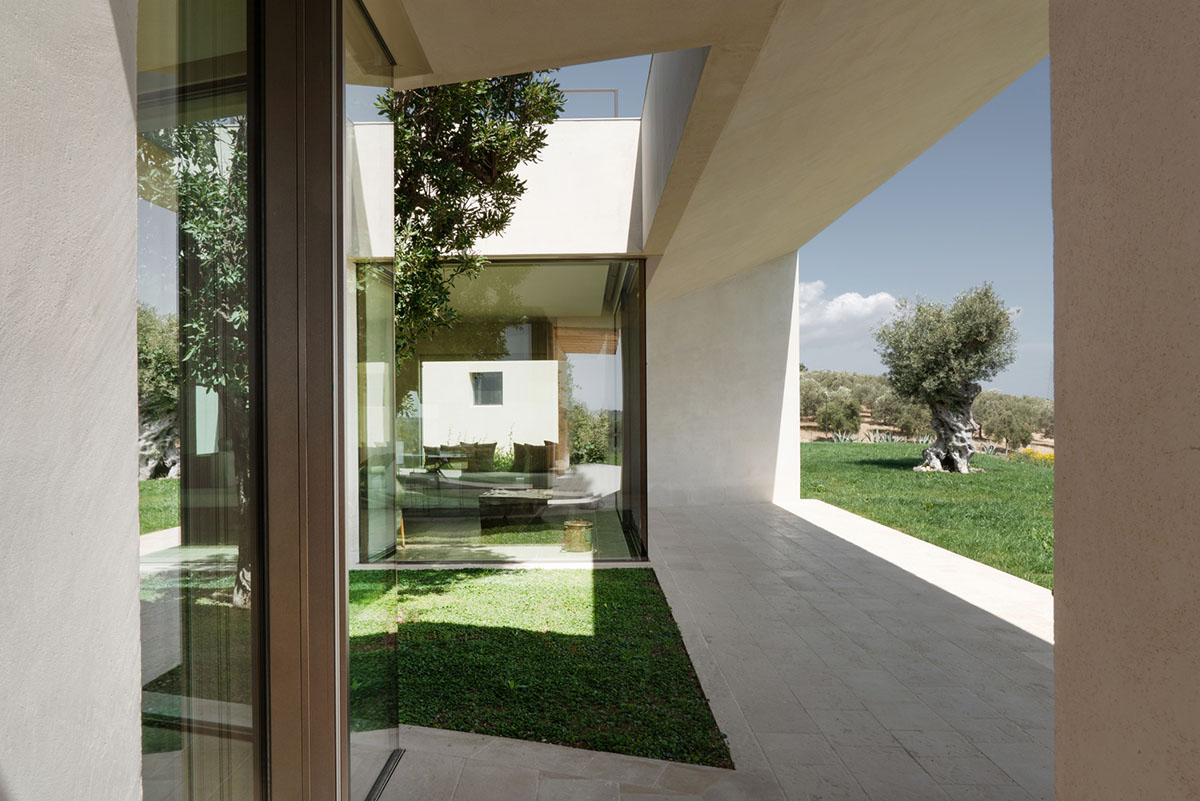 The architects aimed to create a clear relationship for this single-family villa that very much connects its vocation to being a continuous experience between inside and out.

The house is built with three blocks rotated one towards the other and linked by one long lowered corridor that hosts the kitchen, the stair well, niches and built-in wardrobes. 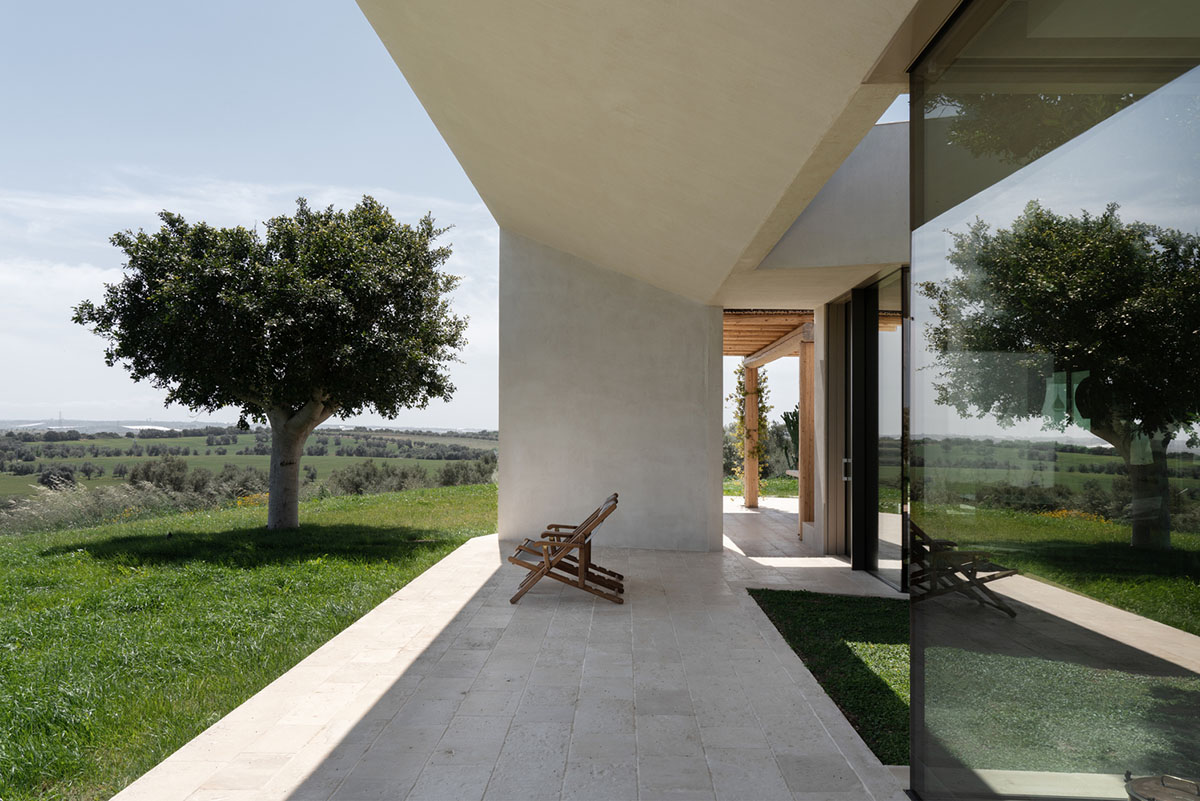 According to the studio, this corridor is divided into “ramifications” and it is no coincidence that a tree is incorporated in the spaces of the house.

The day area and the night area are considered as separate areas, but in constant relation with the outside through the great windows, which have been studied in great detail so as to contain technology and energy efficiency packages. To complement the visual coherence, the studio also designed custom-made furnitures of the house - among them the tables, sofas and the wardrobes, their textures reminding typical materials from the surrounding countryside.

The studio designed the western façade more introverted, the openings are similar to embrasures, like the main entrance that evokes the narrow openings in the boundary walls of bagli. 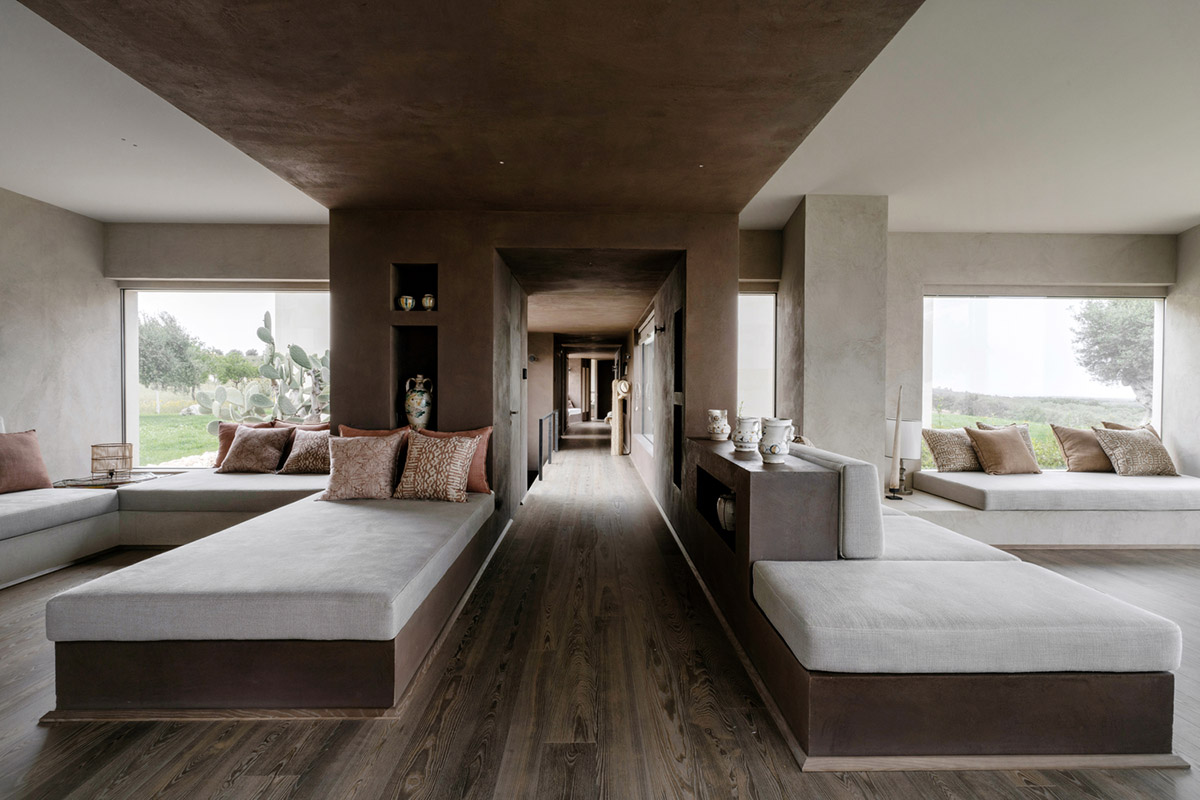 The coverings system has been studied to work as an rabbet of pitches, that are partially walkable and accessible through a flight of stairs, which becomes the protagonist of a whole wall in the day area; a pool, garage and an entire floor dedicated to utility rooms complete the villa. 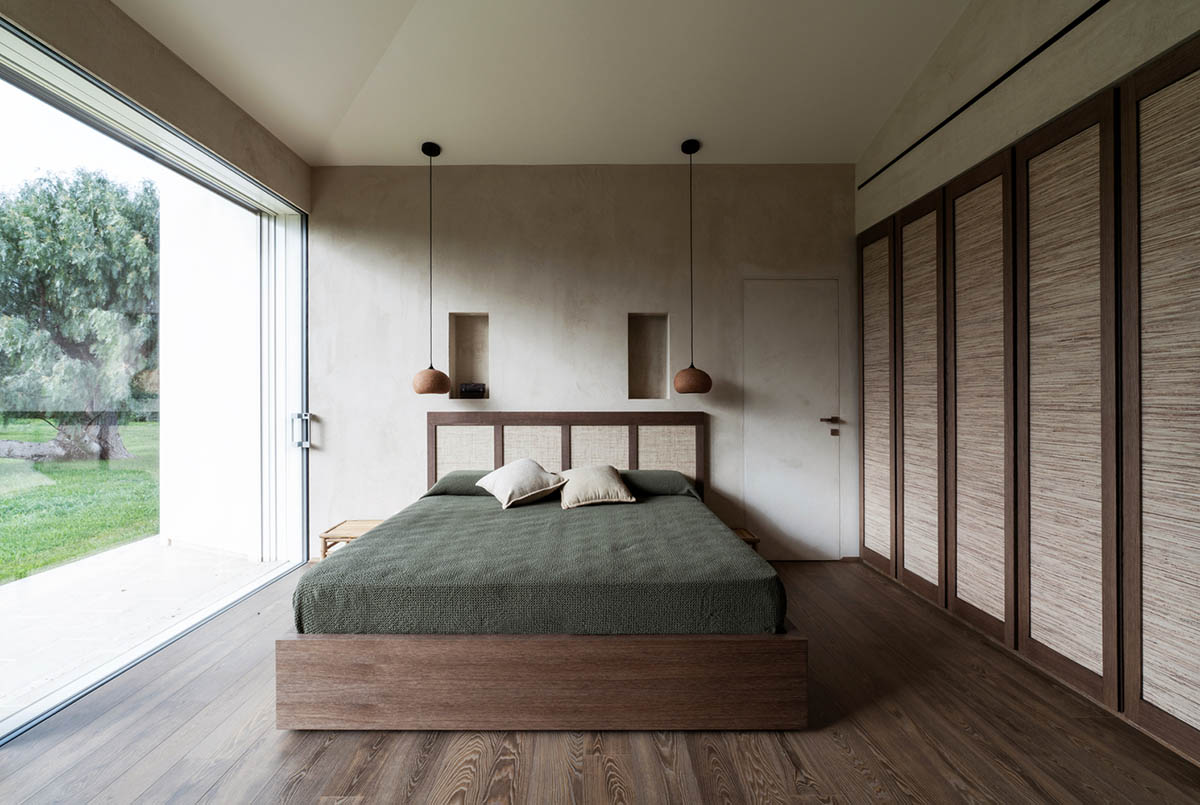 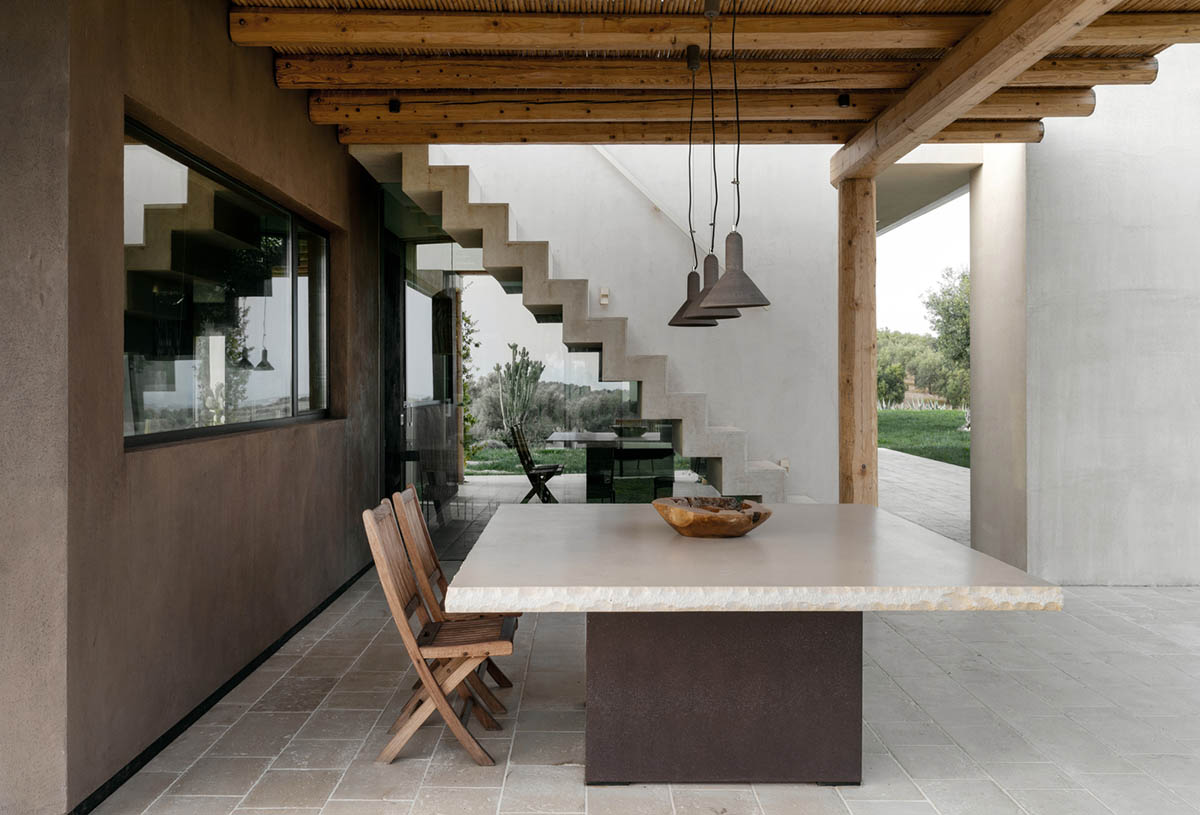 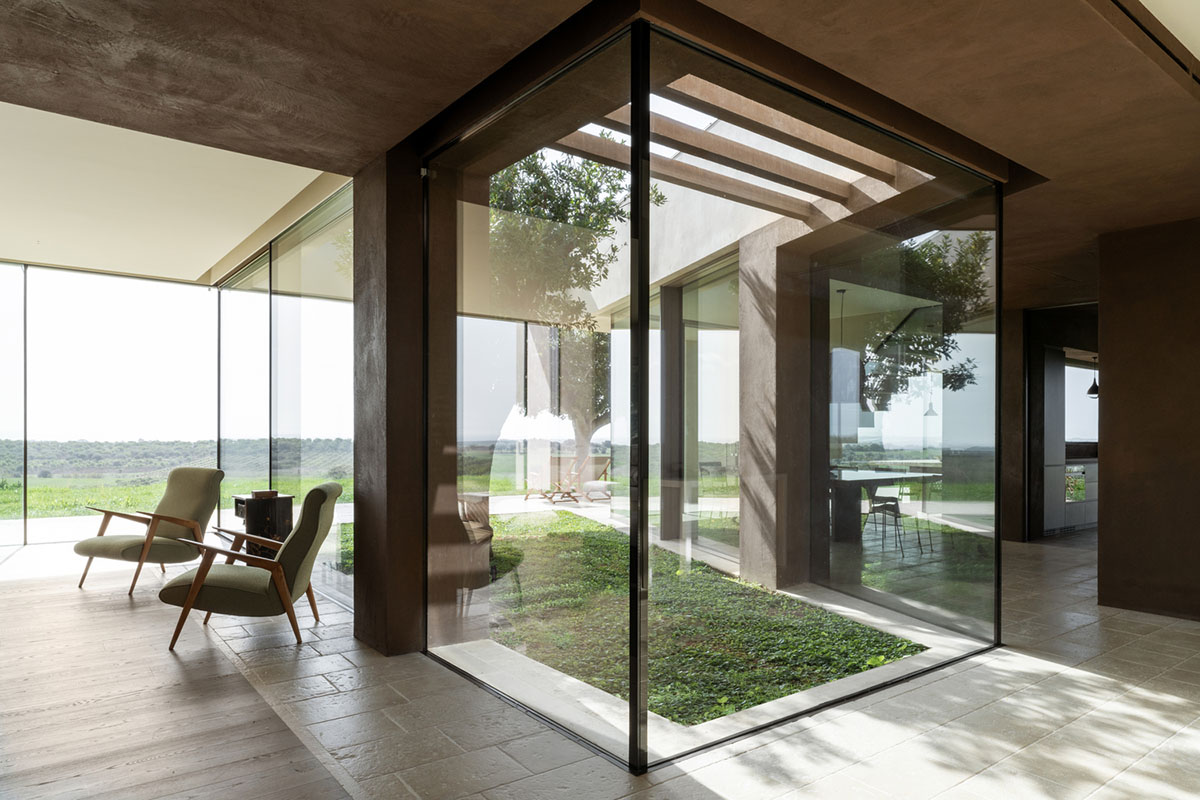 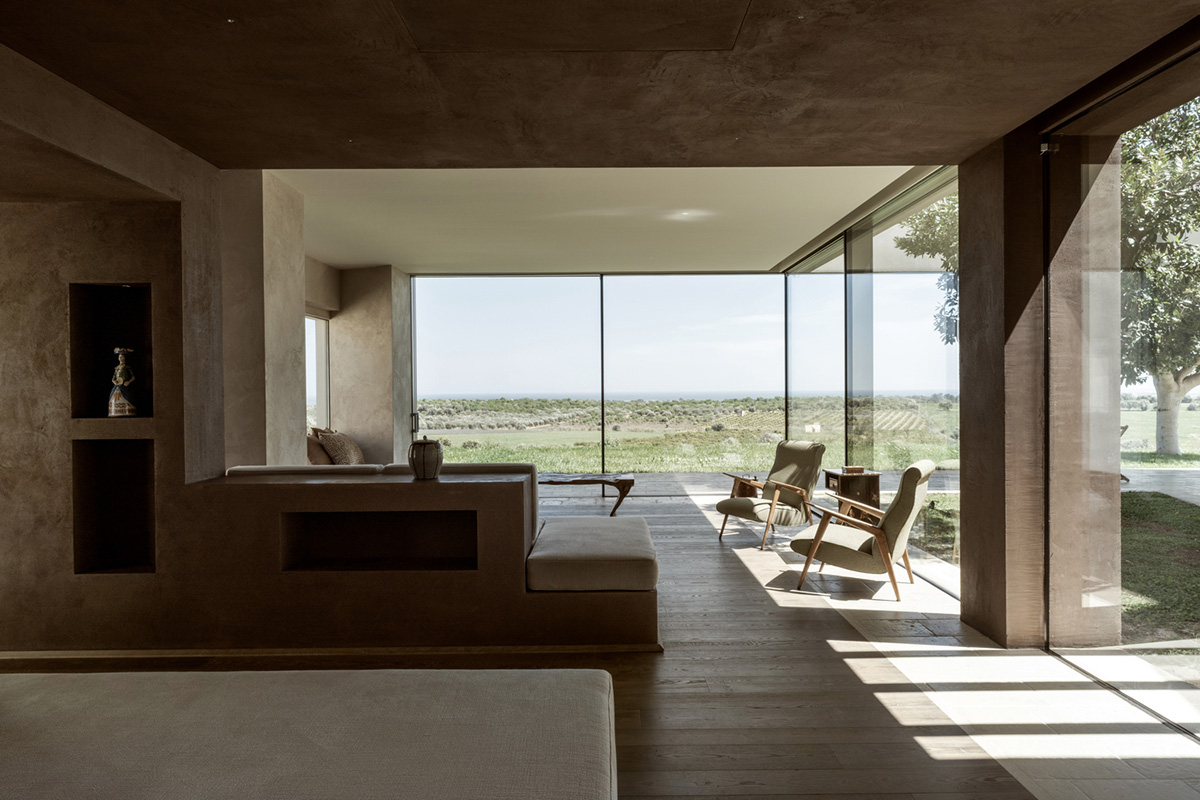 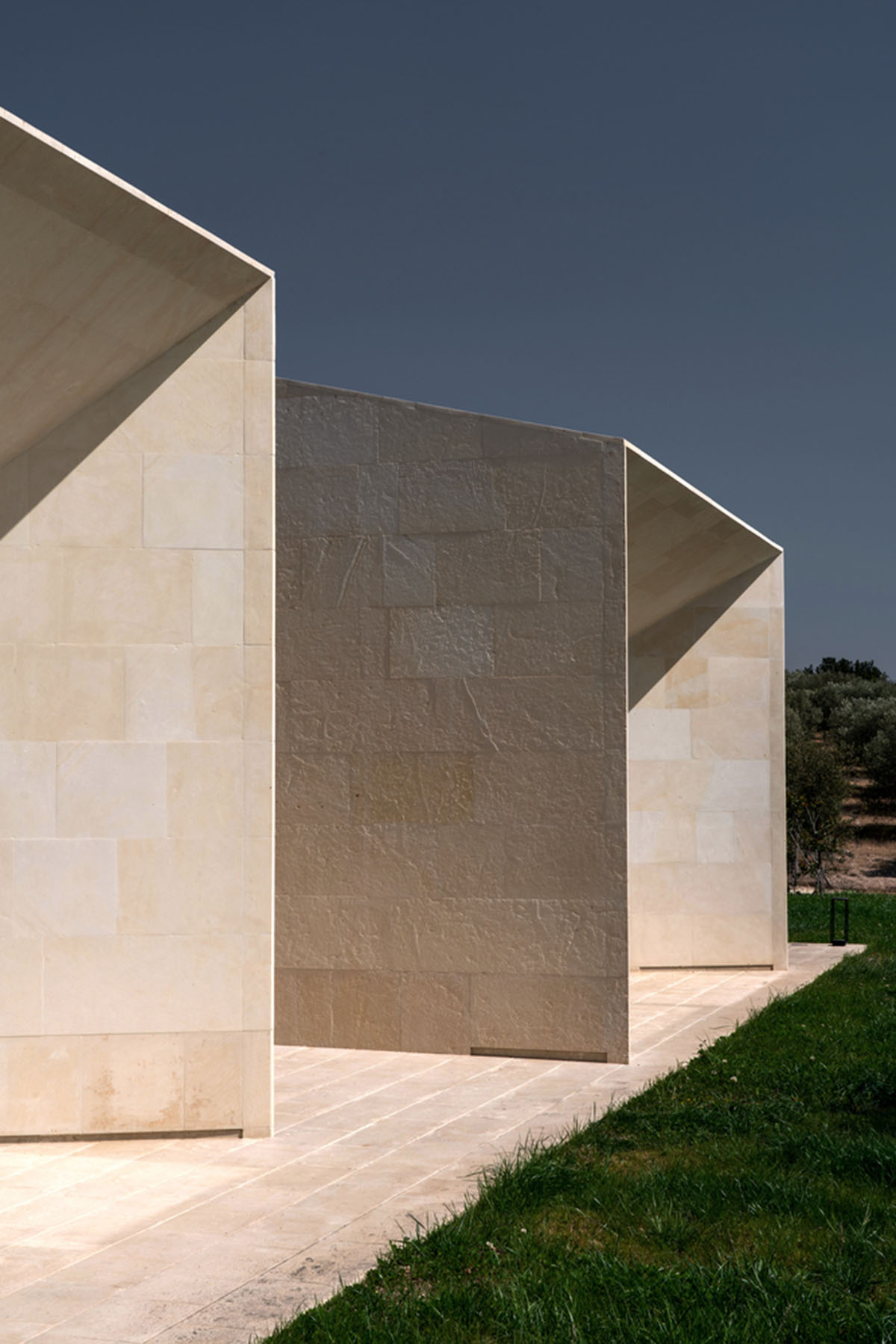 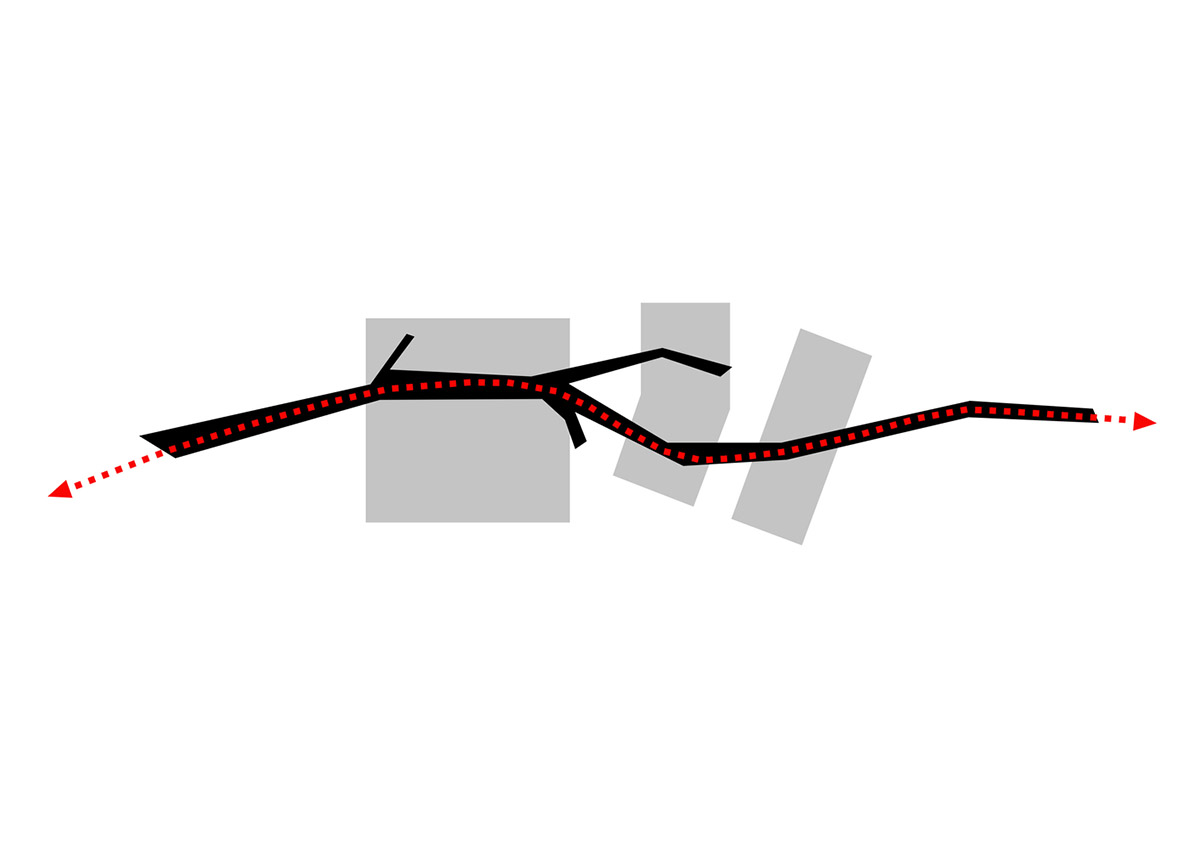 Westway Architects was founded in 2005 in Rome, the practice is led by Luca Aureggi, Maurizio Condoluci, Laura Franceschini. The firm's project portfolio includes brand new structures in commercial, cultural and residential projects, on different scale, in Italy and abroad.