In The Memory of Zaha Hadid: The Dongdaemun Design Plaza 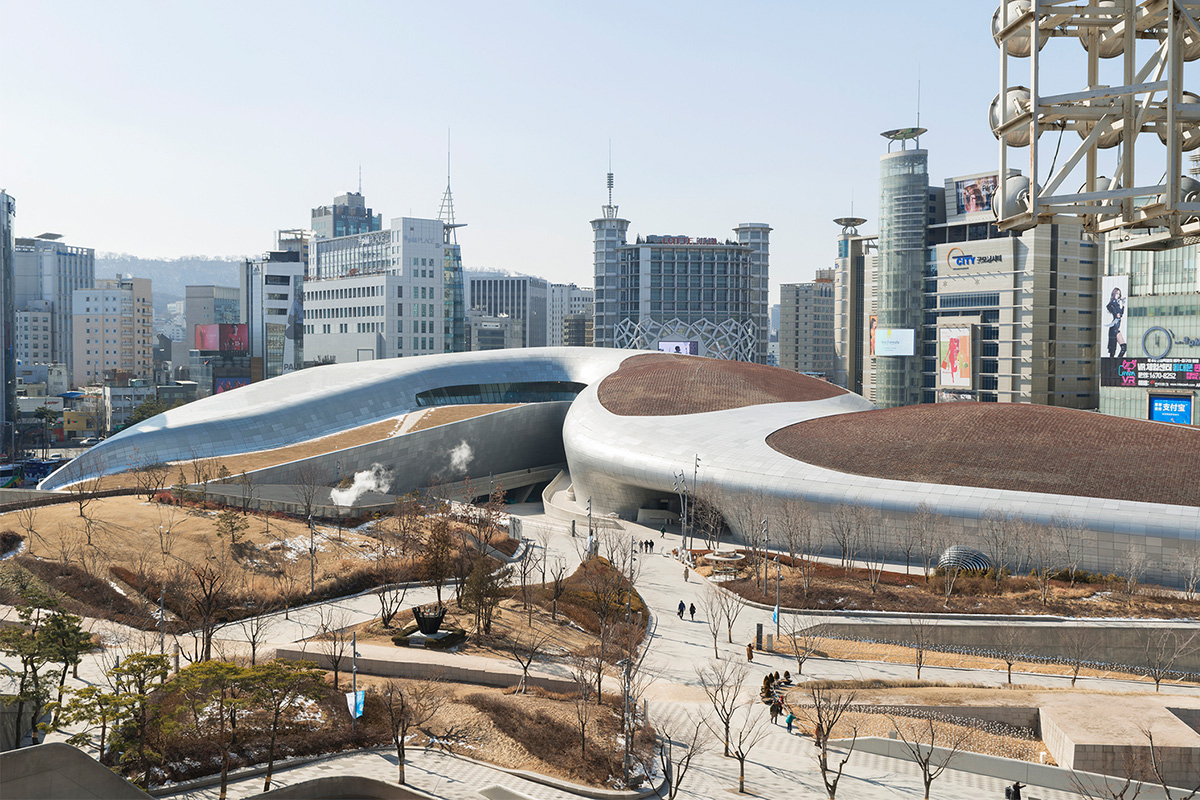 The Iconic Chaos Within Seoul

"A Complexity must be constant in architecture, it must correspond in form and function. Complexity of program alone breeds a formalism of false simplicity; complexity of expression alone tends toward formalism of multiplicity - an over-simplification rather than a simplicity on the one hand - a mere picturesqueness rather than complexity on the other. We no longer argue the primacy of form or function; we cannot ignore their interdependence, however." Robert Venturi (1965), Complexity and Contradiction in Architecture: Selections From a Forthcoming Book.

It is one of the most difficult tasks of contemporary architecture; to find the relation between the past, present, and translate it into a welcoming design. Negotiating the history of the area, its geography, environment, the cultural and collective memory of the site along with the local urban fabric.

The Dongdaemun Design Plaza (DDP) was designed by Zaha Hadid Architects and completed in 2014. Just as most of her designs this is a controversial building and today is considered one of the contemporary icons of Seoul, South Korea.

The concept of DDP lies within its relation to the Han river that passes through Seoul. The architects using a satellite observed the flow of the water and using the technology of fluid simulation created a frozen-like-wave structure. The green roof concept was applied to the structure, emphasizing the image of greenery running along a river. Previously the area was hosting the Dongdaemun baseball stadium which was the only stadium allowing amateur players to conduct games. During a press conference, the architect (Schumacher) (which can be visited on this link: https://www.korea.net/NewsFocus/People/view?articleId=118120) stated that the structure resembles or takes the form of an arena (creating a connection with the past). Interestingly, during the excavation, an enormous archeological site was found. So even though the memories on the surface were swept away, even older history emerged from beneath. As a result, an archeological park was designed that welcomed the historical Korean traditional garden, guarded by the preserved floodlights of the stadium (which can be visited on this link: https://www.korea.net/NewsFocus/People/view?articleId=118120). 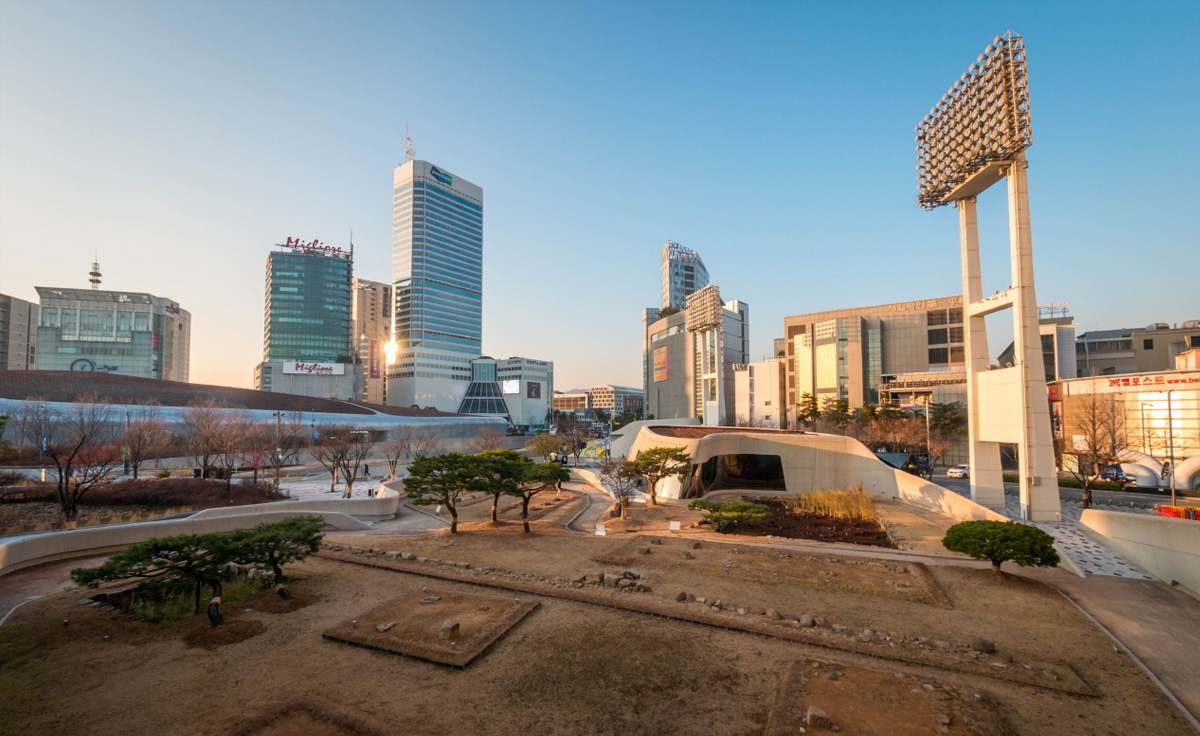 “Complexity must be the result of the program at least rather than the will of the author.” Robert Venturi (1965), Complexity and Contradiction in Architecture: Selections From a Forthcoming Book.

The Reflection of The River "In the details are the possibilities of innovation and invention, and it is through these that architects can give harmony to the most uncommon and difficult or disorderly environment generated by a culture." Macro Frascari (1984) Tell-The-Tale Detail.

The DDP is the first and biggest atypical project that has been created using a 3D modeling technique. The exterior façade of the DDP is made up of over 45,000 aluminum panels including 14,000 flat panels and 31,000 curved panels, having a 4-mm thickness, all different in size and curvature. It holds a different perspective from whichever angle it is perceived from. During the night the panels are lit accordingly; to blend with the surrounding environment. It looks as if the project was extruded from different light combinations (street lights, car lights, commercials, and buildings) to make its own light. As if the project is a mirror, reflecting the nightlife of Seoul. 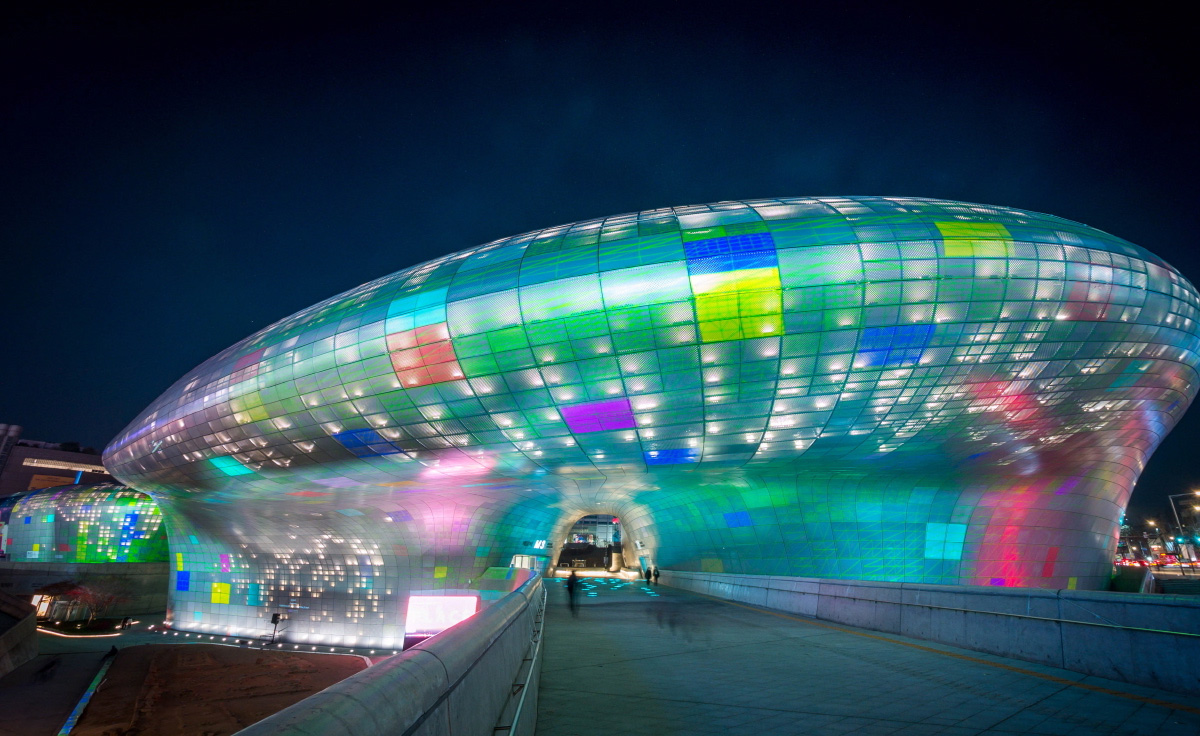 Almost all the walls of the interior spaces are painted white interconnecting with the white roof, one might almost call it impossible to draw a line between the ending of a wall and the beginning of the ceiling due to the constant motion and shift in the mass of the interior. Since the walls have no edges but rather a never-ending surface of curvature, this gives an impression of frozen waves. A little amount of columns can be spotted since most of the curved walls are load-bearing.

One of the significant elements that decorate the interior would be the staircase that stands like an elegant monumental piece of art, centering the cultural hub. The staircase seems like it was spiral-shaped at one point but melted down and froze (just like the walls) into the form that it presents now. The only different textures that can be noted are the wooden steps of the stairs or the metal thin bar of the railing. The flooring of the rooms is also white, occasional parquet flooring can be seen and some rooms are having black marble tiles shaped in circular and irregular forms that are decorating the white floor. Another texture that can be noted in the interior is the exposed concrete. 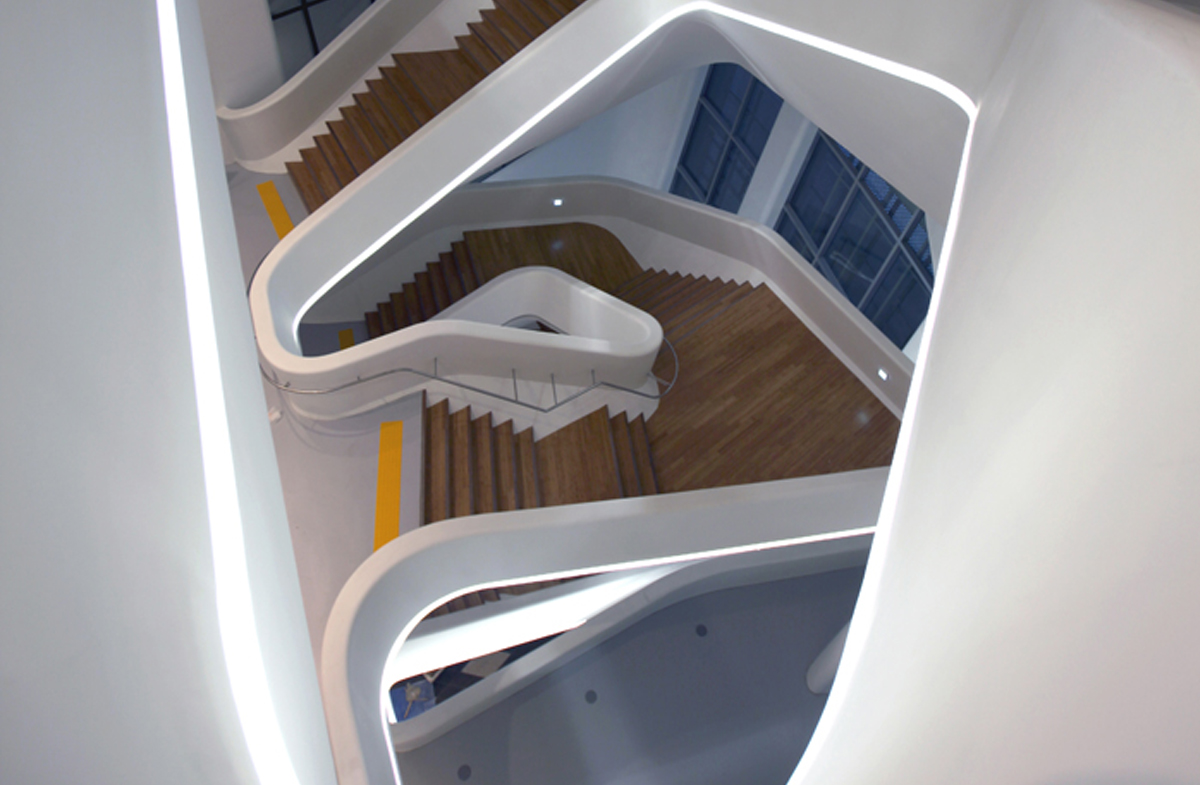 Spaces that hold within functions such as administrative offices have installed or built-in furniture; the flow of the curve from the ceiling falls into a horizontal platform that makes the tables. Some walls are even sculptured or carved out into seating elements along the halls of the exhibition spaces. 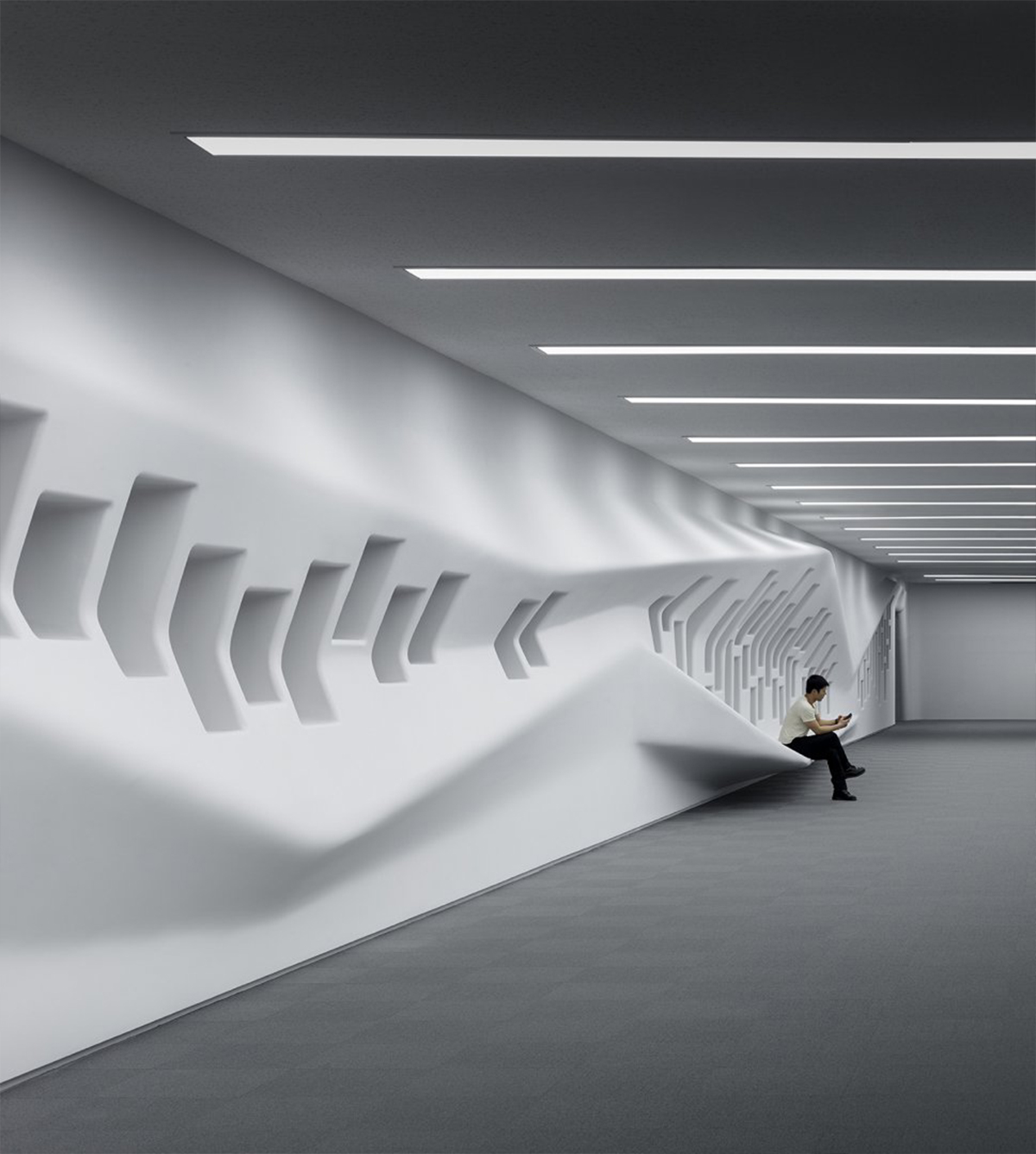 The lighting system is also designed along with the ceiling to avoid any disruption in the illusion of the frozen-like waves; the light seems to follow the path of the ceiling.

The endless notion of a smooth cave of white walls gives the impression as if a white canvas is prepared for the works that will be exhibited. The melted staircase and the ceiling of frozen waves. Entering every space, or moving in-between the spaces is like stepping into one of Dali’s surreal paintings.

An Attempt To Familiarise The Alien 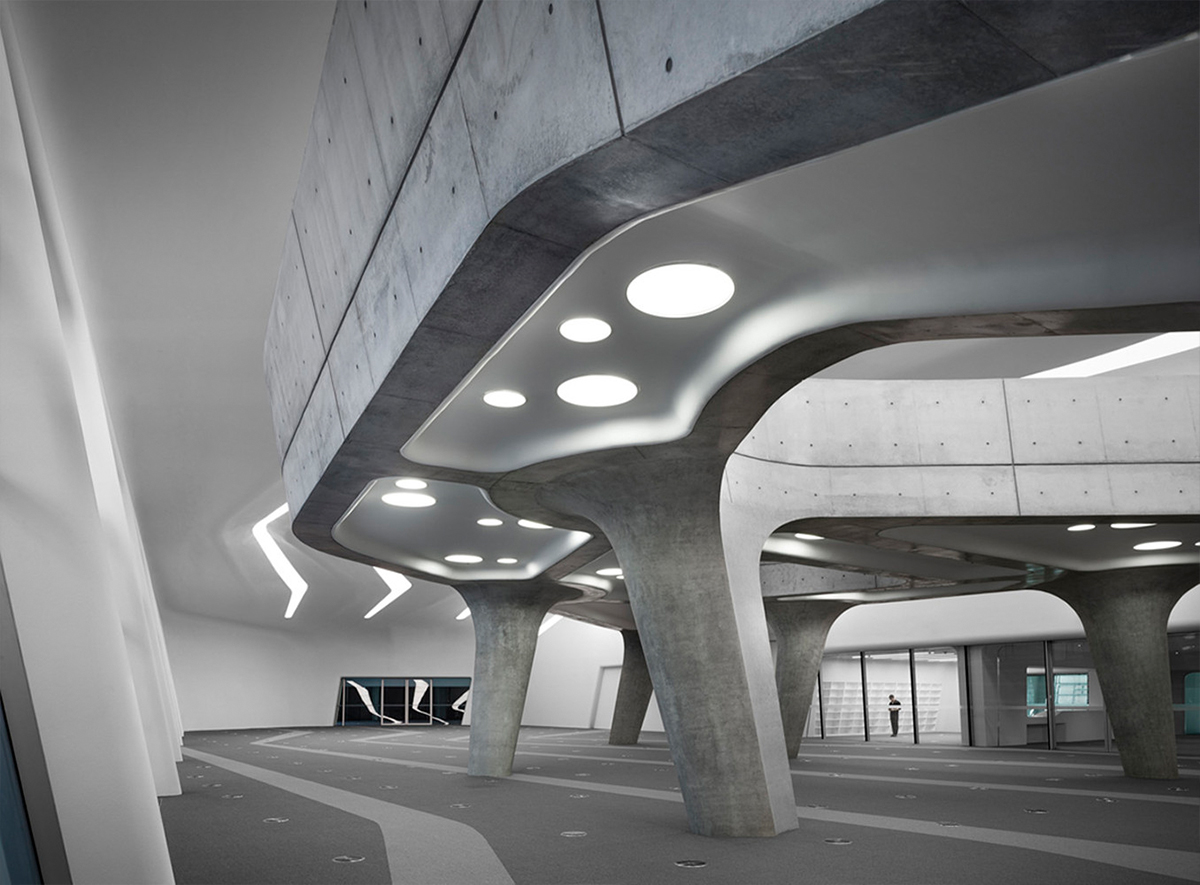 “Architecture is supposed to become an experience of failure and crisis." Macro Frascari (1984) Tell-The-Tale Detail.

When a contemporary design is being introduced it usually clashes with the cultural, local, and traditional architecture that it is trying to fuse with.

Before the construction was completed the press was already making a negative statement about the structure, calling it "the alien spaceship that landed in Seoul" clearly stating their unsatisfied opinion over the project.

Interestingly, with time passing, the people grew accustomed to this chaotic and bizarre building.

The DDP stands today as the pride of the capital and the focal point of the arts. It hosts art exhibitions, fashion shows, forums, international and local events. It is a tourist landmark for all.

One may argue at the end, that progress and innovation require one to stand out and be unfamiliar, and in this case, it became the DDP, the alien spaceship that landed on the Han river…

"Whence the paradox: on the one hand, it has to root itself in the soil of its past, forge a national spirit, and unfurl this spiritual and cultural revindication before the colonialist’s personality. In order to part take in modern civilization, it is necessary at the same time to part take in scientific, technical, and political rationality, something which very often requires the pure and simple abandon of whole cultural past. It is a fact: every culture cannot sustain and absorb the shock of modern civilization. There is the paradox: how to become modern and to return to sources; how to revive and, dormant civilization and take part in universal civilization…." Kenneth Frampton - Prospects for a Critical Regionalism (1983).