Cologne-based architecture practice RSAA has designed a church made of uniform layered slices to allow soft light inside.

Named The Chamber Church, the building is illuminated with equally-distributed light thanks to its layered, all-white slices in Qingdao, China.

The 771-square-metre church features a bell tower with spire and rose window in front of the façade, creating a sculpted appearance for the church.

Aiming to create a spatial container that both respects the past and looks towards the future, the church provides a religious experience and secular touch.

While the lower part is dedicated to an auditorium, it is divided into two parts: a semi-sunken space and a connected patio form a connection to the surrounding landscape. It is embedded in the mountain and connected to the square. 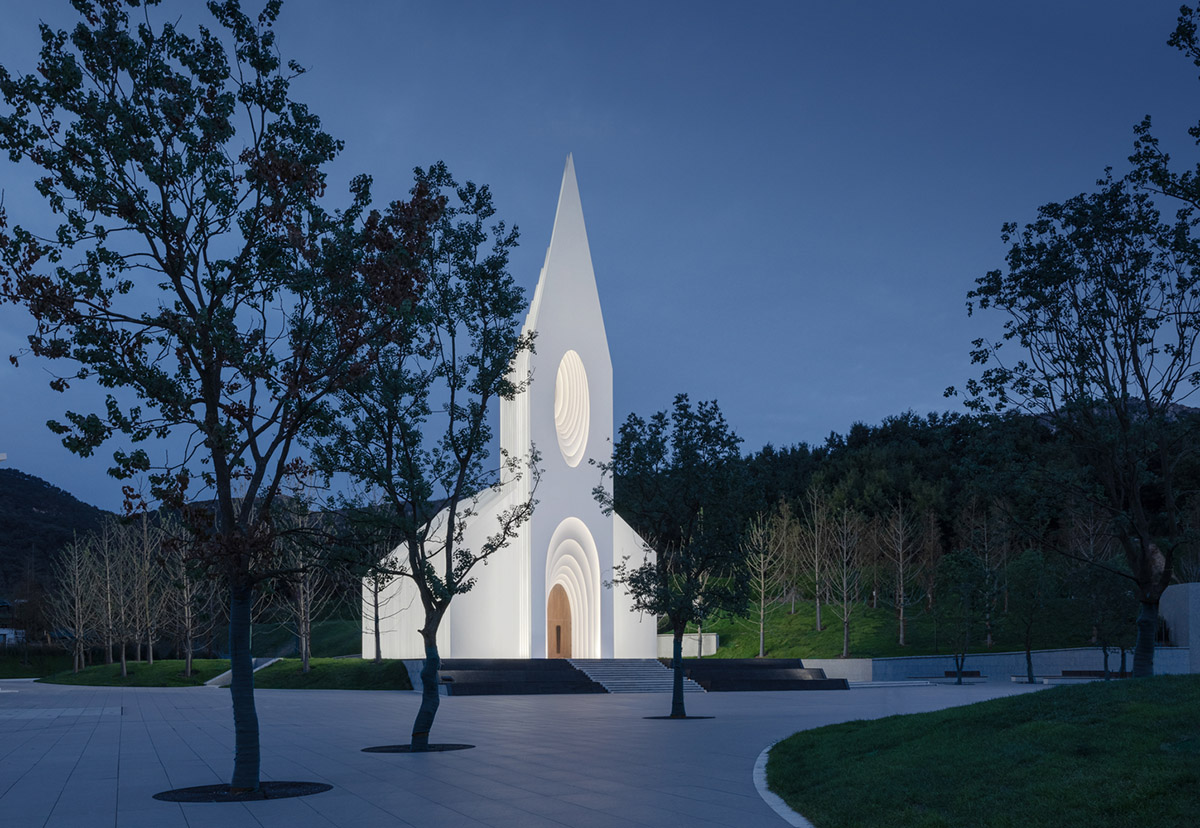 "It is the hidden foundation on which the upper part of the auditorium can stand proud between the mountain and the water, reflecting the power of heaven and earth and spreading the gospel of creation," said RSAA.

"Looking backwards we find the archetypes of architectural associations in history."

"The design echoes the memories associated with them, but interprets them in a timeless modernity creating a sense of the future. The architecture integrates this duality in plan and section," the firm added.

To create this modern icon, the architects wanted to create a pure shape, that’s still evokes the archetype of a church. Therefore, during the design process, the team integrated different vernacular façade images of traditional churchs.

They expressed the base volume through a series of all-white slices. RSSA added that "the created contour meets the expectation of client and visitors of the space's first visual impression."

"The sequential slices are introduced in a pure and modern way, whilst the gaps of the façade create various visual effects depending on the angle of the observer."

Although the church seems contemporary, the derived prototype still contains the classic components associated with a church, such as the bell tower with spire and rose window, the cascading interior arches, and the Basilica layout, but the team abstracted most of the decorative elements - not out of an aversion or rebellion against ornament, but in order to reveal both the interaction of archetype and experiment, and the core issue associated with it: divinity and ritual.

"Not only in sections and elevations, but also in plans, the building seeks to emulate its predecessors: the axial prolongation, the symmetrical layout, the stepped elevation, the progressive sectional rhythm, the implied basilica, these are all tributes to and an evolution from tradition," said RSAA.

"The topography changes its height at the front edge of the building, naturally dividing the surroundings into a plaza in front and a sloping landscape with a manmade lake behind the building."

Exterior features in the landscape include an artificial lake to create privacy, while the open space of the plaza emphasizes the relation to the public.

The design team closes the height difference between building and plaza with large water feature steps. According to the studio, they create a visual base to further strengthen the sense of ritual and sanctity of the main hall.

On the lower part, there is an auxiliary space for the main sanctuary, including the reception desk and preparation room.

The path towards the main entrance of the church leads past the southern side to the western portal. An alternative access exists on the north western part of the plaza, where a direct connection to the VIP facilities in the base exists.

As the studio explains, the rear view seeks to break the rigid impression of the building edge, and forms a fluid connection to the lake.

Although the program of the church is designed more introverted, it takes advantage of the series of landscapes slopes that block the view behind the calm lake the studio uses that as a passive space to look at from inside the hall.

In front of the church entrance, the architects create a "stage" to emphasize its central position.

"Before the advancement of construction technologies, caves were the first sheltered spaces for primitive humans, offering refuge from cold, wind, rain, sun and dangerous animals," explained the studio.

"Their encircling form is deeply embedded as a sign of security in humanities DNA. This sense of security was worshipped with the development of human civilization, which led to the early enshrinement of its origin, the cave, as a sacred place of ritual, such as the Caves of Lascaux (Grotte de Lascaux) or the Cave of Hilla (Jabal al- Nour)."

To achieve a sence of cave-like feeling, the team creates a cavernous space for the assembly hall thus attempts to give people a sense of peace and shelter in the form of an enclosure, just as the cave once did.

It again provides a frame for the ritual and sacredness desired by the people holding the ceremony, thereby triggering a connection between the real and spiritual dimensions. The interior space of the assembly hall is a soft, flowing cavity that creates an interesting detachment from the sharp geometric exterior contours. Its construction creates at the same time a cavernous space and a bright ambience.

The architects added that "During the design process more references for the cavernous space became apparent. It can also be seen as a series of creations in nature: in addition to the caves that have sheltered humans for hundreds of thousands of years, the blue holes in the oceans, the exploding supernovas, the mother's womb, all these series of existences have taken root in the depths of human consciousness, allowing us to further transcend form and speak to heaven and earth."

The design subtracted a series of gentle curves that scale with the spatial sequence to form an introverted cavity. Its primary layout continues the traditional Basilica form, while at the same time having a strong sense of fluidity. This softness contrasts with the hardness of the exterior to create a visual interaction between the interior and exterior.

The prototype of the cavity already exists in a number of projects. Setting this design apart from its predecessors is the balance between reality and fiction.

In comparison to the Bruder Klaus Kapelle, where the void exists before, and therefor determines the building, the volume and void are in this case are in an equal relationship. Due to its construction, the longitudinal section is added a grayscale, which increases the possibility of light and shadow intervention, while isolating from the traditional cavernous space with a continuous slice method.

The architects used the concept of light and slices as main design components. They sliced the entire church at uniform intervals along the longitudinal axis so that the created gaps can allow the light to enter.

As it passes between the white slices, it reflects back and forth between them and then spreads evenly and softly into the interior.

Throughout the day, the changing angle of the sun and its relation to the gaps and interfaces create varying visual effects. The play between direct and reflected light gives the "cave" a sense of divinity and elation.

"The intention behind the cave is to form a space of shelter and of spirituality," the studio added.

The architects explain their intention with Leonardo da Vinci's famous painting "Virgin of the Rock", where in a sheltered space of pure light, one can feel the love of creation for all beings.

"The remaining blades after the substraction of the inner and outer contours allow the building to be softly lit at night, and offering passers-by to feel the sacred light emanating from within," added the studio. "The form is constituted in a unique way: a series of aluminum (outside) and GRG (inside) slices arranged vertically, each 5 cm thick, with a gap of 40 cm between each slice. All these slices are combined to form the entire wall, roof and tower."

"The cascading white slices soften the interior light while wrapping the main frame and construction system of the building, giving the entire assembly a concise and austere atmosphere, which is both a contemporary aesthetic tendency and an echo of tradition - a fusion of heritage and contemporaneity."

According to the studio, structure is an underlying element is always implemented in the layout of architectural space. "From the dome and flying buttresses of traditional Western churches to the large gables and flying eaves of Chinese halls; the shaping of ritual space is always accompanied by the expression of the structure of the space. As a ceremonial space, we believe that the internal logic from form to construction should be simple and pure throughout the design of the Chamber Church."

The main space of the building, except for the bell tower, creates a structural form of a series of portal steel frames, which are positioned in correspondence with the white architectural slices.

These slices truly become the subject of the formal language and spatial structure of the main hall. At the same time, it also responds to the traditional church prototype from a structural point of view.

The connection between the series of portal steel frames is achieved by two levels of structural bars: the main beam runs through and ties all the steel frames together, while clearly outlining the longitudinal outer contours of the church. The secondary beams differ from the main beams in that they have been deliberately misaligned in the design.

On the other hand, the secondary beams become the backbone of the façade structure at the same time, achieving the integration of skin and structure. 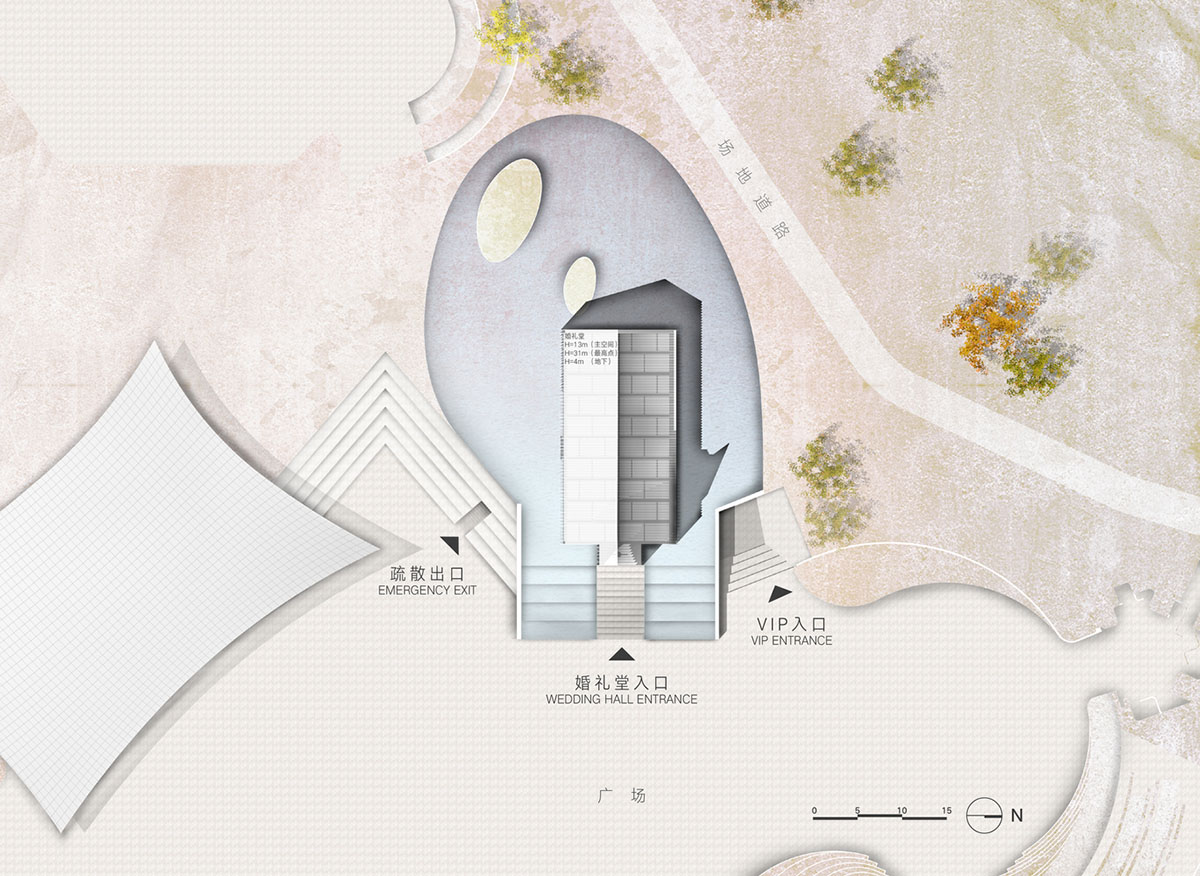 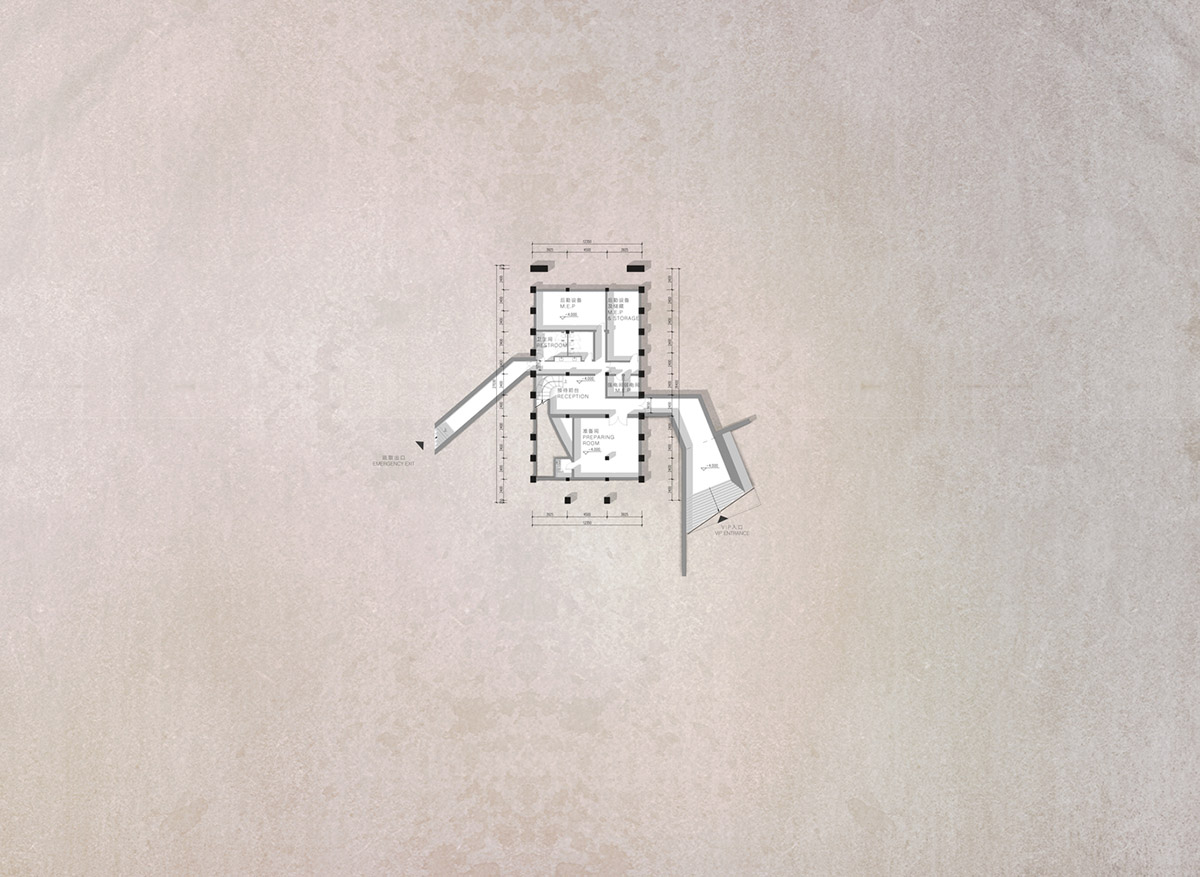 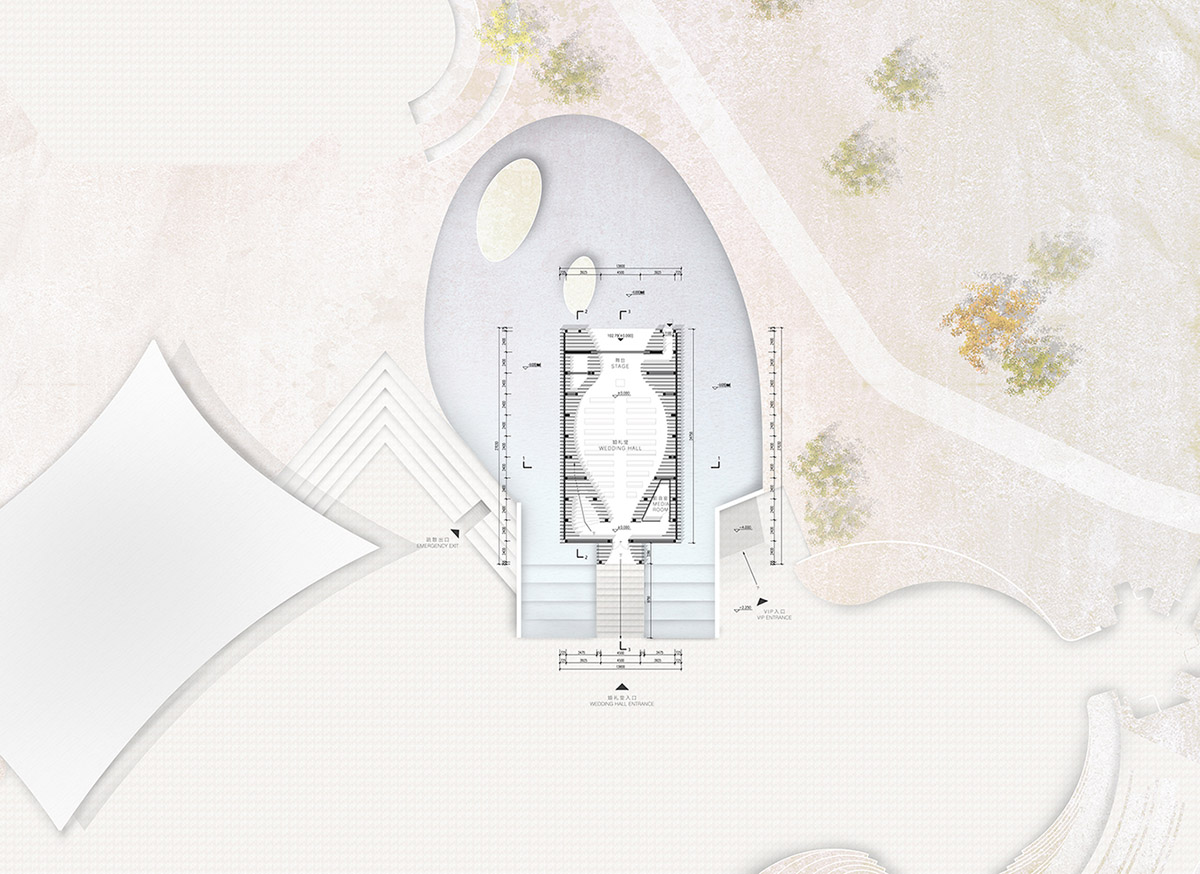 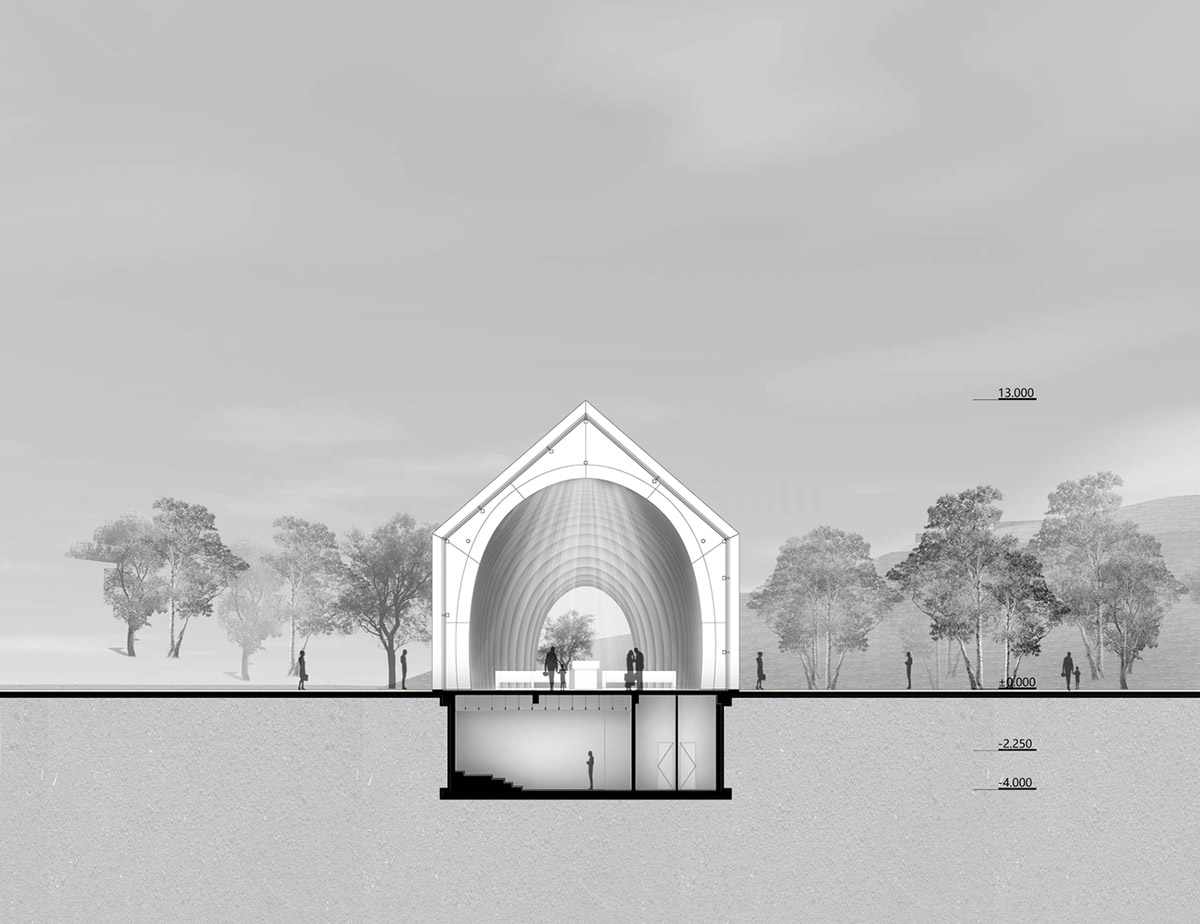 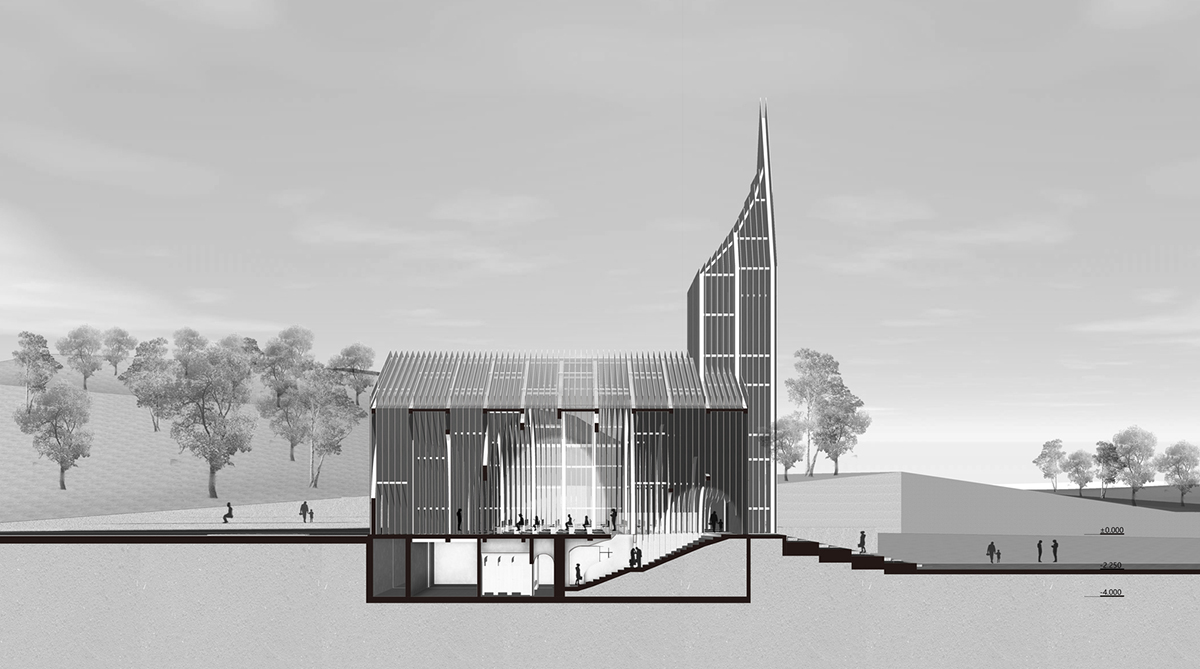 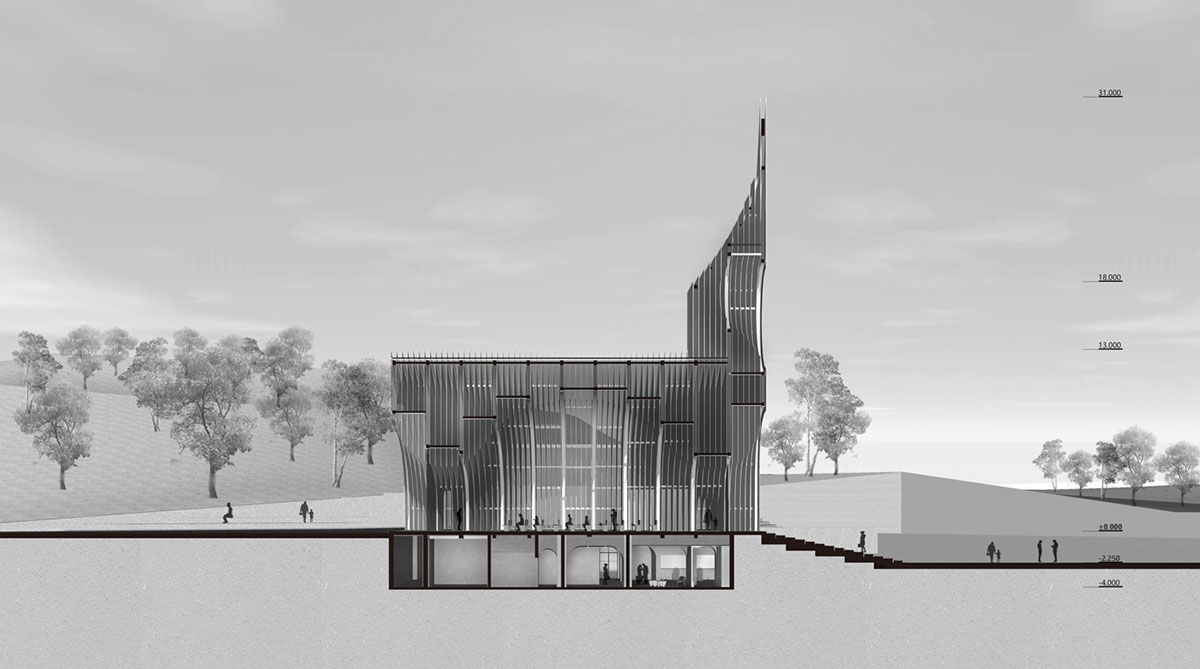 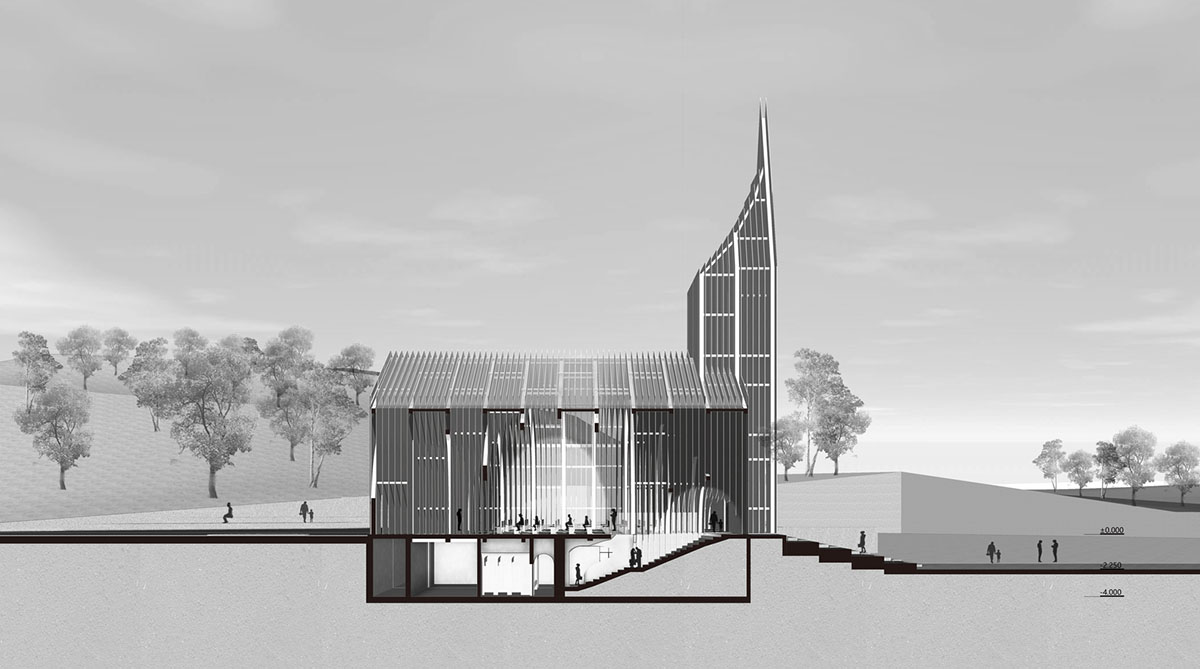 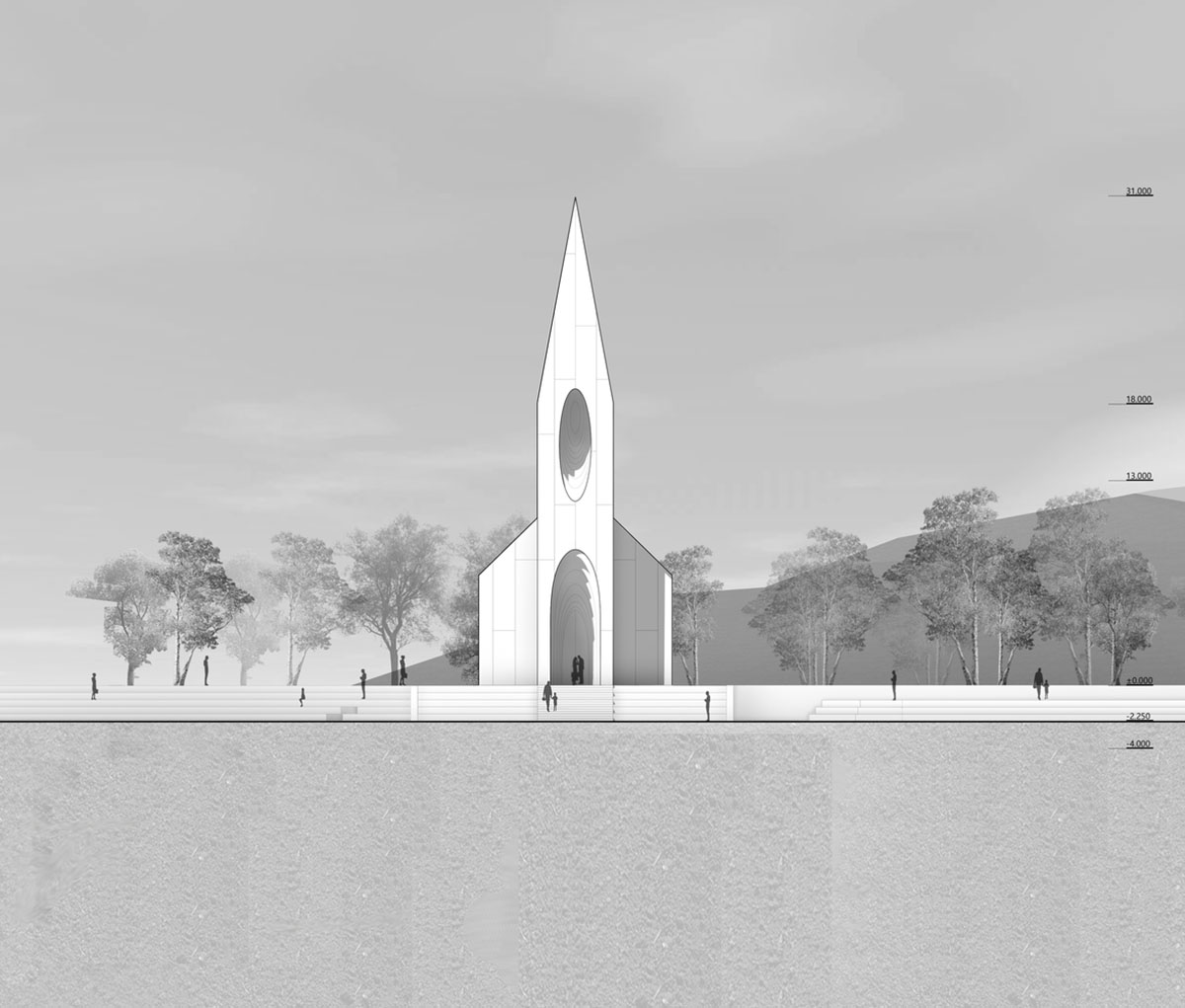 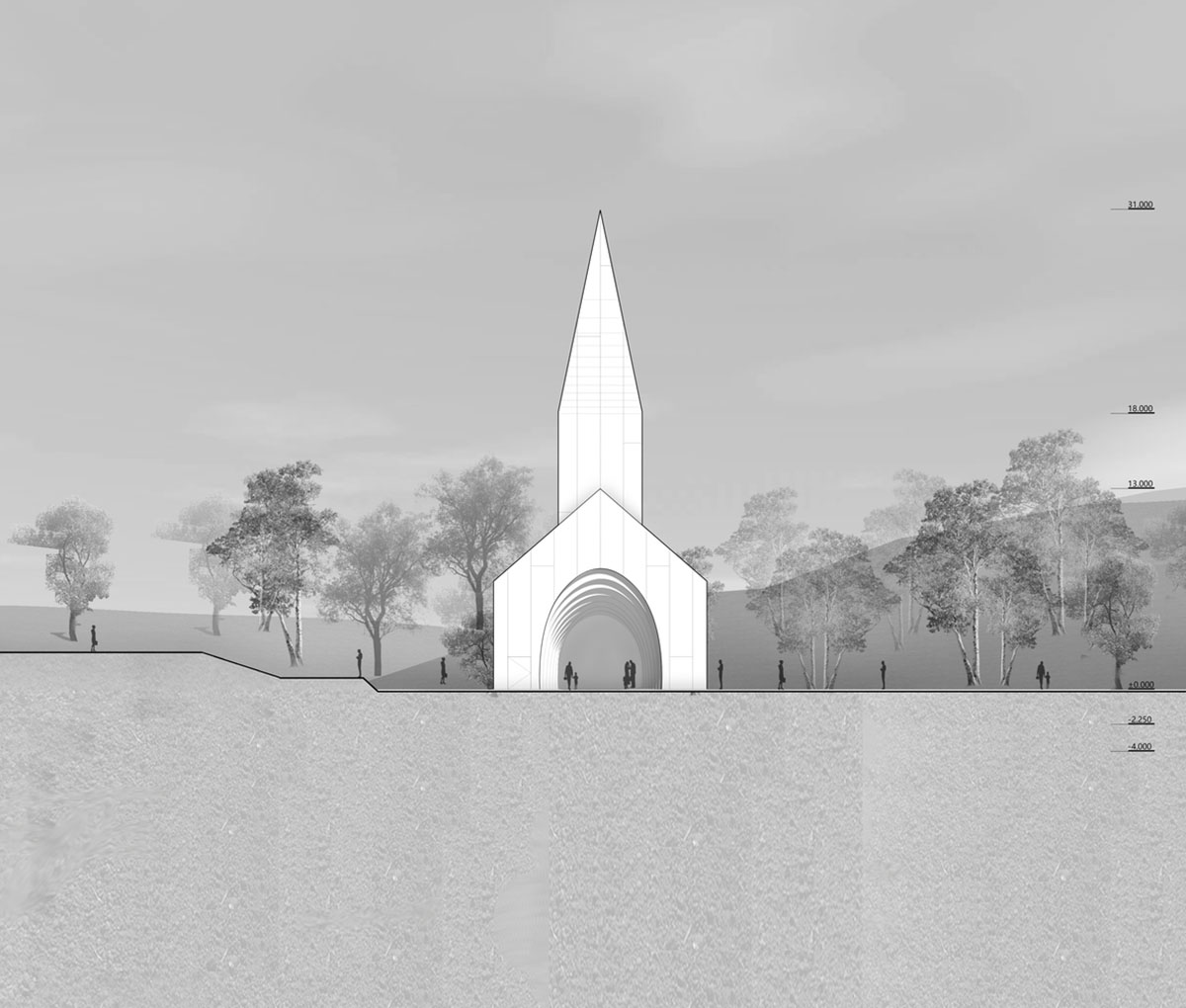 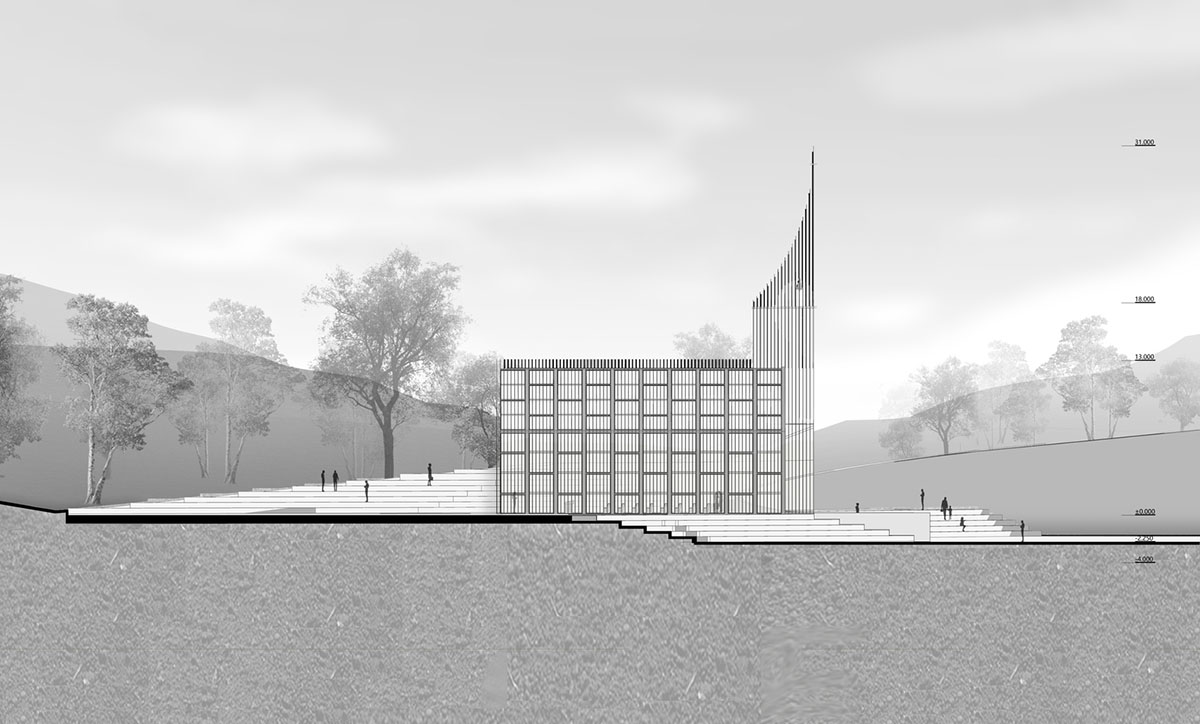 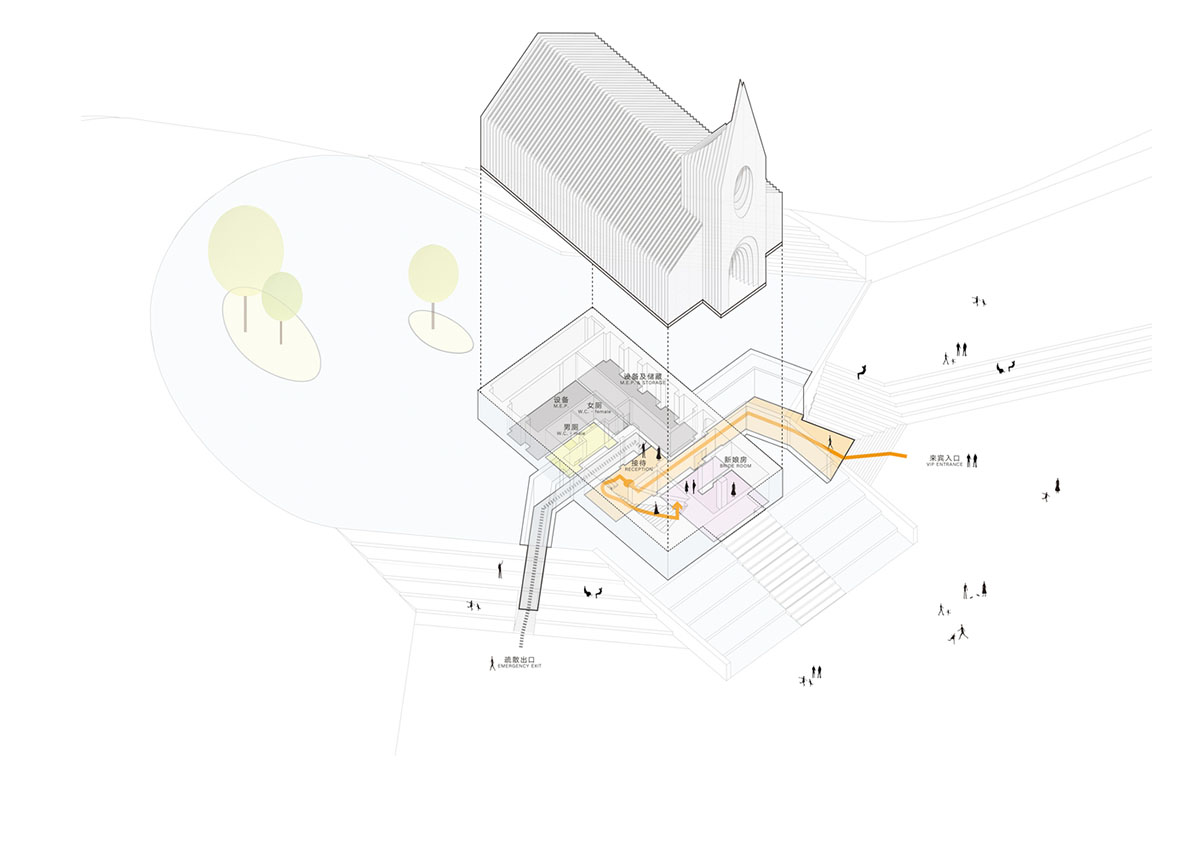 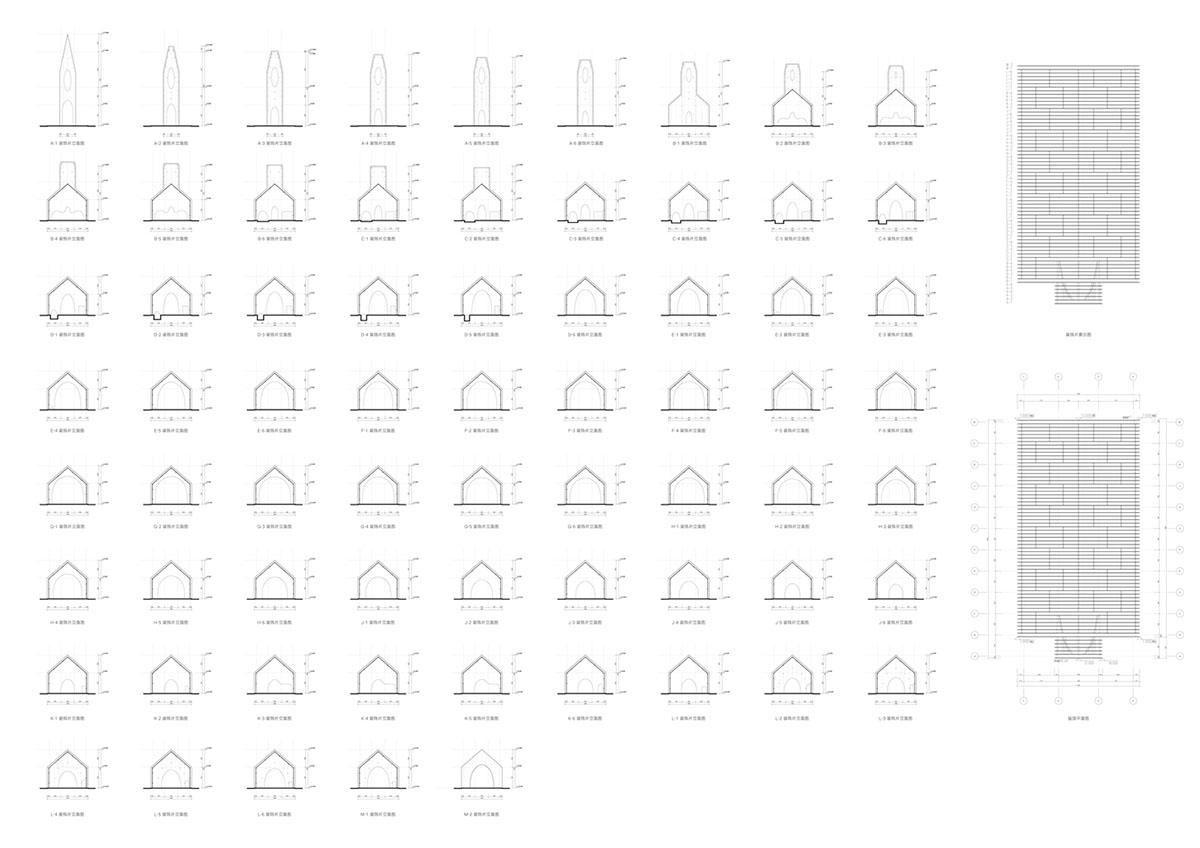 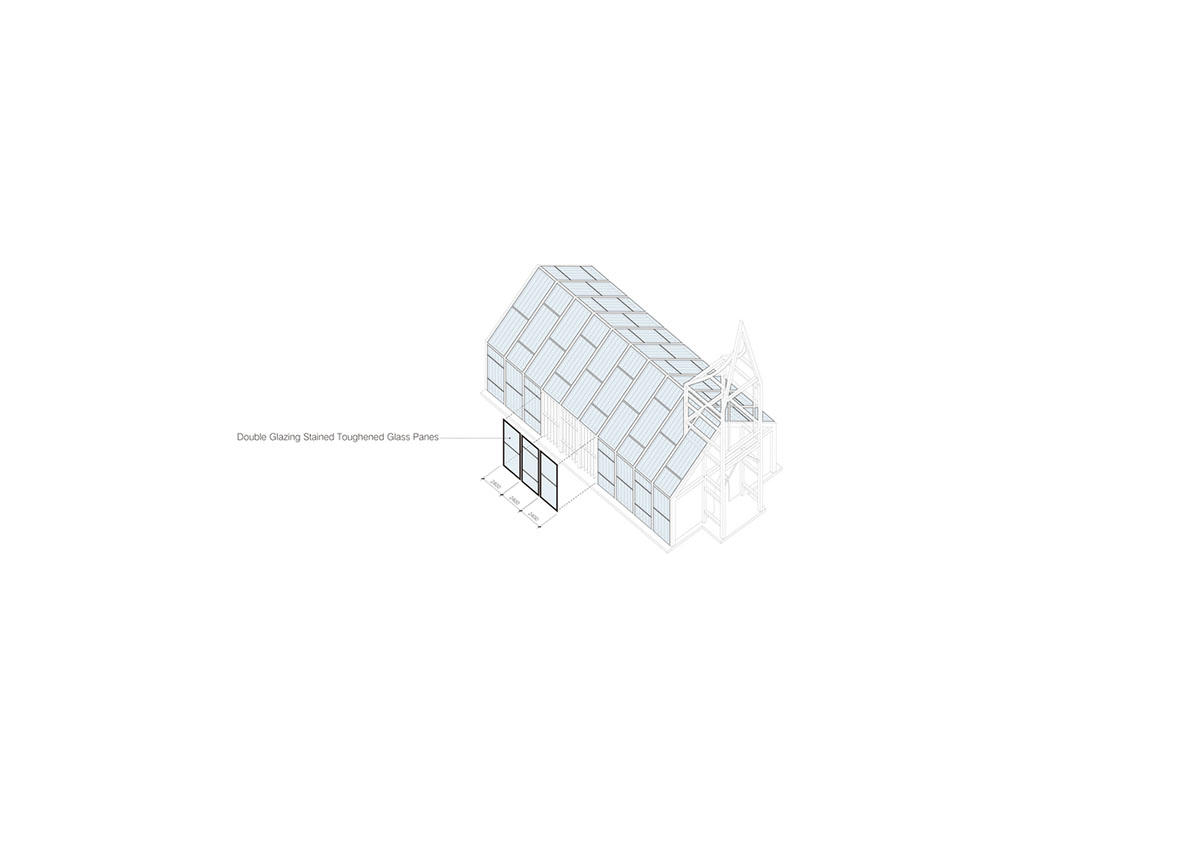 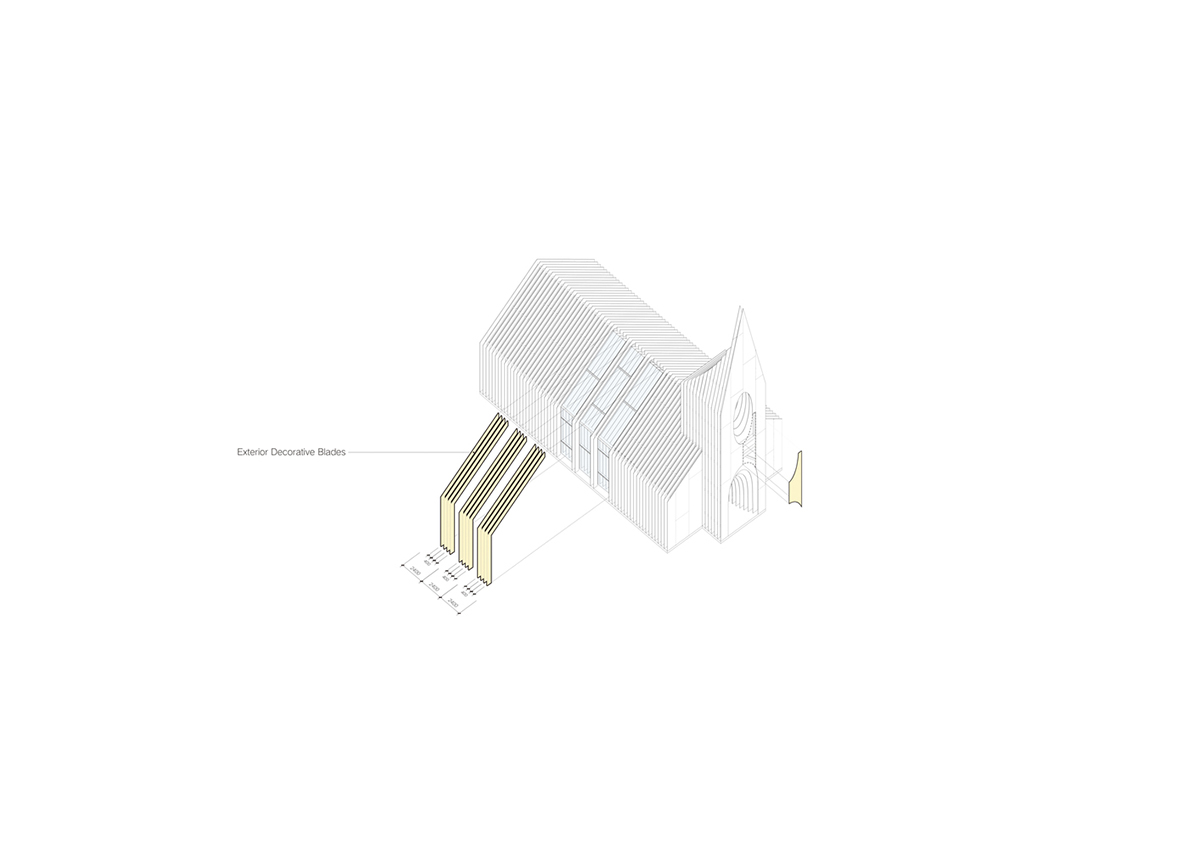 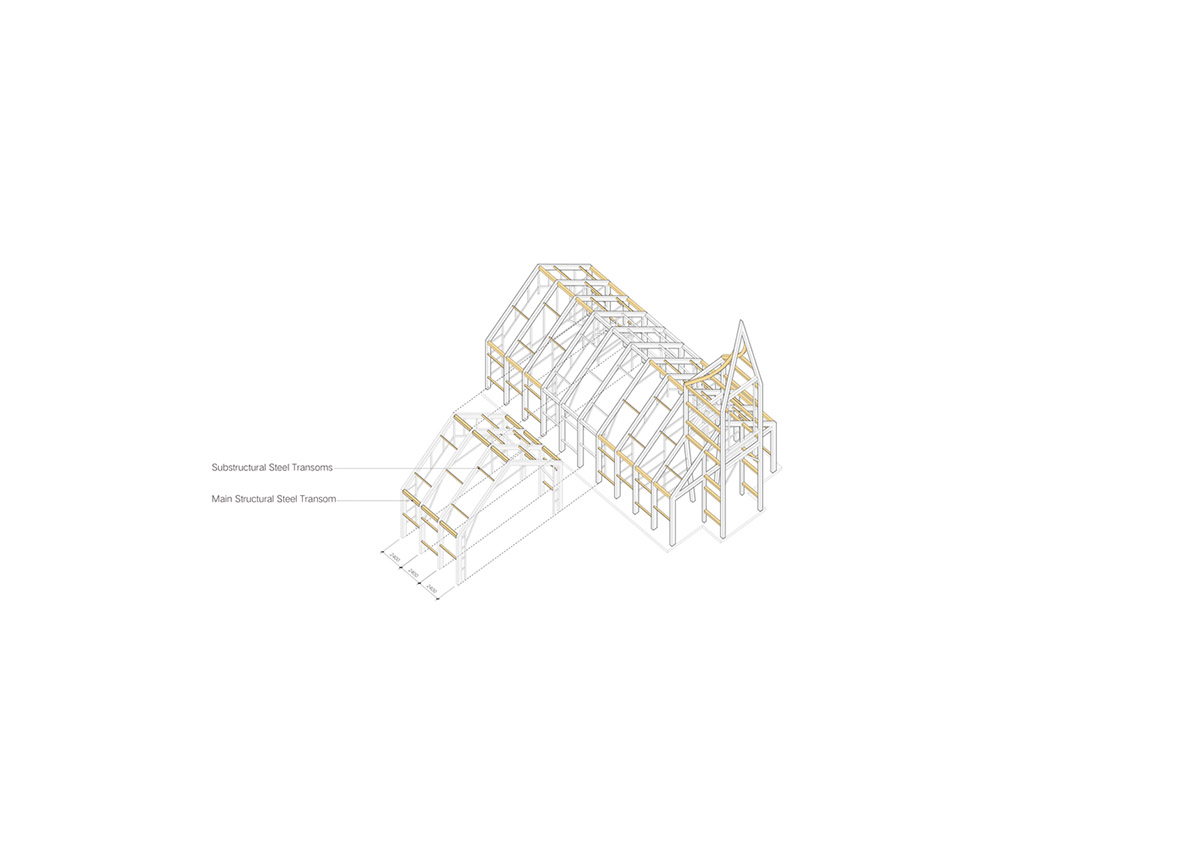 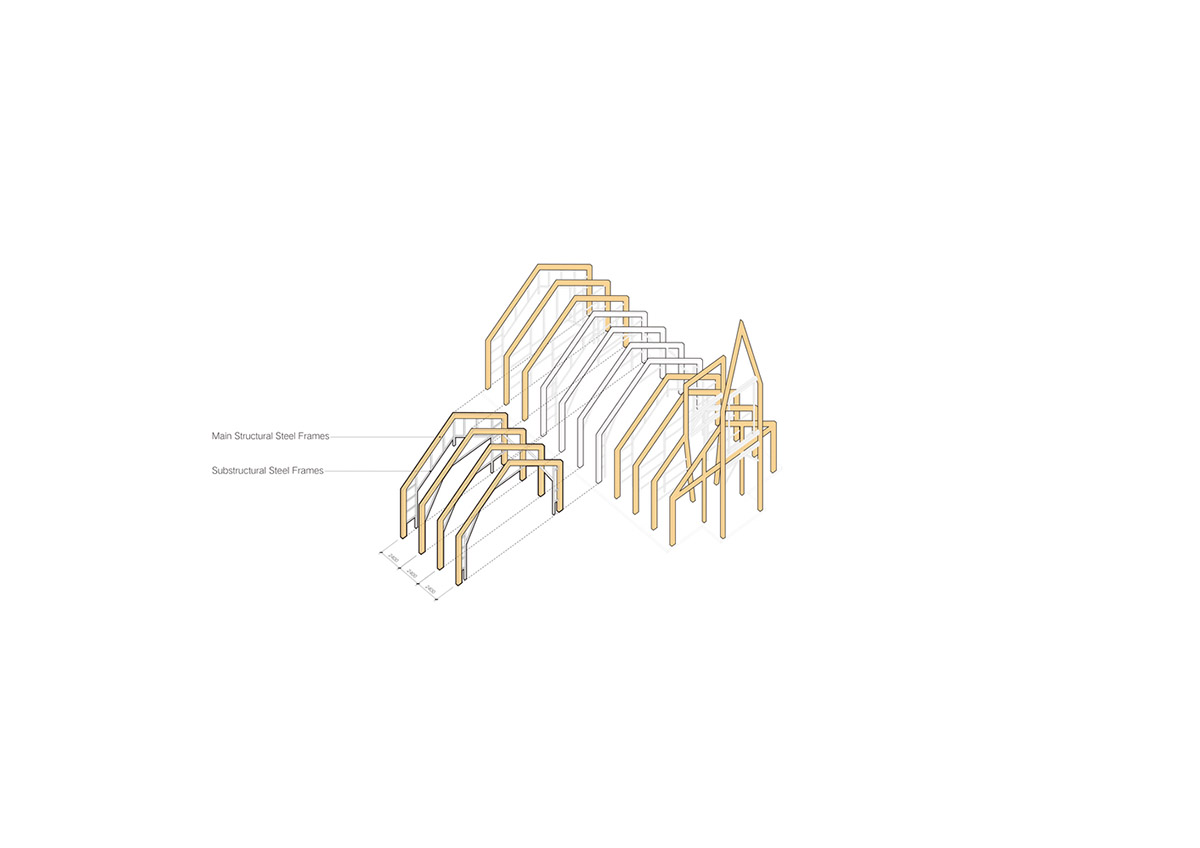