MVRDV designs self-sufficient valley in Armenia with a patchwork of 10,000 different gardens MVRDV has revealed its vision for a masterplan in Armenia, which will transform Armenian's 34,000-hectare Gagarin Valley into a more sustainable and ecologically diverse area.

Named Gagarin Valley, the new project will be an agricultural and eco-tourism masterplan, housing 35,000 residents - 11,000 current residents with 24,000 newcomers.

The Gagarin Valley masterplan comprises a patchwork of 10,000 different gardens, 12,000 future-proof new housing units, a market hall, a commercial centre, a centre for the arts, and a sunken stadium for 4,500 visitors. 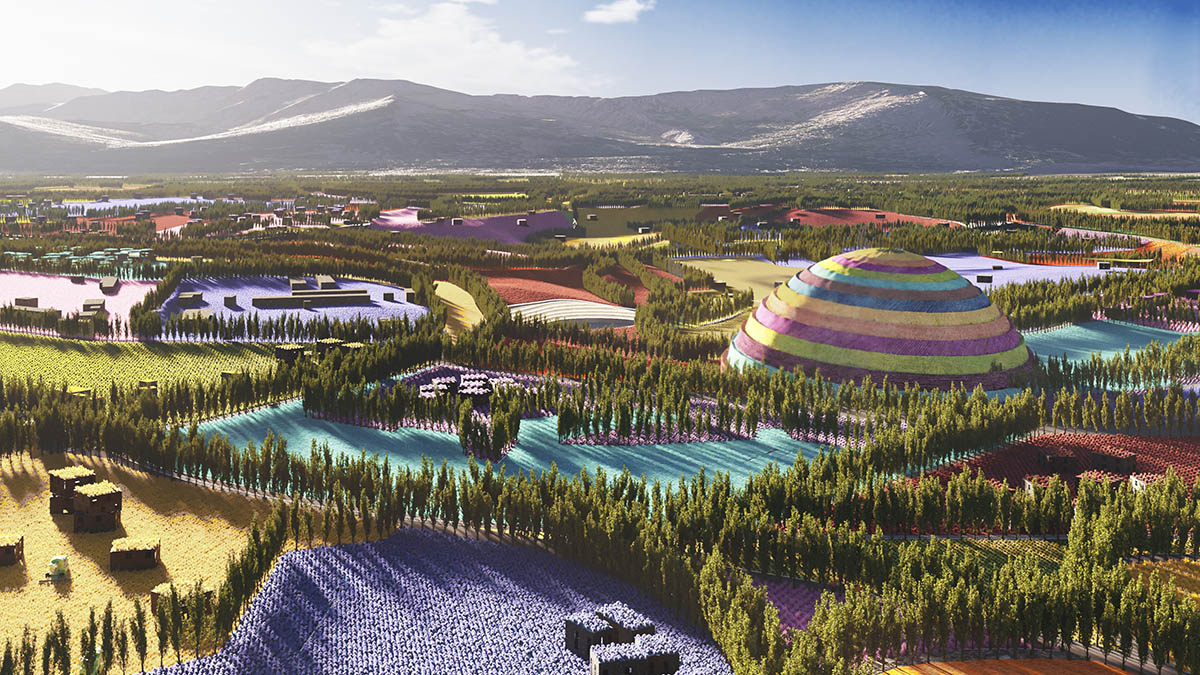 Commissioned by the Armenian non-profit organisation DAR Foundation for Regional Development and Competitiveness, the valley is set to become an ideal base for sustainable agriculture and ecotourism and welcome a new generation of residents.

Named after cosmonaut Yuri Gagarin, the valley is located near Lake Sevan, the largest lake in the Caucasus and only 50 kilometres from the capital Yerevan. Surrounded by mountains, the valley roughly incorporates 11,000 inhabitants distributed in several villages spread throughout the valley. The landscape is shaped by a patchwork of different pieces of land, of which the local community owns about one third.

MVRDV's vision for the area seeks for the potential of the valley, while it is optimised and enhanced with various facilities. 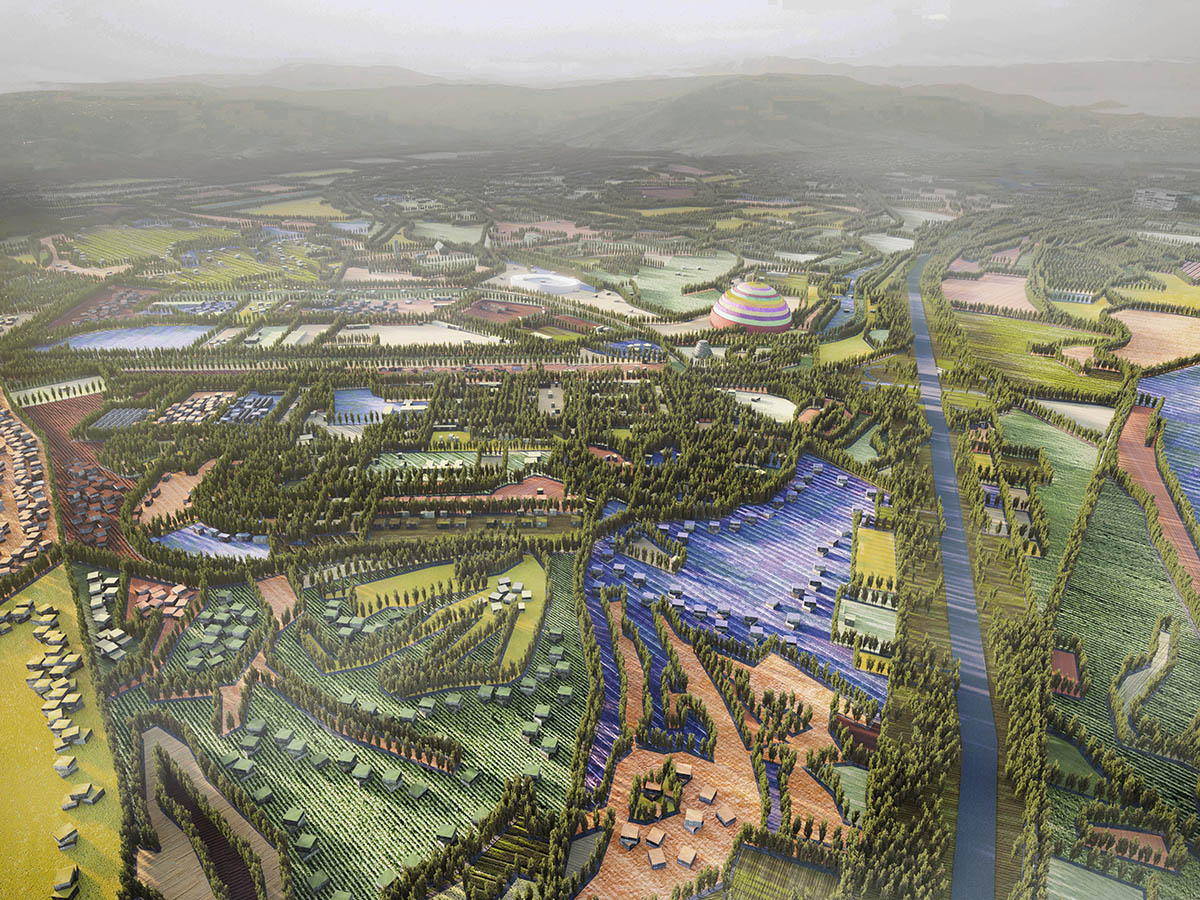 "The ambition, which will be realised in consultation with local parties, is to turn the valley into a versatile and future-proof landscape that is suitable for sustainable agriculture on various scales," said MVRDV.

"Gagarin Valley must become a more attractive place to live in, as well as an area for ecotourism and recreation, serving as a destination for people to walk, hike, cycle, and ride horses."

In the first step, the studio aims to create a self-sustaining valley which will embrace the history of the area. The studio will preserve and reinforce the site's existing mosaic of 10,000 existing plots and integrate a water system in this dry region by lining the boundaries between them with canals, public paths, and greenery. 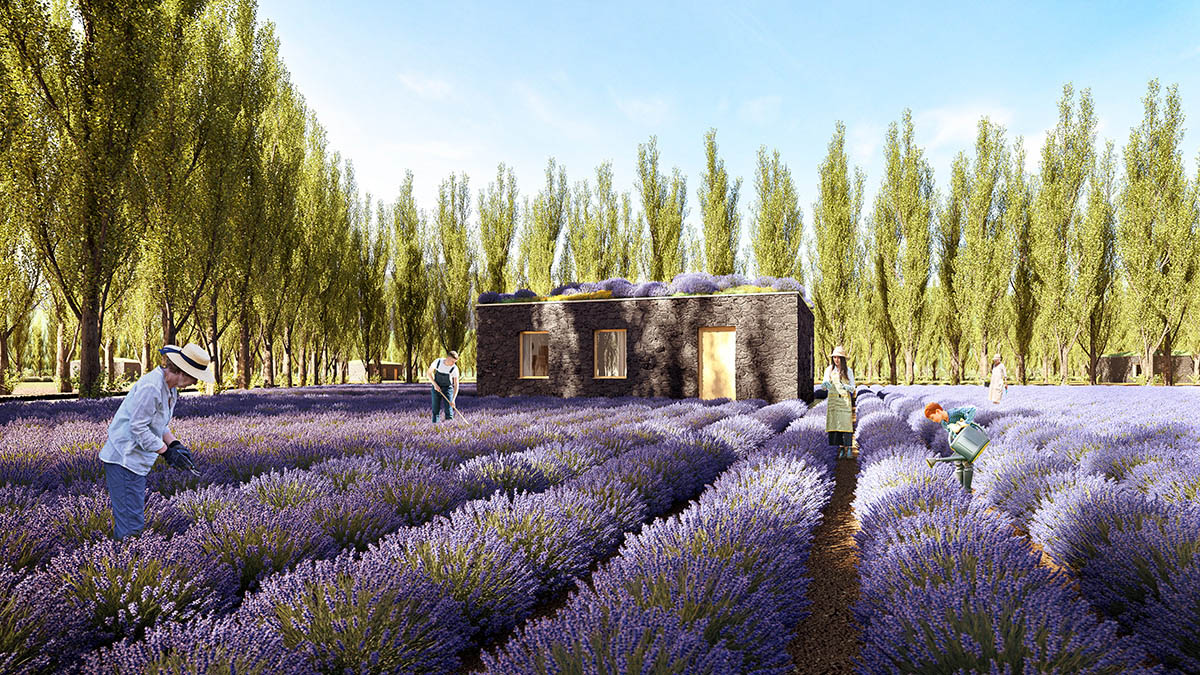 "This forms the base of the valley masterplan, reducing evaporation while enhancing water buffers and biodiversity. On each plot, different species will be planted," added MVRDV.

"This will not only make the landscape visually more attractive, but will also stimulate economic diversity."

In the valley, existing roads will continue to form the starting point for connecting all the villages, while additional walking and cycling paths will be created within existing structures. The team will improve water management tremendously: the restoration and enlargement of the route of the Hrazdan River, in combination with the new canal system, is an important part of the vision, and water reservoirs in the mountains and other water sources can be used to irrigate farmland. 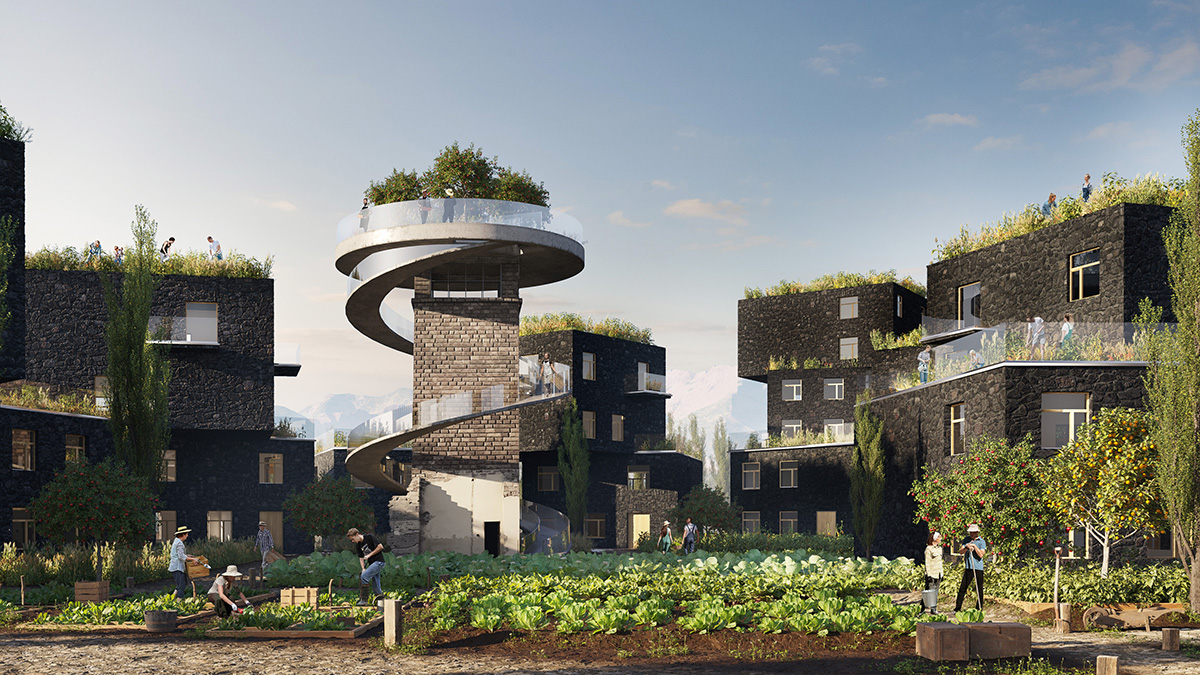 "The area is named after Yuri Gagarin, who was the first human to orbit the earth; he saw the planet’s vulnerability, a house in need of extra care, as many other astronauts have since stressed," said MVRDV founding partner Winy Maas.

"I share that concern: stimulating biodiversity, improving water management and the ecosystem is of great importance for the future of the Gagarin Valley and the world."

"The valley can be seen as a series of test fields for the 10,000 species that will soon flourish there, an enrichment that will give the area the appearance of a garden of Eden," Maas added. 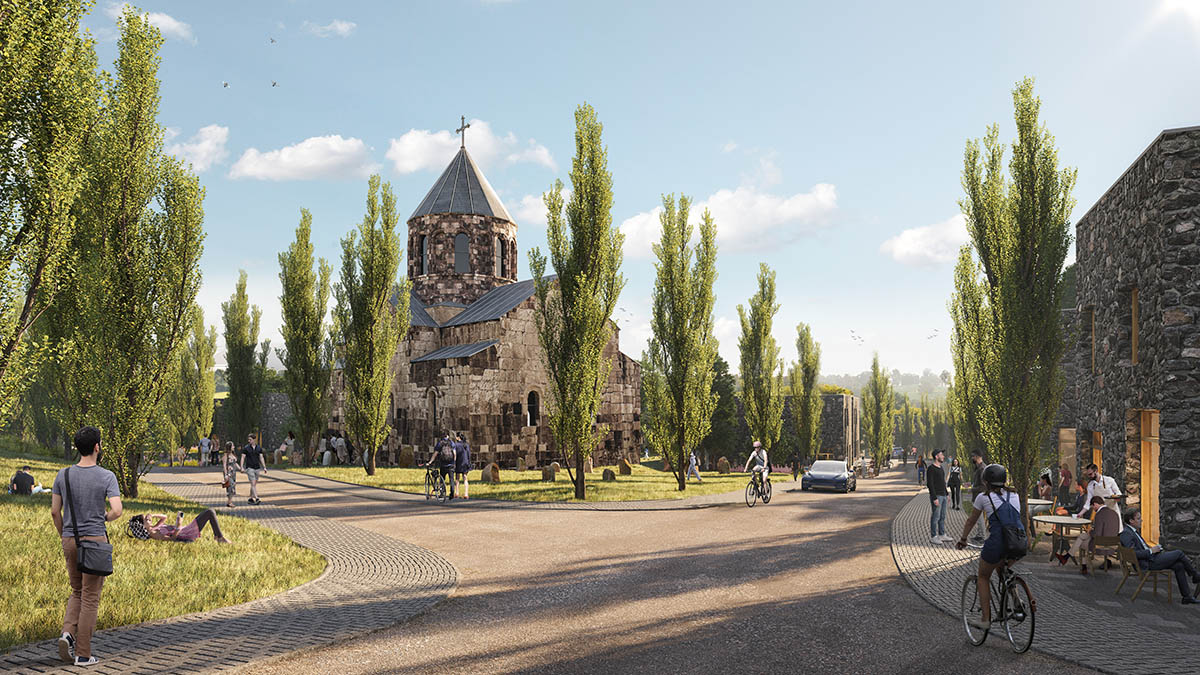 The Gagarin Valley contains several villages, which some of them were built during Soviet times, and these will be transformed into the new buildings to reduce waste from old buildings.

The design of the new buildings is inspired by traditional Armenian farmhouses, and the new homes will incorporate green, vegetated roofs.

"This new future and the innovative, sustainable housing will make the valley attractive for different target groups and make the area attractive again for young Armenians," added MVRDV. 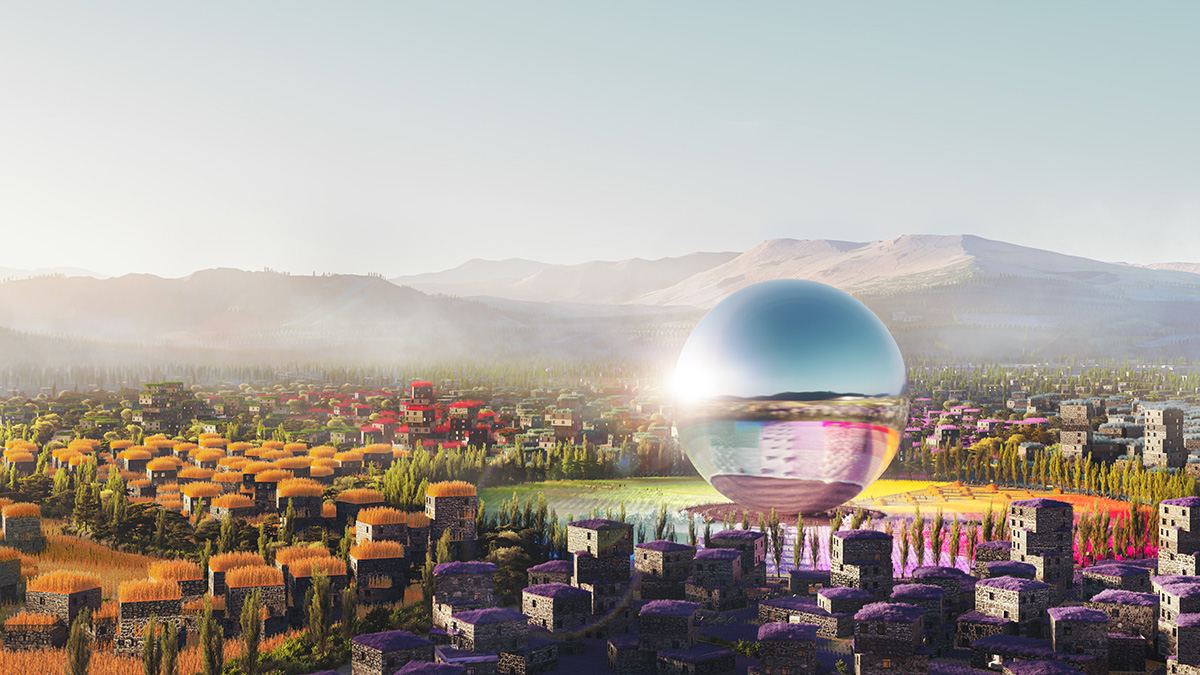 The masterplan, comprised of a patchwork of 10,000 different gardens, will contain various facilities that will make a stay in the valley even more attractive. In the heart of the valley there will be an educational agricultural centre, around which the highest density can be found, with houses stacked to form vertical villages.

"We designed a sphere that acts as mini-planet, where the classrooms surround a spherical void and where all the species of the valley and beyond are shown and monitored," added Winy Maas.

"The sphere will be surrounded by a central park that contains all the species – a scientific arboretum, reflected in the mirroring sphere. Gagarin would have loved it, I think." 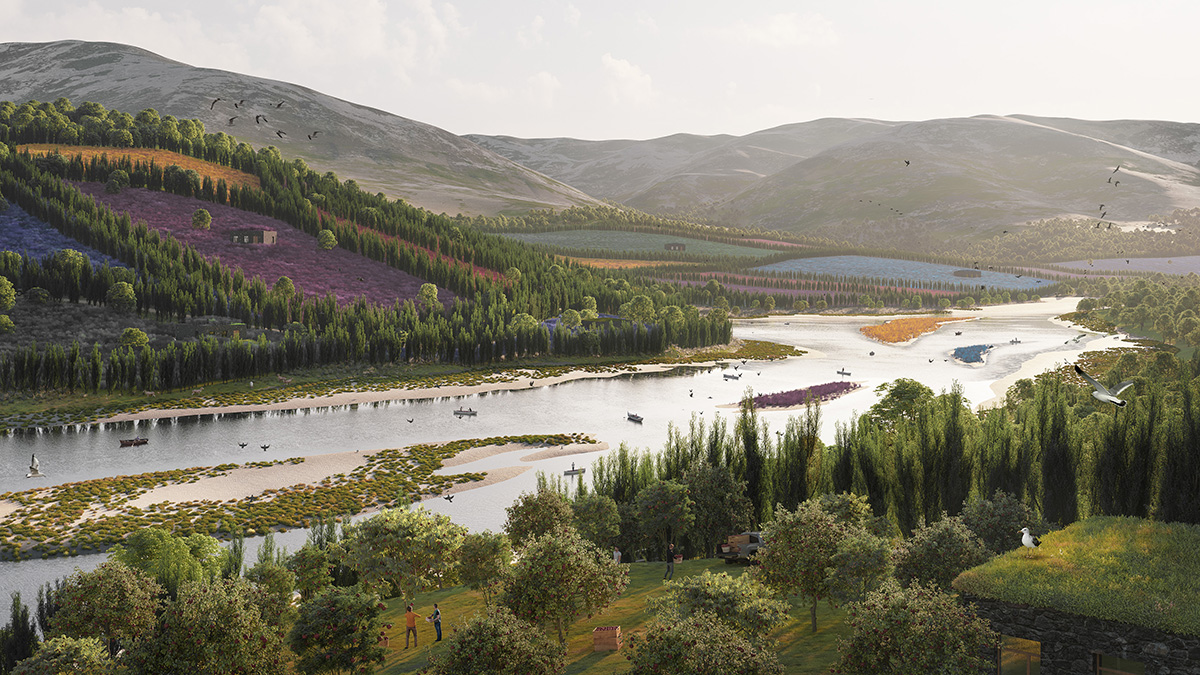 Armenian government wants to provide financial support for sustainable agriculture and has ambitions to revive tourism to the area. By 2026, the country aims to attract some 2.5 million tourists a year, to which the transformed Gagarin Valley will make a significant contribution. 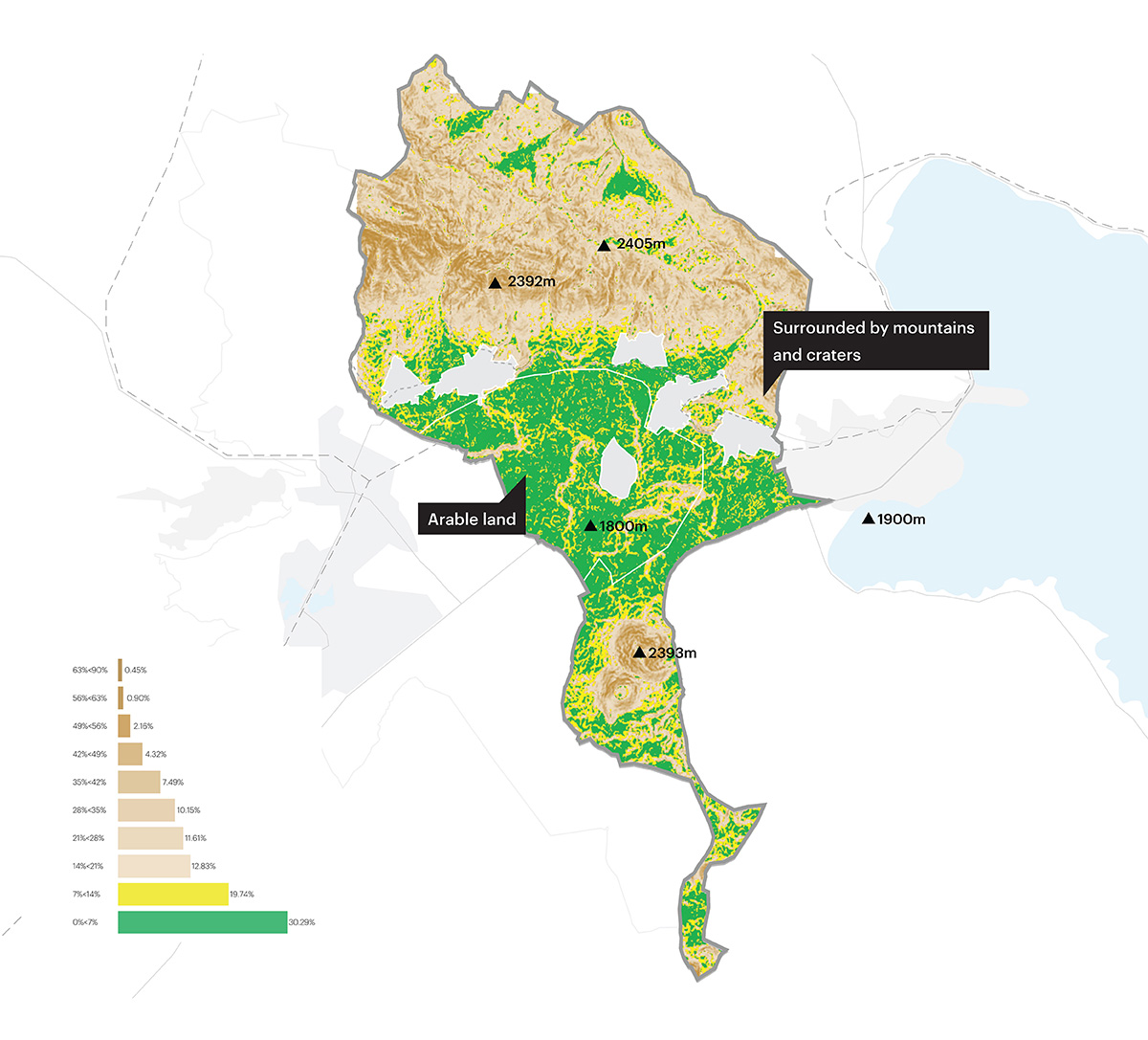 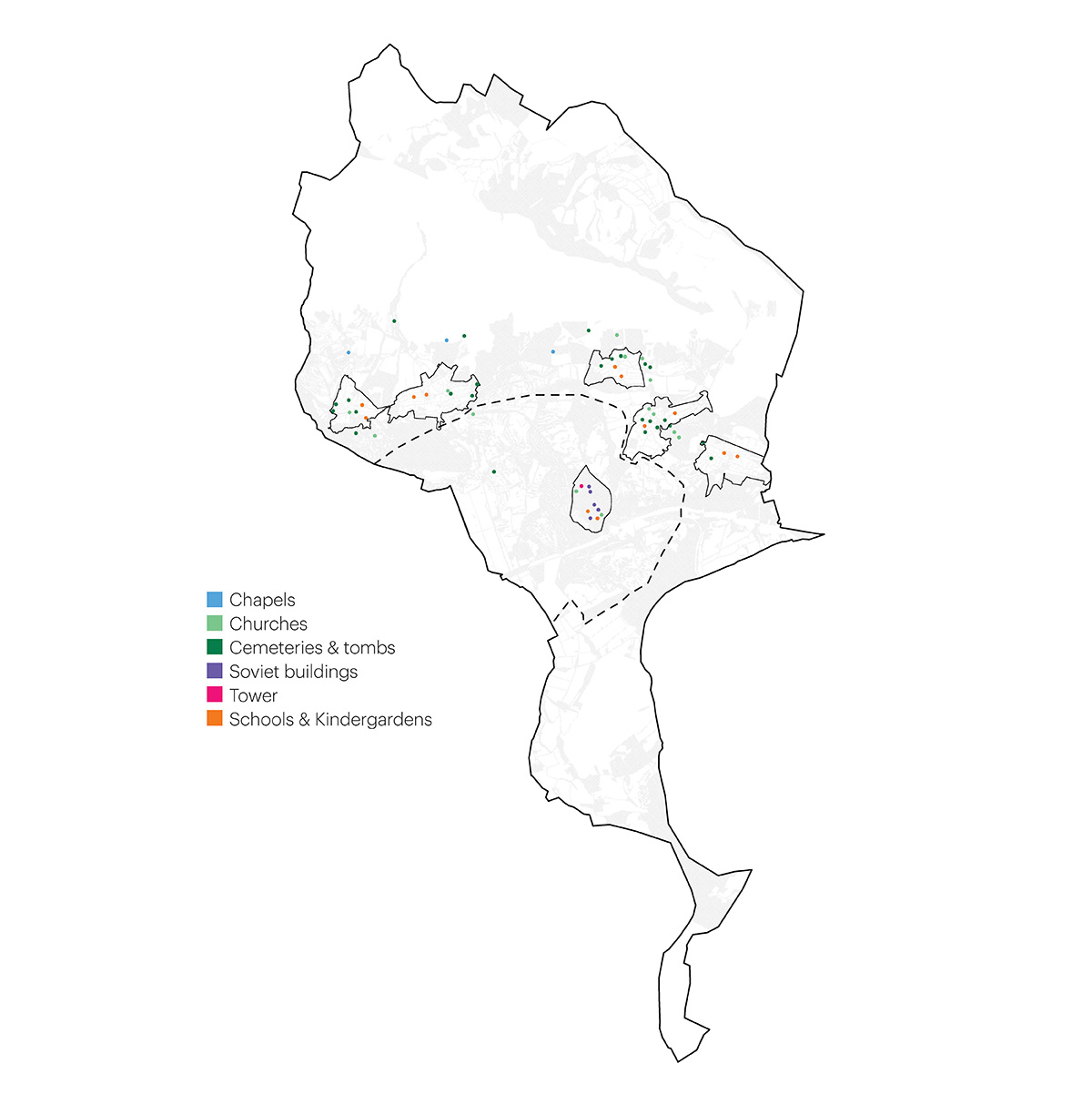 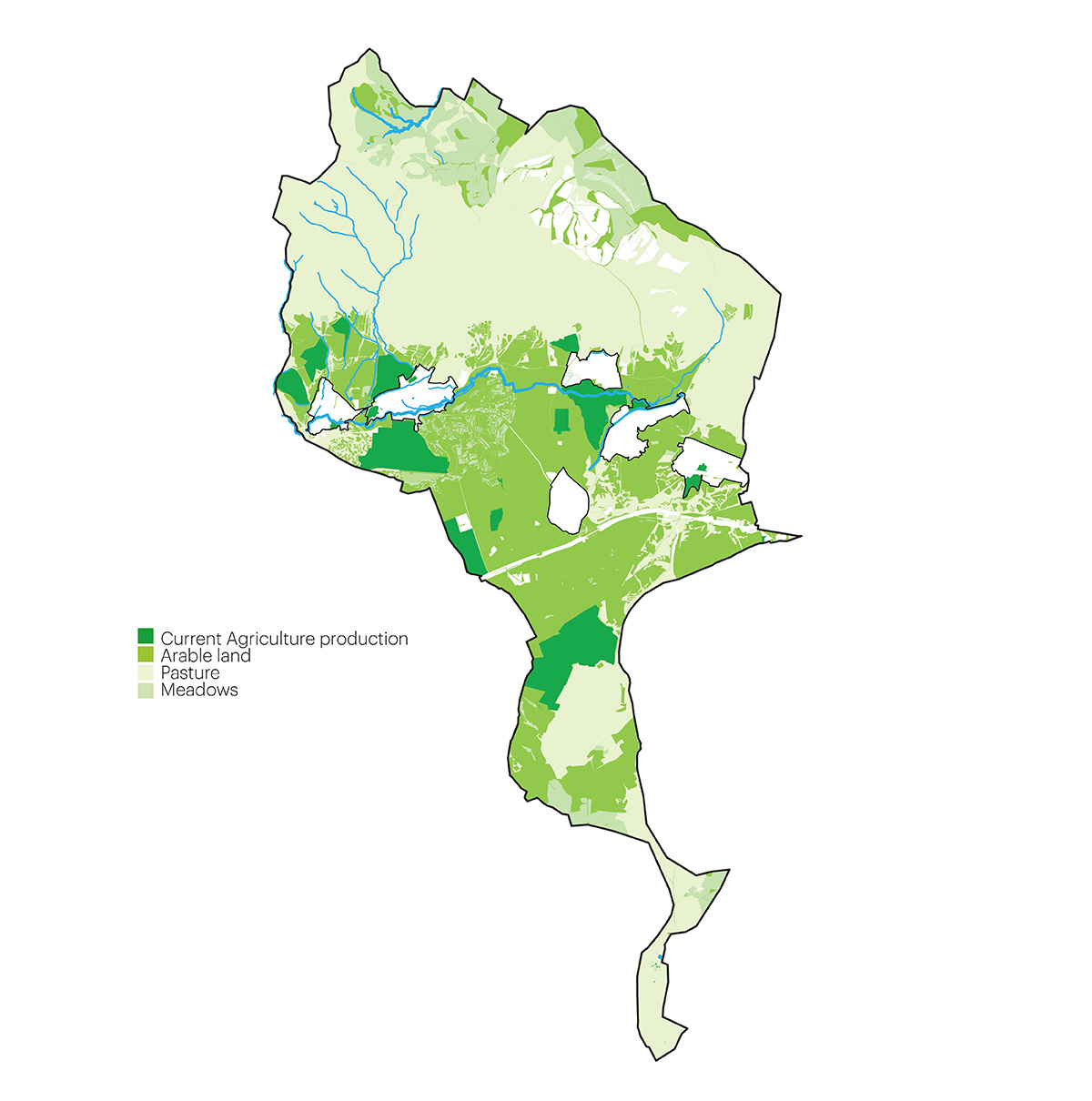 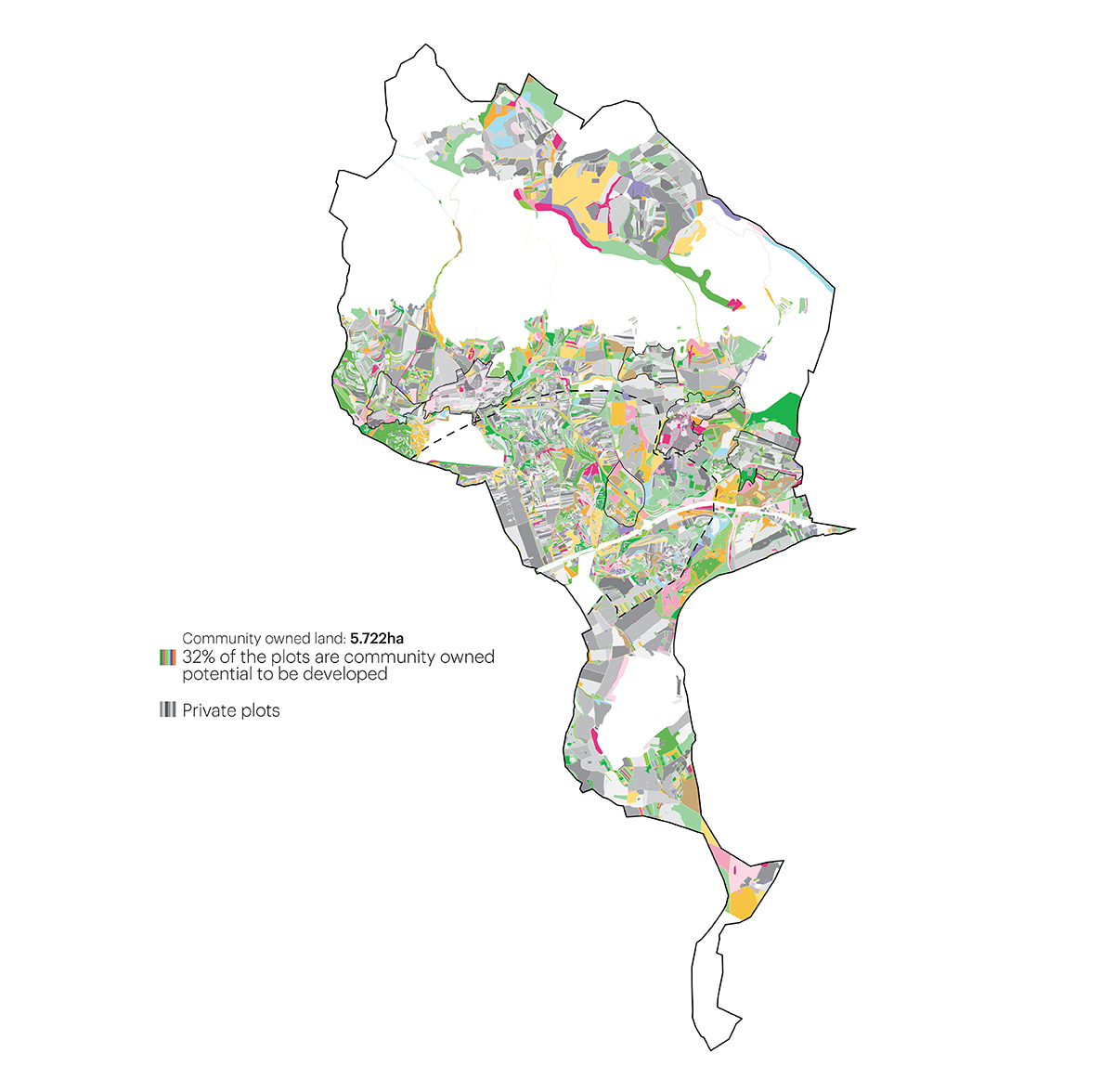 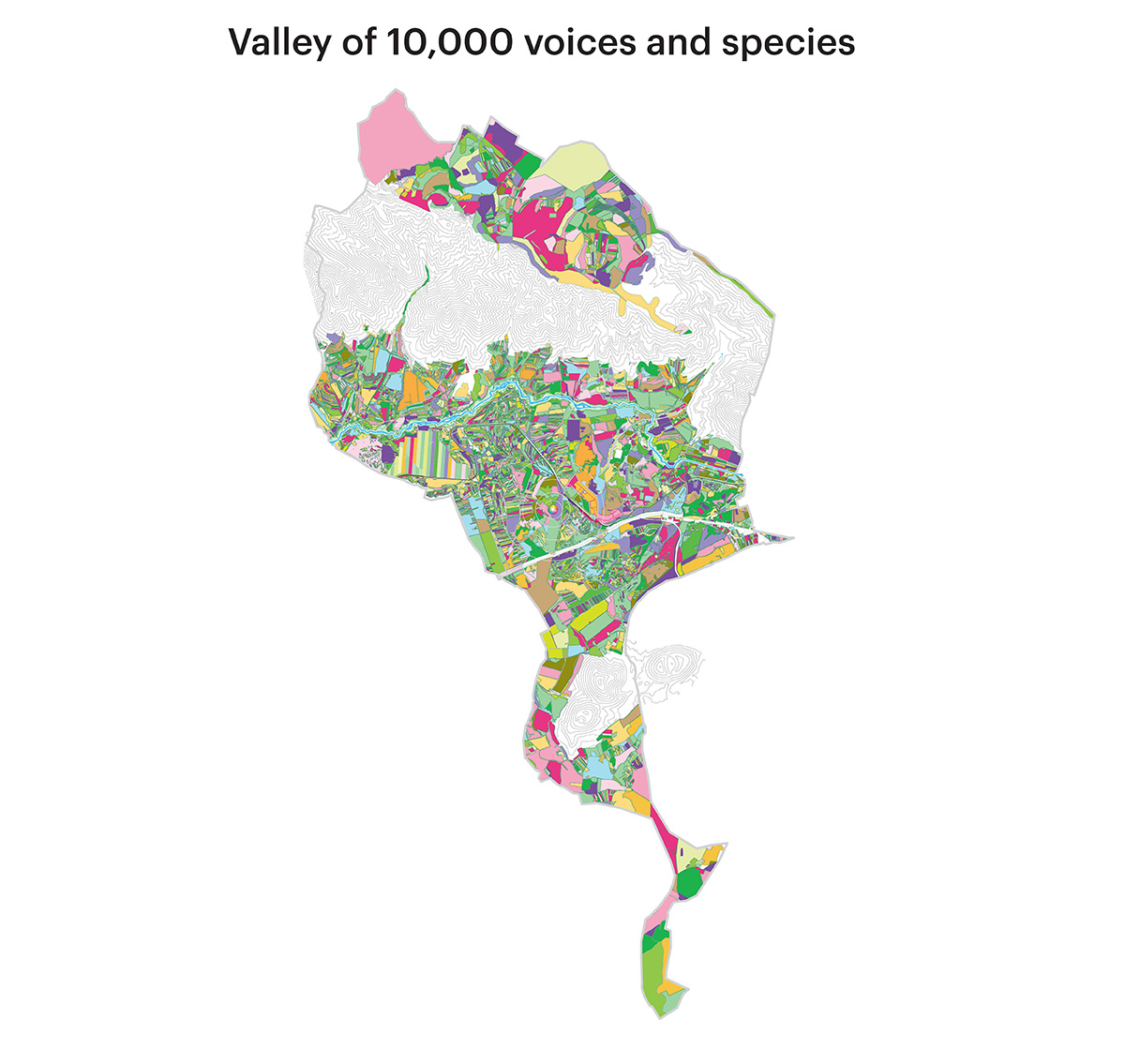 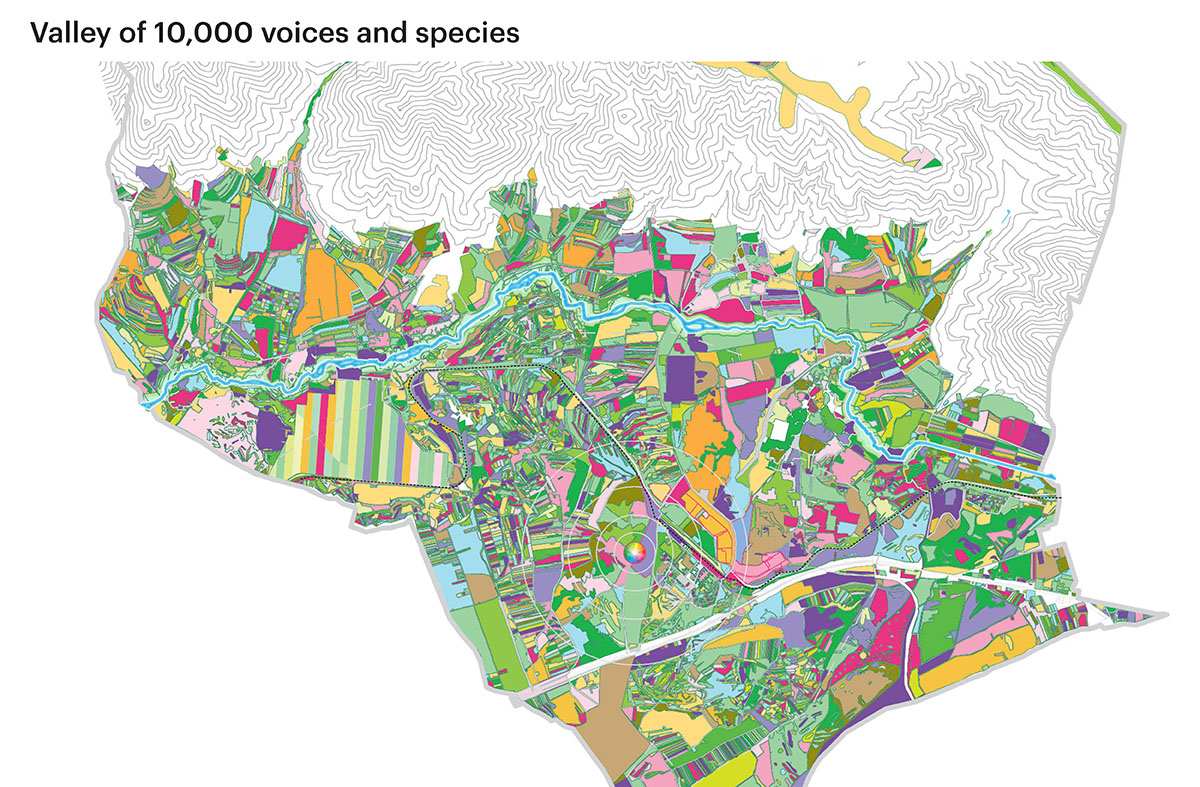 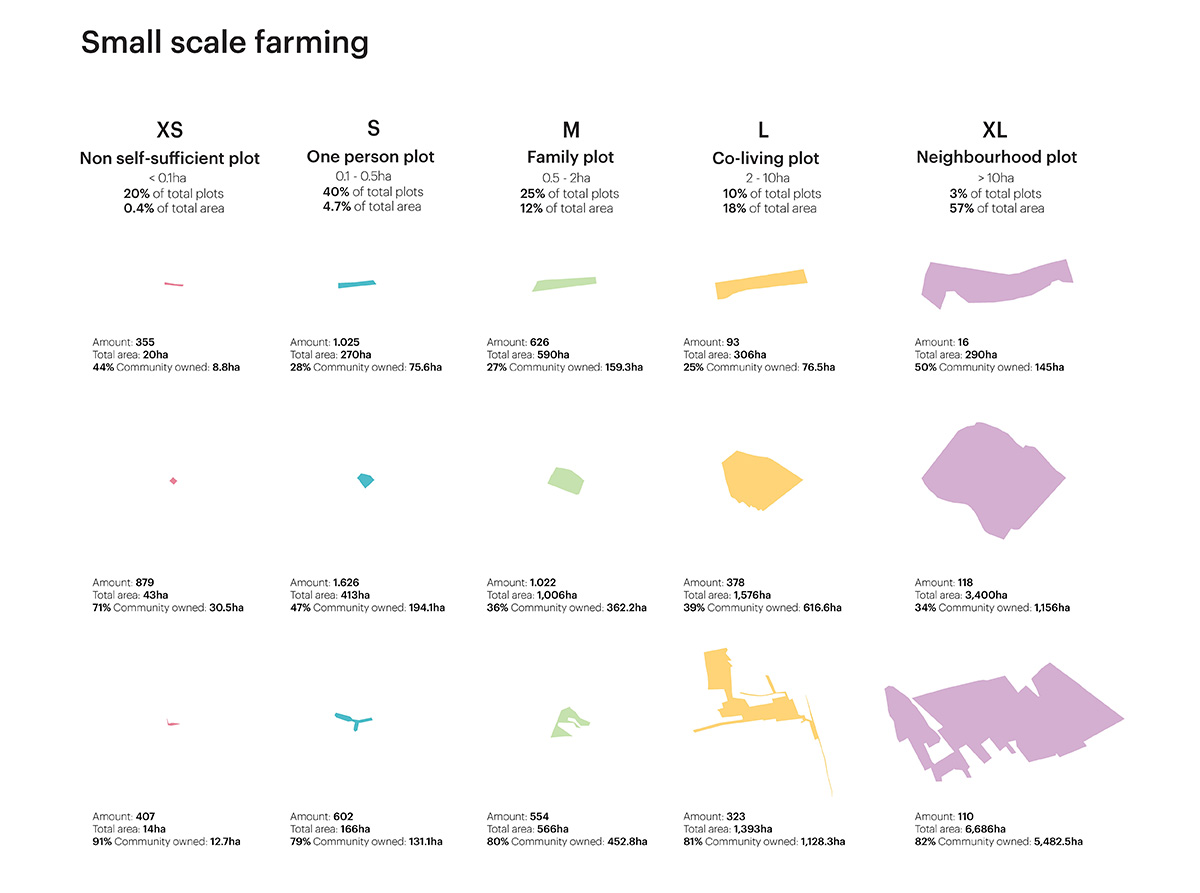 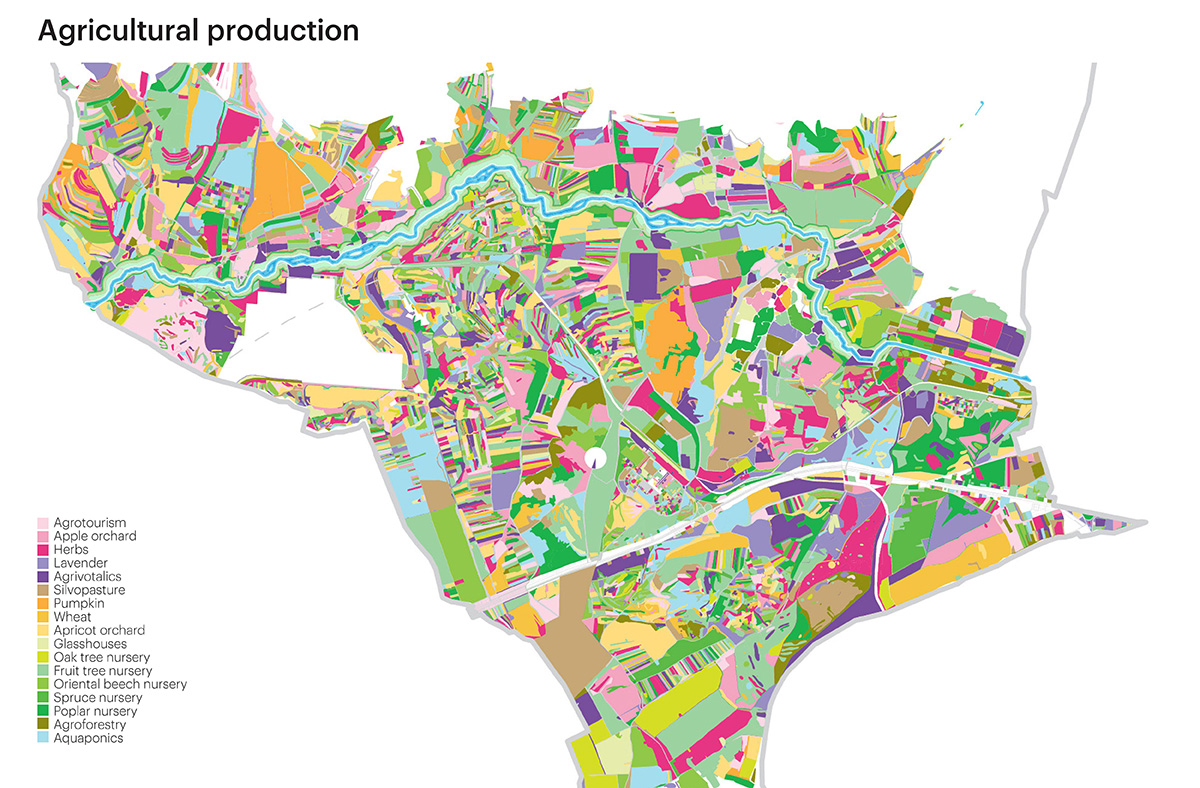 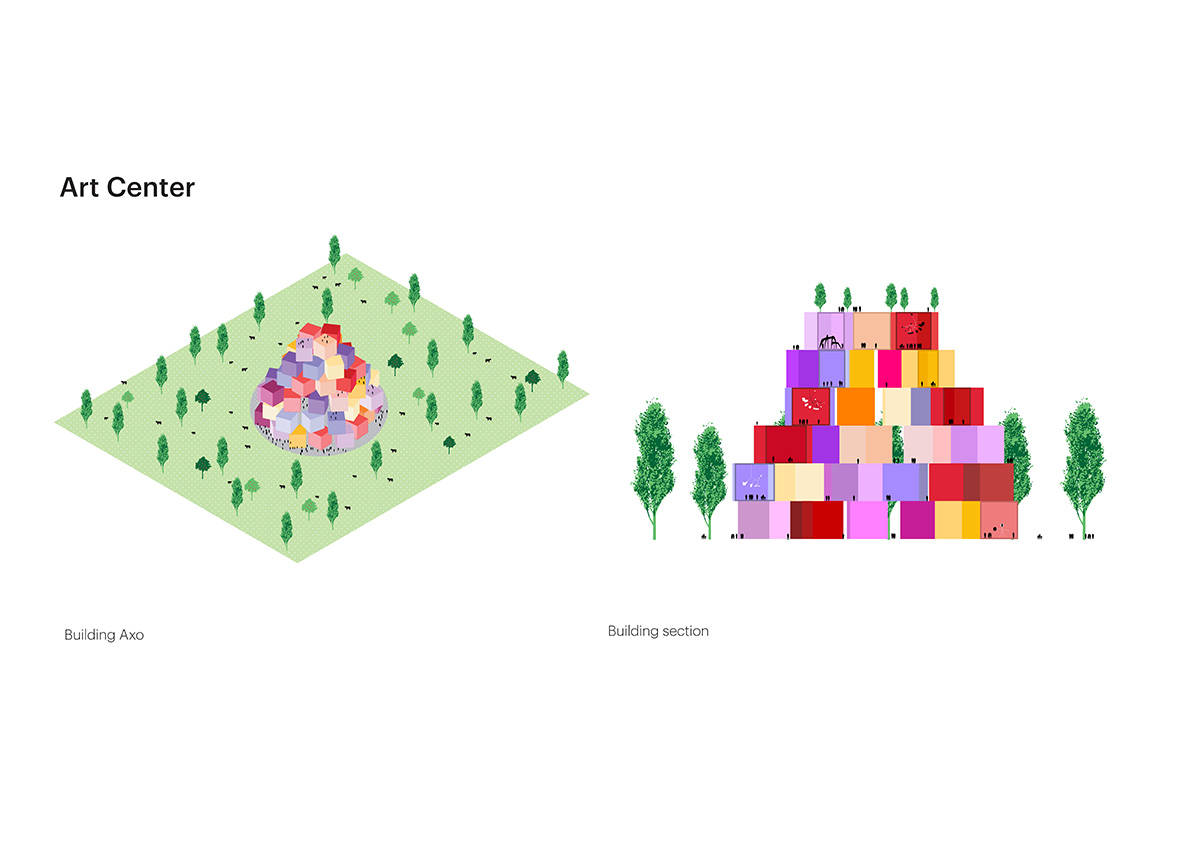 Gagarin Valley is not MVRDV's first project in Armenia, the studio won an international competition in 2019 to design the EU TUMO Convergence Center, a 25,000-square-metre educational facility in Yerevan, Armenia.

All images courtesy of MVRDV unless otherwise stated.