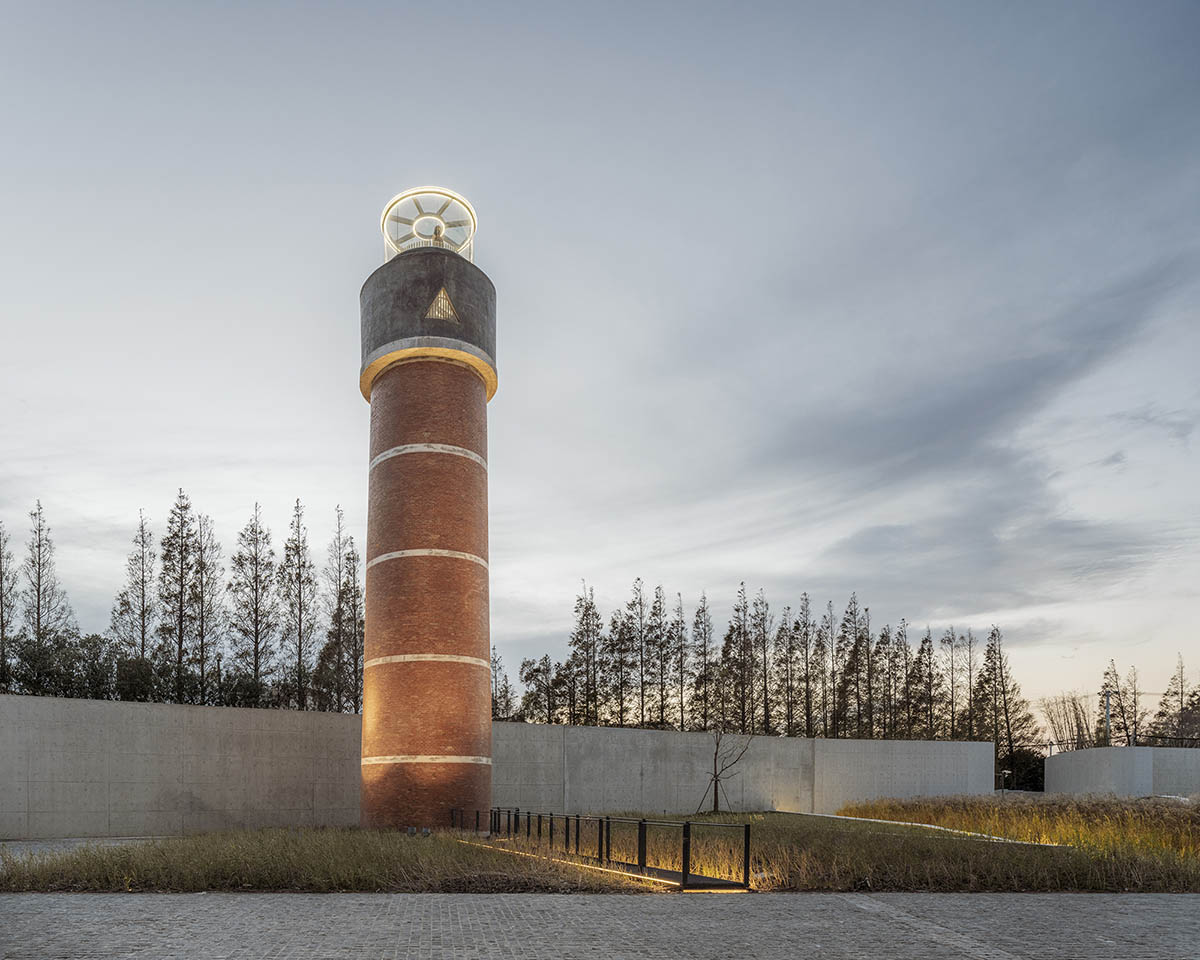 Shanghai-based architecture practice Wutopia Lab has transformed an abandoned water tower at Dongtanyuan, the former 12th Company of Qianshao State Farm, a subsidiary of Bright Food (Group), into a memorial for local people.

Called The Memorial of Everyman, the 25-square-metre building is designed to serve as a memorial to all the ordinary people who performed heroic acts in desperate times. 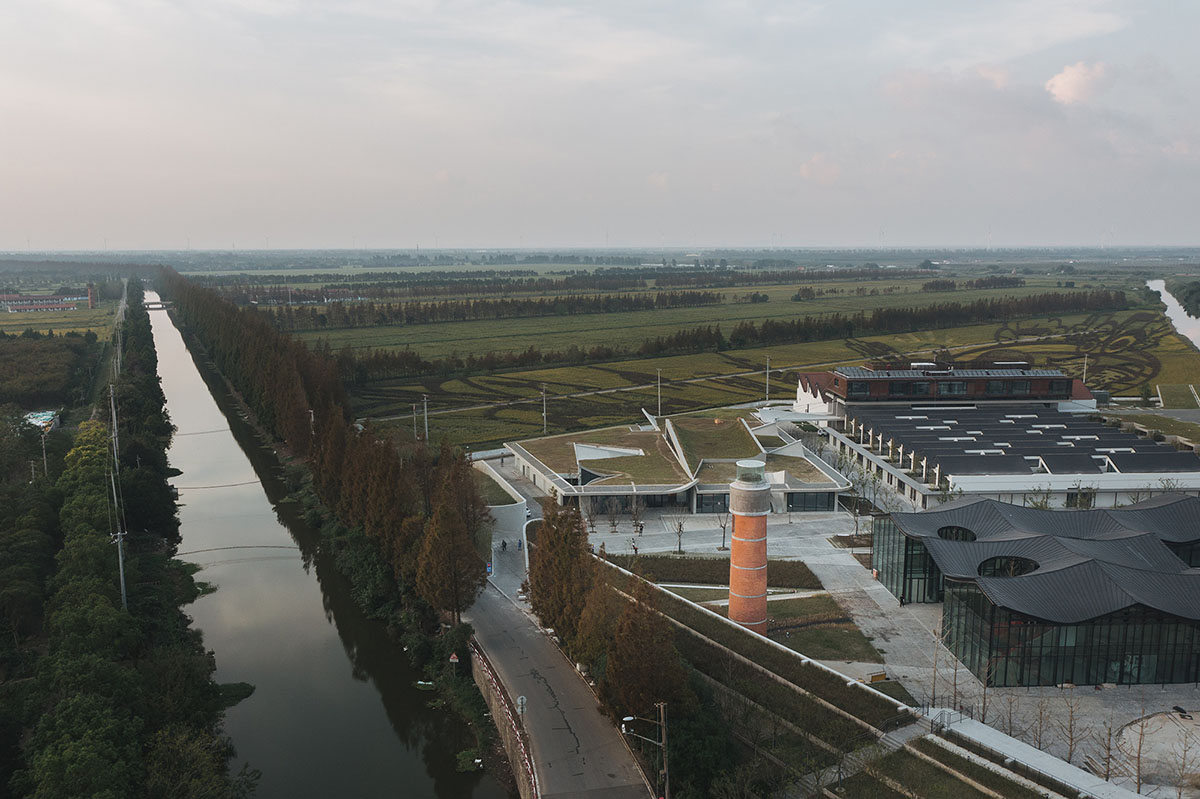 Wutopia Lab explains the story of the project with its own words. The client wanted to convert the abandoned water tower into a complementary architectural space to the conference center hotel (renovated weaving factory) next to it, programmed as a cafe or a suite with special features.

The project was put on hold for 40 days because my wife, one of the founders of the studio, was hospitalized due to illness and I, as a family member, had to accompany her in the hospital in confinement under epidemic management requirements. 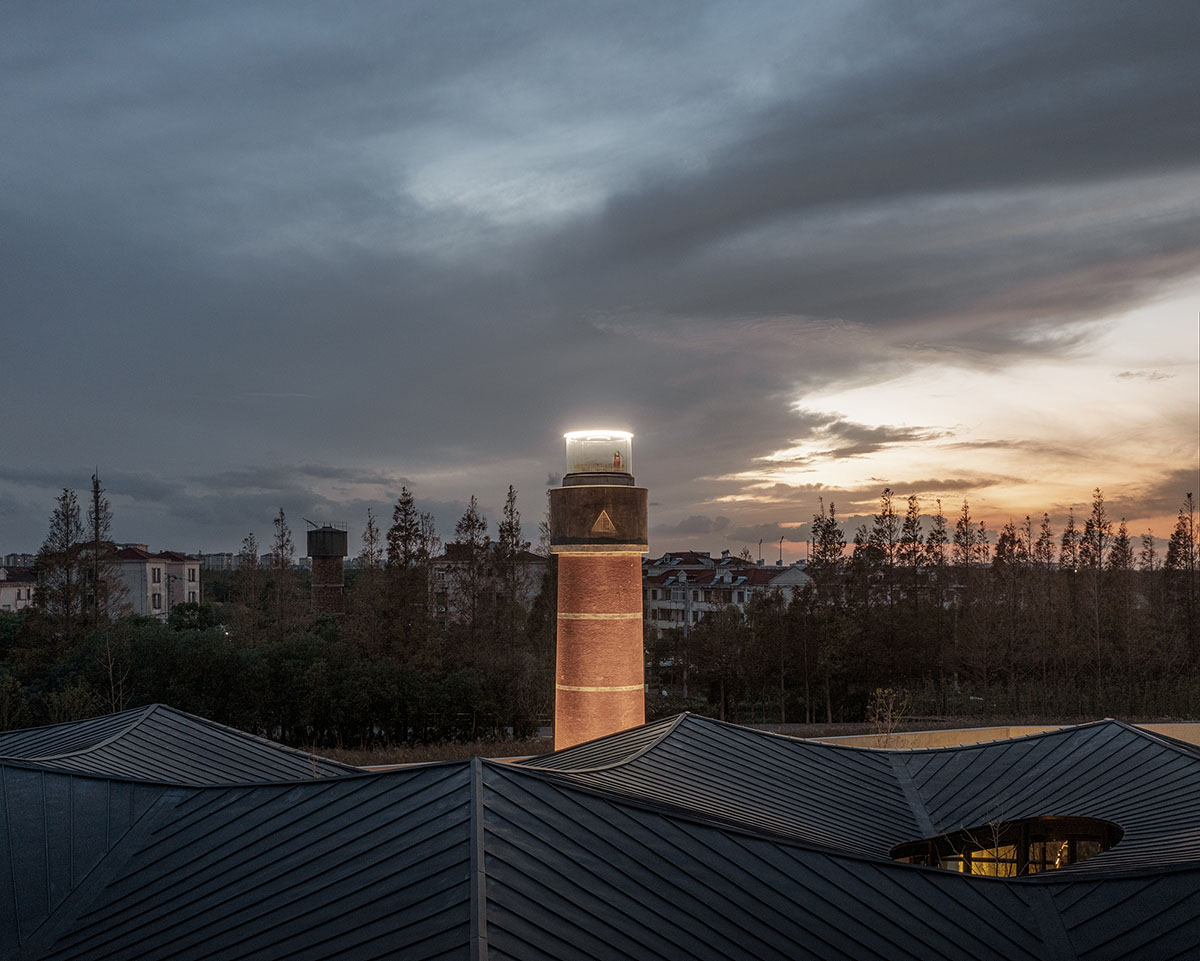 By the time I got out of the hospital and revisited the project, I had already lost interest in turning the water tower into some novelty space to excite those city dwellers. While discussing the background of the project, a touching anecdote about plugging leaks with one's body caught my attention. During a historical project of "reclaiming land from the sea", a worker named Lu Jingjuan, saw a pipe surge in the dike due to the rough tide, which could lead to a dam failure and thus make the whole sea construction project fail. So she jumped into the hole to plug it. Her heroic move encouraged many other workers  to jump into the water, using their bodies to ensure the safety of the dam.

People today who are well fed and clothed cannot understand the hardships of those times. During that era, in order to ensure that Shanghai had enough food supply, many city youths were drafted by the government to set up farms in the suburbs of Shanghai, including Chongming Island, to increase food production by creating land around the sea. Those people were working under extremely difficult conditions. Those youths are managed under semi-military organizations in the state farm. The water tower that provided safe drinking water was the central symbol of the organization's dormitory area. 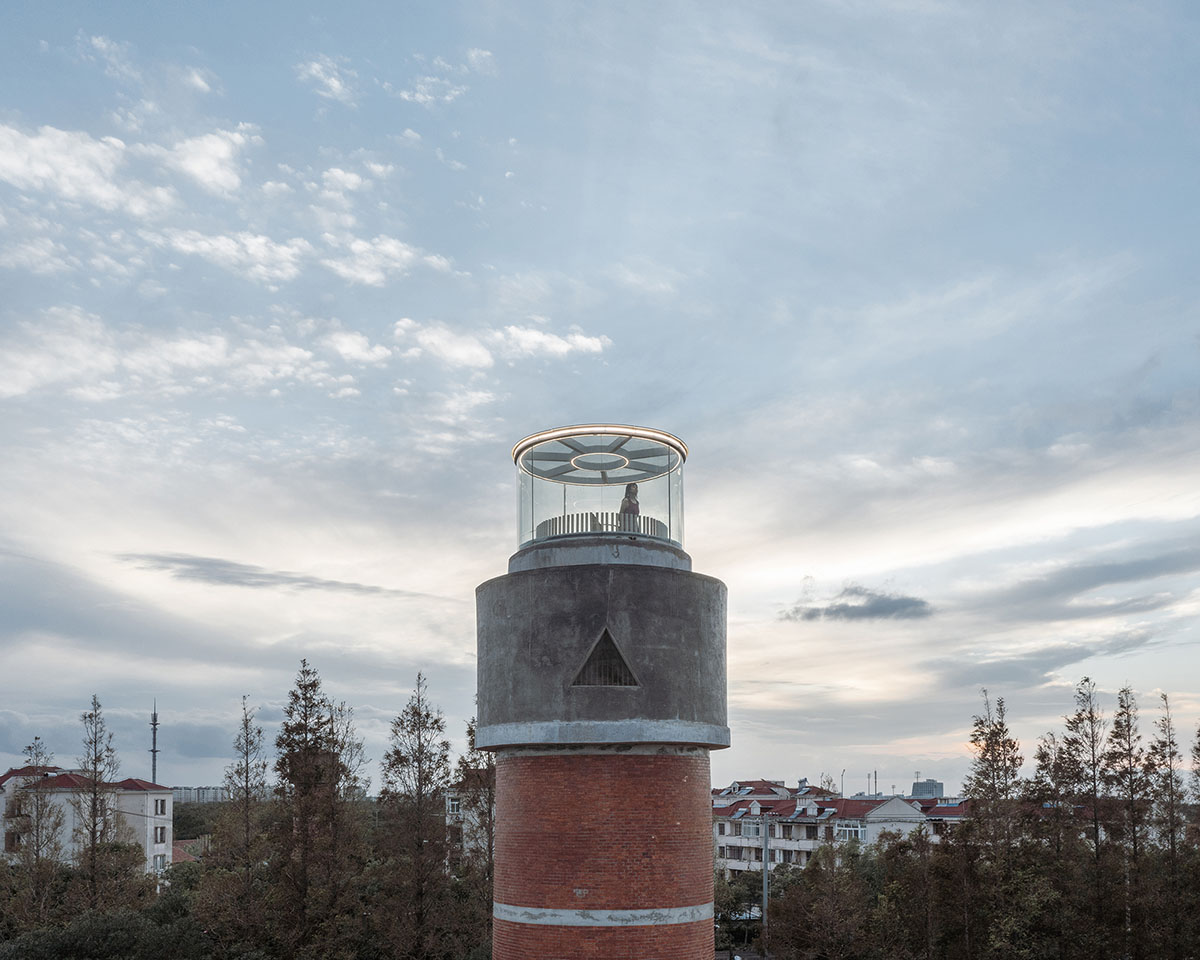 I could understand the desperation that Lu faced, just as I did when the doctor explained my wife's medical condition to me. That's why I was particularly moved by the heroic spirit of Lu Jingjuan who fought in the midst of despair to gain hope for the future.The consumerist suites and afternoon tea spaces are in a sense a vanish mask that covers up the real memories of some ordinary people and embellishes the somewhat flashy life of today, as if those struggles have never existed. That's not right.  Hence, I convinced our client to turn the water tower into a memorial to all the ordinary people who did heroic acts in desperate times. 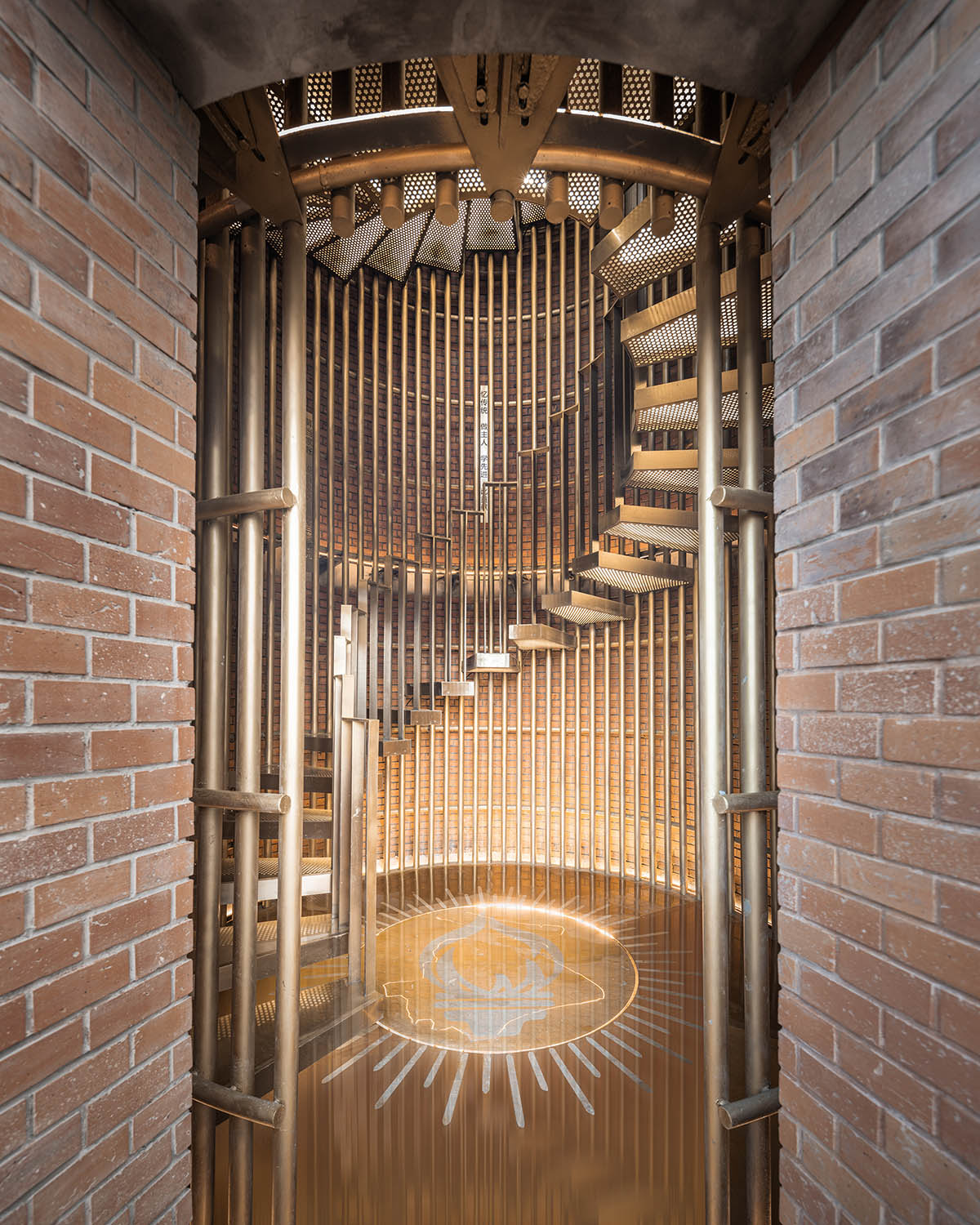 I saw the water tower as the breach hole of the dike. I designed a spiral staircase with a separate structure to symbolize those heroic ordinary people who plugged the leak with their bodies in the cavity of the water tower. This is a tower within another tower.

I used the gold color to symbolize the great gesture of these ordinary people. The 100-step staircase, symbolizing a century, is made of eighty-four 50 cm diameter metal rods that form a separate golden tower inside the water tower. At the bottom of the golden tower is a map of Shanghai, with the year on each step, a chronicle of events recorded on the metal rods, and on the walls of the water storage bin of the water tower is a mural of photo transfers of the polder scene back then. 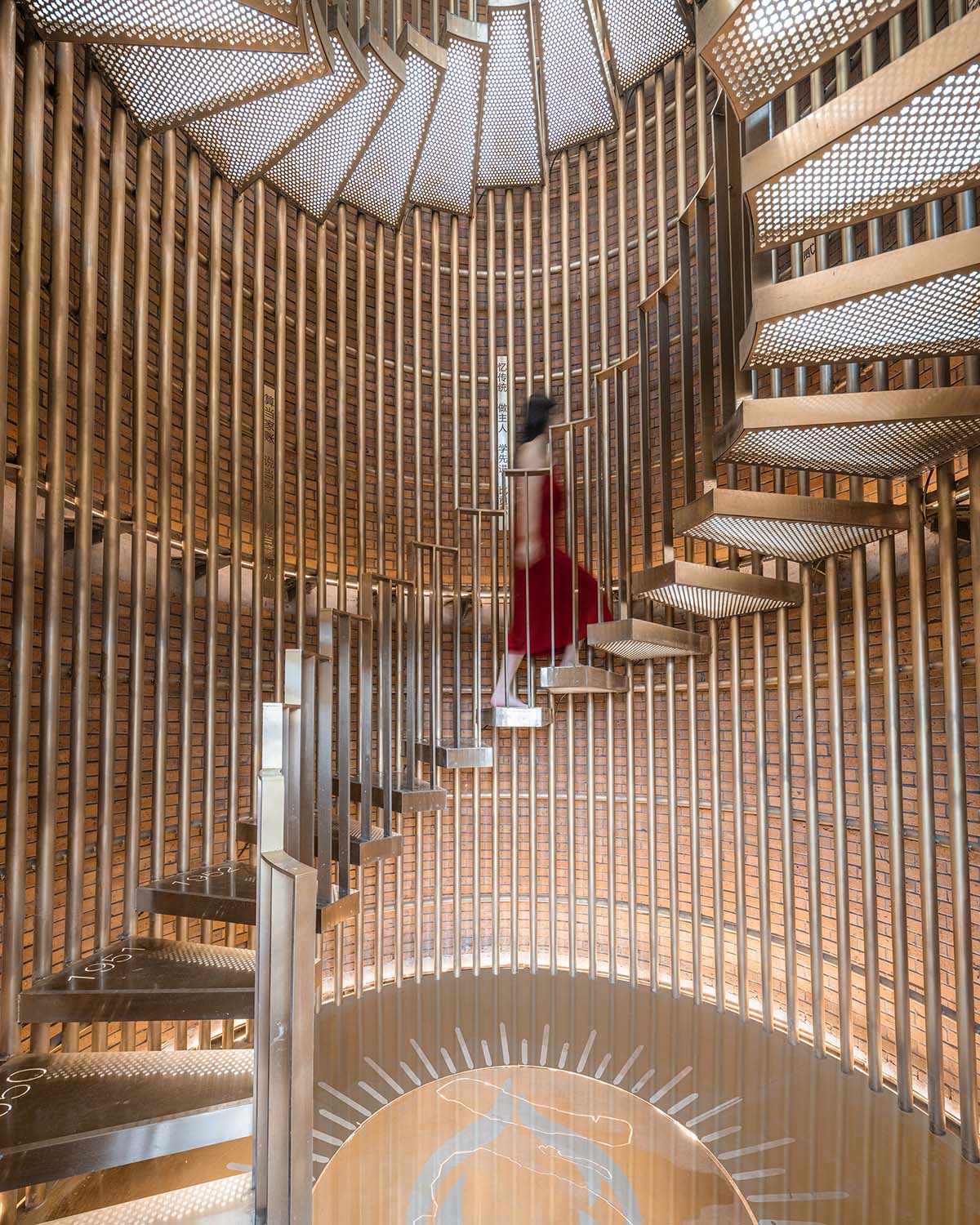 Finally, the top of the water tower opens so that visitors can look into the distance after ascending to the top. The glass cover at the top is weight-bearing by the glass itself. 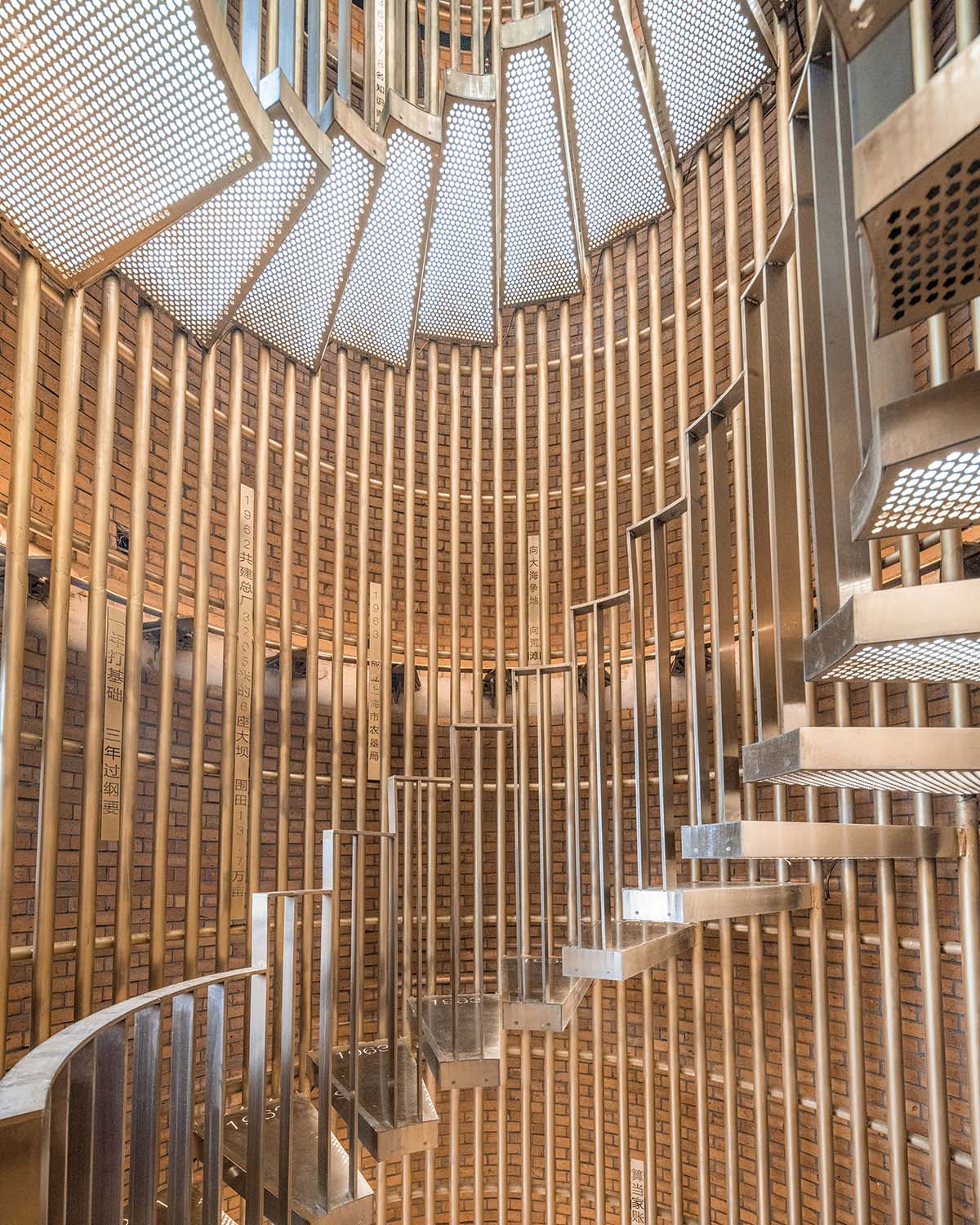 Today there is no need to enclose the sea for land any more, but those heroic acts of ordinary people are worth remembering. As I stand at the top of the water tower, I look at the thin horizon in the distance. That's where the sea stops. 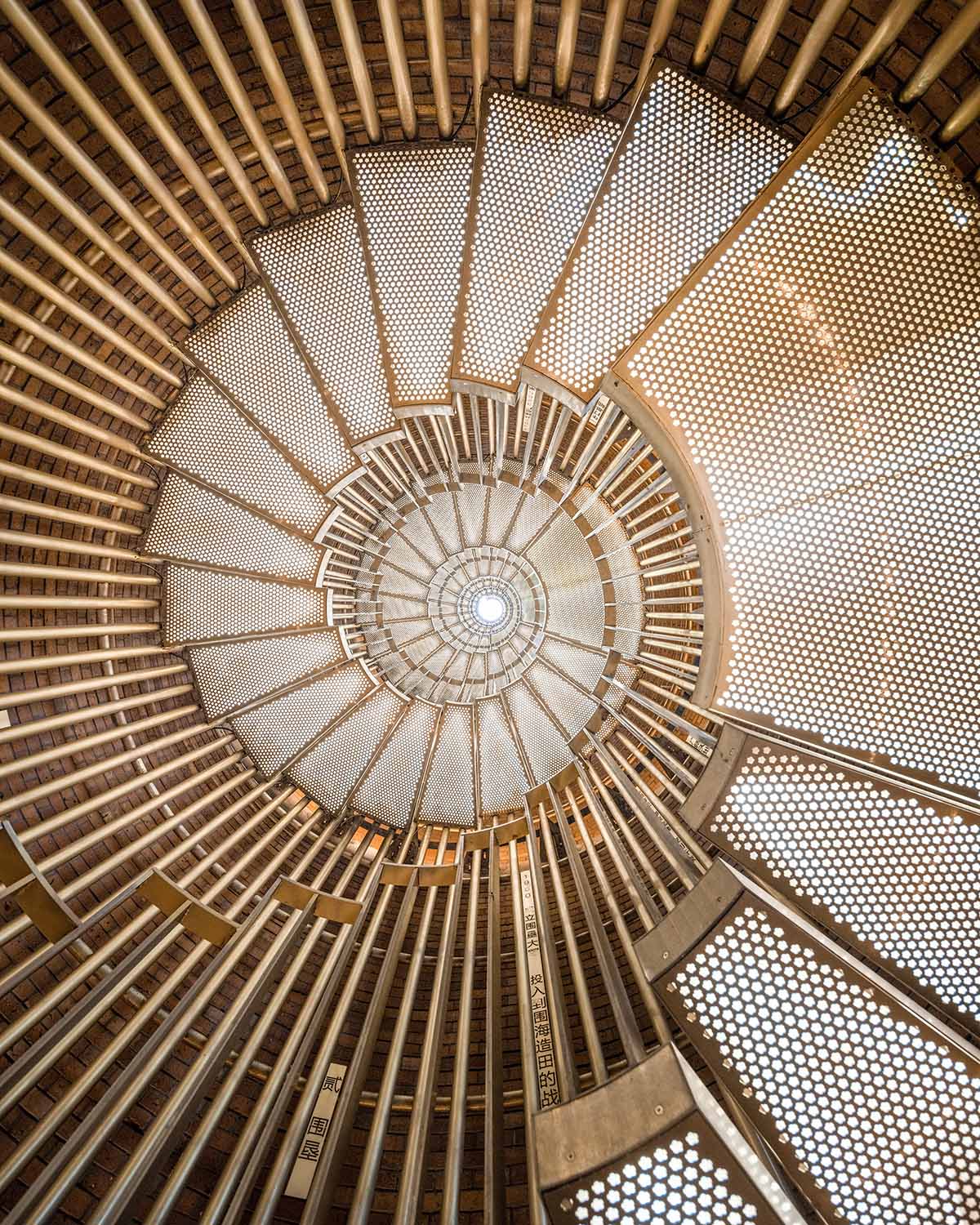 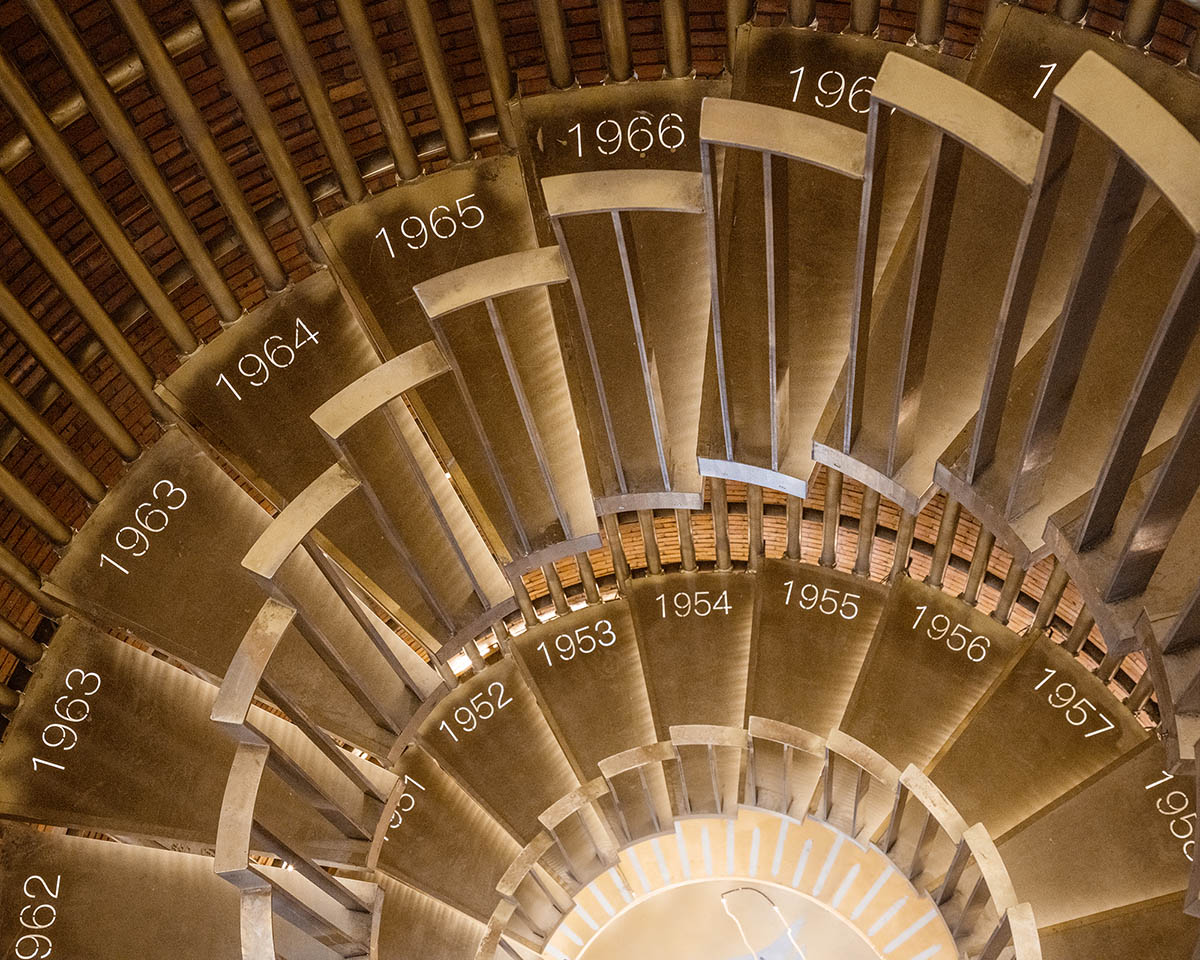 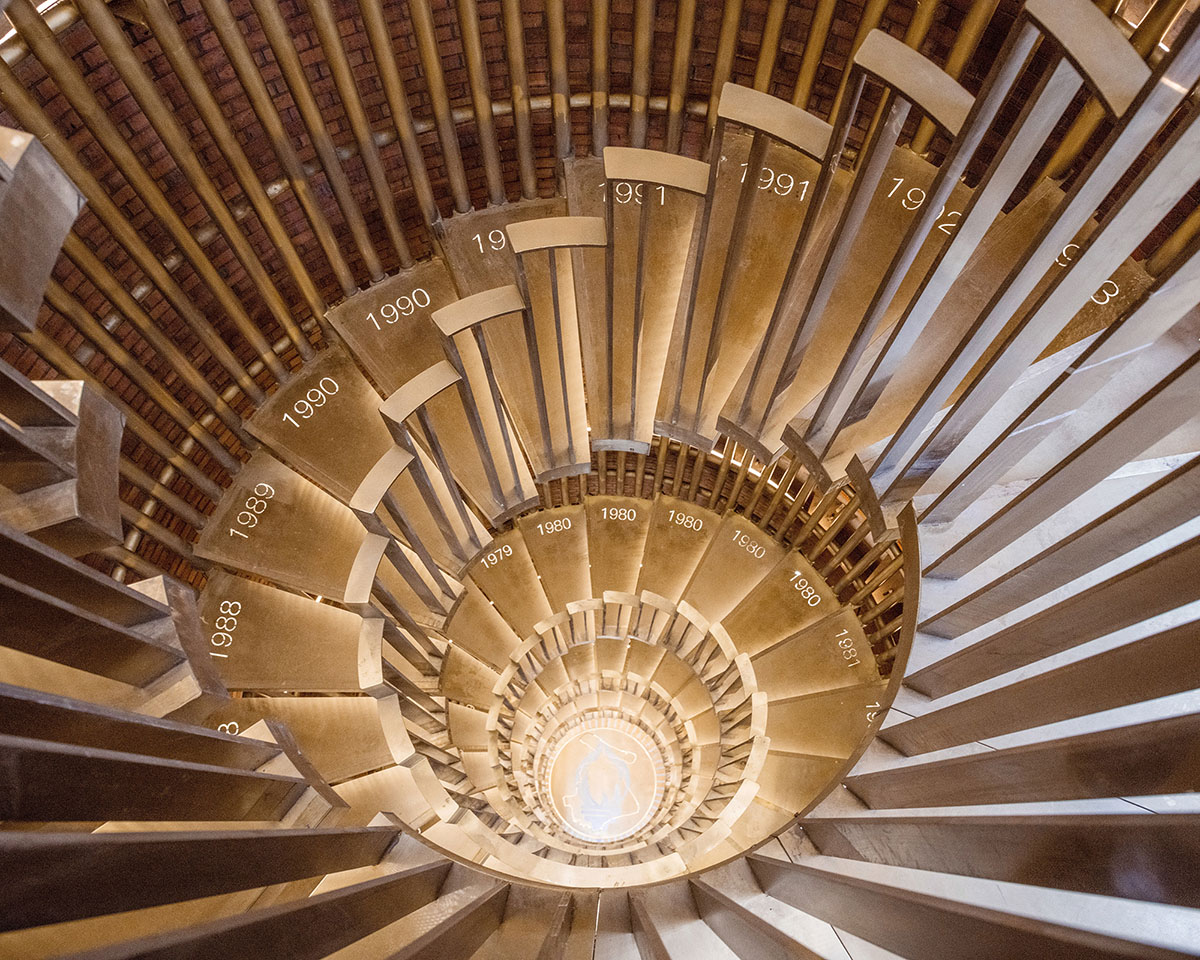 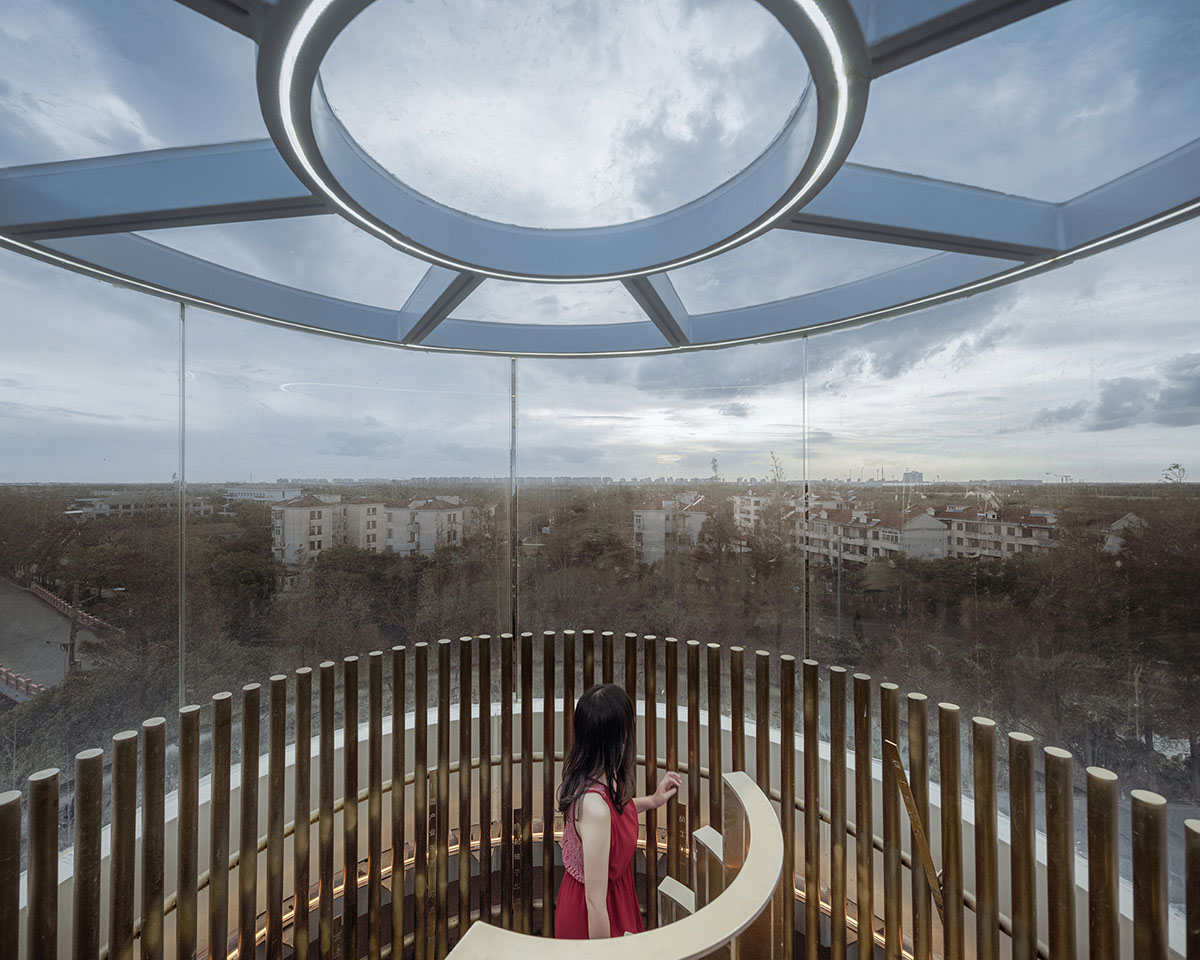 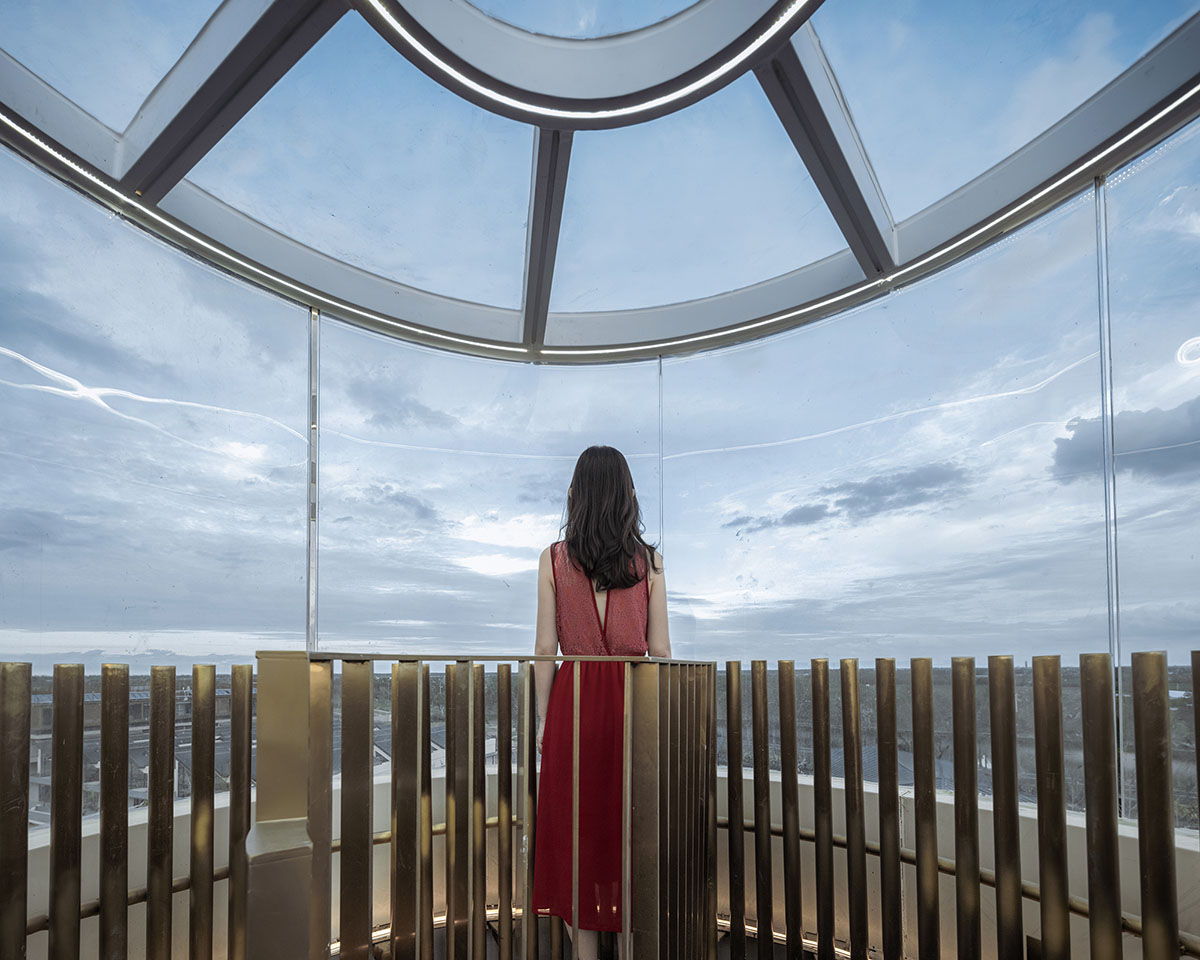 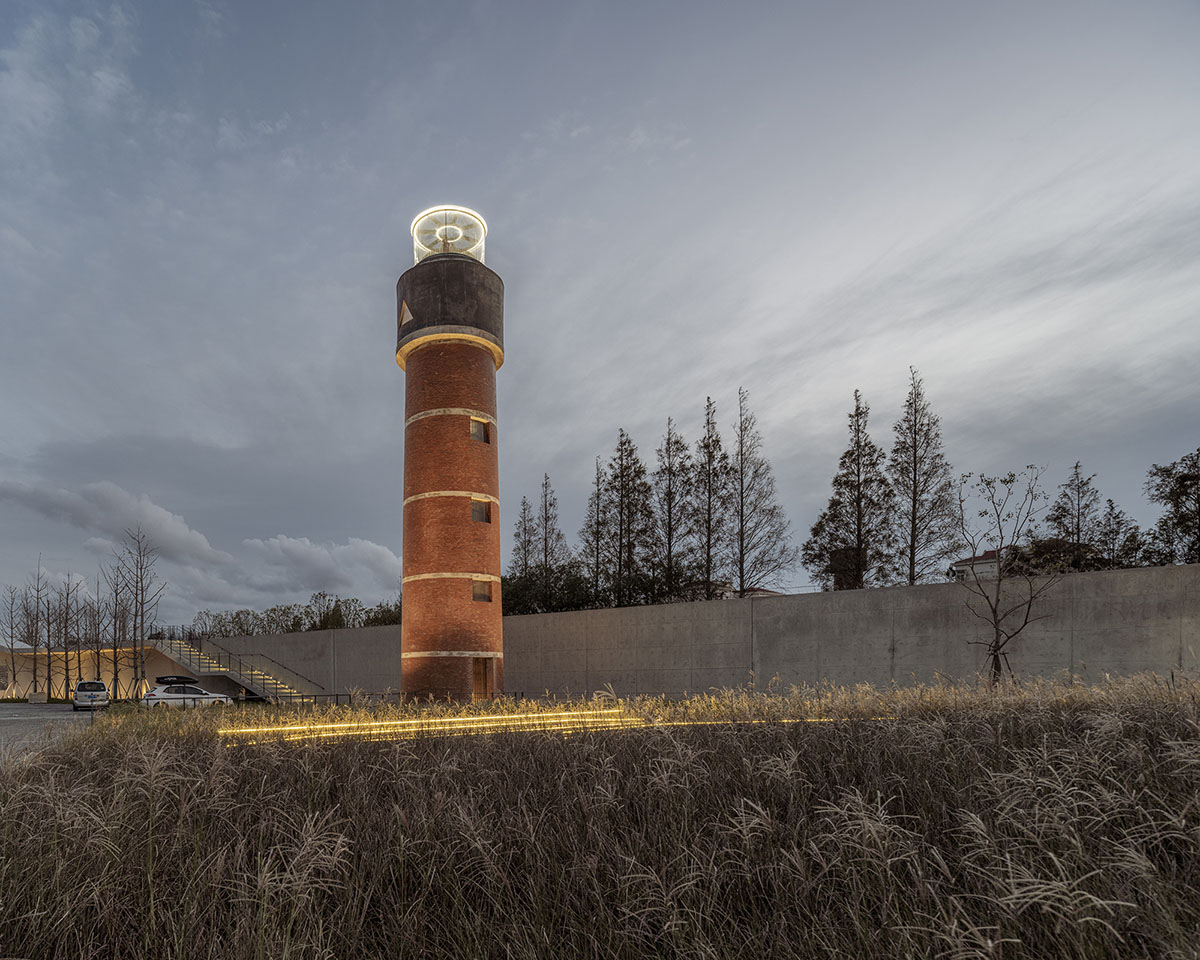 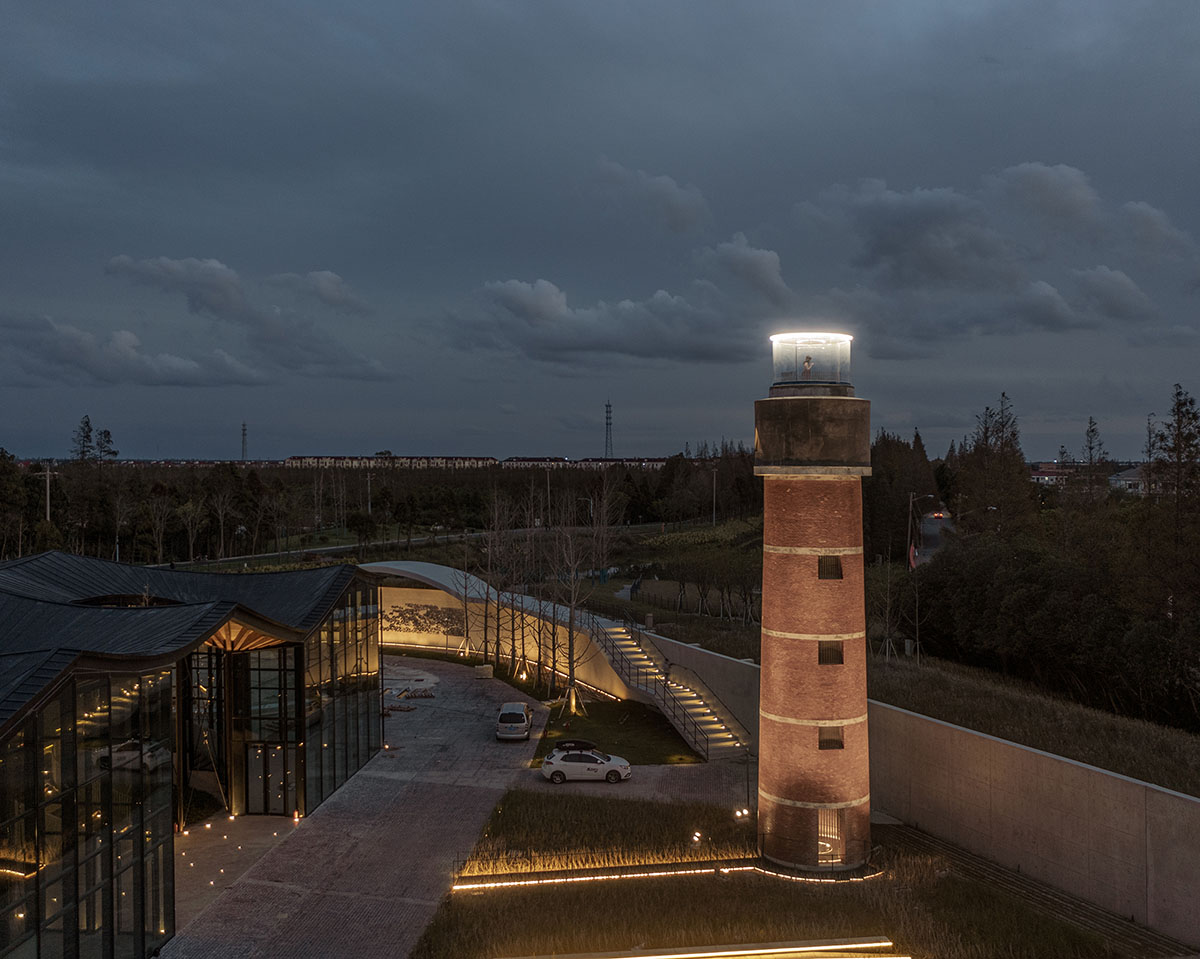 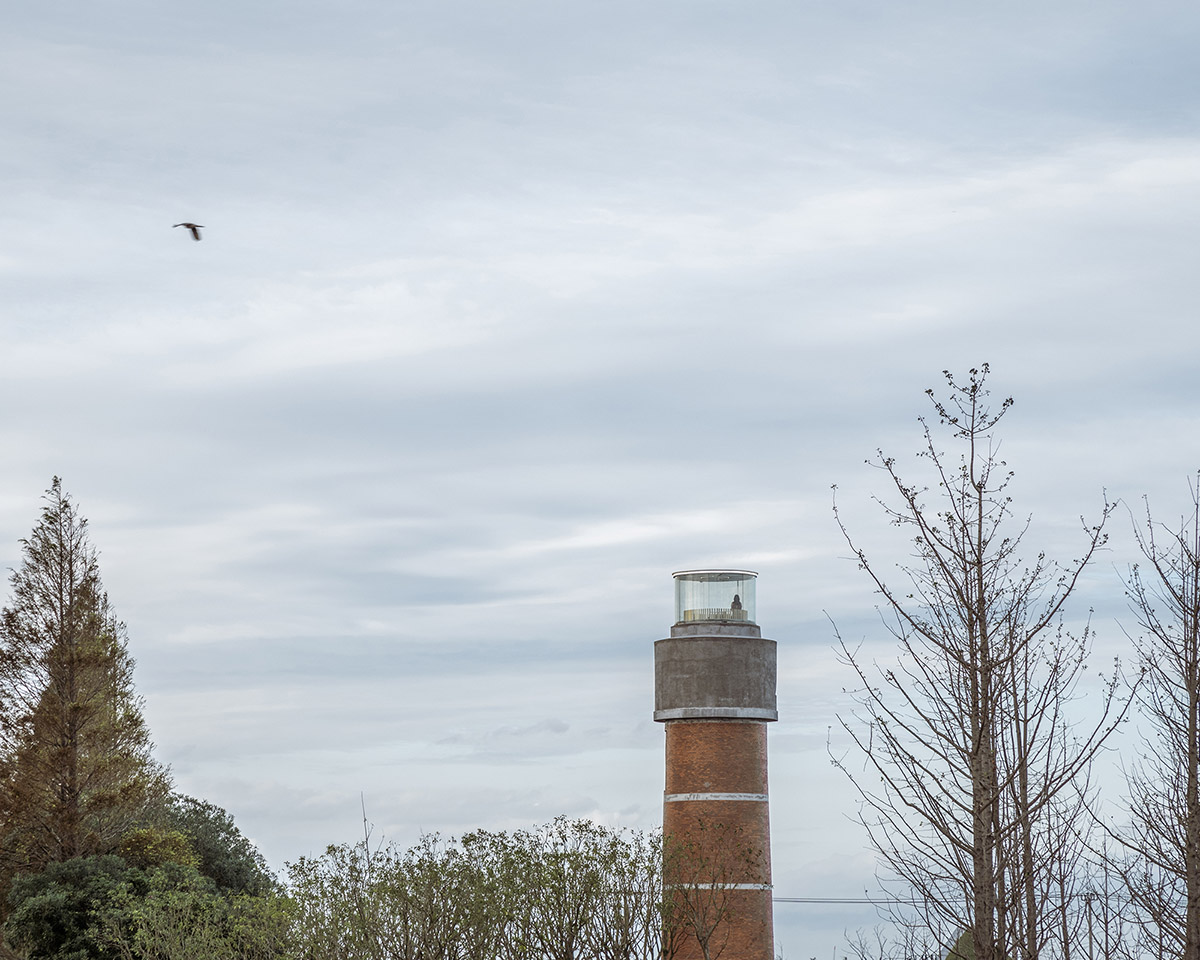 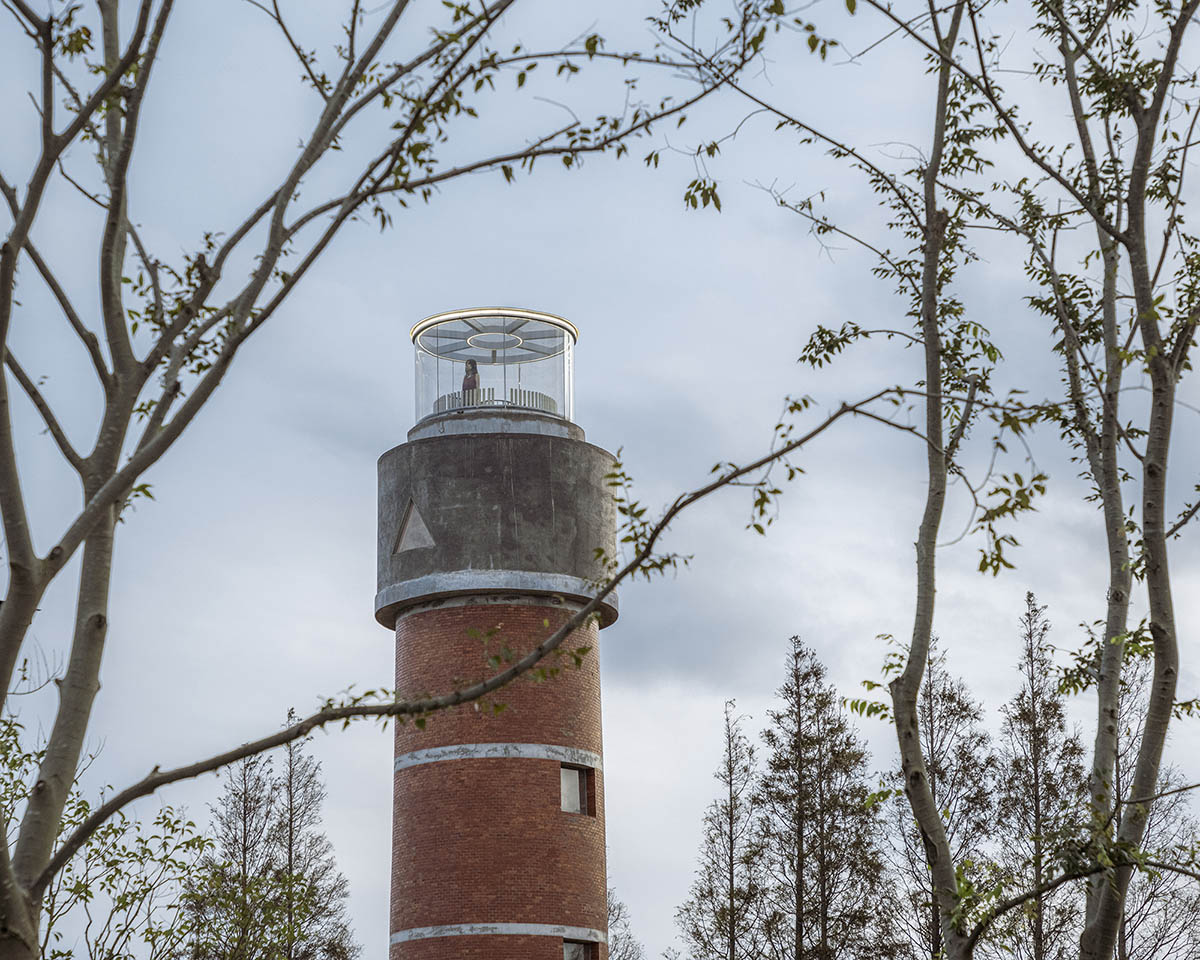 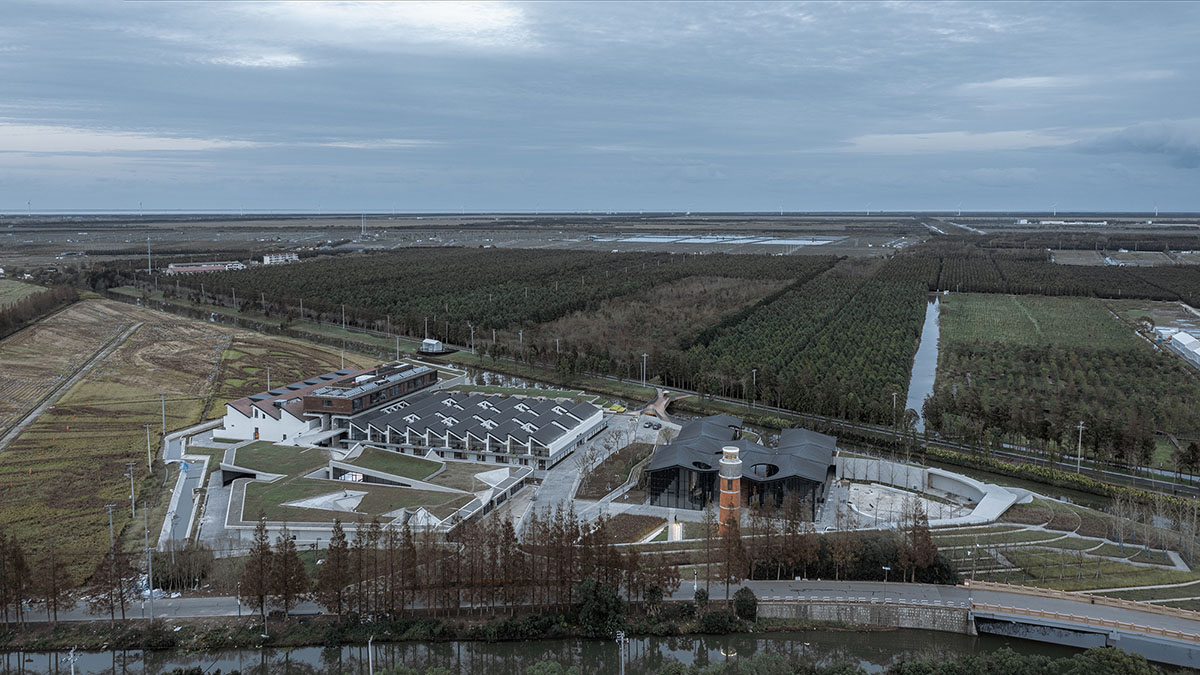 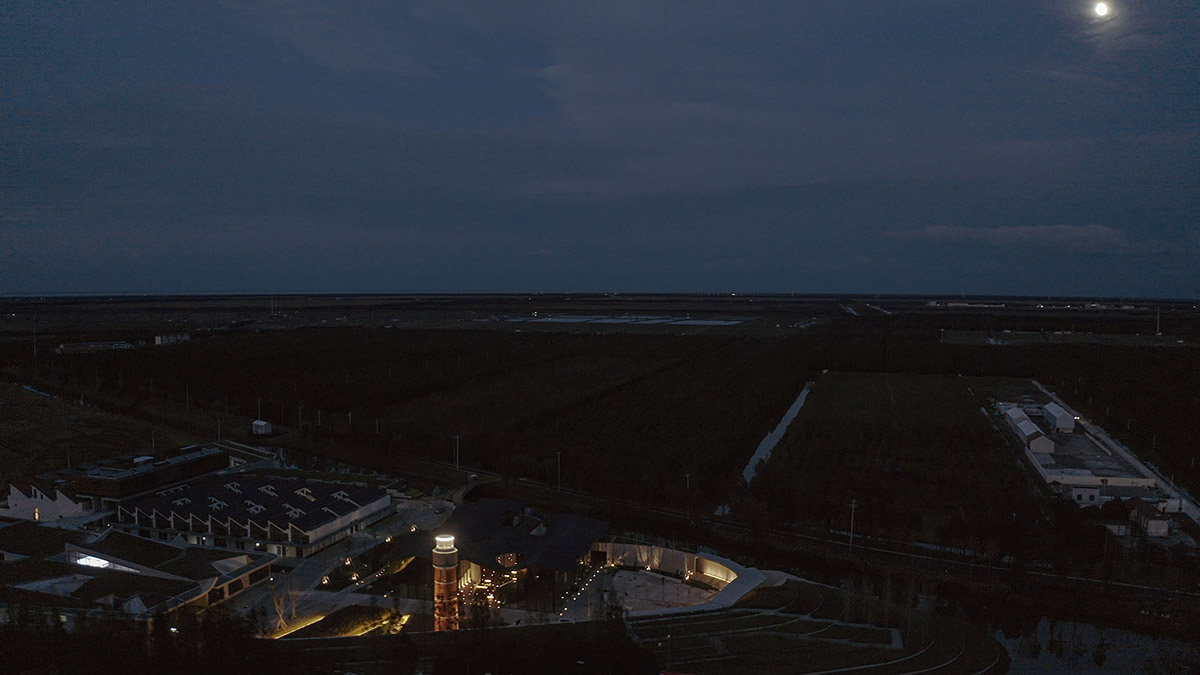 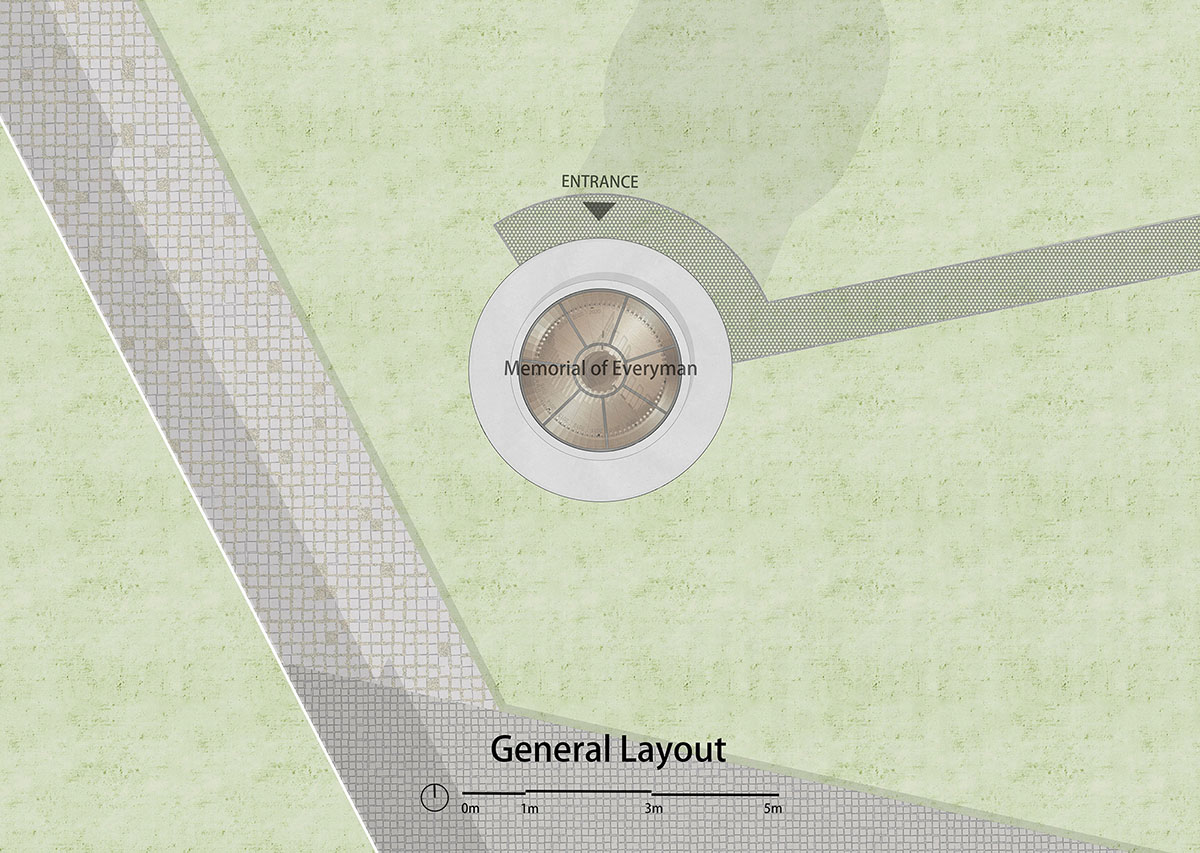 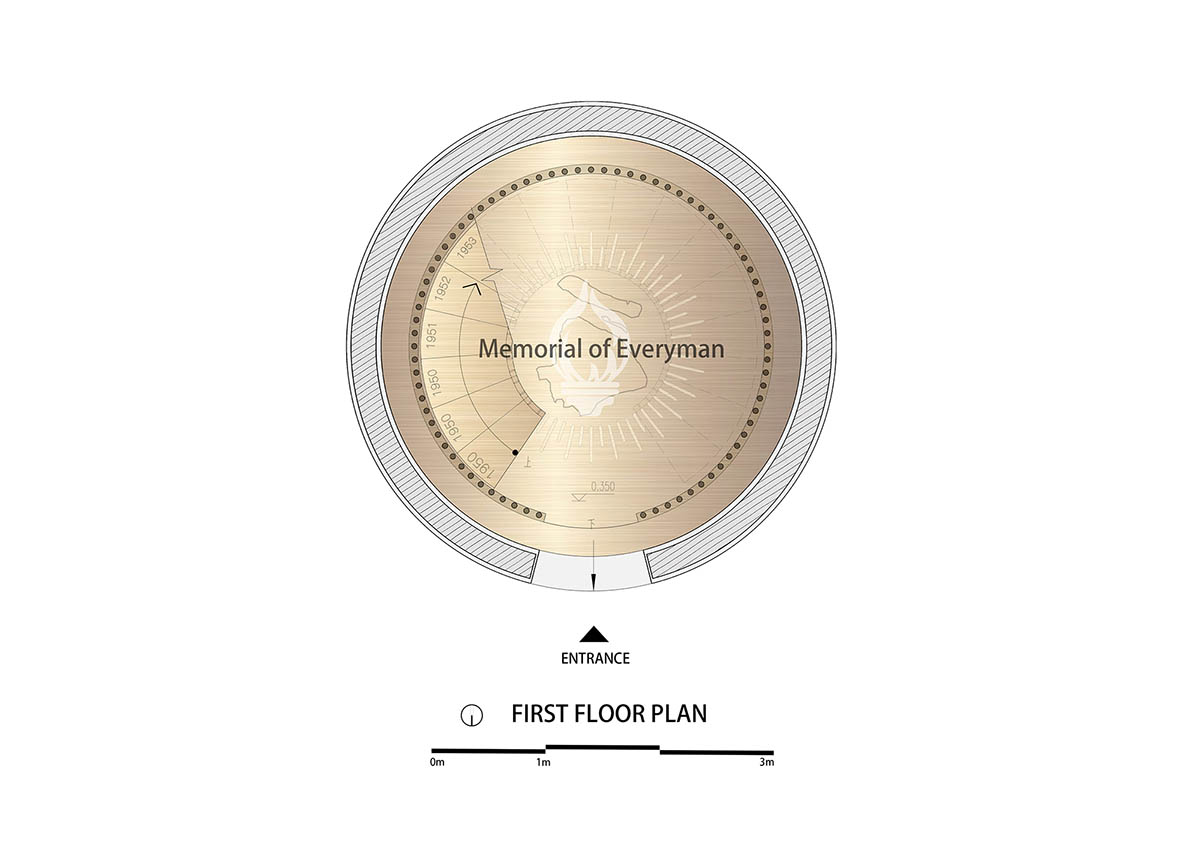 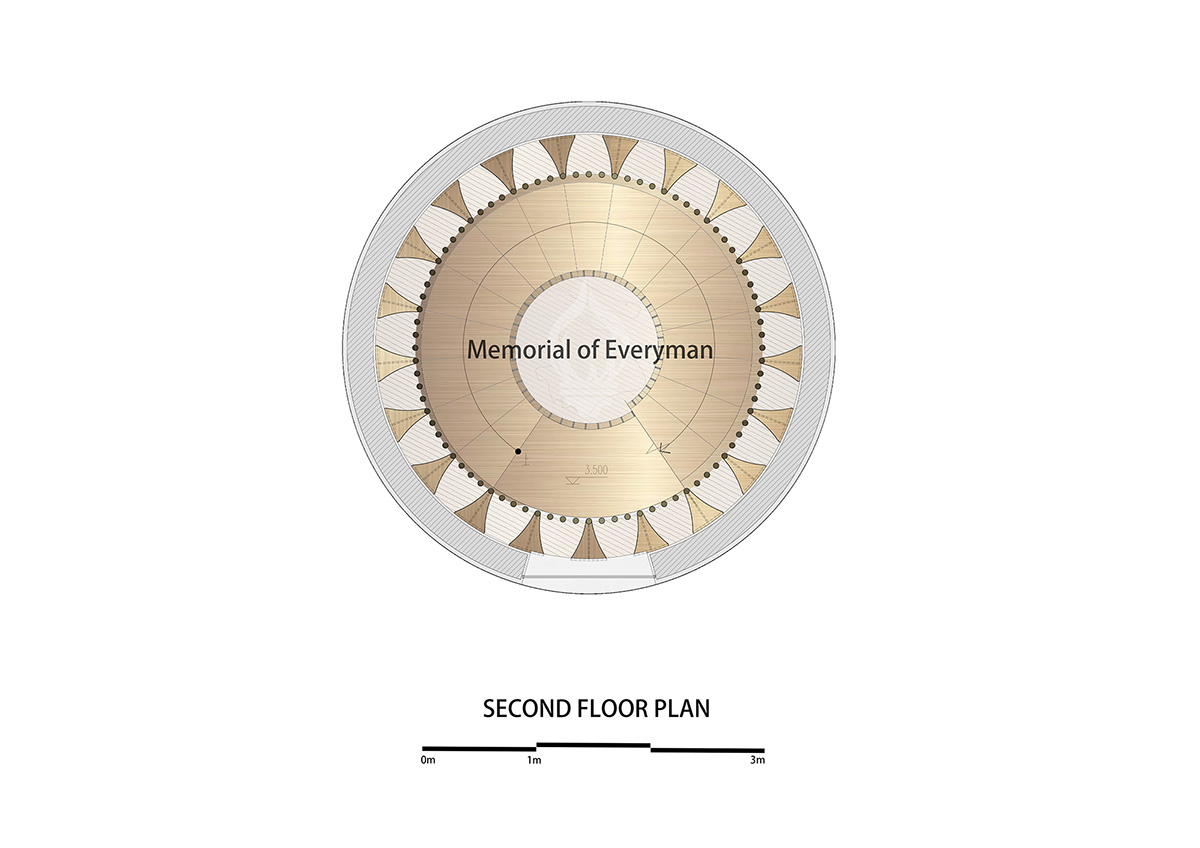 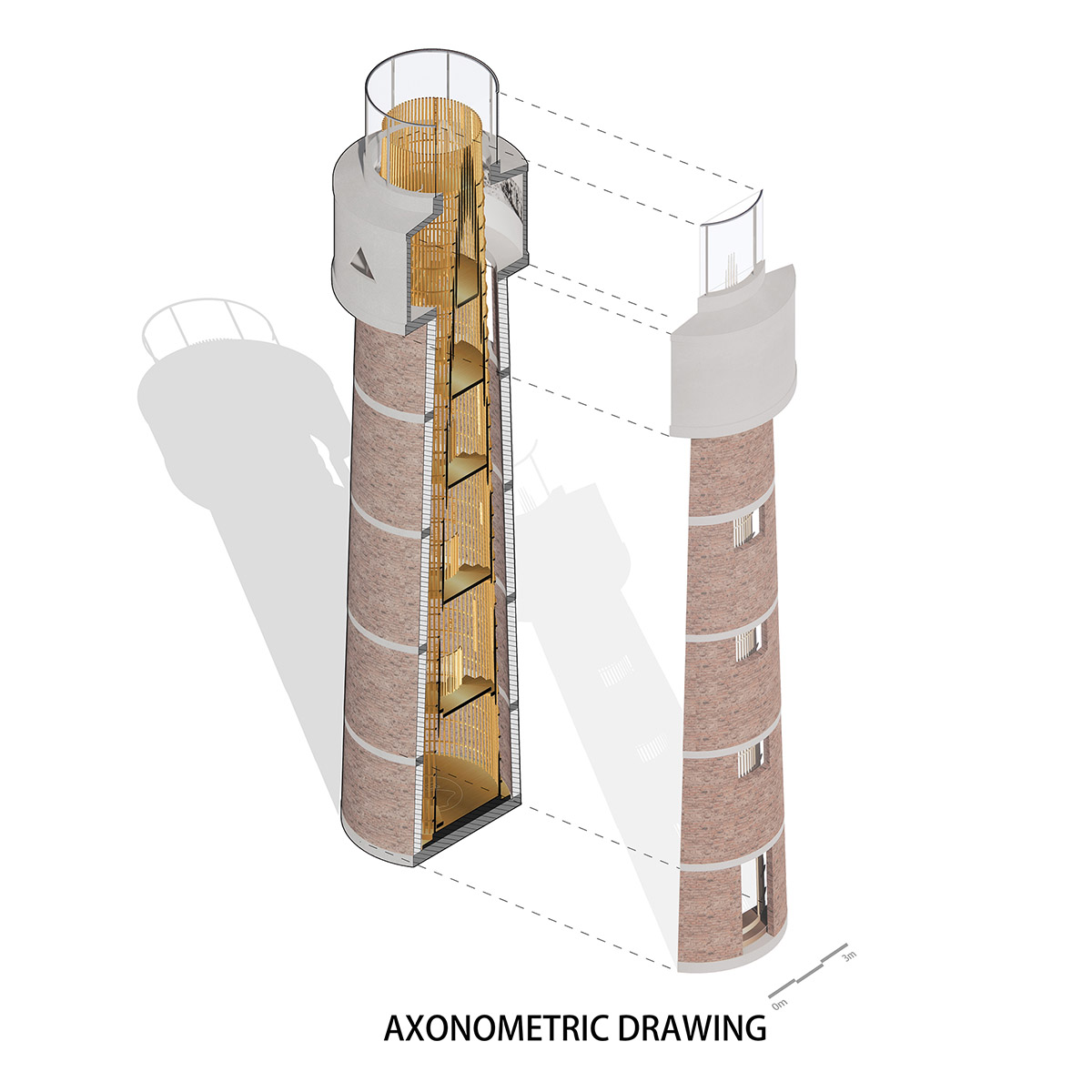 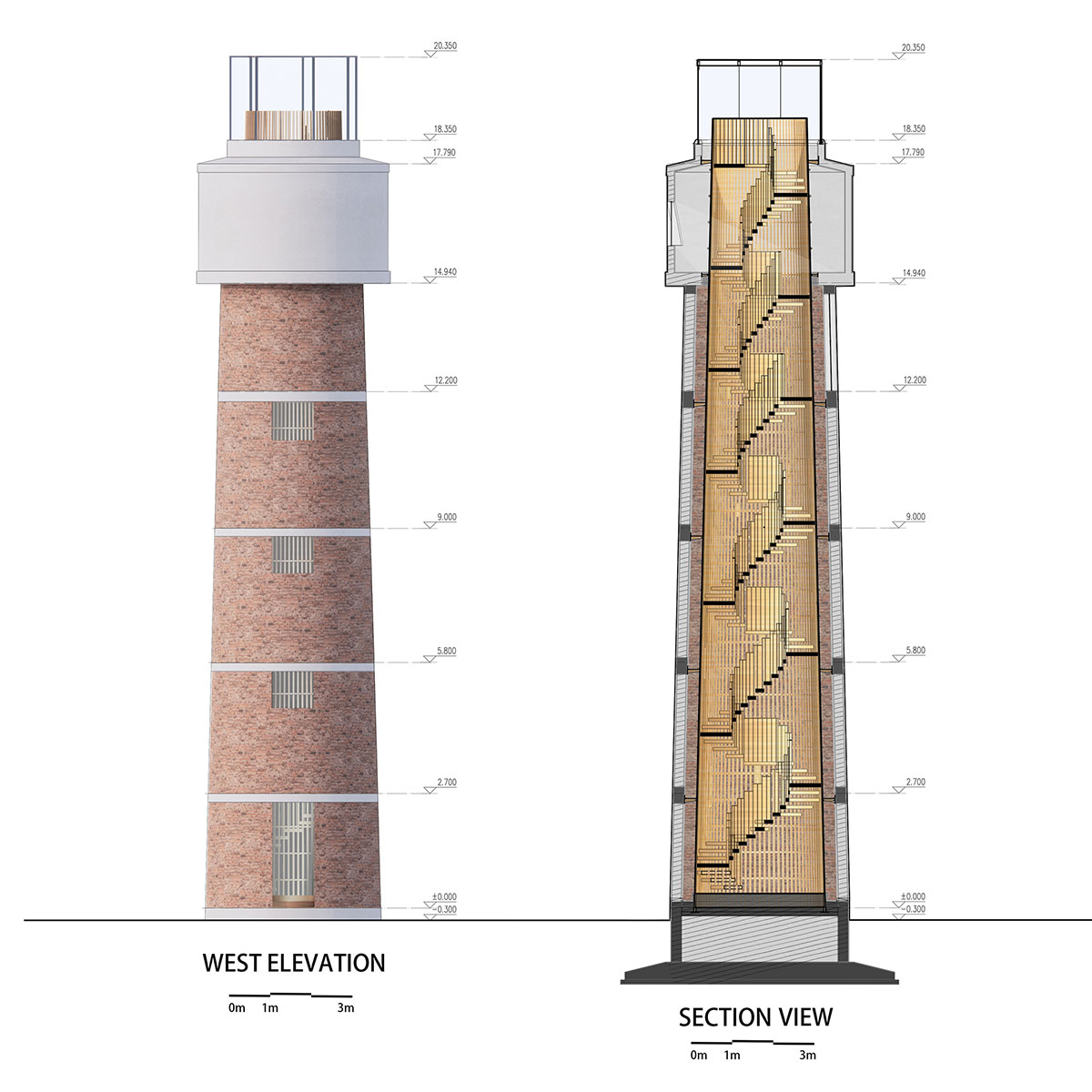 Wutopia Lab previously converted an abandoned pump house into a pavilion in Shanghai. The firm also designed a bookstore with red triangular bookshelves for Tianya Books in China.