An Extensive Look Into "Coding The World" At Pompidou Center 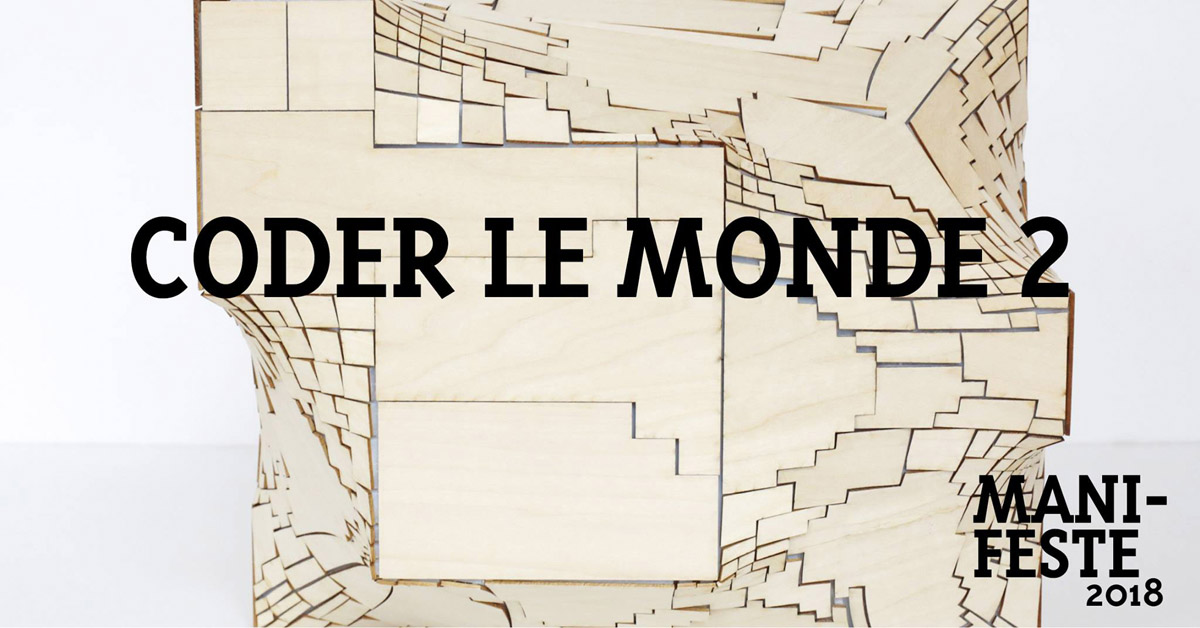 While technologies and coding become one of the hottest topics within artists and architects' world today, it is not hard to find the word "code", "tech", "AI" in your art exhibition leaflets. Artists, musicians, film makers, fashions designers, architects and more, are exploring the unlimited using their ability to code, which is faster, which allows us to analyse and handle complex and mass information. But what does it means for us?

As part of "Mutations/Créations", the new exhibition "Coder le monde" from June till August 27 at the Pompidou Center in Paris presented six timelines on different art and creative disciplines in order to provide an overall interpretation of what makes a digital culture. Mutations/Créations is a series of exhibitions and events dedicated to the innovations and new technologies of different creative disciplines, like the exhibitions Imprimer le monde and Ross Lovegrove's solo exhibition at the Pompidou Center last year. 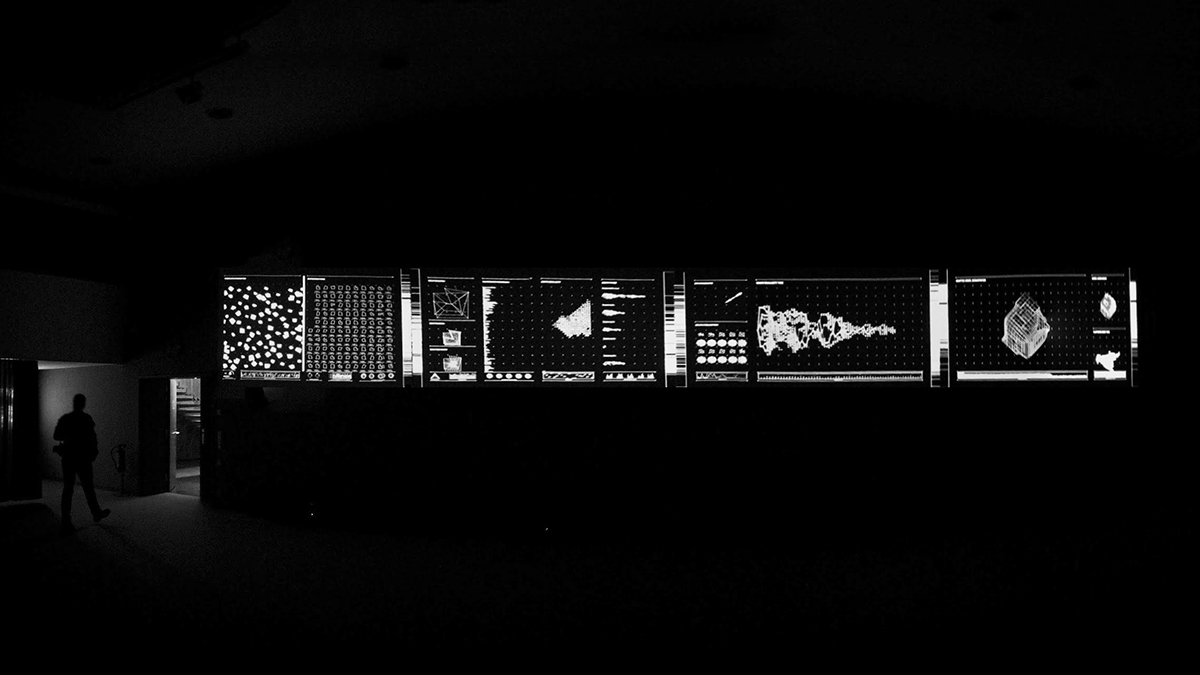 Looking back at the history of the digital code and the way artists have used it since the computer appeared in the 1960s, the exhibition reveals a shared aesthetic and critical world that questions our daily lives, now entirely dependent on digital logic. Six chronologies on the historical development of information technologies are shown in the exhibition, which include "Number, codes and programs", "The Algorists", "Text, code, literature", "Music", "Architecture - Design", "Body and code"; the curator aims to not only highlight the upsurge of digital technology within these disciplines, but also to unlock new possibilities of interaction between these fields. The Pilot ACE demonstration in 1950, one of the first practical designs by Alan Turing for a stored-program computer. Image © Science Museum London

The exhibition, which comprises of lots of panels, was packed with information. These include names and works of artists and designers; scientific developments, technical and philosophical terms; development of programs and softwares. Nothing too precise nor critical, there were lots of big names in different disciplines shown up on the timeline without precise comments from the curator why these people or work are chosen. Here are some of our elaborations and highlights from the exhibition:

Mohr, Manfred and Vera Molnár: How to draw with computers Manfred Mohr is one of the pioneers in digital art, and earliest people who used computers to draw. Lots of his works were presented in an exhibition with Eric Vernhes, called "Beyond the lines" in Galerie Charlot last year in Paris. His works are highly influenced by music rhythms and repetitions. Most of his works search for this random rhythm and pattern from the understanding of using computer (CDC 6400 computer with with a Benson 1284 flatbed plotter) as a tool to create graphics in the year 1969. His works are important milestones on understanding mathematical logics and musical rhythms (which are mathematical as well), and to represent them using computer. 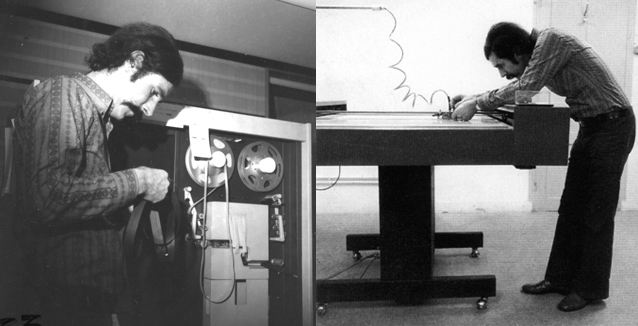 From 1970 to 1983, Mohr was granted access to the Institute of Meteorology in Paris to use the machines at night. He had to learn the Fortran IV programming language in order to create compositions. Image © Manfred Mohr 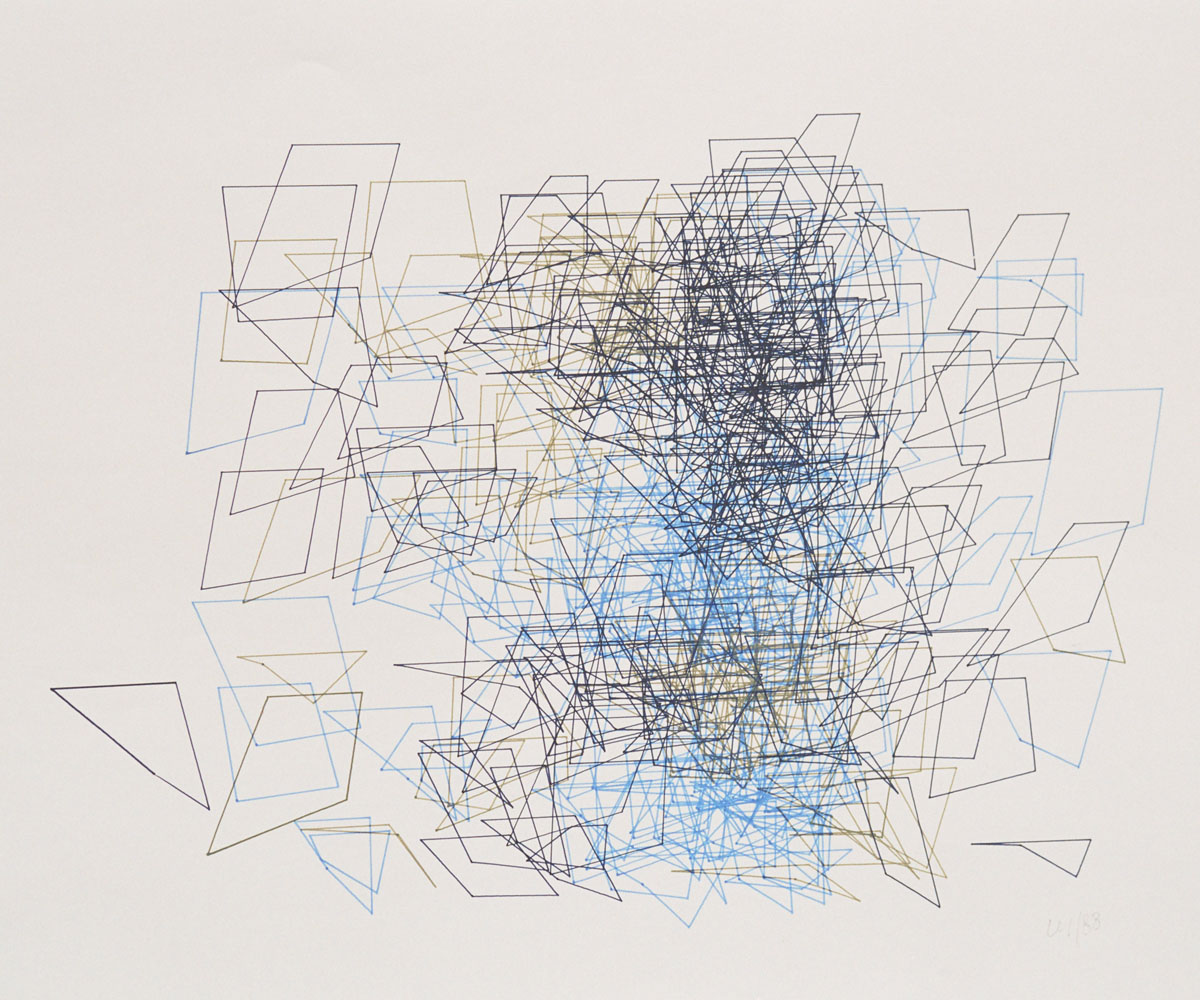 Another artist and pioneer within the same period Vera Molnár is also presented in the exhibition. Her works are particularly important because she started to investigate into computer logics by drawing before the use of computer. A series of systematic steps like the inputs and the outputs of the computer are translated into her hand-drawings. Her works were presented in the exhibition Thinking Machines: Art and Design in the Computer Age, 1959–1989 in MOMA last year. The article The Artist Who Drew With Computers, Before Computers Were a Thing on Surface Magazine provides an excellent introduction to the Molnár's works.

"What viewers are seeing is the simultaneity of a rigorous process as well as the work itself. Read as transparencies, the process and conceptual meet," had said Sean Anderson and Giampaolo Bianconi, curators of the exhibition "Thinking Machine", MOMA.

Roman Verostko: Chaos out of systems 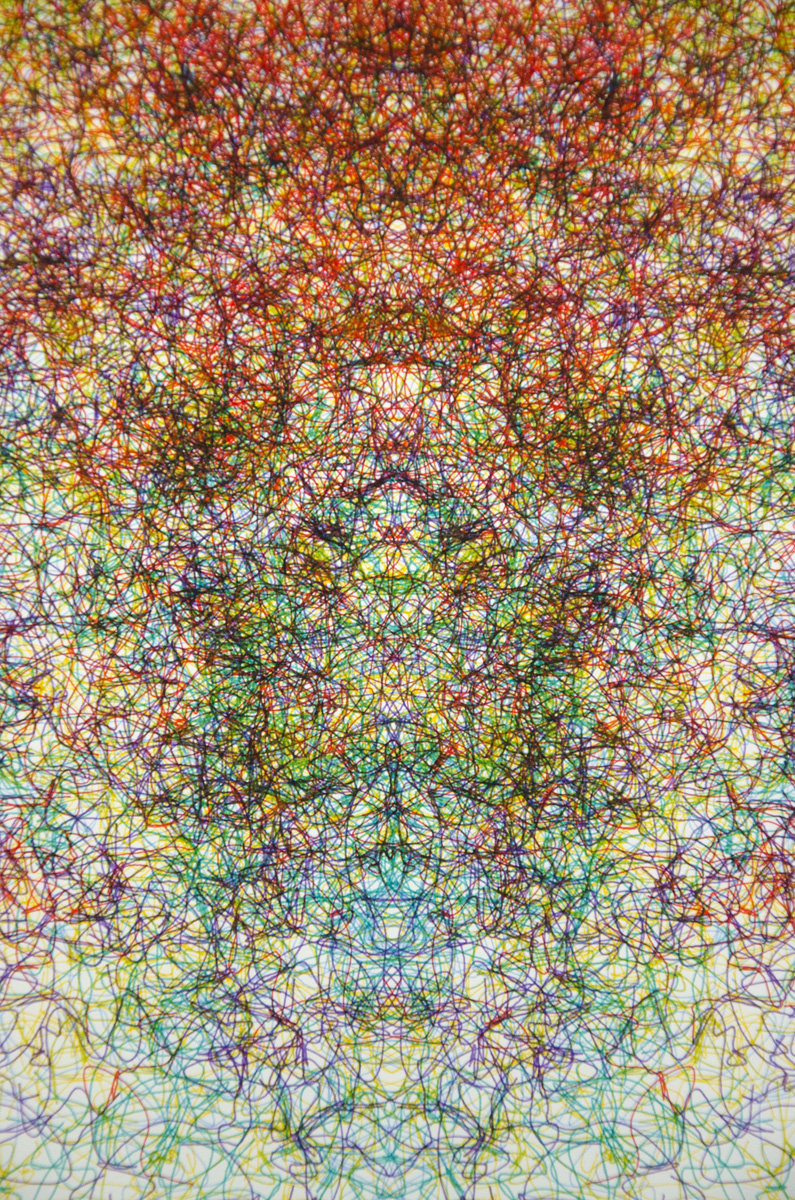 Roman Verostko's works catch our eyes because of his use of programming and machine. His works started from his search of an art of pure form. Being influenced by non-objective artists like Kazimir Malevich and Piet Mondrain. His drawings are the codes themselves. Since 1970, he started coding by using the coding language Fortran, he also started to build pen plotters for his works. Even till nowadays, artists are still exploring pens plotting with code. Artists with similar methodologies like Leonel Moura and can be found in a recent exhibition Artists & Robots in Grand Palais Paris. 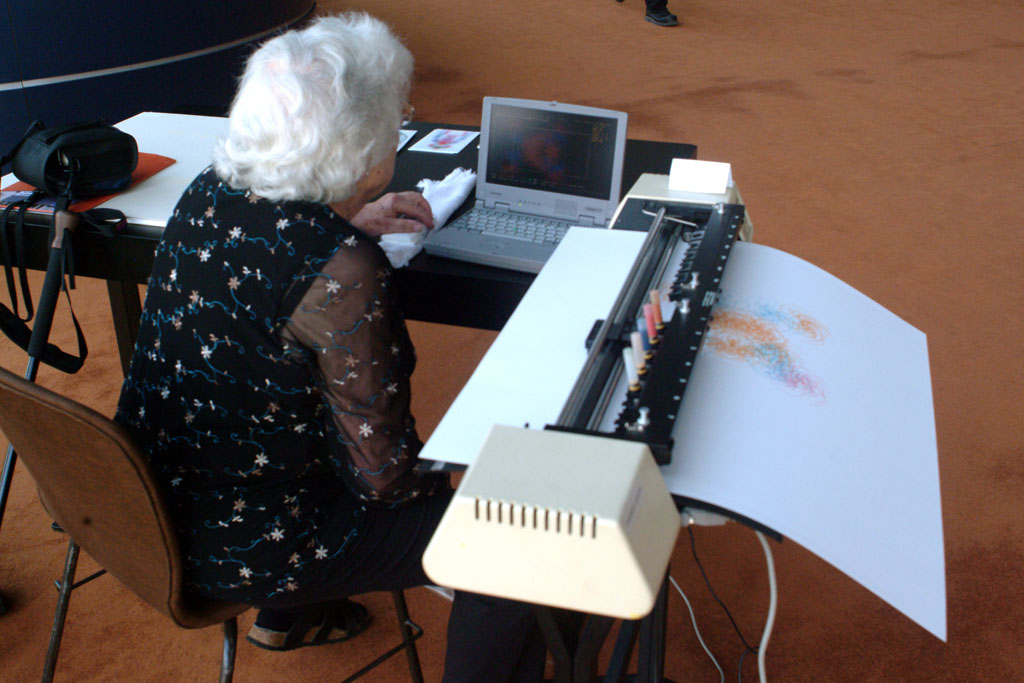 Benoît Carré: Daddy's Car: How to find your style with coding 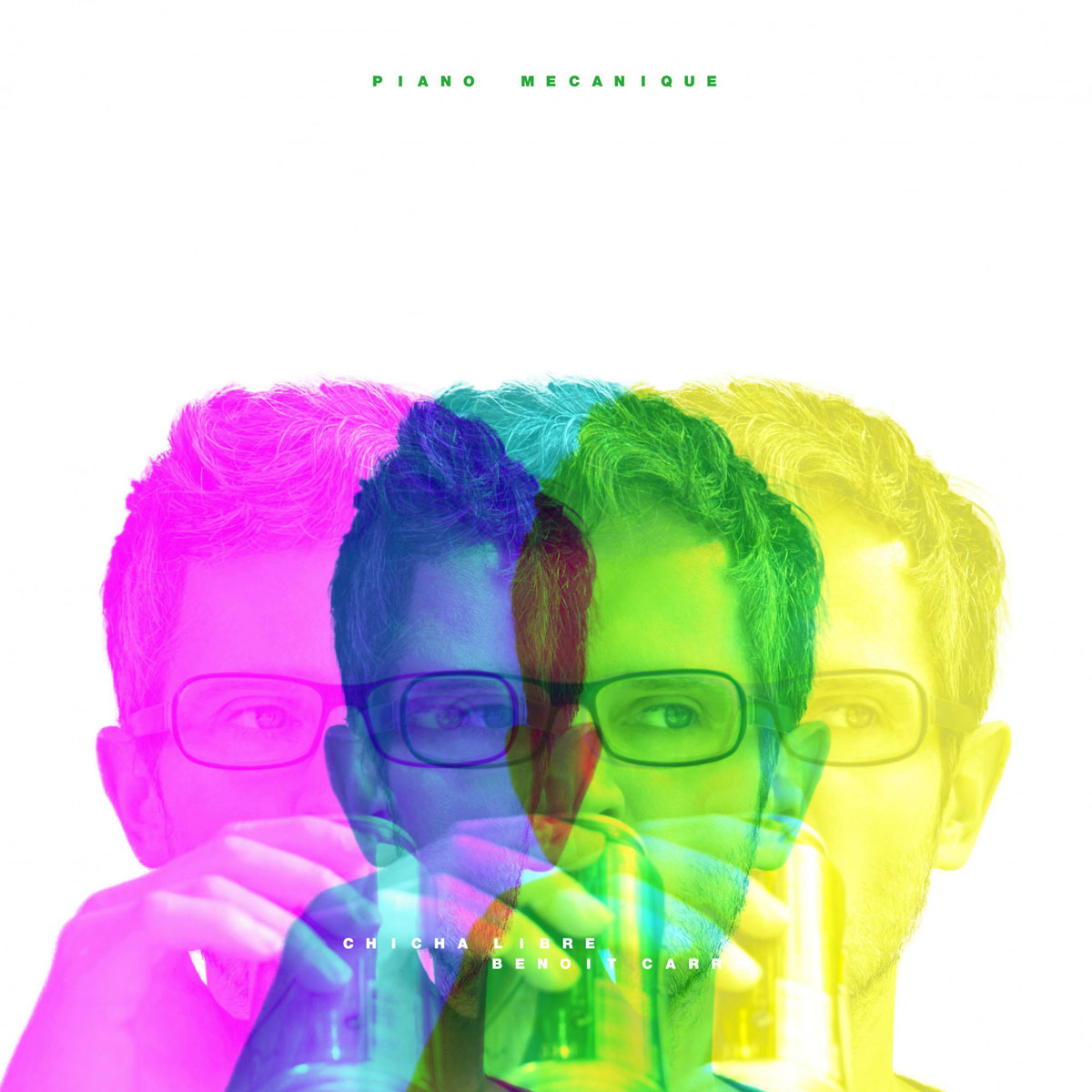 Benoît Carré is a musician and composer who worked on the program Flow Machines for creating artificial intelligence composed music. Flow Machines interested us as architects because it doesn't just generate random musics by AI, but it uses AI to help designers to find their own styles and stay creative. You can learn more about Flow Machines in the video below:

The exhibition does include an extended list of works in different disciplines. Some of the classics are the photography works of Dutch Landscape by Mishka Henner, the lecture from Improvisation Technologies from choreographer William Forsythe, Variation V from John Cage, No stop City of Andrea Branzi. Most of the works selected in the exhibition are projects with a deep relationship on where we are today in computational design but they should have been better illustrated and explained in the exhibition.

The exhibition "Coder le monde" is full of information, like an brief encyclopedia of the history of code in different disciplines. But in this age, do we need any more extra encyclopedias, while we are already flooded with informations everywhere, every second?

After watching and reading an extensive amount of references on six panels, I found the art trends prediction program of Nicholas Maigret particularly refreshing. 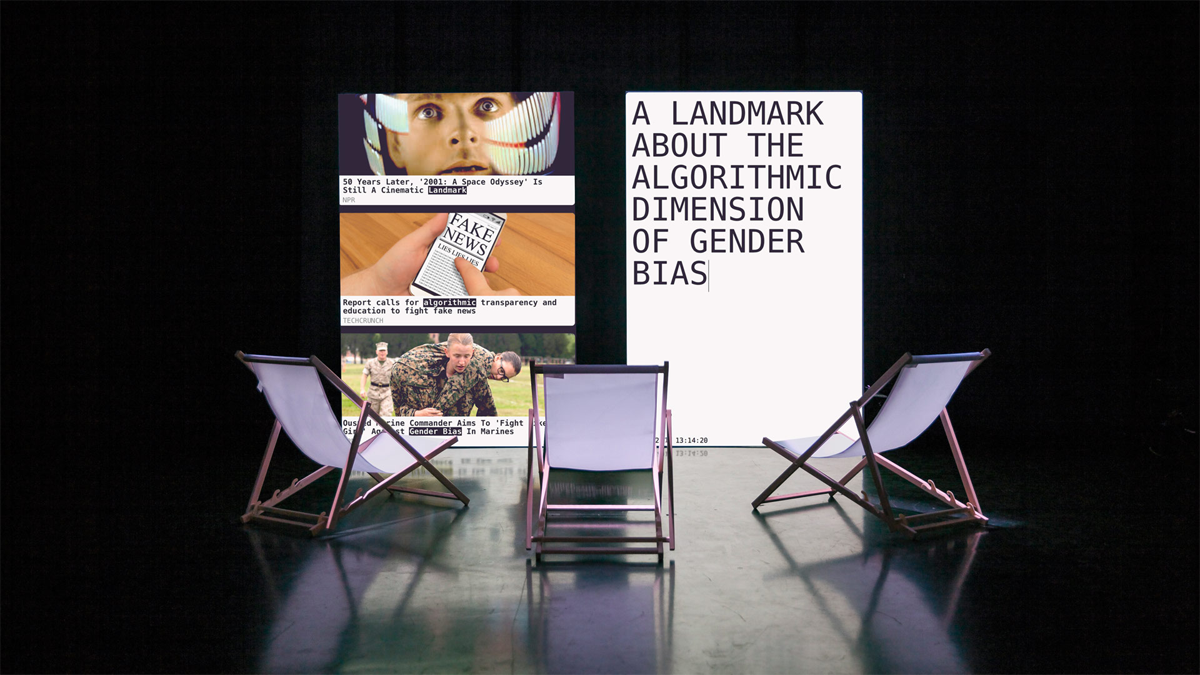 Predictive Art Bot is an algorithm that turns latest media headlines into artistic concepts. Criticizing today's problem on big data and its control. People are grouped by similar behaviors into media chambers, where few massively reposted topics tends to monopolize most of the available attention.

Predictive Art Bot caricatures the predictability of media influenced artistic concepts, by continually monitoring emerging trends among the most influential news sources. Then it identifies and combines keywords to generate concepts of artworks in a fully automated way, ranging from unreasonable to prophetic through absurd.

"Living in the age of unlimited information, coding becomes extremely important as it gives us power to analyze, filter and hopefully understand how to navigate in this endless data ocean. Looking at the phases generated by Predictive Art Bot,  "An augmented startup to investigate undocumented immigrants"; it doesn't just give you a casual laugh, but imaginations and reflections from its absurdity. This AI-generated statement is surprisingly critical, imaginative, and effective on giving a compass for the disoriented audiences in this endless data ocean."

The last note, Francois Roche: the artist who is not presented 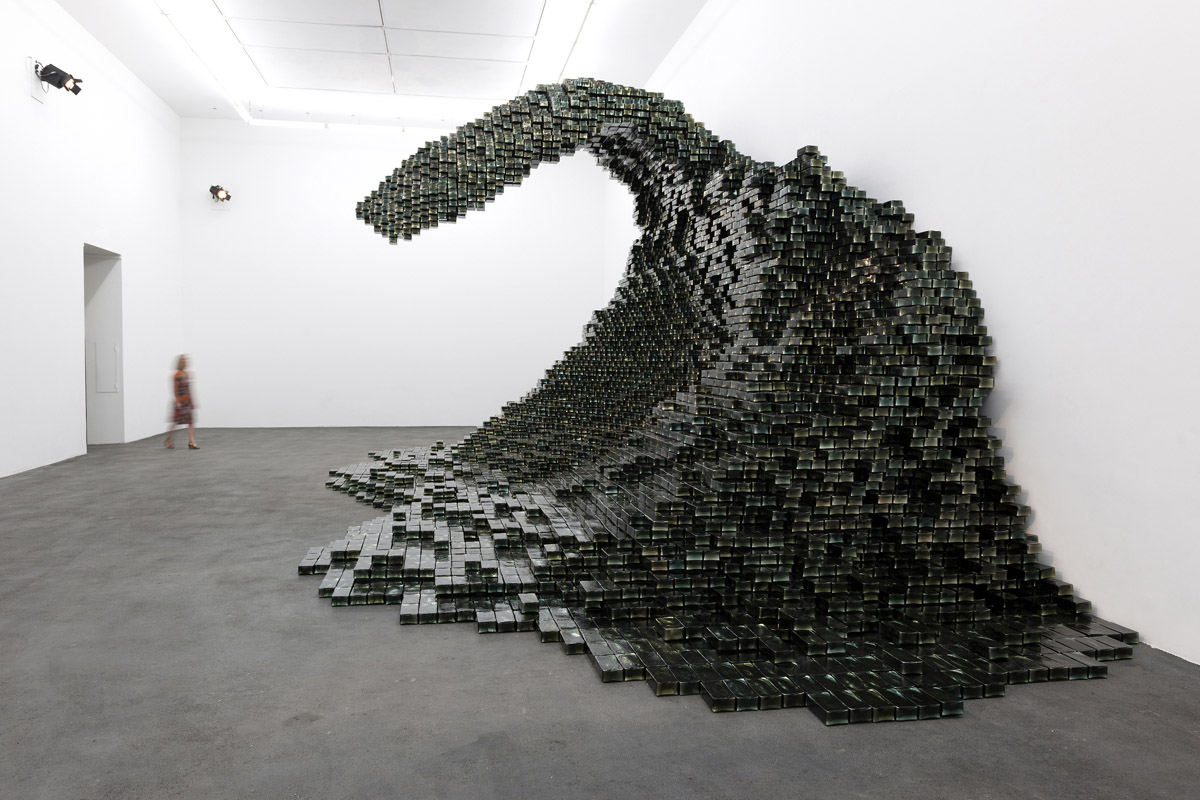 Francois Roche's works were not exhibited in the "Coder le monde", but there is a work in which visually is very similar to his work Olzweg, exhibited in FRAC Center in 2006. The big wave, an installation built out of thousands of glass brick, inspired by the form of wave in the nature, was being accused of plagiarism by Roche. According to Roche's facebook page, this work is a replicate of his work in 2006 and he criticized the exhibition is showings works that are decorative, "oscillate in a pendulum between bio-mimicry and post-plagiarism", said Roche himself.

Indeed it is true that Othoniel's work has very less to do with code. The artist focus on his search between form and material. The work has been exhibited several times and in all the exhibition and artists' statements it is more about his love on finding geometry from his inspiration of nature, and his use of material.

In "The Big Wave", the construction and installation processes are relatively traditional, glass bricks fixed on steel structure and installed by labor, which also made Othoniel innocent from Roche's accusation. Roche's olzweg, although visually similar to "The Big Wave", is fundamentally different from it in terms of its concept, its structure, and relationship between digital design, coding, and robotic fabrication. But undoubtedly Roche's work would have been much more relevant to the exhibition "Coder le monde", which Roche called it "Copy the world", at the same time it is confusing why Othoniel's work is included in the exhibition while it doesn't demonstrate its use of coding and digital design. More information about the date, related events and the ticket of exhibition can be found here.