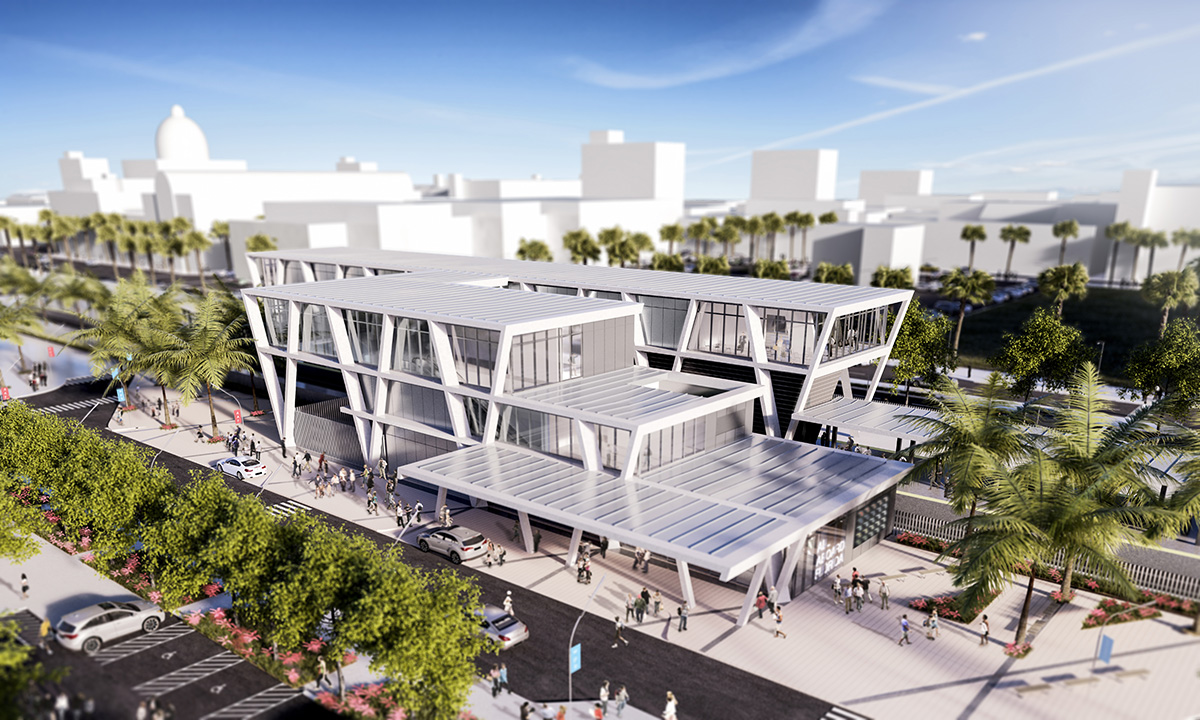 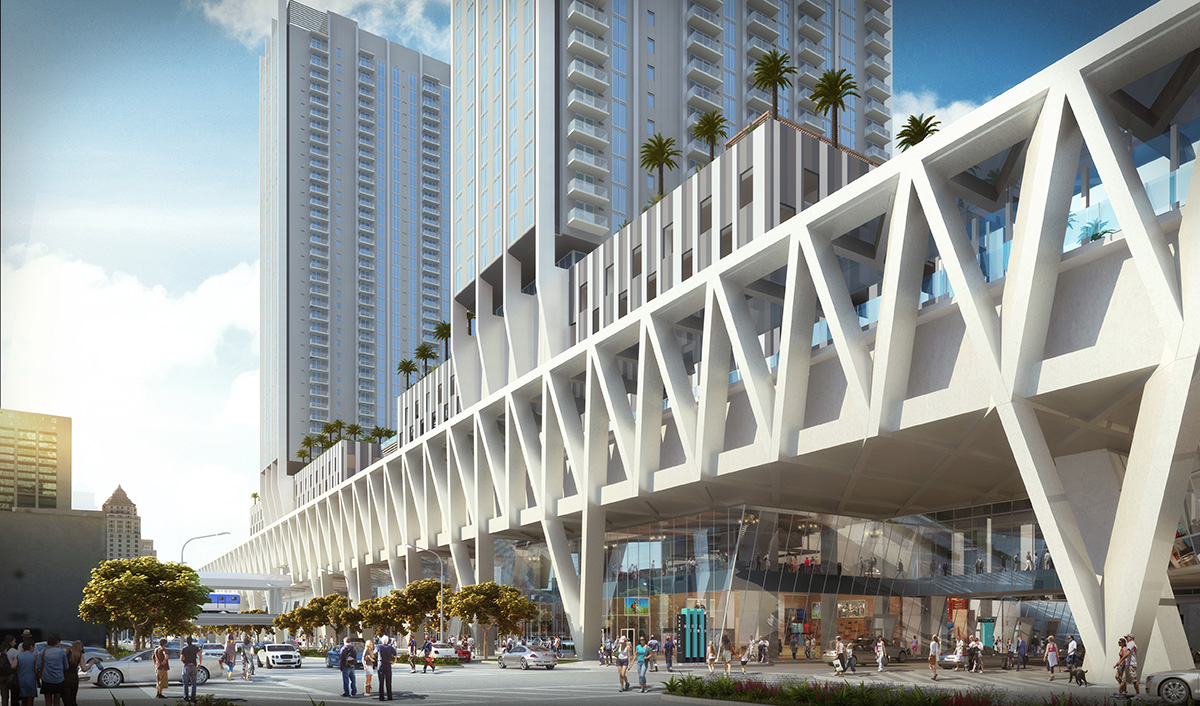 Brightline is the only privately owned, operated, and maintained project of its kind being developed in the United States today. The transformational infrastructure project provides a vital new service for Florida residents, business people, and visitors and eliminates more than three million car trips from the region’s roadways each year. SOM worked with Florida-based Zyscovich Architects as Associate Architect and Planner on the rail line’s three stations.

"Given the large scale of the project, creating a sense of overall unity for the entire transportation network, while conveying a sense of identity for each individual station, was one of SOM’s primary design goals," said SOM.

"The three terminals are envisioned not only as gateways to their respective cities, but also as iconic destinations, and are filled with spaces to shop, eat, and meet. SOM unified the stations’ designs by exposing their structural form—V-shaped bracing—as the main architectural expression, and by bringing in natural light through ample use of glass." 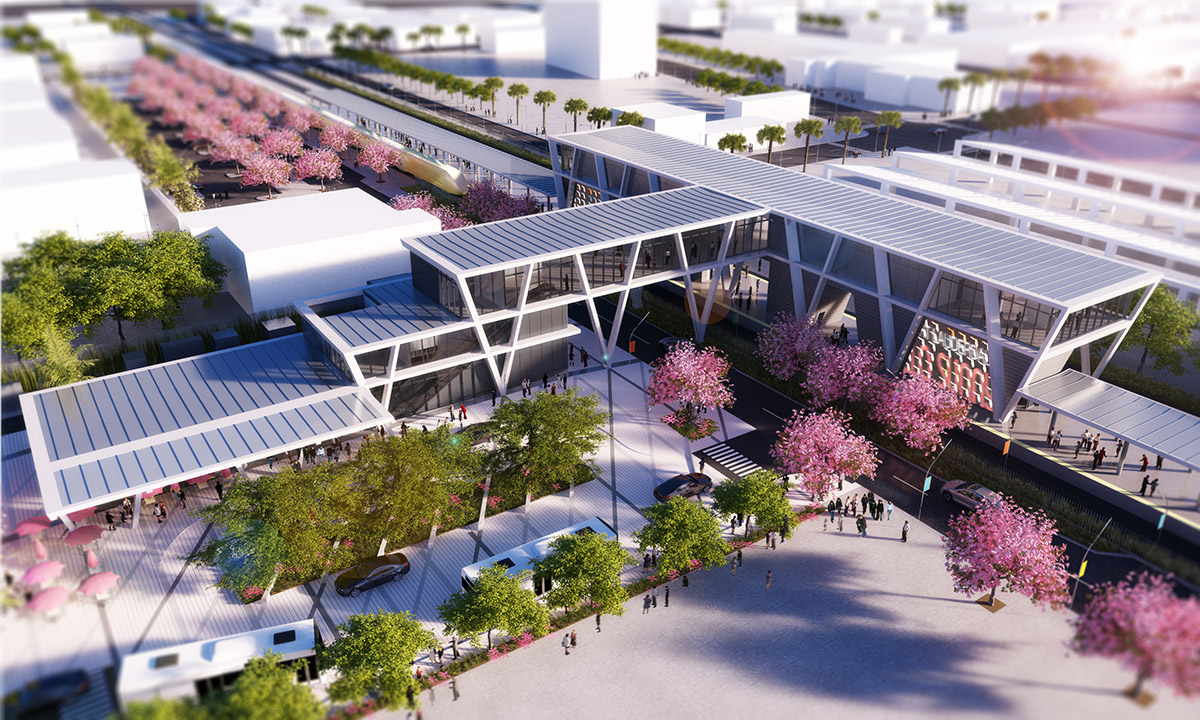 In downtown Miami, SOM converted the site of a former 1920s train station—utilized for decades as a parking lot—into a modern, 21st Century landmark terminal. In response to an extraordinarily challenging and dense site, the station and its platforms have been elevated 50 feet in the air. Retail spaces are vertically layered beneath the soaring tracks, and the steel V-bracing in alternation with glass gives the station a shimmering, lightweight quality. This innovative solution allows thru-streets to remain open to traffic and for valuable streetfront real estate to remain leasable.

"We built the railway above grade to avoid interfering with existing street flow and, if you dig too deep under Miami, you hit the water," said Roger Duffy, Design Partner of the project. 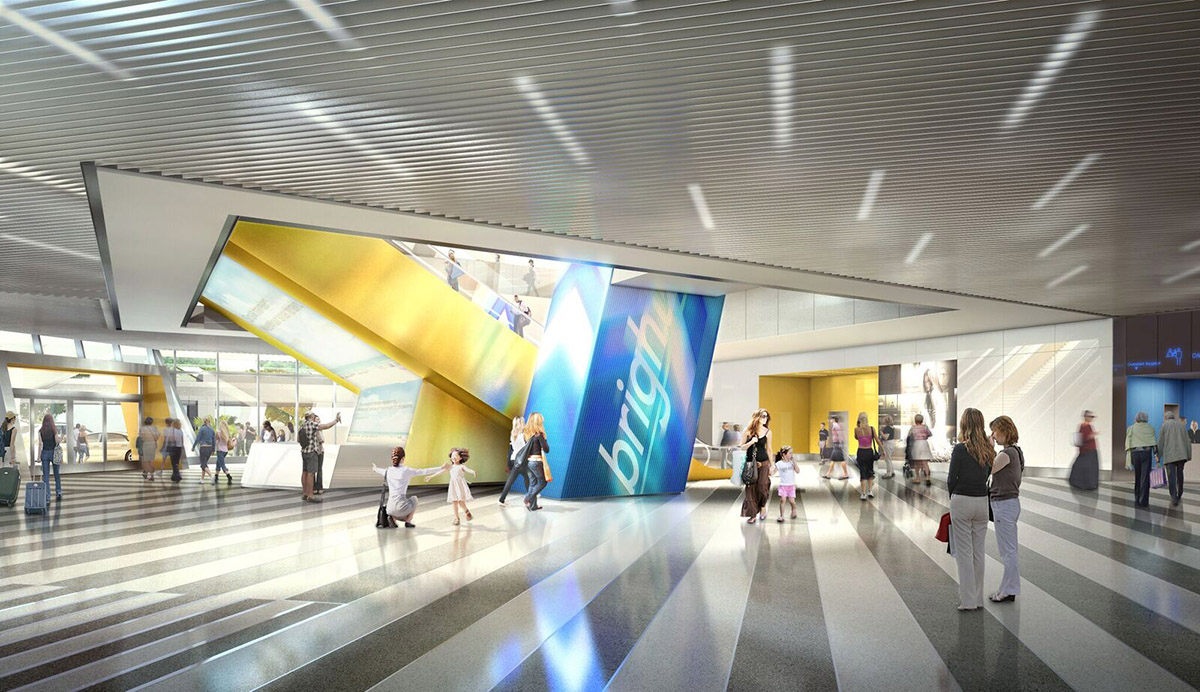 SOM planned and designed a 12-story office building above the Brightline platform called 2 MiamiCentral providing 360-degree views for tenants to the tracks below and the nearby bay. Park-Line MiamiCentral, two residential towers planned by SOM, also rests above Brightline and an expansive, two-level street retail promenade including dining destinations. Elevated parking garages are situated above the rails and lift vehicles by elevator. A pool and green space lie atop the garage and in between the towers.

The Fort Lauderdale station is situated in the northern section of the city’s downtown on 4.8 acres of land. It features a sequence of stacked glass boxes that span across NW 2nd Street. Supported by cast-in-place concrete V-braces, the station rises above surrounding buildings, serving as a powerful urban focal point. The plan for the station itself is open and intuitive. Arriving passengers enter a glazed ticketing lobby at grade level, with dedicated vehicular drop-off and pedestrian links to the city.

Travelers then ascend up an escalator to a bridge over NW 2nd Street, and enter a departures lounge elevated 30 feet above the station platform. Additional banks of escalators take waiting passengers down from the floating lounge, onto the shaded platform, and into their trains. The use of glass throughout this sequence of spaces provides a constant visual connection to the city as well as approaching trains. Viewed from a distance, the station’s stacked, dynamic form evokes a feeling of movement. 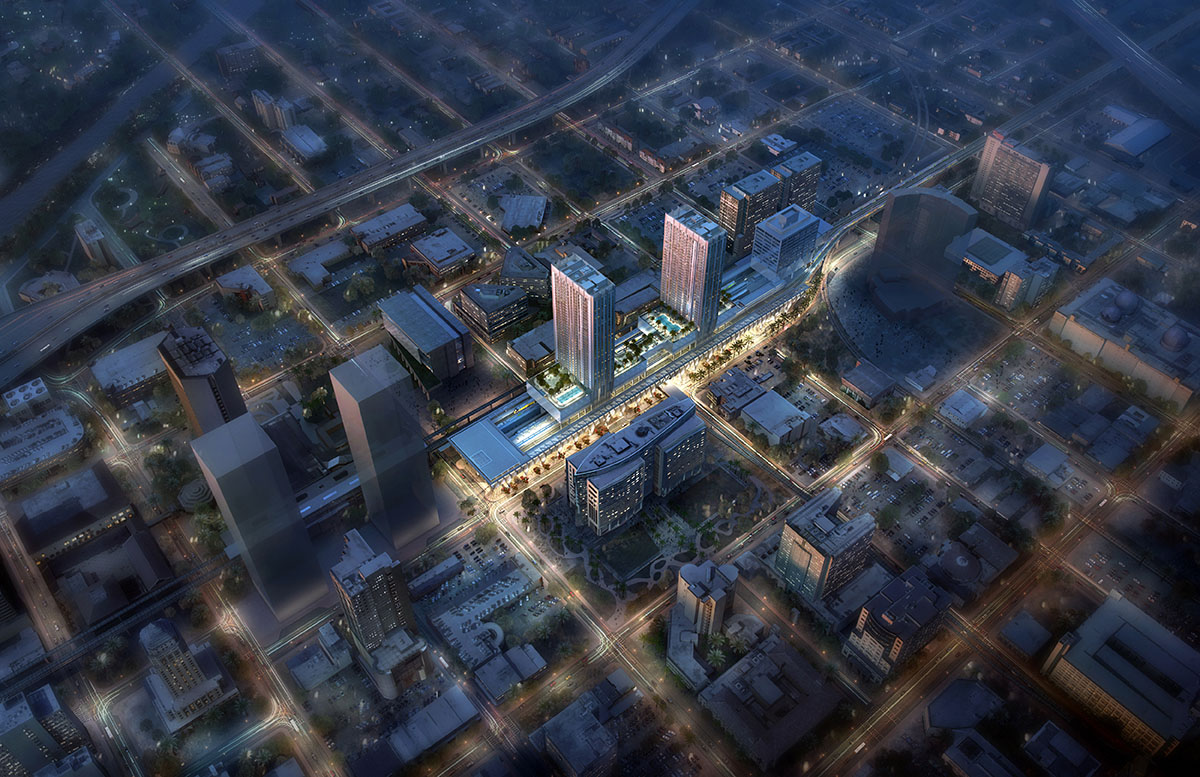 The West Palm Beach station is ideally located between the dynamic government and downtown destination—the city’s main street, Clematis Street—and cultural destinations, such as CityPlace and the Kravis Center for the Performing Arts. The station echoes the materiality of the Fort Lauderdale station with cast-in-place concrete V-braces and stacked concrete and glass volumes. Its shape reflects the overall geometry of MiamiCentral. Arriving passengers approach the station at grade level. The structure is sheathed in a striking glass façade.

Once inside, travelers purchase tickets on the ground floor and proceed to escalators that will rise to an elevated departure lounge, suspended 30 feet above the train platform. Abundant use of glass throughout these spaces animate the building with daylight, assisting in wayfinding and providing a constant visual connection to the surrounding city and landscape. From the elevated lounge, waiting passengers have views up and down the tracks and out to Quadrille Boulevard and the lush setting of native Floridian plants surrounding the station.

As pieces of urban infrastructure, the Miami, Fort Lauderdale, and West Palm Beach stations are positioned to become centers of gravity for significant urban redevelopment. Economists estimated that Brightline will attract more than $6 billion in investments for the Florida economy by 2022, according to a study completed by The Washington Economics Group.

"Part of the goal of this project was to create new districts in these cities," SOM Director Olin McKenzie said. "They weren’t just architectural projects. We sought to make a larger impact on their urban environments."

All images © Designed by SOM in association with Zyscovich Architects. Image © Smilodon CG.