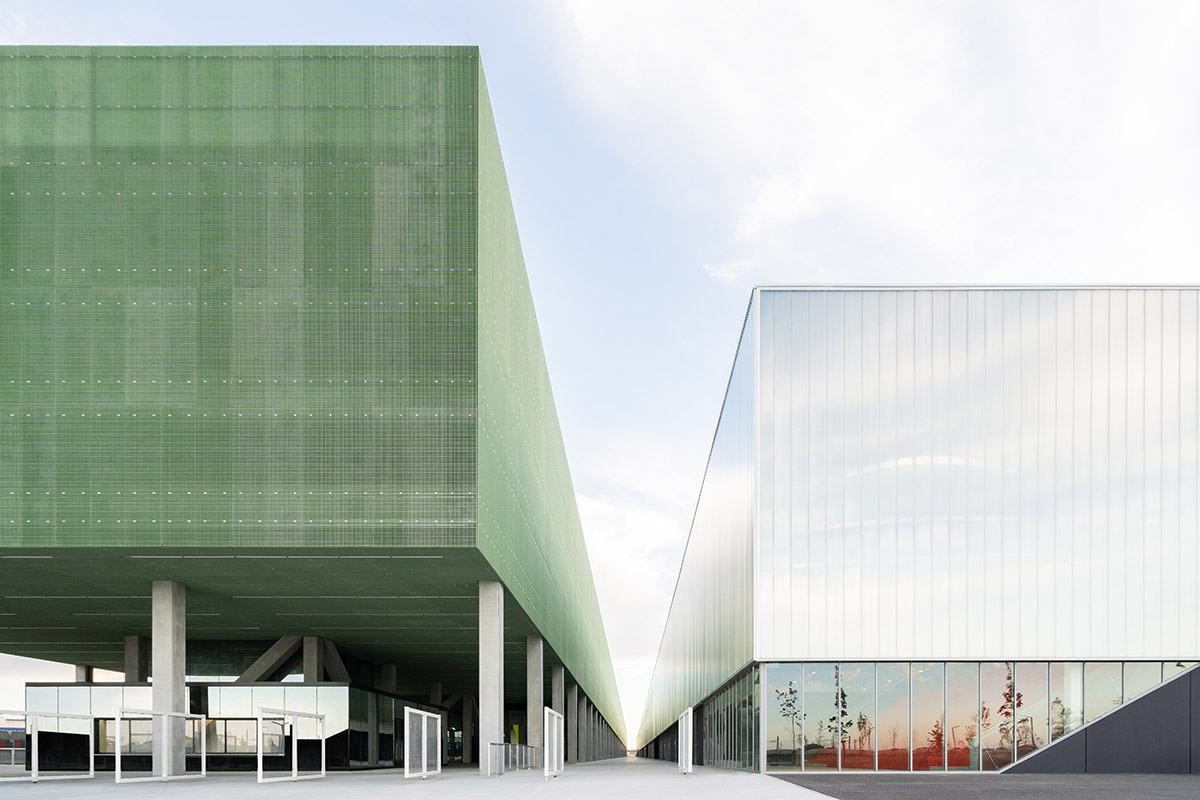 OMA with has completed the MEETT Exhibition and Convention Centre, which has officially been opened to the public in Toulouse, France outside of Paris.

Led by Chris van Duijn, OMA Partner at OMA and Director of OMA projects in Asia, the 155,000-square-metre project incorporates exhibition halls, a convention centre, a multi-function event hall, a car park silo for 3,000 cars and a transportation hub with a new tram station.

OMA conceived the masterplan of MEETT as an active strip - "une bande active" - forming a physical border between urban development and countryside, with the ambition of becoming the central spine for an integrated development of the city and the countryside. 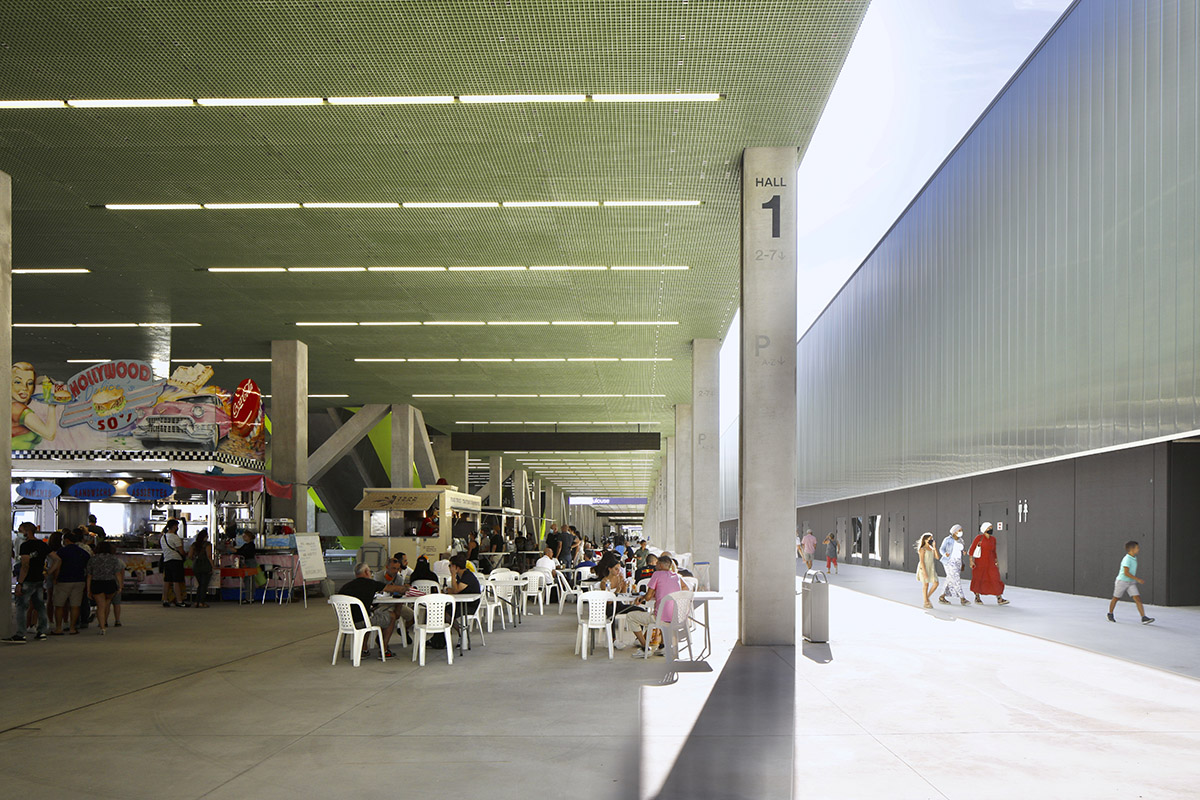 Outdoor public spaces, which will become accessible not only for convention visitors but also for the general public, are woven in between the three expo buildings, creating a connection between the centre and the surrounding landscape.

The urban context as well as the program of MEETT require the project to function as a logistical machine. 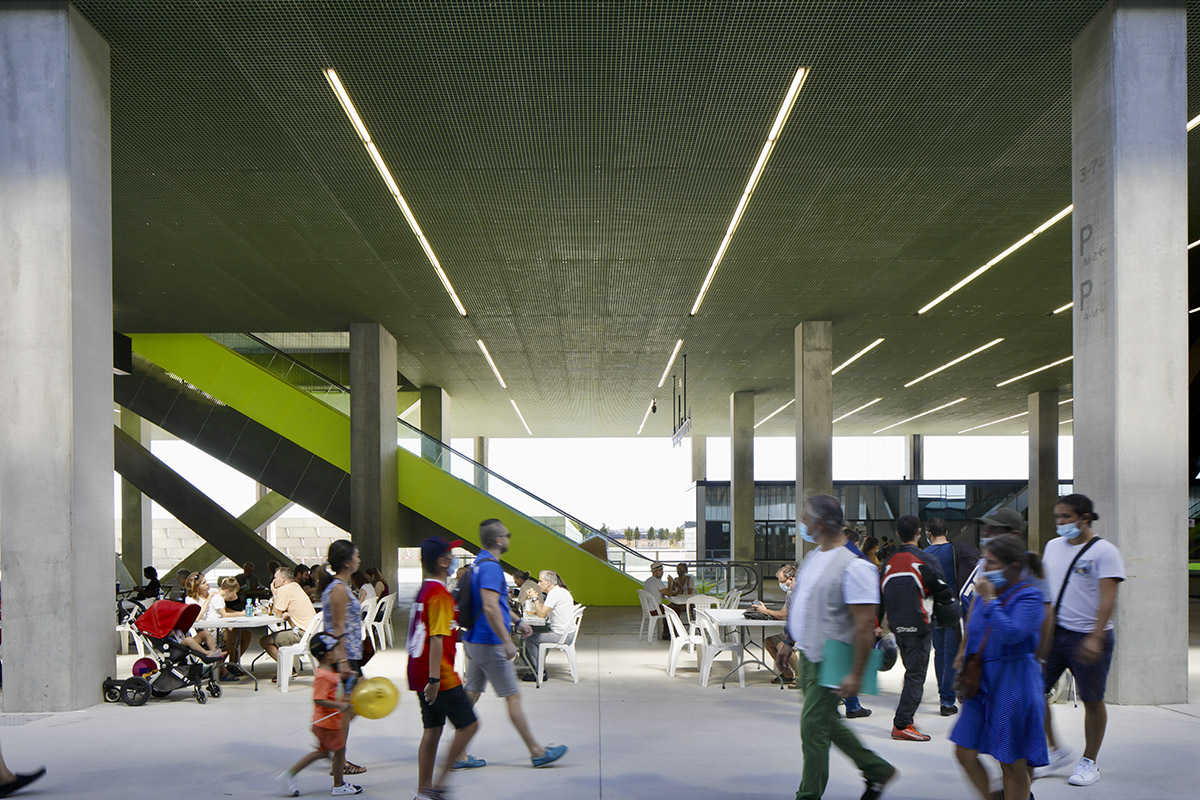 "MEETT is not an architectural intervention, but an urban machine. Both monumental in its scale and subtle in its overall impact, it will be a new gateway to Toulouse," stated in OMA's project description.

"This project was an opportunity to develop an architectural design which relates to all scales," said OMA Partner, Chris van Duijn.

"The masterplan is inspired by the efficiency of the surrounding infrastructure, the openness and horizontality of the rural occitanic landscape and the scale of the adjacent hangars, while each of the individual buildings is designed as a unique functional and flexible machine." 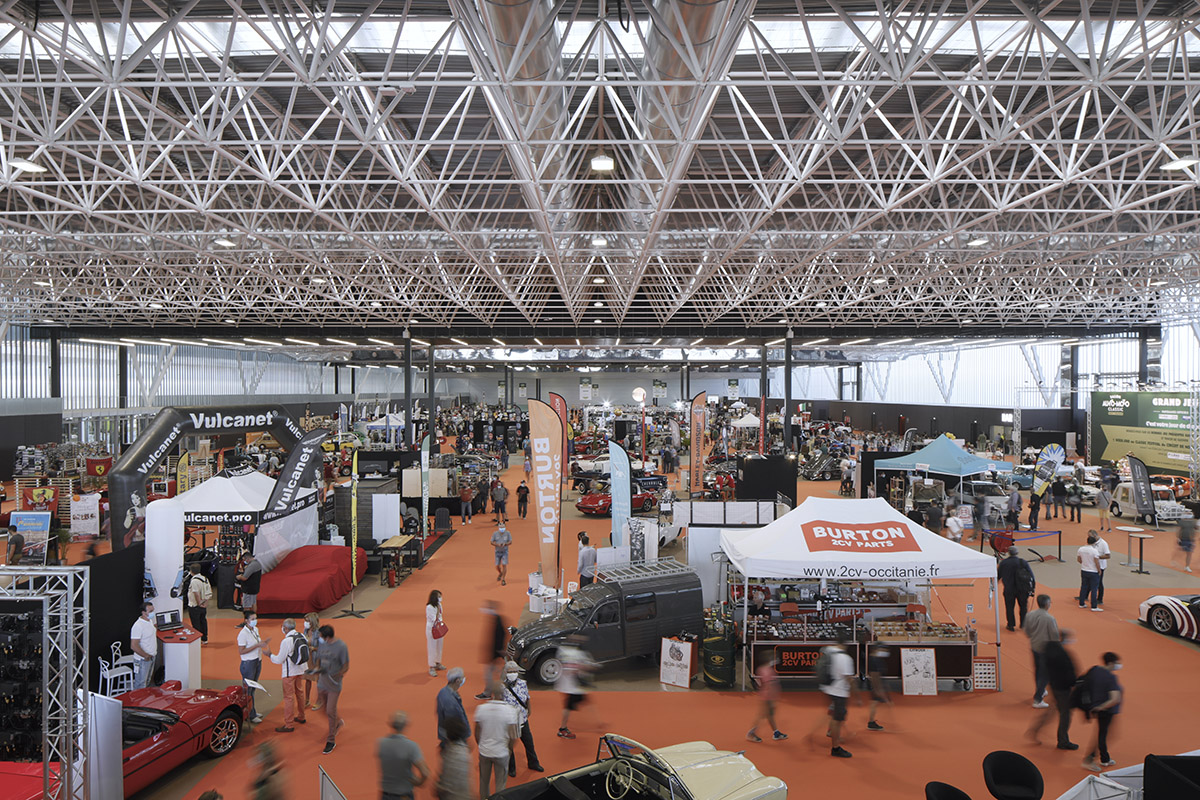 The Exhibition Hall provides a total of 40,000 square meters of presentation area, which can function either as one major exhibition space or be separated into 7 modular halls, separated by a mechanized curtain. Two elevated mezzanines at either end of the hall provide space for reception or VIP program, while overlooking the main spaces.

MEETT is a project about the relationship interior-exterior, and the Exhibition Hall is no exception, as the translucent façade provides the giant hall with generous daylight. 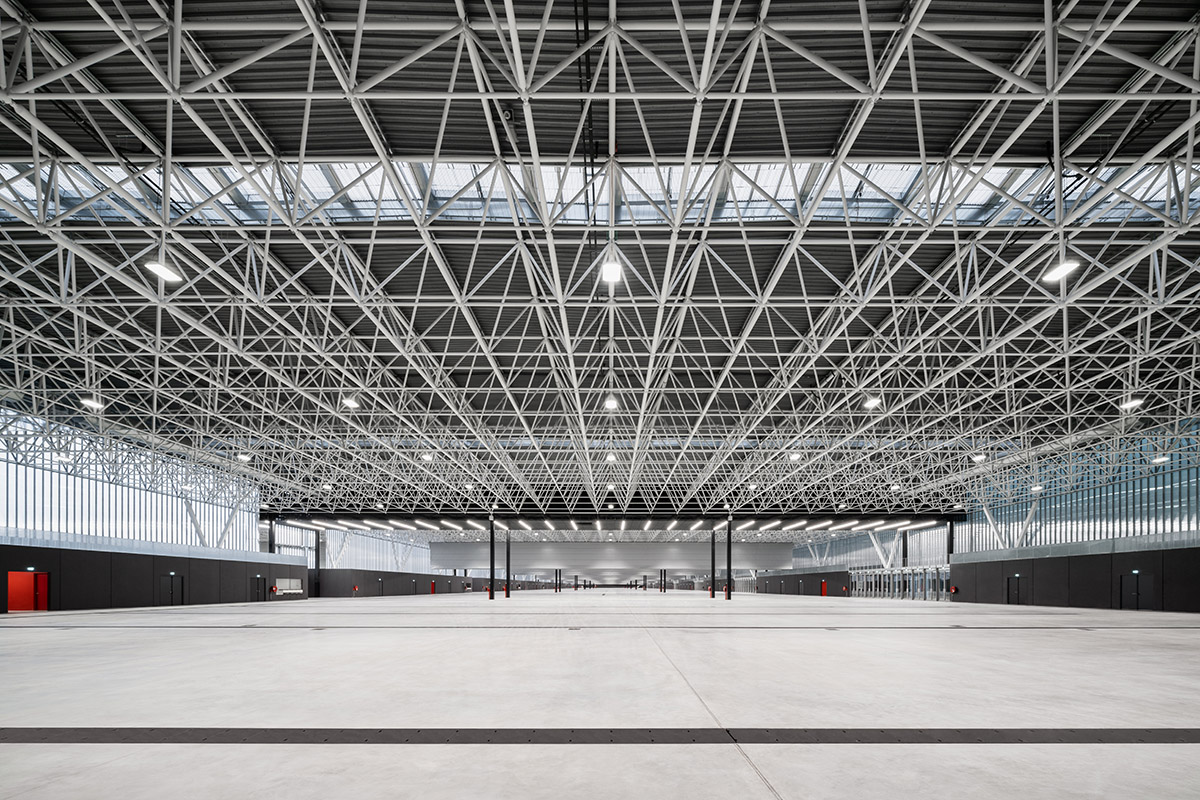 The entire masterplan –including all buildings– is based on a 3-meter grid, following the standard expo distribution, which permits to dissect the building in 3x3 meter cells as if it was a Tetris board, providing endless possibilities to split the use of the ground but also forming an underlying system for all architectural components.

At the center of the project, a 32,700 m2 reception area on the ground floor welcomes visitors into the exhibition halls, the exterior expo and the convention center. This is called the Rue Centrale, and functions, honoring its name, as a street – it is circulation area, information center, and public space all at once. Fully pedestrian, it can house from ticket offices to food stands. 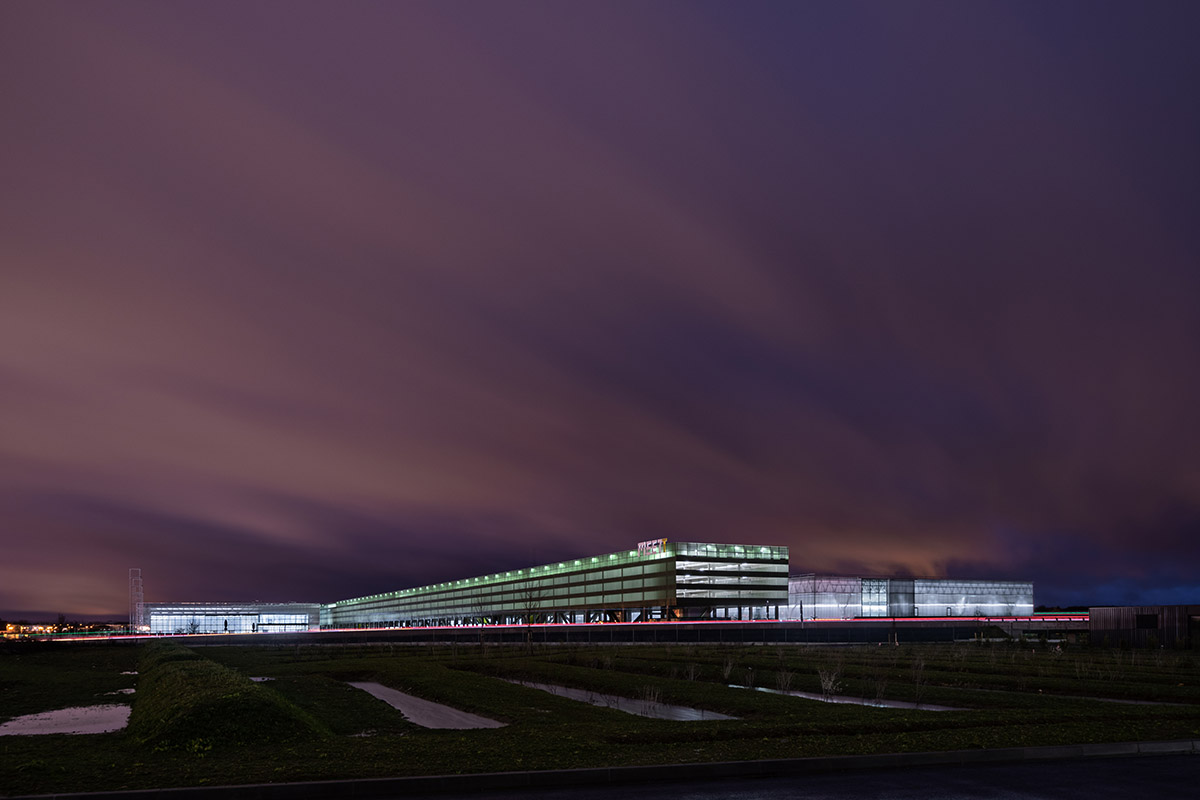 Elevated above the Rue Centrale and directly accessible from it is the carpark, a four-story elevated silo that sits right in the middle of the project.

This building functions as a ceremonial entrance directly into the heart of MEETT, connected to the exhibition areas. It is an open building, to maximize the use of natural light and allow views into the expos from the parking lots. 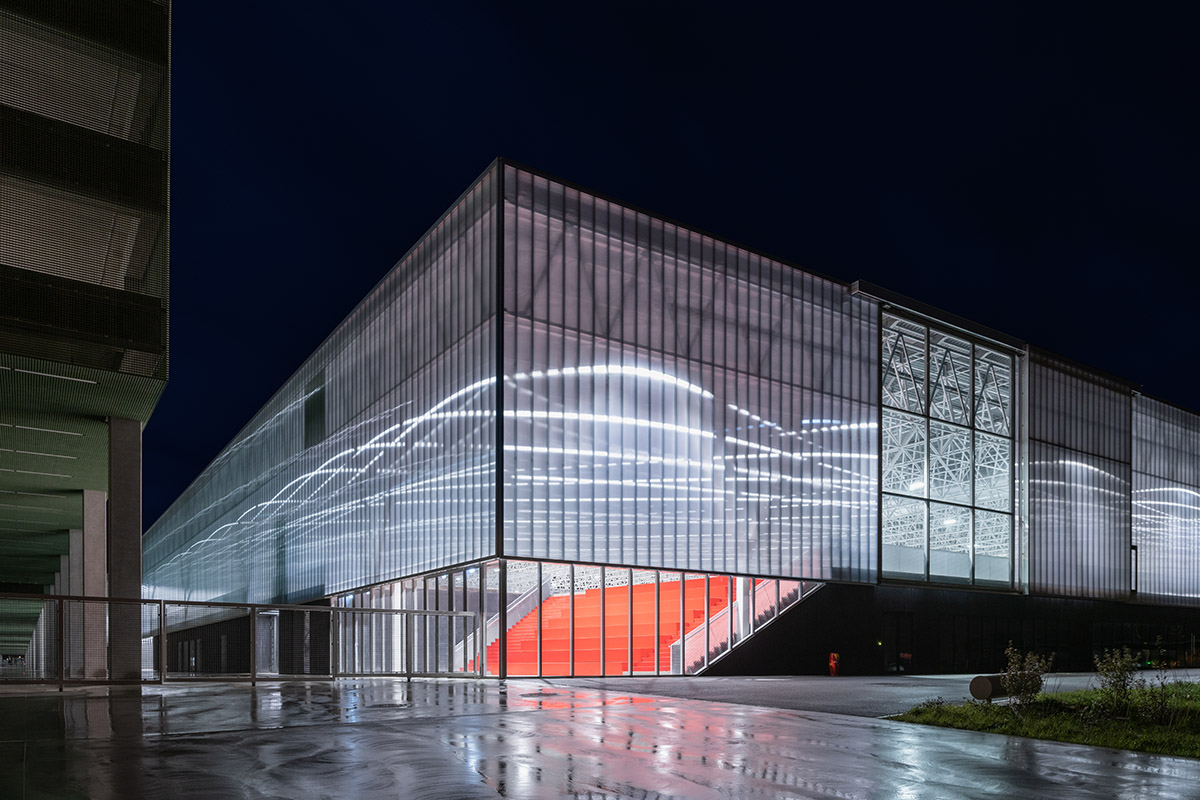 The southern strip of MEETT consists of a multi-function Event Hall and a Convention Center combined in a single building also directly accessible from the Rue Centrale. The entire building can also be transformed into additional exhibition spaces on two levels.

The Event Hall and Convention Center building is designed as a machine. A system of moveable vertical shutters and horizontal partitions allows it to transform in few minutes into a large number of configurations, from small meeting rooms in the upper floors of the Convention Center to an open plan layout bathing in natural light on the ground floor. 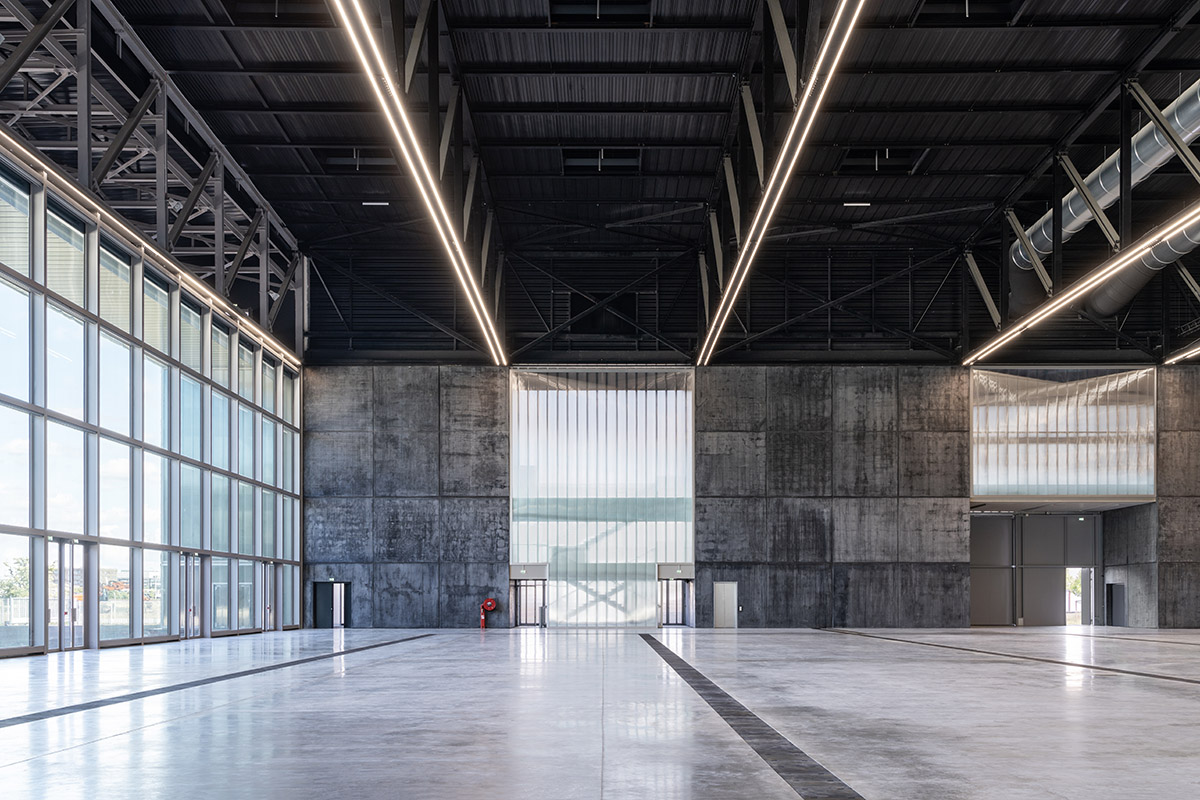 A 13-m tall sliding façade on the eastern face of the event hall can be opened and allow interior events to continue on the exterior event square. 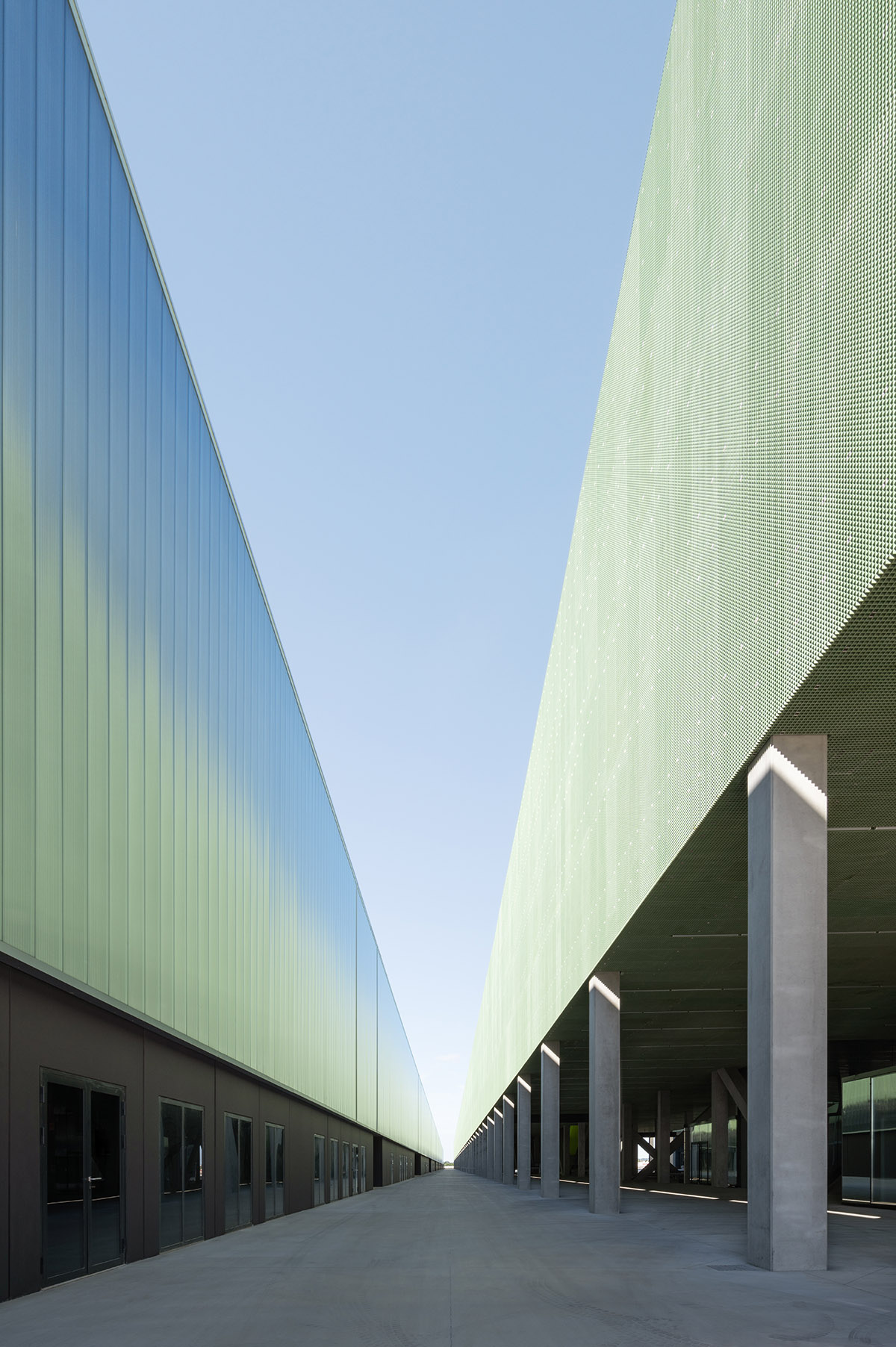 Navigation around MEETT is simple – the routes are intuitive, which combined with clear information signs throughout the complex makes it easy for visitors to find their way. Furthermore, the compactness of the expo reduces the distances that the public need to cover during their visit.

The entire area is accessible to heavy vehicles, with a separate entry and exit point, and an internal road surrounding the north, west and south facades facilitates distribution and management. 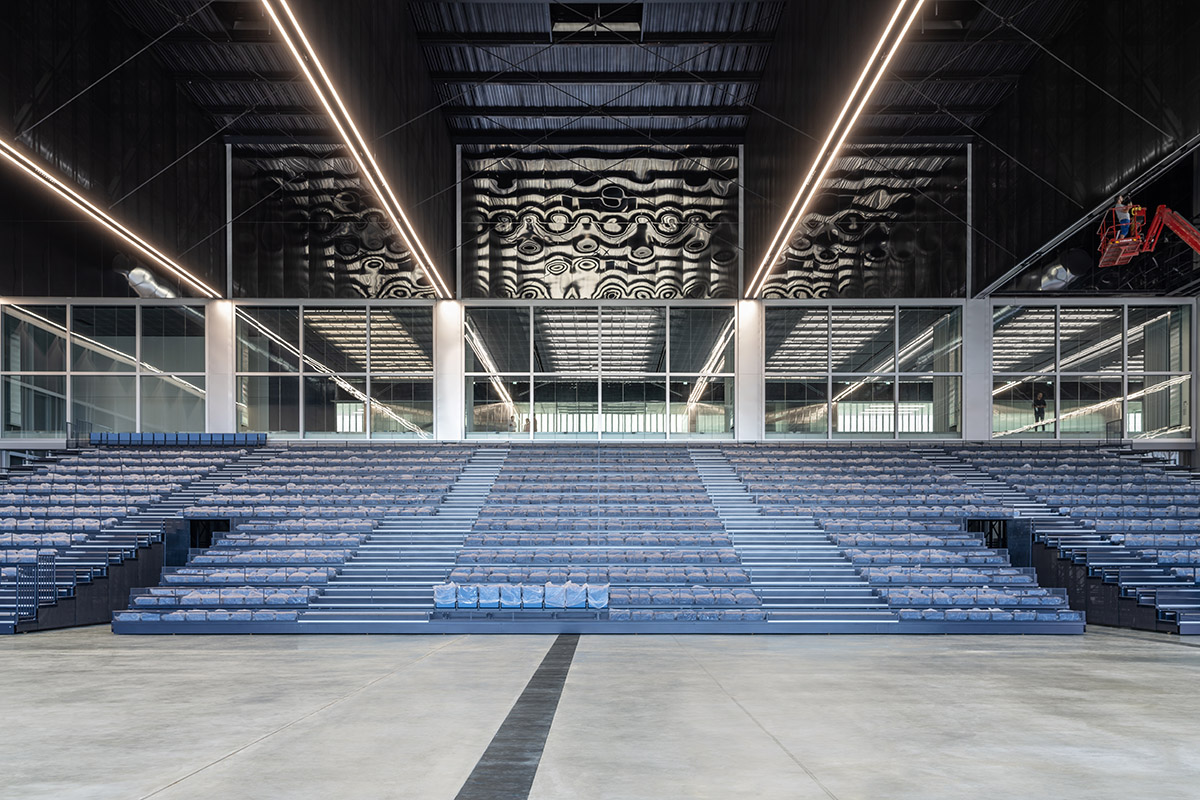 MEETT also features a transportation hub with a tram station, a bus station, a taxi stop and a reception area for cyclists. This hub on the Eastern side of the expo has the potential to accommodate more infrastructure, anticipating the further urbanization of the area.

Directly in front of the transportation hub, a 170m long plaza spans from East to the West, towards MEETT, and provides one single entrance route to MEETT, functioning as an open public area. 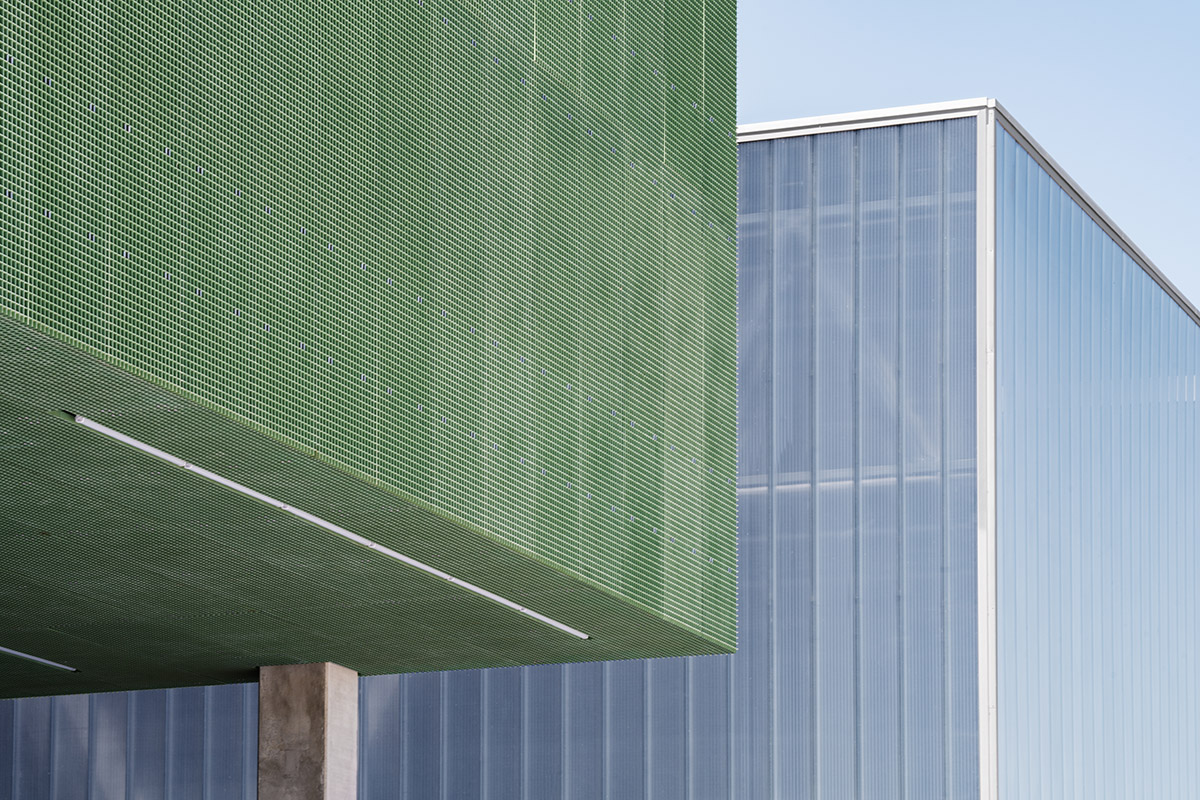 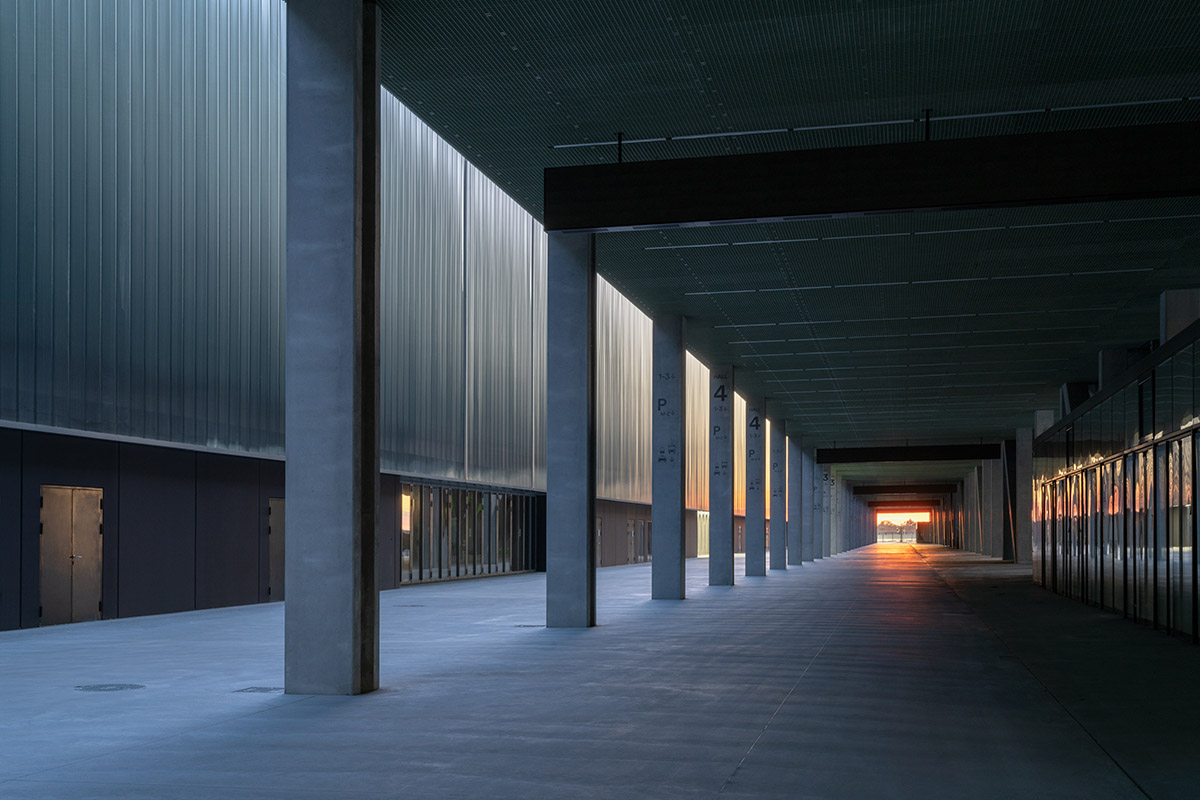 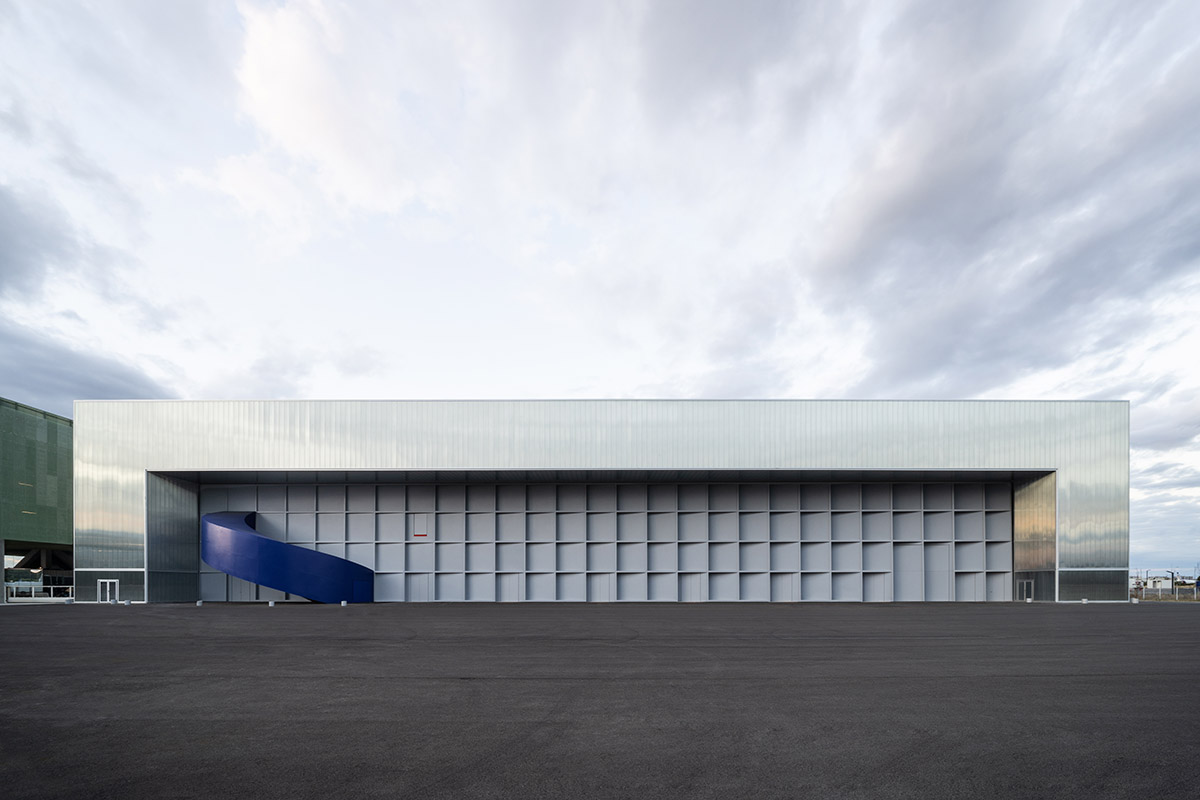 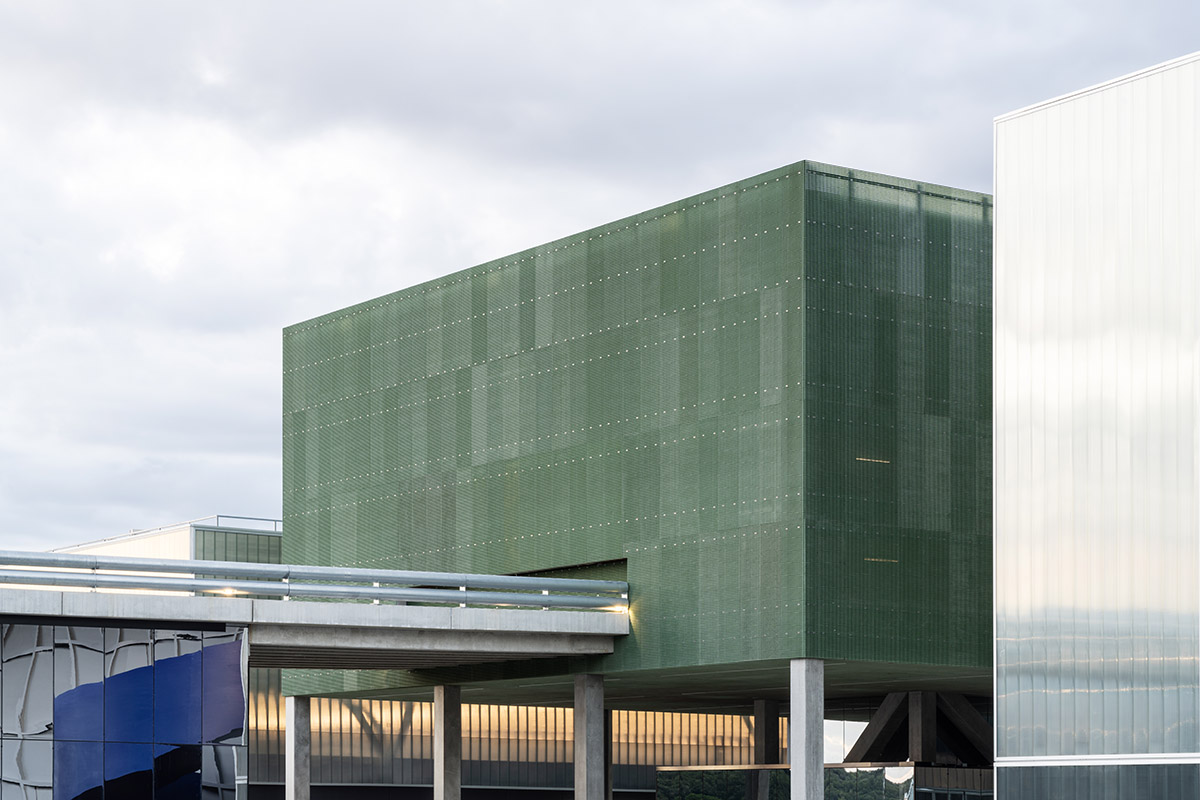 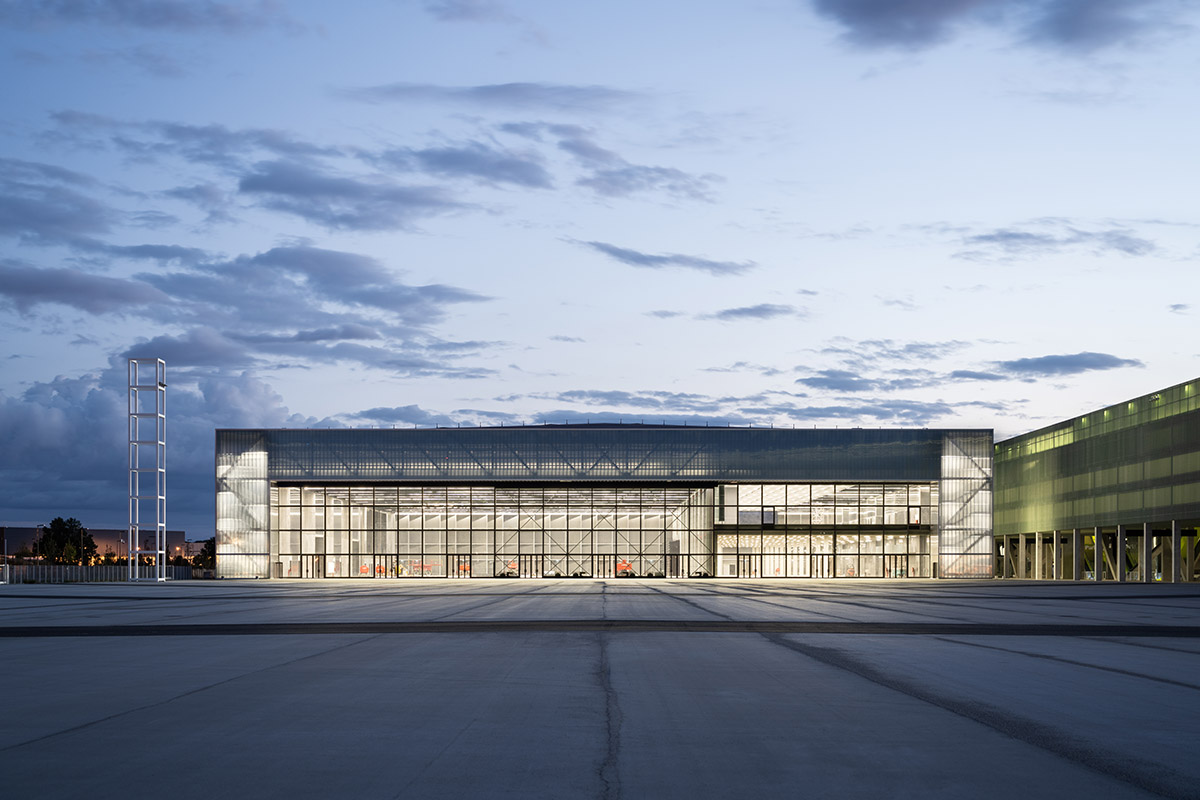 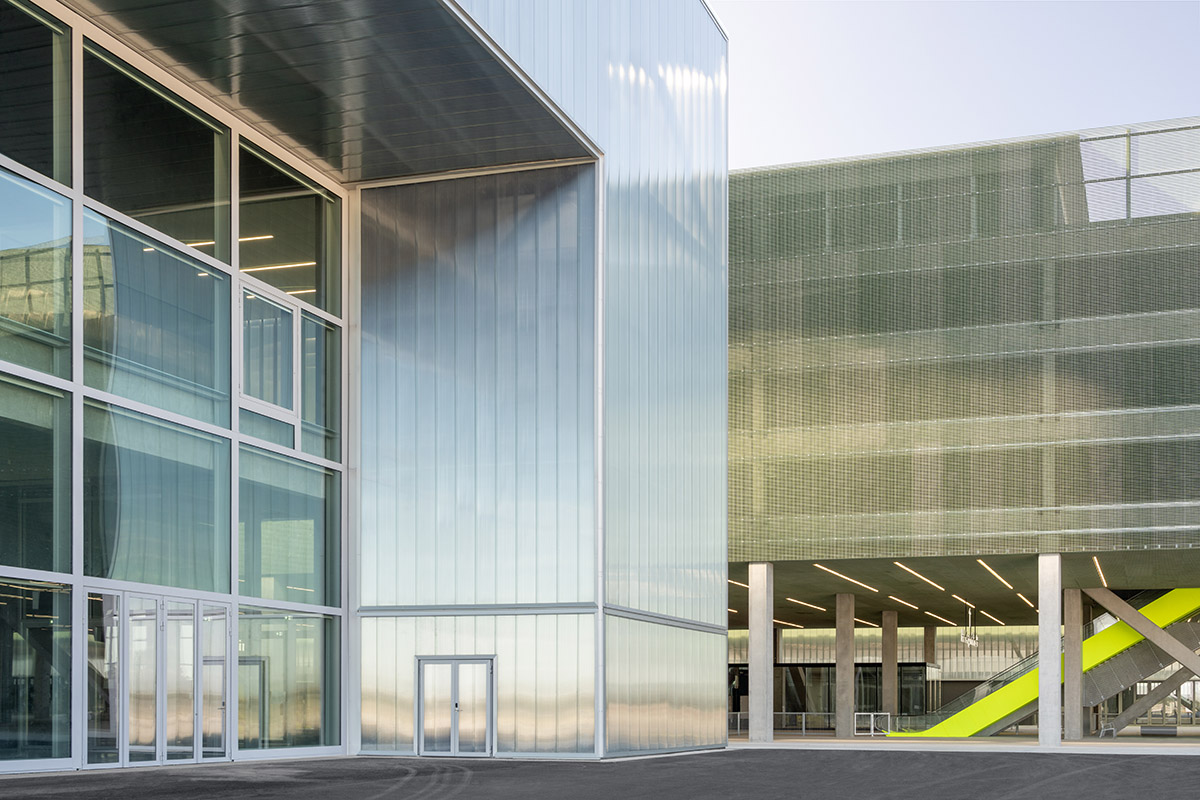 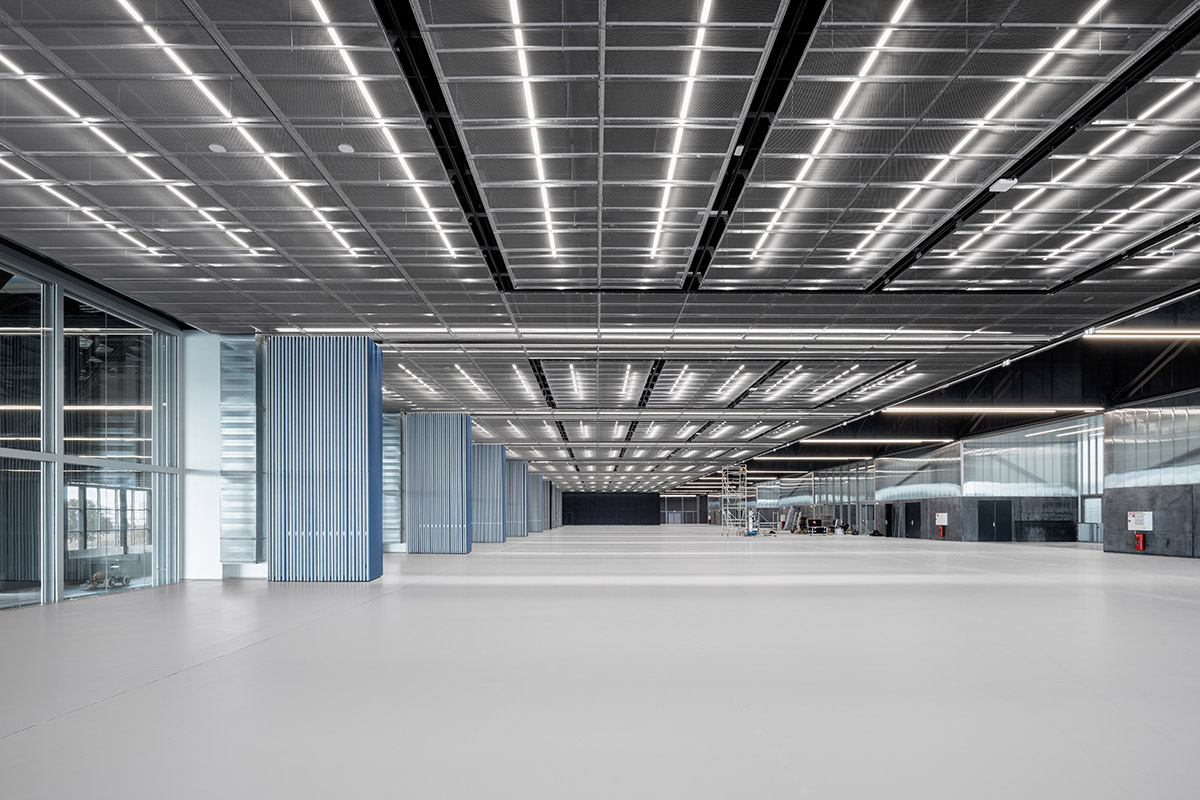 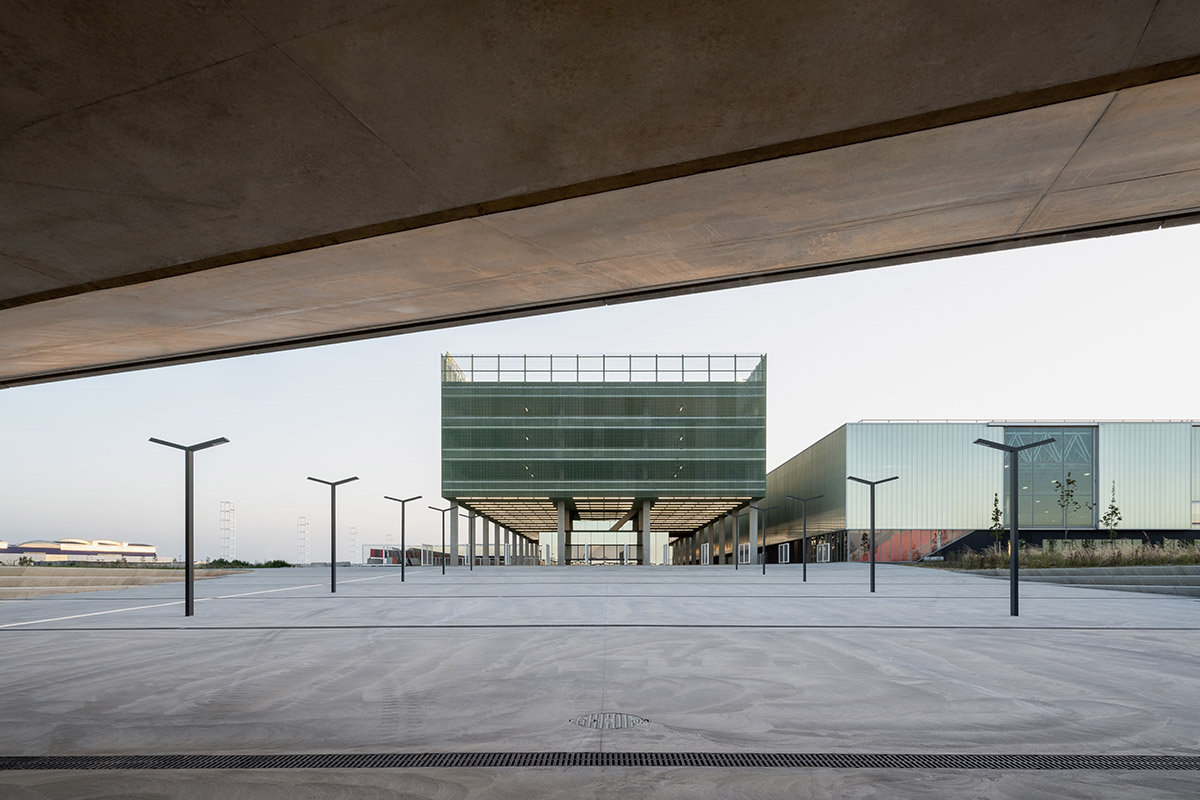 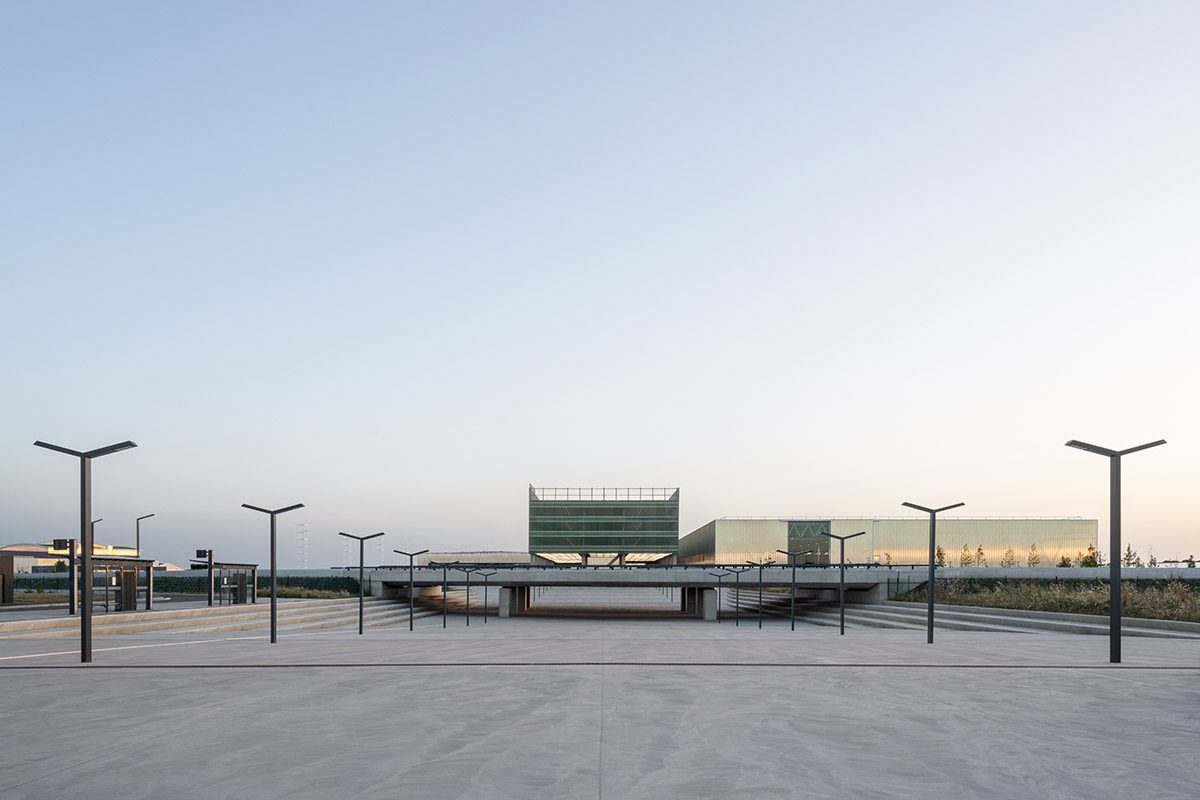 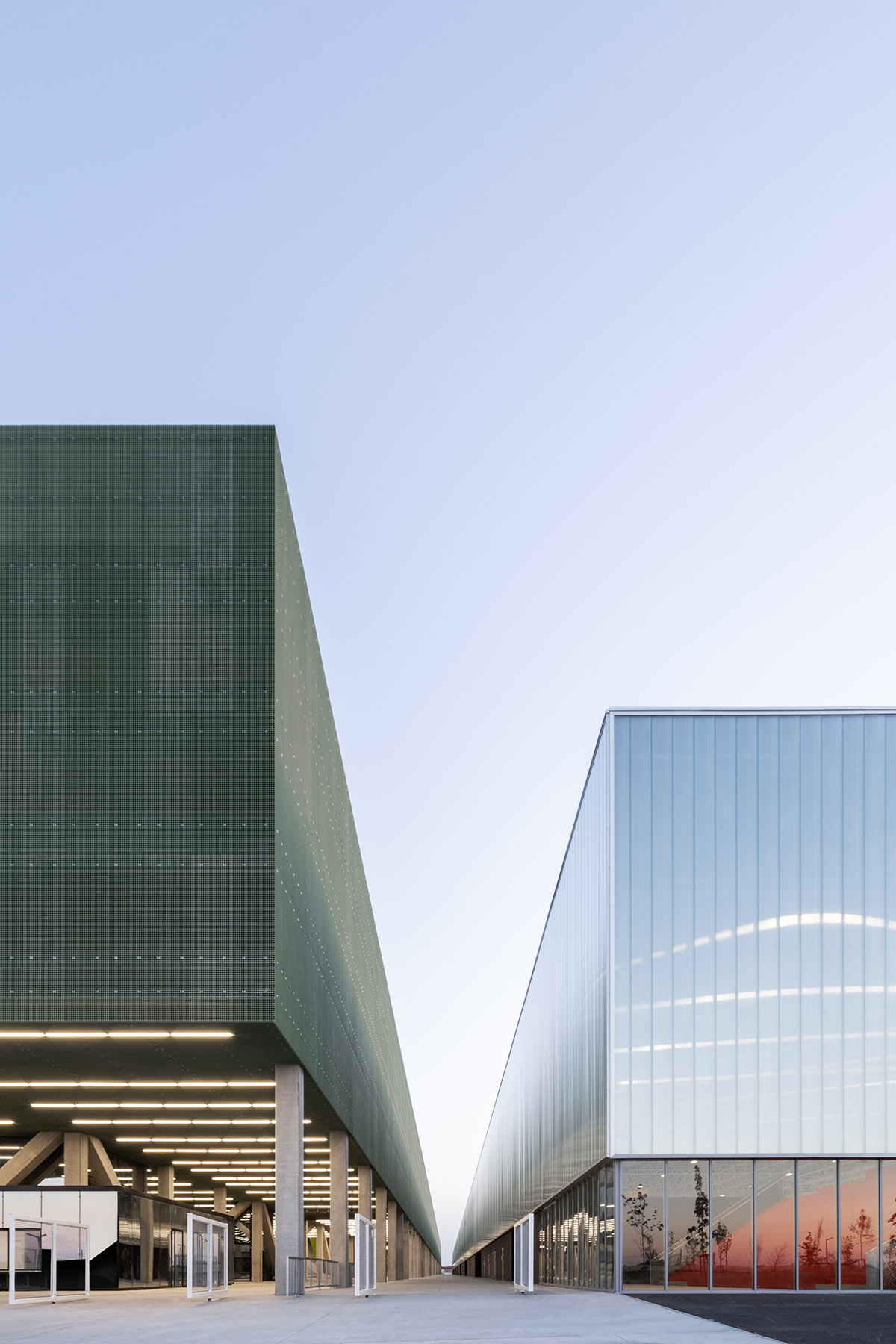 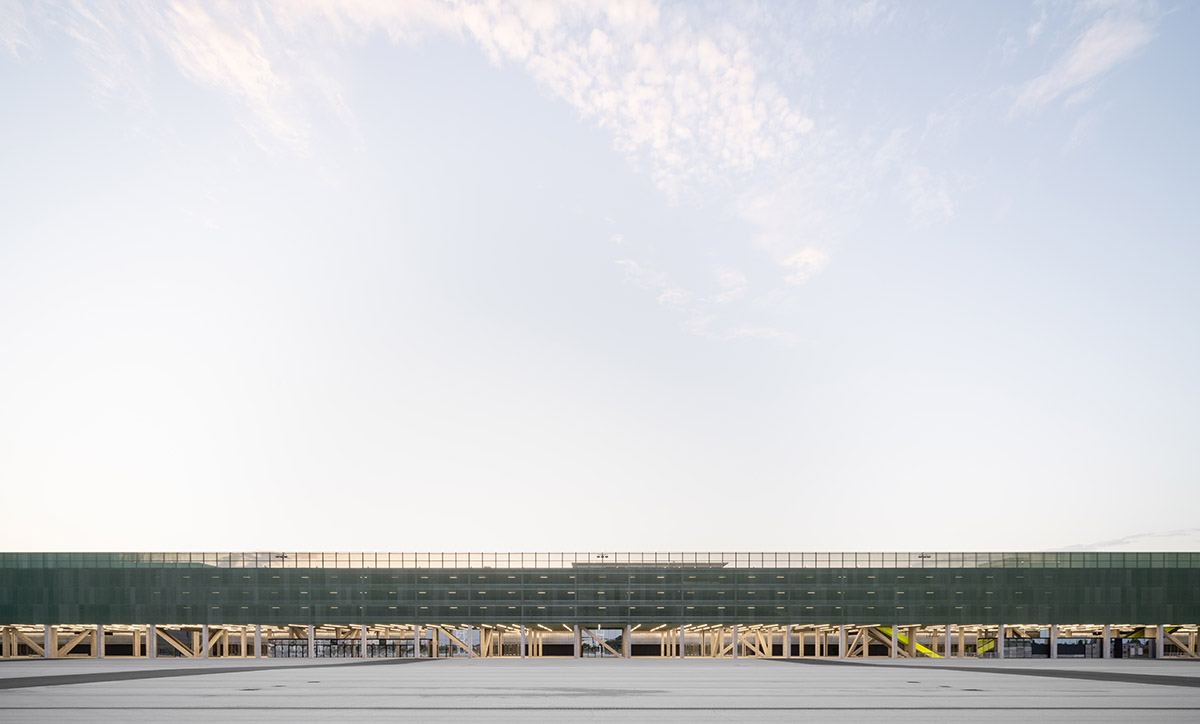 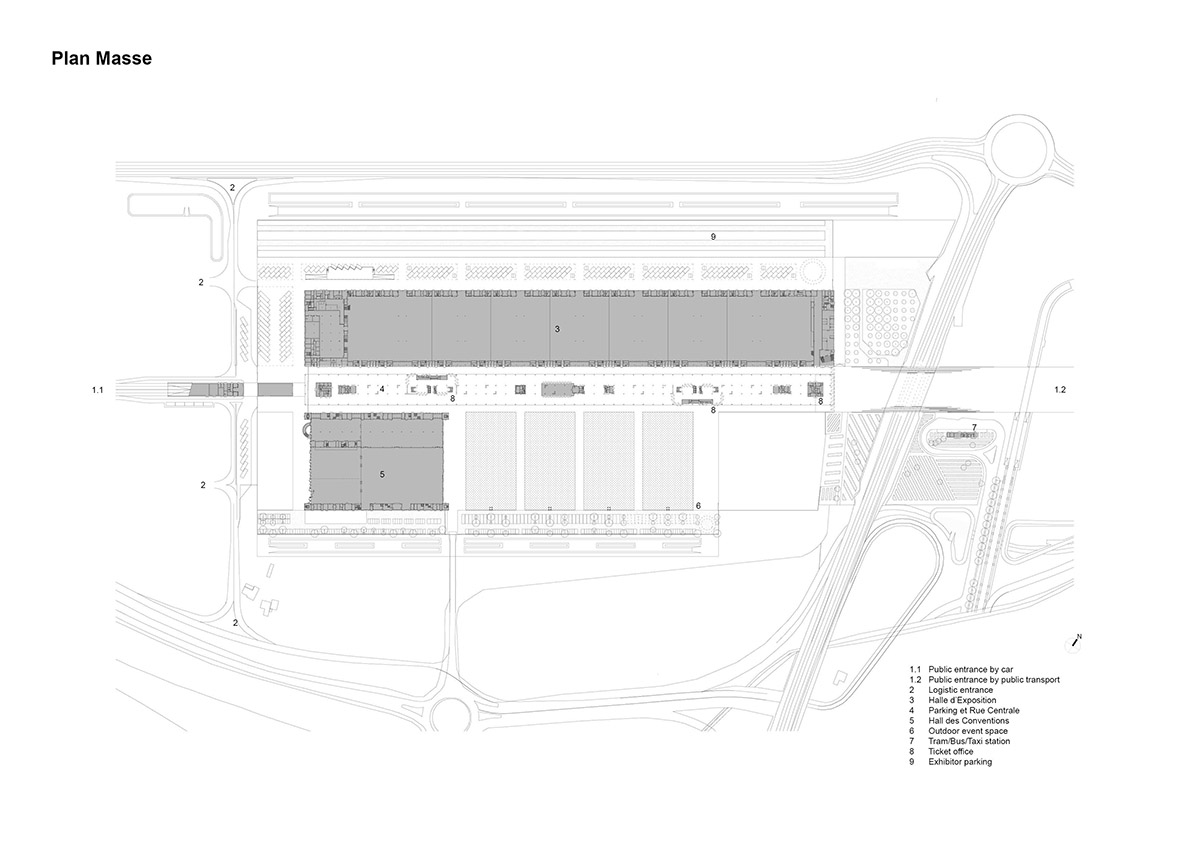 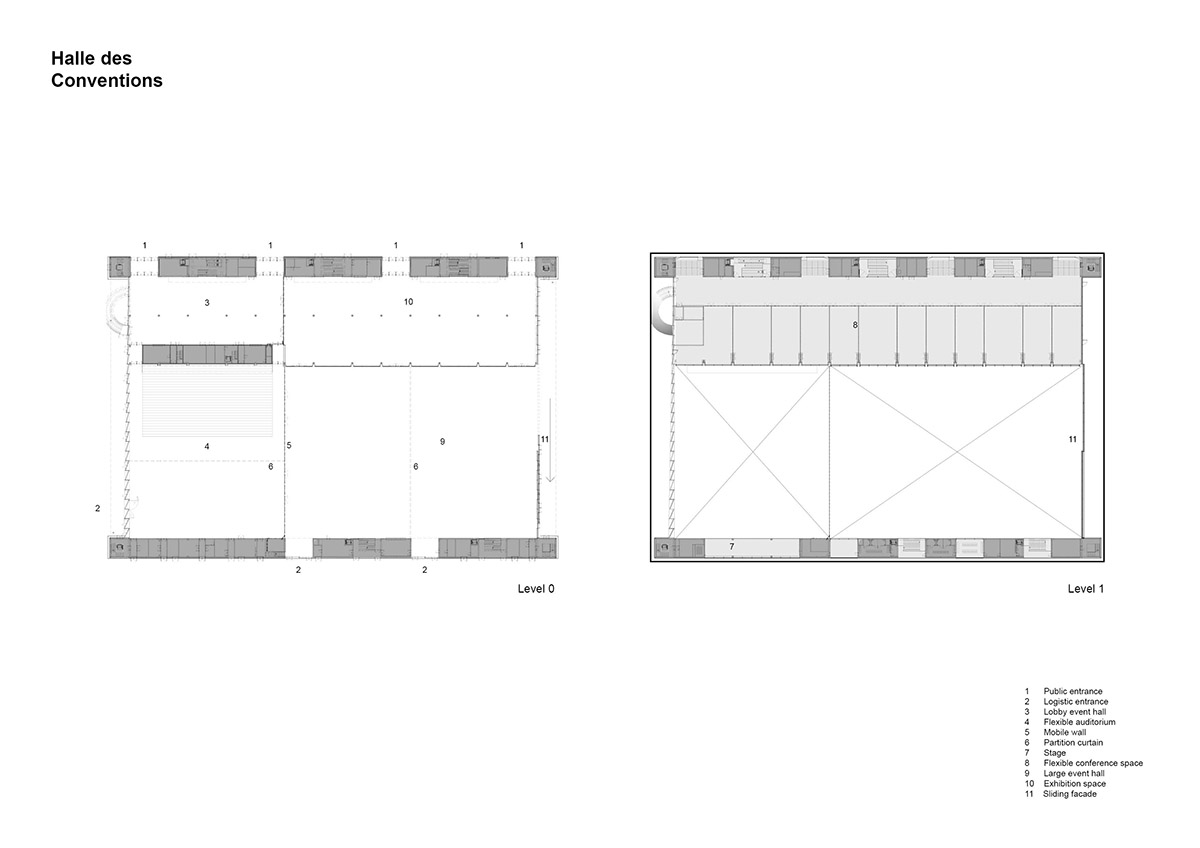 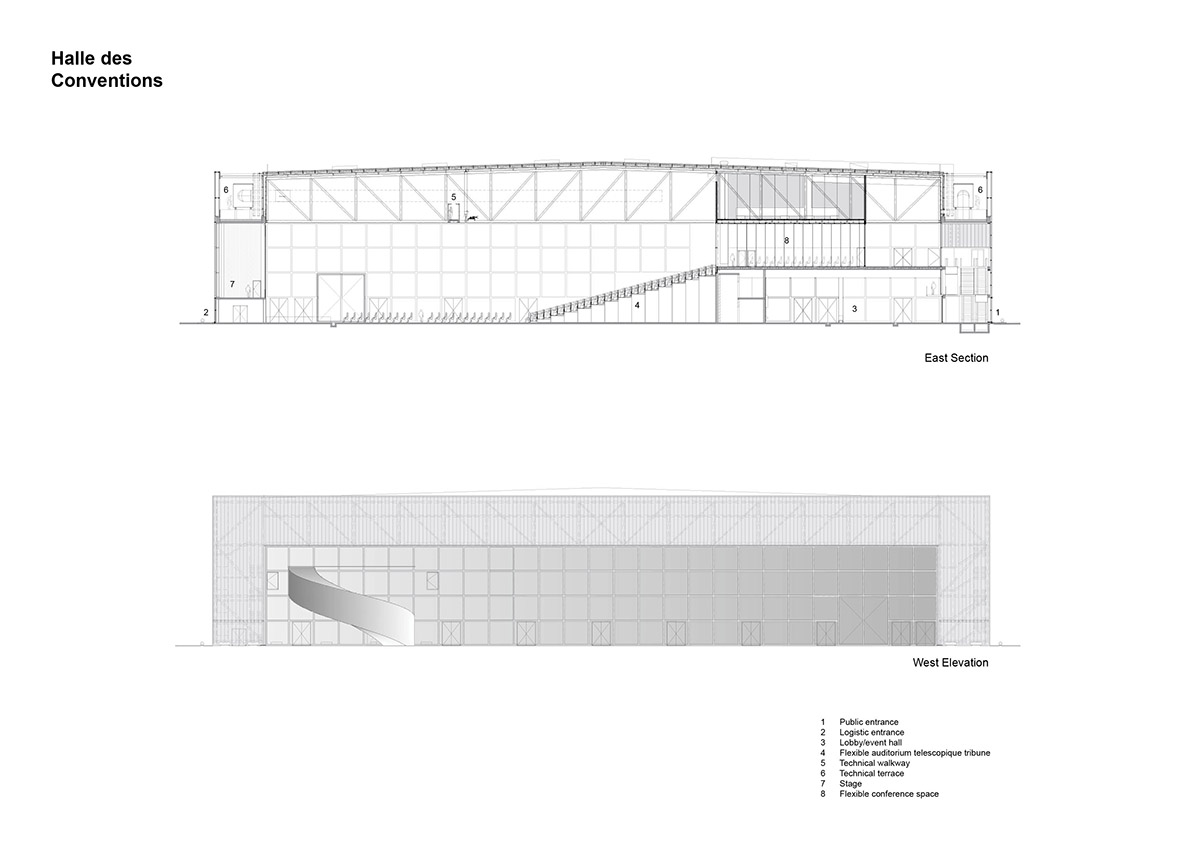 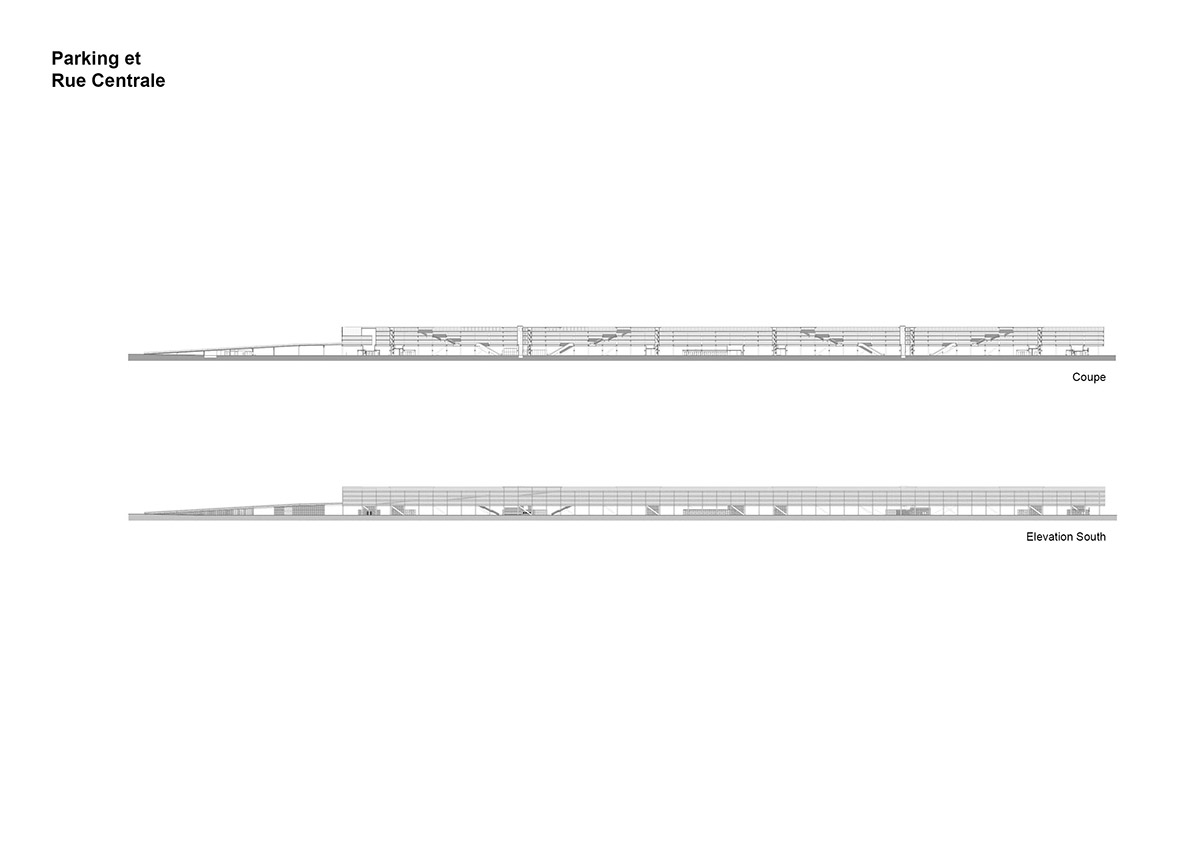