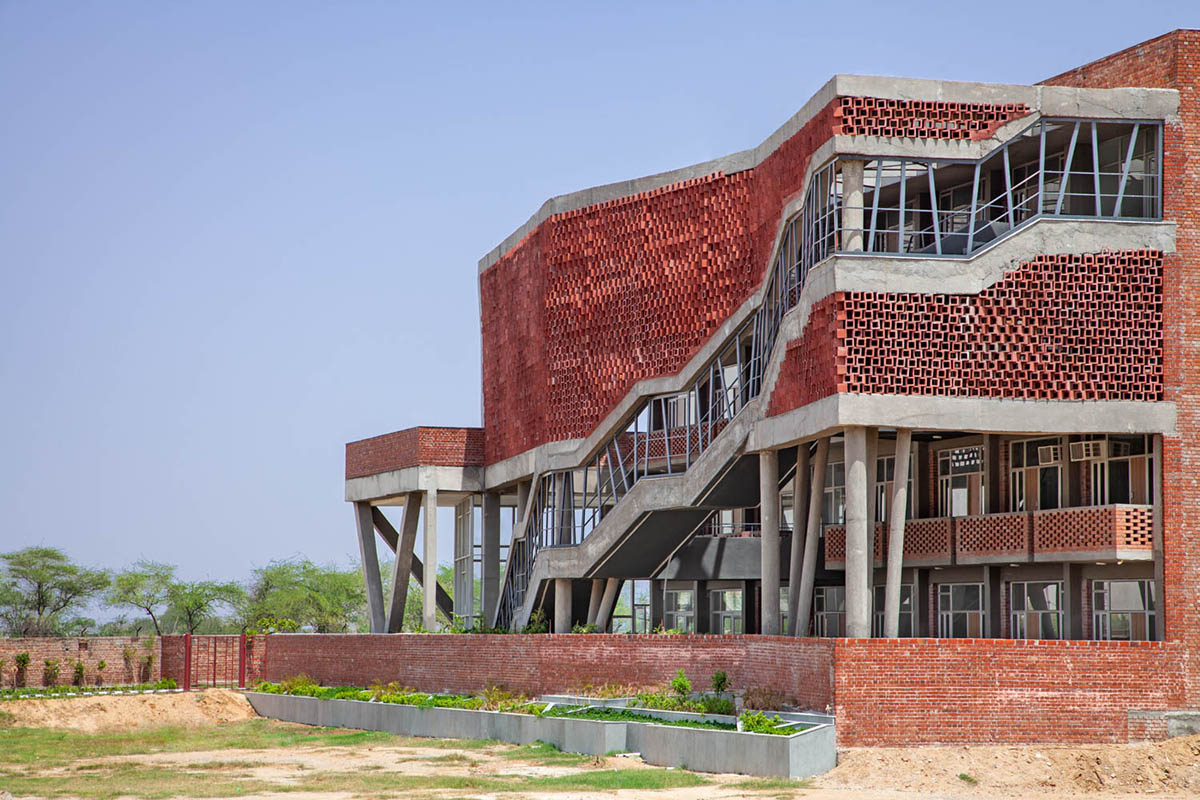 Named St. Andrews Girls Hostel, the hostel block is located at the St. Andrews Institute of Technology and Management in Gurugram. Completed in 2020, the building explores the intersection of education and sustainability through the lens of the vernacular.

Covering a total of 25,000 square foot (2,322-square-metre) Girls’ Hostel takes cues from the adjacent Boys’ Hostel Block and the building is articulated with brick and fair-faced concrete, with exposed structural members abutting the structure along all sides. 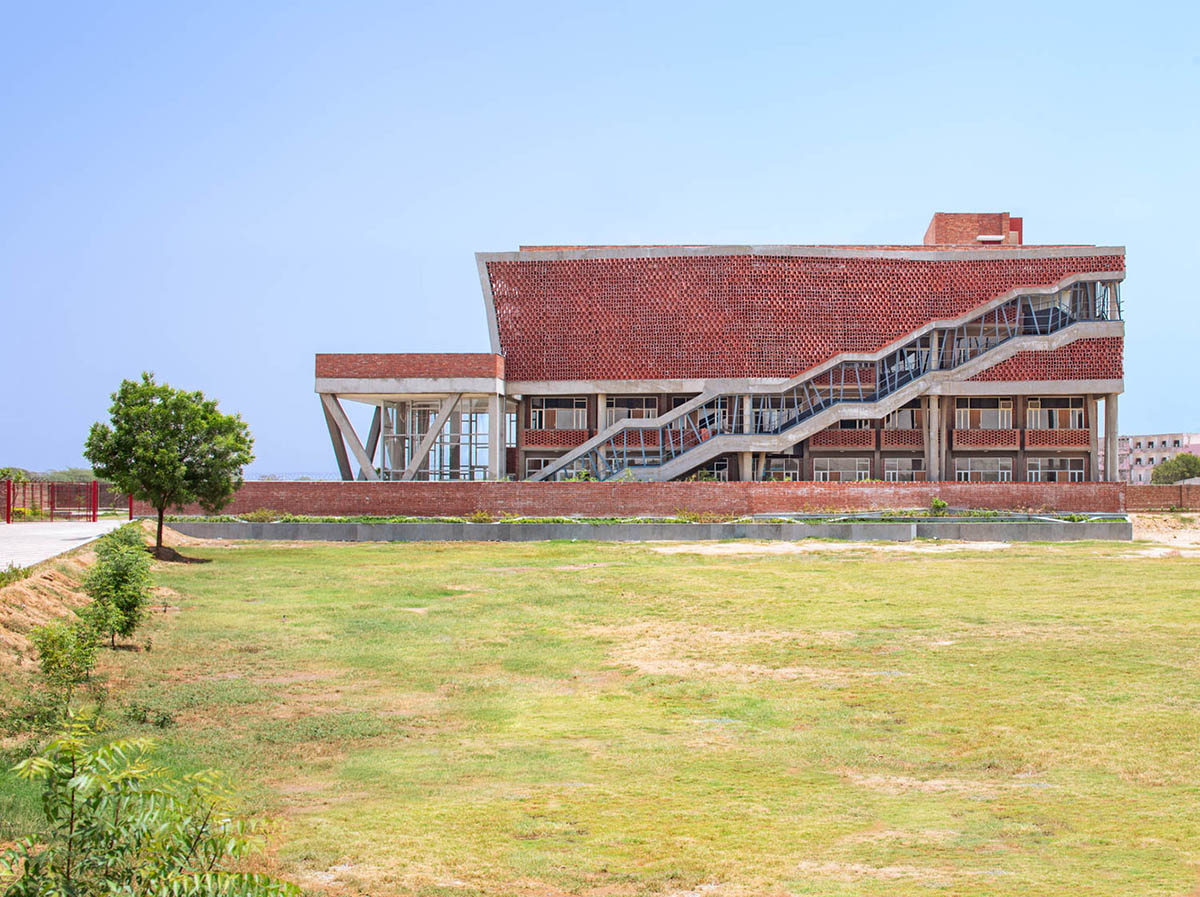 "The hostel's design empowers students with freedom of movement within an environment that prioritizes thermal comfort and functionality to become an exemplar of zero energy design," said Zero Energy Design Lab.

The hostel accommodates up to 130 students, with dorm rooms spread across four levels in addition to hosting ancillary spaces like a pantry, recreational areas as well as social spaces. 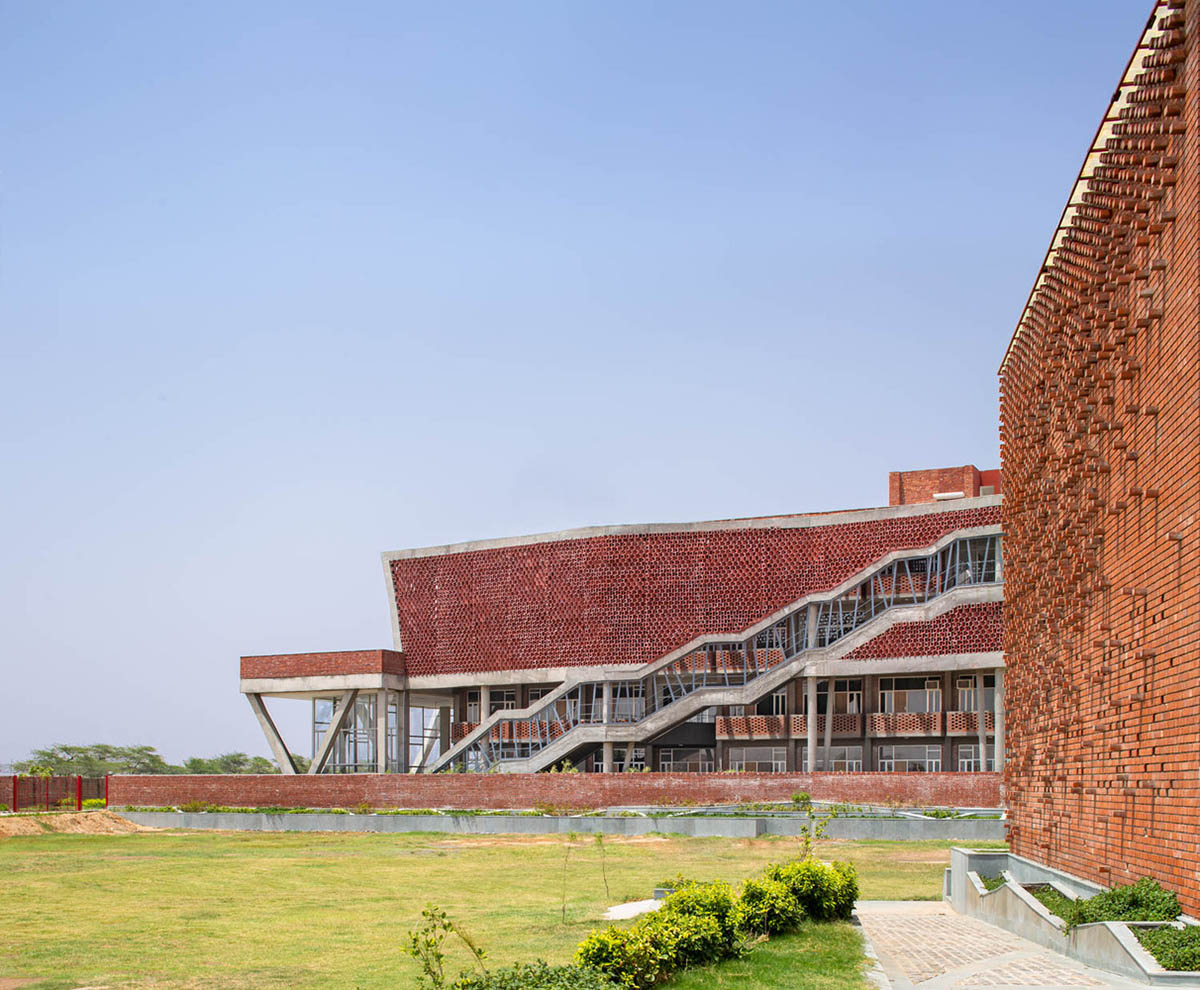 On the ground floor, there are 12 double-occupancy rooms along with a double-height reception, pantry, and indoor activity lounge where students can organize gatherings and social events.

"The design faced a series of challenges from conception to execution," said he studio.

"The primary design challenge was to create a secure hub for the girls — a campus within a campus fitting into the urban master plan that did not restrict the movement while establishing a connection with the outdoors." 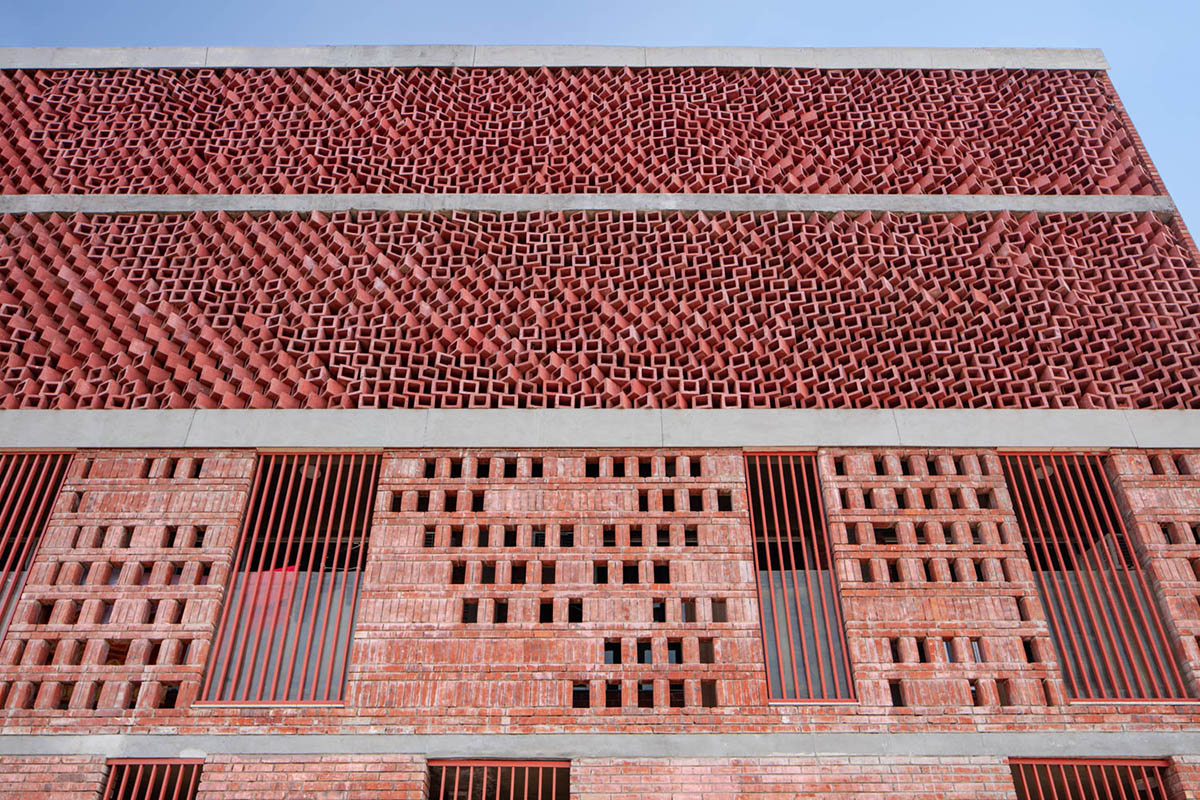 The layout of the building incorporates indoor and outdoor spaces that connect physically and visually at different levels to enhance interactions and social activities. 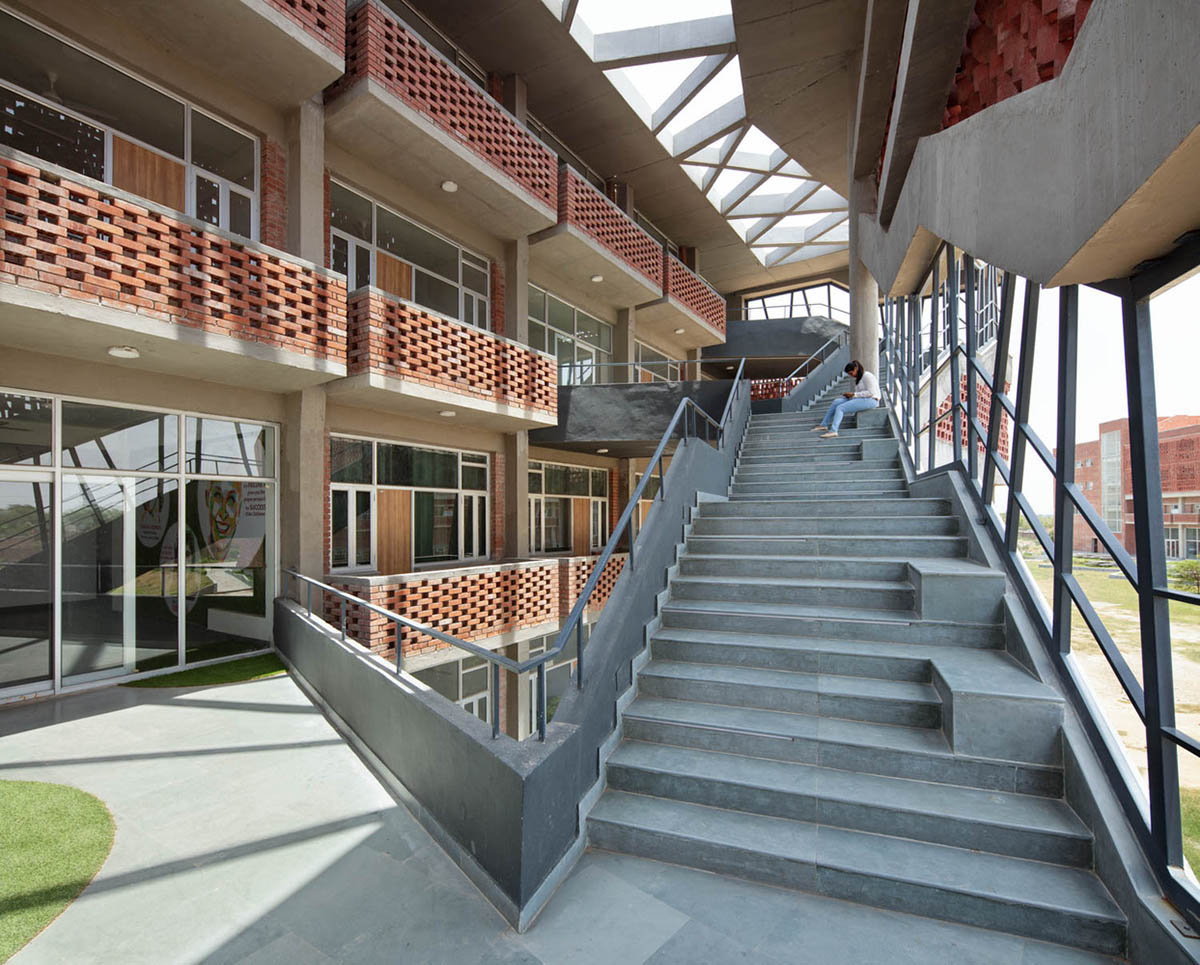 To bring in a sense of the exterior landscape, the architects designed the entrance foyer and lobby as outdoor spaces to face the west and are connected to the pantry so that students can enjoy their evenings outside with a spill-out into the green landscape.

For the building, the students have been given the freedom to create their own space in a safe environment, without any imposed restrictions. 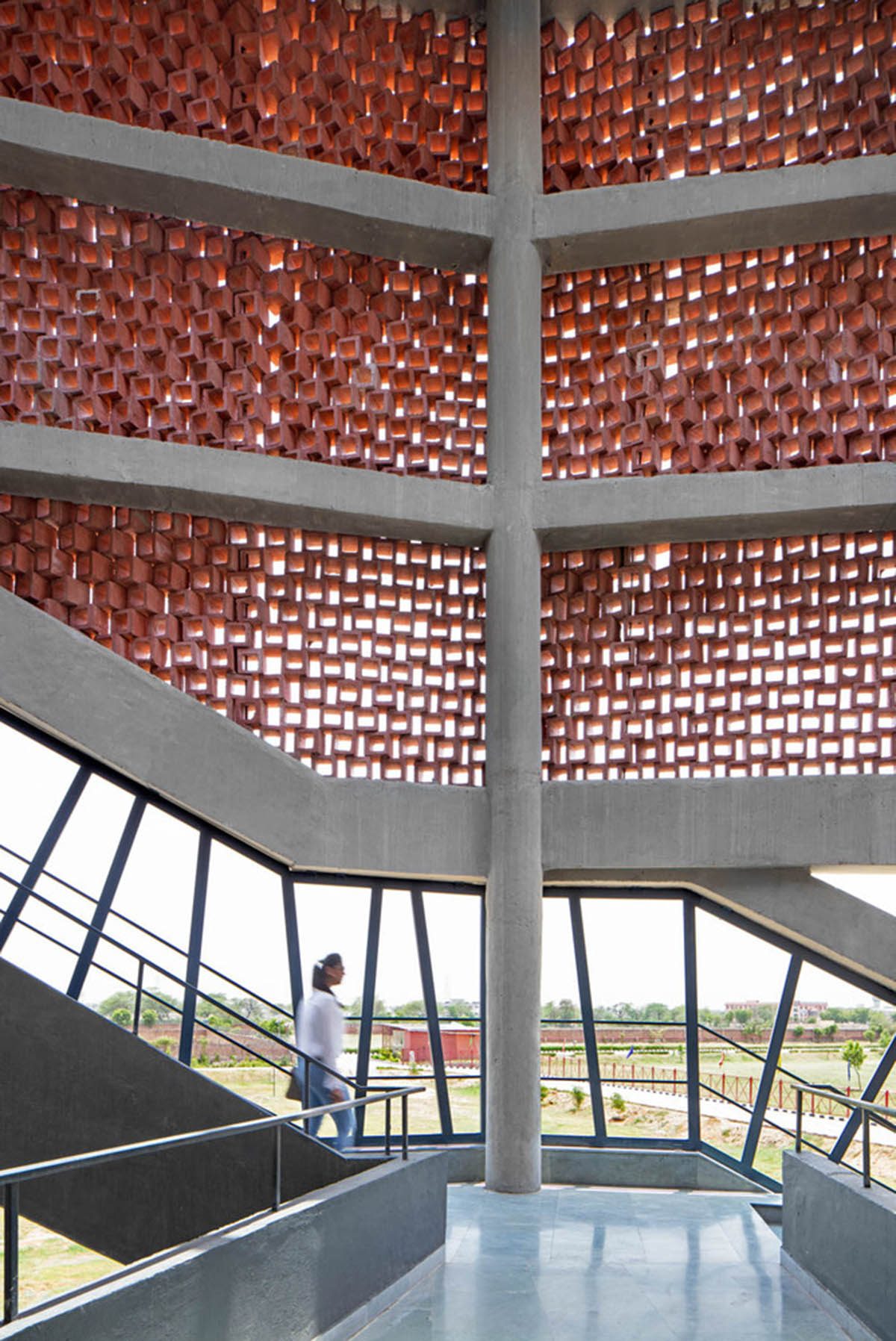 In terms of construction, the studio attached the staircase to the façade which was a key design challenge. The free-standing façade was to be constructed at a 30 feet distance from the building, spanning a height of three floors keeping in mind structural integrity and earthquake resistance. This was brought to life through an extensive scaffolding and casting process. 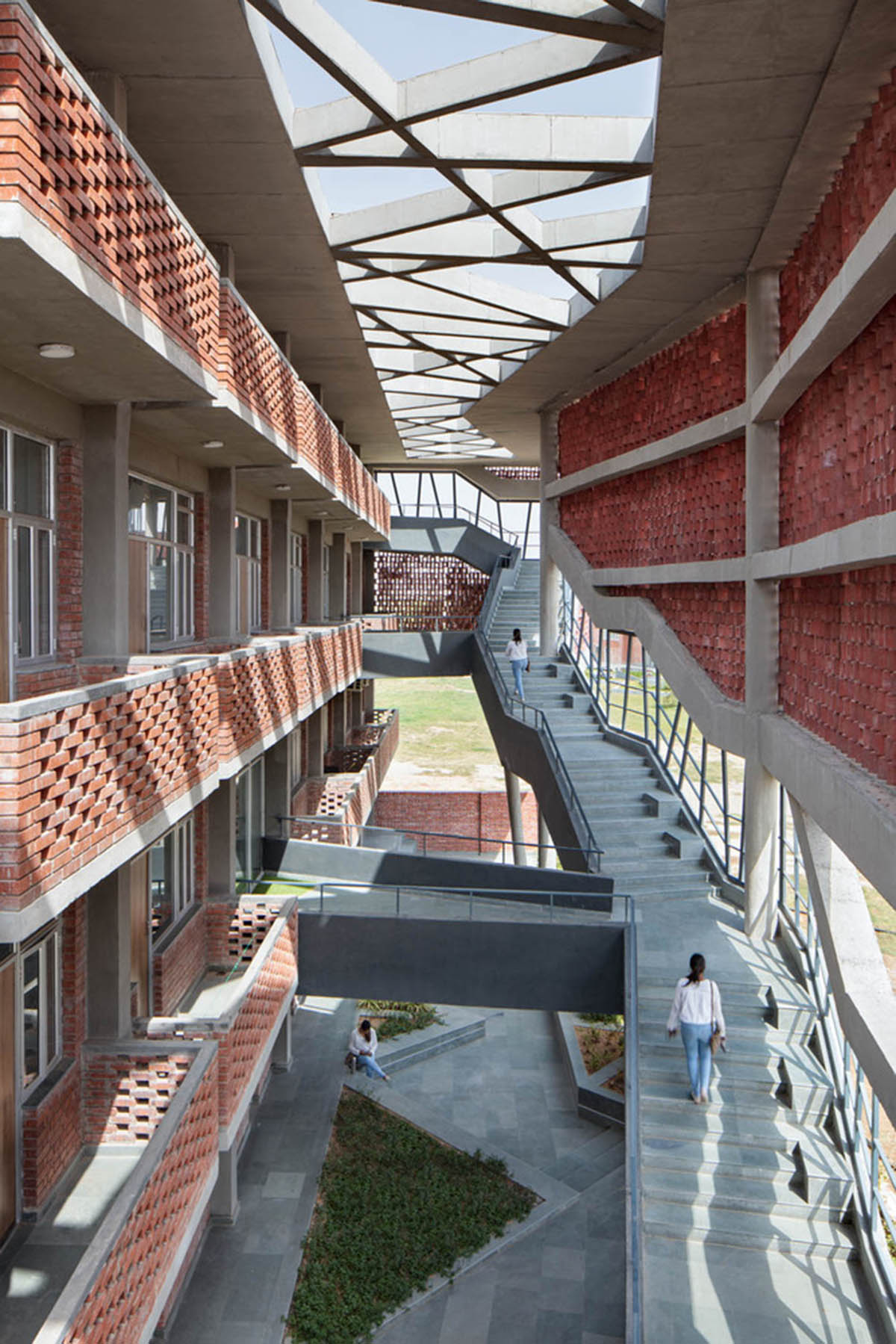 The principles of design and planning ensured that people should experience differently and adapt, up to a certain extent, they needed to experience various indoor conditions, depending on their clothing, their activity, and general physical condition.

"As students move from the interiors of the building into the open, they experience distinct transitions in varying thermal environments. The activity lounge on the ground floors placed next to the landscaped court," said the studio. 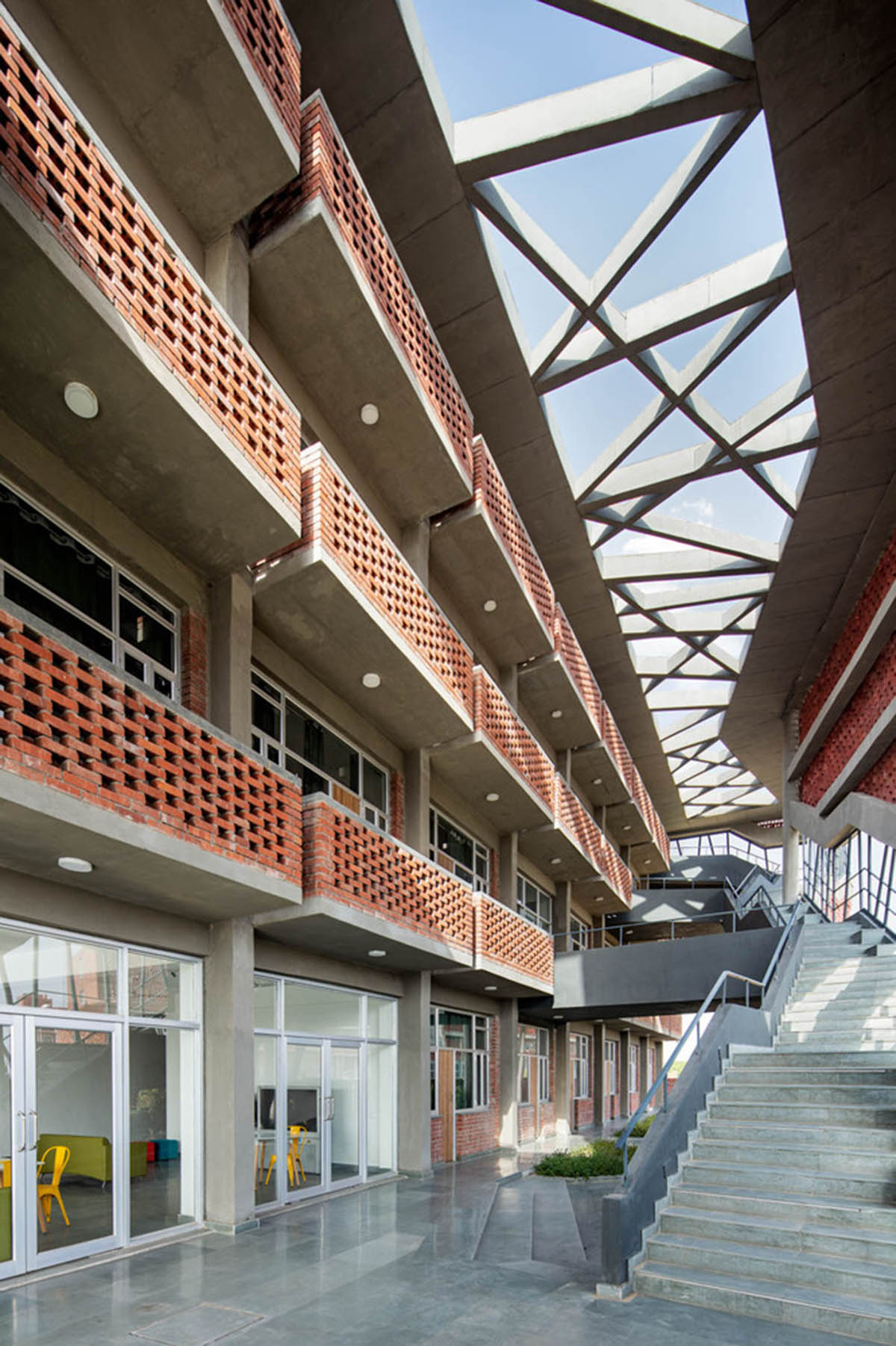 "From the core of the building towards the outdoor, the next transition is the second-floor terrace along the building’s west façade that attracts students in the mornings and late evenings in summers and serves as an all-day space to congregate during winters," added the architects.

The studio kept the staircases as hubs for social interaction. There is a subsequent transitional zone at the heart of the building which is a staircase, aesthetically incorporated into the south facade, connecting all the floors. 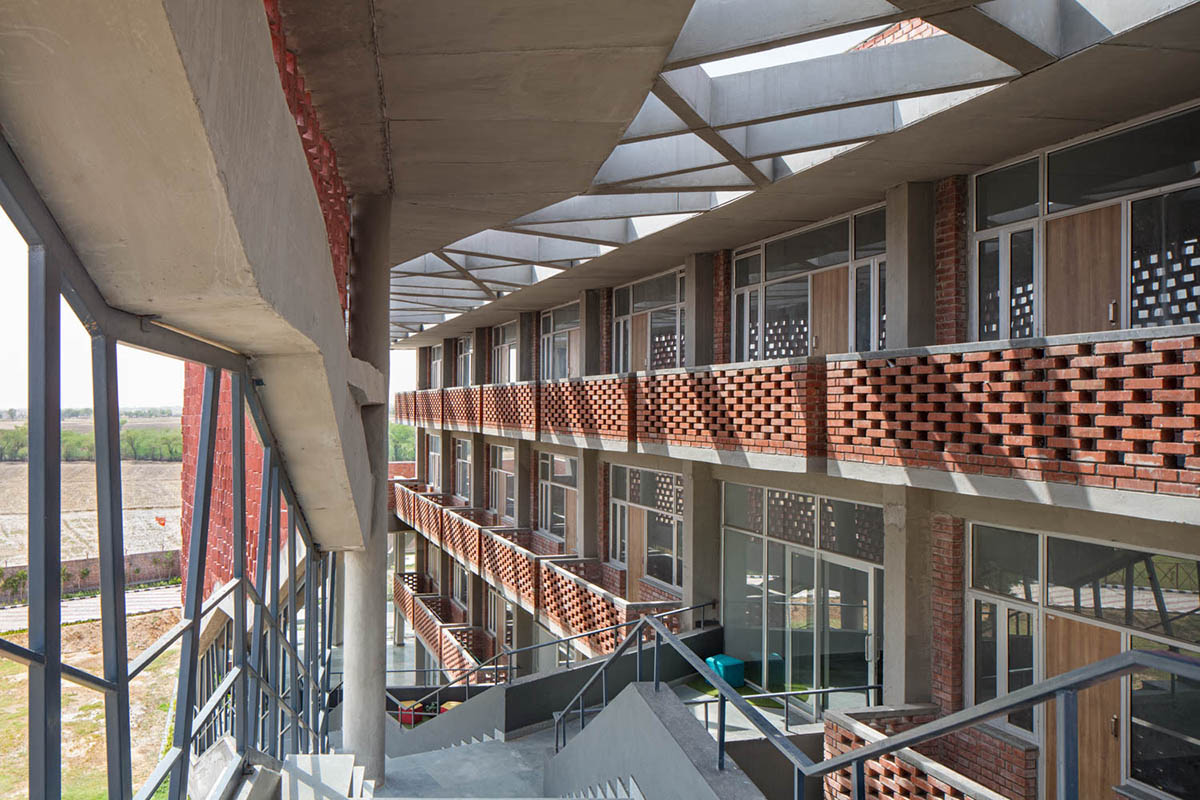 Transitional and circulation spaces such as bridges open into lounges and pause points to create room for socializing and group study. Since the bridges create a visual connection, they enhance interaction and interconnection. They seamlessly extend into the student lounges on multiple floors creating fluid spaces. 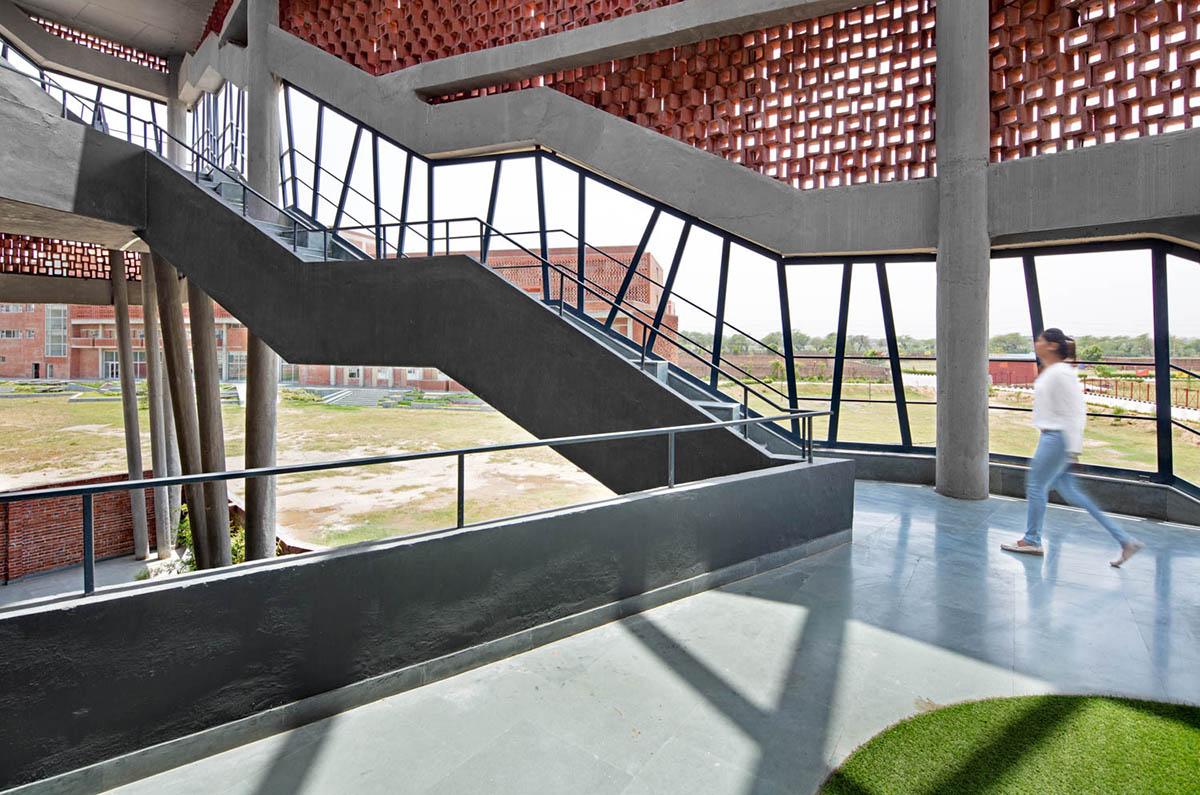 The staircase manifests as the fundamental social nucleus that is home to all activities, from large scale celebrations and events to quick informal conversations.

The exterior lobby area often serves as a badminton court in the evenings and the courtyard that hosts the frequent carrom games are spaces that encourage sports and other similar games. 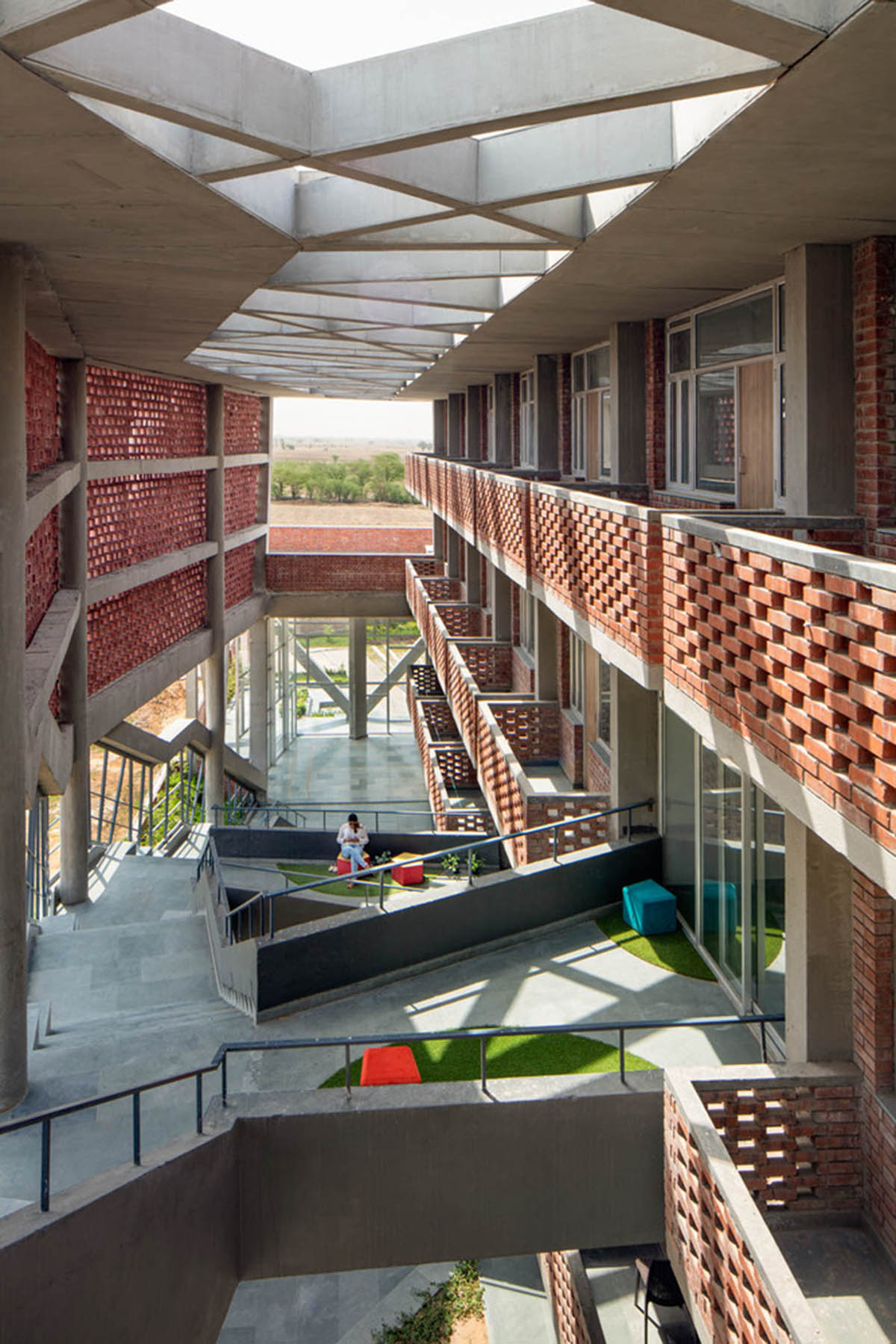 For its façade, with limited space available along the northern façade of the hostel, the studio created a double-skin façade that has been developed with the intention of creating a semi-permeable layer that would help in shading and regulating the temperature between the exterior and interior environments via a controlled airflow.

Designed parametrically, the parametric screen takes cues from the previously developed façade that spanned the adjacent boys’ hostel within the institute. The Boys’ Hostel Block’s façade was designed as an envelope in which the rotational angles of the brick were calculated in order to block diffused and direct radiation.

The interior second skin provides a volume where the user can step out to a shaded environment such as a balcony or court. For the material of the building, the building’s materialization is based on concrete and brickwork that binds the different floors together. The columns are round in shape to enhance visual appearance as well as physicality. 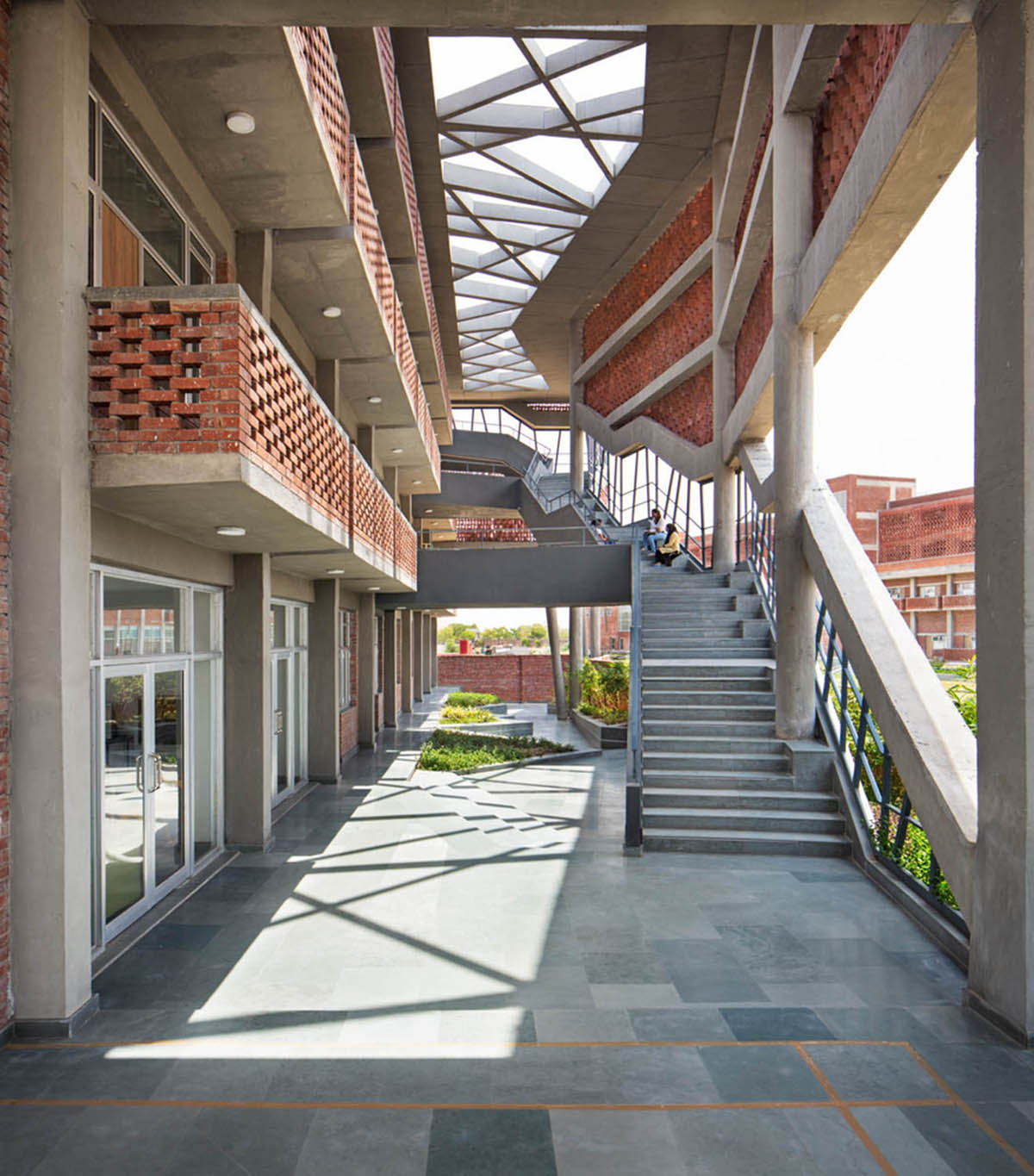 Moreover, instead of employing singular columns, the sheer mass is broken down into three columns in a tripod-like configuration to provide better structural stability as vertical support. The pergola on the roof is designed using cement board and steel beams to achieve lightweight construction and optimum design quality.

The landscape design has been designed to enrich the space by bringing the greenery inside to serve not only aesthetic but also functional purposes. The studio created a shaded courtyard hosting a diverse variety of plant species that require lesser exposure to the sun. The peripheral areas feature bamboo that creates a screen. 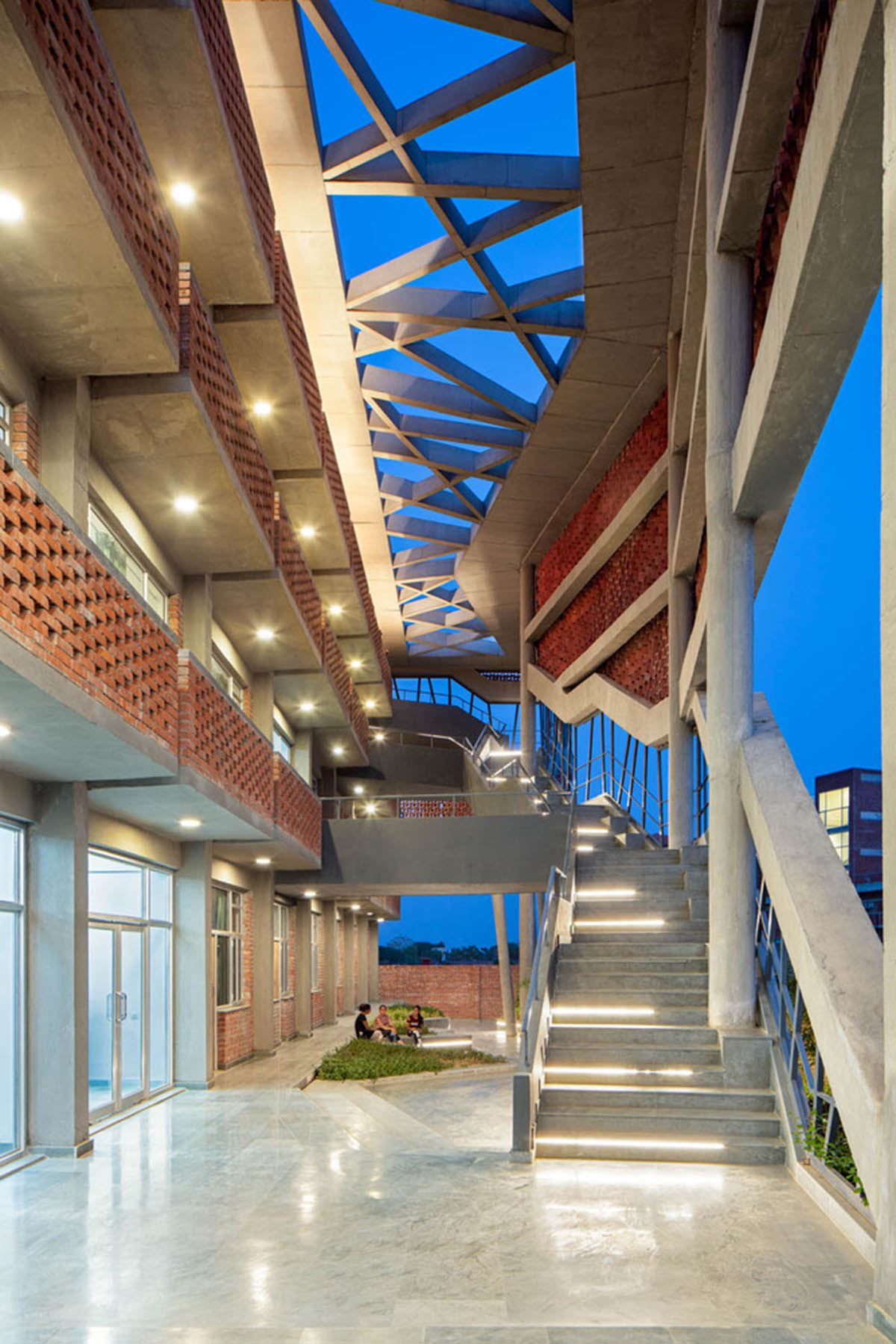 In terms of its sustainability and efficiency, the architects said: "the building is an exemplar of sustainability through its energy efficient design."

Its double-skin façade acts as thermal mass, which helps reducing the incident direct and diffused radiations by 70% on the principal façade, thus, minimizing heat gain within the habitable spaces behind the block wall.

This further reduced the mechanical cooling loads by 35%, a marked increment from the ECBC (Energy Conservation Building Code) base case of public buildings. 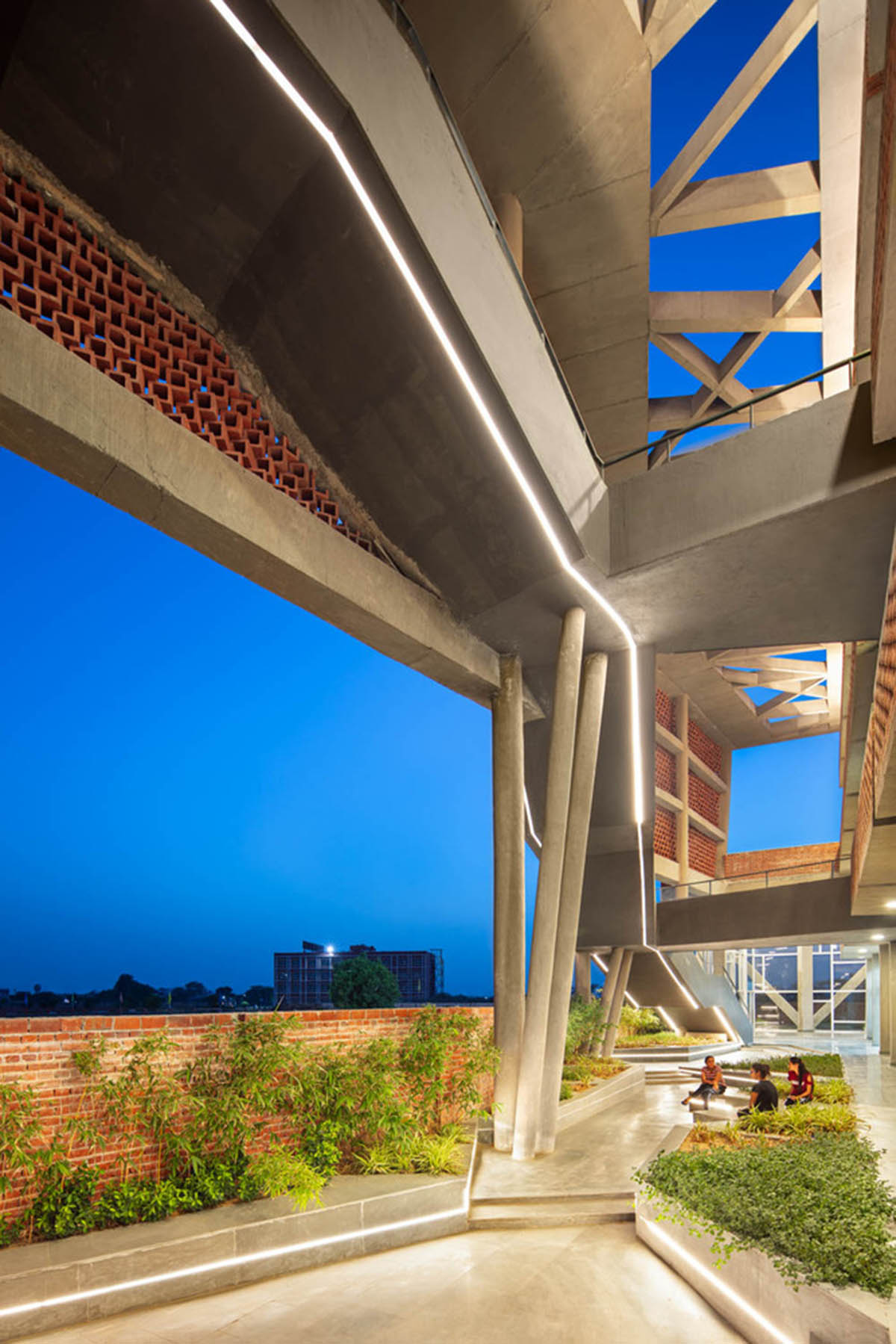 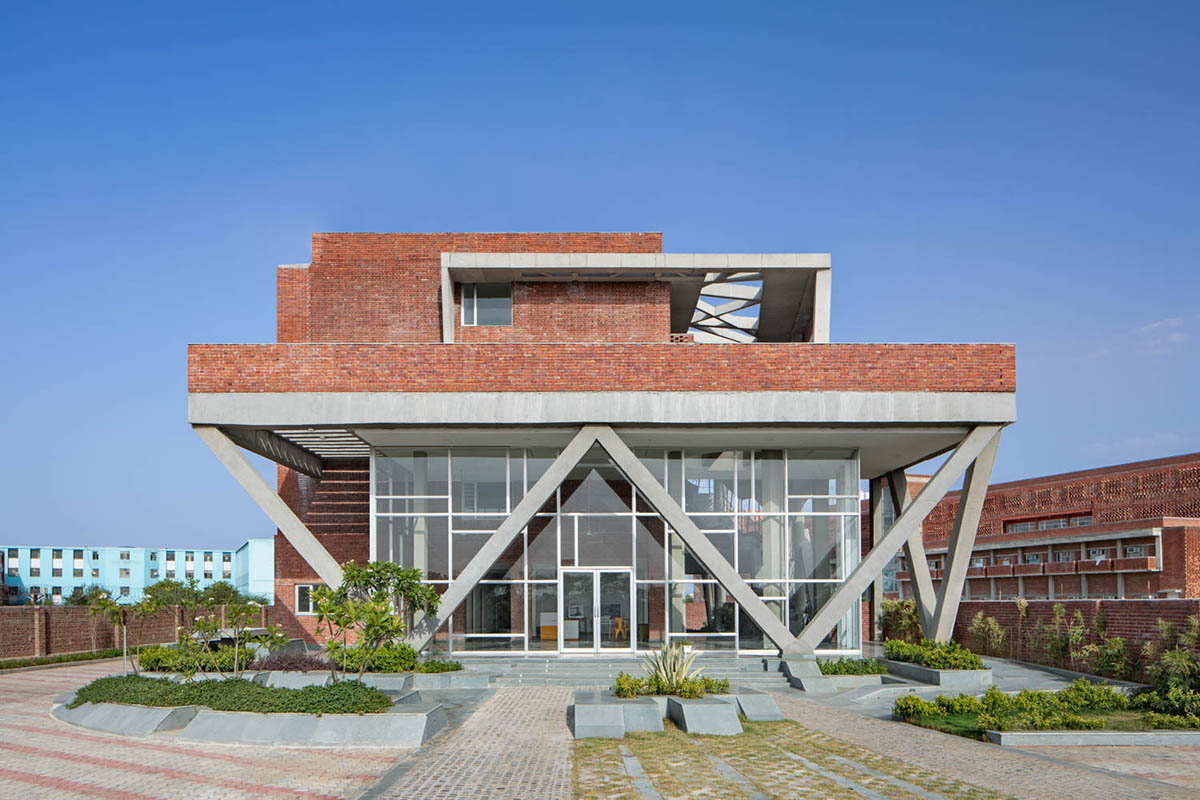 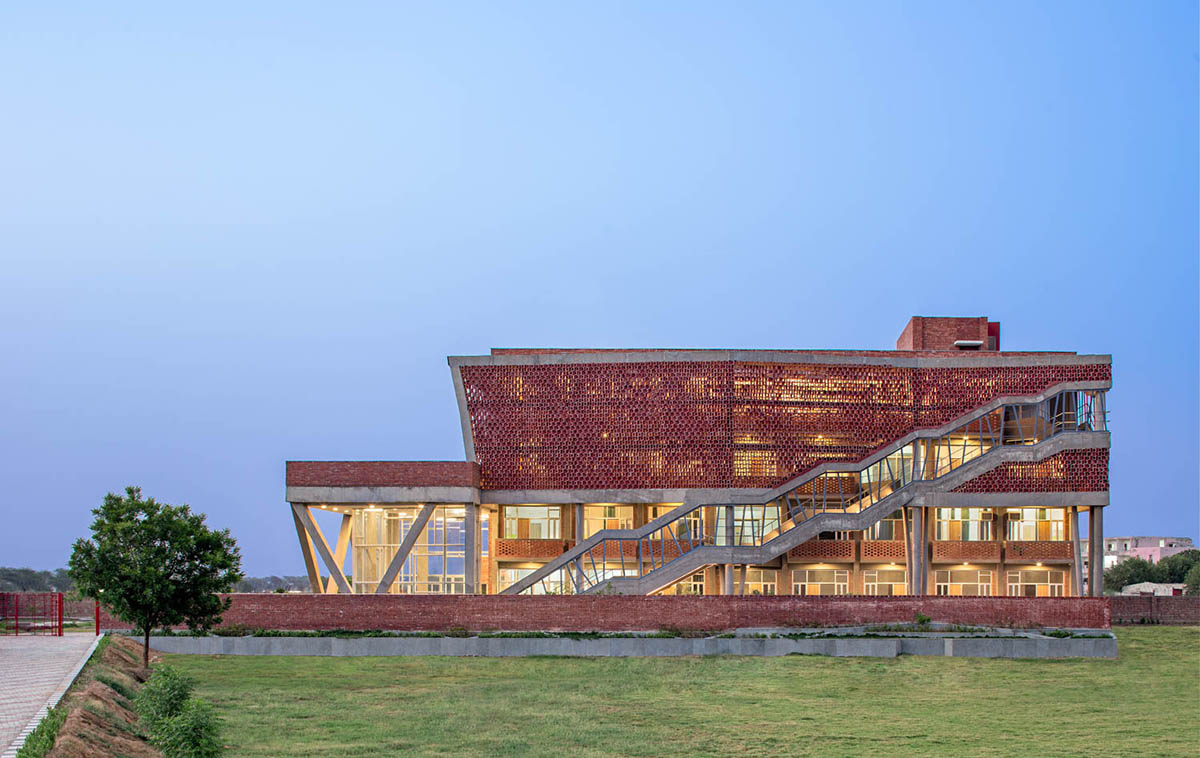 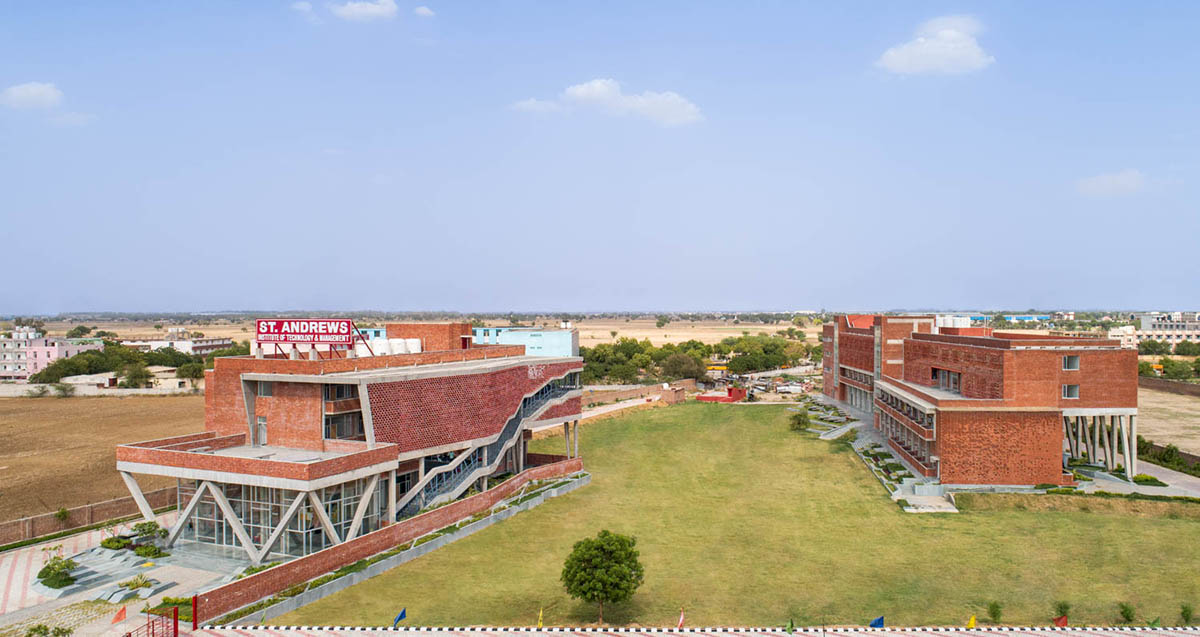 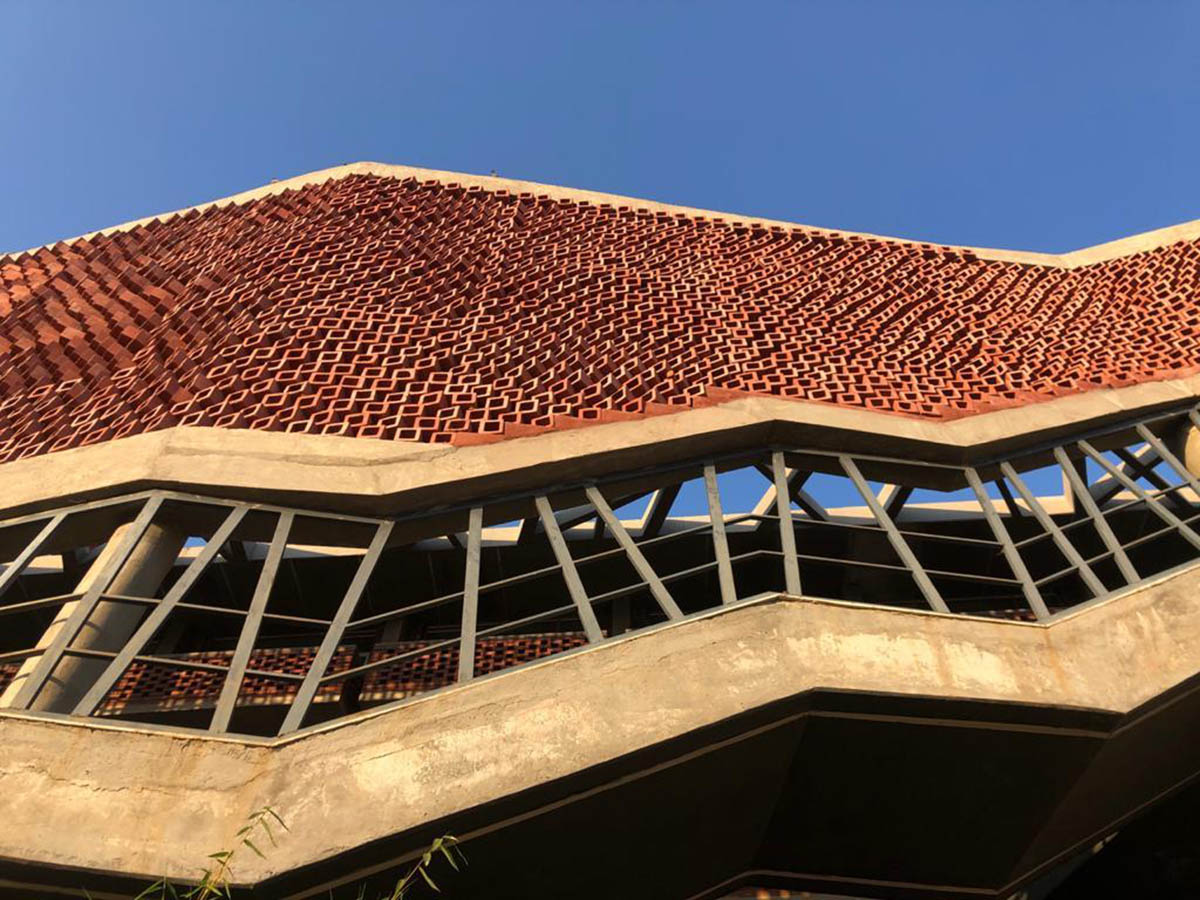 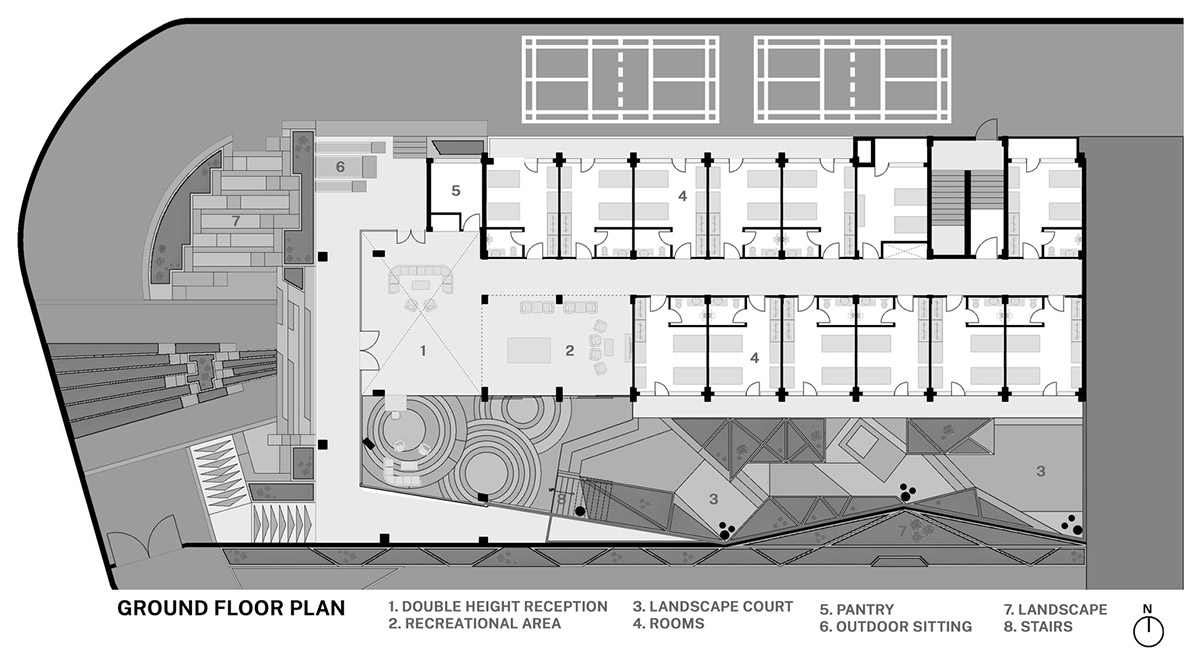 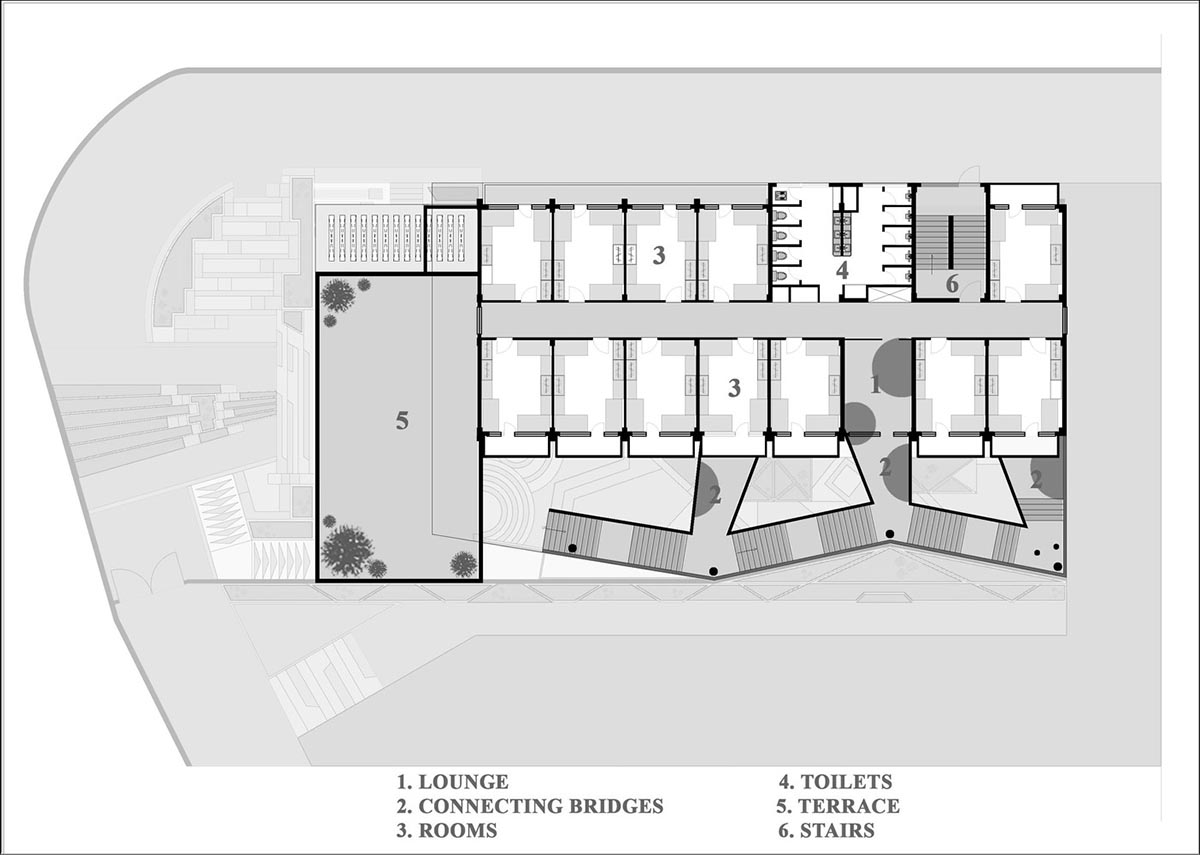 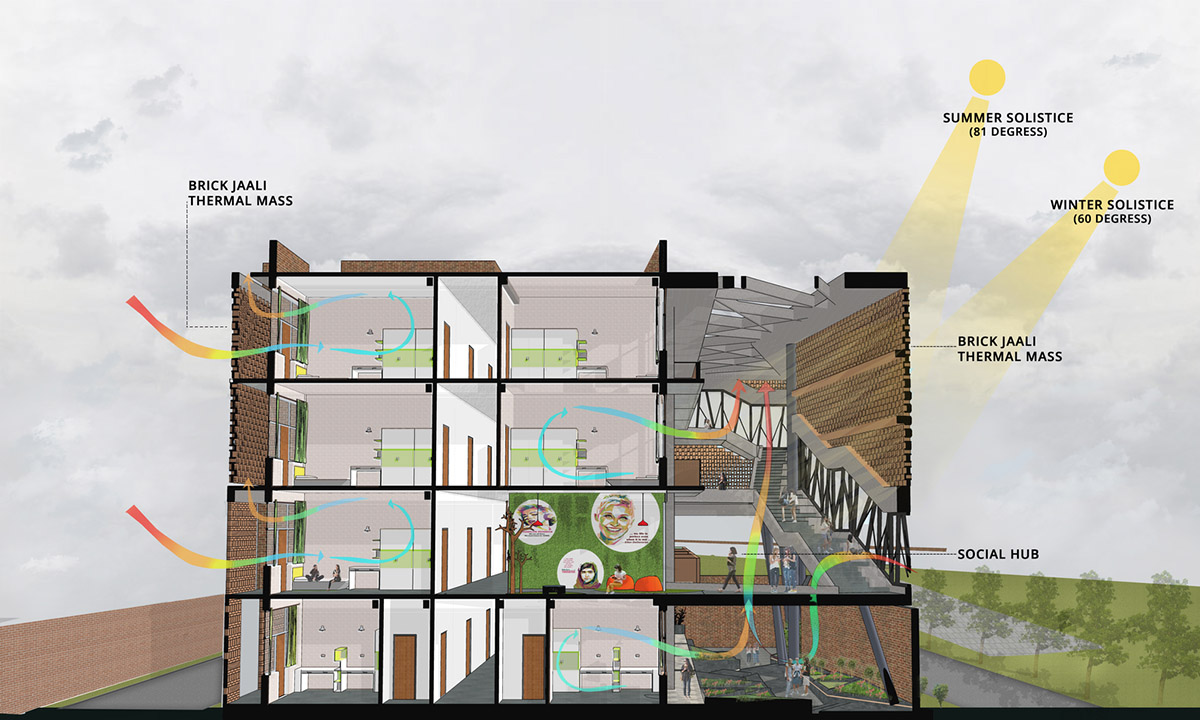 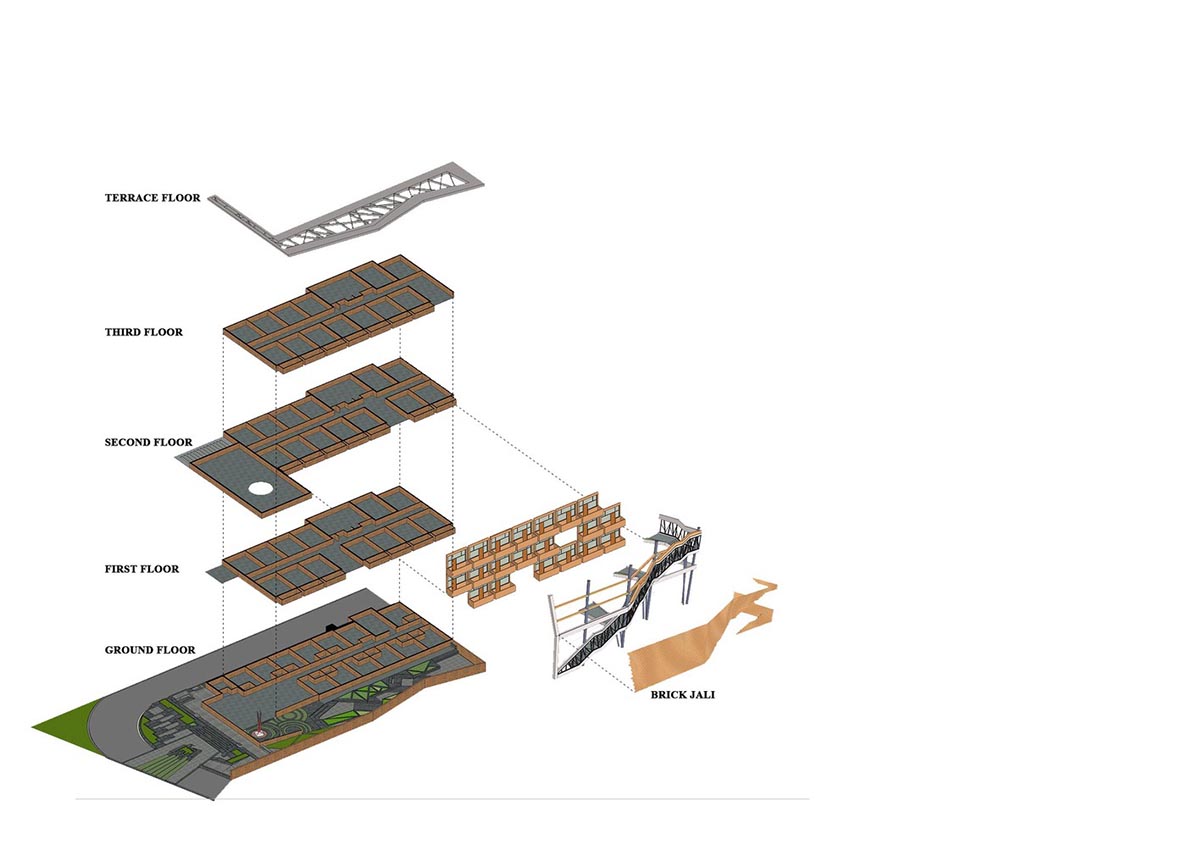 All images © Studio Noughts and Crosses