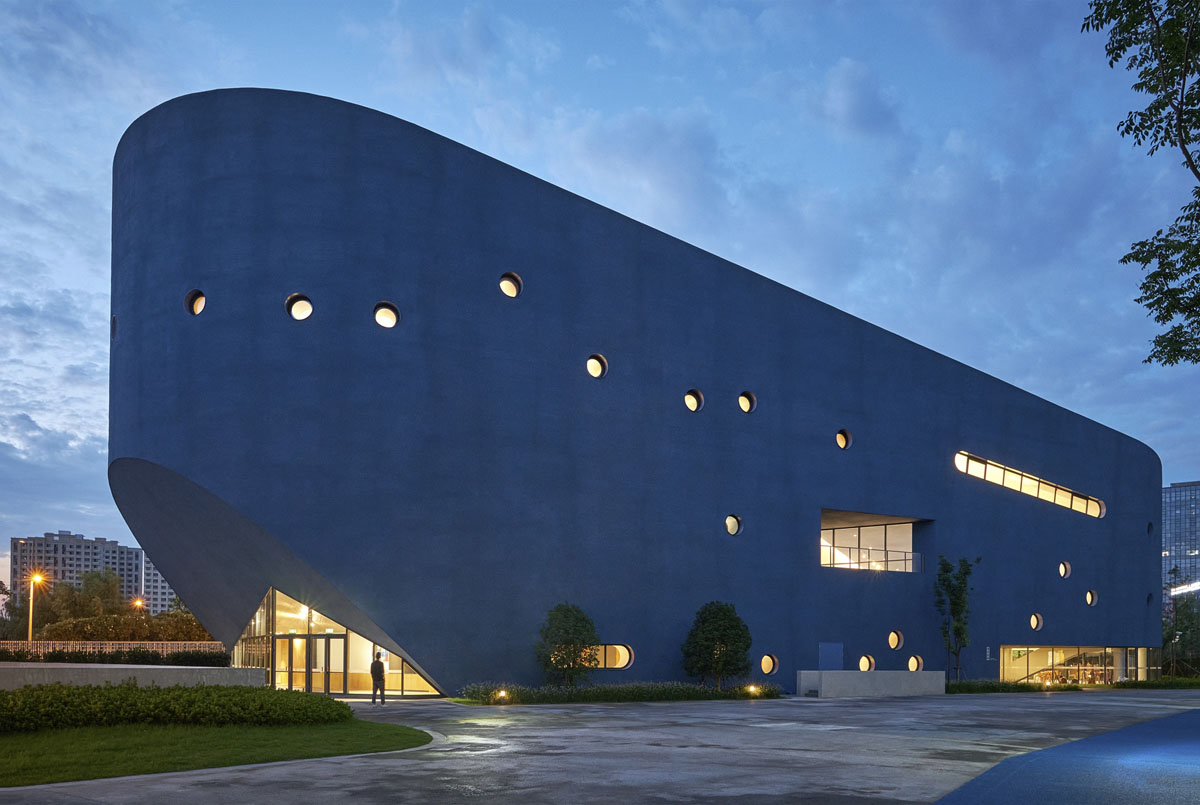 OPEN Architecture has completed a bibliotheater building that resembles a "blue whale" with its open blue skin dotted with different sizes of openings in a village-like campus of Shanghai Qingpu Pinghe International School in China.

Named Pinghe Bibliotheater, the 5,372-square-mere building comprises a 500-seat theater, 150-seat black-box theater, library and café. The architects interlocked together a library, a theater, and a black box like a Chinese puzzle to form this characteristic building that some call "the blue whale" while others see it as an ocean liner.

"The unique form of the building and the free-flowing spaces not only cultivate the students’ interests in reading and performing, but also encourage their imagination to roam freely in the ocean of knowledge," said OPEN Architecture. 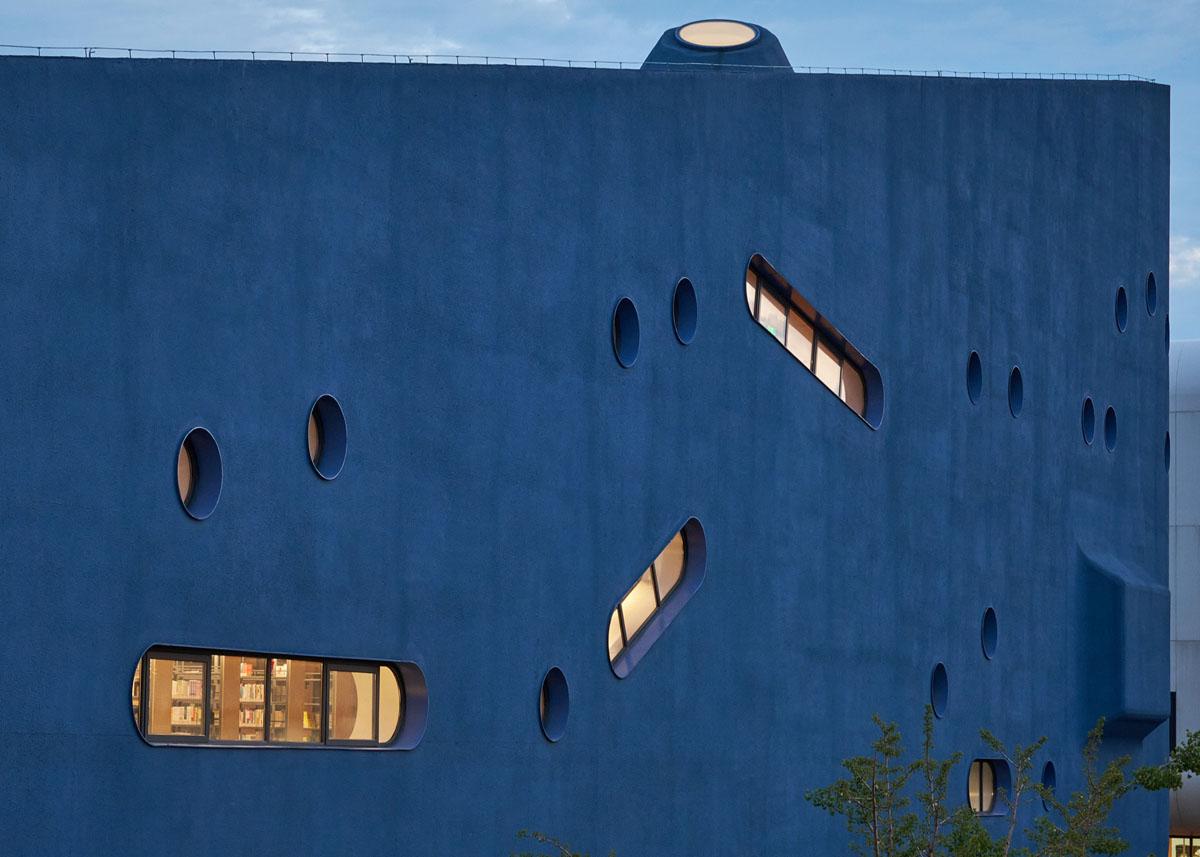 The Bibliotheater sits on an important corner of this school-village, at a junction near which a major city highway and an ancient canal also meet.

The building draws attention with its slanted roof with spiky skylights, ship portholes like round windows, and eye-catching blue color leave a strong impression on passersby. 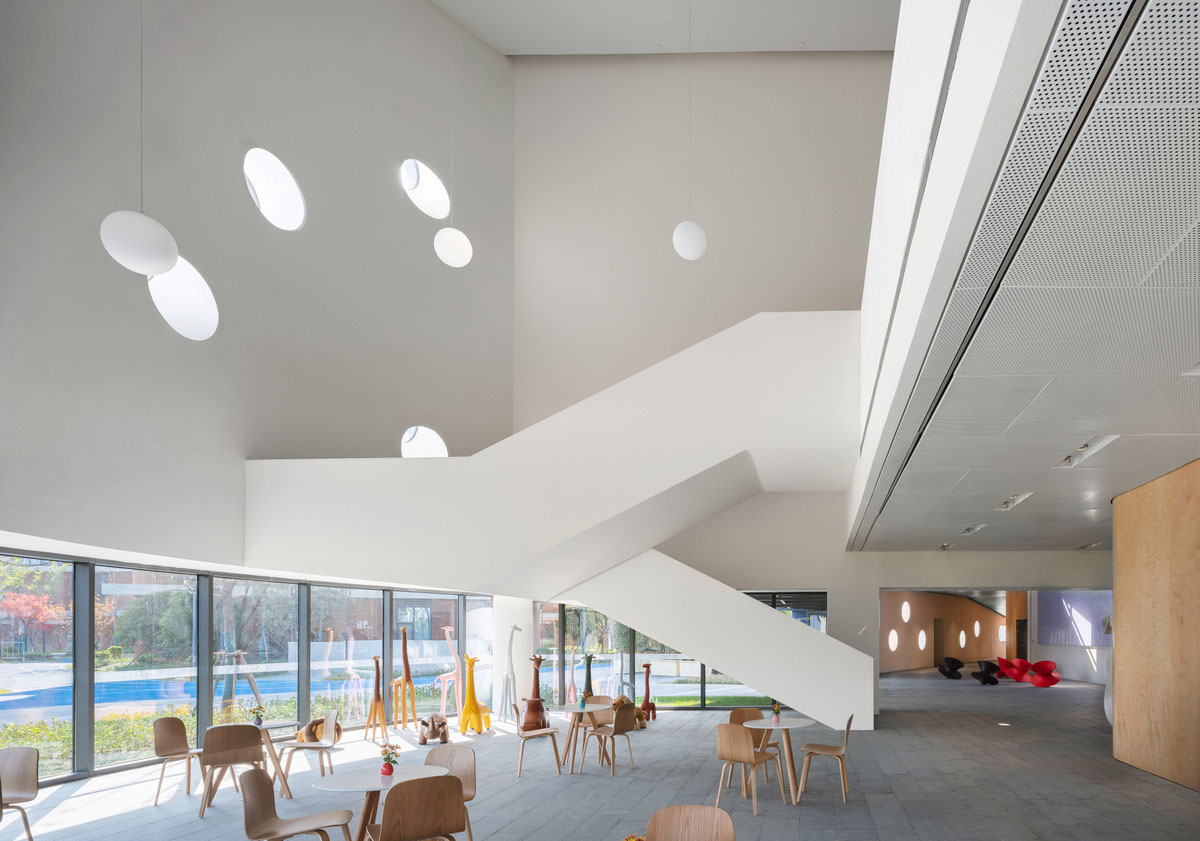 "When we were given the extensive and jumbled-together program of a new school for 2000 students aged from 3 to 18 years, the immediate reaction was how dreadful it would be for a kid spending these many years fixed in one building," said the firm.

"We decided to break away from the current trend of school-as-megastructure."

"Instead, the original program was deconstructed and grouped into many smaller and distinctive buildings, forming a village-like campus."

"The marriage of library and theater came from the architect’s belief that the act of extensive reading and thinking, and the act of expression through performances, should be critical components of education but are often ignored in test-driven educational systems." 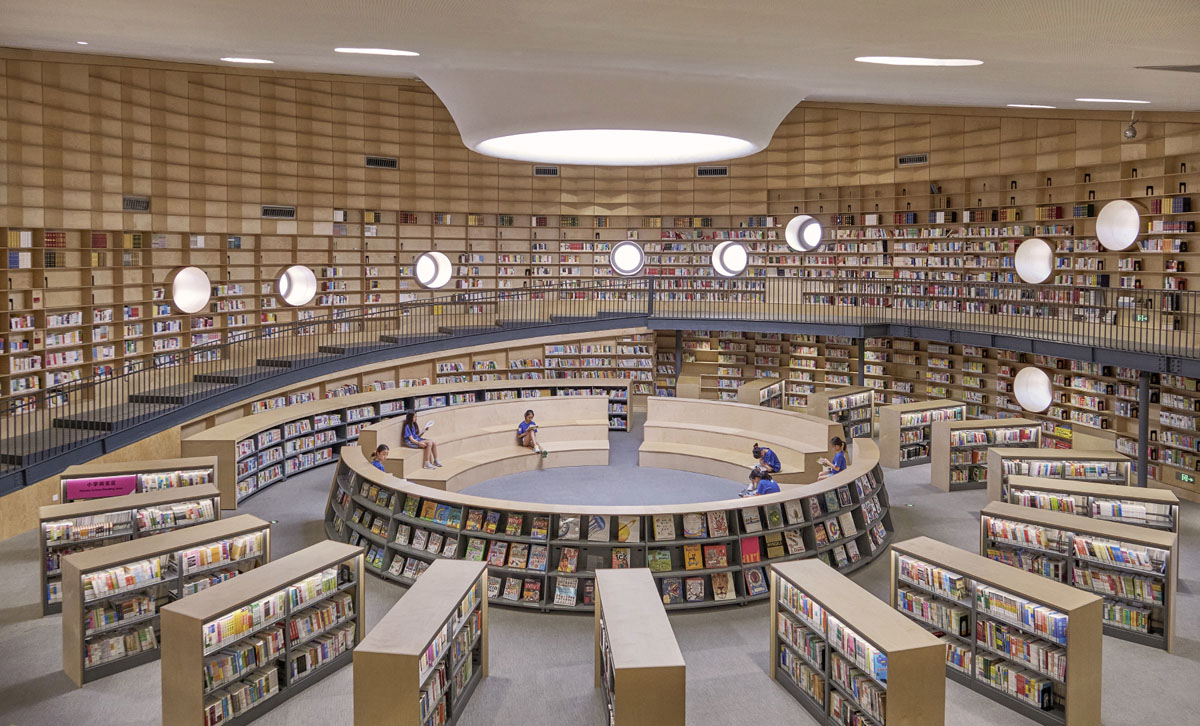 As the architects highlight, the distinctive qualities of these two programs and the respective physical needs came to inspire the design of the building.

The proscenium theater and the black box, these spaces which require the least natural light and the most acoustic isolation, occupy the lower part and the deep central area of the building, while the library occupies the upper part. 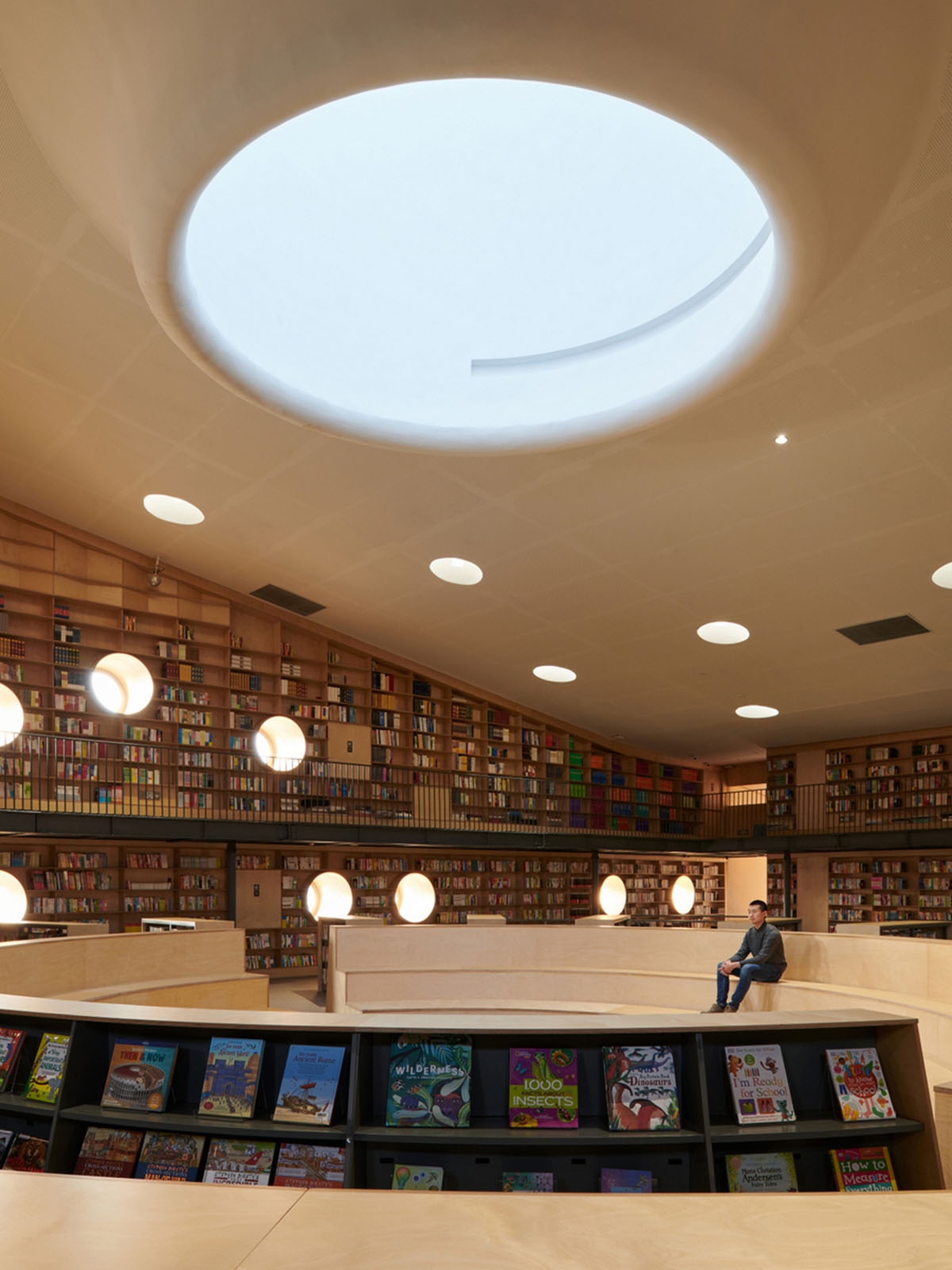 A loop of different reading spaces rises and drops according to the varying heights of the theater volumes below, creating a terraced spatial sequence that climaxes at a central reading area that is surrounded by books and light.

"The experience of reading is inevitably introverted and highly personal," added the studio. "Facing readers from early years to young adults, the architect created many comfortable reading zones of different qualities."

Thanks to a sunken roof garden, it gives kids breathes of fresh air and an outdoor reading area when weather permits. 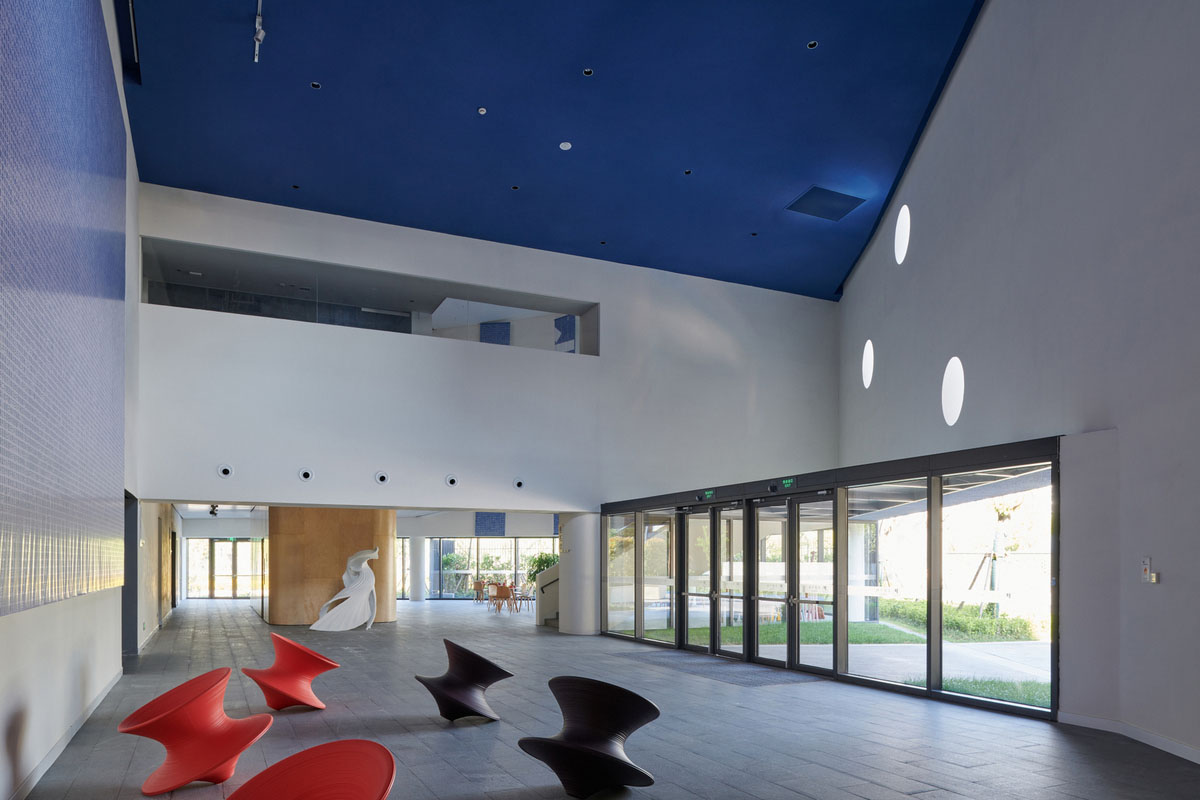 In the building, the experience of performing in theaters, on the other hand, is extroverted and exciting. The main entrance to the theater is where the building is ‘cut’ diagonally to form a theatrical opening.

The juxtaposition of warm wood panels and deep blue walls create a visually stimulating auditorium. The café is situated on the ground floor also plays an important role. During normal school days, parents waiting to pick up kids can read and socialize there. 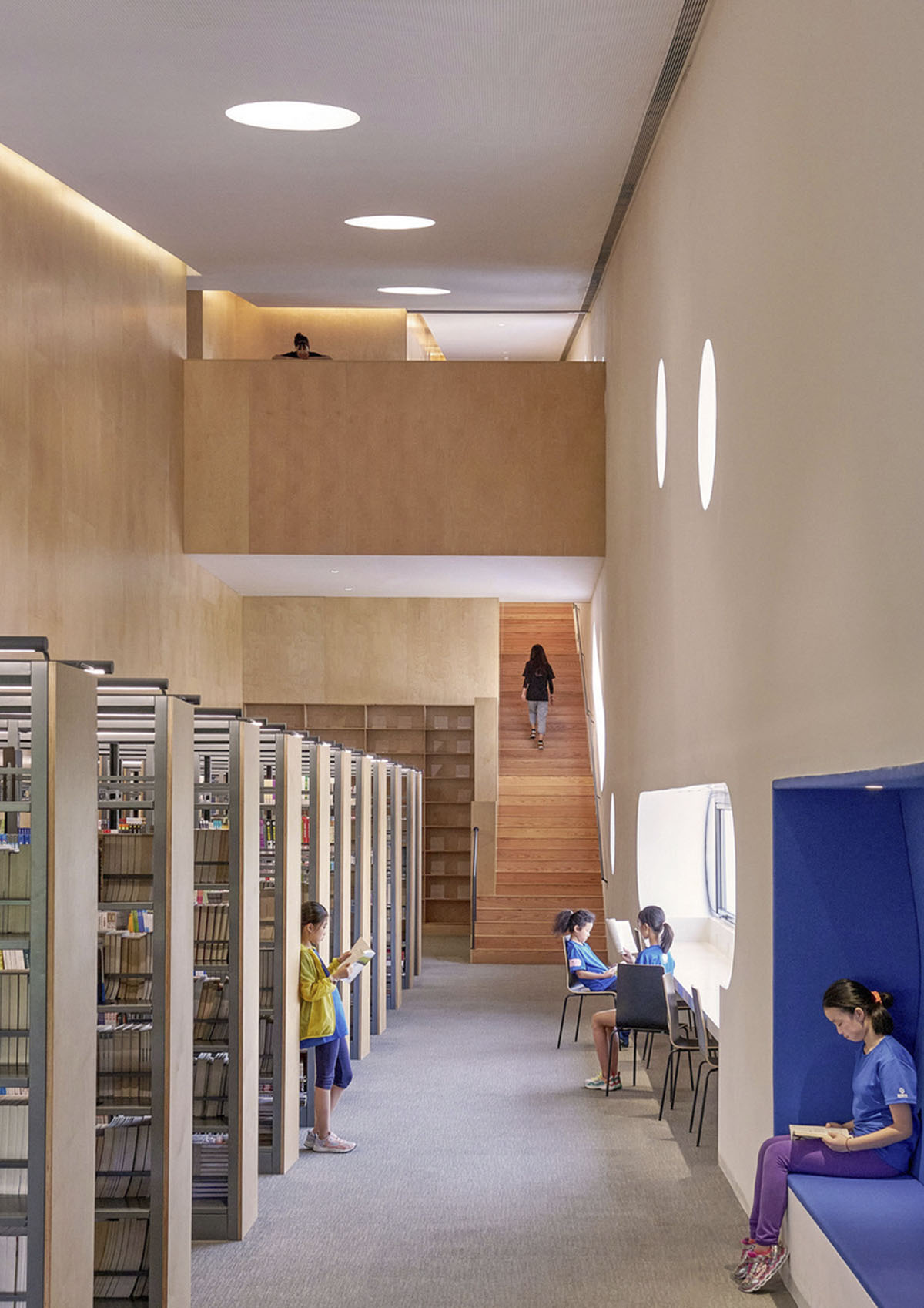 "Light is crucial to the design of the library, not only fulfilling the functional needs but also giving form to the spaces and animating them with musical rhythm," the studio continued.

The building provides abundant skylights on the slanted roof bring filtered light to the central reading area, a giant oculus dropping down from the ceiling illuminates the very center in an almost spiritual way, forming an emotionally charged central space. While in the theater, natural light is avoided entirely, and the architects carefully designed artificial lighting to meet functional requirements. 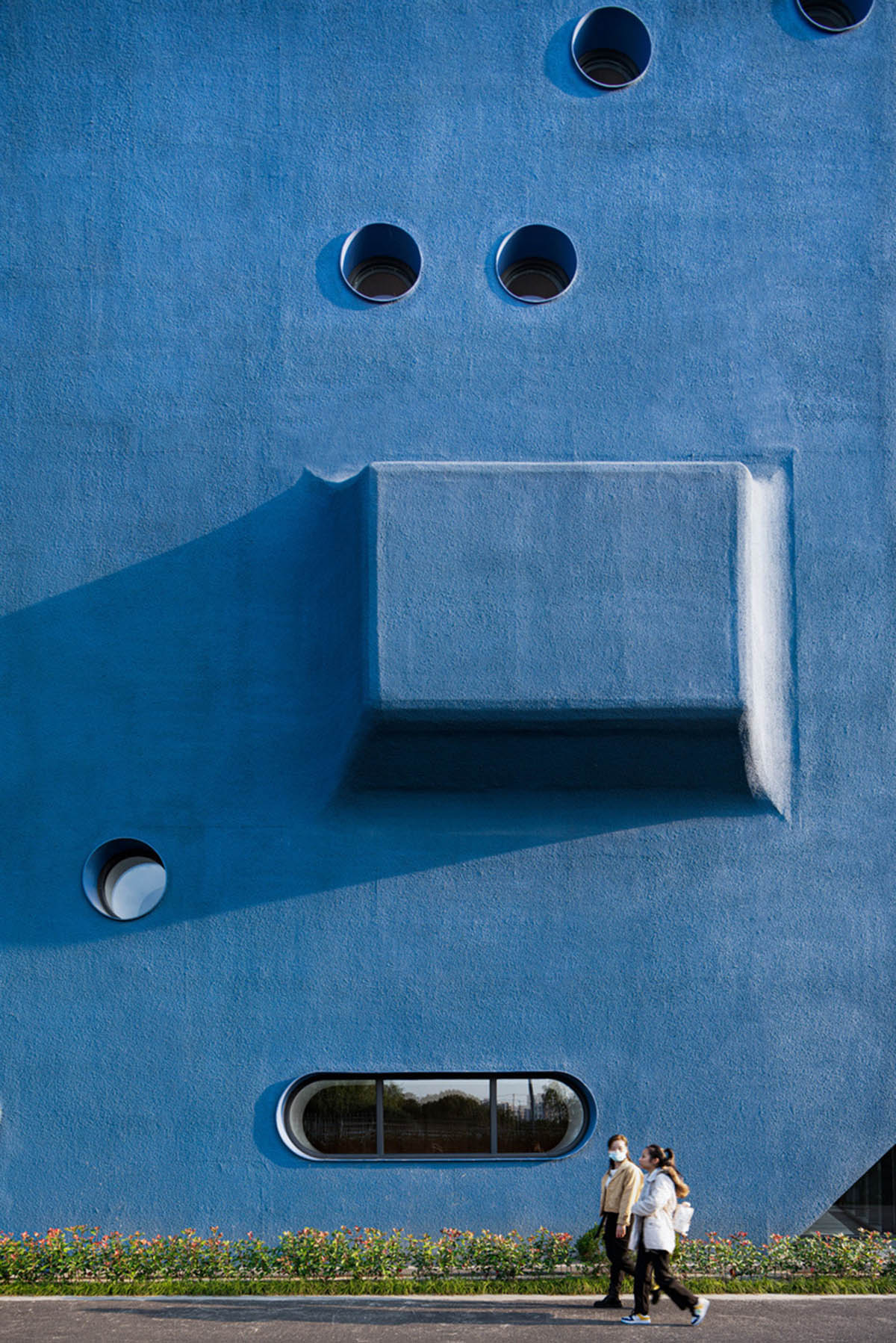 "The Bibilotheater was conceived more broadly as a cultural center for not only the school but also the surrounding communities," added the studio.

"Carefully placed near the secondary entrance of the campus, the building may be used independently without disturbing the campus management."

"It was the architect’s hope that the Bibliotheater will become the social energizer that brings together parents and community members," the firm added. 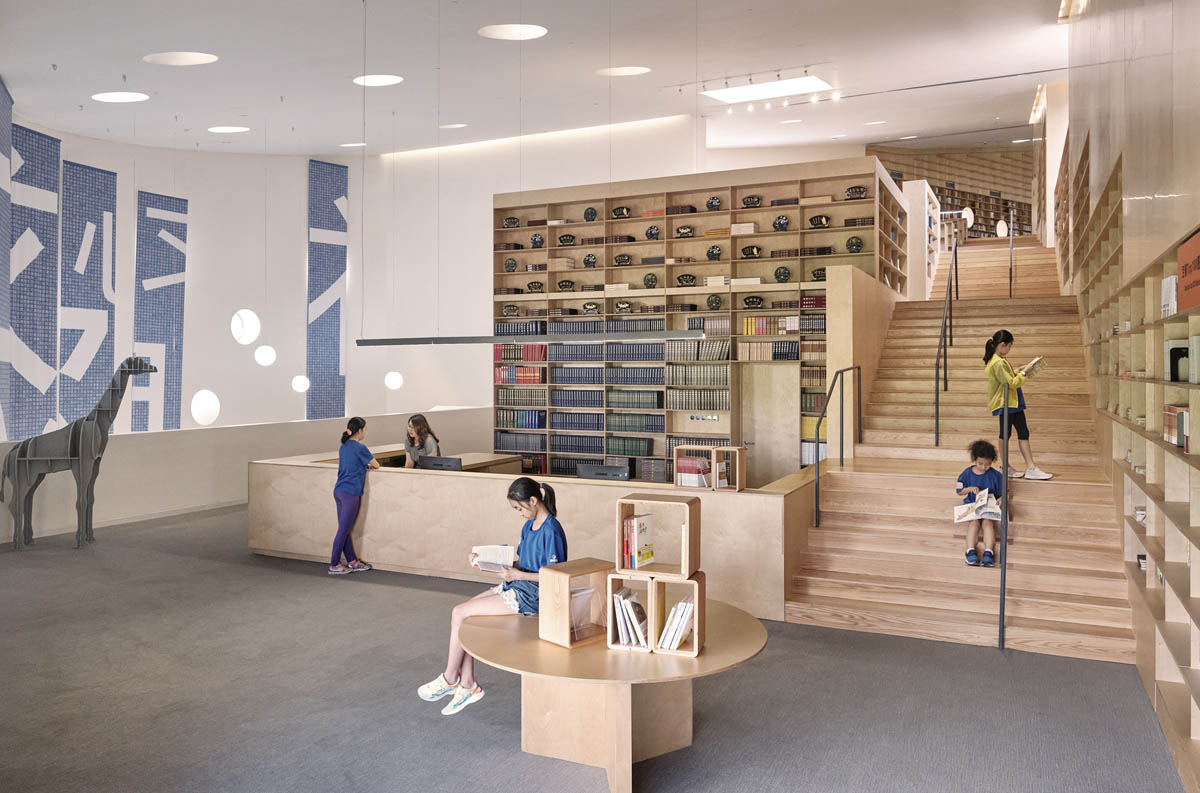 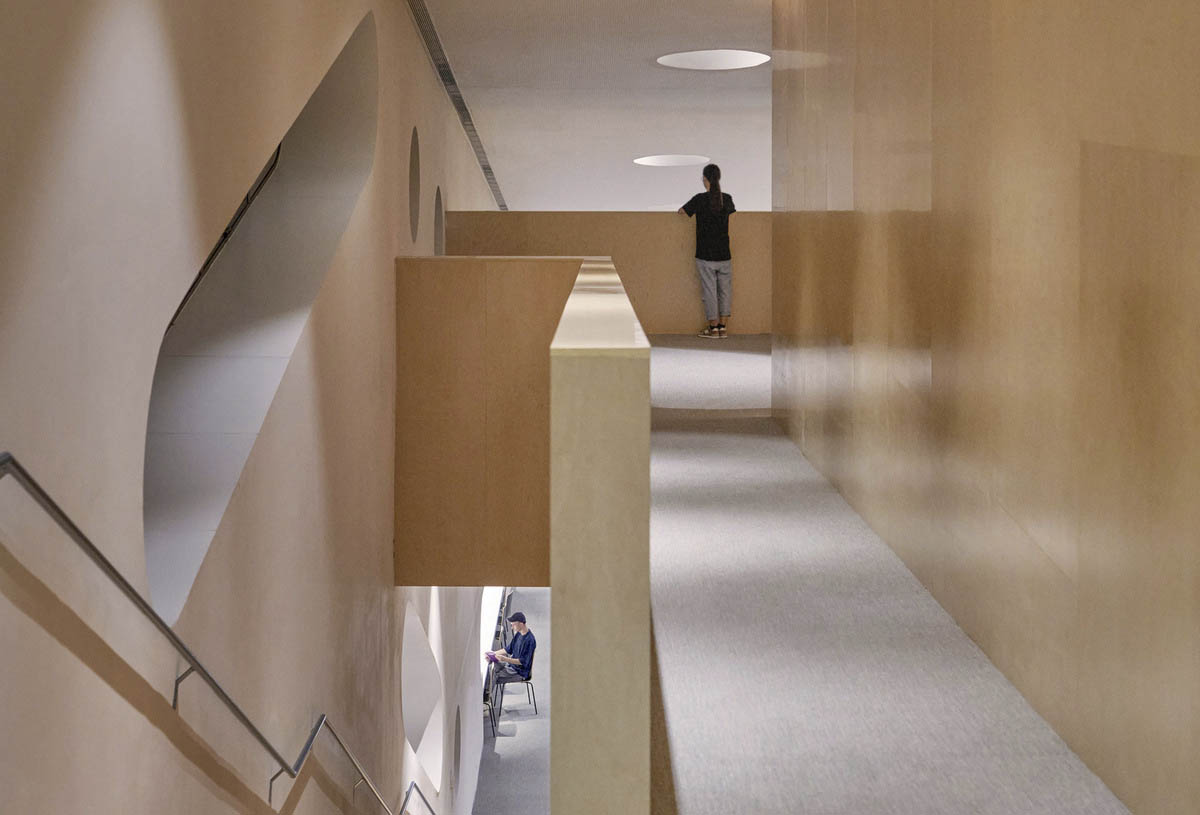 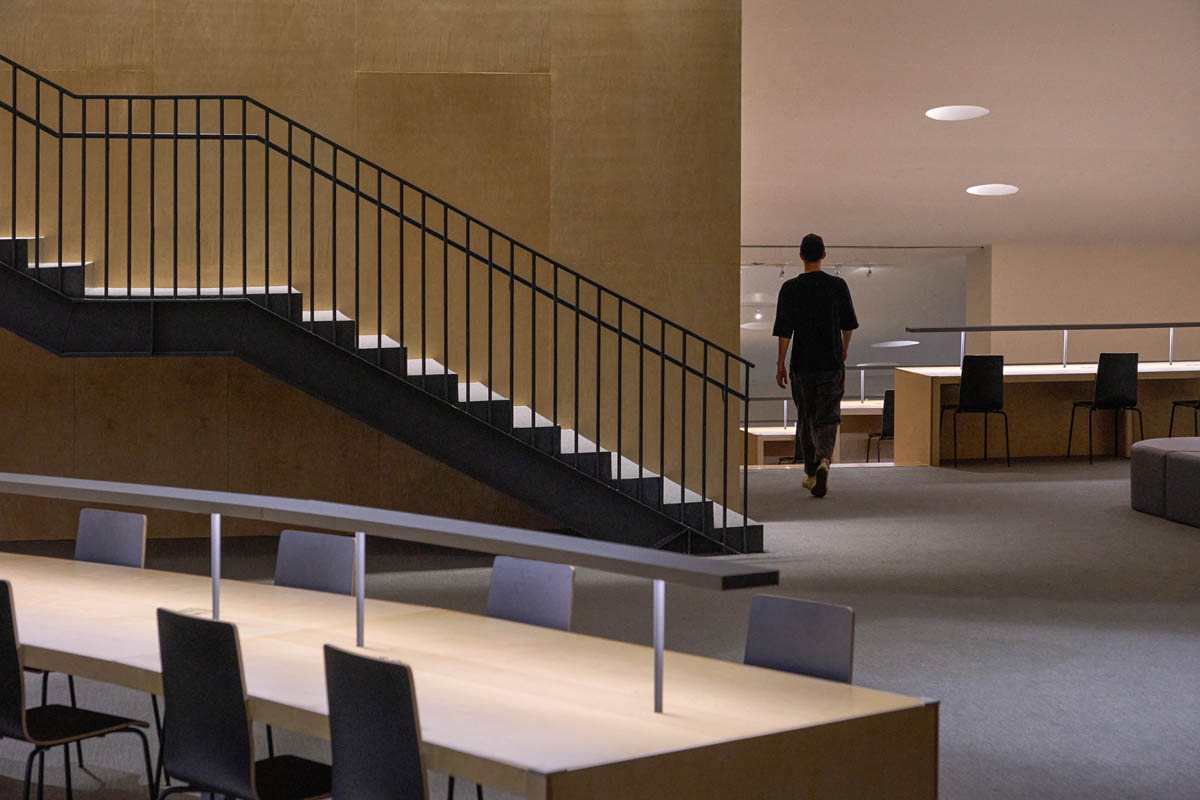 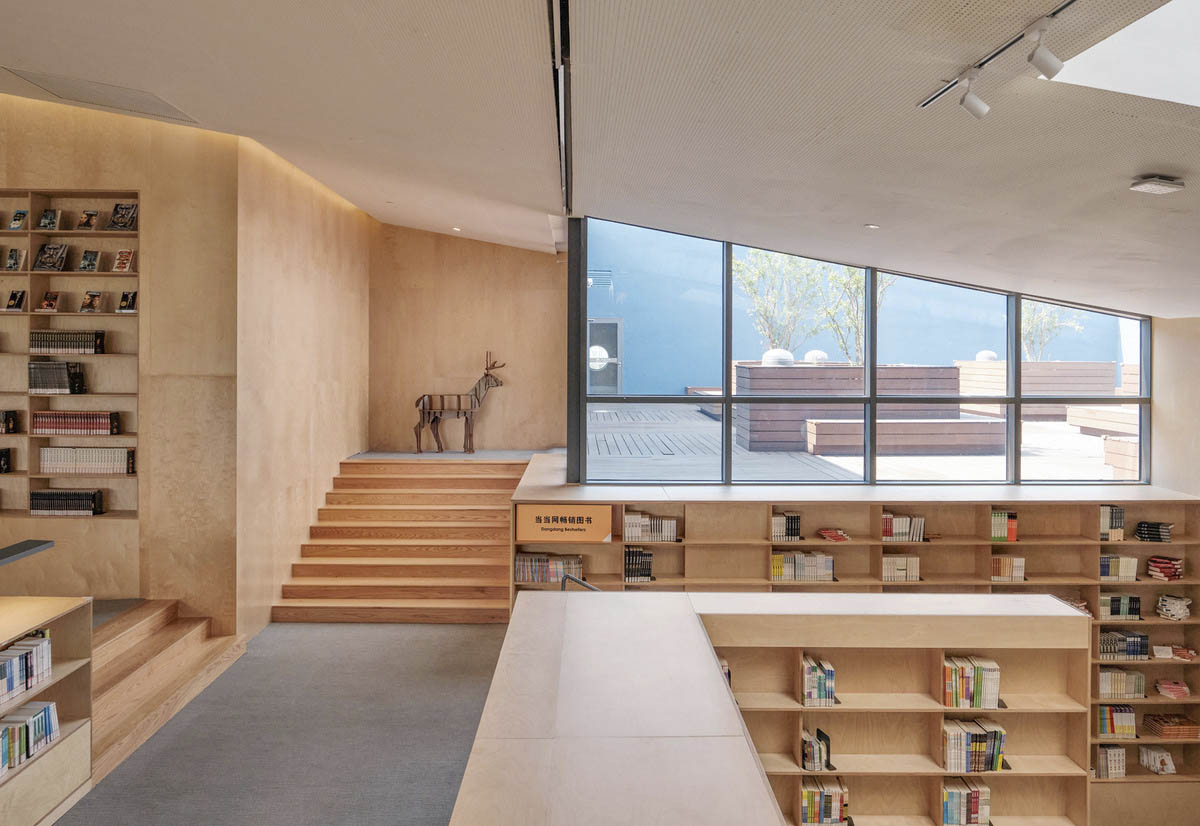 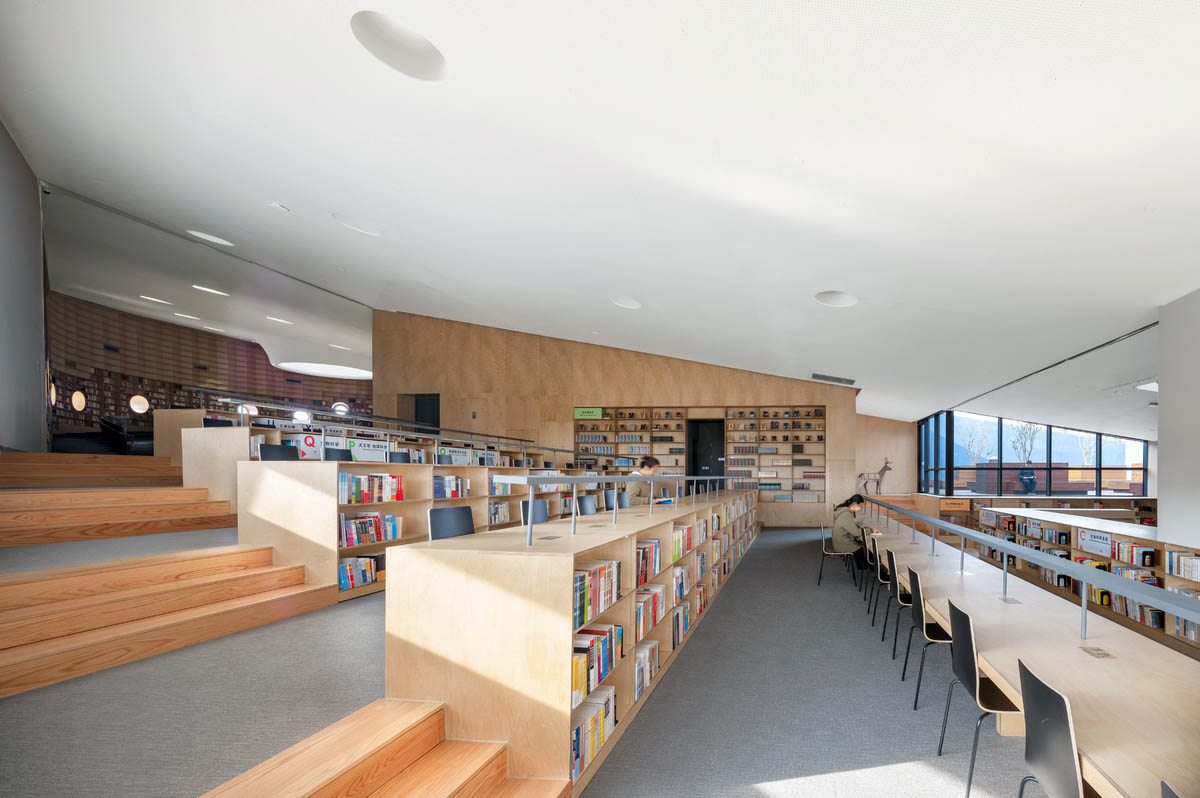 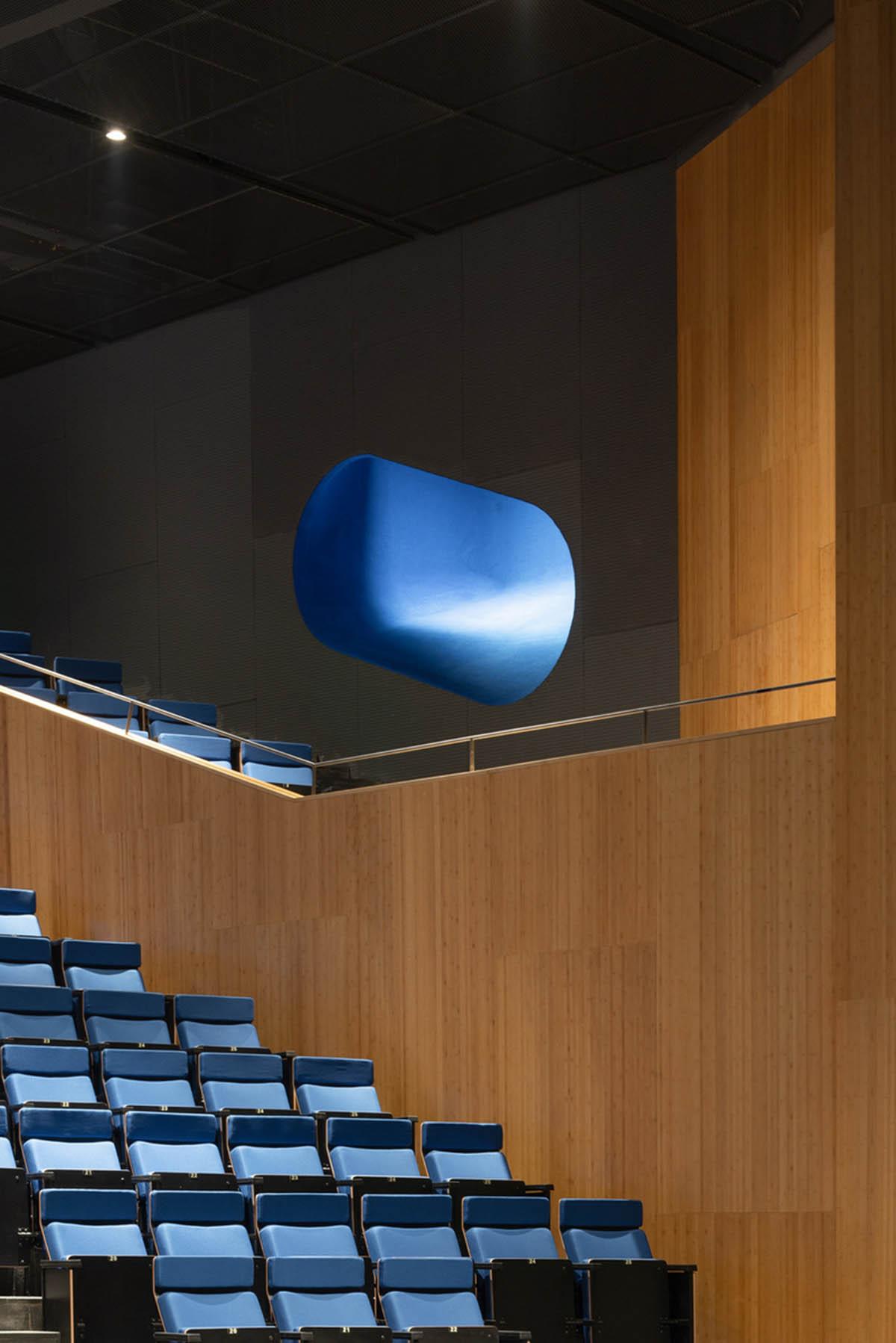 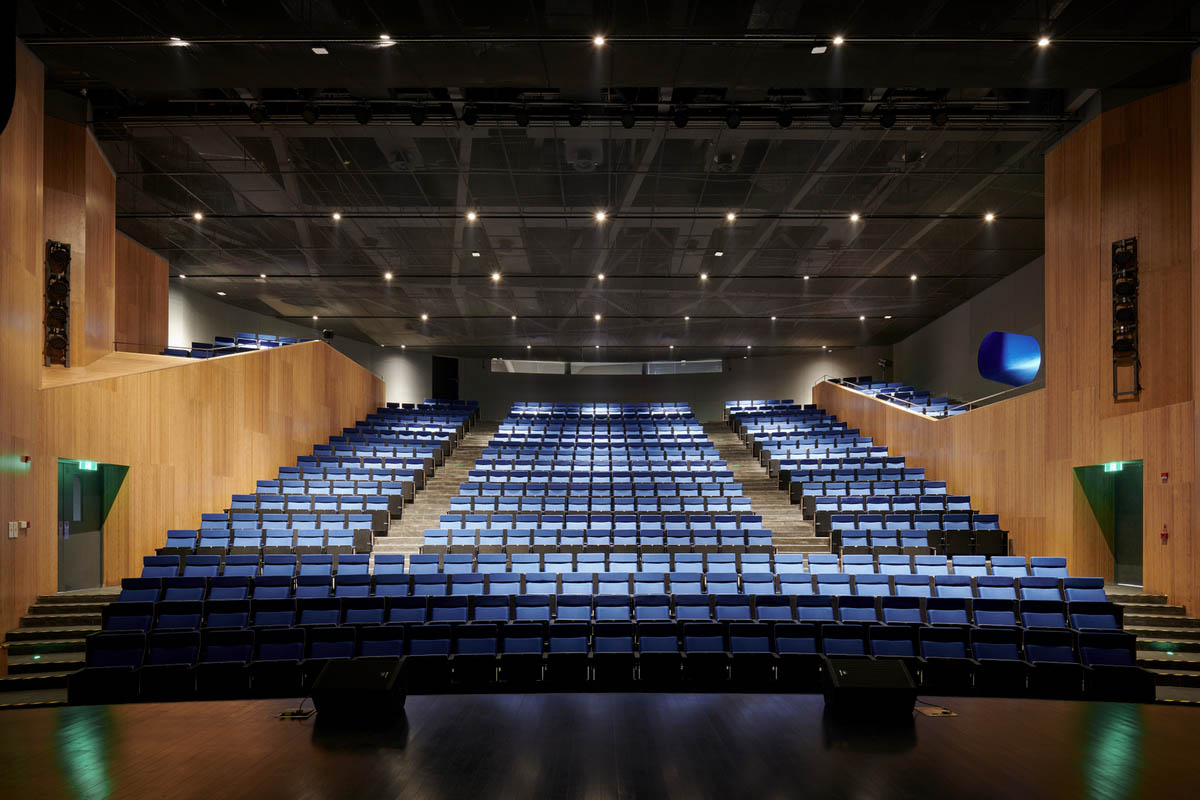 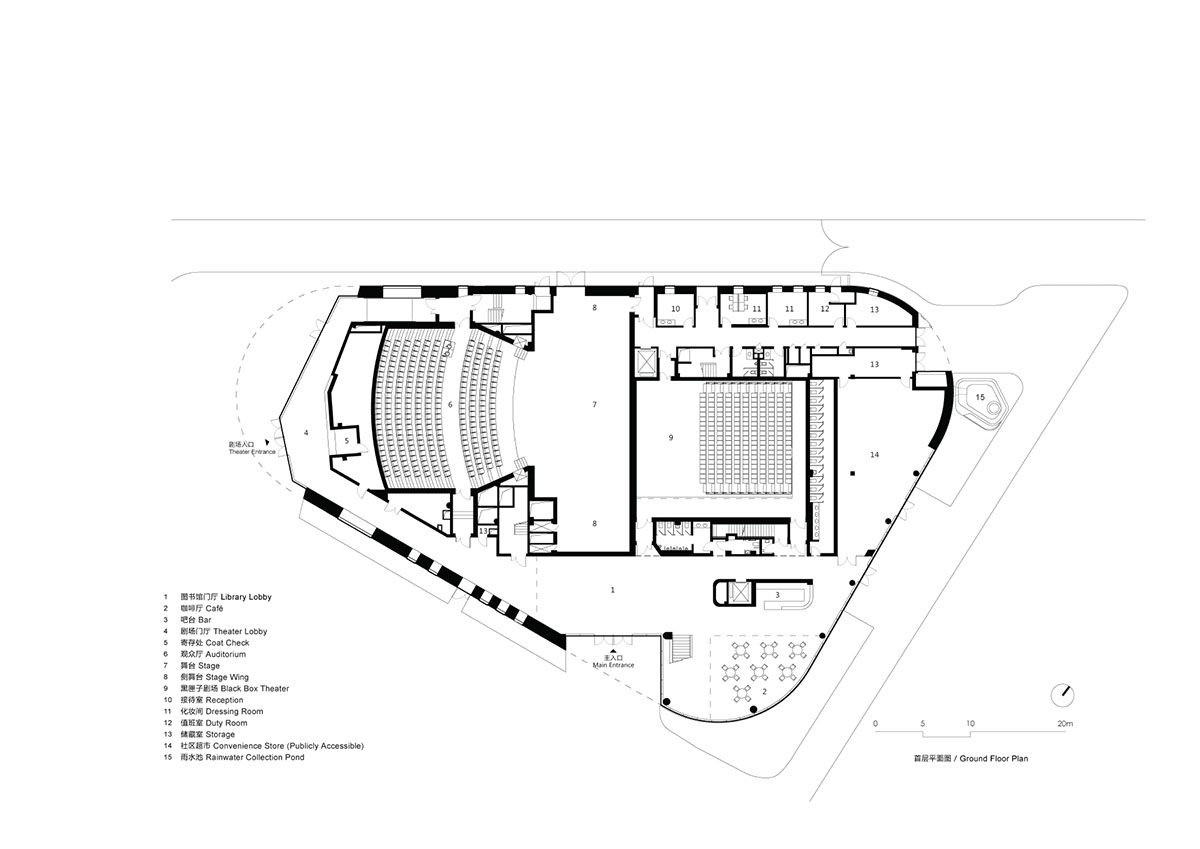 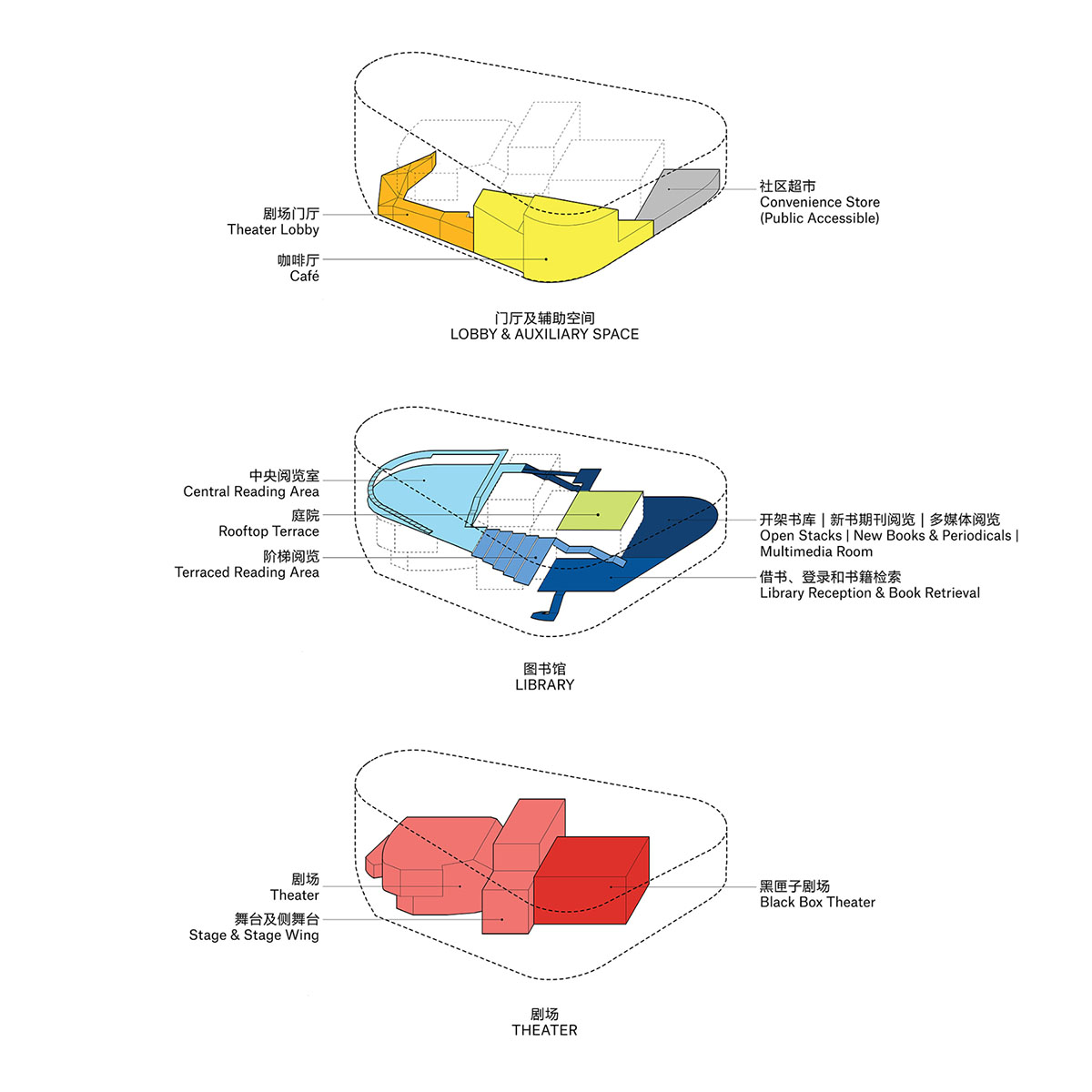