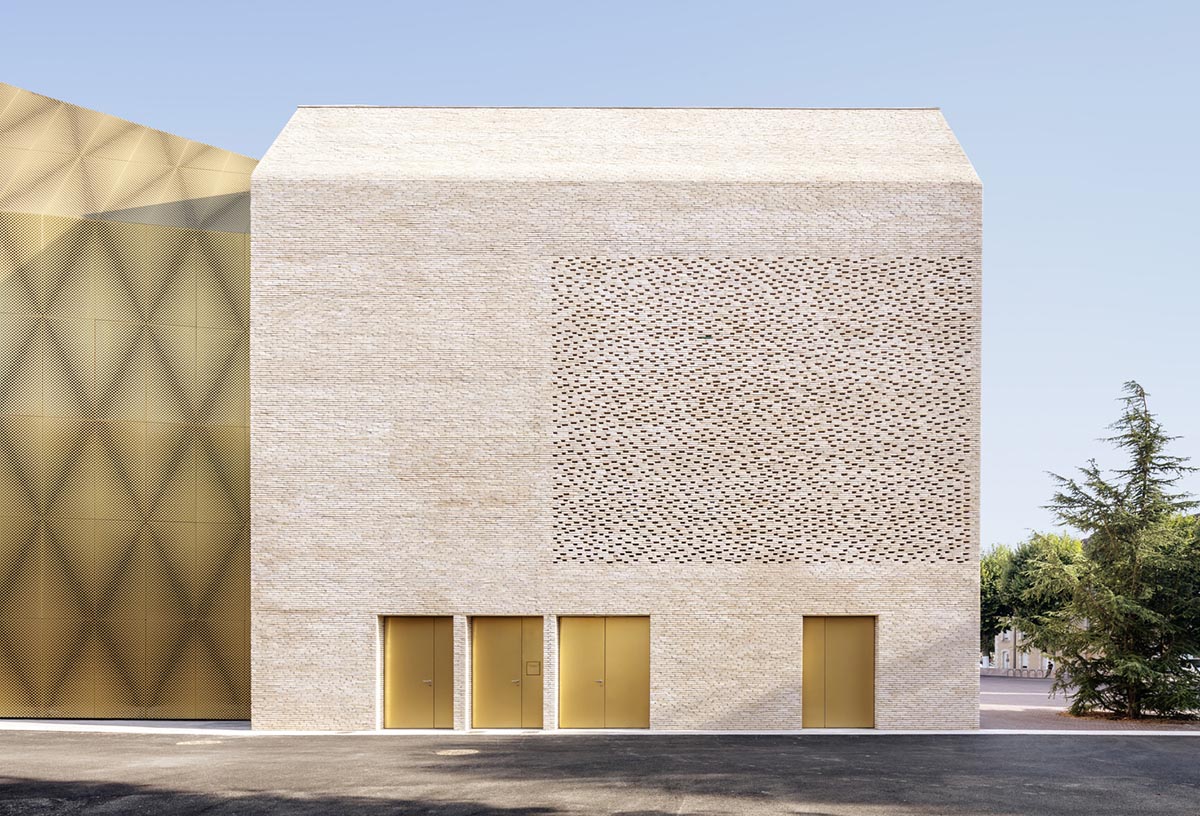 Paris-based architecture studio Antonio Virga Architecte has built a cinema that features a perforated brickwork on its façade to create an interplay of light and shadow and enhance the quality of interiors.

Golden doors, powder-colored outer skin and golden details make the building more vivid, bright and attractive, while keeping minimalism in its own scale.

Called Grand Palais Cinema, the building is located on the north side of the historic center of the town of Cahors in France, the building is a few steps away from the banks of the Lot River. 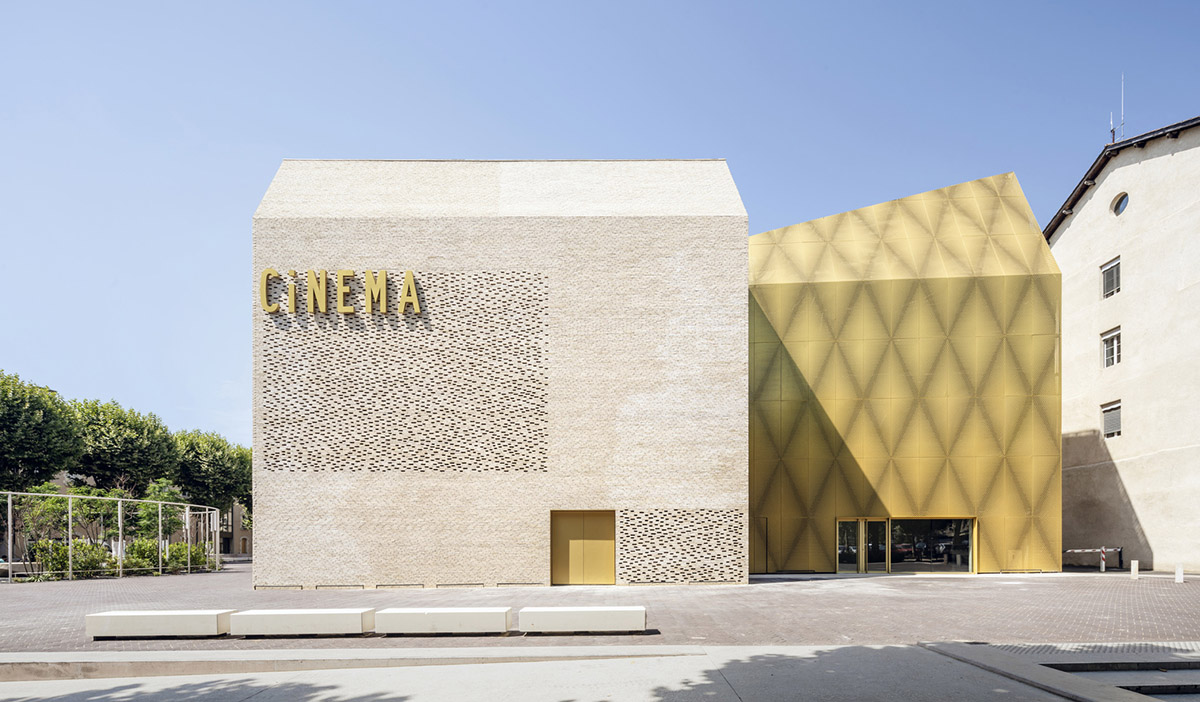 This cinema is situated on a former site dedicated to the army (today renamed Place Bessières). The studio recreated and reinterpreted the symmetry of the preexisting army barracks by occupying the area of the east wing of this complex, which was destroyed by fire in 1943.

The plot previously served as a parking lot, the Place Bessières has been transformed into a broad and welcoming urban space dedicated to pedestrians and protected by an existing canopy of trees. 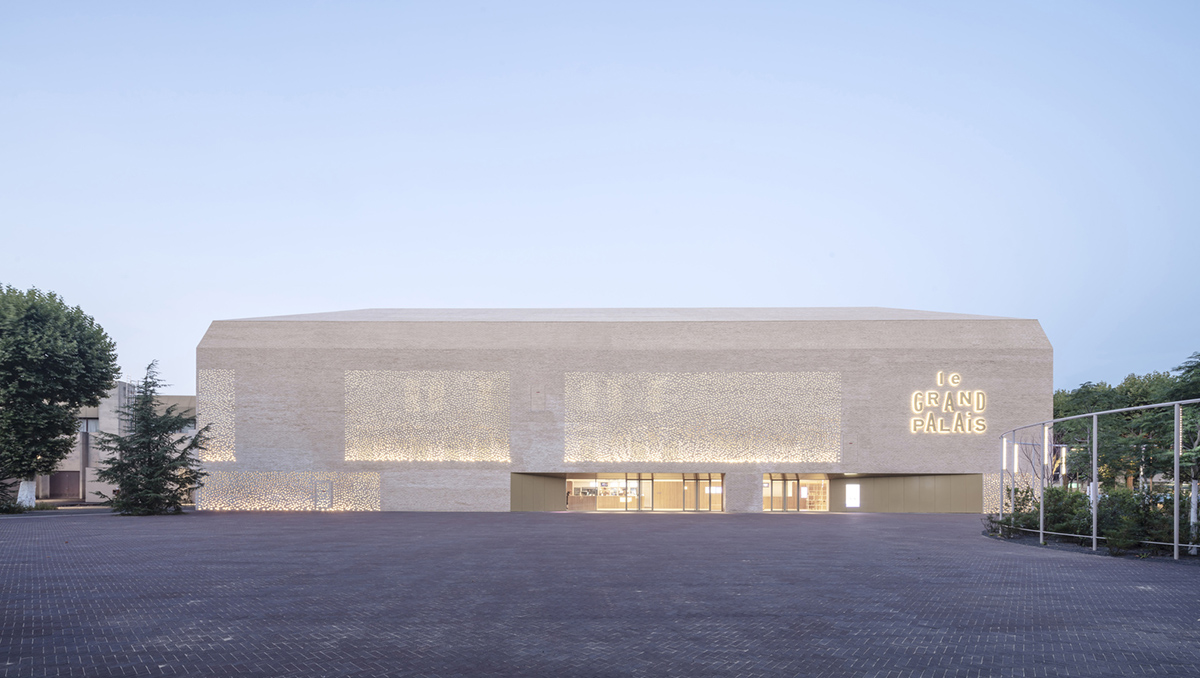 "The square is mostly paved in brick but benefits from a densely green area at the center called "the oasis"," said the architects.

"The Museum of the Resistance, previously housed in a building on this site which was demolished to make way for this project, will be located on the building’s top level with an entrance clearly separate from the cinema."

"The buildings and adjacent outdoor areas are organized according to a rigorous, harmonious, and level layout, in keeping with the practices governing the 19th-century military and public facilities," added the firm. 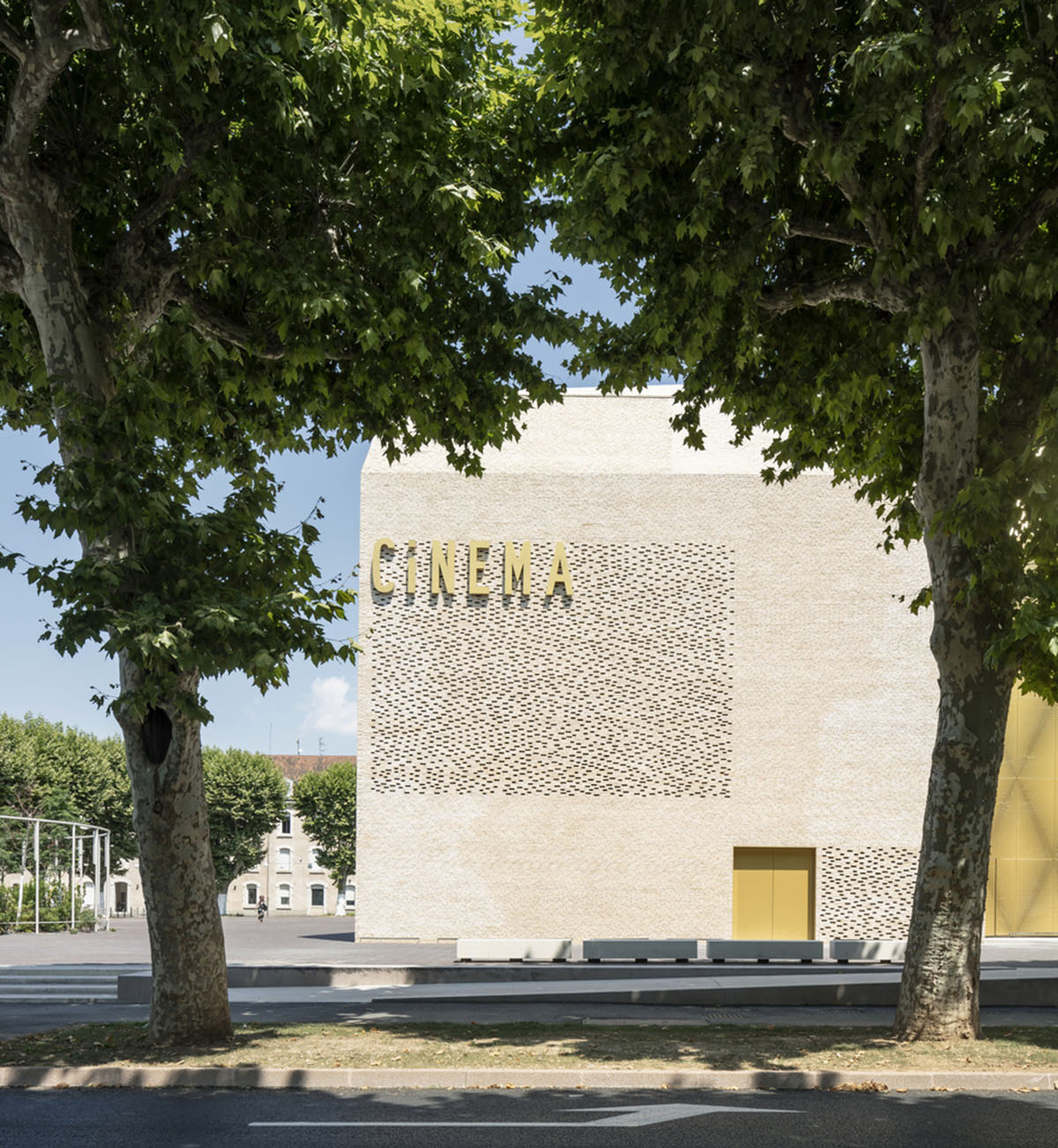 The studio aimed to fulfill of restoring their former scale, this group of spaces is treated with simplicity and unity of materials, furniture, and greenery. 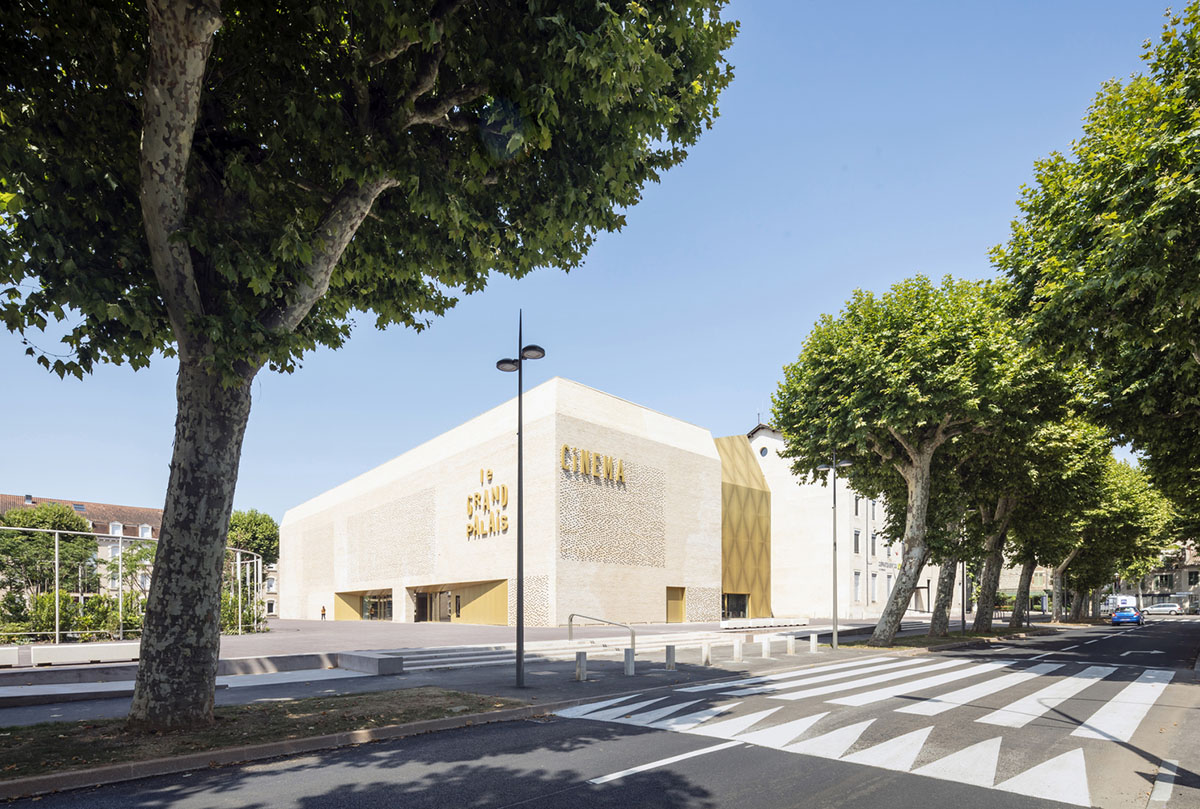 By creating a monolithic volume, the building reveals awe-inspiring façades, but on the upper floors, it is surrounded by a machrabiya composed of little perforations that lighten the façade and intrigue from a distance, attracting viewers toward its environment.

As the studio highlights, the intricate alternation of solids and voids serves a functional purpose. 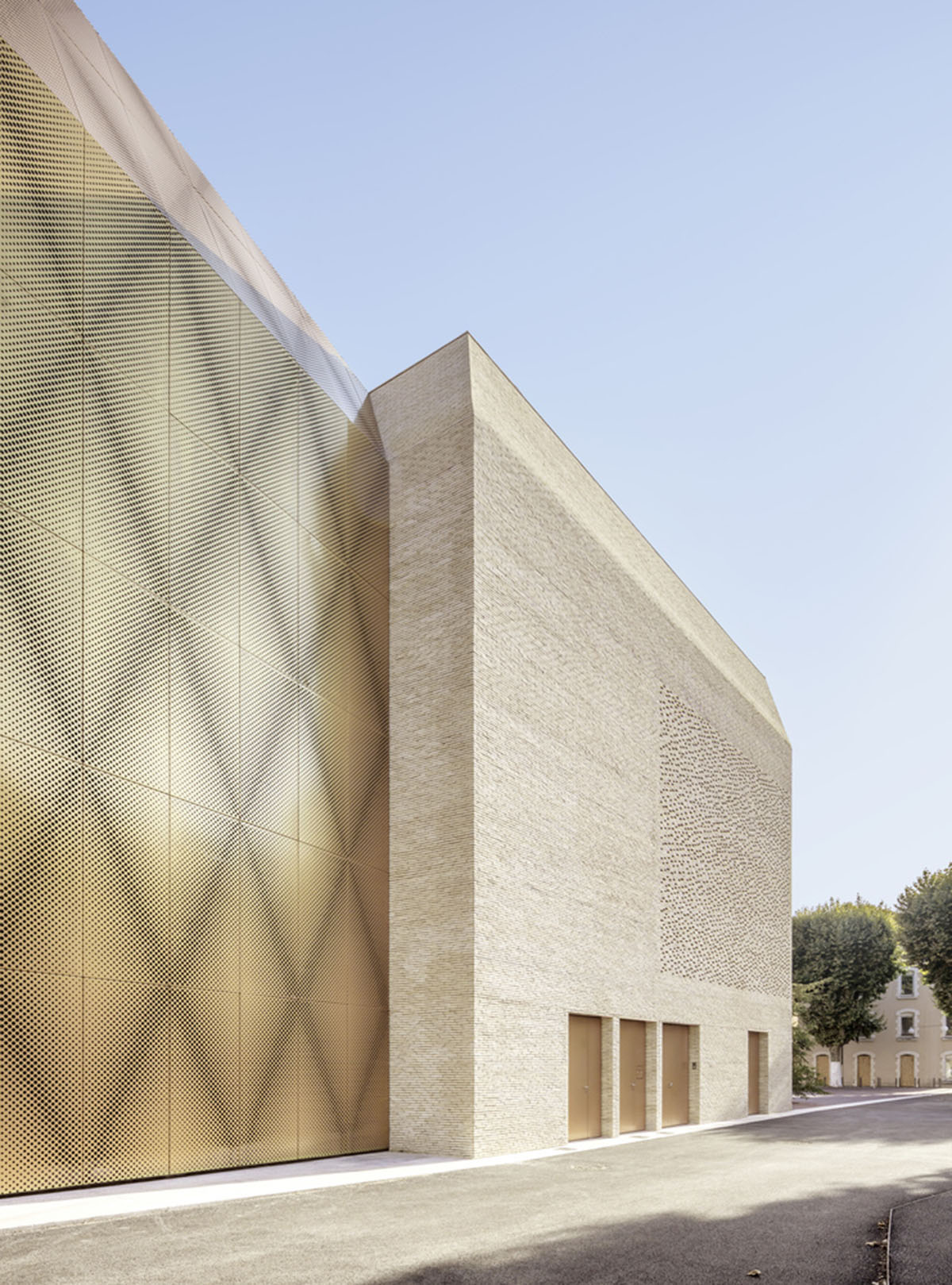 "The perforated skin enlivens the interior spaces during the day thanks to the penetrating light and the interplay of light and shadow whereas, at night, the façade creates a screen of tiny shimmering lights," the studio continued.

"The architect’s search for a powerful contemporary aesthetic seeks to carry the architecture of the cinema beyond the simple objective of recreating the morphology of the former barracks."

The building is divided into two distinct, methodically created, and visually highlighted volumes: one built of brick and the other of perforated and gilded metal, each one playing a very precise role in relation to the public space. 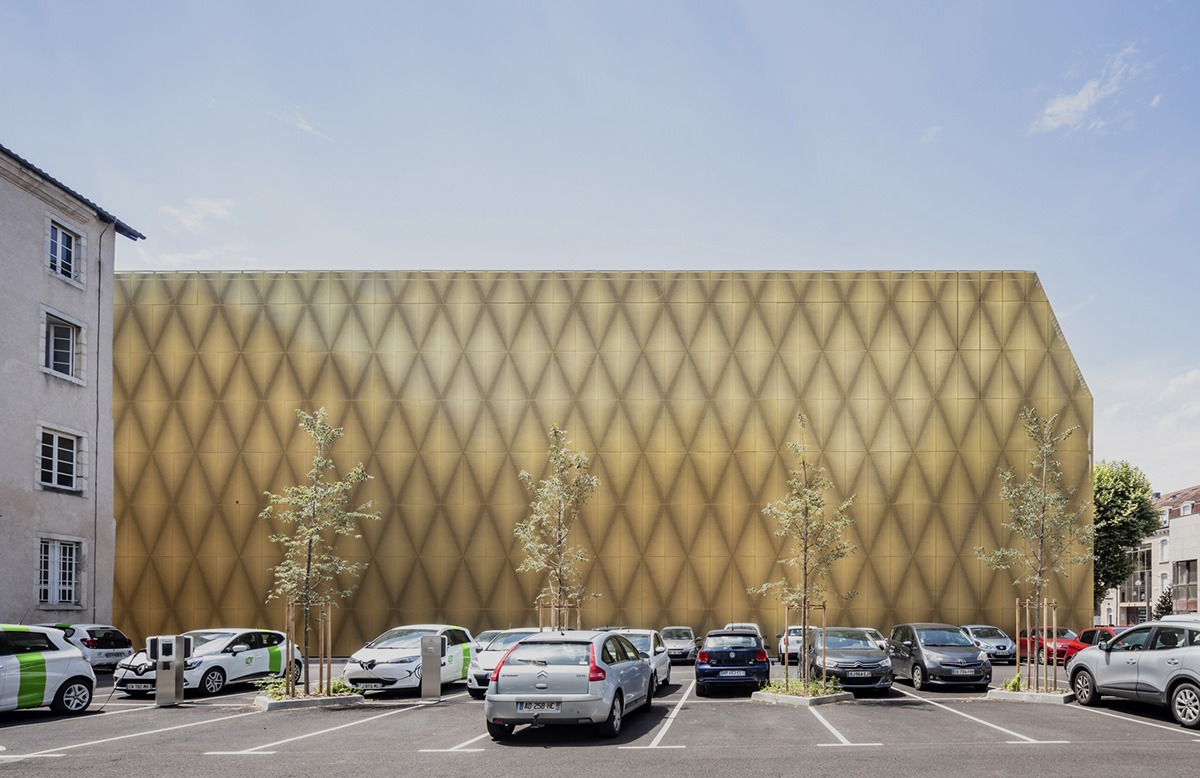 The brick volume mirrors the two buildings of the former barracks and is imagined as a contemporary and identifiable reinterpretation of these existing structures.

It is the most striking and visible element on the square, owing to the direct reference to the town’s history. Brick was chosen with the aim of enhancing the collective memory of the citizens of Cahors while avoiding any hint of pastiche. 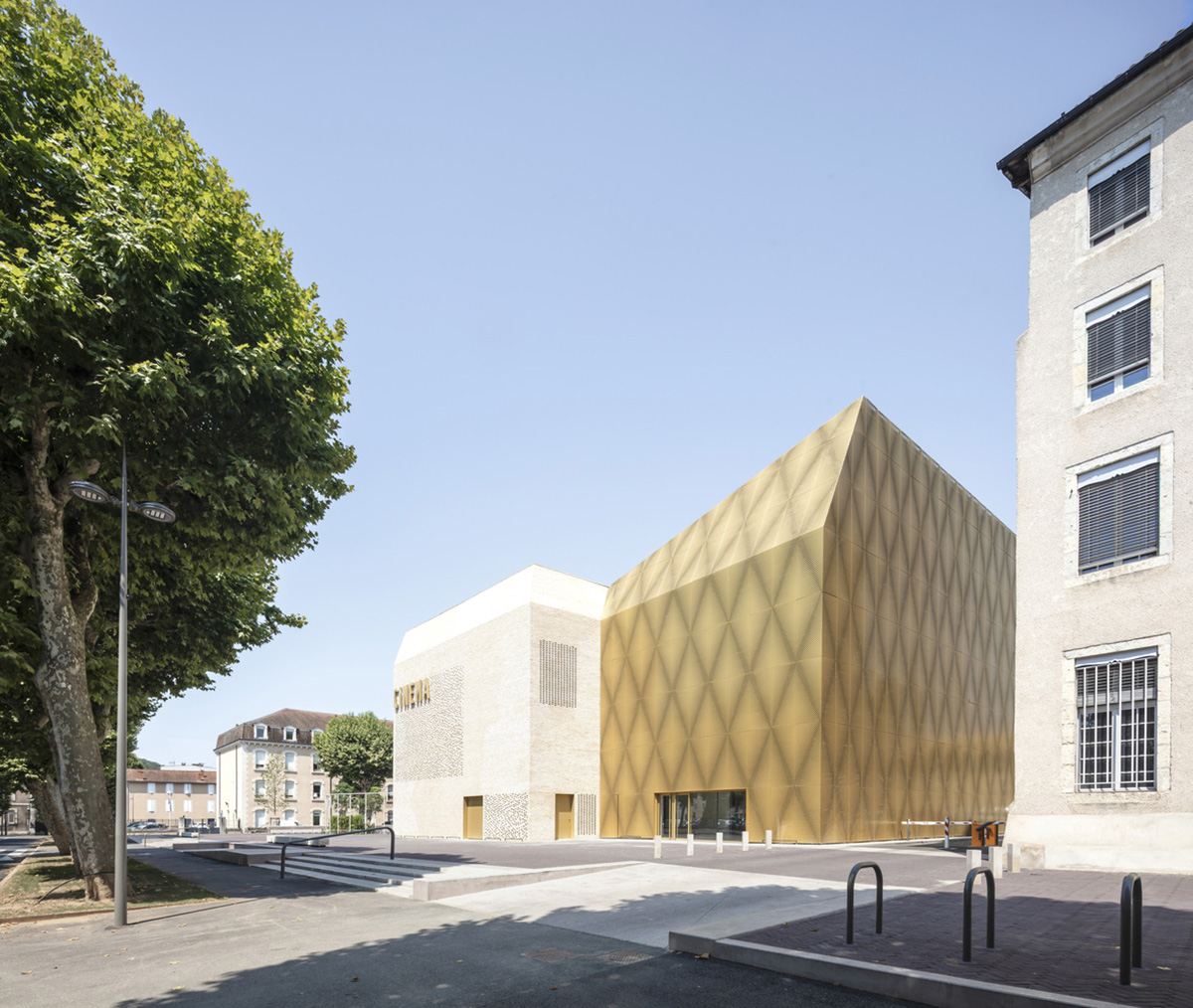 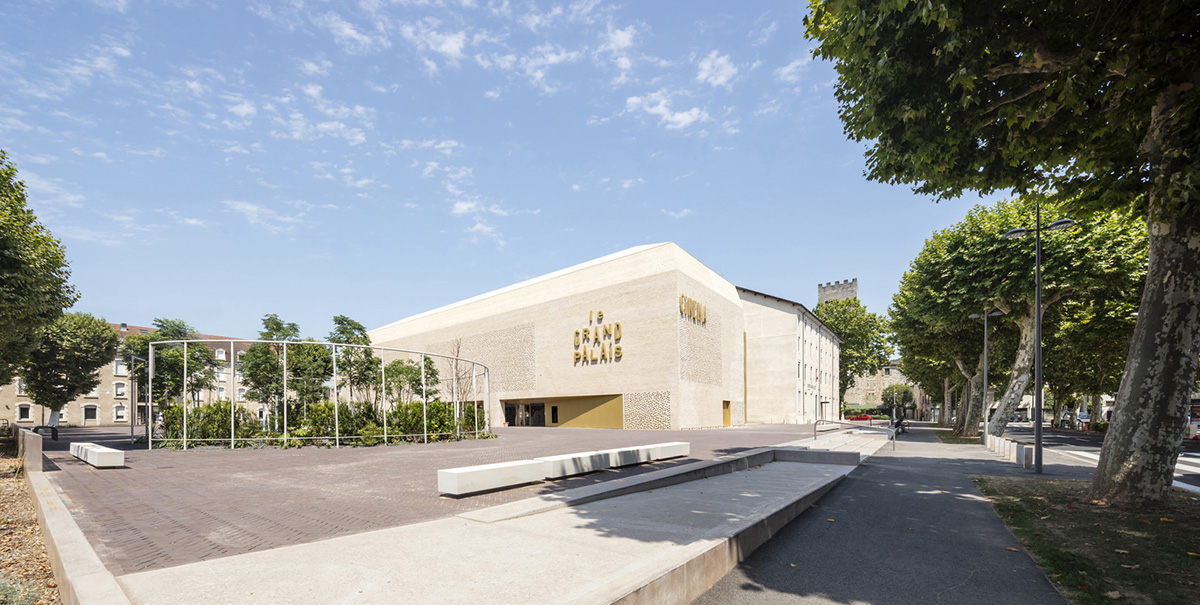 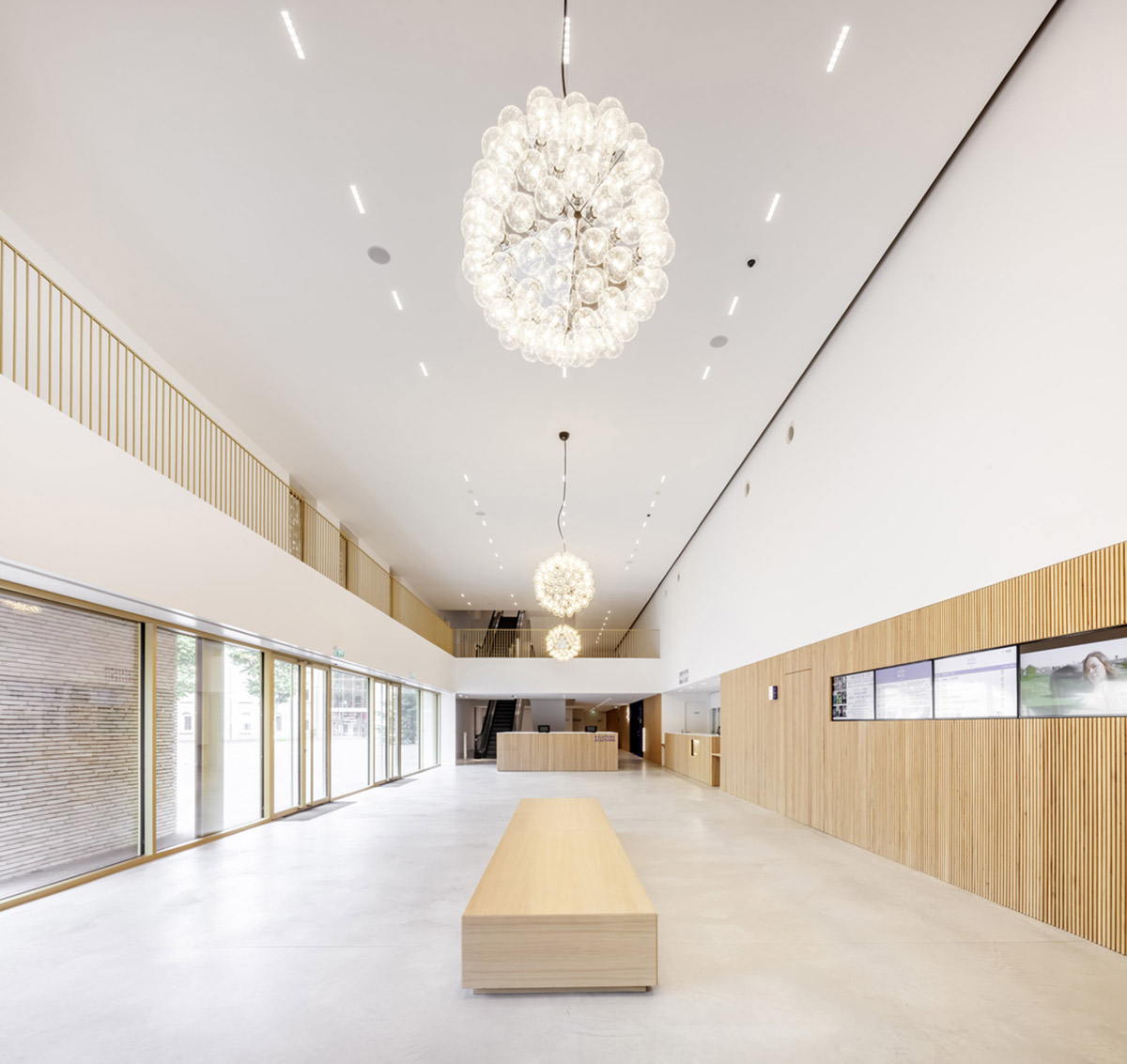 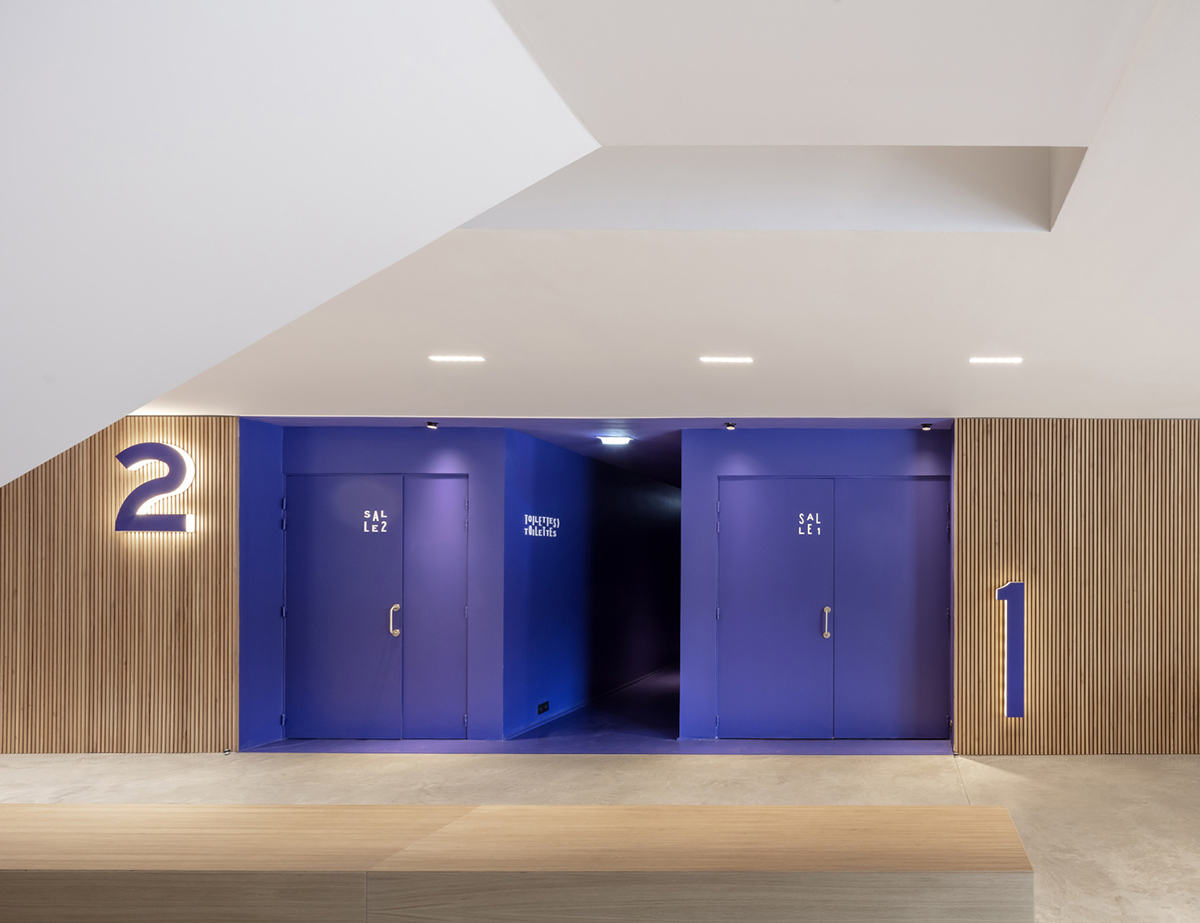 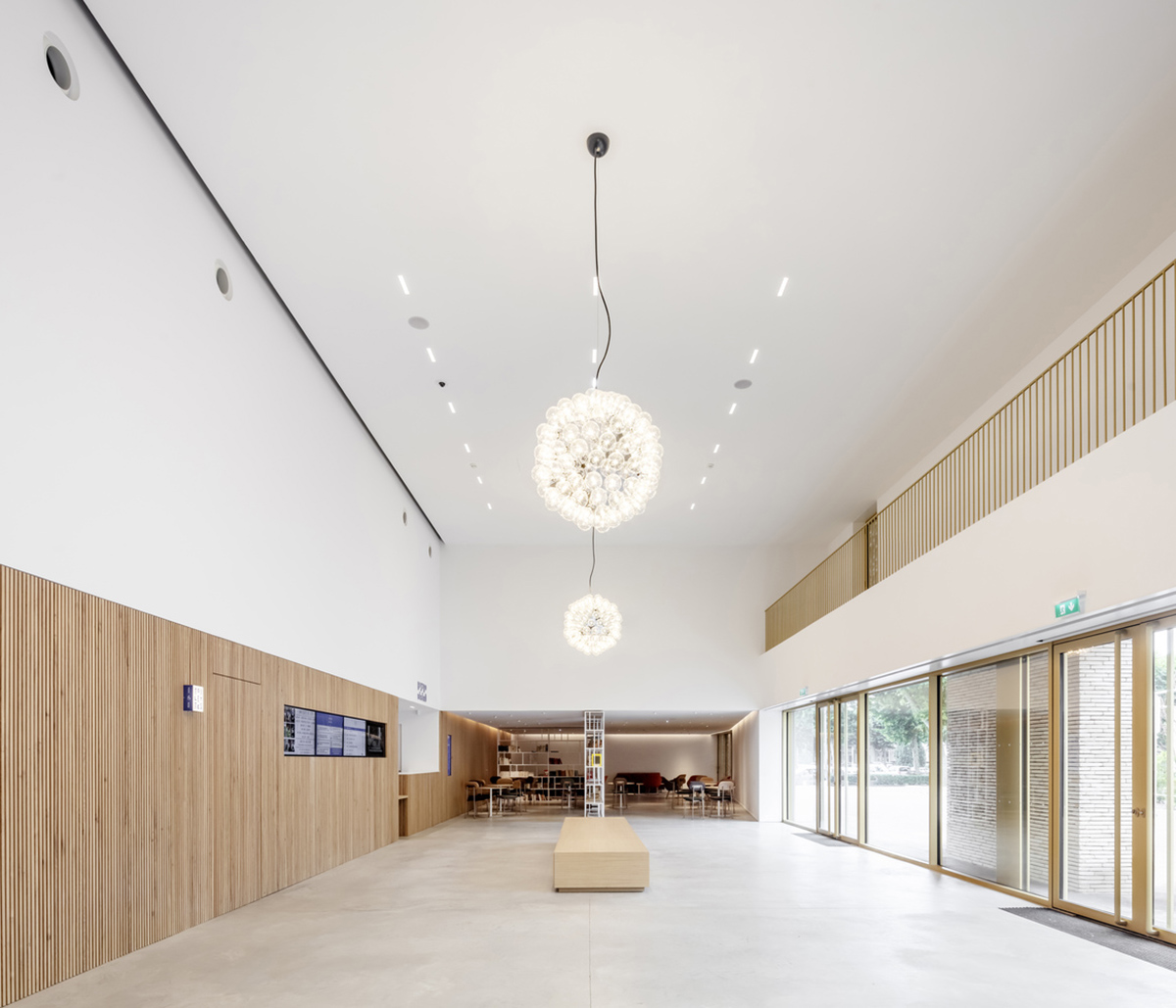 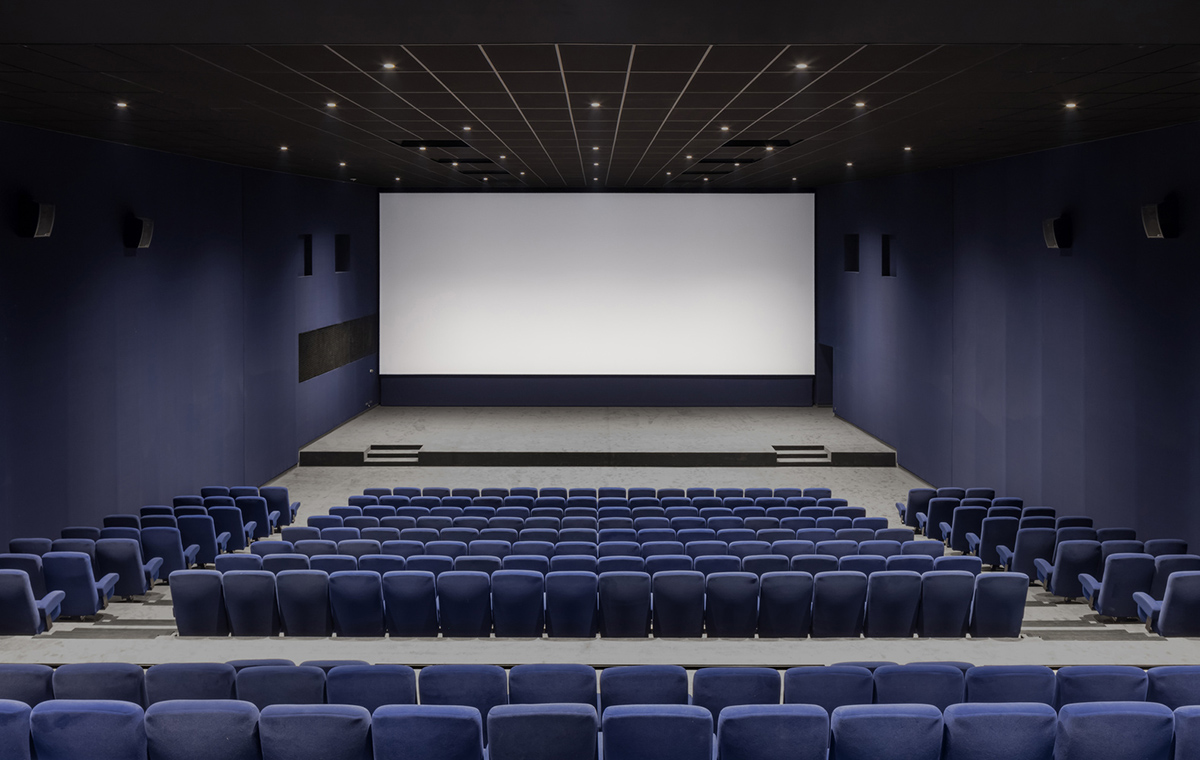 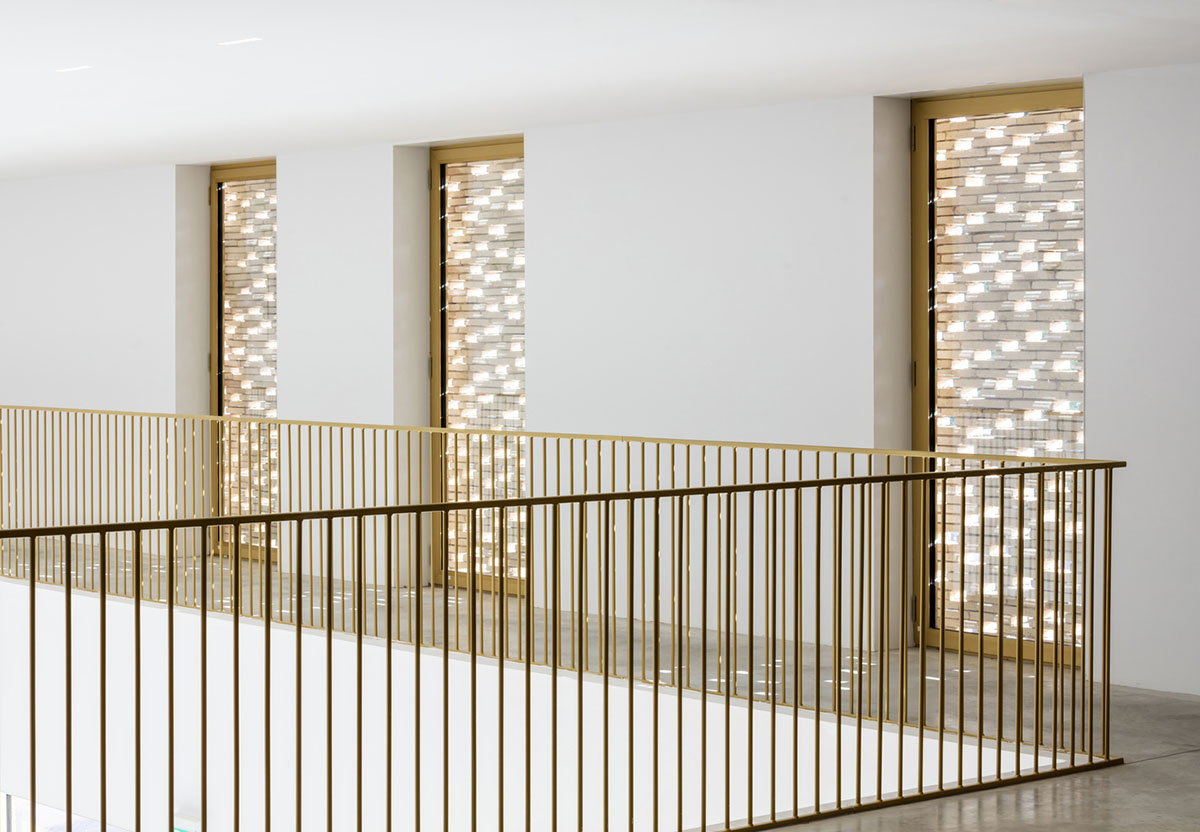 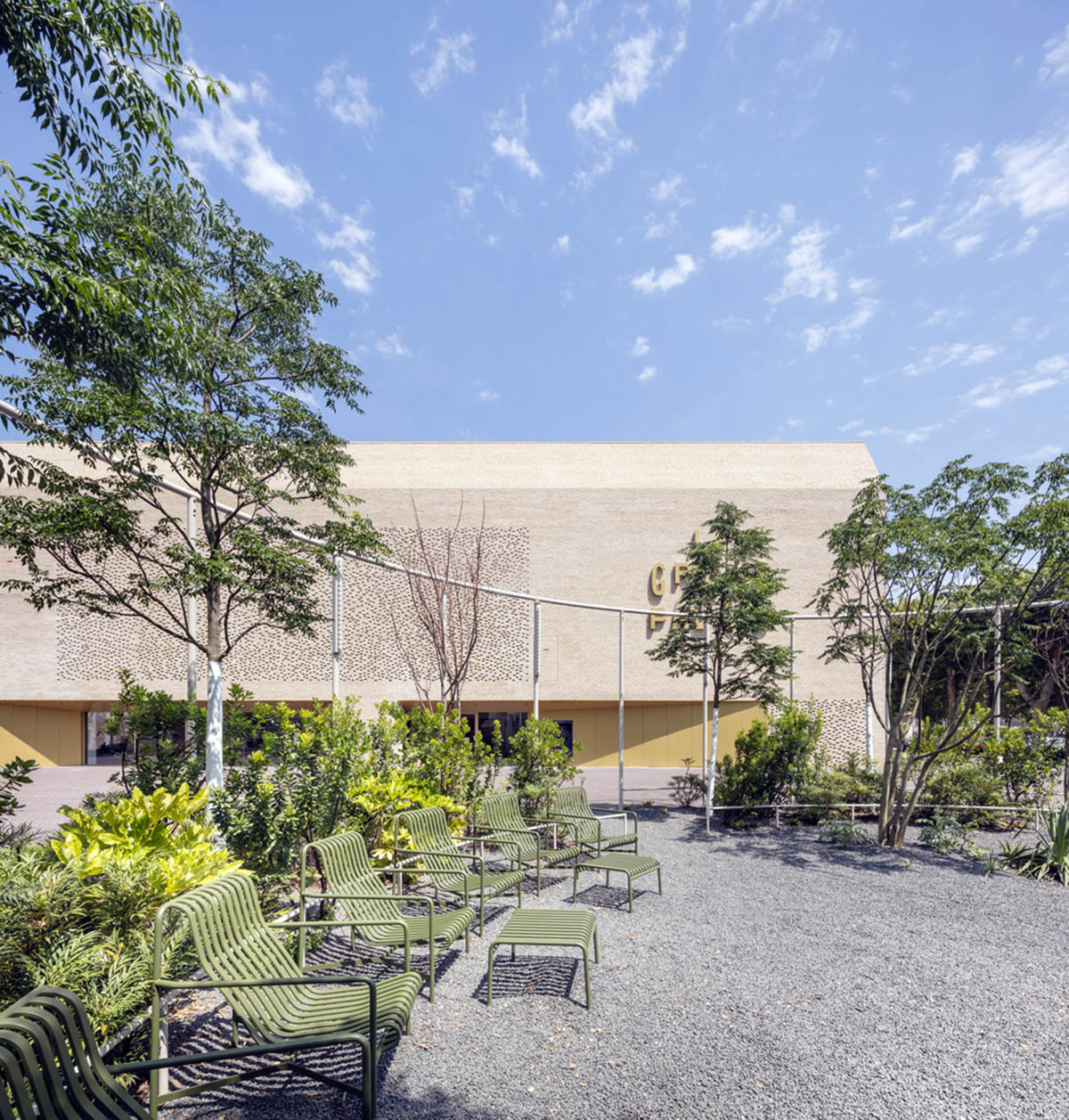 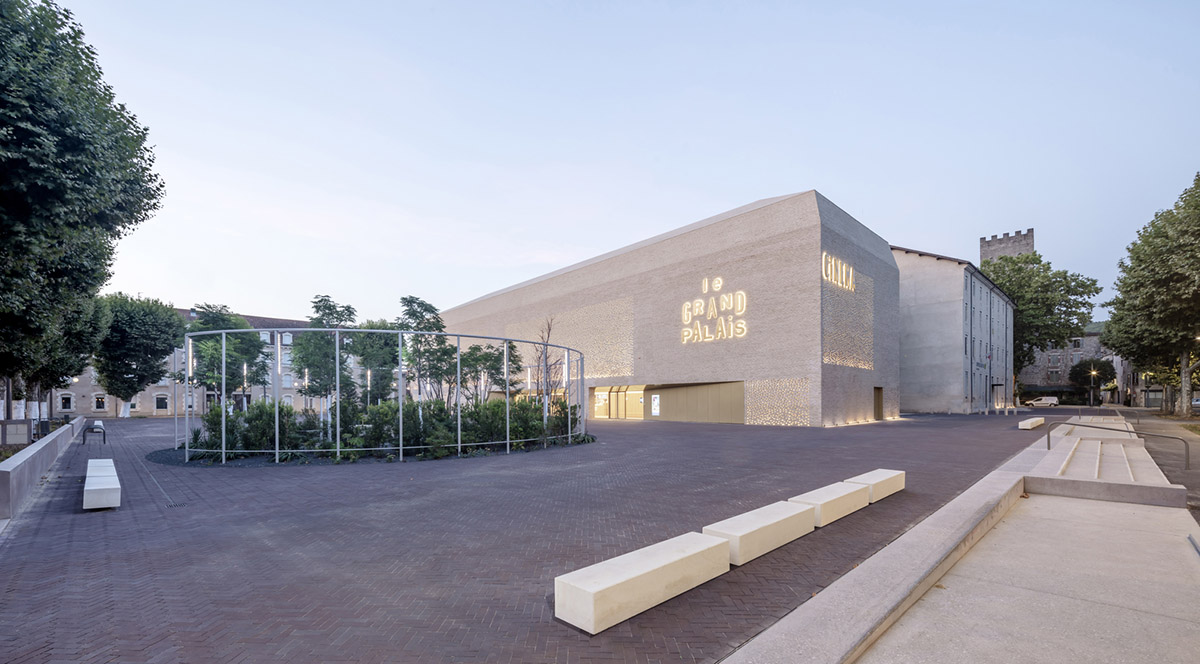 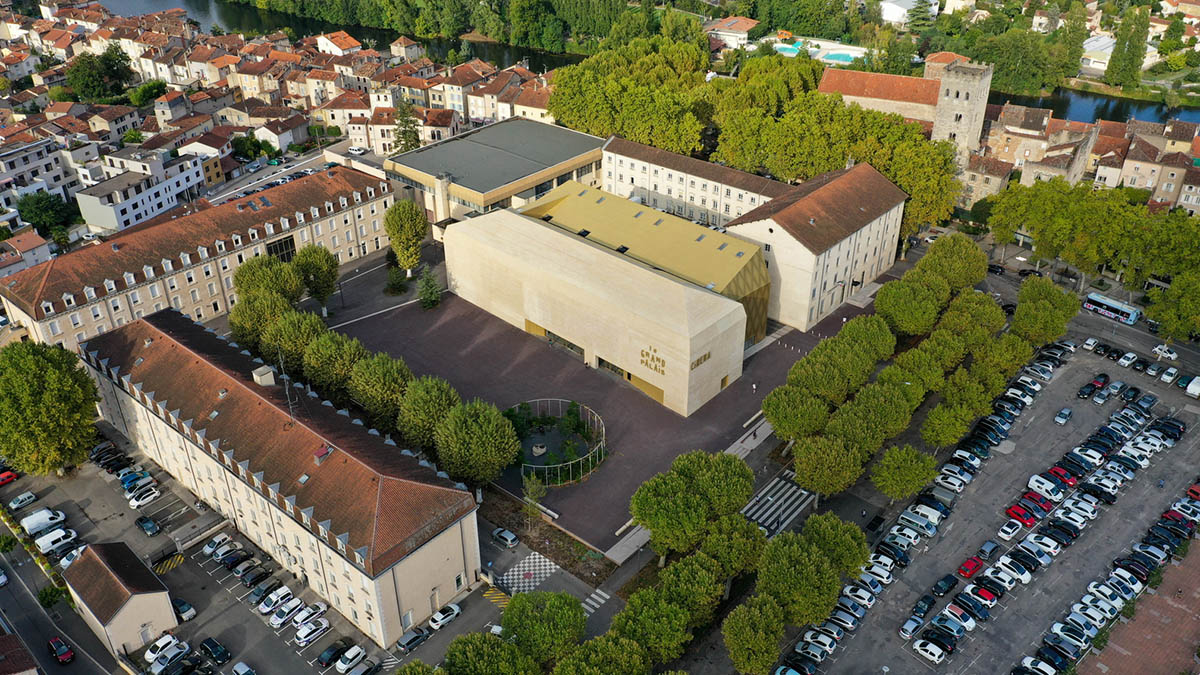 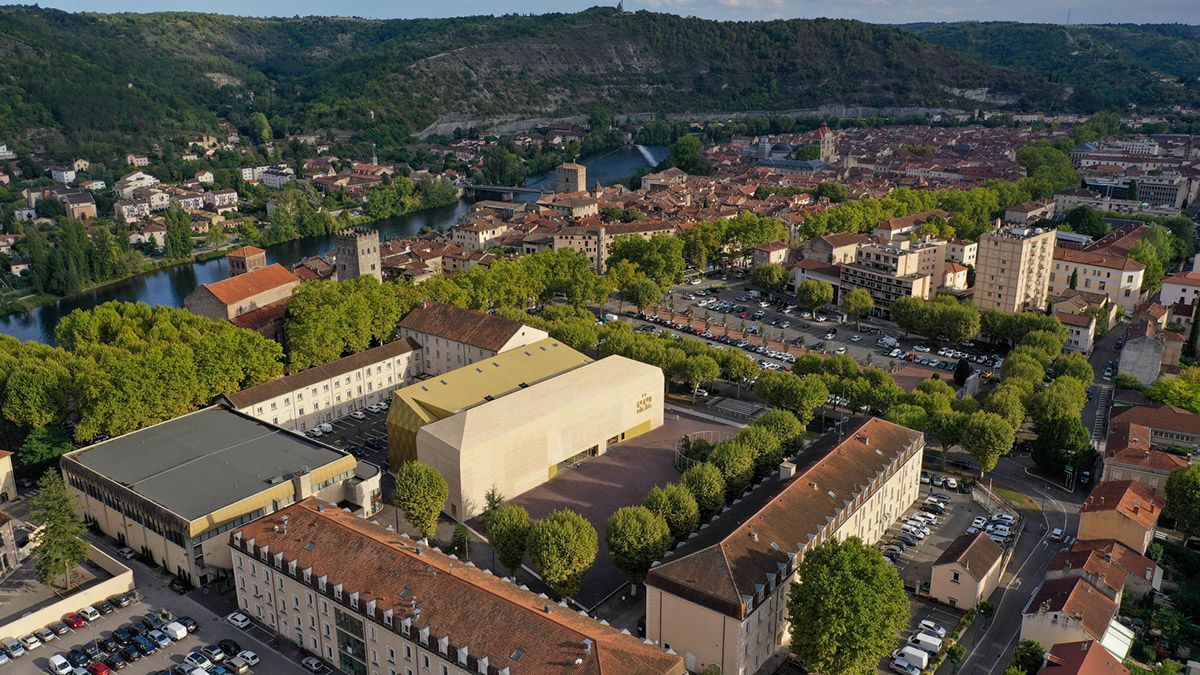 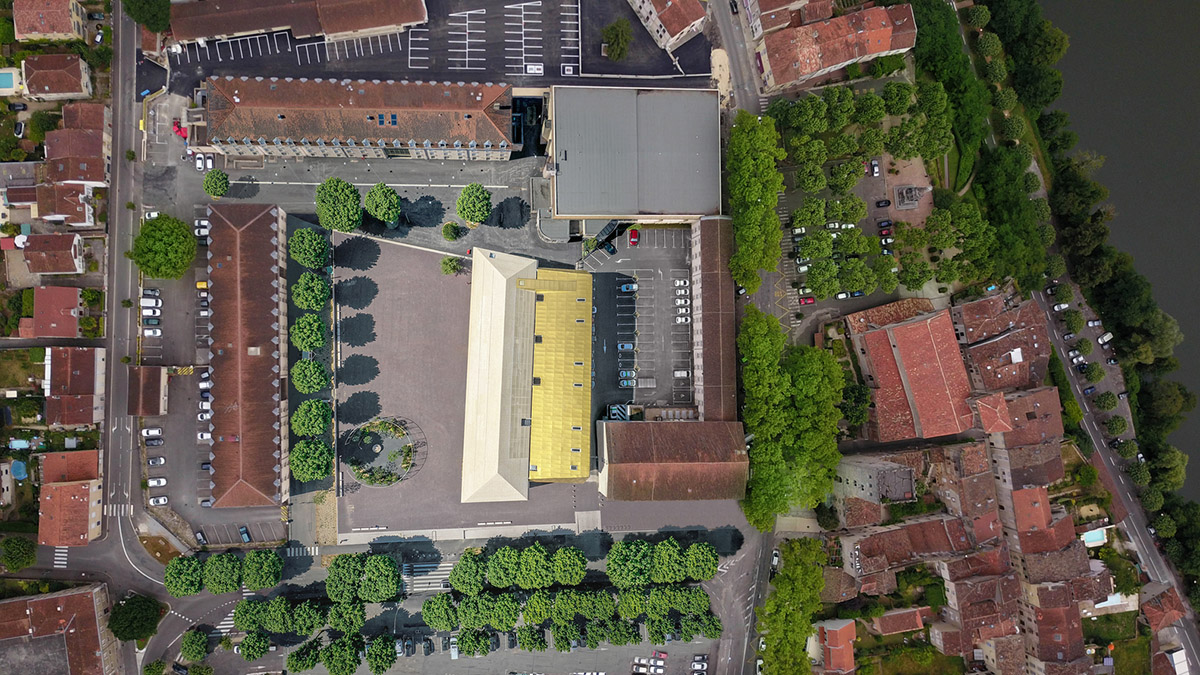 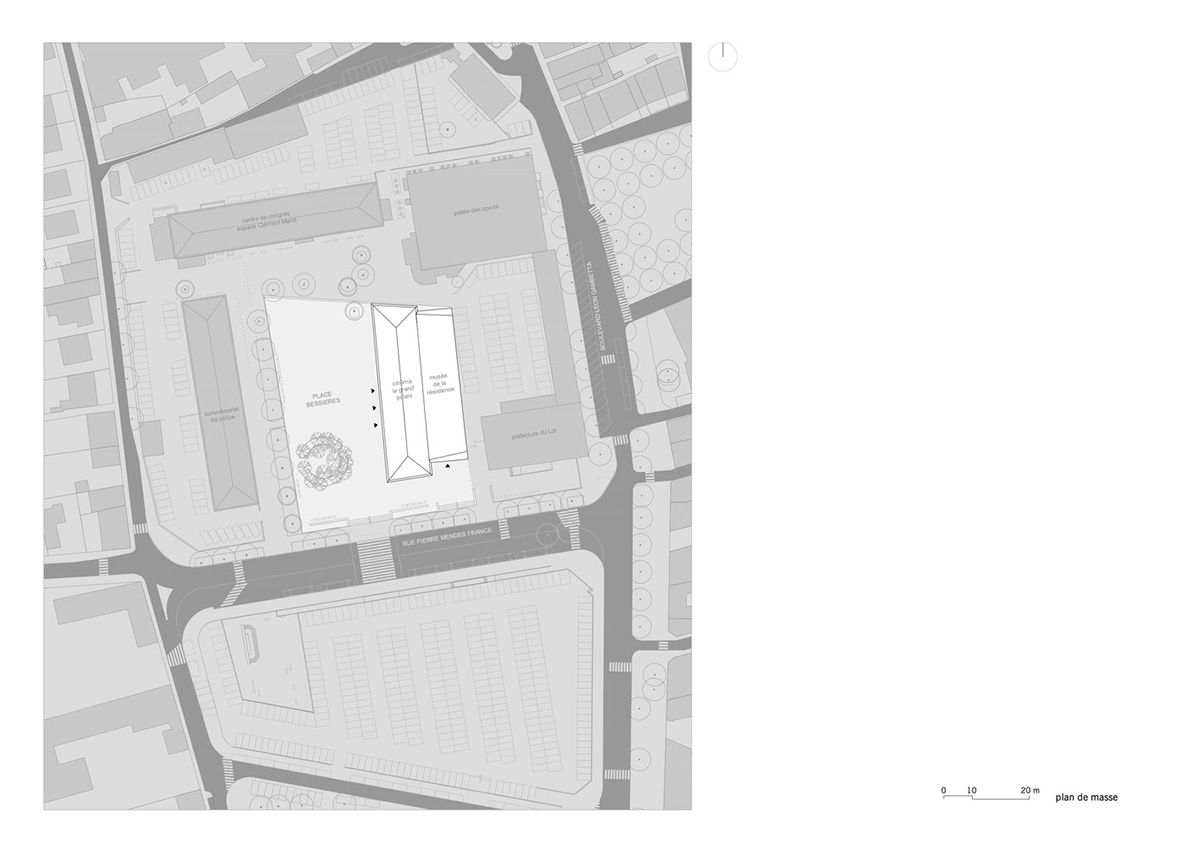 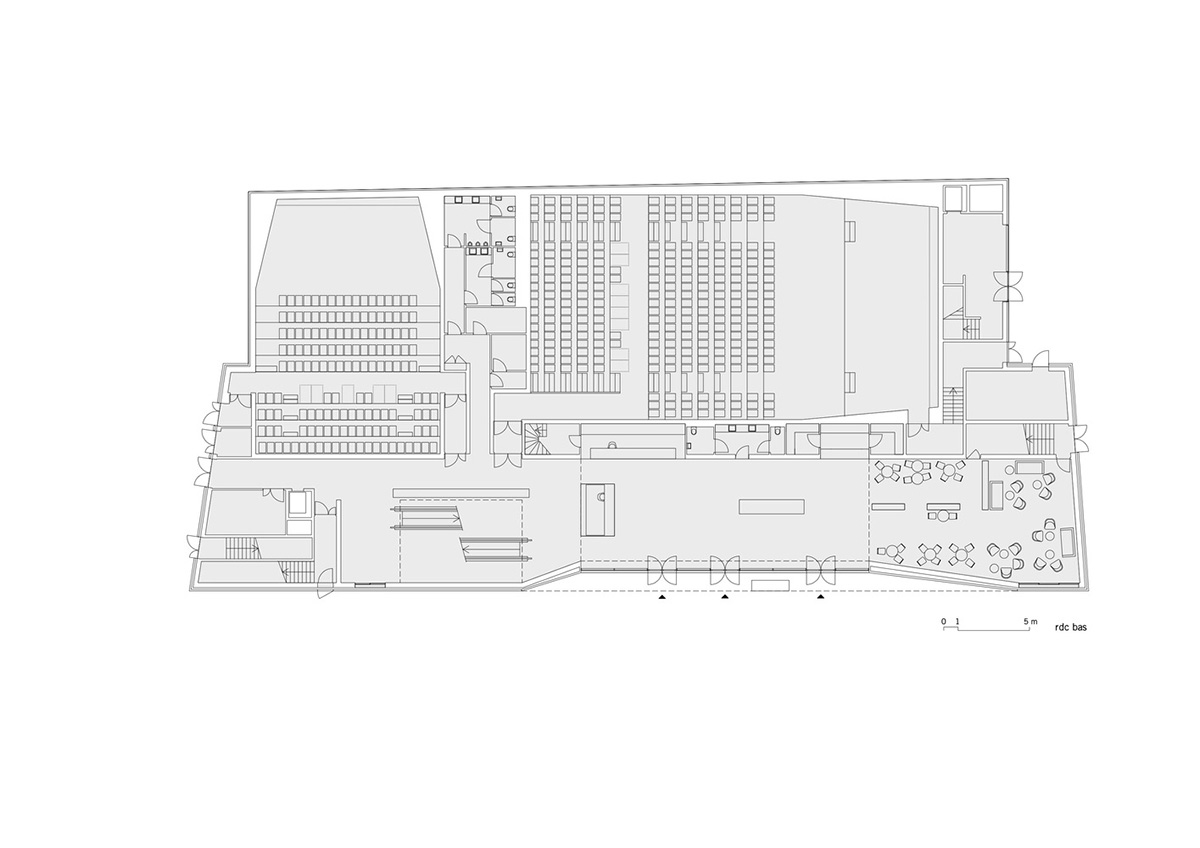 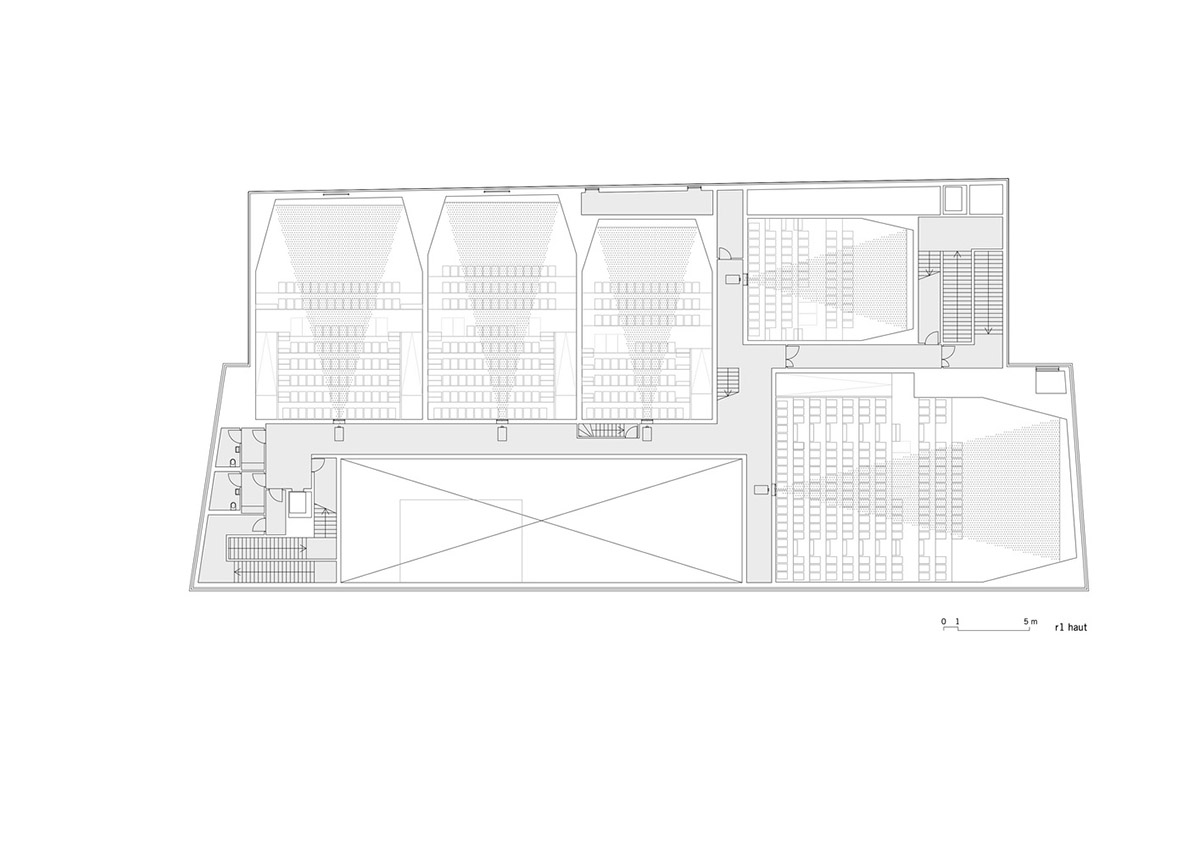 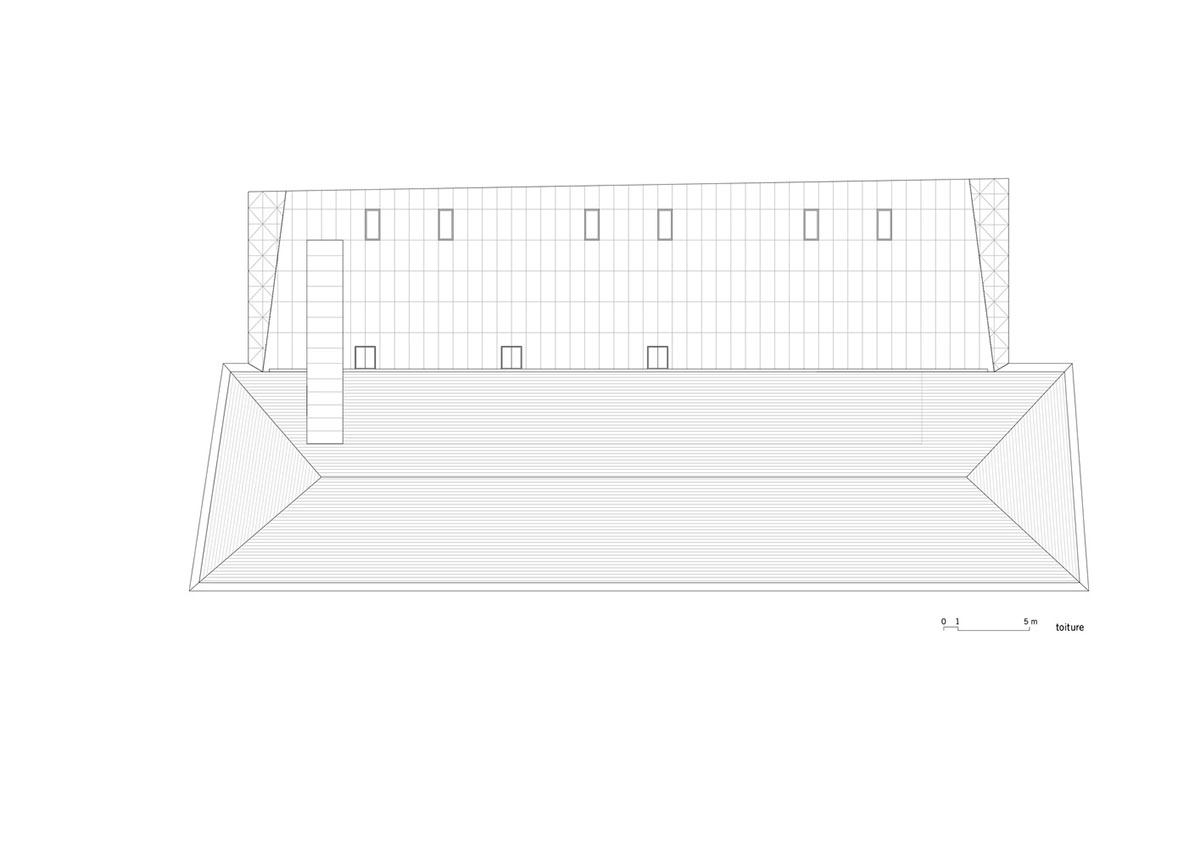 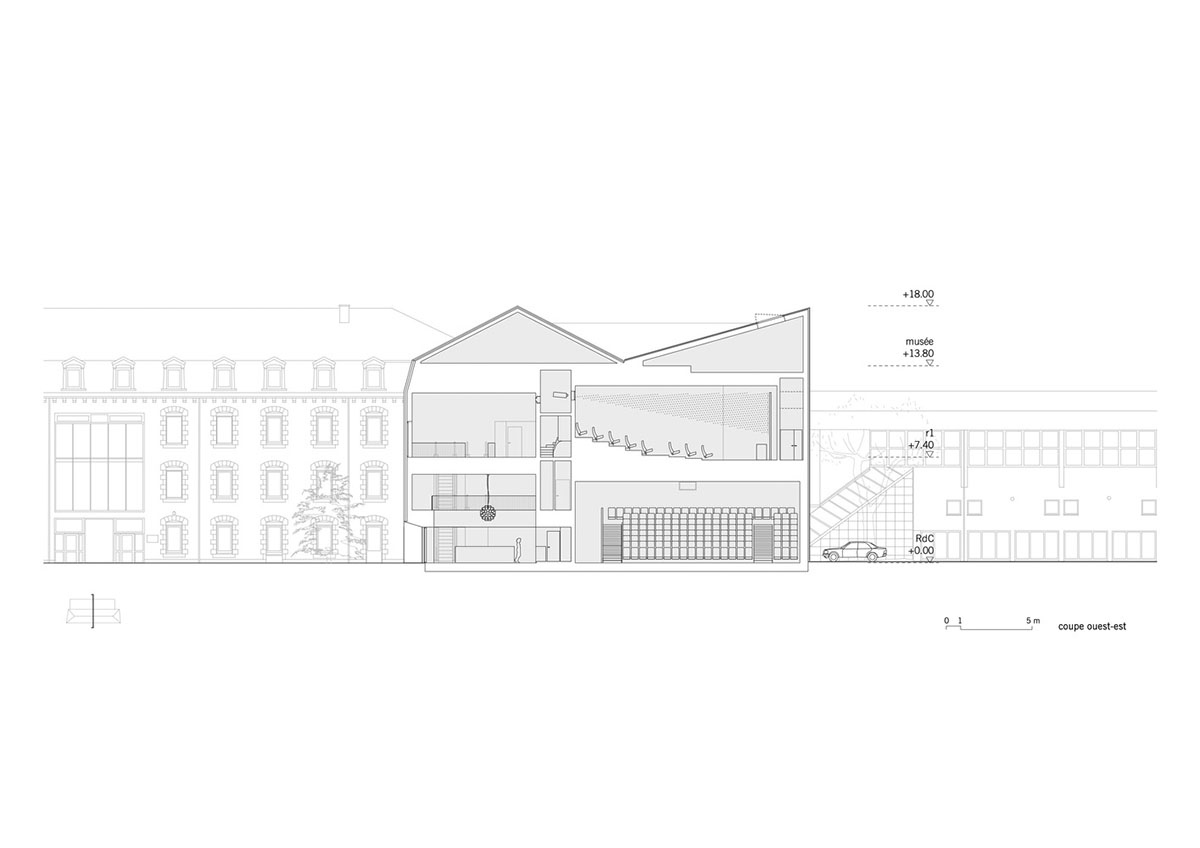 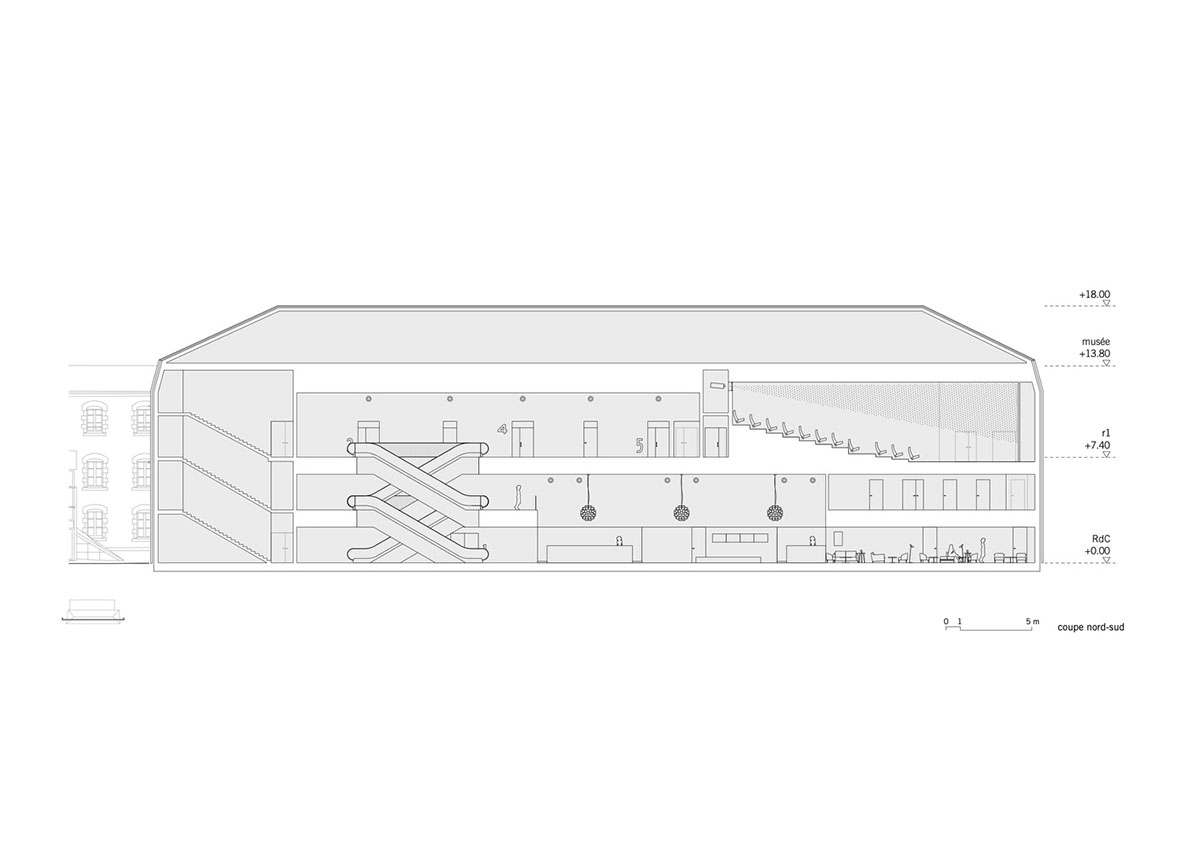 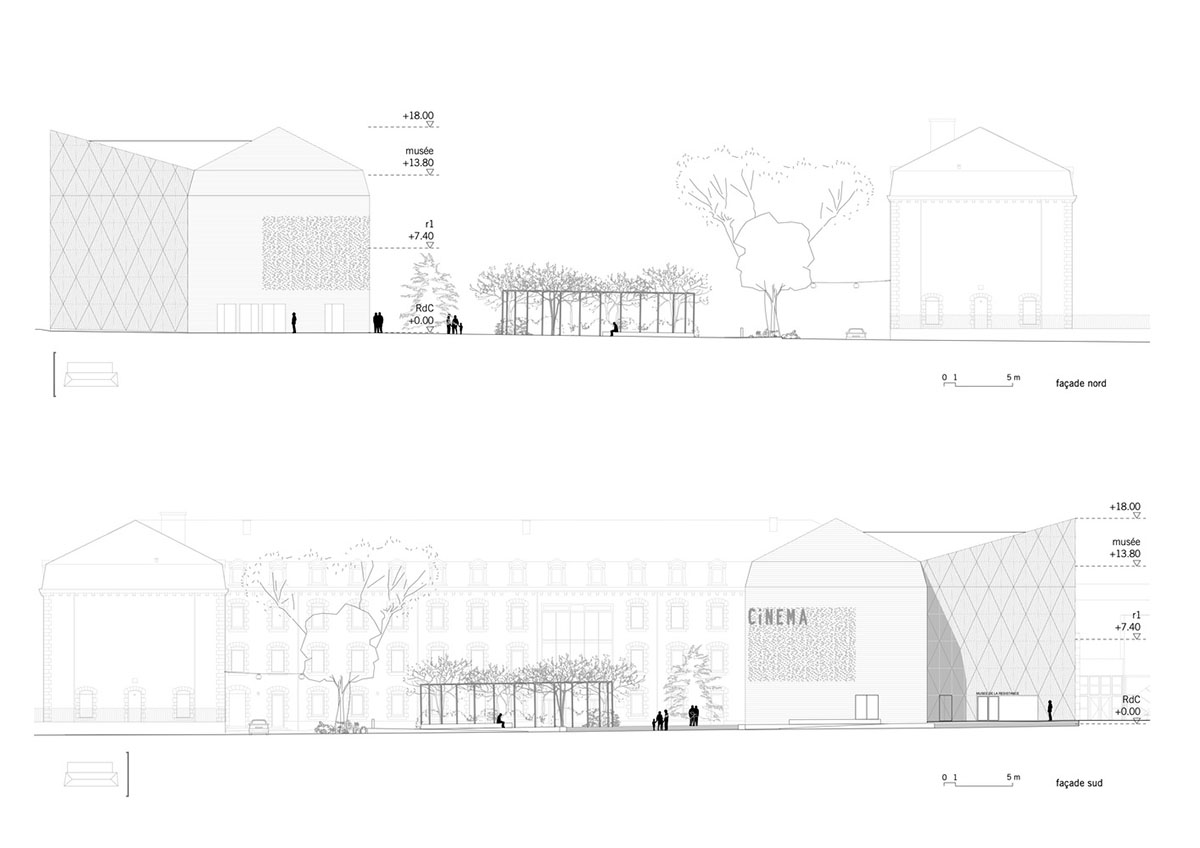 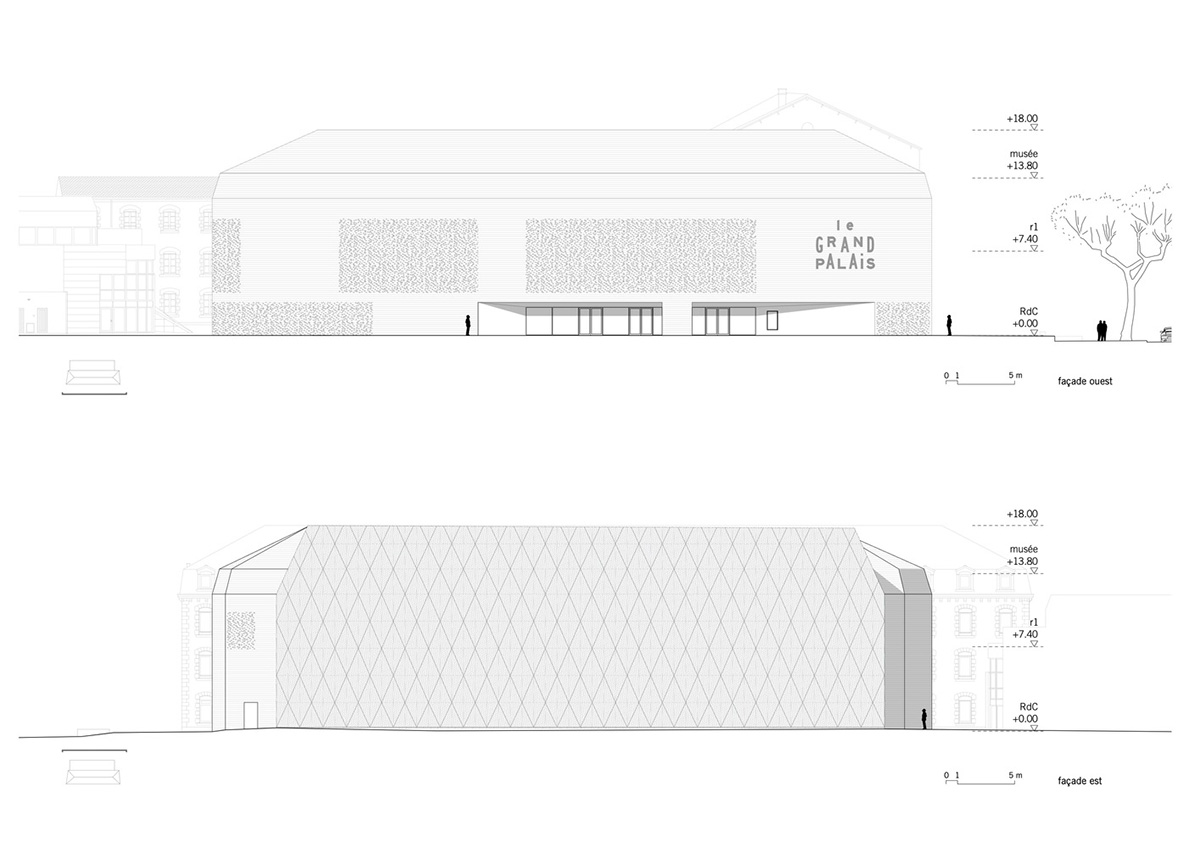