Studiobase unveils museum project on a historical site in Taiwan 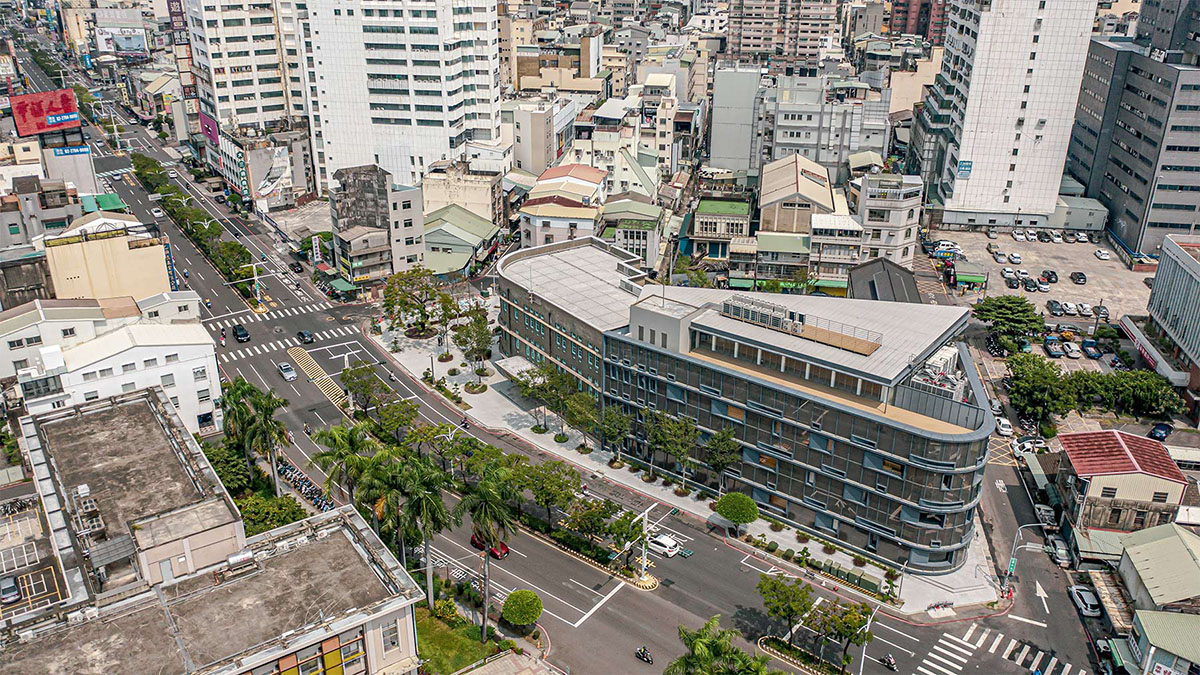 The existing complex was composed of four buildings used for Taiwan Tobacco and Liquor Corporation, Chia-Yi Branch Office, including a historical monument and other three auxiliary buildings in the site. 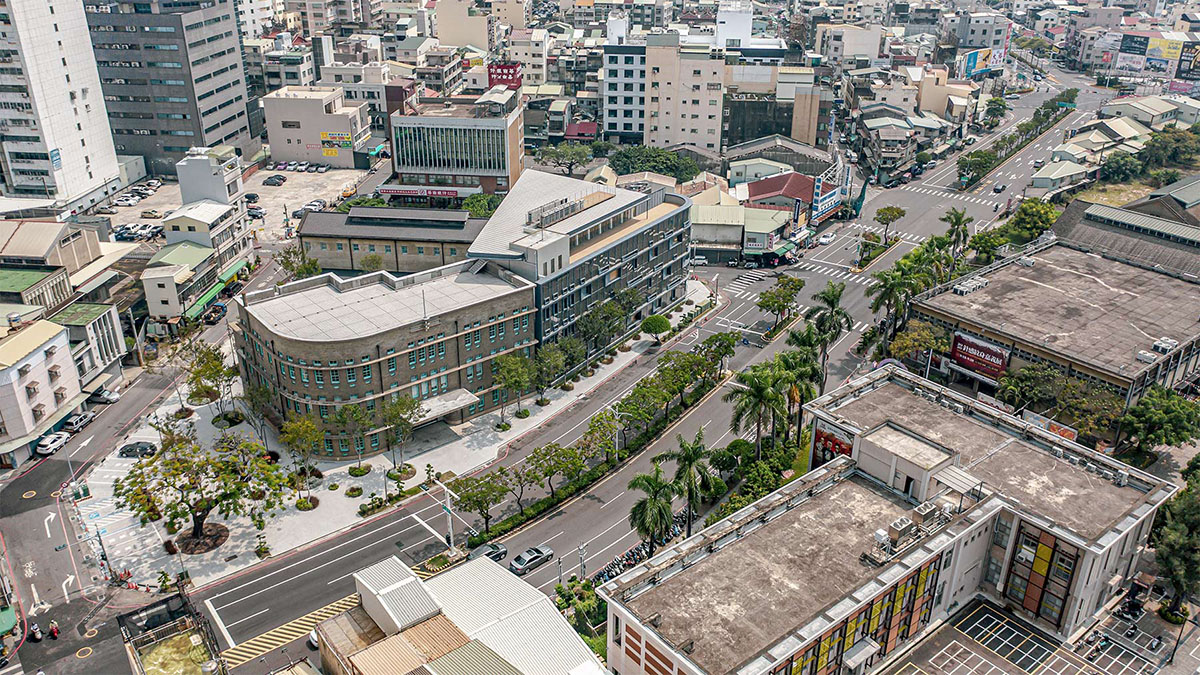 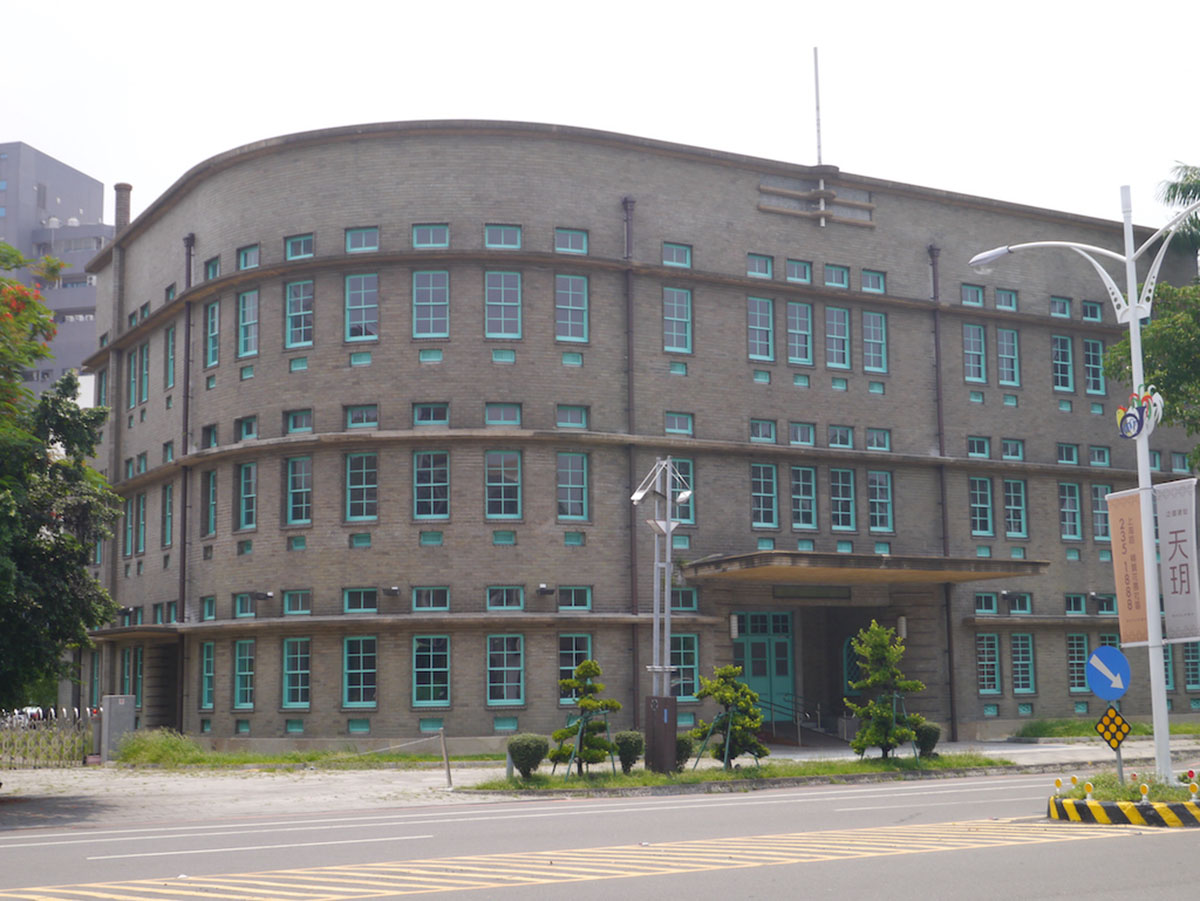 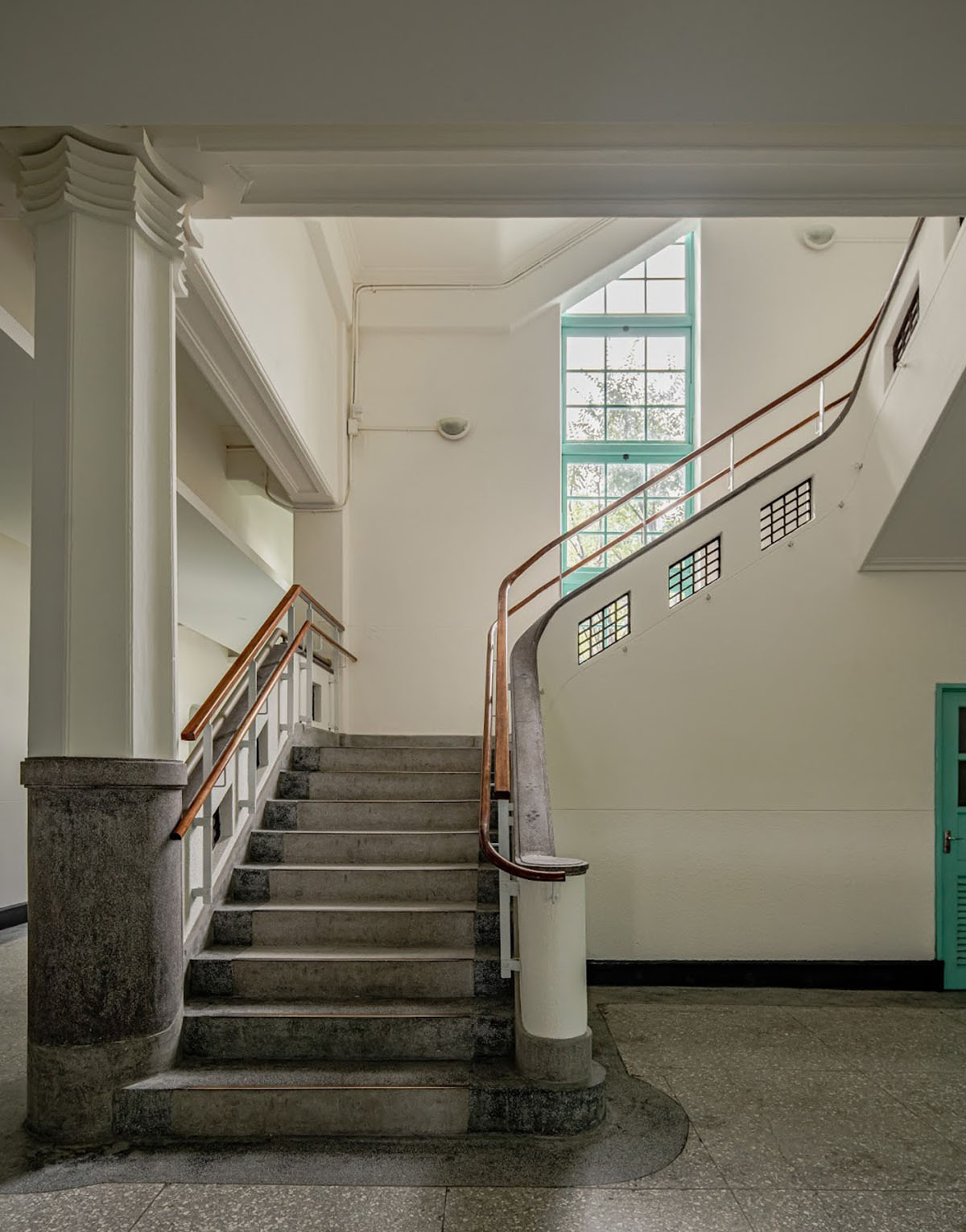 Built in 1936-37 during the Japanese colonial period, the existing site and 3-floor-tall reinforced concrete building was mainly functioned as the branch office of the Monopoly Bureau of Viceroy Office of Taiwan. It was designed by Japanese architect Maizawa Shejiro (1890-1958), the building plan layout is L-shaped, orienting northwest by southeast. The building has been a delicate witness of history, which materialized the architectural style transition from classicism to Art Deco.

Special features such as the rounded building corner, raised base platform, the elaborated horizontal opening lintel and floor lines, and the scratch style exterior tiles, all well embodied the eclecticism of the modern transition. The interior focal point is the “‎Hakkō ichiu” column located near the staircase, which is octagonal in plan, resembles the national motto of Japanese Militarism’s aesthetics at the World War II.

After the war, the building was continually used by Taiwan Tobacco and Liquor Corporation. It was once adapted as a battalion fortress during the 228 Incident. The building was appointed as a historical monument in 2000 and city government chose the site for Chia-Yi Art Museum in 2014. The design started in 2016 and constructed during 2018-20. The old building is finally regenerated and reopened in 2020. 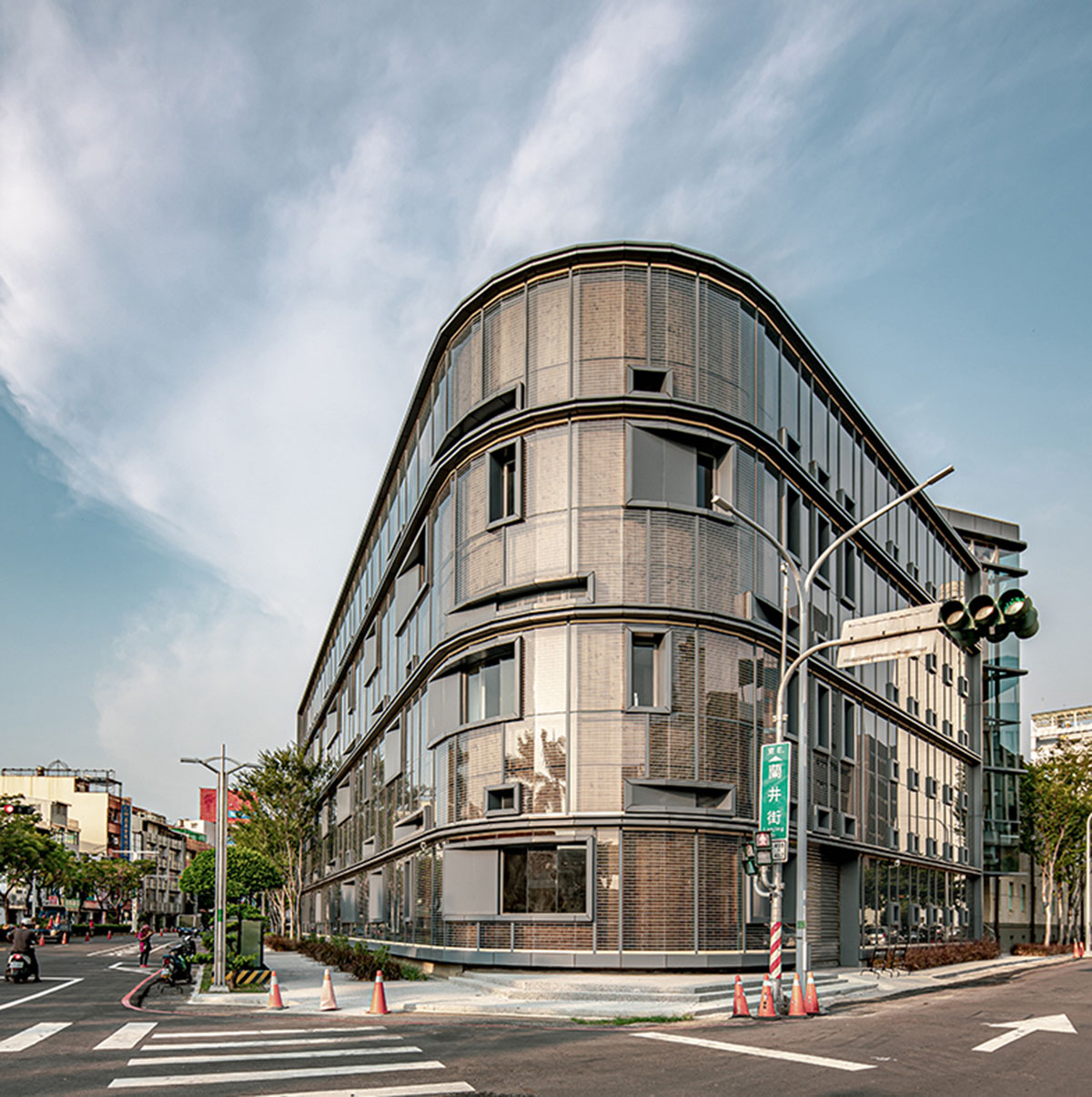 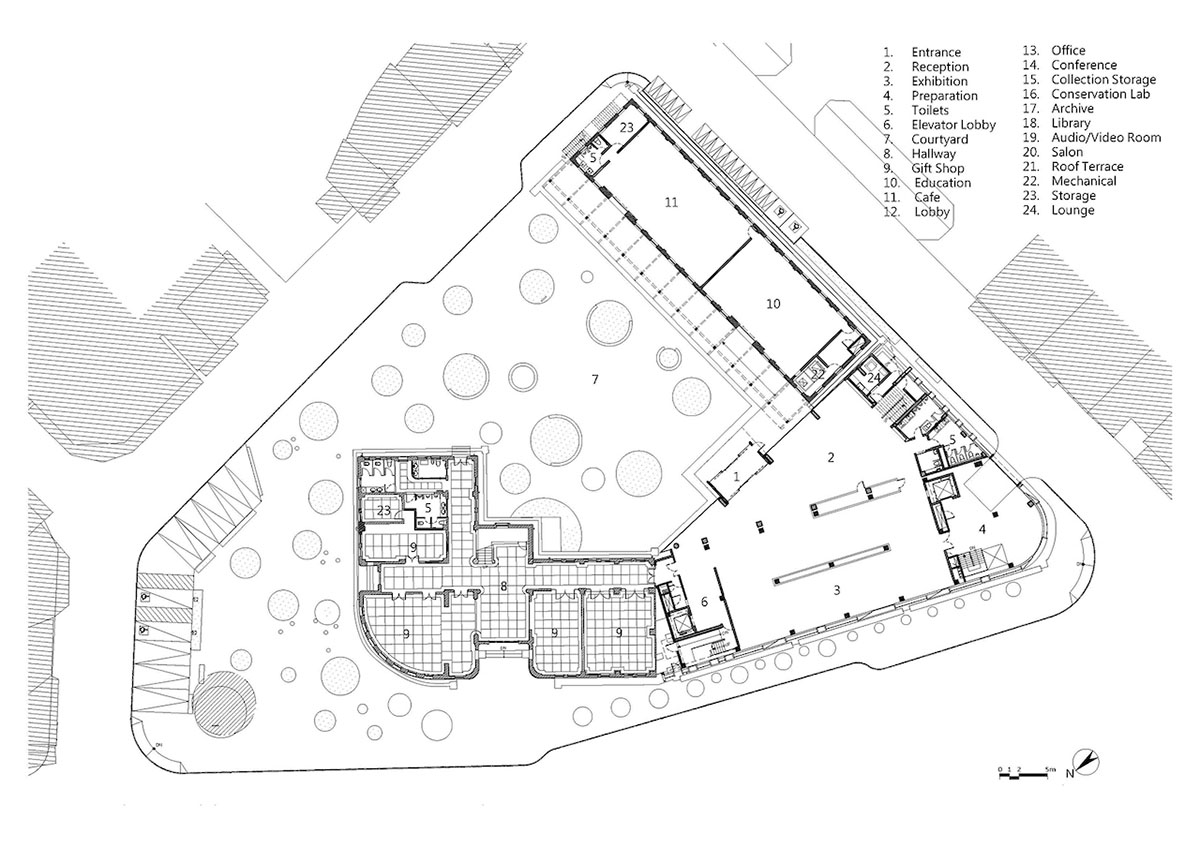 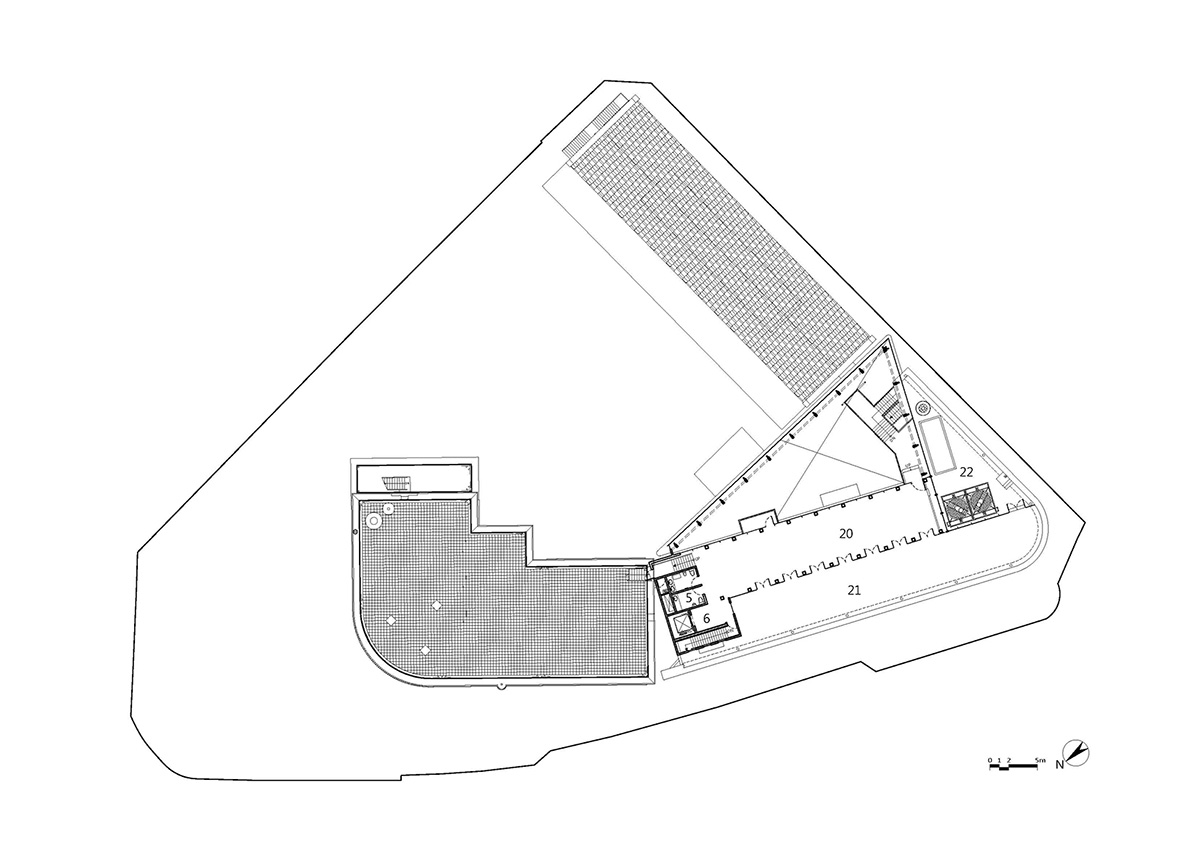 The time-transgressive dialogue between construction and tectonics

How to preserve and re-vitalize the historical buildings has been becoming an important issue nowadays, it is also a major challenge to minimize the disturbance of demolition and construction on existing site, yet to endow new perception and function to this project. The architects try to respond this challenge by introducing contemporary design concept and material to integrate the structures and spaces among the existing and the new constructions, so the life of the complex can be extended through the injection of museum management and maintenance as an integrated whole. 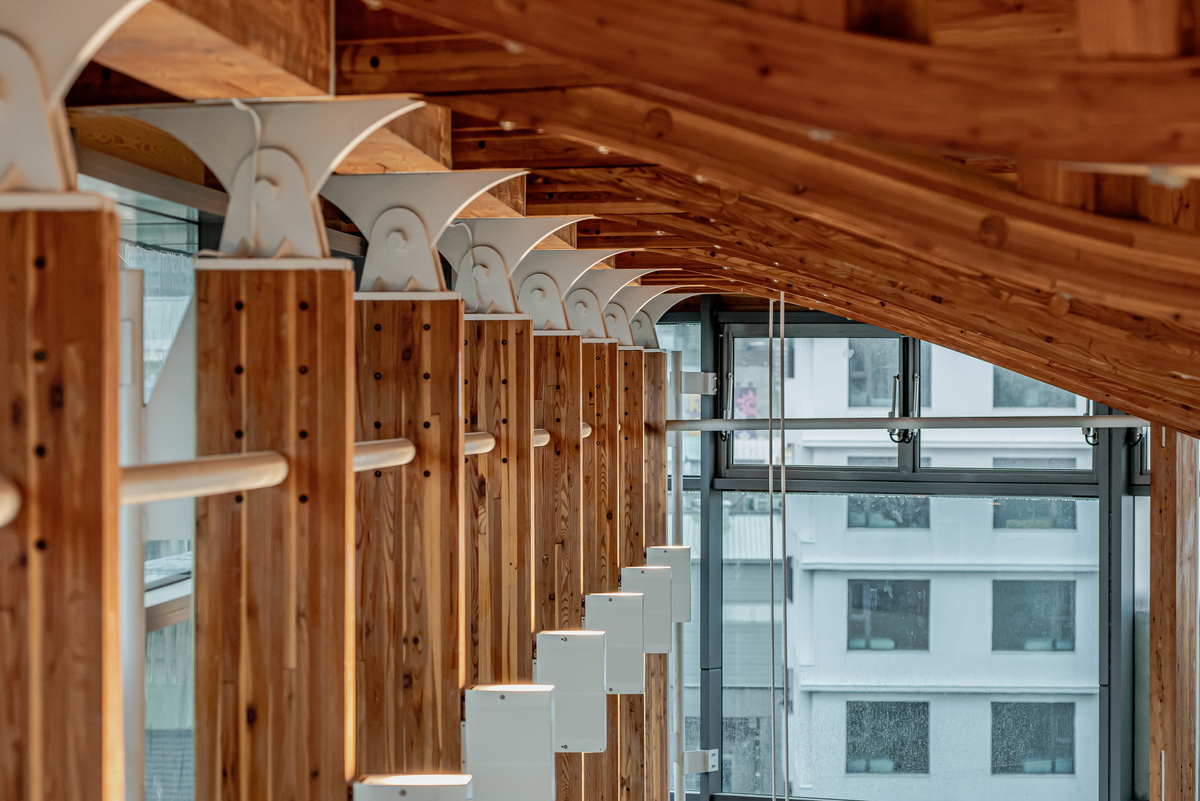 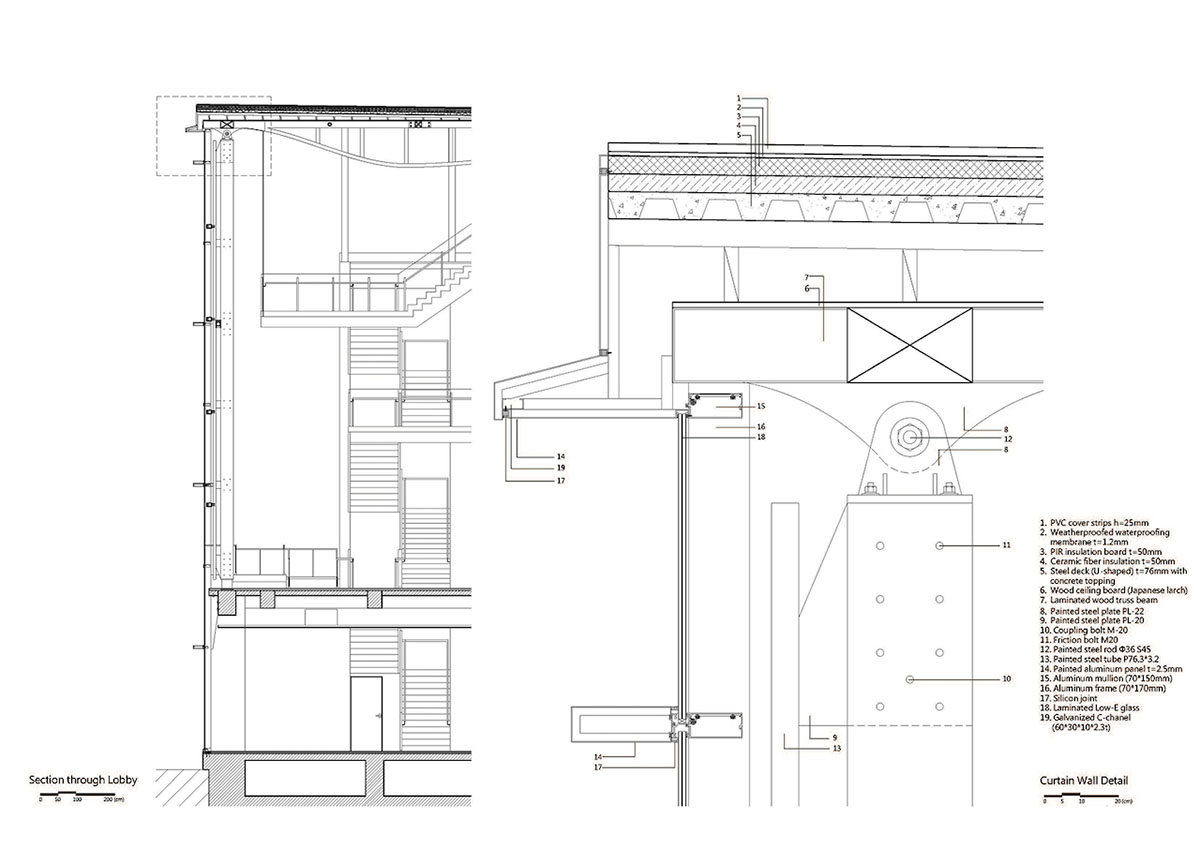 Chia-Yi City has been called "The Capital of Woods" due to the city’s pivoting location between Ali Mountain Forestry Center and its transportation corridor. Although the wood industry gradually withdrew from Taiwan’s building industry due to the thriving of reinforced concrete construction in 20th century, it is making a comeback in 21st century for wood’s negative carbon emission nature, and the leaping development of new production technics. Therefore the design strategy of incorporating the old (RC) and the new (Glulam & CLT) to improve the seismic performance and the amenities of the art museum, which not only puts the contemporary issues of reservation into practice, also corresponds to the theme of “The Capital of Woods”. 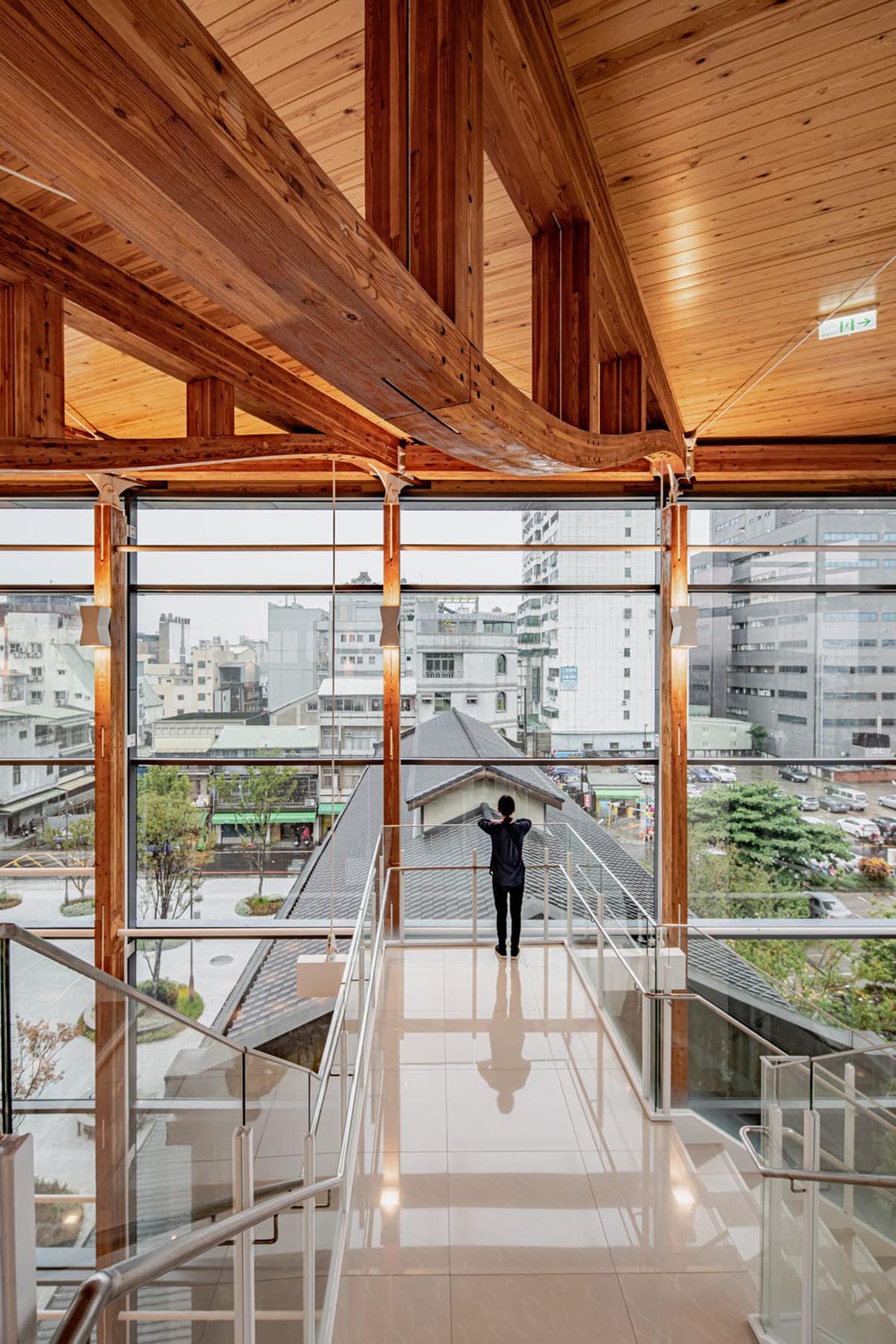 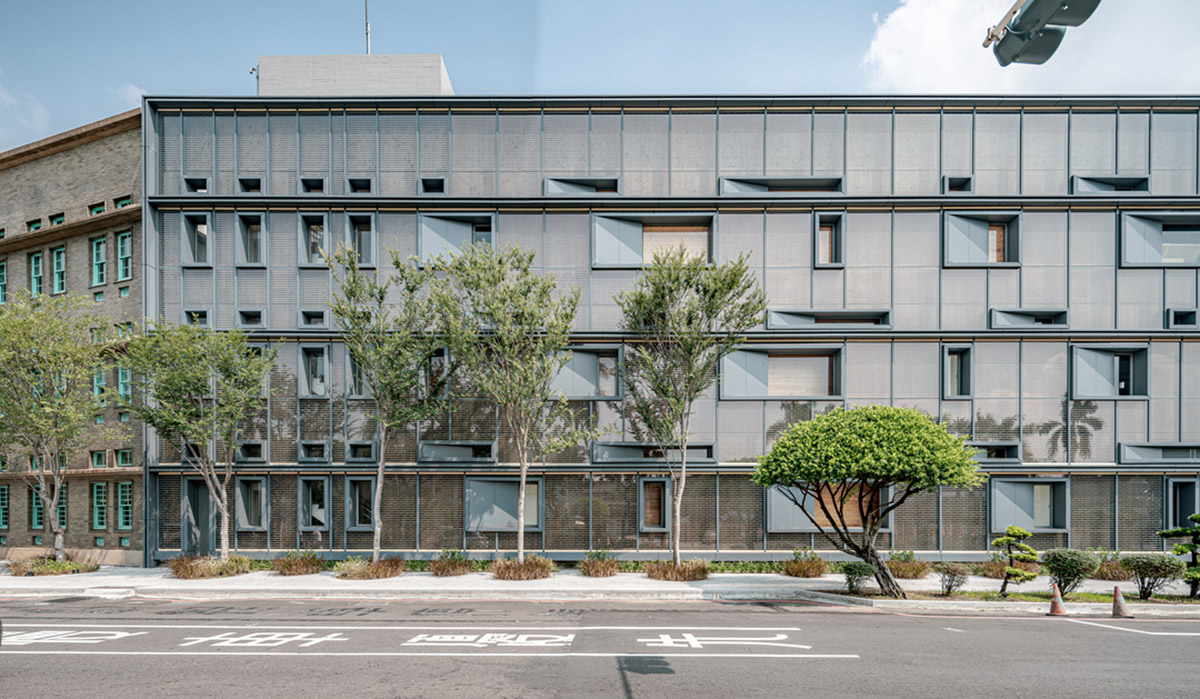 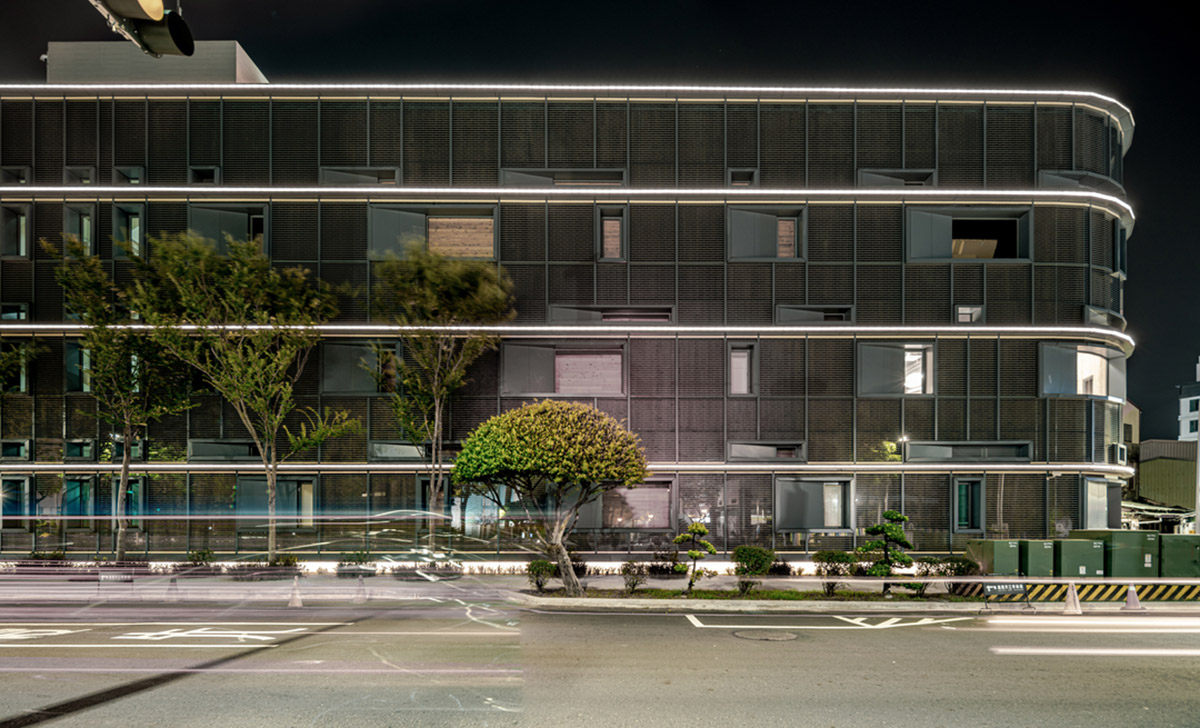 In order to reduce the structural load (by 70%) and to improve the thermal insulation performance, the architects demolished the south and west exterior walls of the next building, replaced with Cross Laminated Timber (CLT) wall with glass rain-screen curtain wall. All the opening vocabulary of the building complex are in similar proportion to maintain the consistency of the street façade. The new three-story-tall museum lobby is supported by glulam trusses and columns, and is enclosed by structural glass curtain wall. By placing the lobby entrance towards the re-landscaped courtyard, the architects turn the inner courtyard into an "Urban Living Room", which is no longer the residual empty lots of building site, but an attractive and characteristic open space that can reside in every visitor’s memory. 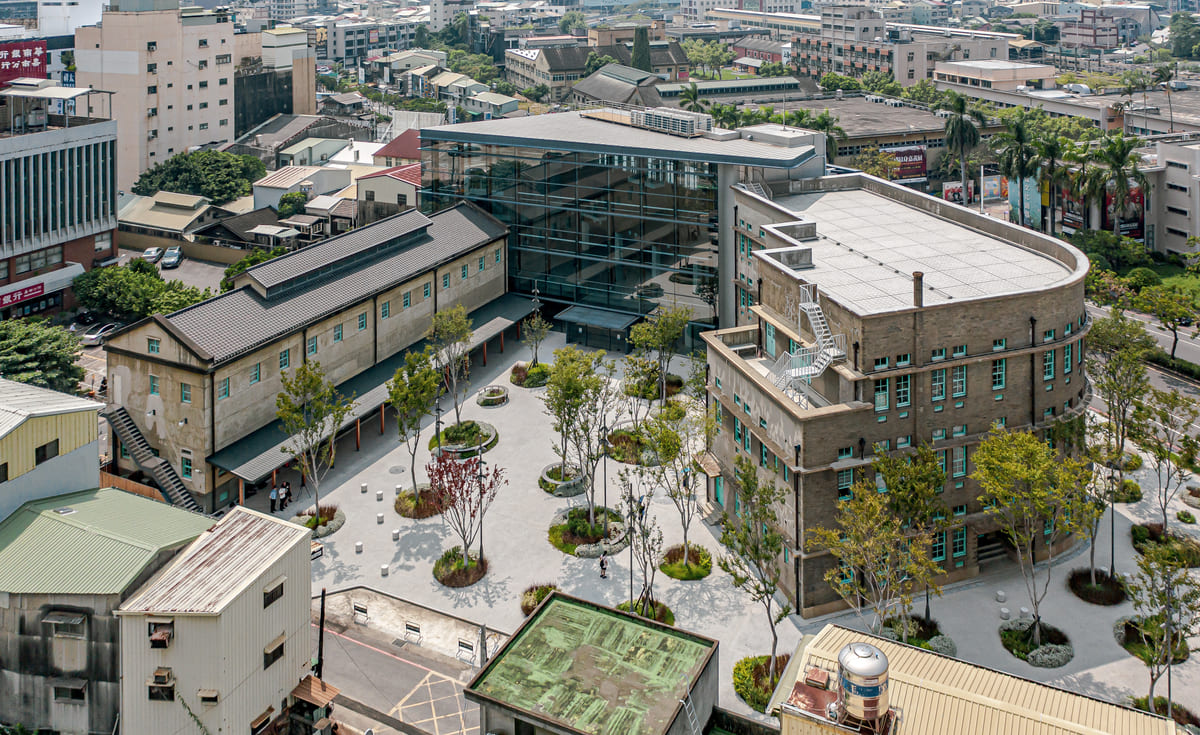 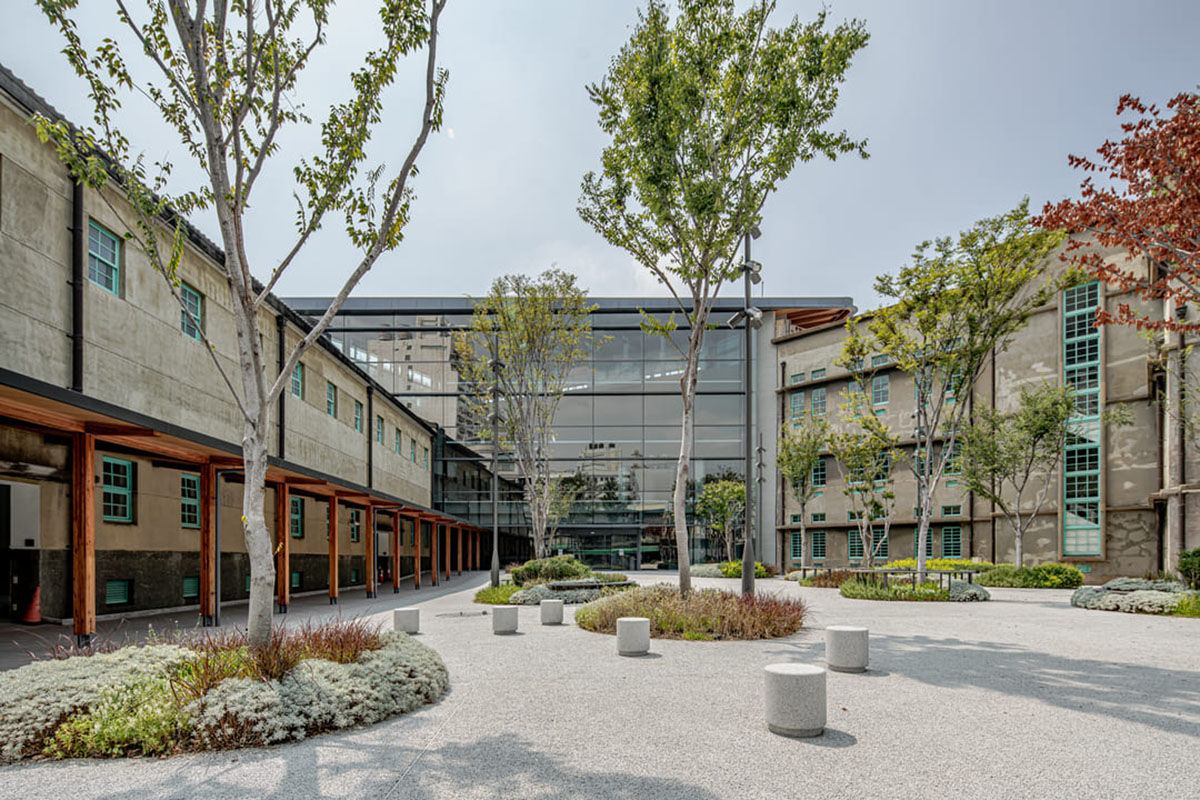 All images courtesy of Studiobase Architects.