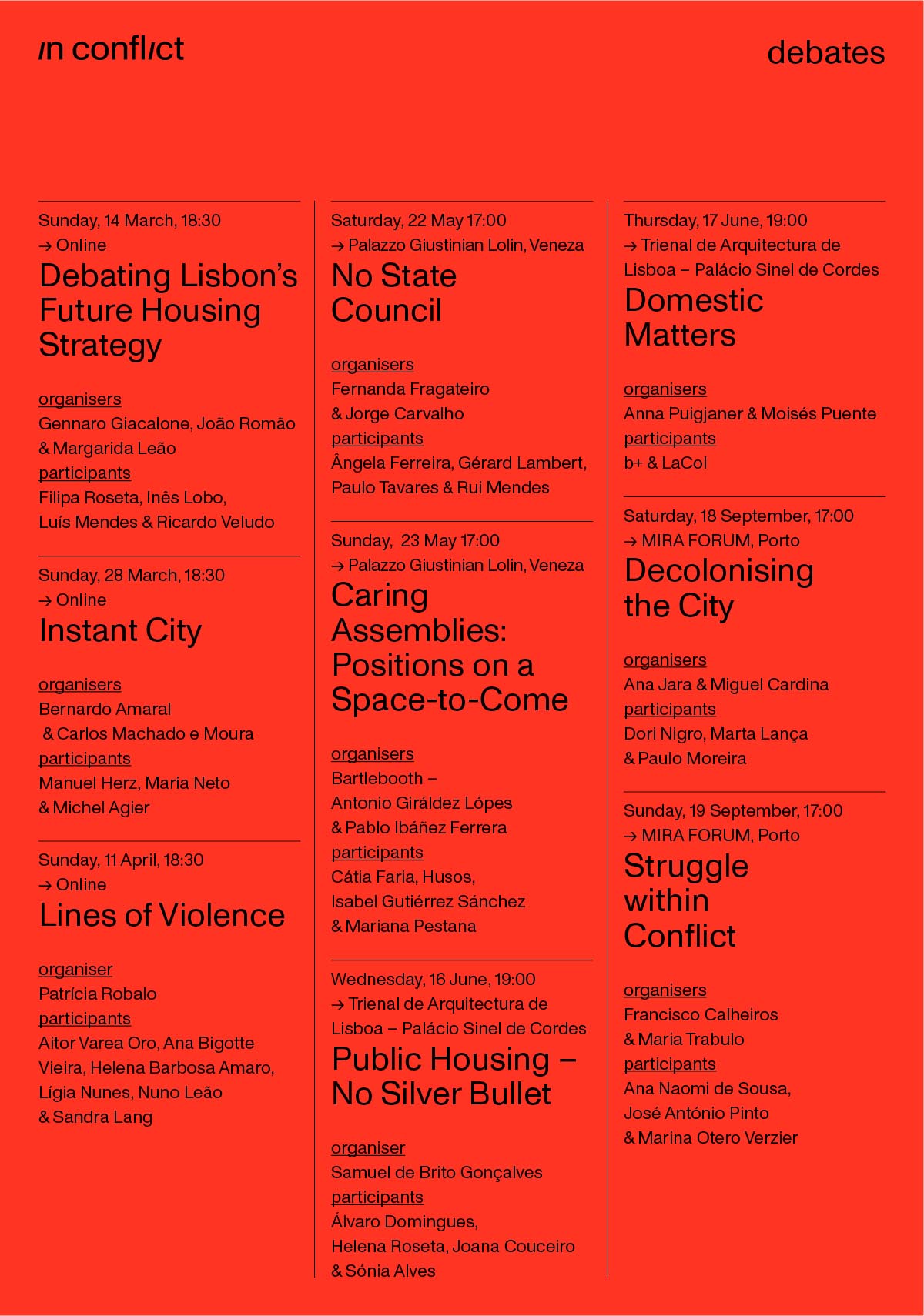 In Conflict, the title of the Portuguese curatorship at the Venice Architecture Biennale 2021, has published the calendar of its cycle of debates: there are nine events happening between March and September 2021.

The first three debates will be offered in an on-line format, on Sundays, every two weeks. The first debate, organized and moderated by Gennaro Giacalone, João Romão and Margarida Leão, will question the future of housing in Lisbon, in Debating Lisbon’s Housing Strategy, taking place on 14 March, at 6.30 pm. The speakers are member of parliament and architect Filipa Roseta, architect Inês Lobo, geographer Luís Mendes and councillor of the Lisbon Municipal Council, Ricardo Veludo.

The second debate, organized and moderated by Bernardo Amaral and Carlos Machado e Moura, which will take place on 28 March at the same time, intends to explore the role architecture plays in emergency construction that is currently used to accommodate refugee populations. Architects Manuel Herz and Mario Neto join anthropologist Michel Agier on the debating panel of Instant City.

The six other debates will be held in Venice, at Palazzo Giustinian Lolin, headquarters of the Portugal Pavilion, in May; at the Trienal de Arquitectura in Lisbon held at Palácio Sinel de Cordes, in Lisbon, in June and at MIRA FORUM in the month of September, in Porto.

The role of architecture in housing and infrastructure construction policies, the design of spatial care practices and contemporary domestic issues, the decolonisation of cities, and architecture of refugee camps are some of the issue on the table at these nine events.

The exhibition on display at Palazzo Giustinian Lolin in Venice, which will open on 22 May, completes the Portuguese curatorship of the 18th International Architecture Exhibition - La Biennale di Venezia 2021. There, In Conflict proposes to revisit a selection of processes of national architecture from after the 25 April revolution characterised by a wide-ranging public debate and by the involvement of political powers, the press and civil society.

Top image courtesy of In Conflict.