The augmented vision of architecture in the digital age 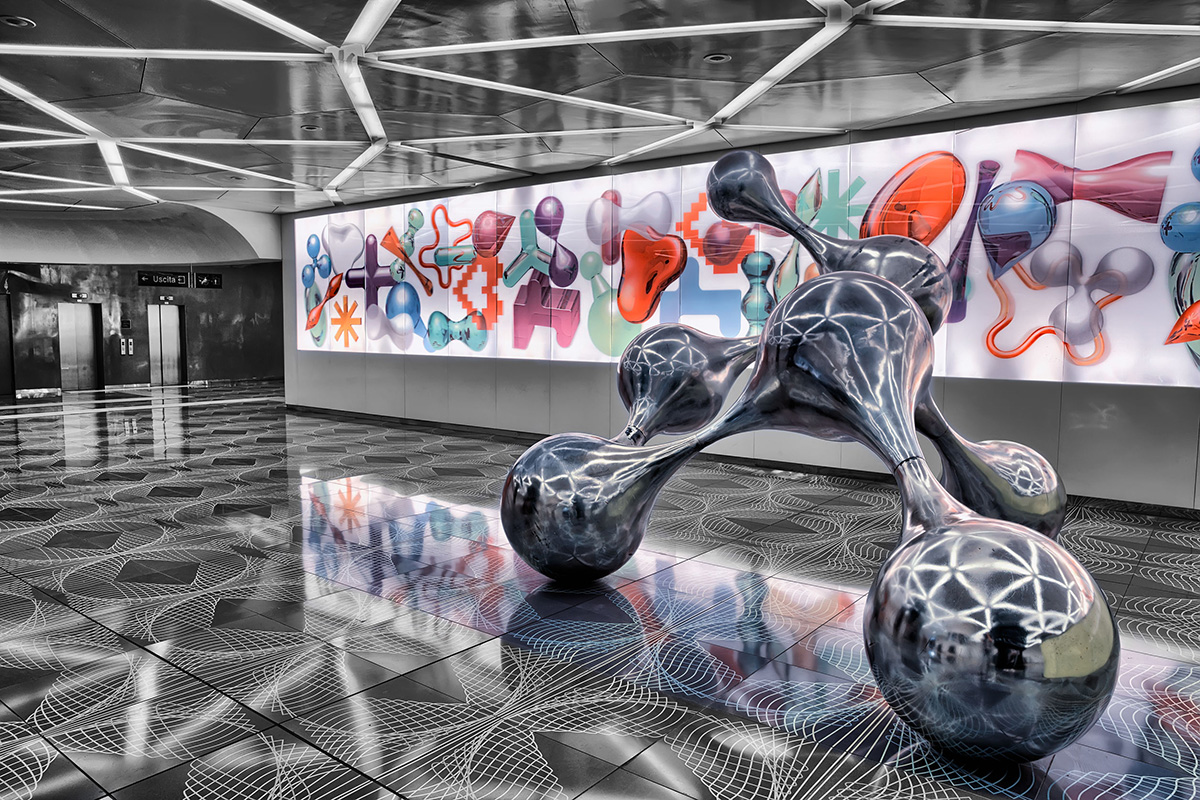 There is a strong gap in the phenomenology of architectural language between the mechanical and electronic era: “in the former, action and reaction were not strictly coordinated in time, the response was slow and delayed, the implications limited, and the consequences uncertain; in the second, instead, action and reaction are simultaneous, the effects are immediately evident, time and space abolished ”. Thus, as early as 1973, Bruno Zevi defined the extent of the transition to the digital age that we see today, which is considered by many to be only in its infancy. In recent decades, architecture has in fact evolved together with technological innovation to the point of overcoming the paradigm of masonry, so establishing a new relationship with man. 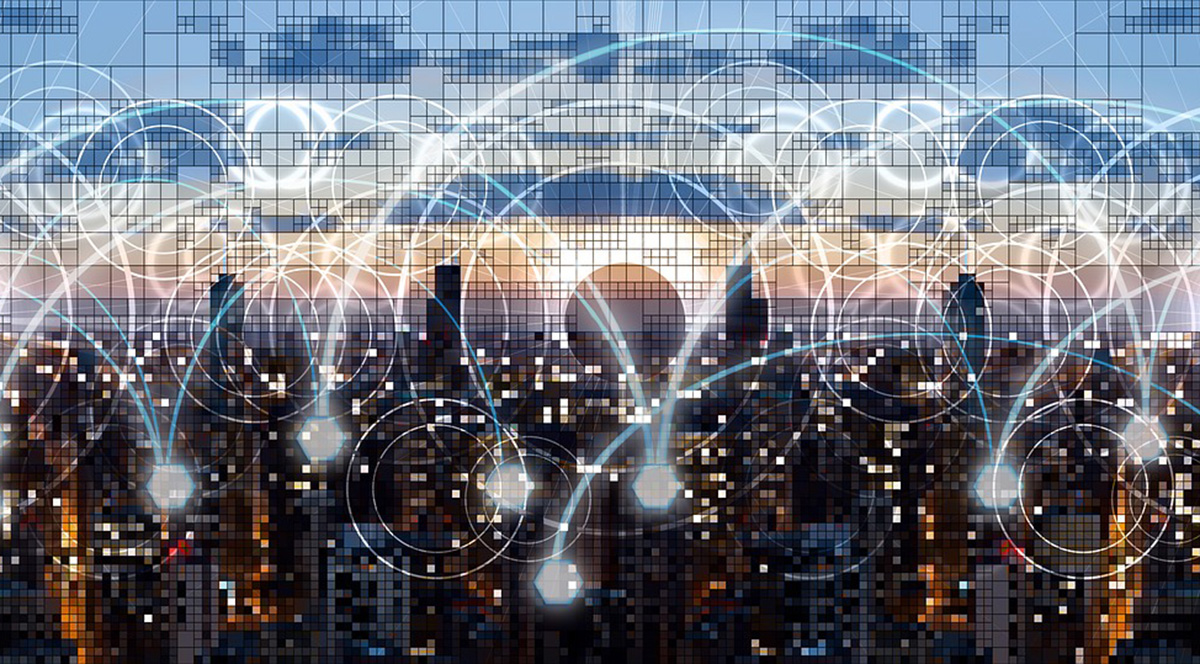 With the new millennium, architecture acquires the sociological extension of the mass media together with new forms of expression thanks to the immateriality of the cyberspace. Thus it extends the meaning of utilitas and venustas to a limitless expressive medium, while the aesthetic meaning of the firmitas  “dematerialize” itself. Architecture becomes a global communicative tool, an icon that transmits messages that can shape the way of perceiving and thinking "in an aggregation of elements in a continuous flow and without a specific sequence" (B. Zevi, “The modern language of architecture”). The relationship between man and architecture conquers a new way of sensory perception of spaces, an augmented vision that embodies the socio-cultural essence of the digital age, and that acquires new sustainable functions at the service of people or environment. Aesthetics and ethics, imagination and reality come together from design to construction of buildings and cities. 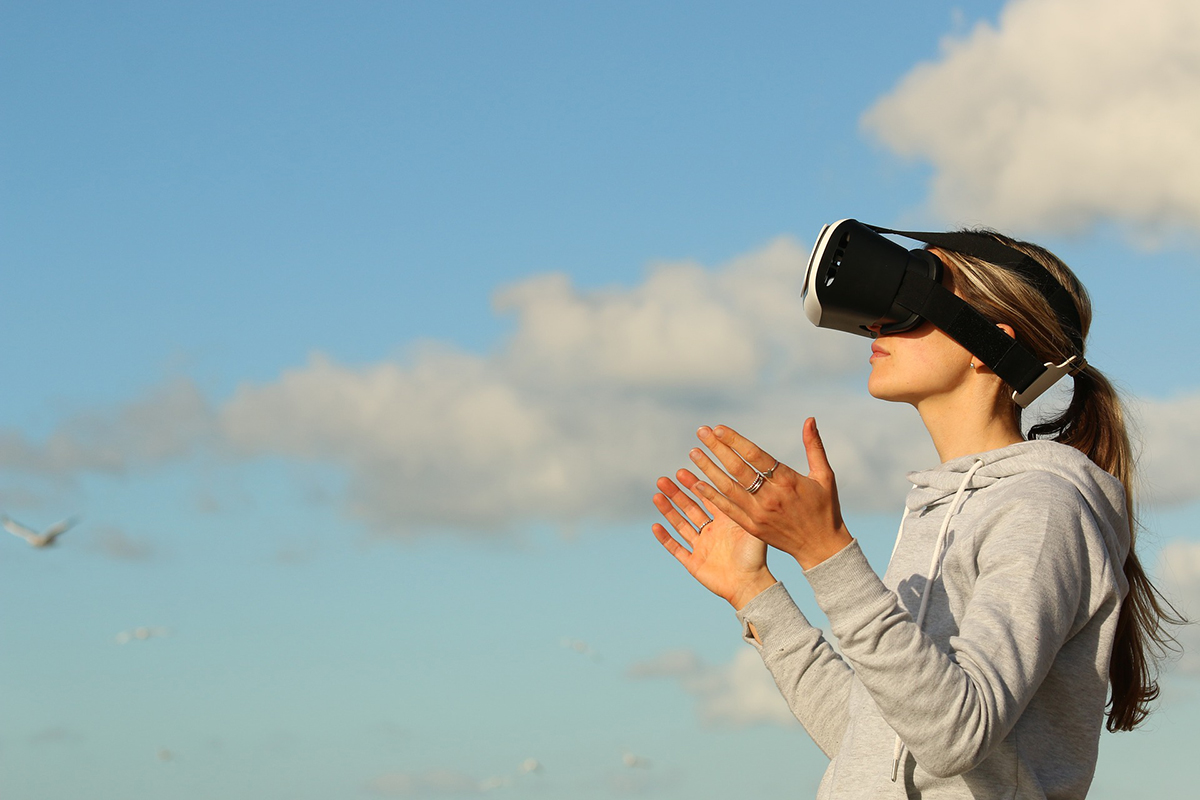 This is a general innovation that not only concerns the technological envelopes or the adaptive facades of new smart cities, but also a new set of boundless functionalities that re-evaluate the existing building heritage, also to enhance its social objectives. A scenario in which digital interactivity becomes a coveted corollary of new building projects or urban recovery programs. The "digital" becomes an added functional value that determines an indispensable “meaning”. 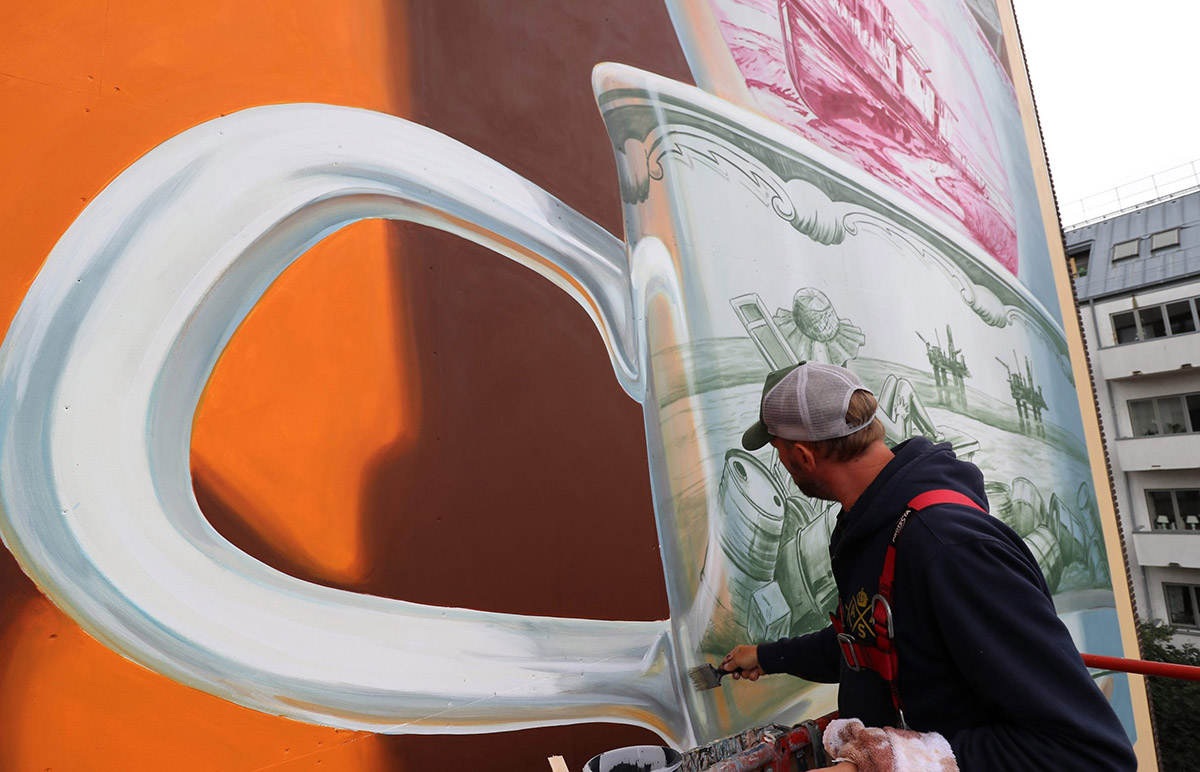 In this context there are many experiments and contributions from scientists, architects and artists with the common goal of combining the material with the immaterial. A final goal that is certainly possible thanks to technological innovation, but which requires an epistemic investigation on the abstract concept of the 4th industrial revolution, or rather an artistic interpretation of a new digital language. So today, for example, a new digital street art is born with a disruptive visual language that blends figurative arts and technologies in order to enhance its very function in a broad sense. Shattering, the creative project carried out just a few months ago in Sweden by Leon Keertells it: the street art painting on a building in Helsingborg depicting a stack of teacups about to fall. A metaphor that tells of the precariousness of nature; a mural that comes to life when interrogated with a digital application and that turns into a 3D animation, where the cups break into a thousand pieces with an explosion of splinters. 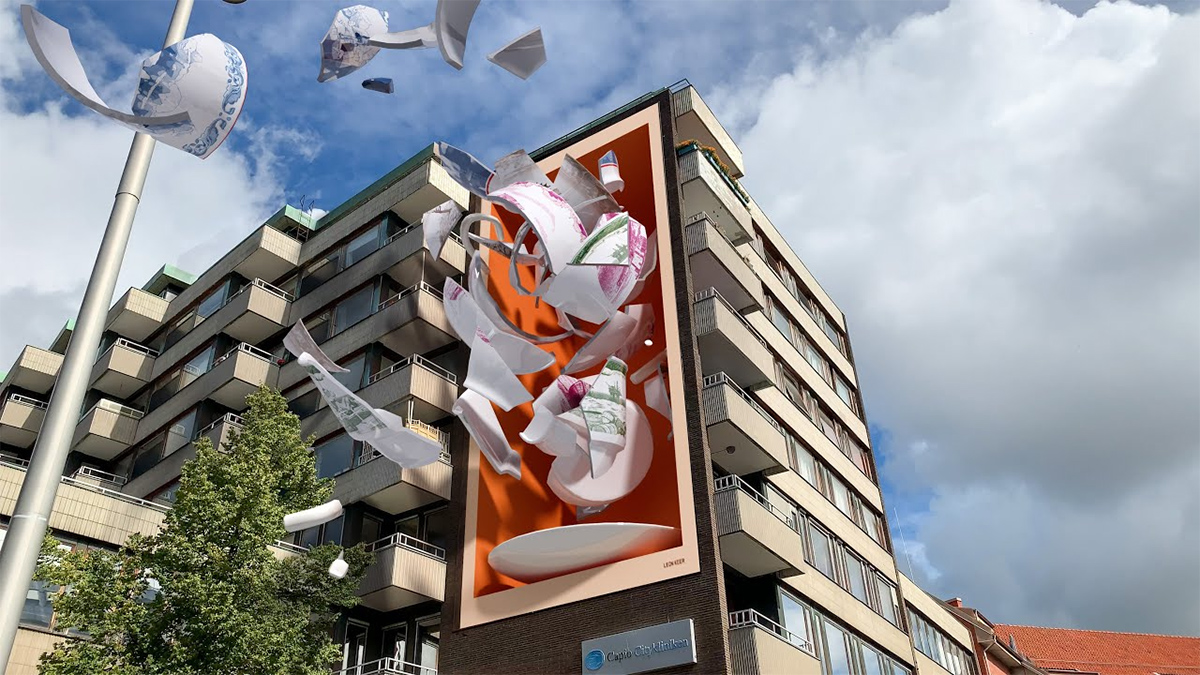 A trend that has also developed in Italy with new start-up initiatives that experiment with materials that "speak to people" to expand the potential of a social service associated with a new image of the building facades. Graffiti 4 Smart City is one of them. At Klimahouse 2020, this start-up represented how it is possible to redevelop the existing heritage through the use of thin bio-resin tiles, with "smart" decorative panels made with recyclable materials and technological devices that connect to smartphones. The idea of Salvatore Pepe, already winner of the Architizer A + Award in 2017 with his BioResin Tile, points to a POPular architecture that can renew environments through the materiality of biodesign and the interactive immateriality of technology. A goal aimed at creating a sort of 5G digital soul of buildings capable of providing services to citizens: from tourist information to administrative information, from vehicle parking support to information on separate waste collection.

The new technological solutions thus outline a trend towards a virtual infrastructure that allows new paths to recognize reality, with an ephemeral value, but also with powerful functionality and practical utility. An augmented reality that is becoming an Augmented City with new projects that connect the territory, such as that of the Italian homonymous startup that has created a 3D mapping of an entire city for the first time in the world. A digital infrastructure built a few months ago, which covers the approximately 117 km2 of the city of Bari, and which uses an 'Open Spatial Computing Reference Platform' (OSCP) technology to include information and images of more than 4,500 objects: monuments, buildings, businesses and services. With this application, it is sufficient to point the camera of a smartphone at a building to view the information in augmented reality: from historical data to resident companies, as well as reviews relating to catering or hospitality businesses. 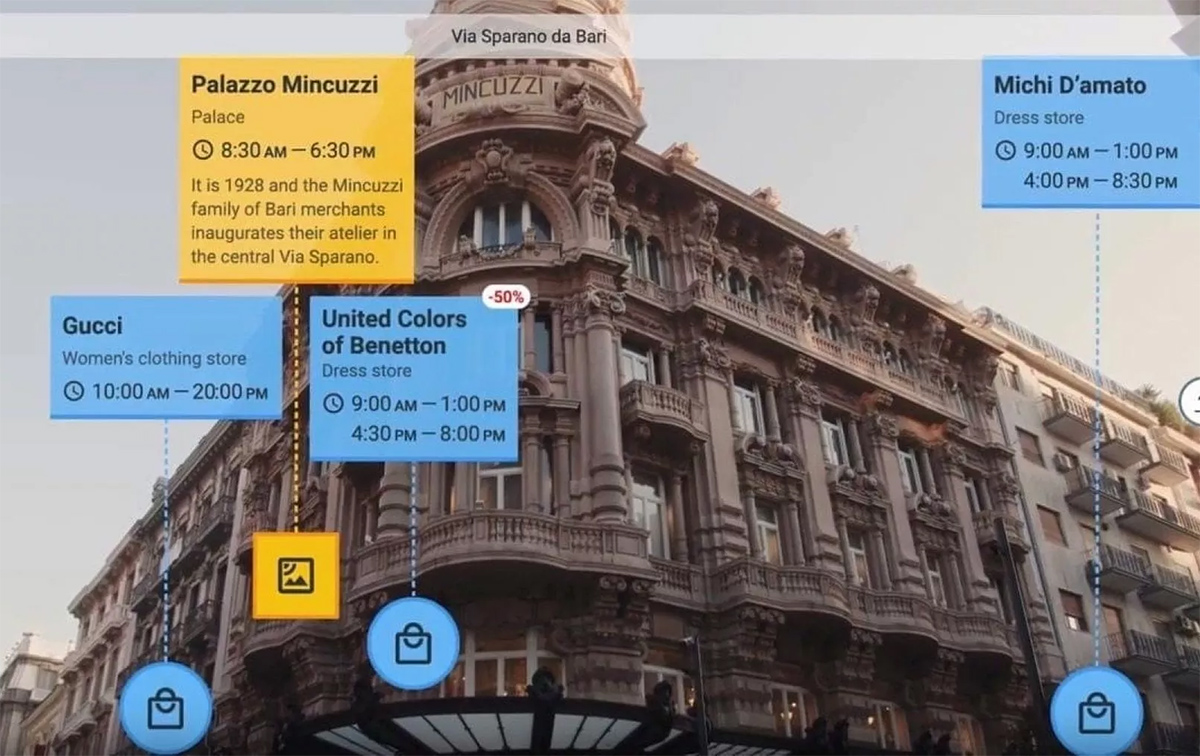 Augmented reality thus represents not only the future but also the present. It is available to everyone and can have a pedagogical and communicative value of primary importance in all areas and buildings of the city, as well as in cinema and art in general terms. Today it is spreading and growing even faster due to a pandemic that has actually accelerated the digitization processes to compensate for the restrictions caused by the lock down itself. From the Metropolitan Museum of New York to the Archaeological park Carnuntum, there are many museums already equipped with augmented reality that transforms the traditional methods of the cognitive visit into a multisensory experience enriched with additional information and interactive content. In Italy, the 7 museums in Varese and the Sforzesco Museum in Milan can now be visited in AR mode even by visually impaired people thanks to an application that facilitates the viewing of the works by zooming or increasing the contrast. The Brescia Foundation, on the other hand, is launching a project that will soon allow visitors to make a journey through time in augmented reality, and which will thus make young people passionate about the study of history. The revolution of digital thinking thus accelerates without distinction of genres. Rational and artistic thought intertwine, contaminate and converge with each other. The very form of architecture changes genetically and becomes immersive right from the design stage. The dimension of design thinking becomes virtual as it has never been, capable of simulating a detailed reality of information, useful for generating more informed decisions with respect to aesthetic, functional, energy, environmental and sustainable parameters. In this way, architectural language absorbs the space-time vocations of digital phenomena and, through the architect's individual metabolic process, participates in the creation of a new modern message. Even considering that the new speed of digital technology collides with the calm of thought reflection, the same design thought feeds the predominant cultural flow that is always looking for new meanings and features. This is why Architectural Language acquires such an augmented vision that it interprets the idea of impermanence, as expressed by Enrica Tulli in her last book: Echoes from the future, to govern "an ever-changing flow of information, capable of being read in a multiform and simultaneous way". A vision that thus embodies the fluidity of a design thought with a new capacity for action and creation of new meanings. A concept that so represents the augmented vision itself of the digital age. 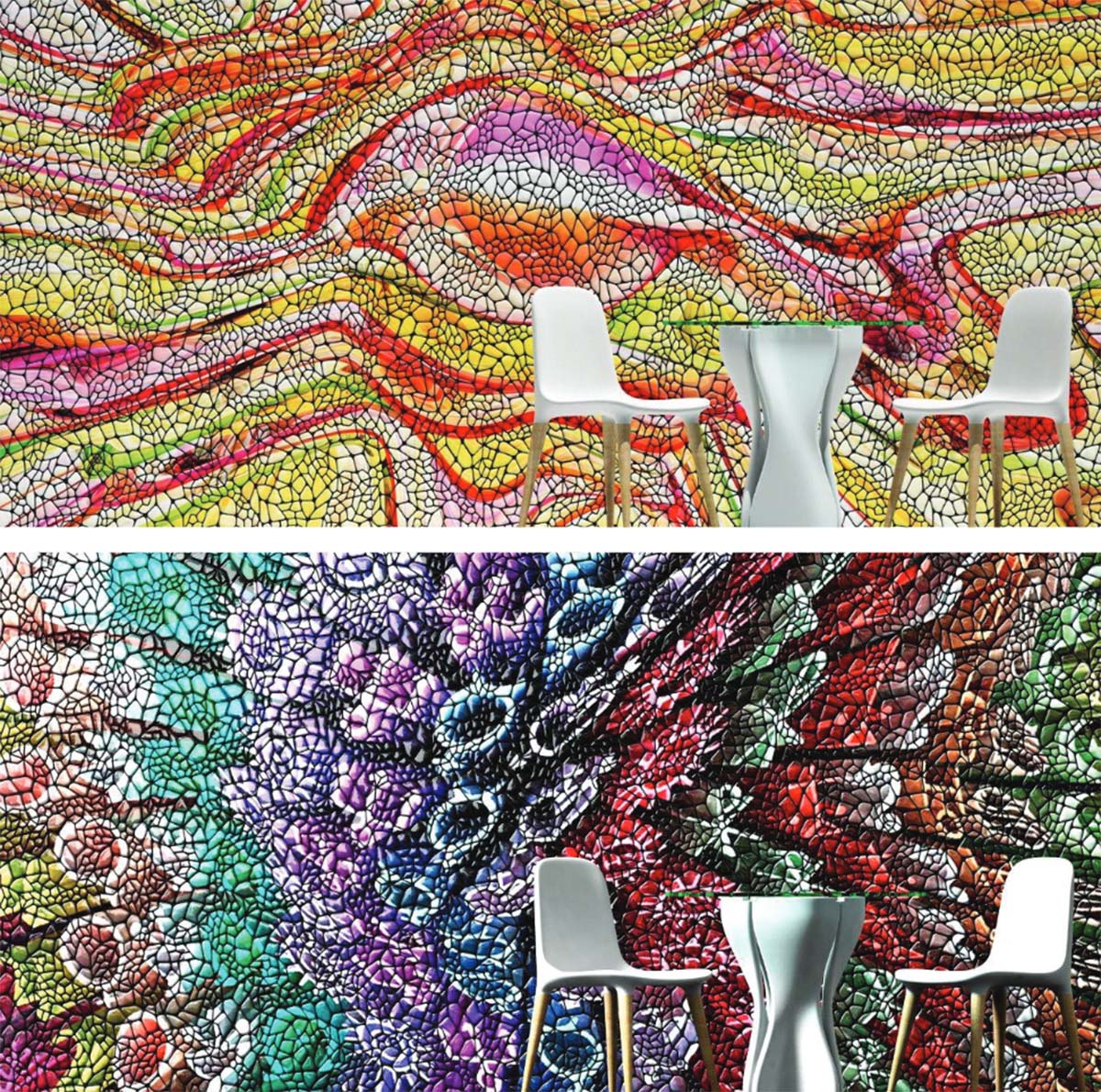