An Architect's ABCD: A Visual Syllabary Through The Lens Of An Ardent Artist 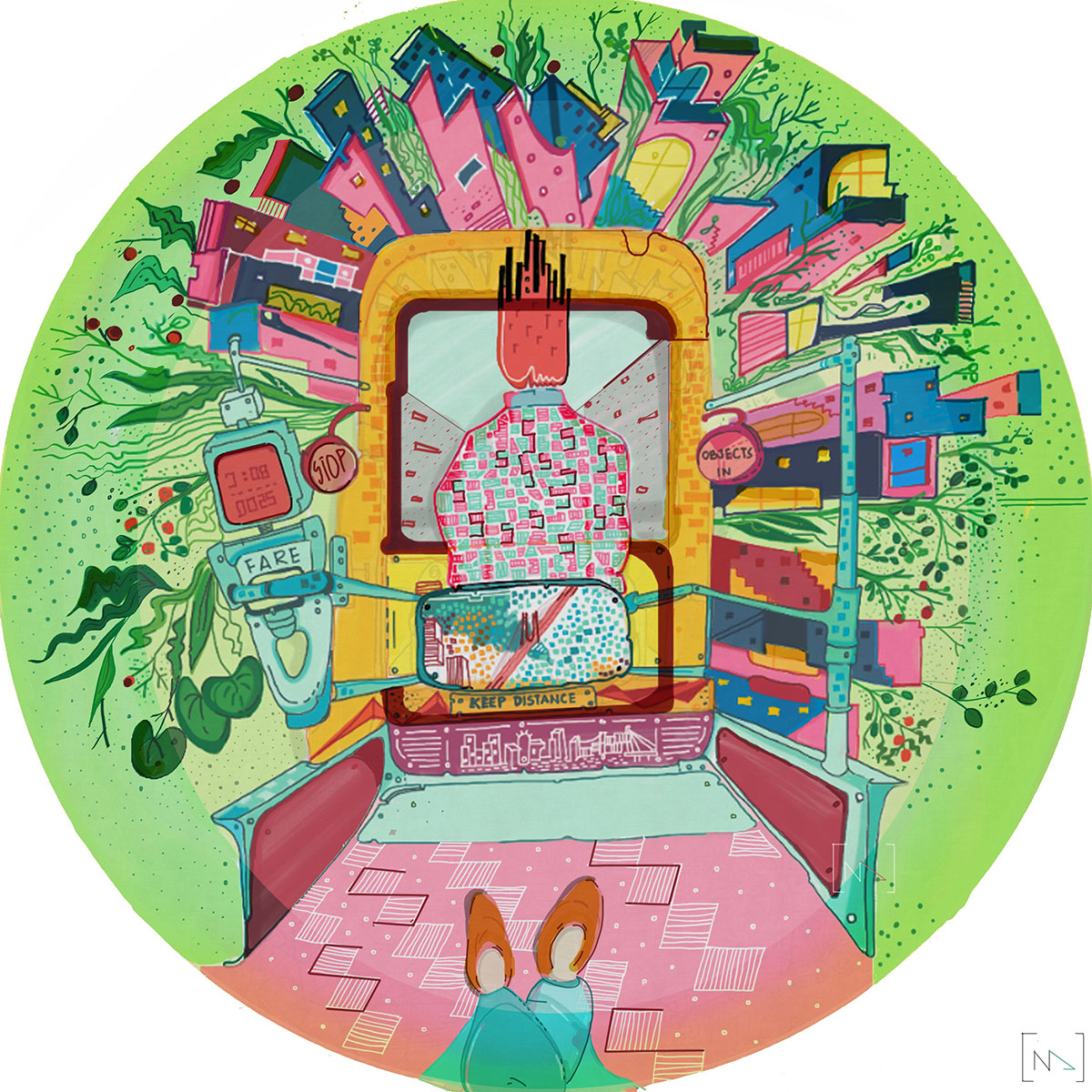 Inspired by the #36 days of type project, Nikita Mahajan, an ingenious Architect, Illustrator, and artist stages 'Alpha-Spaces' a series of whimsical spectacles within the mundane, by using letters from our everyday speech. Through her vibrant and collocated typographical art, Nikita attempts to celebrate the everyday ordinary elements that explore into a complex investigation; What might possibly happen when ‘Reality’ meets a ‘Constructed Landscape?’

Remember, ‘A’ for apple and ‘B’ for Bat? Learning syllabary in a language is at the foundation of any forms of communication; But how about the ABCD of an architect? From a young age, we foster practices to enunciate and associate alphabets with visuals, stories, and objects in order to convey ourselves. Over the course of time, we develop our own vocabulary and words that become our tools of personal expression. Similarly, ‘Architecture’ as a profession has always had its unique and peculiar argot. Through her series 'Alpha-Spaces' she originates her own architectural jargon and creates powerful visual associations translating into her distinctive spatial language.

By amalgamating different words, Nikita paints a visual construct, that stages an eye-pleasing yet unseen ‘Utopia’. Using her creative lens, she fabricates a built environment that is hidden in the shadow of the familiar present. ‘Alpha-Spaces', not only beautifully illustrates various scenes from our every day but also, paints a strange paradoxical urbanscape, which is everything but ‘Your-Everyday’.

According to Nikita, she describes her work as, "The chaos that leads into a deep quest, of exploration and discovery of a unique kind of order." The playfulness within the artwork weaves various alphabets within complex narratives entailing wide diversity of events.

Can you spot the alphabet in these dreamy Alpha-Spaces? Give, it a try! Anomalysea(Anomaly +  Sea)
Anomalysea embodies a structurally fabricated seesaw with peculiar anomalies, that defies gravity and all familiar norms of mother nature; this upside-down piece of architecture responds to one's mental weight and not physical weight. When the emotional burden is released and placed on the opposite end, it allows you to fly instead of drowning in the sea of thoughts. 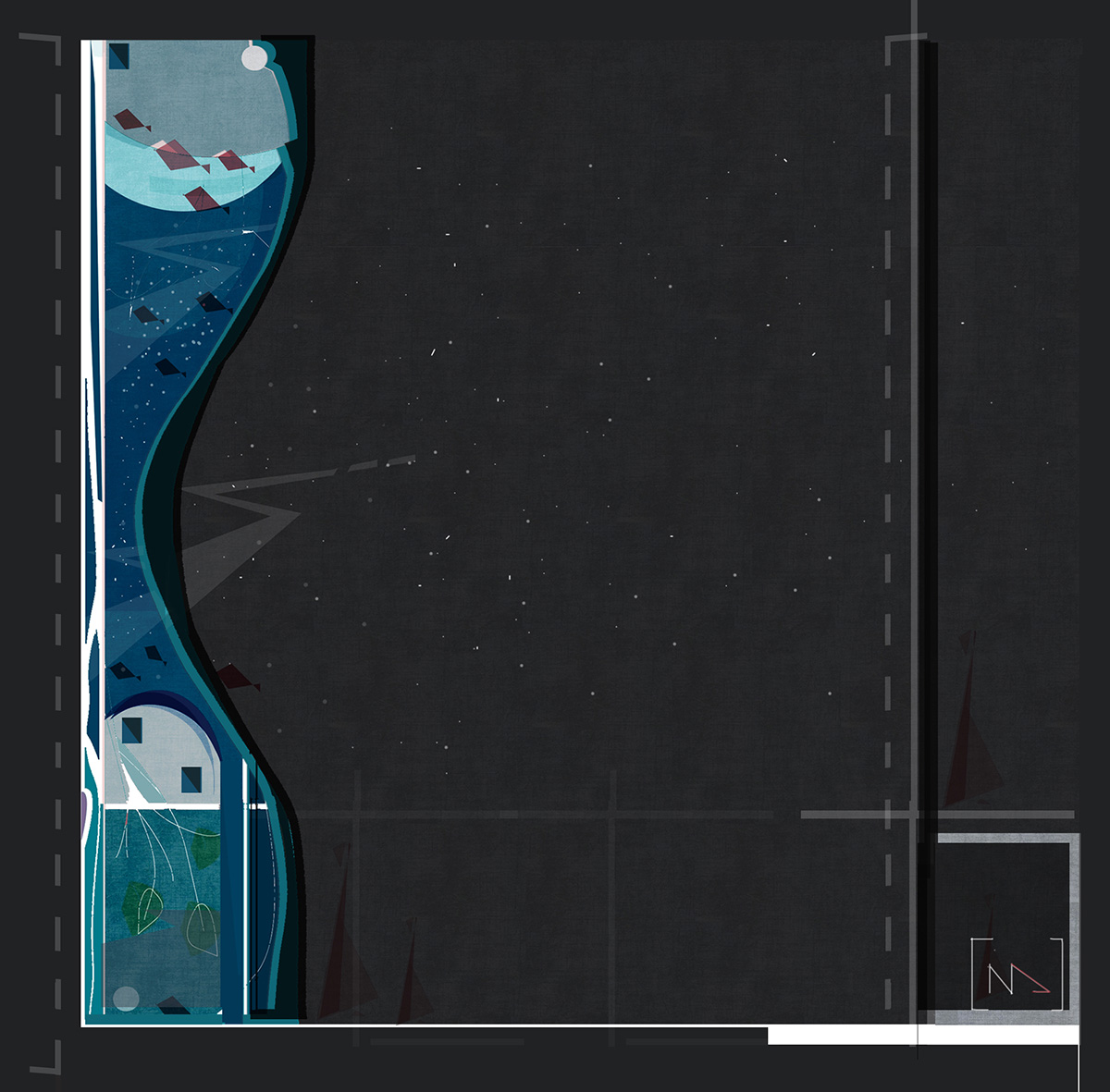 Ancient Alchemists were of an opinion that an hourglass symbolized the concept of balance, as two triangles gently stabilize themselves on one another to create an optimum balance; metaphorically the alchemists believed that these two triangles epitomized two aspects of nature, the top being the sky, and the bottom being earth. Nikita's Balancescape depicts these two beautiful yet contrasting landscapes, and separates them by a doorway, giving it a unique sense of space bound by the scale of time. 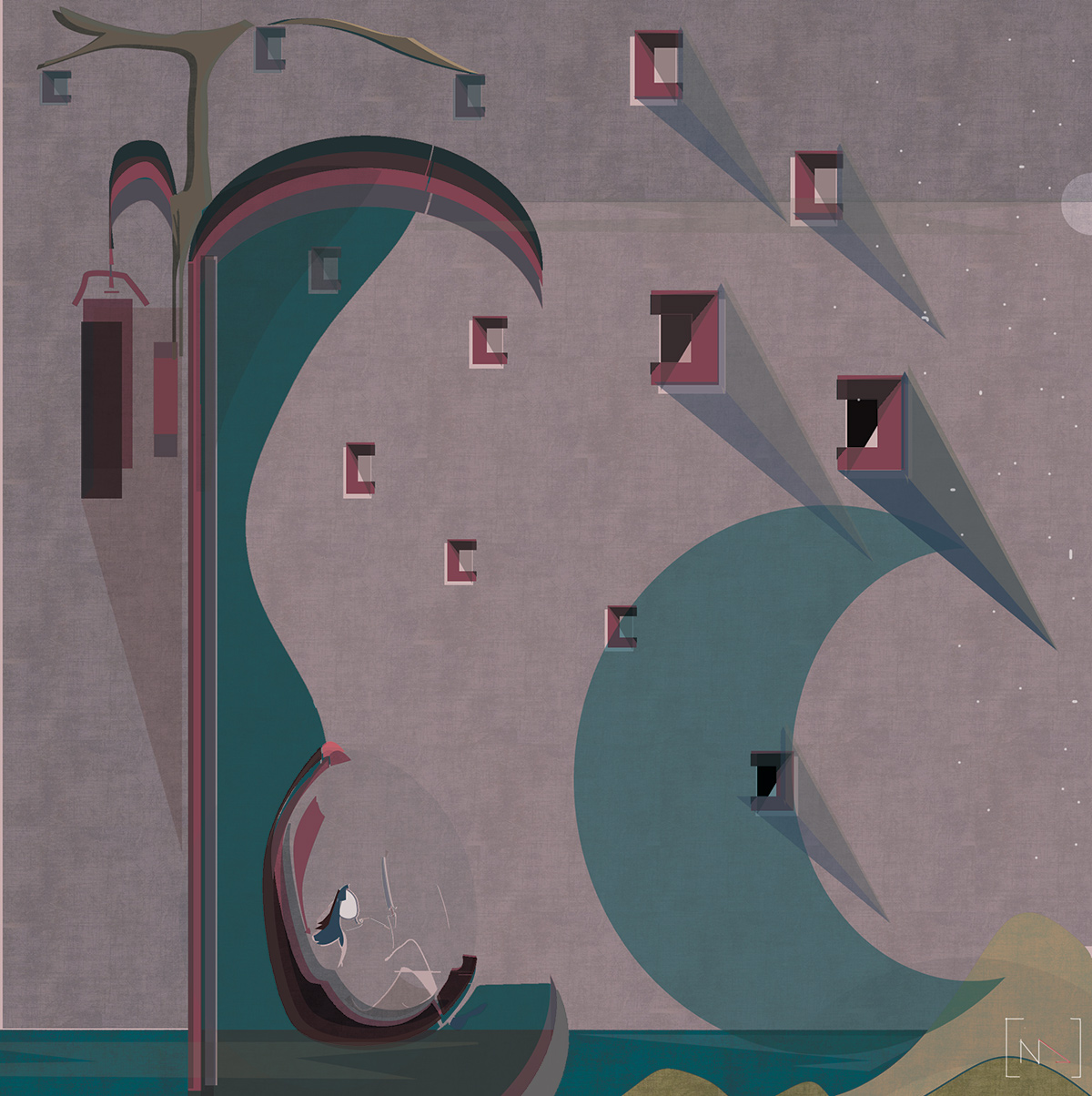 ‘Capsulade' represents a facade that is beyond the mere two-dimensionality of a surface, crowded with windows. The Capsulade is an assemblage of various capsules replacing the typical fenestration seen on a building; these capsules are in fact volumes filled with live events, and stories of its users. Through this Alphaspace, Nikita's vivid imagination paints a twilight facade absent of any building profile, expanding the elevation to infinity and beyond. 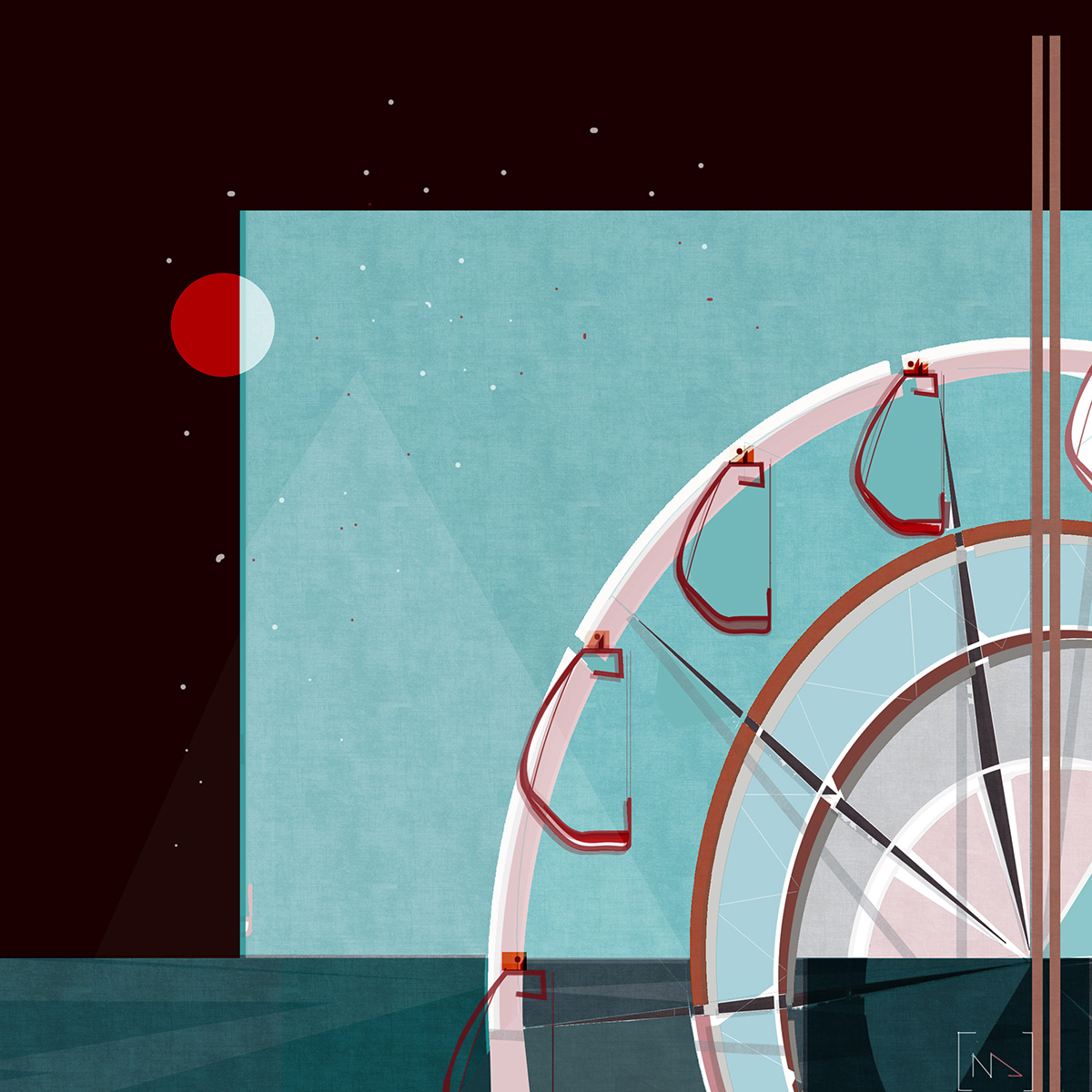 Keeping one's desires and dreams in motion, the dream wheel is a kinetic piece of structure moving persistently through its high thrills and dull low points, resulting in a stimulating built form situated at the horizon, where day meets night and reality meets fiction. 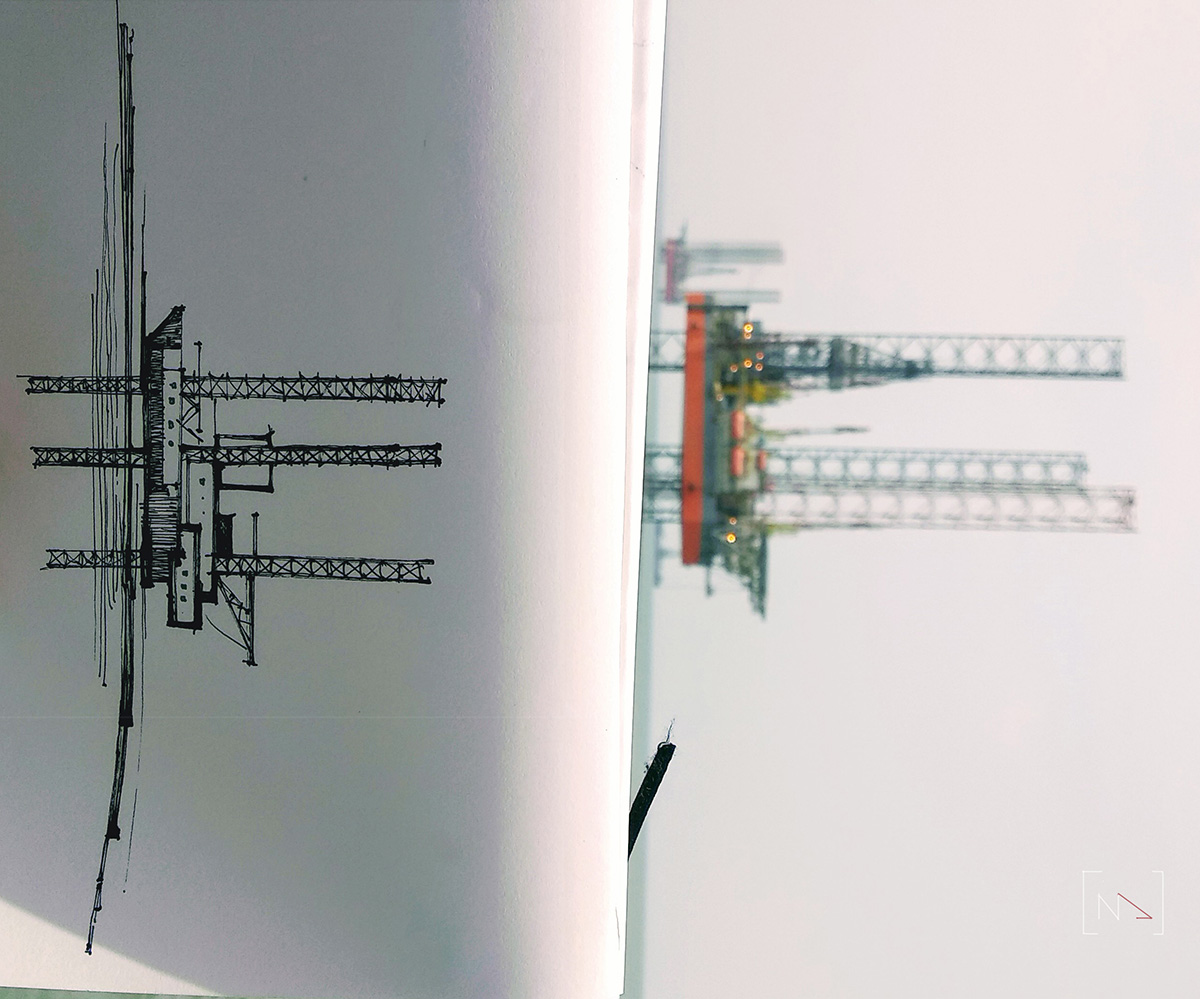 "Es-cape" are suspended structures resting above the water, letting you escape 'Above' and 'Beyond' rather than entering 'In' or 'Out'. 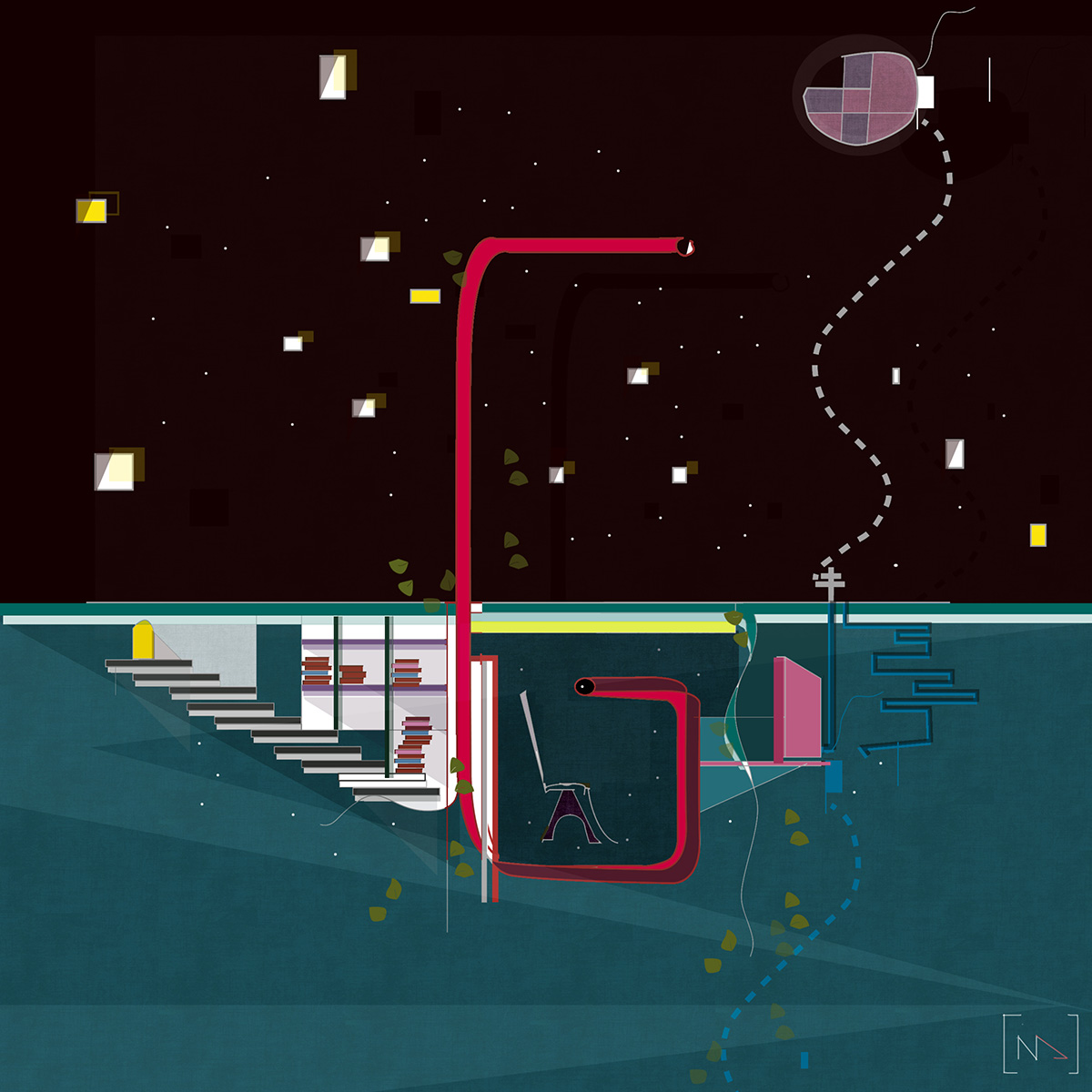 A submerged space for observation, that prevents direct line of sight, yet offers a scenic view over, above, and around its place of dwelling. Despite the absence of openings, Groundcontroloscope offers everchanging panoramic views across any direction, at any given time. Instead of crowding and adding volumetric forms above sea level, this tends to be a spatial environment carved within the ground. In the rapidly growing trend of building higher and taller, Nikita attempts to stay grounded. 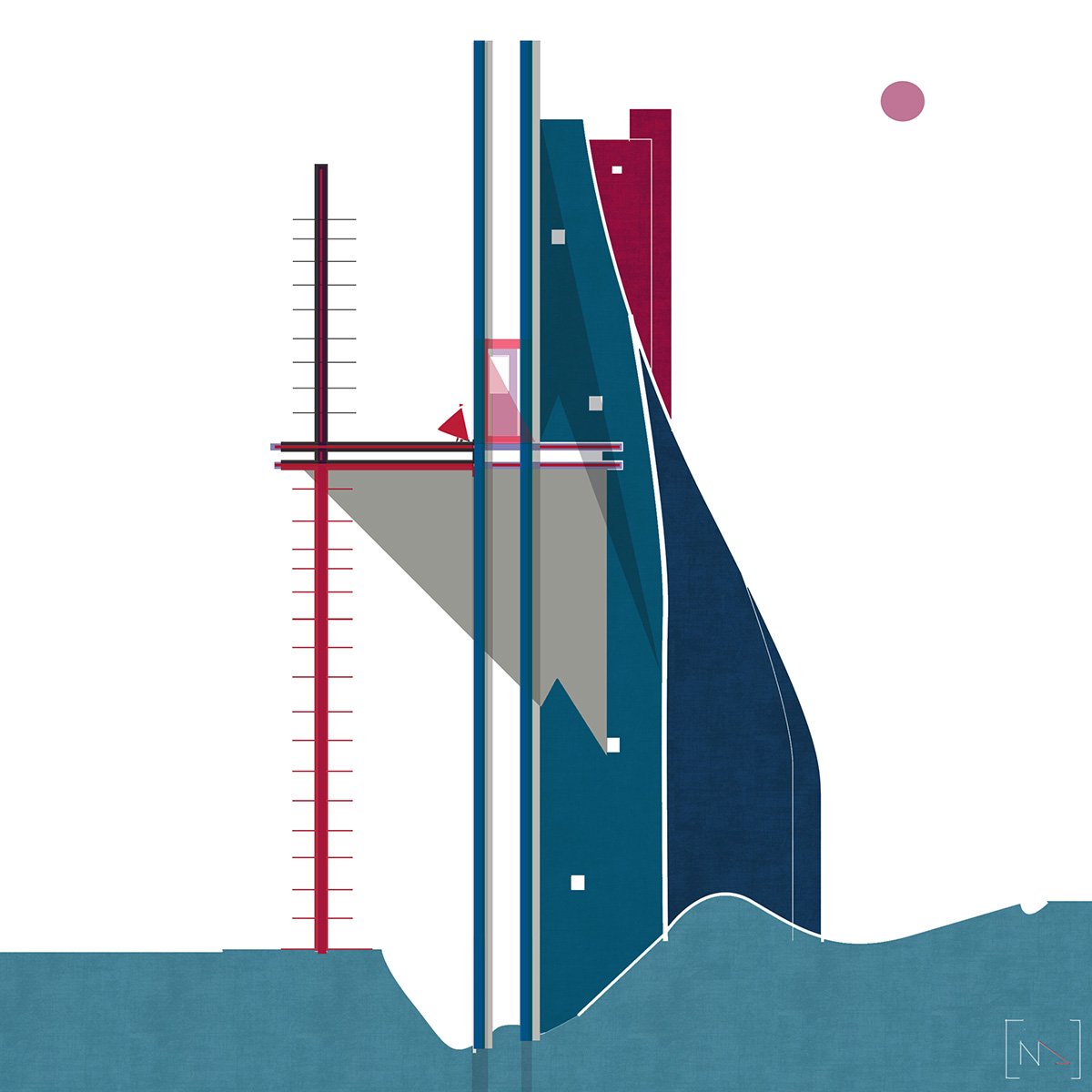 'Hydrovator' an enclosed compartment housed in a long deep shaft allowing one to travel lower and lower underneath the earth. Unlike the Elevator that shoots one up onto the pinnacle, the Hydrovator travels through the water leading to the foot creating a subtractive space. 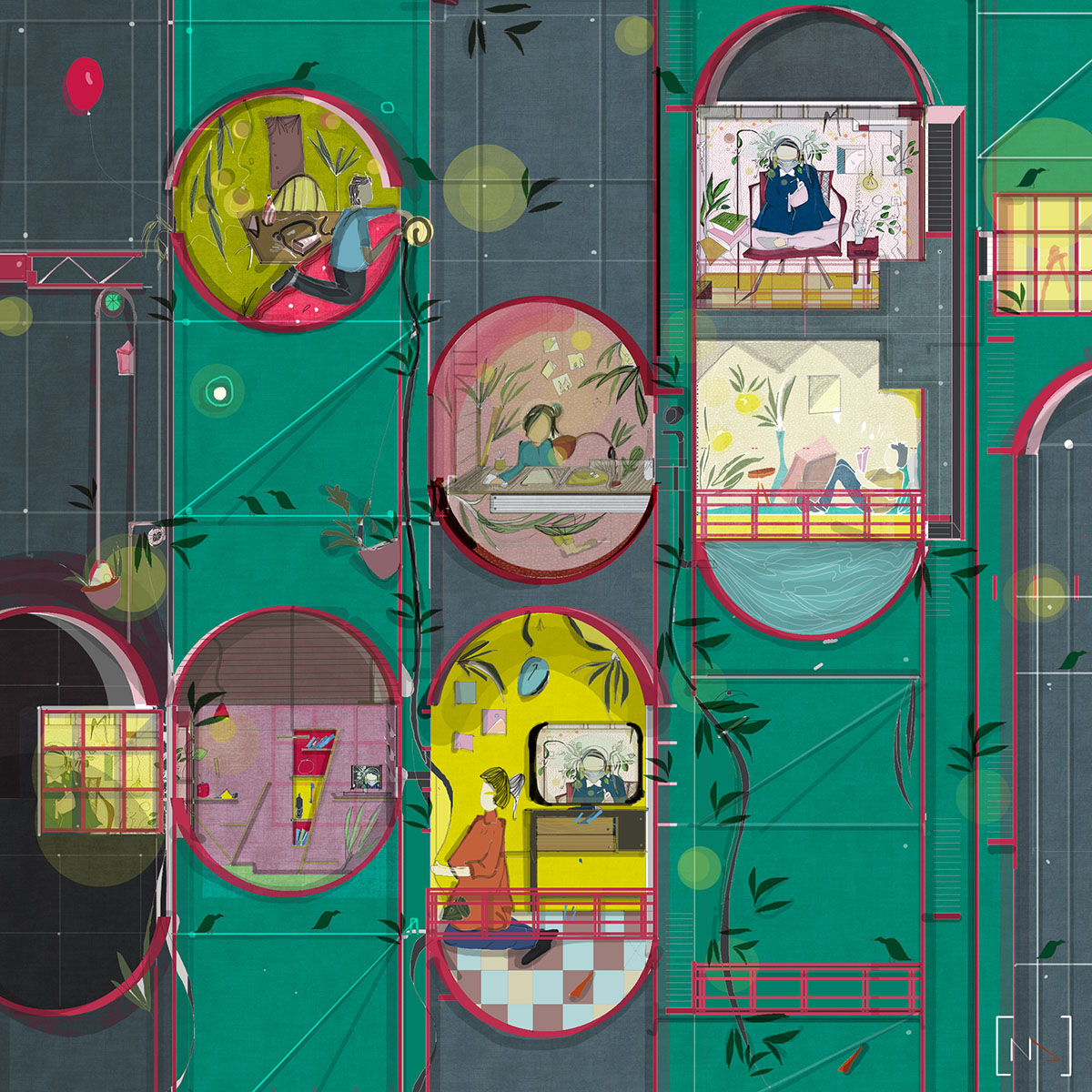 Unlike windows that open into a wide panoramic view, Nikita's Joie de vivre is a narrowscopic view looking inwards into the pleasures of living in well-balanced spaces that thrive in an environment of community along with a mix of intimate spaces for self-reflection, resulting in the immense joy of life. 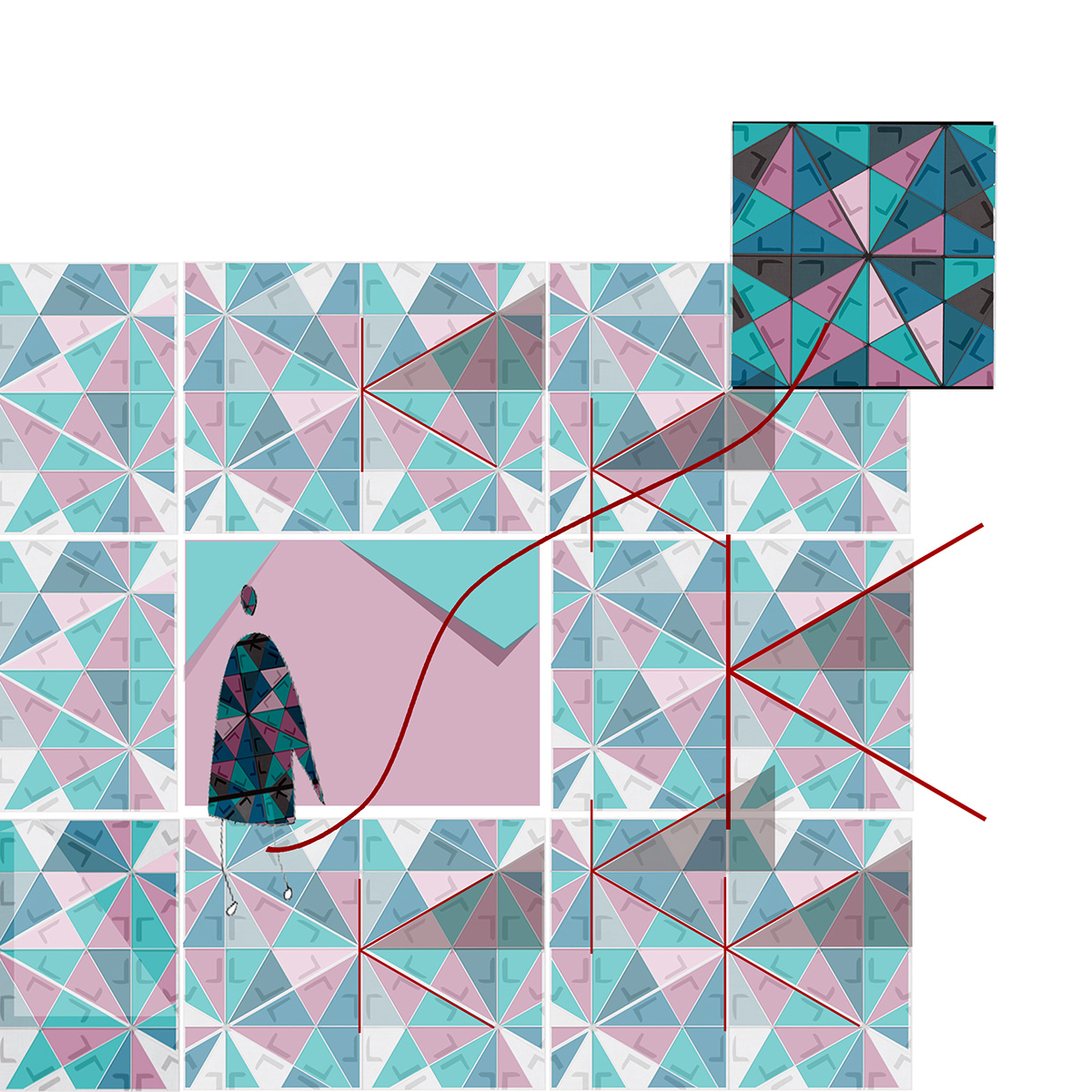 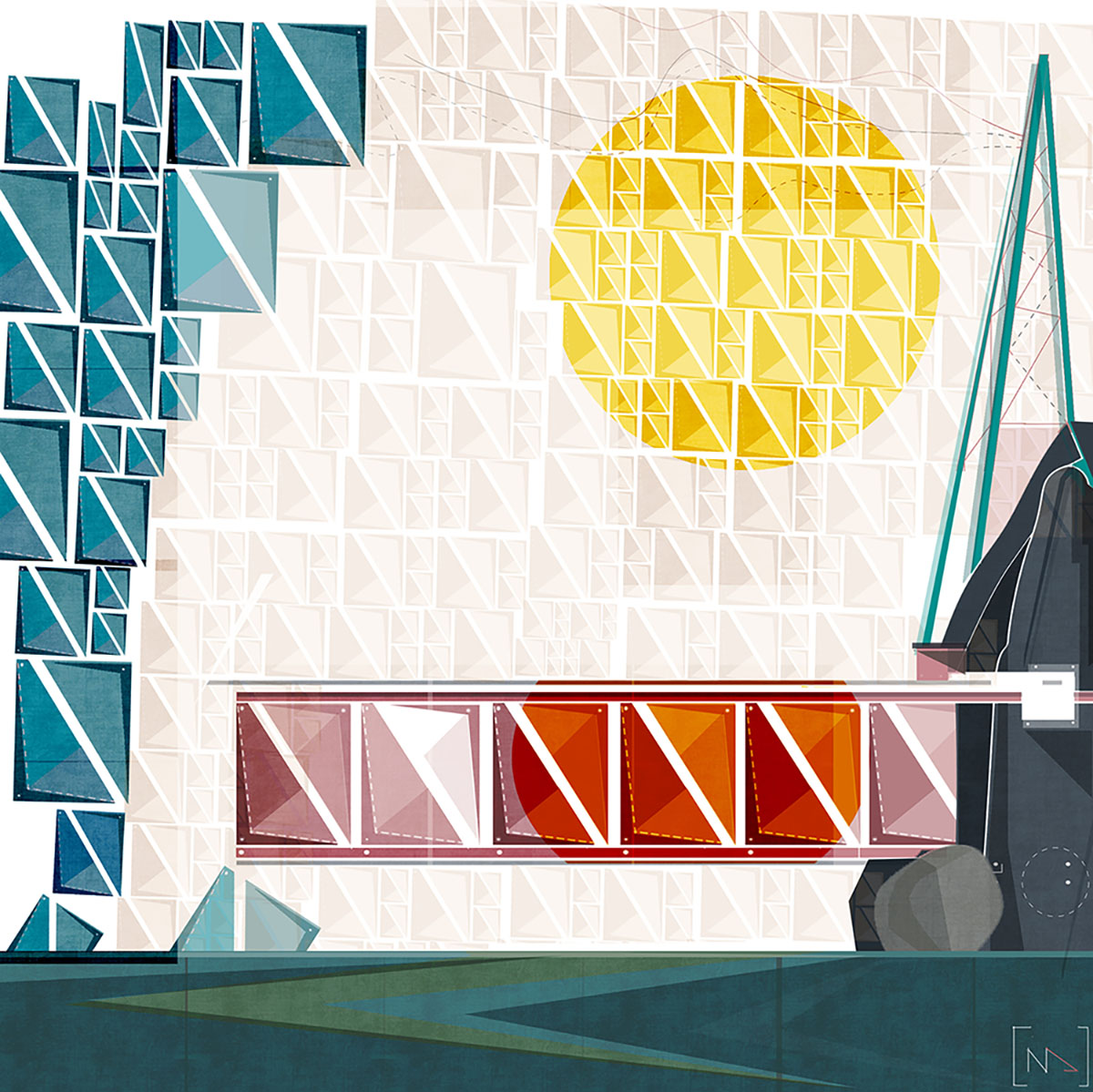 A dense network of negative spaces, where the ground is more prominent than the figure itself, the background foreshadows the foreground and the implicit spaces outweigh the explicit spaces, creating a playful yet intricate networkscape. Neworkscape further highlights the spatial process of architecture, where one creates positive spaces as well as designs functional negative spaces. 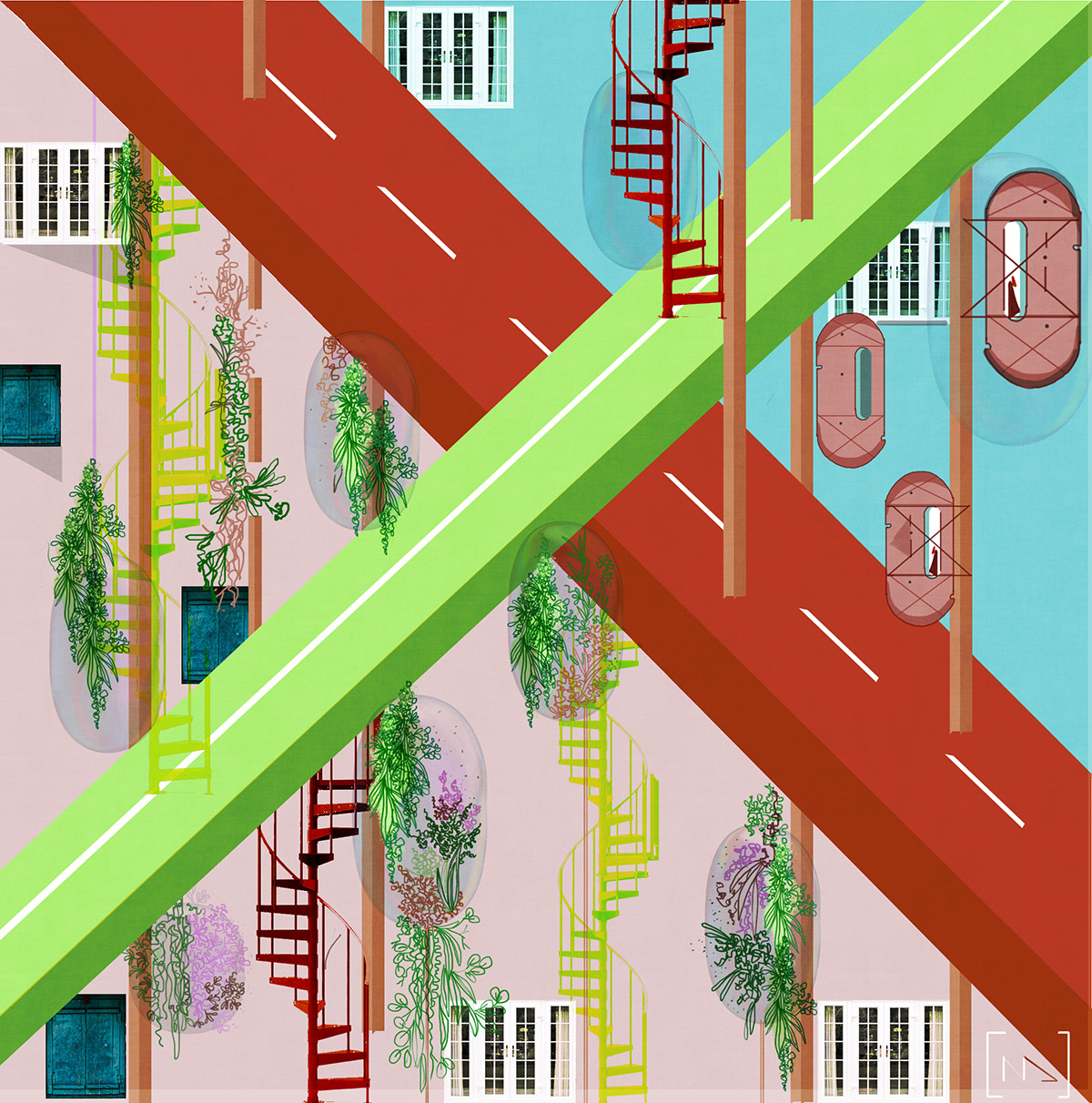 An expanding metropolis, in the name of development, is often subjected to constant experimentation and innovation. While some experiments emerge as a success, others result in serious damage calling for immediate repair. With the perpetual cycle of trial and fixation, the cities soon develop visible imprints of these developments, creating multiple layers of infrastructure and transit. 'Xperimend' is thus an urbanscape that is an outcome of persistent manmade attempts to evolve with time. 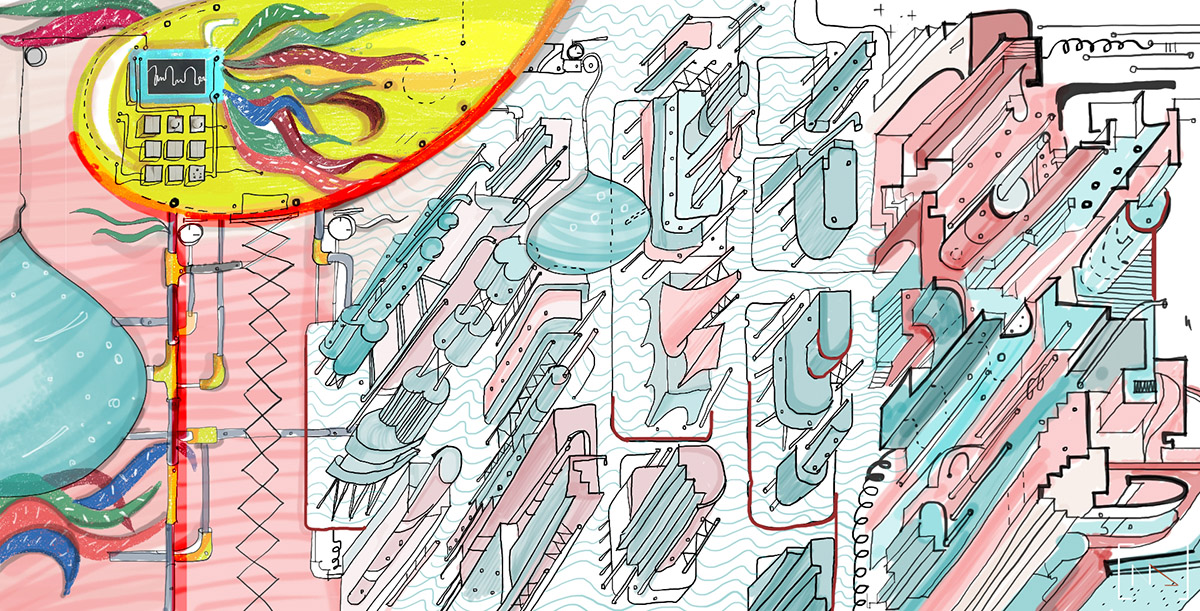 Yacht City, an Alphaspace in response to the aggravating climate crisis which results in an utterly submerged city. In a scenario like so, accommodations move from a city full of buildings to a city full of lodging yachts attempting to keep up with the fluctuating levels of flooding in the city. 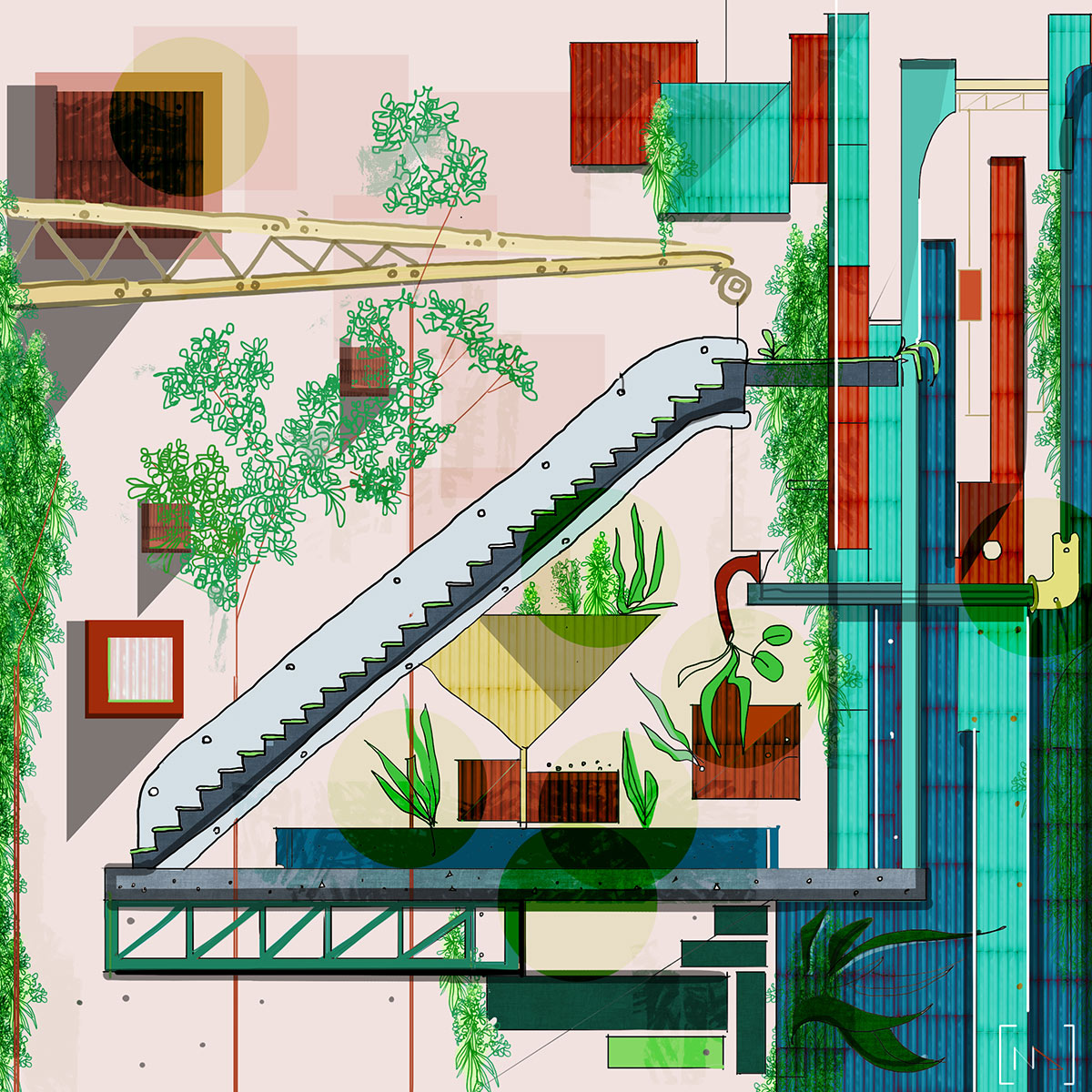 Retrogradation is a process, where at a given point in time the planets appear to reverse their position or time in the orbit. Zerograde is an attempt to make the planet reset and go back in time, where it generated zero waste enabling it to retrograde back to a healthy and sustainable habitat.Zerograde is a fictional Alphaspace that redefines the process of creation & construction to recreation & reconstruction by consistent reuse.

Through these futuristic Alphaspaces, Nikita attempts to construct a dictionary of spatial narratives by juxtaposing two terms that celebrate the 'extraordinary' in the 'ordinary'. Alphaspaces is a series that does not restrict itself within a canvas but extends beyond infinity, enabling its viewers to place themselves within the whimsical space itself. In Nikita's words, “Alphaspaces are created at the intersection of Imagination and Realism.”

Check out the complete and comprehensive series of “Alphaspaces" here.