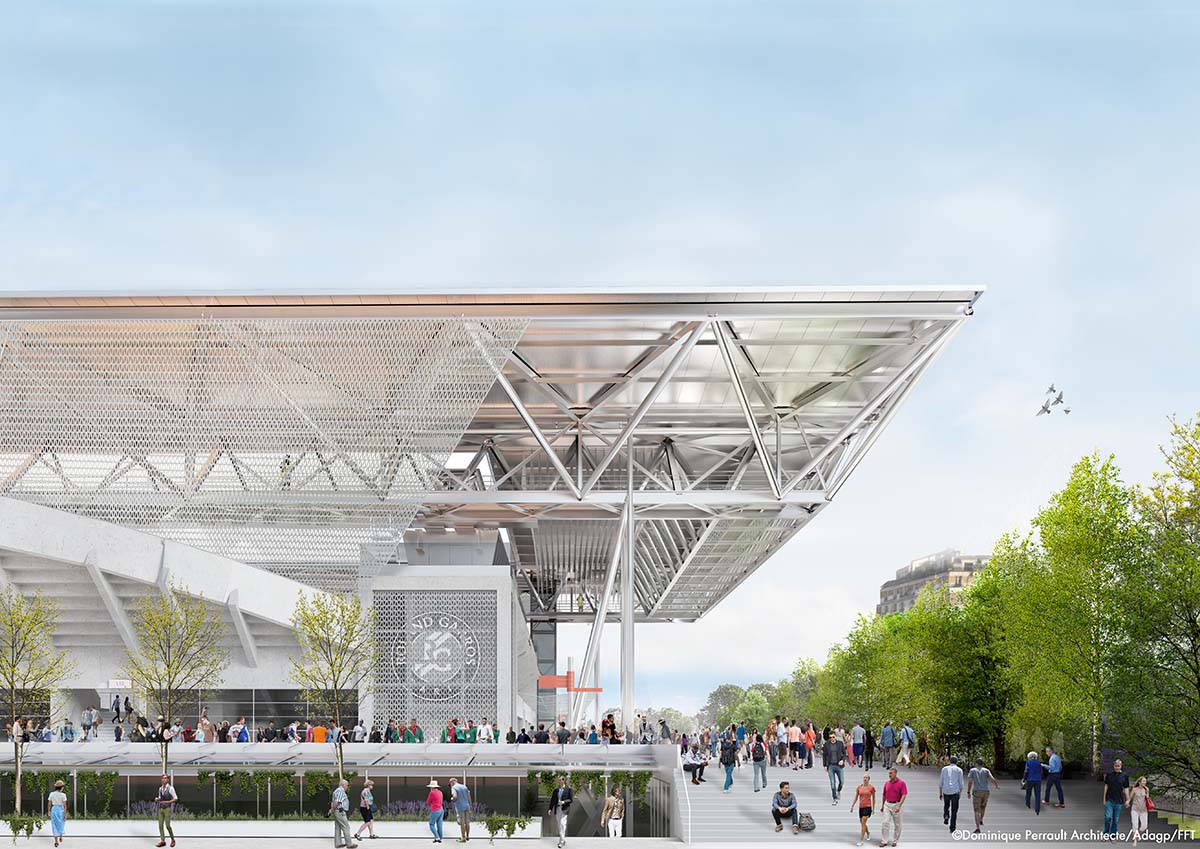 The architectural project aims to bring an additional value to the “French Open” site, in line with the work done previously with the retractable roofing of the Philippe Chatrier court and the construction of the new Simone Mathieu court, in the Auteuil glasshouses sector.

Dominique Perrault was one of WAC's guests in WAC's Live Interview Series, Dominique Perrault, who is the General Director of the 2021 Seoul Biennale of Architecture and Urbanism, spoke to WAC about "CROSSROADS Building the Resilient City", the theme of Biennale.

WAC's exclusive interview with Dominique Perrault can be watched on IGTV. 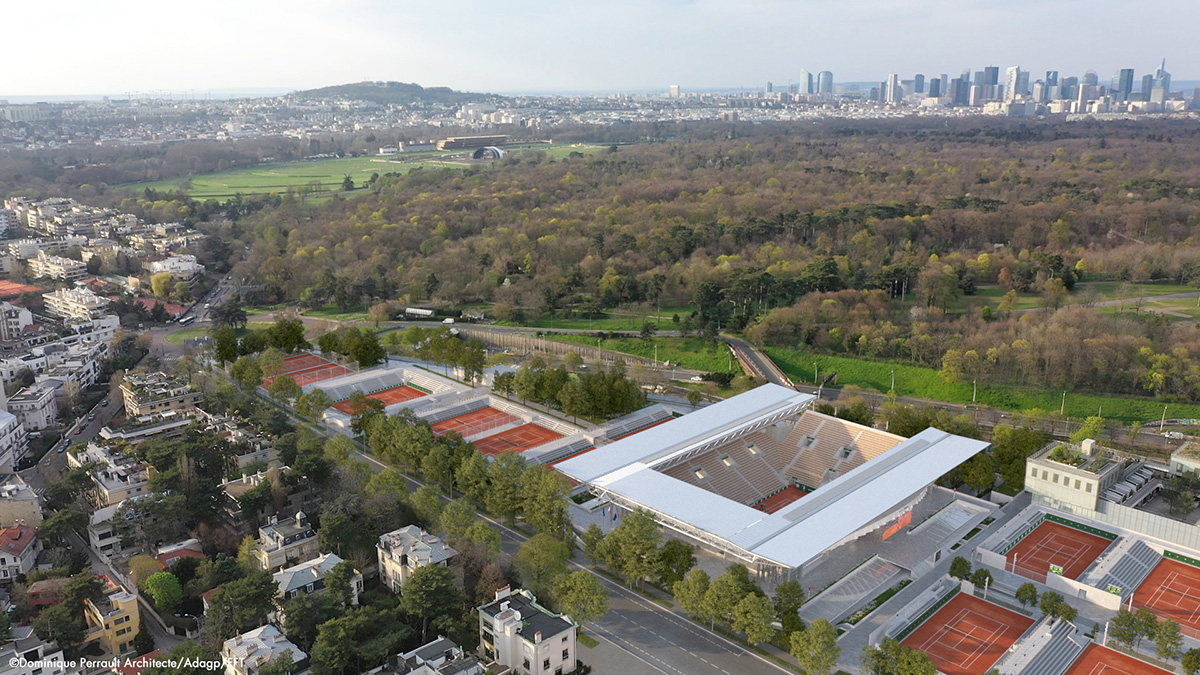 As the press release highlights, Perrault's "architectural intervention not only creates a roof but also proposes a large-scale architectural ensemble whose silhouette dialogues both with the surrounding landscape and the architecture of the existing building."

"The roof appears to levitate above the court, and preserve the integrity of the existing volume by defining a U-shaped pure and technical structure, open to the peaks of the Bois de Boulogne."

Above the existing stands, the cover comprises a mobile part, made of canvas, inspired by the pleating of a fashion piece, and a fixed part that provides support for the mobile roof and integrates all the necessary equipment for its rapid unfolding and folding. 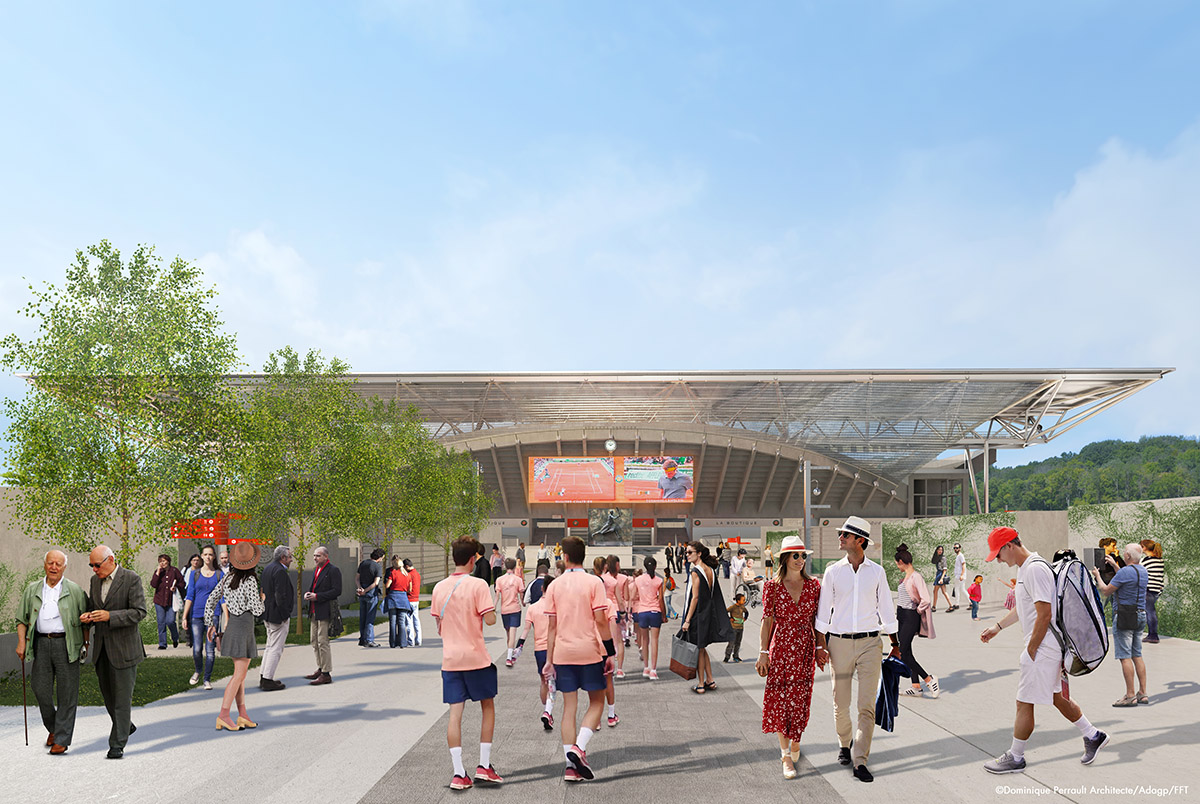 Dominique Perrault's project consists of a set of technical solutions adapted to specific challenges. The main function of the roof is to shelter the suzanne Lenglen court and all public seating from the rain. it is also about protecting from the wind and controlling the shadows cast by the roof on the court so as not to disturb the players.

The project is intended to be pure and without artifice, resulting from the structural efforts implemented.

The architects kept the structure as pure, minimal and fully apparent as possible, and proceeds by a fine assembly of steel elements on a concrete structure. 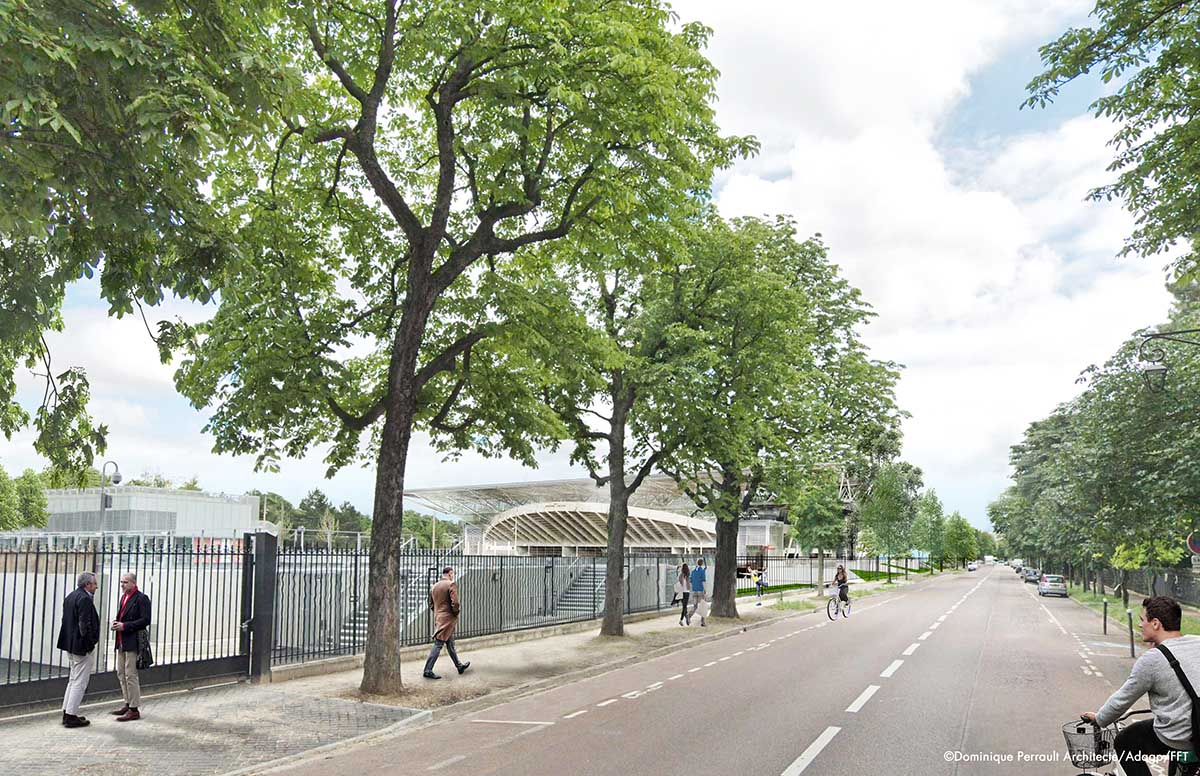 "By creating a dialogue between a new flat horizontal surface and the existing curves of the side stands, the project enhances the geometry of the Suzanne Lenglen court," said Dominique Perrault Architecture in a project description.

"The new cover of the Suzanne Lenglen court seems to levitate over the court. His relationship to the existing building helps preserve its architectural integrity."

The U-shape of the fixed part of the roof covers the stands on three sides (west, east and south) and completely opens the view to the north and the Bois de Boulogne when the movable roof is folded. 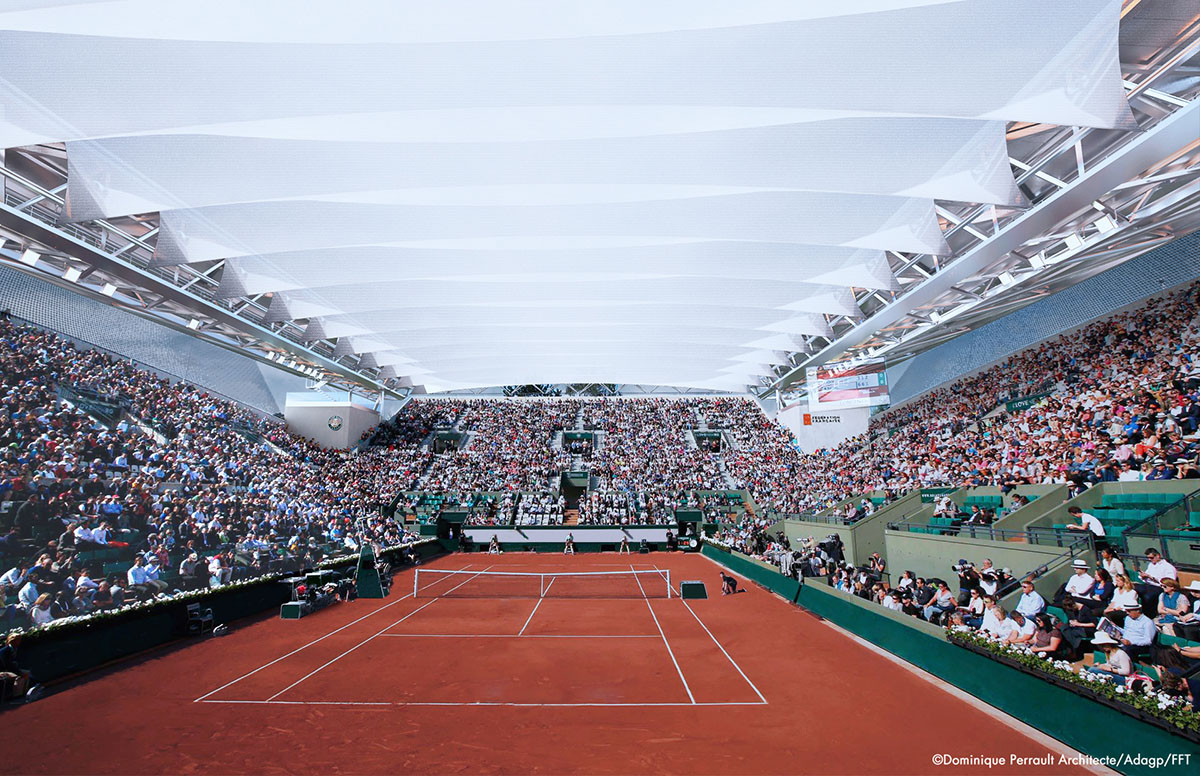 The two east and west arms of the U, with a span of 87 meters, integrate the rails and locking mechanisms of the movable roof, while the south section forms a storage box for the folded roof and integrates the winch and the motor for the activation of the unfolding mechanism, thanks to a moving buton.

The studio said: "the constructive system of the steel structure is mainly based on the bolted assembly."

"Laterally, a mesh fabric, fixed at the top to the longitudinal beams and at the bottom to the existing concrete stands, encloses the bleachers.

"Made of stainless steel, the mesh offers resilience and simplicity to the project. it emphasizes the curve of the stands and protects the highest bleachers from weather changes, while allowing light to pass through." 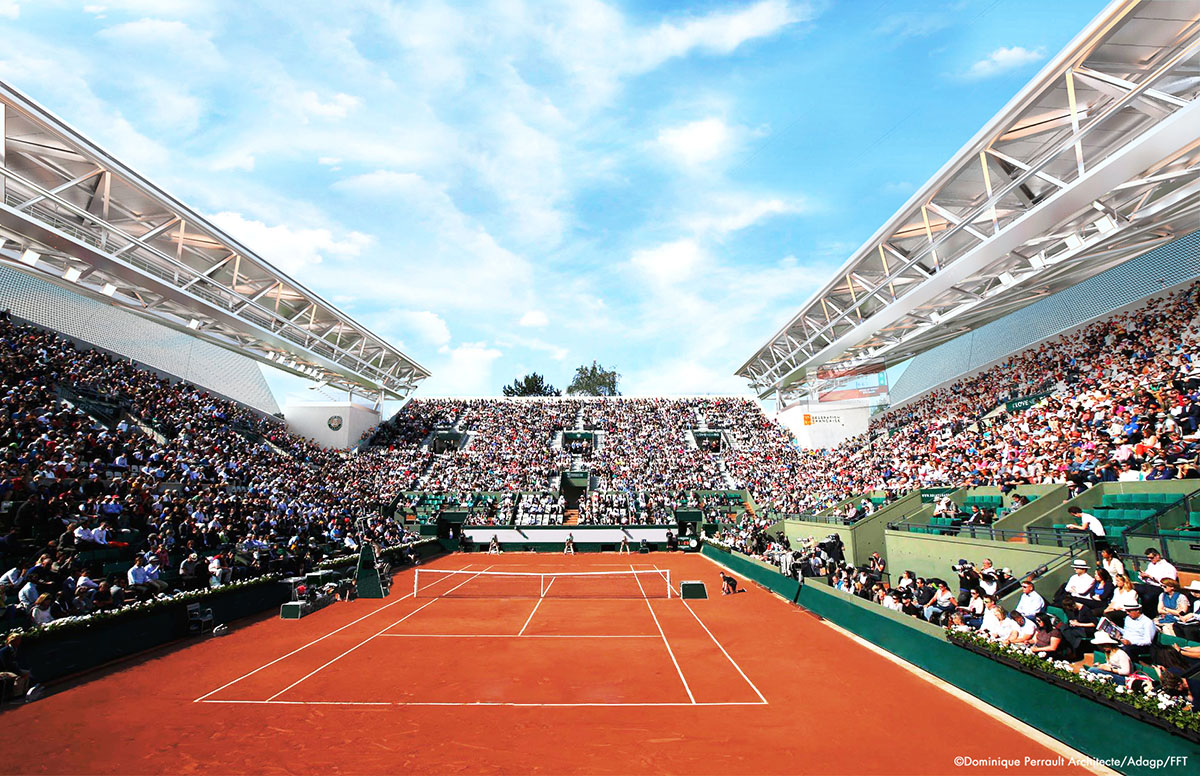 In haute couture, pleating refers to the art of folding a piece of fabric. for a fashion piece, this technique offers with style and elegance a great liberty of movement. the mobile cover of the Suzanne Lenglen court, thought as a pleated fabric, unfolds with delicacy and lightness in a solid frame.

The relationship between the rigid steel structure and the flexibility of the mobile canvas helps to shape the identity of the project, combining mechanical precision and design finesse. the mobile roof, like a membrane, is made up of a succession of 21 modules of stretched V-shaped canvas, continuously fixed between cables, for a total surface area of around 4,800 square meters. 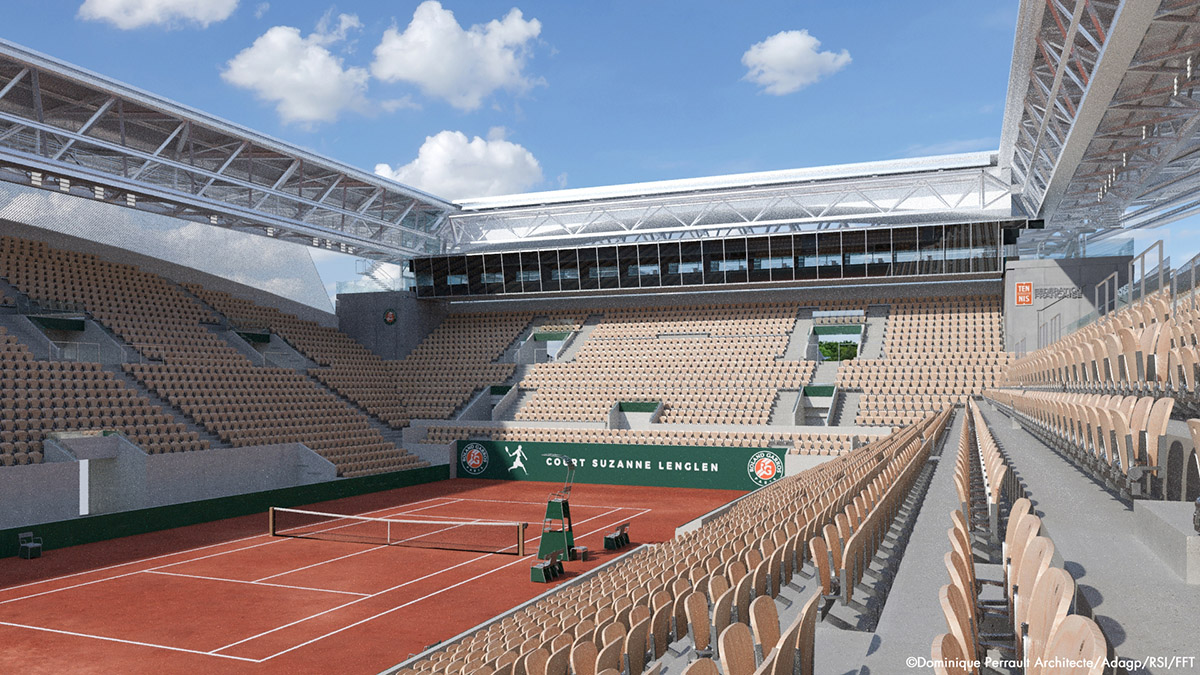 Each module is approximately 5 meters wide and 44 meters long. when the roof is deployed, the cables are tensioned to take up rain and wind loads.

A mobile girder on the north side of the mobile roofing is provided for its drive during the unfolding and folding operation. the movement is done horizontally, by deployment of the fold along rails, from south to north. As soon as the positioning of the cover is triggered, a show begins. 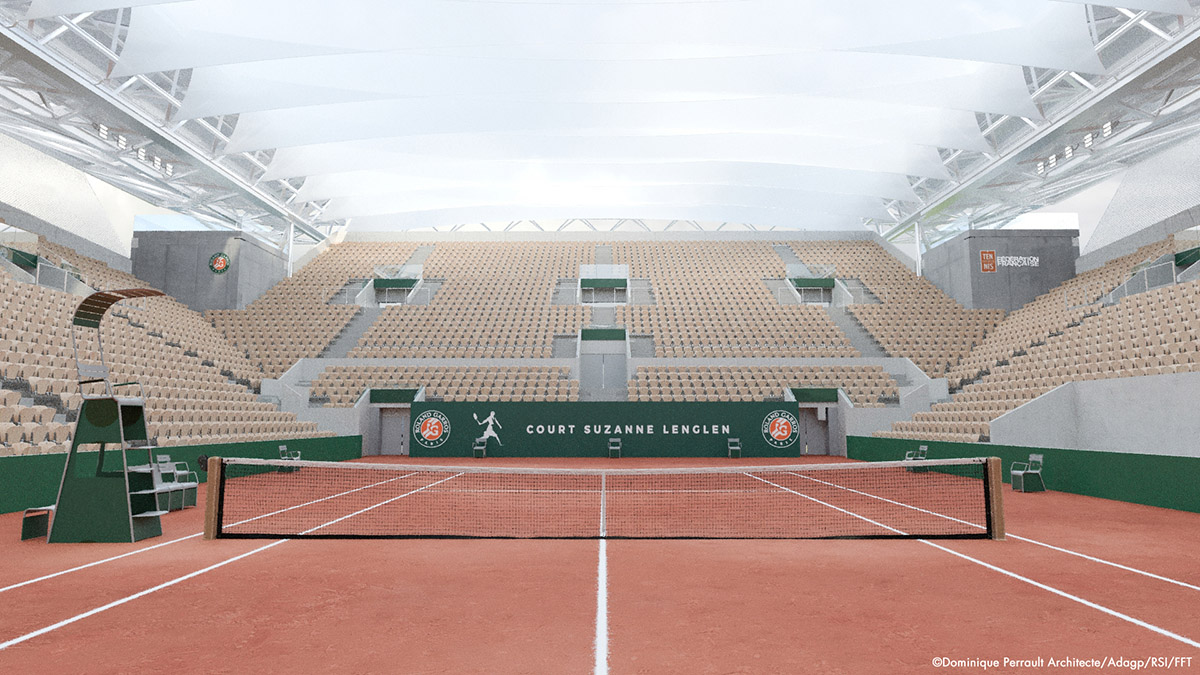 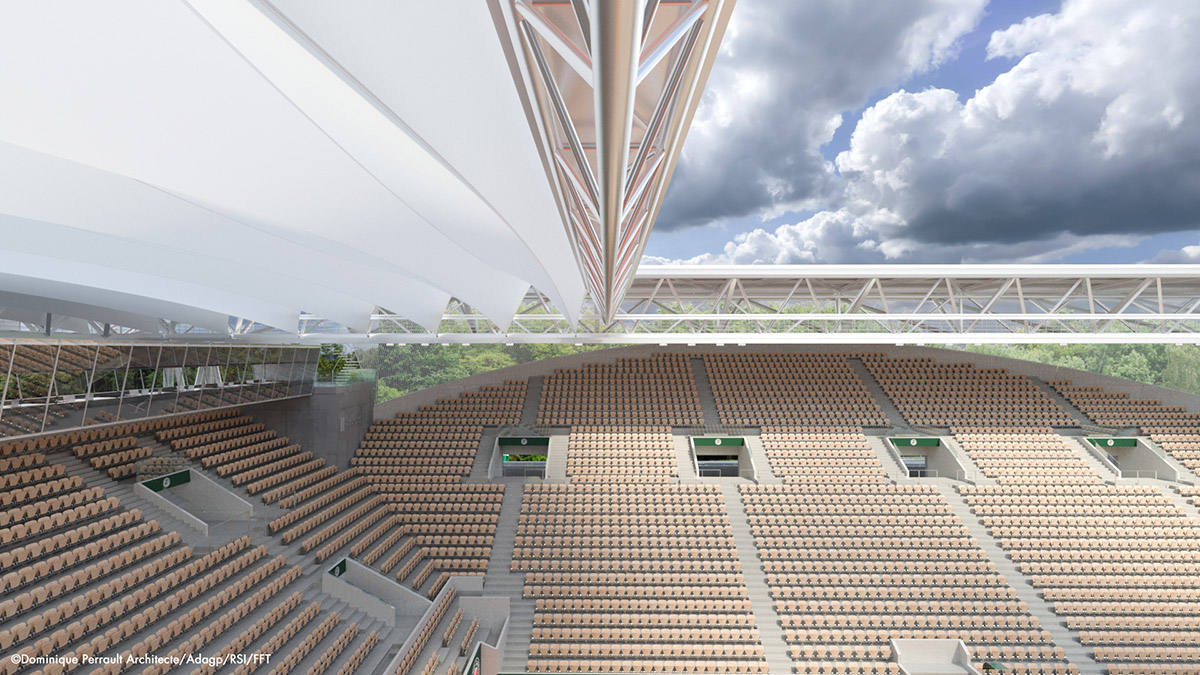 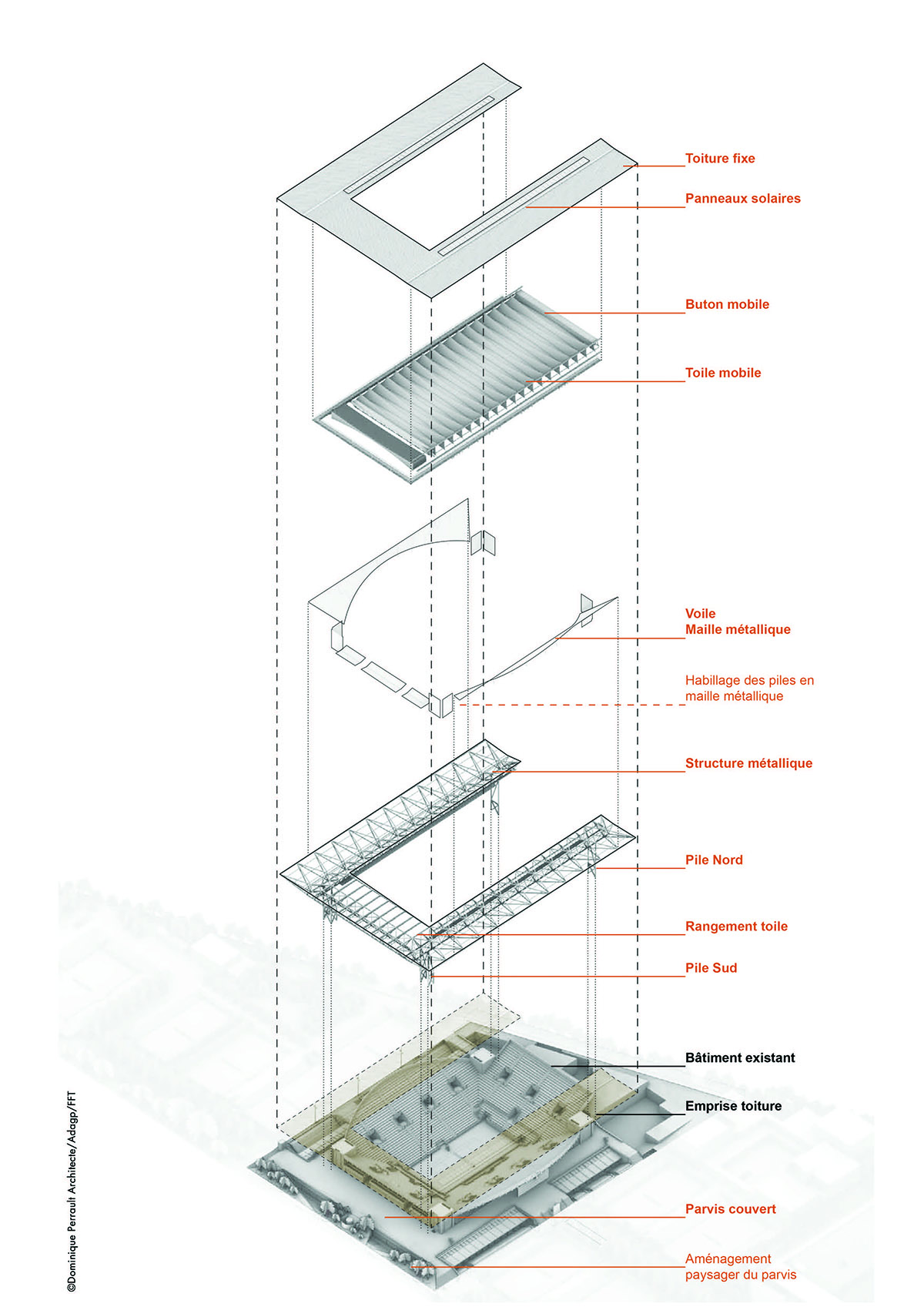 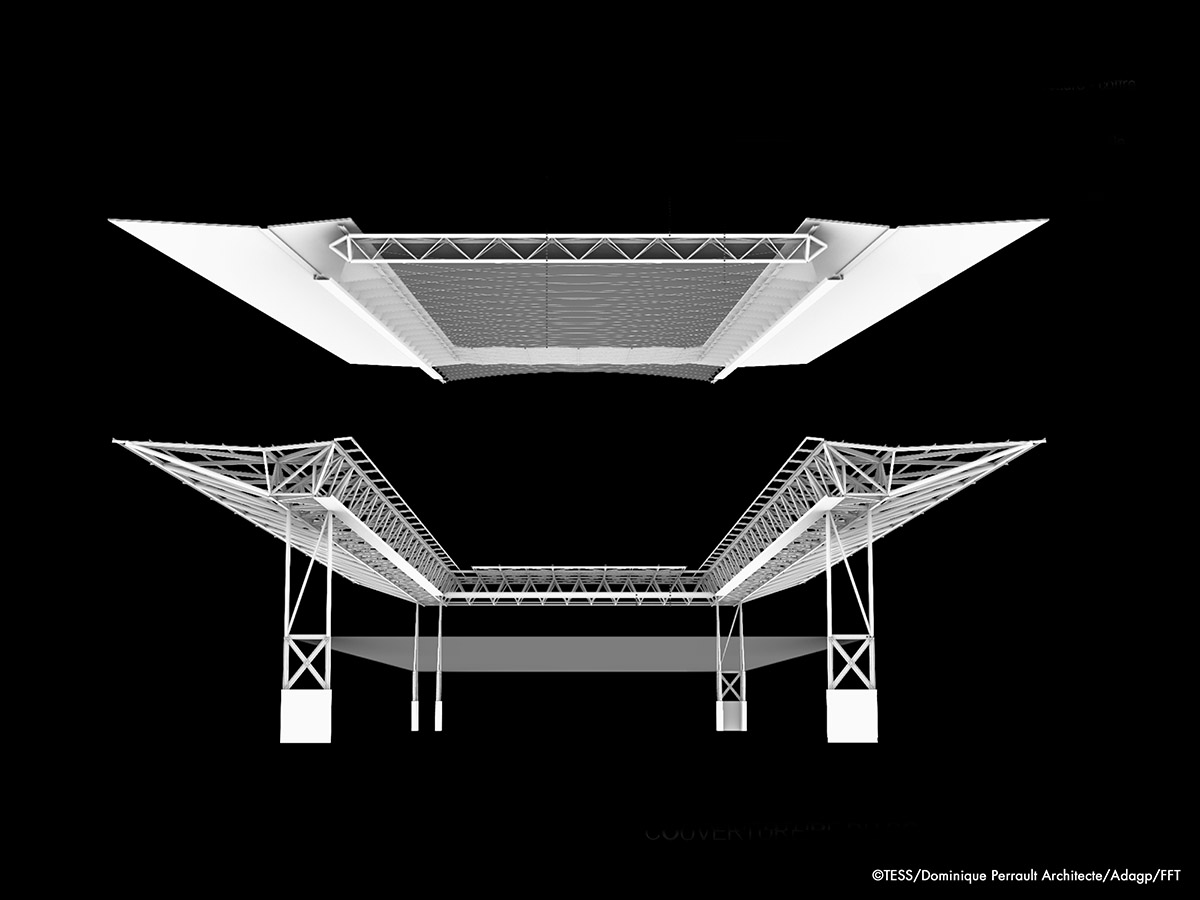 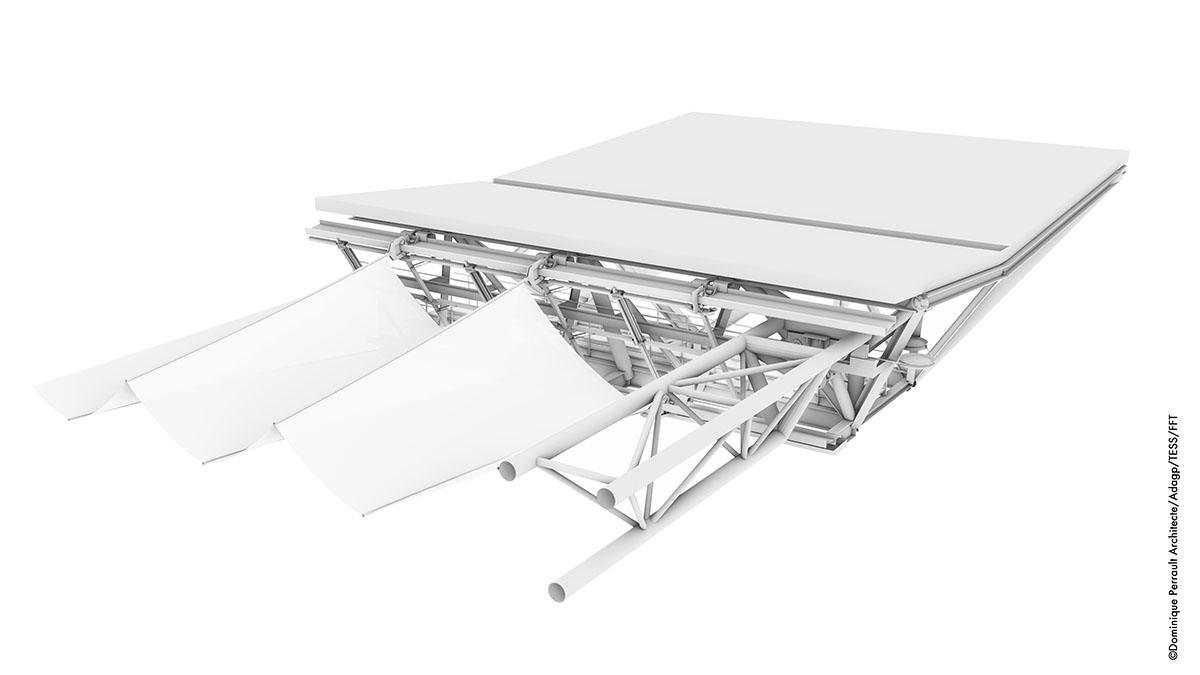 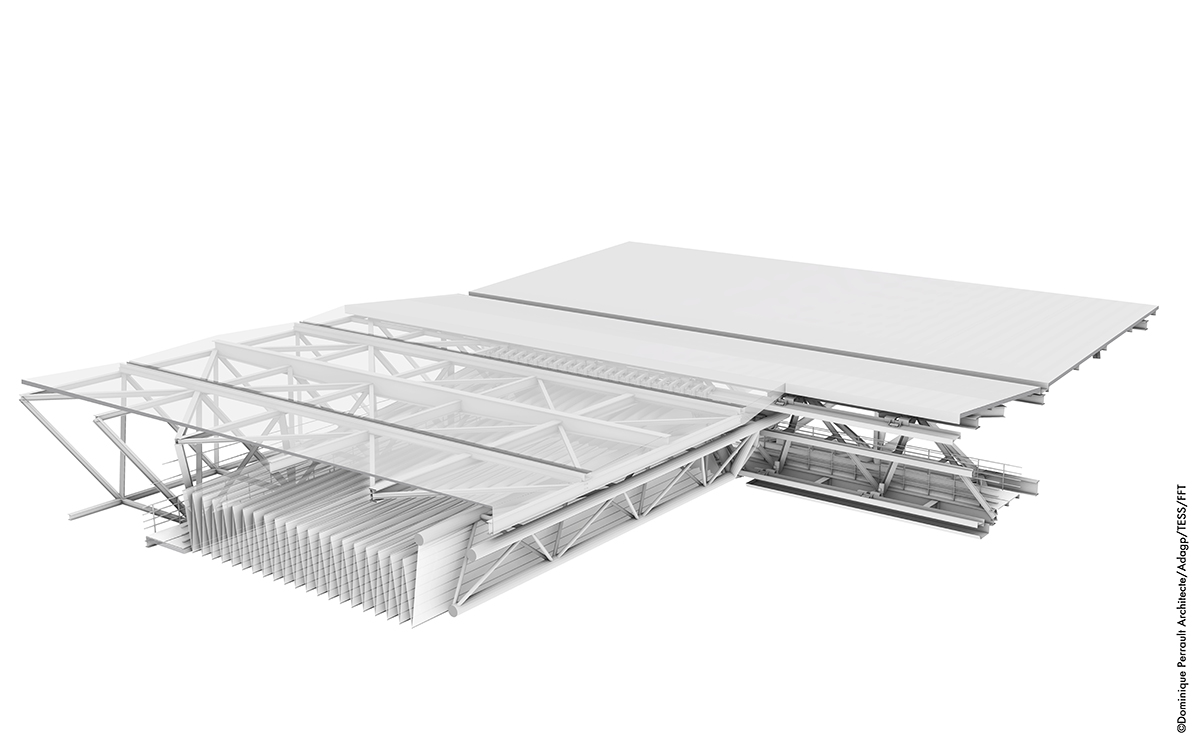