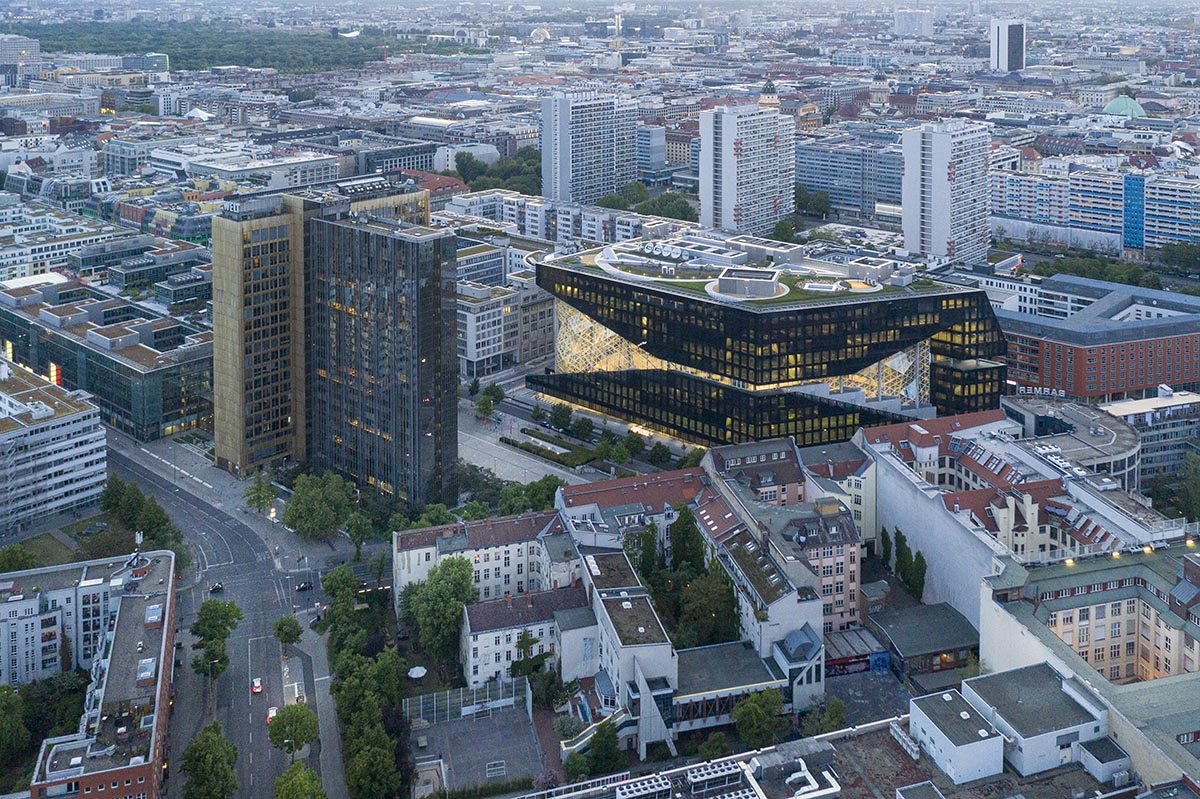 Exactly four years after the start of construction, the new cube-shaped building is the latest addition to the Axel-Springer Campus, the ensemble of different premises at the media and technology company's headquarters. Led by Rem Koolhaas and OMA Partner Chris Van Duijn, the building pushes the traditional boundaries of working space by bringing "people and their interaction" to the core of the building with a giant diagonal atrium that "opens up to the existing Springer buildings - a new centre of the Springer campus."

The building is located opposite the existing Axel Springer headquarters on Zimmerstrasse, a street which previously separated East and West Berlin, at one of the city's most significant locations.

"Paradoxically, the current pandemic and concurrent digital acceleration, demonstrate the need for spaces conceived for human beings to interact," said Rem Koolhaas, architect and founder of the Office for Metropolitan Architecture (OMA).

"In the typical office building, a visitor enters, and then disappears. It is far from clear what happens inside. In the new Axel Springer building, people and their interaction, are the essence."

"The Springer building is a tool for the further development of a company in perpetual motion. It offers its users a physical base – a wide variety of spatial conditions, intimate to monumental – in contrast to the flatness of working in virtual space," added Koolhaas. The new Axel Springer building offers 52,000 square meters of work space for more than 3,000 employees and is characterized by its open, transparent architecture.

Straddling the former border, the 45-meter high, light-flooded atrium divides the building into sections in a perpetual encounter with each other across the space.

In the space between, the terraced ten stories and 13 bridges create connections between the sections and provide inspiration for physical encounters in the digital age. 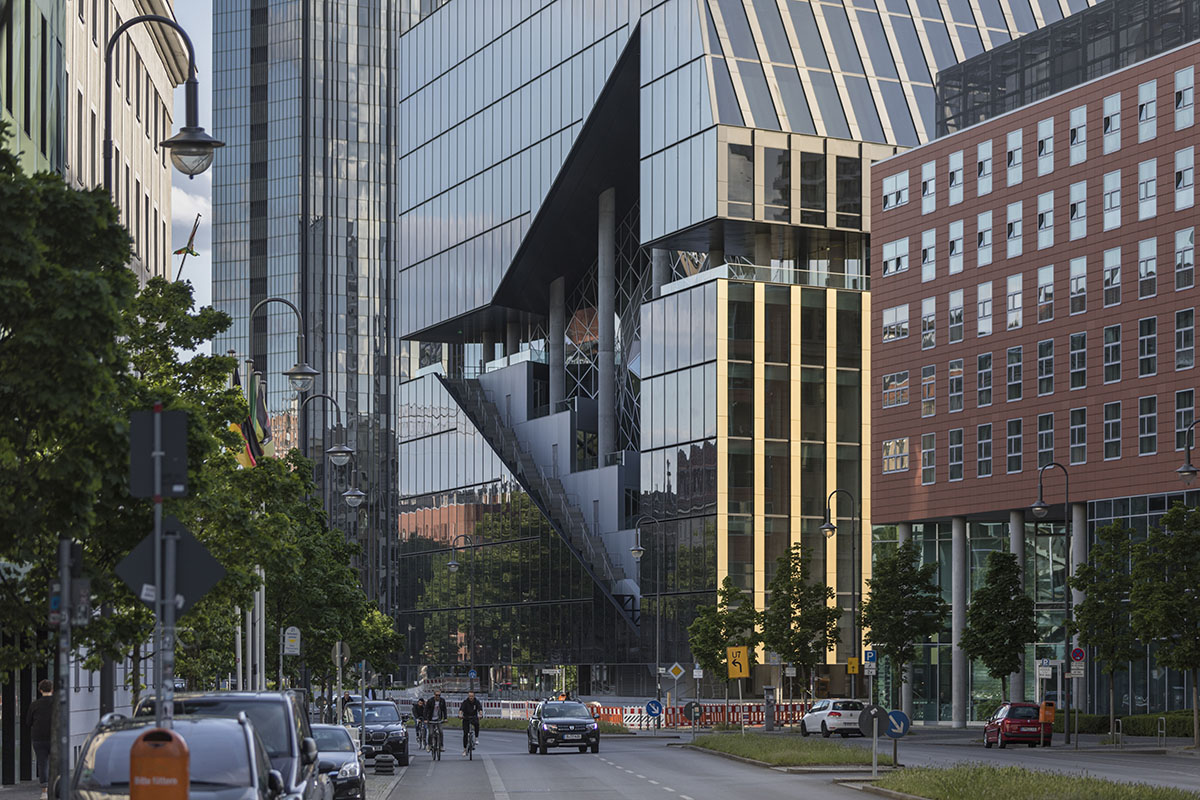 "We wanted the new building to be a symbol and an accelerator of our own transformation. Long before the coronavirus, the mission was to find a new answer to the question of why office space is still needed at all in the digital age," said Mathias Döpfner, CEO of Axel Springer SE."

"Rem Koolhaas has provided a spectacular reply. Open, multifunction spaces that enable maximum flexibility of use. Avant-garde architecture as a magnet for encounters and communication. The building as a powerhouse of creativity," Döpfner added. 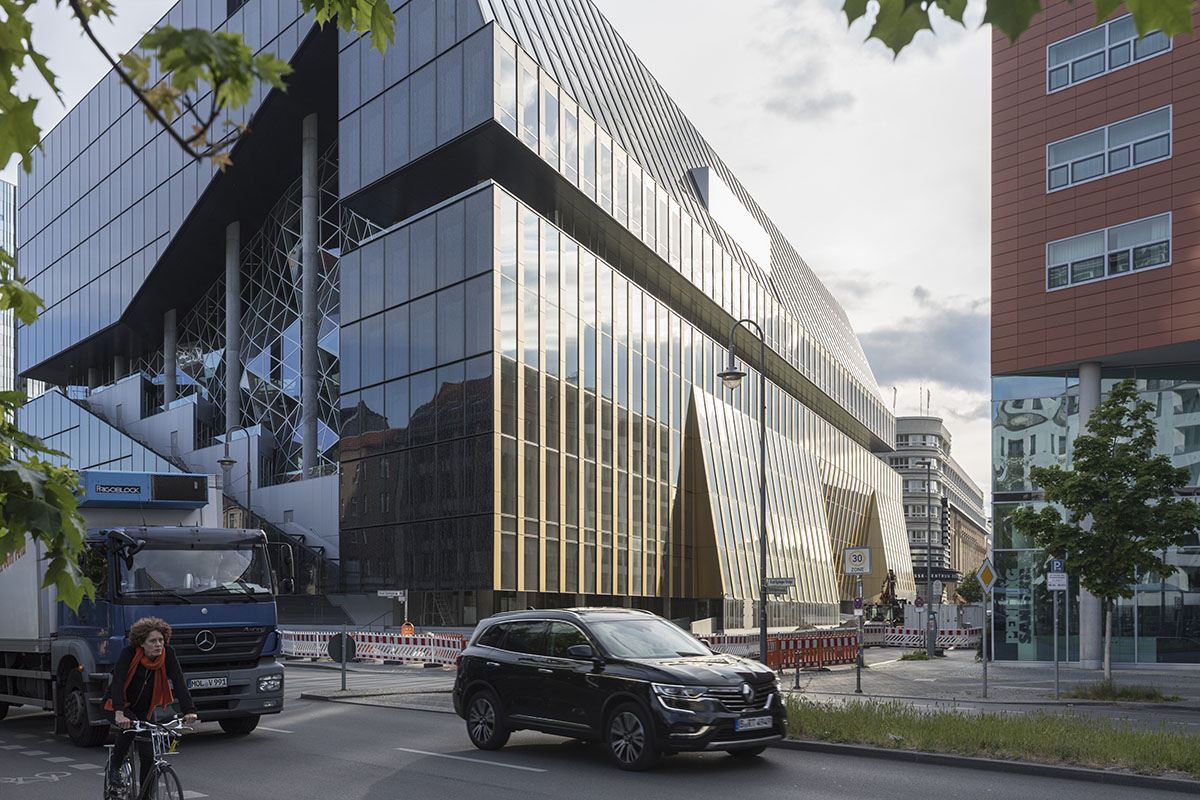 "Axel Springer signed a bond for the future with the development of its publishing house. It paid off, thirty years ago when our country was reunited, just as it does today. But it seems to me that this new house, too, does not only interpret the times in which we live," said said Frank-Walter Steinmeier, President of the Federal Republic of Germany.

"It wants to stand for the future. This house also wants to be a symbol. A symbol of the radical transformation of a publishing house into a media company, a response to the demands and challenges of digitization," added Steinmeier. 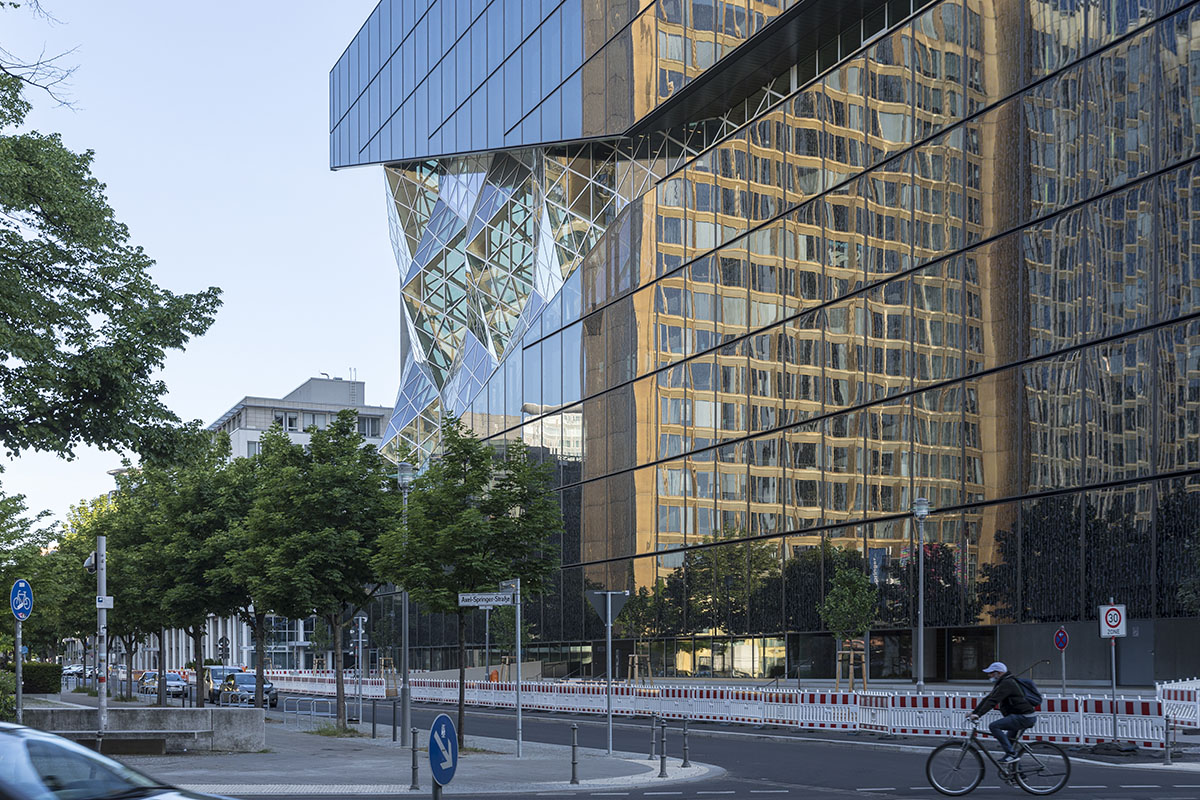 "Axel Springer has launched a move from print to digital media. Its new building on the campus in Berlin acts both as a symbol and a tool in this transition - a building to lure the elite of (Germany’s) digital Bohemia," said OMA in it project description.

"Bisected by a diagonal atrium that opens up to the existing Axel Springer buildings, the essence of the design is a series of terraced floors that together form a ‘valley’ that creates an informal stage at the centre - a place to broadcast ideas to other parts of the company."

"The genius of print is that it is a cheap, physical, hyper-accessible embodiment of a complex collective effort, for which so far the digital has been unable to find an equivalent. Architectural offices are similar to newspapers in that they produce complex assemblies and selections from radically different sources of information," the firm added. 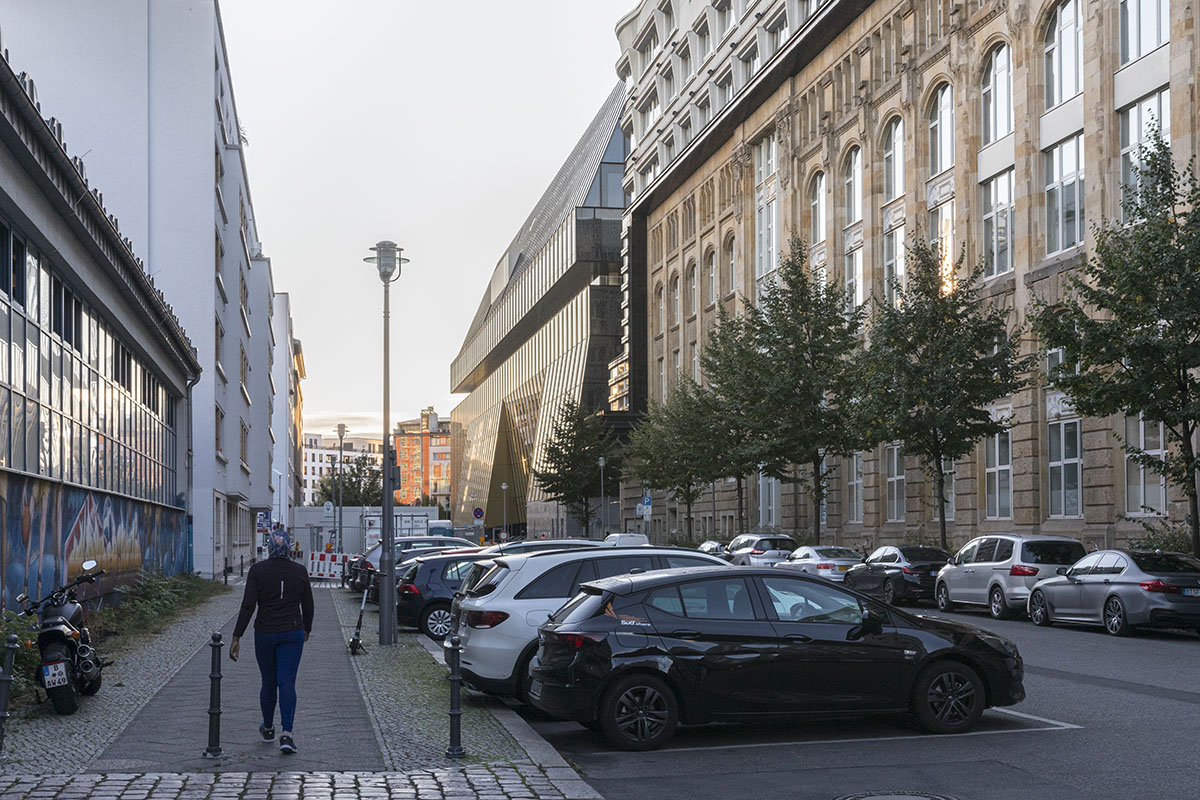 "As architects, we have experienced the advantages: speed, precision, smoothness. But we have also suffered one crucial consequence: the relationship between the worker and his computer, which isolates him in a bubble of introverted performance, inaccessible to collective overview."

As OMA highlights, "the classical newsrooms are dominated by smoking, typing journalists, each inhabitant was aware of the labour and progress of his colleagues and of the collective aim: a single issue, with the deadline as a simultaneous release."

"In the digital office, staring intently at a screen dampens all other forms of attention and therefore undermines the collective intelligence necessary for true innovation." 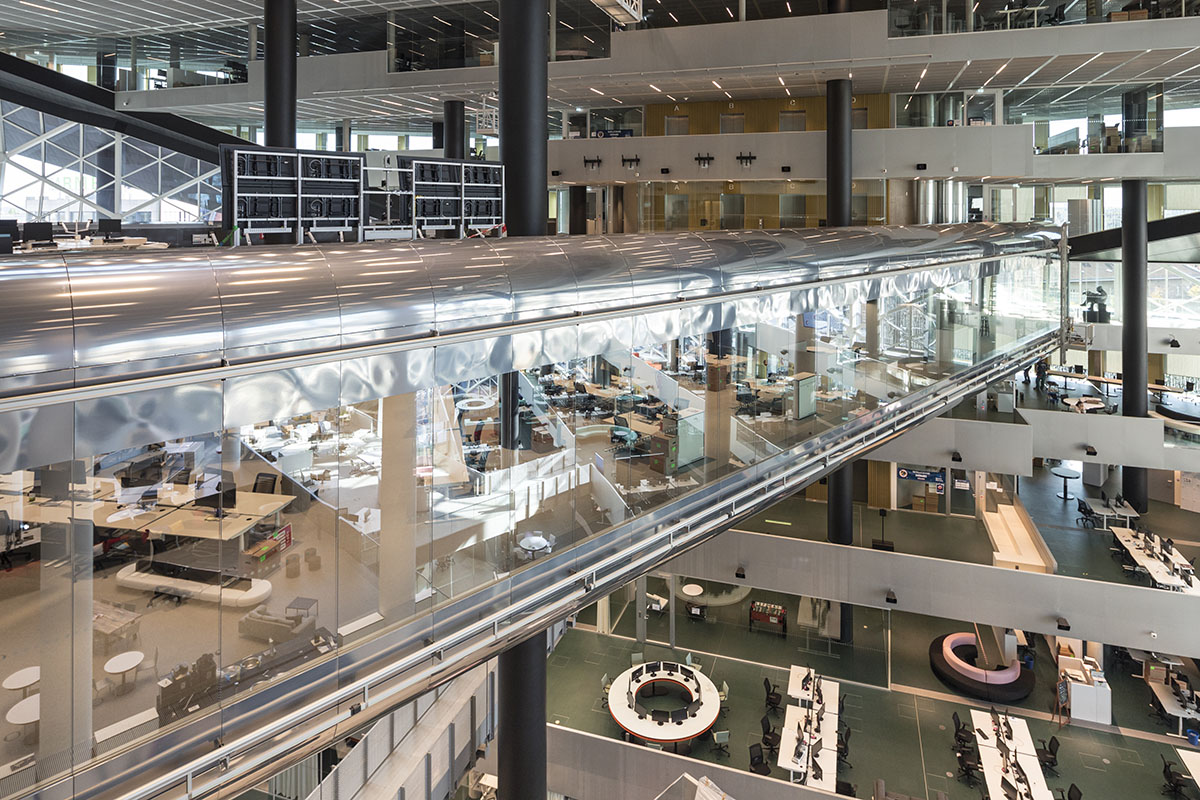 OMA designed a series of terraced floors that together form a digital valley. Each floor also offers a covered part as a traditional work environment, which is then uncovered on the terraces. Halfway through the building, the valley is mirrored to generate a three dimensional canopy. 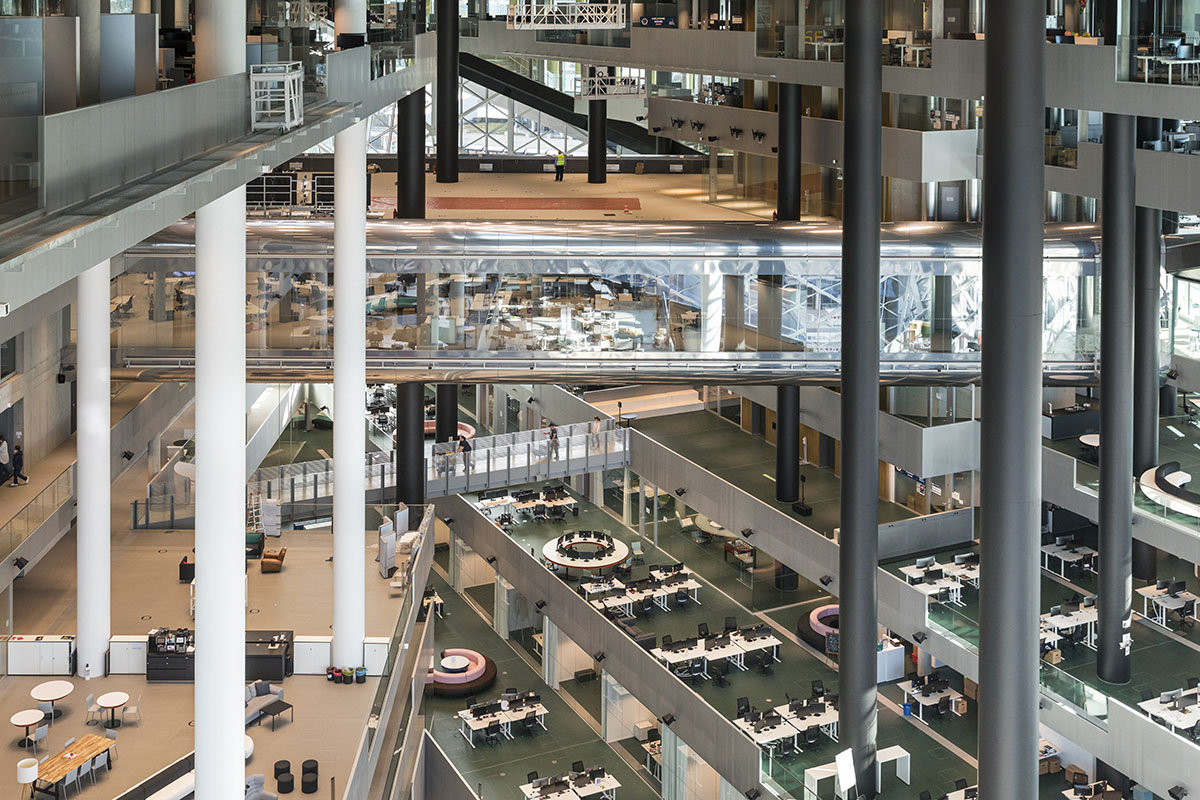 "The common space formed by the interconnected terraces offers an alternative to the formal office space in the solid part of the building, allowing for an unprecedented expansion of the vocabulary of workspaces: a building that can absorb all the question marks of the digital future," as the firm explains. 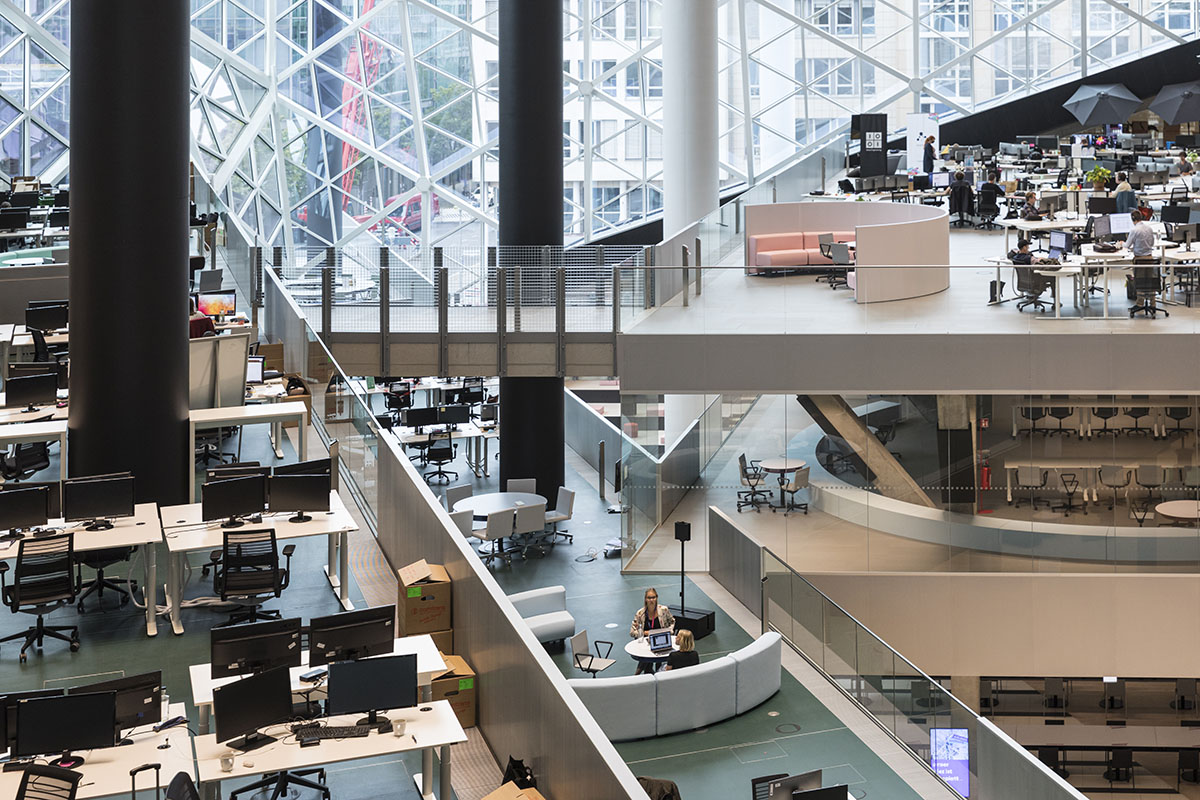 The studio designed public spaces on three levels - ground floor lobby, meeting bridge, and roof-top bar. In the interior, there is a meeting bridge which is also a viewing platform from which the visitors can witness the daily functioning of the company and how it evolves.

On the ground level, the building contains studios, event and exhibition spaces, canteens and restaurants.

In a recent OMA press statement, the firm said: the new occupants have now almost all moved in and the first units have been working there since early 2020. 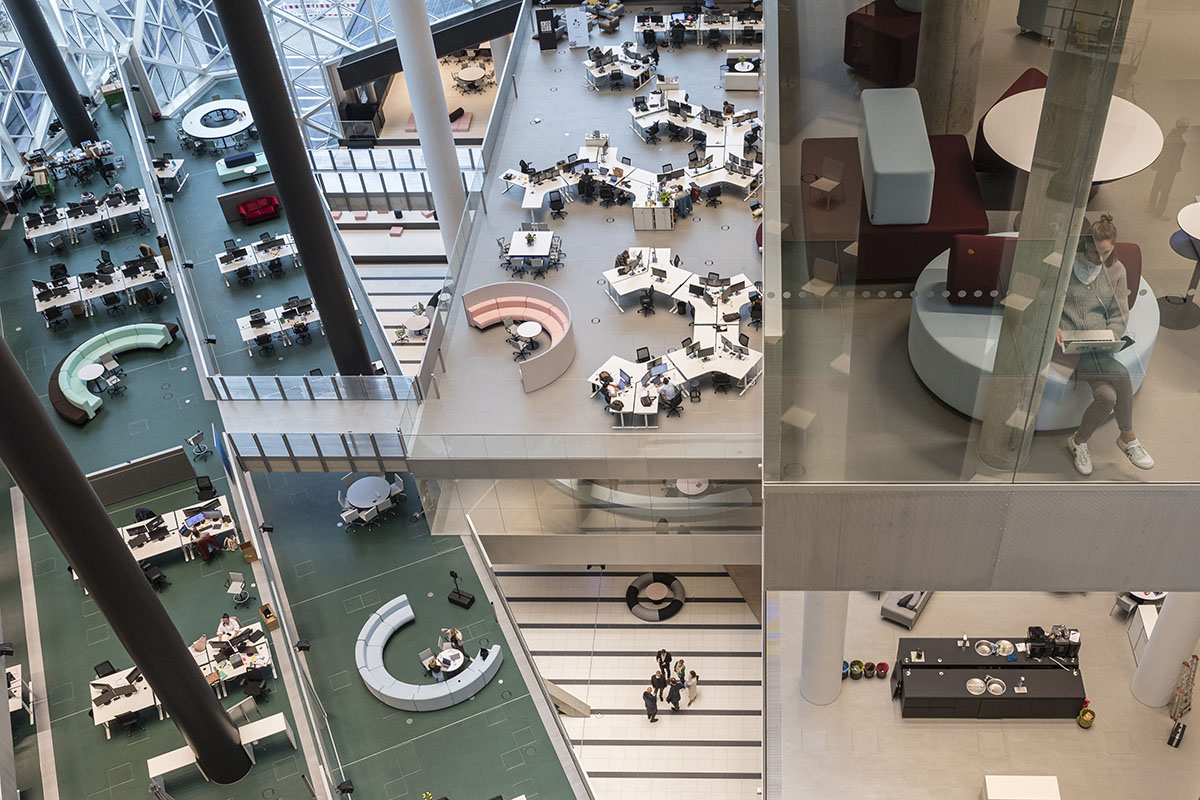 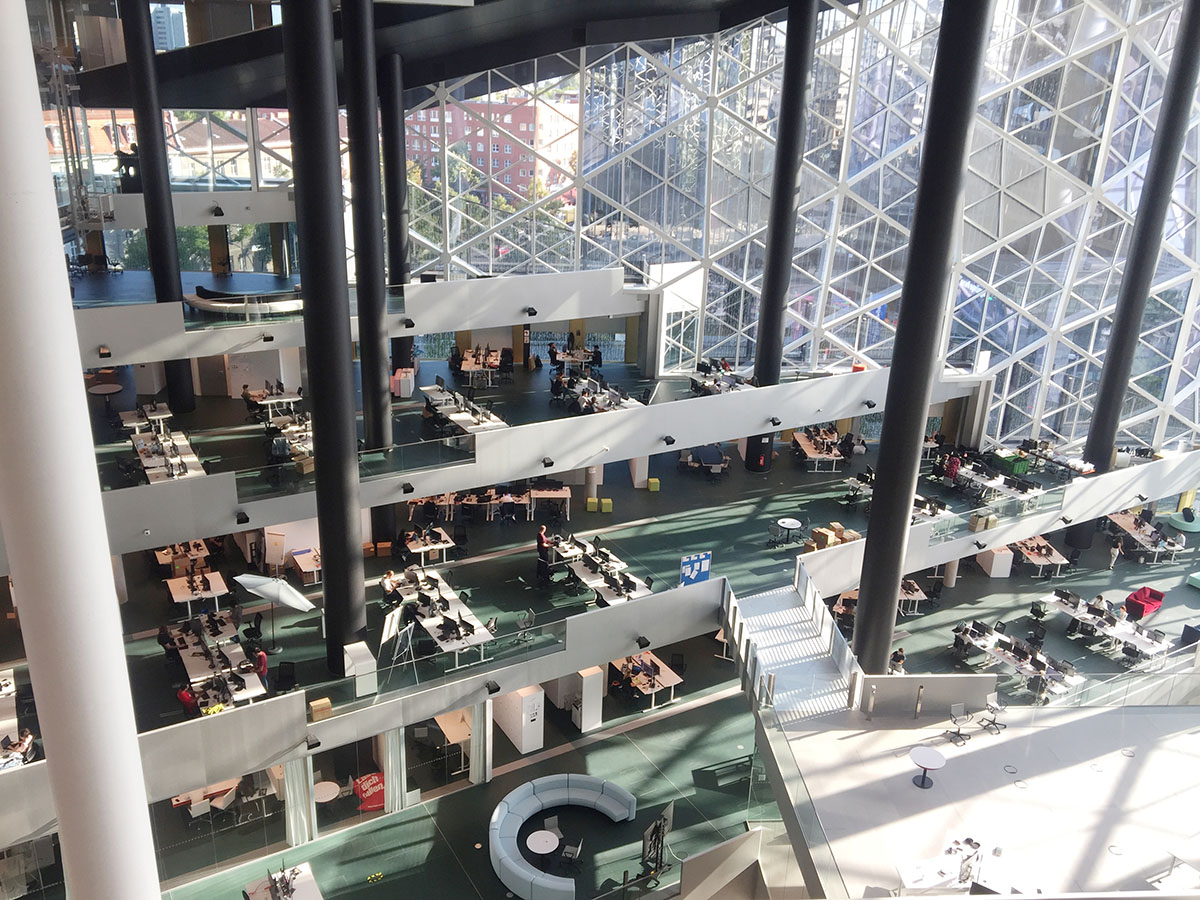 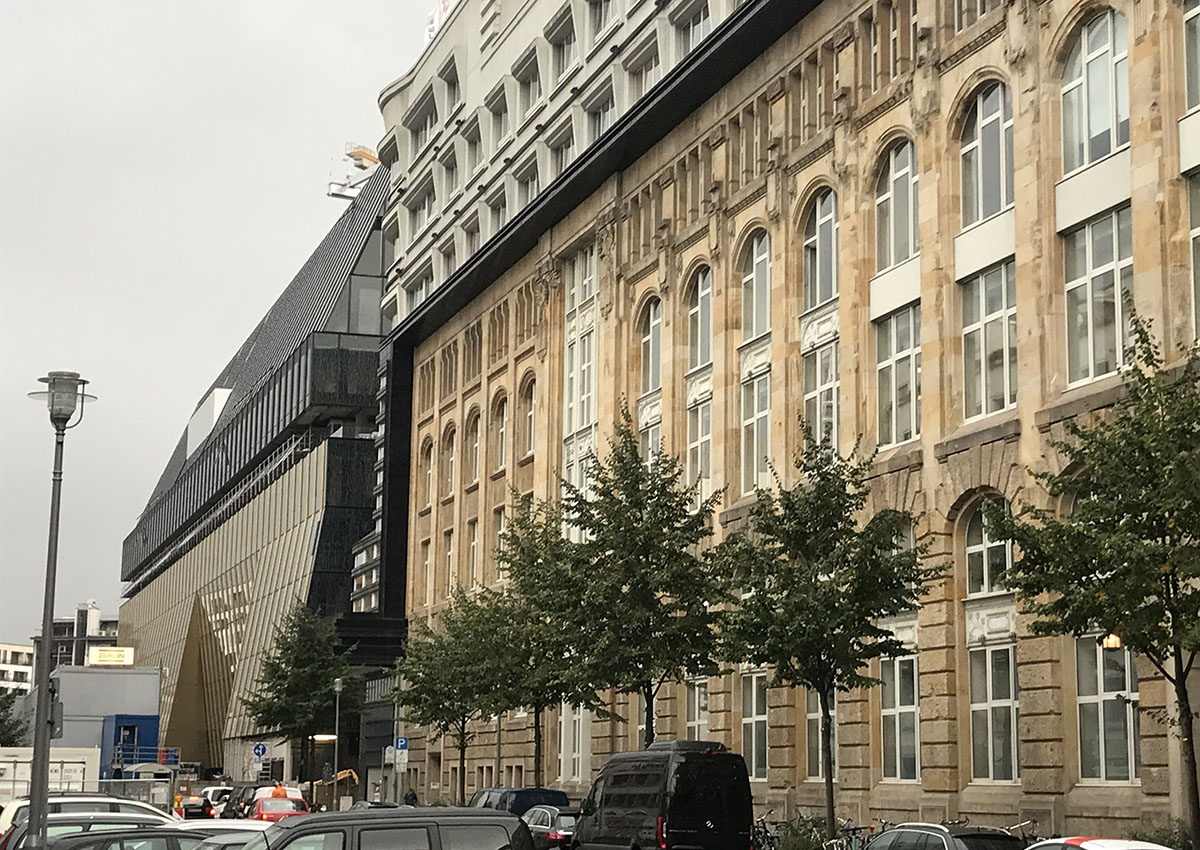 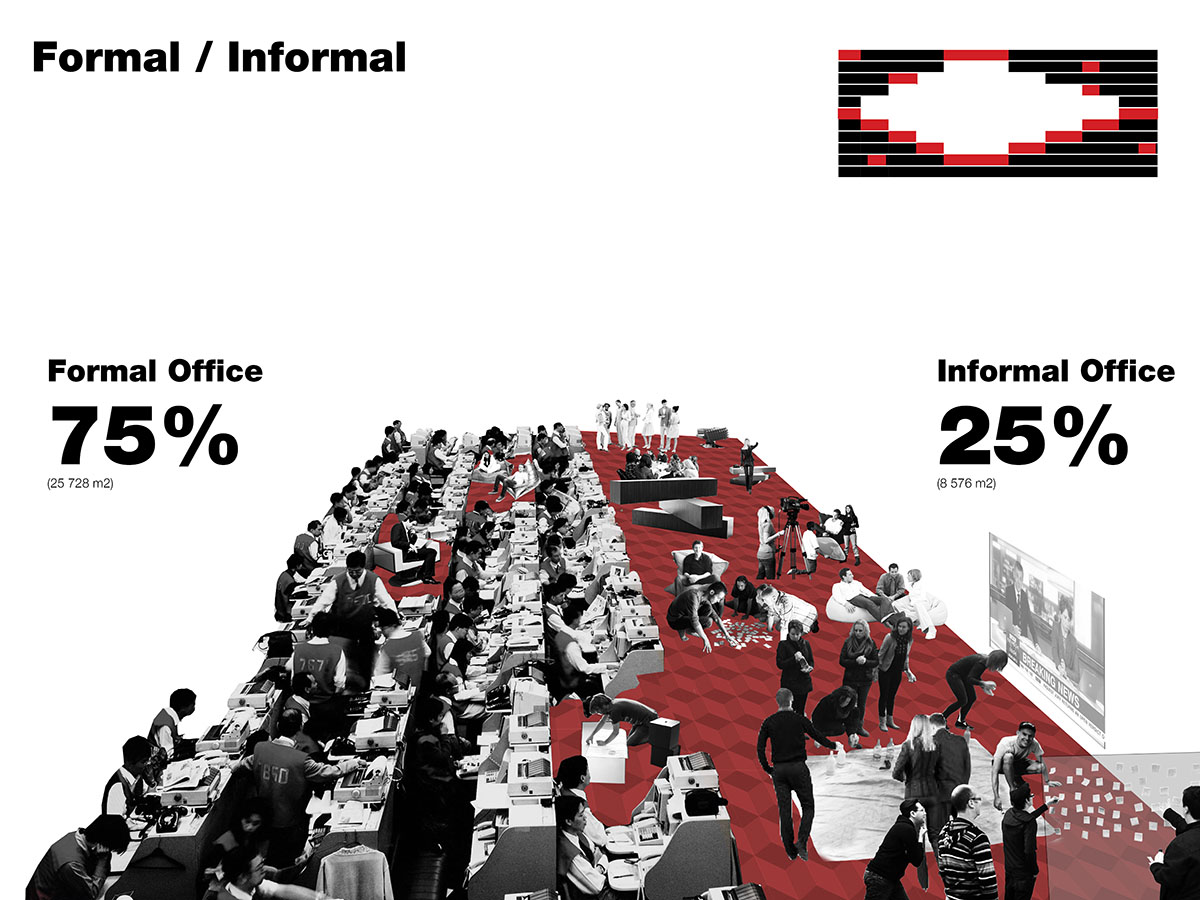 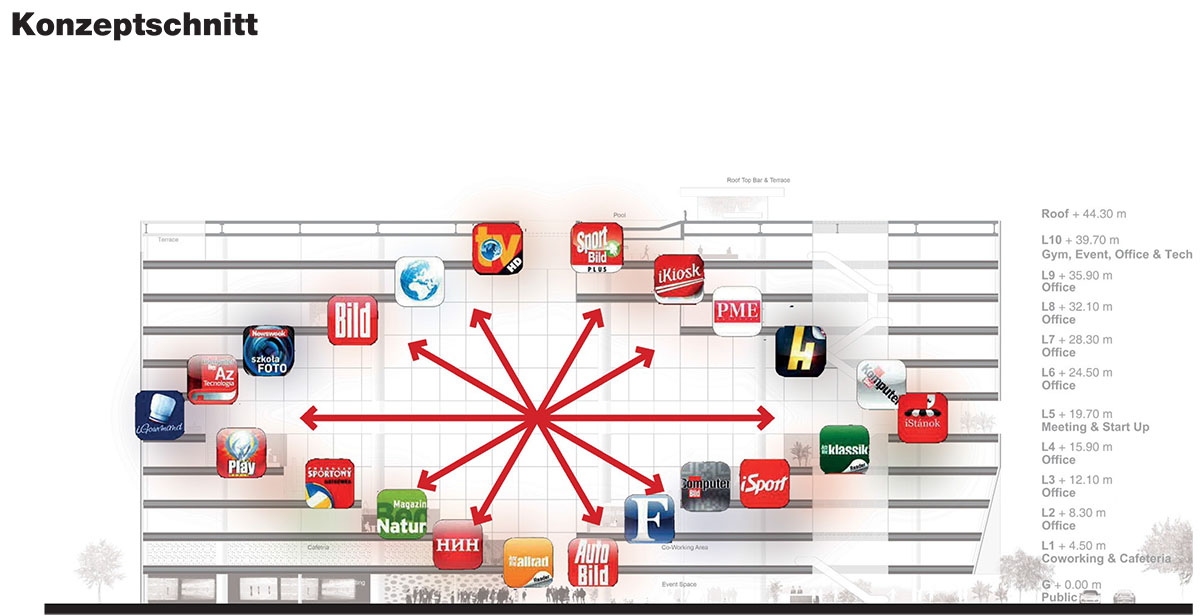 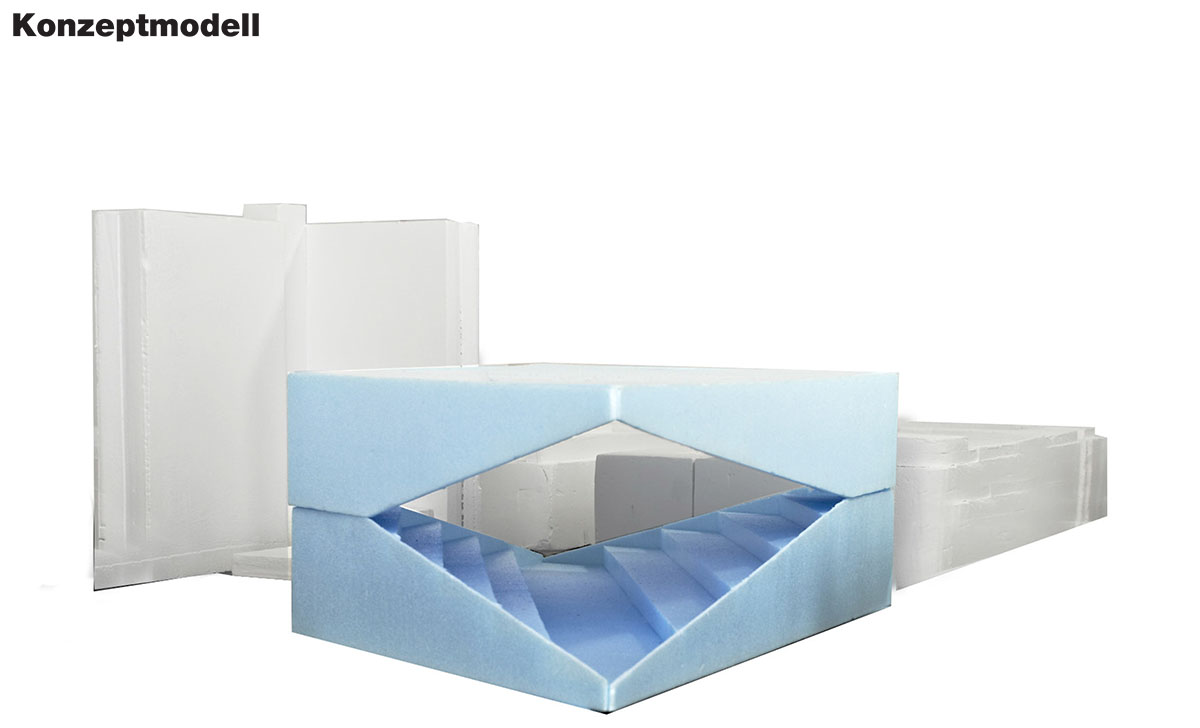 The tenants include the shopping and comparison platform idealo, the editorial offices of WELT Print and WELT Digital, WELT TV, Media Impact and various central departments of Axel Springer.

In spite of restrictions due to the coronavirus pandemic, the building was completed on time and on budget.

Curtain design: Inside Outside