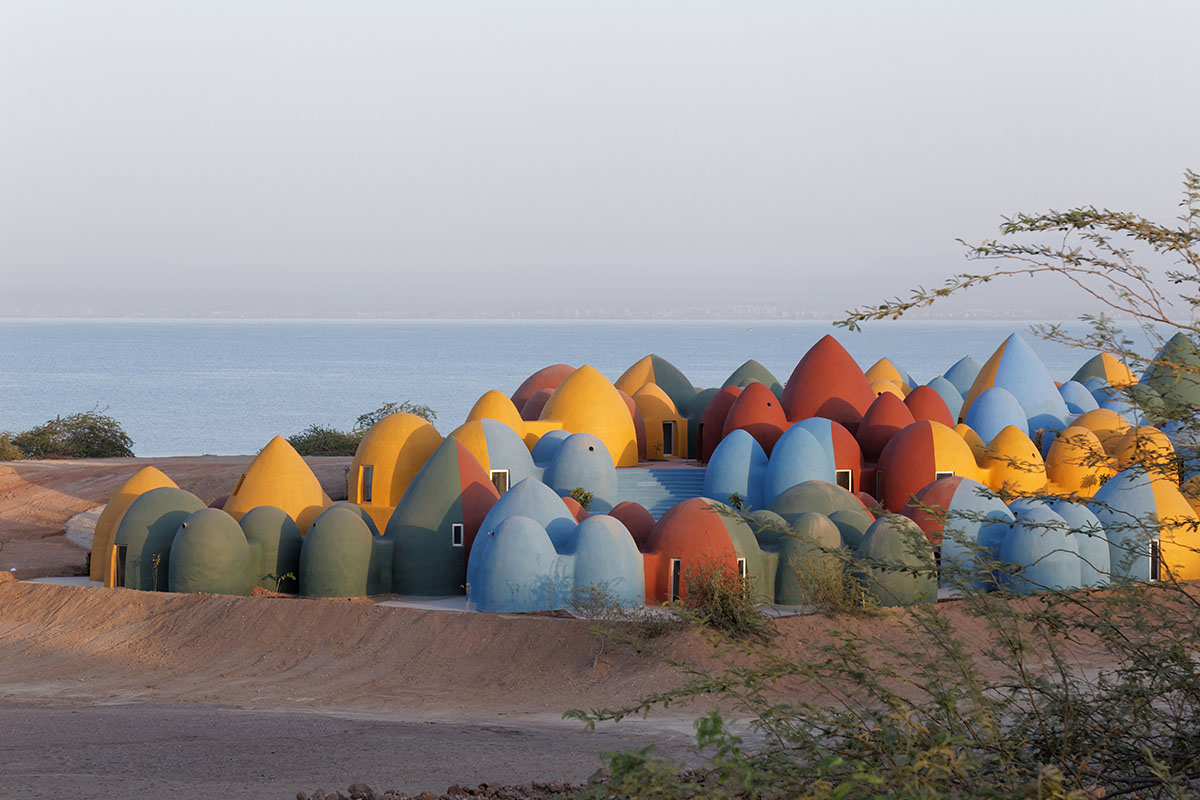 Tehran-based architecture studio ZAV Architects has built a colorful-domed housing made of rammed earth and sand on Hormuz island of Iran.

Named Presence in Hormuz 2, the 10,300-square-metre housing contains 200 domed housing units in various scales that are scattered at site in groups and create a fifth facade from the top.

The new development, realized as a series of urban developments commissioned by a semi-public institution in the area, was completed in order to empower the local community of the island.

Presence in Hormuz 2 is the first phase of the project, the second phase is a multipurpose cultural residence called Majara residence (meaning adventure) that ties together the lives of local people and visitors both culturally and economically.

The new housing is located in Hormuz, a formerly glorious historic port in the strategic strait of Hormuz in the Persian Gulf, South of Iran, that controls the shipment of petroleum from the Middle East. 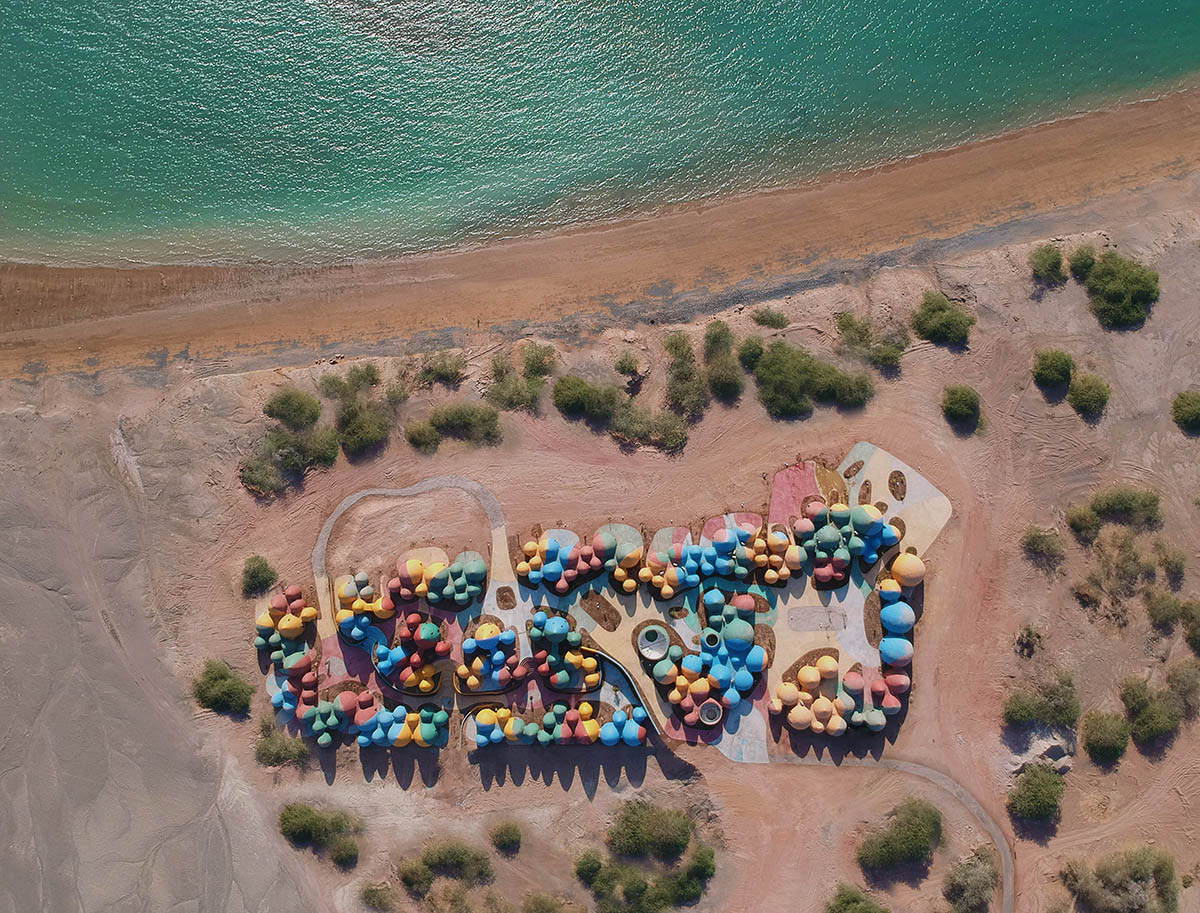 "Oddly, the local inhabitants of the beautiful, touristic and politically strategic island struggle economically, getting involved in illegal trafficking activities using their boats."

"In a country where the state struggles with political disputes outside its borders, every architectural project becomes a proposal for internal governing alternatives, asking basic questions: what are the limits of architecture and how can it suggest a political alternative for communal life? How can it attain social agency?," asked the firm. 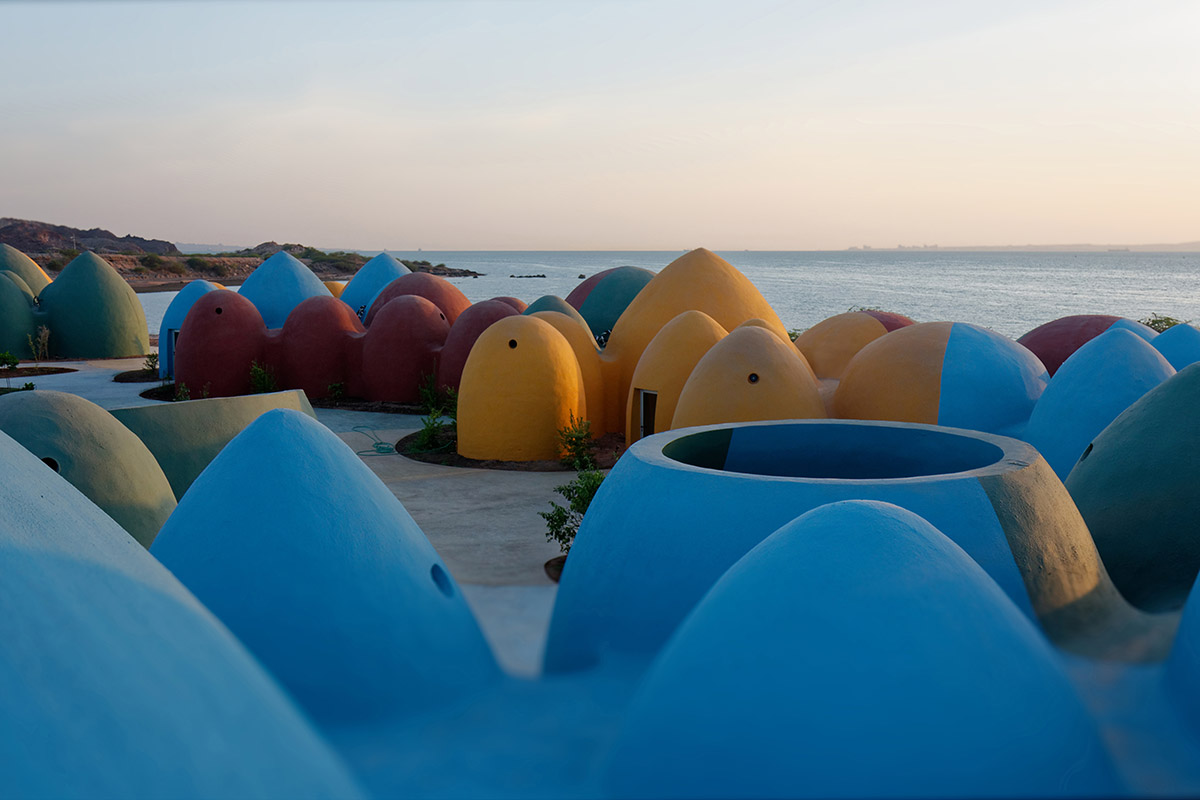 “Charta” a semi-open space in the south of the site, for a gradual transition from closed to open spaces. Image © Payman Barkhordari

Designed as a continuous, colorful domed structures, the project is inspired from granule structures of the land and are used to create a macro-level architecture.

Derived from the site's inputs, the architects used sand particles and filled in the bags that shape the domes, which are the spatial particles that make up the entire building. 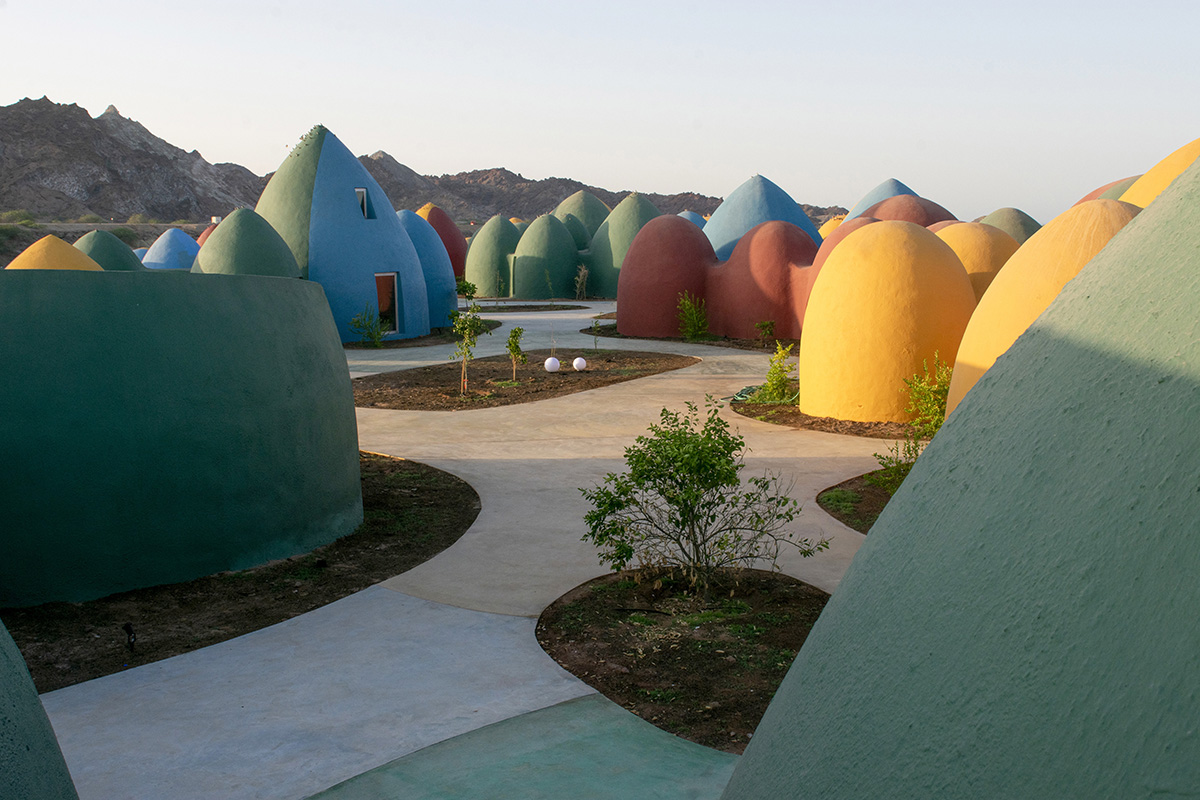 As the architects highlight, Presence in Hormuz is a continuous process aiming at building trust rather than architectural objects, in order to encourage the participation of local people and the inclusion of their interests in any intervention in the island.

The studio used rammed earth and sand in the bags to construct the domes, this technique, known "Superadobe" invented by Iranian-born architect Nader Khalili, is a simple and innovative technique used in the region. 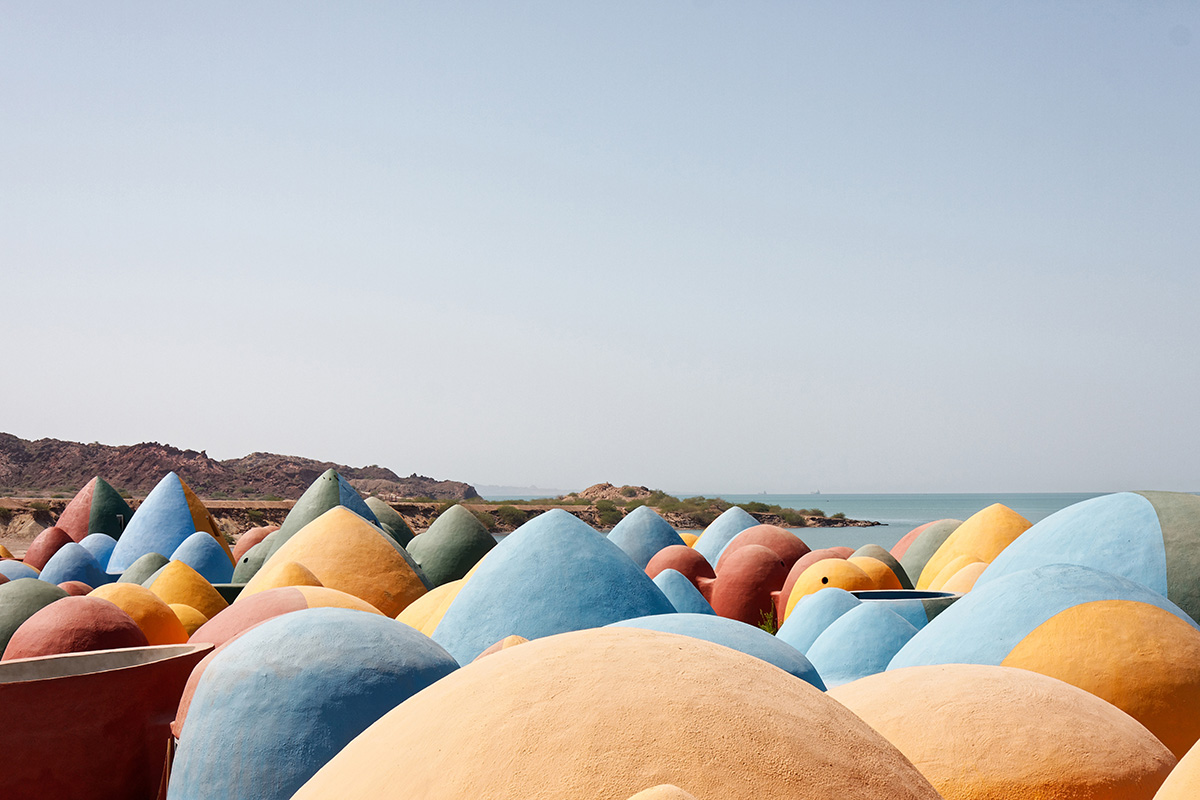 View from the south-west, above the walkable rooftops. Image © Payman Barkhordari

"Their small scale makes them compatible with the building capabilities of local craftsmen and unskilled workers, which have been prepared for this project with previous smaller projects," added the architects.

"Today they are trained master superadobe masons, as if Nader Khalili multiplied exponentially." 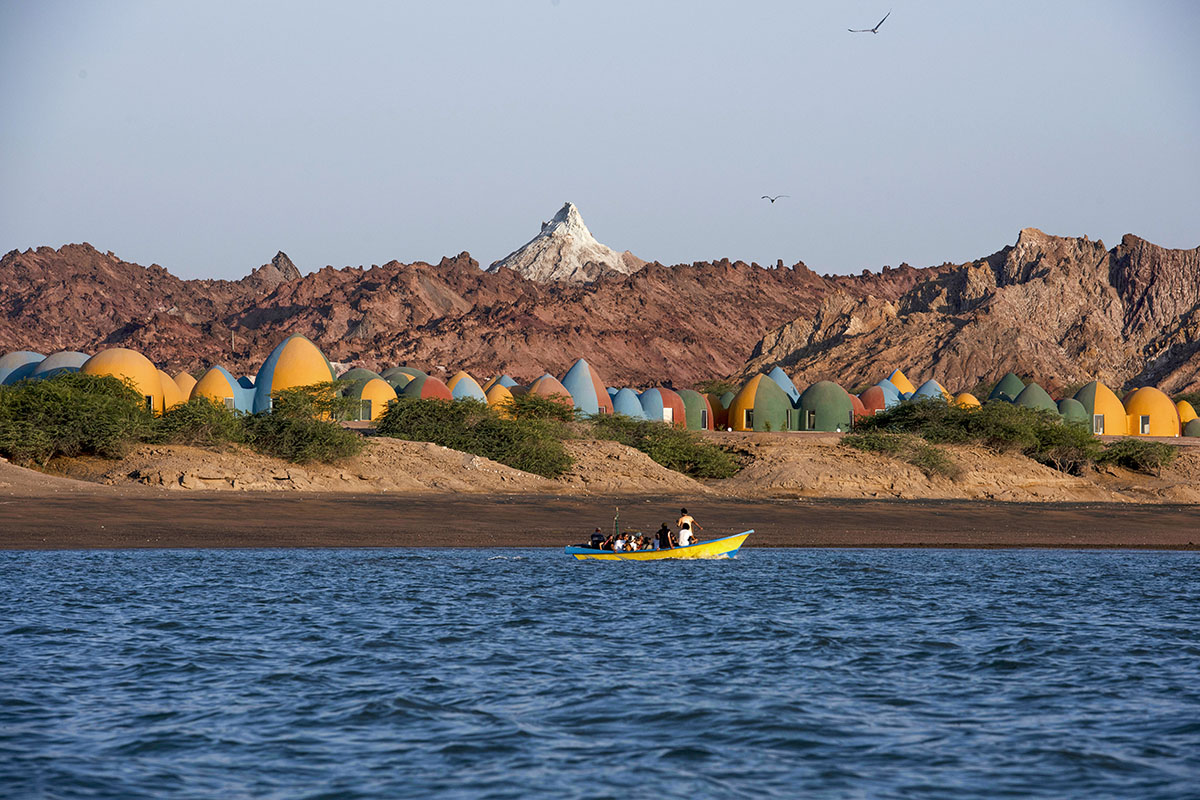 View from the north-west toward the residence. Image © Tahmineh Monzavi

The architects described it as "swelling earth"

"The infinite number of colorful particles, be they soil, sand, gravel or stone, pile up and form the rainbow topography of Hormuz island."

"In this project a carpet is woven with granular knots inspired by the particles that make up the ecotone of the island," added the studio.

The sandbags that create the spatial particles (aka domes) are filled with the dredging sand of the Hormuz dock, as if the earth has swollen to produce space for accommodation. 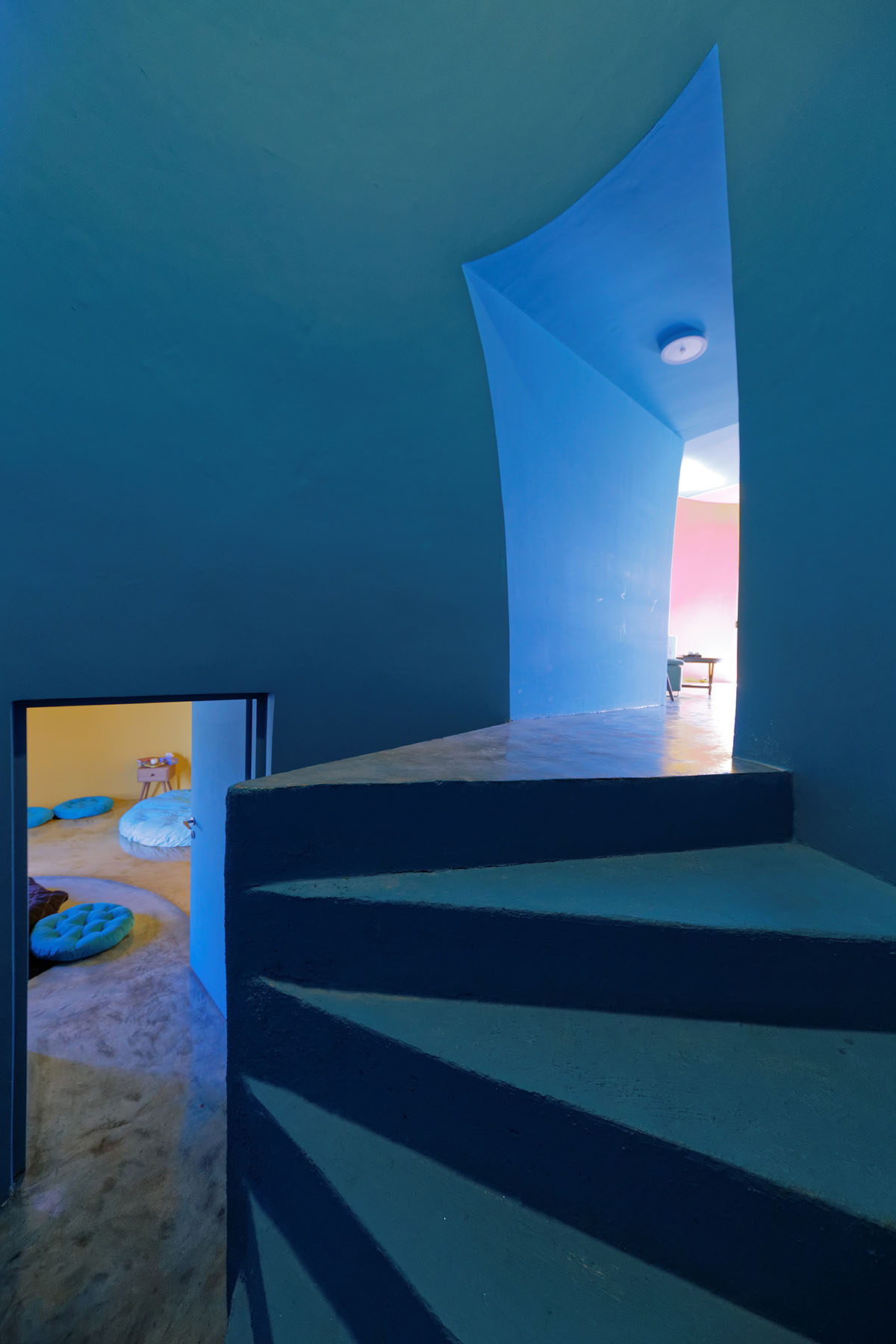 "Architecture has the capacity be a mediator in the middle ground that converges the interests of different groups, from the state and investors to various classes and groups of people."

"Majara does so in bringing together the owners of land from the neighboring port of Bandar Abbas who organize an annual landart event in Hormuz, the investors from the capital city Tehran, and the local people of Hormuz as partners in the project." 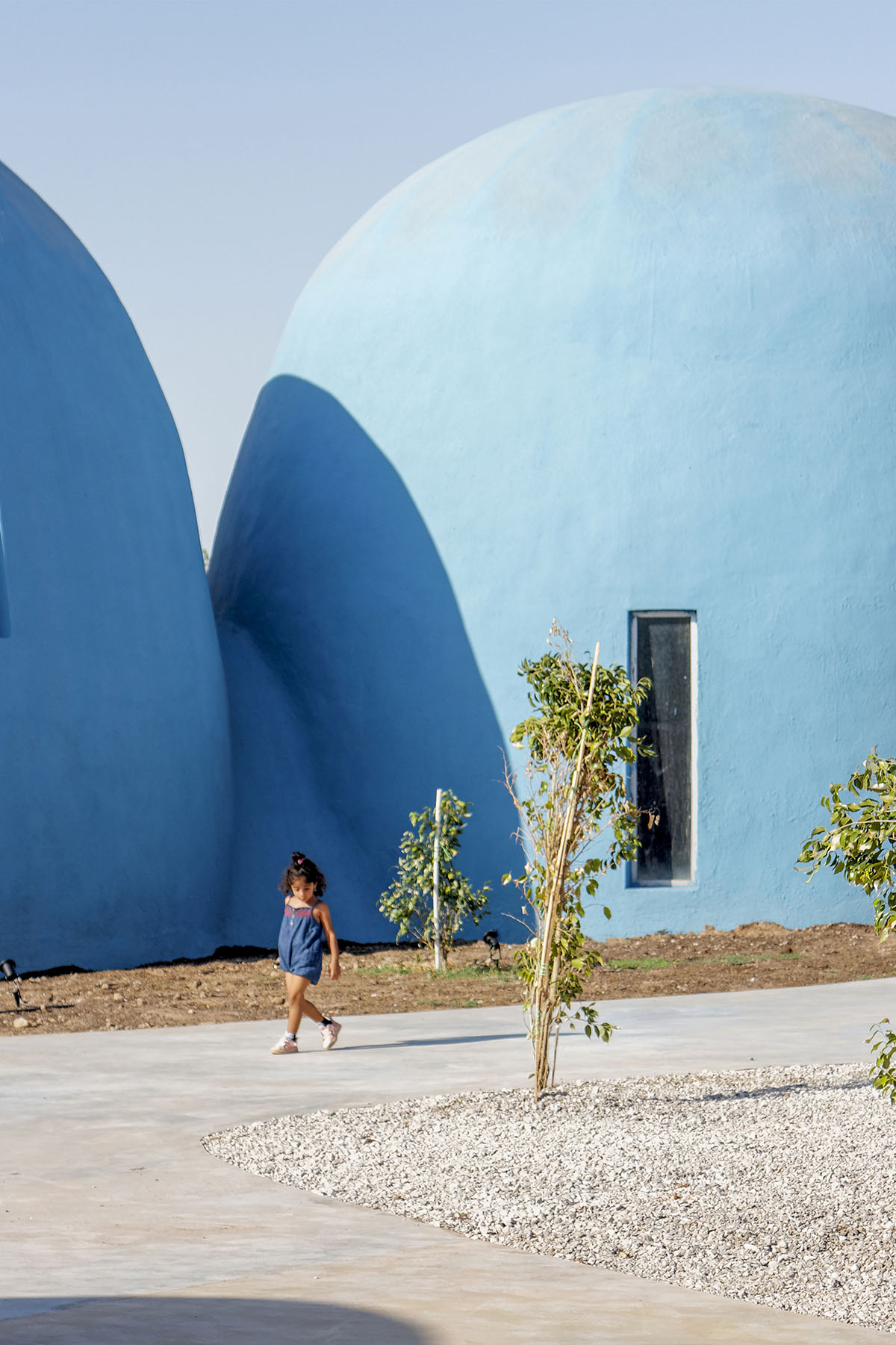 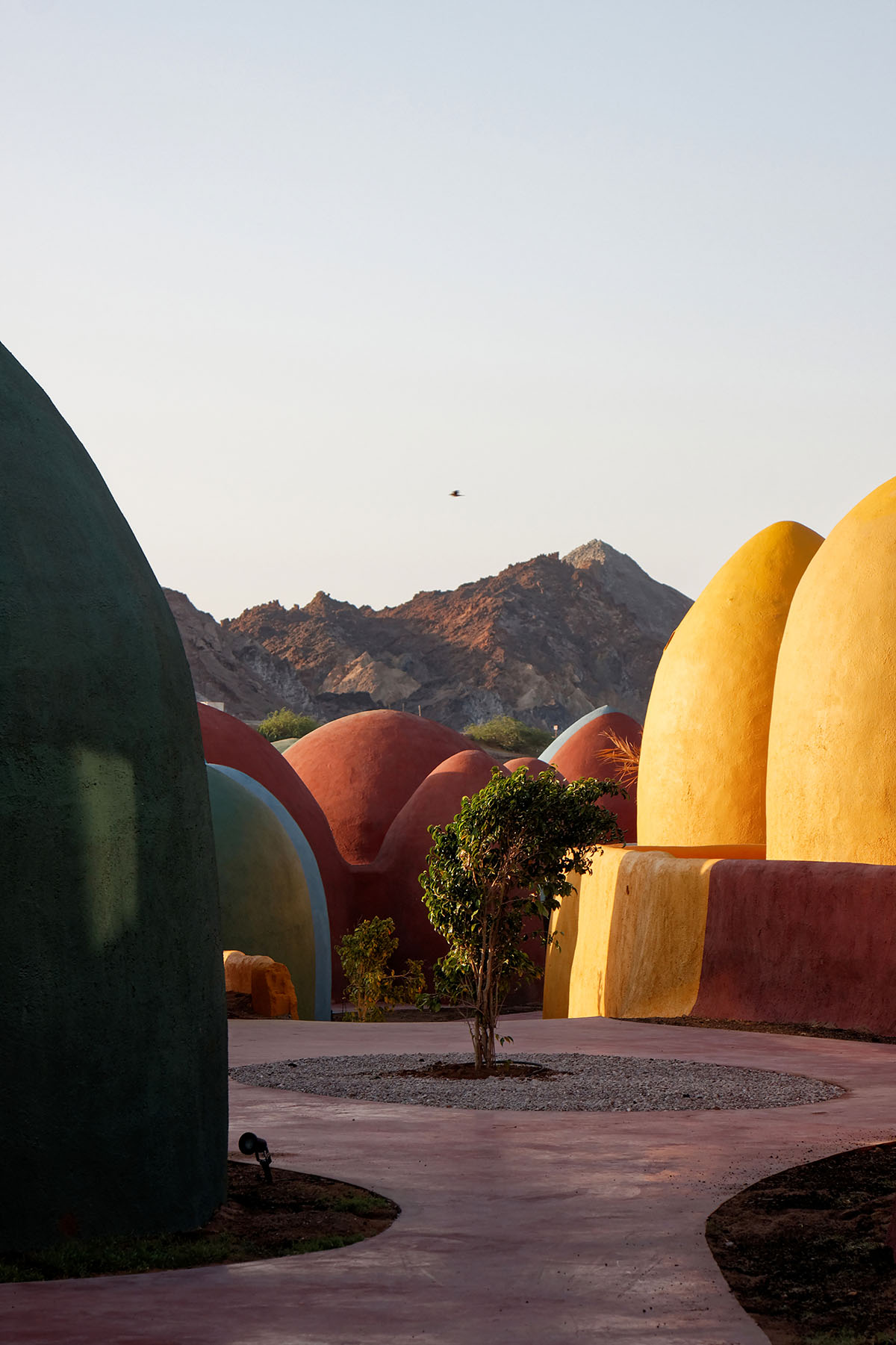 Adjacency of accommodation units in the lower level of the site. Image © Payman Barkhordari

In the interiors, the architects designed colorful interiors which is a continuation of the outside appearance of the development. The interiors are based on a simple layout - they are commonly filled with flexible arrangement. 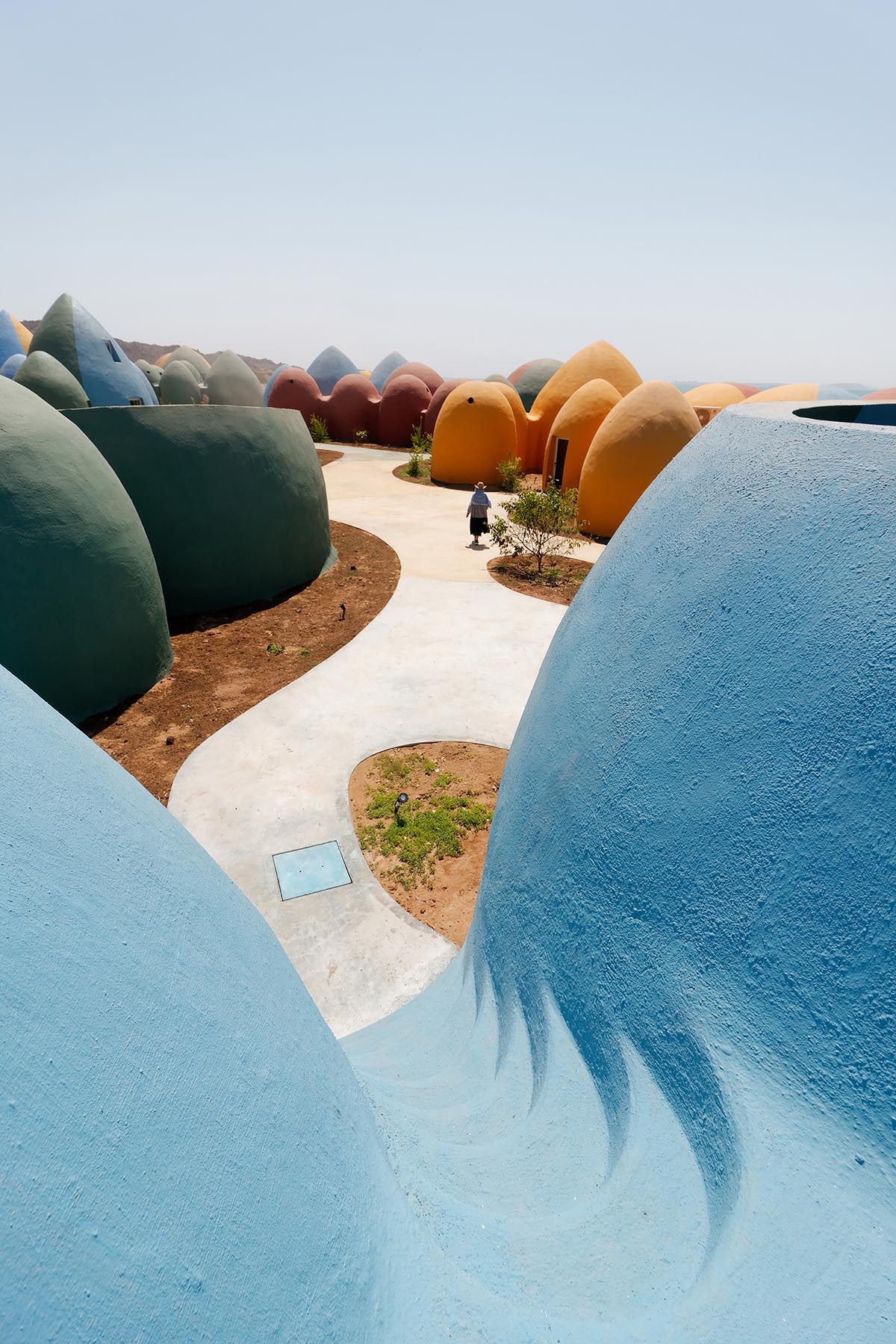 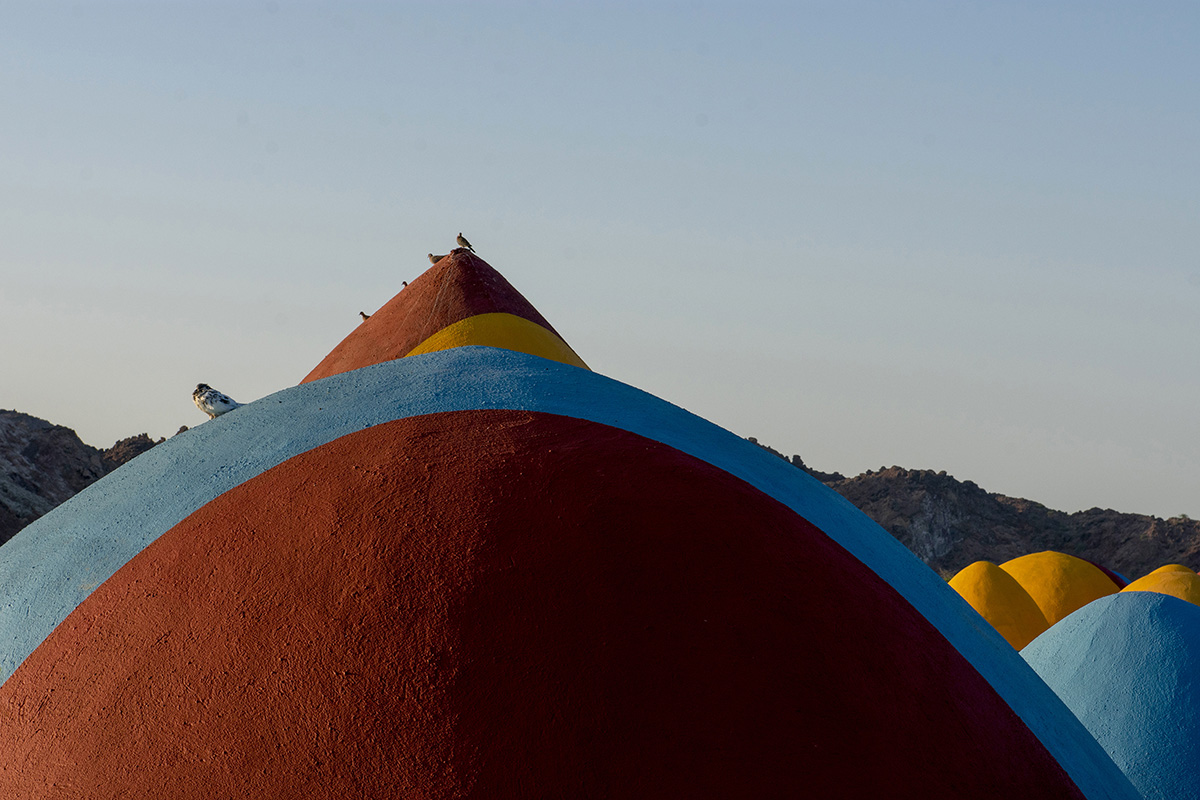 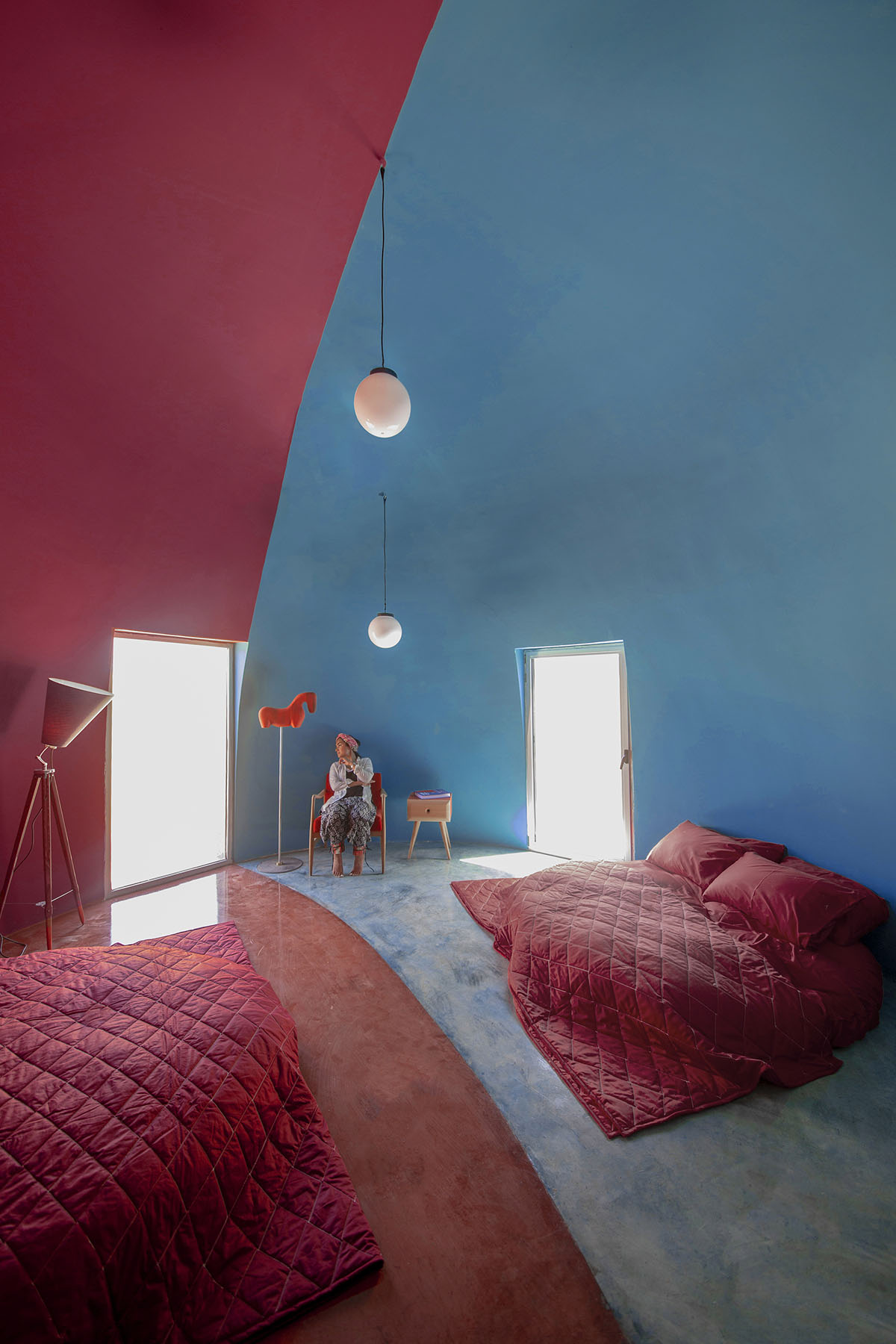 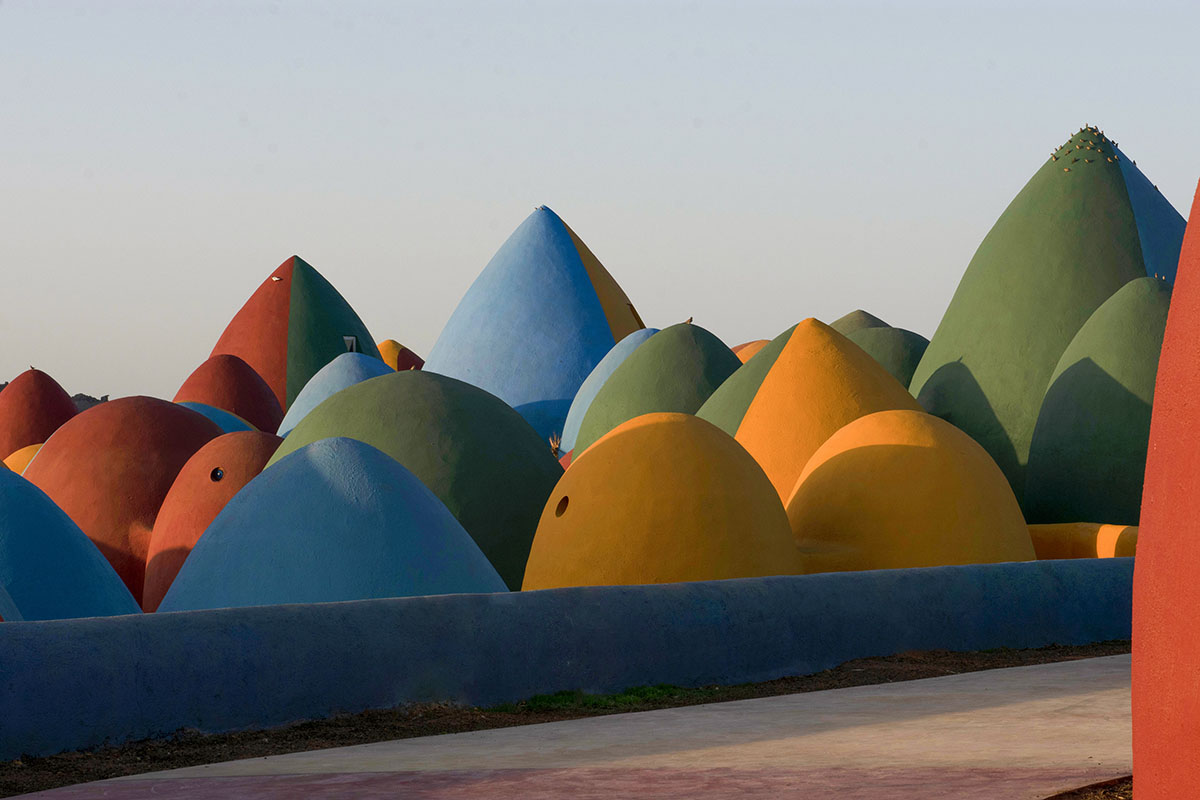 Adjacency of accommodation units in the lower level of the site. Image © Tahmineh Monzavi 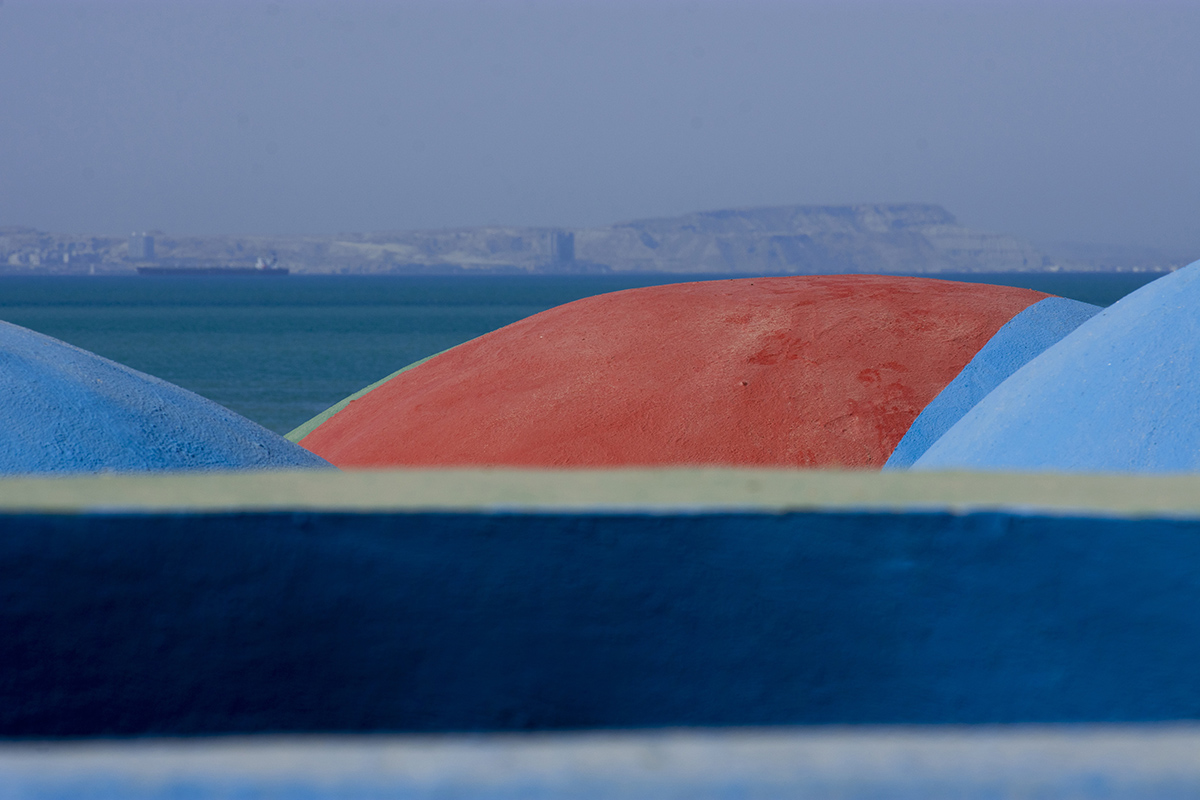 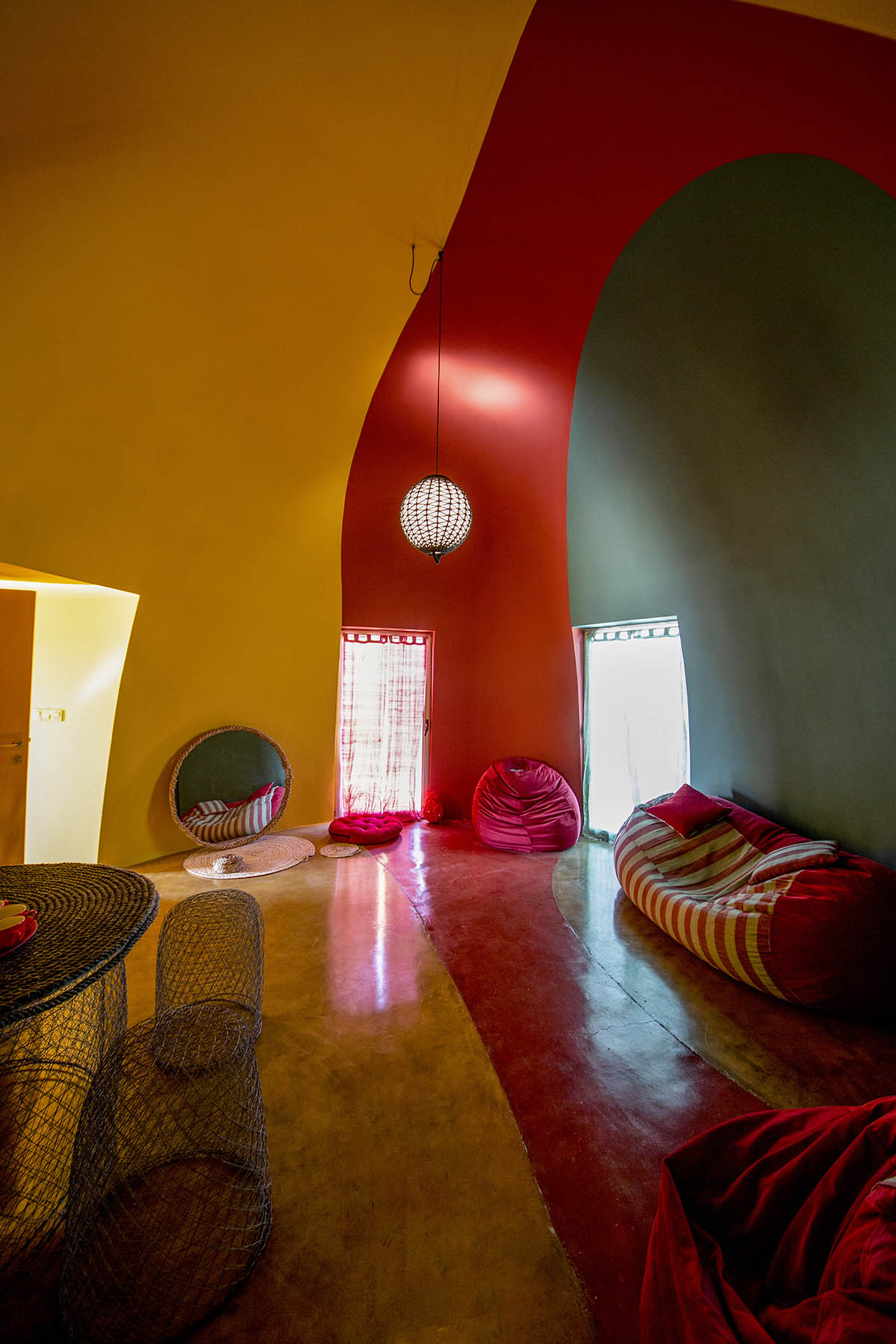 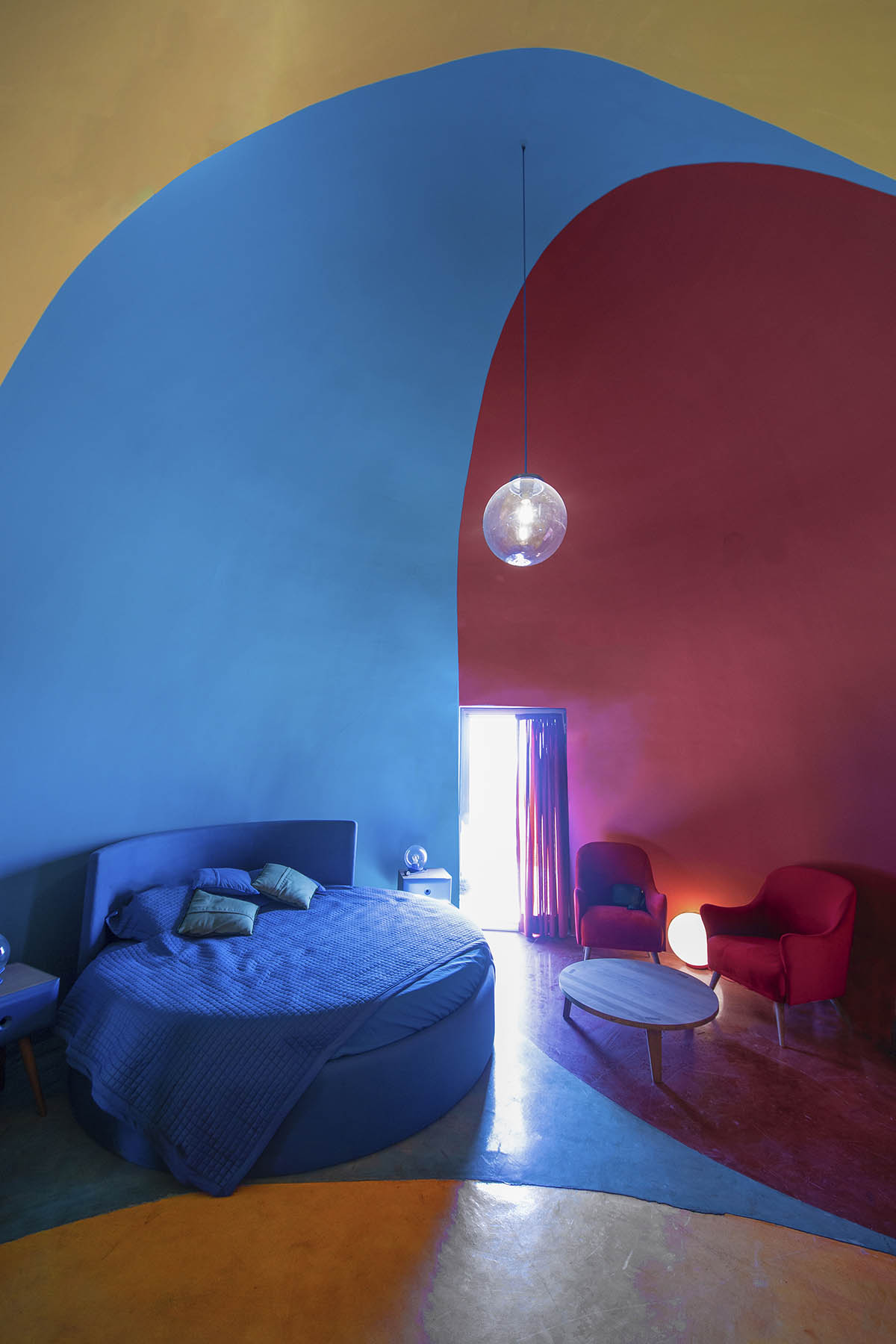 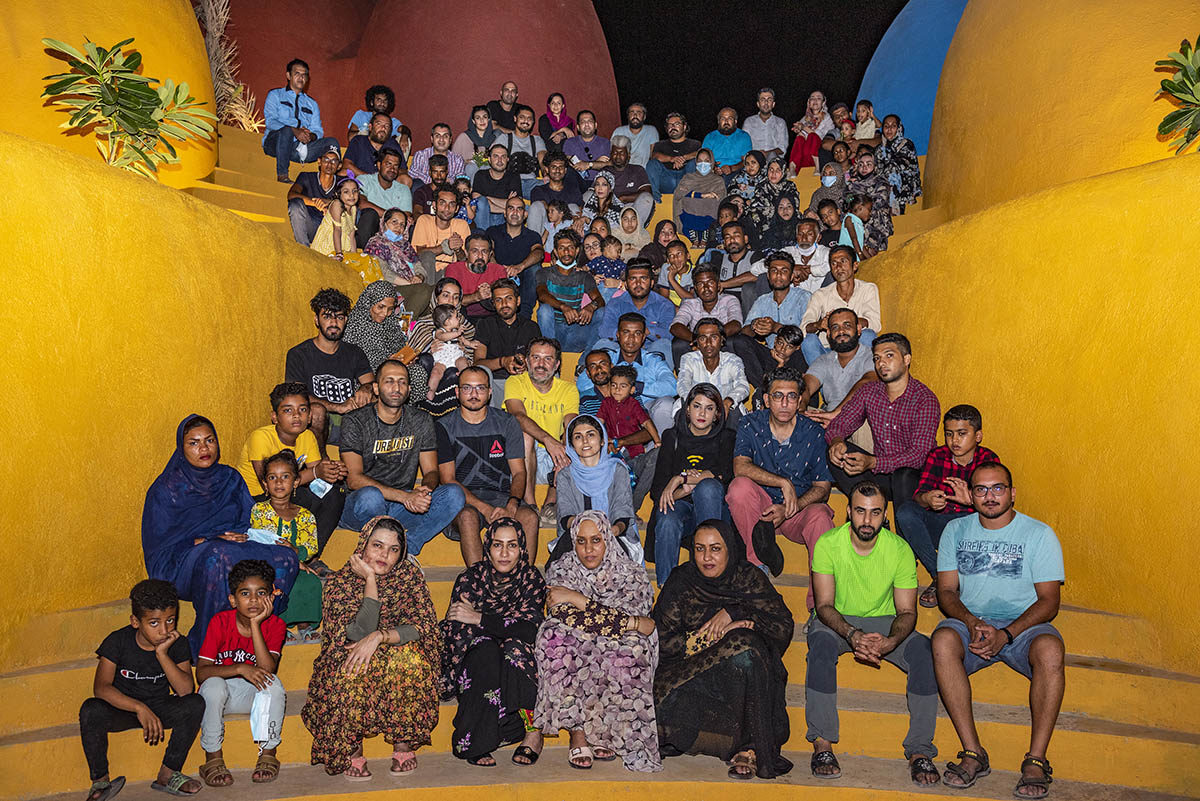 Group photo of different stakeholders and participants in the project. Image © Tahmineh Monzavi 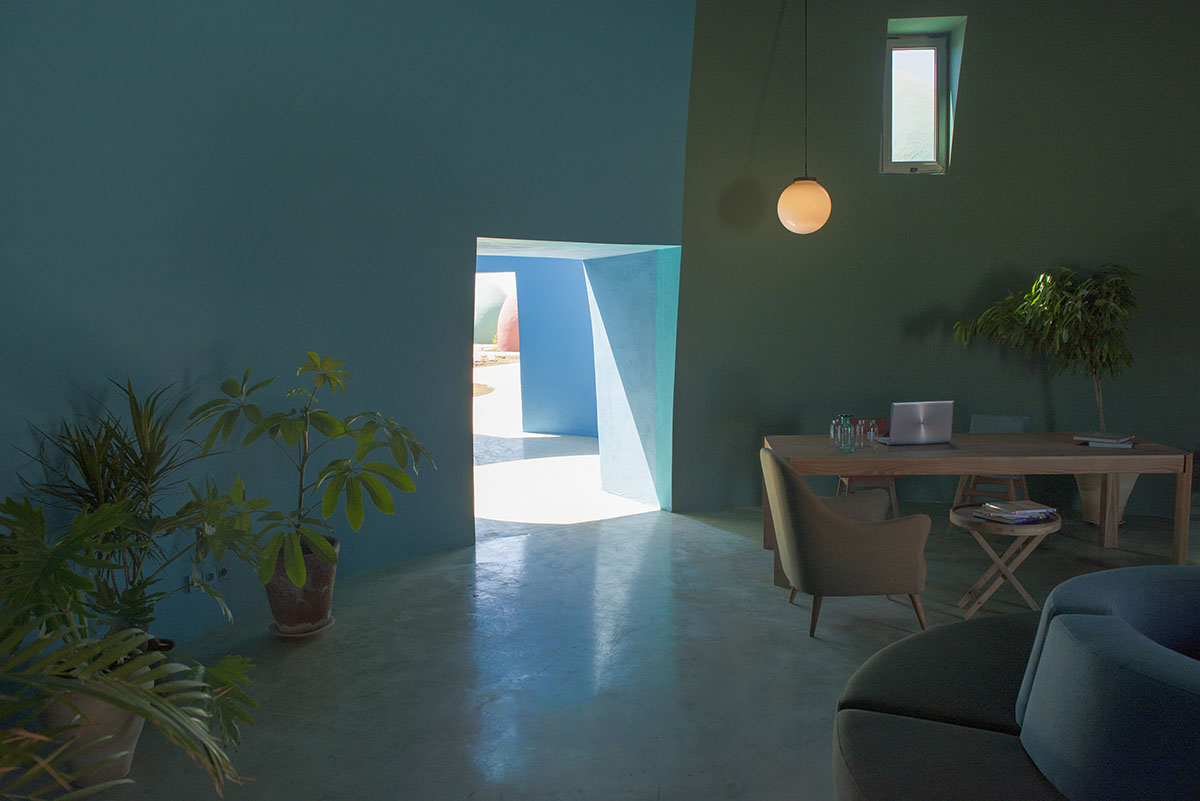 Visitors from different social classes in the restaurant of Majara Residence in coexistence. Image © Tahmineh Monzavi Charta as an interstice space between inside and outside. Image © Tahmineh Monzavi 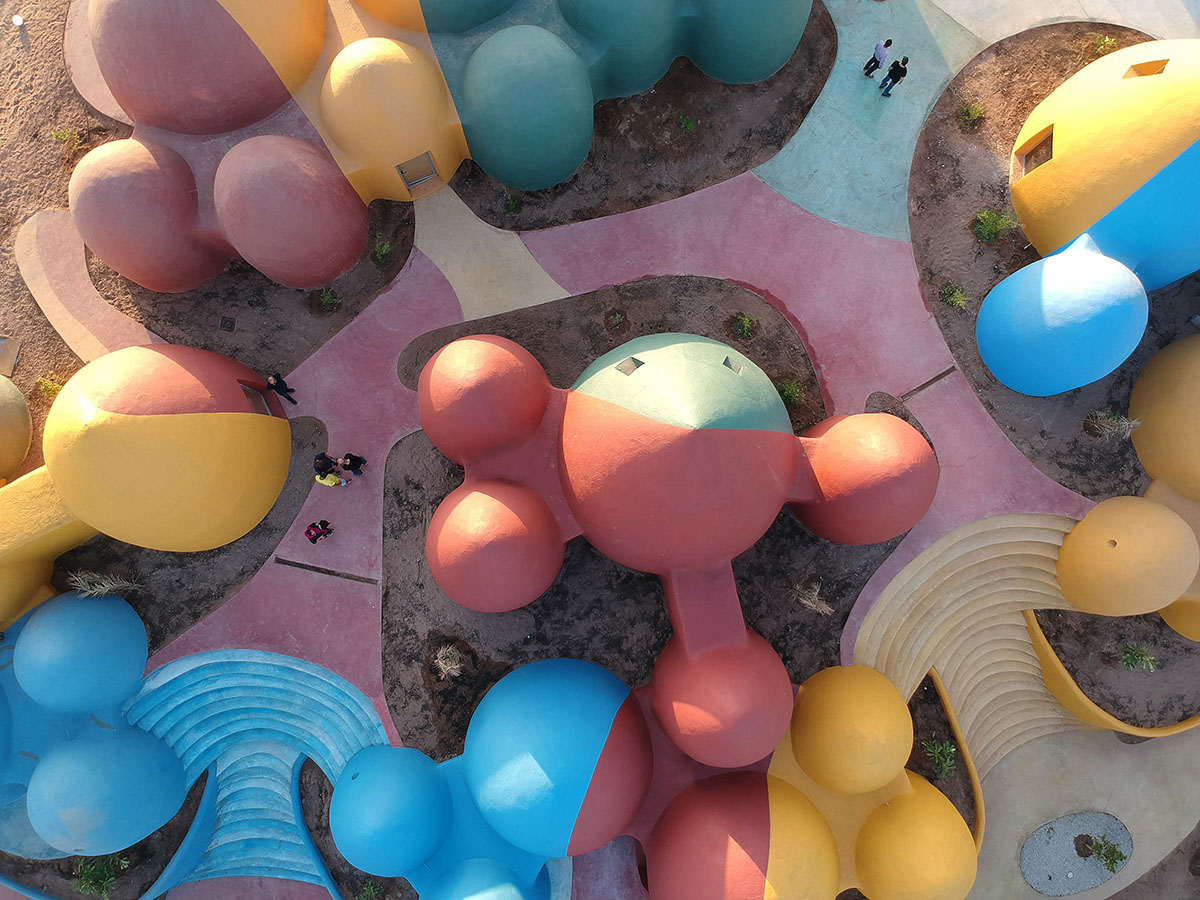 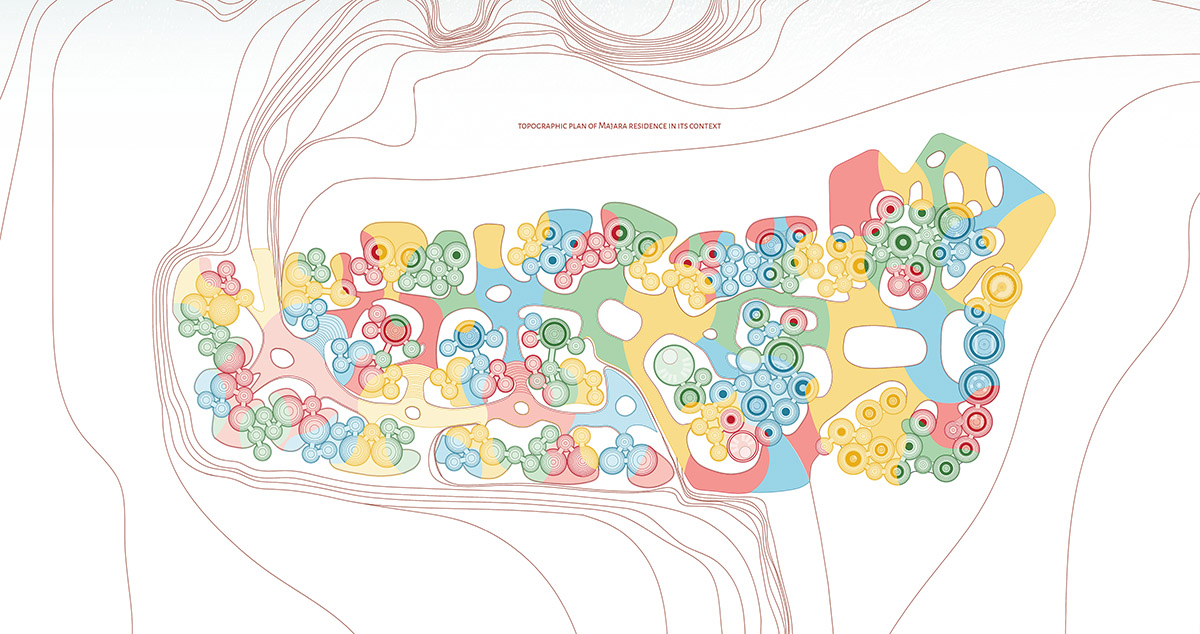 Topographic Plan of Majara Residence in its Context