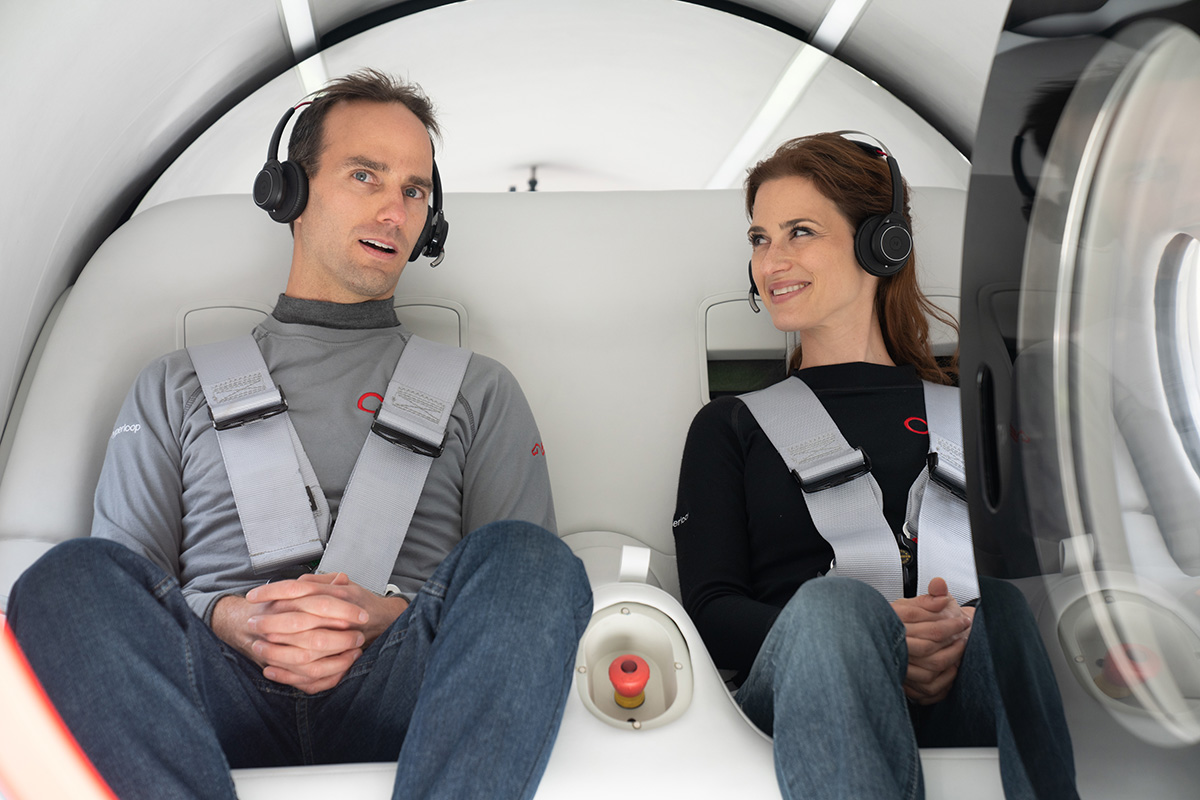 Virgin Hyperloop pod, designed by Bjarke Ingels Group and Kilo Design, is a custom-built vehicle with occupant safety and comfort, the vehicle is called "Pegasus" or "XP-2".

According to Virgin Hyperloop, the production vehicle will be larger and seat up to 28 passengers, "this 2-seater XP-2 vehicle was built to demonstrate that passengers can in fact safely travel in a hyperloop vehicle." 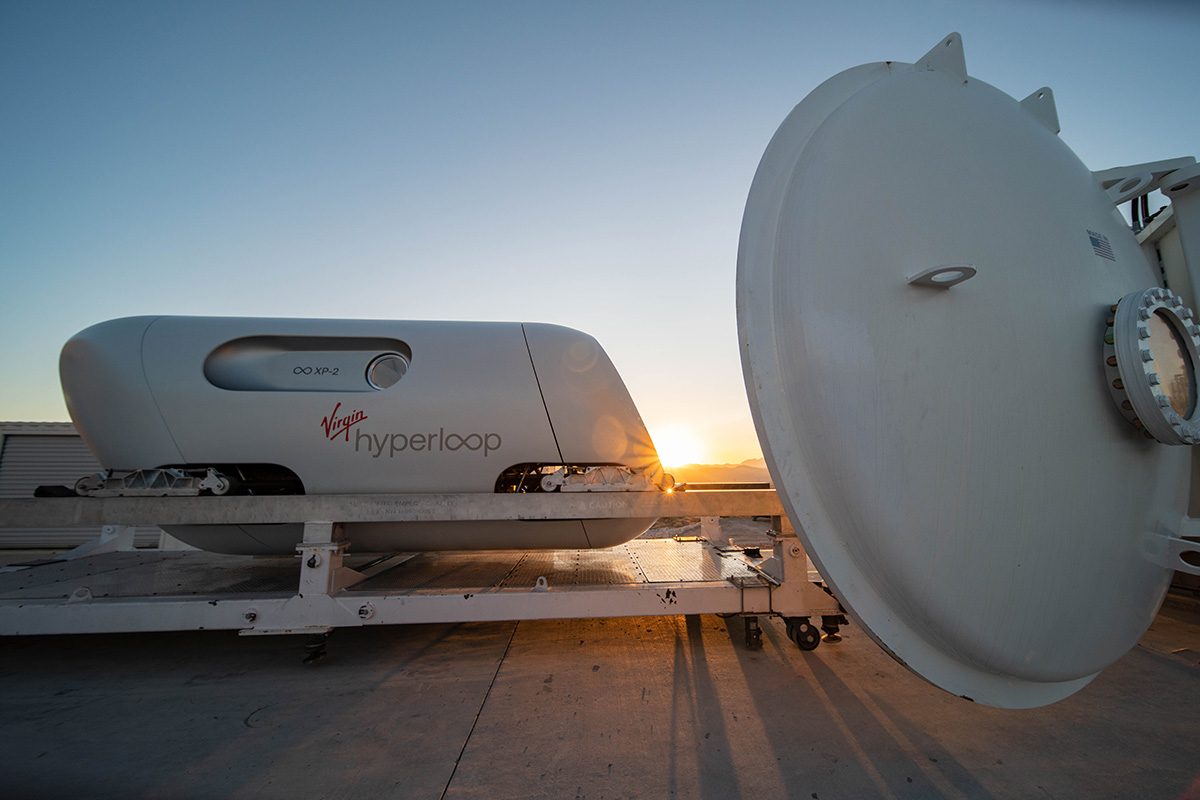 The two passengers made their first travel in a new type of transportation on November 8, a new vehicle typology for an autonomous system achieves Hyperloop travel at the speed of over 1,000km/hour, the fastest form of land-based travel.

After over a year of close collaboration with Virgin Hyperloop, the first passengers tested this trial form of transportation at Virgin Hyperloop's 500m DevLoop site in Las Vegas, where the company has previously run over 400 tests in un-occupied pods. 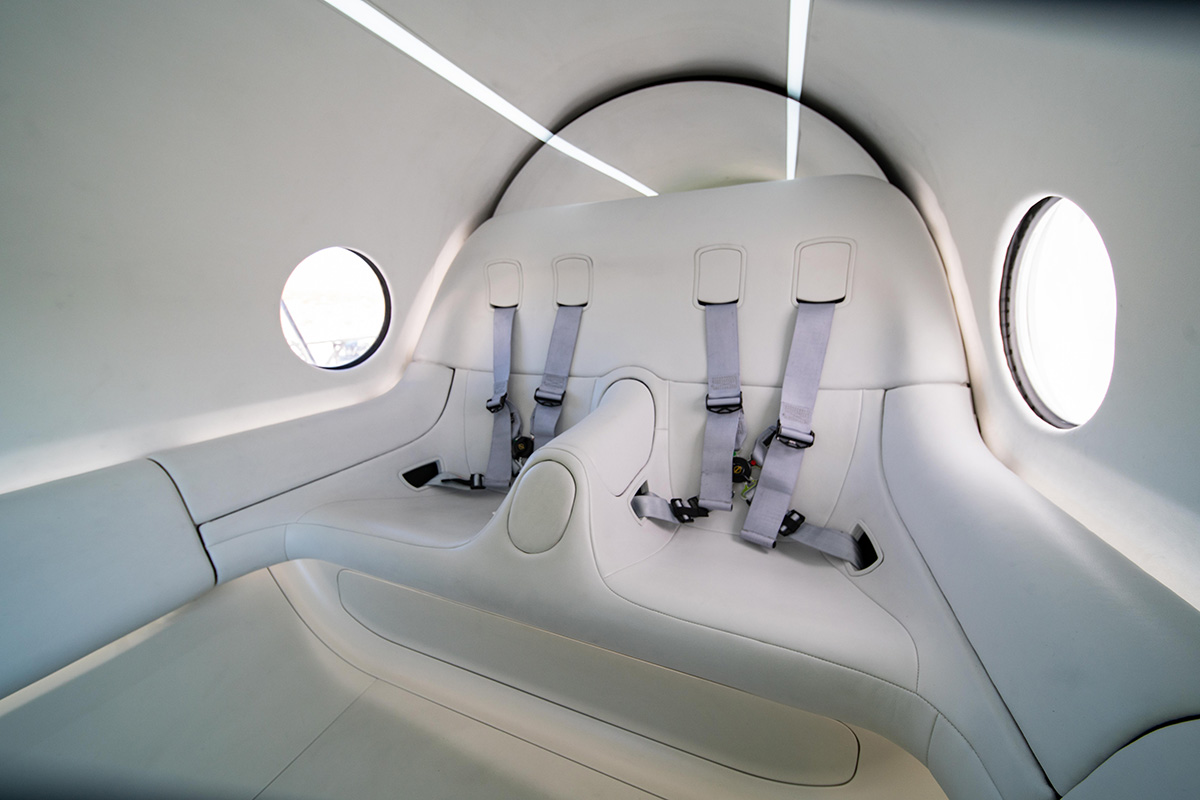 The demonstration was overseen by the industry-recognized Independent Safety Assessor (ISA) Certifier, and its success marks a historic moment in transportation, as Pegasus or XP-2 becomes the firs manned and fully functional system for Hyperloop travel, noted BIG in its website.

Josh Giegel, Co-Founder and Chief Technology Officer, and Sara Luchian, Director of Passenger Experience, were the first people in the world to ride on this new form of transportation. 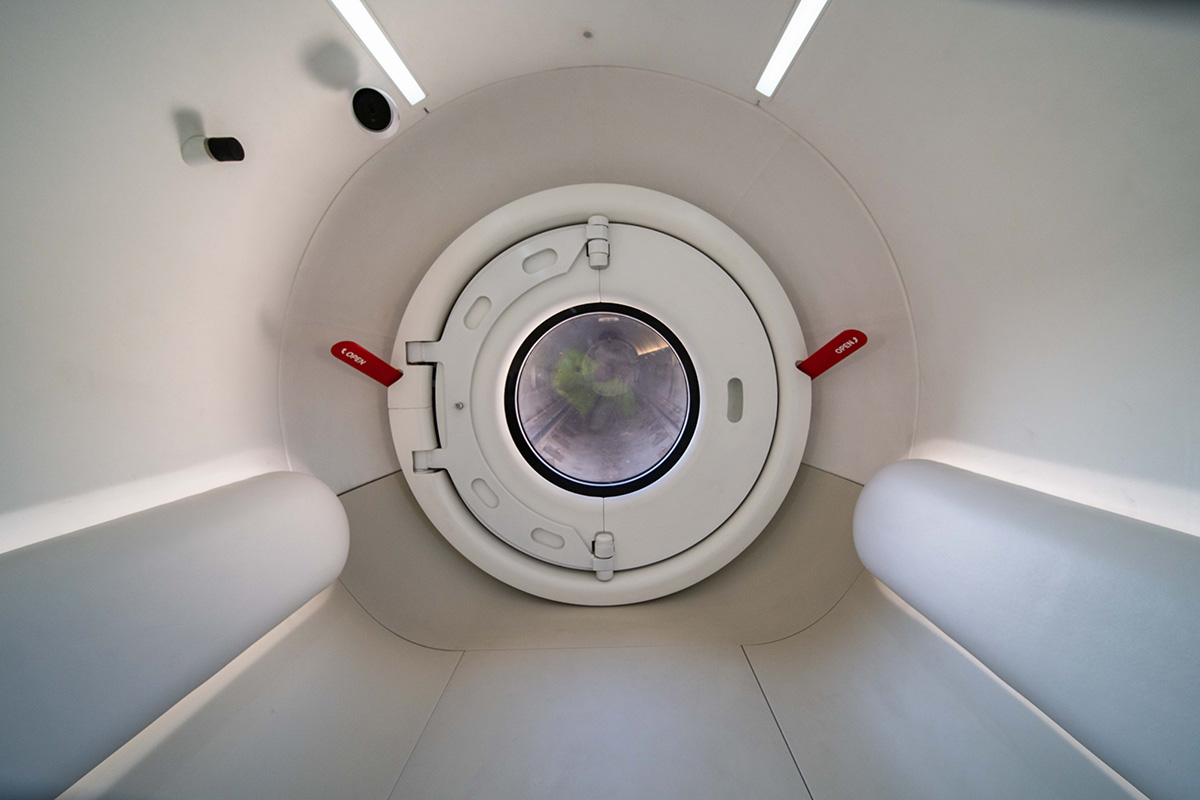 "When we started in a garage over 6 years ago, the goal was simple – to transform the way people move," said Josh Giegel, Co-Founder and Chief Technology Officer of Virgin Hyperloop.

"Today, we took one giant leap toward that ultimate dream, not only for me, but for all of us who are looking towards a moonshot right here on Earth."

"Hyperloop is about so much more than the technology. It’s about what it enables," said Sara Luchian, Director of Passenger Experience for Virgin Hyperloop.

"To me, the passenger experience ties it all together. And what better way to design the future than to actually experience it first-hand?." 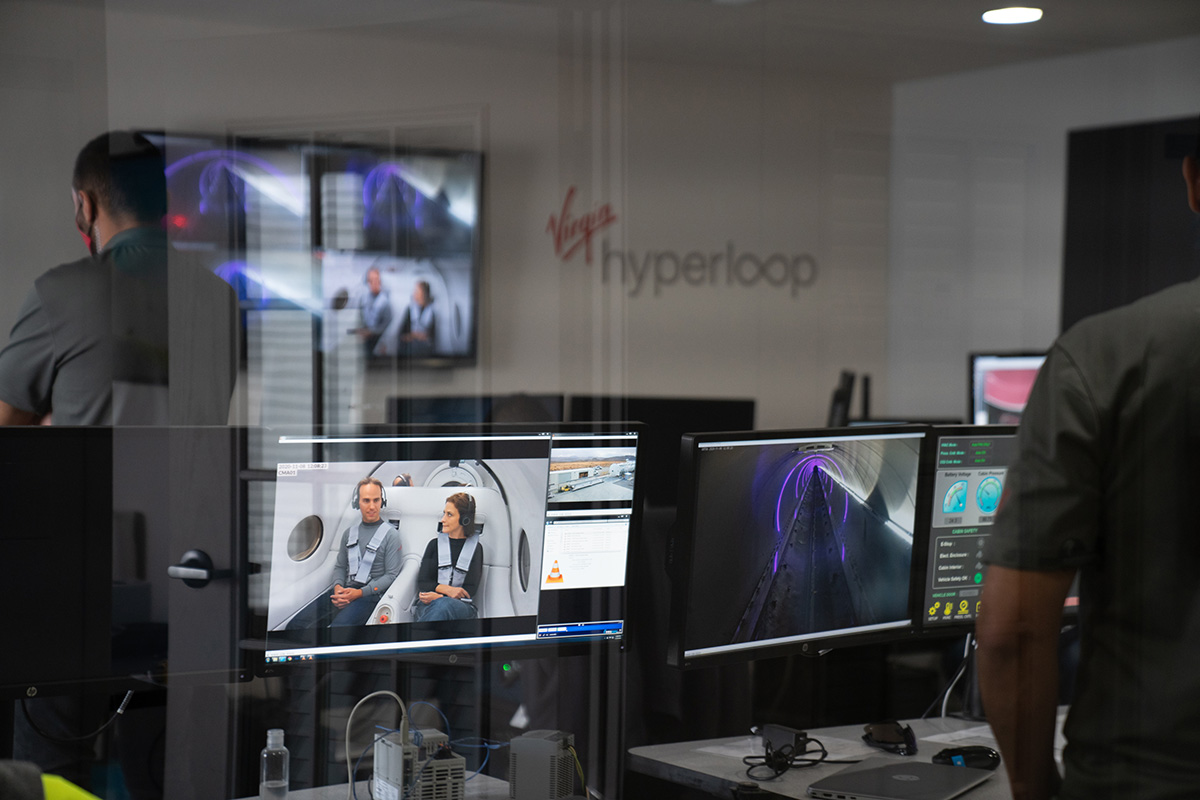 The interior design of Hyperloop vehicle "focuses on unifying and covering both the pressure vessel and sled, creating a seamless appearance that combines both performance and human-centered characteristics," as stated in BIG's website.

This environment makes the transportation system much more energy efficient than traditional rail transit. It is engineered with magnetic levitation and avoids the drag of wheels, allowing for the maximum amount fo speed to move the maximum number of passengers or cargo.

Pegasus or XP-2 pods move individually as well, with a high arrival and departure allowing for on-demand travel.

"The front ‘scoops’ of the vessel create natural steps for comfortable entry and egress, and apertures on the sides of the fairing as well as the front door contain a forward-facing window for outward viewing down the tunnel," said BIG.

Inside, the seating elements and extended arms serve multiple functions including as agentry and egress aid, and as storage for safety equipment, oxygen throughput and lighting.

The seats can also be quickly assembled and disassembled for rear equipment access. BIG stated that Pegasus demonstrates many of the safety-critical systems that will be found on a commercial Hyperloop system and is equipped with a state-of-the-art control system that can detect off-nominal states and rapidly trigger appropriate emergency responses.

The interior of the pod covers only a 6-square-metre space. 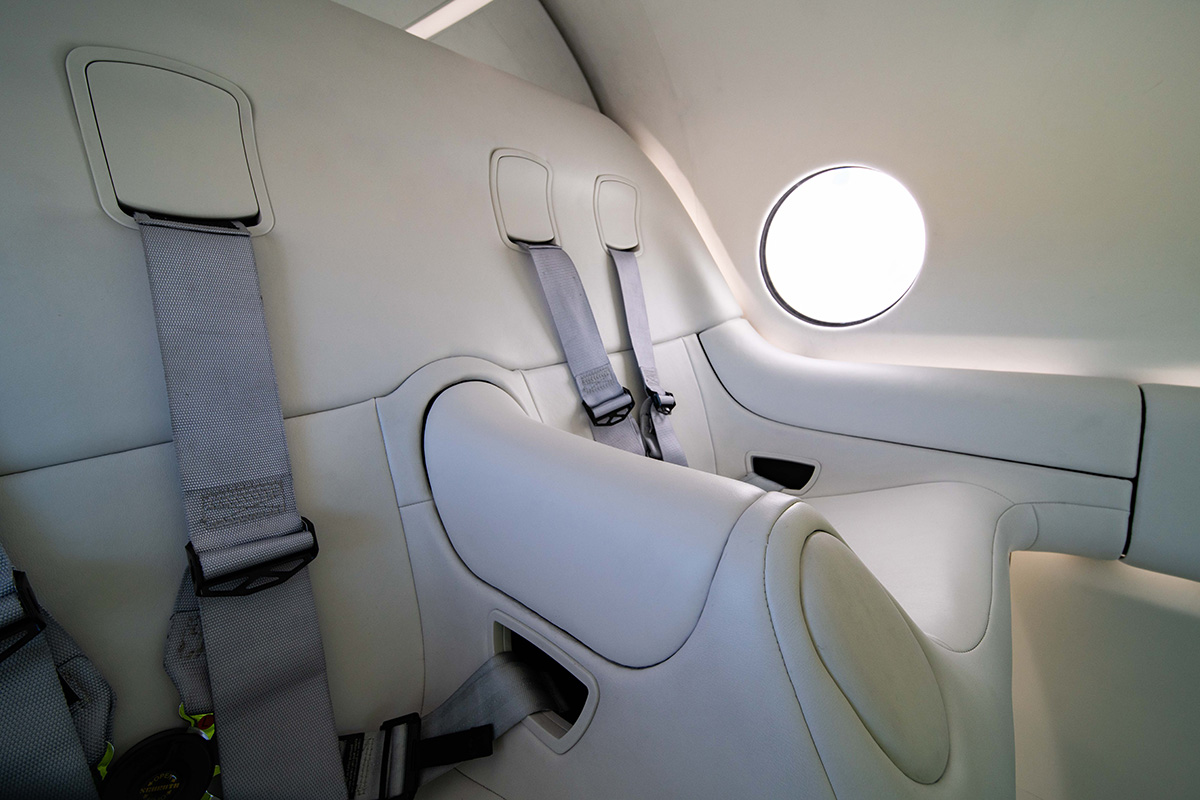 Hyperloop technology was first unveiled by Elon Musk, founder of SpaceX, Tesla Motors and co-founder of PayPal. Later, Musk explicitly open-sourced the technology so that everyone can benefit and develop the idea further.

Musk first founded Hyperloop Technologies in a garage in Los Angeles' Los Feliz neighborhood in June 2014. In December 2015, the company establishes the Apex Test And Safety site in the desert outside of North Las Vegas, Nevada. The company changed its name to Hyperloop One to underscore its status as the first and only company building a full-system Hyperloop.

The company was renamed as Virgin Hyperloop One in 2017 after Richard Branson made a major investment to the company.

All images courtesy of Virgin Hyperloop.