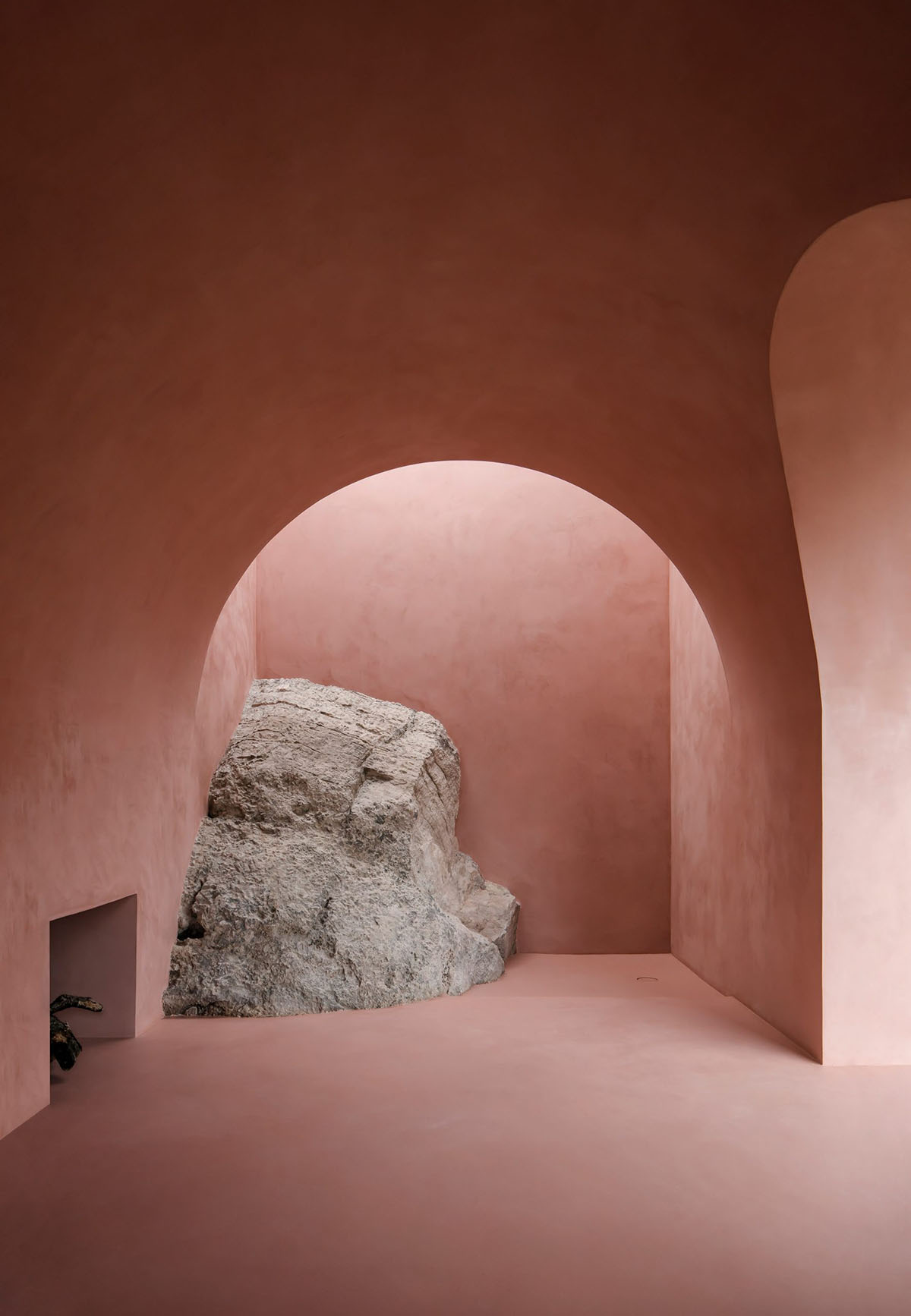 Valencia-based architecture studio Mar Plus Ask has built a pair of tiny retreats that are washed by the tones of pink and purple inside in Mallorca, Spain.

Named The Olive Houses, the two houses offer an intimate and colorful atmosphere for guests who want to stay in these houses.

The interiors provide an inspiring ambiance for artists, architects or writers who want to be productive in this quiet atmosphere.

The houses are located on an isolated redoubt of the Tramuntana mountains, The Olive Houses stand in the company of millenary olive trees and massive rock formations. 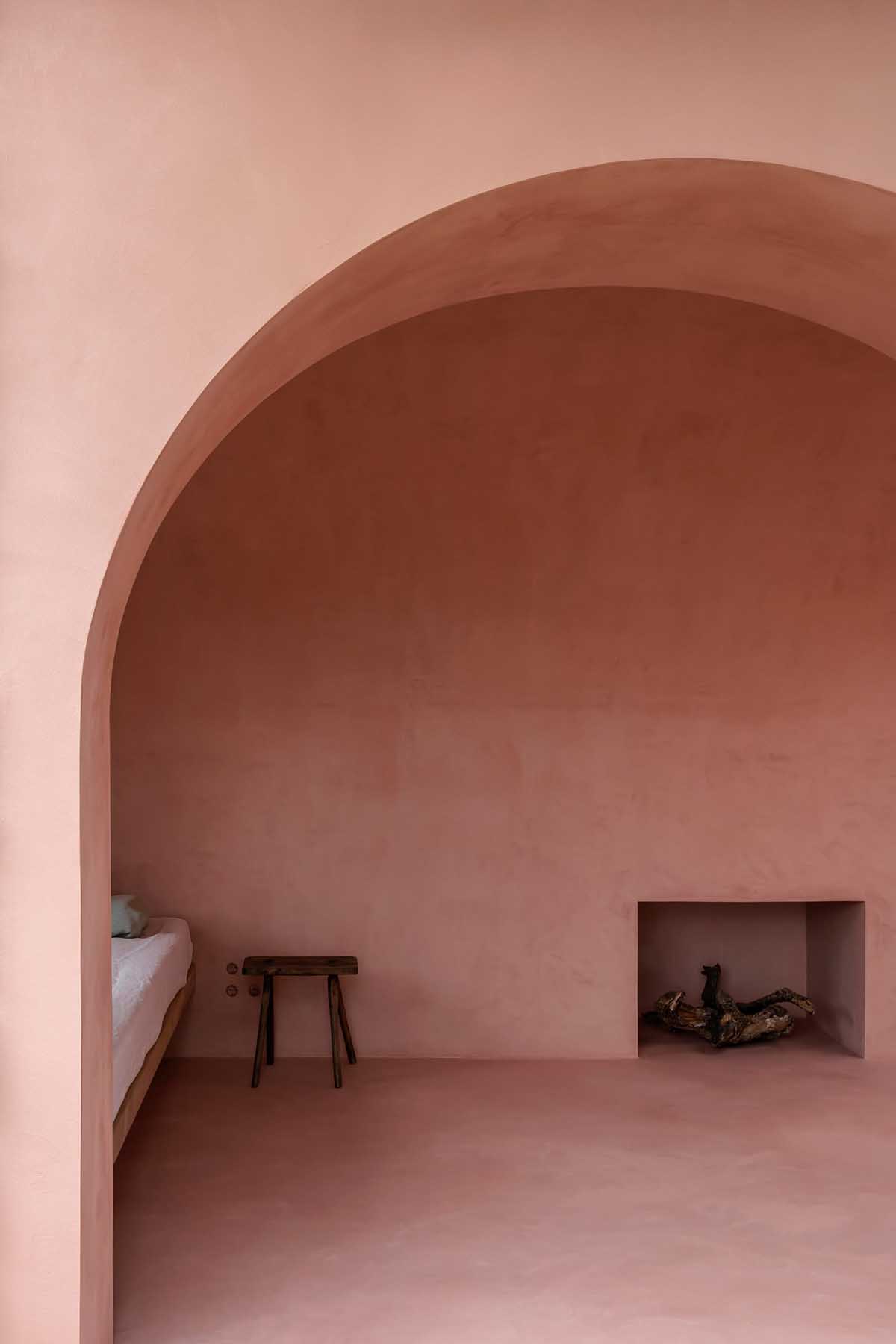 "The stone terrace walls and gentle trimming of the olive trees are the sole sign of human intervention in this beautiful example of Mallorquin landscape," said Mar Plus Ask in its project description.

One of the houses is named The Pink House, which is built around a giant rock which is undoubtedly the main character in the space.  The interior space is kept as minimalistic as possible, which is painted by pink stucco, an arched door is marks the space. The house contains a bed, shower and fireplace with large central space. Beside it, an open shower is installed fed by rain water collected and filtered on the roof and illuminated naturally with a skylight.

A bed under the views of the valley on the opposite wall and a fireplace between the two giving warmth and keeping the space dry. The elements needed for a comfortable sleep feeling as close to nature as possible. 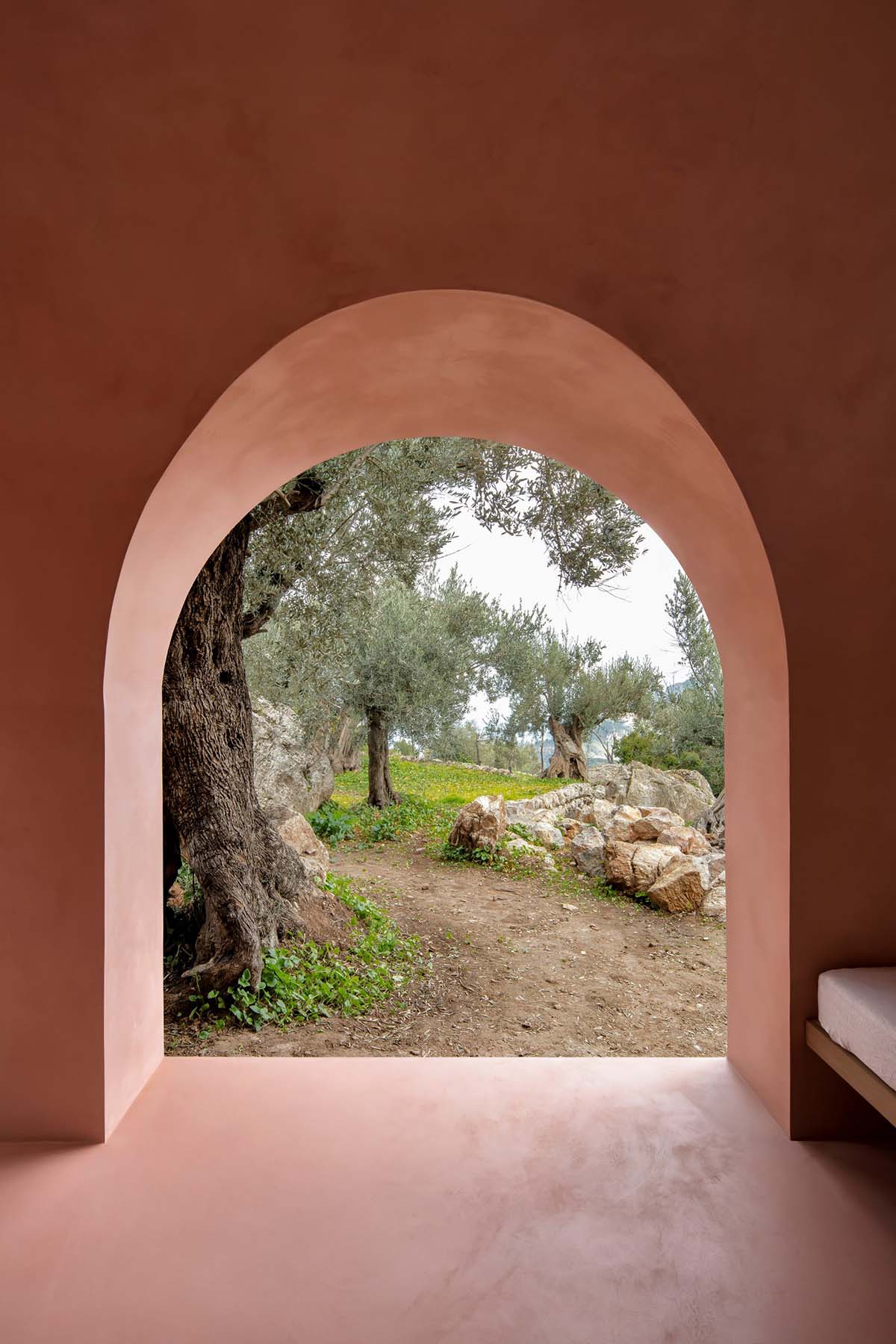 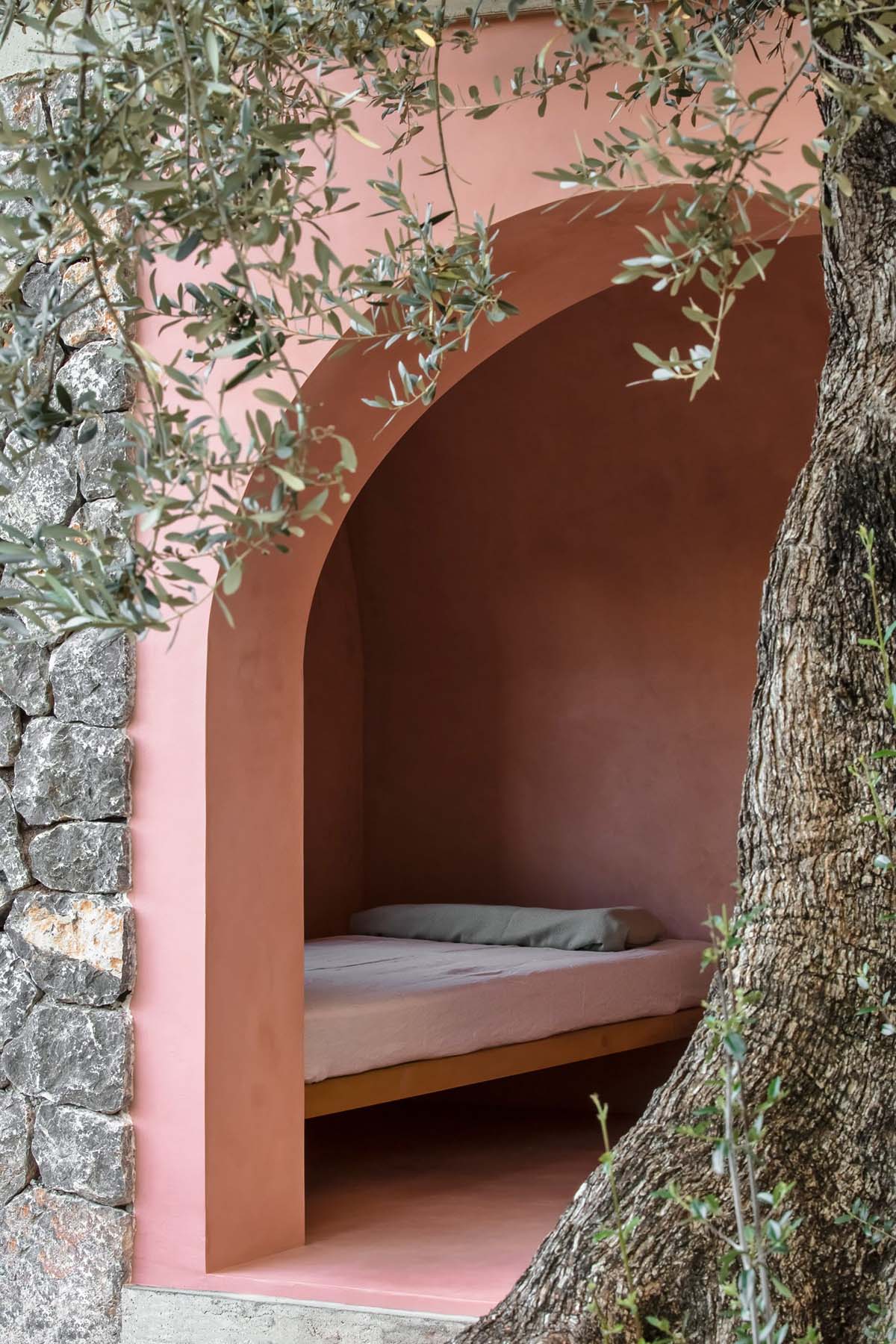 The entrance of the Pink House is perceived directly from outside, while giving a view to nature. "In this project the site itself, which we didn’t want to alter, dictated what to do."

"Both constructions are rendered in stucco-like material in a tone of pink and purple - complementary to the two tones of green found on the two sides of an olive leaf, one matte one glossy," added the studio. 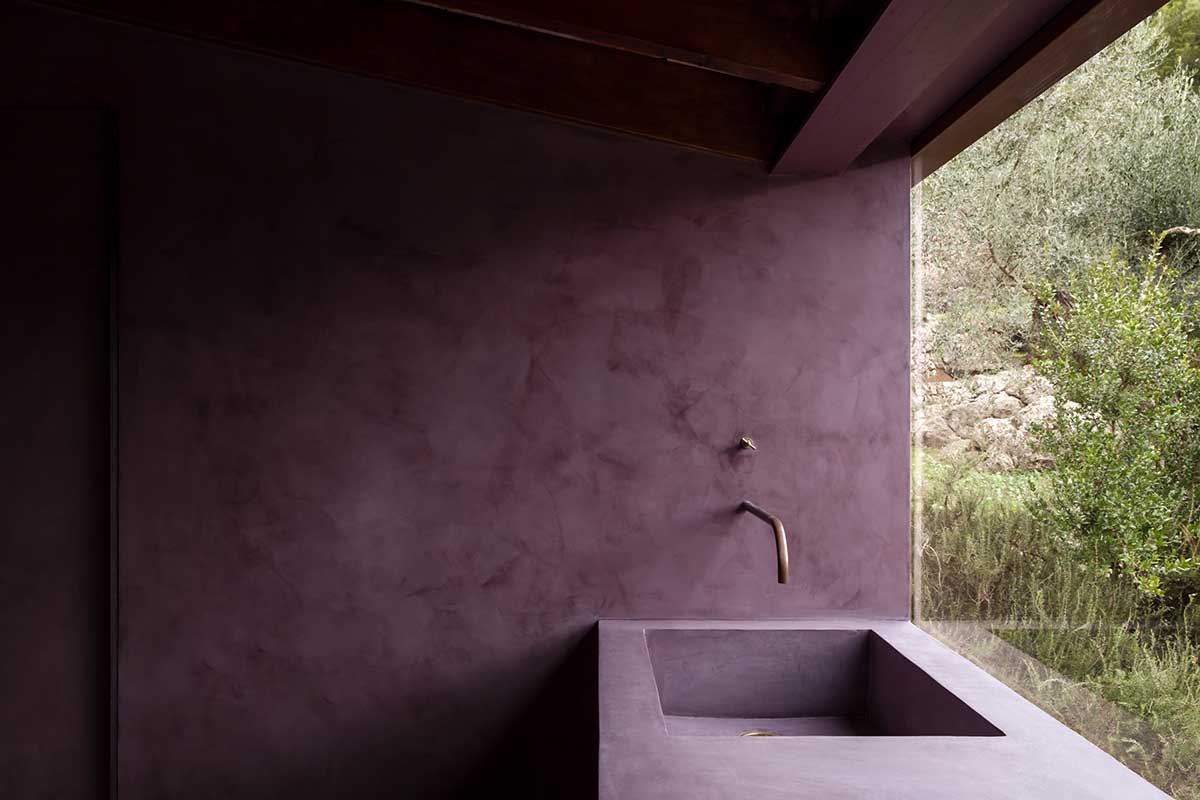 The other house is named the Purple House which is washed by entirely purple-stucco. For this house, the studio converted a disused shed into a comptemporary guest house, which was previously used to store tools. 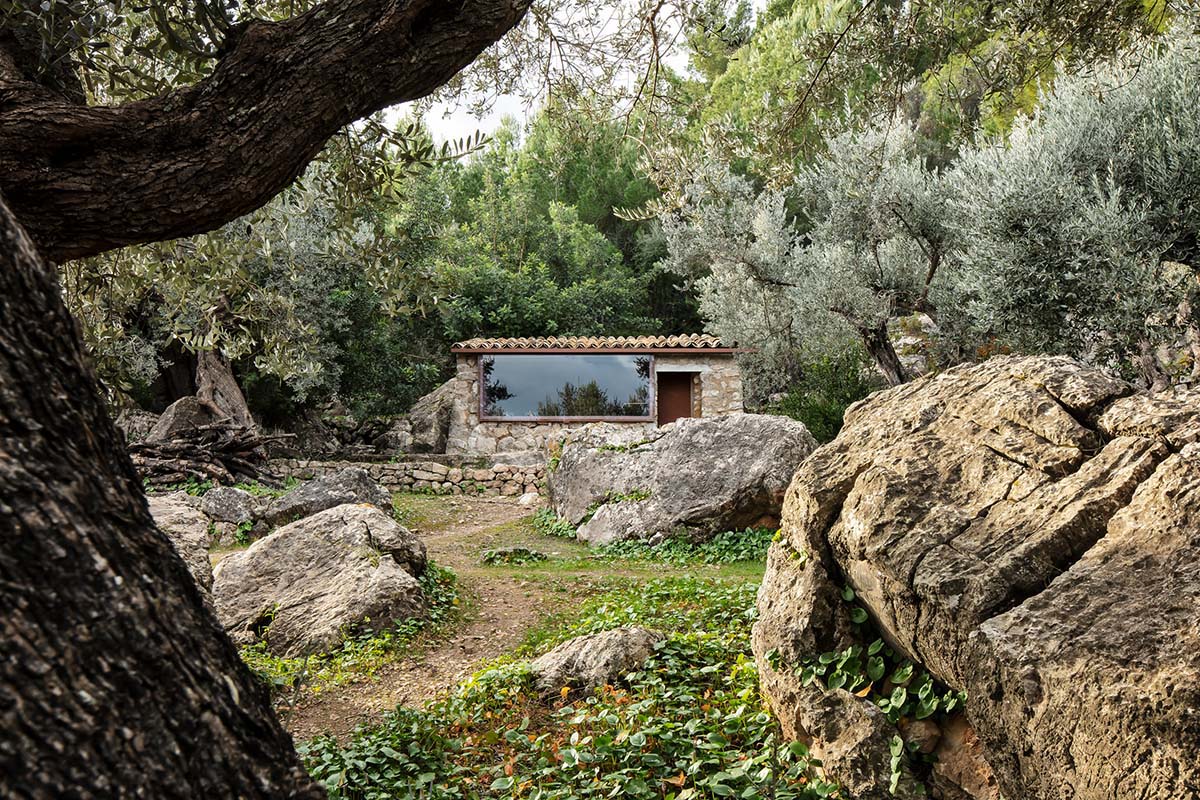 The kitchen area and the restroom is built in an existing toolshed some meters away, the Purple House. To get to the new dutch door, guests’ll have to walk past some big rock formations that force them to meander and turn before they can enter. 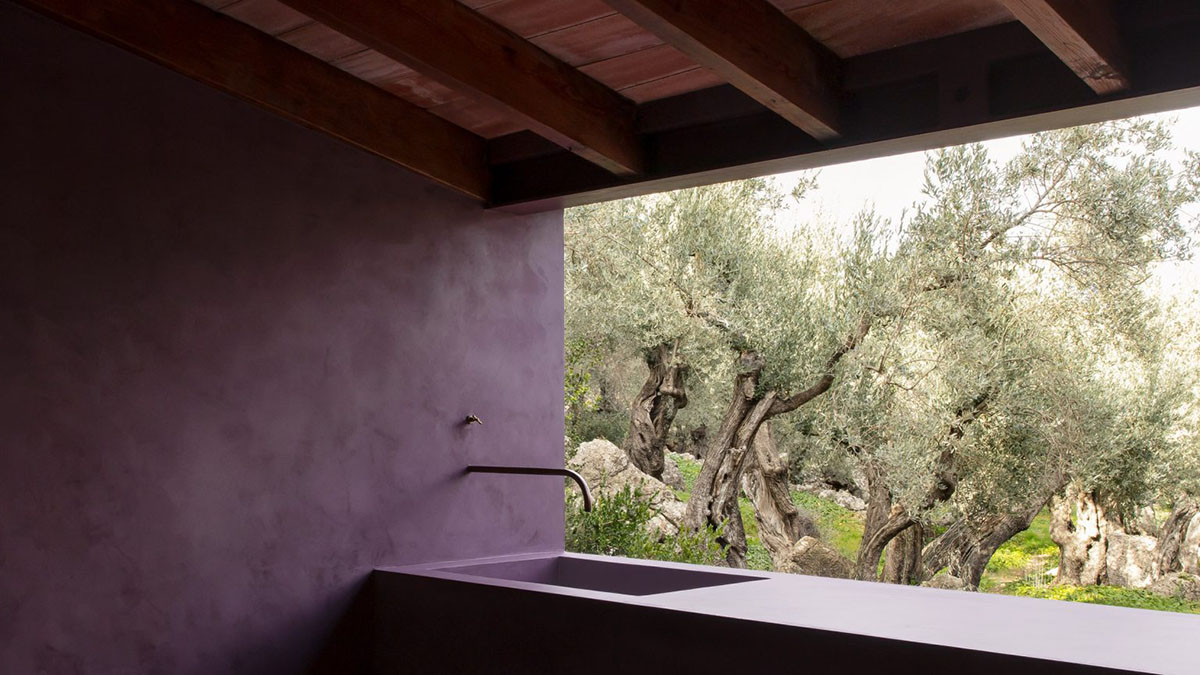 As the space was narrow and small, the kitchen was build inside a cutout in the thick stone walls and closed with an outside opening frameless window.

The houses are powered only by solar panels and the water comes from the water spring on the plot. 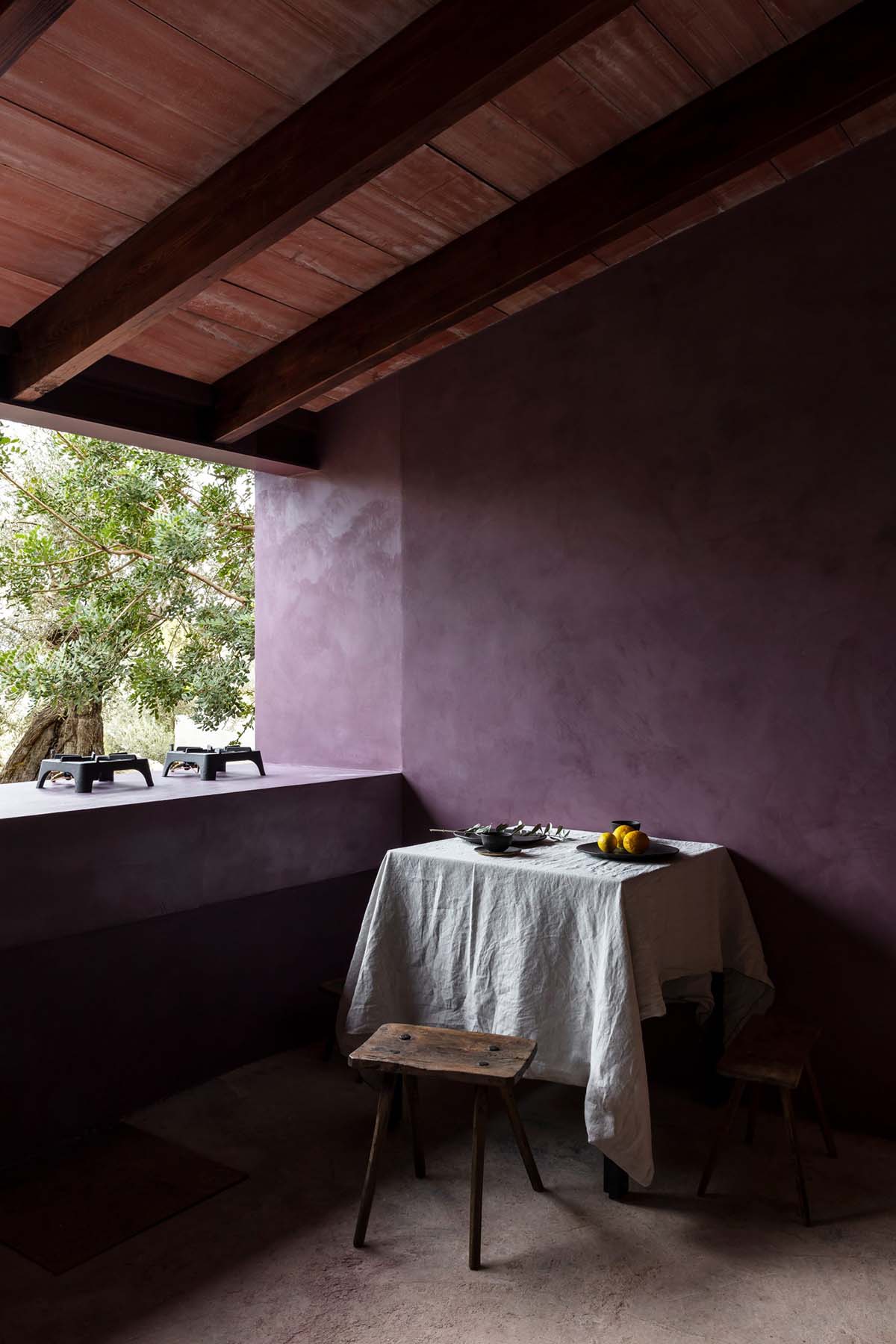 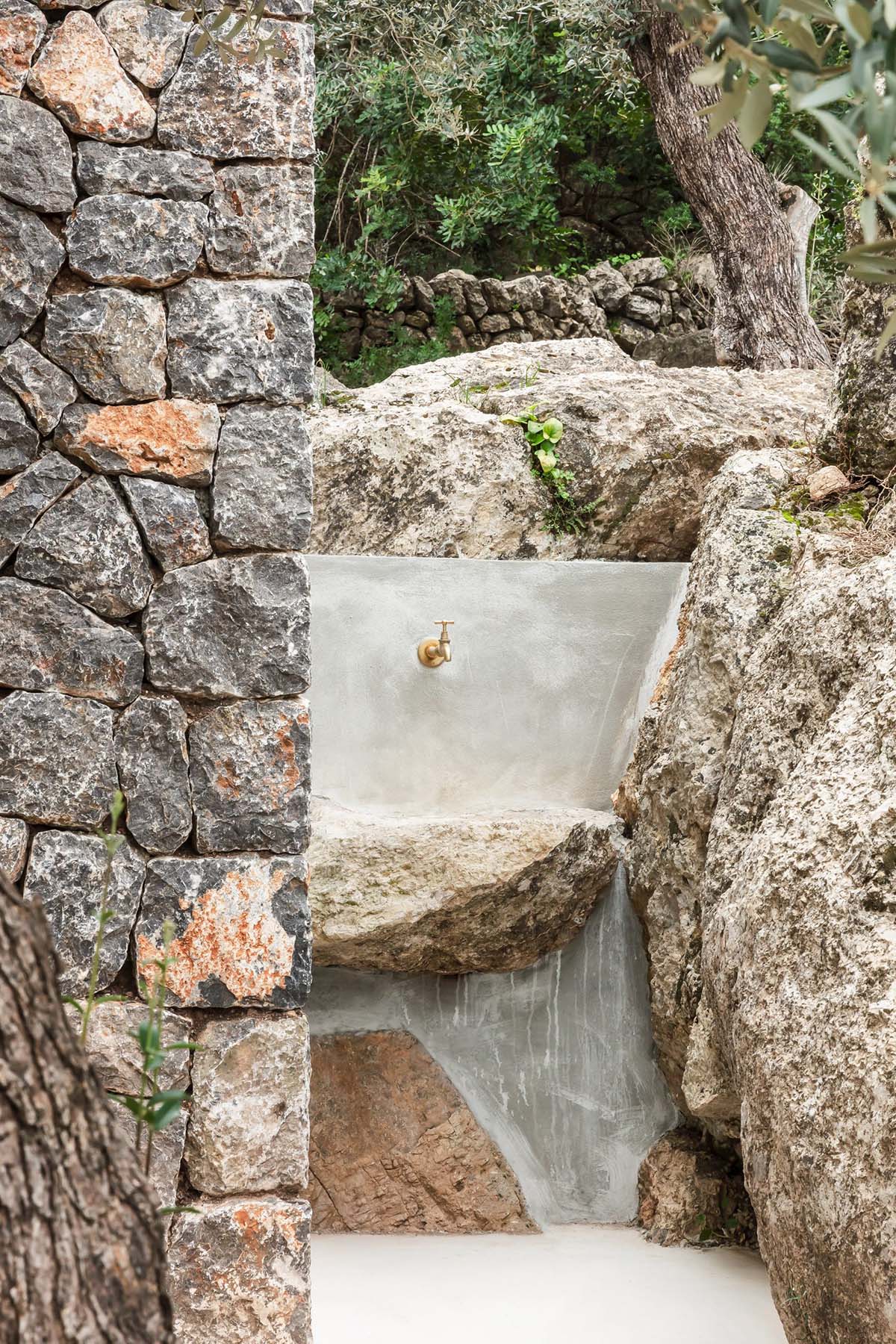 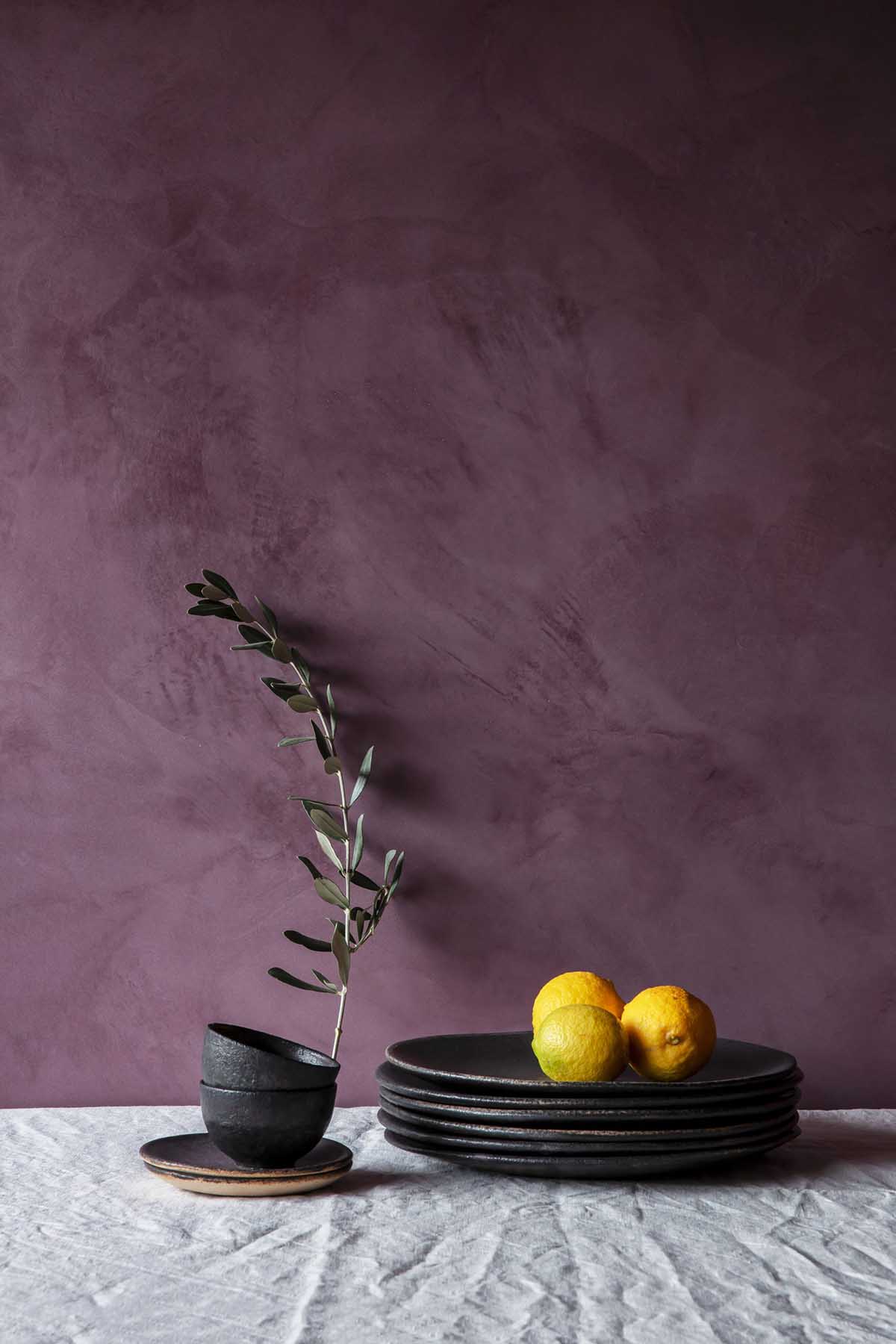 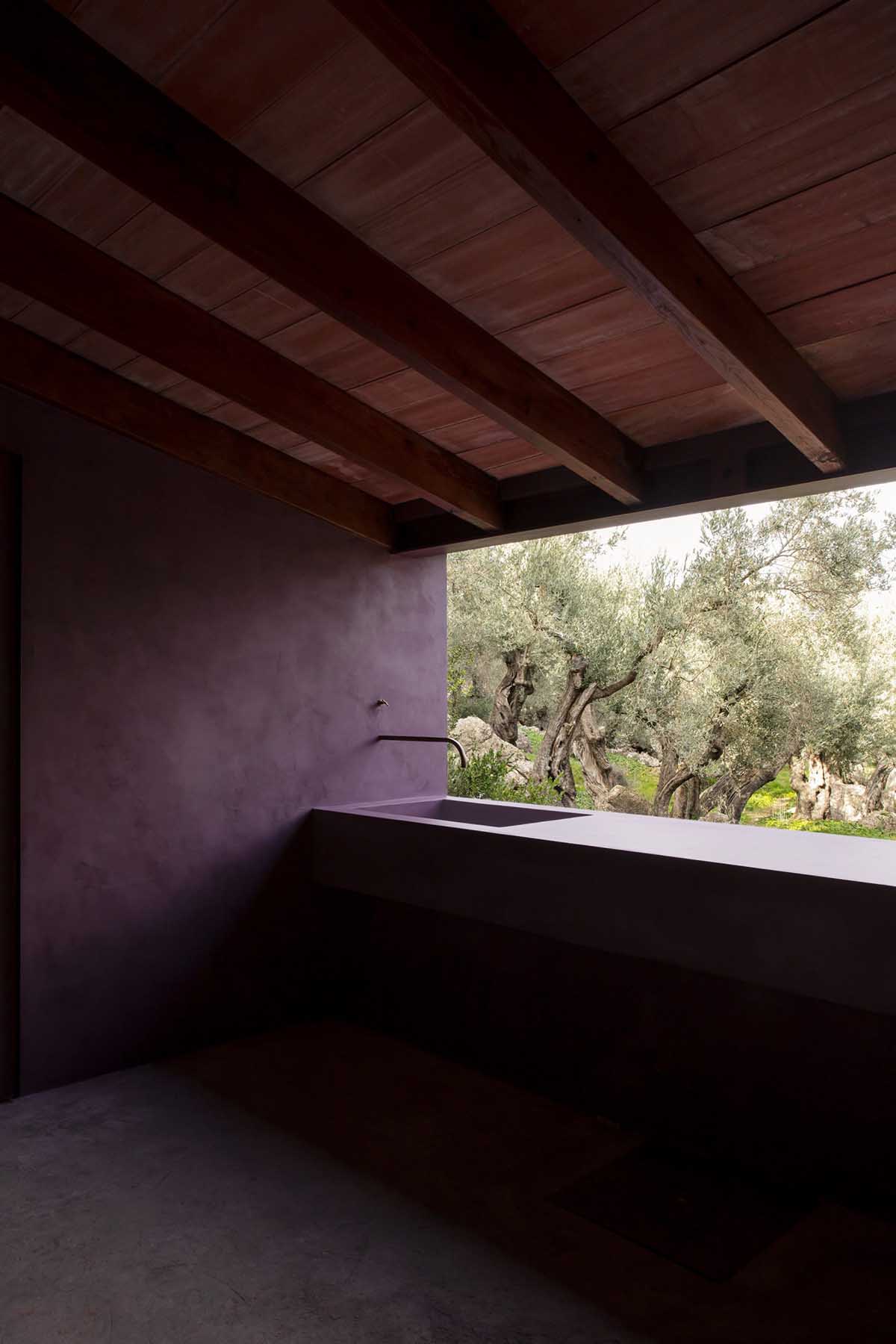 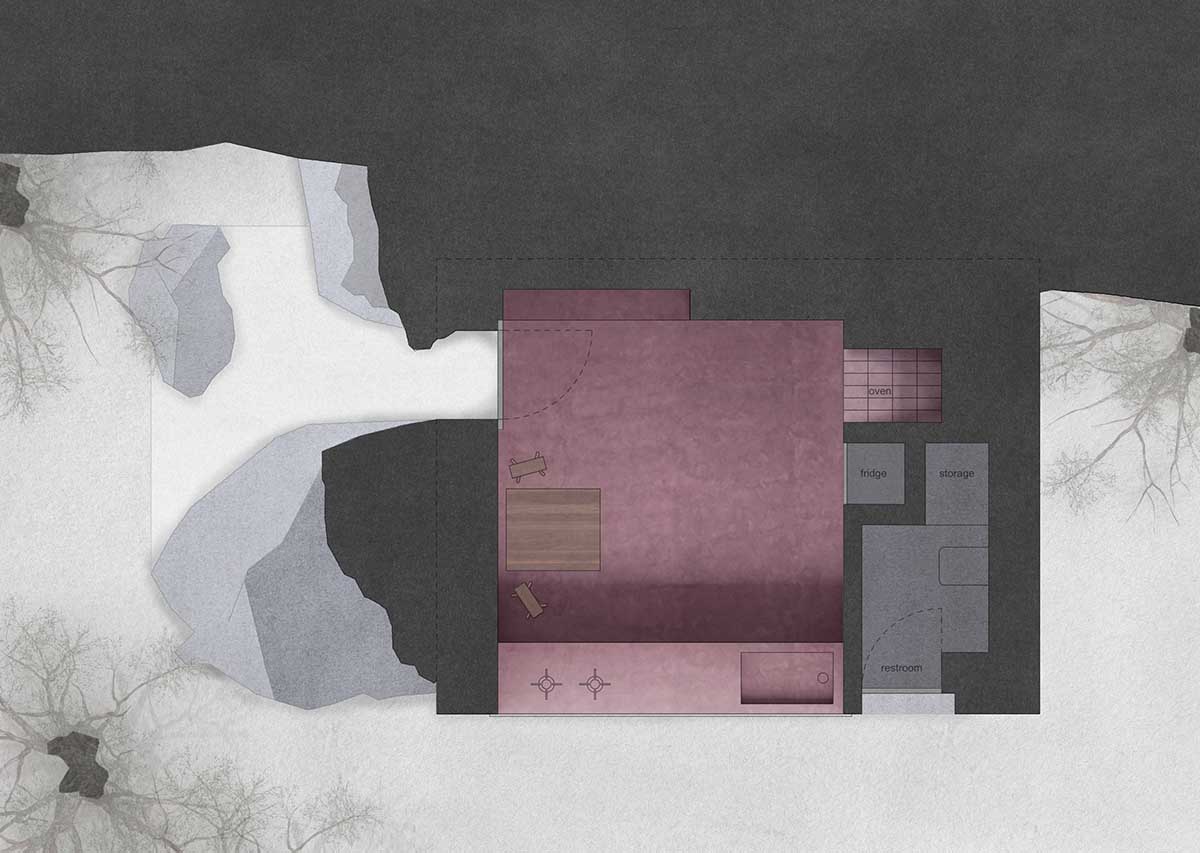 Mar Plus Ask was founded by architects Mar Vicens and Ask Anker Aistrup in 2015 in Berlin.

The office has a research-based approach, supported by their academic work and their build experience with materials and construction.

> via Mar Plus Ask