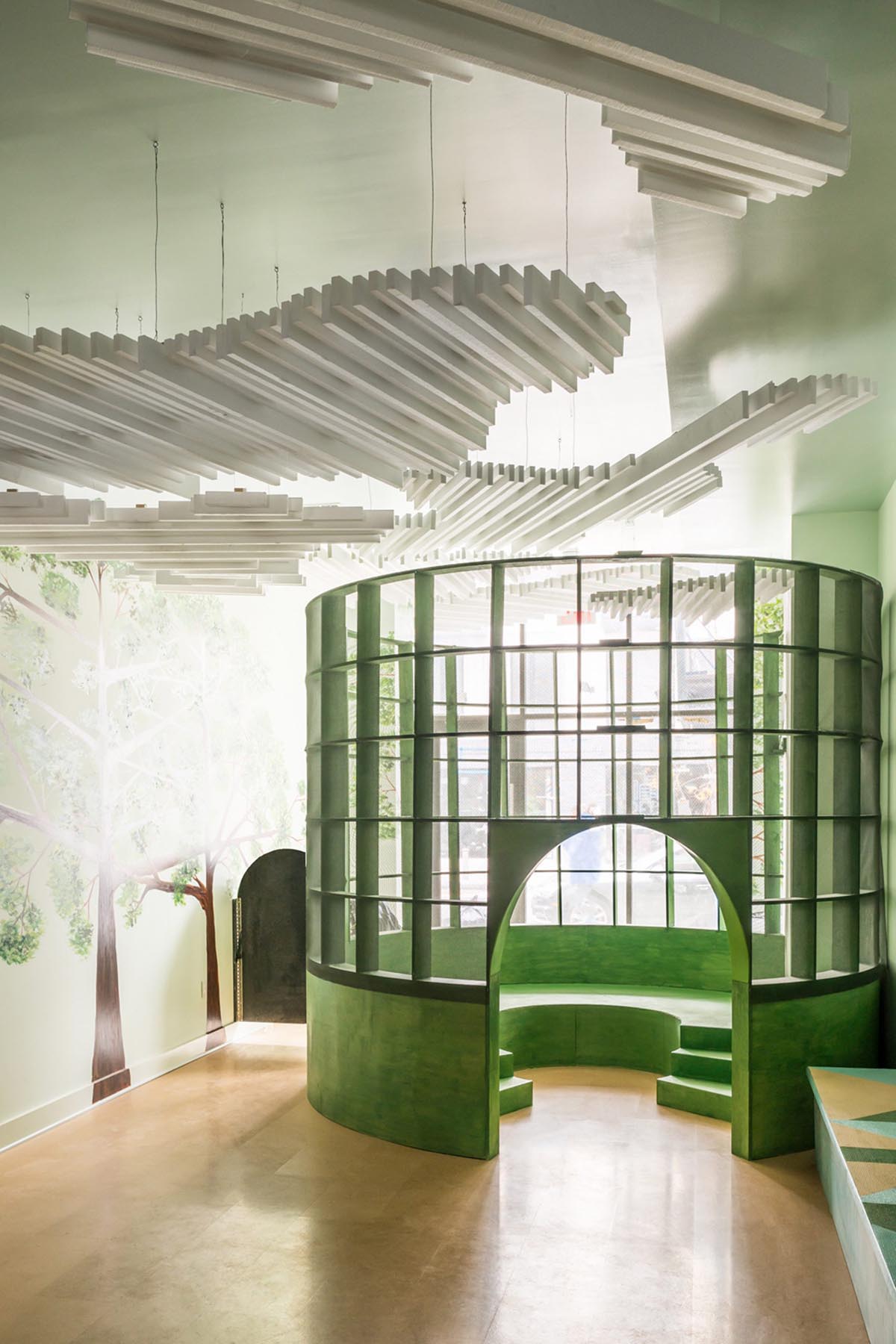 New York and Rome-based architecture studio Architensions has gently abstracted elements from the nature to create children's playground in this project located in Brooklyn, United States.

Named Children's Playspace, the project was designed for a Brooklyn-based wellness professional who has an expertise in yoga and childcare. The client desired an indoor environment for "creative, collective play for a small group of children."

The architects approached to the brief in creative way and reinterpreted natural elements inside by using a series of plywood structures and healthy materials that enhance different sensory effects derived from the landscapes. 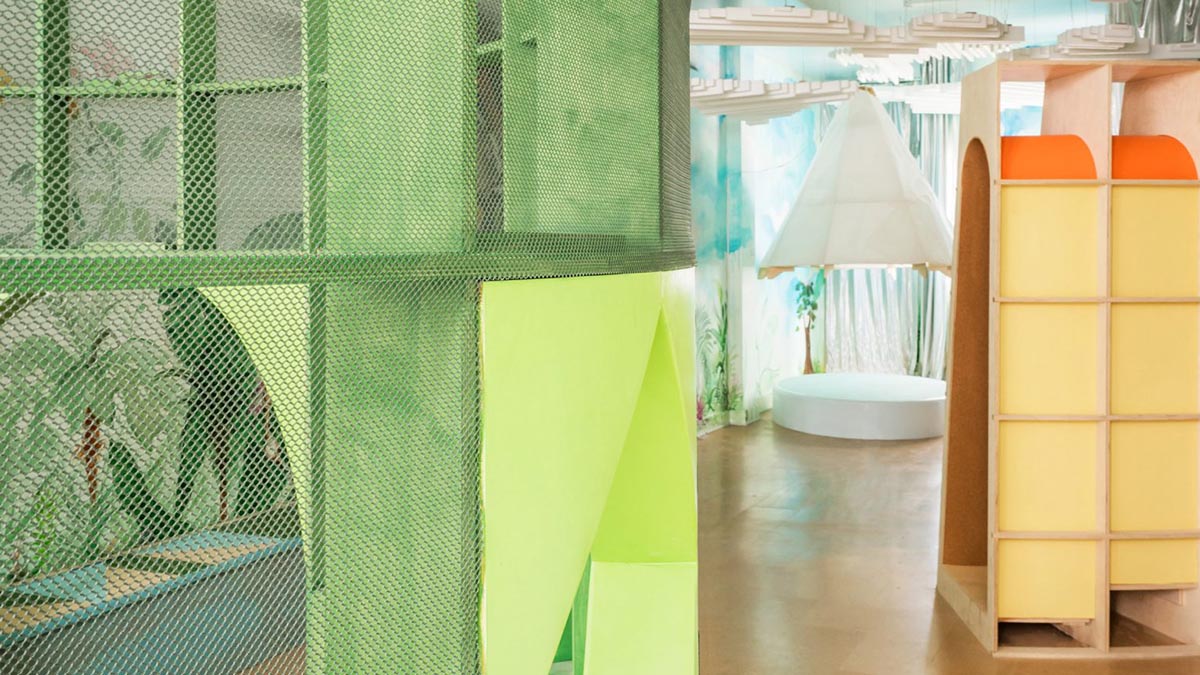 The architects used different types structure that remind nature, like The Treehouse (above in the picture), it reaches 2.4-metre height and allows children to sit underneath like making a feel of sitting under a tree.

The Treehouse has a circular base inside with small staircases and arched door. While children sitting inside, they are able to feel the leaves suspended from the ceiling.

"The space hinges on a series of plywood structures that playfully abstract elements of nature, recalling movement through woodland forts, dappled light streaming through trees, and the glow of the sun reflecting off of snow," said Architensions. 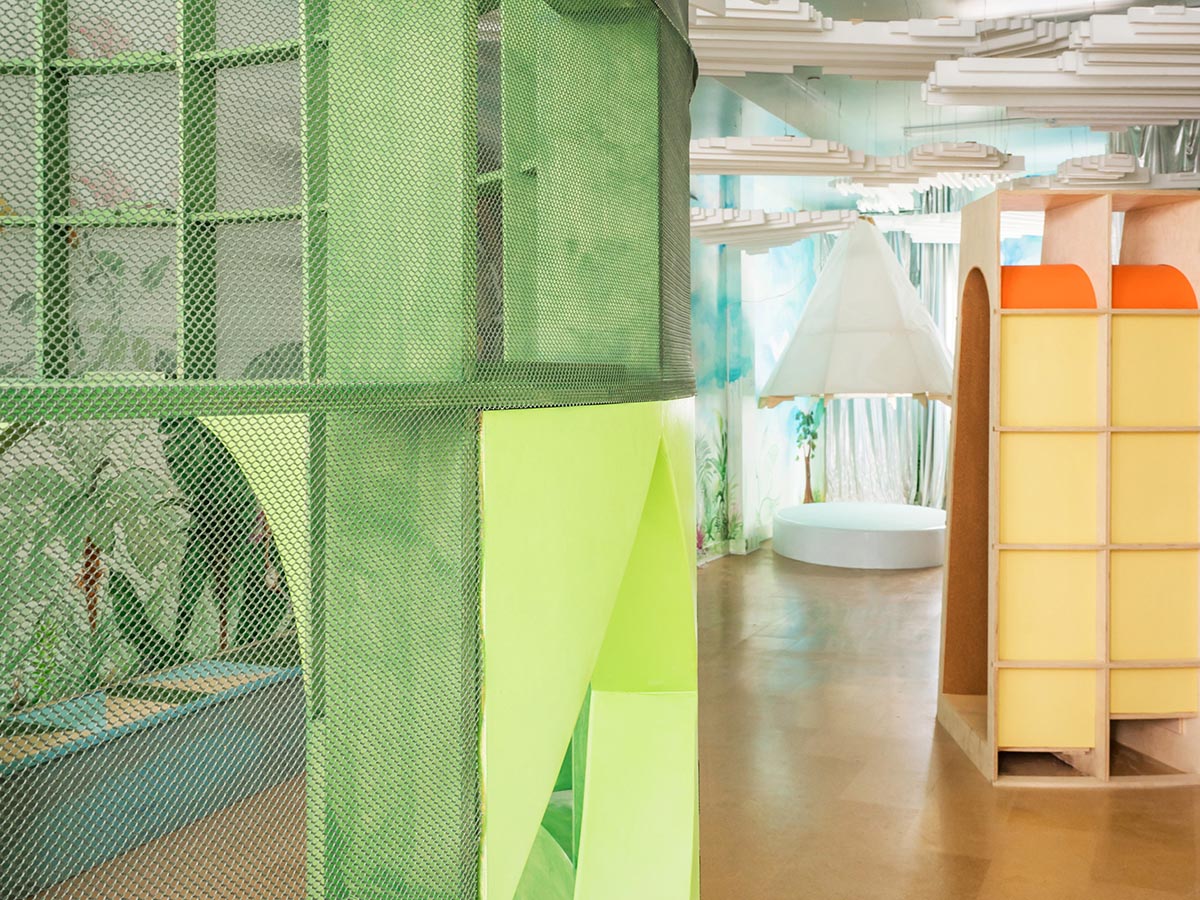 Architensions looked to the natural world to create the framework for space, as well as to influential precedents in playground design.

The studio's design process was rooted in the relationship between children’s experience and aesthetics.

"As designers, we had to challenge ourselves and ask a number of questions," said Alessandro Orsini, Architensions co-principal.

"How can the built environment relate to children’s imagination, cognitive development, and aesthetic appeal? Is it possible to merge aesthetics and function for a space that appeals to children?." 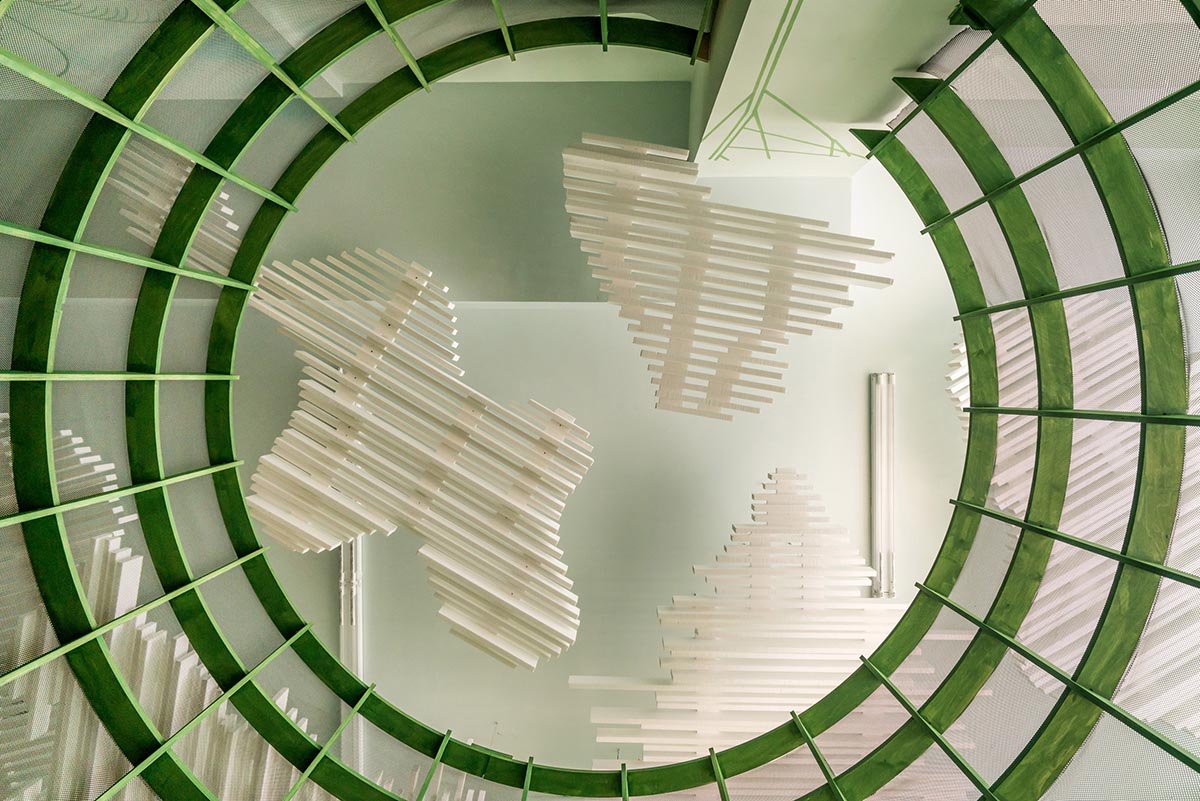 The organizing principle became experiential architecture, or a series of structures each producing different sensory effects that inspire both comfort and exploration in children.

"The indoor architecture became an internalized landscape of events aimed at simulating the change of season or the effect of the light through snow," said Nick Roseboro, Architensions co-principal.

"This environment allows them to assume different body postures, to create boundaries, and to manipulate and re-invent their surroundings."

The studio used materials which are easy to play and safe for children. Throughout the space, plywood is sanded and clear stained, and all paint is non-VOC natural stain. 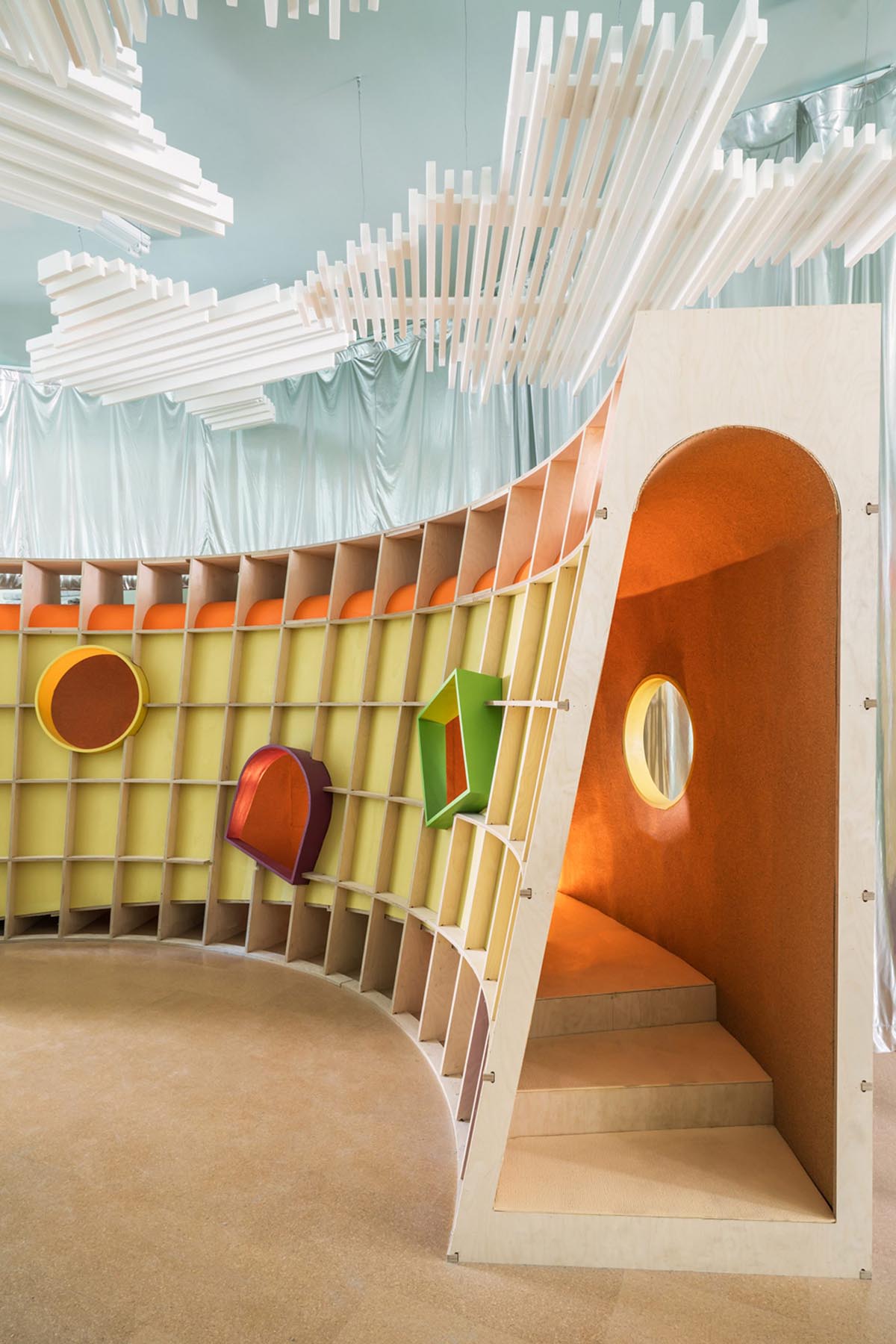 The studio designed three primary structures in the interior, each with a distinct geometry and color scheme.

A semicircular “Tunnel,” recalling Noguchi’s Contoured Playground, manipulates the topography by rising from the ground through a series of shallow steps.

Next to a large window offering natural light, a cylindrical, green environment measuring 10-feet- wide (3-metre)-by-8-feet-tall (2.4-metre) makes reference to a Treehouse, where children can climb a set of steps to observe the space through green fabric mesh that simulates the effect of the leaves.

On the left side of the space, an enclosed form covered in semi-translucent washi paper hangs from the ceiling, which reaches nearly 12 feet. 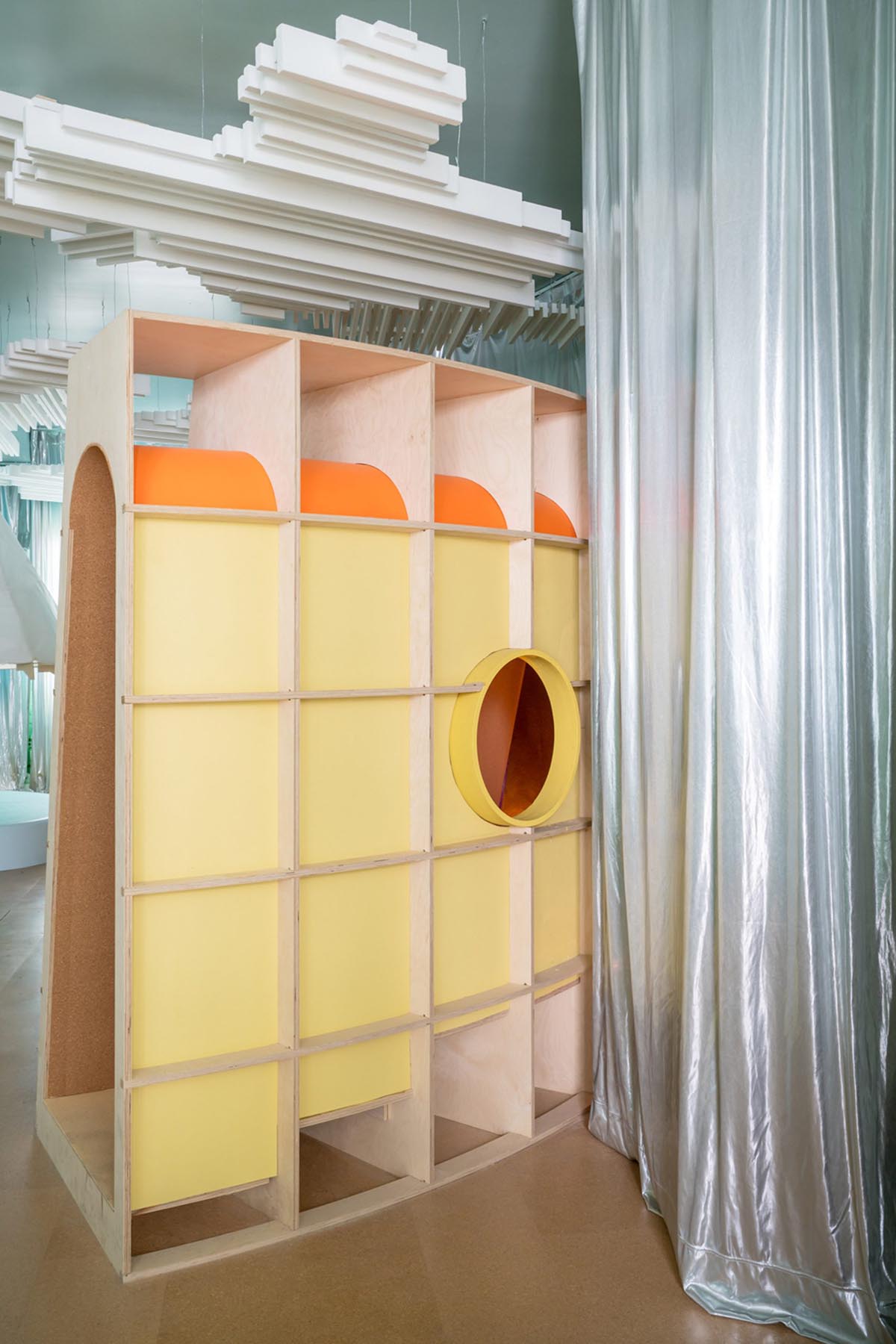 Its white, cone-like shape alludes to an igloo; from within, children experience a peculiar light condition resembling the effect of scintillating snow.

"The goal is to iconize the forms to make them recognizable and welcoming for the children," explained Orsini. "And, at the same time, to create inspiring spaces where they will always feel in control of their environments." 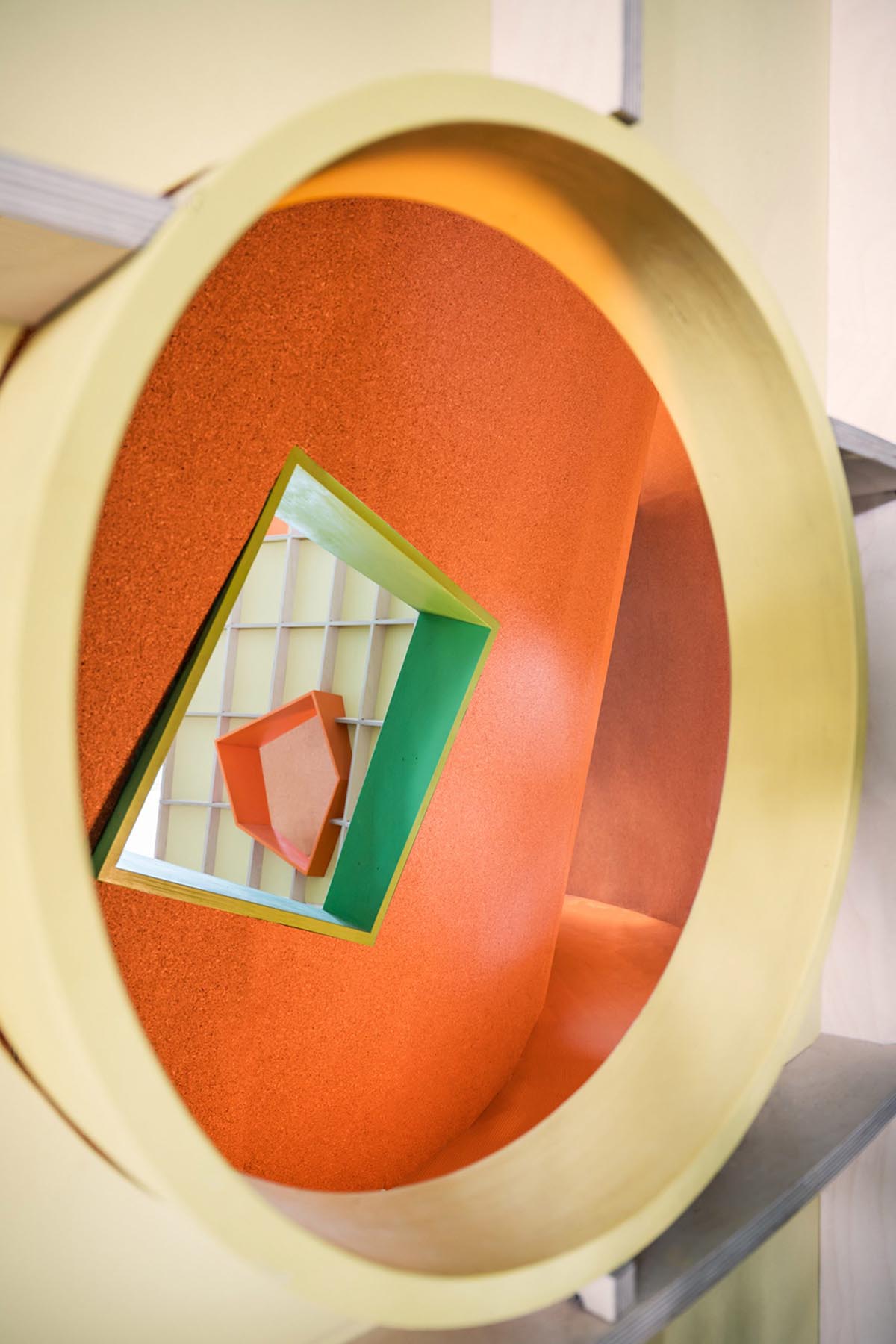 Walls of the room are covered on two sides with fabric with a liquid metal effect, alluding to water or sky, while another wall features a fresco of painted trees.

As a finishing touch, the designers suspended four cloud-like forms made from foam slats painted bright white above the three primary structures, while the floor is clad in a soft, tan rubber recalling a forest floor coated in fallen pine needles. 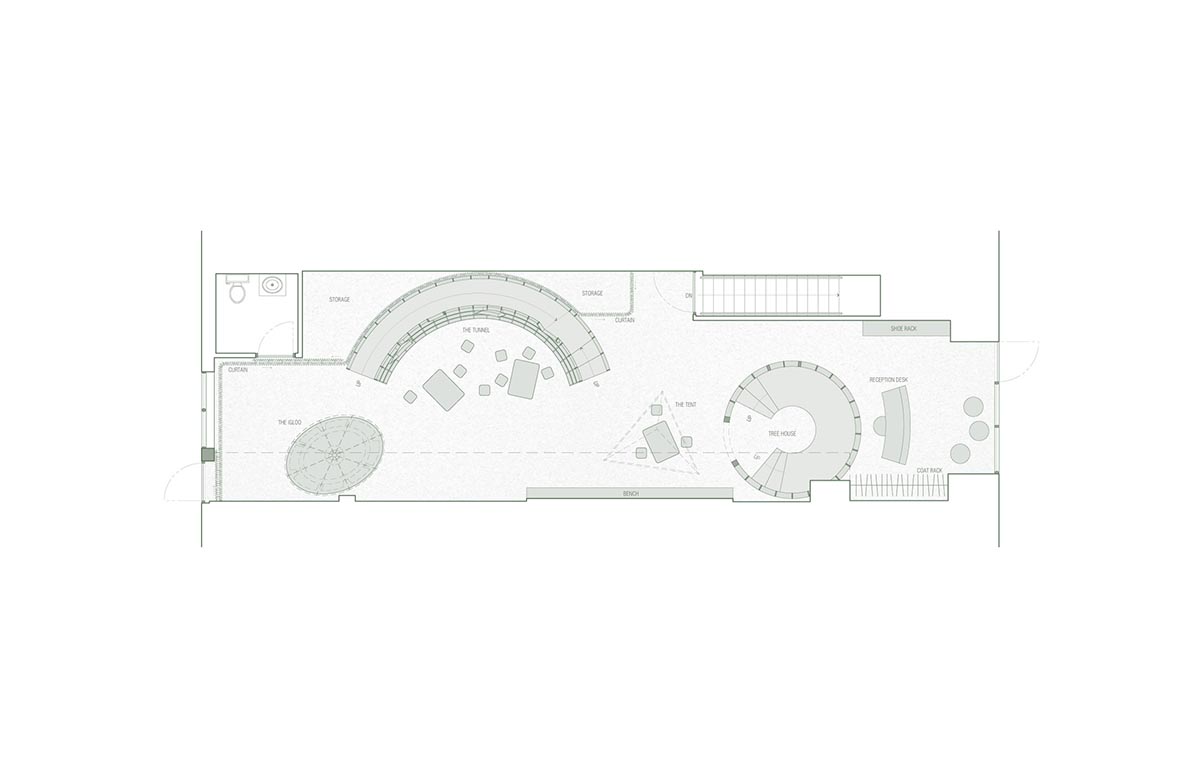 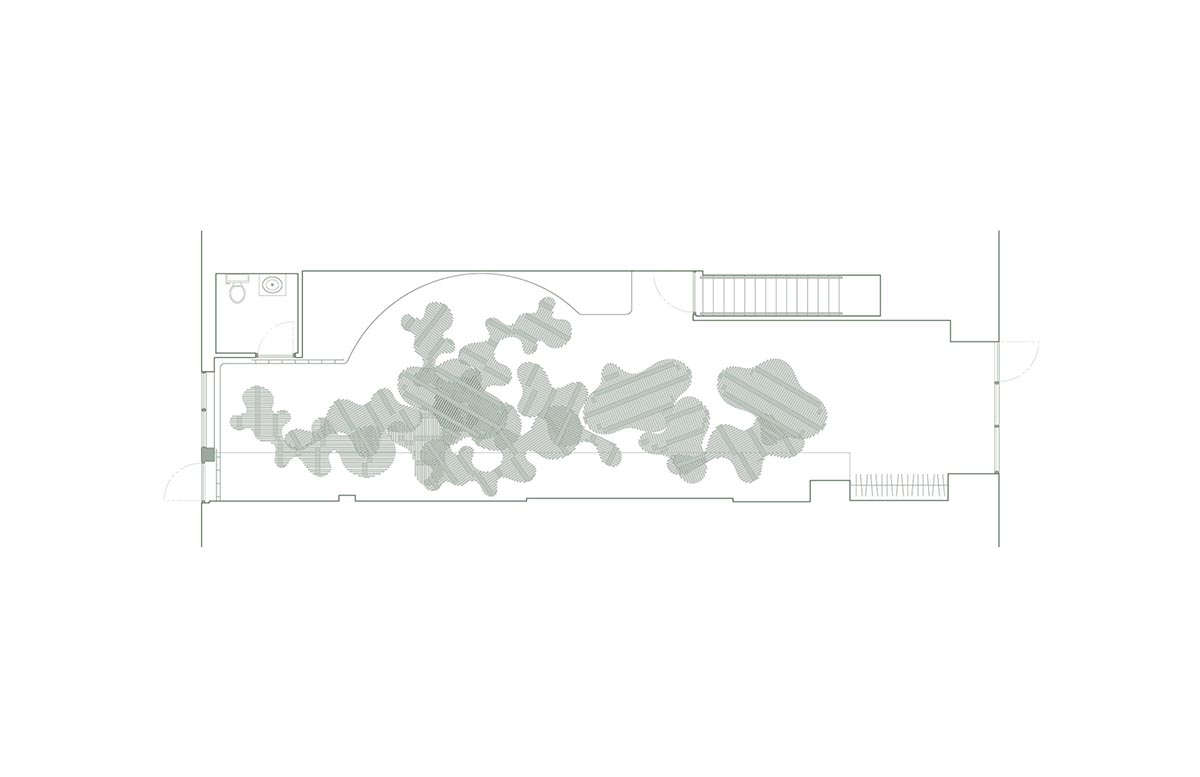 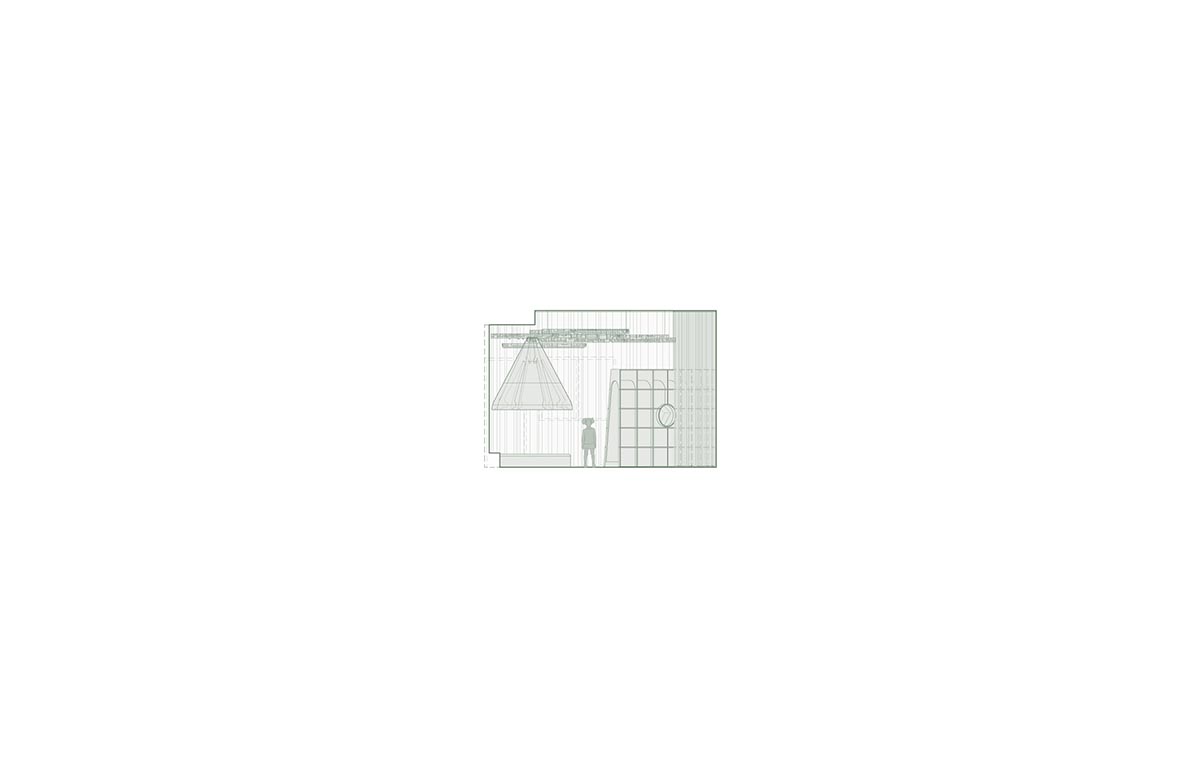 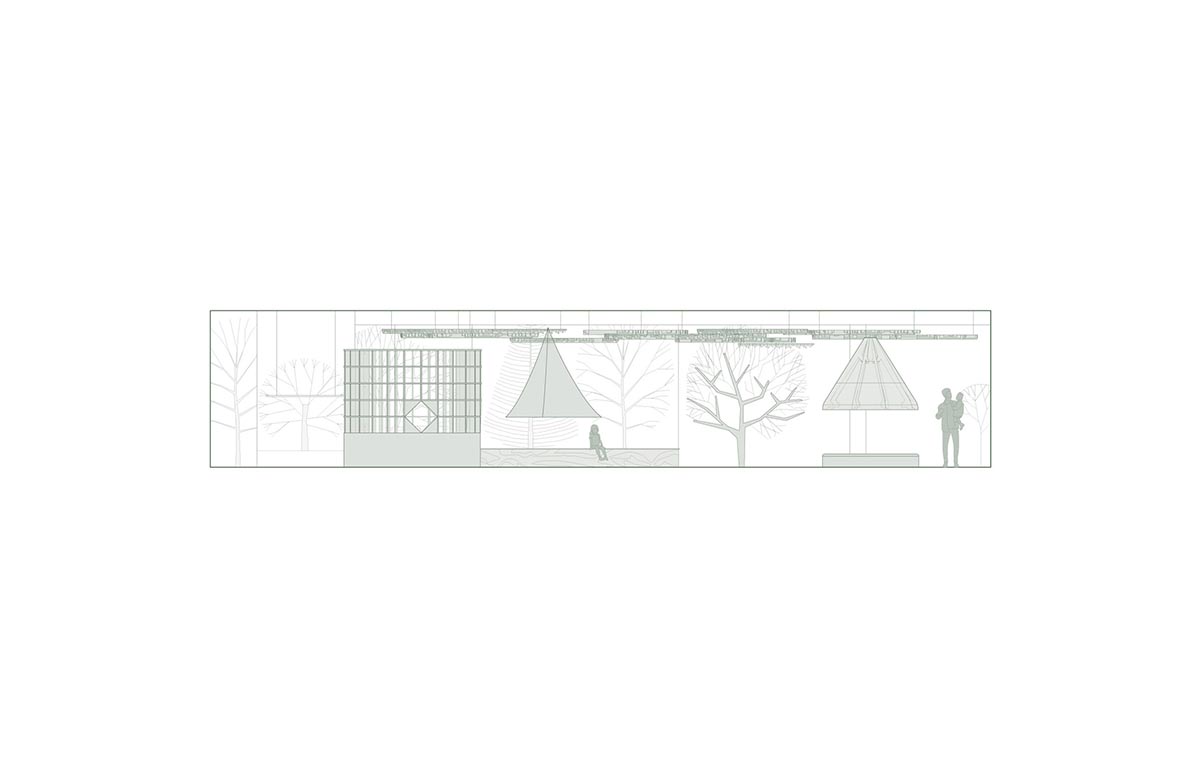 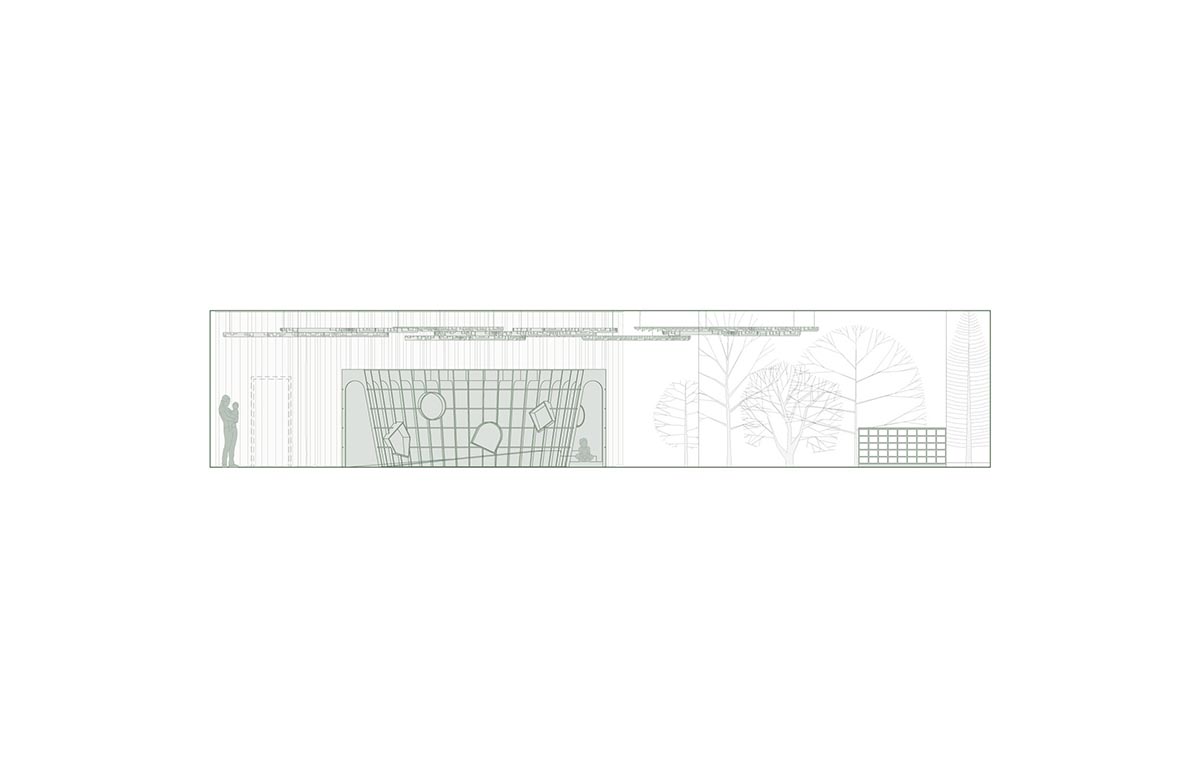 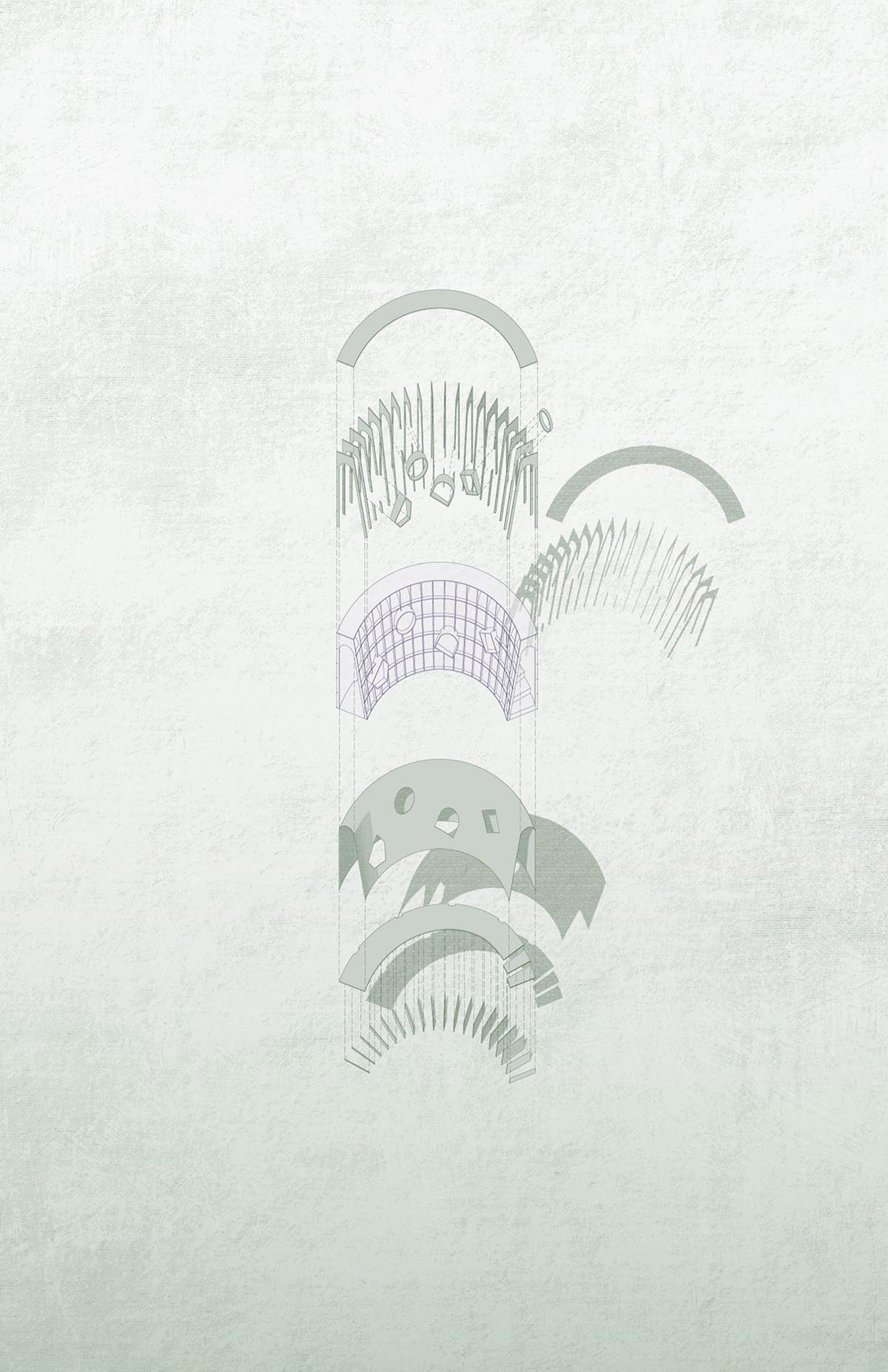