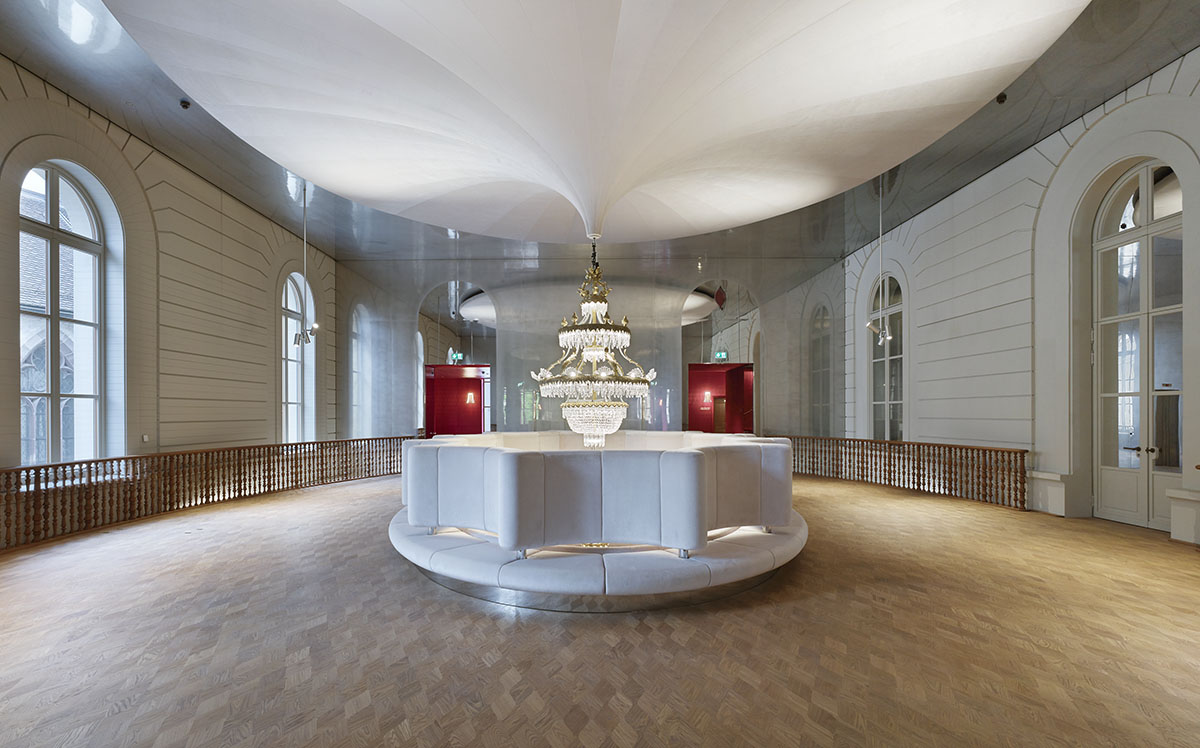 Named Stadtcasino Basel, the project oversees the restoration, preservation and extension of the Stehlin Musiksaal built in 1876, the building is one of the oldest concert halls in Europe and internationally known for its acoustics. The building has been renovated and complemented with a new extension. 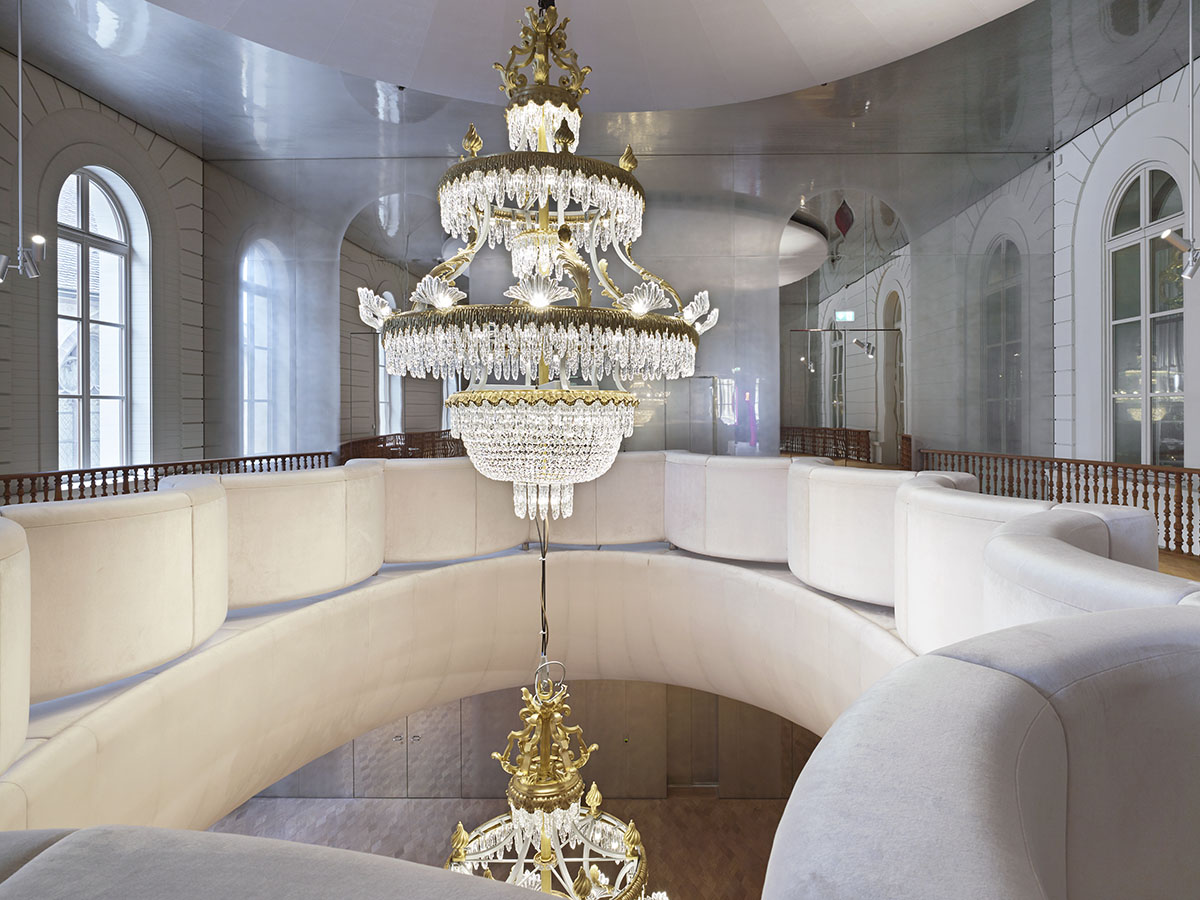 On the plans, Herzog de & Meuron proposed a viable solution to treat the Musiksaal as an autonomous building, uncoupled from the 1939 Casino after conducted a comprehensive urban study in 2012.

In 1939, the old casino was demolished to make way for a new one, designed by architects Kehlstadt & Brodtbeck, and when the old Stadttheater was torn down in 1975, the resulting gap created a plaza for the new Theater, thus definitively heralding the end of the former Cultural Mile. Of the original buildings, only the Kunsthalle, the Skulpturenhalle, and the Musiksaal have survived.

The new extension plans grow out of the old building "as if it had always been there, generating space on several levels to accommodate foyers, bars, rehearsal rooms, dressing rooms and service facilities required for the contemporary needs of the Musiksaal," said Herzog & de Meuron in a statement. 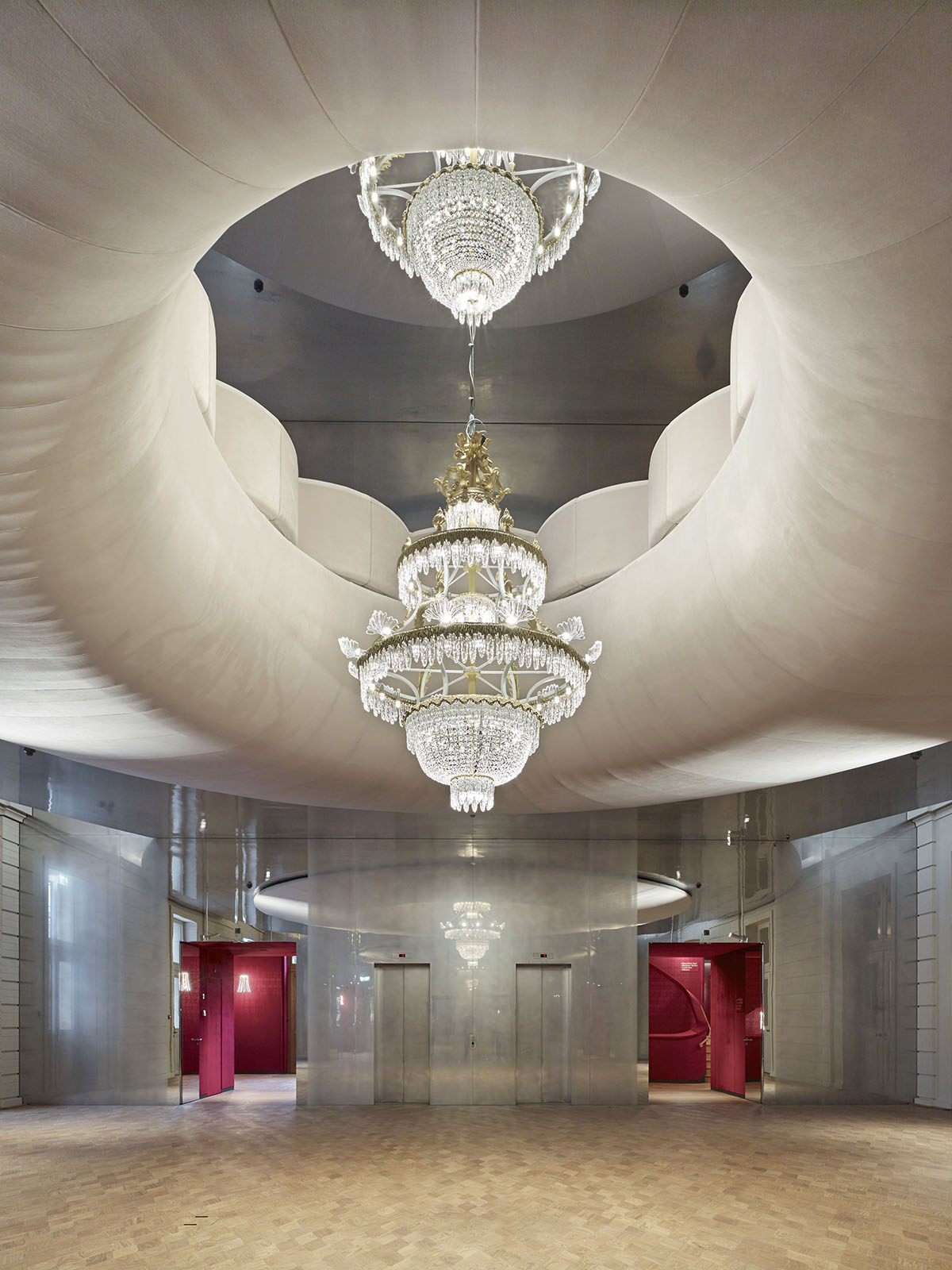 Herzog & de Meuron explored a number of possibilities and variations for generating more space to house the additional facilities required for the Musiksaal.

The studio focused on the area between the Musiksaal and the Barfüsserkirche, where the cloisters had been built in the Middle Ages. The area had consequently been cleared for architectural modifications by the Department of Historic Preservation.

"Initially, we proposed extensions to the building between the Barfüsserkirche and the Musiksaal in analogy to the former cloisters but soon jettisoned the idea on urban, architectural, and operational grounds," the architects said.

The Stehlin Musiksaal was brilliantly conceived as a palazzo and all attempts to add on to the building looked like ridiculous patchwork. Similar to the annex of 1939, the extension facing the church would have been perceived as being behind the building and thus inferior to the façade facing Steinenberg.

The only viable solution was to treat the Musiksaal as an autonomous building, uncoupled from the 1939 Casino. 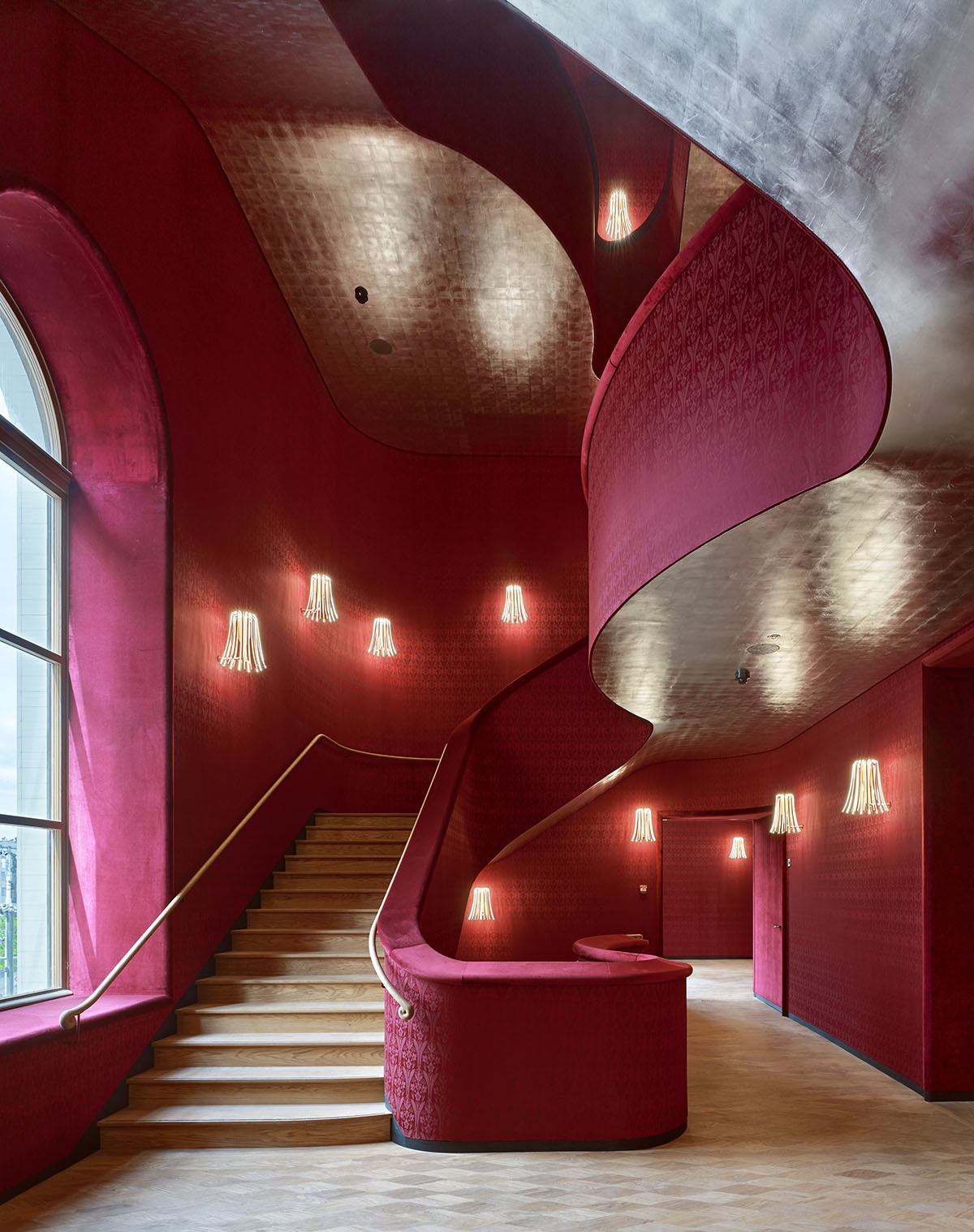 As an independent building, the Musiksaal obviously had to be bigger than the existing core building of 1876. It would have to grow out of the old building as if it had always been there. That is why it was so important to design the addition, accommodating foyers, service facilities, rehearsal rooms and dressing rooms, so that it appears, at least at first sight, to be in the same neo-Baroque architectural tradition.

The studio's design is based on the rear façade of Stehlin’s building, which had long been largely hidden behind the old extensions. With digital technologies the architects scanned the façade and we reconstructed it to original scale. 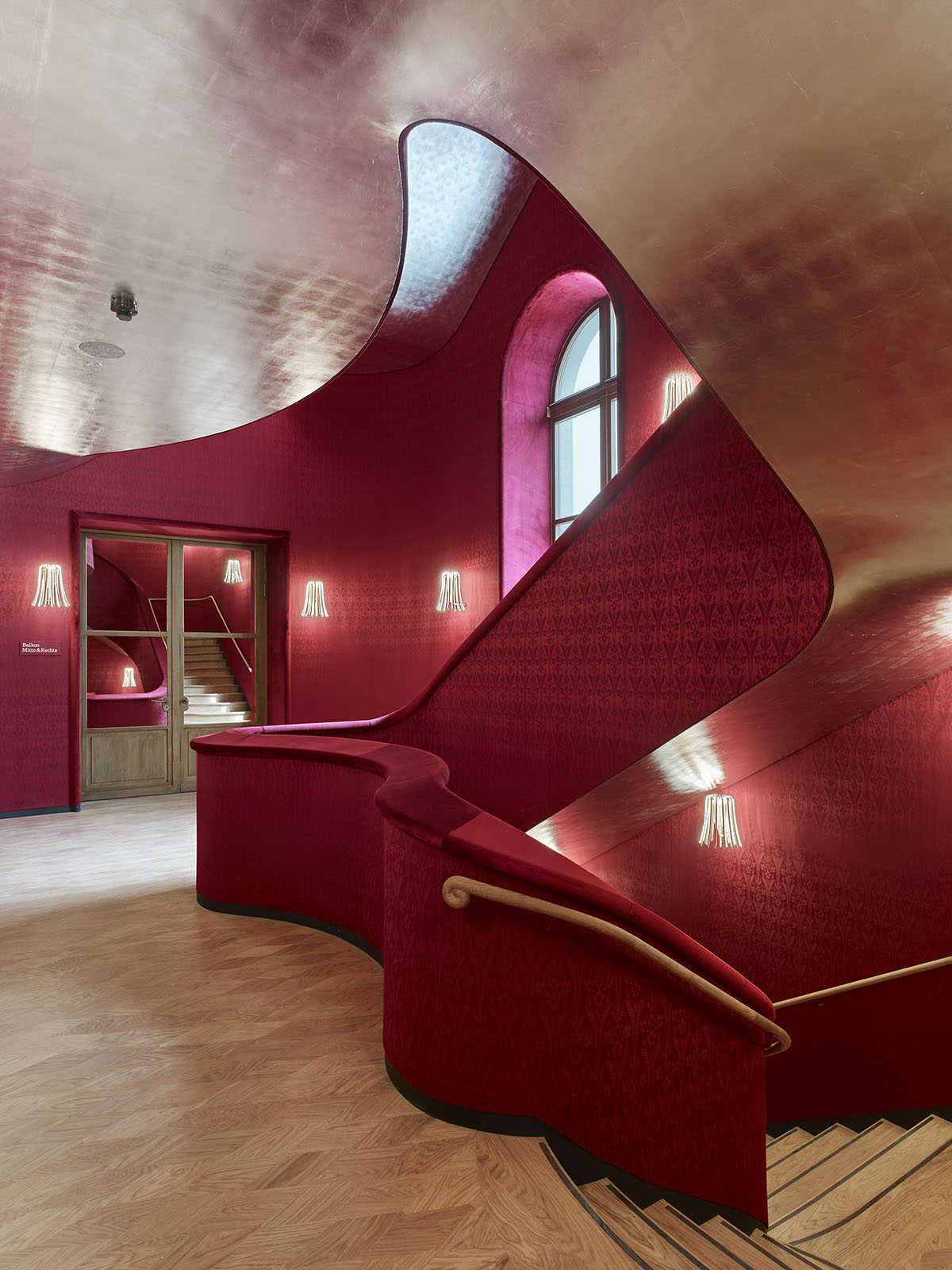 The solid masonry of the historical façade has given way to a façade of insulated, reinforced concrete with rear- ventilated cladding in keeping with contemporary building technology and climate control.

"We decided that wood would be the most suitable cladding and modified the geometry of the original façade just slightly to meet the structural requirements of that material," added the office. 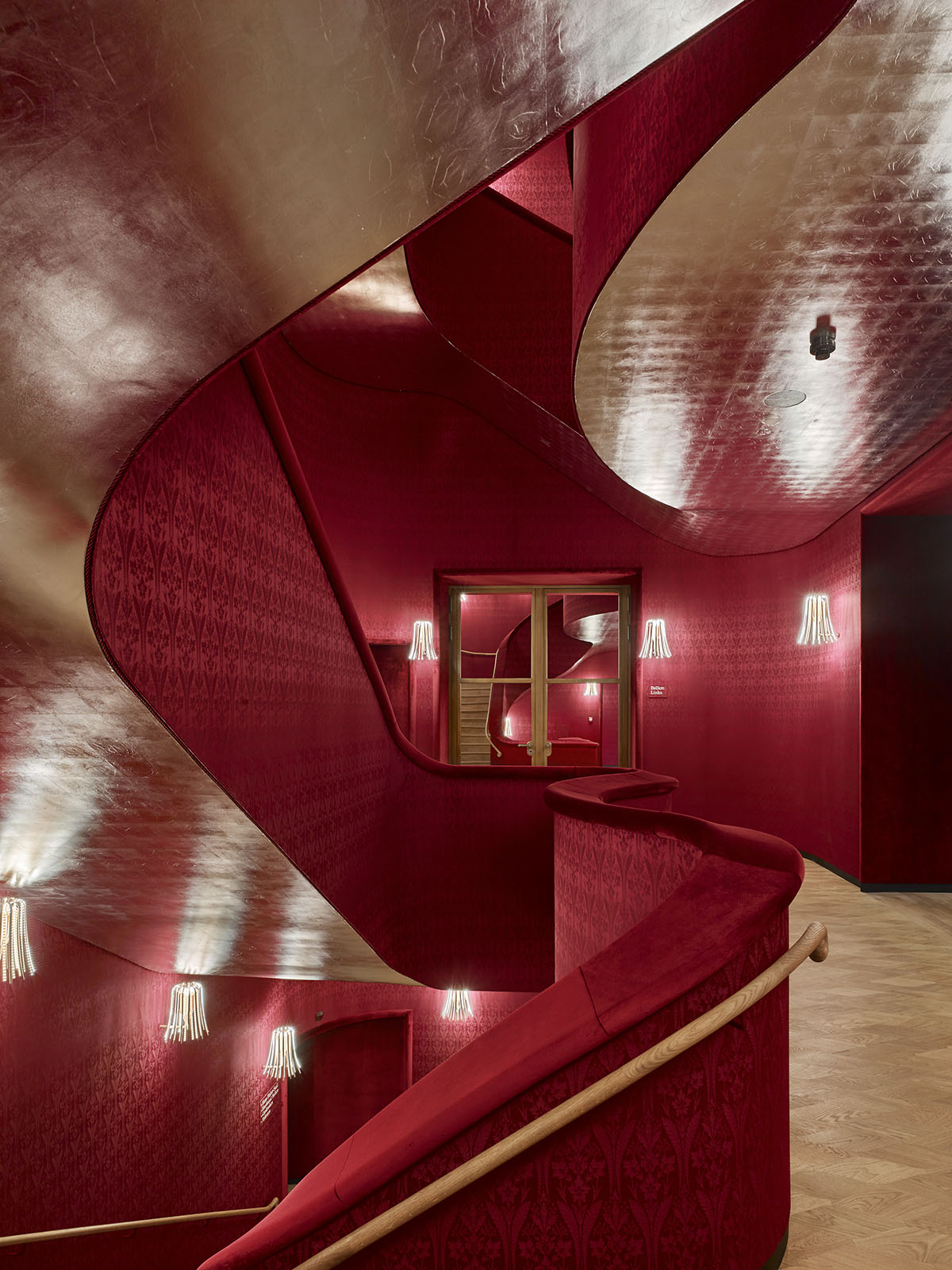 Separating the operations of the concert hall and the Stadtcasino also meant demolishing the former entrance area with its staircase. This allowed for a direct connection between Steinenberg and Barfüsserplatz, where carriages used to pull up, prior to the demolition of the Berri building in 1938 and the construction of the new Stadtcasino in 1939.

Thus, the Musiksaal is now oriented both toward the former Steinenberg Cultural Mile and Barfüsserplatz; it is a clear-cut presence on Barfüsserplatz, sharing the space on equal footing with the imposing Barfüsserkirche. The area between the Church and the Musiksaal, once merely perceived as kind of rear courtyard, has become a new public space. 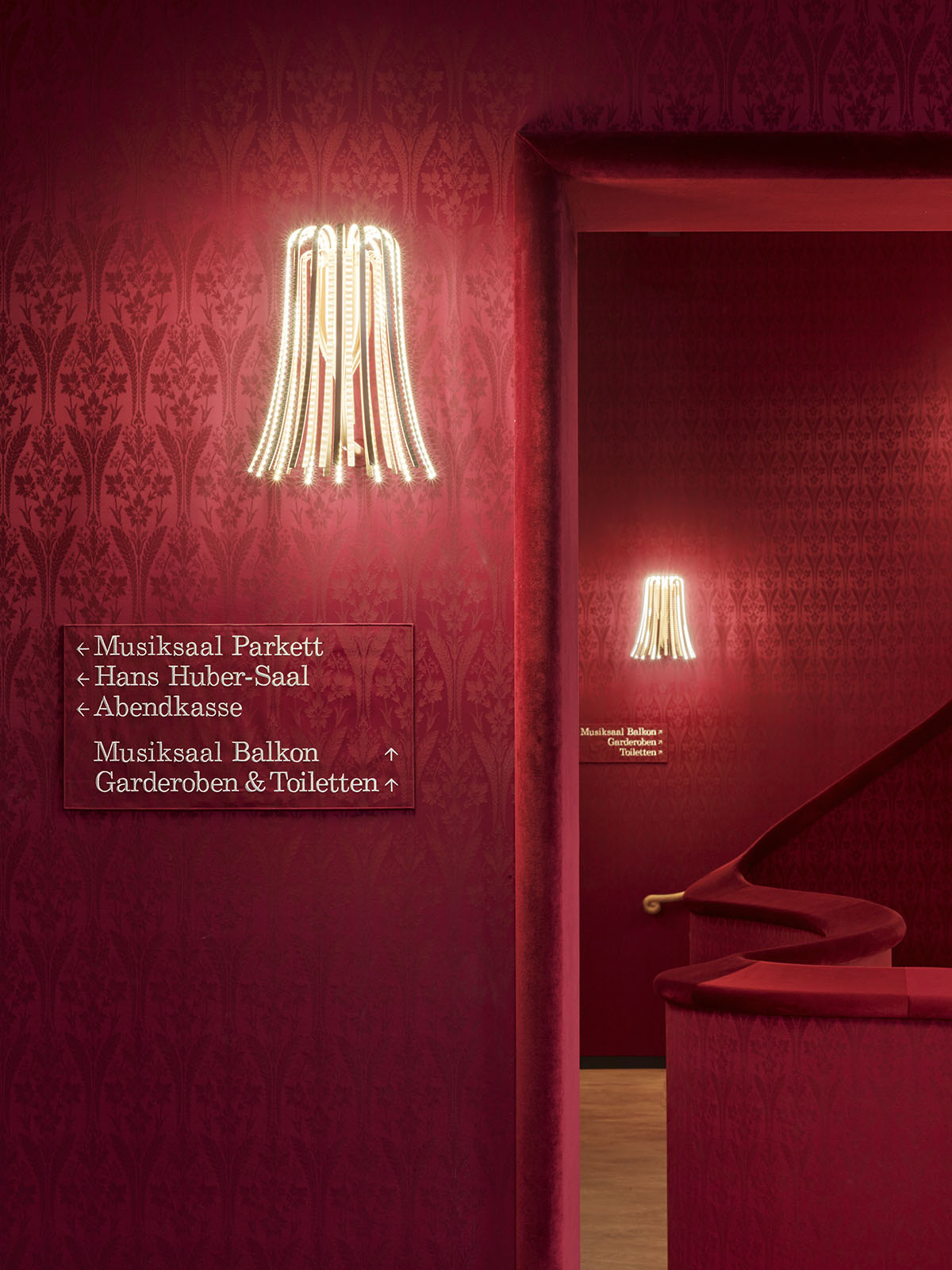 This volumetric recovery of urban space draws attention to other weaknesses. The 1939 Casino has always turned its back to the square, with a rear façade that looks like an apartment building.

Furthermore, the 1980s design of Barfüsserplatz includes a tram stop that obstructs the square. The situation undoubtedly needs further consideration, especially as Barfüsserplatz is one of Basel’s most important public spaces. The Musiksaal has been significantly modified several times since it was built in 1876, first in 1905 in conjunction with the Hans Huber Hall built by Fritz Stehlin, at which time an organ was built into the hall, stucco decoration applied to the ceiling, the busts of musicians placed against the walls, and the color scheme revamped. The second major refurbishment followed in 1939, when the old Casino was torn down to make room for the current building by architects Kehlstadt & Brodtbeck.

A significant increase in the incline of the rear balcony provided access from the balcony to the newly erected building in between. Further adjustments in the years that followed include closing off the skylight and the windows, replacing the historical seating, redesigning the historical chandeliers, replacing the original parquet, and introducing an entirely new color scheme. 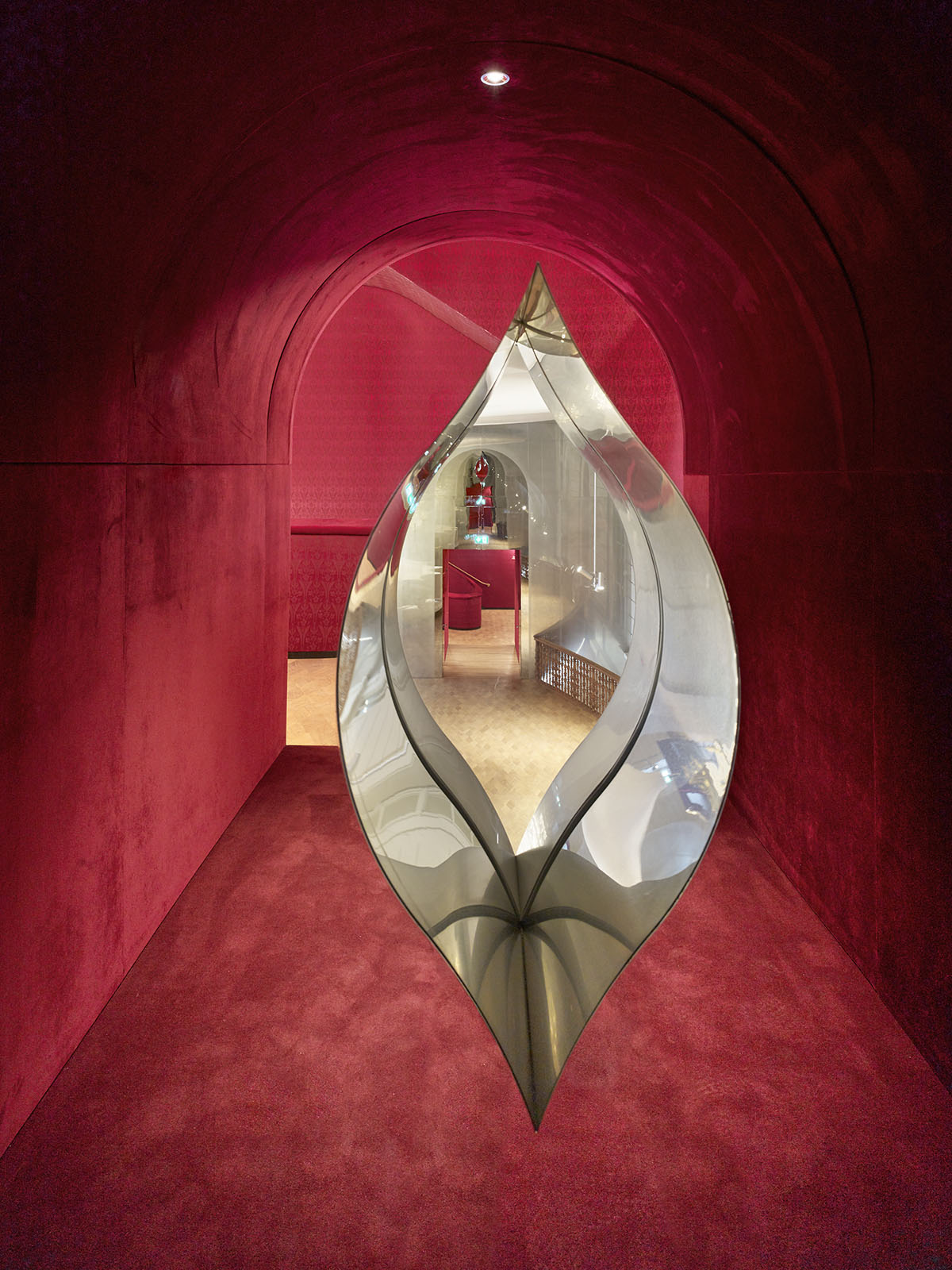 The current restoration of the concert hall has been carried out in close collaboration with the Cantonal Department of Cultural Heritage. The aim of restoring the building to its original state at the time it was first renovated in 1905 went hand-in-hand with the top priority of preserving the hall’s acoustic properties.

"We opened up the skylight and the windows again, re-created the original seating, reduced the incline of the balcony, laid a duplicate of the original parquet flooring, and restored the color scheme of 1905." The enlargement of the overall volume directly adjoining the concert hall generates space on several levels to accommodate foyers and bars as well as rehearsal rooms, dressing rooms and service facilities. The Hans Huber Saal will continue to host chamber music and is now accessed directly from the new foyers.

The new foyers flanking the concert hall are arranged on two levels, accessing the parquet and the balcony.

"We have exposed the façade facing the concert hall, mirroring it as a new outside wall. For the end walls, however, they use mirrors, a popular element of the 19th-century, making the hall more spacious in combination with the mirrored ceiling." The corners of the upper foyer are detached from the side walls, so that it seems to be a floating, elliptical panel. The two levels of the foyer, with a central hole, are thus perceived as a single space.

Outside, Herzog & de Meuron focused on simulation in designing the extension of the Stadtcasino, while inside we celebrated the stylistic elements of the 19th-century by heightening the artificiality of form, material, and color. 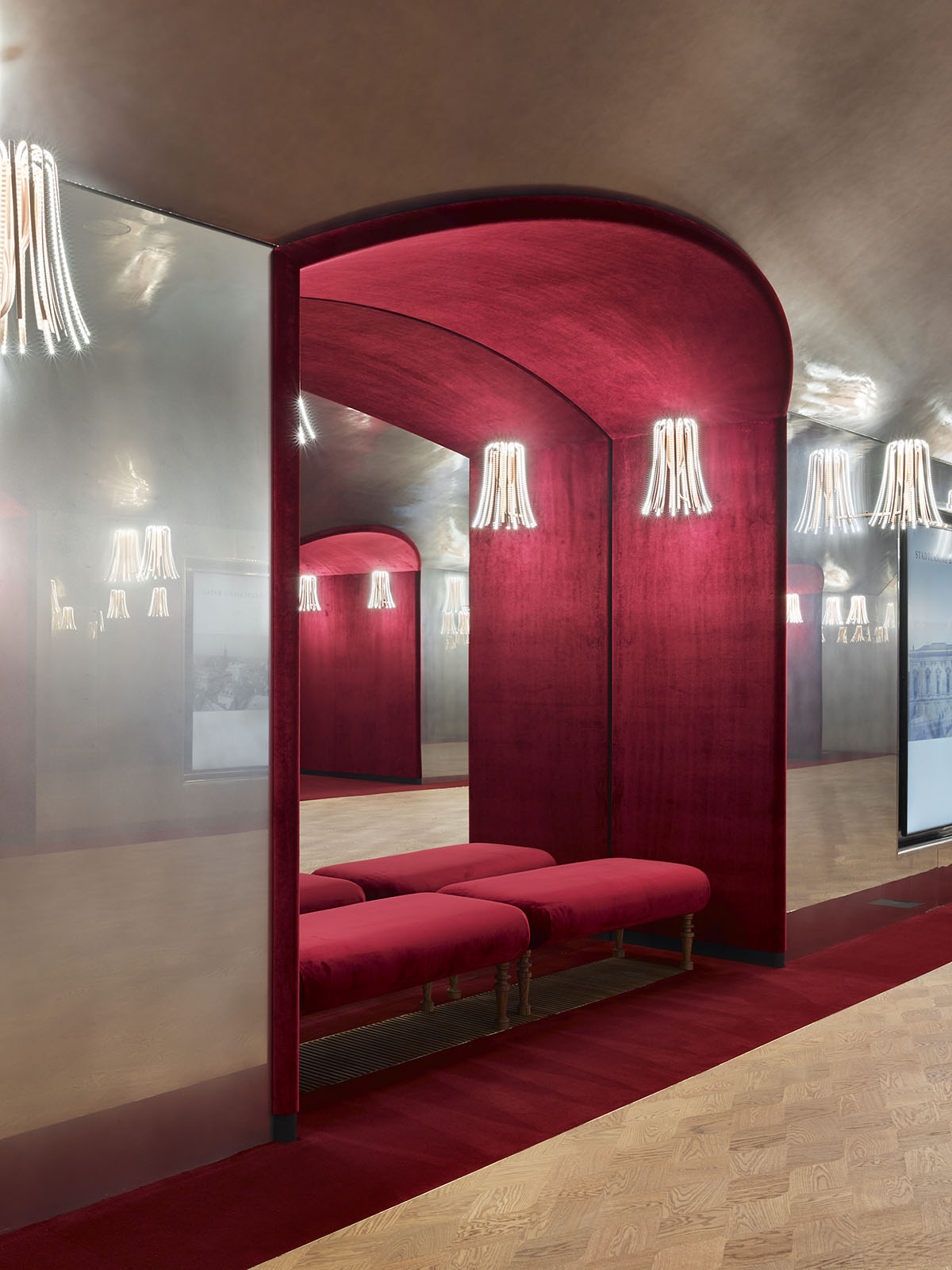 Despite the urban constraints on the extension of the Stadtcasino, the architects wanted to provide as much space as possible for audiences. Therefore, in addition to the foyers, we added loggia-like recesses to the expansive staircases, where people can linger during intermissions.

The studio had the original brocade wallpaper reproduced by the Manufacture Prelle in Lyon. Founded in 1752, the company had already woven these wallpapers for the Opéra Garnier the year before the concert hall opened in 1876. 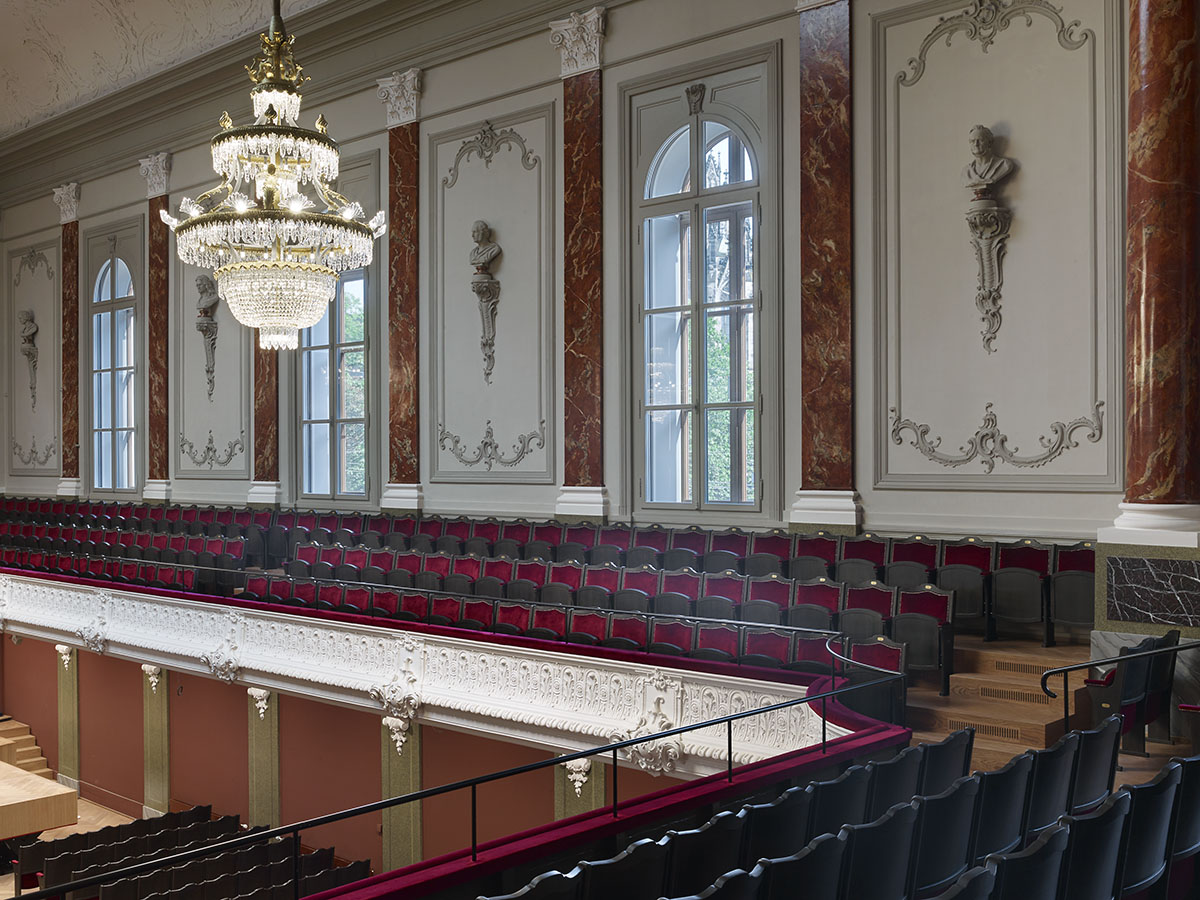 "We worked out a custom-made design for the new parquet of the Casino. The lens-shaped geometry of the pattern echoes the wallpaper, while the parquetry is laid out left and right, following the grain of the wood in reference to the historical herringbone parquet of the concert hall," added Herzog & de Meuron.

"Taking inspiration from the historical crystal chandeliers, we designed the “Parrucca” luminaire—modern LED lighting to line the staircases in the casino. The play of the light is multiplied by the silver of the hammered metal on the ceilings, which artificially heightens the room." 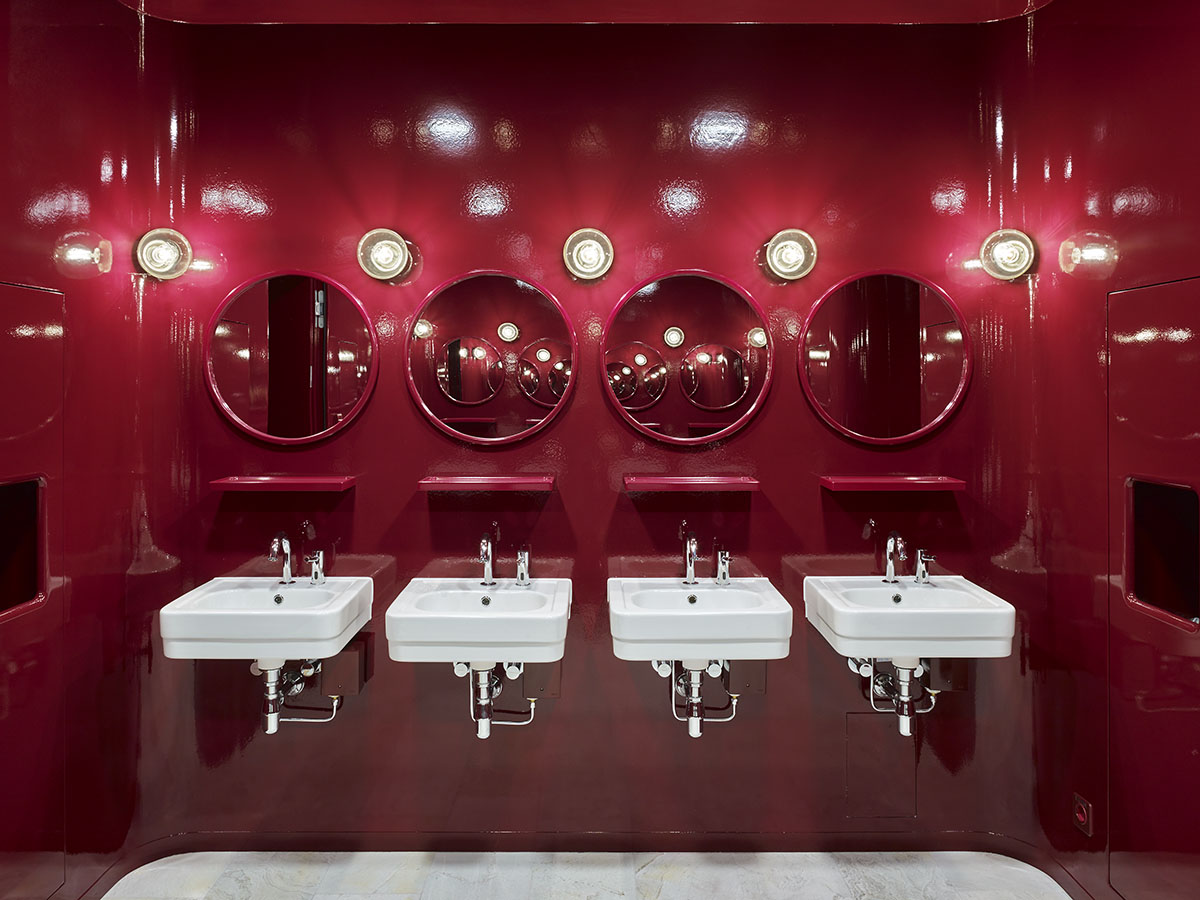 The Hans Huber Saal, the Rehearsal Rooms and the Dressing Rooms

Fritz Stehlin built the Hans Huber Saal for chamber music in 1905 to complement the concert hall. It has been largely restored to its original state in cooperation with the Department of Cultural Heritage.

The musicians’ foyer and the dressing rooms built along with the chamber music hall have been similarly restored. In addition to returning to the original color scheme, the studio referred to historical documents in order to reconstruct the paneling, windows, and doors that had been replaced in later renovations. 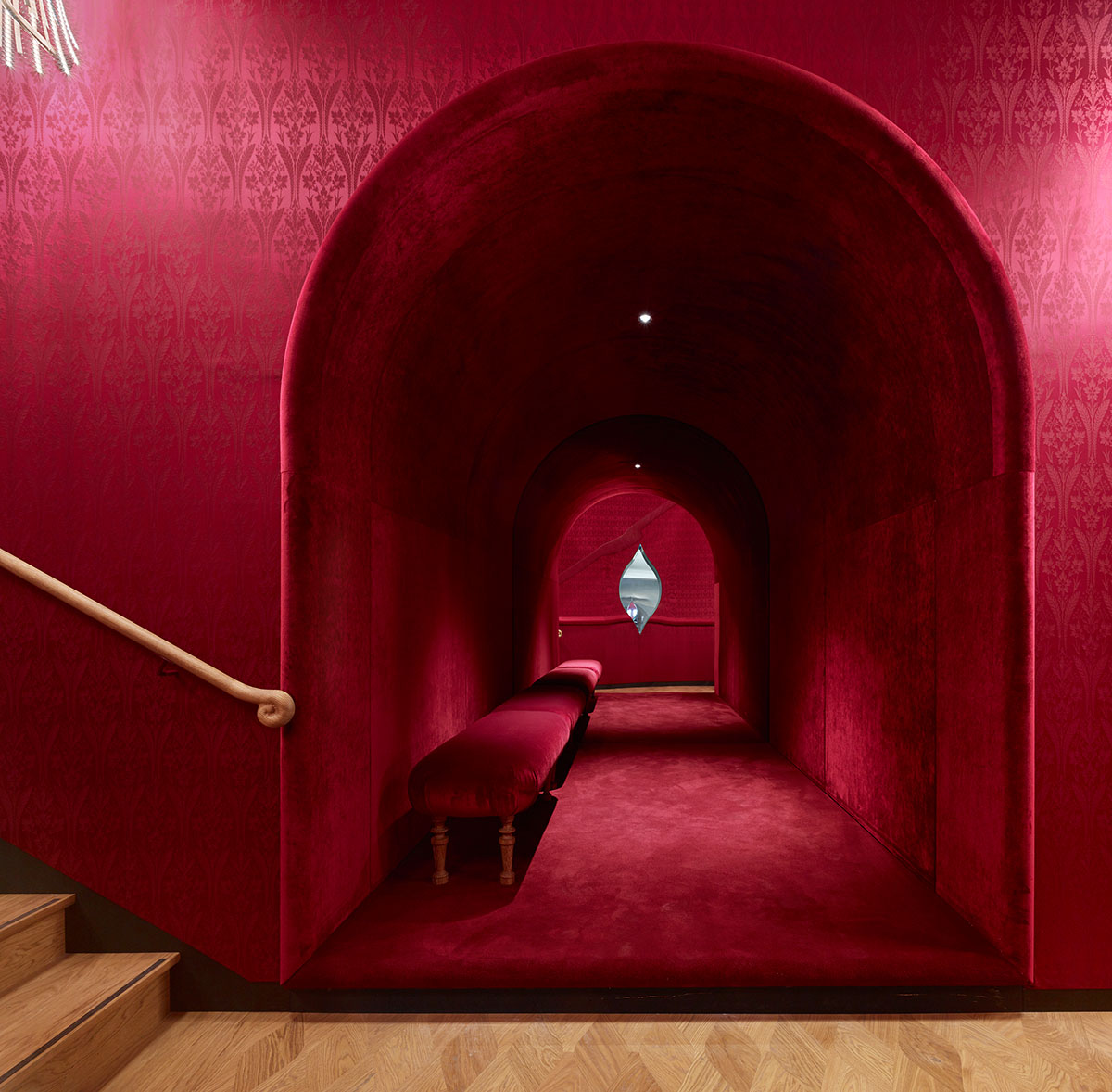 The existing dressing rooms of the Hans Huber Saal have been supplemented by new rooms on the top floor of the extension for the casino society.

There are also three dormer windows that afford new views of Barfüsserplatz and the Barfüsserkircheand, on the other side, of the historical roof of the concert hall, thanks to the newly created courtyard. 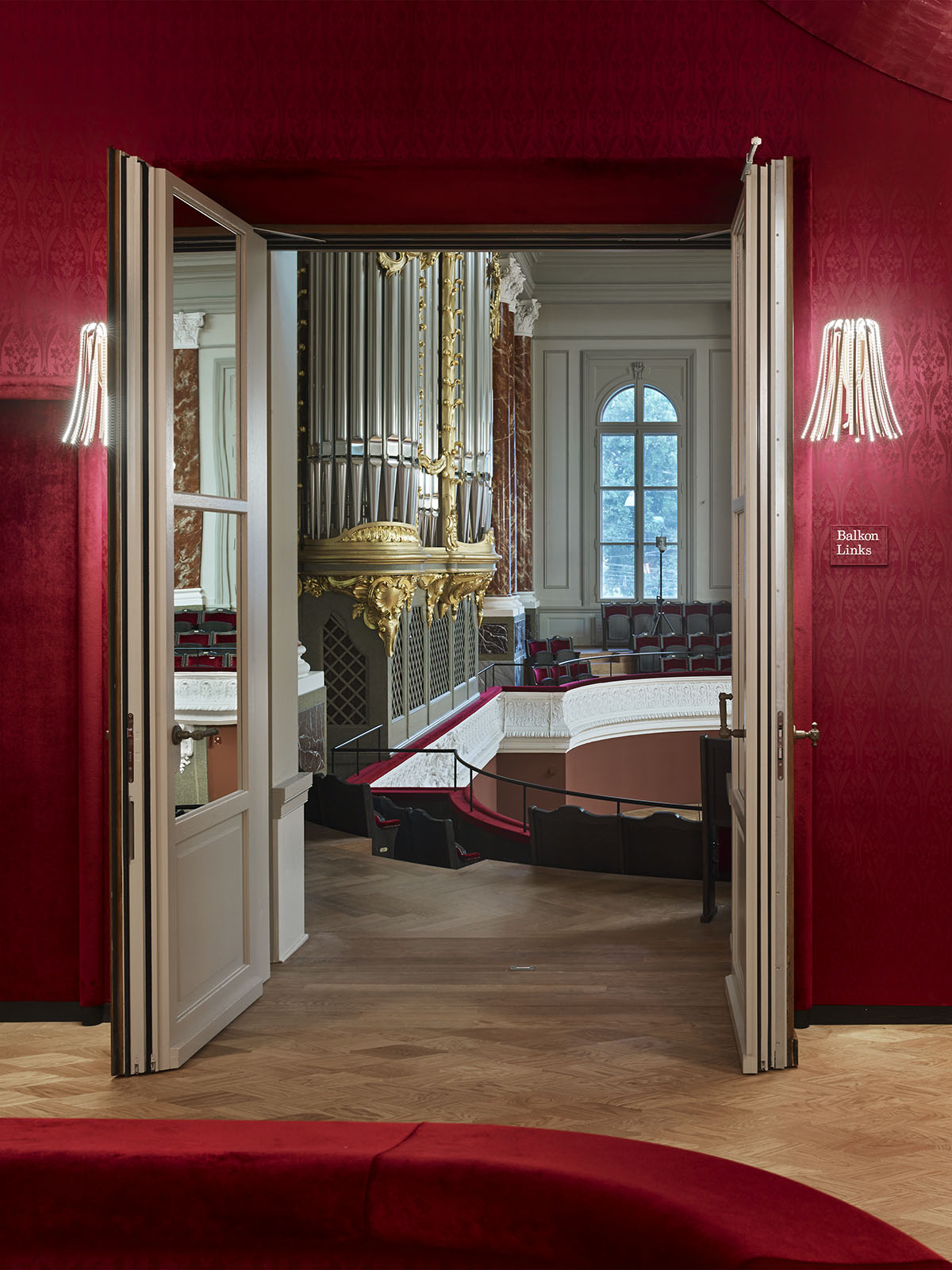 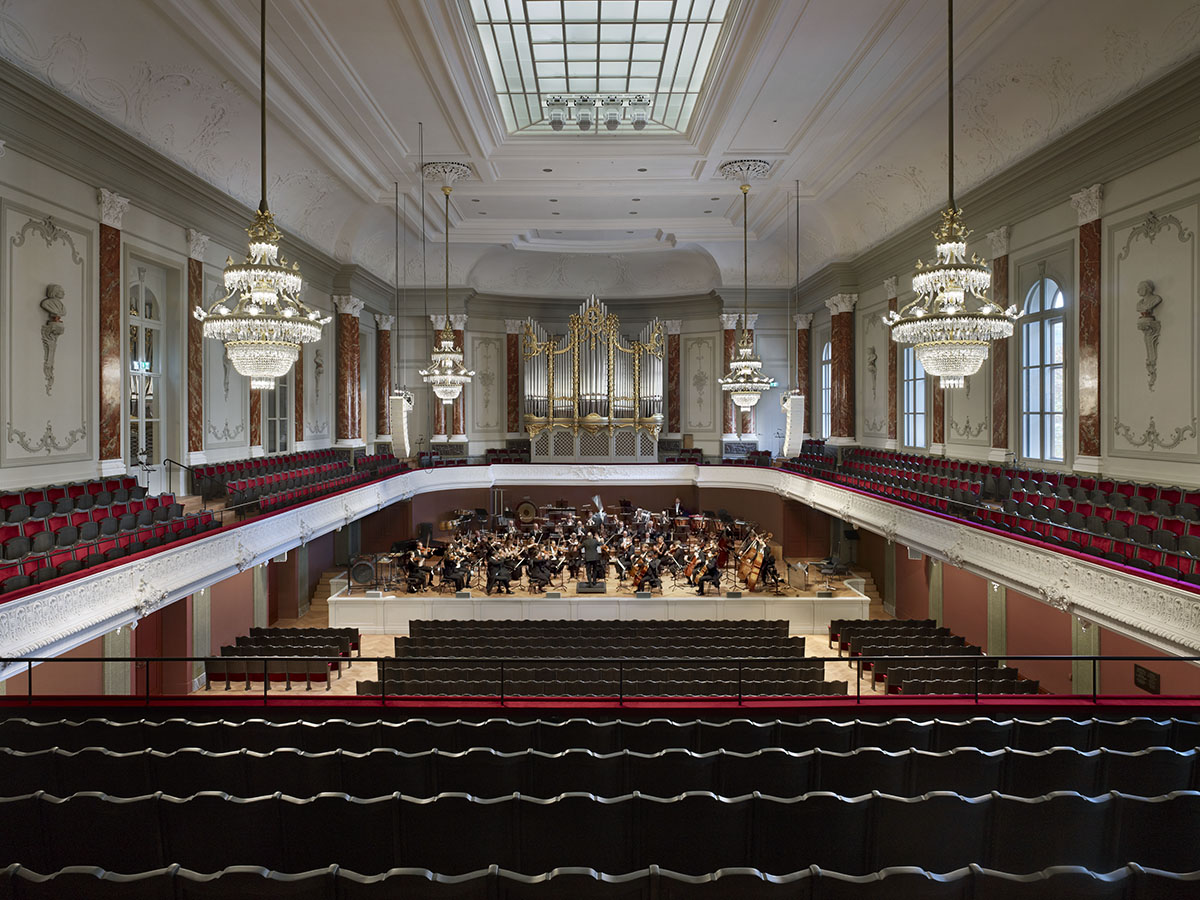 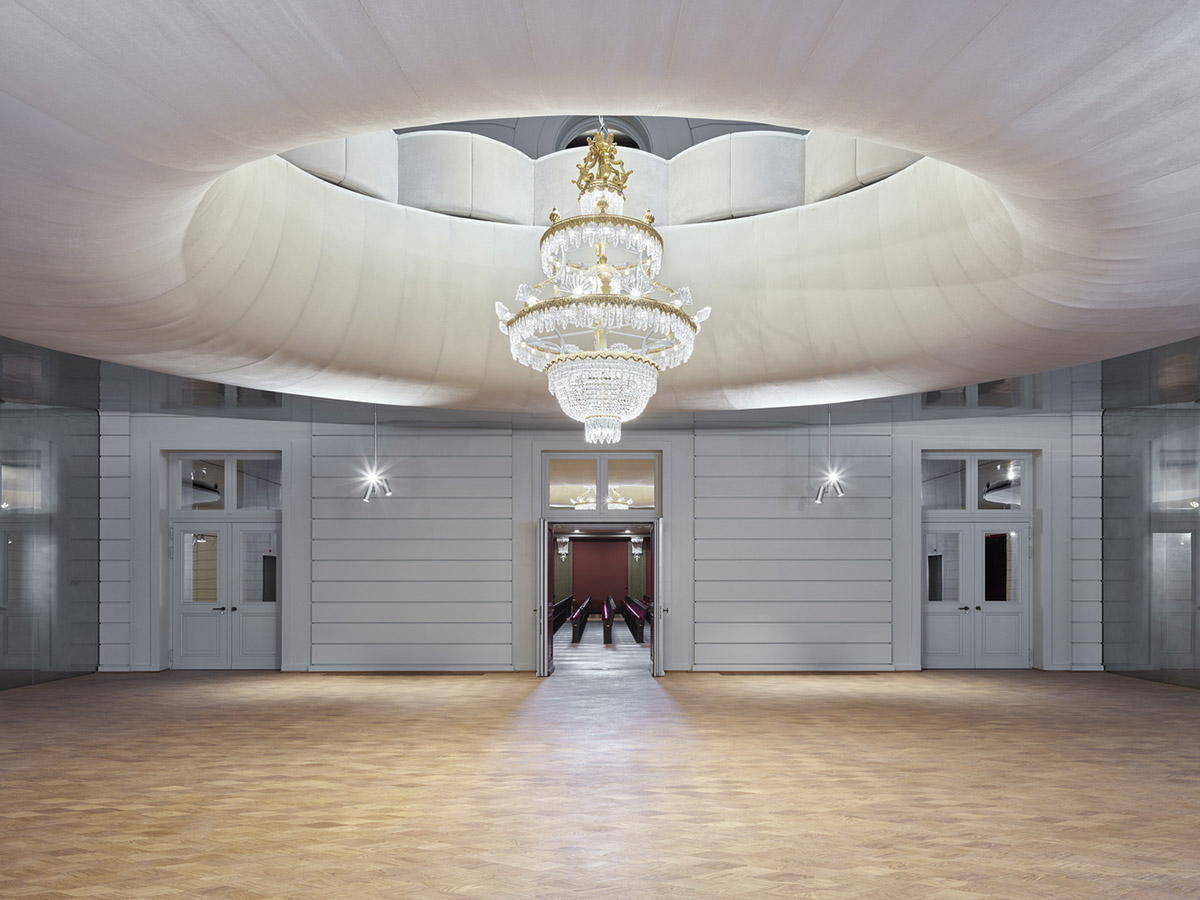 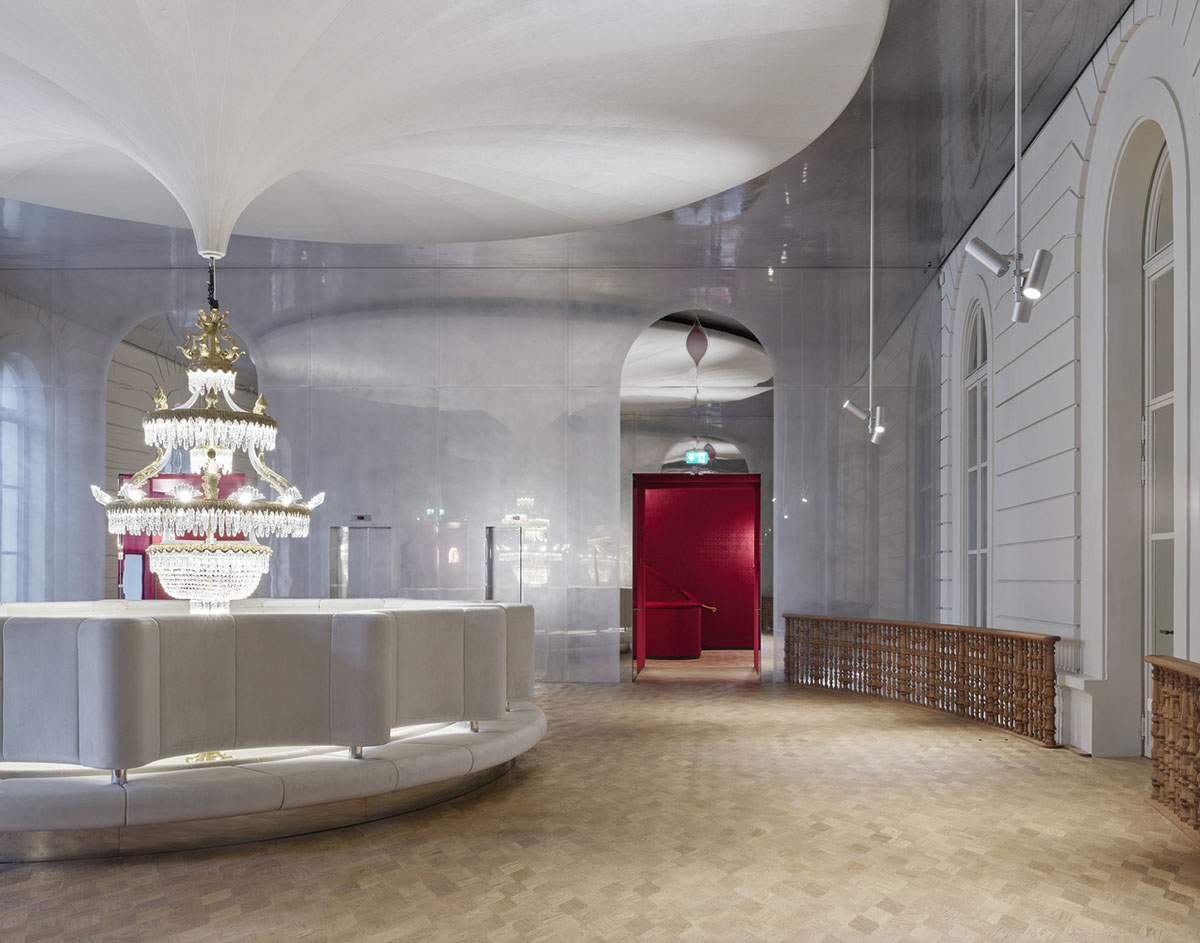 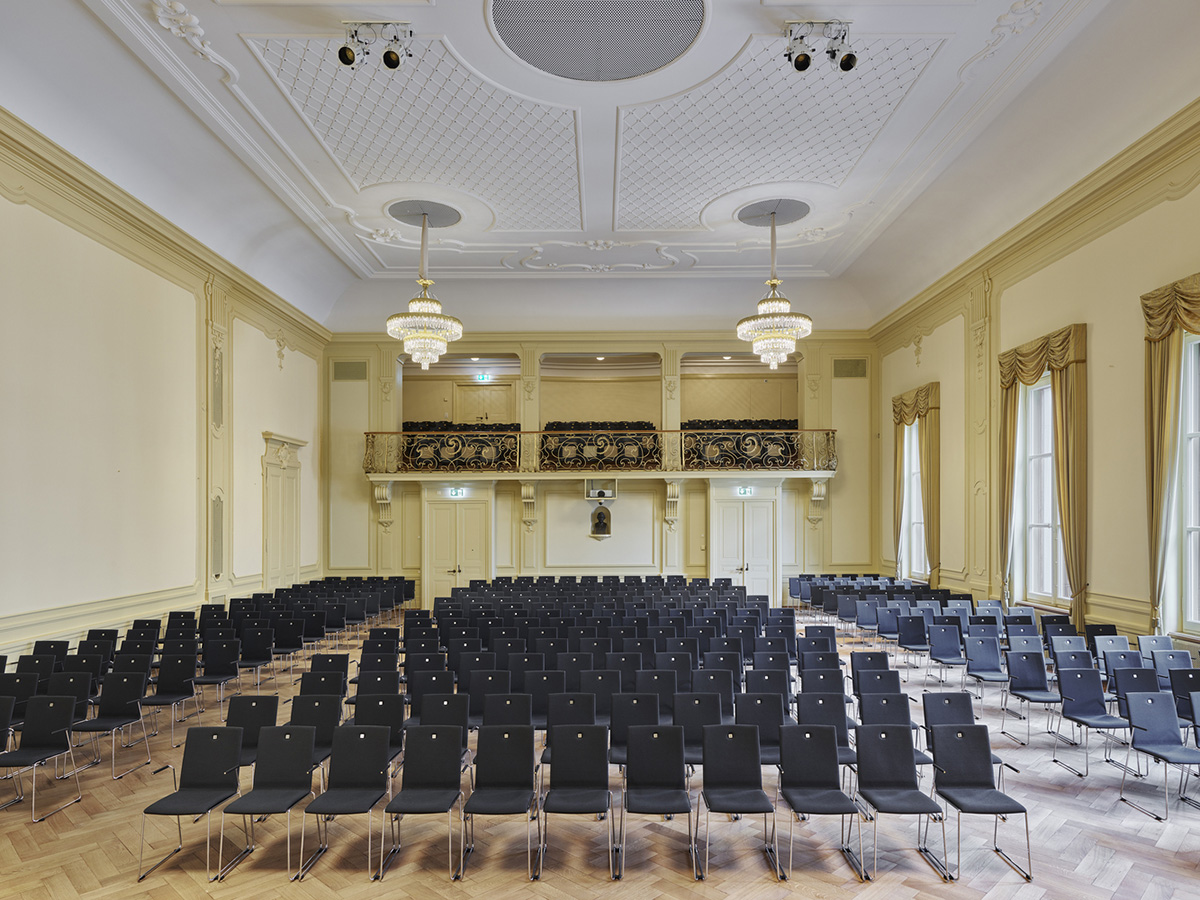 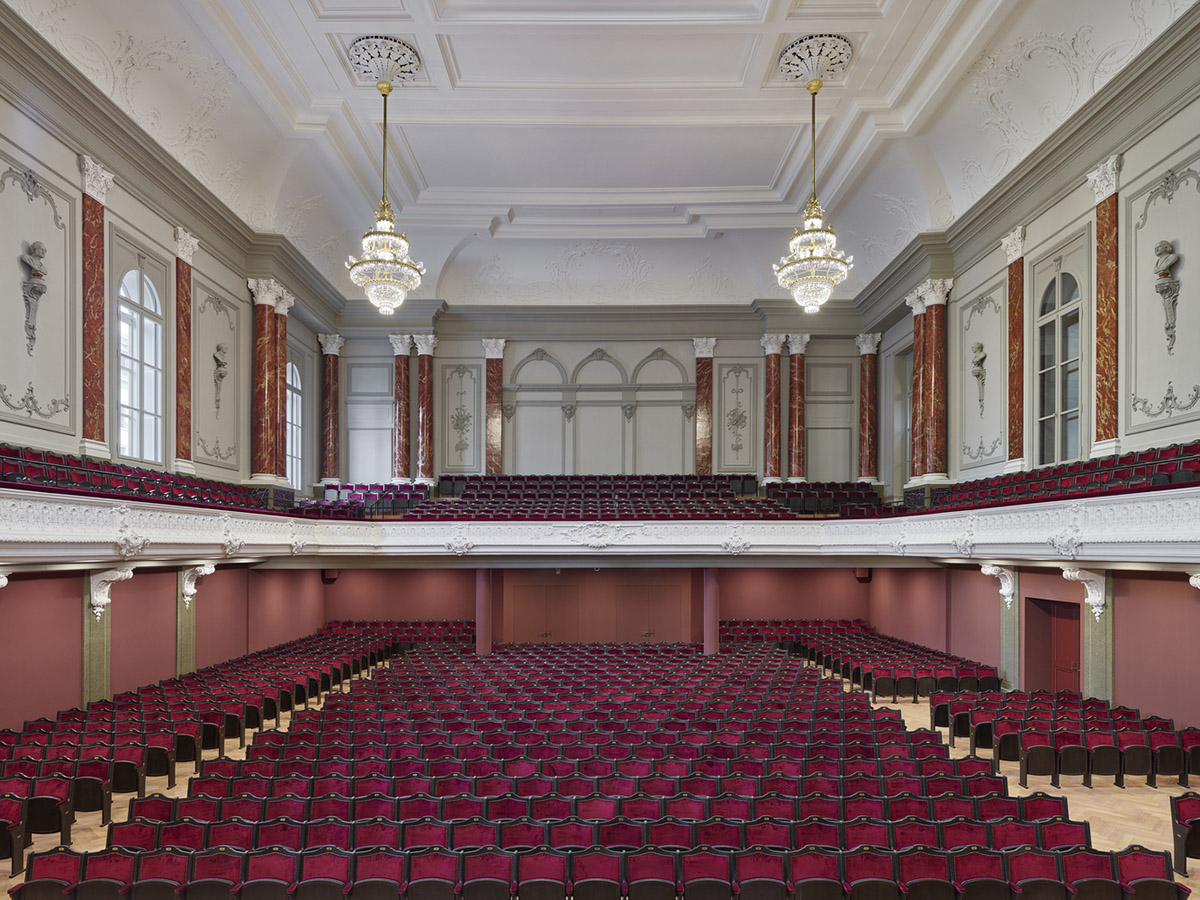 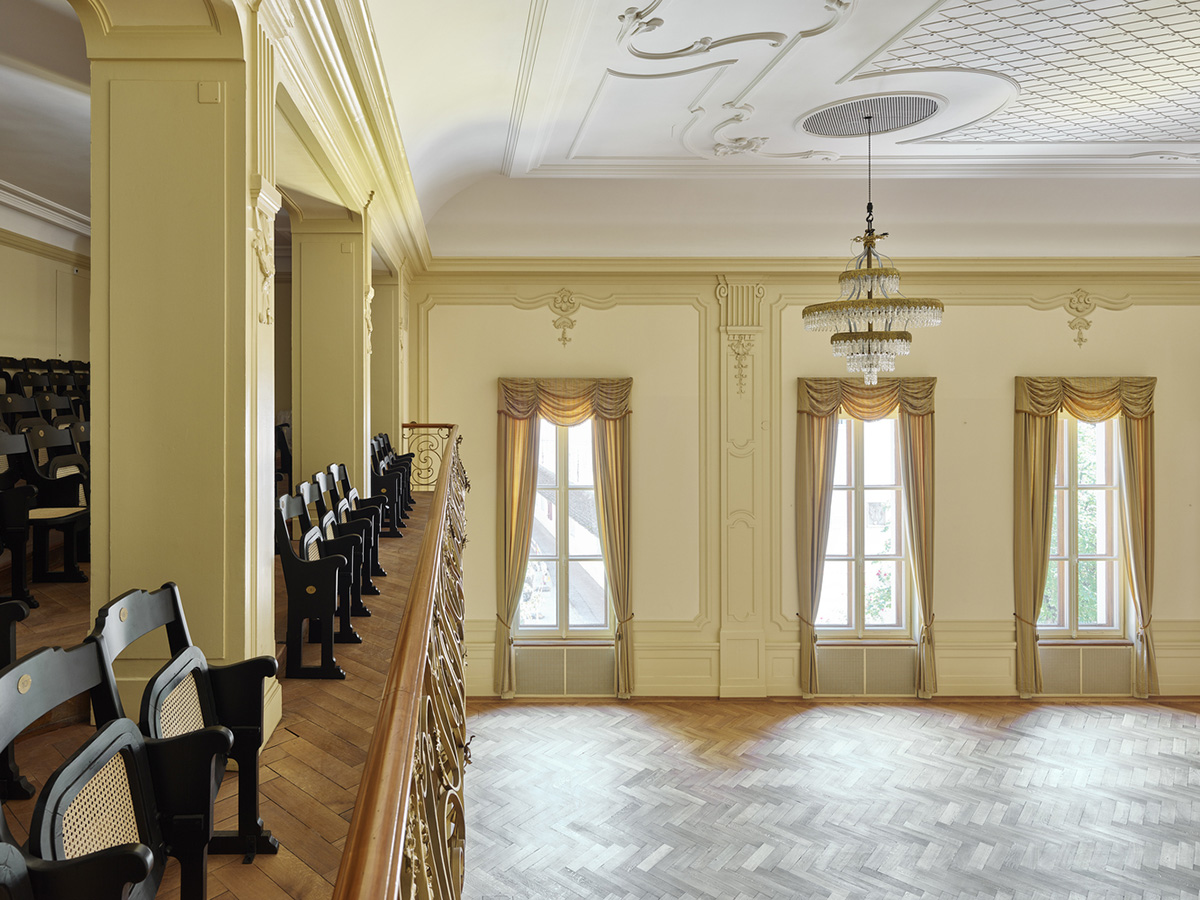