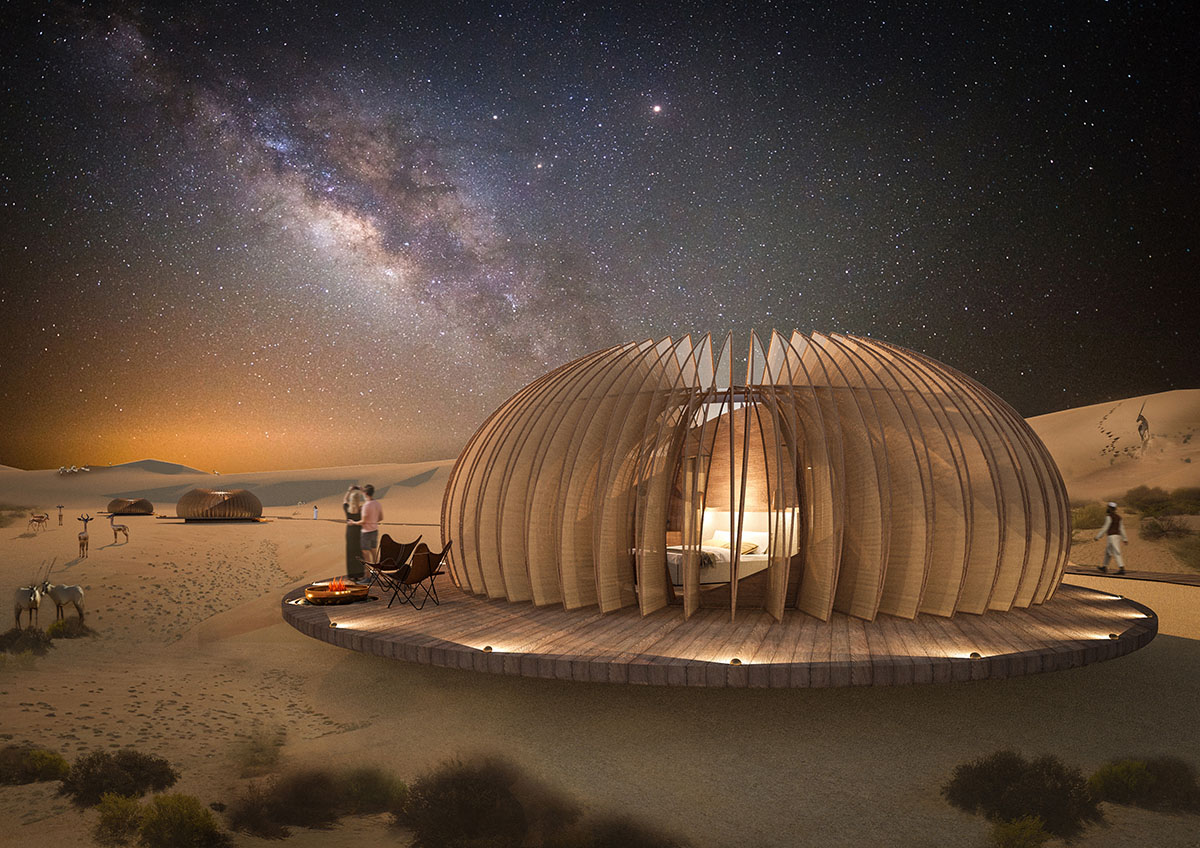 Named The Rub’ al Khali OCULUS, the design is based on a biomimetic approach that allows users to change the cabin's skin in various forms depending on the time of the day, climate and the programmatic needs of users, star gazing, spotting wildlife while ensuring privacy. 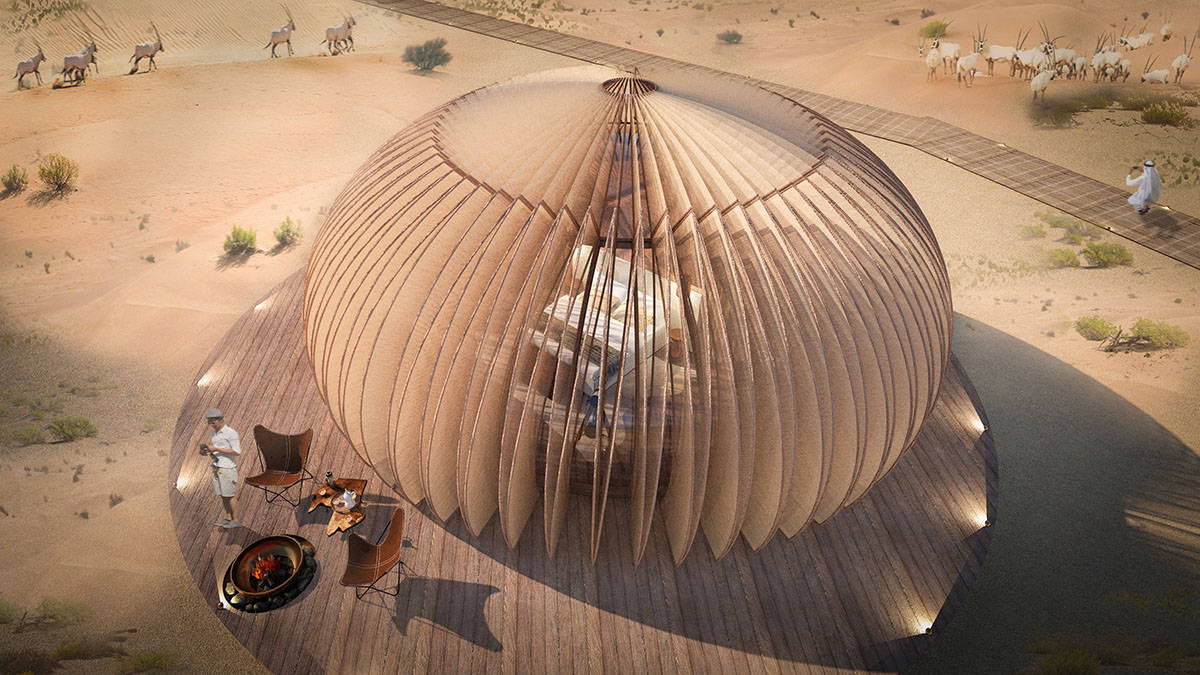 "Adaptability is at the core of a discretionary performance letting them increase activity during the night where the heat recedes," said AIDIA STUDIO.

The studio aimed to create an adaptable skin to comply with all the required functions of the cabin, the Oculus has been given a versatile shading system which contracts and retracts as needed.

At the crown, the skin system folds downwards revealing a frameless acrylic dome allowing uninterrupted views of the milky-way above.

During daytime, the skin retracts sideways opening the front of the pod and unveiling the doors to the front deck. The skin can also be fully deployed for privacy, filtering heat while allowing light for liveability. When fully deployed the pod camouflages with its surroundings becoming unnoticeable to the wildlife. 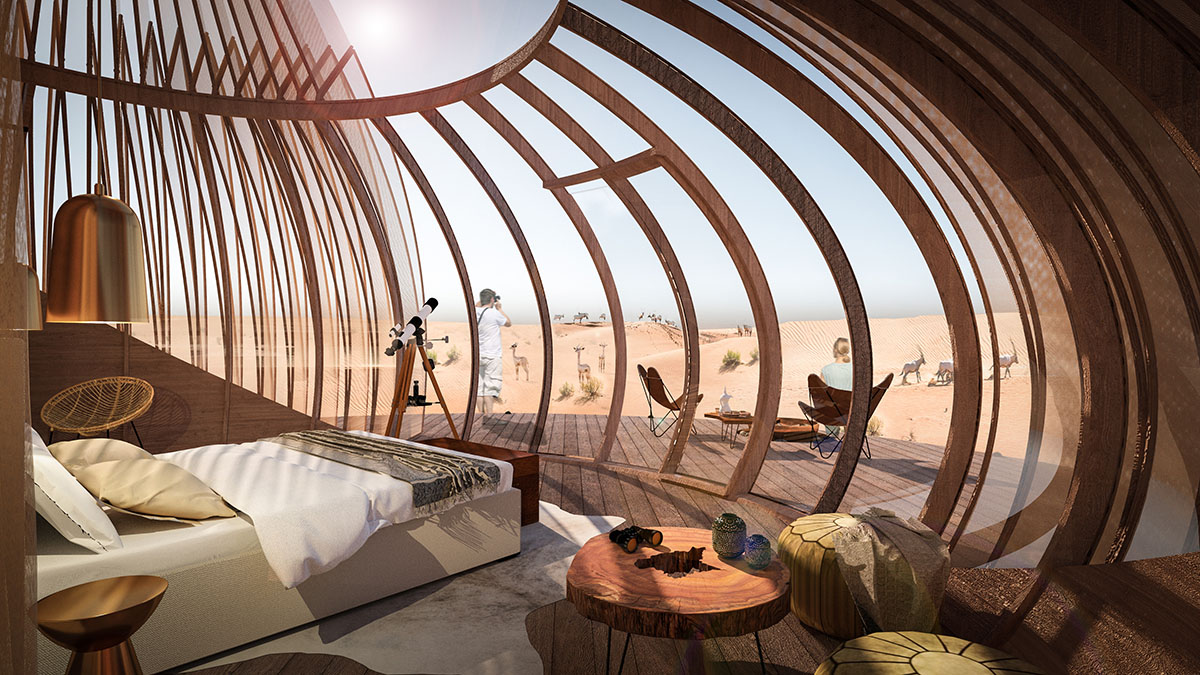 Sustainability is the core value of design, according to the architects. "The main idea behind the radial shading panels dressing the cabin, is to improve the environmental performance of the building through self-shading," said the studio.

"The design is inspired by nature and several examples of desertic cacti species which feature thick outer skins, foldings and fins that diffuse heat and solar radiation."

"This is materialised through the deployment of sixty articulated shading panels which create a dense lattice sheltering the cabin. To adapt to the curvature of the pod, the panels densify towards the crown and in doing so augmenting their reflective capability from the harsh vertical sun radiation." 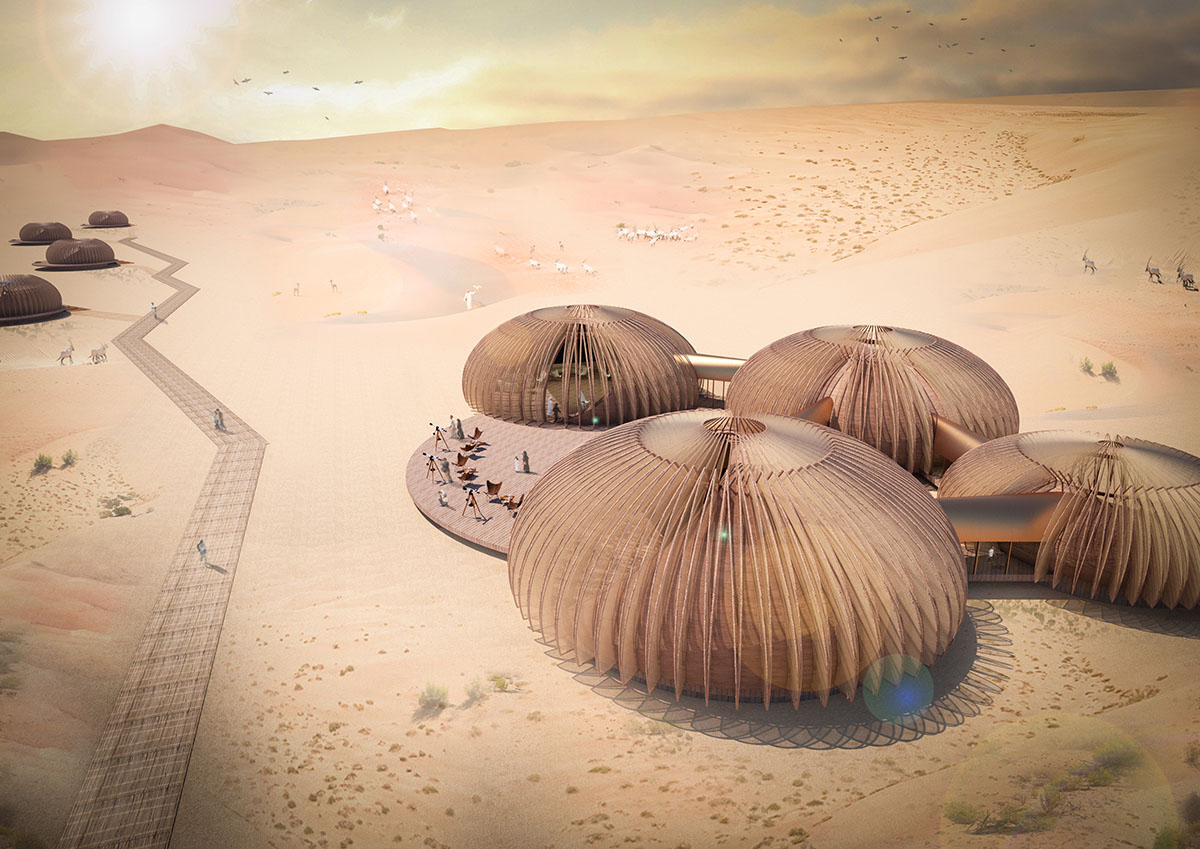 The cabin contains one room and a bedroom is situated at the center of the room, while other functions, such as bathroom, relaxing and writing room, are divided by separators.

"As the Empty Quarter has no shortage of sunlight, the design proposed to incorporate a highly flexible dye-sensitized sollar cells(DSSCs) which would be produced by sewing textile electrodes into the shading fabric," the studio added.

"Due to the large coverage of the textile and the ability of the DSSC cells to produce photovoltaic electric power, even in low level lighting, the power produced should be sufficient for supporting the needs of each cabin."

The pod will additionally be equipped with a water tank which includes a filtration and recycling system of grey waters. 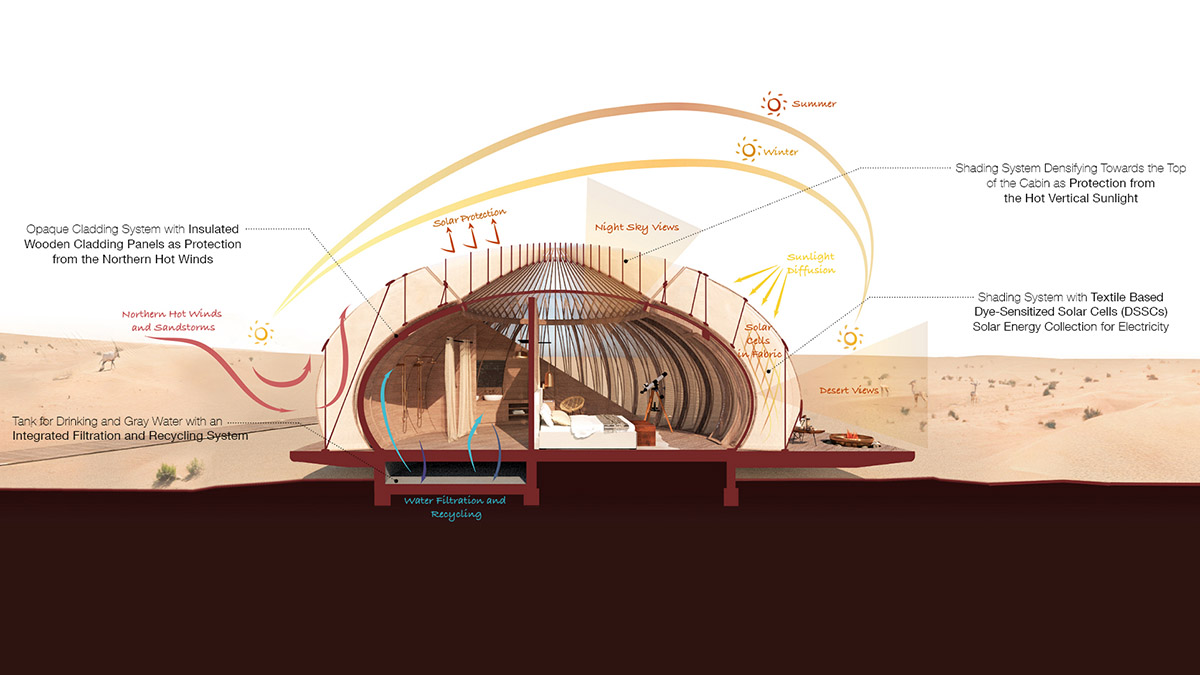 Designed as a spacious open-plan suite facing the gravel plains, the habitat of the wildlife, it is purposefully positioned to amplify the vision of the galaxy which spans east to west in the sky. The living area features a lounge for relaxation a study corner and a telescope.

The entrance to the unit is from the north side, past the entrance hall the pod boasts a wardrobe and a generous bathroom. This side of the cabin features opaque wood cladding for privacy, yet natural light floods the space from the skylight above. 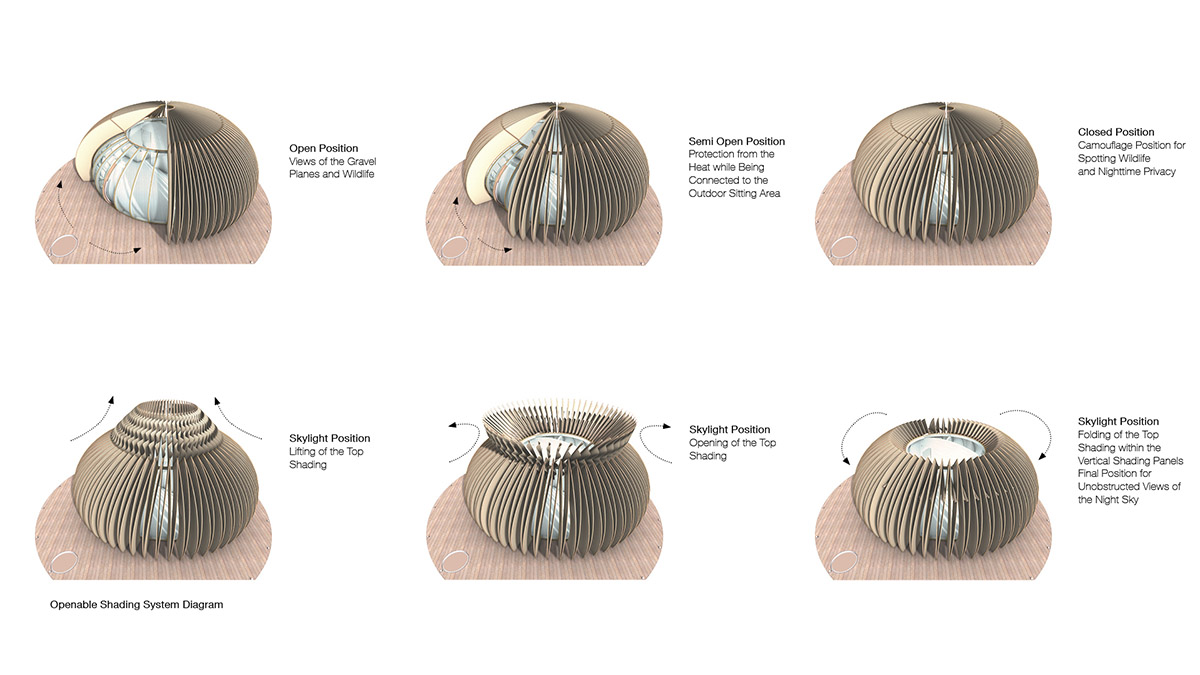 Apart from privacy, an opaque cladding to the north intends to shield the pods from the sandstorms which come predominantly from that direction. The Oculus aims to use sustainable materials such as certified wood and organic fabrics of natural colour shades to blend as much as possible with its surroundings.

As the architects highlight, the cabin can be constructed from 30 prefabricated off-site modules which can be easily assembled to erect a self-supporting structure. 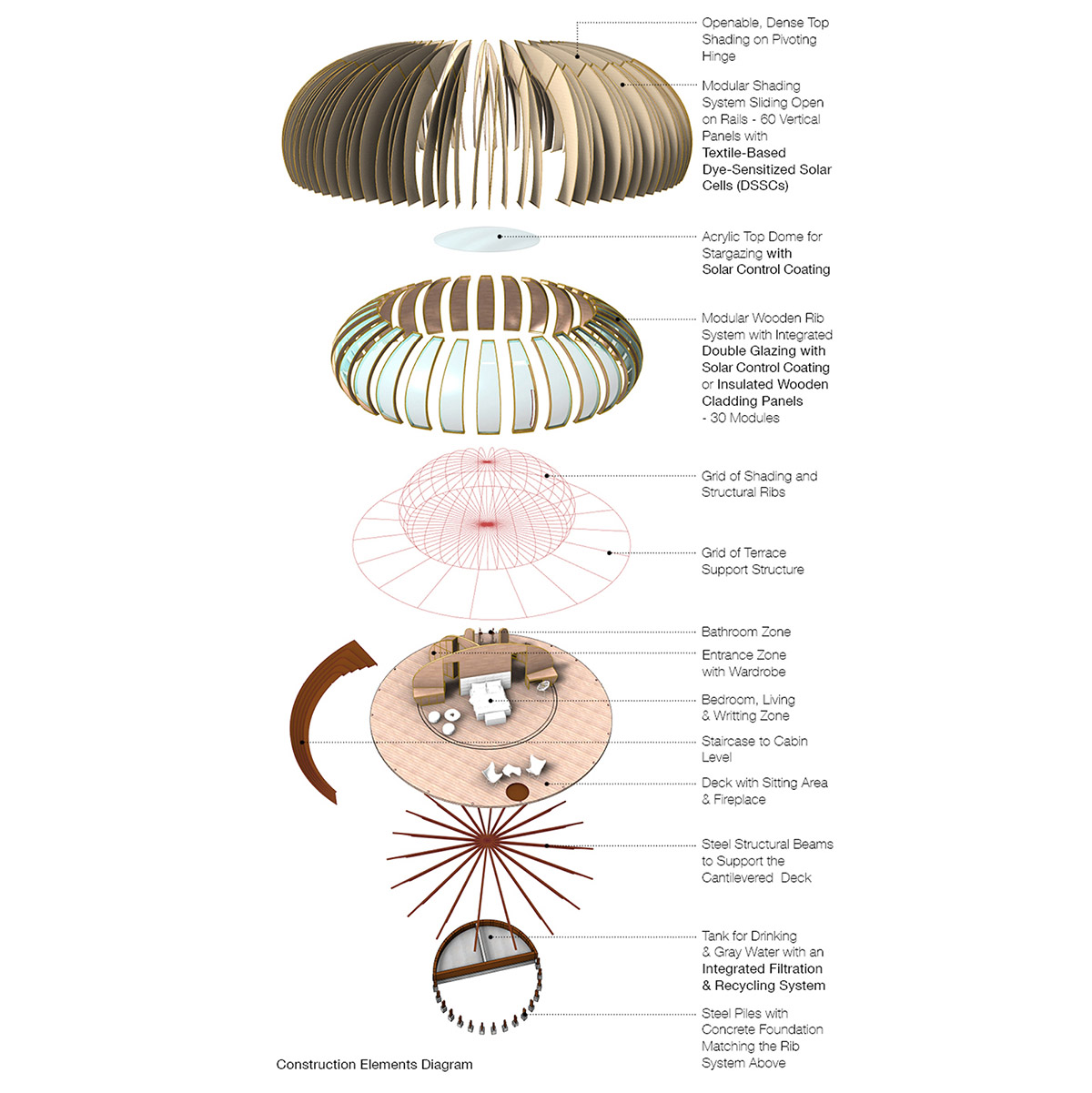 Similarly, the modular shading panels are intended to be manufactured off-site and prepared for bolting onsite. The cabin is grounded through thirty adjustable pillars allowing installation in different ground conditions. The construction process should be quick and with minimal disturbance to the natural environment.

The compound has been placed in the middle of a gravel plane backed by a tall dune shielding it from the wind and sandstorms. The 25 cabins have been spread around the site in a constellation like form providing enough distance for the privacy of the users. 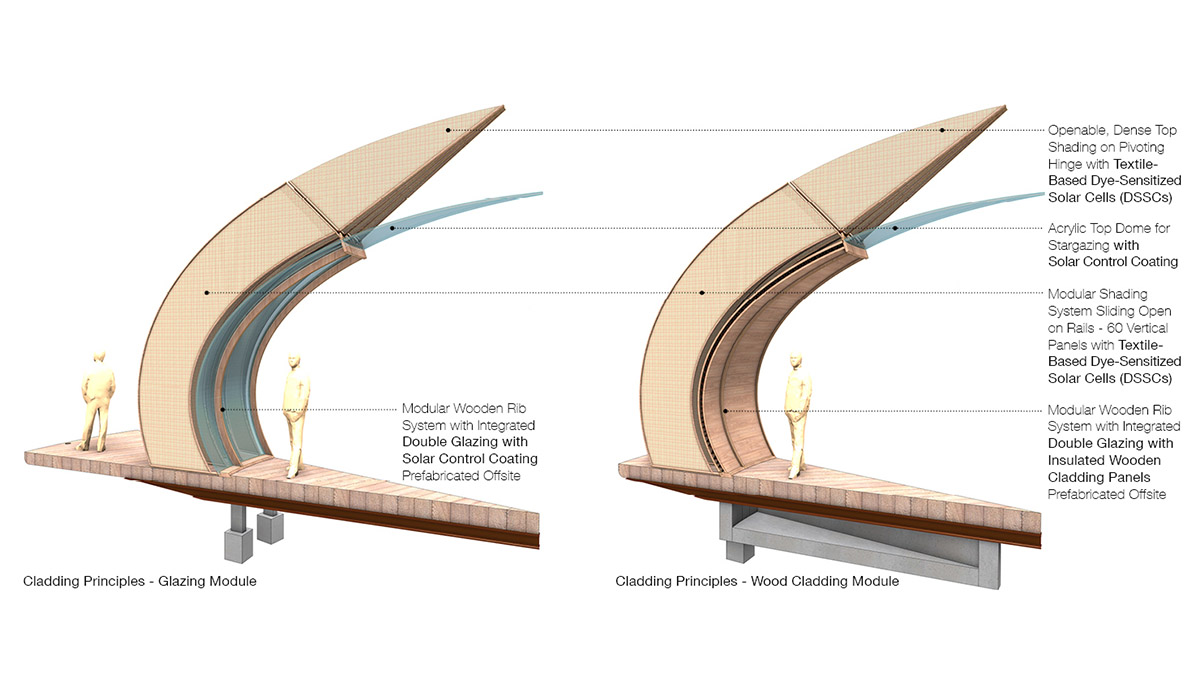 "The hub is following a similar radial design as the cabins but on a bigger scale, this is not just for conveying a coherent design language but also to achieve an economy of scale in the manufacture of all assemblies," the office added.

"The hub is divided into four independent buildings, each hosting a different function: reception and guest toilets, reception lounge, restaurant and kitchen and staff functions. All pods are interconnected via transition sleeves and held together by an elevated outdoor deck." 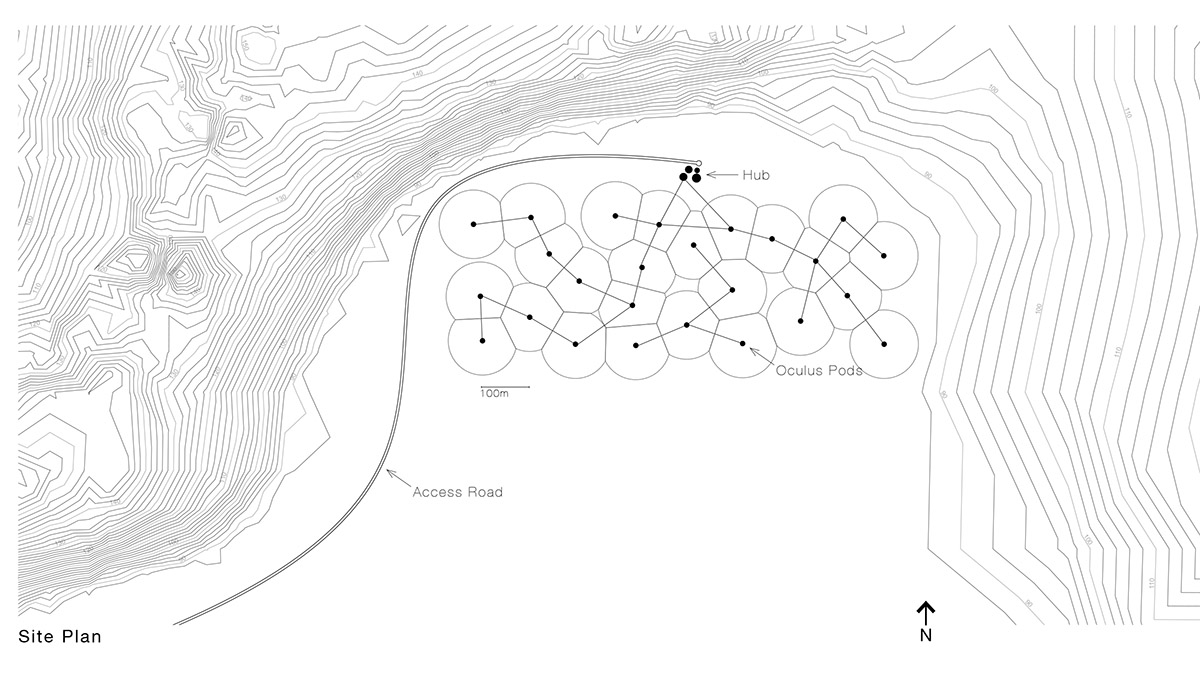 The interiors of the reception lounge are fitted with natural materials bringing the focus to the dunes beyond. A light, fabric installation hanging from the ceiling is inspired on nomadic tent structures and brings softness and acoustic performance to the main zone of the hub. 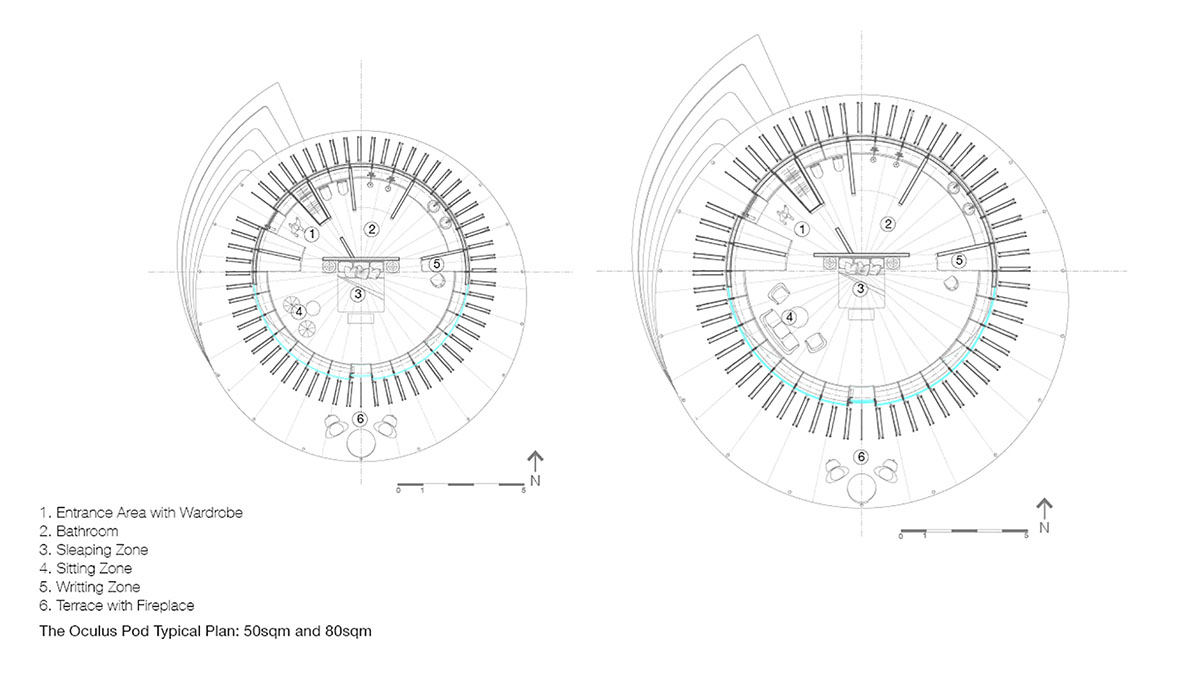 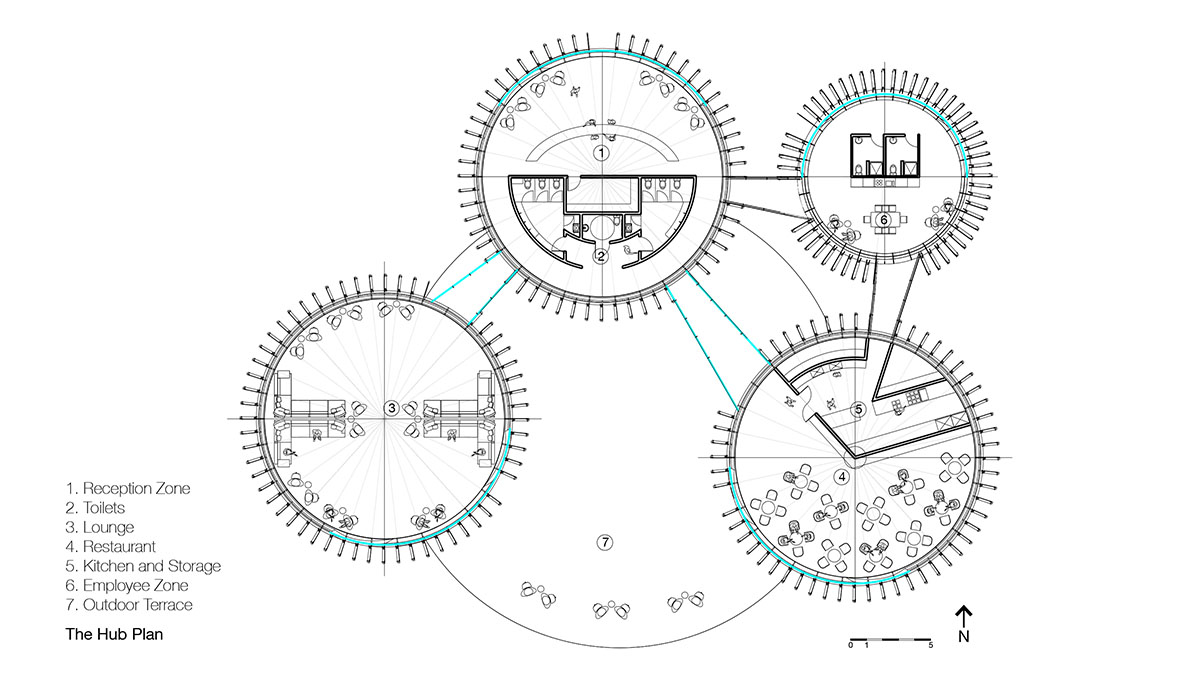 The studio works across scales and typologies from interiors to masterplans and strive always for specific responses with intricate and sophisticated beauty.

All images courtesy of AIDIA STUDIO