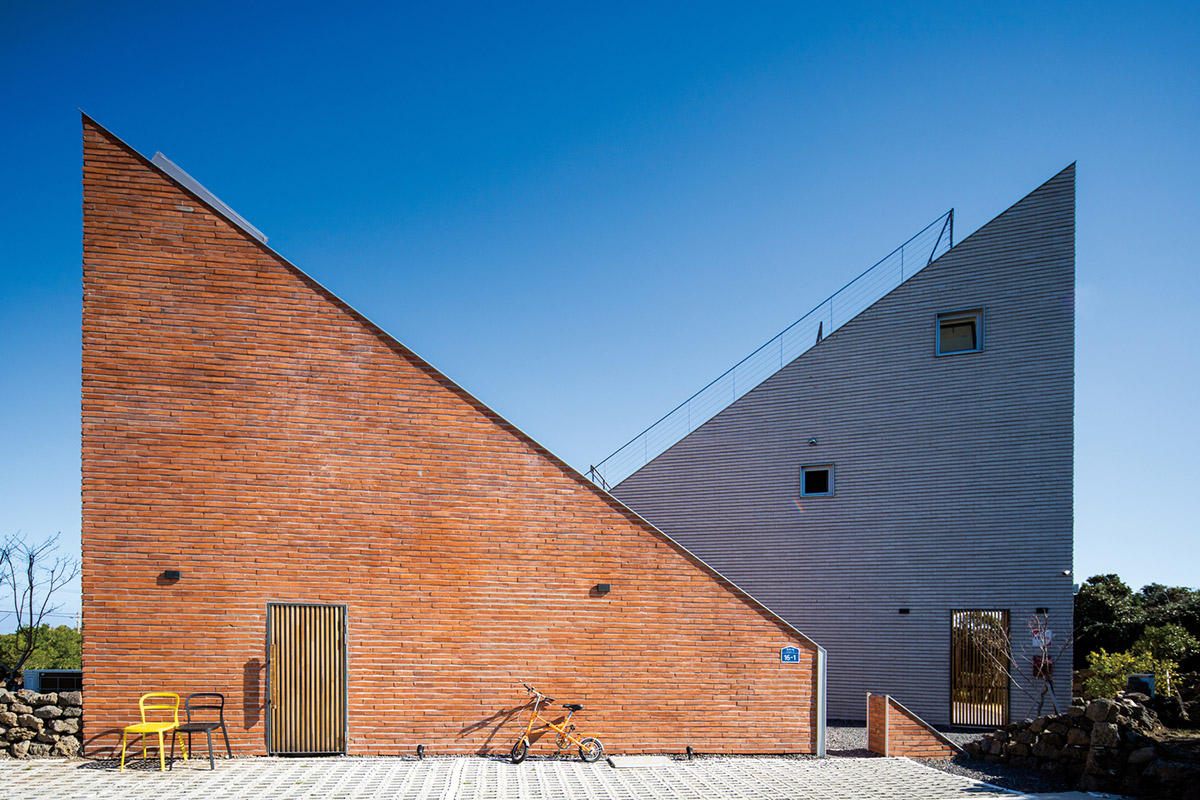 Called The Stair House, the house, covering a total of 213-square-metre area, is composed of three triangular volumes, while a volume in the middle features a claimable stairs to give a view to the site. 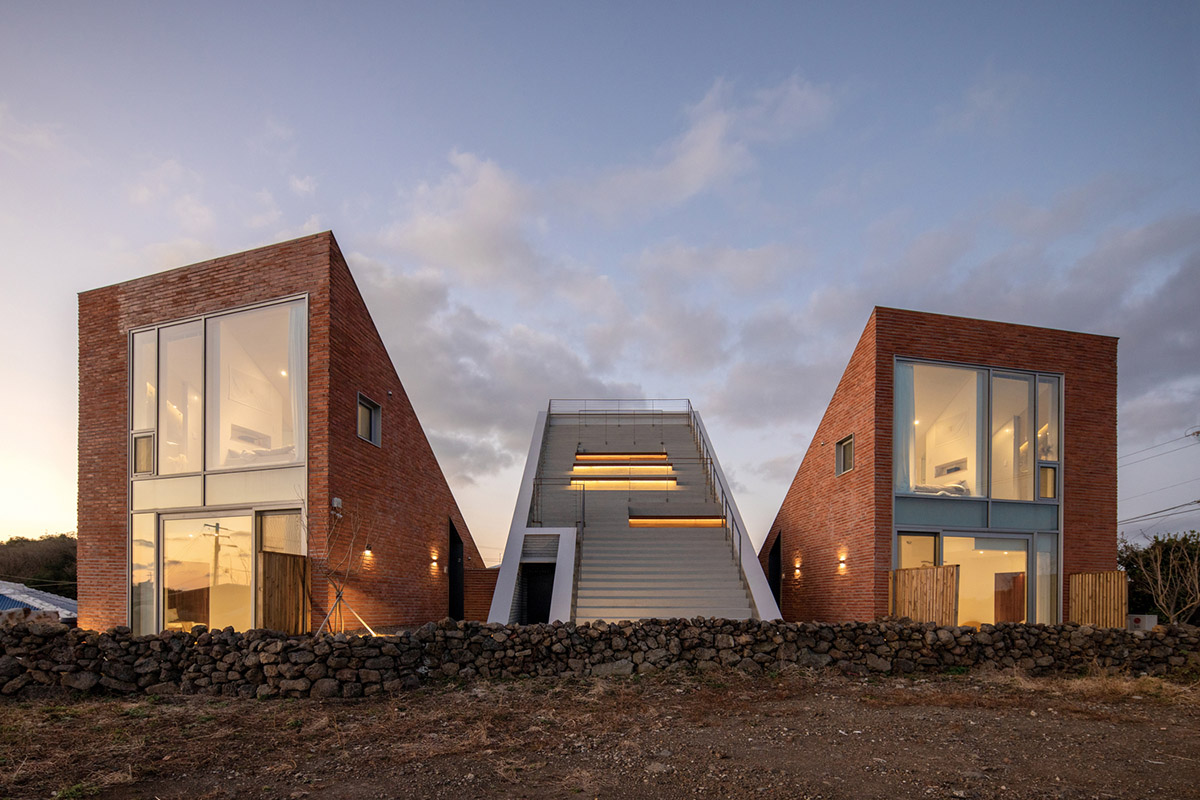 The site is located at a place called Pyeongdae-ri, which has a wide and flat land (Jeju language: Bengdi) that continues to the beach from the beautiful Bijarim Forest of Jeju Island. 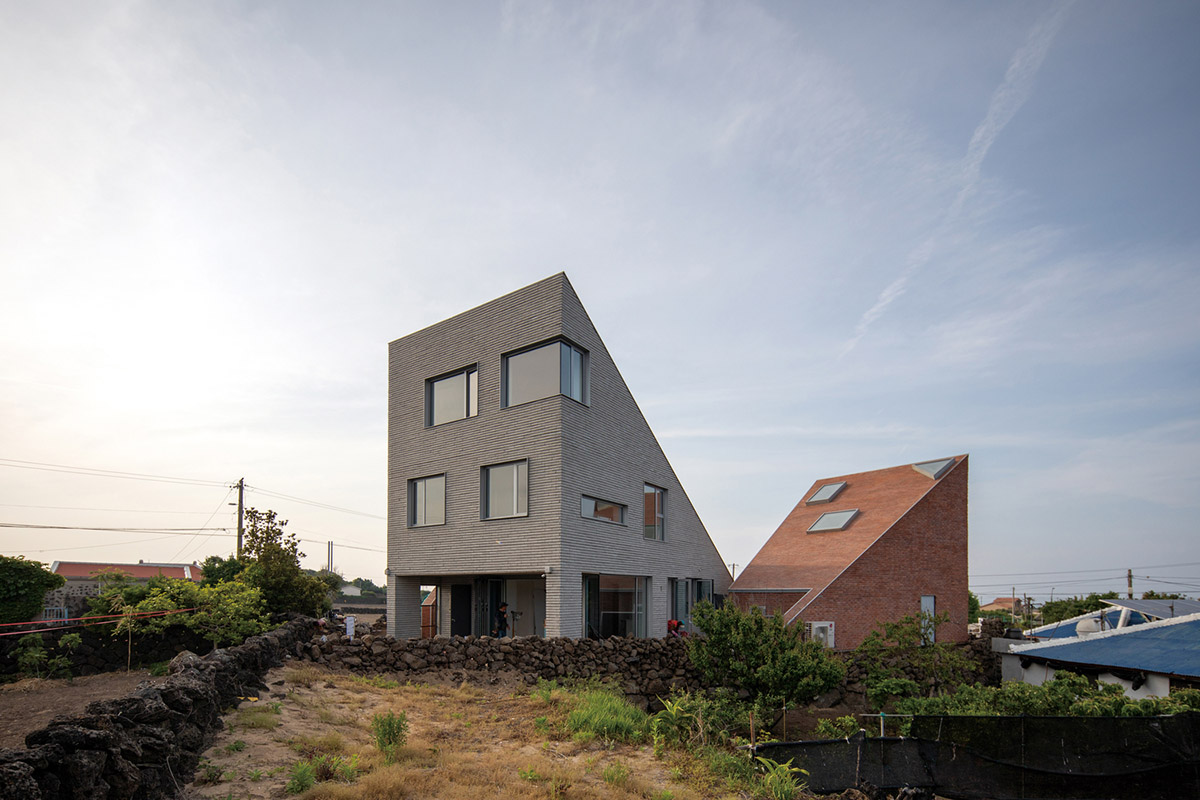 As the architects highlight, the client wanted a space where they could live in and make a profit and commissioned the studio to design the house with additional guest house which can be rented.

"They needed to be able to run accommodations and provide the food for guest themselves, and each space had to be distinctly divided for the guests' privacy nevertheless organically connected for the ease of management," said Formative Architects.

The architects divided the spaces and settled within an atypical site naturally create some unexpected yards of different personalities, and as those yards intertwined with each other, the architects were able to vaguely contain the transforming spatial personality of Olle Trails that lead to traditional Jeju houses. 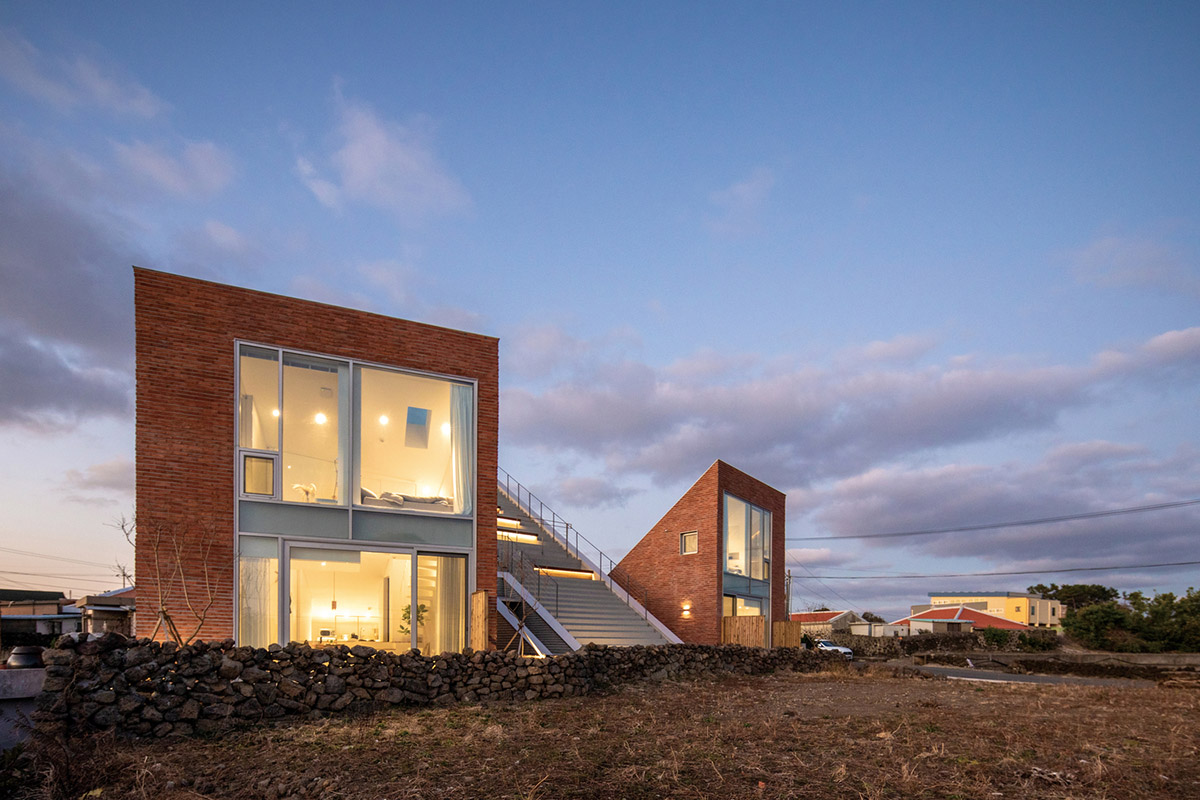 "Rather than a building with a large volume, we wanted it to be divided and naturally settle in while understanding the flow of the terrain," the office added.

"Furthermore, we wanted the visual change of the building's facade depending on the change of people’s view walking along the Olle trail to be visible, and the blue sky to be seen between the divided buildings rather than a large facade." 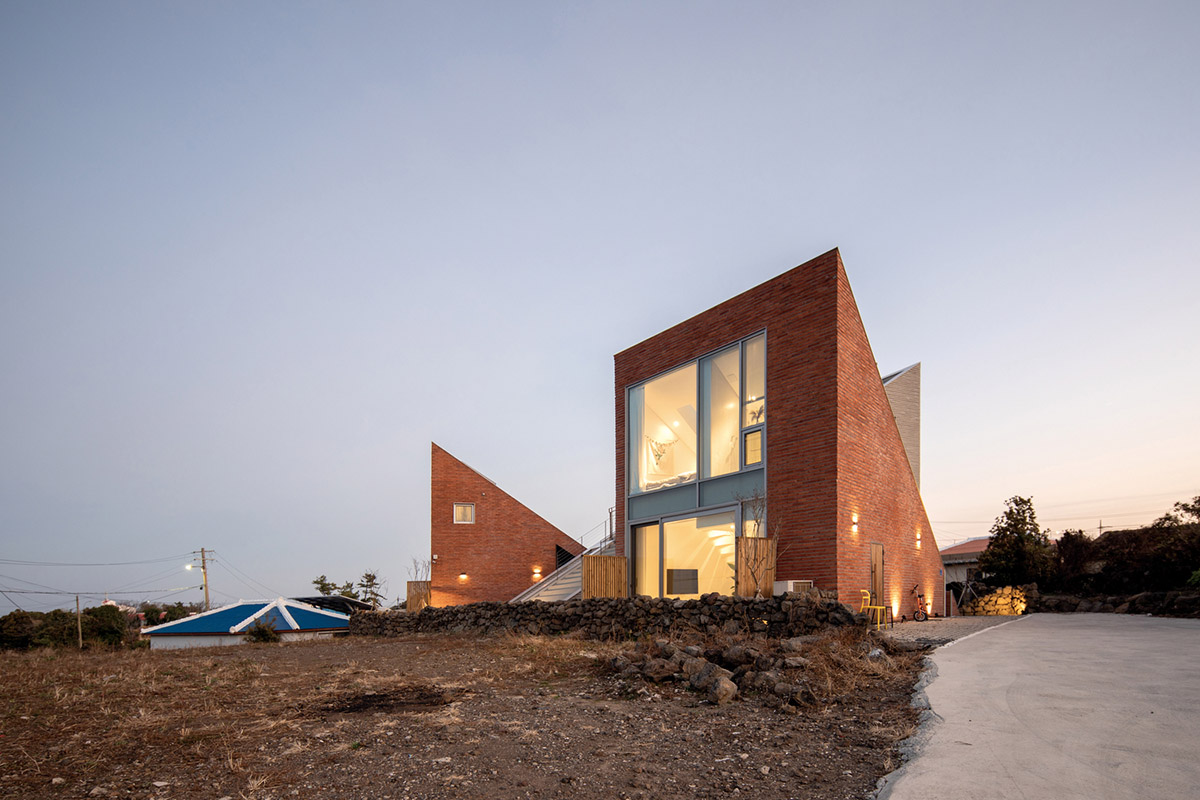 A building that can provide a visual extension within the site as people naturally go up and down the elevated topography of the flat land was designed, and by using the same material as the exterior wall and roof for the material of the facade, the concept was aimed to be more solidly maintained.

In particular, the stairs of this place have a dynamic and static personality at the same time. This is because they have a personality as 'landscape stairs' rather than a personality of stairs that simply overcome heights. 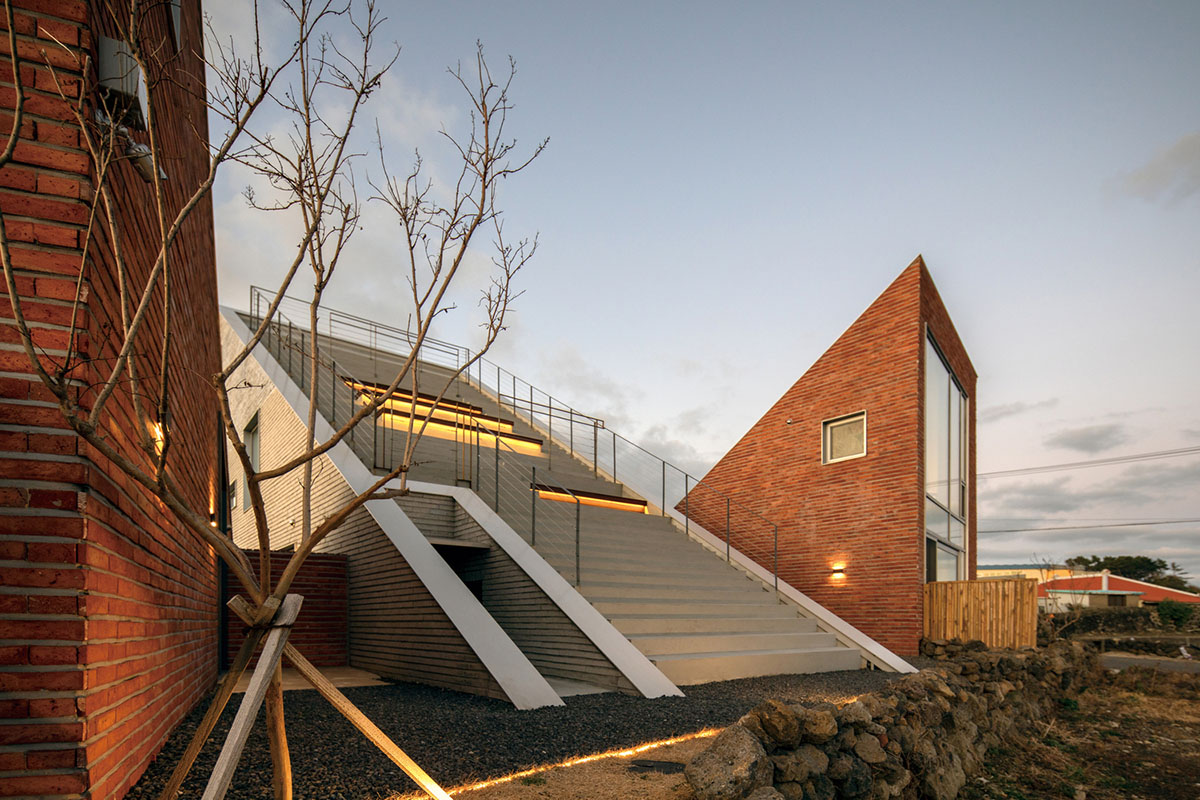 The stairs are formed up to a height of about three-stories, and when one climbs the stairs, its personality will be explicable through the joy of the unexpected visual openness from the first floor level, as well as the visual transformation that ascends along the alley on the continuity of the Olle trail until this place is reached. In this space, the stairs become one with the house and nature.

The interior spaces have various levels according to the triangular form, and consists of individual spaces. The two buildings, finished with red bricks and used as accommodations, have an area of about 50 square meters and consist of two floors. 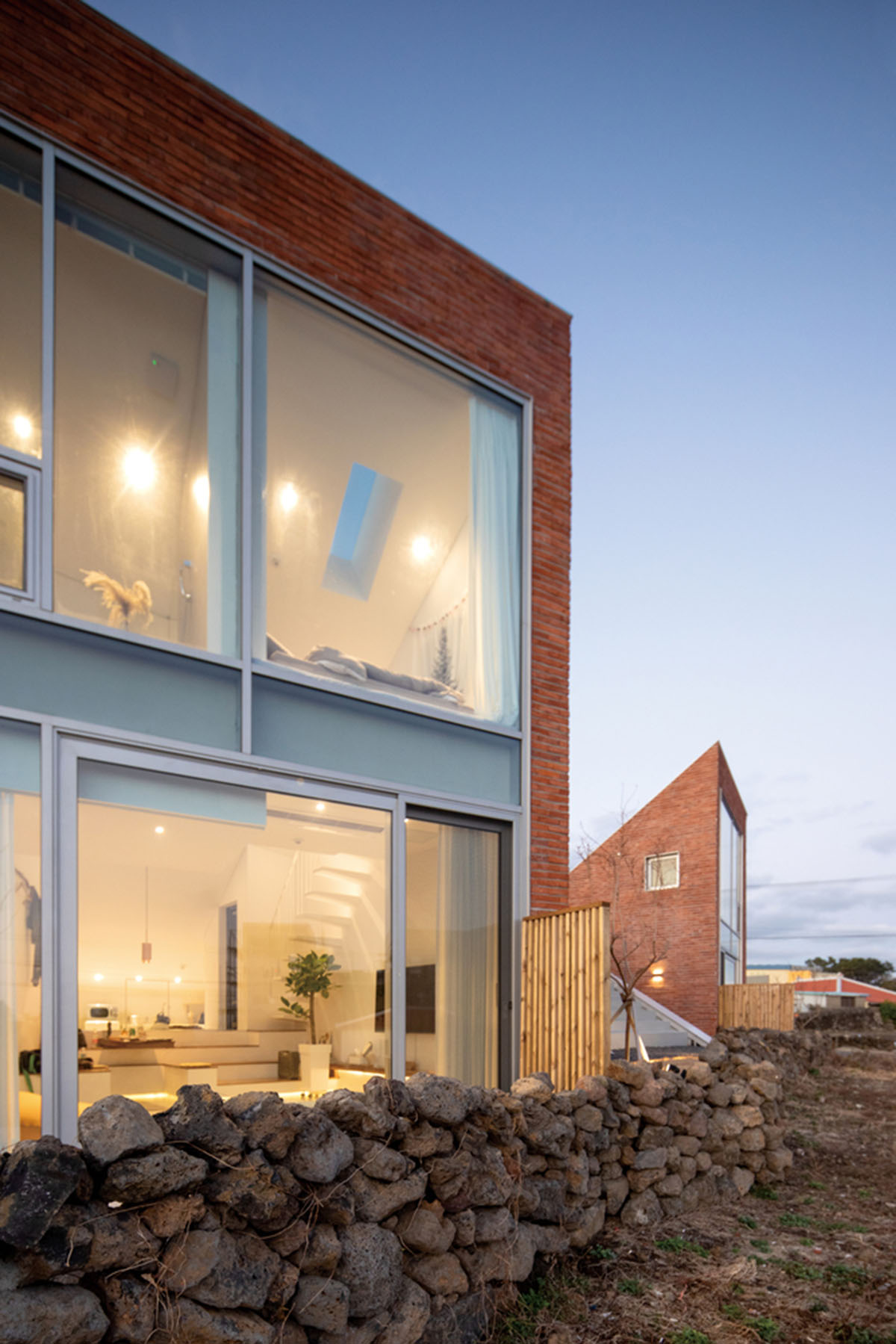 By placing a bedroom and bathroom that overlook the ocean even in a small area, they were made to be organically connected with two individual connecting circulations from the living room space on the first floor.

As for the residential building, the first floor consists of a family room that is actively connected to the exterior yard as well as a kitchen space and pantry. 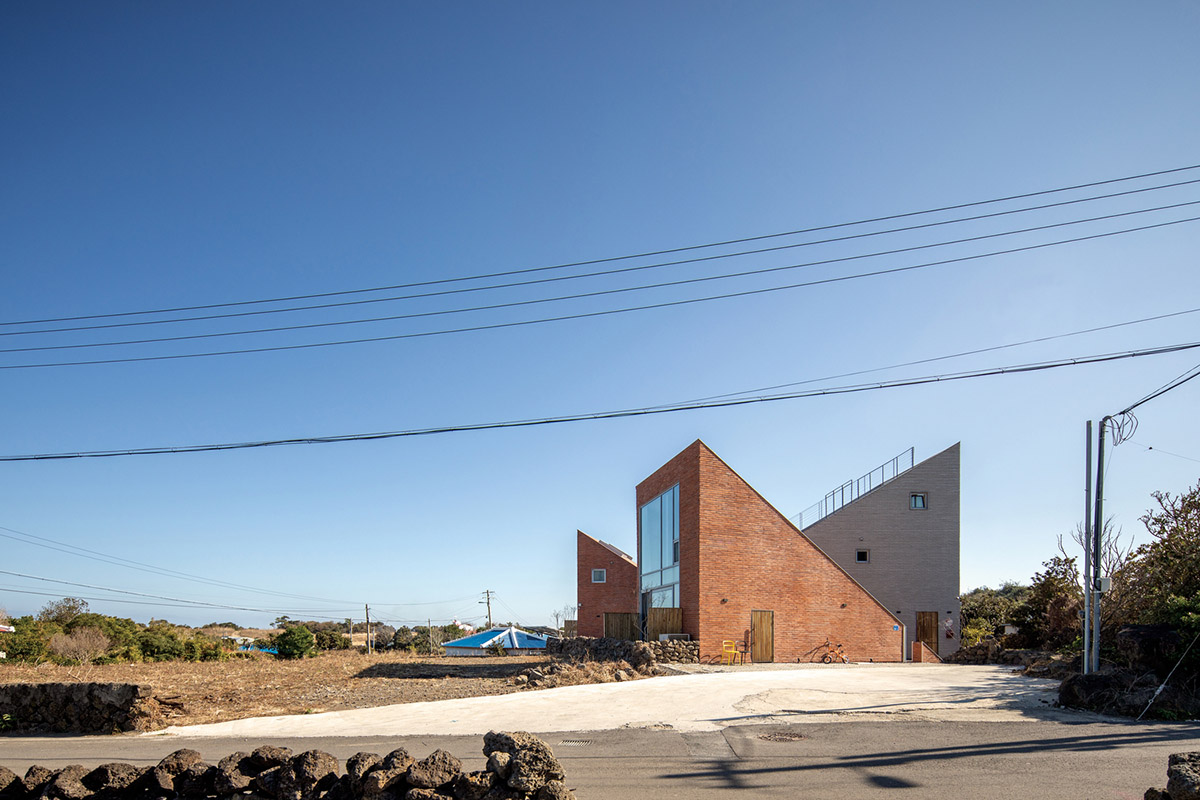 The second floor consists of a space where the family can enjoy their hobbies or work, and the third floor is composed of rooms for the two daughters.

As all of these spaces are closely connected to each other visually and spatially, the division of areas according to levels within one space was made to be possible, rather than the division by floors. 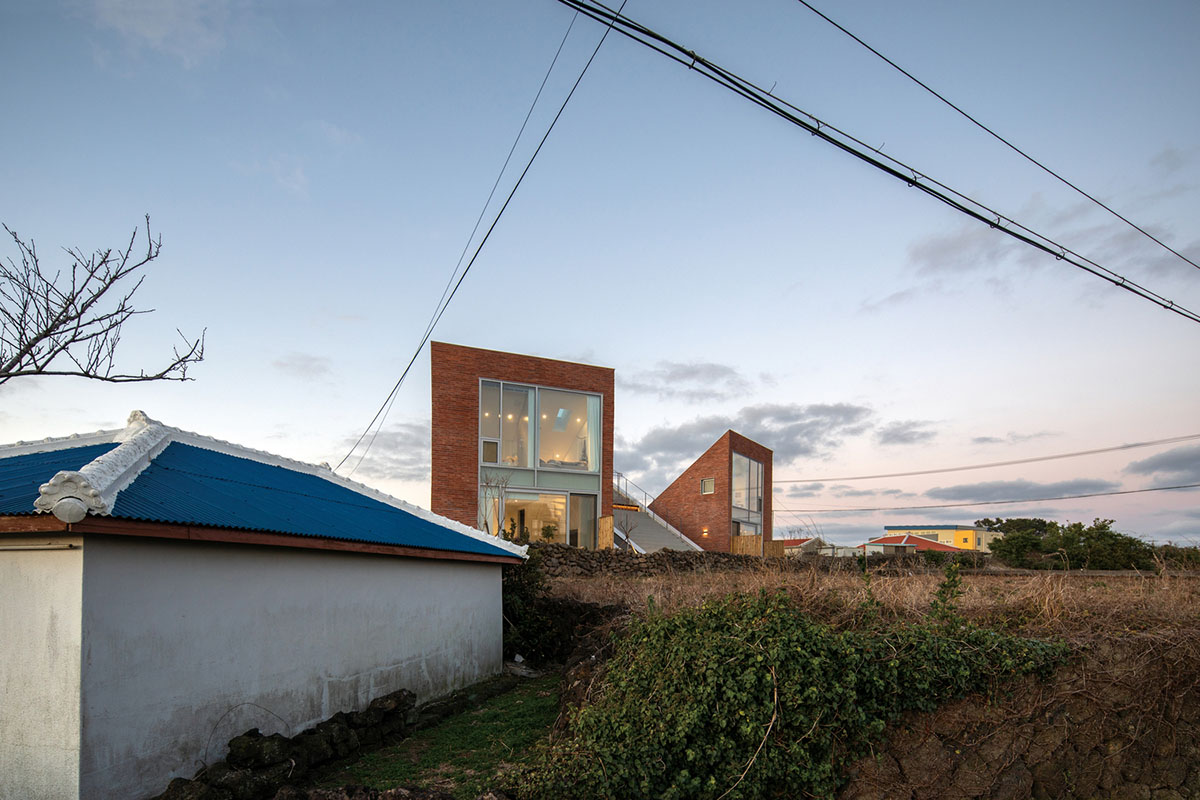 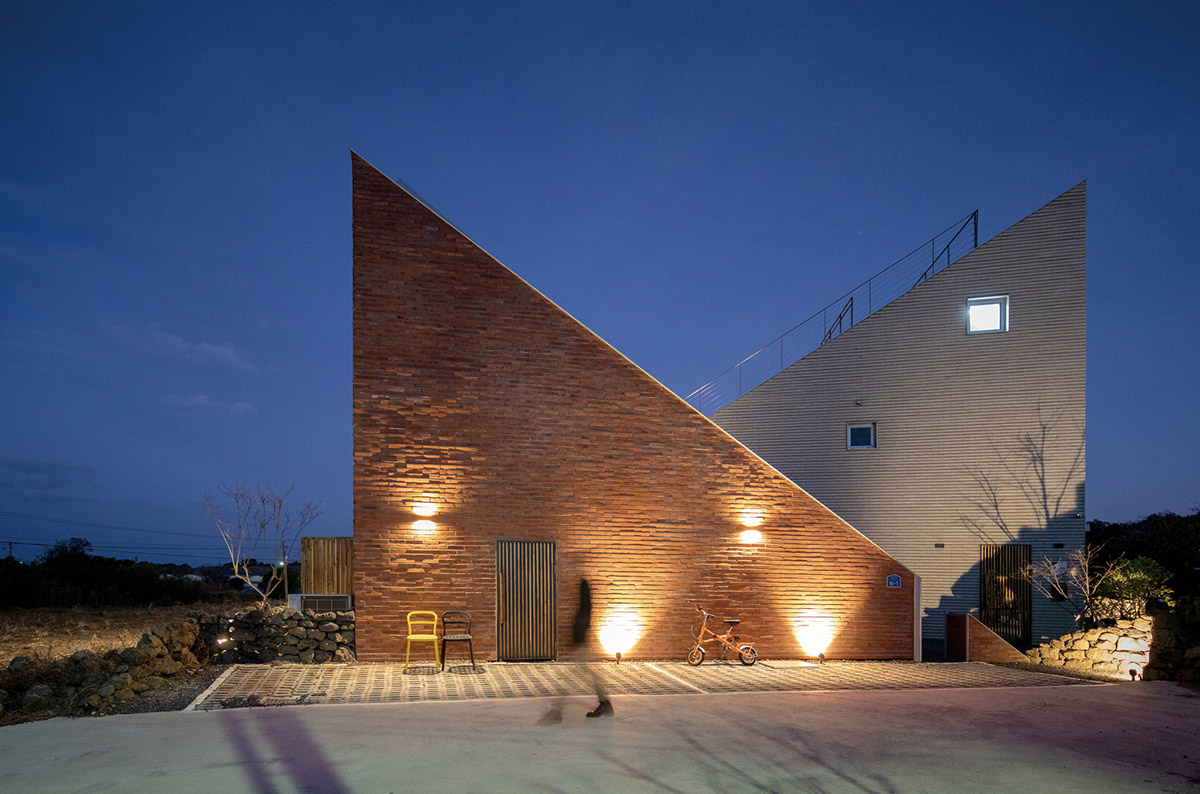 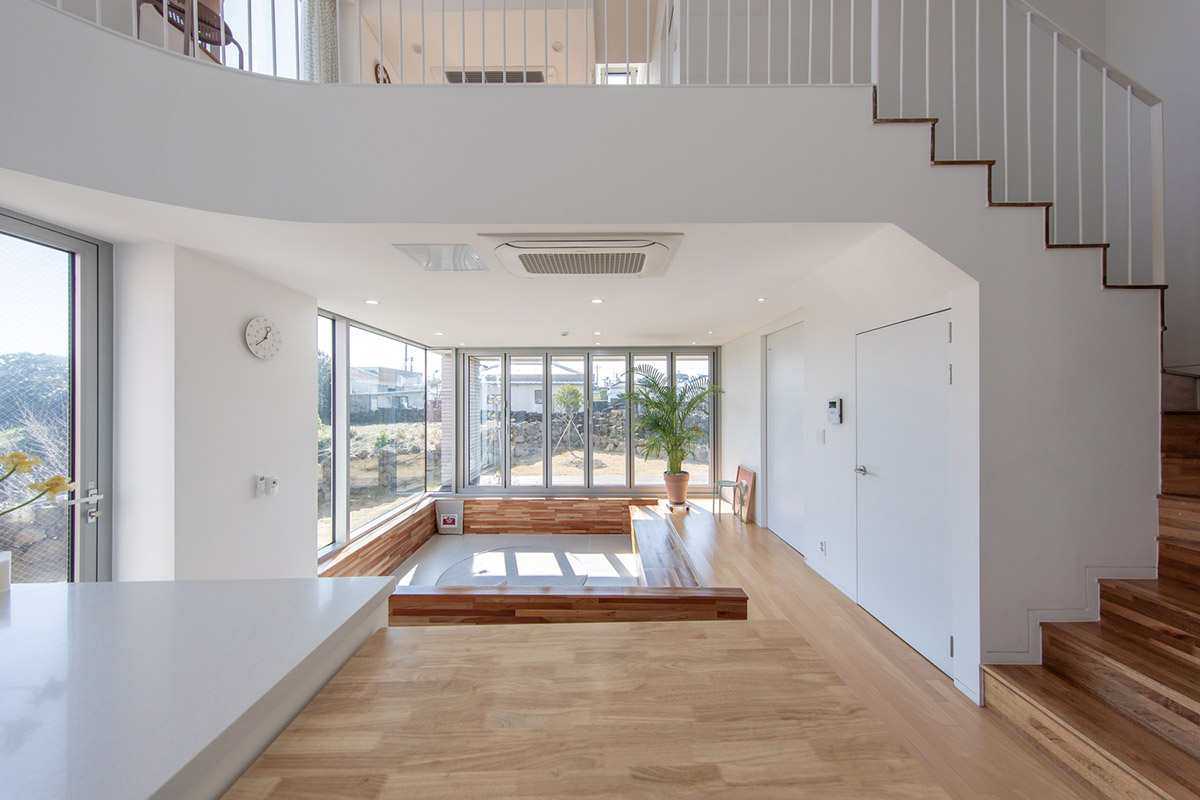 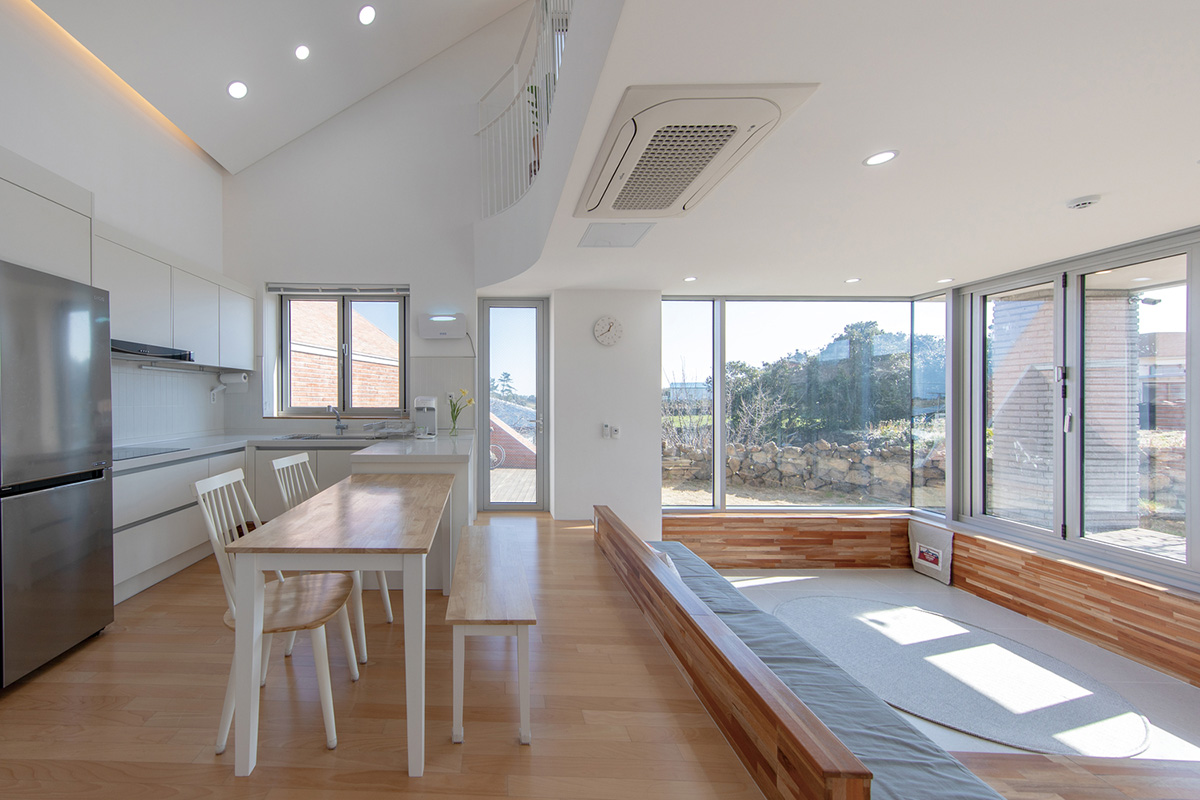 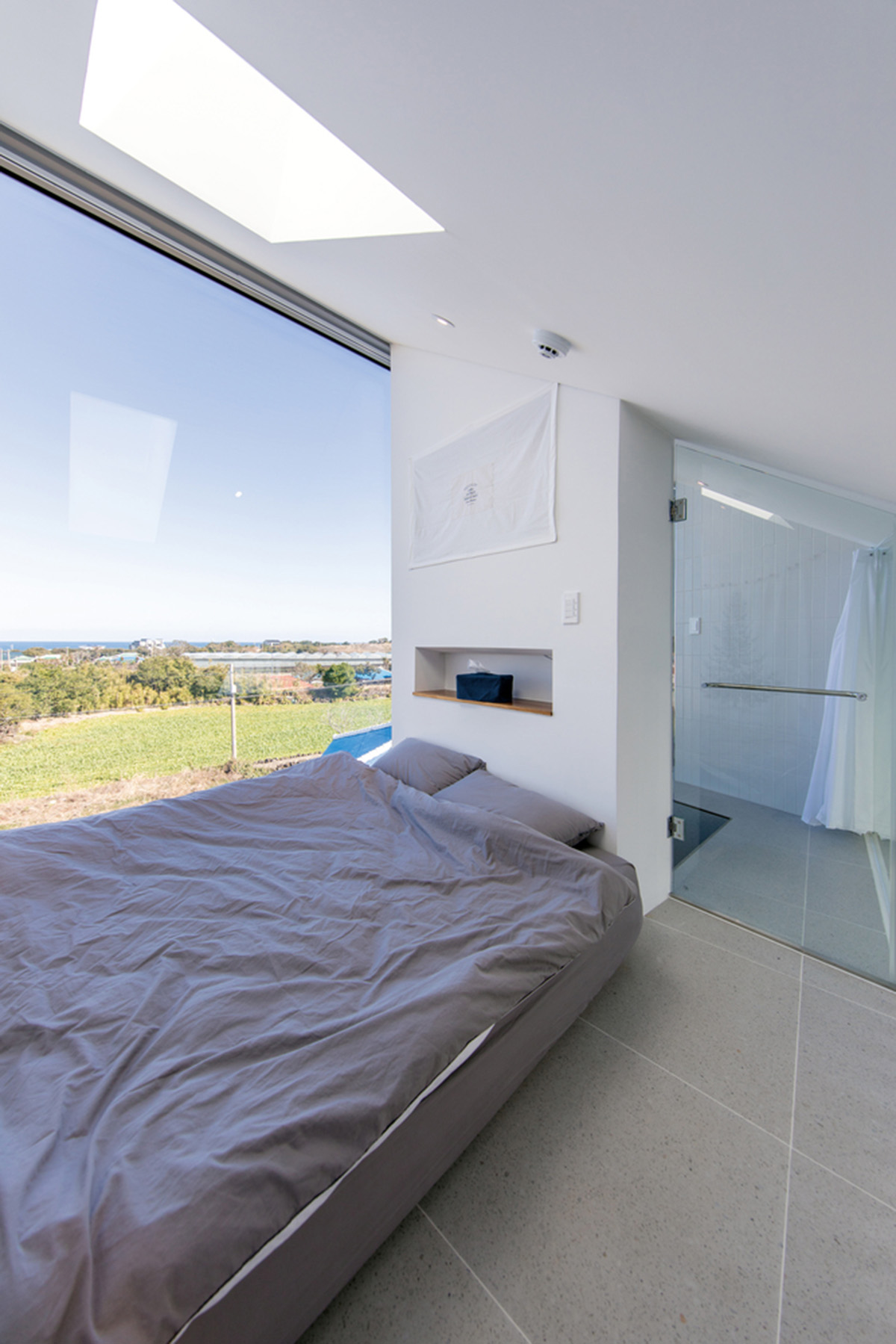 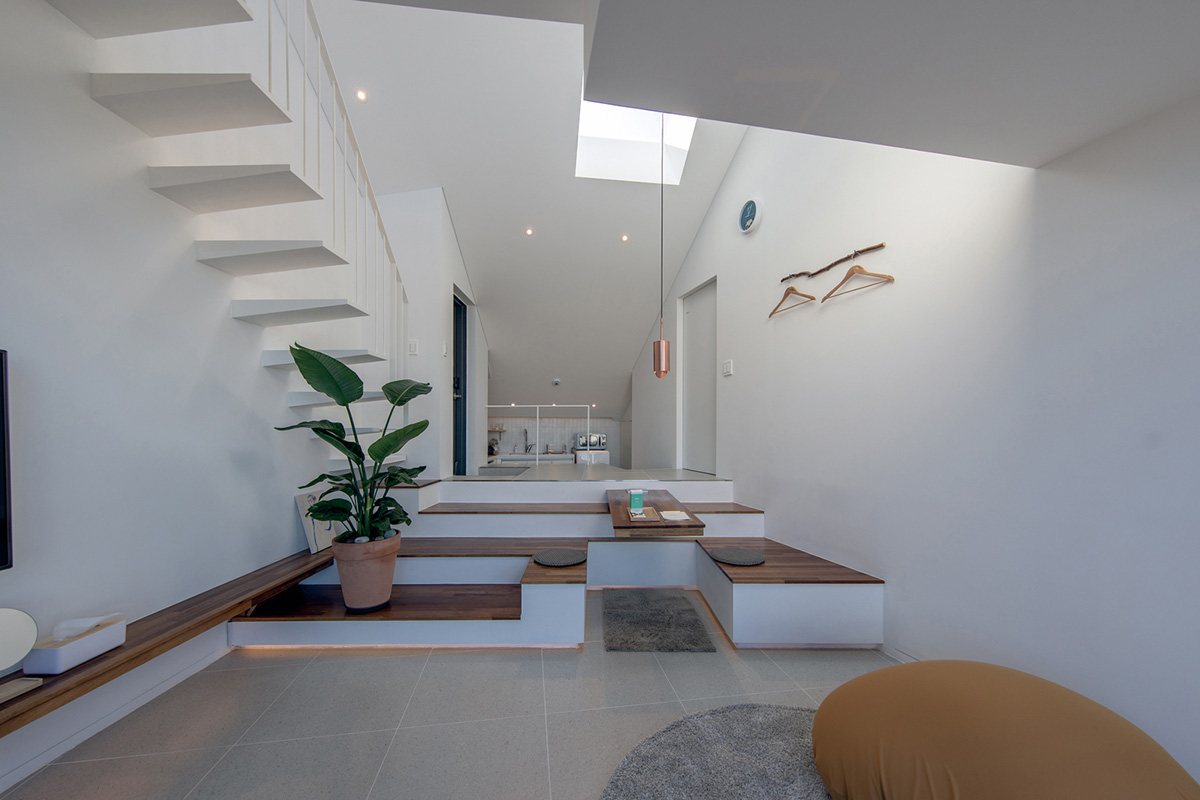 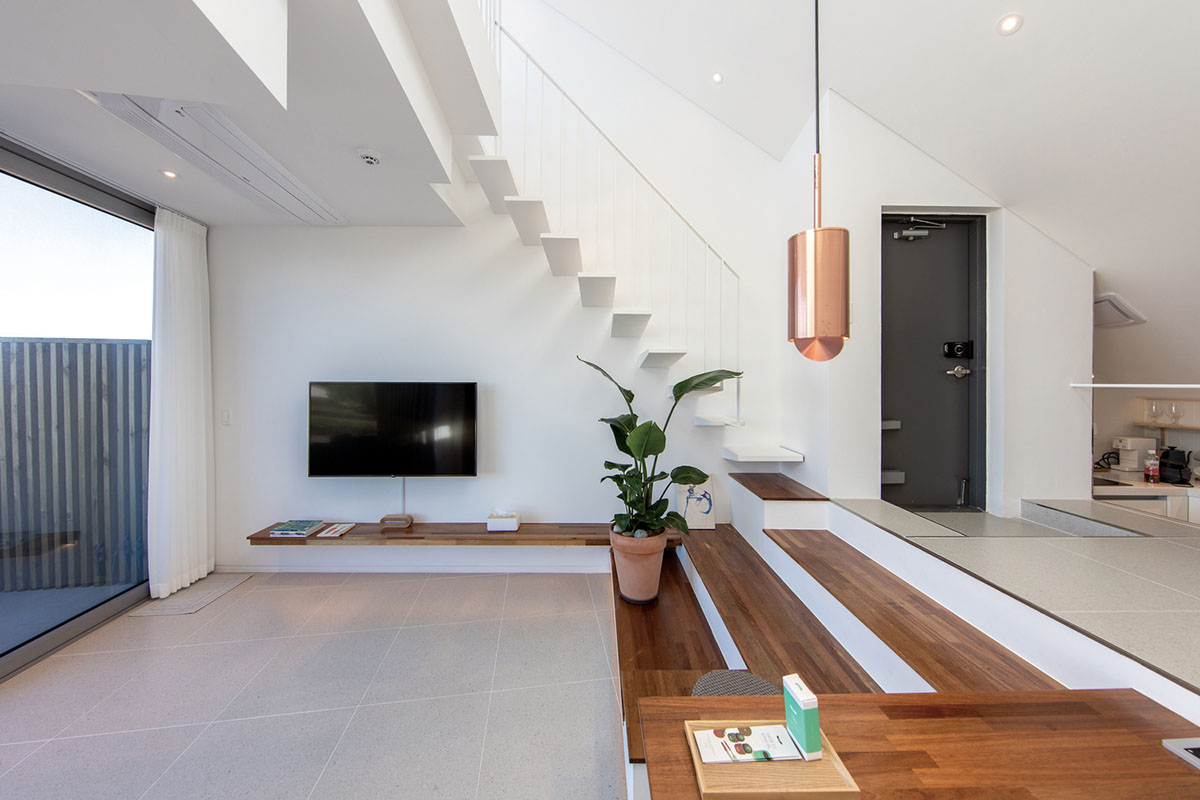 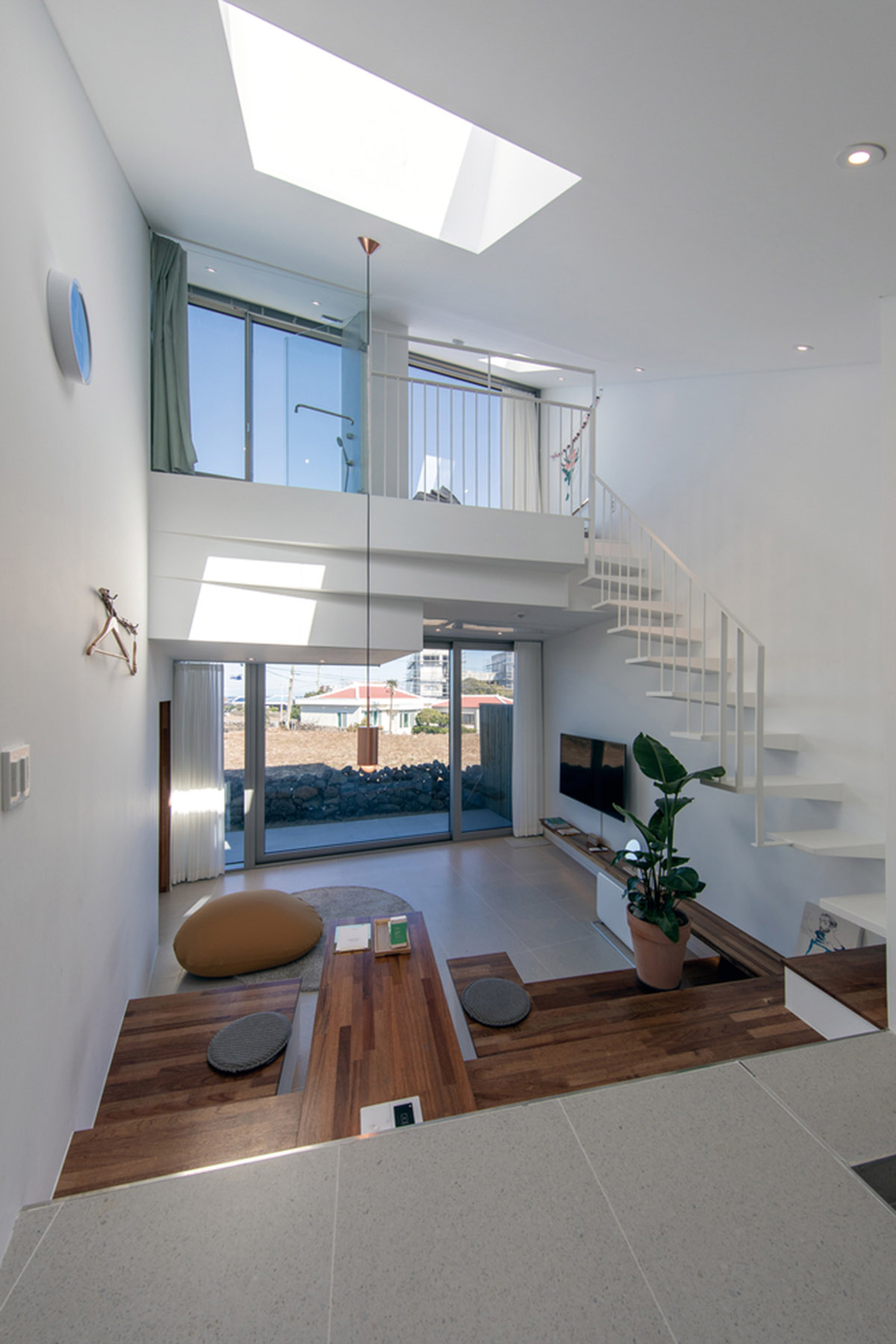 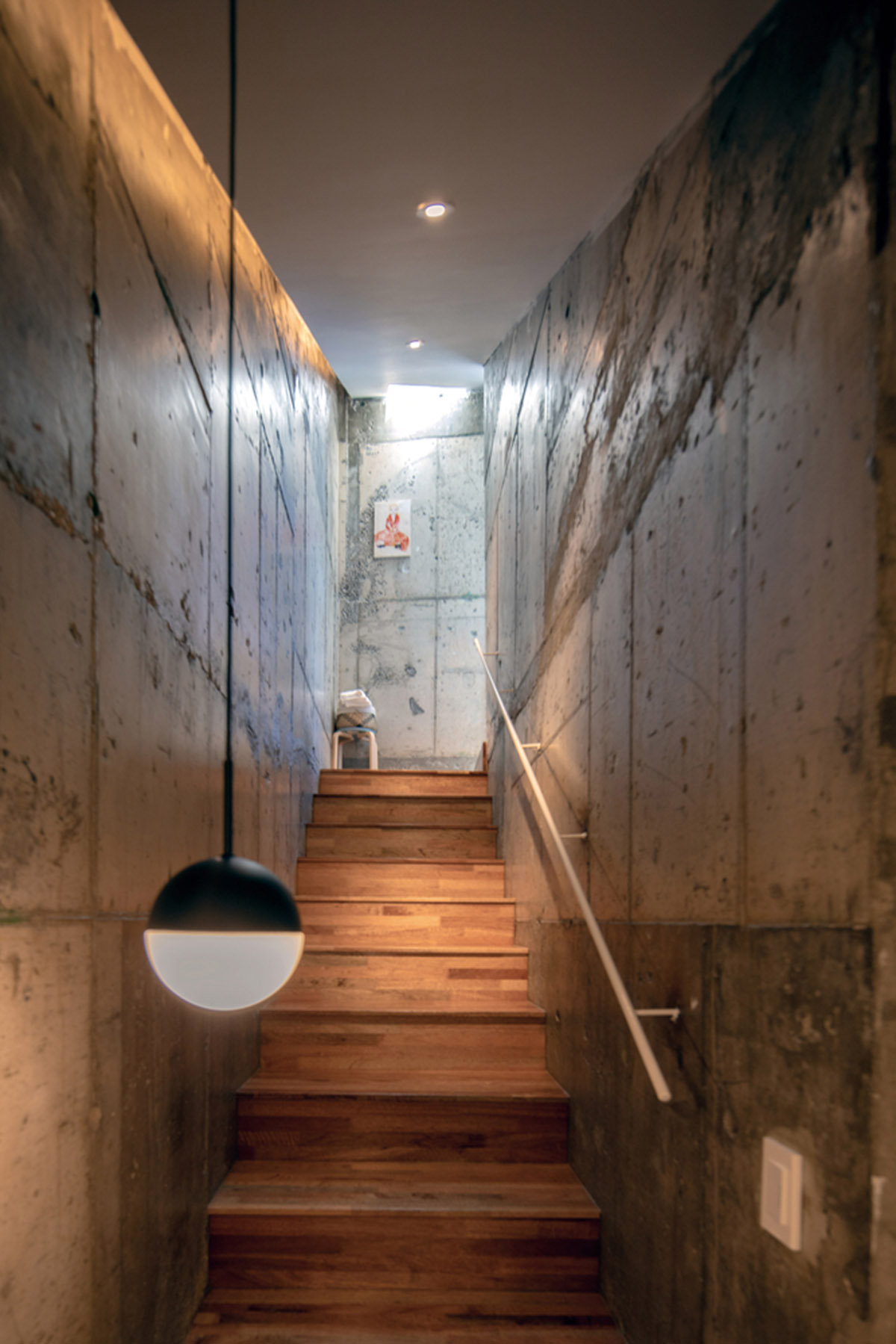 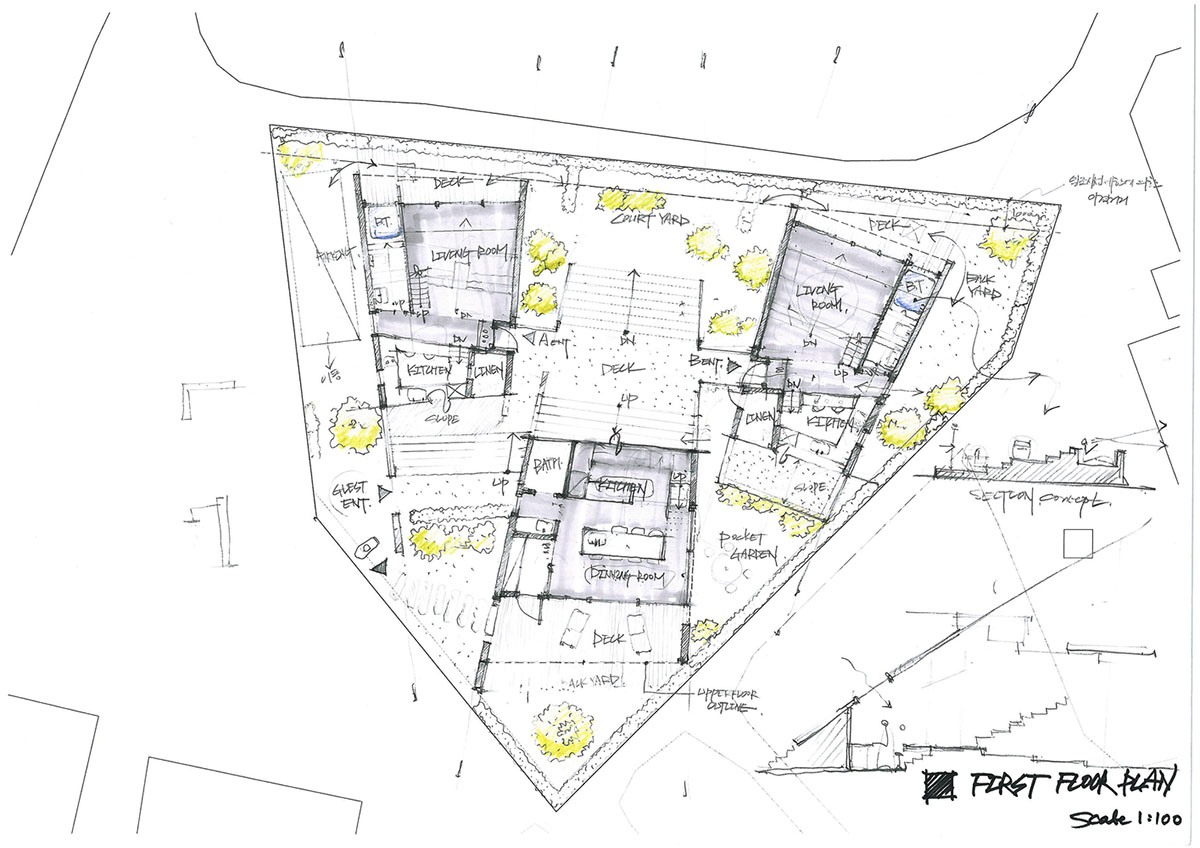 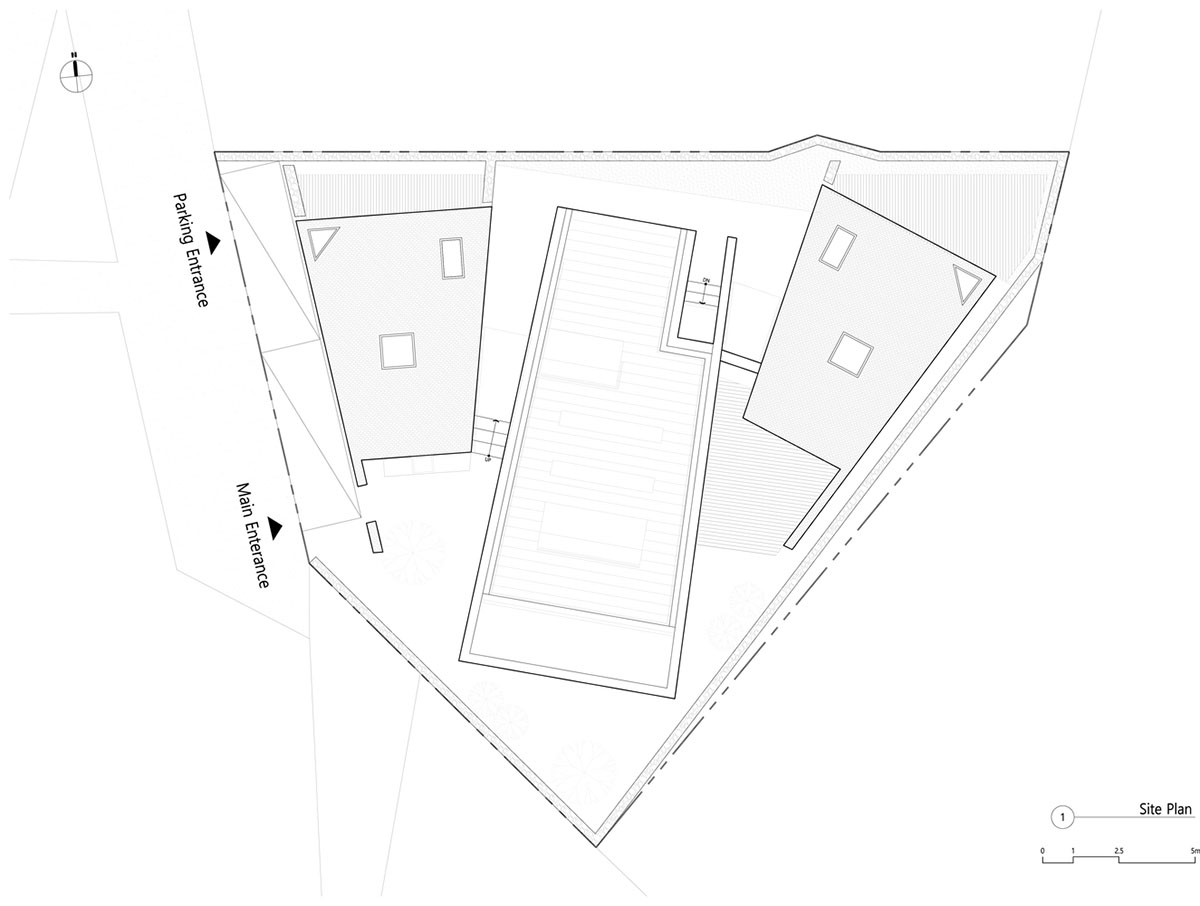 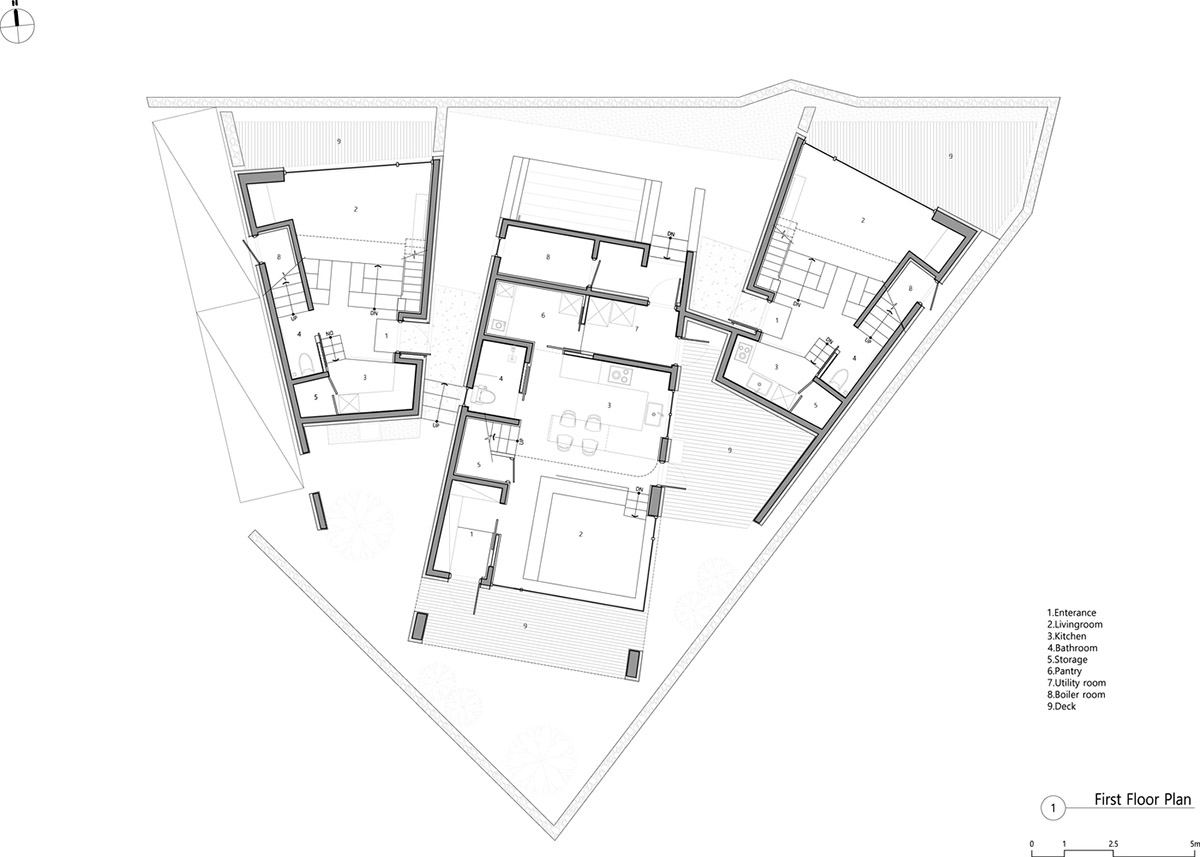 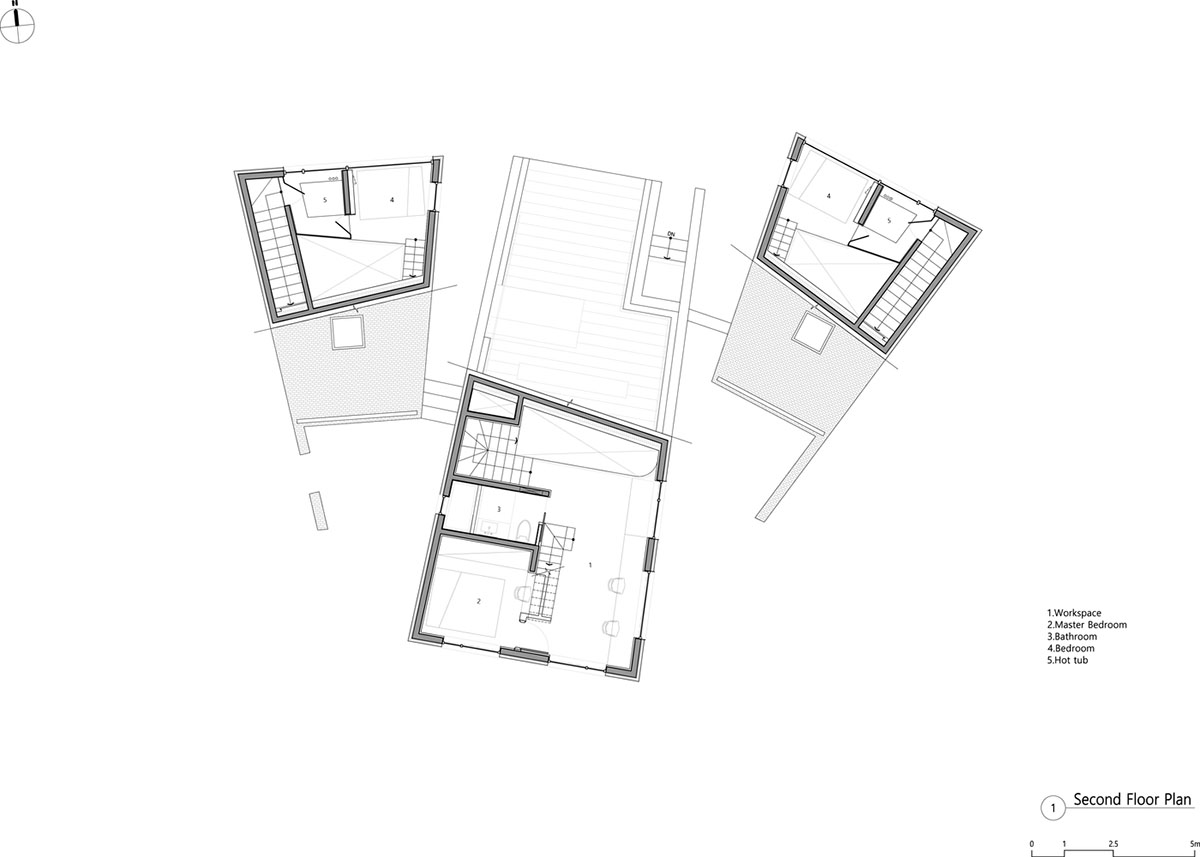 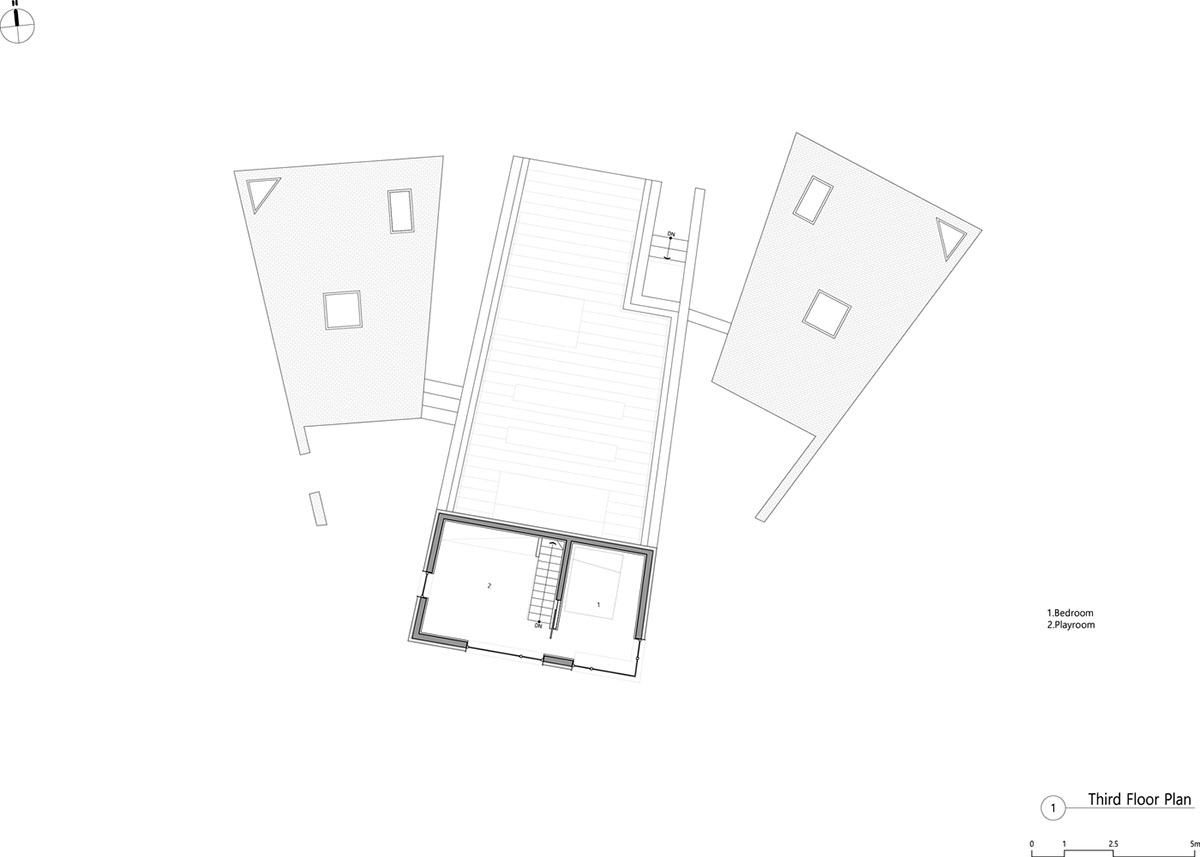 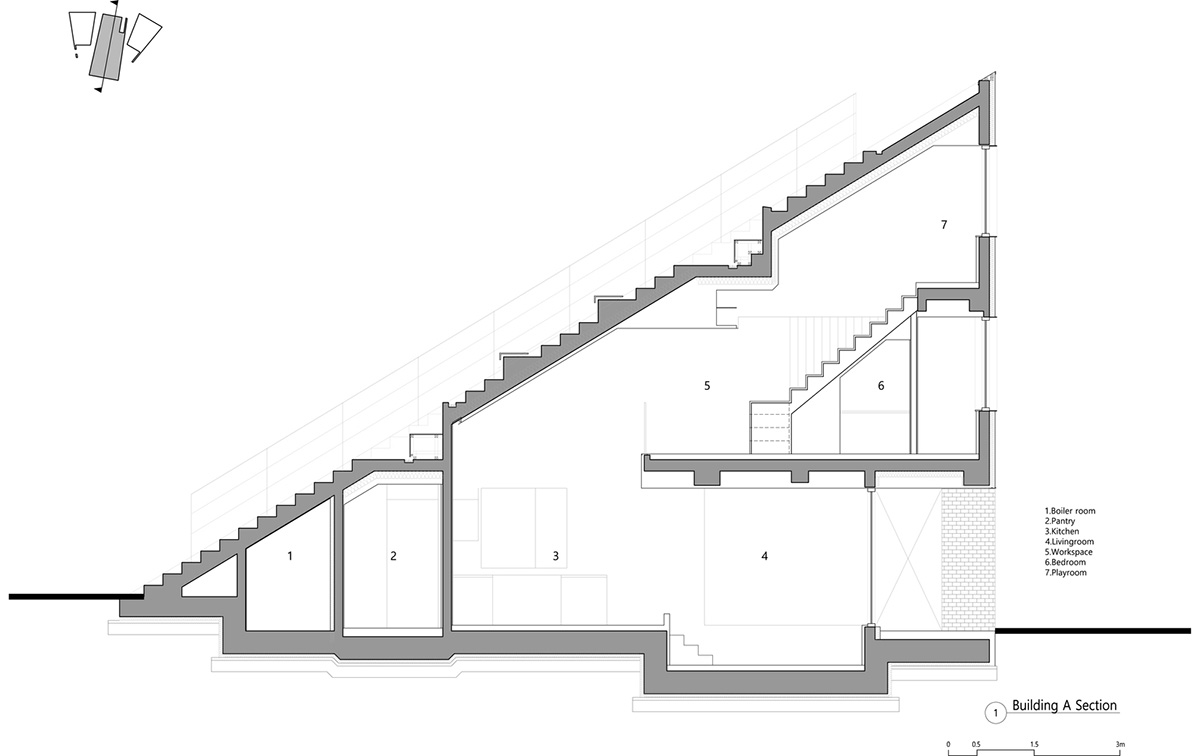 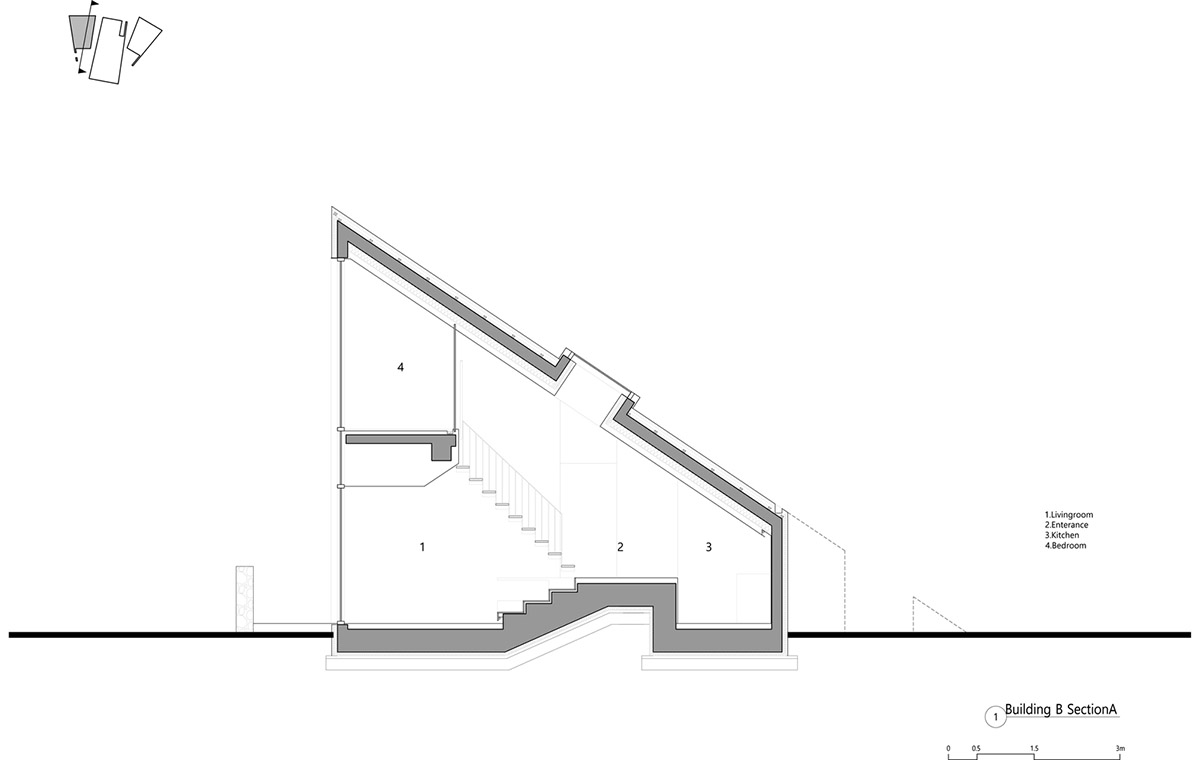 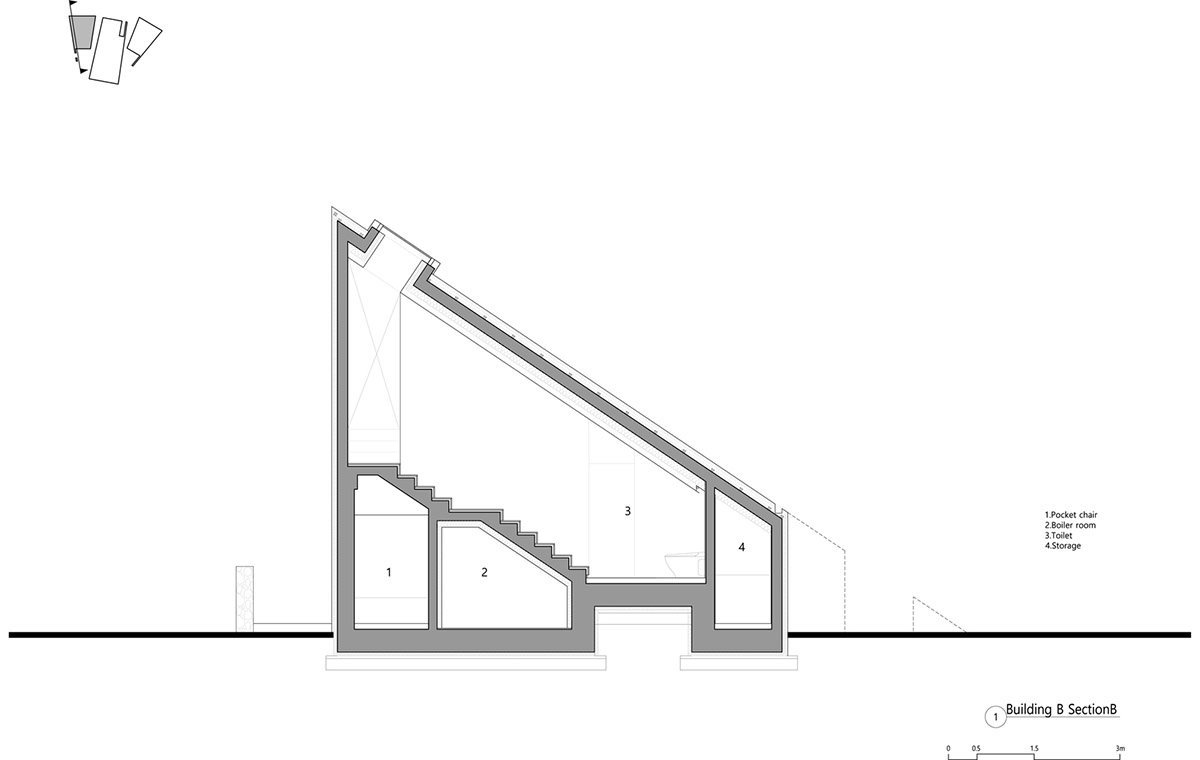 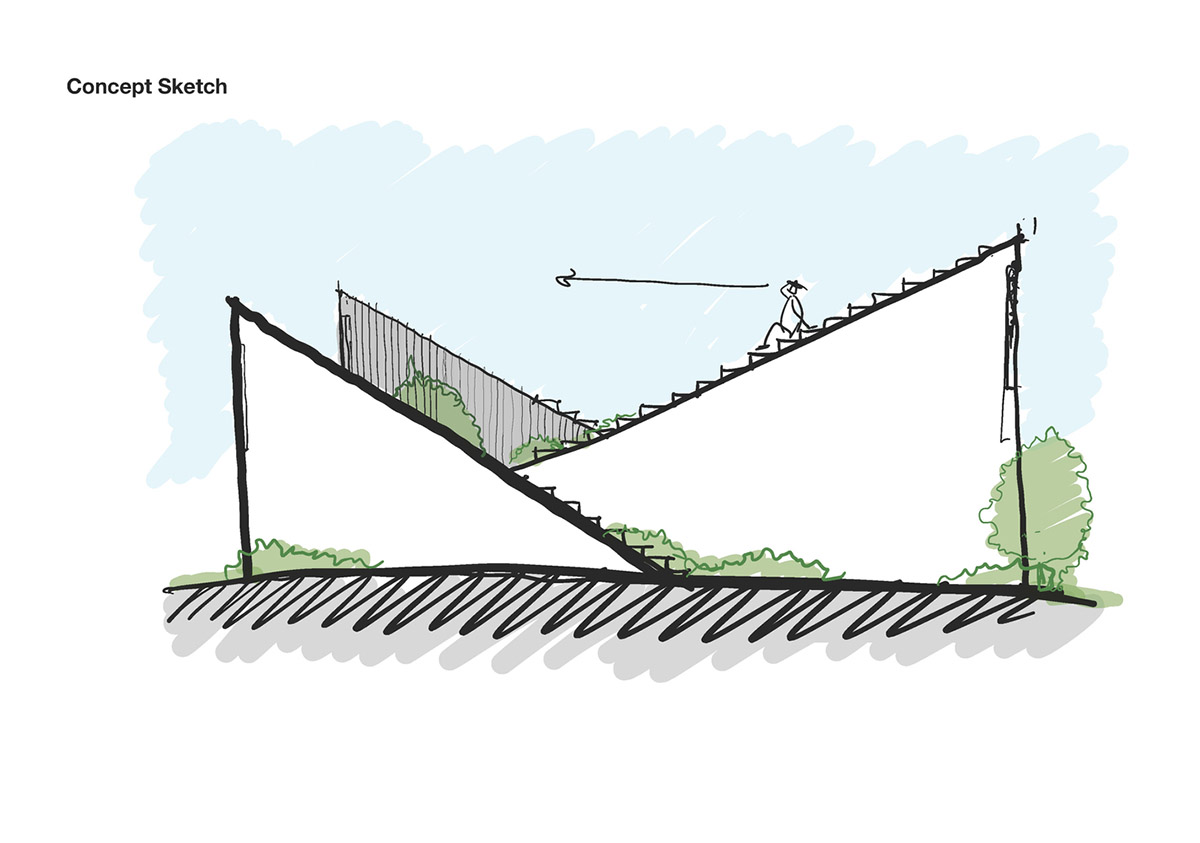 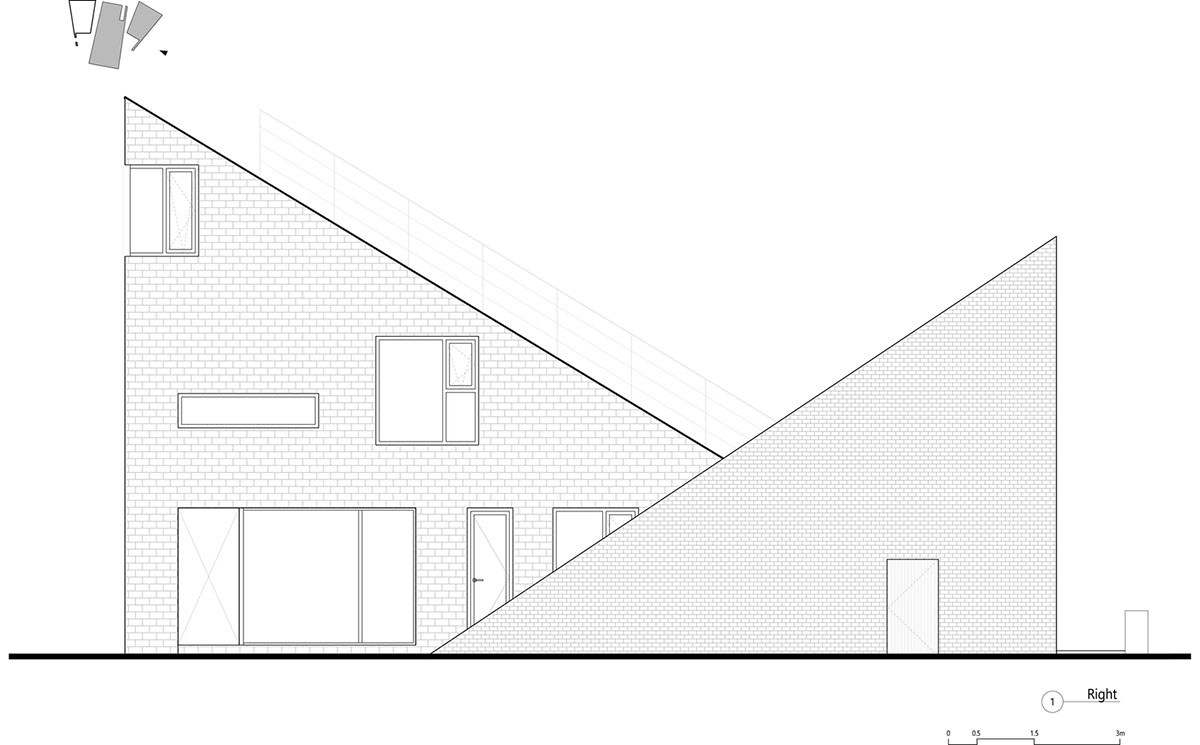 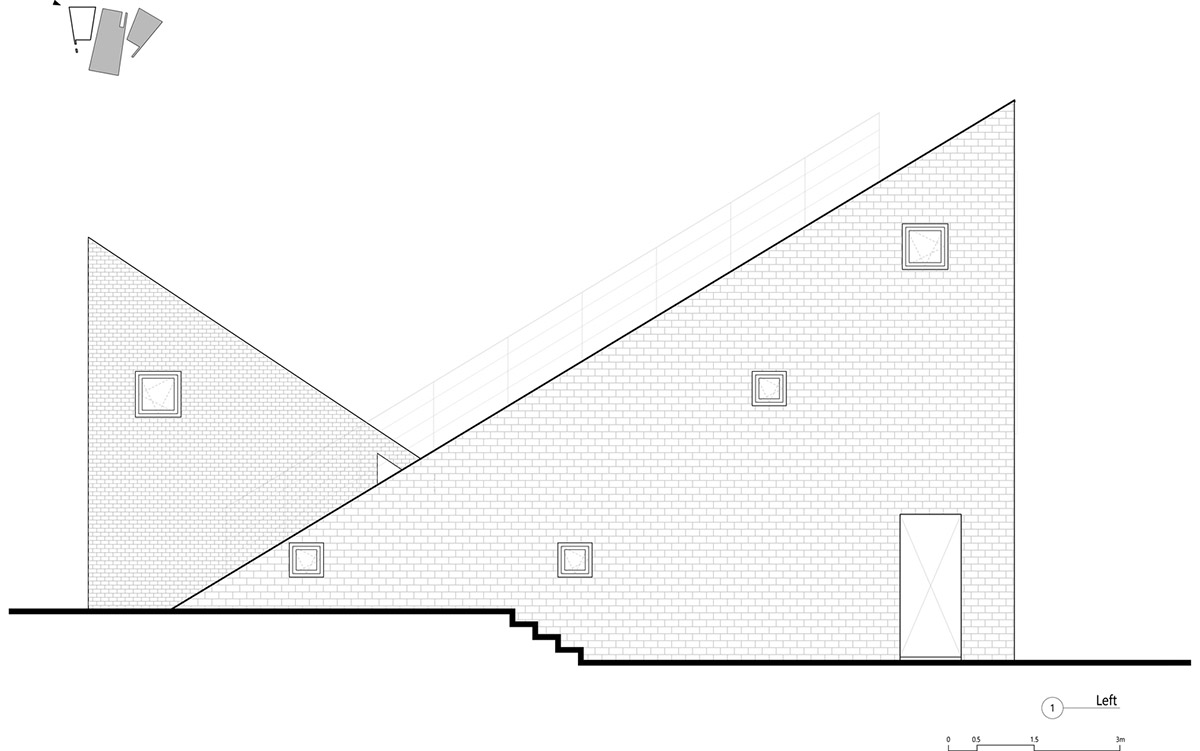 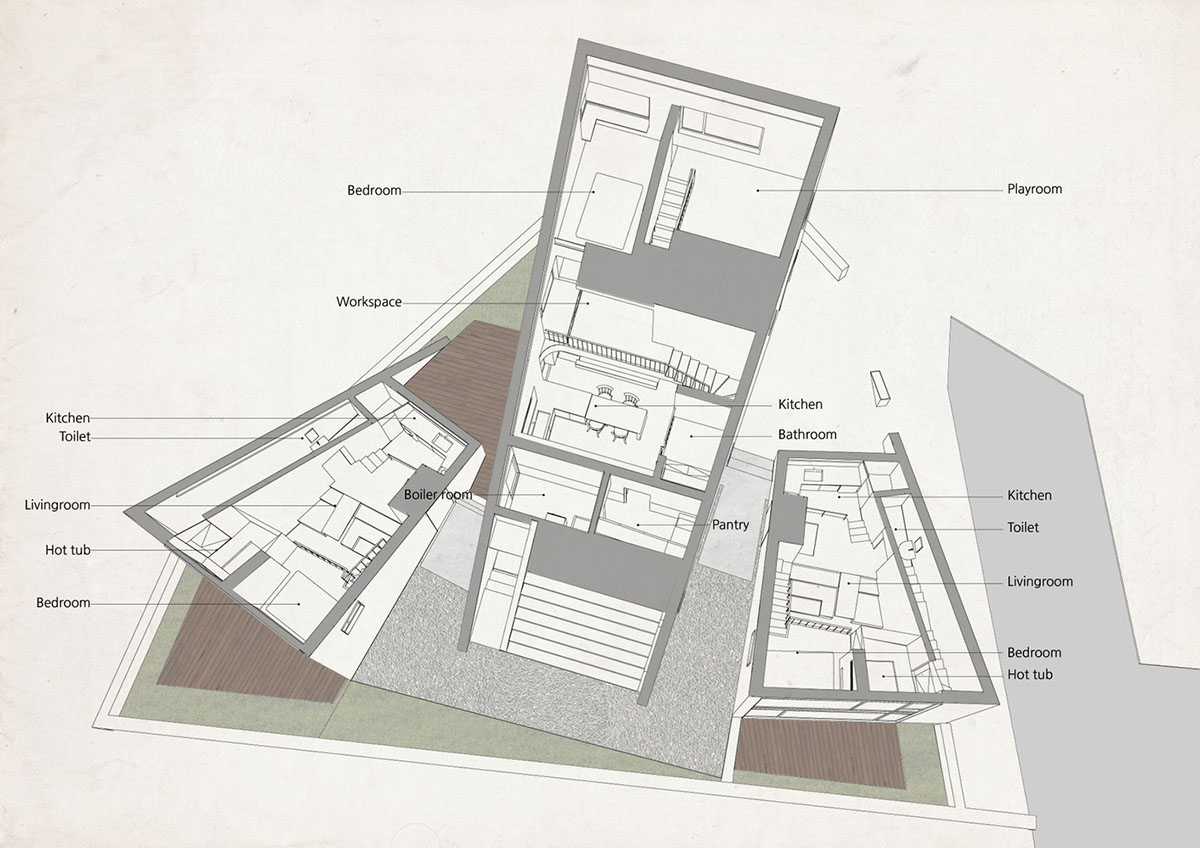