Making of a Place: Productive collision between a practice and a passionate community 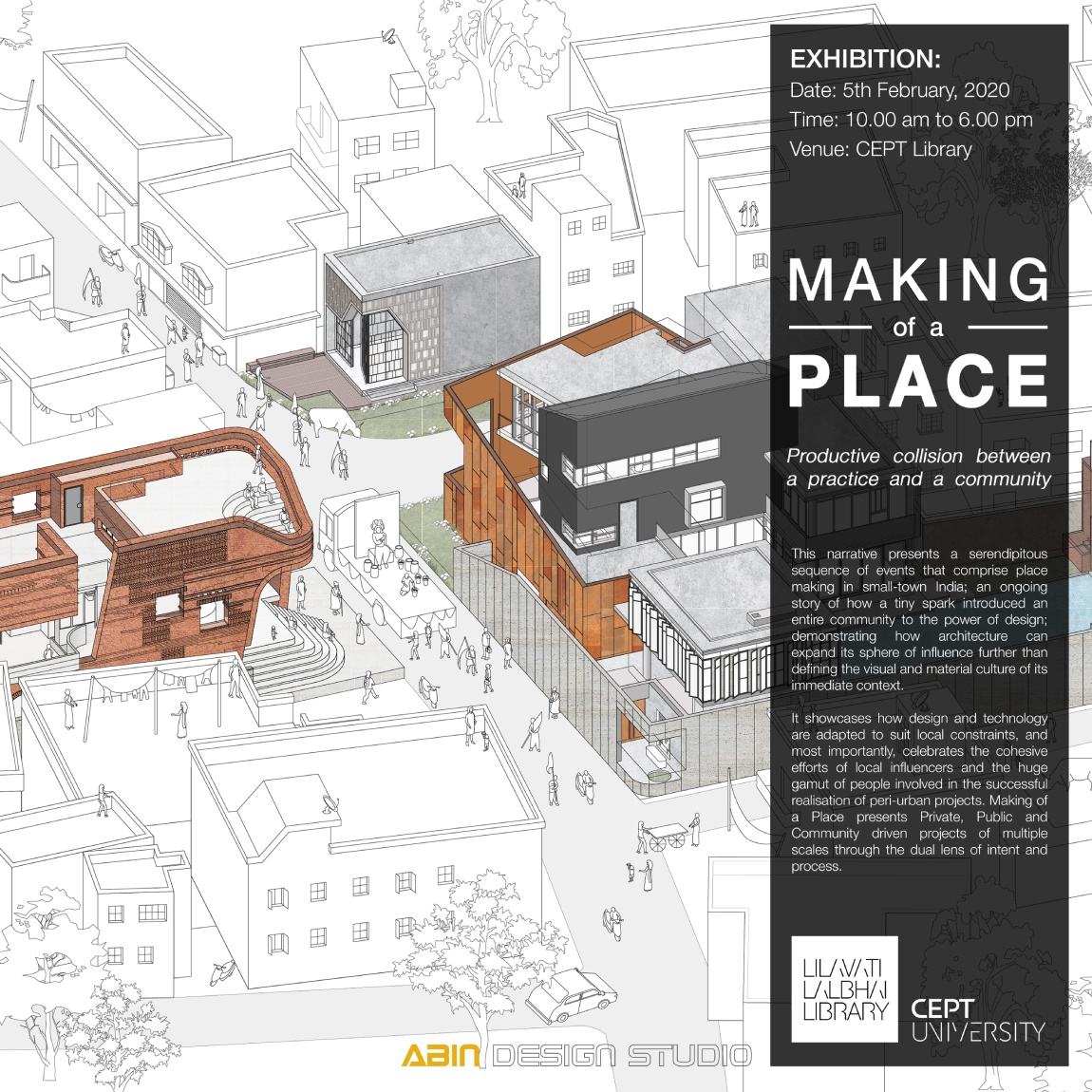 Details of the Event:

Name of the Event: Making of a Place & Landscape Urbanism

Status of the Event: On display since March, 2020. The exhibition was open to all till 30th March 2020. However the college had force shut down due to the pandemic attack in the country. This event shall again resume and the works will be on display as soon as the college reopens in July, 2020 or as per government notice.

Kolkata based architecture firm Abin Design Studio, headed by the award winning architect Ar. Abin Chaudhuri, quite well known for his extraordinary design methodology, is conducting an exhibition at the CEPT University in Ahmedabad known as 'Making of a Place: Productive collision between a practice and a passionate community'. The design studio has come forward to attract everyone in this great initiative of displaying their work by narrating an interesting storyline through a sequence of events that encompasses in defining any small place in a country like India. They try to explain how a small virtue of change through their out of the box design perspective in community development can instigate in altering the daily mainstream approach, further expanding its wings on how architecture acts as a virtue of alteration of thought process in the common people thus making them more aware of their surroundings. It opens up to  a visual retreat  providing vast exposure to local materials and our natural environment. 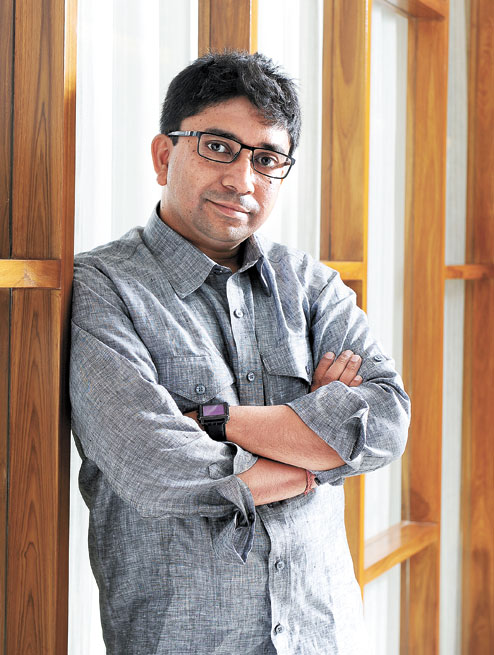 This designer along with his partner Ar. Jui Mallik and a niche team of architects and interior designers from the studio has come forward to bring a revolution in the conventional architectural industry with their incredible works and divergent techniques in designing a given space. Making of a Place presents Private, Public and Community driven projects of multiple scales combined altogether in sequence to narrate a story for the viewers thus creating a great impact on them.

His works that are displayed in the sequence are as follows:

1. Of Places and People:

The 'Bamboo Pavilion', one of his first design for a famous 'Kartik Puja' festival in his hometown Bansberia located in the city of joy Kolkata, West Bengal, India. This is an internationally recognized and award winning project which was made for the local community to uplift the inherent culture of Bengal. It was recognized by the Museum of Modern Art, New York and was showcased in their publication and travelling exhibition, 'Uneven Growth, 2014'. Popularly known as the 'Pool House', this unique residence was made in Abhishaptagram in Hooghly district, West Bengal India. This contemporary design was one of its kind in the entire neighborhood which earned him a lot of appreciation from the owner and the local people in that place. This comprises of a pool, gym, guest house and a vast lawn thus changing the overall perspective further amalgamating posh way of living in an peri-urban area. 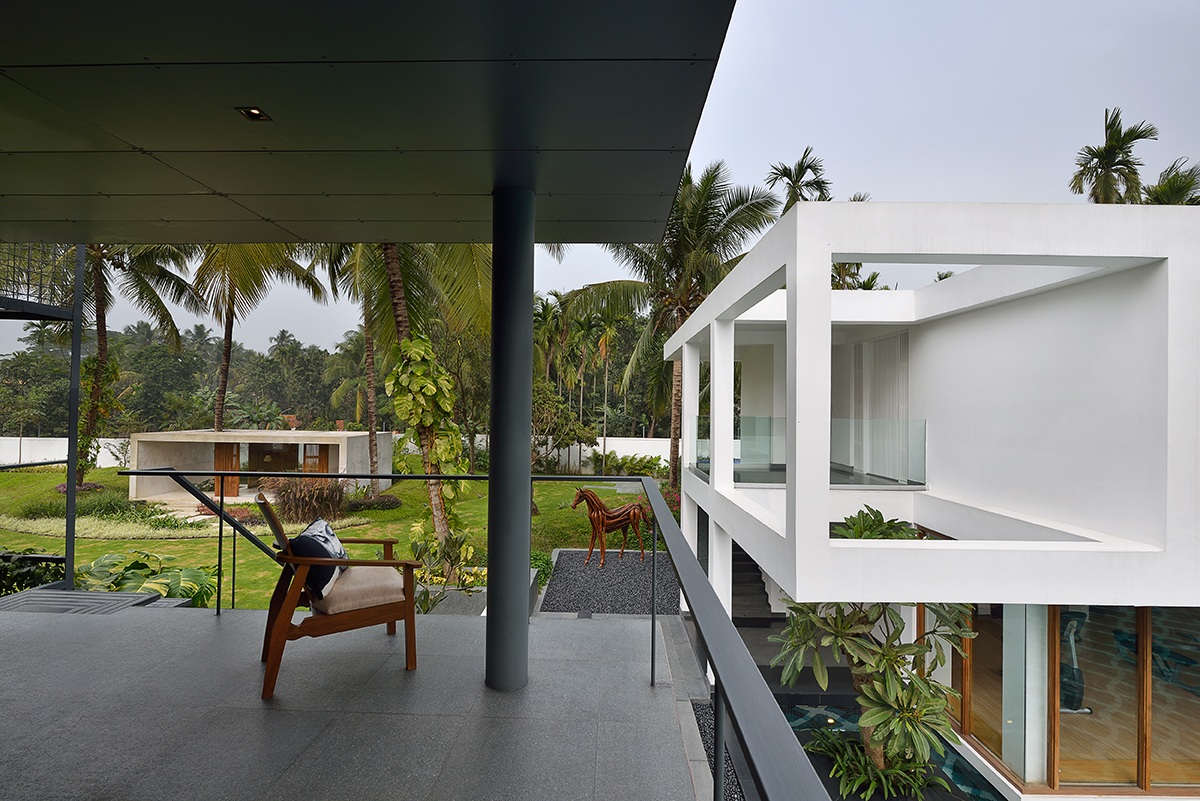 The designer  always had an emotional attachment towards the common people and his working labors and craftsmen. Quite satisfied and inspired by  one of the woodworkers who helped him in constructing the Pool House, Abin Chaudhuri felt the need to do something for the community. Thus he made  a workshop and material research unit which would provide a backbone for exploratory and execution works taken up by Abin Design Studio. 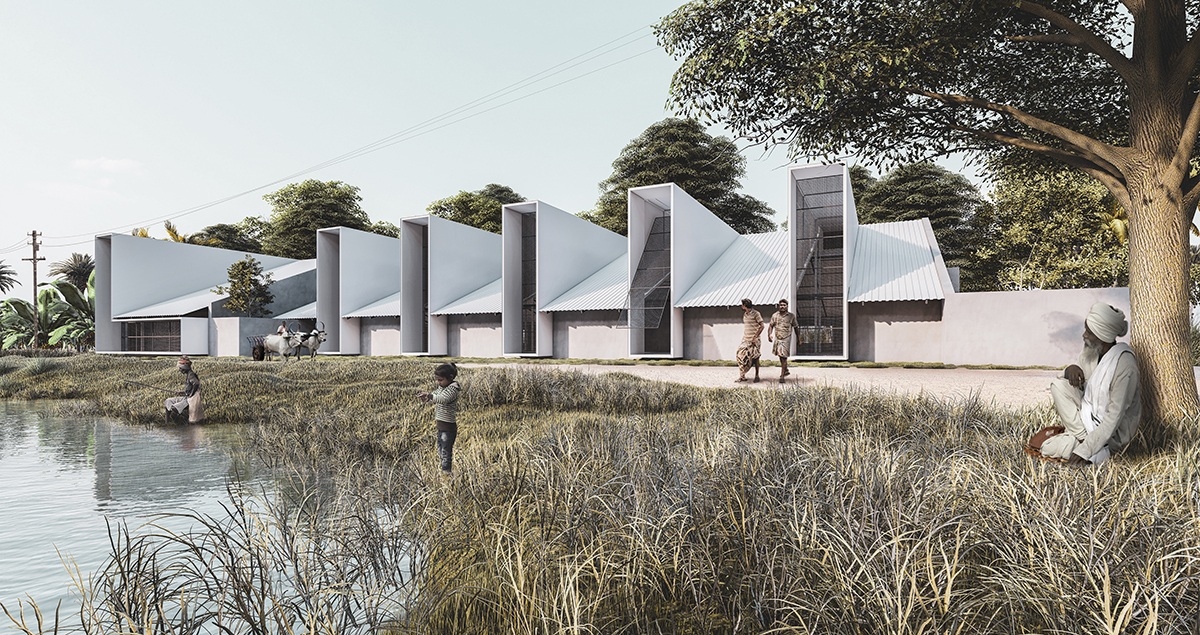 The Pavilion of Canopies was designed to bring forward a co-active relation of man with the forest. The Pandal design for the famous 'Kartik Puja' festival made a new approach by concentrating on the paradigm shift in the audience psychology where there was more want in knowing the back end concept of the design and just not the installation as a whole. 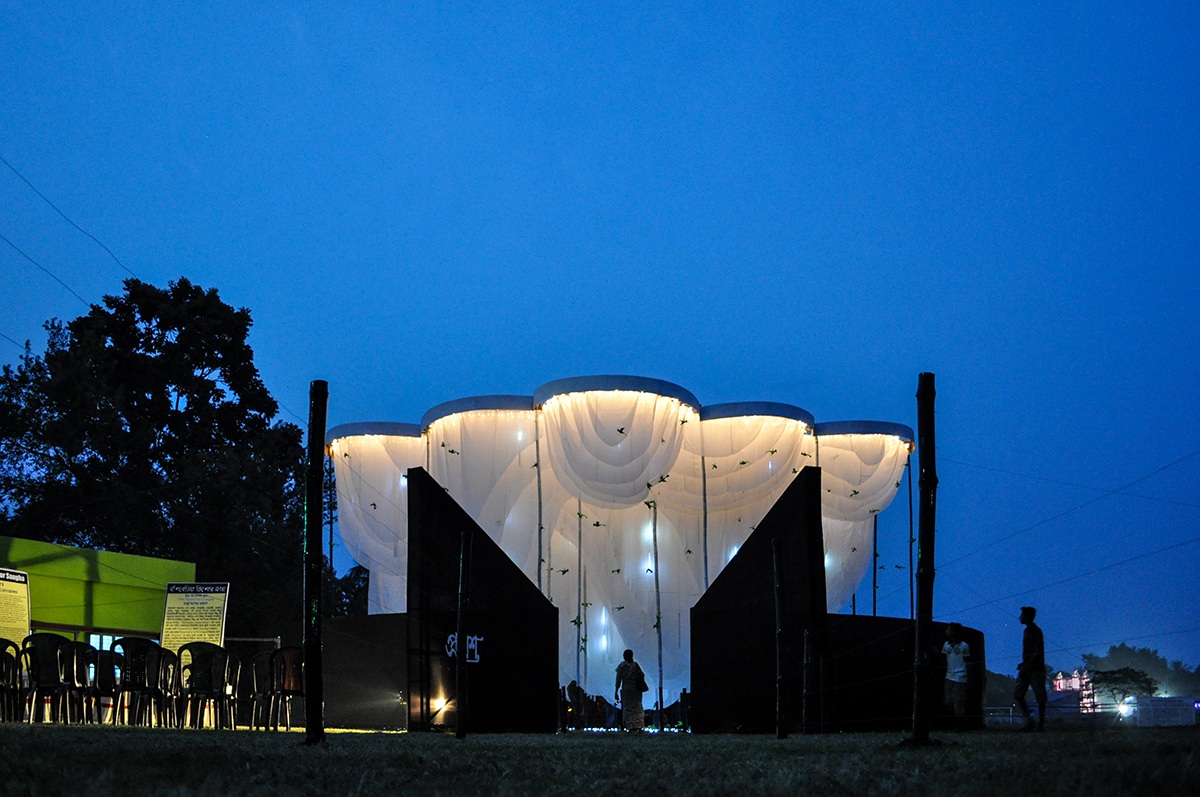 The House of Sweeping Shadows is one of their biggest stepping stone where the team has come up with an yet new challenge altogether. An existing small shell of a two-storey building had raised quite a tough situation which was built in the prevailing style by the local mansion. The need of the client was a whole new contemporary building though he was not in favor of dismantling it as a whole due to sentimental issue. Thus the design met technology. The  composition of masses was brought in light with sleek and straight crafted metal extension with soft verdant. The hue was kept dark amidst the open blue sky and picturesque landscape at the background. The main play was done with light which the designer used it as an accessory to uplift the character of the building. Thus, the house of 'sweeping shadow'. 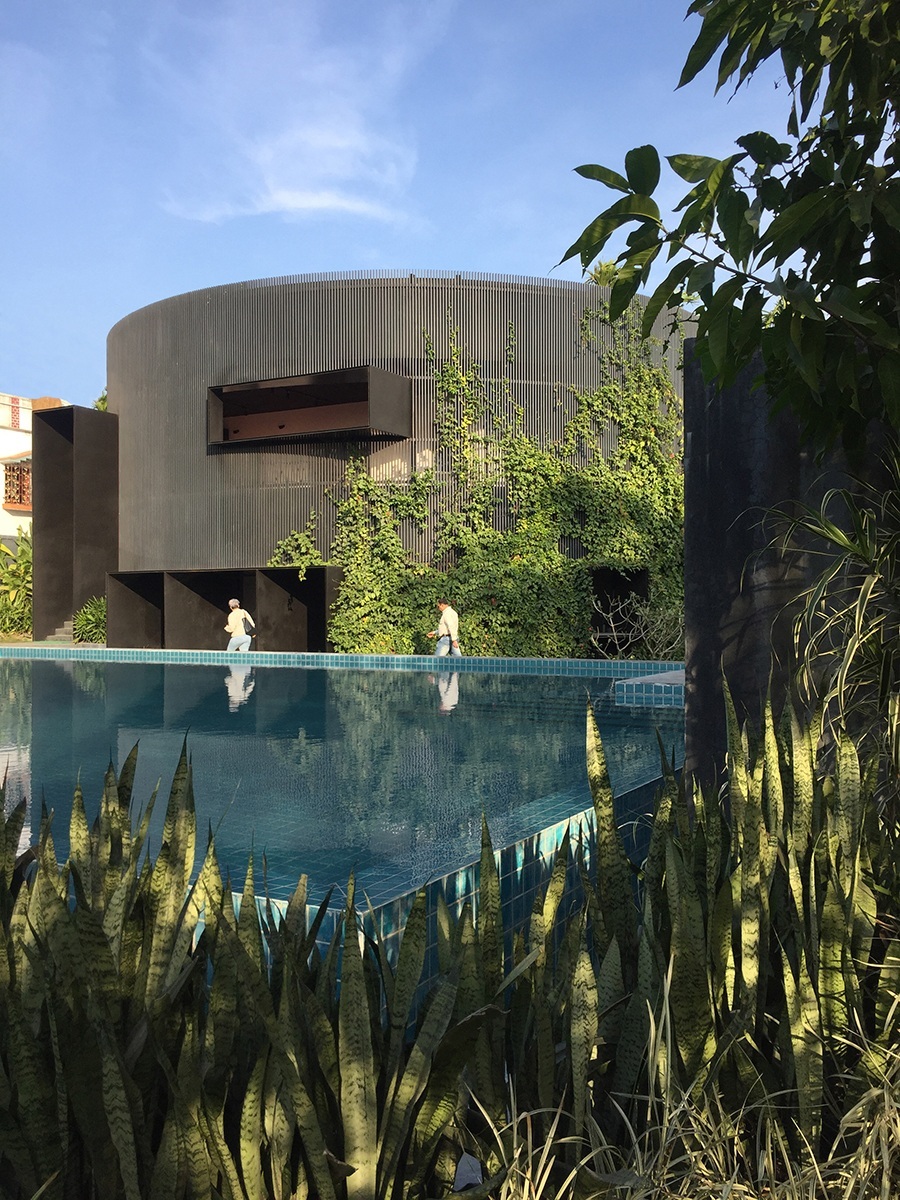 A gentleman after visiting the Pool house and the House of sweeping shadows wanted his abode to be designed by this young designer amidst a congested intersection in Bansberia. The main requirement of the client was that of a 12-foot tall boundary wall to maintain enclosure and privacy for security reason. Creating a massive wall would lead to a disaster at the conjunction of the busy street. Thus the designer convinced the client that the wall shall be only placed at the corner and allow clear sight lines around the turn to showcase the massive exposed texture of the house which was marvelously designed with a space outside the wall was landscaped with low-height shrubbery as a vibrant enhancement of the pavement. The idea of this minimalist design approach was to merge with the wall into the design of the House as whole. The house also has a massive courtyard overlooking a beautifully designed landscape. That's the story of the famous 'Wall House'. 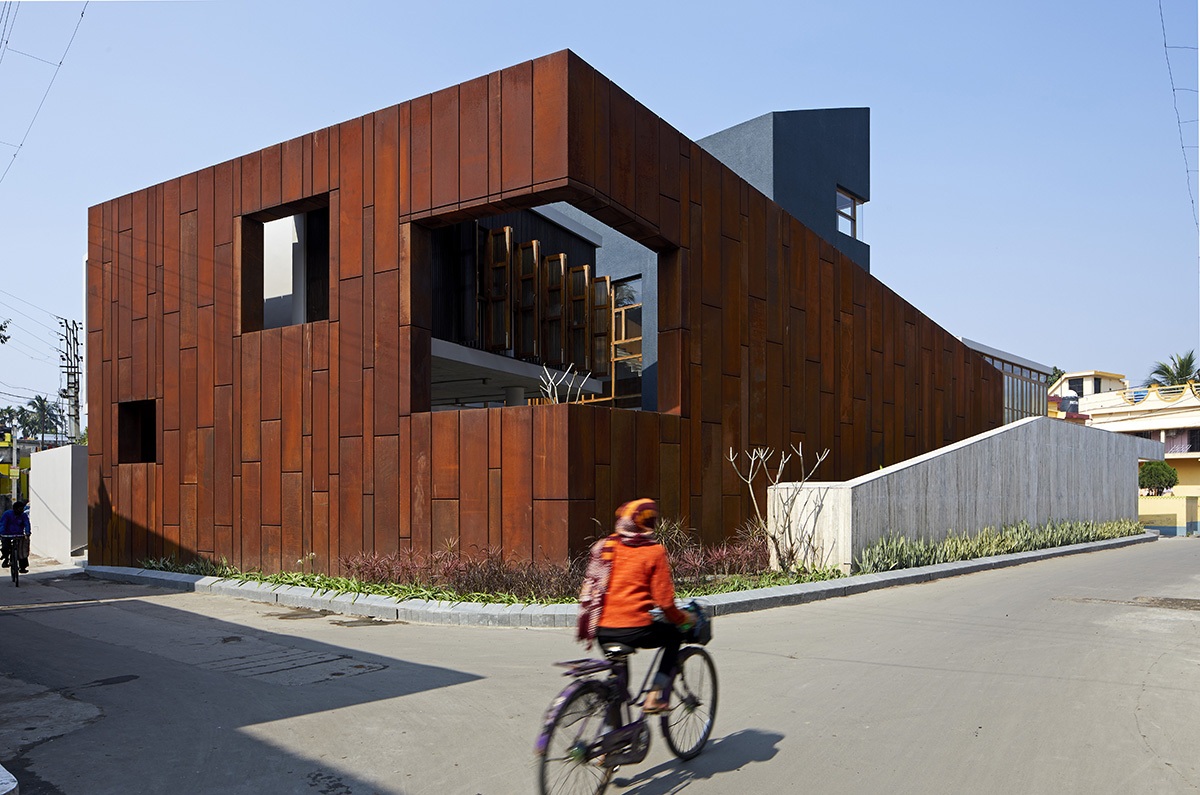 Abin Chaudhuri has always been the designer for the community and has an extremely unfolding emotion for his hometown. A sports enthusiast designer came forward to shape the Waterfront Clubhouse at Bansberia, Kolkata. The club house structure was an outward symbol of culture and community recreation where children and adults alike come together to join hands and play together in the vast field. The design was kept very minimalist and clean at the edges to give an appealing look altogether which was overlooking a massive water body. 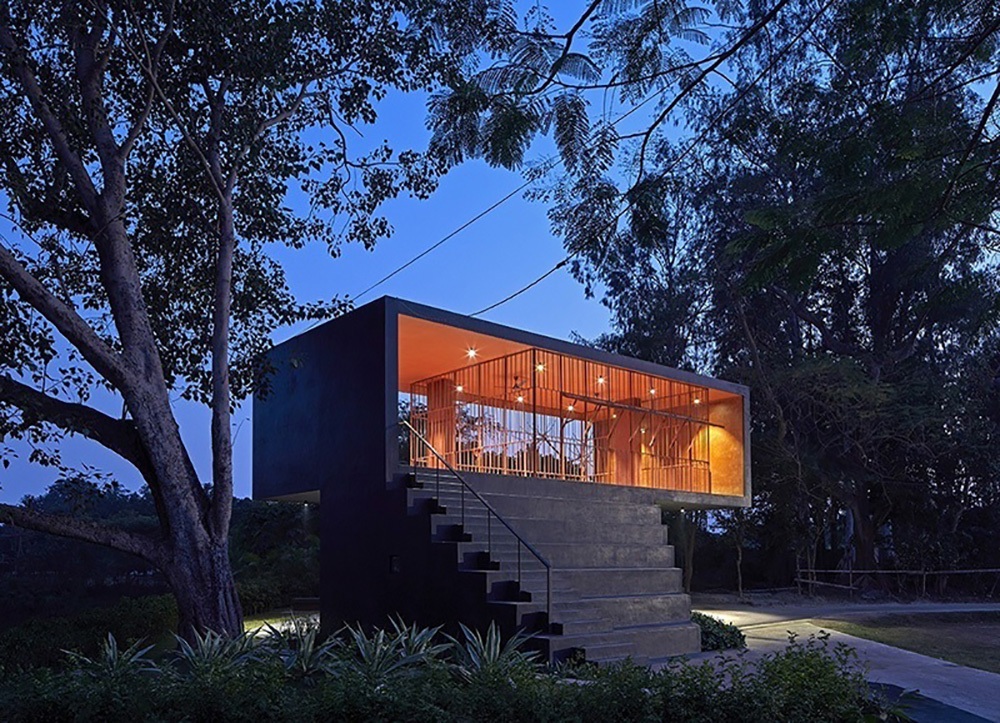 When simplicity meets innovation, a miracle is created. This is exactly happened when the designer took a leap into a government project in collaboration with the region's Panchayat. The Adisapagram Society Hall is an auditorium designed for private and public events. With a very constraint budget the designer decided to use only locally available material in order to construct the building. It is scheduled to be completed in 2020. 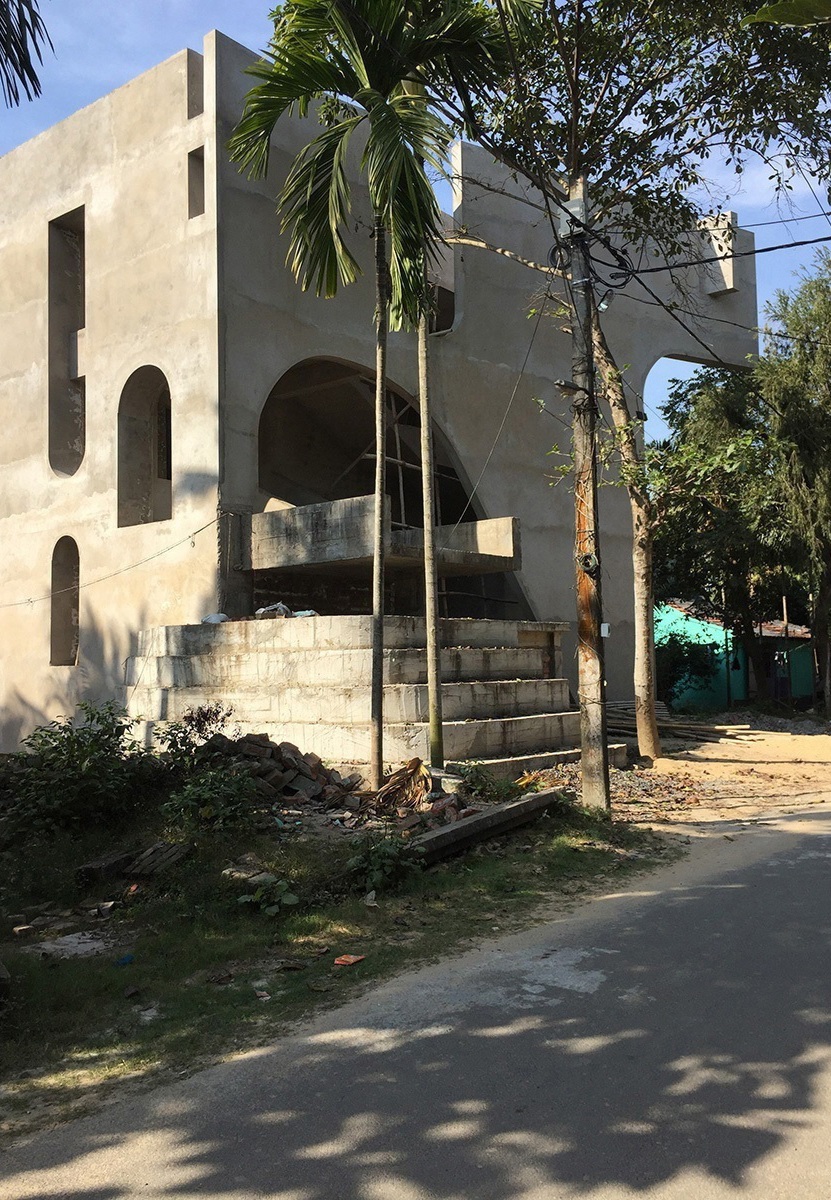 The warmth that the designer received after his famous Wall house was commendable. His generosity and the love for the community fetched him a project of religious importance and that's when the 'Thakur Dalan' came into the picture. Though immense sentiment was involved as restructuring of the building was not in the picture. However, the designer didn't try to alter it either instead his proposal and the final outcome somehow matched the demand of the niche community of Bansberia. Immense funding was poured from influential organisation. This place became an abode of religious activity in the community. 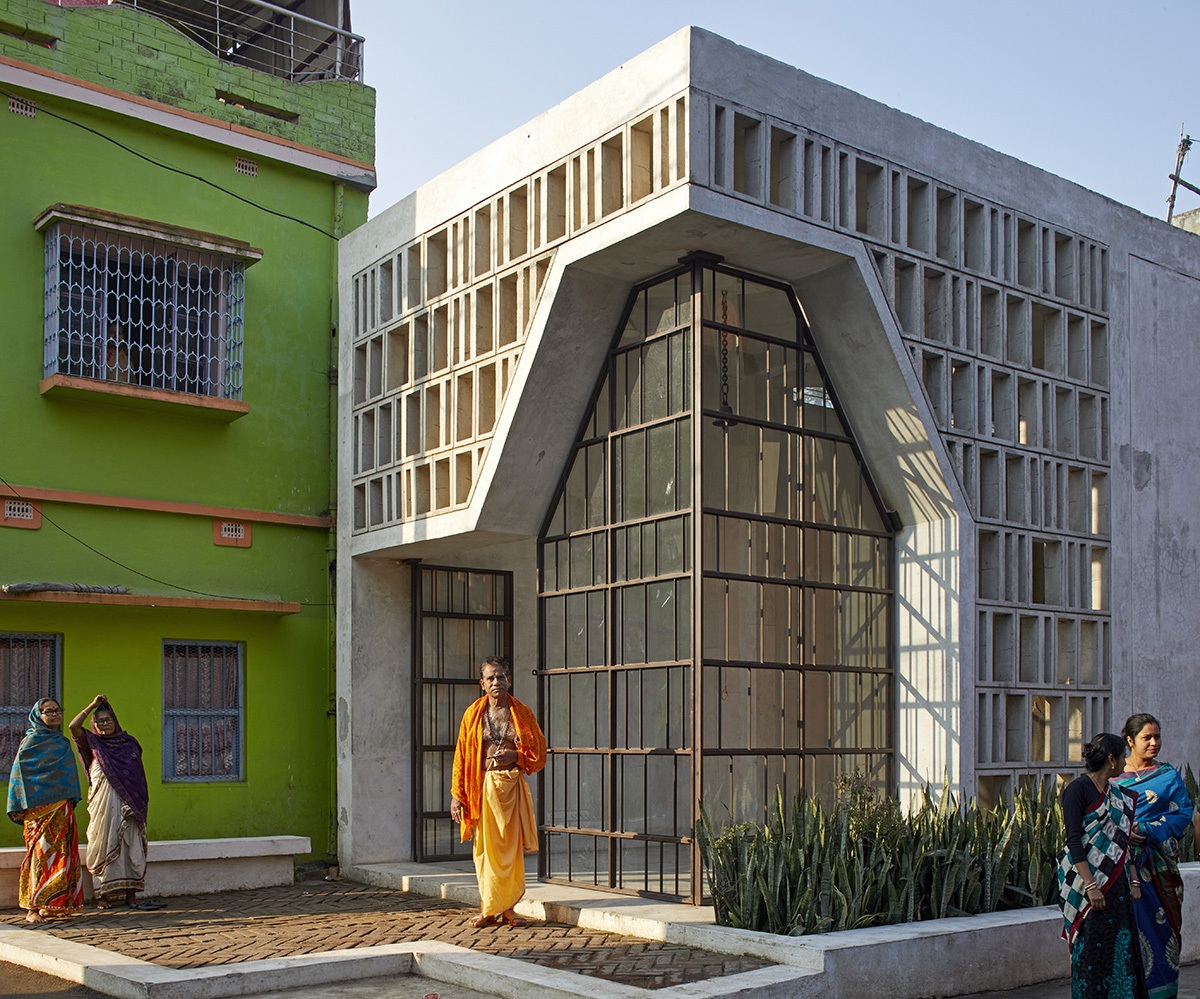 Initially marked as a plot for a garage of the Wall House Client, the designer somehow influenced him to use it for multipurpose utility and for the community. That is when the idea of Gallery House emerged. The plan was done as such that it was a garage on the ground level and a multipurpose activity space such as yoga class and tuition center etc on the upper level for the neighbourhood. Inspired by the Bengal architecture form, the designer brought a new approach in this building by using terra-cotta tiles. He took cues from the typical Bengal Style temple and designed it with exposed masonry walls inlaid with ceramic blocks further amalgamating it with modern architecture and typical regional style. m his home as a parking lot for his vehicles. ADS was appointed to make a simple garage, but convinced the client with their usual creative approach to use this opportunity for the public community and give it back to them. That's how the Gallery House was made. 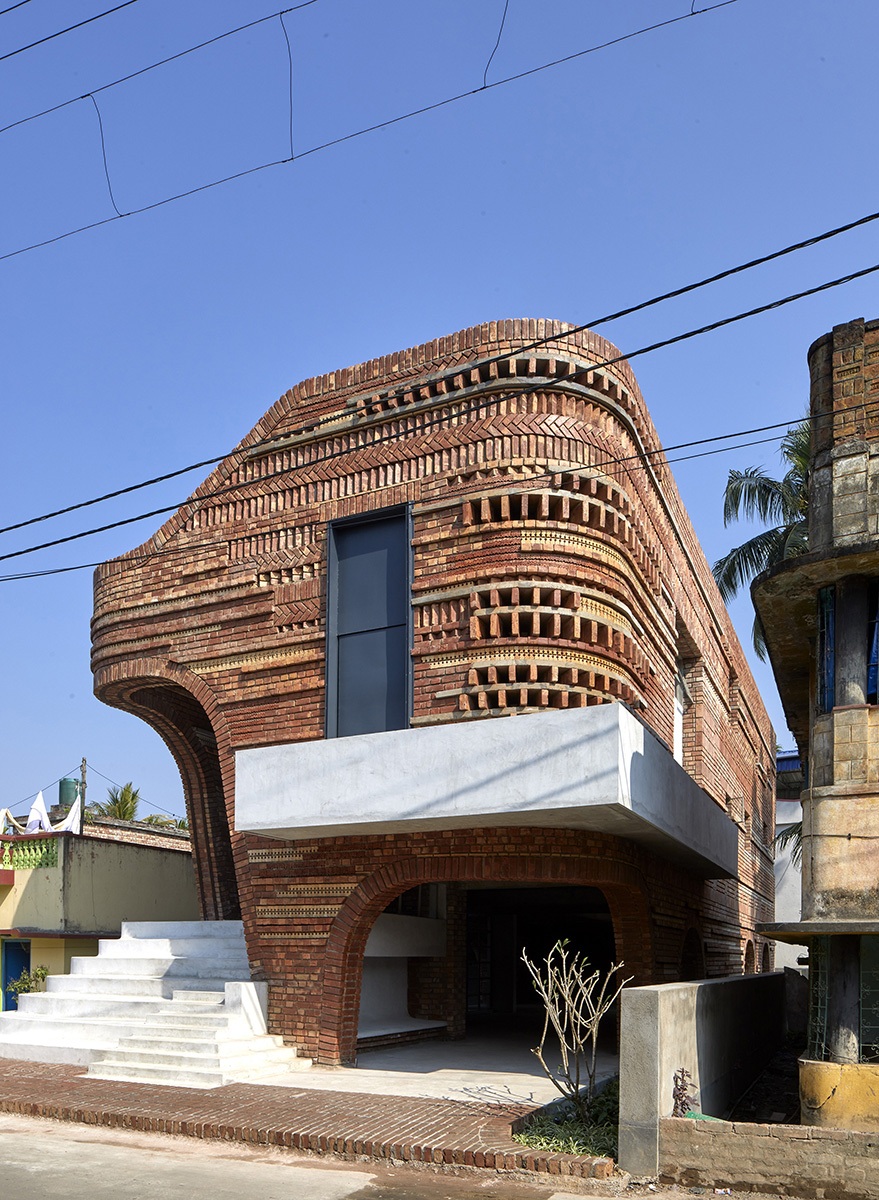 With these projects all interlinked with each other, the designer completes his narration of his personal journey by sharing his story of how he succeeds in framing a fusion between a architectural practice and community development for his followers. Inspiring every young architects to follow his path, he paves a trail by co-relating most of his remarked and brilliant works. His humble approach and simple form of designs attract a lot of attention and has led him to be one of the Top 50 Architects of this country and a lot many international awards and recognition. He still believes he has miles to walk and a thousand to inspire and work for. He invites each one of you to walk along with him and his team in their path of infinity in designing a space. All the images courtesy of Abin Design Studio, Kolkata, India