Stefano Boeri Architetti, Metrogramma Milano and Inside Outside Enliven the Parco del Ponte in Genoa 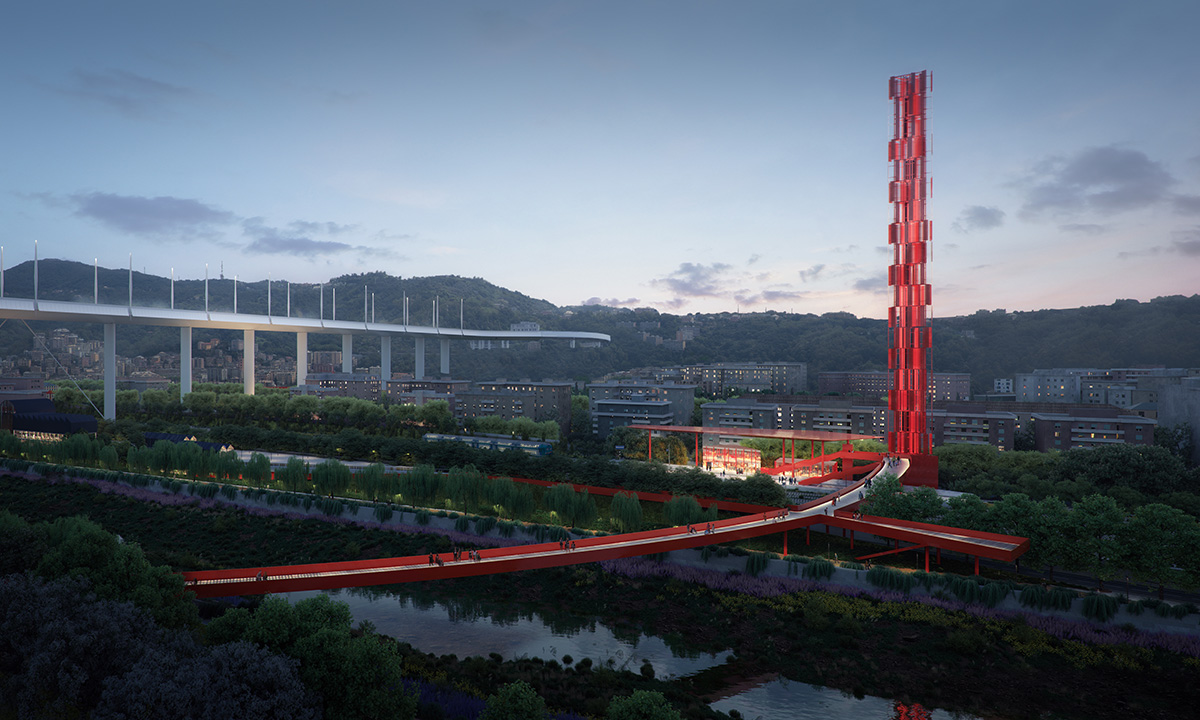 Three proposals breathe new life into the late Morandi Bridge area of Polcevera Valley in Genoa, Italy. An urban scale landscape project, invited by a competition, the proposals put together "The Polcevera Park and The Red Circle". The project is a system of parks making an ecological mix, underneath Renzo Piano's new bridge proposal for the valley. 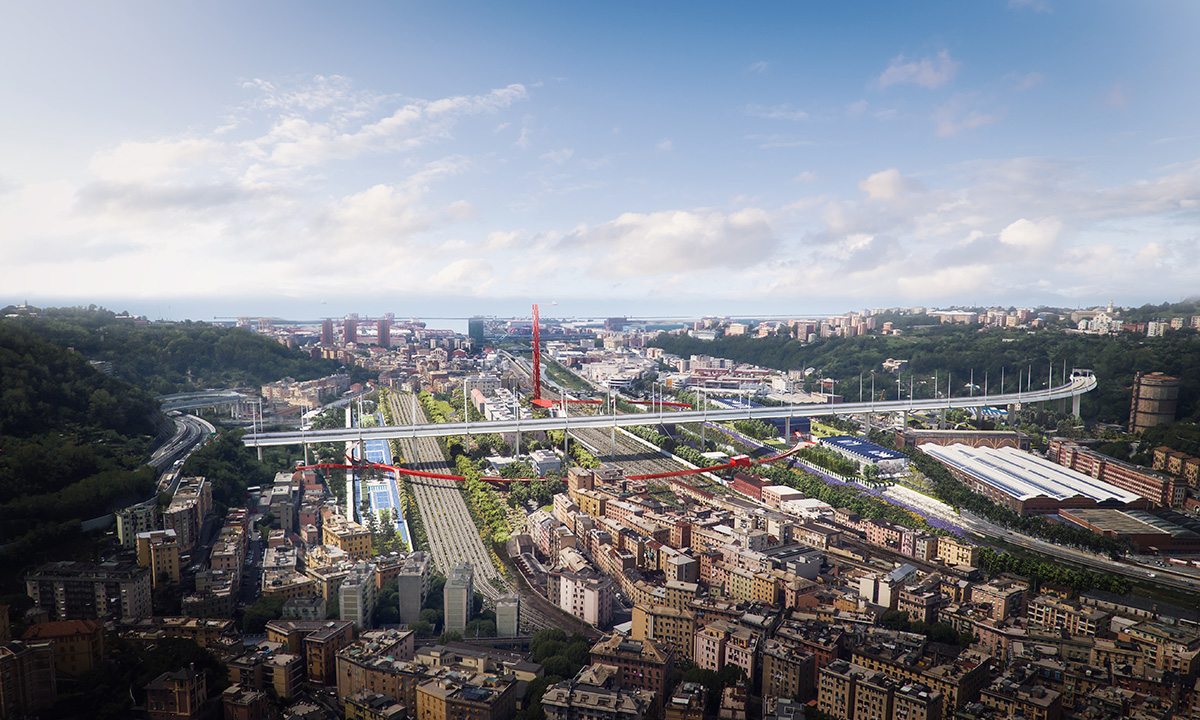 The Red Circle is a long diameter pedestrian bridge that walks you across the valley's breadth and stitches a panoramic view from above, enabling mental mapping of the landscape. This pedestrian bridge is anchored by the tower pinnacling a view point in the city. 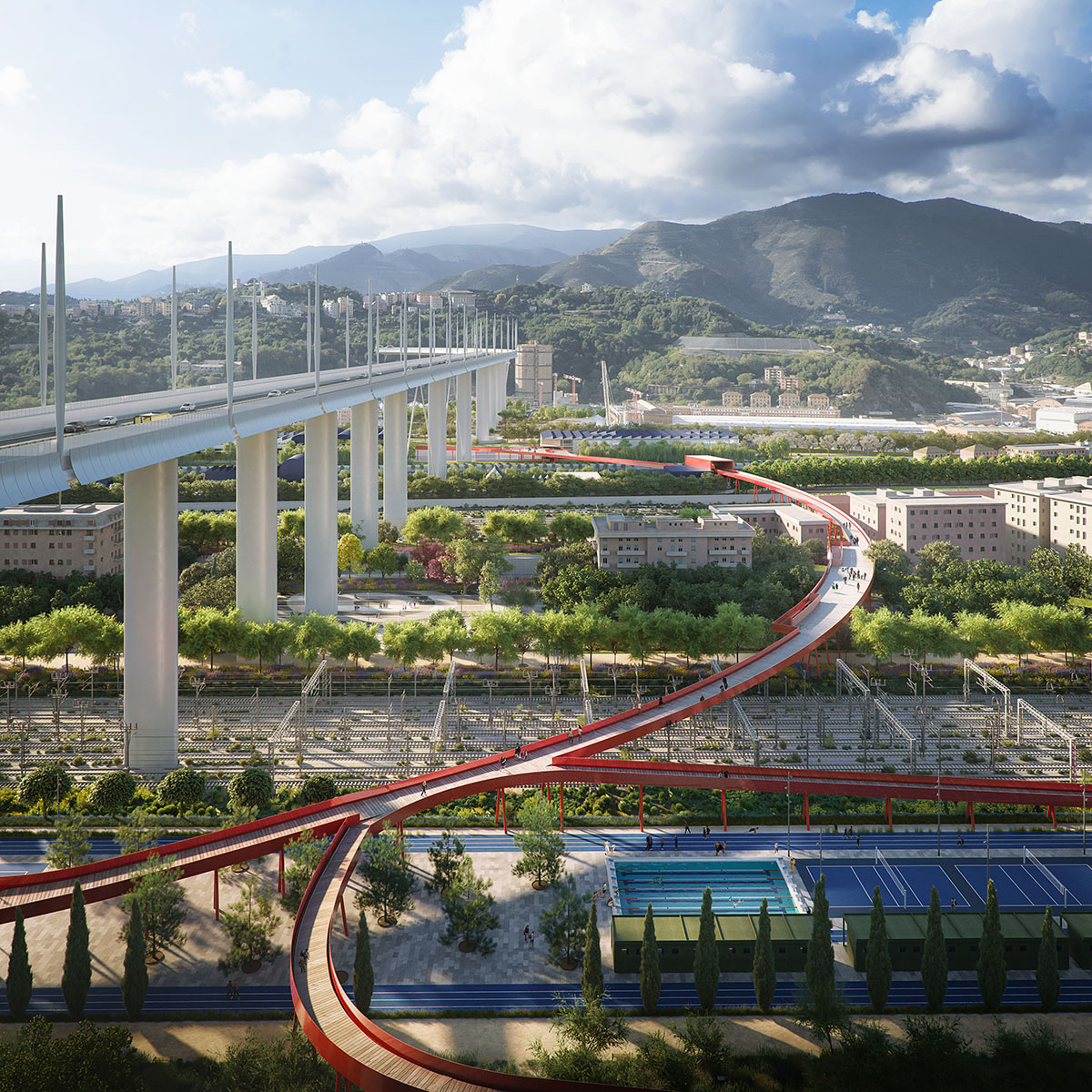 "A ring that embraces - passing under the new bridge - an area made of iron, water, cement and asphalt. The "Red Circle" symbolising the powerful local tradition of blast furnaces, cranes, and overhead cranes, runs along the locations where the tragedy of 14 August 2018 occurred", said Stefano Boeri, during his presentation. 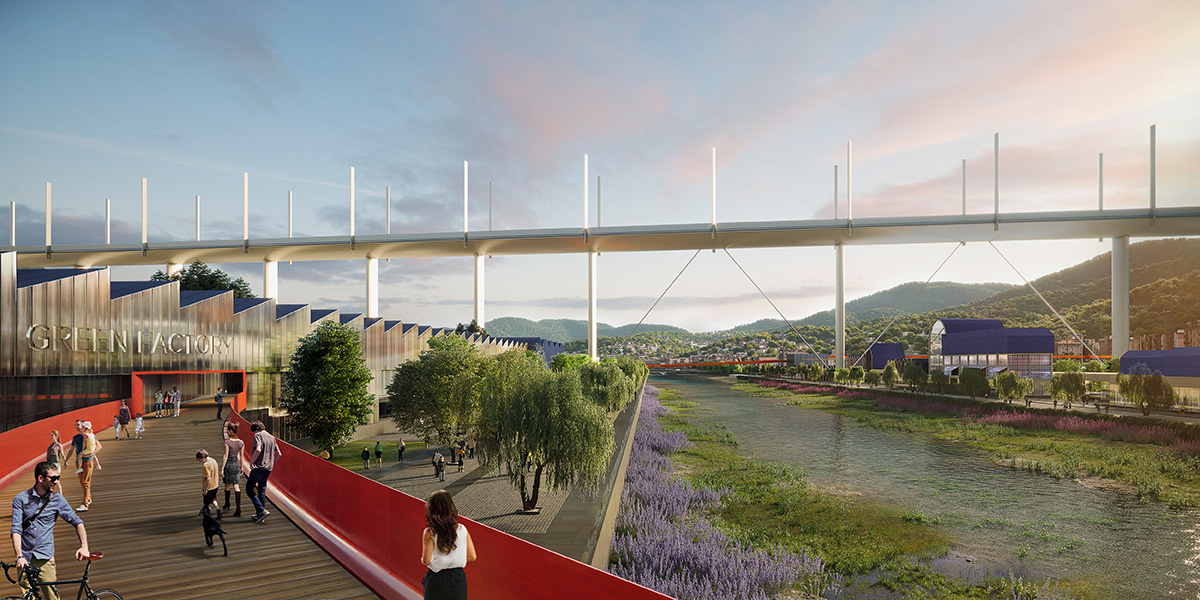 "It embraces them without separating them from their context, linking them together, joining the separate sections through bike/pedestrian path.The circle also distributes the renewable energy generated by the solar collectors - thermal and photovoltaic - located on the roofs of the buildings. The Wind Tower and the piezoelectric flooring (which symbolically contribute to the energy balance) convert into energy the traffic flows that run through the new Bridge and the Circle", said Stefano Boeri. 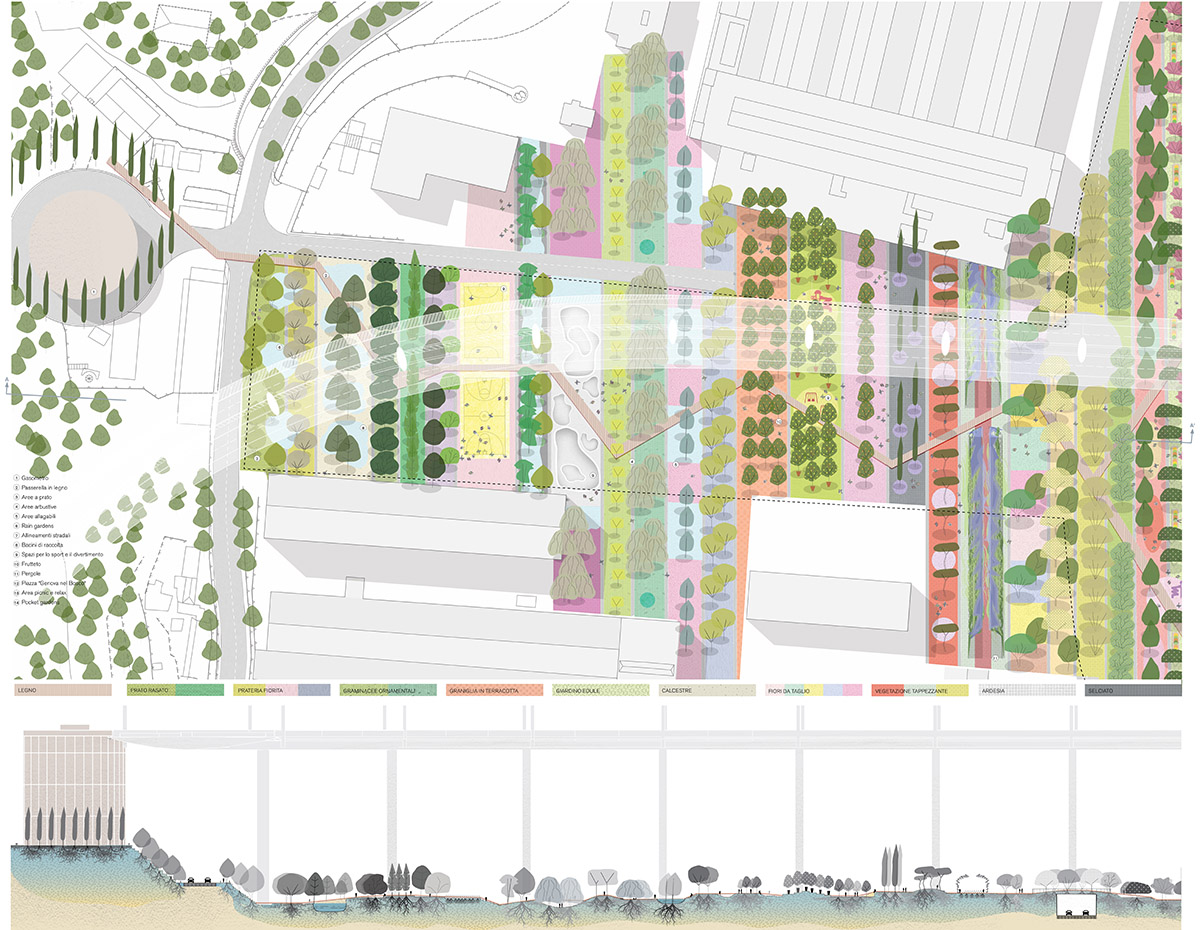 "The project rebuilds not just from an architectural and urban point of view, but above all from a social point of view. This rebirth called for a project that first and foremost would be a hymn to life. Joyful, with quality services, designed primarily for people, people who live and work there", said Andrea Boschetti. 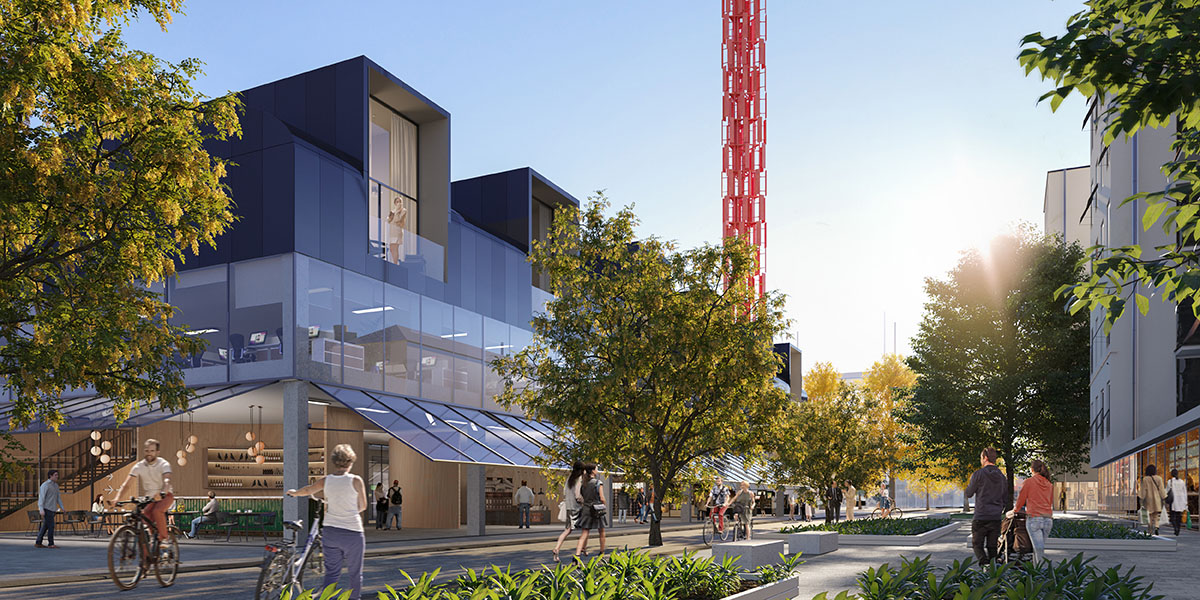 "We strongly wanted the vision to embody the colours and scents of the Mediterranean, of which Genoa is a symbol in the world. In fact, the goal is to rebuild a cohesive urban system, socially active, innovative so as to revitalize not just the area but also the neighbouring ones by turning it into an attraction. The architectural project proposed consists of the design of World Buildings that is large clusters of buildings with a multi-functional role and a streamlined yet recognisable architectural language", said Andrea Boschetti. 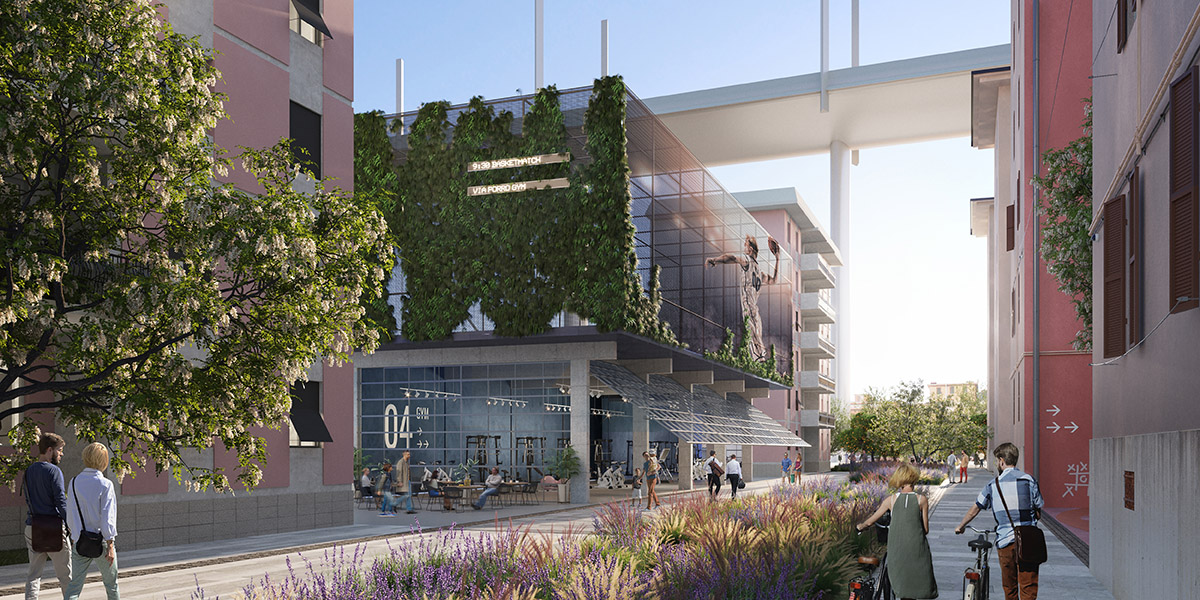 "Inspired by industrial architecture and the blue colour of the Mediterranean, the new buildings are built with sustainable materials and the large roofs offer surfaces for the production of renewable energy. The buildings open up to the park and are intersected and connected by the Red Circle," said Andrea Boschetti. 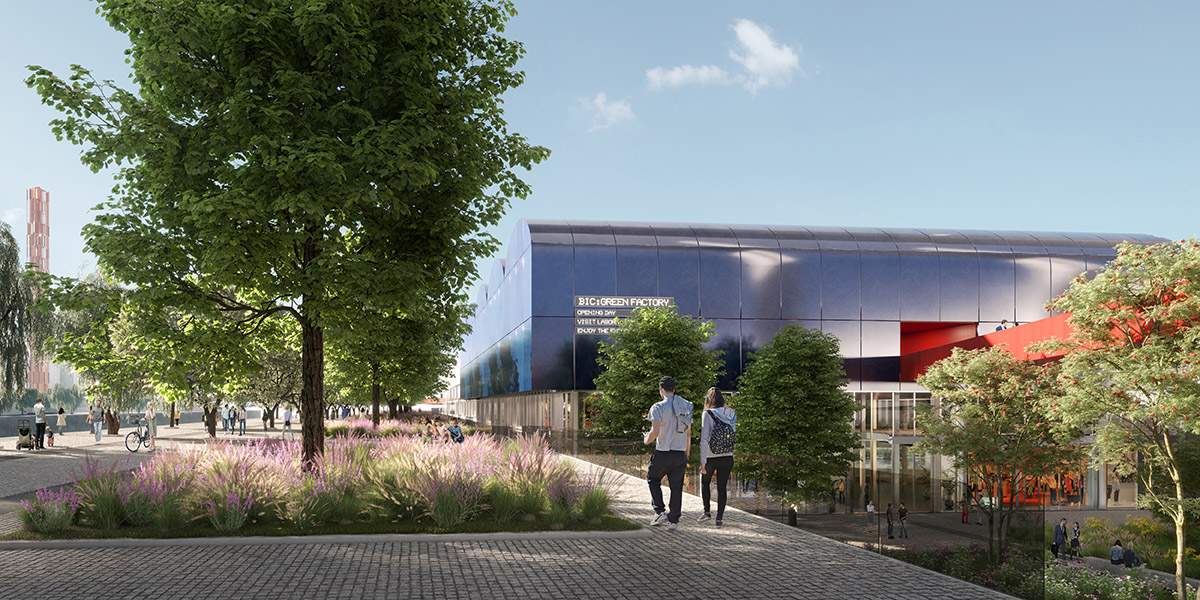 "The landscape project presents itself as a structure of parallel stripes that organises the entire site, giving rise to a botanical park where each strip, whose width varies from 7 to 20 meters and is marked by an aligned path, represents a different type of garden, thus increasing the degree of biodiversity of the entire area", said Petra Blaisse. 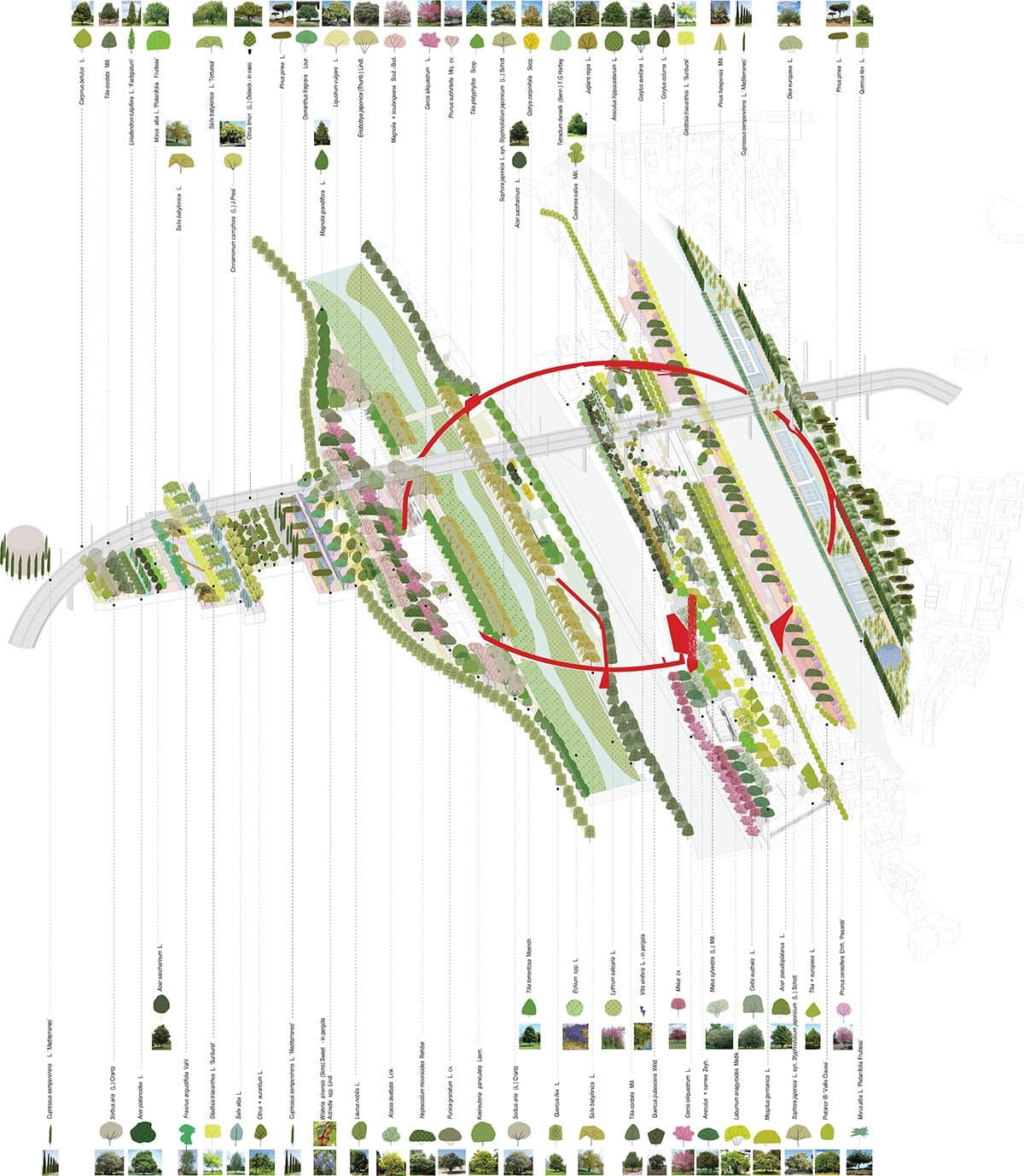 "And of the experiences for the citizens through the typologies themselves and the equipment (it will be possible to use recreational, educational and socialisation areas as for playing sports, collecting flowers and fruits, using animal dedicated areas). Running perpendicular to the linear gardens there is a further zigzag path that becomes the only connection between East and West until one reaches the Red Circle that intersects all the stripes and creates connections that were previously impossible, allowing cyclists and pedestrians to move everywhere with previously unimaginable ease", said Petra Blaisse. 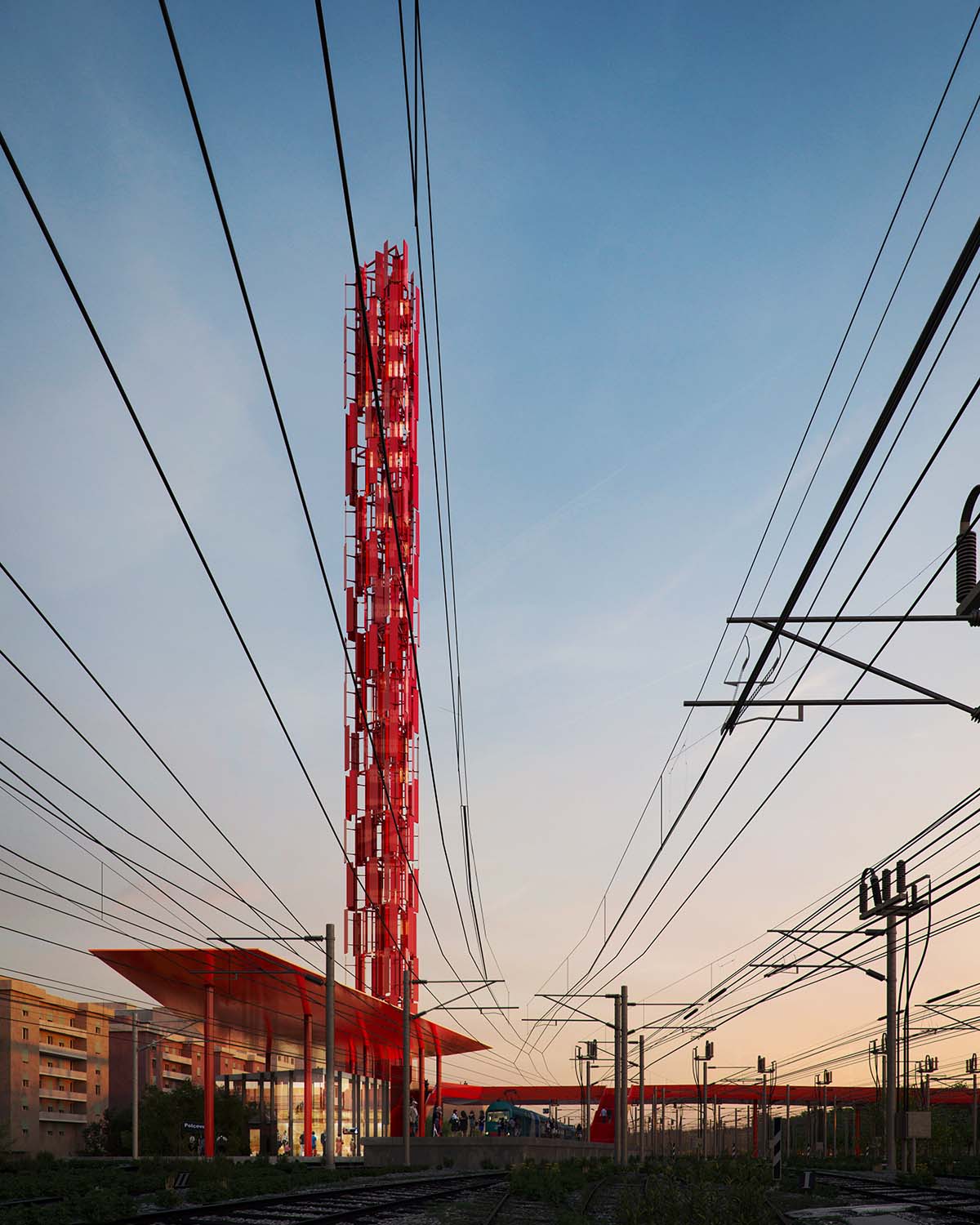 "The Red Circle, together with this system of paths puts available in a very efficient way all the green spaces and areas of the Park, giving to citizens and visitors an experience of the landscape that is both beautiful and intimate. All green areas and the squares will be created so as to absorb rainwater, extra water will be collected and used for irrigation and such. The efficiency of this new landscape does not only have a practical function such as the sustainability of the water management, but also embodies the symbolic value of Genoa's comeback after the Morandi Bridge tragedy", said Petra Blaisse.

All images © 54words unless mentioned otherwise.