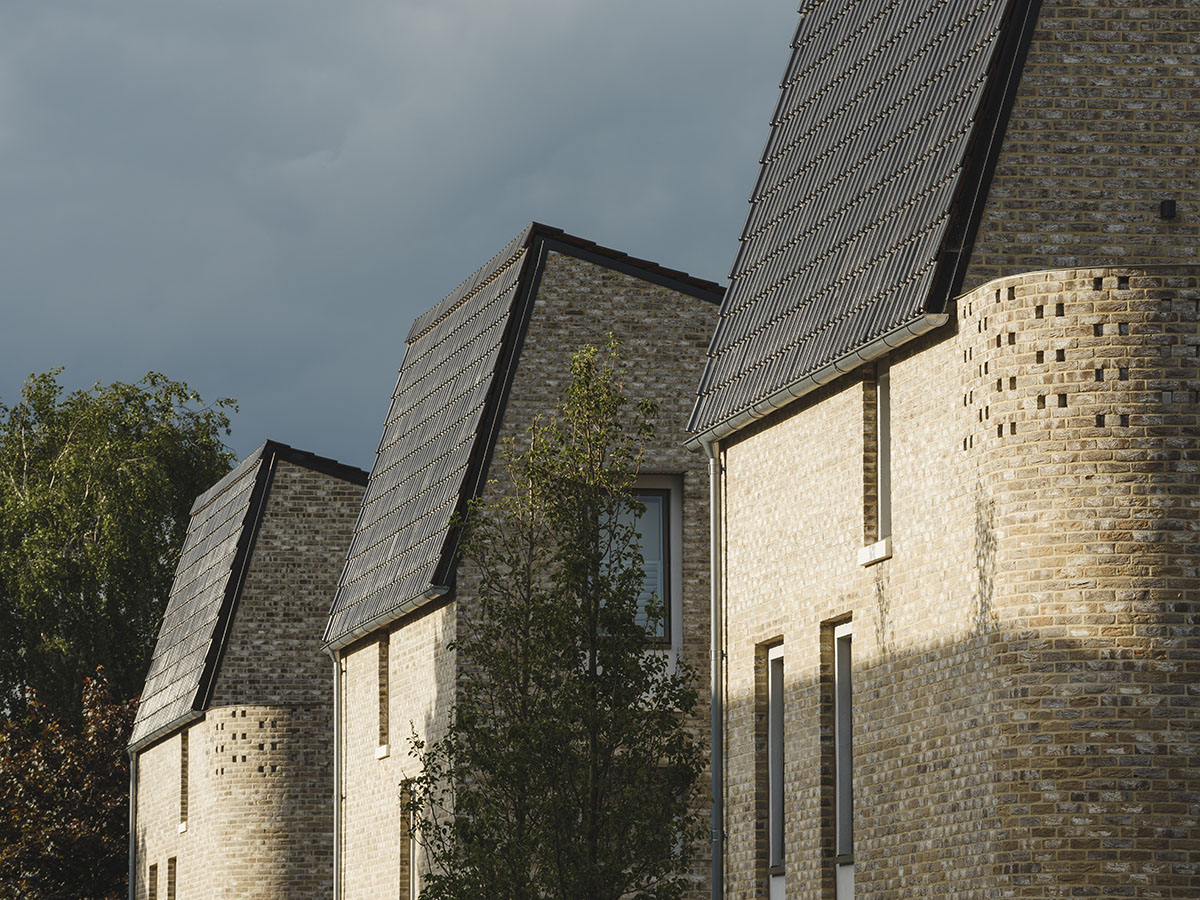 Goldsmith Street housing development for the Norwich City Council, is a high energy efficiency design by Mikhail Riches with Cathy Hawley. The project has also emerged as the recipient of the inaugural Royal Institute of British Architects (RIBA) Neave Brown Award for Housing this year. 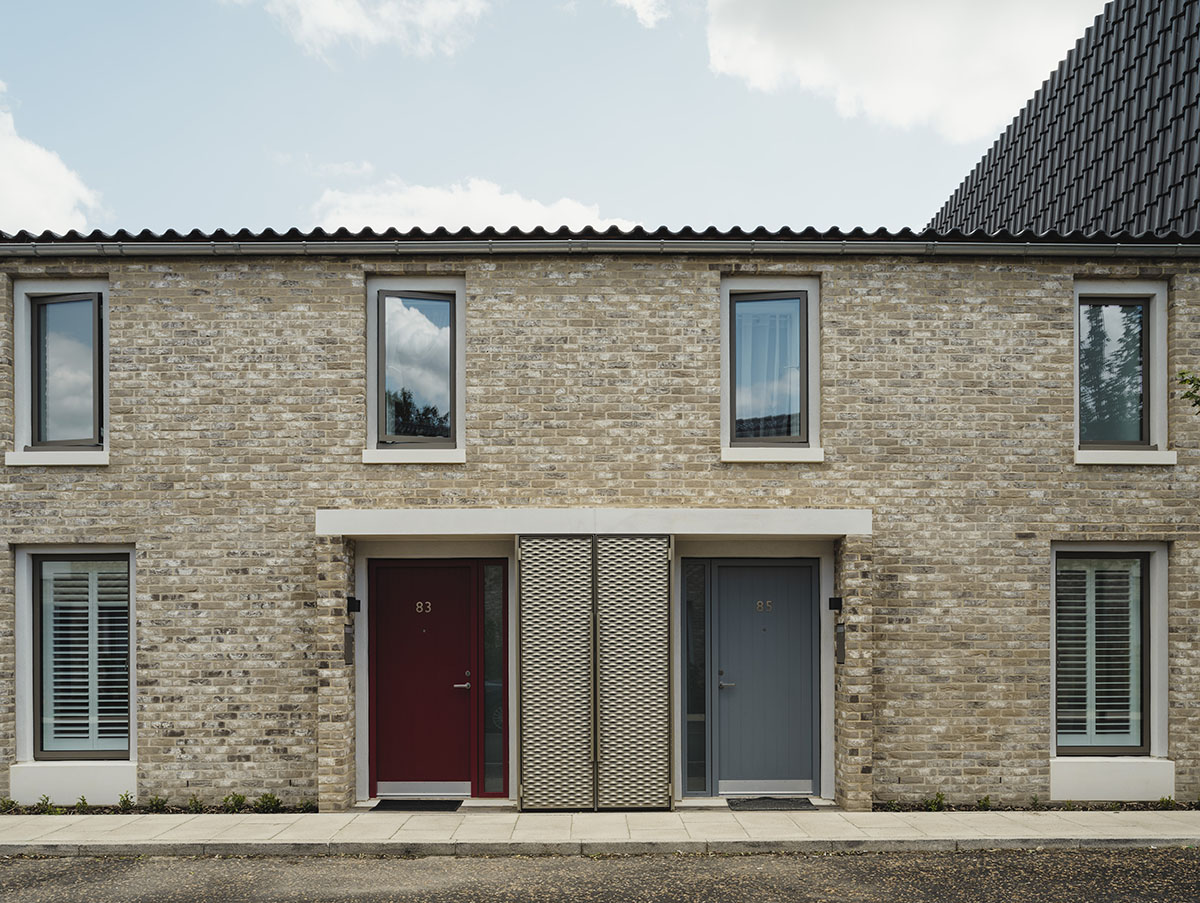 The Neave Brown Award for Housing was launched by RIBA in January this year. Named in honour of the late architect, Neave Brown (1929 – 2018), the Jury chooses the best new example of affordable housing in the UK. To qualify as eligible for the award, projects must have won a RIBA Regional Award. The Goldsmith Street project won the RIBA East Award.

The RIBA Stirling Prize is named after the late British architect Sir James Stirling, and has been active since 1996. The prize is RIBA's highest accolade and selects the best design in the UK. 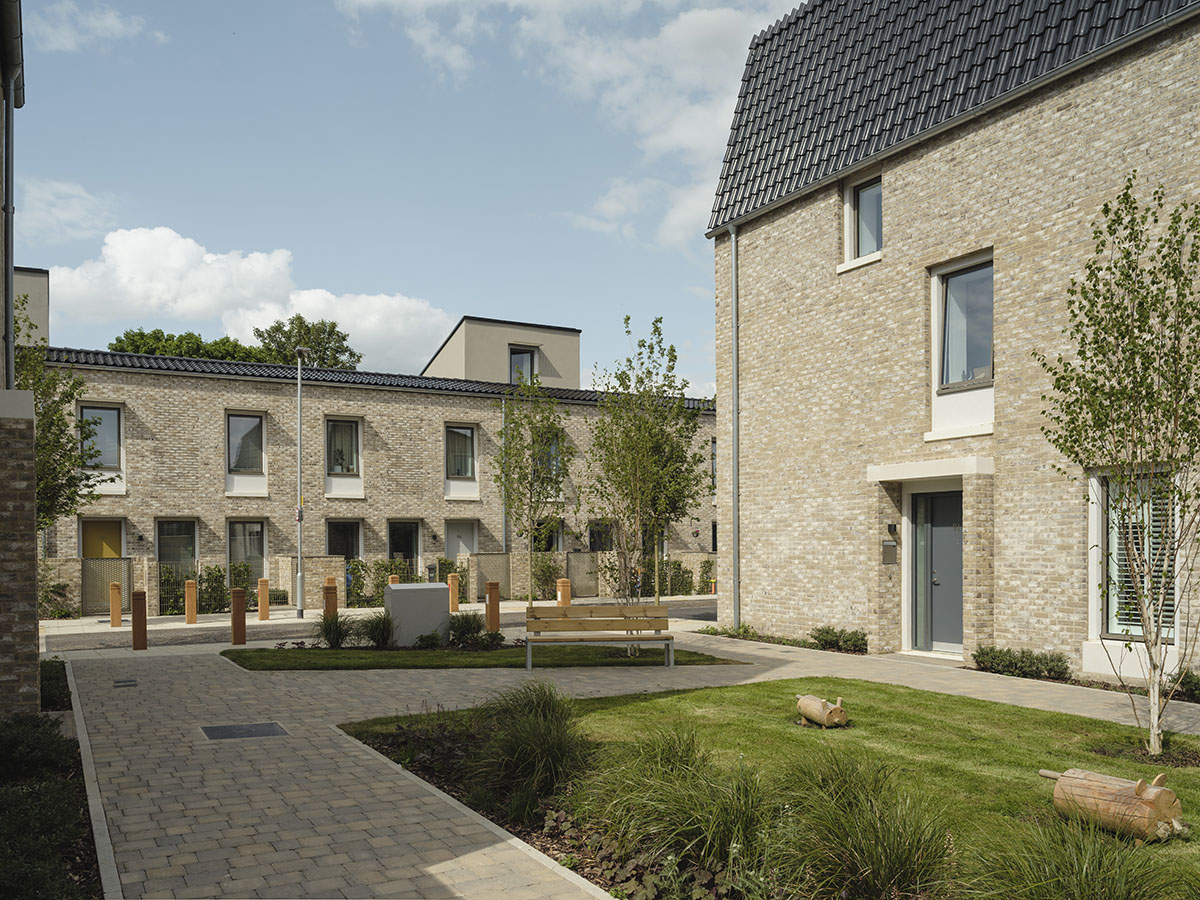 The Goldsmith Street comprises 100 homes with an English Cottage outlook, behind which finely detailed sustainability measures make an affordable and productive community living. The material choices such as the glossy black roof pan-tiles and the creamy clay bricks, evoke Norwich’s historical outlook, being similar to Victorian terraces nearby. The roof tiles recall the city's Dutch trading links. With neatly paved and lush open spaces, the community has taken over 10 years to complete construction. 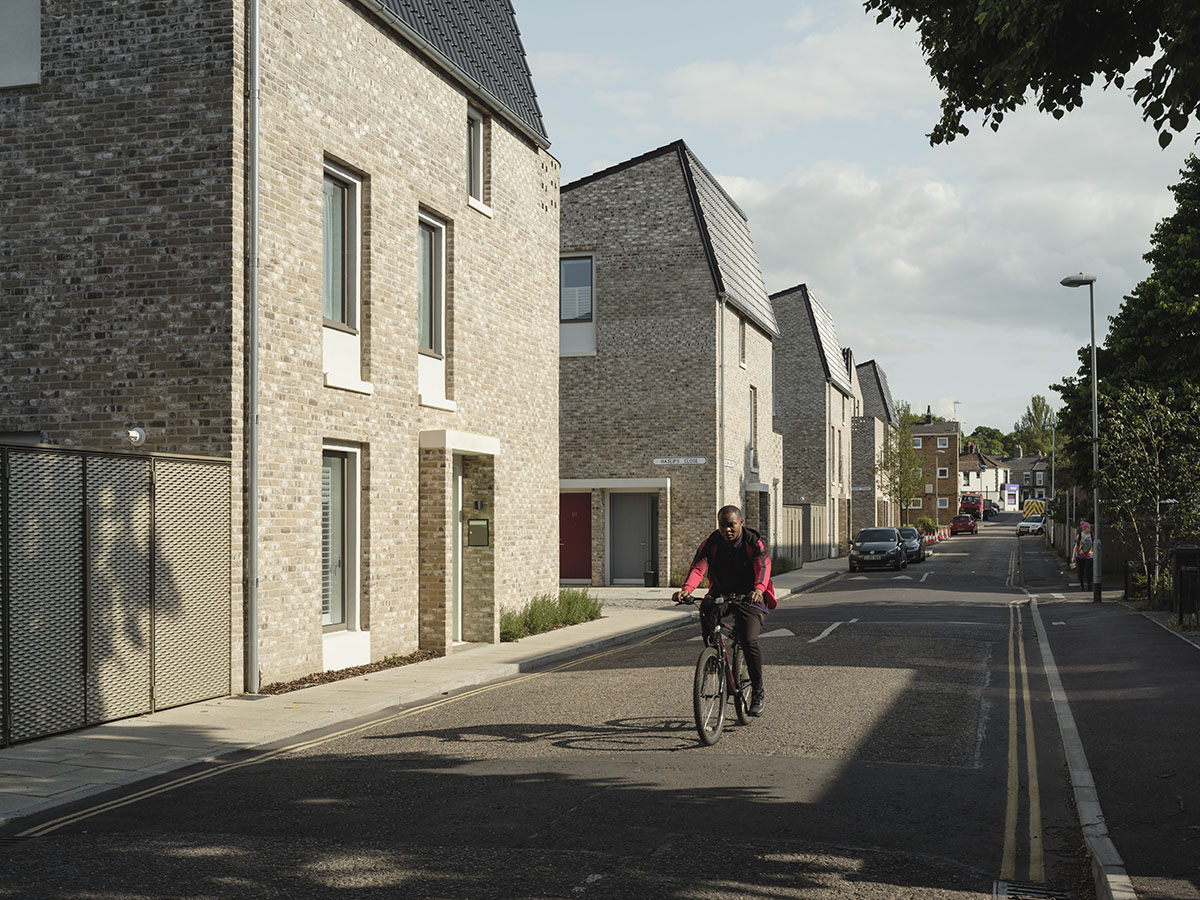 The design meets the  Passivhaus Standards. Some of the systems implemented are heat recovery mechanical ventilation, triple glazing and garden wall letterboxes, all reducing energy loss. 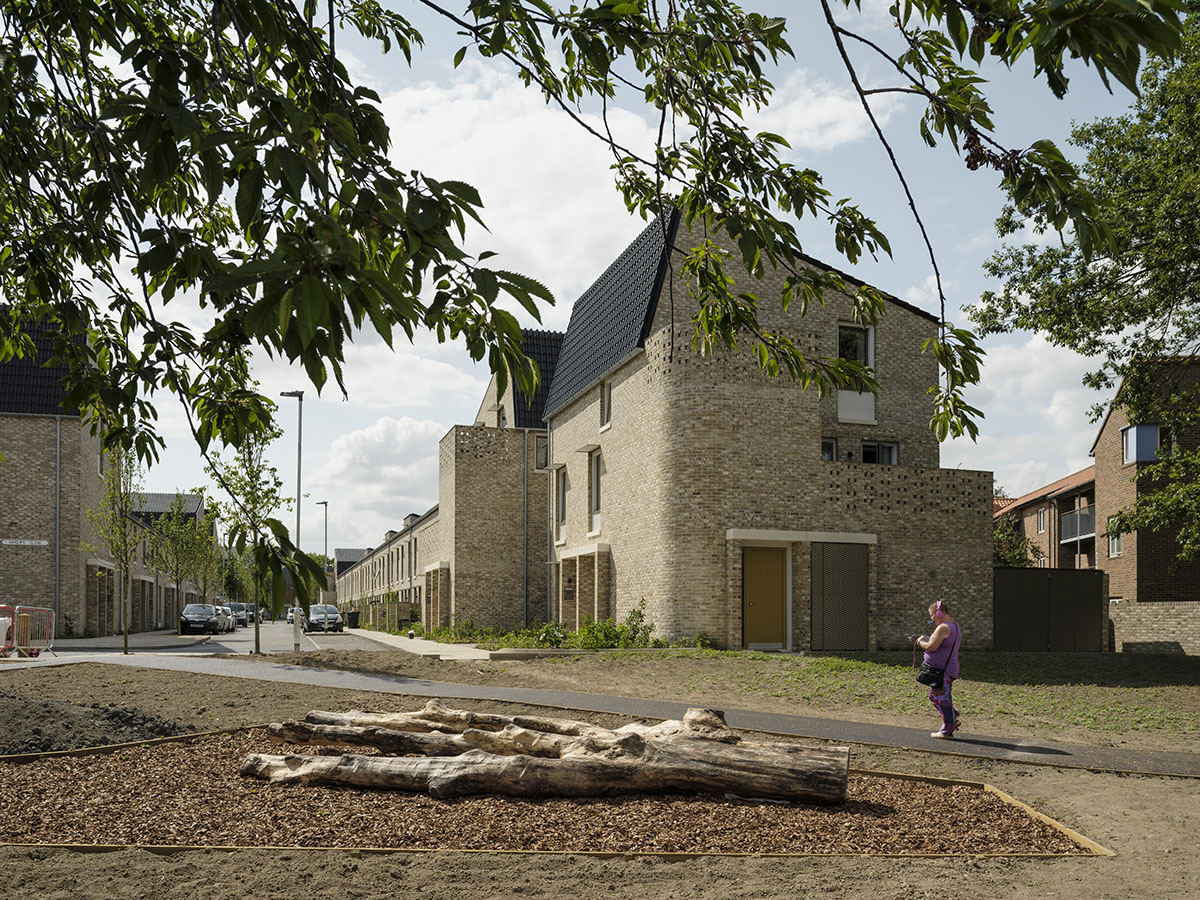 It is a passive solar scheme, designed to minimize fuel bills for residents. Annual energy costs therefore are estimated to be 70% cheaper than that incurred by the average household. Perforated aluminium ‘brise-soleils’ provide sun shades above windows and doors. 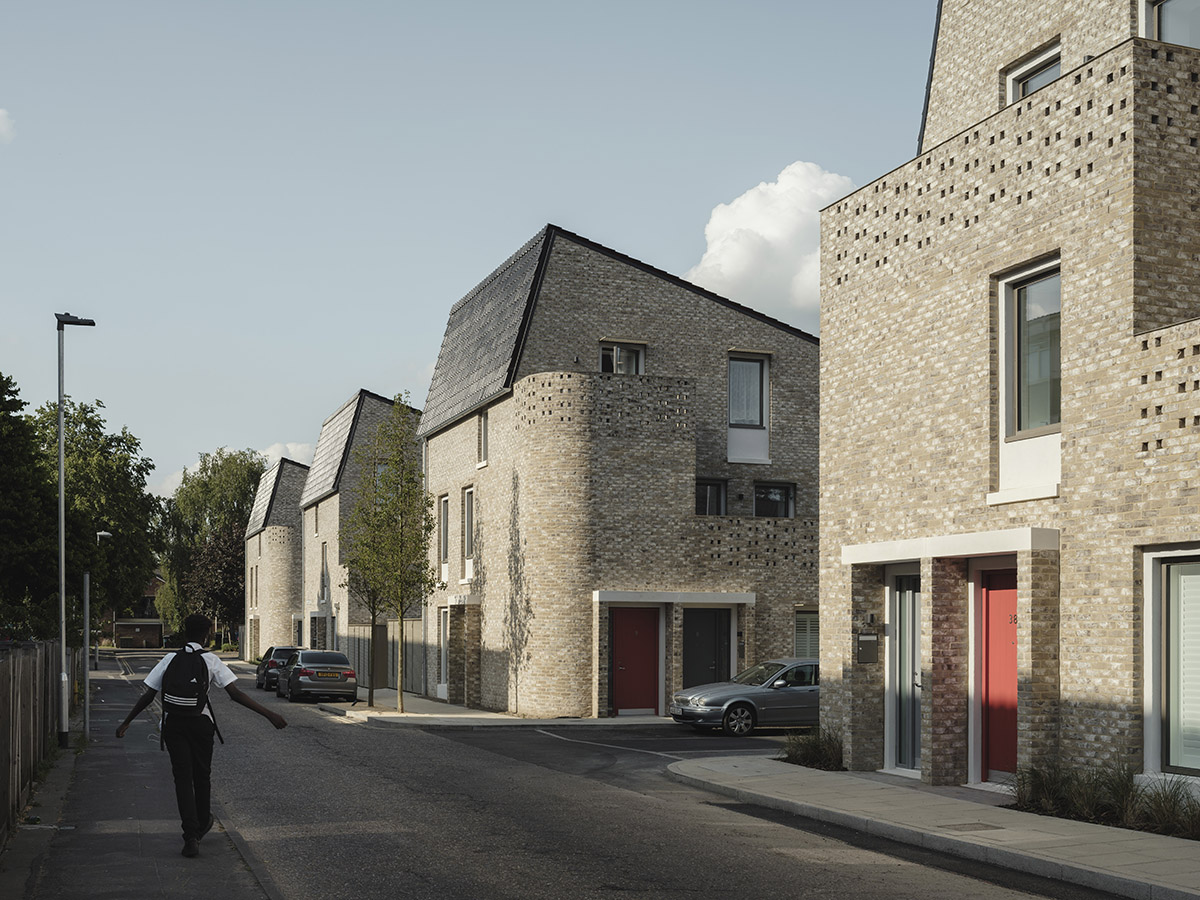 The Chair of the Stirling Prize Jury, Julia Barfield, described Goldsmith Street as a modest masterpiece. It is high-quality architecture in its purest, most environmentally and socially conscious form. Behind restrained creamy façades are impeccably-detailed, highly sustainable homes – an incredible achievement for a development of this scale. This is proper social housing, over ten years in the making, delivered by an ambitious and thoughtful council. These desirable, spacious, low-energy properties should be the norm for all council housing." 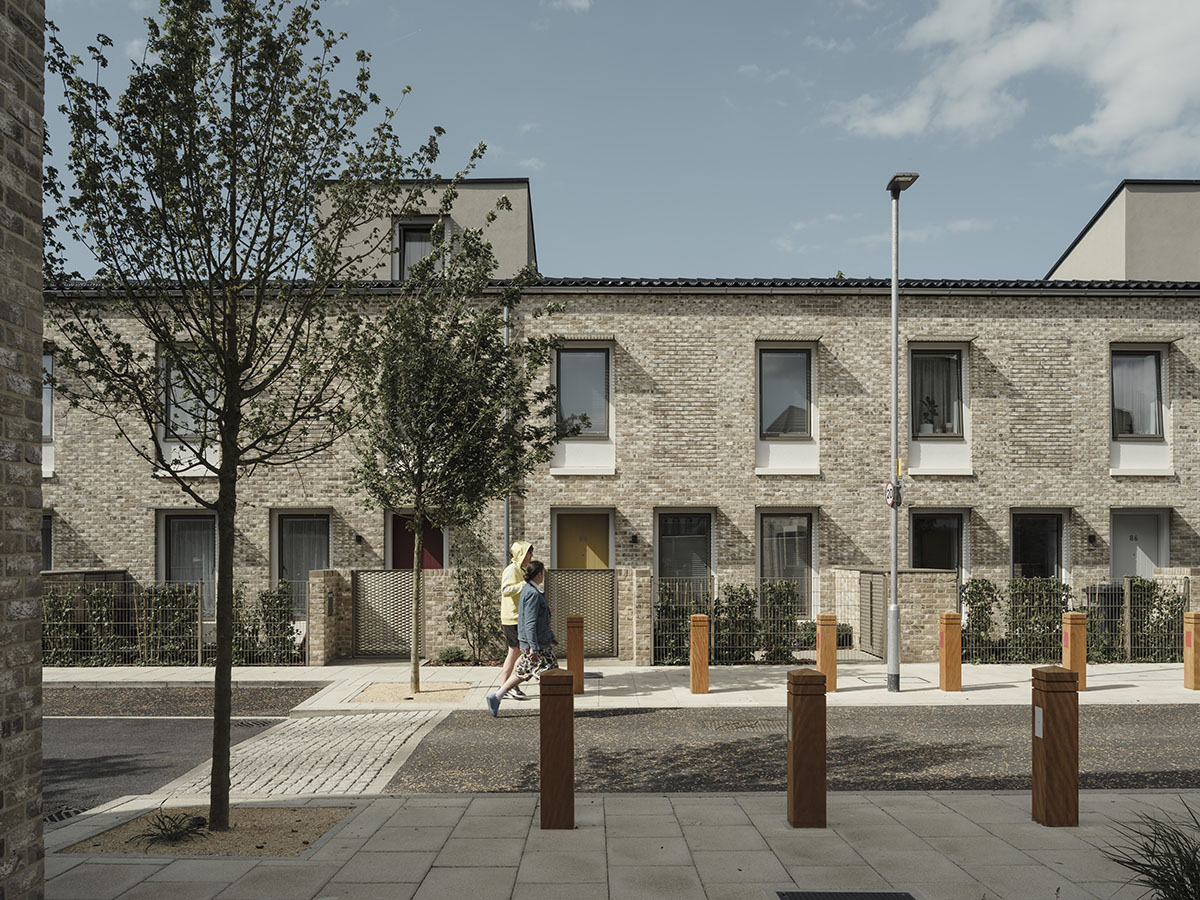 The Chair of the Jury for the Neave Brown award, Ben Derbyshire, describes Goldsmith Street as an exemplar for social housing. "Over ten years in the making, the architects, working with the City Council have shown impressive sensitivity and prowess at every stage of the process", says Ben Derbyshire. "The result is not just a highly-desirable new neighbourhood for Norwich, but homes of the highest-quality and most exacting environmental standards. That the outcome appears so naturally at ease in its context requires skill and determination belied by the scheme’s apparent simplicity. The UK urgently needs more ambition and creativity to drive the housing revolution that is needed, and Goldsmith Street shows us how it can be done", says Ben Derbyshire. 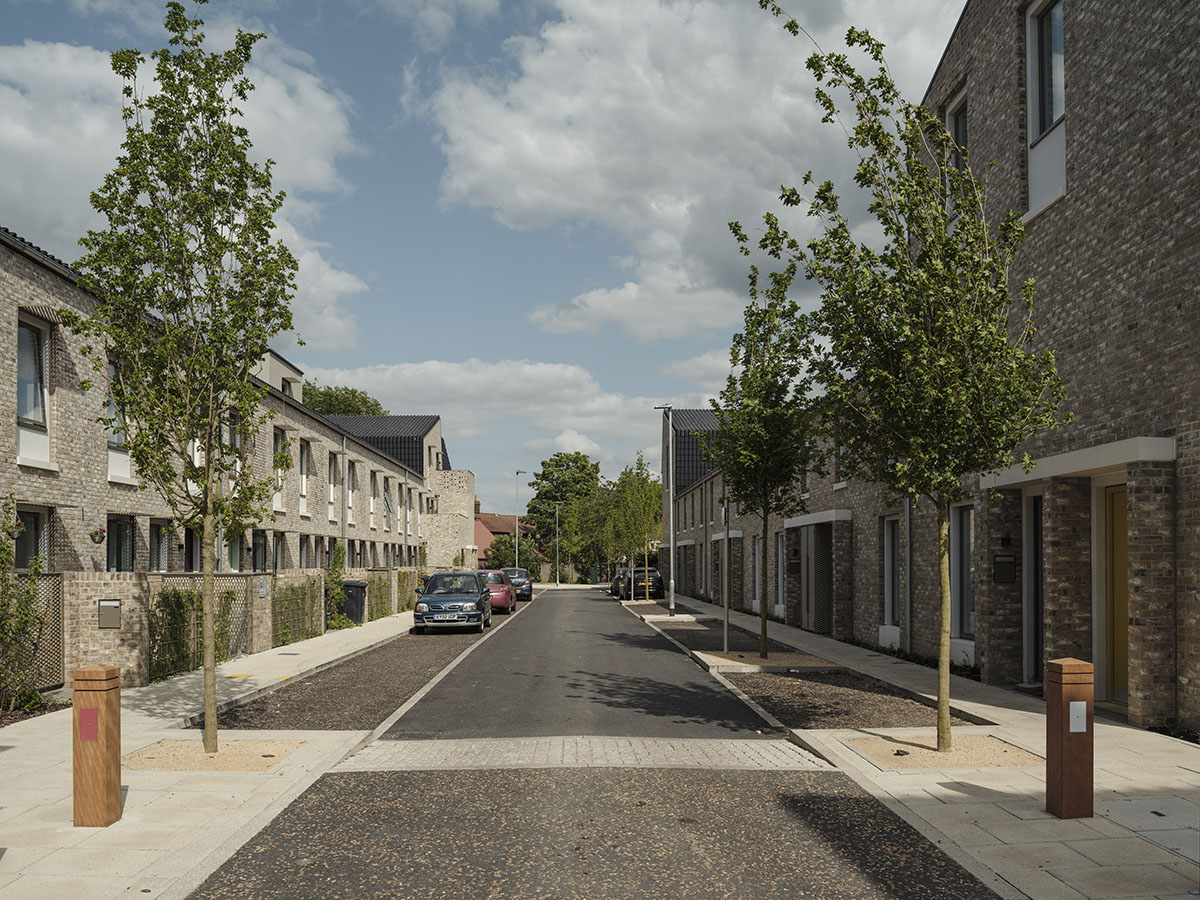 "Approximately 1.5 miles west of the city centre, Goldsmith Street is both familiar – four rows of traditional Victorian terraces set around ginnels – and, at the same time, has an air of the best of contemporary European domestic architecture", says the winner. 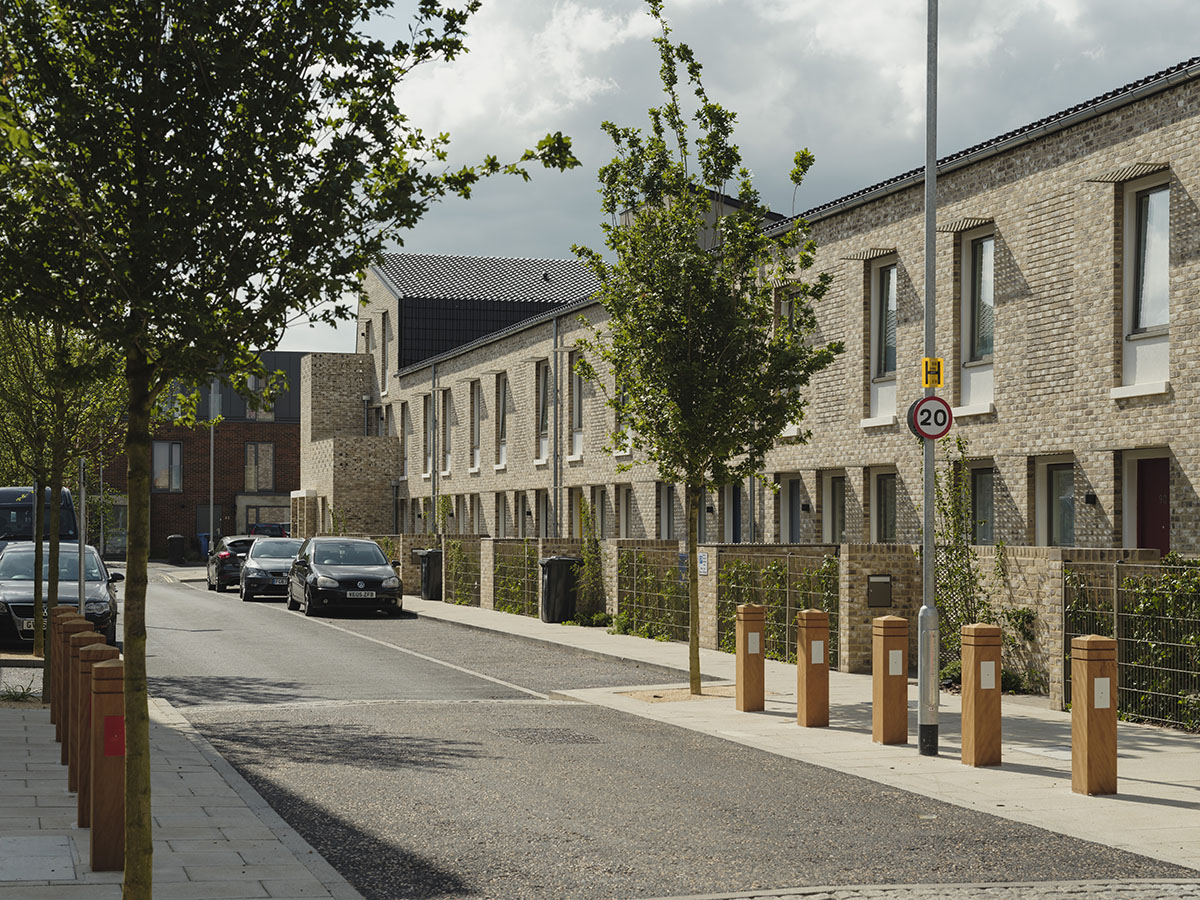 "The homes are designed to Passivhaus standard for Norwich City Council and the finely detailed and well specified houses and three storey apartment buildings create a consistency and wholeness that engenders a strong community feel. Individual front doors to every home at street level ensure routes are active and intimate, with daily opportunities for neighbours to meet", says the winner. 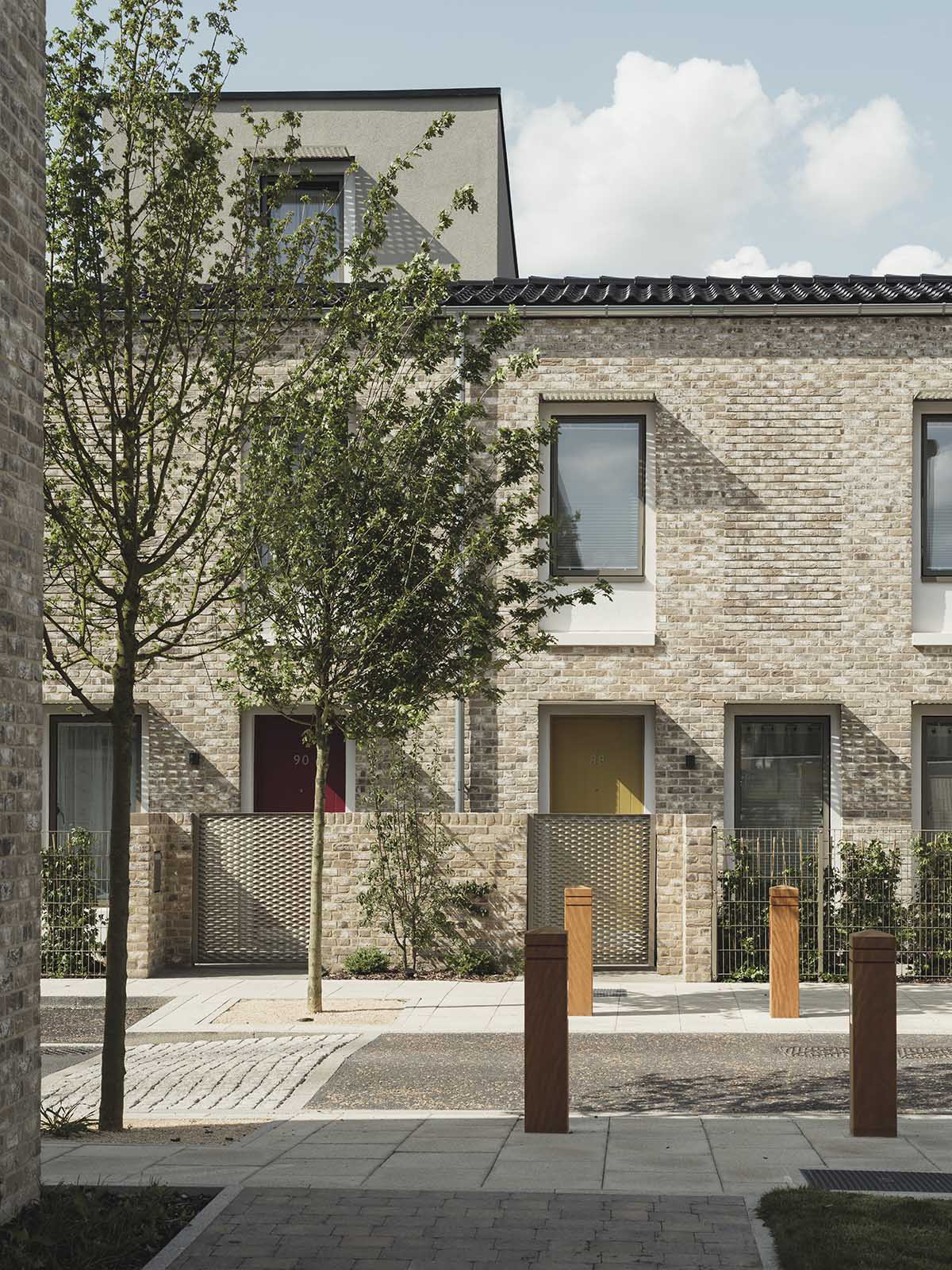 "Parking is carefully woven onto the streets but has been reduced to the minimum, to allow a feeling of pedestrian ownership and the enclosed ginnels, which can be secured or left open as needs dictate, themselves form vital and serene shared spaces", says the winner. 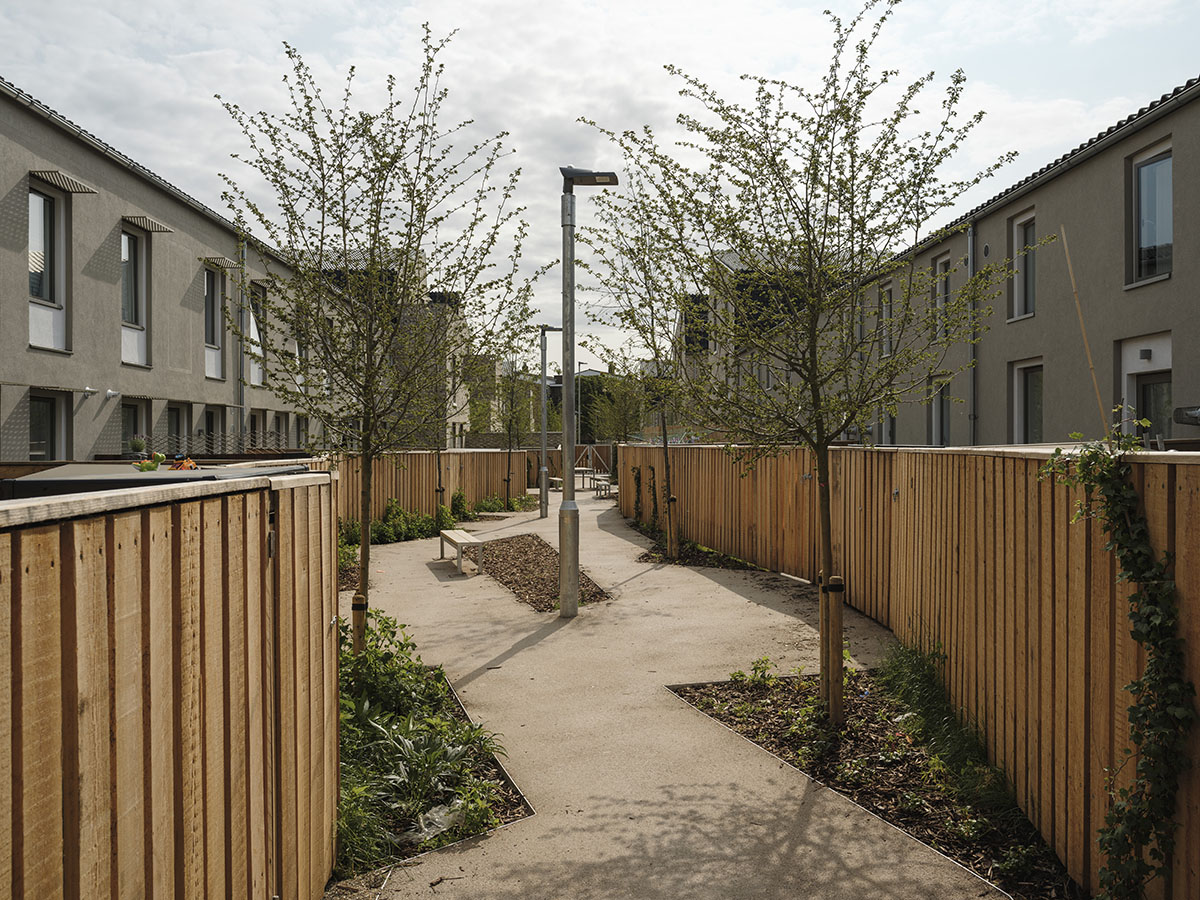 "Bin storage has become an art form in itself and is beautifully detailed, at times used as a device to form a buffer between the public and the private, whilst landscaped public spaces break up the rectilinear form nicely. Championed and supported by a brave and tenacious Local Authority, Goldsmith Street is a project of admirable depth, intelligence and skill", says the winner. 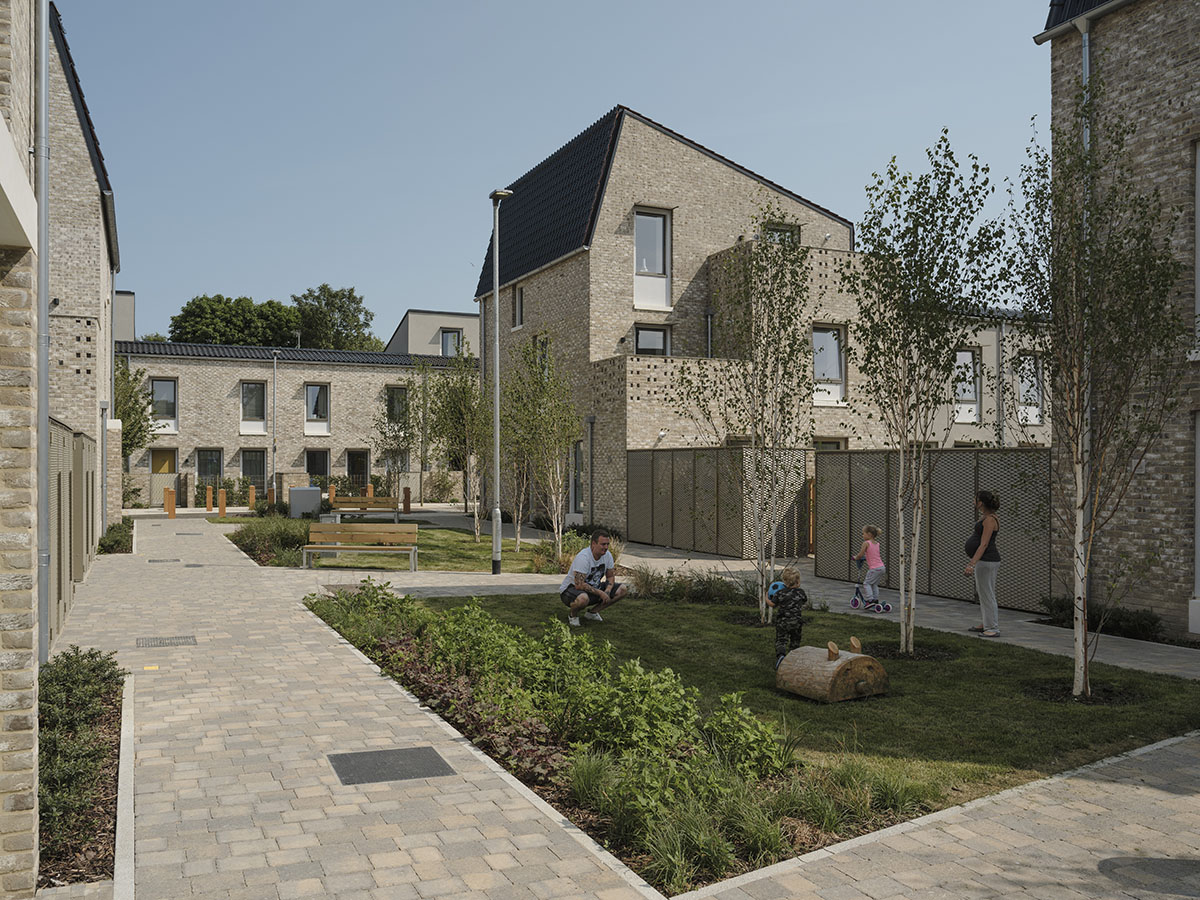 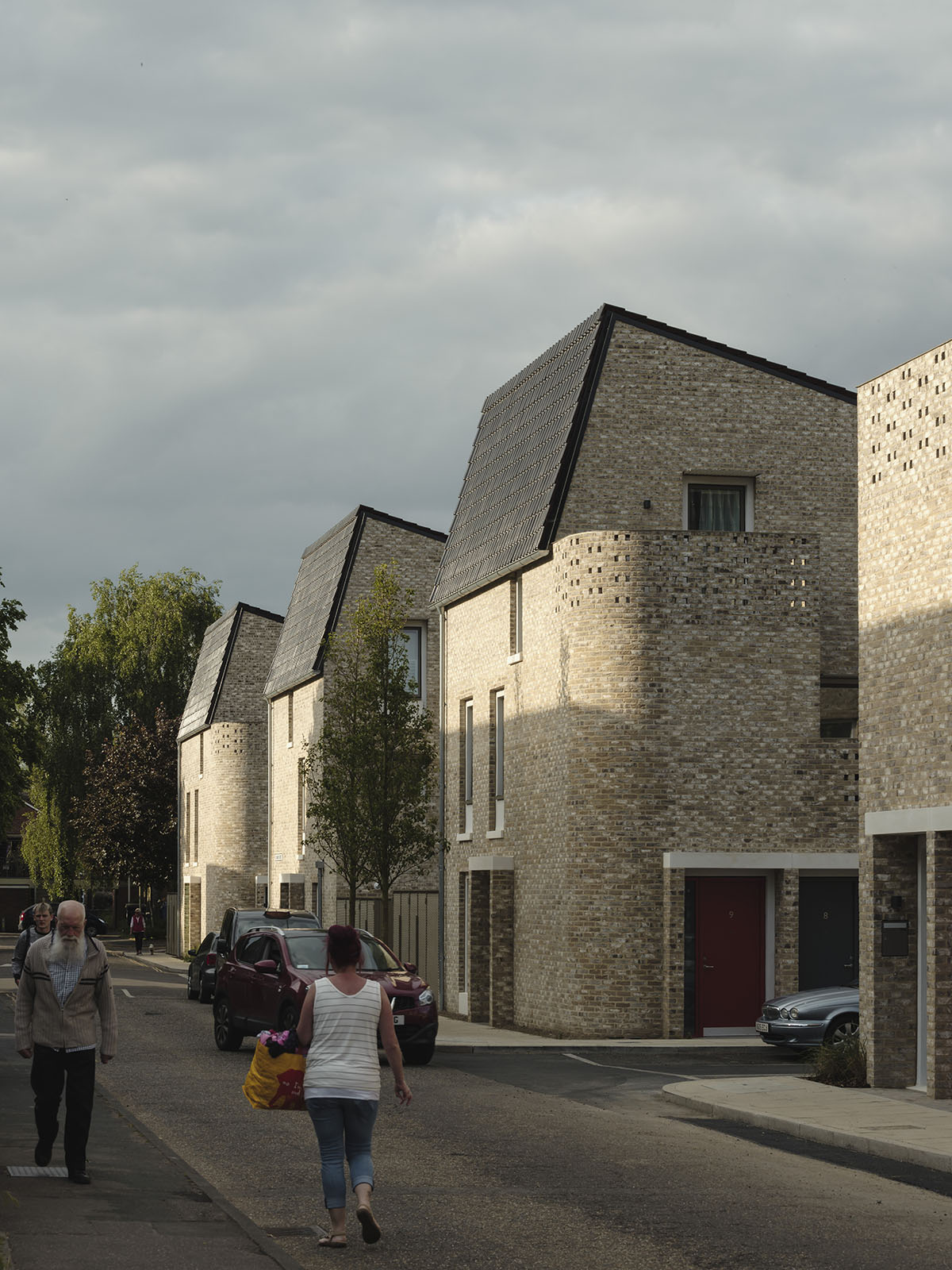