Named Tripolis Park, MVRDV's project comprises the renovation of the old buildings, a new park, and a new office block that will create a sheltering screen to protect the complex from noise created by the adjacent highway while embracing the Van Eyck-designed buildings behind.

Uber, an American multinational ride-hailing company, was announced as the building’s main tenant. The company will occupy the lower floors of the new building and the largest building of the original Tripolis complex. 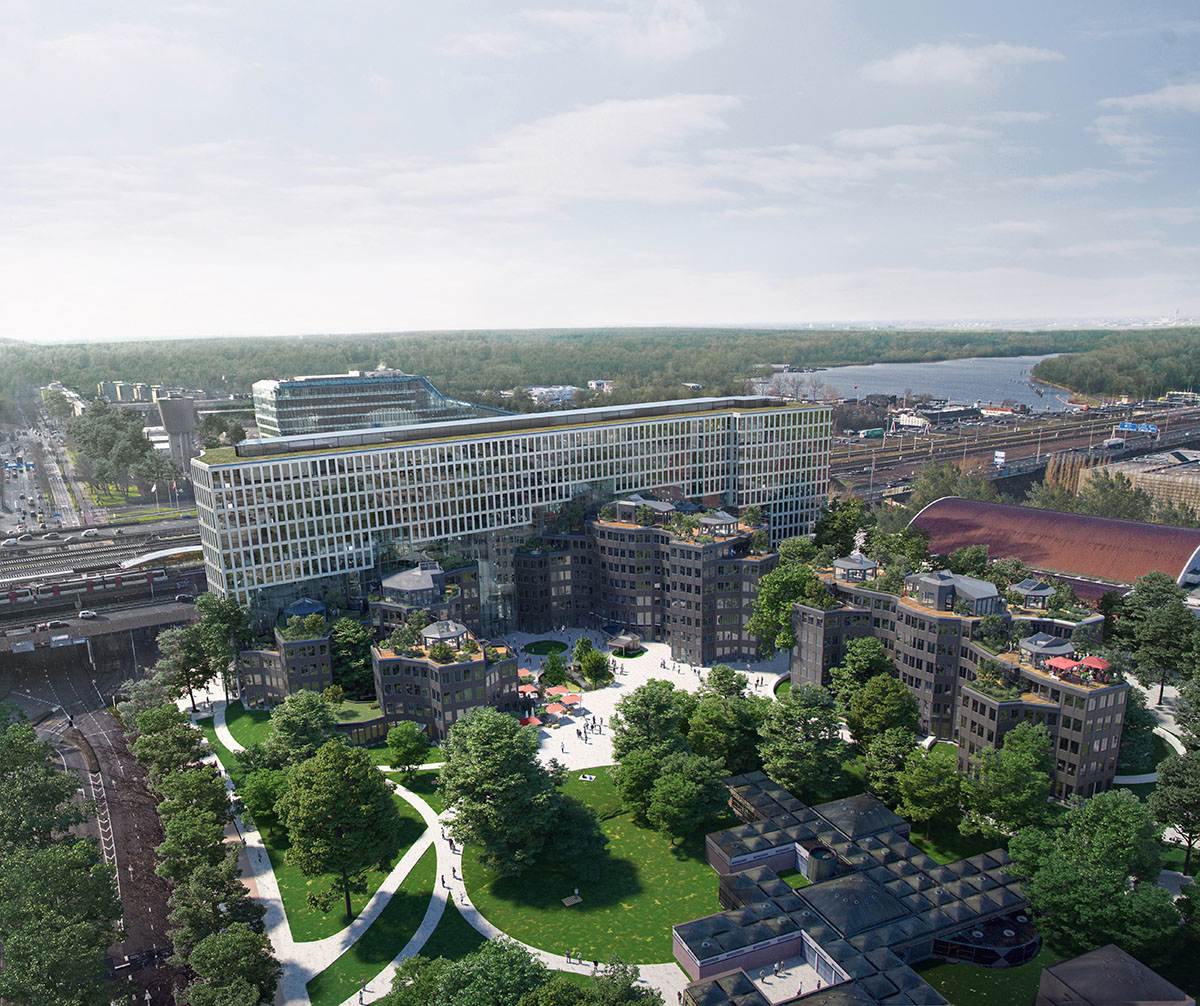 As the design is elaborated and finalised, renovation work on the existing buildings will begin next week, with the project scheduled for completion in 2022.

Commissioned by Dutch real estate developer Flow, MVRDV aims to bring a viable commercial activity to the complex, which has been neglected and struggled with low occupancy for years, and protect the main characteristic of the complex, including wood-and-granite façades with colourful window frames.

The complex was completed in 1994, it sits directly to the south of Van Eyck’s 1960 masterwork, the Amsterdam Orphanage. The three buildings each have clusters of offices radiating from central stair towers and wood-and-granite façades with colourful window frames.

"The project was granted Municipal Monument status in 2019, enshrining its status as part of a larger ensemble including the orphanage," added MVRDV. 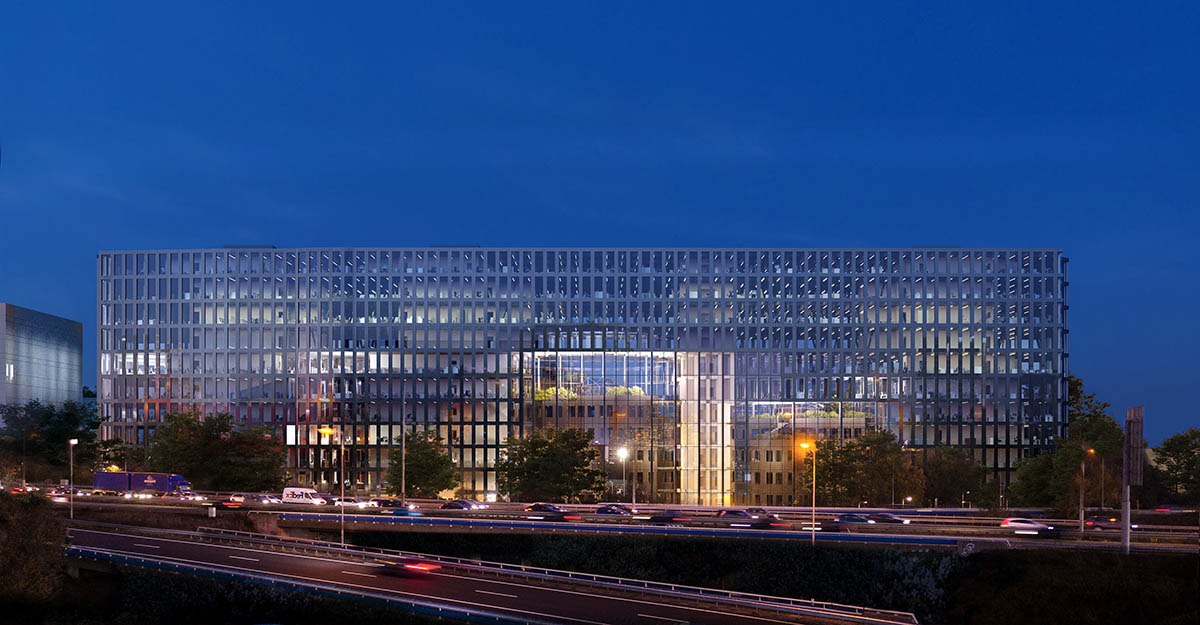 MVRDV’s design will bring much-needed commercial viability to the Tripolis offices while respecting and celebrating the unique qualities of Van Eyck’s design. The key addition is a new 11-storey, 31,500-square-metre “groundscraper” office block.

This new block follows the shape of the site’s southern boundary, acting as a sound screen to protect the complex and future housing developments from the noise of the adjacent A10 highway. This block is indented where it meets the existing buildings, adapting its grid structure to the complex geometry of Van Eyck’s offices.

In the offset between the new and old structures an interior public route is formed. The gaps between the structures are closed by delicate glass walls and slender bridges and stairs to join the complex into a unified whole while ensuring a certain politeness to the existing buildings. 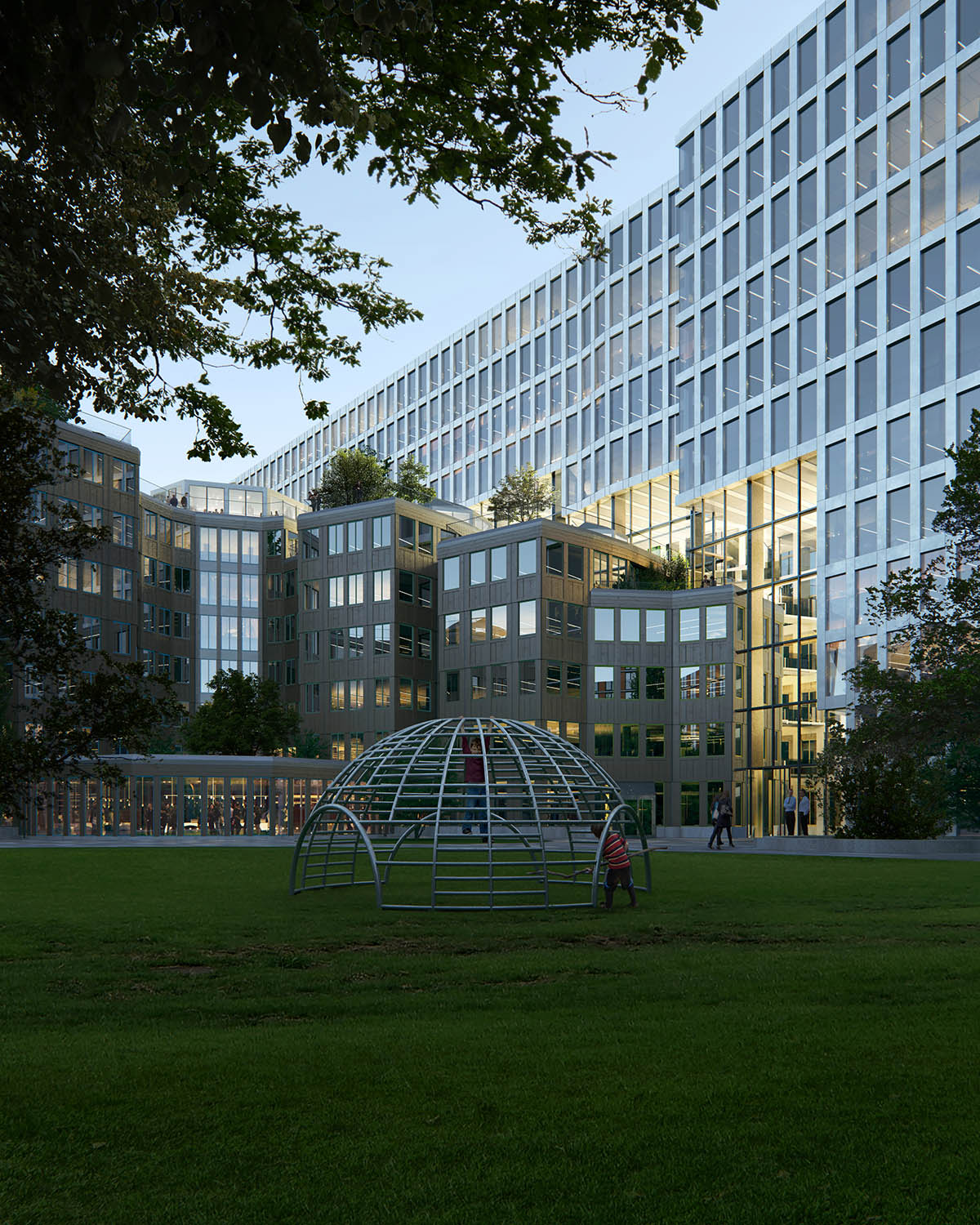 The relation between the austere, regimented south façade and the playfully indented north façade is revealed by a high-transparency eight-storey window that provides a glimpse of the existing Tripolis buildings where the indentation punches almost all the way through the new structure.

Led by Winy Maas, co-founder of MVRDV, Maas said: "The first day I entered Bouwkunde at TU Delft, I saw a packed lecture given by an old man, yelling with a plastic bag over his head, protesting against Carel Weeber and the other Rationalists in architecture those days. I thought, ‘Ah! This is the place to be’ and copied all his books the following day. So I am a fan of Aldo van Eyck's oeuvre and I think we should treat his design as respectfully as possible."

"The new building guards and shelters the existing Tripolis complex as it were, thanks to the protective layer we create. We literally echo Tripolis, as if it was imprinting its neighbour."

"The space between will be given a public dimension and will be accessible to passers-by. As a visionary in his time, Aldo already saw office spaces as meeting places. I want to continue that idea by promoting interaction between the two buildings in various ways," added Maas. 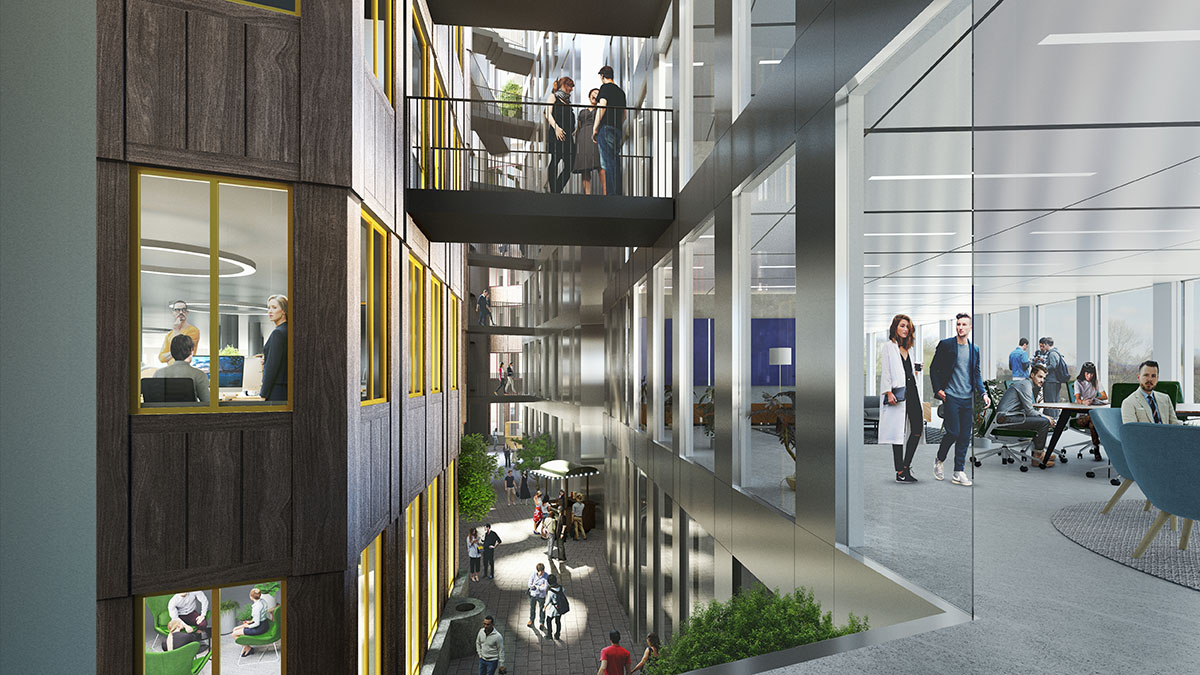 Essential renovation will be applied to the old buildings, retaining each block’s central staircase, the natural stone floors and other characteristic elements. Office spaces will be given a high-quality, industrial feel, while the roofs will be greened and activated with roof gardens and spaces for catering.

"A key goal of the transformation project was to ensure that Van Eyck’s buildings would become commercially viable," added MVRDV.

The largest building of the original Tripolis complex will be occupied by Uber, while the second-tallest building of the complex, to the north of the site, will remain physically separated from the addition, and will be transformed into affordable rental apartments in a later phase of development. 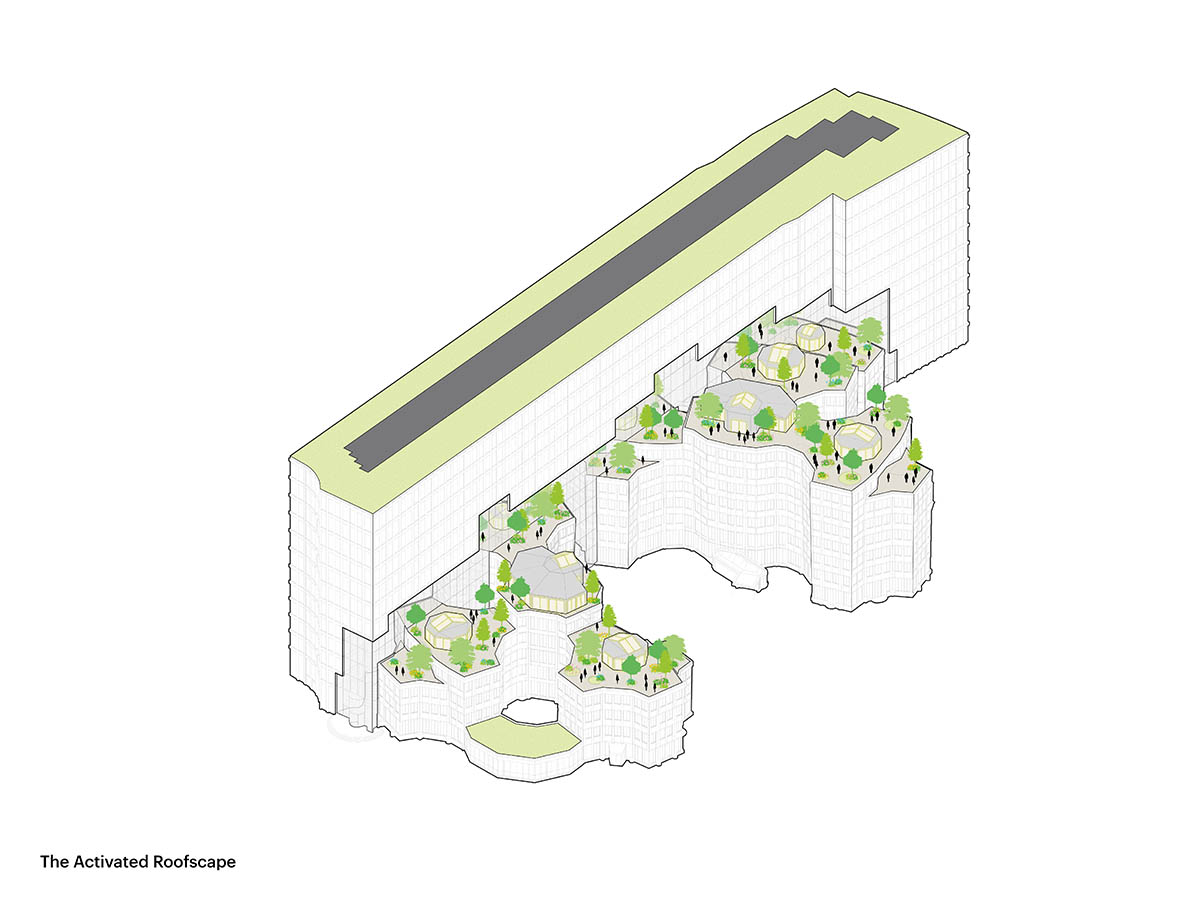 Together, the office addition, the renovation of two of the existing Tripolis buildings as offices and residential transformation of the third, and renovations and alterations to the landscape form a new complex named Tripolis Park that maintains the relationship between the Tripolis complex and the Orphanage.

The new office building will include a green roof with photovoltaic panels, and targets BREEAM Excellent certification. 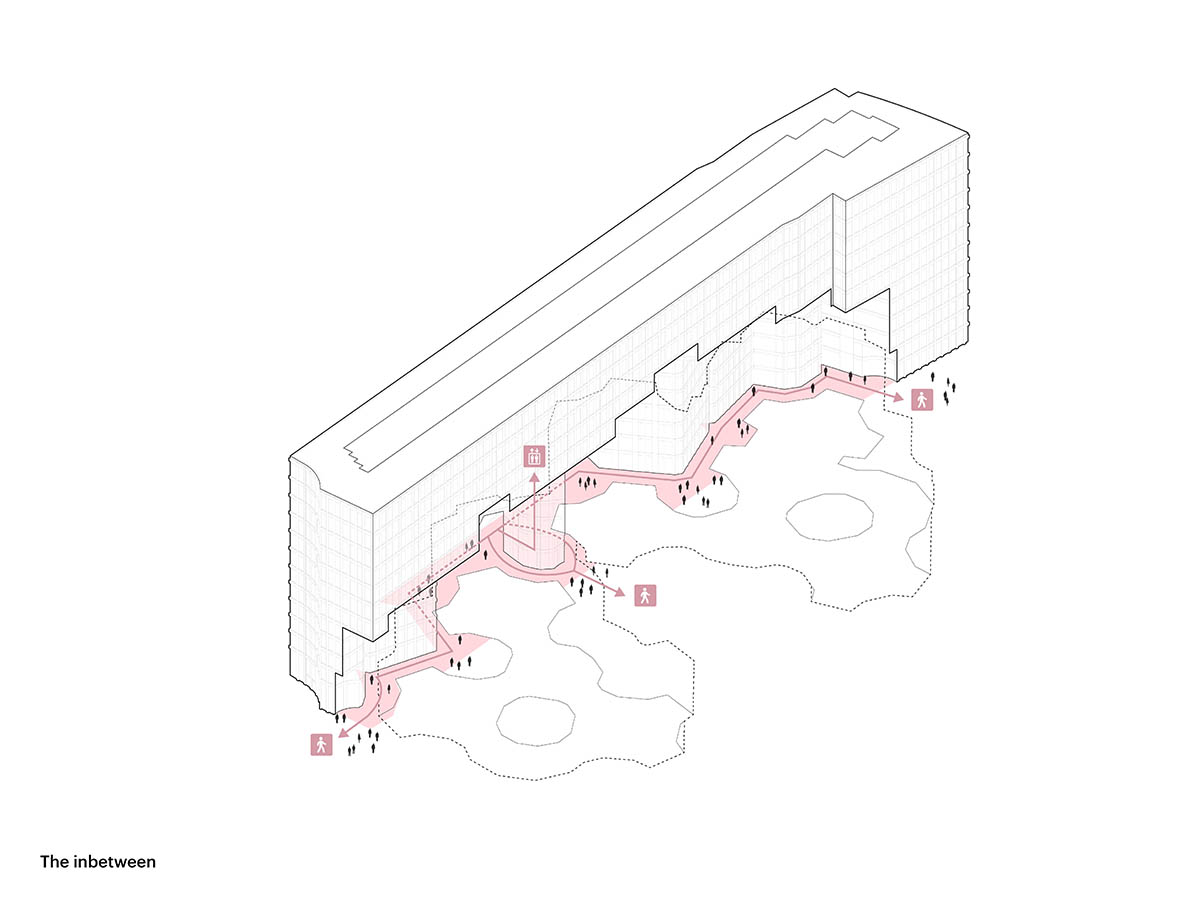 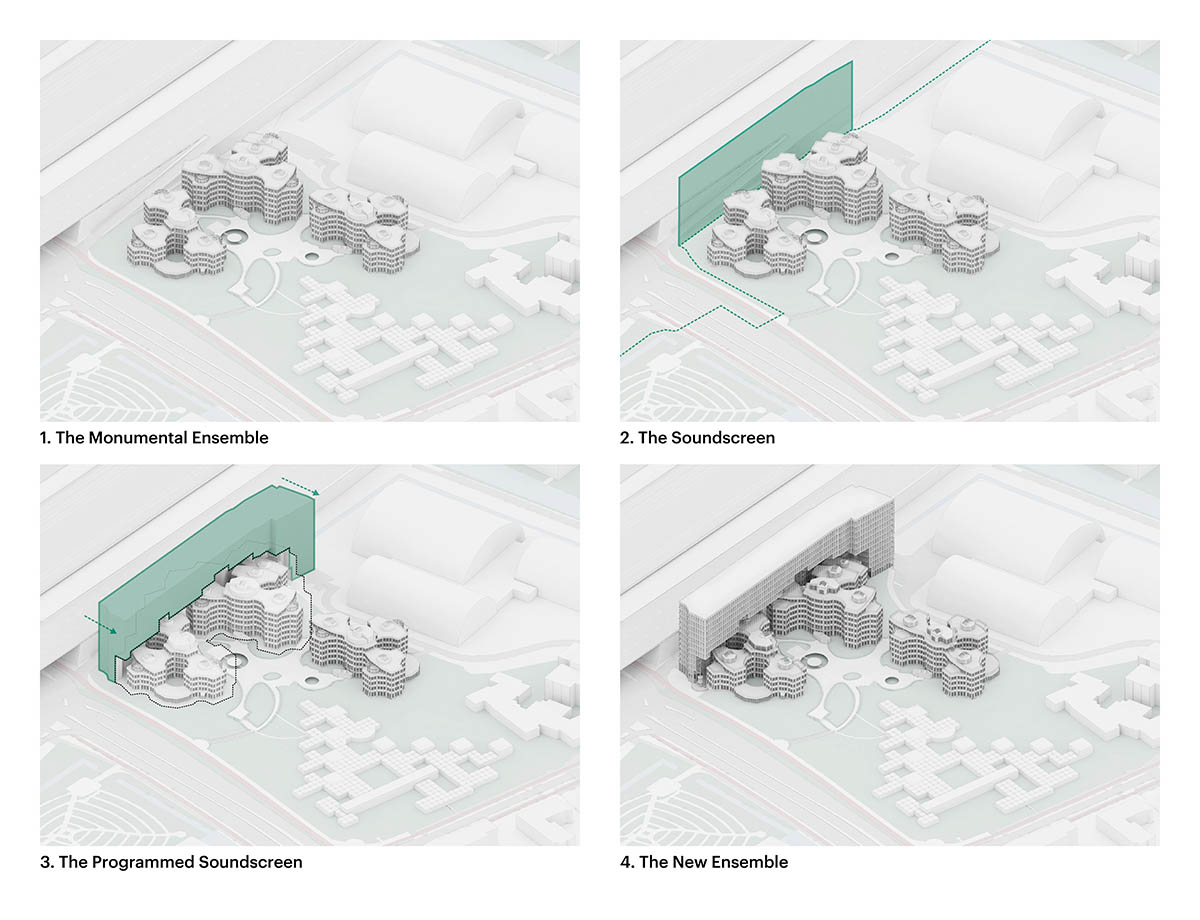 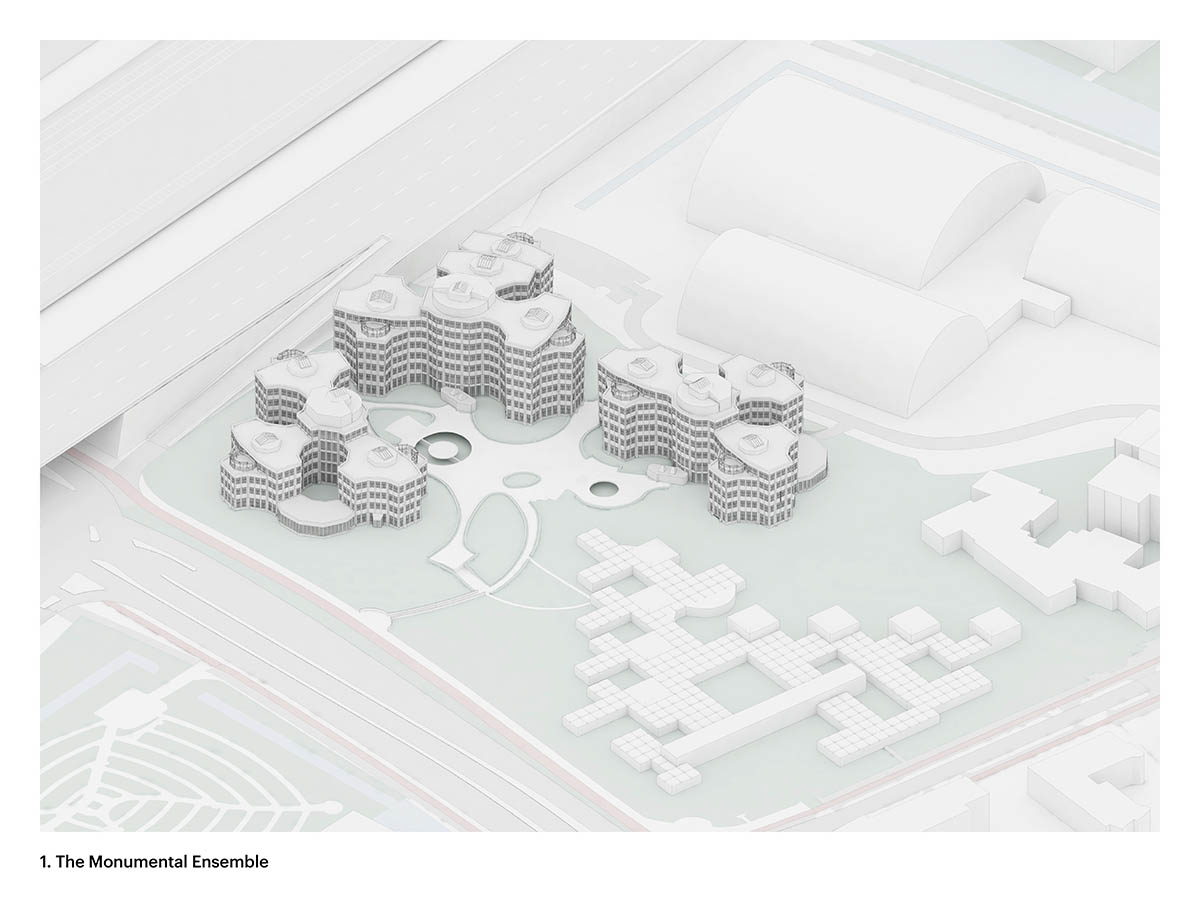 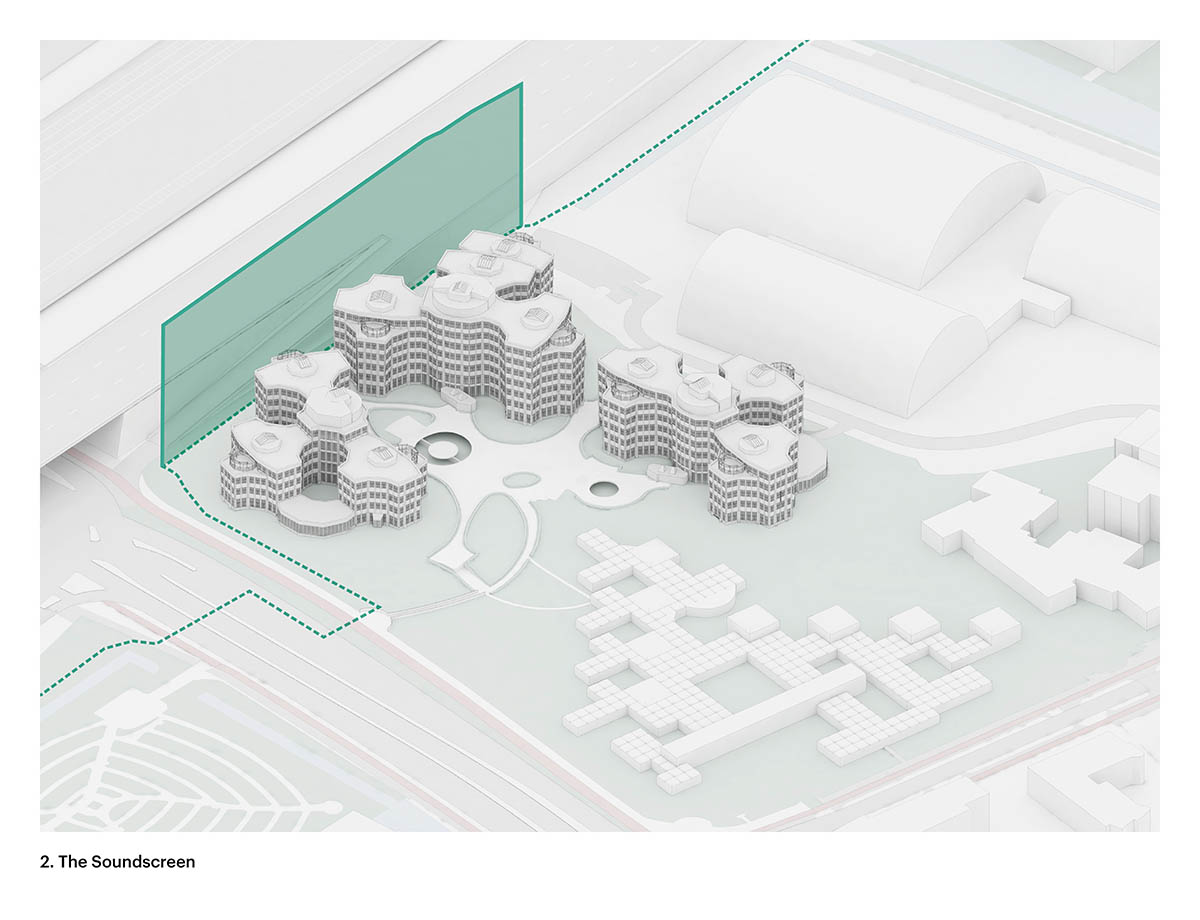 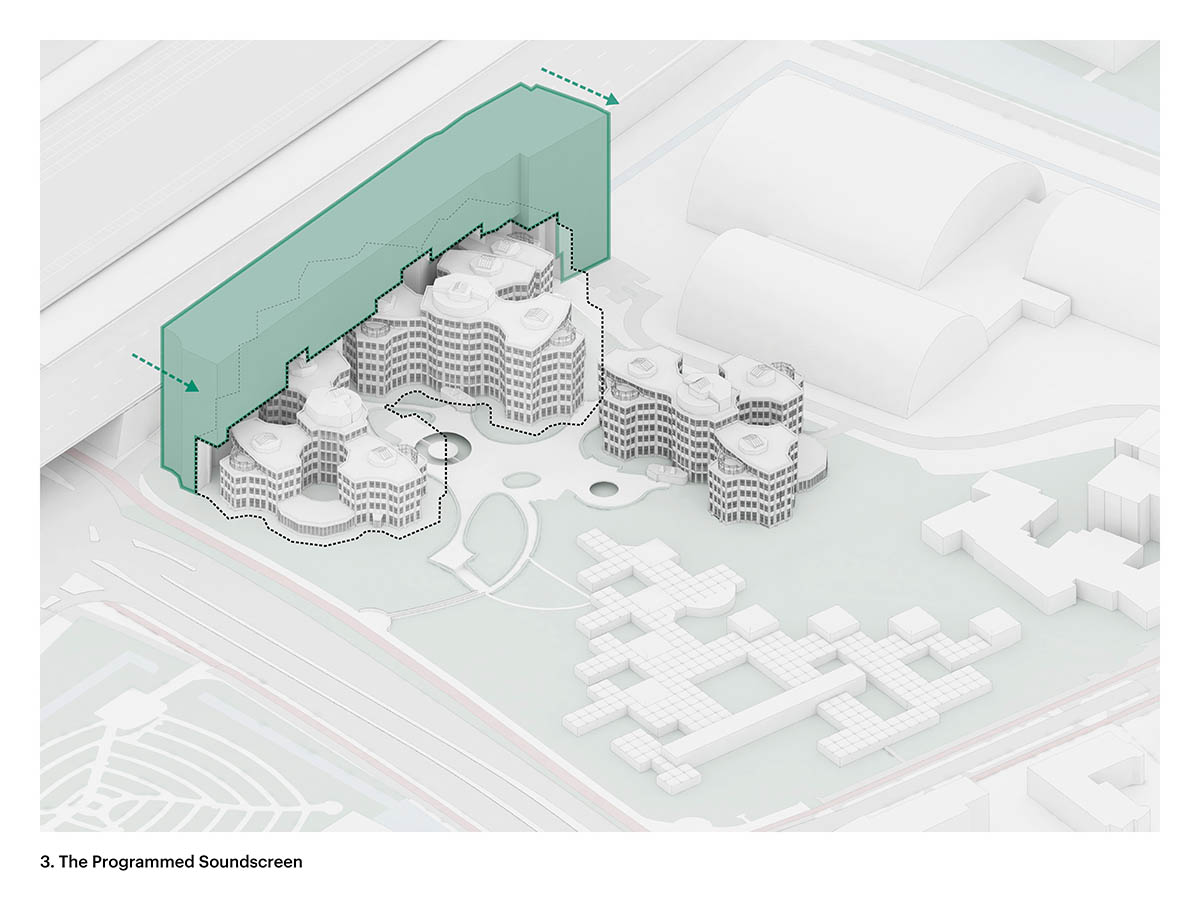 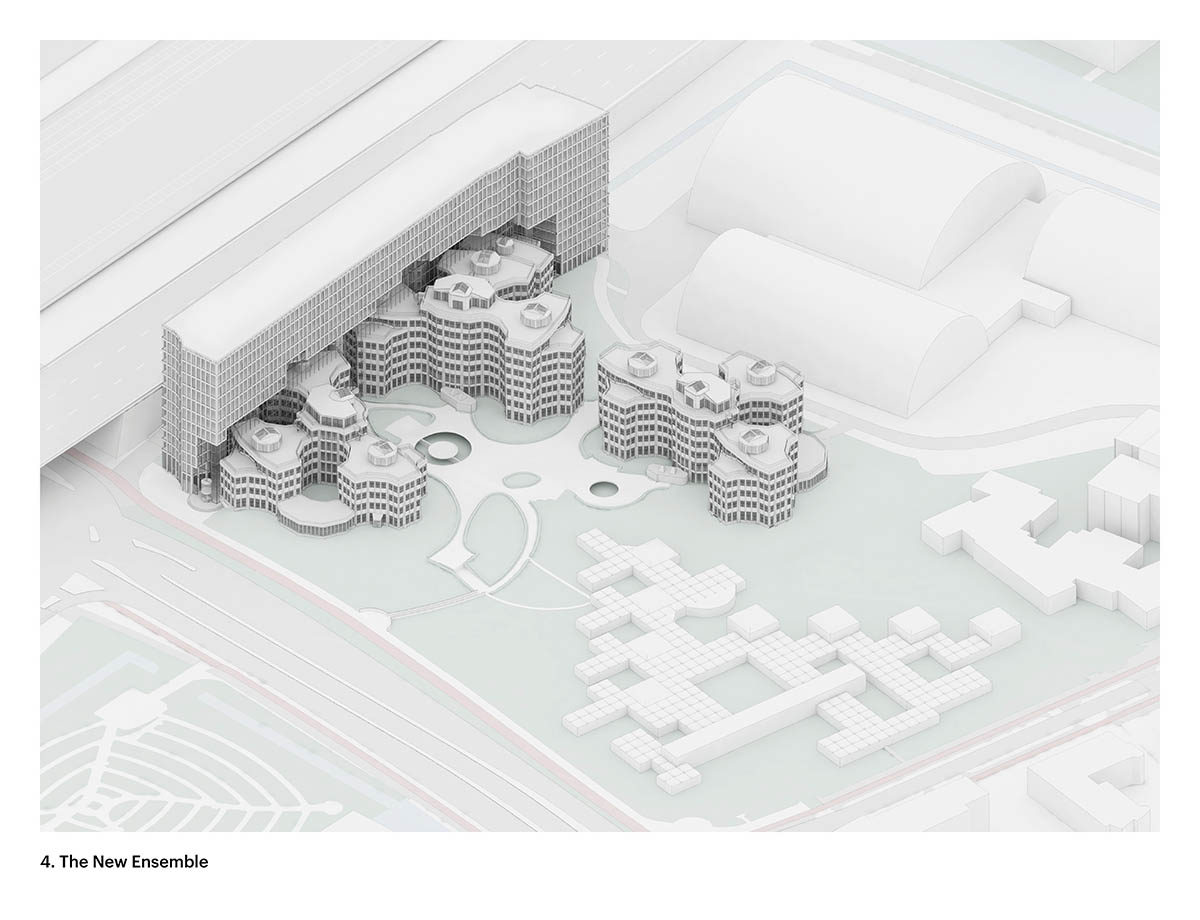