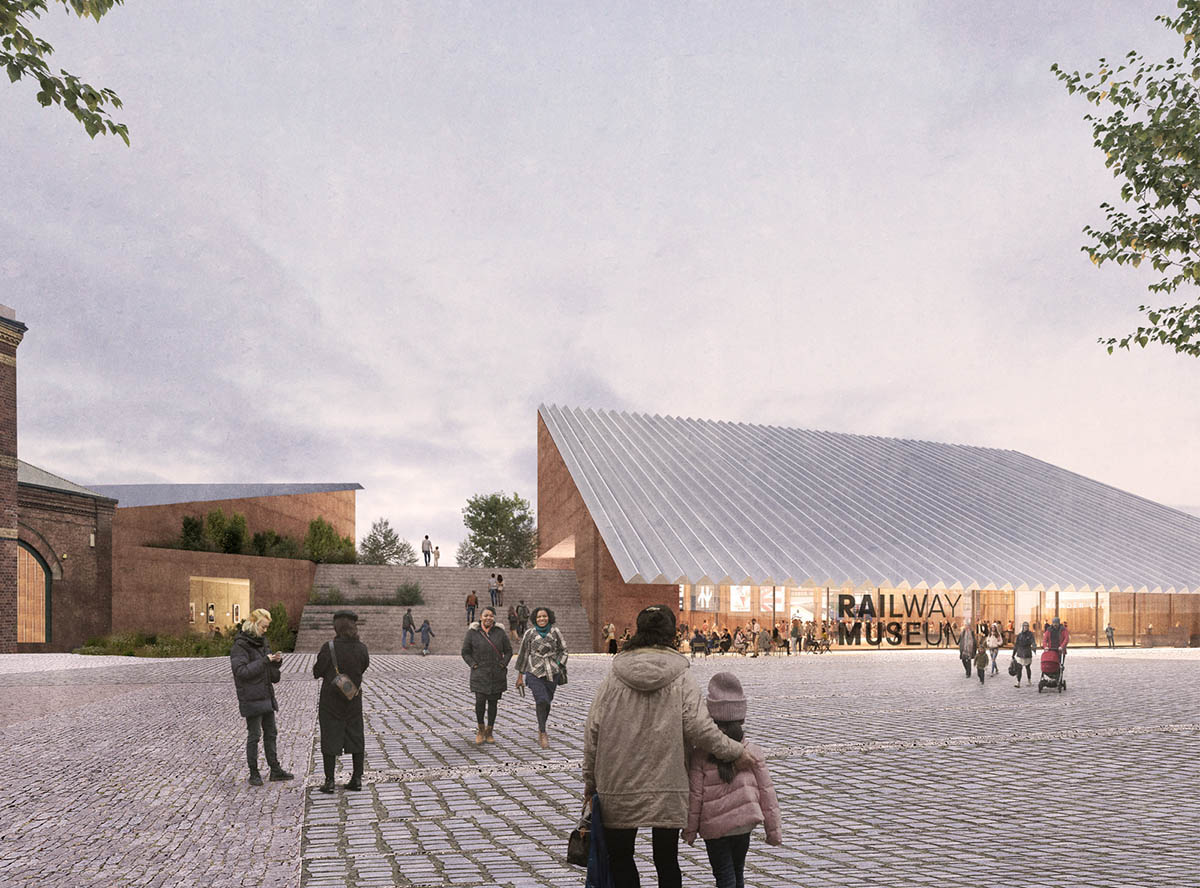 The National Railway Museum and Malcolm Reading Consultants (MRC) have unveiled the five design concepts created by international and UK teams for the museum’s emblematic new Central Hall. The shortlisted teams were announced in late November 2019.

The five shortlisted temas have released their designs for the competition. The designs by emerging star practices are now available to view on the competition website and at a free public exhibition in the National Railway Museum’s Great Hall, which will run from 13 February to 29 March 2020.

Members of the public are invited to share their views on the five proposals until Sunday 23 February — by filling out a comment slip at the exhibition or by emailing the competition organisers.

With a construction budget of £16.5 million, the new Central Hall will transform the visitor arrival experience with an appealing and compelling entrance space, integrating the museum estate for the first time in its history. This 4,500-square-metre centrepiece building will also create a spectacular 1,000-square-metre gallery intended to showcase innovative technology and introduce the museum’s world-class collection.

Central Hall will open in time for the museum’s 50th anniversary in 2025. The initiative will enable the museum, which aims to become the ‘world’s railway museum’, to welcome an estimated 1.2 million visitors annually, as well as renew its presence and identity as it becomes the cultural anchor for York Central, one of the largest city centre brownfield regeneration projects in the UK.

Competition winner will be announced in March 2020. 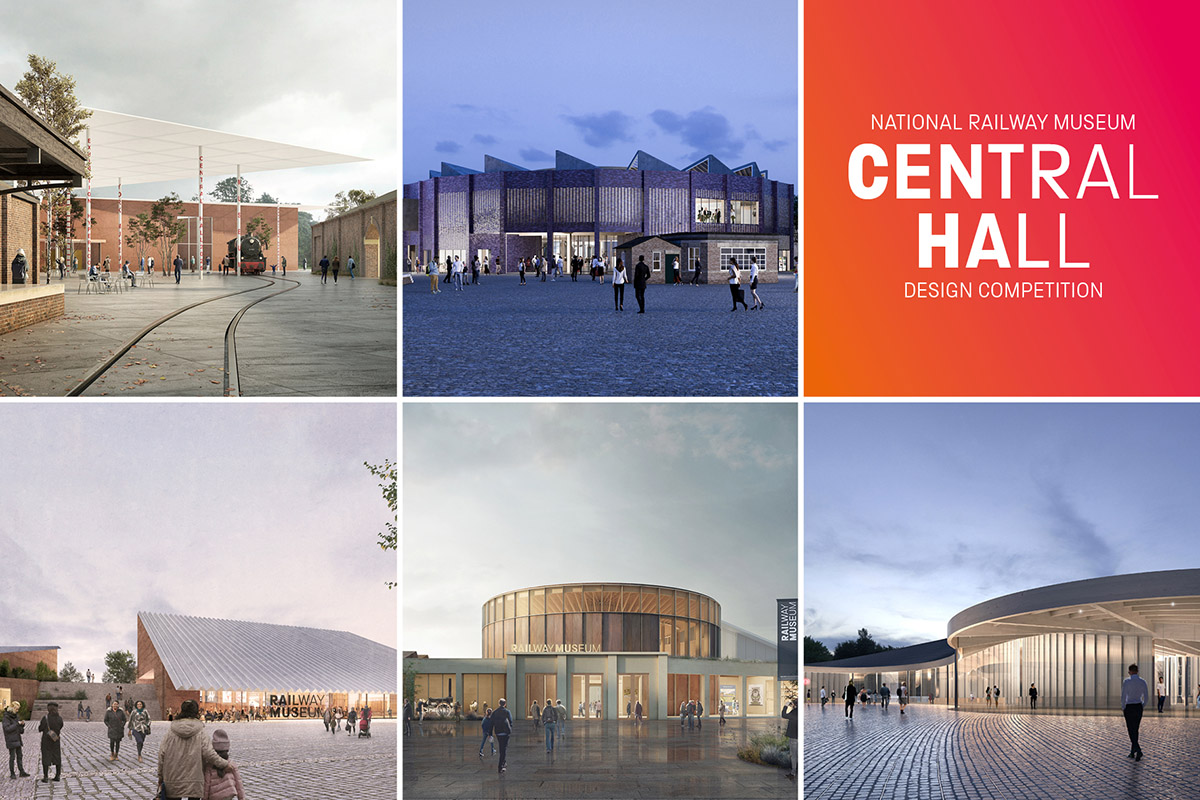 "I am very pleased to share the five design concepts for our new Central Hall which will showcase our collection and future innovations from the rail industry in an inspirational, purpose-built gallery," said Judith McNicol, Director of the National Railway Museum.

"I encourage people to visit and to share their feedback. Although the final designs are some way off, the winning team will go on to create the final building which will be the cultural focal point at the heart of York Central."

"The five teams were responding to a brief that included a need for Central Hall to be environmentally sustainable as well as sensitive to the railway heritage of surrounding buildings and the city of York," stated MRC.

The finalist teams were selected from a field of 76 entries by a panel led by Dame Mary Archer DBE, Chair of the Board of Trustees, Science Museum Group. No design was sought at the competition’s first stage —competitors made submissions based on past experience and team composition.

The shortlisted teams then attended a site visit and had three months to develop their designs. Each finalist team that submits a compliant proposal will receive a £30,000 honorarium at the conclusion of the competition.

See the five design concepts with short project descriptions below: 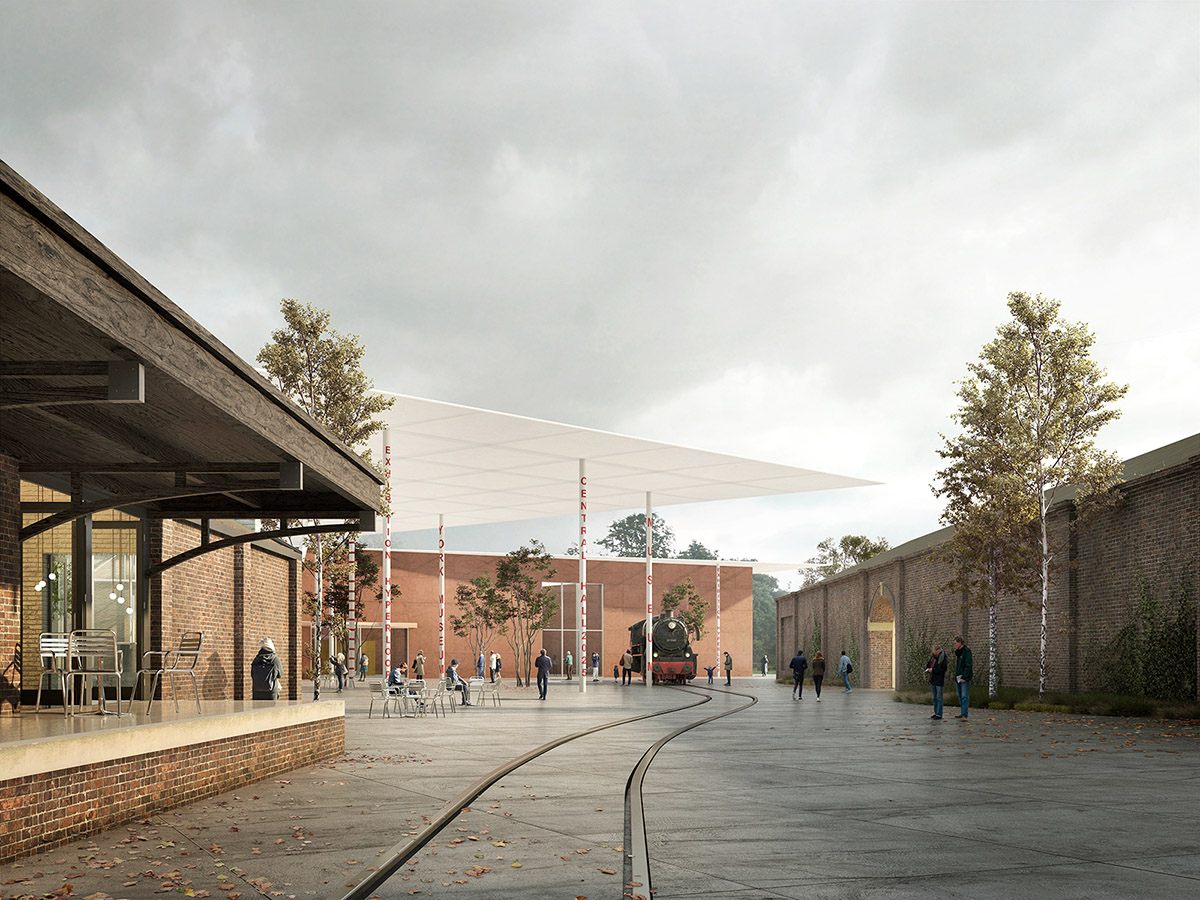 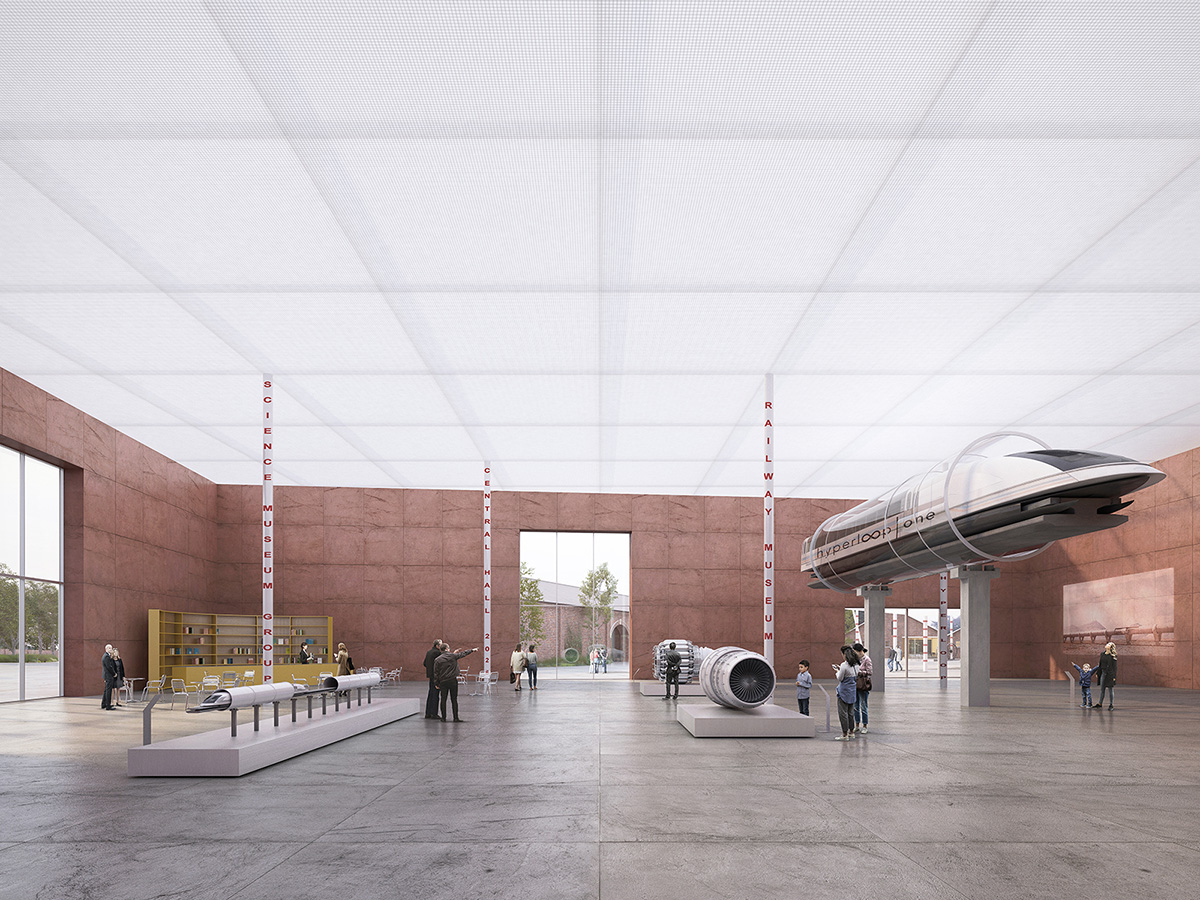 "Two squares, lightly inserted into the heart of the site, form a new centrepiece for the National Railway Museum, enhancing the wonderfully open museum landscape while creating a transparent gateway between town, museum and York Central."

"A 50×50 metre translucent roof covers a new public space for people, artefacts and events connecting all the major elements of the museum. Beside it, a second identical roof covers a new exhibition hall. Red sandstone under the light steel roof defines an open, daylit and flexible exhibition space taking the story of railways into the future. Visitor reception, retail and seating form small informal spaces around the exhibitions. The two new squares, arranged corner to corner, connect Station Hall to Great Hall and to the new exhibition hall. Silcock Goods Shed, at the western corner of the new roof, is transformed into a restaurant activating the threshold to York Central. Future and past are reconnected across the site framing a new perspective for generations to come." 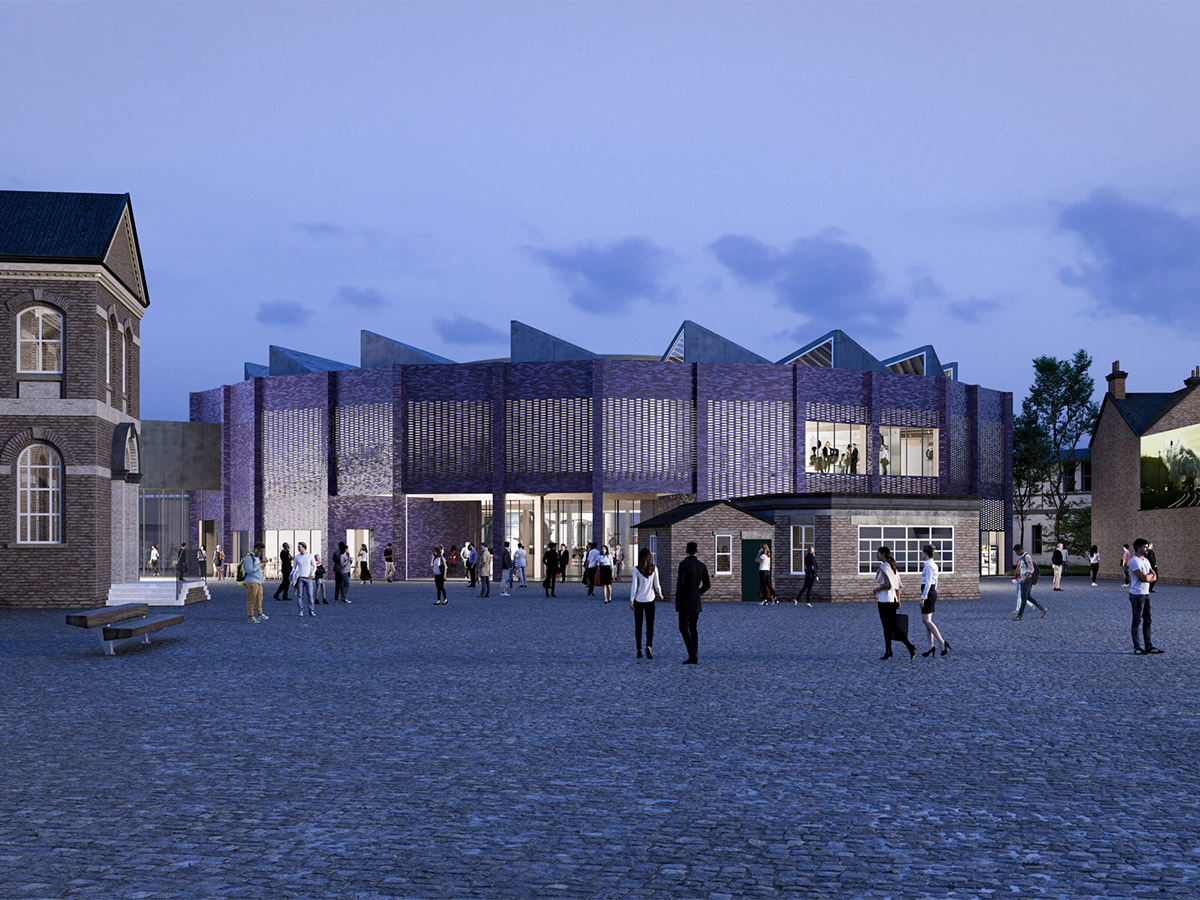 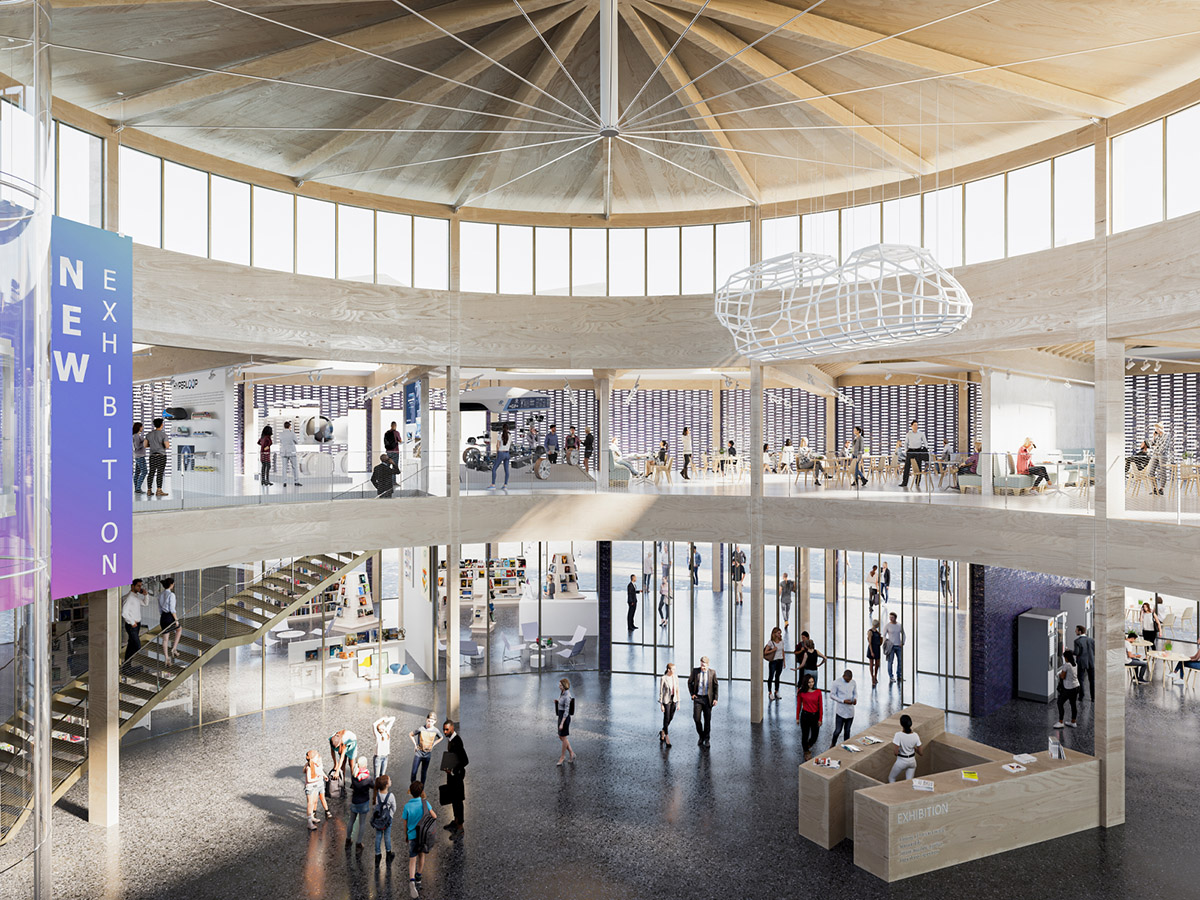 "There is no creation without memory. The new Central Hall sits at the centre of gravity of the buildings that constitute the historic site of the National Railway Museum.

Inspired by a train turntable, it becomes a human turntable. The plan form evokes a huge gear; the roofs resemble the blades of a turbine. The building suggests motion for the public as well as the collections. The building at ground floor is very open: a welcoming shop and café overlook Museum Square.

The orientation space is the first attraction with its triple-height volume and dramatic roof, with the potential to hang exhibits. It directs us to all of the galleries: Wonderlab, Great Hall and Station Hall. A glass lift brings visitors to the panoramic roof terrace offering an exceptional view of the Minster and Station.

The Central Hall becomes a city landmark, a symbol of the future regeneration of York Central." 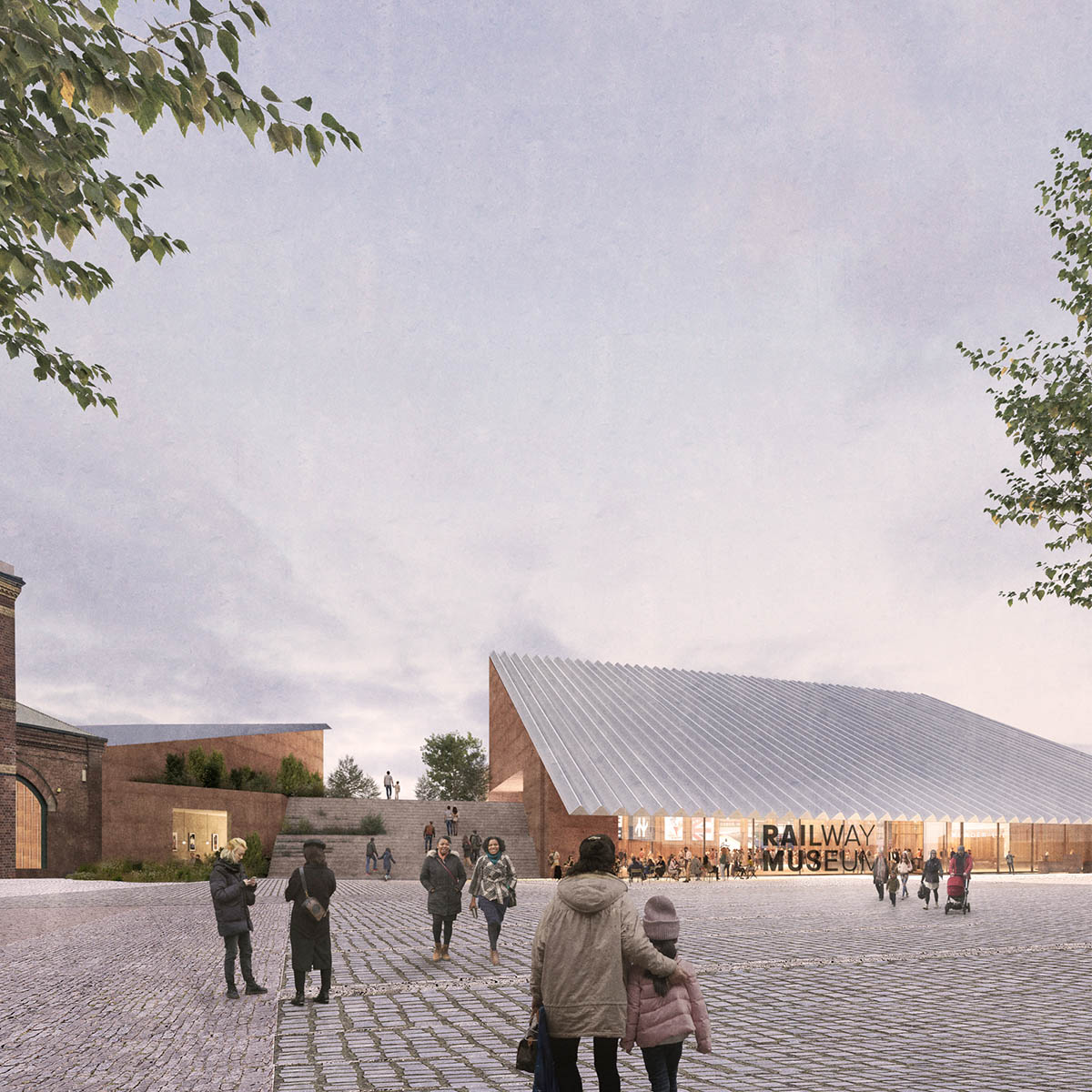 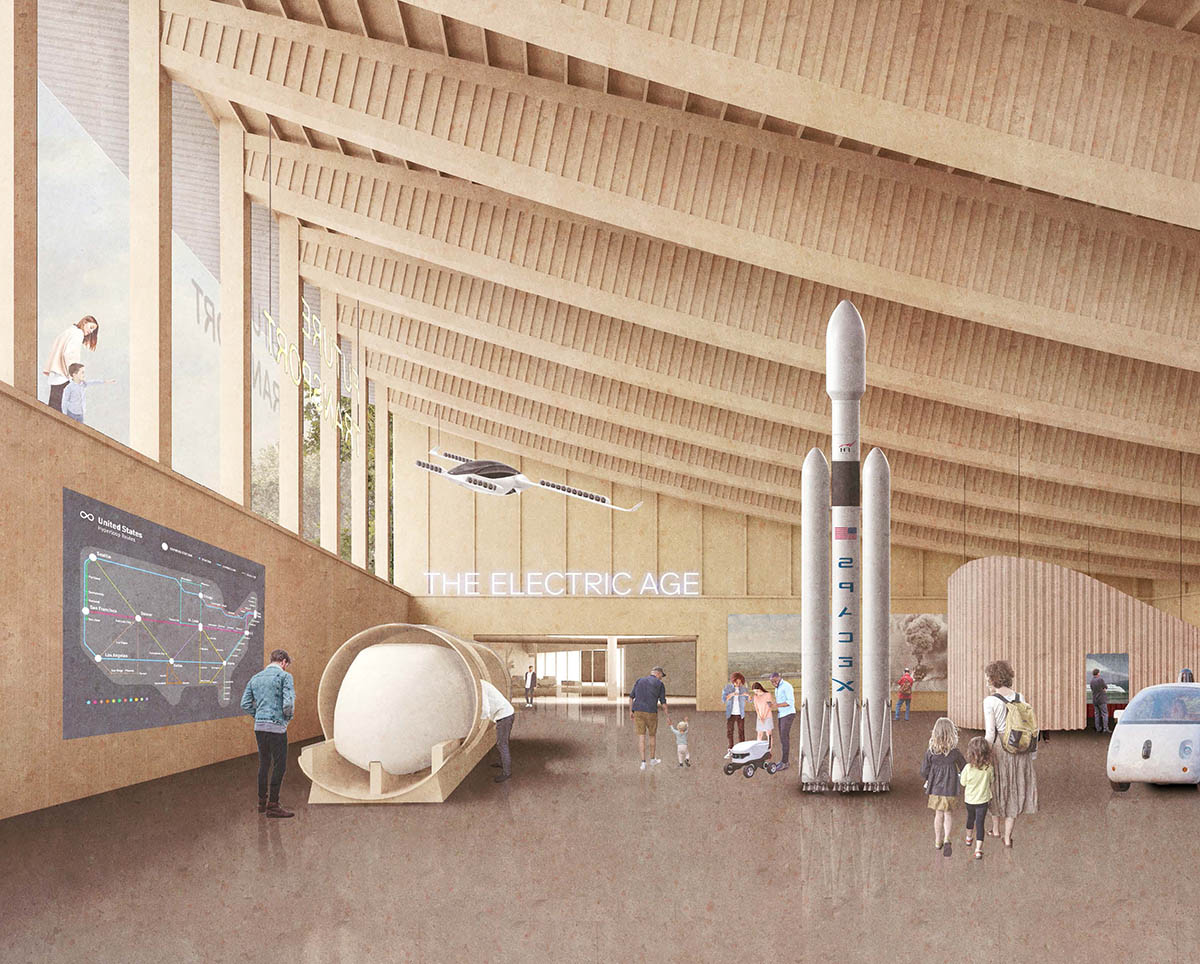 Central Hall provides a generous new public entrance directly facing York Railway Station. Its bold new roof form will rise to the apex of the adjacent Great Hall, creating a Museum identity externally, and vast timber-structured room internally. At the heart of the new space, every Museum experience can be seen from one pivotal point of view. The Future Transport Gallery will also be built as a lofty, column-free space, making it highly-flexible for exhibition formats and rich in material character with timber internally and rammed earth externally.

The project will improve physical and visual connections between old and new buildings, attract visitors to unique experiences of collections and contribute to making the entire Museum a carbon-neutral site." 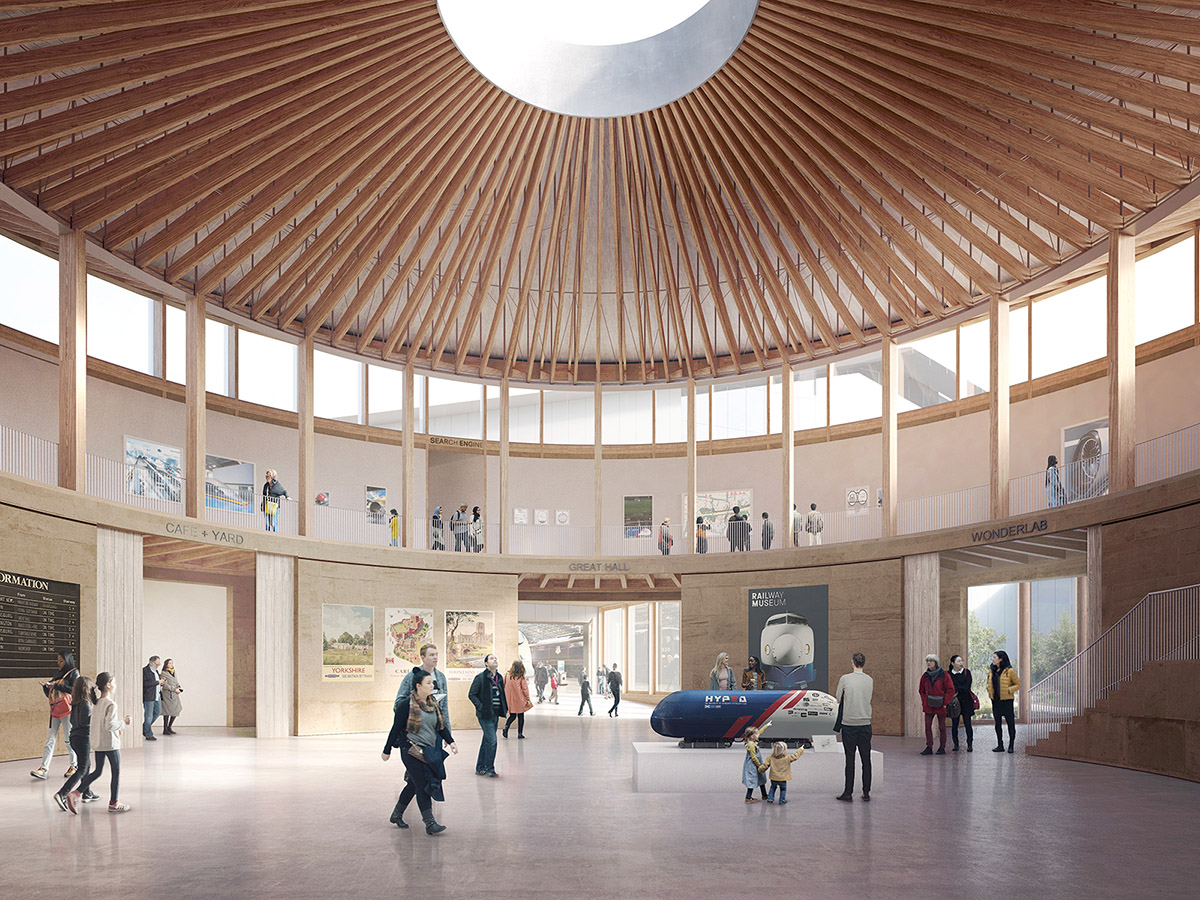 "Our design reflects the spirit of the great railway architecture of the 19th century, generating uplifting and jubilant spaces that celebrate the excitement and reverence for the railways. The design is based on the team’s low-tech philosophy, dramatically reducing our reliance on concrete and steel to lower embodied carbon through a beautifully crafted timber frame structure. A combination of passive design principles and active systems reduce the site wide operational carbon footprint by 80%.

Central Hall rises proudly above Museum Square, referencing locomotive roundhouses and drawing inspiration from the tradition of the world’s great museums with large, welcoming circular halls that inspire curiosity to explore the collections beyond. Balancing the industrial railway vernacular of the former York North locomotive depot and Goods Station, the building creates warm, welcoming and uplifting spaces, dramatically improving the comfort and wellbeing of visitors, staff and volunteers.

As we enter a new renaissance in railway innovation, the revitalisation of the National Railway Museum will have a significant impact on the future of the railways in the UK and beyond." "This design for the new Central Hall seeks to create a dynamic and active space that unites the existing components of the National Railway Museum, allowing them to retain their character, while also creating a new architectural intervention that is at once contemporary and evocative. The Central Hall is porous and transparent, designed to be open and inviting. Its façade opens up to the Museum Square, with cafe tables spilling out activating the new public space.

In the spirit of the railways the new Central Hall is of its time, with a glulam timber structure and curved glass facades that also creates a warm and identifiable interior space. The building form closely ties in to the existing structures, but invents a new and recognisable welcome and arrival that is imbued with the optimism and energy of a 21st century museum dedicated to the railway."